We departed early to Takayama old town to check out the famous red bridge – Nakabashi Bridge. 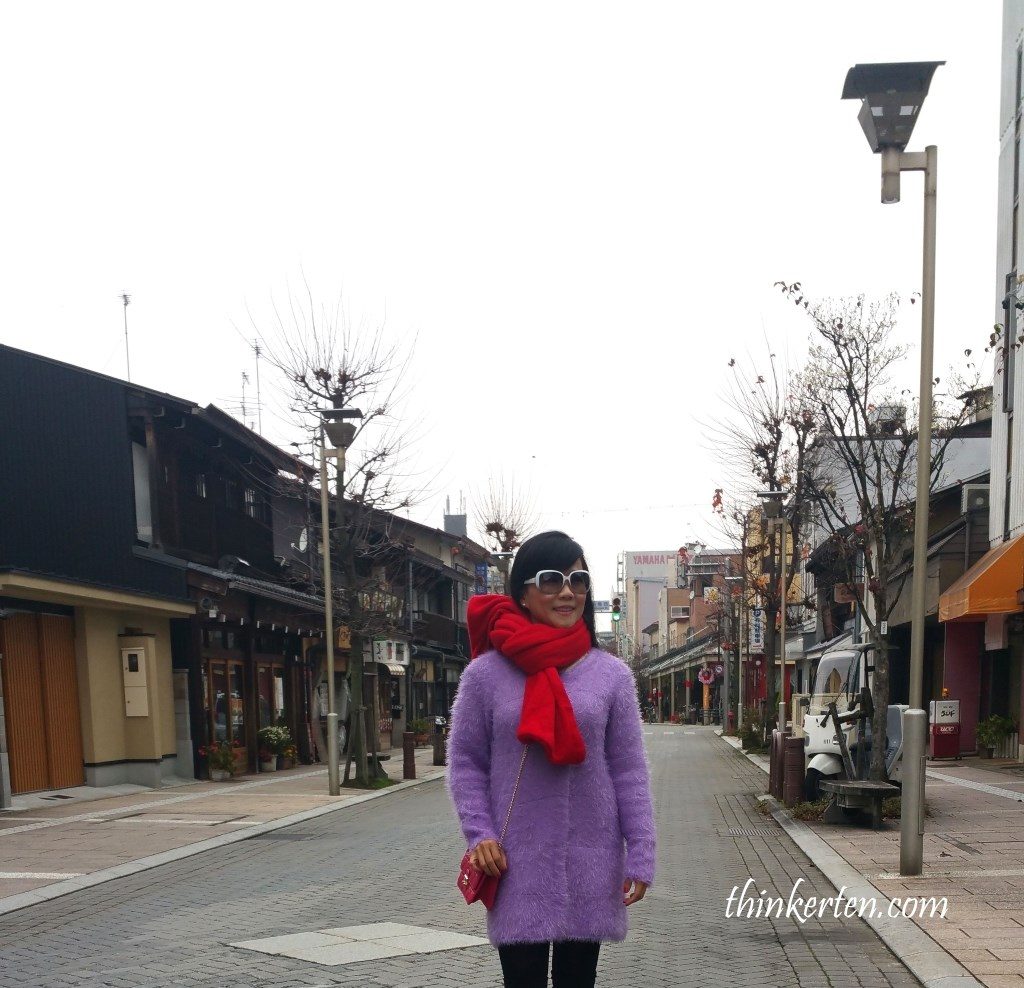 Most shops were still not yet opened and there were not many people yet as it was still very early.  We were lucky to rise early as there were not many tourists flooded this beautiful bridge yet.  It was very nice to walk along the red bridge and admire the ancient building in the other end.  It is the entrance to the old town. 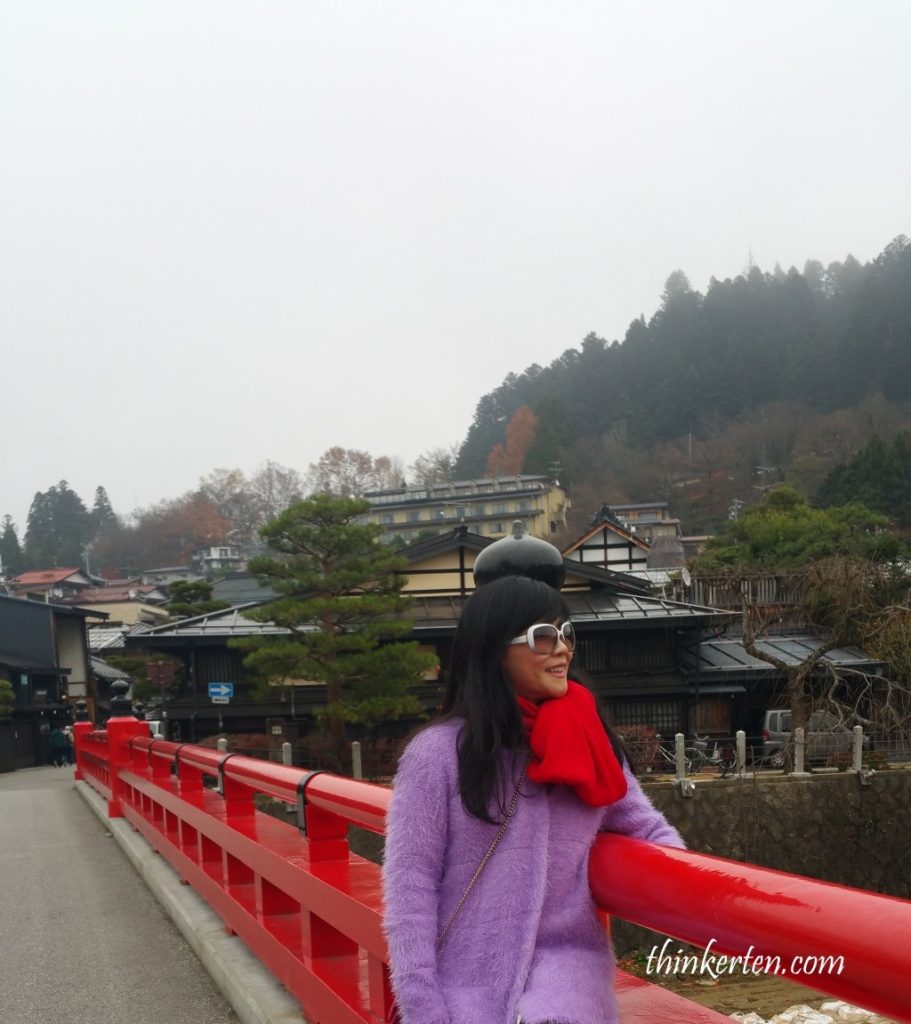 I heard the Nakabashi bridge in winter is very beautiful, covering with snow.  Just imagine the red color of the bridge and the white snow make a very big contrast.  We were there in end of November, still no luck for the snow yet but the bridge is still looking very pretty. 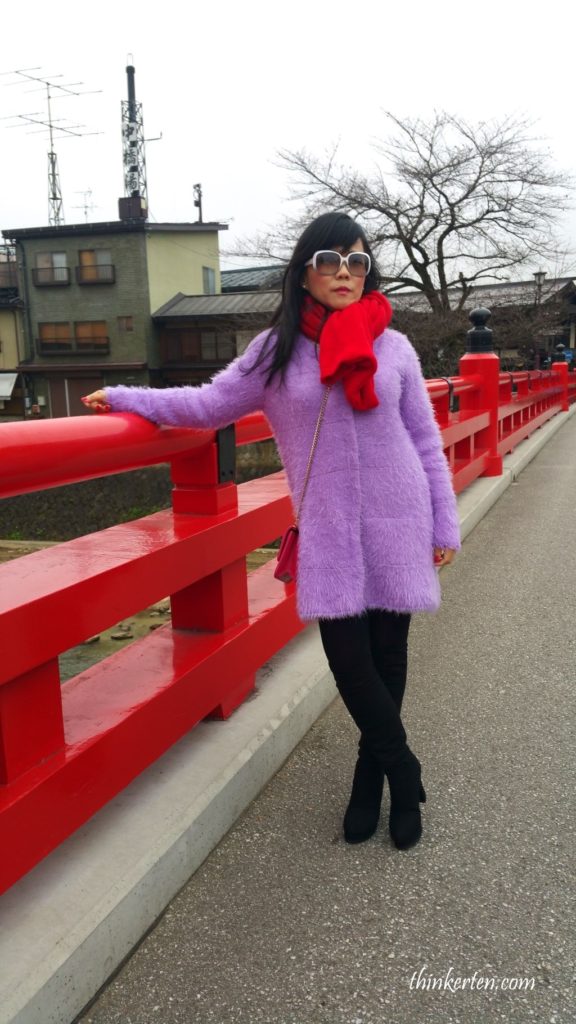 There water in the river looked very clean and clear. You can’t spot any litter in it.

Great photo opportunities only if you go very early in the morning.  Tourists started to flood in after 9am and you will not have a chance to take good pictures.  Also the bridge can be very busy during the day with more traffic.

We were walking into the old town and enjoying the great atmosphere of old Japanese time.  These stones wall covered with moss were quite high, like ancient samurai time.

Ogimachi is Shirakawa-go’s largest village and main attraction.  We arrived at Ogimachi at around 10 am from Takayama city, about 1 hour drive.  Shirakawa-go was declared a Unesco world heritage site in 1995.  The village is famous for the 250 years old traditional farmhouses – in Japanese is called “gassho-zukuri” houses.  “Gassho zukuri” means houses resemble palms placed together and fingers pointing upward in prayer.

I noticed the unique features of the houses is the steep roof, about 45 to 60 degree, very big roof top. No nails or other metal materials were used to build these “gassho-zukuri” farmhouses.

In winter, it make a great picture as the snow will be accumulating there.  It was a sunny day when we arrived in Ogimachi, Shirakawa-go, no snow, which was lucky to me because I don’t quite like snowing.  But I heard from the Japanese news on television, it was snowing heavily 2 days after we left, the whole area were covered with very thick snow.

Some of the farmhouses were opened for public so we went in to have a look.  Some were used as guest house.  These were the “yukata” used in guest house.  Yukata is casual version of Kimono, normally make from cotton and usually wear in summer.

We were not adventurous enough to try out the guesthouse in Ogimachi, too “inaka”/countryside for us.  We were more pampered with heater and comfy bed in the hotel instead.  But staying overnight in Ogimachi definitely a good experience as I heard from friends, you could see beautiful sunrise early morning and the view is just spectacular. 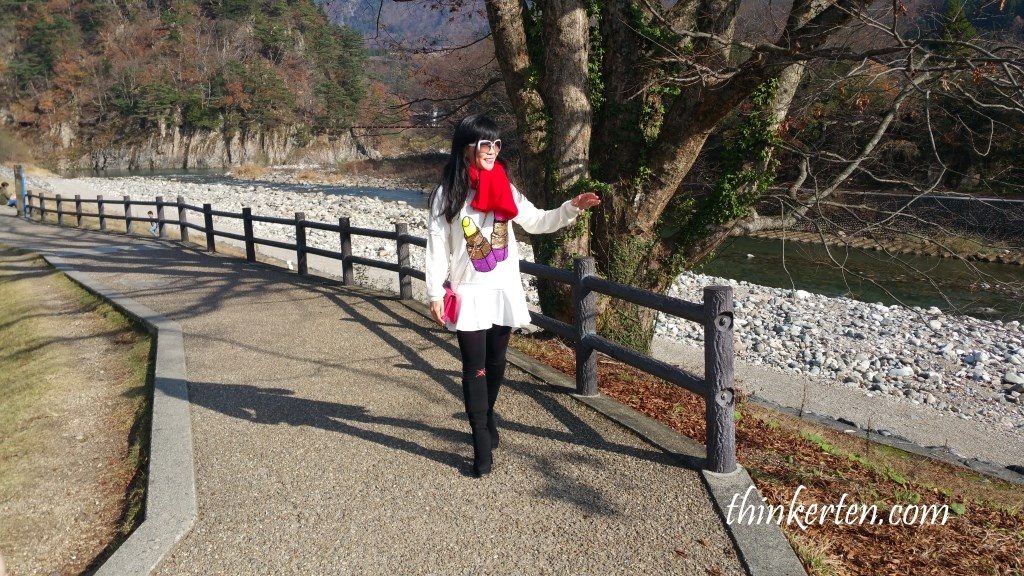 This place is surrounded by mountains so it was really a good view from afar. 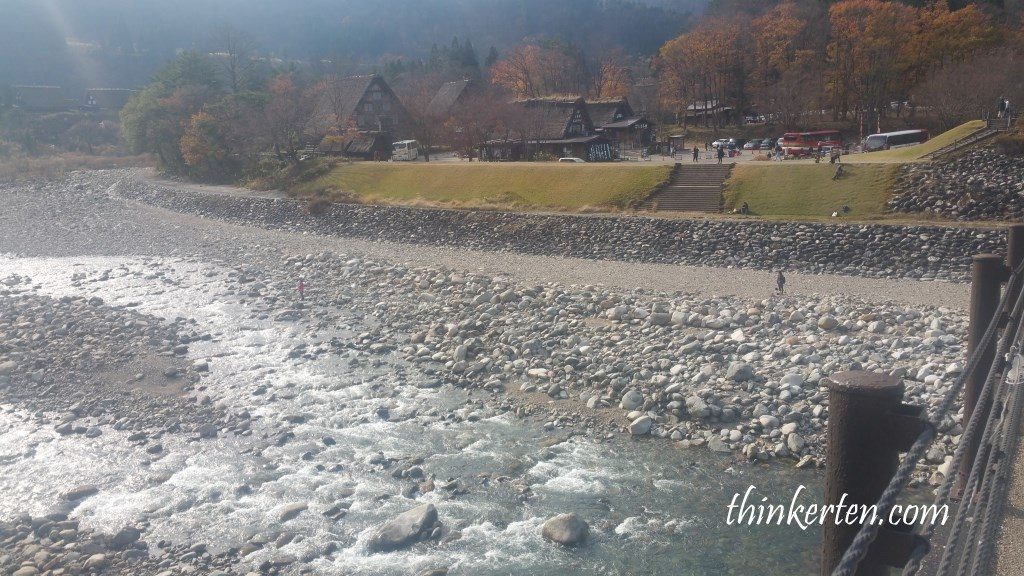 I heard there are some locals still staying in this village, may be they are the restaurants owners or guesthouse owners?

Only about 600 people living in this village now.  Some of the farmhouse also turn into a museum for tourist to go in to have  a look. 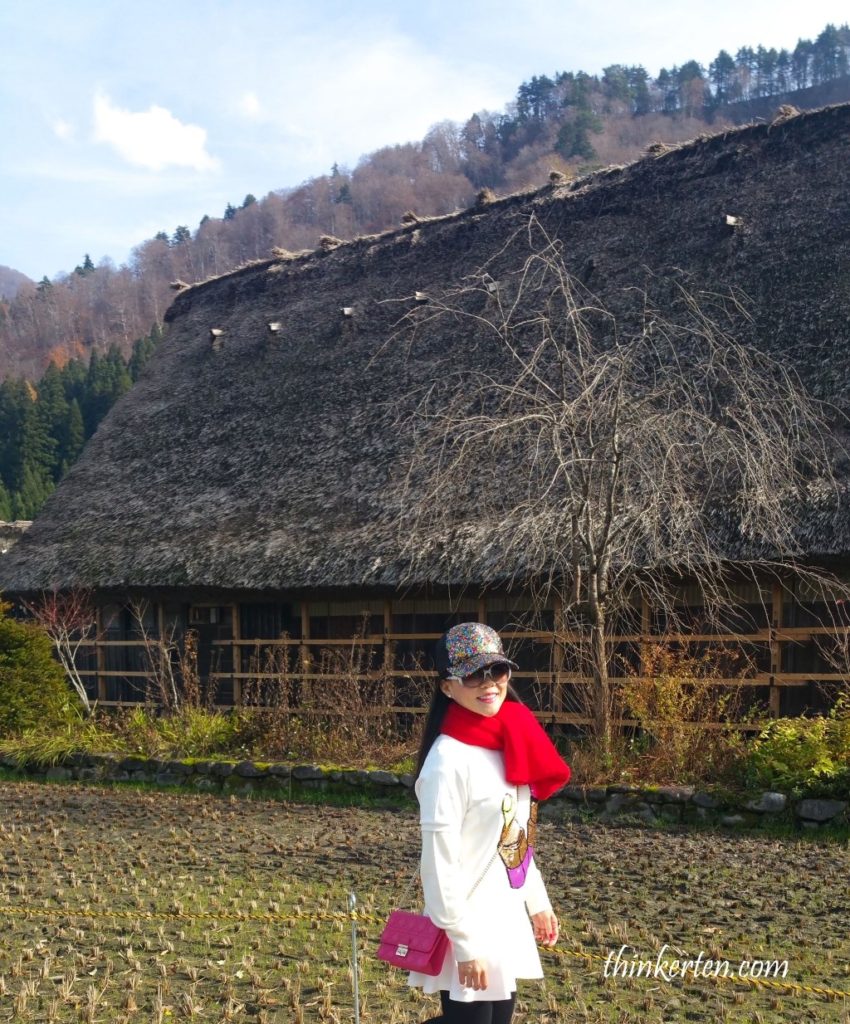 Inside the Museum we saw the gassho-zukuri/farmhouse construction, it also display primitive tools and implements used in farming by the villagers.

I went into this souvenir shop to have a look but did not find anything that interest me to buy. 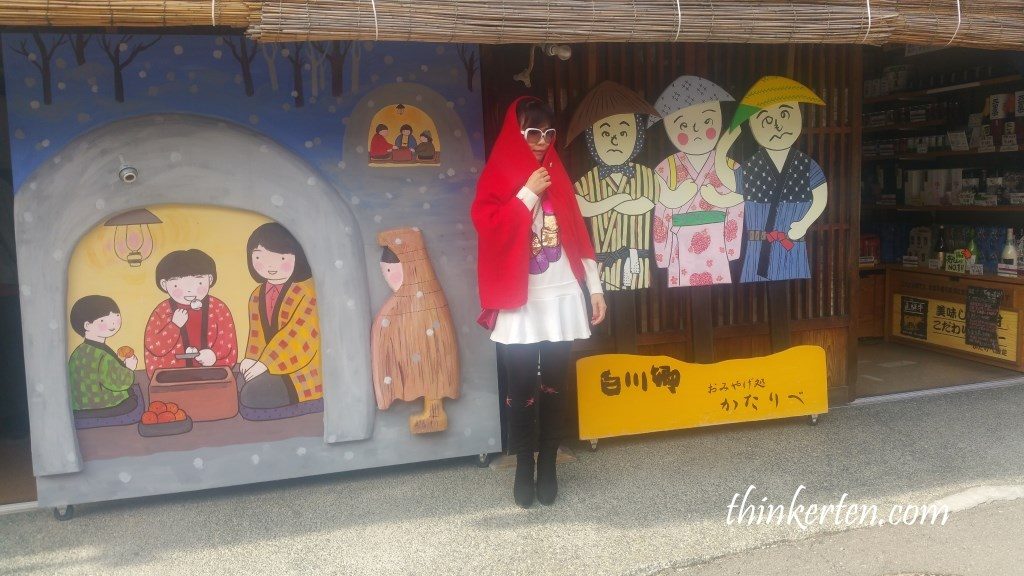 Spot some “kaki”/persimmons hanging around the leaves-less tree.  These persimmon are in oval shape.  A wave of nostalgia swept over me when I looked at these persimmon tree, thinking back those cold autumn I spent alone in Japan in my University life.

We had handmade soba and Udon in one of this farmhouse restaurant, we were lucky to eat early and be able to avoid the long queue. 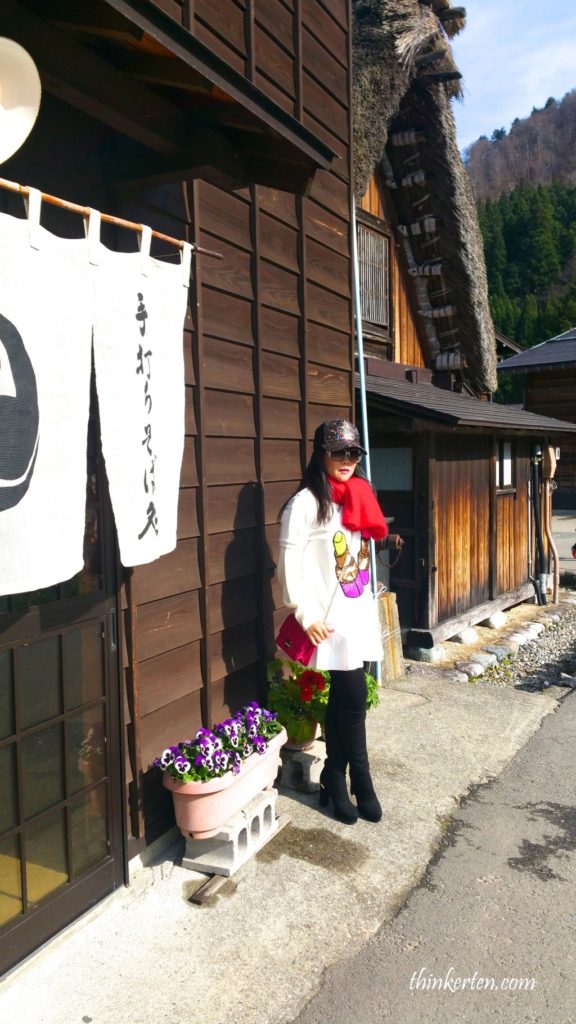 One of the order we had is “kitsune” udon, it tasted delicious, probably due to the cold weather.  Kitsune udon is the dried tofu pouch and it tasted very sweet but went very well with the saltish soup and udon noodle.  Kitsune in Japanese means Fox, why it is called Kitsune Udon, it is because according to legend, the fried sweet tofu is the Fox favorite so it is called Kitsune udon. 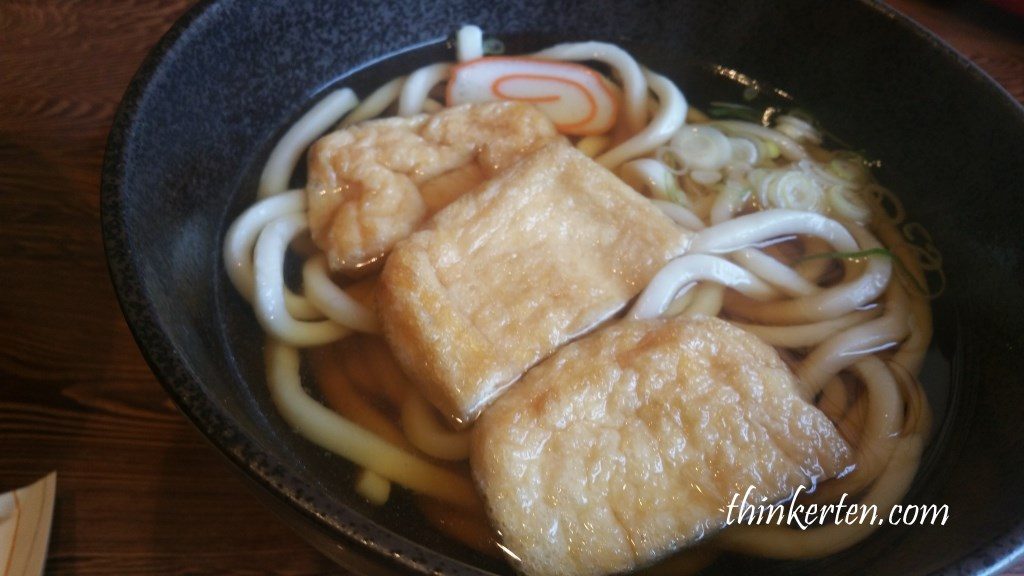 There were few scarecrows in Ogimachi and I choose to take picture with this male scarecrow.

We rested again in one of the coffee house before we made a move to our next destination.  I simply enjoyed blue sky, white clouds, traditional farmhouses, mountains and river in Shirakawa-go with a lovely sunny day in early winter. 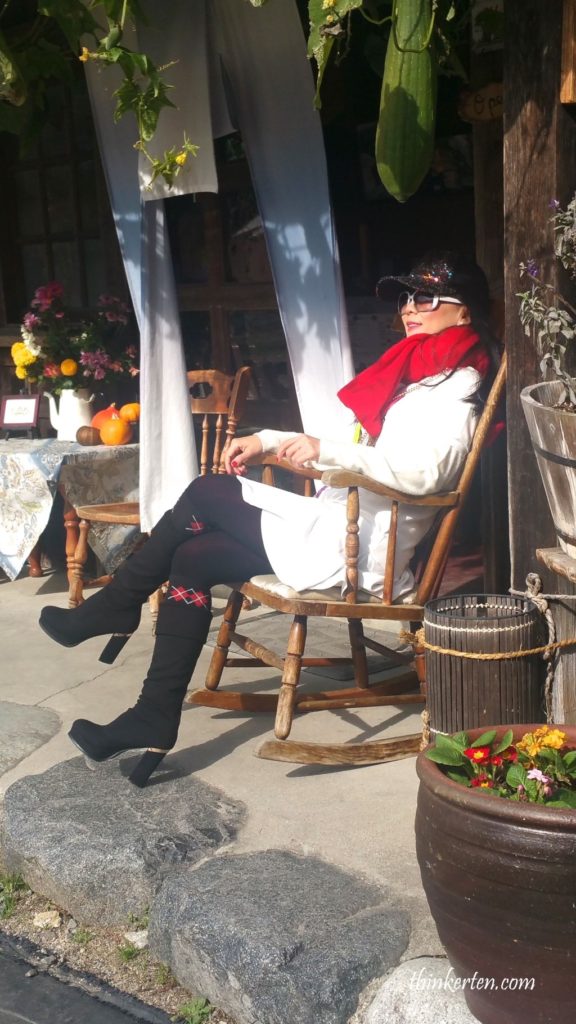 There is a huge car park outside the village, we were lucky and able to get the parking space when we arrived at around 10 am.  However when we were on our way out, I saw the car park was so full and long queue for cars to get in the car park.  Reach Shiragawa before 10am is my advice, else you ended up stuck in the car and waiting for hours to get a parking space.

When we arrived in Tonami, we went for the Inami wood carving museum because we knew visitors can join the wood carving lessons which are open for public.   However, to our disappointment, the wood crafting classroom was not opened so we just went in the museum to admire the art pieces.

There are about 200 sculptures on exhibit, made of various woods.  Traditional Japanese arts such as lion masks and “Tenjin”/Japanese Gods are on display, and also various wood carvings which we can touch.  I can see some of the best carvers and carvings in this country from this museum.

Before leaving the museum, I took few last shots together with these “Tenjin”/Japanese Gods displaced outside the museum. 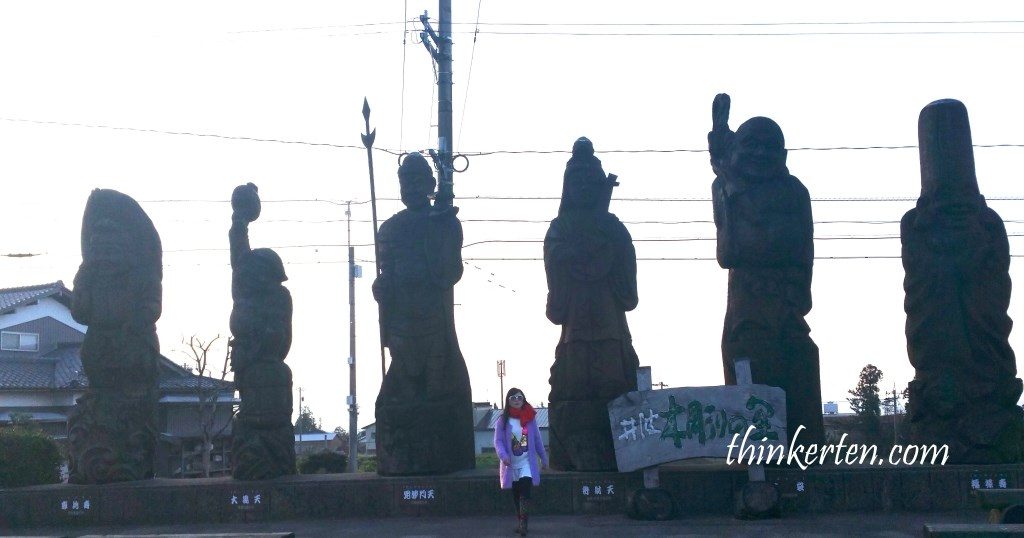 I love this hotel simply it was located in the mountain with a lake view and situated in countryside.  We were lucky to have a rental car so we have the luxury to explore the beautiful countryside of Japan. 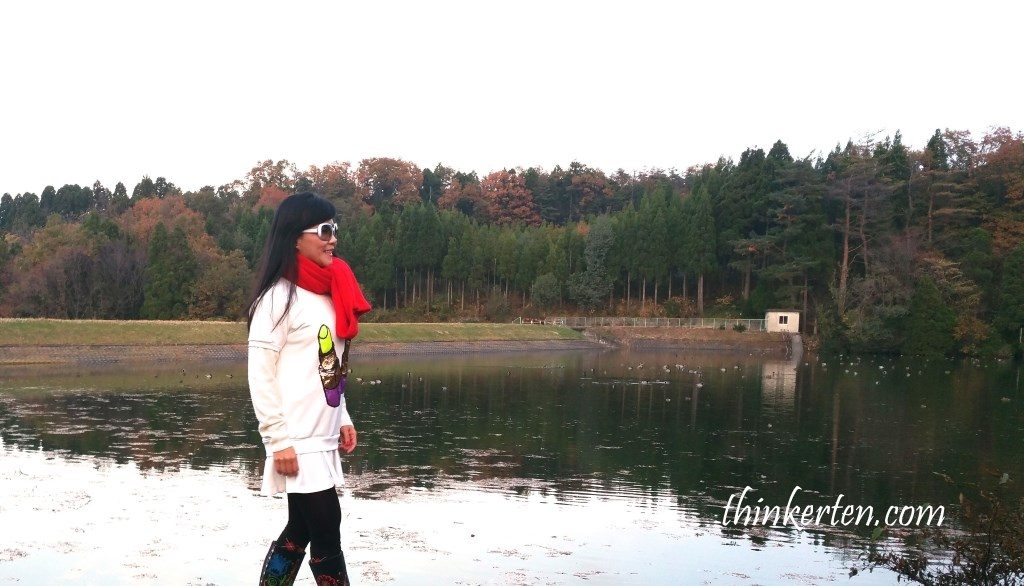 Some ducks swimming happily in the pond, making a beautiful picture for the evening. 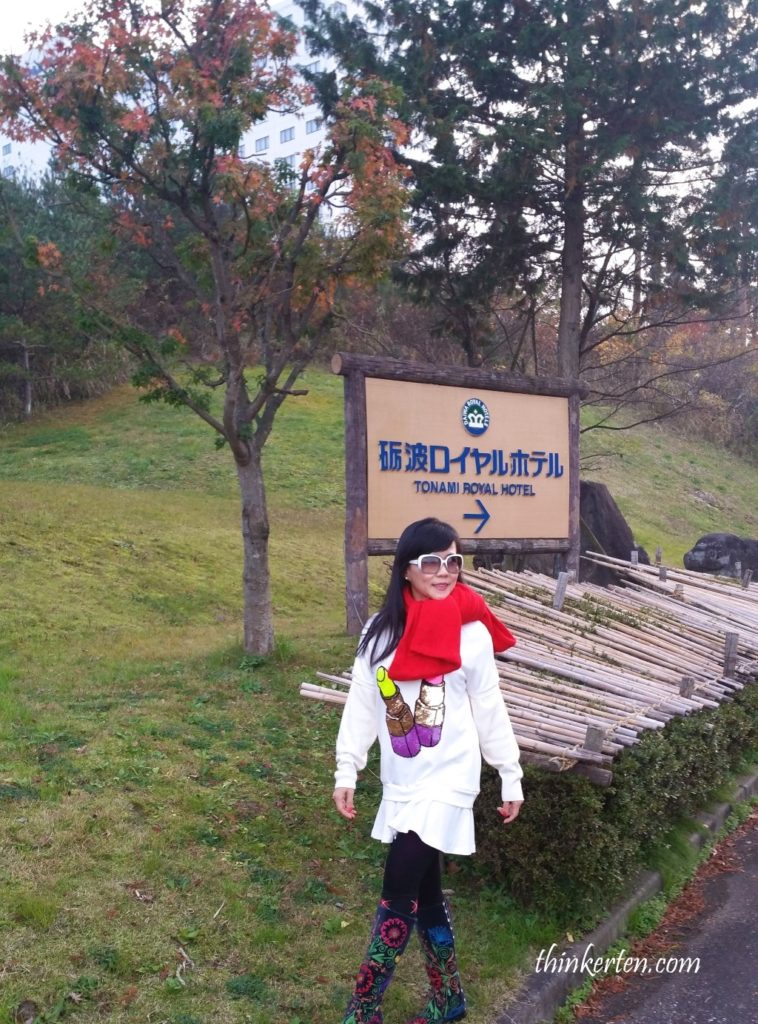 This is a big hotel with very big lobby and large souvenirs gift shops selling Japanese “omiyage”- souvenir.  It is kind of an obligation or should I say a tradition for Japanese to bring “omiyage” back after visiting certain place they traveled.  So “omiyage” is a big business in Japan.  The difference between souvenirs and “omiyage” is “Omiyage” is not something you buy for yourself but to others, such as colleagues or neighbors and relatives and friends.   We bought few Japanese snacks wrapped up in beautiful wrapping paper to give to our neighbor who looked after our dog for 8 days.

There is also a small church next to the hotel, mainly because young couples came here to have their wedding ceremony.  It is just beautiful and convenient. 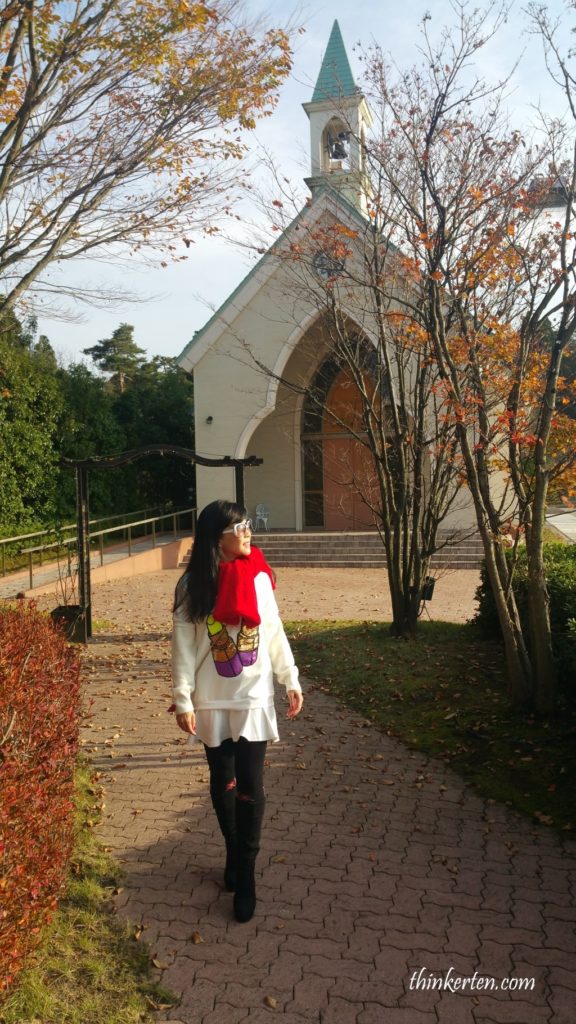 We bought our dinner from a local supermarket and had our dinner in the spacious hotel room after our hot onsen.  There were variety in our dinner,  we had fresh raw oysters, winter crabs, fresh sashimi salads, squids and cucumber vinegar salads, oden, toriyaki/chicken in sticks, tomagoyaki/fried eggs and some carbs, such as inari with rice and sushi roll. 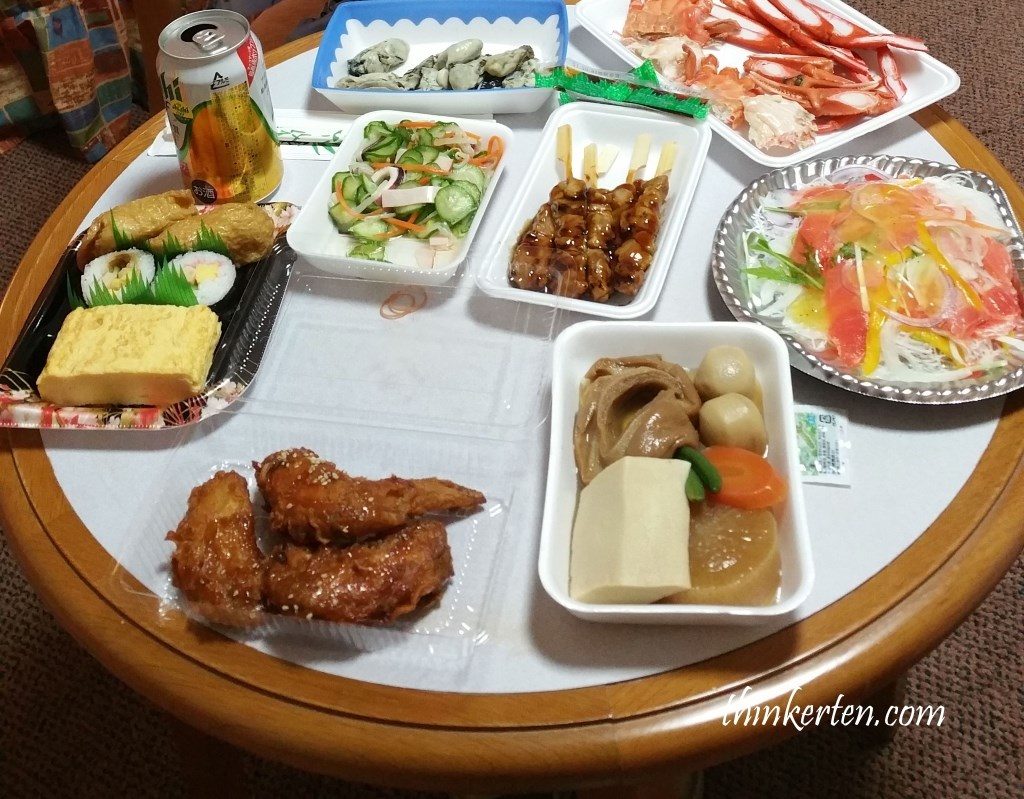 It was one of the best hotel I stayed during my 8 days in Central Japan.

Purchase ticket online for A Day in Shirakawa Village and Takayama

Why you should visit Hiroshima, Shikoku & Kansai...