Today we headed to Poland.  I have a Mongolian friend living in Poland but she is living in Warsaw, the capital.  She is one of my best buddy in University in Japan.  It was ashamed not able to meet up with her since I was in Poland.   Krakow is in the southern part of Poland and it’s near the Czech Republic border.

From Prague to Krakow is about 6 hours.  Today we were travelling almost whole day in the coach.  It was a sunny day with blue sky but quite windy. The coach stopped for some gas and we had a break in the freeway rest area.

There is always toilet charges to enter the washroom in Europe.  We normally paid around 1 Euro to use a clean washroom.  In some shops, especially in the freeway, we needed to purchased a slightly higher cost, usually 2 to 3 Euro ticket to enter the washroom.   Once you entered the washroom, there is a machine which will return the remaining Euro in voucher form for you to spend in the shop.  If you do not spend the remaining ticket voucher, then you were paying 2 -3 Euro for the washroom.  I normally spent on drinks and snacks, of course in many cases, I have to top up the remaining voucher.  I think this system is quite smart to make the customers spend more in their shops once we used their washroom facilities. 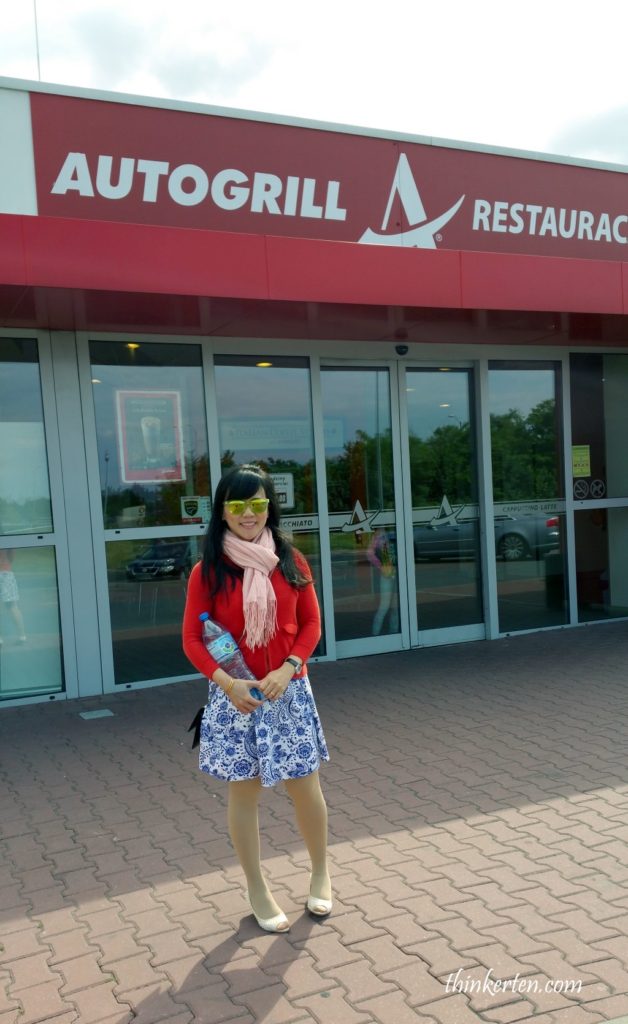 When we arrived at the Salt Mine in Krakow Poland, it was almost 5 pm. A Polish female guide explaining in fluent English throughout the whole salt mine trip.  The mine is visited every year by over 1,000,000 tourists from all over the world. 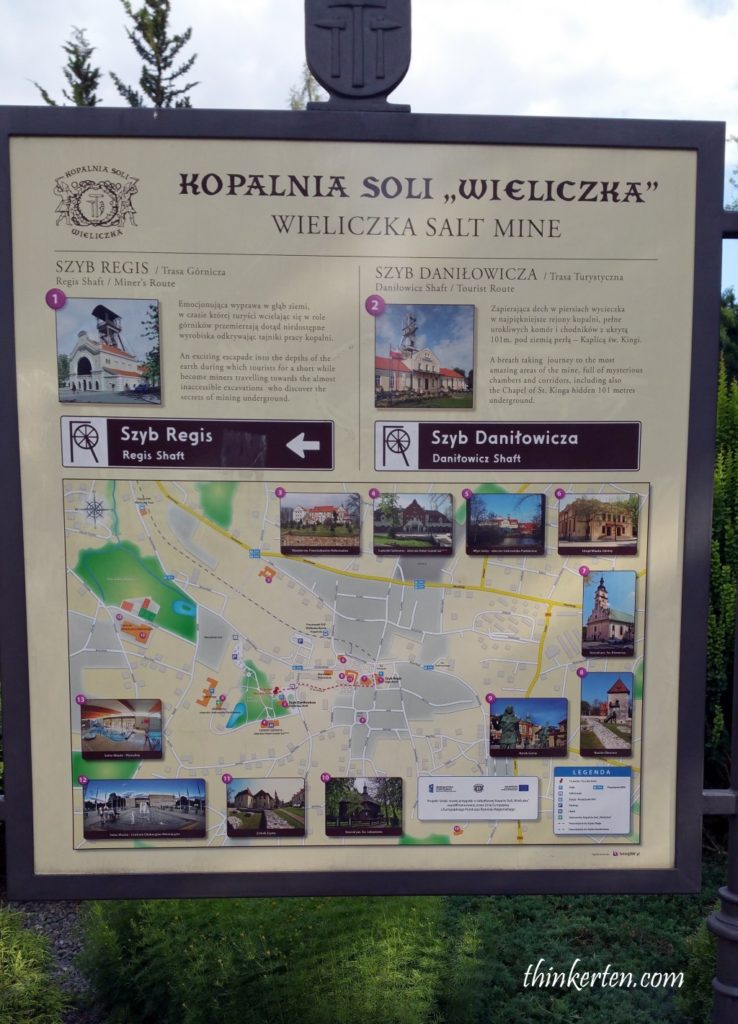 First, we have to go by a wooden stair few hundred steps down to the first floor.  It was quite challenging for the old people but there is handle for you to hold on to.  It was lucky to learn that we will come up by lift on the way out.  First level was 64 meter deep as shown in below picture. 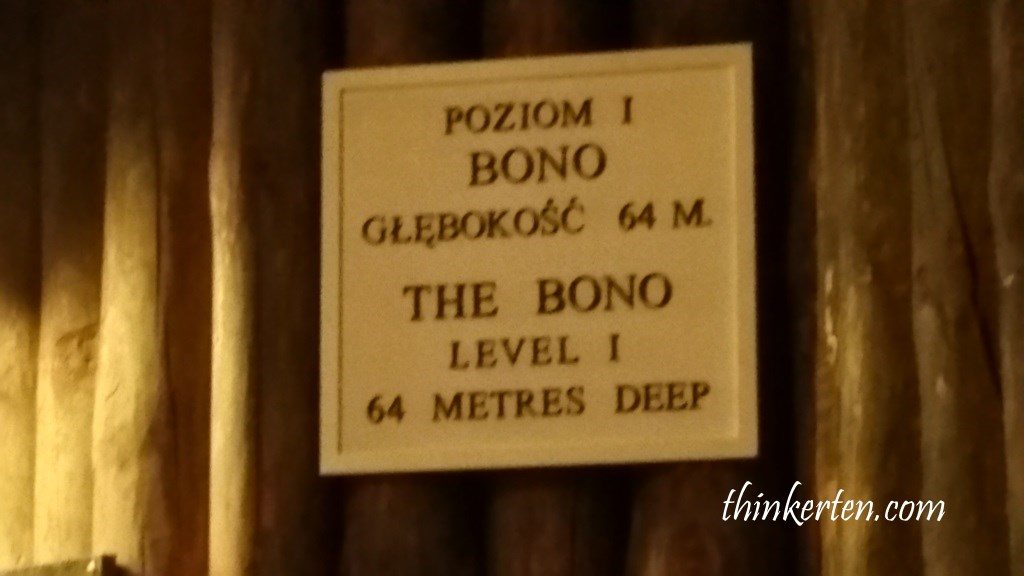 It is quite dark when you reach the bottom but there are some dim lights. It was a 2 hour tour, the guide explained everything in details.

The mines has been in operation since 700 years ago.  Long time ago many people wanted to work here because the pay is very good but the job is very dangerous.  Unlike coal miners, this is a lot better because the air you inhale in salt mine is non-polluted air.  There is actually a salt mine rehabilitation clinic deeper than this floor, people come here to inhale good air and get treatment from their illness.

Salt stalactites can be seen on top and on the side of the wall.  The guide asked us to try to taste if these are really salt.  So I did, it was indeed salty. 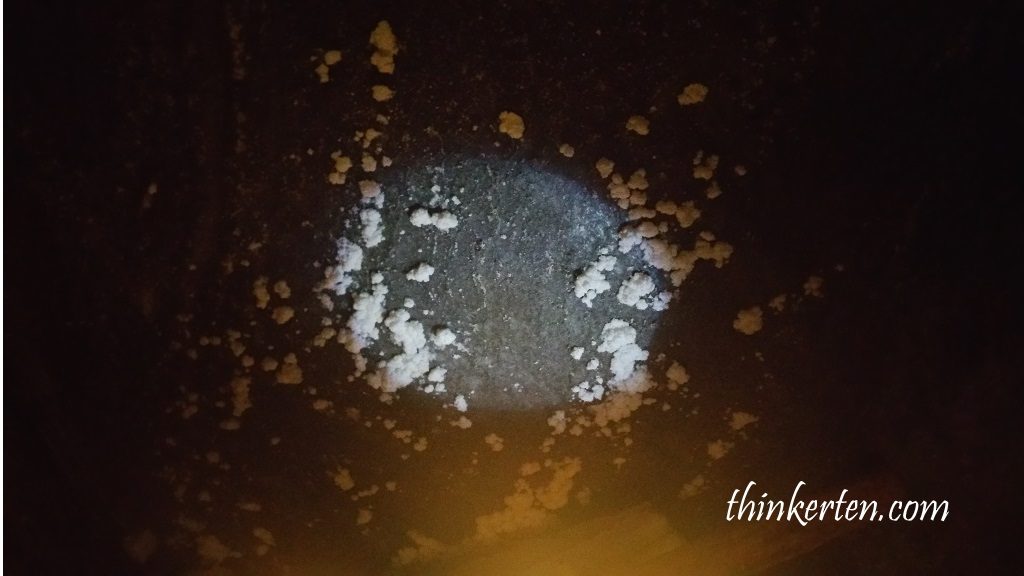 The Polish guide told us these salt statues were carved by miners, I think these miners were quite artistic and talented, they would use their imagination to carve during their spare time.  May be life was too bored in the dark mines. 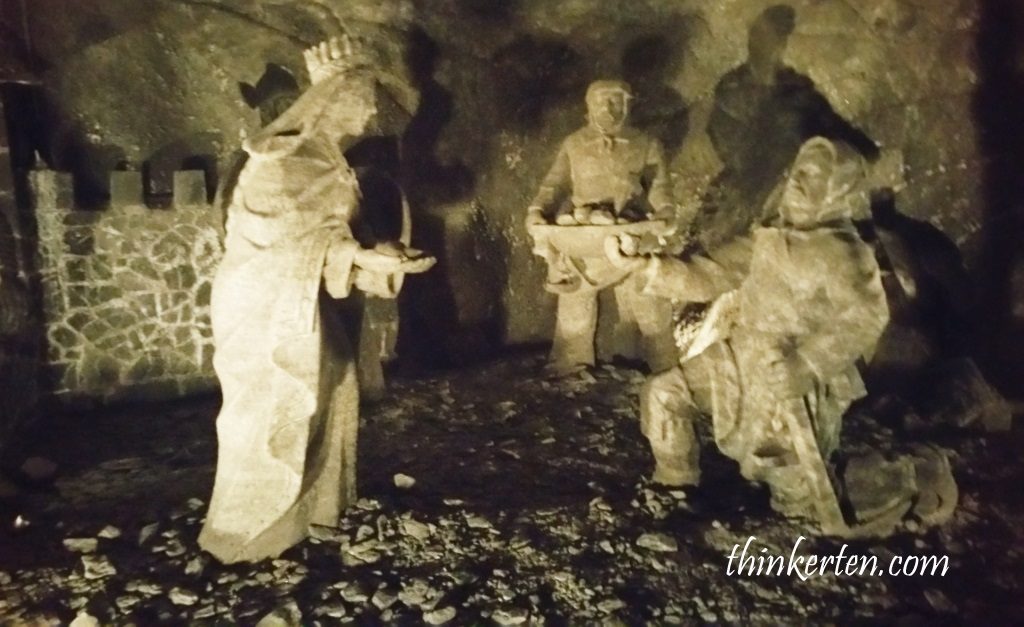 The guide also told us the legend of the salt mine and how it was discovered many years ago.  There was a Princess named Kinga and she was going to marry King of Krakow.  Kinga’s father gave her a salt mine in Hungary as a dowry.  She threw her ring in the salt mine and went to Krakow.  When she was in Krakow, she asked the miners to dig a deep pit until they found a big rock of salt.  The miners split the big rock salt and found the ring was there.  The above picture show a miner hand over the ring to Princess Kinga. 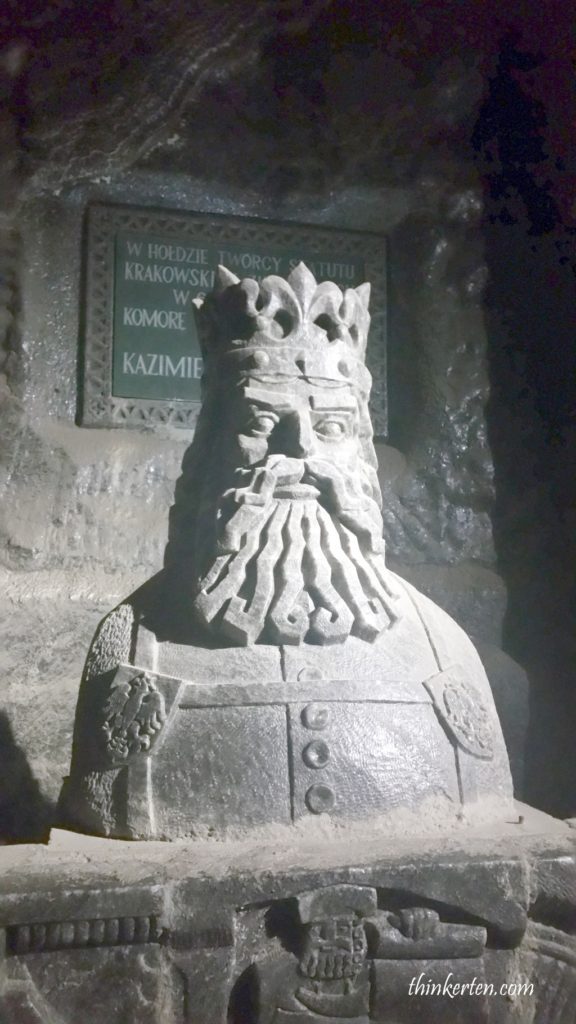 Scary tunnels in the mines

There are few tunnels here and there, like a maze.  It is impossible to walk on you own as you may get lost.  I was quite nervous staying deep underground so I always stay closely with the guide.

7 cute dwarfs statue carved from salt can be found in this Salt mine as well.  Children would find it interesting to see these little dwarfs in the mine.  After all, the 7 dwarfs were all miners in the snow white story.  It is so appropriate to be here. 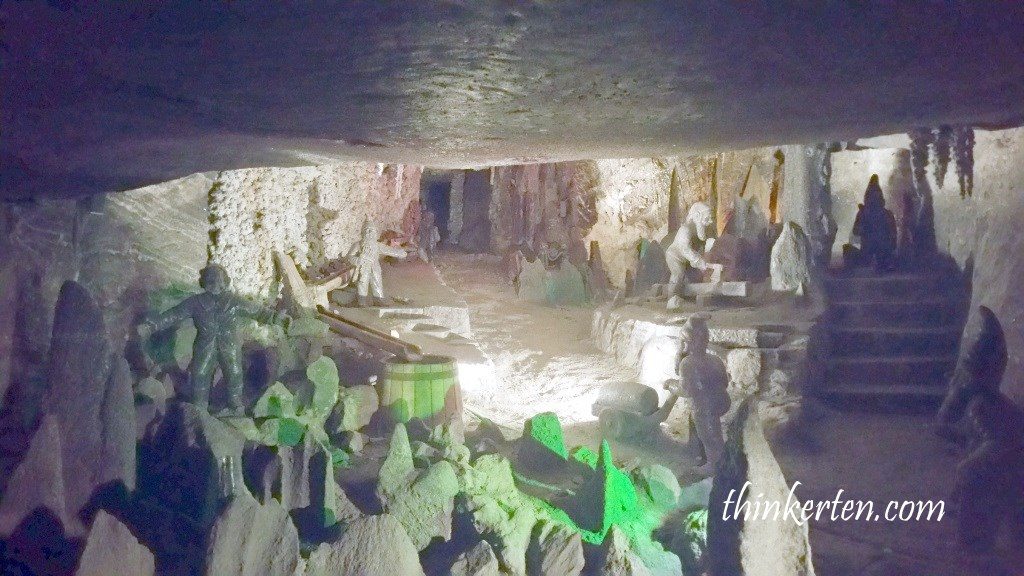 We also saw some horses and the stable in the salt mine.  The guide told us that many years ago the miners used the horses to help them do the tough and heavy job underground.  It was very troublesome to bring the horses up and down so the miners built the stable for the horses to stay in the mine.  It is quite amazing to learn that the horses did stay few hundreds meter below ground.  One thing I was wondering, I know the air is non-polluted and the air quality is very good here, how about the sunlight?  Can the horses survive without sunlight? 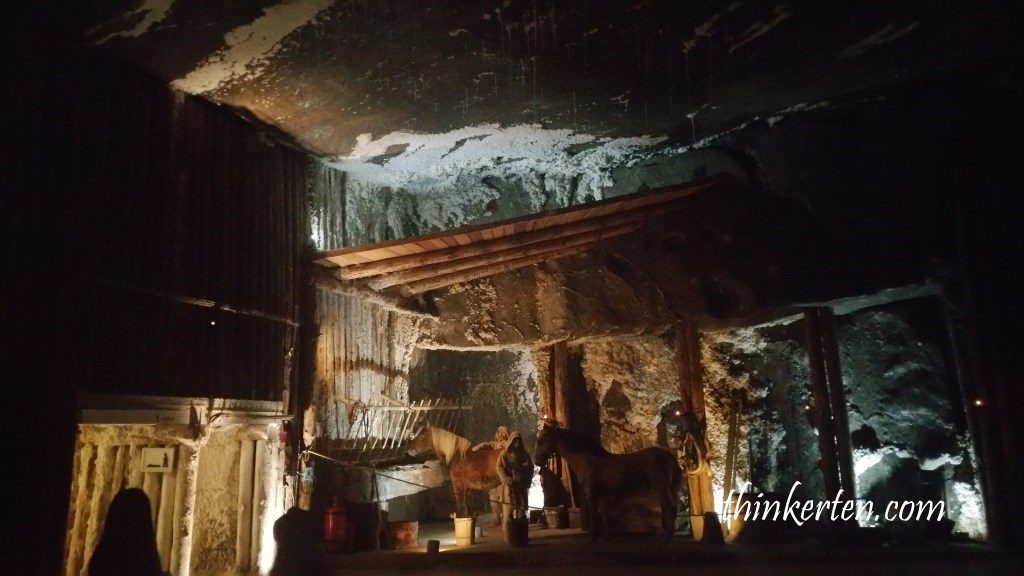 St. Kinga’s Chapel is the crown jewel of the “Wieliczka” Salt Mine. Very impressive the moment I step in.  The English guide told us some important function, such as wedding ceremony, Holy Mass and classical concerts were organised in this unique location. 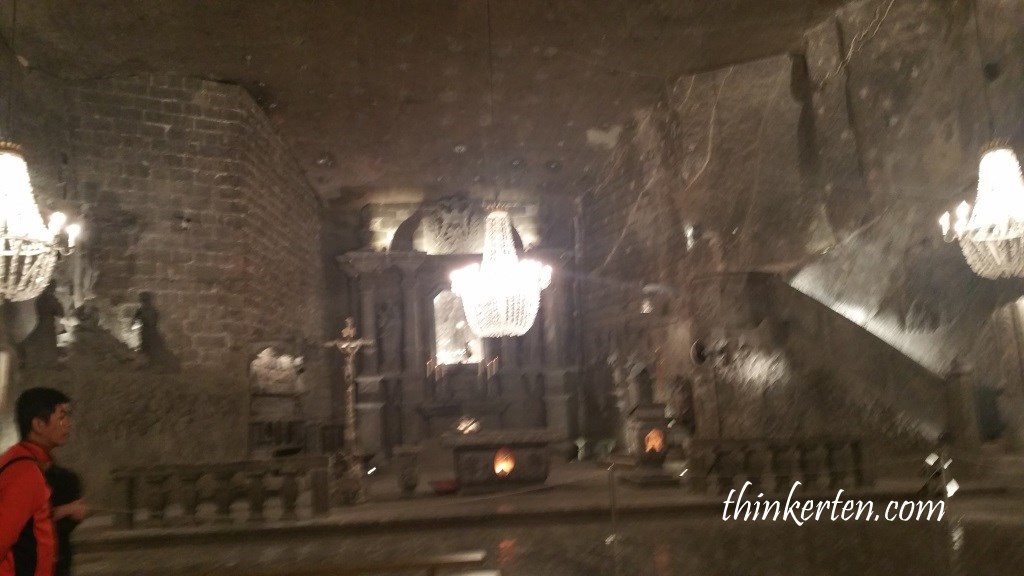 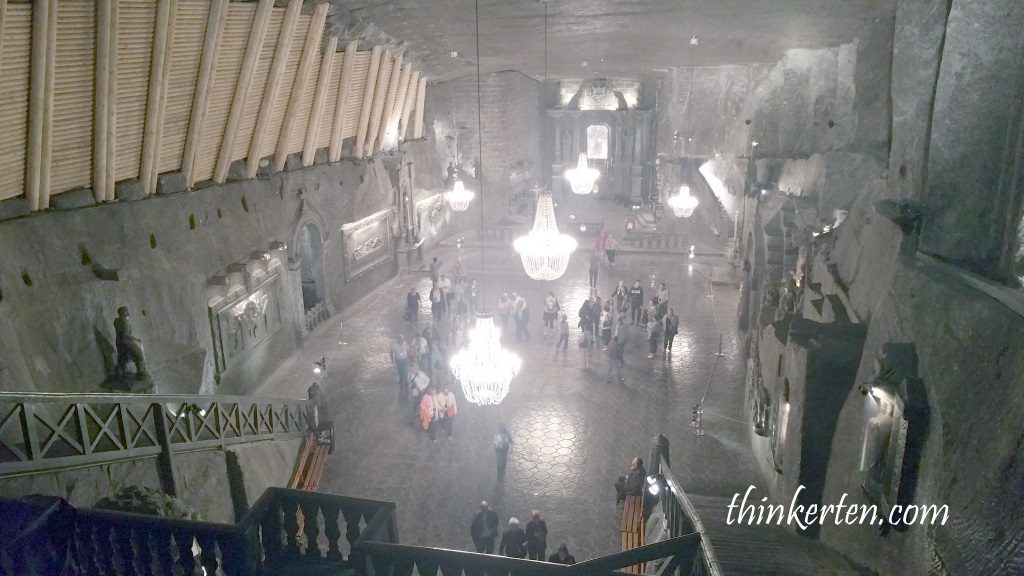 I could not believe we were at 101 m underground in the salt mine and there is such a beautiful Chapel down here.  Took the above picture from a balcony at the top.

Salt Crystal Chandeliers – made from salt

I am standing in front of rocks-salt statue of Pope John Paul II.  We have to pay a little fees to take photography in this chapel and no flash light is allowed. 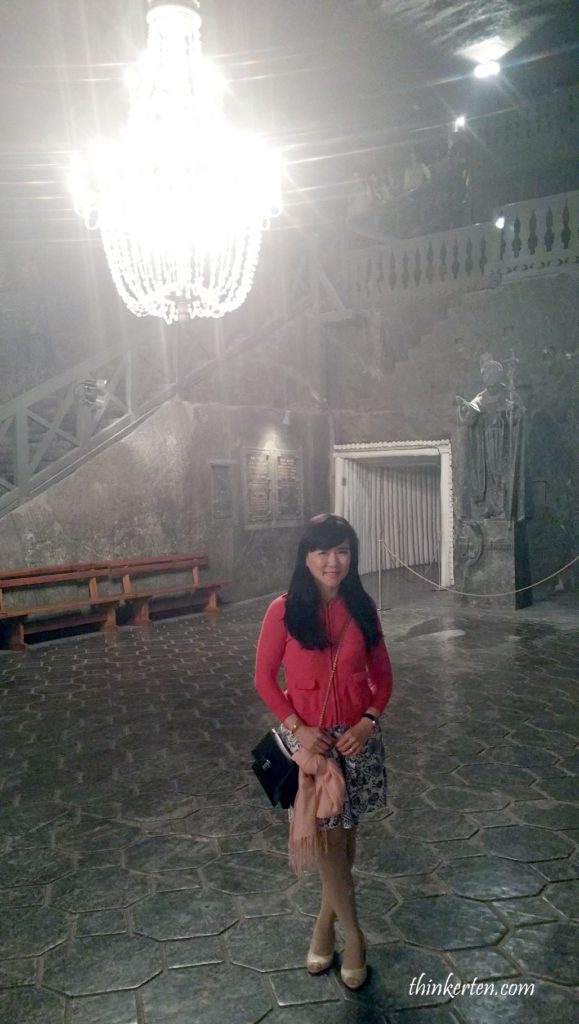 Salt for bath scrub in the Gift shop – must buy!

After we exist, Daniel suggested us to buy the Salt for bath scrub product for souvenirs.  I specially interested in the salt for bath scrub and purchased quite a few back home for gifts and my own usage.  I wanted to get more but the salt is actually very heavy.  One bottle is almost 500 g so I added up few kilos for my luggage.

Compare to Body shop salt product, the salt scrub sold here is way cheaper, at least 3-5 times less.  Strongly recommend to try the salt bath scrub.  I really feel the difference after using them.  Available in many kind of fragrance too.

I remembered we had our dinner very late that day, slightly after 9 pm because the salt mine tour was taken us 2 hours and by the time we arrived in our hotel it was already 9 pm.