Discover Thing to do in Telok Ayer Street Singapore

When I was exploring Telok Ayer Street last Sunday, I realized there are many important temples and Clan Associations located here.  Find out why?

First, let’s translate the Malay name into English, since I know Malay so this part is not hard.

Telok Ayer Street used to face the original seafront and served as docking bay for the boats and sampans of early immigrants.   Many then built the temples to worship their own god for safe sailing and to protect their future lives in Singapore.  This also led to concentration of Chinese Clan associations. 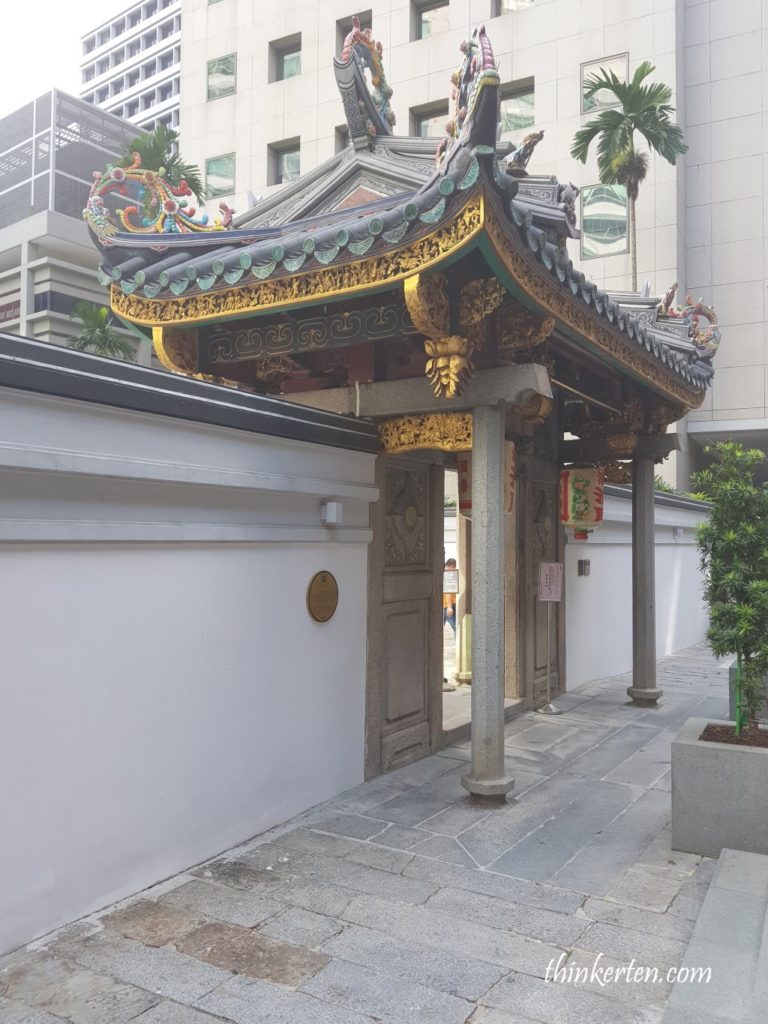 The temple is under some minor construction when I was there, you are still allow to go in to pray.  The temple is quite small and first built in 1820 with very basic building materials, such as simple woods and the rooftop is just attap by the Teochew Chinese immigrants.

You will notice the rooftop of this temple is unique as it is decorated with detailed ceramic figurines.  Don’t forget to look up to search for those cute figurines on the top of the roof.  There is another more important thing about this temple, it is also known as “Love Temple”.  If you need to find a girl friend or boy friend, future husband or future wife, come to pray to this temple as the matchmaker “Yue Lao” will bring you luck to meet your other half.  Some happy couples really came back to the temple to thank the god after their wishes were granted.  🙂 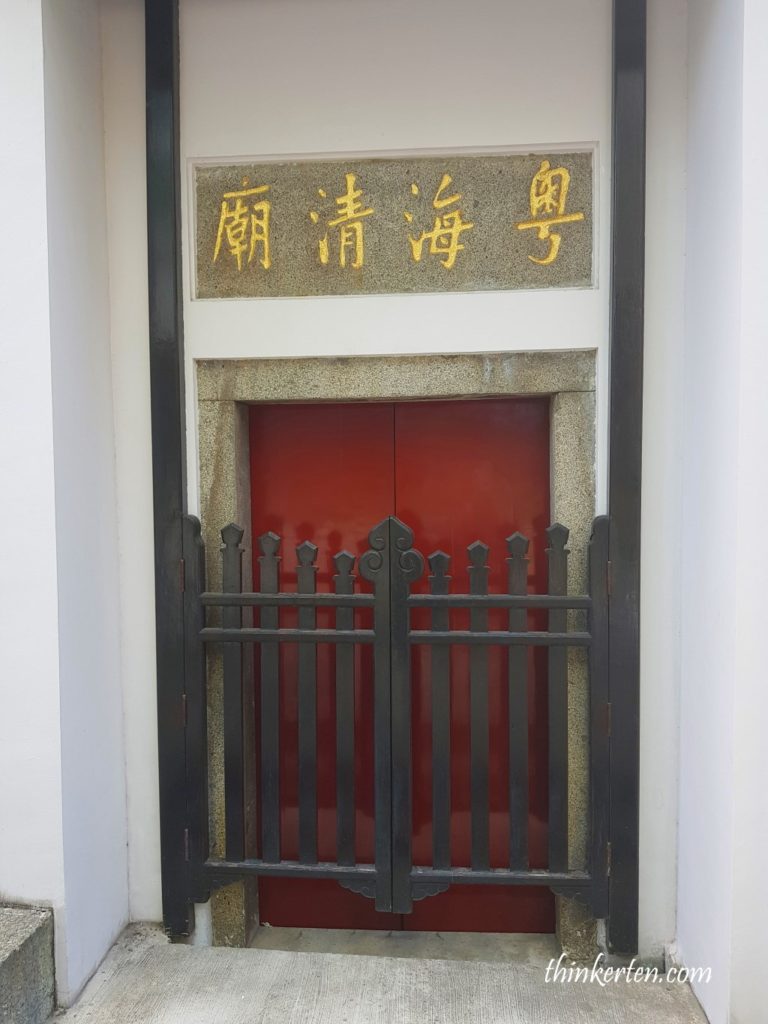 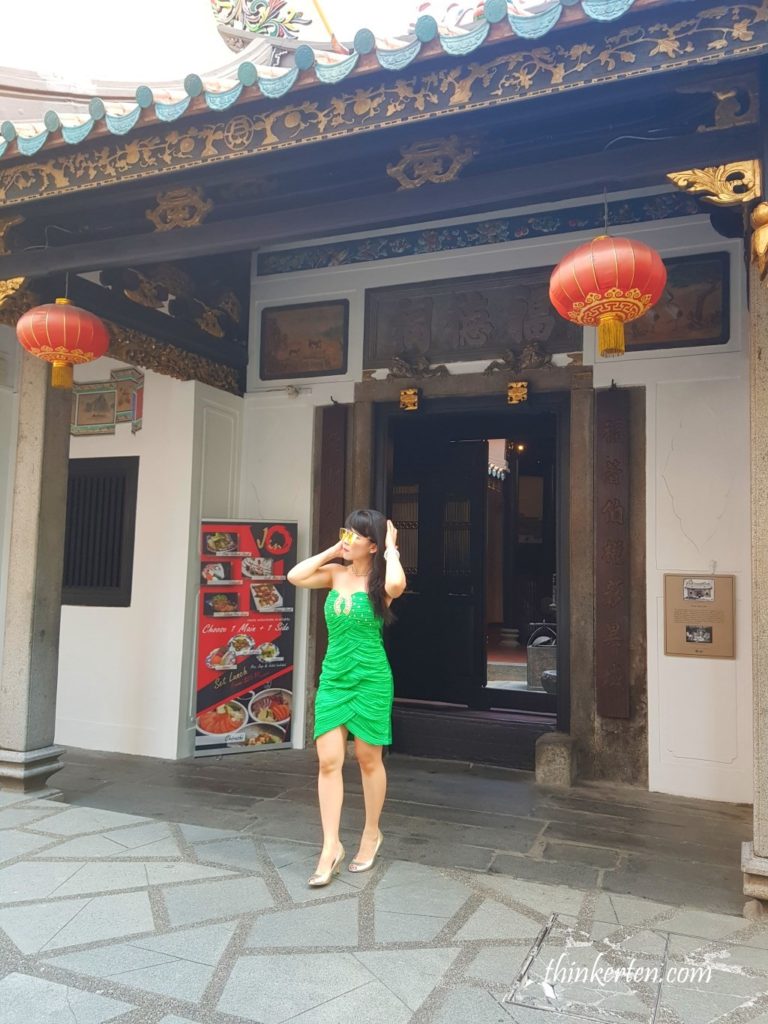 This is a temple built by the Hakka and Cantonese immigrants to pray for Tua Pek Kong, the God of Wealth.  But now, it has become a street museum which showcase many artifacts and early lives of the Chinese immigrants. 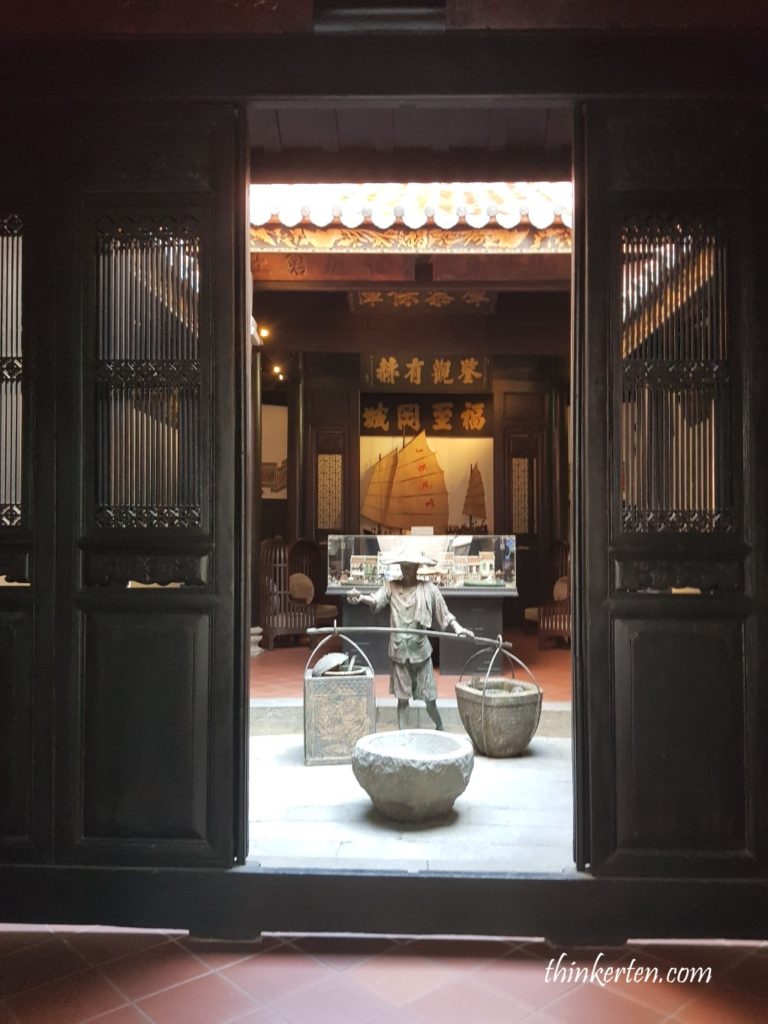 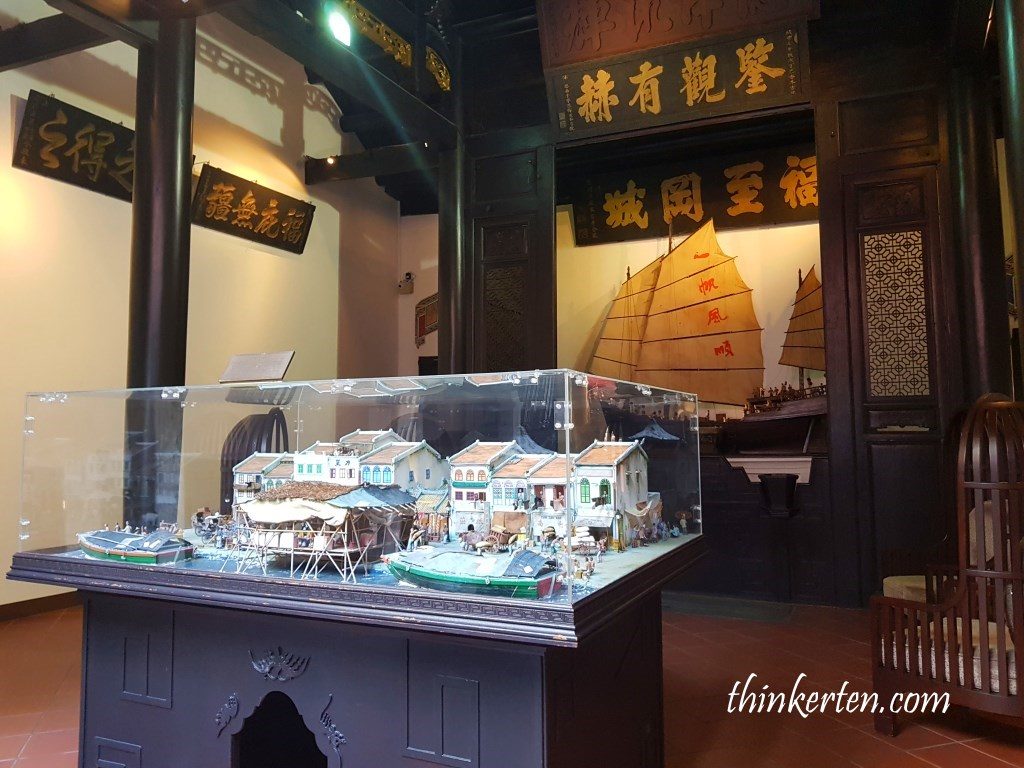 The miniature below showing the early unskilled Chinese immigrants doing the coolie work at the harbor. 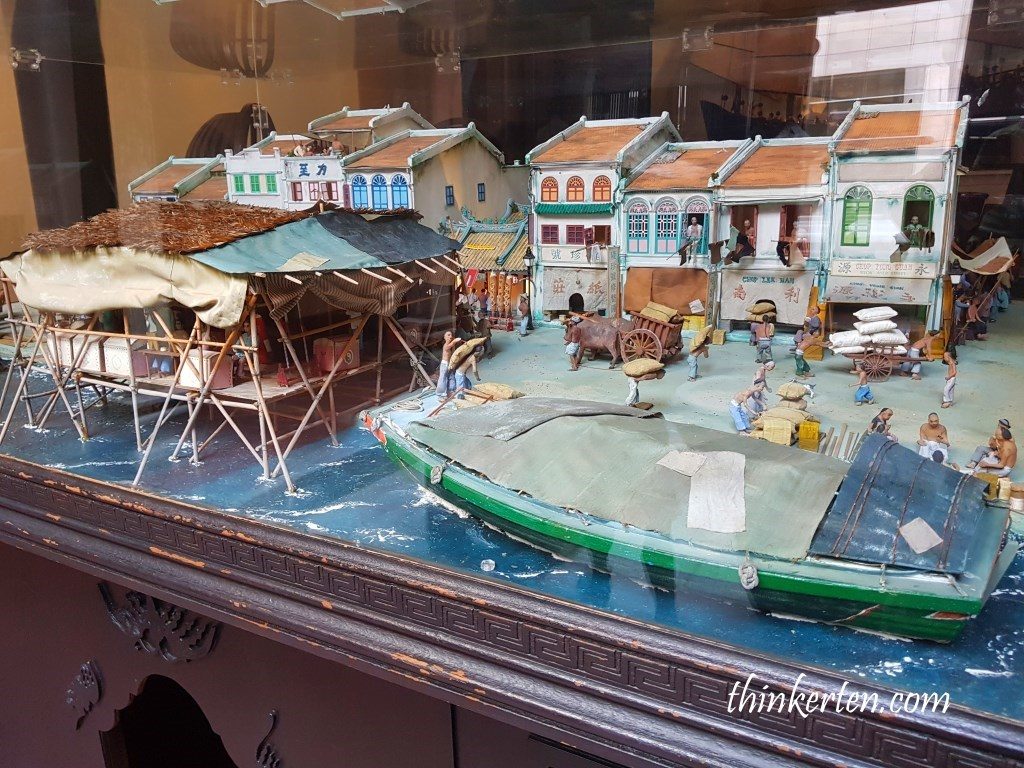 Artifacts in the museum

The street museum actually very small and it links to the Far East Square and many people would use this link as a shortcut.

Amoy Hotel has great location for tourist as it is located between Chinatown, 5 mins walks and the CBD 10 mins by cab, inside Far East Square, on top of the Fuk Tai Chi Museum.  Foreign tourists would love the setting of this boutique hotel, as you will walk pass the Fuk Tai Chi Museum before coming to the front desk reception of the Hotel.  So you would have the feeling as if you are staying in one of those old houses in the early 19 th century. 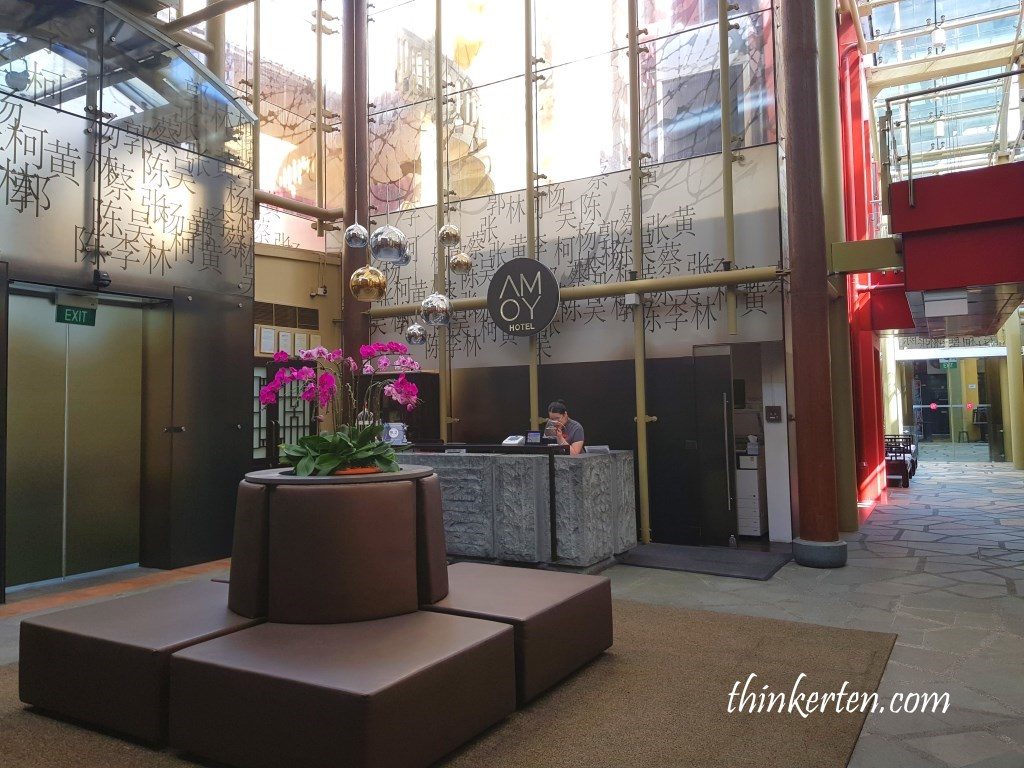 Ying Fo Fui Kun is the Hakka Clan Association, it was first started as a temple in 1881 but then turned into a clan association, aiming to help new Hakka immigrants to settle down in Singapore.  Even now, the temple is still holdings gatherings and activities for the Hakka Clan. 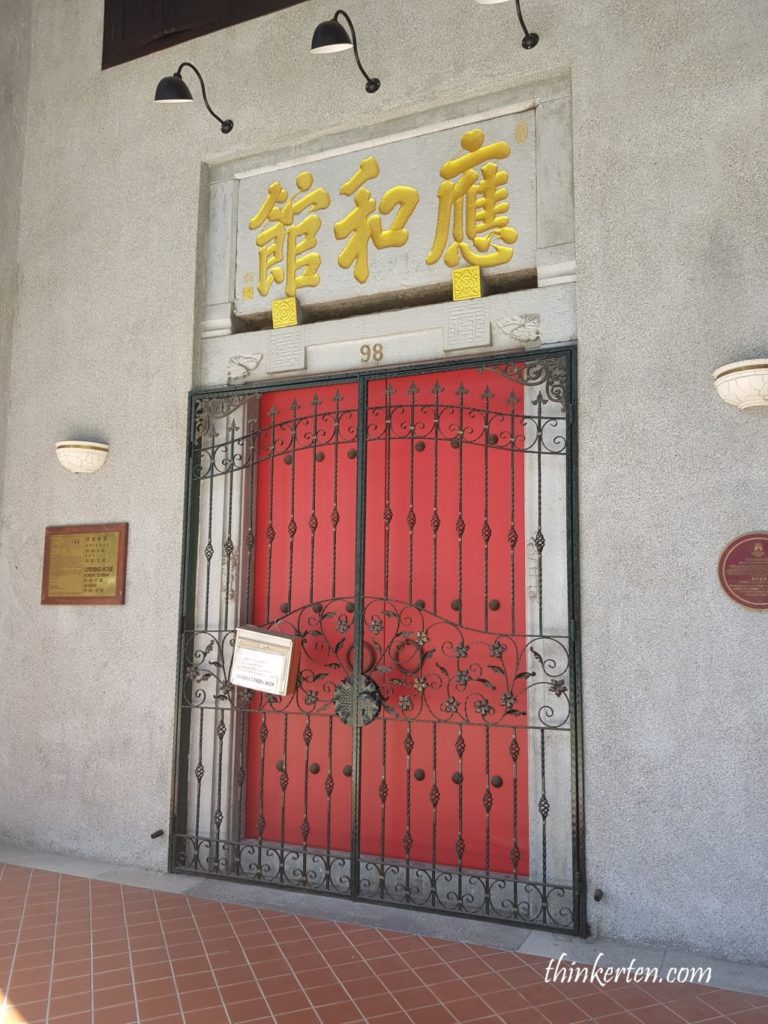 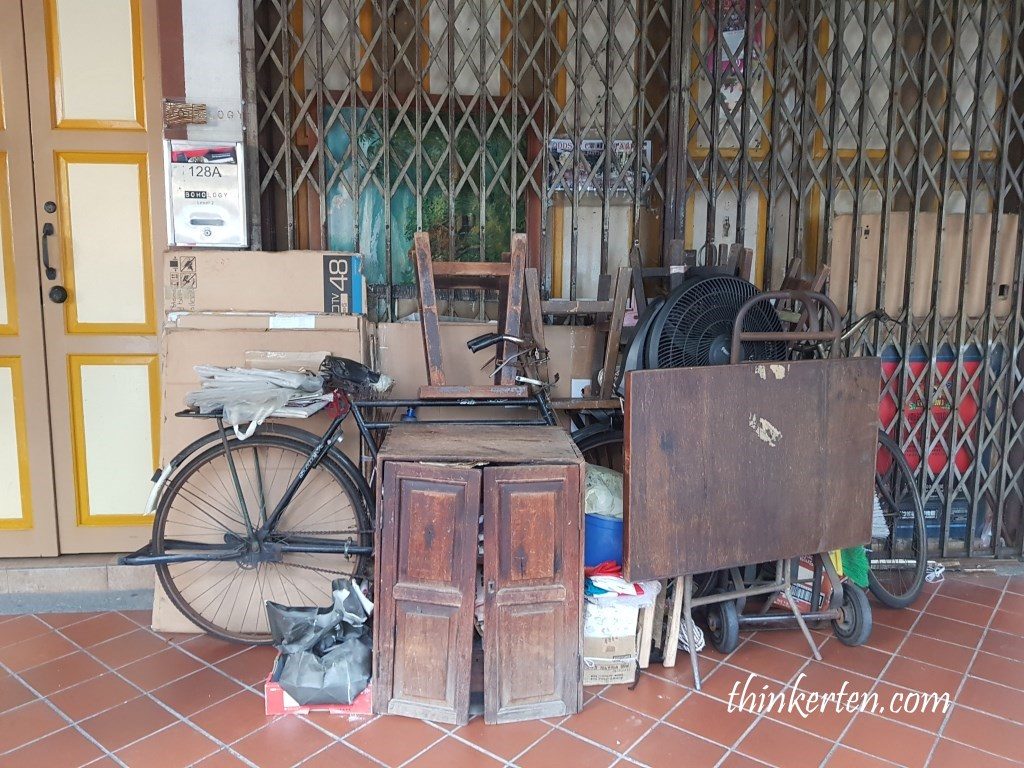 If you like some antique, come visit this place at 128, Telok Ayer Street, you never know what gem you would find.  It was closed on the Sunday when I was there but you can still see many old stuff locked and packed outside the shop, some cooking pots and baskets are hanging on top of the ceiling!  Beware and I hope those pots and baskets won’t fall on your head.  Yes, it is quite interesting to see old collectible shop like this these days. 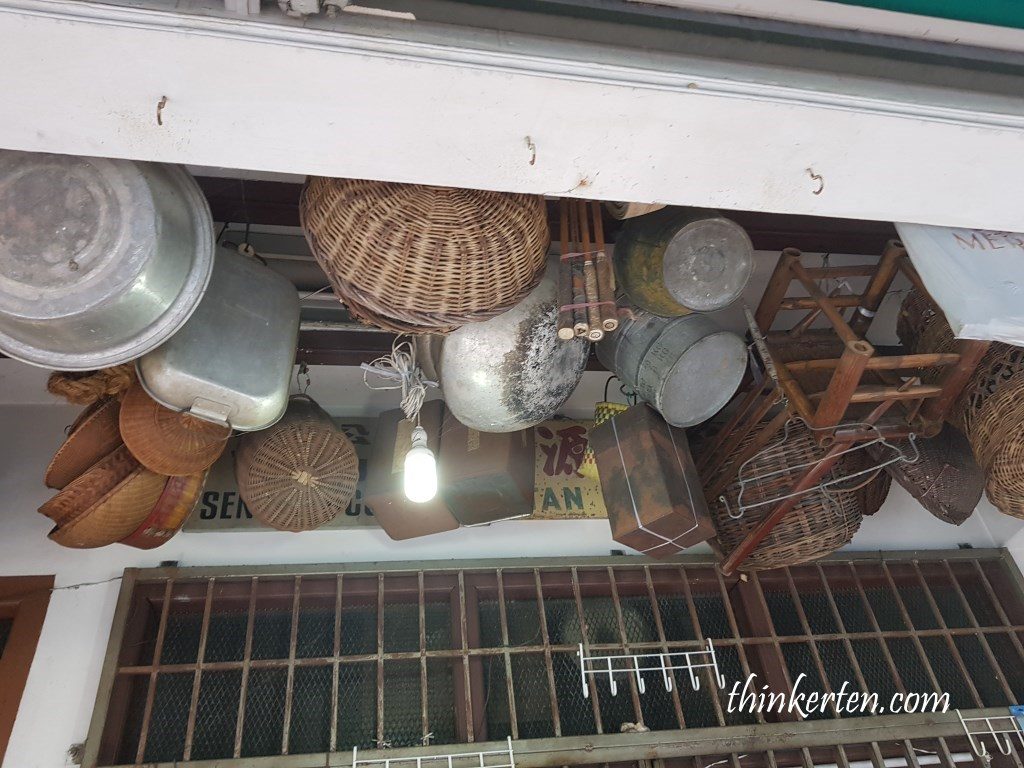 Another Clan Association found in this area, Eng Choon belong to the Fujian/Hokkien.

Why so many Clan association in Telok Ayer Street? 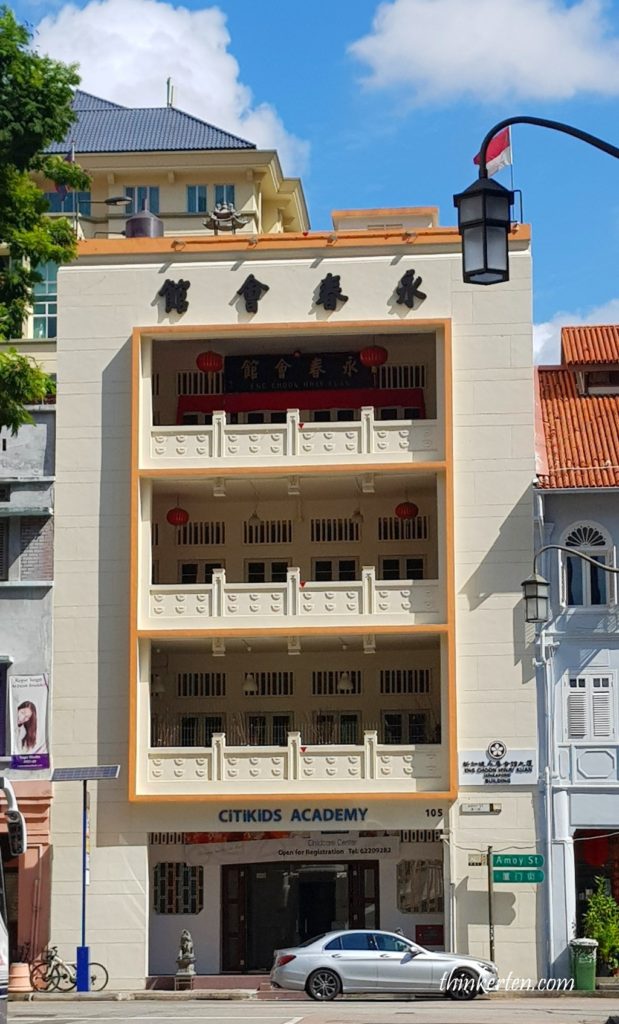 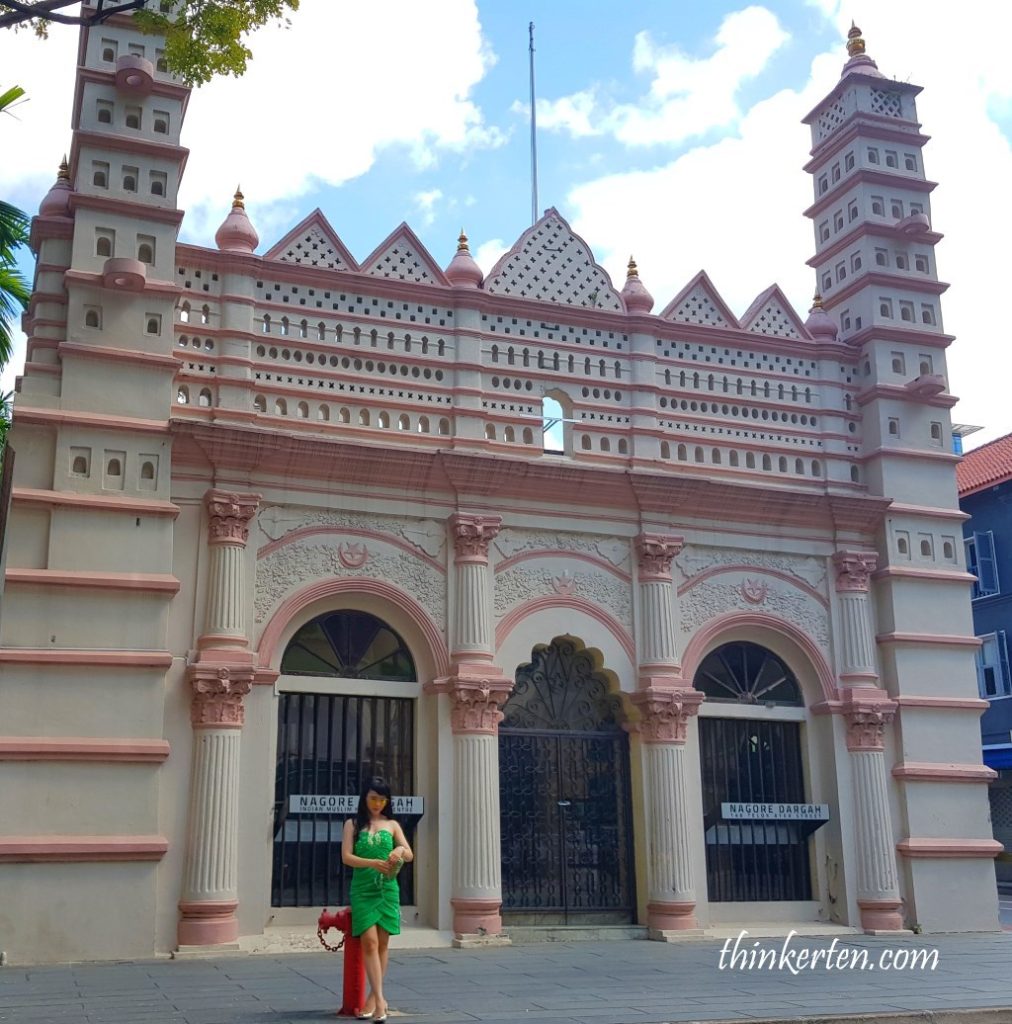 This unique blend of Classical and Indian Muslim shine was built by Muslims from the southern India in 1828.  The architecture of this shrine is pretty awesome, stop by to take picture and if it is open, go in to have a look.  No entrance fees is needed. 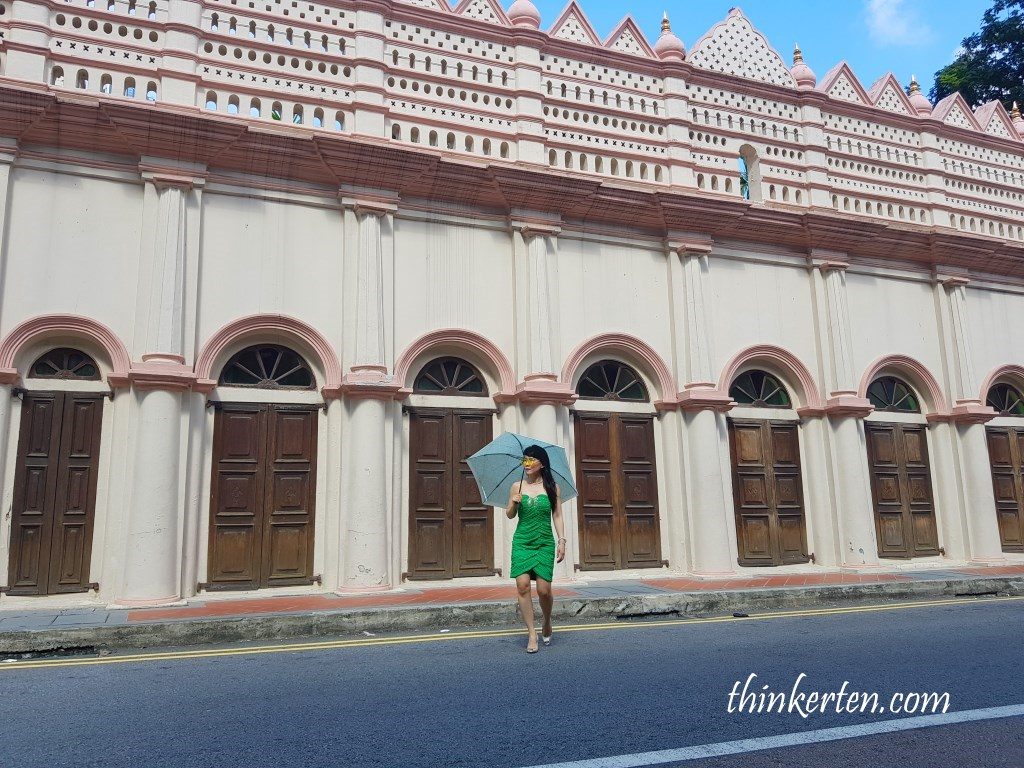 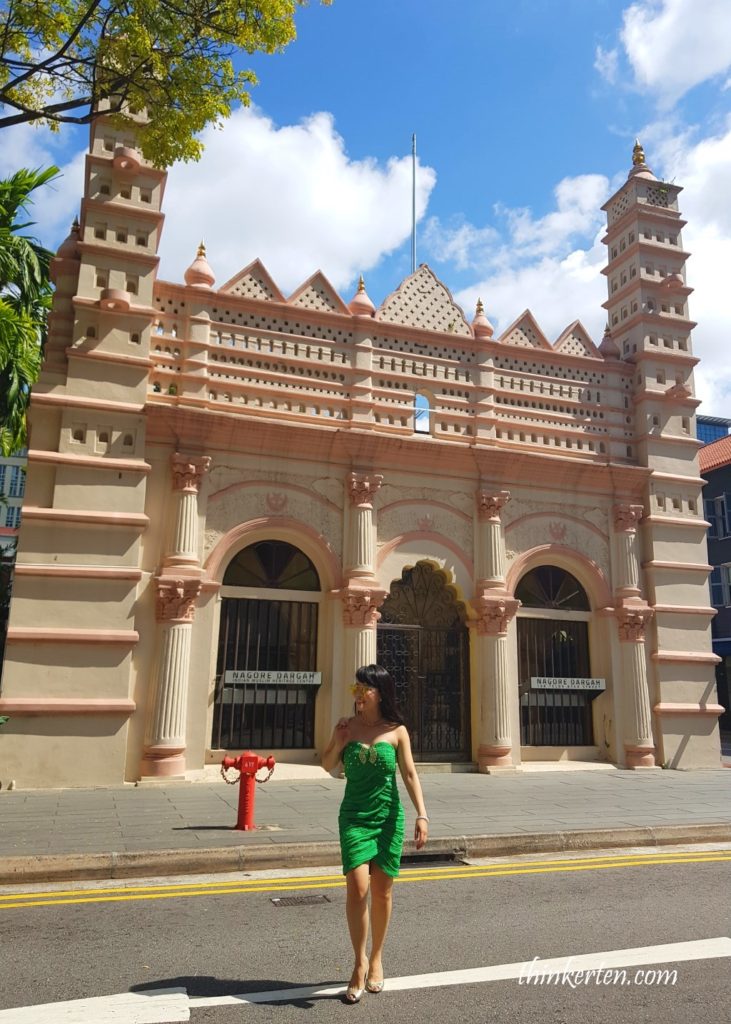 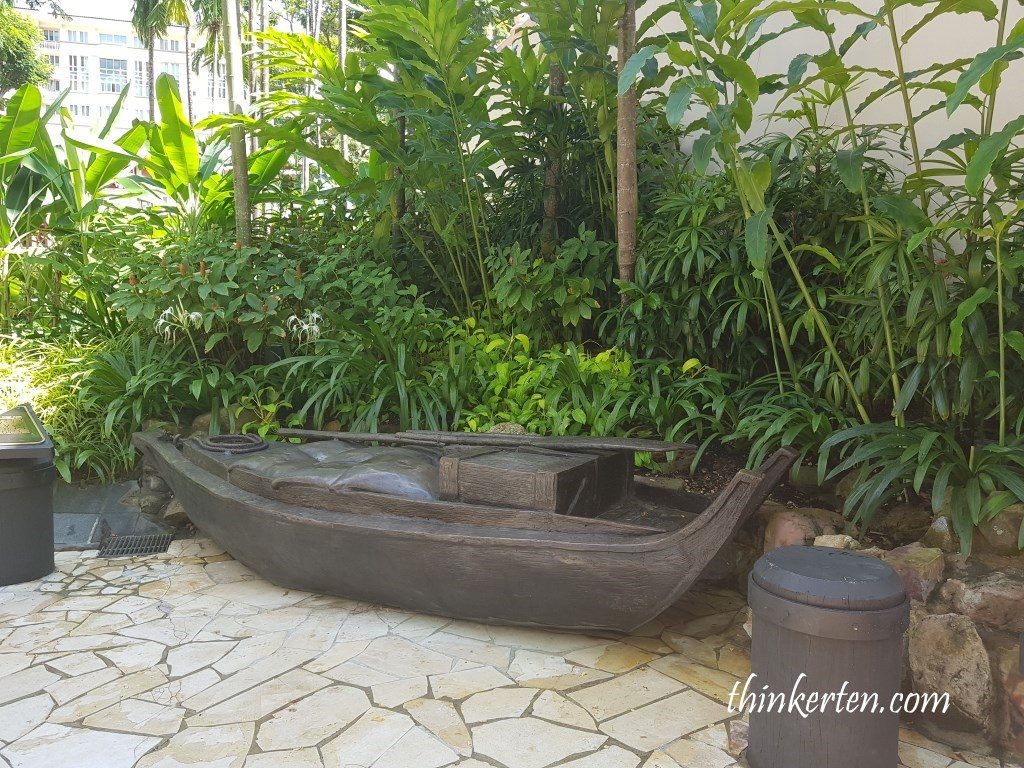 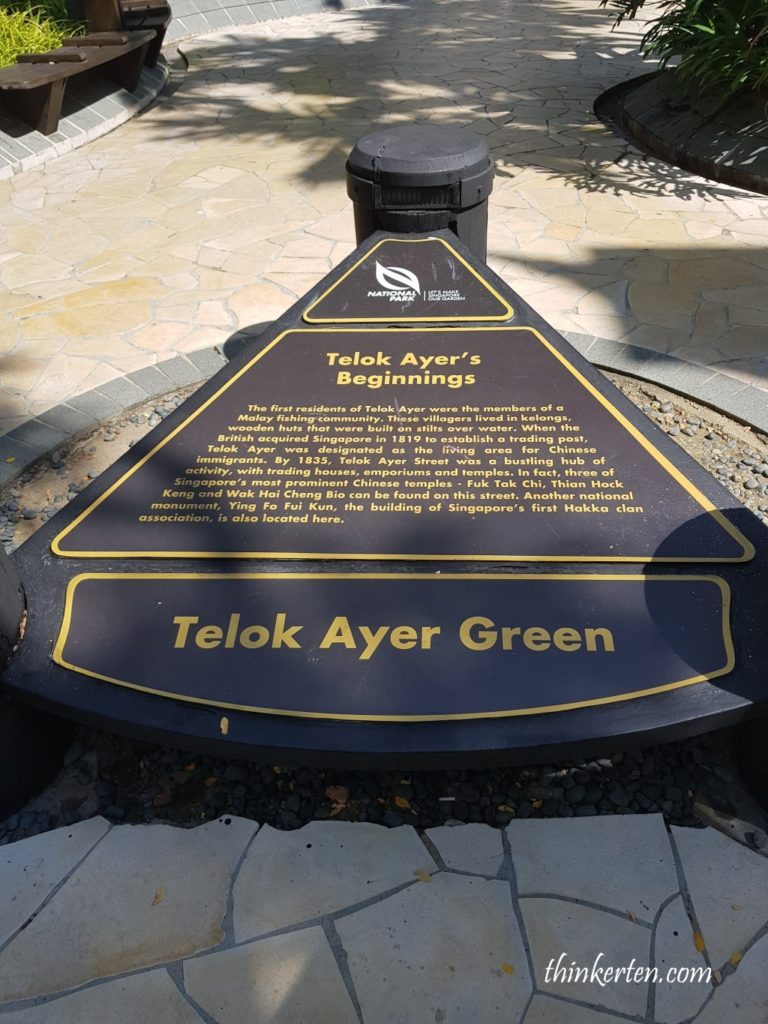 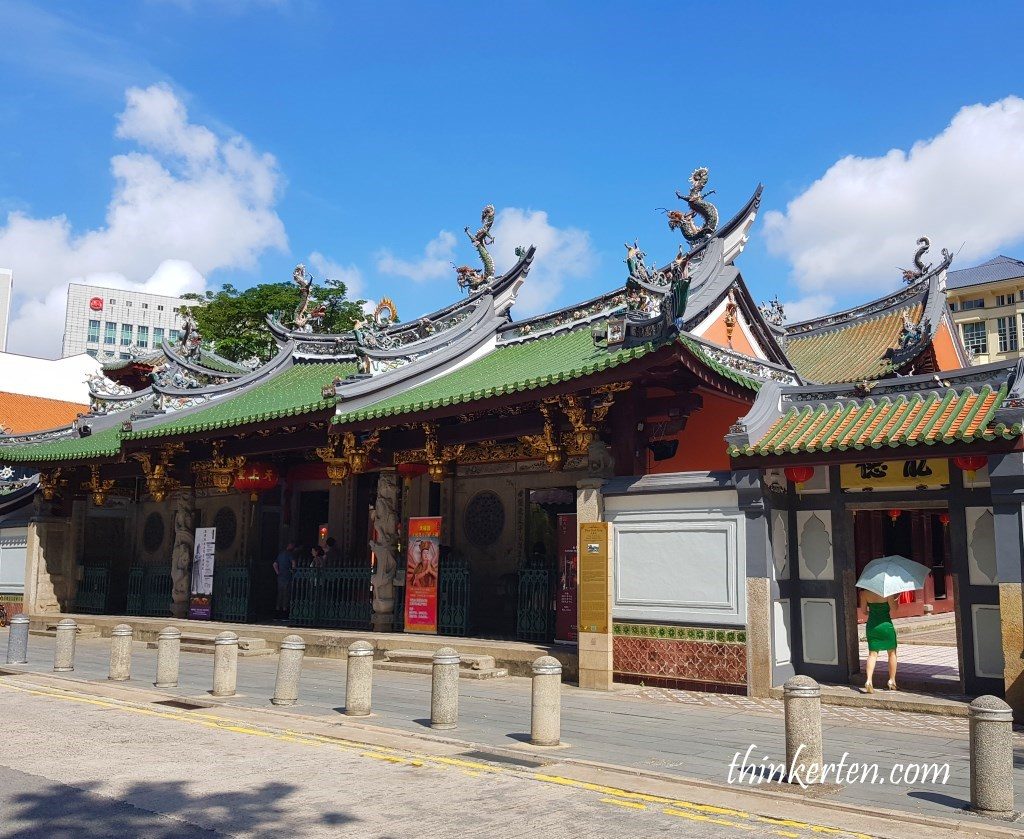 This old temple is one of the most important temple in Singapore as you will notice many tourist coaches stop outside the temple and drop the tourists. 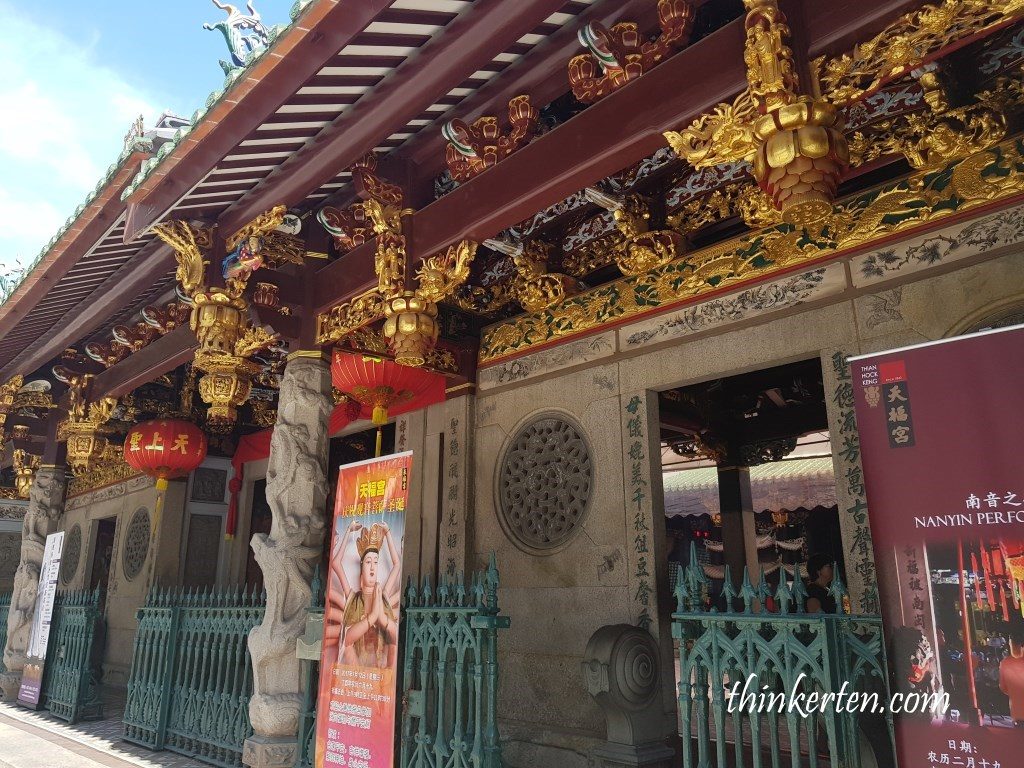 As mentioned earlier, Telok Ayer Street faced the beach and sea in the 19th century so this temple is specially built by the Hokkien and dedicated to Mazu, the Goddess of Sea.  There is a poster of Mazu placed at the entrance of the temple.  If you go to the back of the temple, you will see a mural showing story of the early immigrants in Singapore, quite an impressive piece of art. 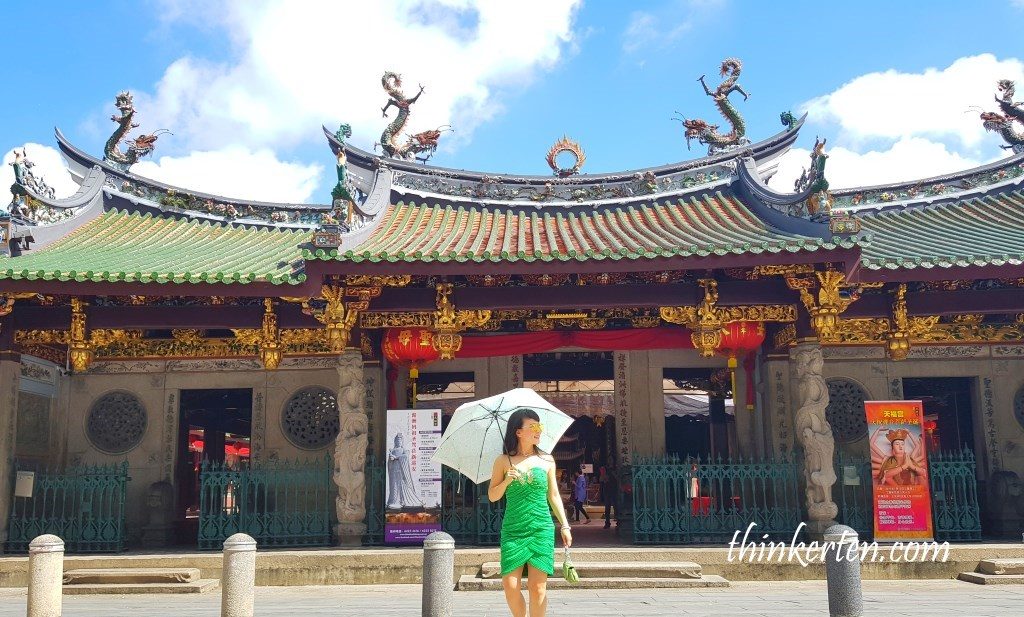 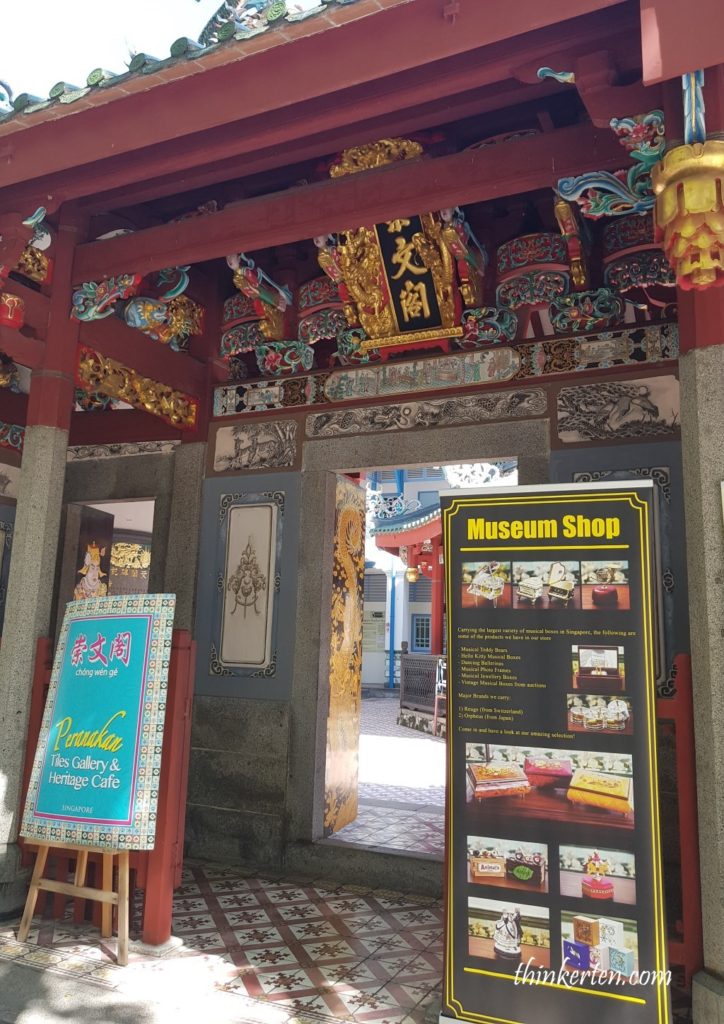 Chong Wen Ge is located just next to Thian Hock Keng Temple.  Chong Wen Ge used to be a girl school and in the middle there is a beautiful pagoda sit there. 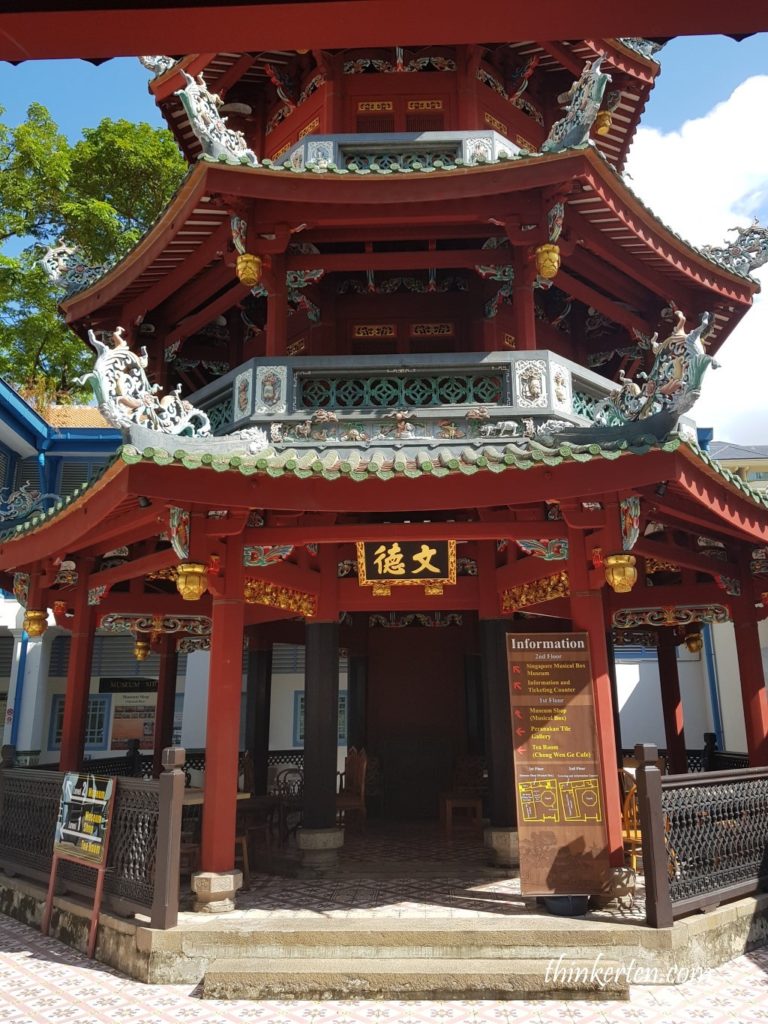 The old school now has turned into Chong Wen Ge Cafe serving Peranakan cuisine.  The tiles and the interior, including tables and decoration of the cafe are using the Peranakan style.  Very pretty! 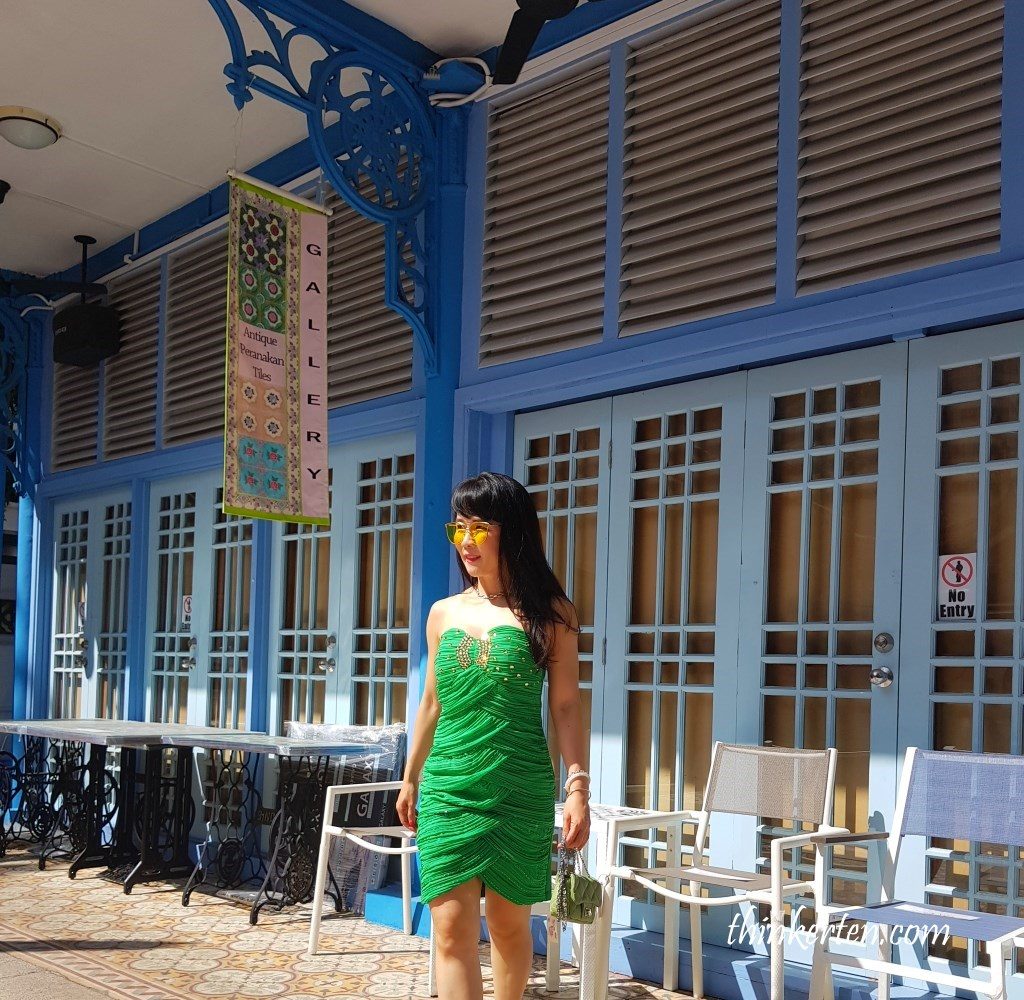 Singapore Musical Box Museum is first musical box museum in Singapore, also sharing the building in Chong Wen Ge.  The collector of this museum is a Japanese who has quite a big collection of the antique musical boxes collected from all over the world.  If you are fan of musical box, do pay a visit! 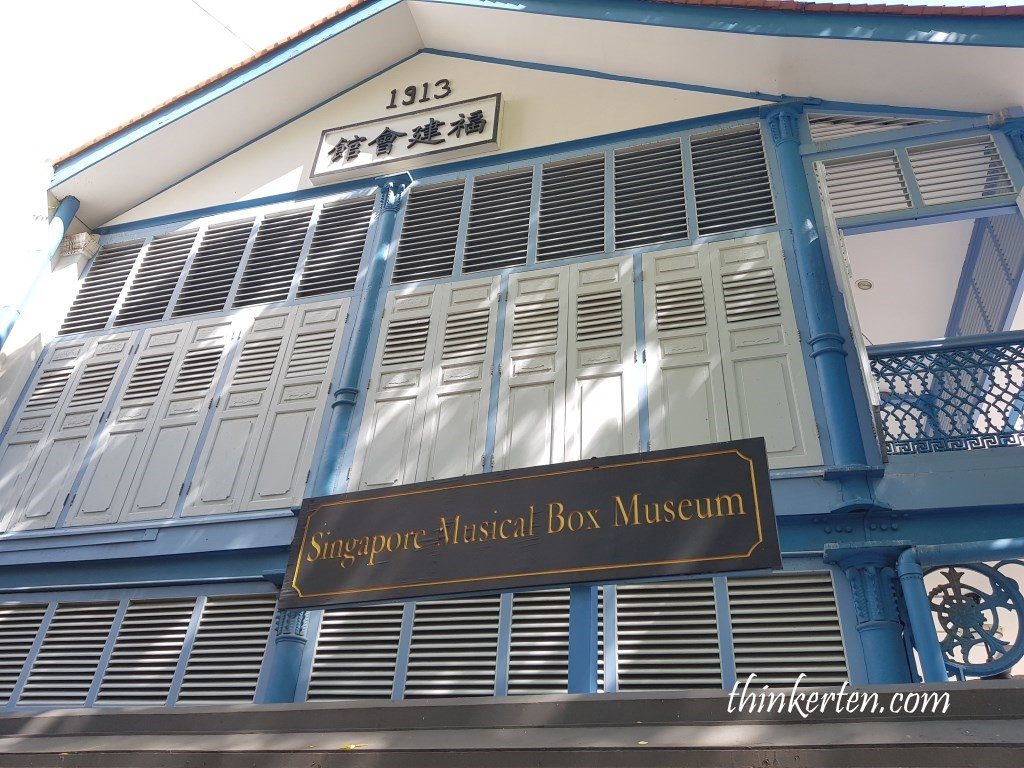 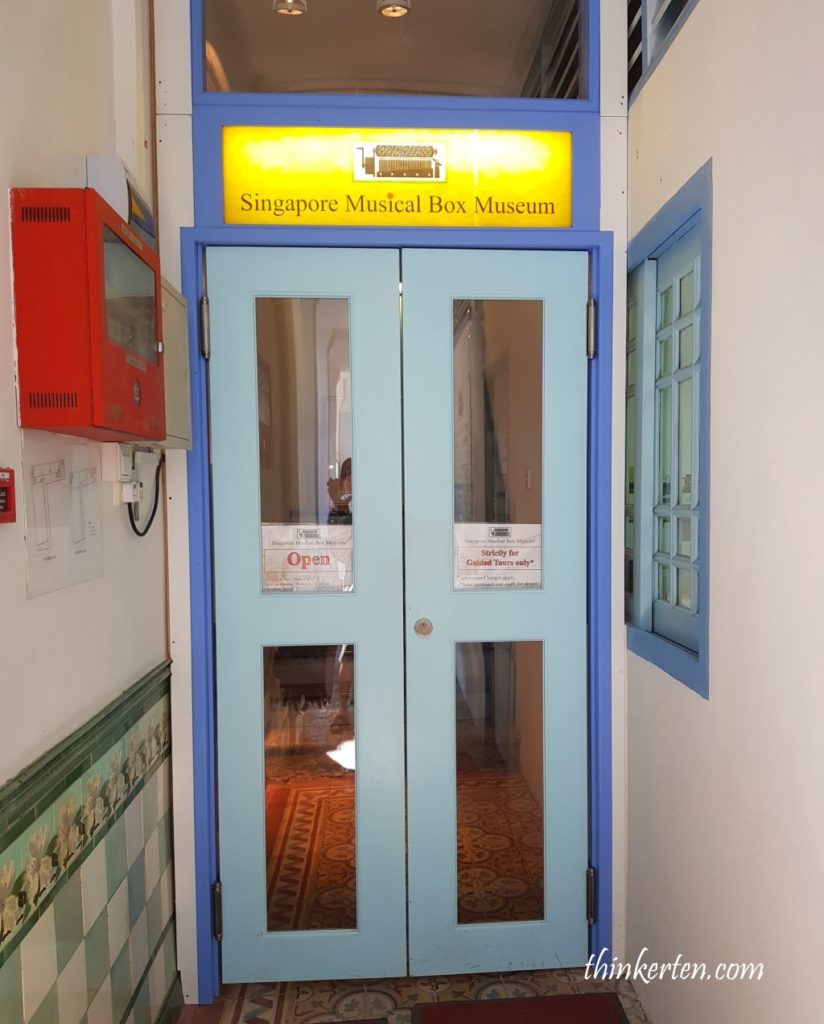 This mosque is very small and built in 1827, it was a mosque for the Tamil Muslims from south India.  This is a very simple design mosque with two minarets placing in the middle.

The decor is pretty interesting as it occupies the former site of the Chung Hwa Clinic and they have retained the sign.  You would think why people are all having a feast happily inside, rather than waiting for their turn to see Chinese TMC doctors.  This Cafe is full of tourists and locals.  I can see the atmosphere is quite cool and good vibes. 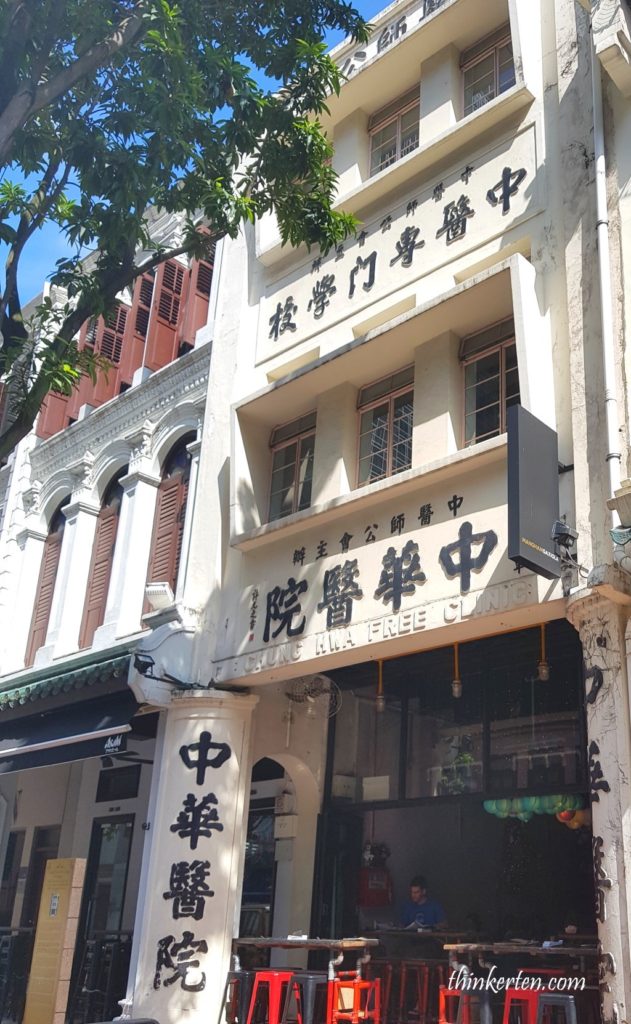 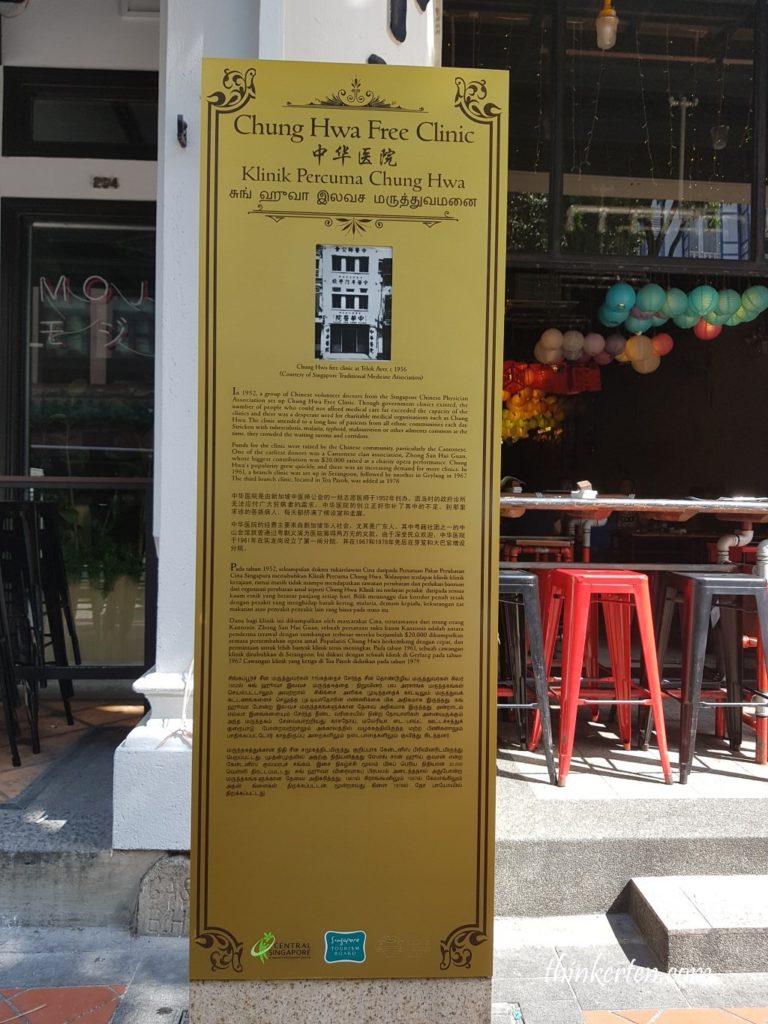 This old church was set up by a Methodist missionary and medical doctor in 19th century. It was announced as a national monument in 1989.  Not a very fancy church but unlike other traditional church, this church reflects its Chinese environment and the time in which it was built, so still quite unique in its own way. 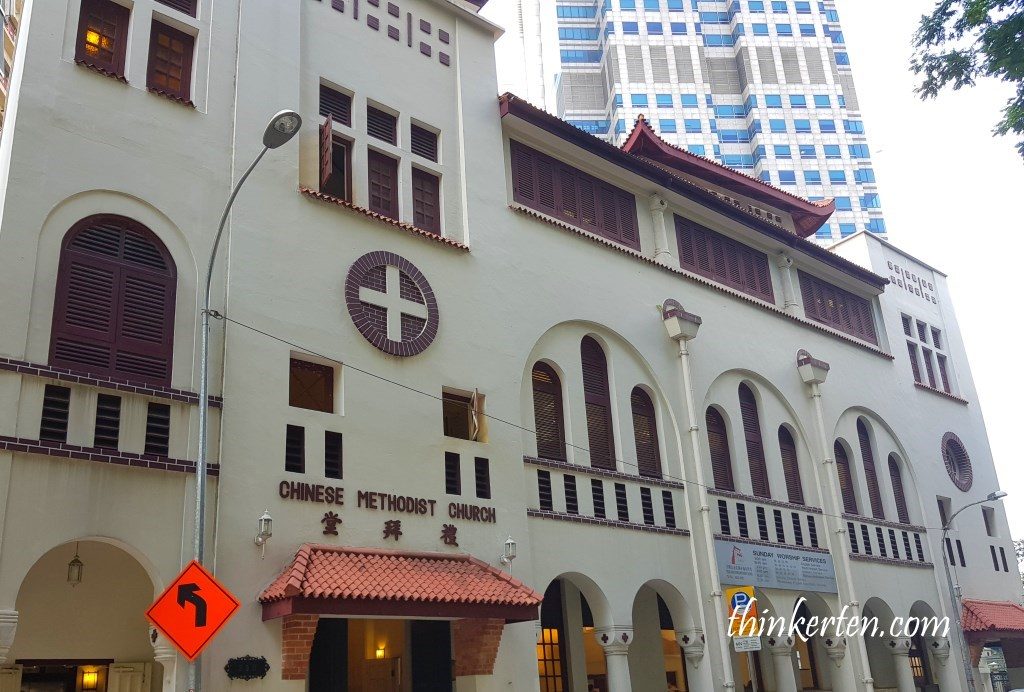 Found another Clan Association in Telok Ayer, the See’s Clan Association.  In the past, the Clan Associations were set up to helped and support the newly arrived Chinese immigrants to settle down and provide basic needs. Now, the role of clan associations has changed and working into preservation of the rich Chinese heritage. 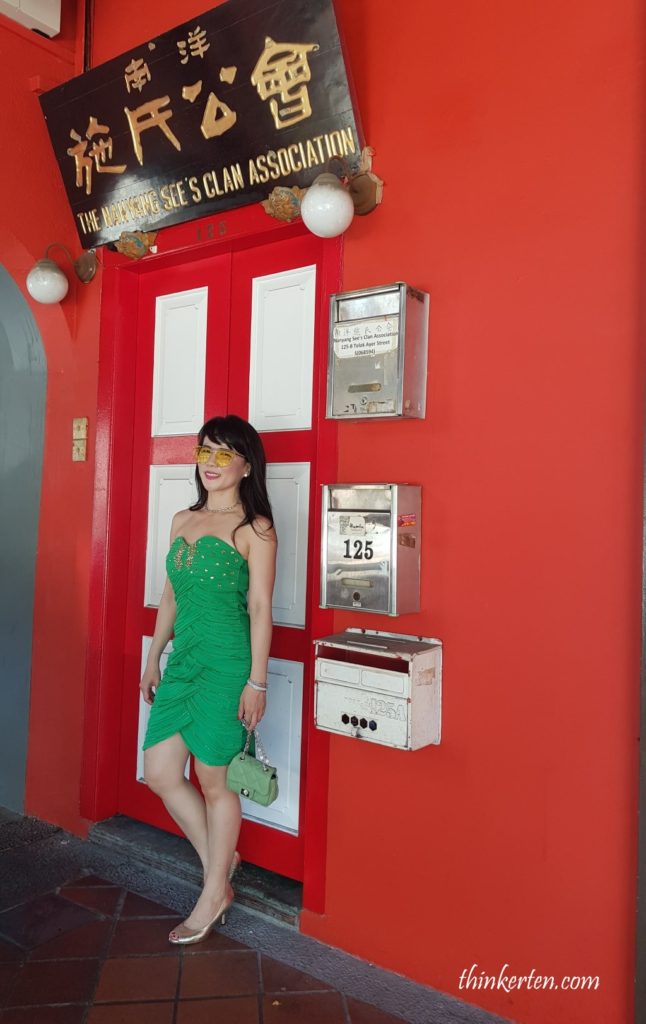 After exploring Telok Ayer Street, I have discovered many Chinese Clan associations and over 100 years old temples, Indian Muslim mosque and their history behind it. 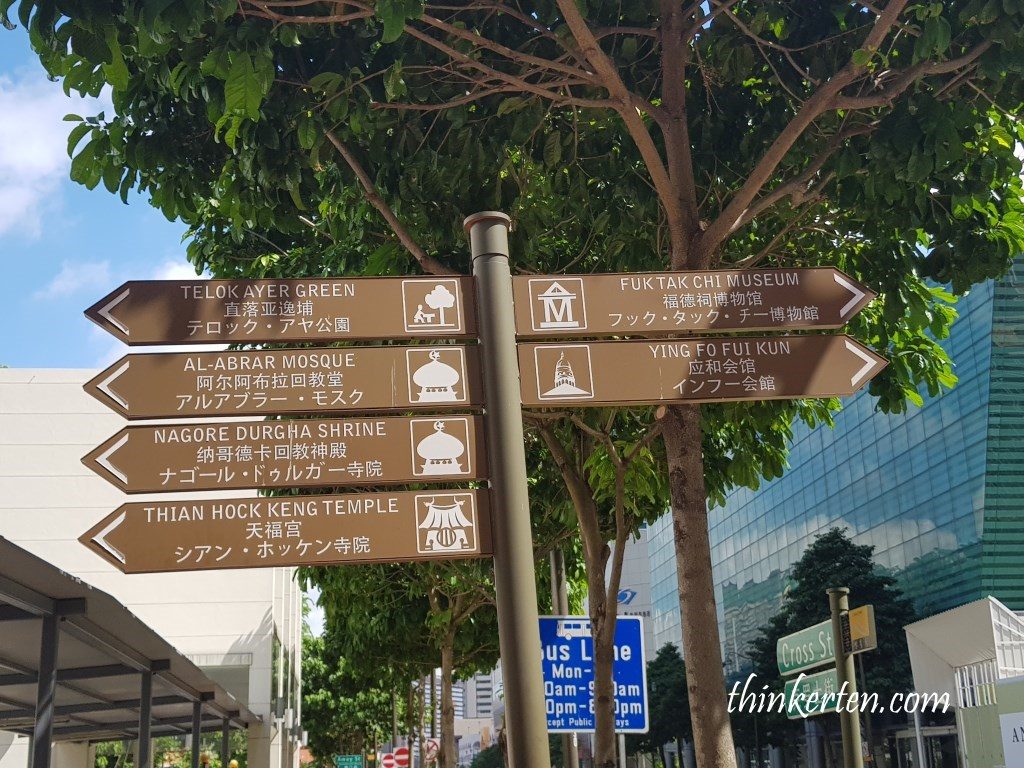 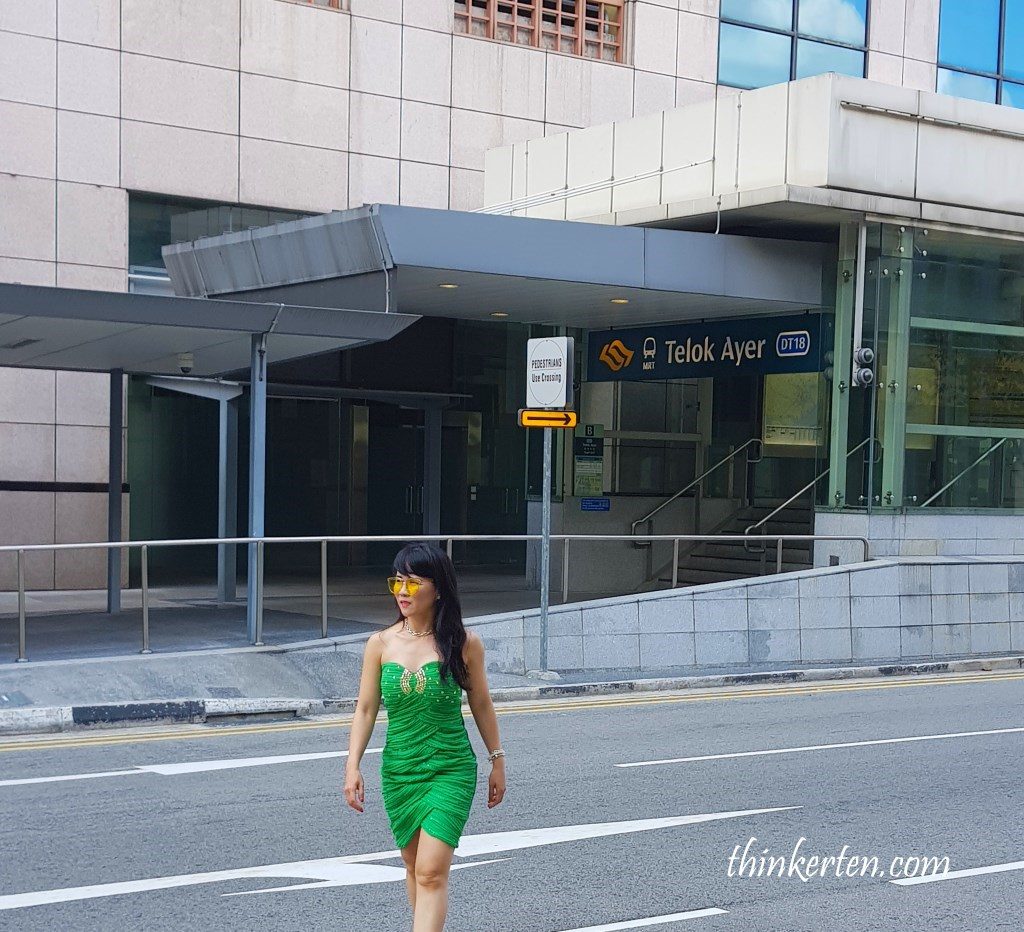 Thing to do in Telok Ayer Street Singapore