Fushimi Inari Shrine is famous for its thousands of vermilion torii gate. The Shrine was founded in 711 AD making it one of Kyoto’s oldest and most historic landmarks. If you are in Kyoto, Fushimi Inari Shrine should be in your bucket list too. This is another great spot to rent a kimono and shoot as many pictures as possible. 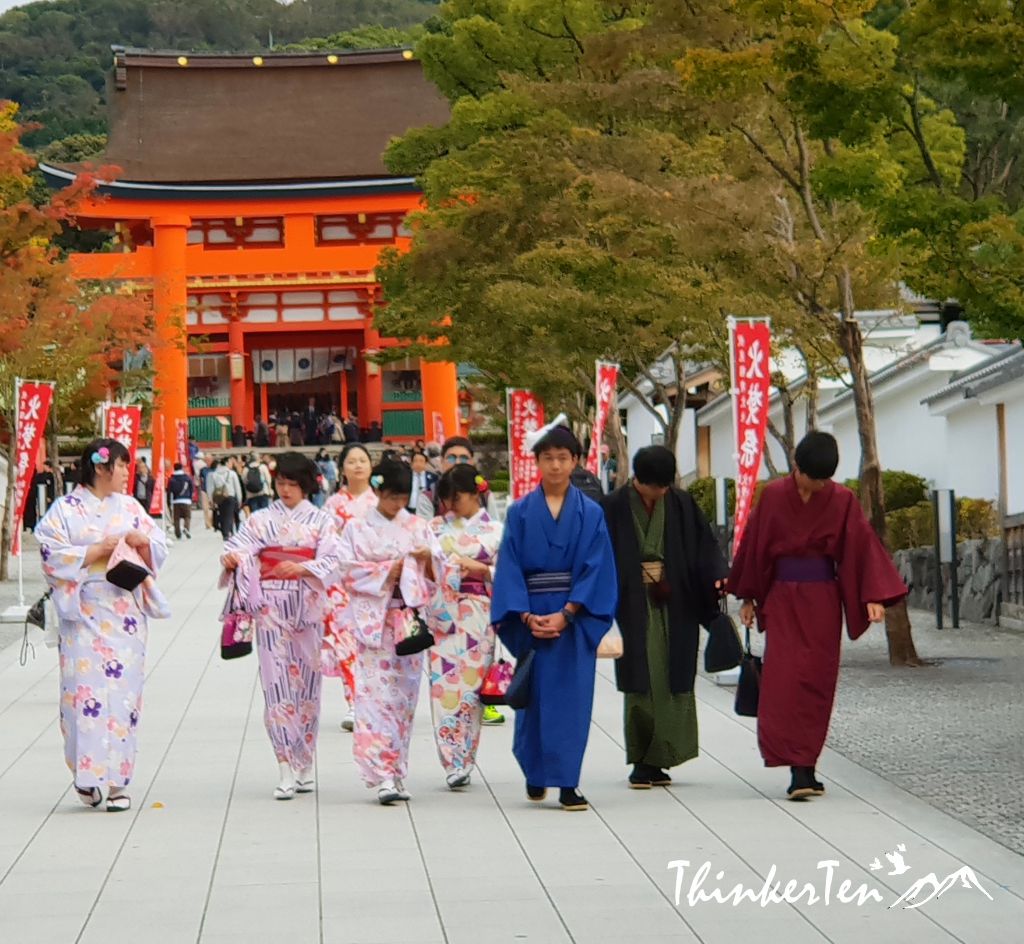 This is the main shrine of Fushimi Inari and behind it, there are thousands of vermilion torii gate waiting for you.

The shrine is at the base of the mountain which is name after Inari and it has many paths leading to the mountain. Some visitors would like to go hiking up to the top of the mountain. It takes about 2 to 3 hours depending on your speed and the crowd. At the summit, you are able to check out the view of Kyoto City. 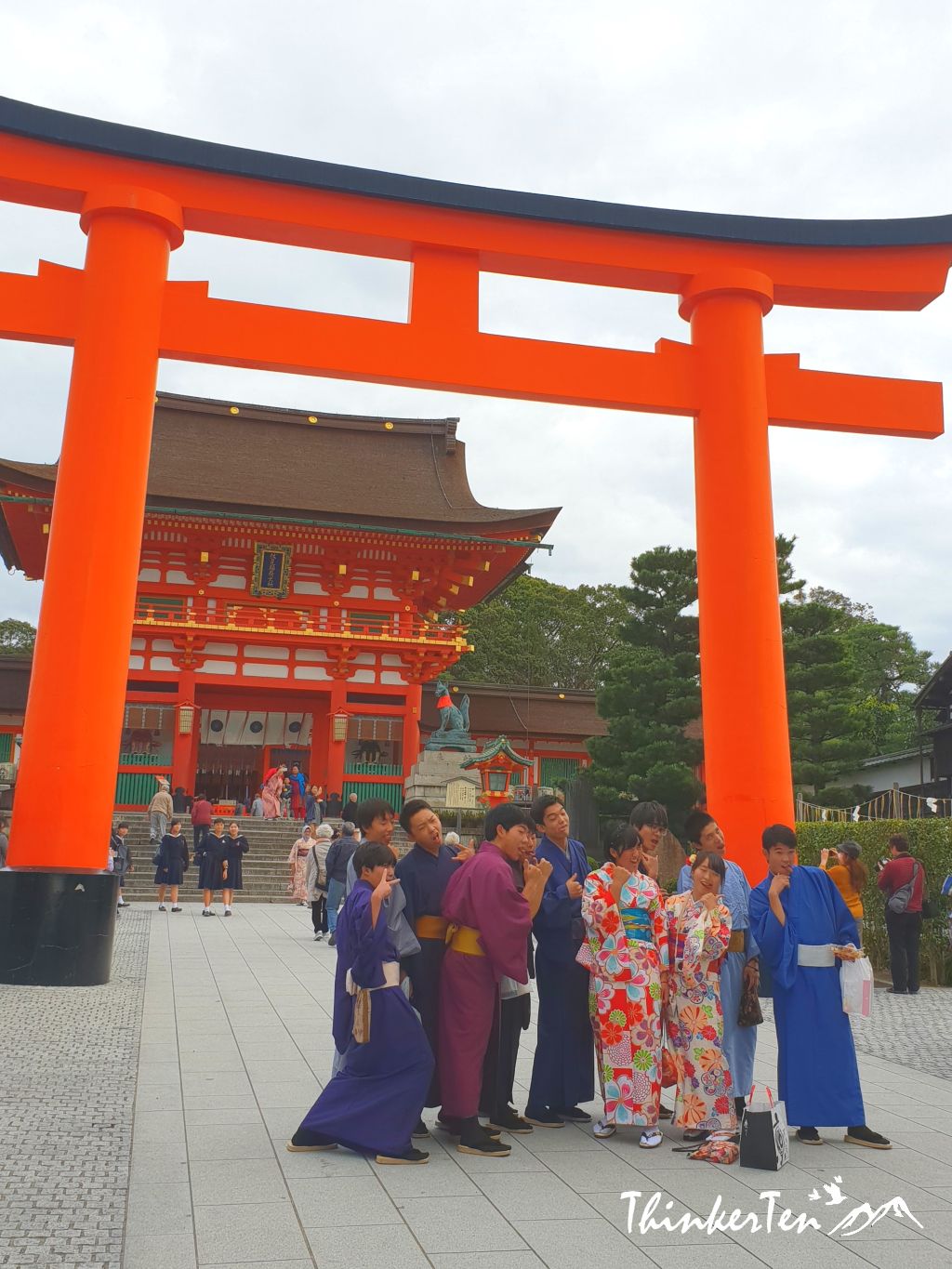 Trying out kimono is an experience and even for some Muslim friends too, kimono with “tudong” the headscarf. 🙂  Still very pretty.

Inari is the name of the Shinto God of rice so it is very closely related to business as having good crops, meaning prosperity and good success in business. 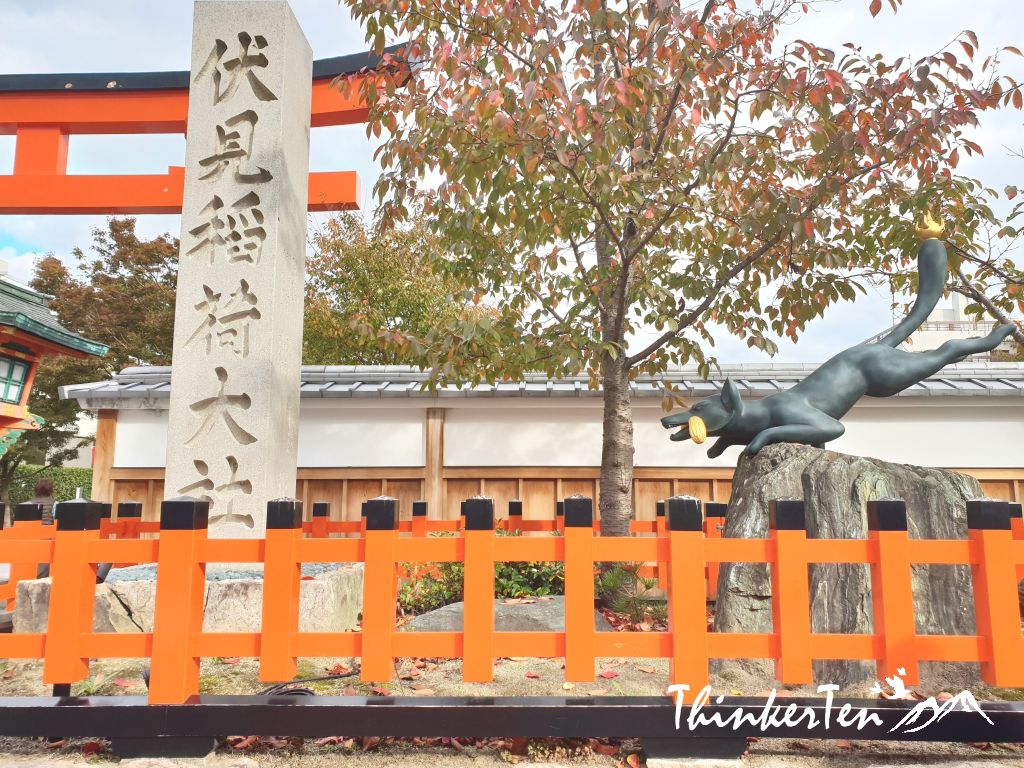 Fox as a messenger

There are foxes throughout the complex of Fushimi Inari, these animals are said to be messengers for Inari God.  Do look into the mouth of the fox, some of them are holding some objects, such as keys,  rice paddy, jewels or a scroll of message.  This is similar to Nara Kusage Taisha Shrine, where deer are the messager for the god there. 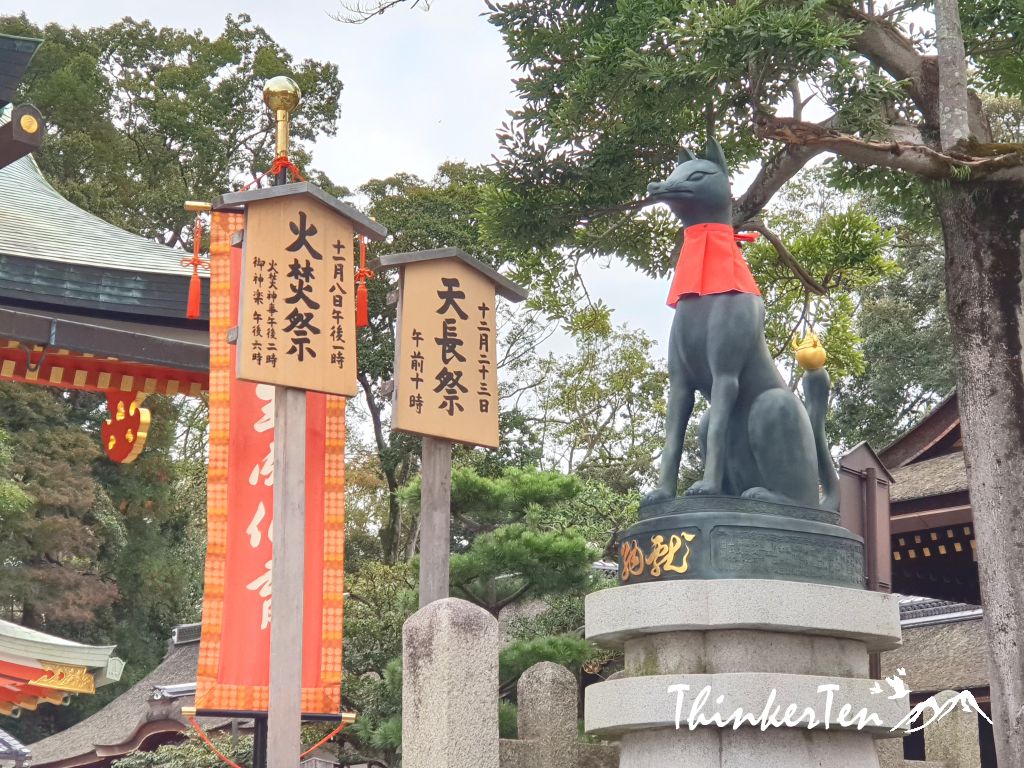 Have you wondered why some of the statues are in a red bib?  These are pretty common in shrines in Japan.  The other statues which can be easily found in Japan, the Jizo Sama, a baby looking statue (that’s dedicated to women who has lost their child), too has a red bid plus a red hat.  By the way, “kitsune” is fox in Japanese.

It is common to find a torii gate in any shrine in Japan but in Fushimi Inari, there are thousands of them. Similar reason with the lanterns donation in Kusaga Taisha Shrine, each torii gate is donated by company or organization to show their gratitude and hope for good fortune in their future.  The name of the donor is inscribed in black ink on each gate.  In most of the shrines in Kyoto, there is a fee to pay to enter, but here at Fushimi Inari Shrine, it is free of charge.  This is probably due to all the gates have been donated by a large number of companies, organizations, and people.  Hence there is no need to charge the visitors anymore. 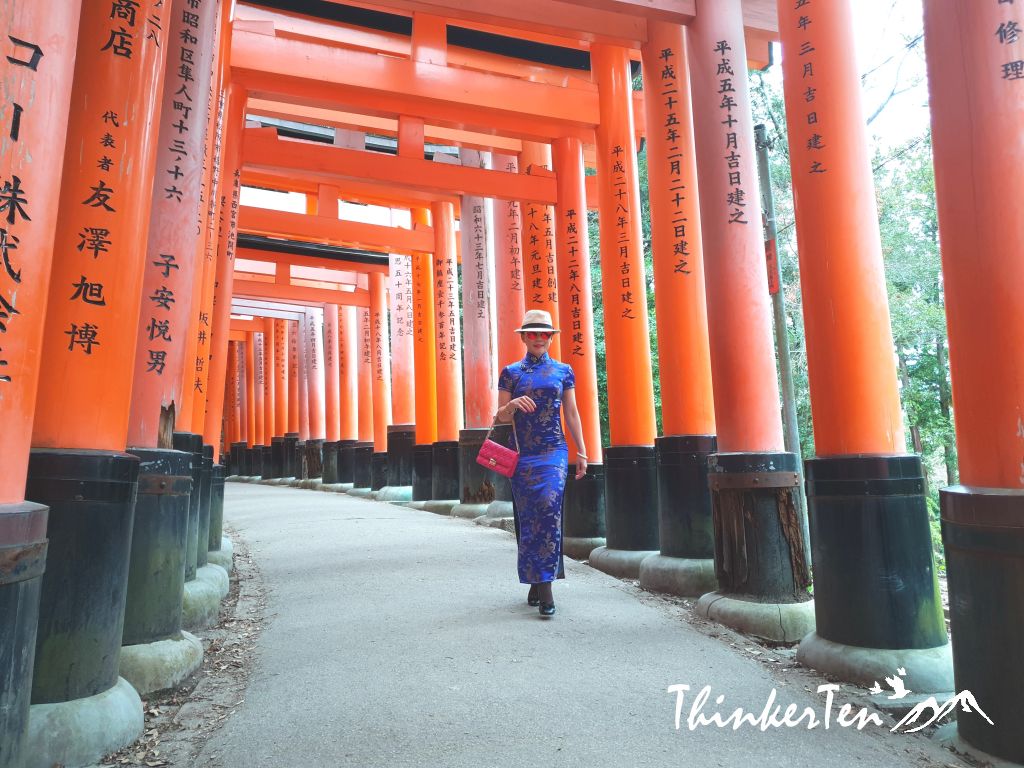 There is no closing time, literally 24 hours open.  Some people prefer to start their hike from the evening so that when they reach the top of the mountains, it is completely dark and they can see the lights (night view) of Kyoto city.  It can be a bit scary at night as there are not many lights along the path, you may need to use the flashlight from your cell phone. 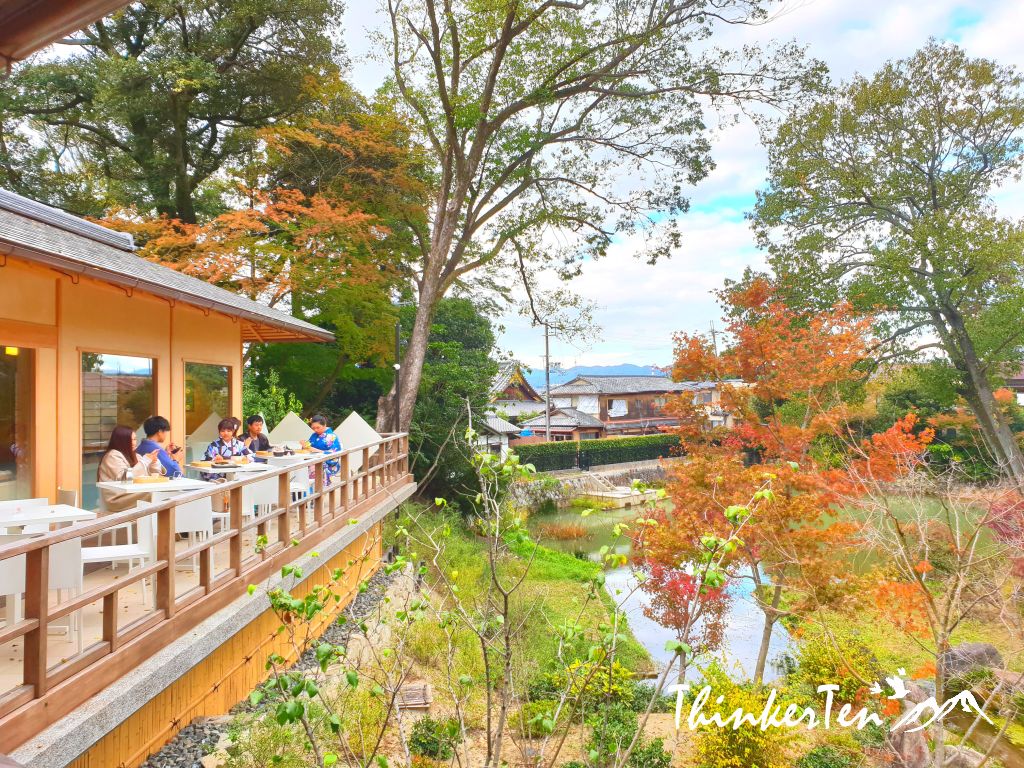 I think you can guess what it is.  Anything related to the “Kitsune” or white fox, be it key chains, lucky charms or even Kitsune /white fox’s mask. 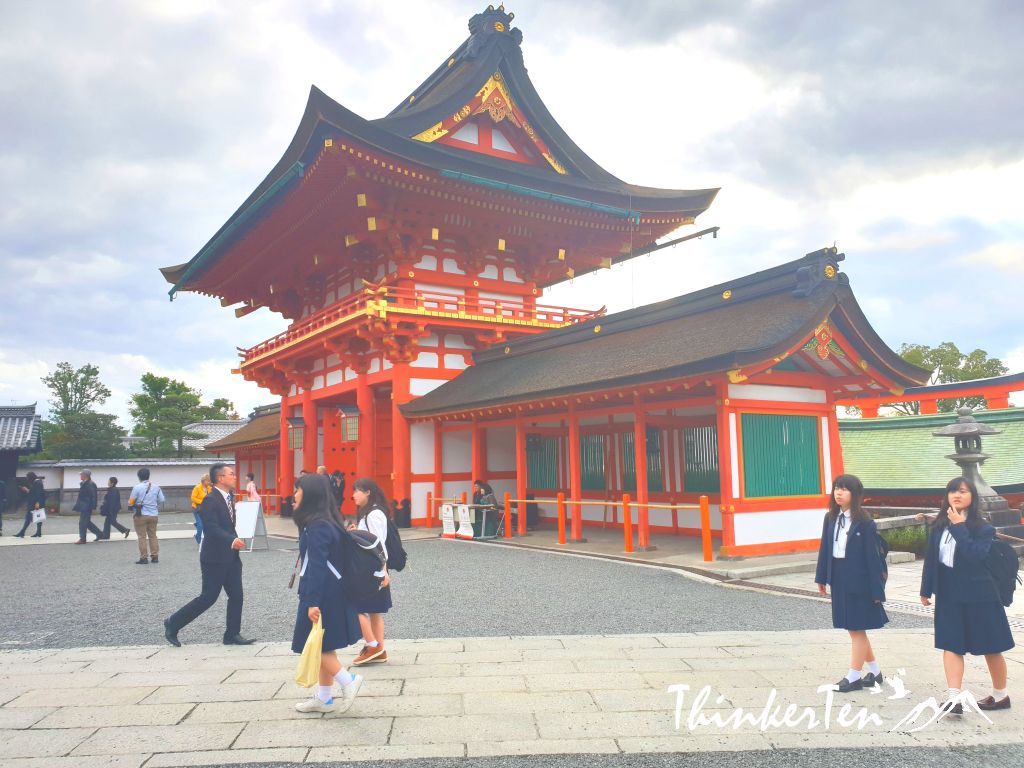 We spotted an ultra mini car on our way to the parking area. Such a compact car is said to be very popular in Japan but the maximum speed is only 60km/h.  There are only 2 seats available.  Don’t think you can drive this mini in the highway. 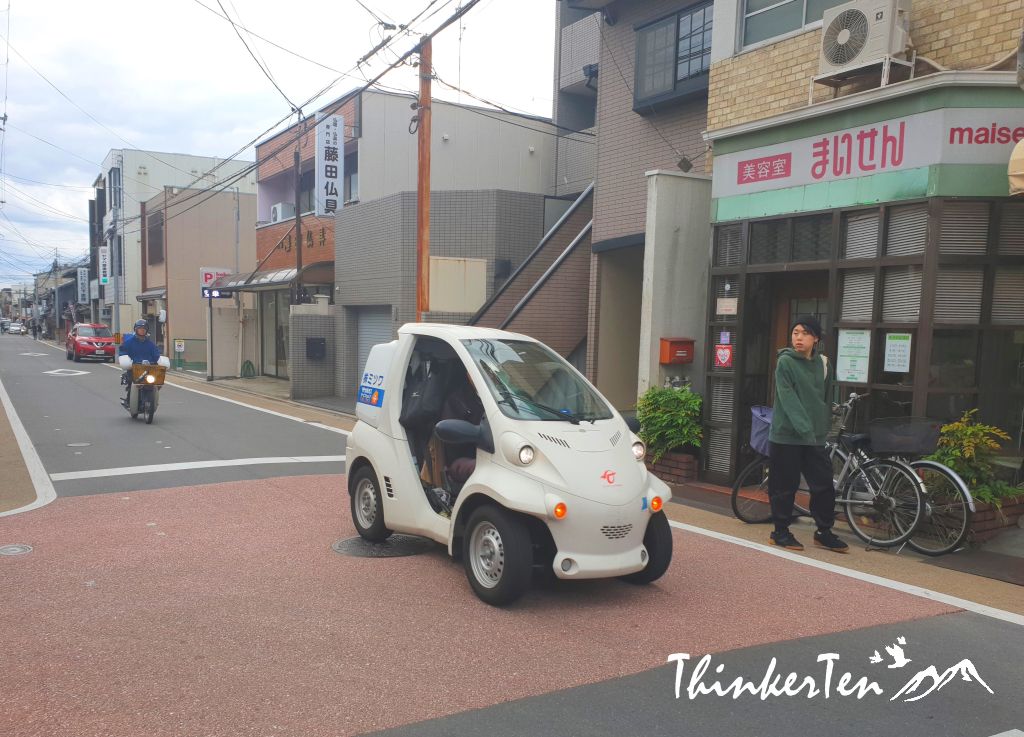 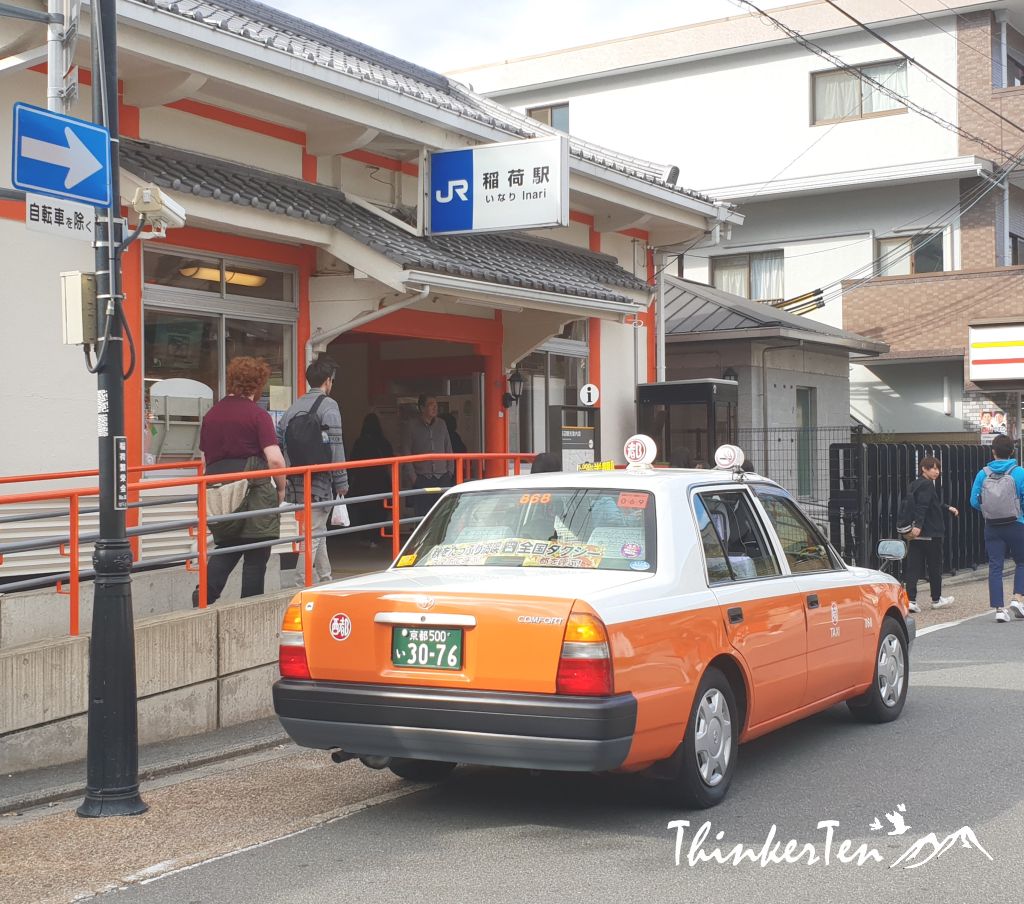 Our rental car cross over the rail track and Inari Station. 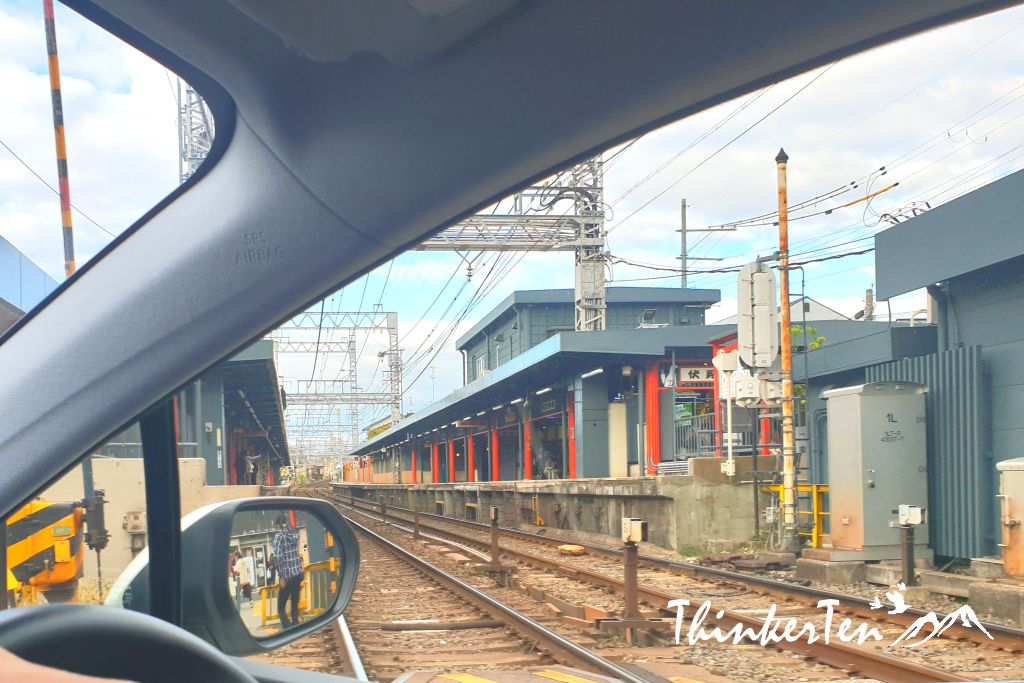 Fushimi Inari Shrine gets super popular after it appeared in one of the scenes in Memoir of the Geisha, a Hollywood movie.  The thousand vermilion torii gates are the selling point here.

Thank you for such an informative article, this place looks incredible 🙂

The toori gates are the icon here and people usually hike up to the mountains to check out the Kyoto city view.

I would LOVE to visit here. It looks so beautiful!!

Wow U should definitely plan a trip there ,looks amazing

Dear Ingrid,
Anyone who is doing Kyoto should include Fushimi Inari Shrine, this is one of the must see.

Every place you share with us is so beautiful. Every time I read one of your posts, I add another spot to my travel list.

Thanks for your comment. Fushimi Inari Shrine is another great spot in Kyoto. You can include it with Kyomizu Dera, Gion and Ginkaku and Kinkaku Temple. There are all in Kyoto.

Wow what beautiful pictures and an amazing place to see! I would absolutely love to visit here someday with my hubby :). Thanks for sharing!

You can rent a kimono in Fushimi Inari Shrine and walk around and shoot pictures too.

Some of the architect is amazing and well kept up. Thanks for sharing.

They have people or volunteers cleaning the torii gates and I can tell you is not easy to maintain thousands of them.

What a beautiful place to visit. I love the history behind it especially!

Dear Beeb,
The fox messengers are one of the icon and legend here.

They keep it so beautiful over there. You can tell they really respect their history and the places that speak of that history.

it is really beautiful that’s why Memoir of the Gesha was taken here.

Japan is on my must visit soon bucket list! Thank you for sharing all the beautiful photos. Now I really want to visit there!!

Kyoto is one of the must visit city if you are doing Japan tour, it has all the ancient history of the country.

I would really love to go to Japan one day. There is so much to see!

Japan is so affordable to visit now considering it is the first world country. Most people think Japan is expensive and in fact, it is not, food and accommodation are so much cheaper than country in Europe.

The Fushimi Inari Shrine does seem like a must-see place. The views from the hike must be beautiful. That’s really interesting about the fox being the messenger.

The fox messengers are the icon in Fushimi Inari and it is in white. Statues are all over the shrine and please pay attention at the mouth as it hold something in it.

Dear Annick,
Japan shrines has this special feature called torri gate which is also the symbol of the Shinto Shrine.

This Fushimi Inari Shine is so lovely. We haven’t been to Japan yet, but it looks so beautiful.

Japan is so unique to visit, it has the modern side and the ancient side of it. There are still plenty of nature and forest & mountains to see.

What an incredible place to visit. So beautiful. You always visit the most fascinating places.

Japan is so beautiful and so many things to see and experience. I love their hot bath in the open air.

I have never been to Japan, but reading this, am convinced to plan a visit there one day. Thanks.

Thanks for your reply. There are so many reason to visit Japan and my would be the food as it is so cheap compare to back home. Japanese food cost so much here but in Japan it is so affordable.

I would love to have a little car like that; I bet it’s easy to ind parking spot! Looks like a great adventure and an awesome culture to explore!

Haha, the little car looks super cute I have to agree. It is target for elderly people and tourists so you are right, easy parking. However, you can’t drive this mini car to the highway as it cannot go above 60 km/hr.

It is always so neat to see where famous films were actually filmed. Love how in tact everything still is!

wow, this is making me want to visit Japan!! It sounds like it would be amazing!

The Shrines in Japan are a must see when visiting Japan. My brother has visited and says it was one of the highlight of the entire trip. Glad that when I visit I’ll be able to have one up on him by wearing a kimono.

Japan has been on my bucket list. The photos on this article makes me want to visit the country.

Japan is one place I’ve not been to but am really wanting to. Beautiful pics, thanks for sharing.

Omg just love your photos!!! I had the chance to visit many years ago. Such an awesome experience

My husband lived in Japan for a little over two years. I would love to return and would definitely need to rent a Kimono since I don’t own one.