One of the best ways to experience Victoria Harbour is cruising. My recent experience of cruising was with the red junk boat called AquaLuna. Red Junk boats are considered one of the icons in Hong Kong besides the tall skyscrapers and neon lights. 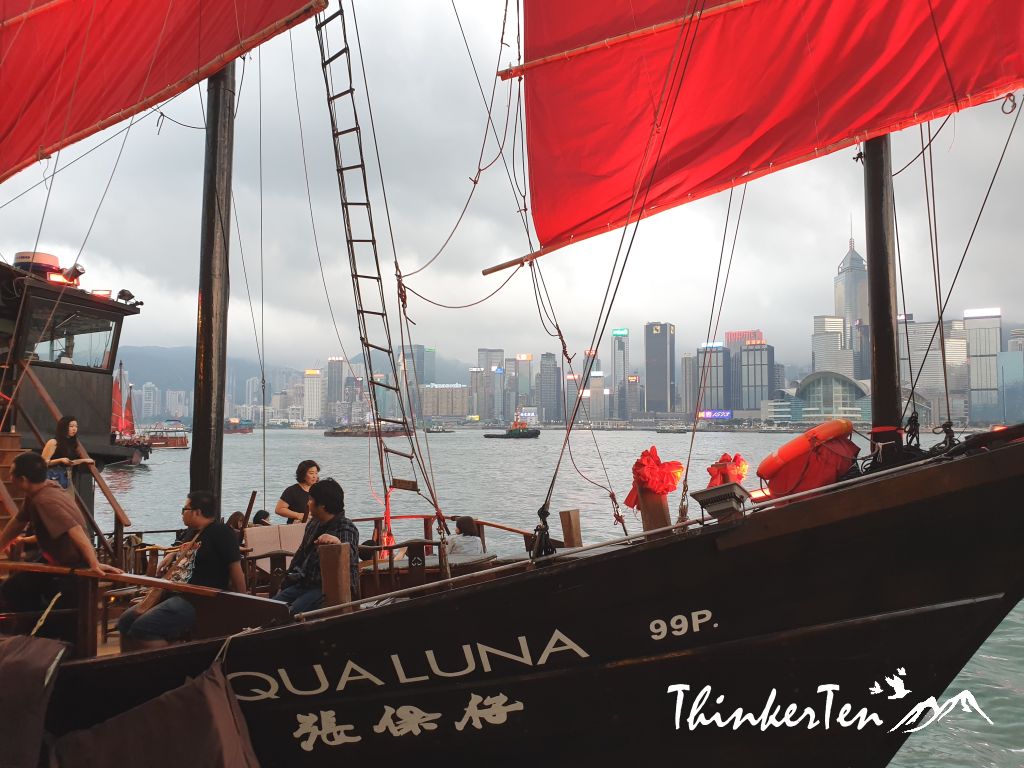 The Aqualuna was created using old designs and traditional materials by an 80 years old local craftsman.  AquaLuna is also known in Cantonese as the Cheung Po Tsai 張保仔.  Cheung Po Tsai was an infamous Chinese pirate during the 19th century.

The red junk boat operating in Victoria Harbour. It has two decks, an upper deck cabin with big lying sofa and a lower deck with chairs. 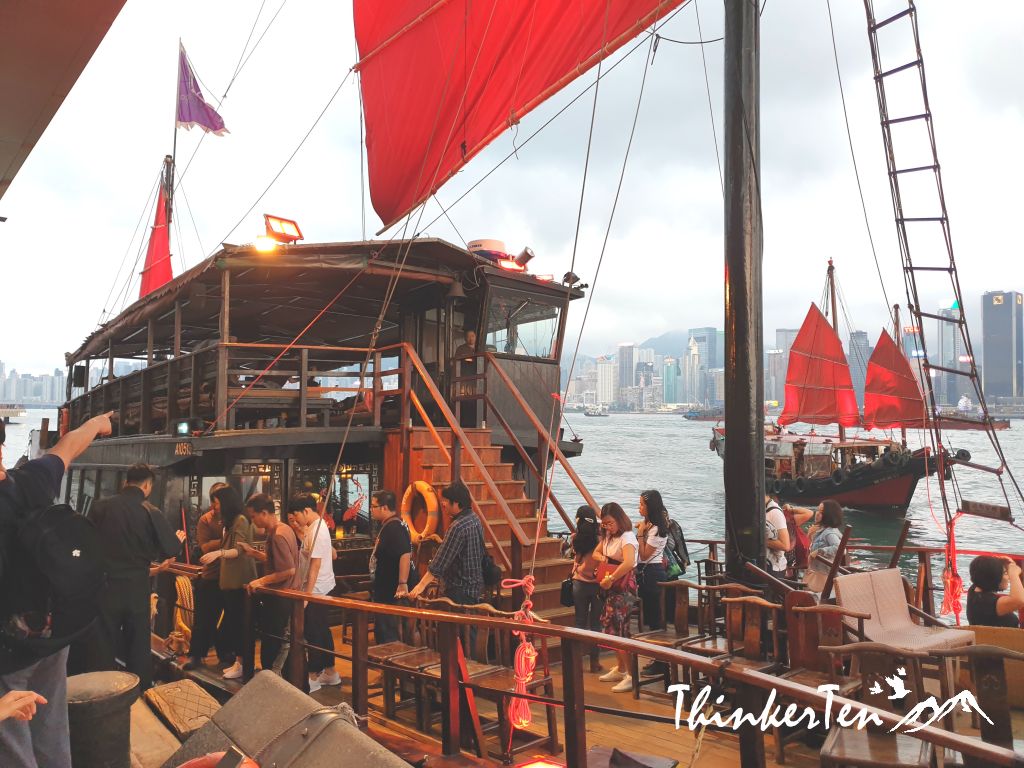 The boat looks super cute with the red sails which represent Hong Kong. It has a very romantic atmosphere and nice music. We choose to sit at the front deck so we could enjoy the breeze and the colorful neon lights of Hong Kong skyline.

The ship looks old but in fact, it is relatively new ship, it was built in this old fashion way. The red sails are purely decorative and the barge is motorized.  The boats are based on nostalgia rather than practicality. It is also great for photos opportunity.

According to the ancient Chinese legend, the color appeases the dragon which lives in the clouds and brings bad weather.

The junk boats made me think of Chinese admiral Zheng He (1405-1433), he is thought to have built the largest junks in history. He had a fleet of about 300 ships with 30,000 crew during the 15th century. On contrary the fleet of Columbus (1492-1499) was so much smaller, with a fleet of 17 ships, carrying only 1200 men. Columbus only has 5% of Zheng He’s fleet. Also, Zheng He’s fleet was built almost 1 century ago or to be exact 87 years earlier than Columbus’s ship and yet a lot bigger. 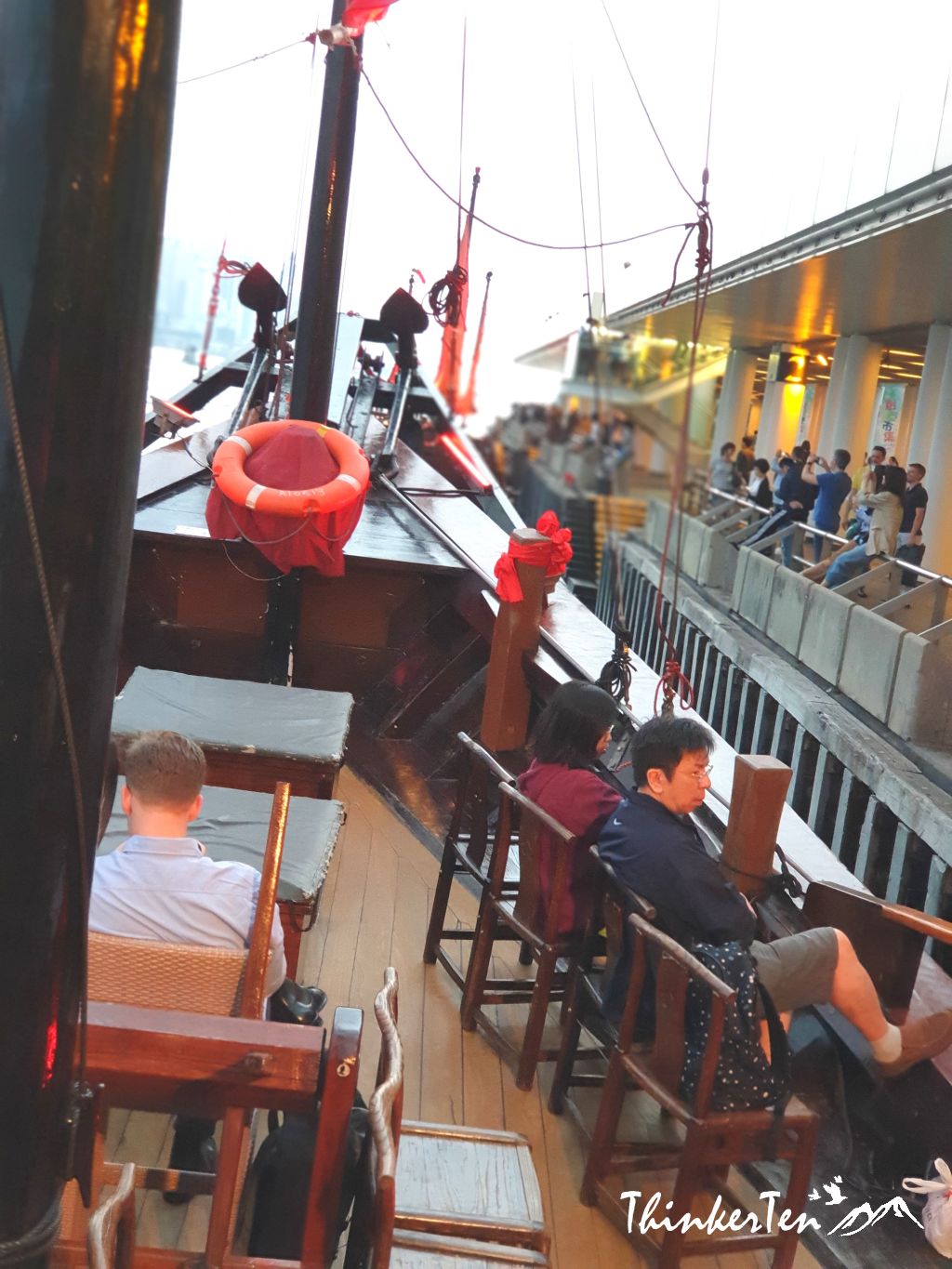 Which Pier to board?

Below is Central Pier 9 which near Hong Kong Ferris Wheel. 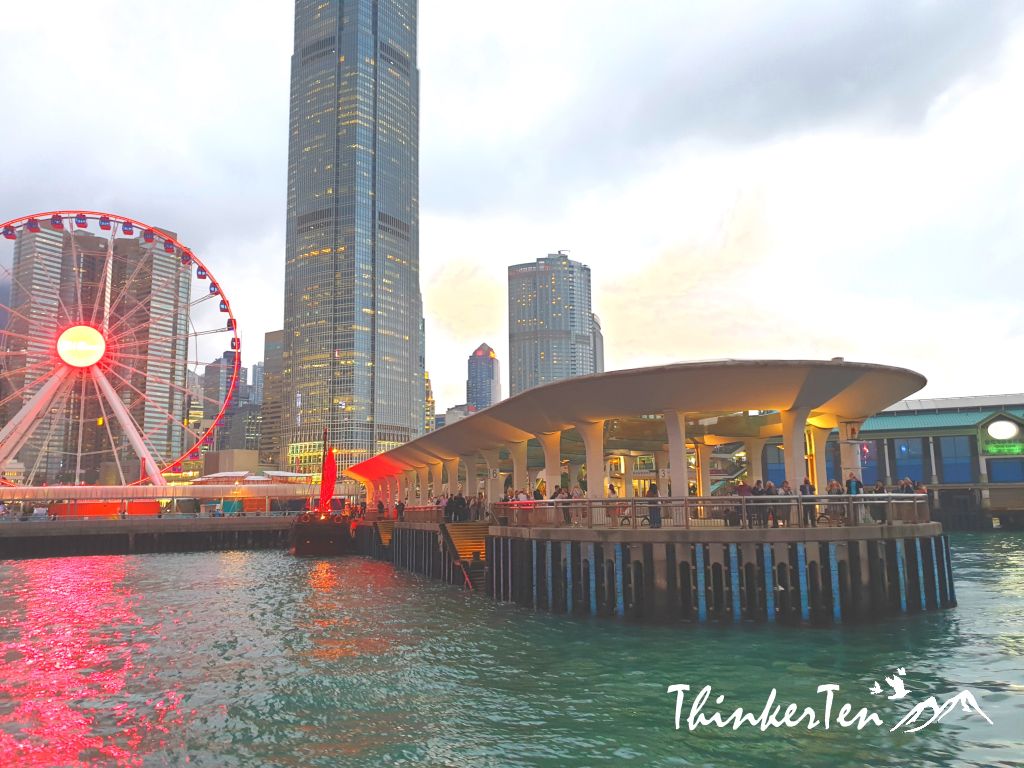 The boat can accommodate 80 passengers in addition to the crews.  Once you are seated, the crew will ask what kind of drink you want to have.  Yes, the cruise ticket comes with a complimentary drink.  You can have wine, beer or soft drinks. 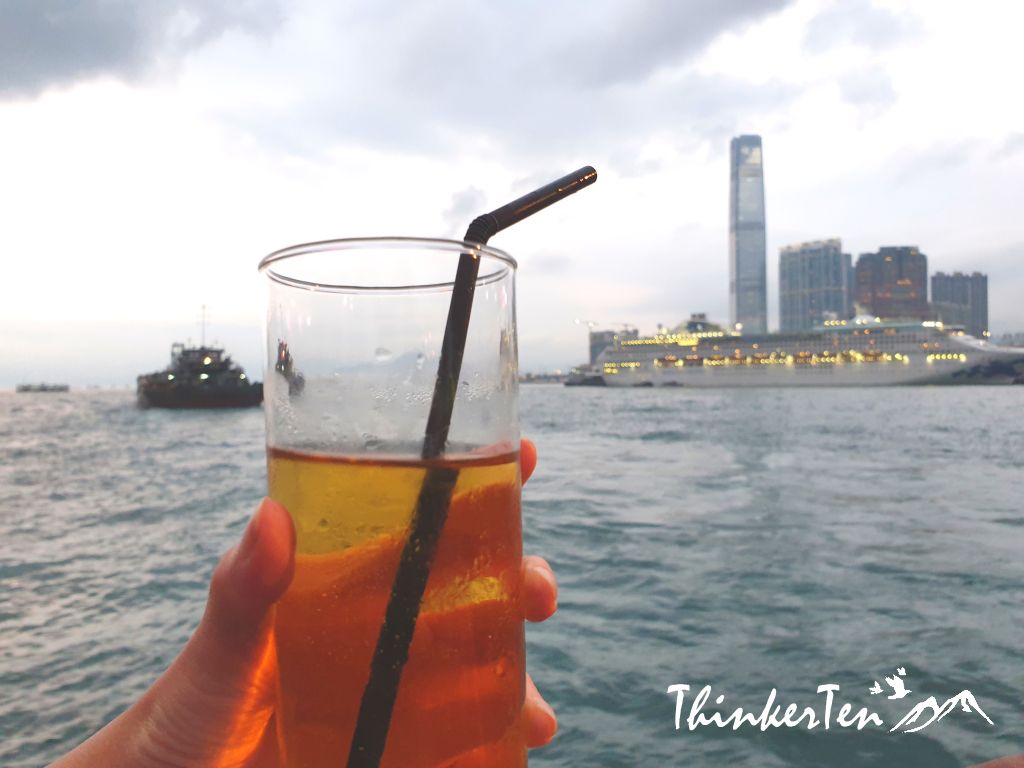 Sunset is always the best timing so choose 6.30pm timing if possible. This time frame is the magic hour and a special time for photography. The light before sunset is simply unique.

I highly anyone who wishes to do cruising to book the ticket in advance (online with Klook) to enjoy the discount and confirmation of seats. Print out your ticket or a mobile voucher to show to the staff before boarding Aqua Luna. 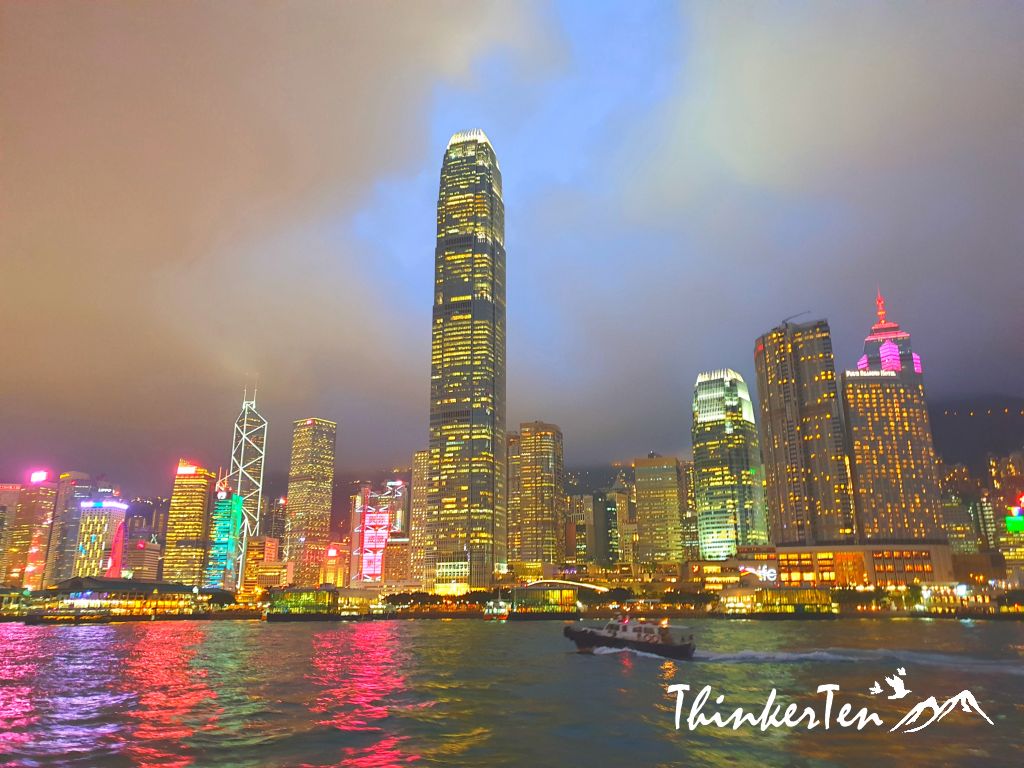 When it is completely dark

When it is completely dark (see below).  Which is better?  I am sure you prefer the golden hour that is in the evening, slightly before sunset.  (above picture) 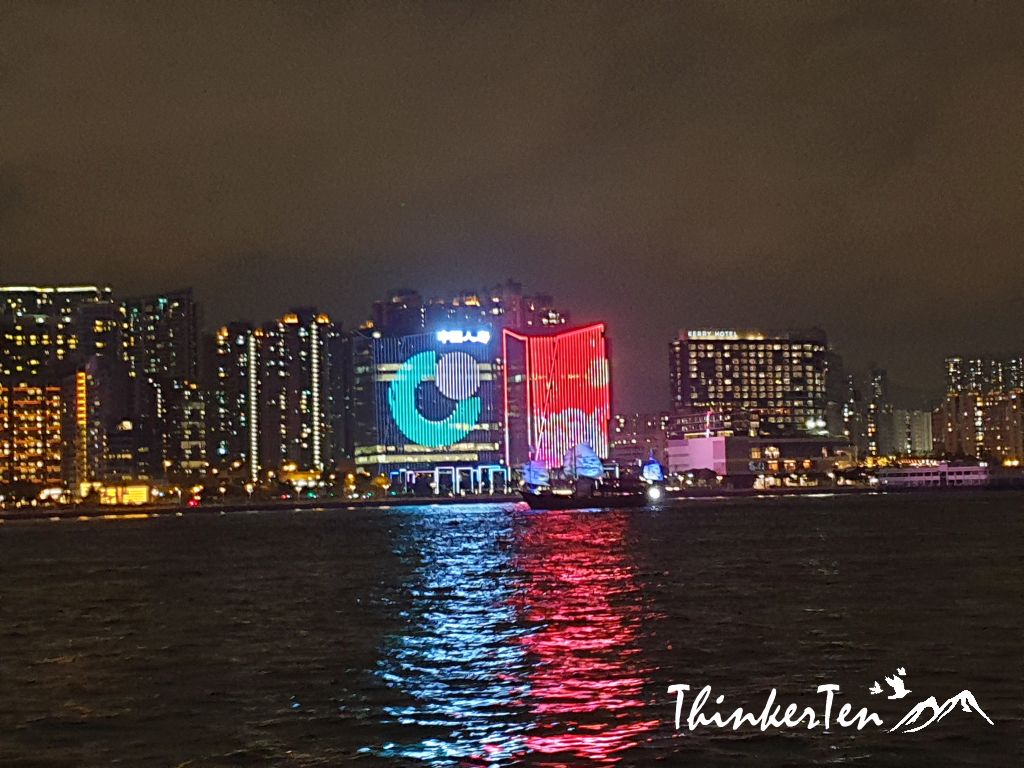 This is the upgrade version of Aqua Luna, introduced in April 2017.  It is slightly bigger and the sails are in blue and white which is decorated with Chinese dragons. 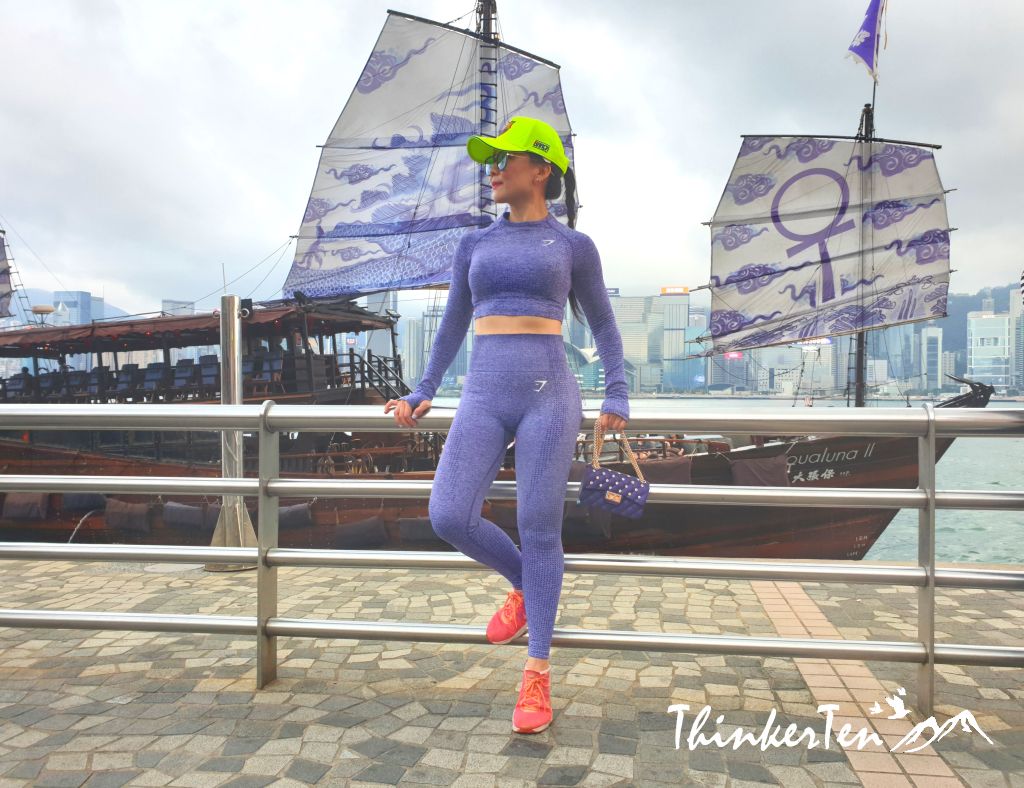 This is highly recommended and you get to see both sides of the harbor when you are on the boat for an hour cruise. Book online to secure the perfect timing at 6.30 pm and board on Tsim Sha Tsui Pier 1, that way you get to choose the best seat.

10 Things to do in Mongkok 旺角, the crowded corner of Hong Kong!

It’s been a long time since I was in Hong Kong, so I’d love to take this boat, especially at sunset. It’s good it comes with a free drink too!

You are right, taking a cruise during sunset is the best thing to do in Hong Kong Victoria Harbor. Highly recommended.

Hong Kong has always fascinated me and this way to visit it is wow … definitely special and unique!

Hong Kong is famous for its skyline and neon lights and the best spot to view it is Victoria Harbour.

Hahaha that sure doesn’t LOOK like a junk boat!This looks amazing. I feel like I’ve seen them do this on Food Network or some foodie show and I’ve been dying to do it ever since

That sounds like such an amazing way to experience the city! I would love to spend some time on that boat just enjoying the skyline.

Sailing with the red junk boat is a memorable experience in Hong Kong!

I hope you get to visit Hong Kong soon. Do it with Macau if possible as people usually include Macau too.

What fun way to explore! I will def have to try that on my upcoming trip to hong kong

Explore with a cruise is really a romantic experience. I did it with Aqualuna cruise, booked online in order to secure a seats, else you won’t be able to get a seat as the crowd is huge.

Wow this is beautiful and also like a new adventure. Am sure it was a beautiful experience.

This is such a stunning little adventure! Hong Kong’s skyline looks absolutely stunning. I’ve had layovers in HK airport twice now but have yet to actually explore the city!!

Hong Kong skyline is beautiful, full of colorful neon lights at the Victoria Harbor. The food and shopping are pretty amazing too. You should visit Hong Kong one day when you are doing transit.

Love this post from you esp I love to travel, gonna check out this & hope I can travel on this boat soon one day in HK
Thanks so much for this lovely travel story with all lovely captures
cheers, siennylovesdrawing

Thanks for your kind comment. Do remember to book online and the best timing is 6.30pm slot. That’s the golden hour for photography.

I’ve never been to hongkong, but I’d love to! That city view is everything. Beautiful city.

Hong Kong is the city for shopping and food, some of the icons here are the red junk boats and the skyscrapers.

Thanks for sharing this nice activity to do in Hong Kong. I would love to go for cruising along Victoria Harbour.

Thanks for your kind comment. The cruise also come with a complimentary drink, alcohol or non alcohol.

This should be a fun place to explore with family and friends. I could use some of that drink, too!

Seems like a great location to see. We’re always looking for family-friendly locations when we travel.

You may want to visit Hong Kong Disneyland and Ocean Park, it is great for the whole family.

Never been to Hong Kong but that place looks very vibrant to relax and unwind. Looks like you had a great time there!

Hong Kong is also famous for it Dim sum, the small snacks available from early in the morning 6am till late. The price is also very cheap.

What season is there now? I love the night view. I have never been in Hong Kong yet. I would love to visi it.

I think a boat ride along the harbor is a must while visiting Hong Kong! You look so fit too!