Most of the sites in UK need expensive entrance fees but visiting British Museum is free!  I was actually so shock at the vast collection of treasures in the British Museum.  It is considered one of the top museum in the world.  It is as famous as Louvre Museum in Paris, except Louvre has more arts painting.   You could spend hours inside this huge museum as it display treasure around the globe.  I am sure your eyes will pop out and your jaw will drop when seeing all these treasure.  I really can’t believe admission for British Museum is free and it has so much to offer!  Everywhere I go in UK, there is an admission fees; the castles, the museum, the colleges in Cambridge University, Cathedral, Abby, the parking.  And how can you not visiting British Museum while in London?  You will miss out so much!

British Museum is so huge, If you don’t have all day to explore British Museum, these are the top 15 artifacts not to be missed.

The Nereid Monument is a sculptured tomb from Xanthos in classical period Lycia, close to present-day Fethiye in Mugla Province, Turkey. I wondered how the British ship these big monument back here? 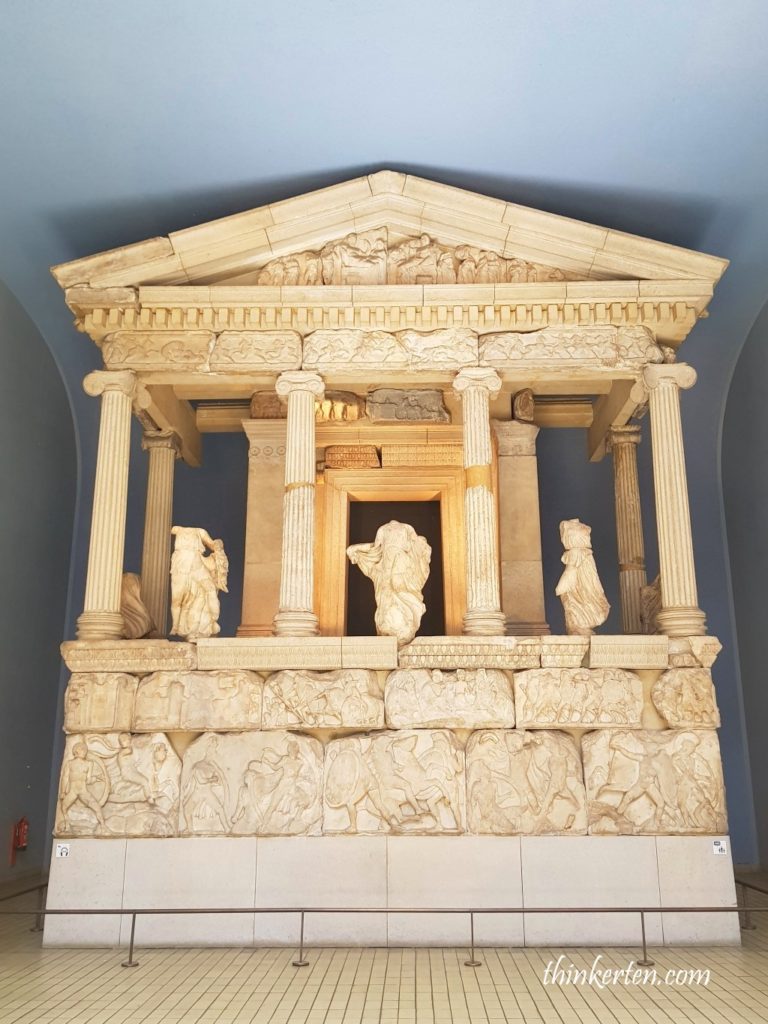 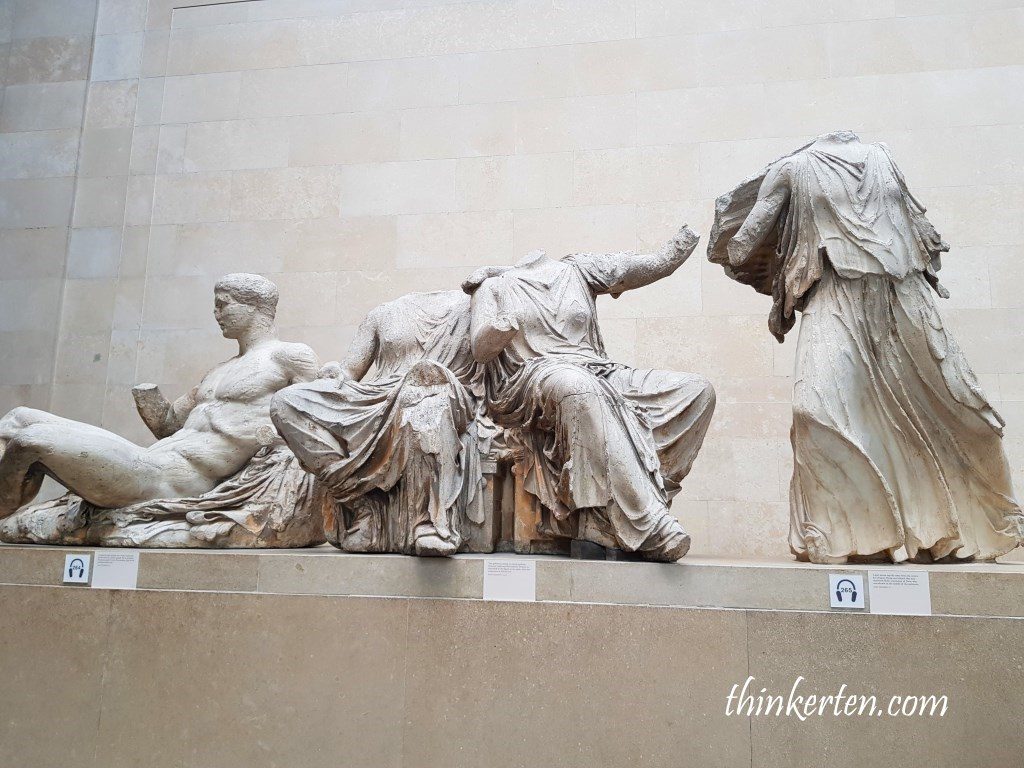 The Elgin Marbles also known as the Parthenon Marbles, are a collection of Classical Greek marble sculptures made under the supervision of the architect and sculptor Phidias and his assistants. They were originally part of the temple of the Parthenon and other buildings on the Acropolis of Athens. The temple’s great size and lavish use of white marble was intended to show off the city’s power and wealth at the height of its empire. Now part of the pieces end up in British Museum.

There is a debate going on whether to return the treasure back to Greece. 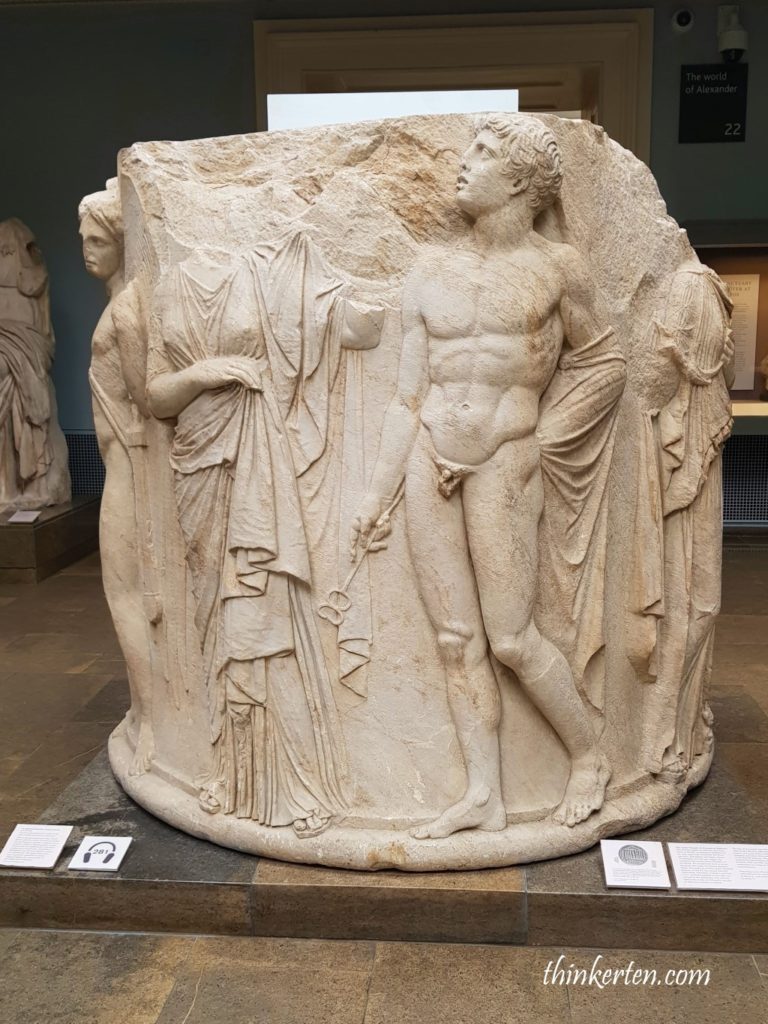 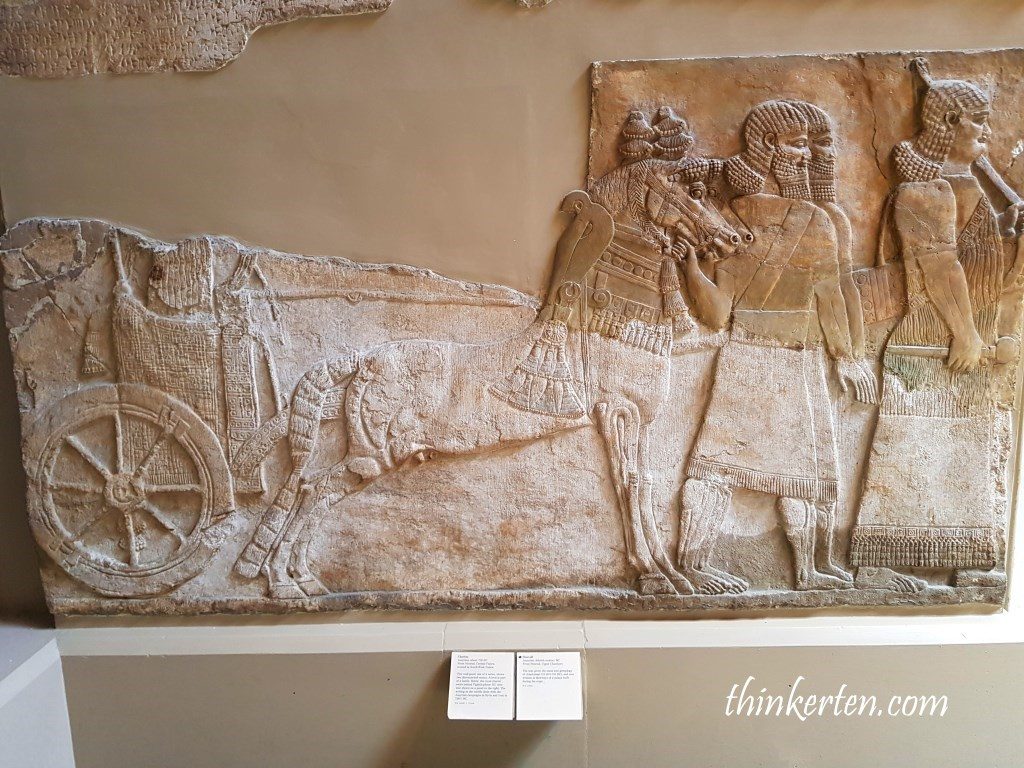 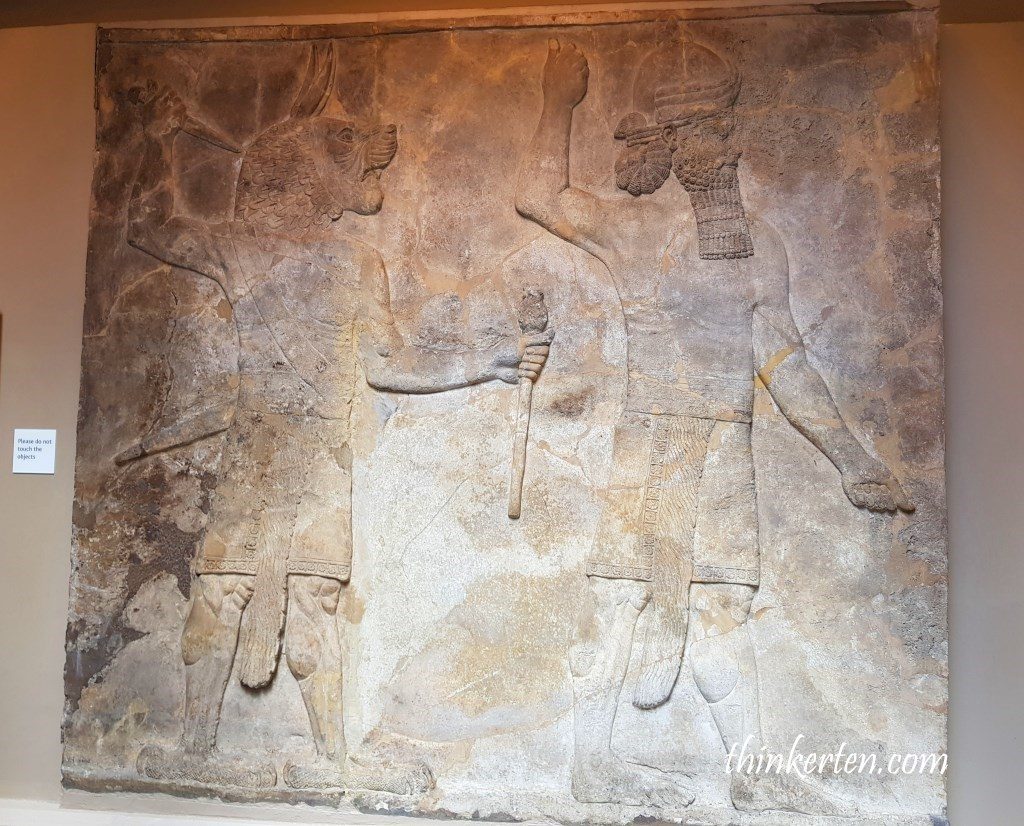 A sarcophagus is a carved, a stone container that usually houses a coffin and an Egyptian mummy.

5.Bust of Ramesses -A mighty pharaoh and a poet’s inspiration

Ramesses II is known as one of Egypt’s greatest pharaohs.  The heavy Statue is 3,200 years old discovered in 1820.  Who is Ramesses II?  Ramesses II, one of the most illustrious kings of ancient Egypt. He ruled his empire for almost 67 years during the thirteenth century BC.  He also called himself the “ruler of the rulers”

The stone is a piece of black granite inscribed with three different scripts used in Egypt at the time of its creation. The stone was found by Napolean’s army in the town of Rosetta on the Mediterranean coast of Egypt. After the defeat of the French by British, the stone was handed over to British.

The Rosetta Stone is so important as it act as a “key” for scientists to unlock the Egyptian Hieroglyphs/picture or symbols.  If it were not for the Rosetta Stone archaeologists would not be able to translate Egyptian hieroglyphics. Therefore the Rosetta stone has been essential to the modern knowledge of ancient Egyptian literature and civilization. 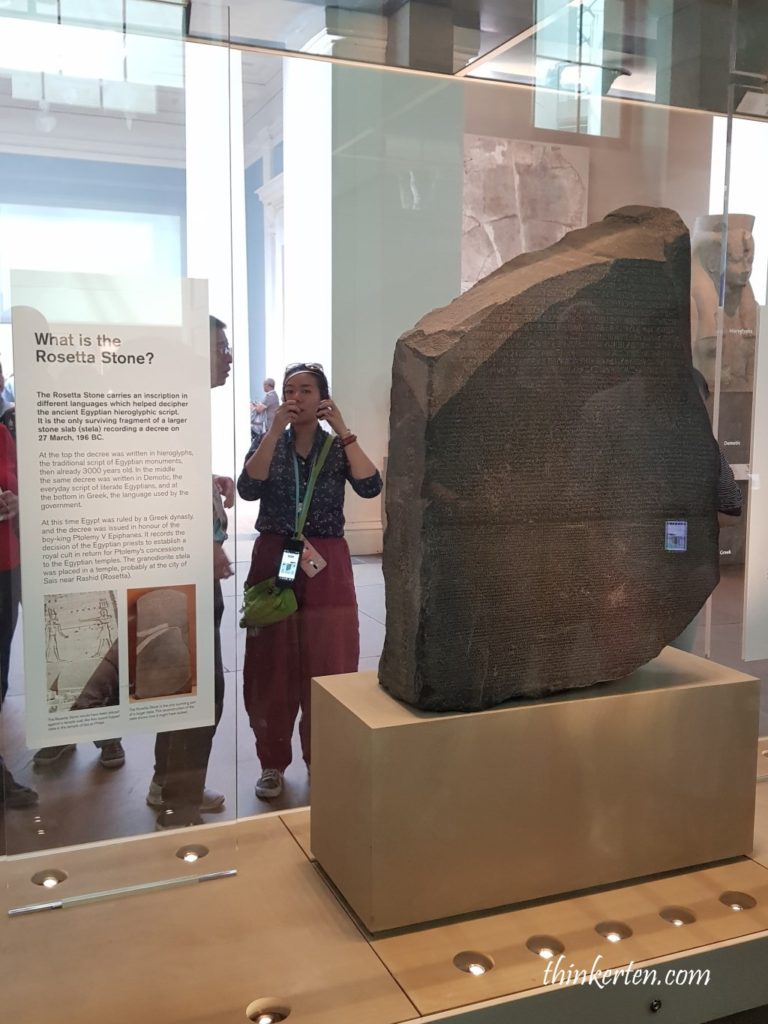 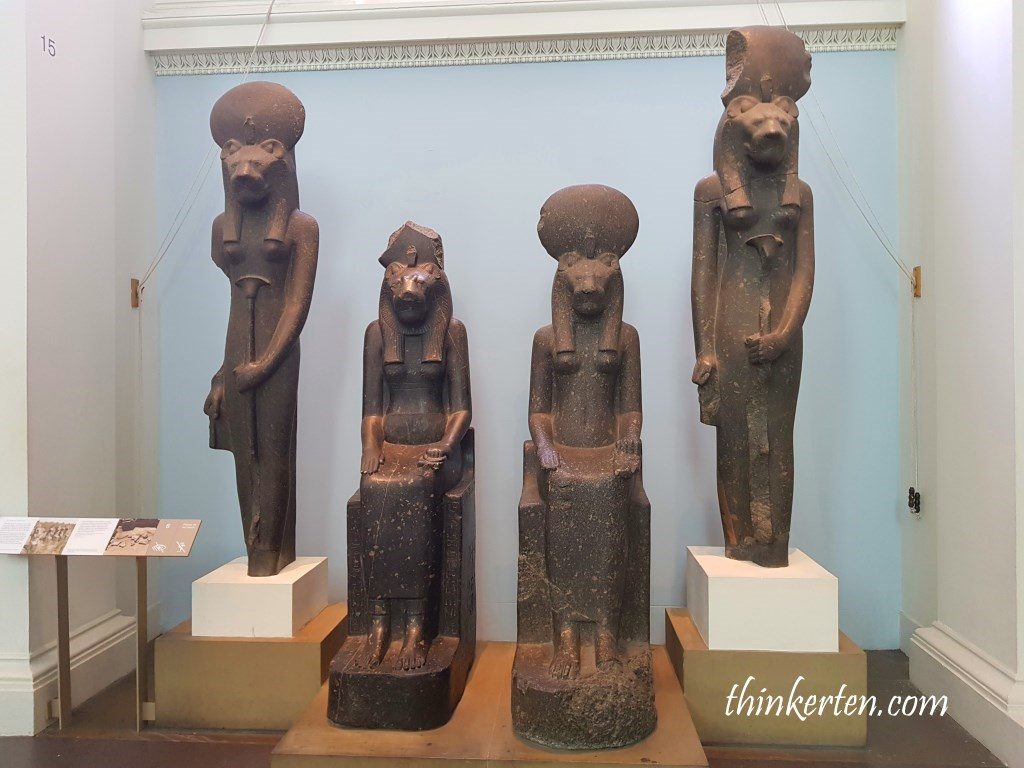 The big head is quite huge, you won’t be able to miss this big head! Amenhotep III, also known as Amenhotep the Magnificent, was the ninth pharaoh of the Eighteenth Dynasty of Egypt. 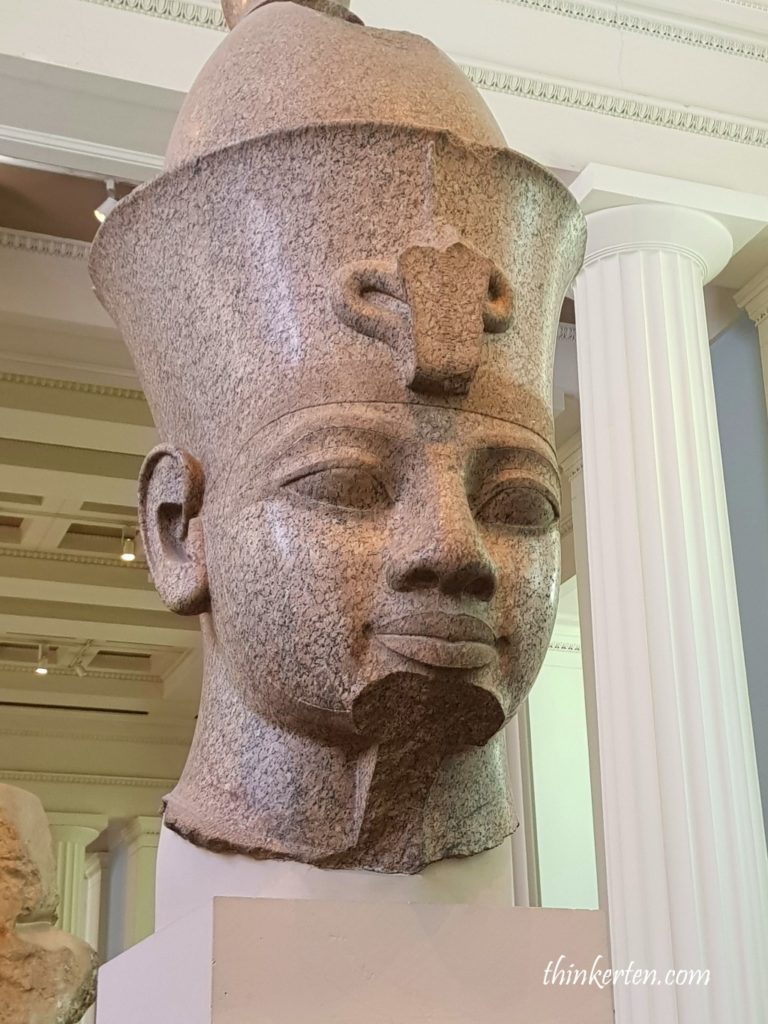 This cute statue is called Statue of Idrimi!  You would look at this statue for sure as it look different from the rest of the statue.

The Statue of Idrimi is an important ancient Middle Eastern sculpture found at the site of Alalakh, (Hatay Province, Turkey) by the British archaeologist in 1930.  There is inscription on the statue written in Akkadian, telling his story.  He eventually became King of Alalakh for 30 years ( 15th century BC). 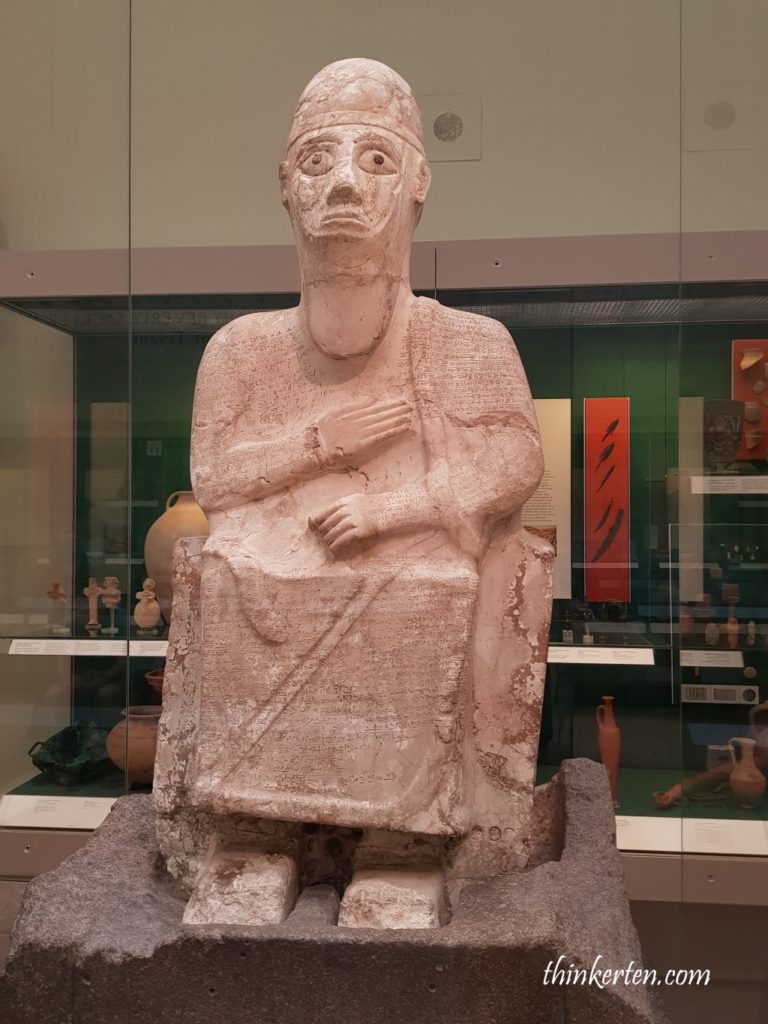 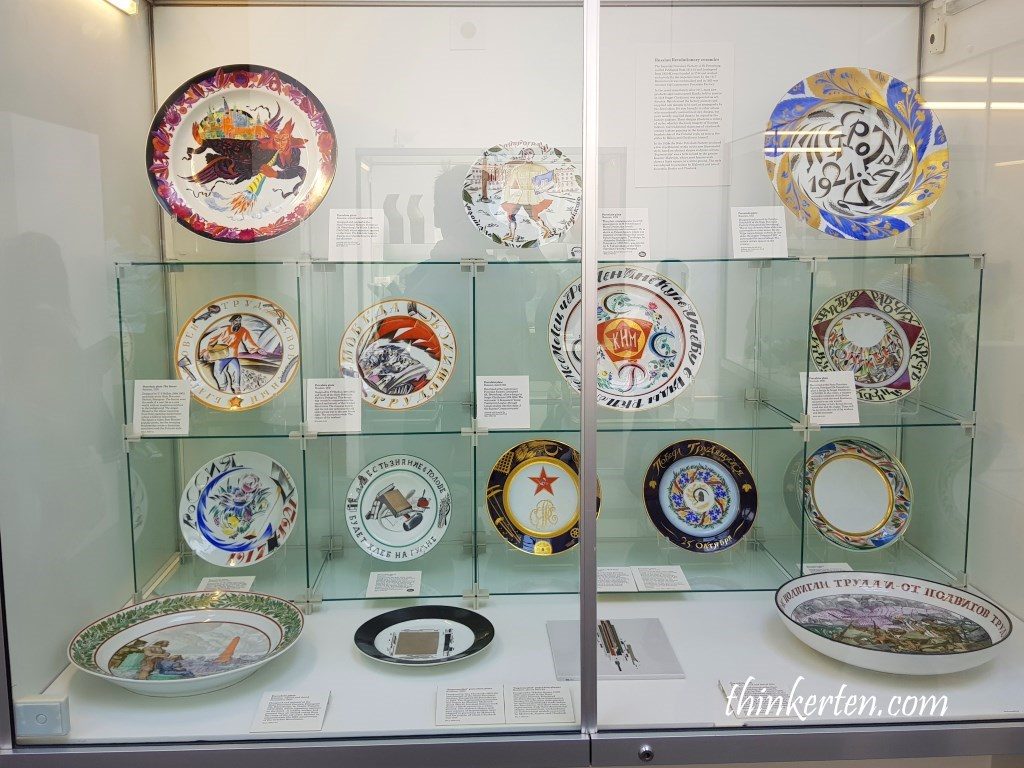 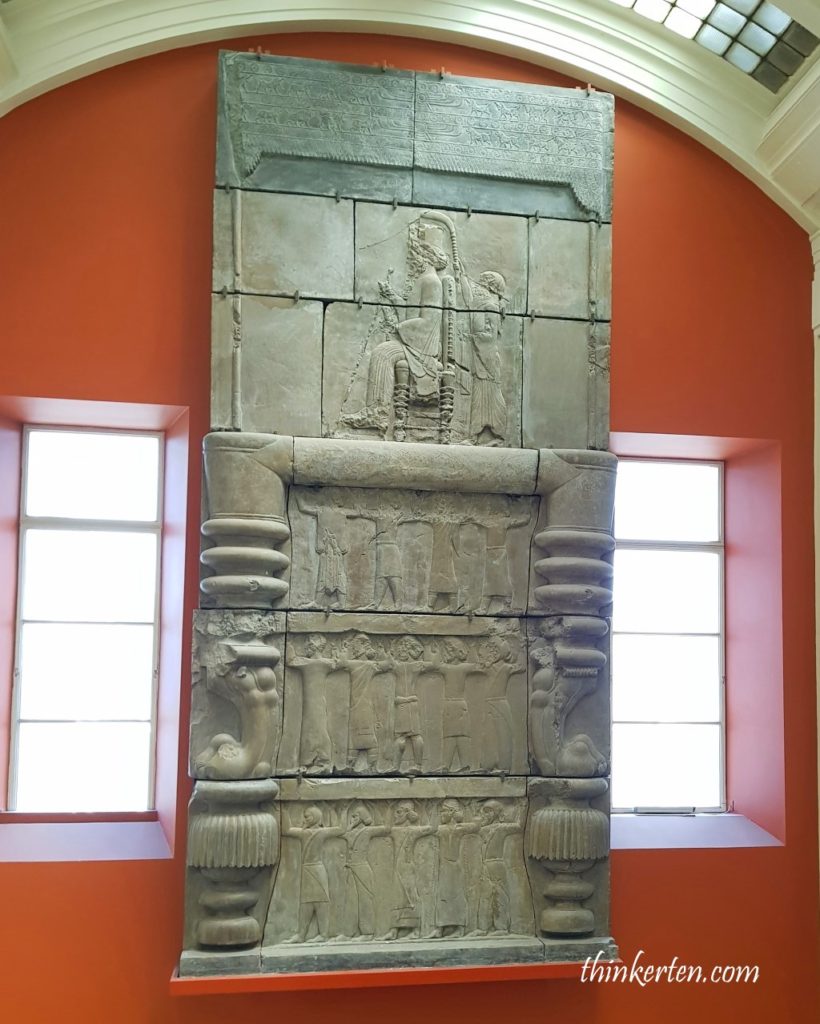 The Waddesdon Bequest, the superb collection of medieval and Renaissance treasures, a donation from The Rothschild Foundation.  The pieces of treasure are so beautiful as all made with superb artwork and intricate details. 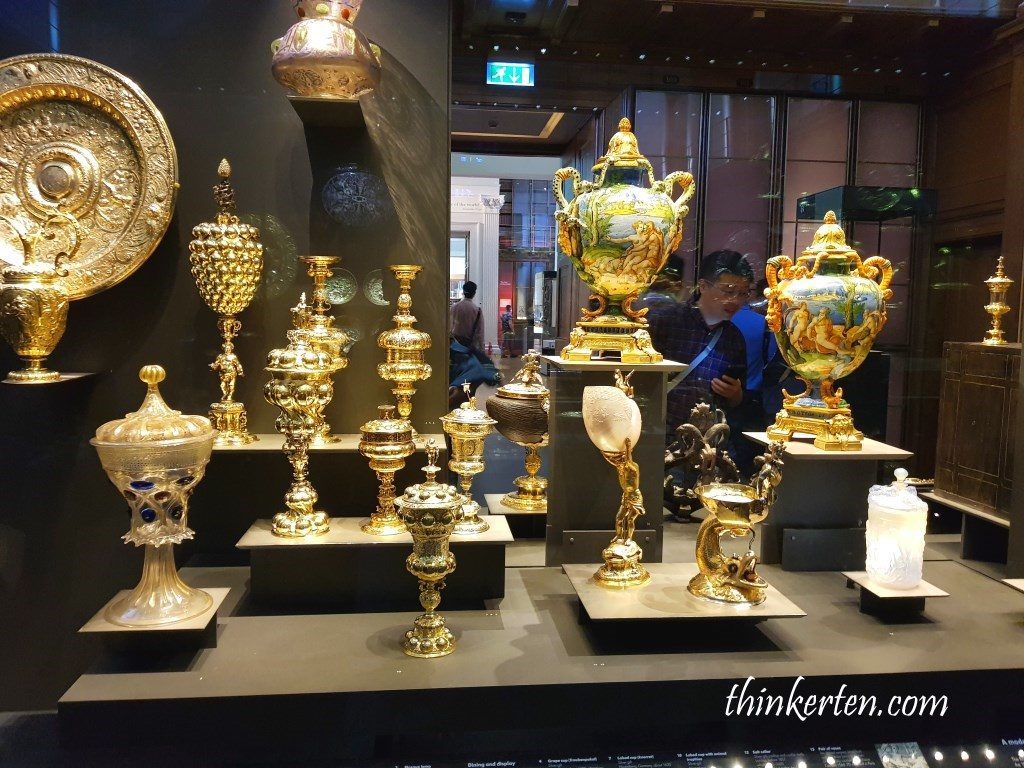 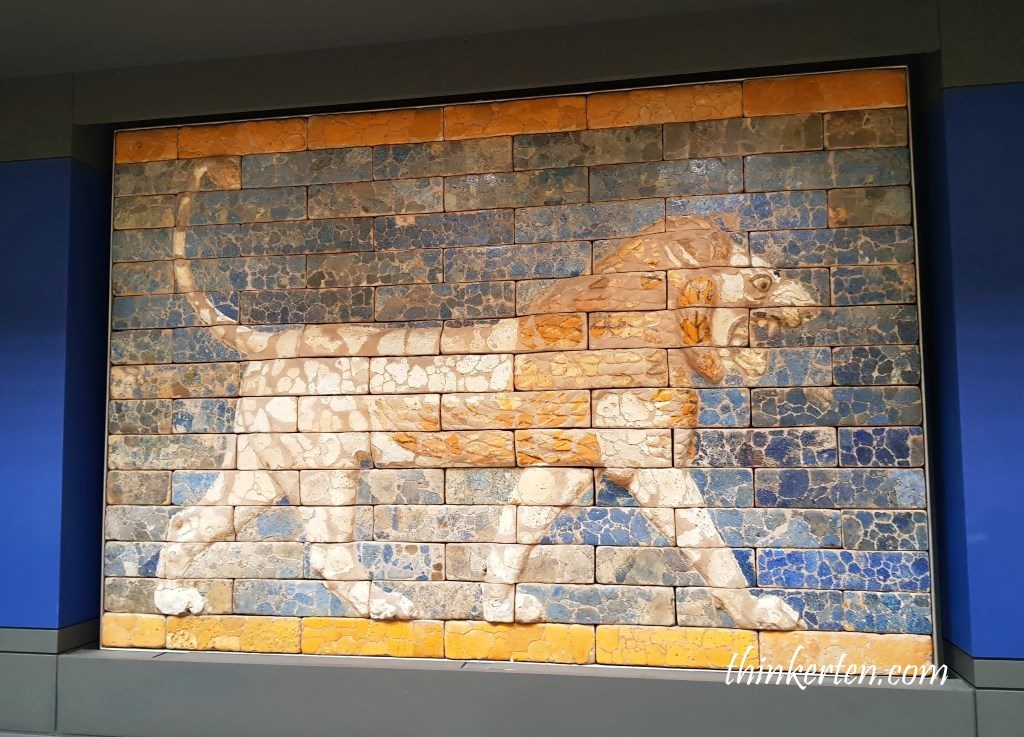 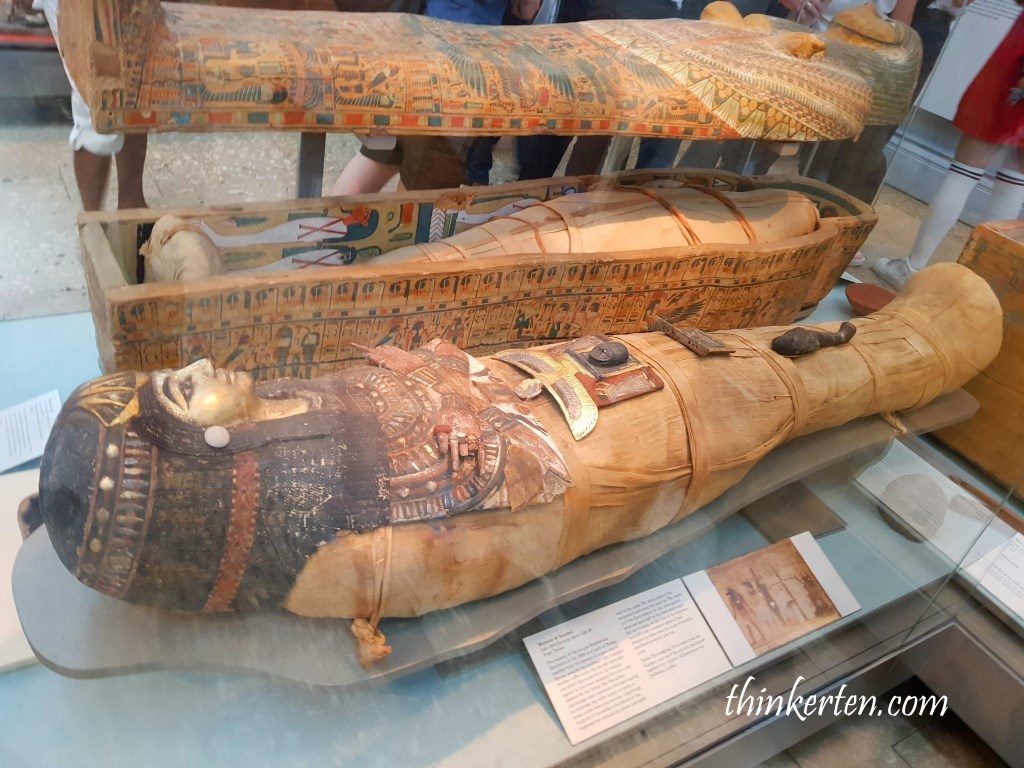 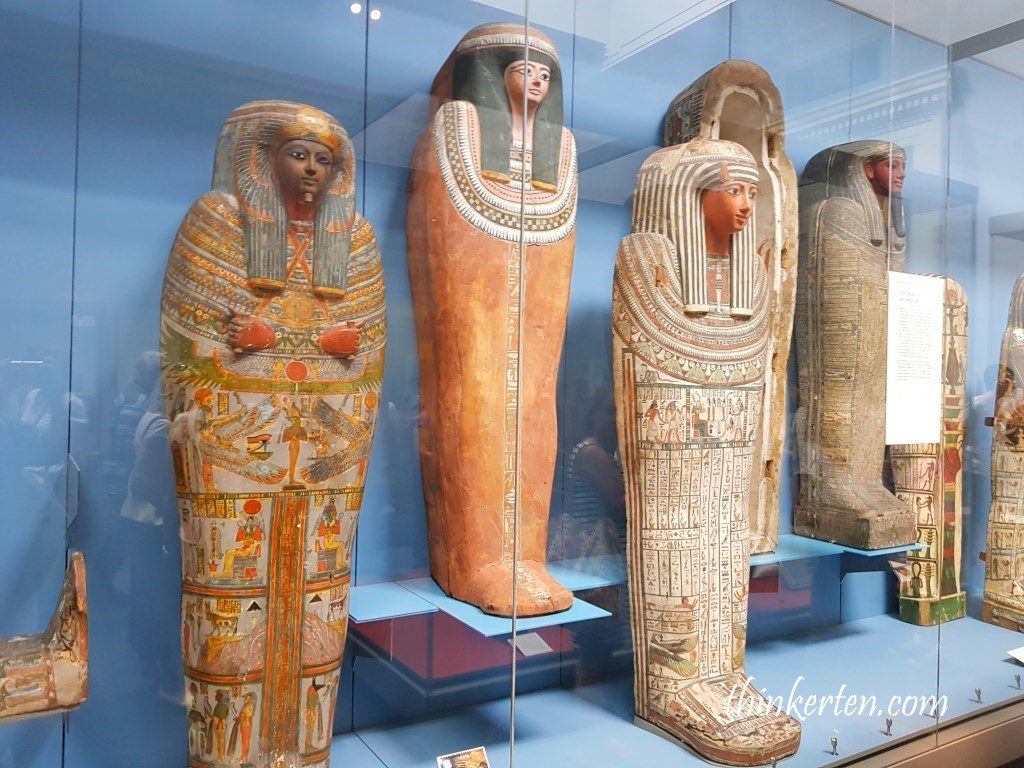 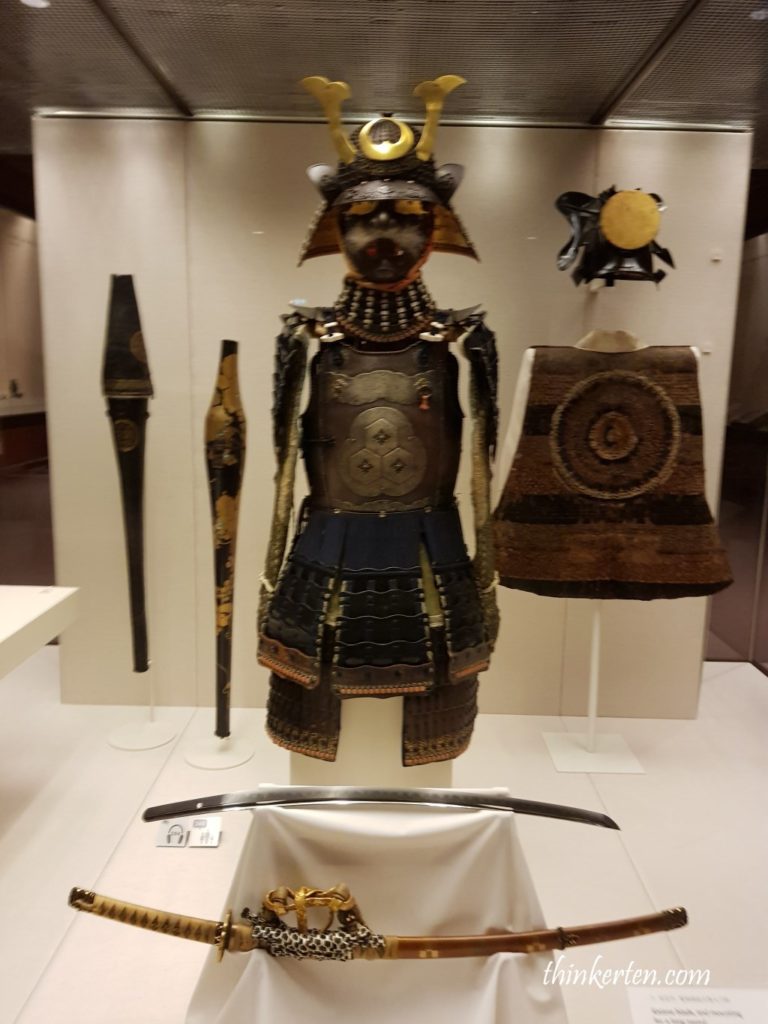 You will notice the handles of the vase are elephant trunks.  The blue and white porcelain was named after the most famous owner, Sir Percival David (1892-1964) who build up one of the world’s greatest Chinese ceramic collections. The Vase was made in Yuan Dynasty- Kublai Khan, leader of the Mongolian Borjigin clan. These vases are among the most important examples of blue-and-white porcelain in existence, and are probably the best-known porcelain vases in the world. 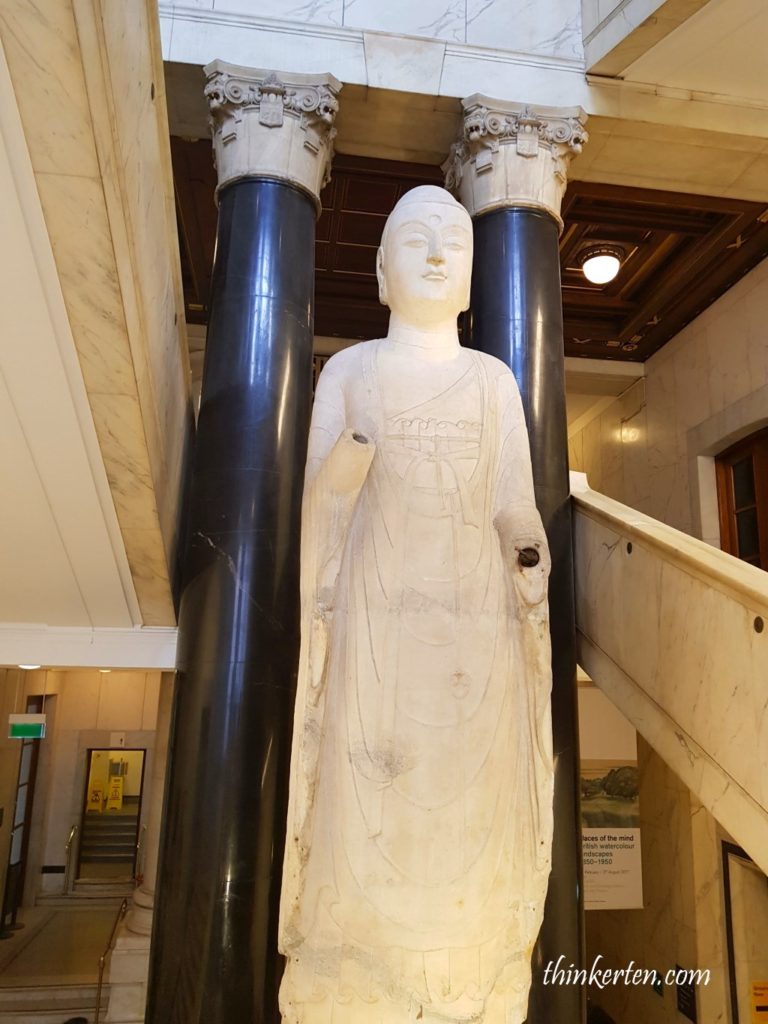 Can you believe you can even see the giant statue from Easter Island? The statue is about 2.5 meters tall. 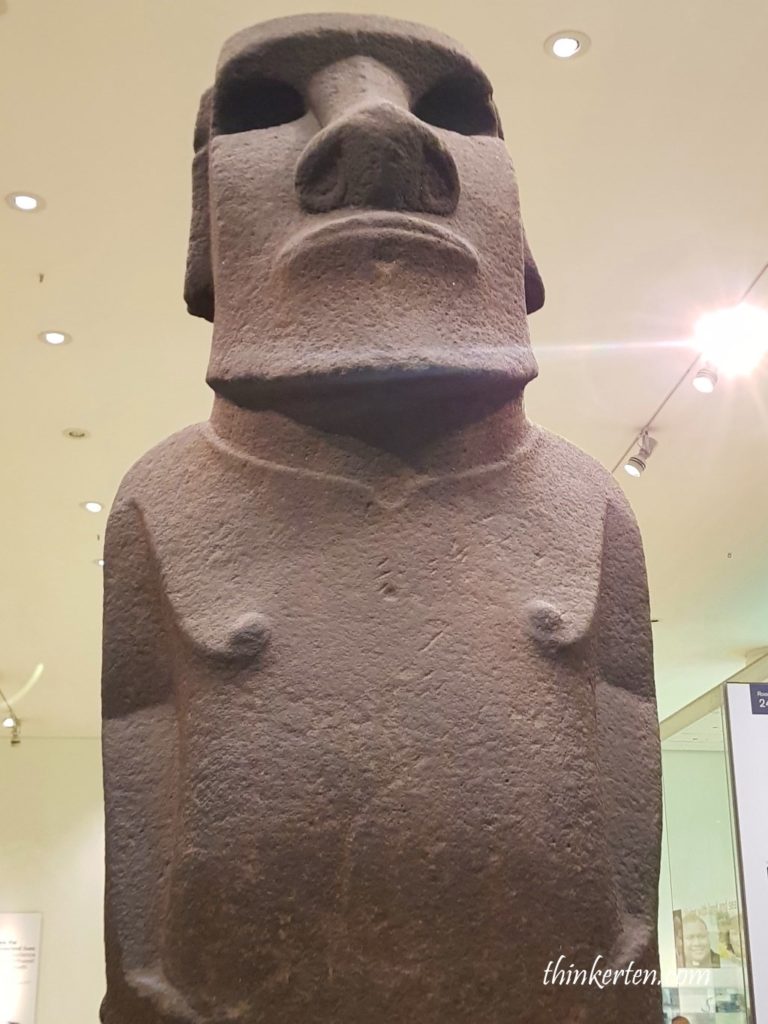 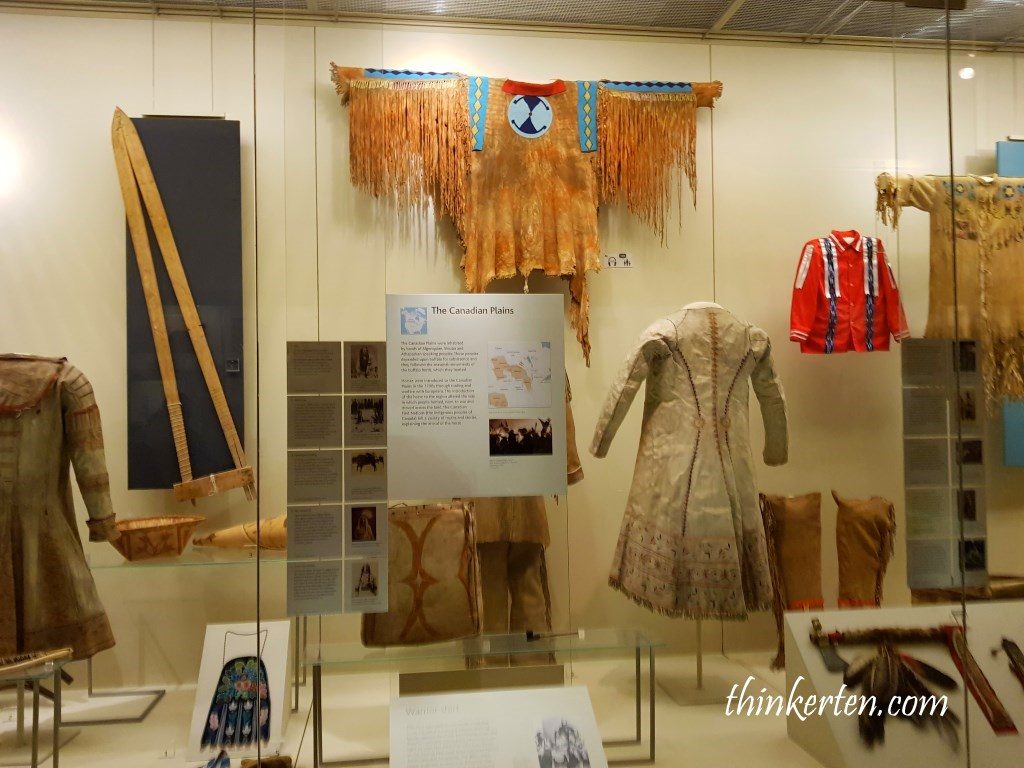 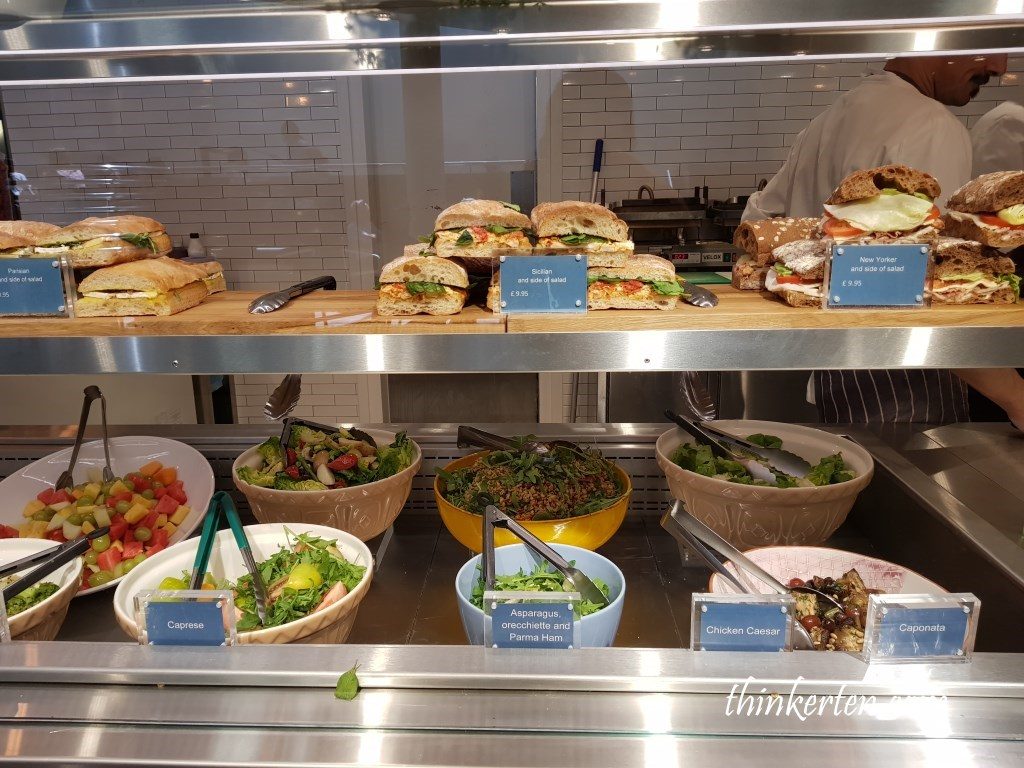 Before we started our museum tour, we filled out stomach at one of the cafe inside the British Museum.  We ordered a pizza cost about GBP 10.00+ and a Caesar salad also cost about GBP 10.00.  We also ordered some cake desserts.  I cannot remembered the exact price but the food was good.  It is really convenient to eat inside the museum in case you don’t have much time. 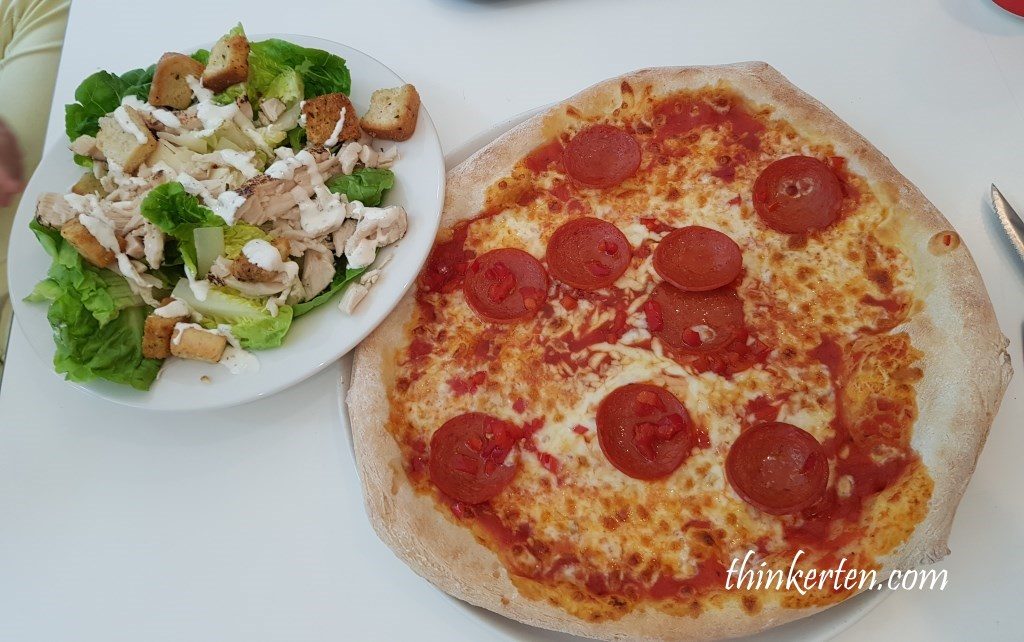 You have such a good list of one of the best artifacts at this museum. Sadly I haven’t seen them all. Last time we were at the musuem, my daughter didn’t move from the Egyptian corner. But surely, one of these days!

Dear Bhawa,
Thank you for your comment. British Museum is really full of treasure and the list goes on. I don’t one can finish looking at all the artifacts in a day. Those mummies in the Egyptian corner certainly look scary to the young one, even adult like me feel eerie when I was in the Egyptian corner. The British Museum really have so many pieces of mummies and I wonder how did they ship these mummies back? Aren’t they worried of the virus or germs!!