Fort Canning is the 18 hectare hill park located in the central of Singapore city.  A popular spots for picnic and cultural performances.

There are few things you could do in Fort Canning Park, explore the :
1. History Trail
2. Spice Garden Trail
3. Heritage Trees of the Fort Trail 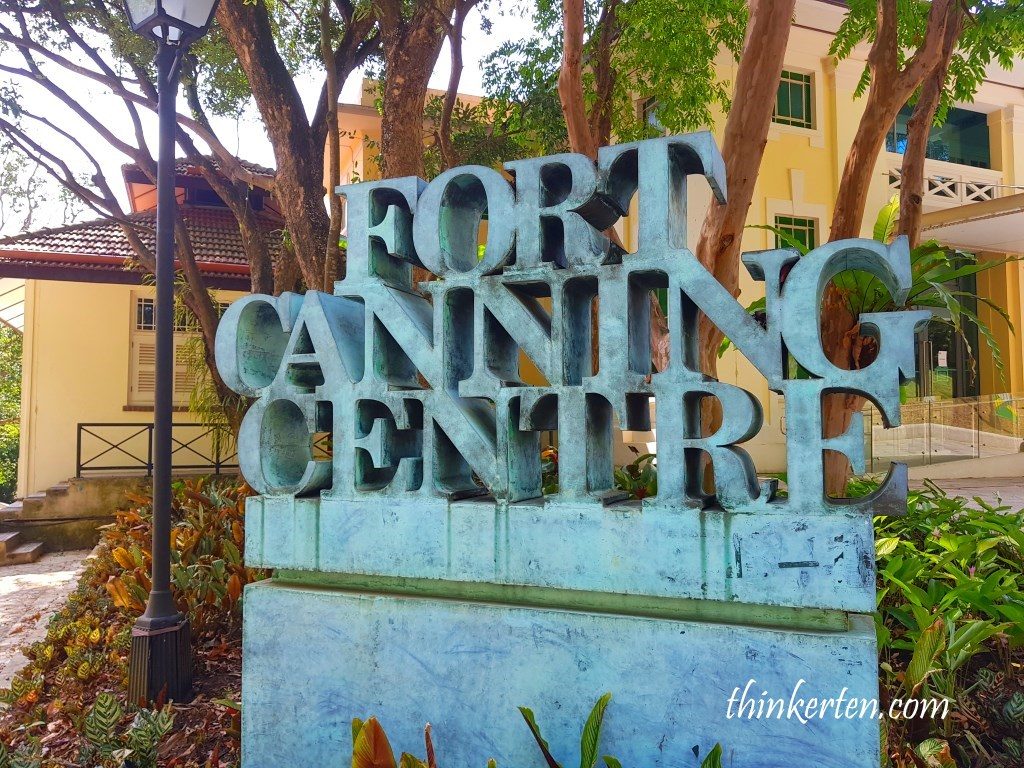 The original name was called Bukit Larangan. In Malay, Larangan mean “Forbidden” so Bukit Larangan mean Forbidden Hill. It was due to the belief of that the place is the rest place of ancient kings in Singapore and believed to be haunted in olden days. 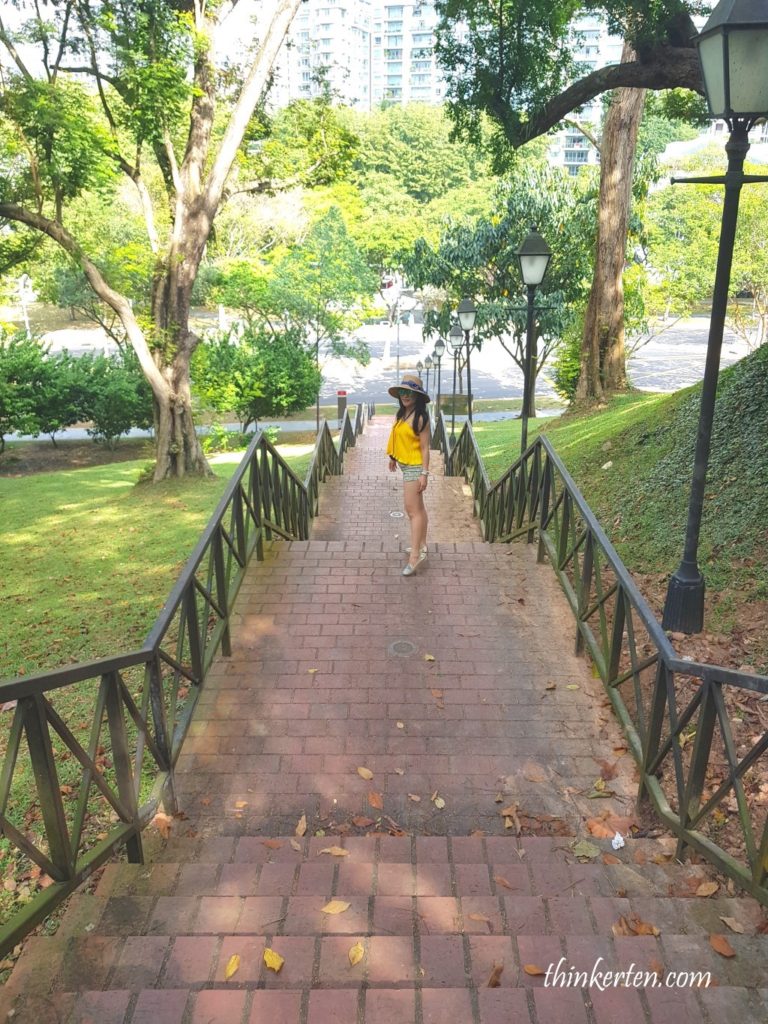 Later Sir Stamford Raffles came to Singapore and built his residence, a wooden bunglow with attap roof so the name changed to Government Hill.  A better name not as scary. 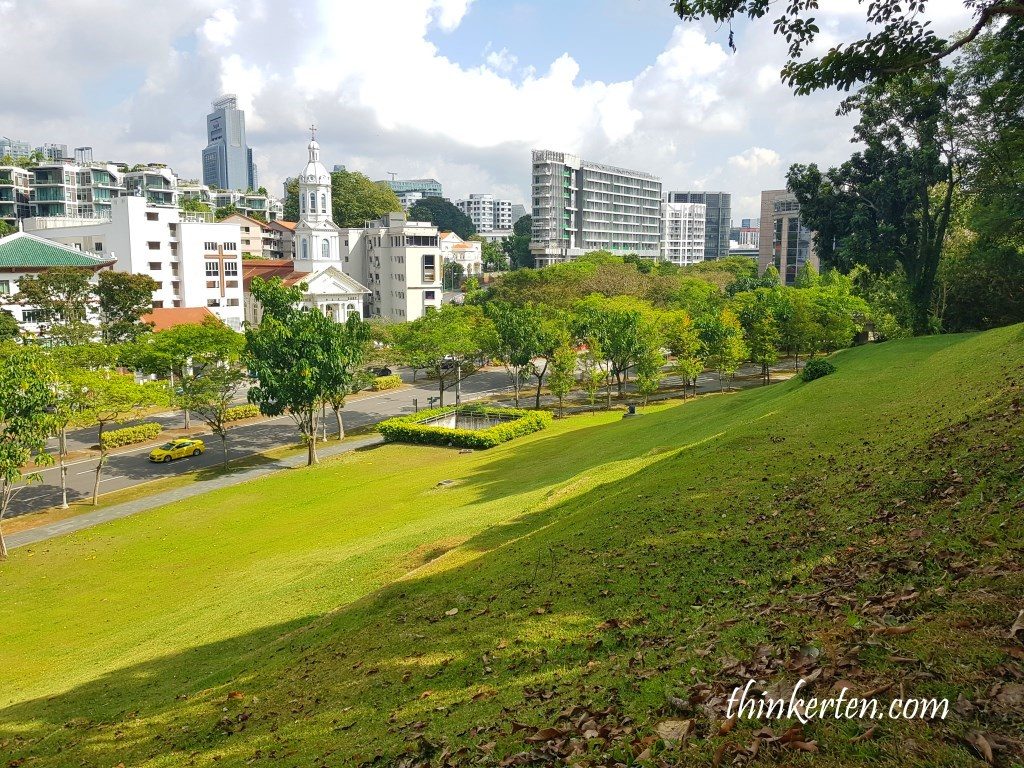 In 1861 the name get changed again to Fort Canning after a fort was built on the hilltop. 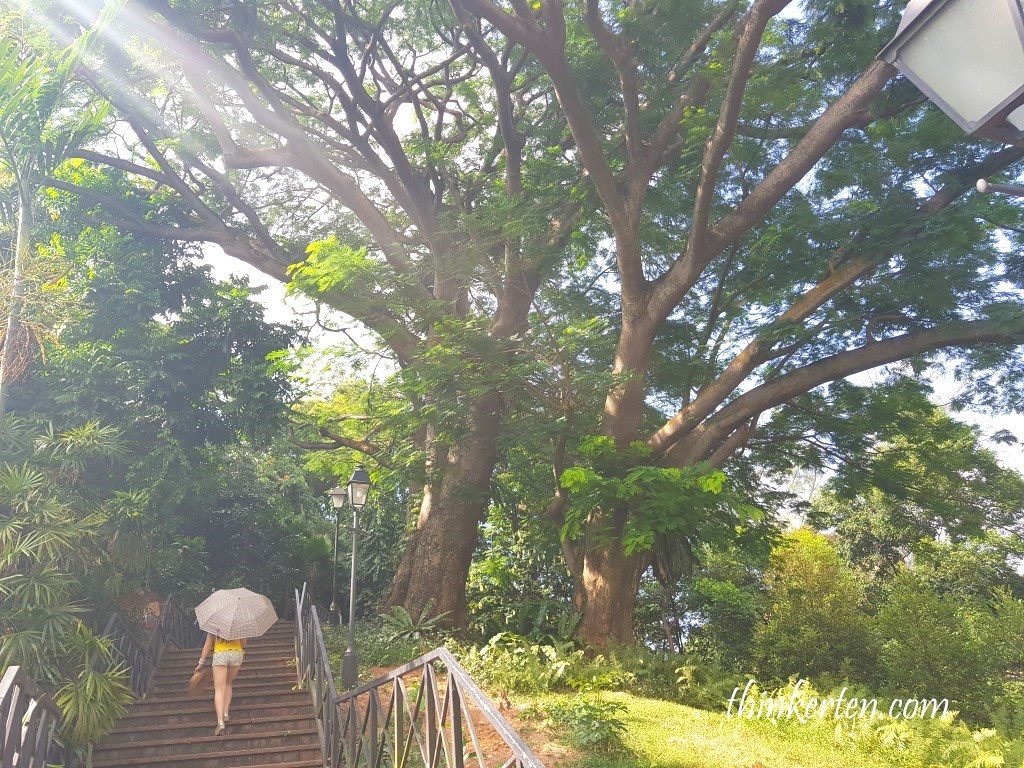 While walking up the steps towards the hill top, you will encounter few huge giant heritage tree.  Ear Pod Tree is one of the heritage tree in Fort Canning. The seeds of the tree look like an ear form so that that’s how it gets it common name.  Jane waiting for Tarzan to come to the rescue!  🙂 🙂 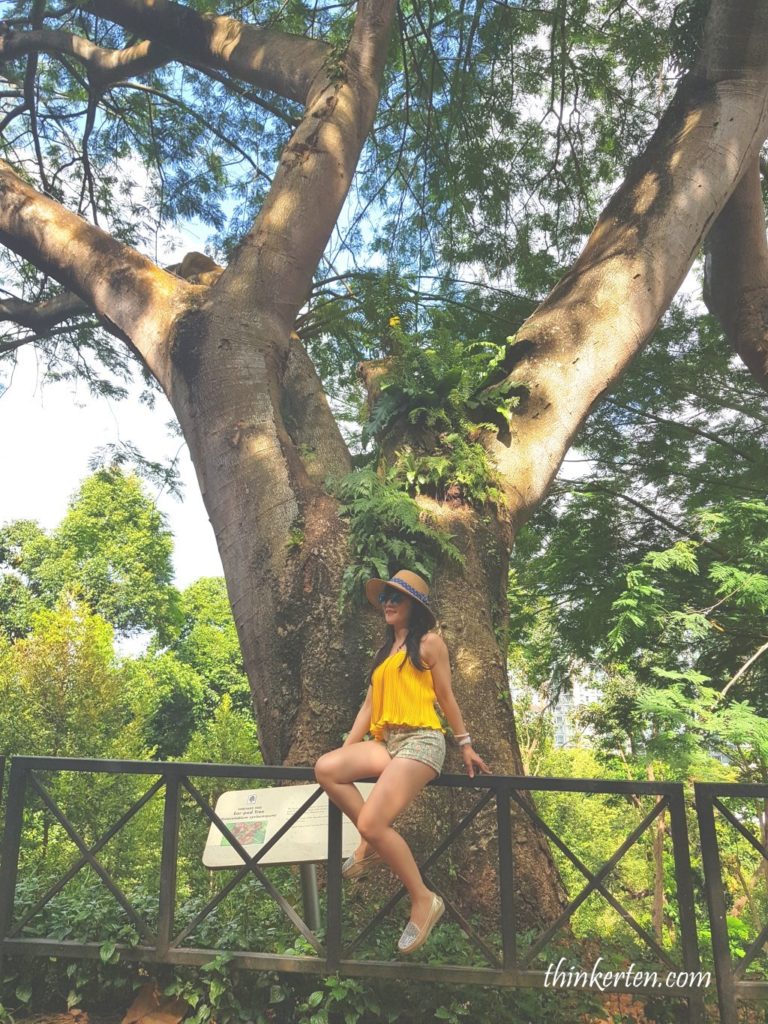 When you reached the hill top, you will notice some people practice taichi under shade of big trees. 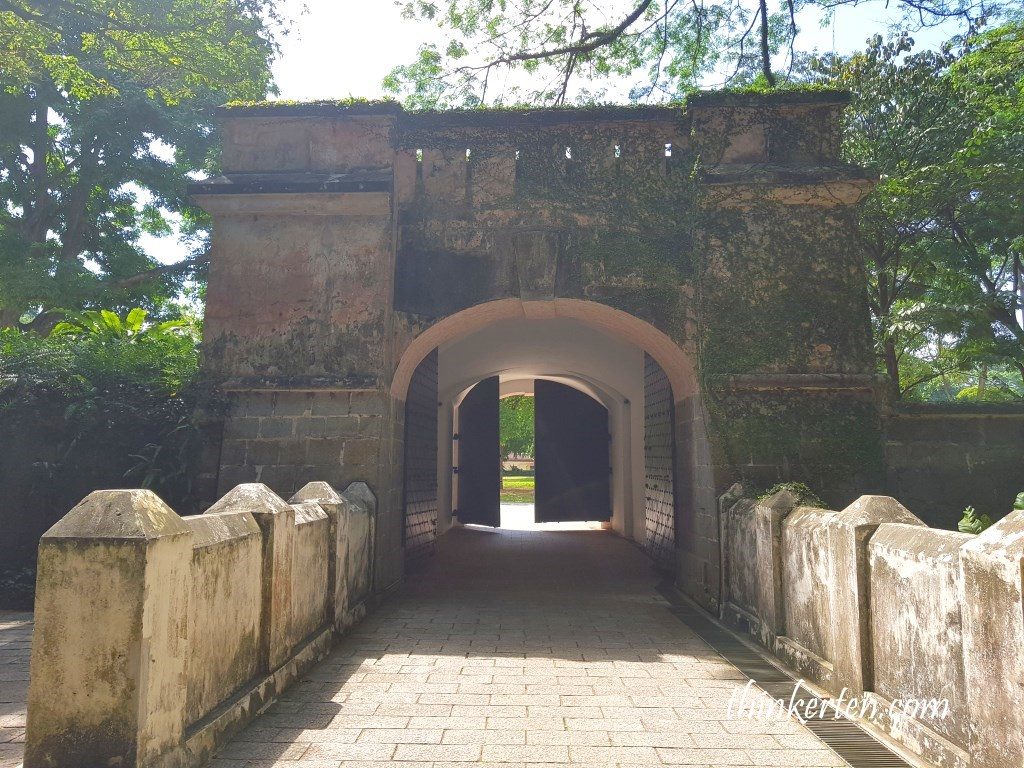 The gate was built between 1859 and 1861.  After the gate was built, the name changed to Fort Canning Hill as the hill was converted into a fort from the previous Government Hill. 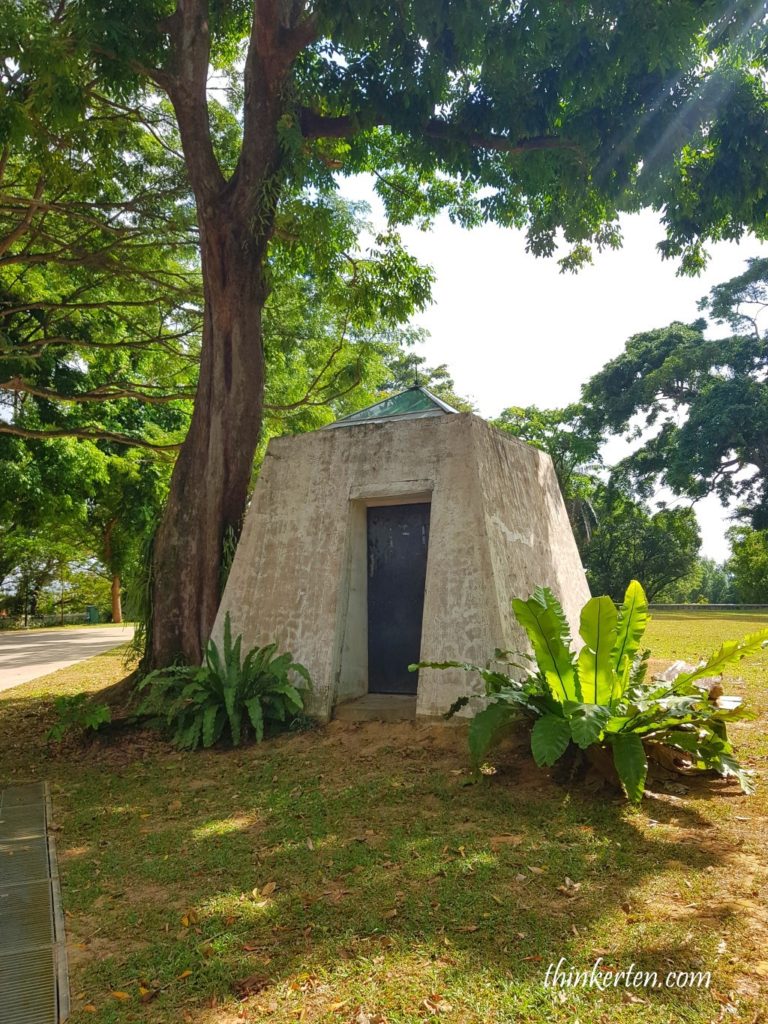 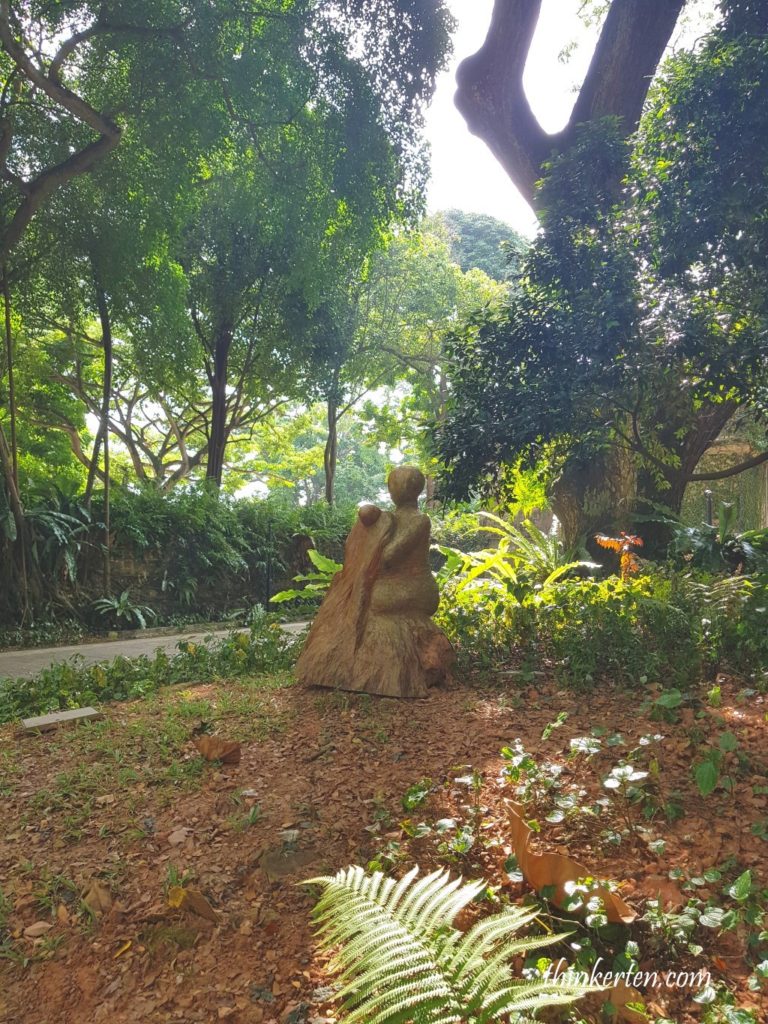 There are many sculptures can be found in Fort Canning Park.  These sculptures are completed by various artists in Singapore.

Without the explanation I doubt I can understand anything!! 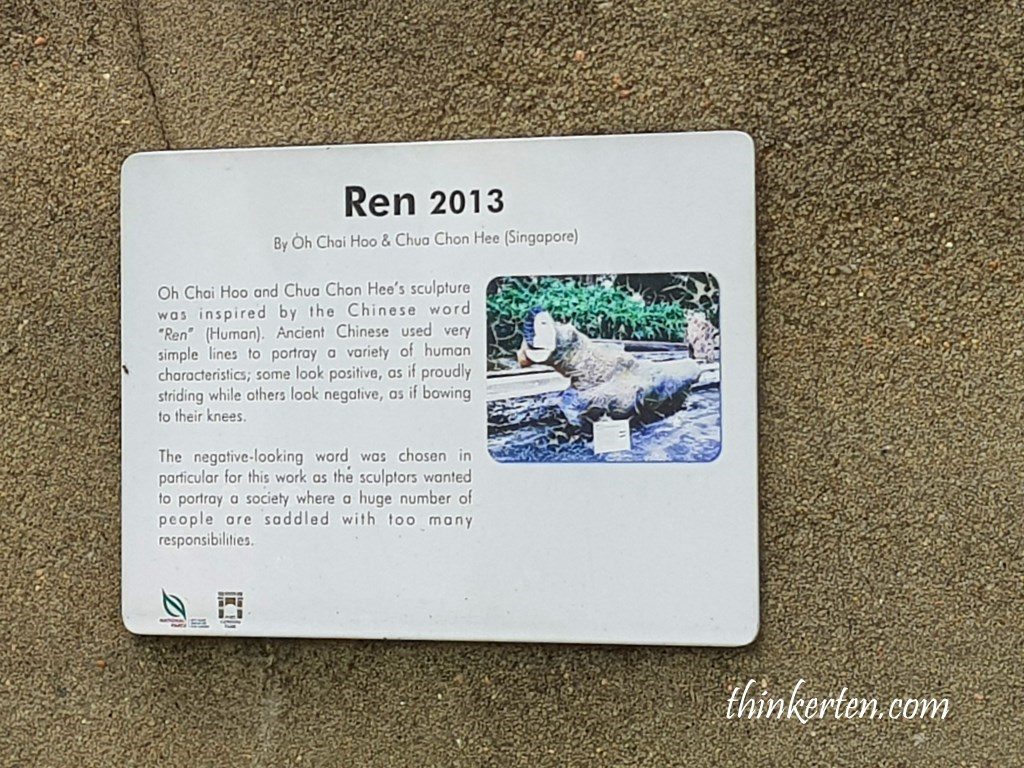 Some of the woods here were found in Fort Canning and used by the artist. Like I said I totally have no clue what these woods resemble but the Wind Chamber at the far right (below picture) caught my attention.

The Wind Chamber is a rectangle box with many holes which serves as a winder catcher, it allows visitor to enjoy the melodies created by the wind

Another sculpture, not sure what is this?  Look like a hand to me.

Surrounded by huge trees and lush foliage this is a great outdoor wedding venue! 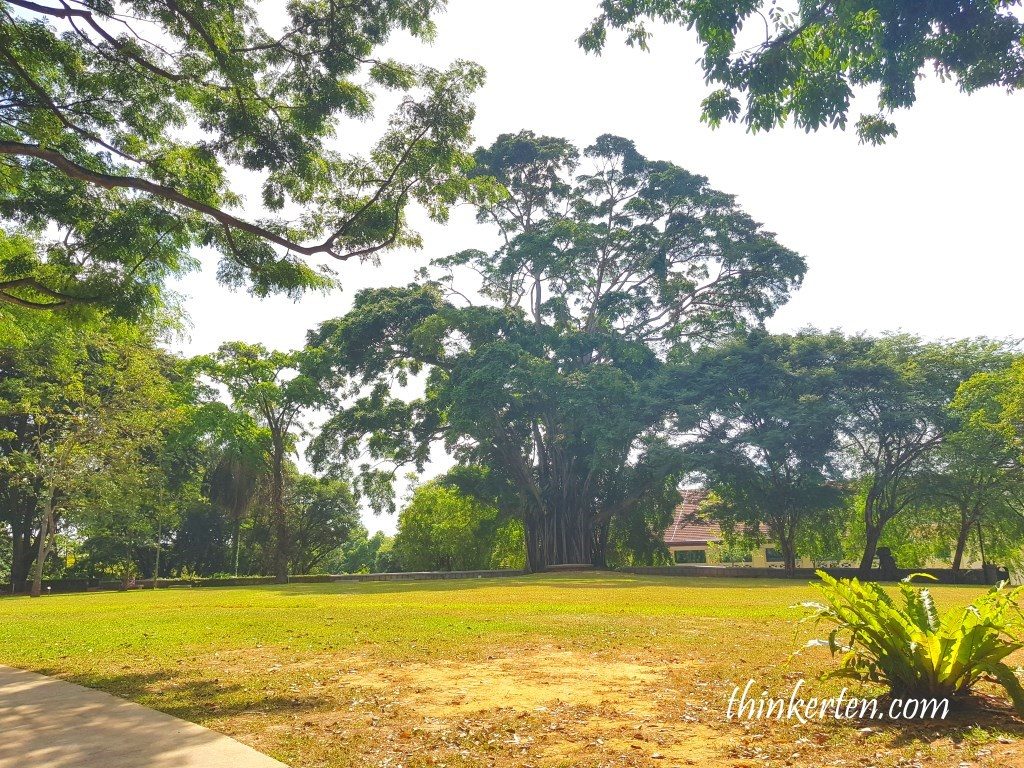 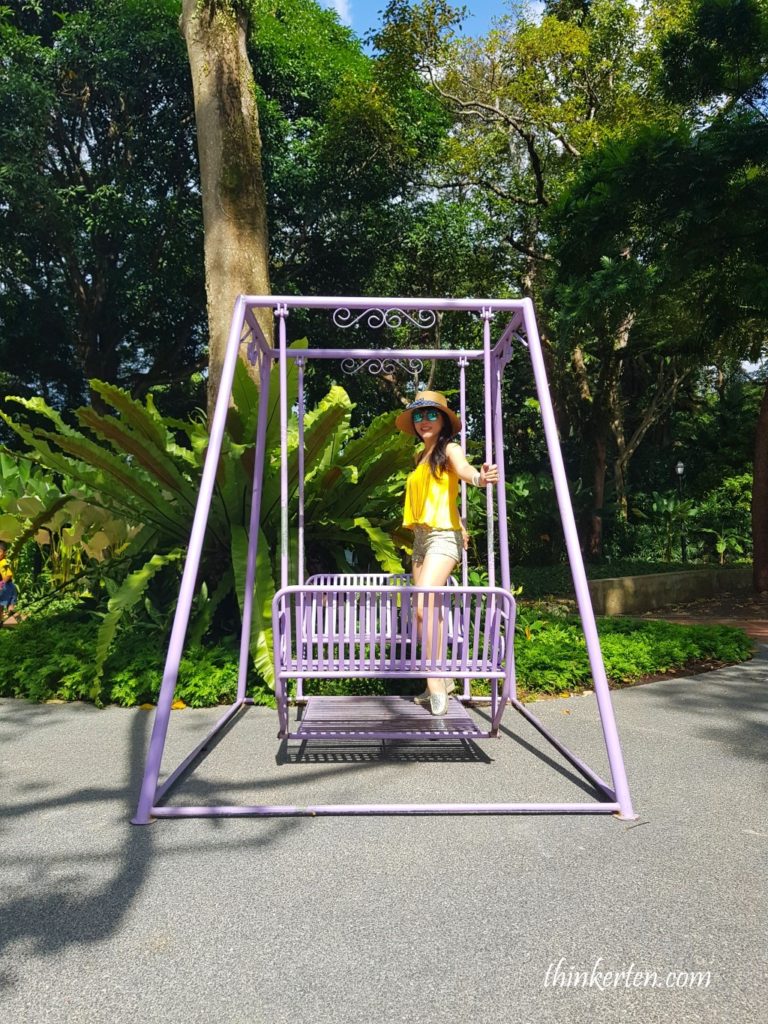 The single-storey white building is an air-conditioned indoor venue for event and functions or even wedding. 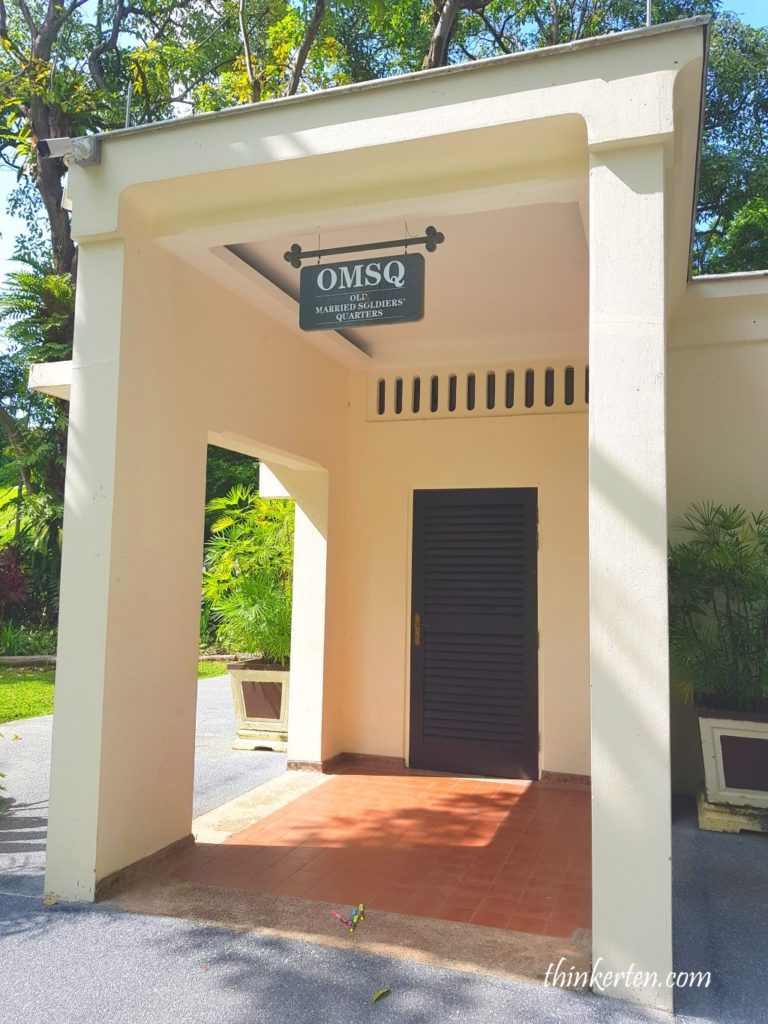 Fort Canning is the hot spot for photography enthusiast. 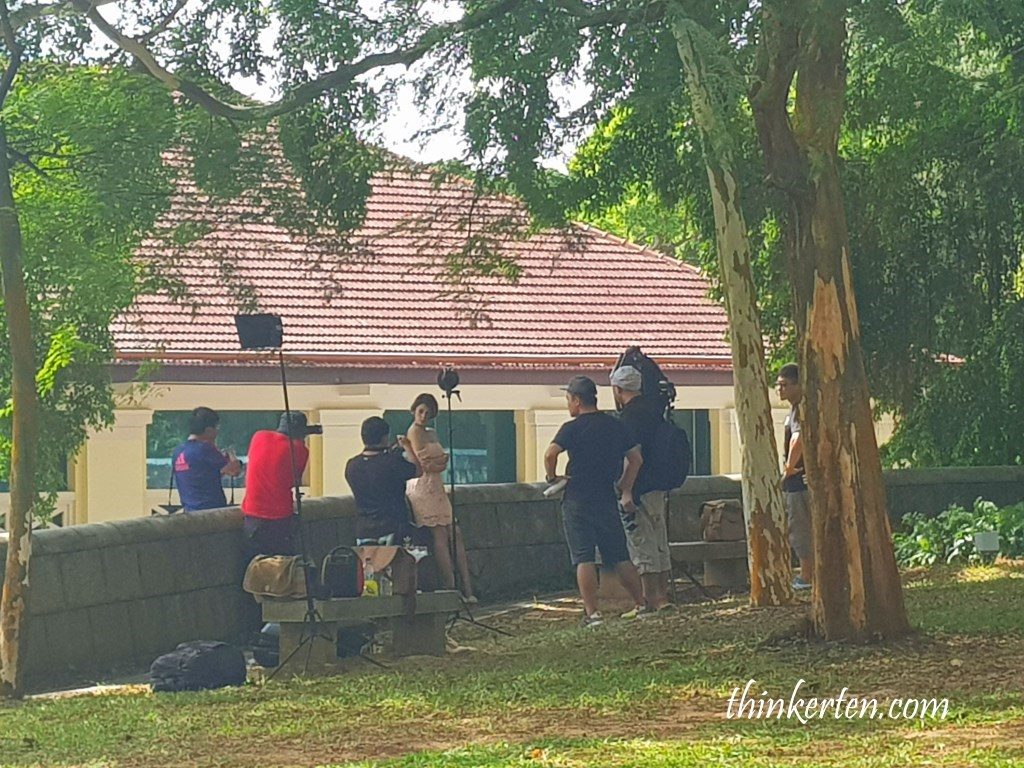 I spotted few group of young families were having their family pictures shooting session in Fort Canning with the professional photographer. 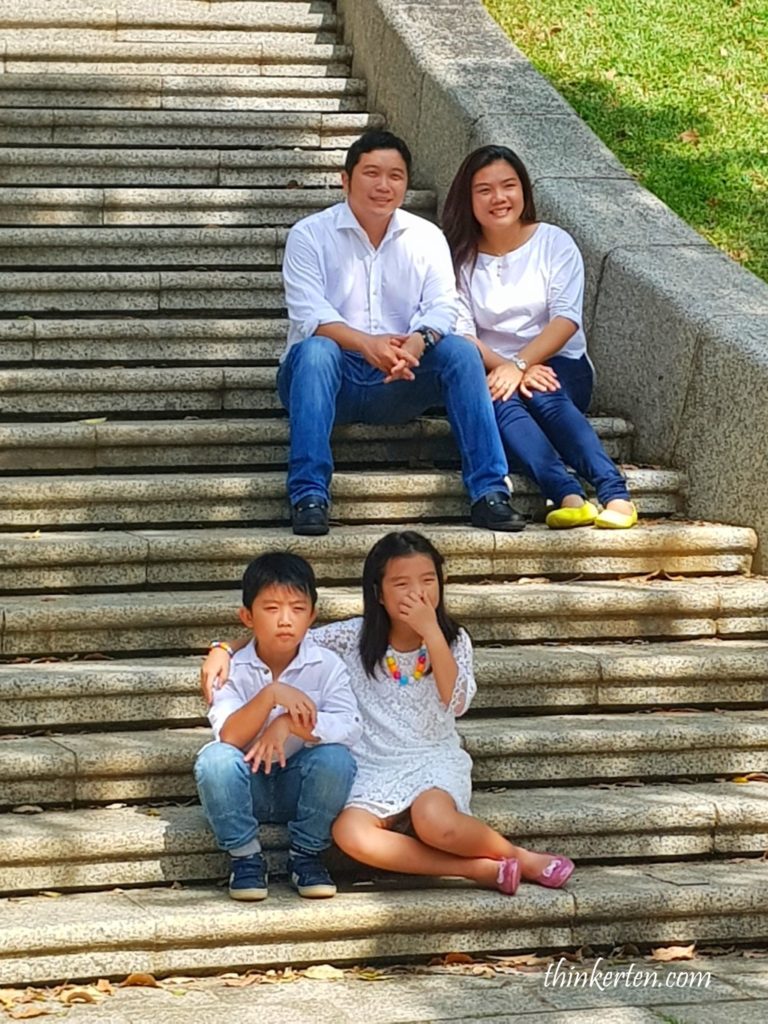 There used to be a pair of cannons at Fort Canning Park but today only left one. Made in the early 19th century, the cannons were meant to shoot 9-pound cannonballs. 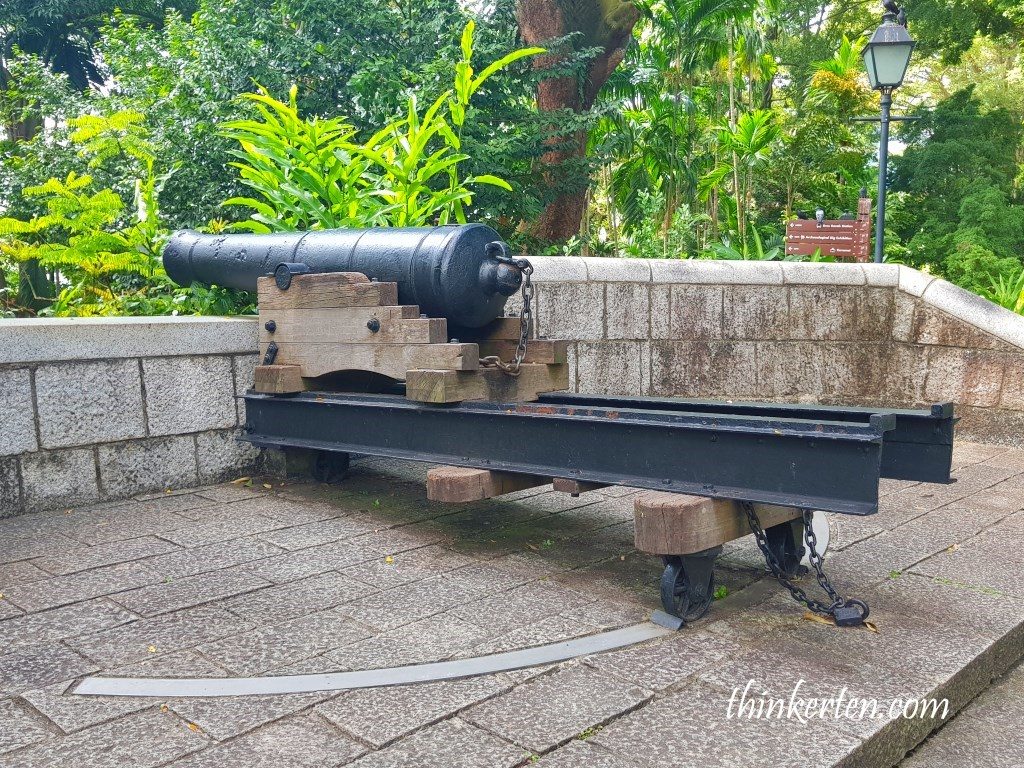 Keramats are often tombs, and it has been claimed that this site is the burial place for Sri Sultan Iskandar Shah, the last of the five kings who ruled Singapore during the golden age of the Malay Kingdom in the 14th century. It was speculated in local Malay folklore that even the first Malay king, Sang Nila Utama were also buried on Fort Canning Hill. This is an auspicious place where some believe they can ask for favours from the supernatural.  I was actually quite scare and do not dare to get close to the keramat, only looking from afar. 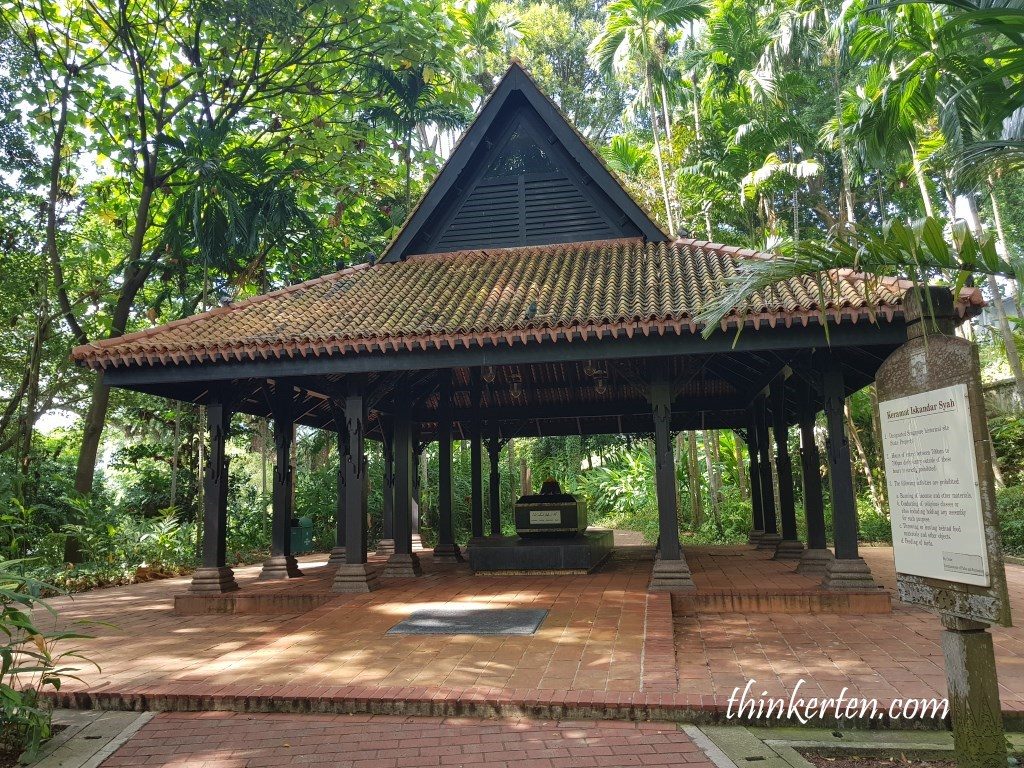 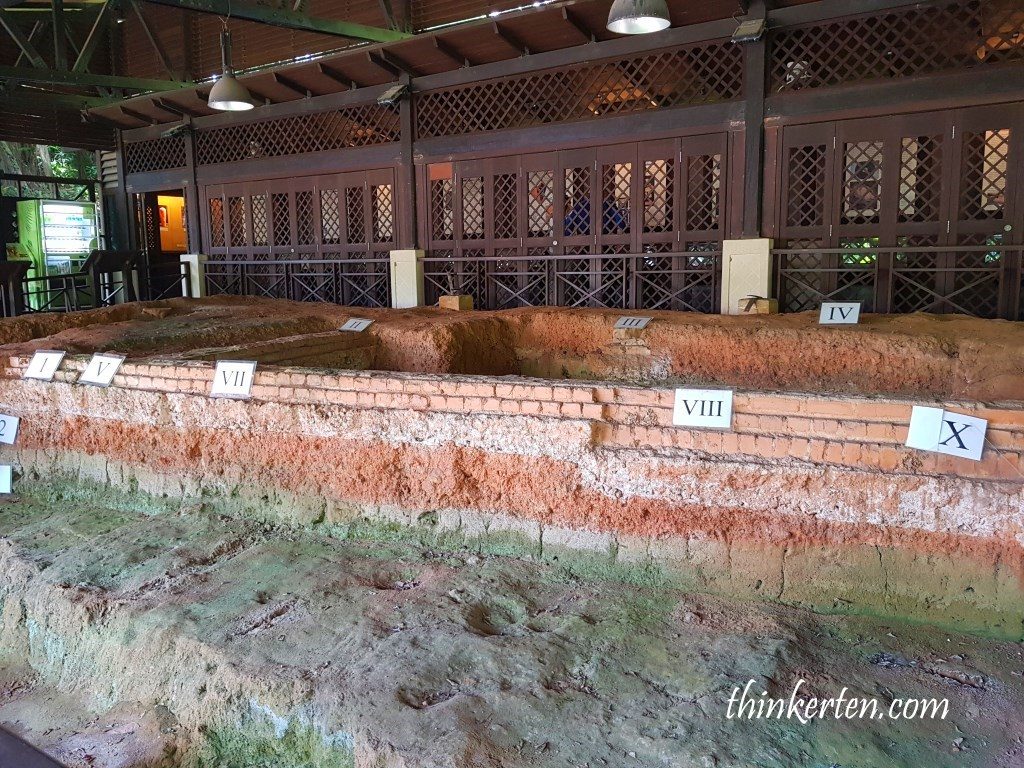 There is a little museum showing artifacts in the 14th century, few piece and pieces of broken earth-ware, stone ware & glass shards.  Some were Chinese imported stone ware. 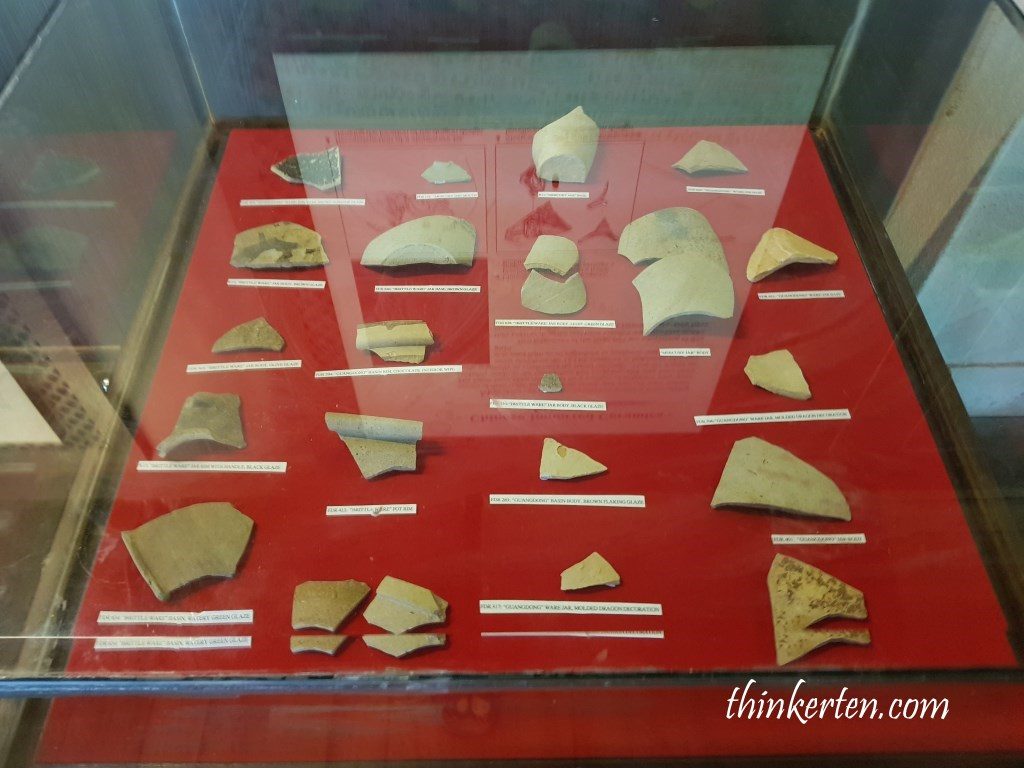 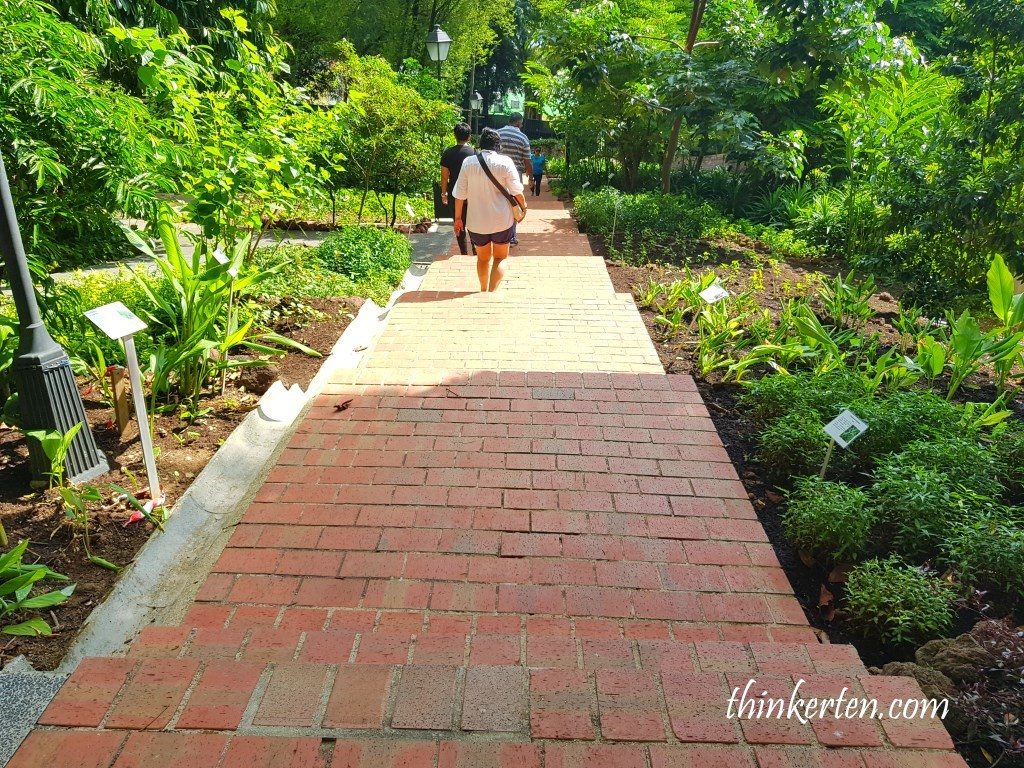 It has a very huge range of spice from Thai basil, cinnamon, black pepper, curry trees, nutmeg and many more planted in this garden all being labelled.  If you love spice and plants, don’t miss out this portion of Fort Canning. 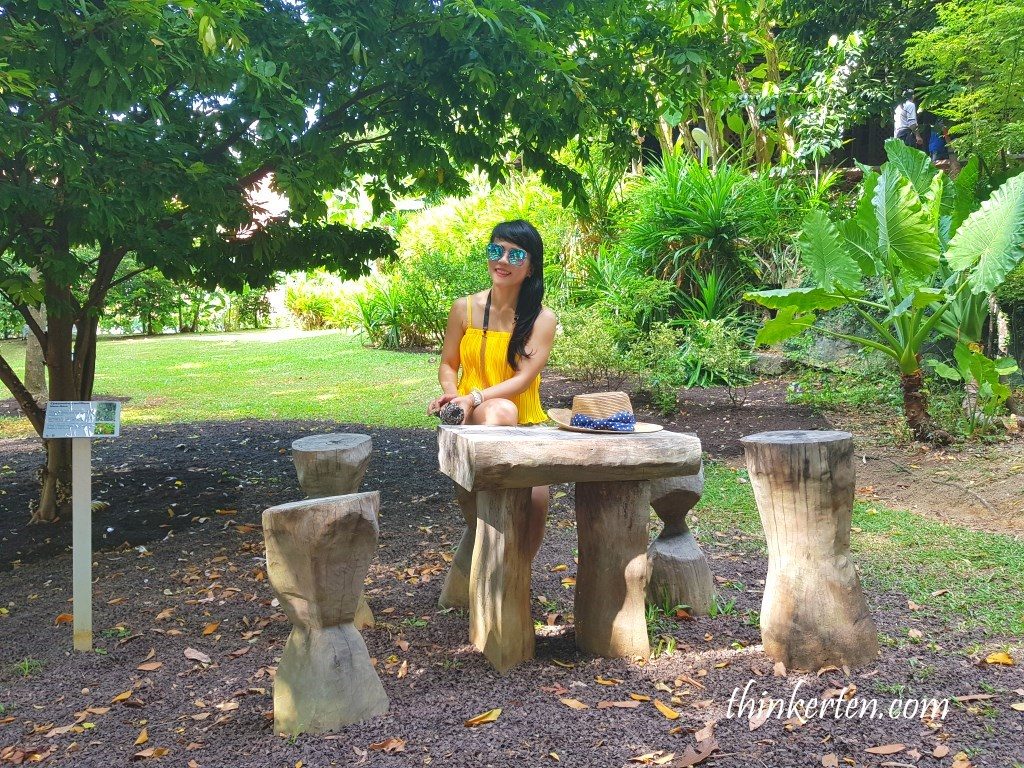 Spotted a chicken in the spice garden. 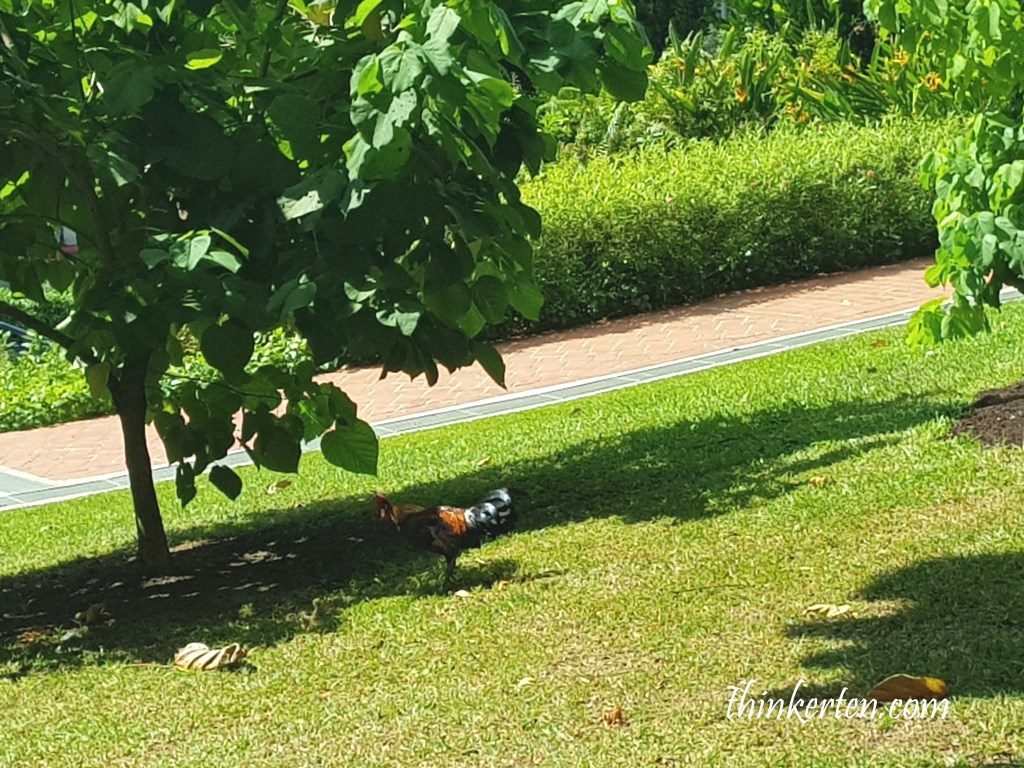 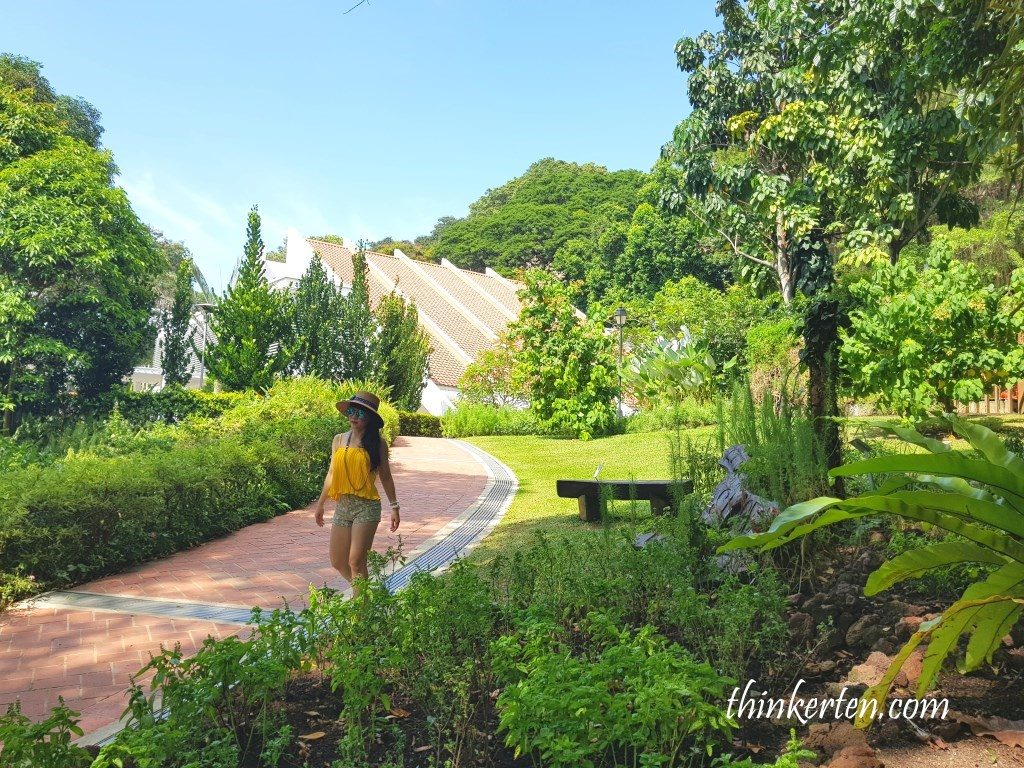 Another iconic landmark not to be missed, the Gothic Gate located near the spice garden.  The letters above both gates, “IHS” are iota, eta and sigma, the first three letters of the Greek word for Jesus.  This is a gateway into Fort Canning Green – Christian cemetery. 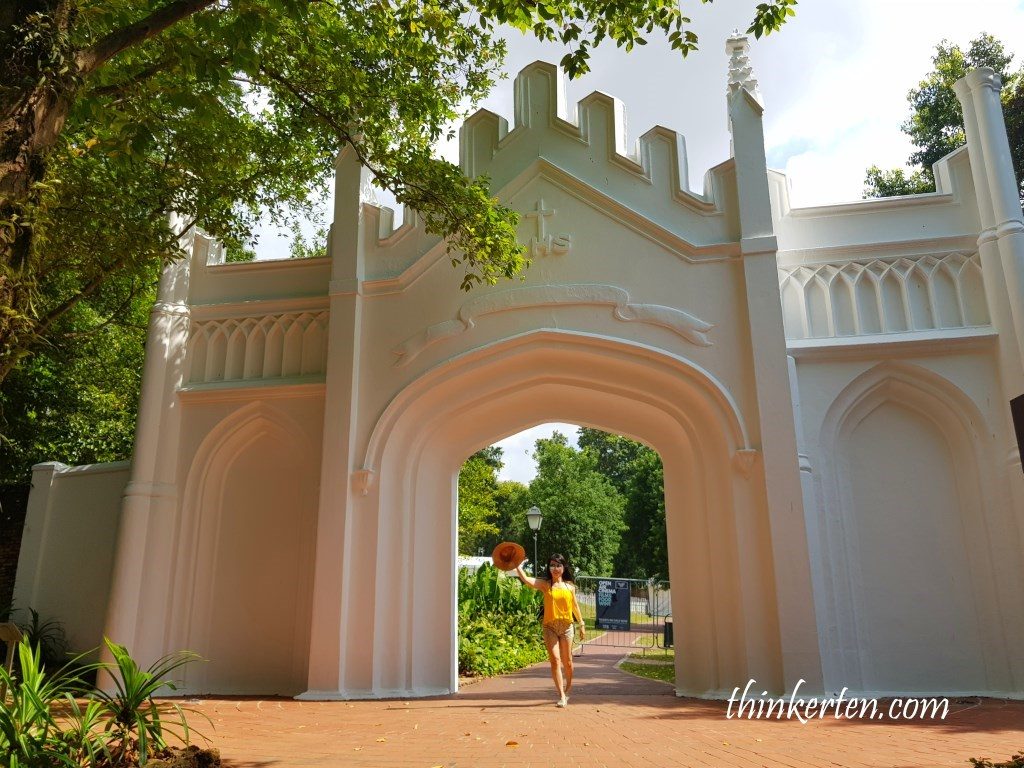 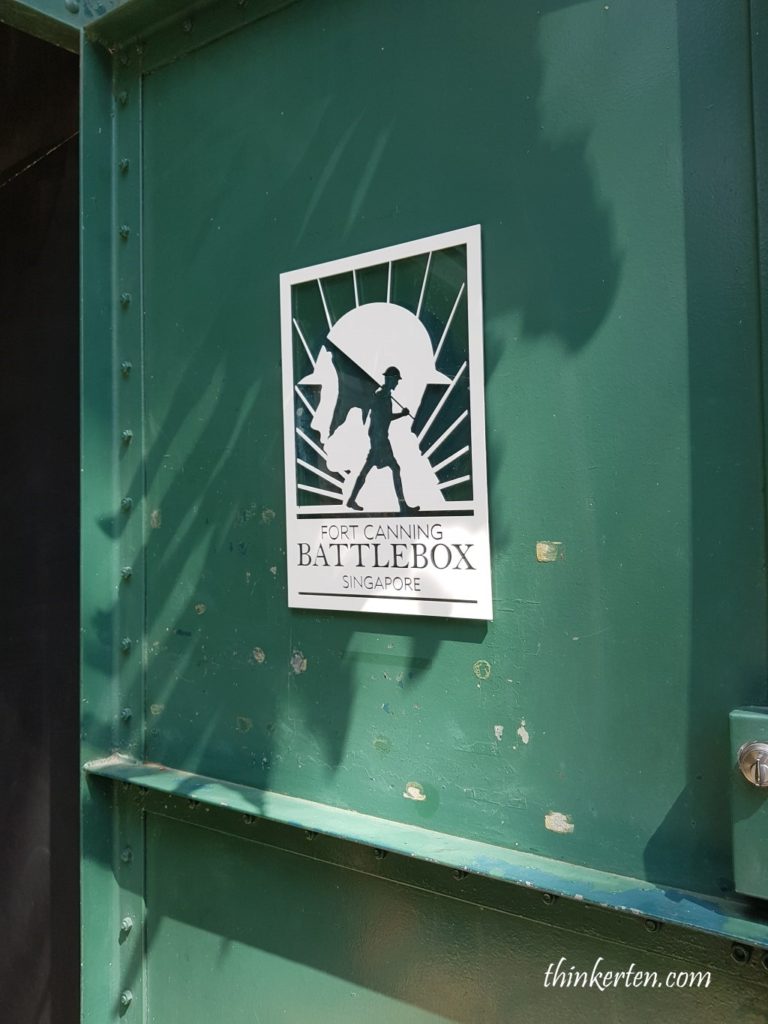 Battle box is the underground command center built under Fort Canning.  A guided tour will bring you through the underground museum.  An insight into the battle!  Admission fees for Battle Box is needed!  Click the link to check out the timetable for the guided tour and prices. 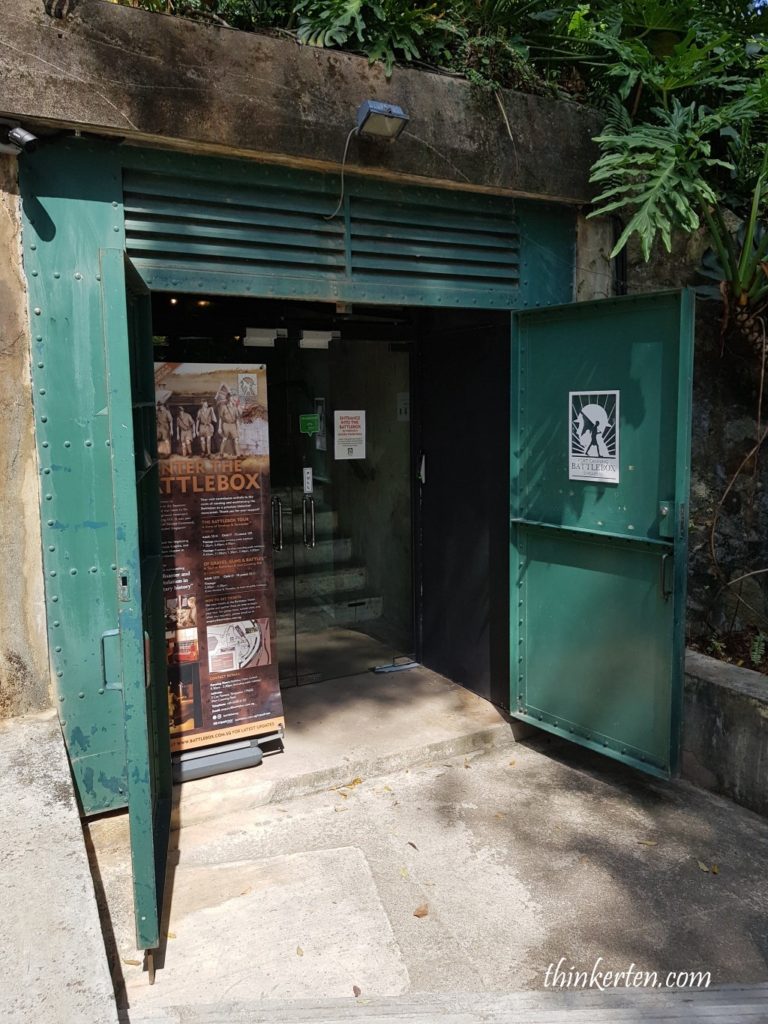 The building was originally constructed in 1926 as a British army barracks but now converted into some cafes and restaurants and some private art museum.

There are not many eatery in the Art Center but there few nice cafe and up market restaurants, one of them is the FORT by Maison Ikkoku. 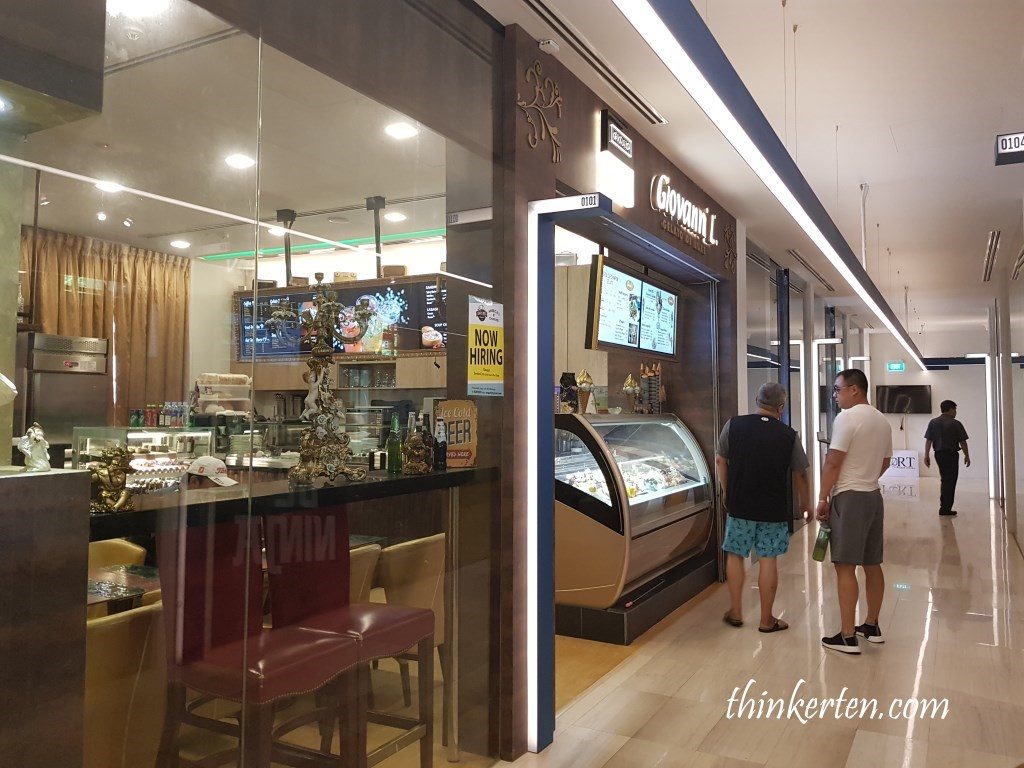 After all the exploring  of the historical site and spice garden and the big heritage tree trail, it is time to reward myself with some gelato ice-cream and enjoying the air-cond! 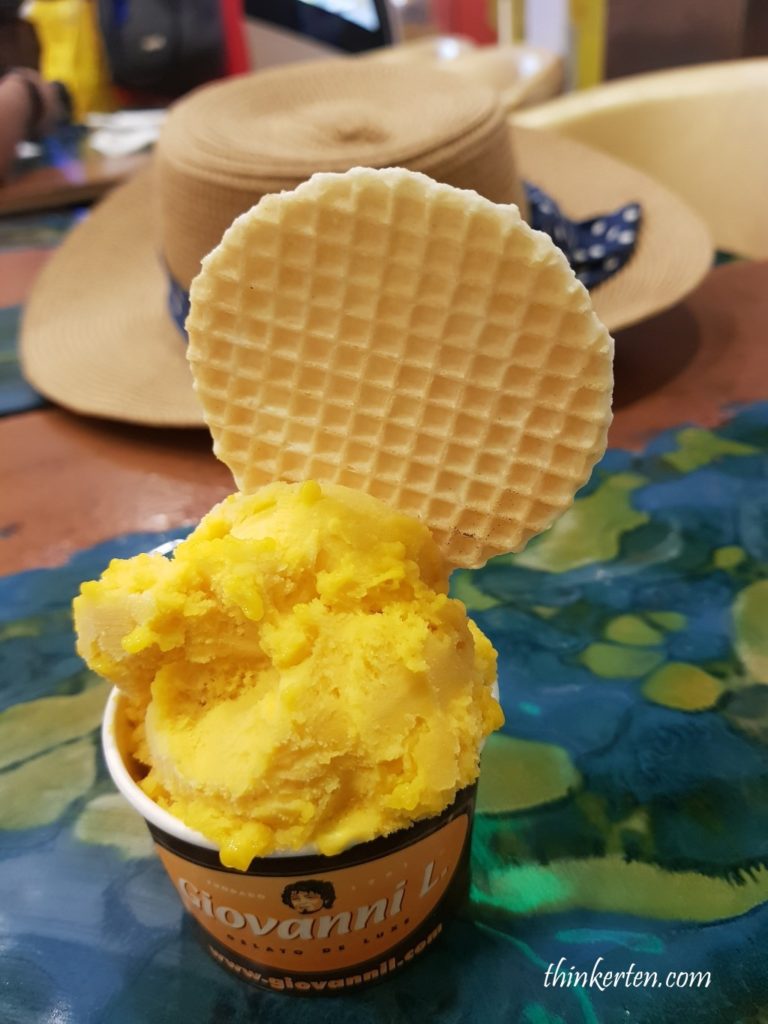 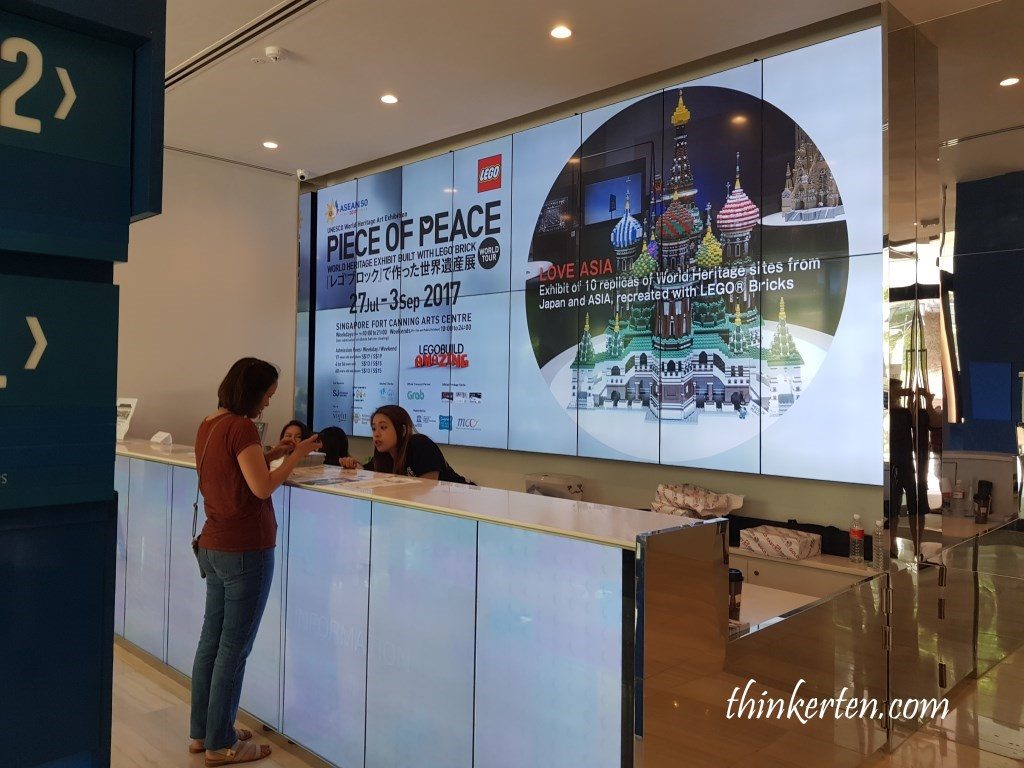 How to get to Fort Canning Hill? 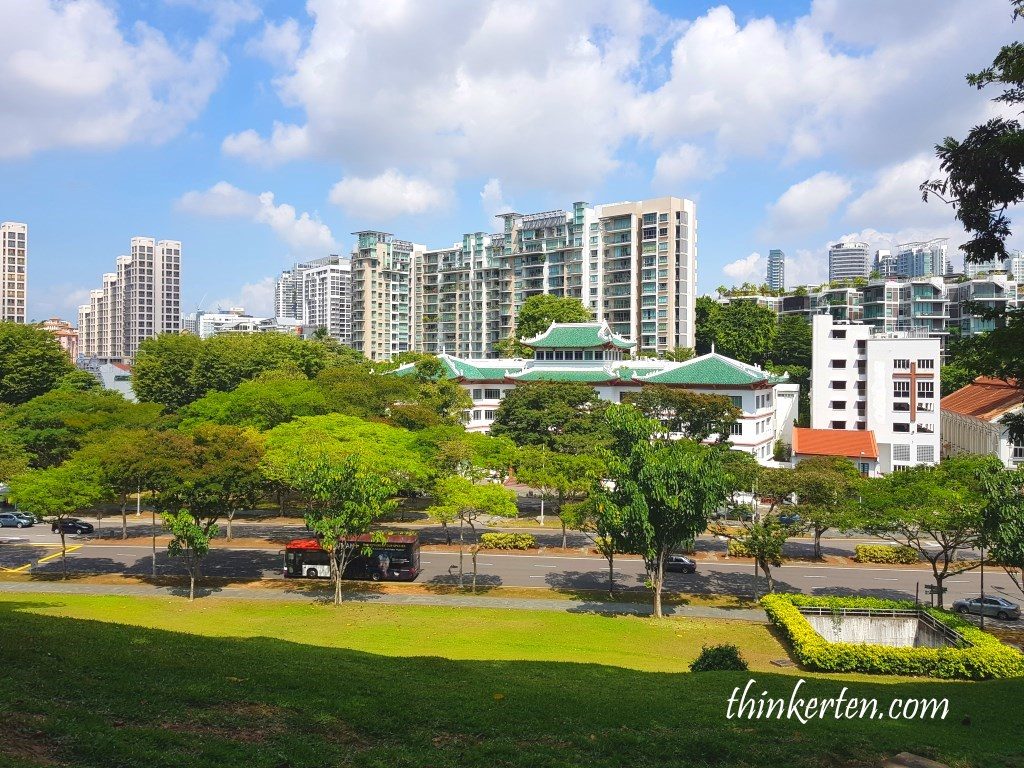