The weather in the morning was very chilling, we had to walk pass a suspension bridge to the restaurant for our breakfast.  I find the suspension bridge was pretty cool and I have to walk slowly to prevent it from shaking too much.  Having breakfast beside the riverbank jungle was a wonderful way to start our day. 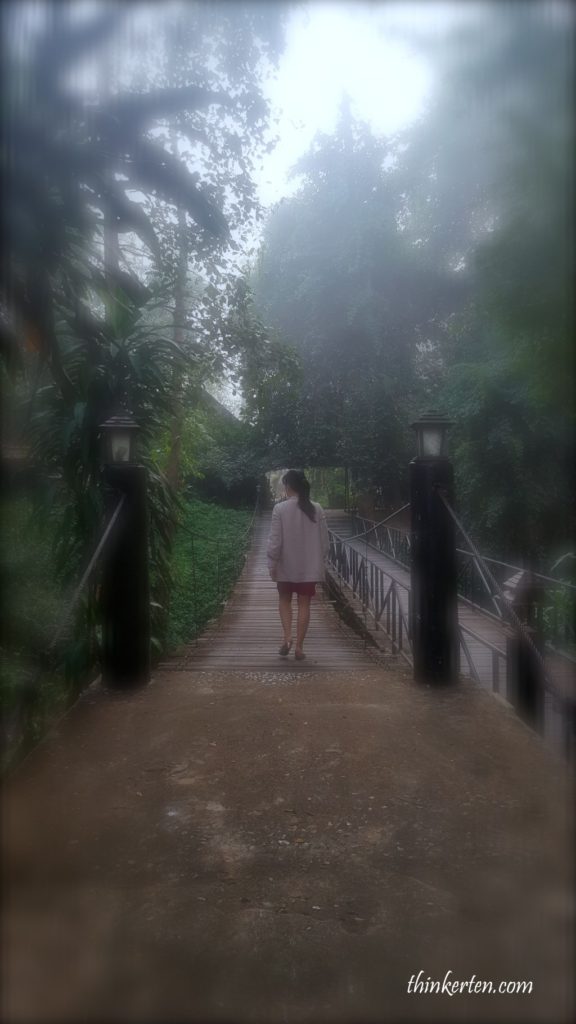 We checked out the Lampang River Lodge Hotel as usual at around 9 am and headed to Chiang Rai.  The distance from Lampang to Chiang Rai is about 227km, 3 hours in total. 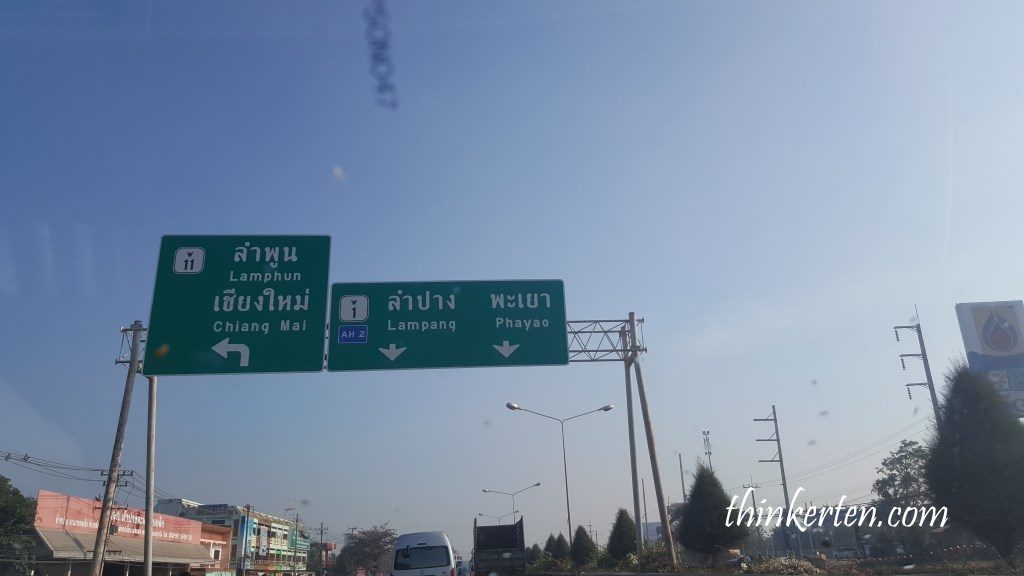 We stopped at a small town called Phayao to fill in gas and as usual we had our coffee at the Amazon Cafe.  After the coffee break, I took a look at the nearby stall which was selling some local delights.  I tried some of the bbq pork in the stick but later on I felt uneasy for my stomach.  I have a very weak stomach.  Luckily I had some medicine from the first day which I got them from Ayuthaya 7 Eleven stall. 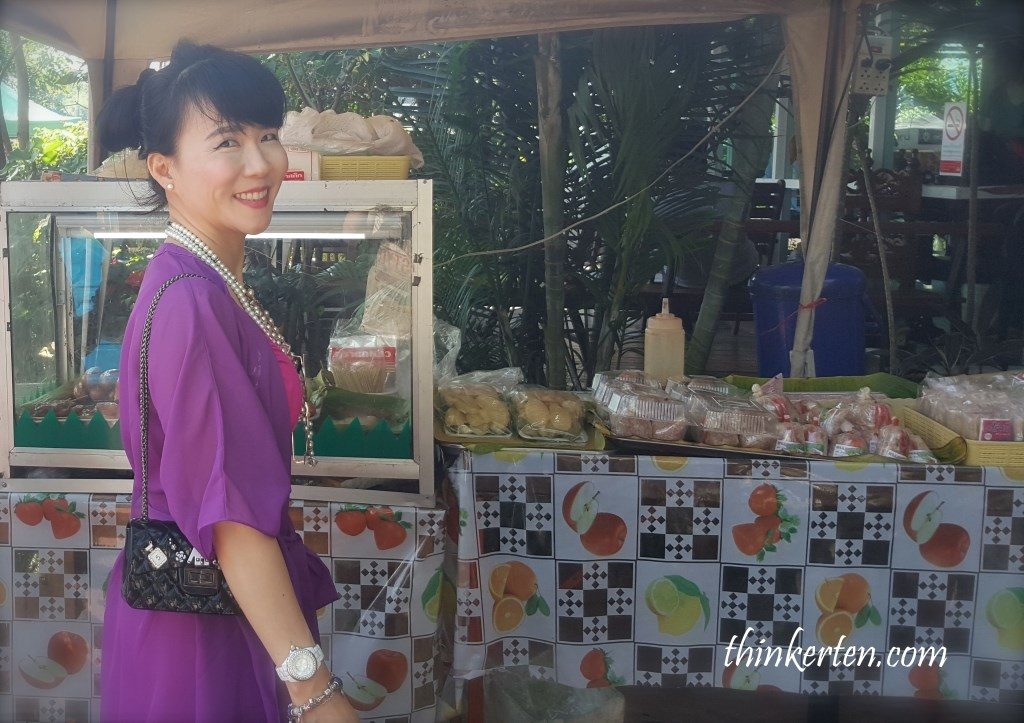 We rested half an hour in the Amazon cafe then we were on the highway again.  The road to Chiang Rai was quite wide and smooth but it was also very twisted.  Still I find it very safe, no holes on the highway and there are always 2 lanes for cars. 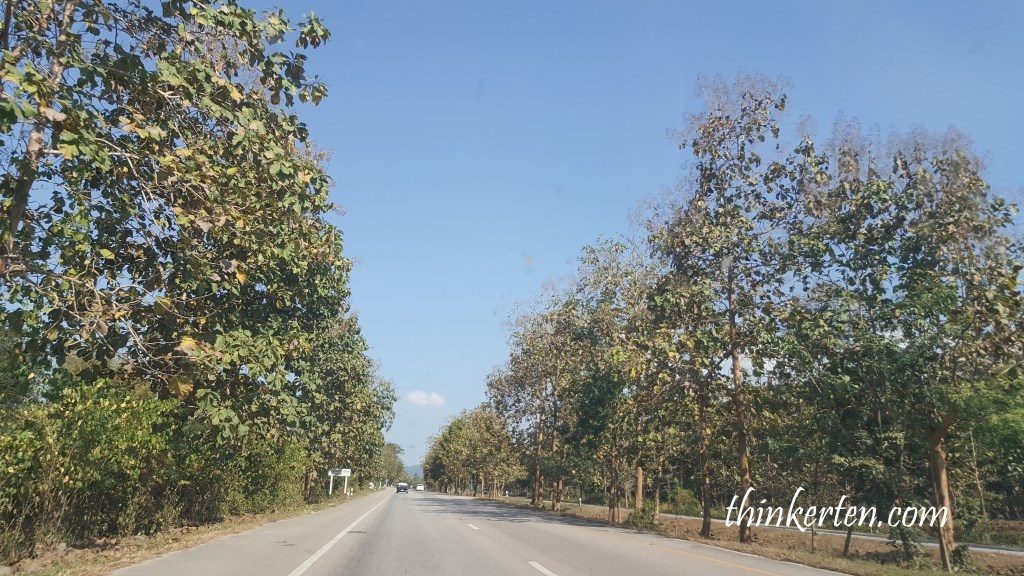 I saw many stalls opened for business along the highway to Chiang Rai.  We did not stop by to check what they were selling.  From afar, I could only guess those were tiny melon.  I wonder why the melons were so small?  May be not enough of nutrient to grow bigger. 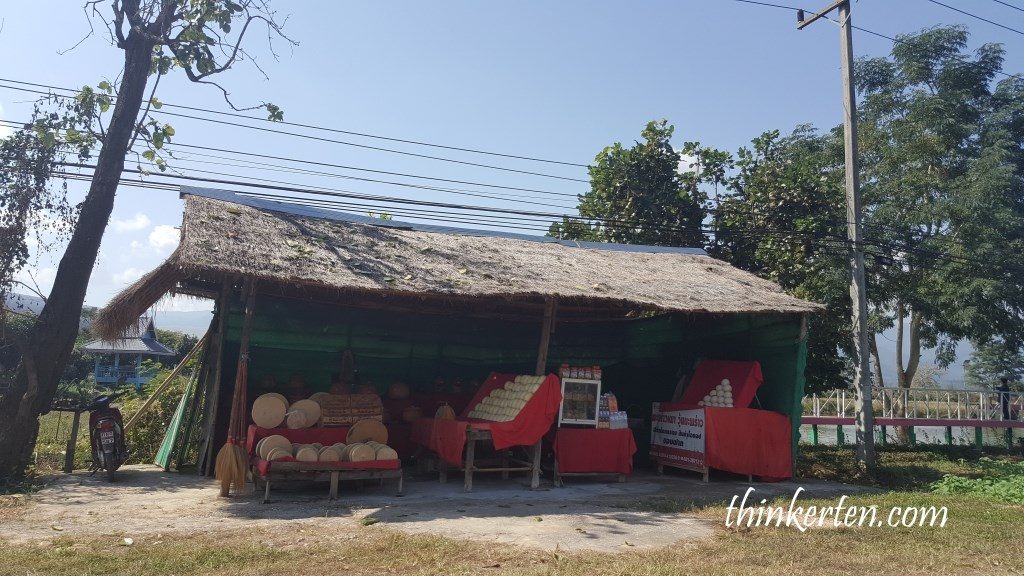 We stopped by before noon in this place along the highway, I do not know the name of the place, it look like a warehouse.  We just stopped by because we saw this gigantic “Incredible Hulk” statue at the entrance of the showroom.  Surprisingly the incredible Hulk status is in white color.  I guess he has not turned on the beast mode which suppose to be green. Throughout my 8 days self drive in Thailand, I saw roosters were used to decorated at the front of the houses and shops.  This rooster in the picture look super huge. 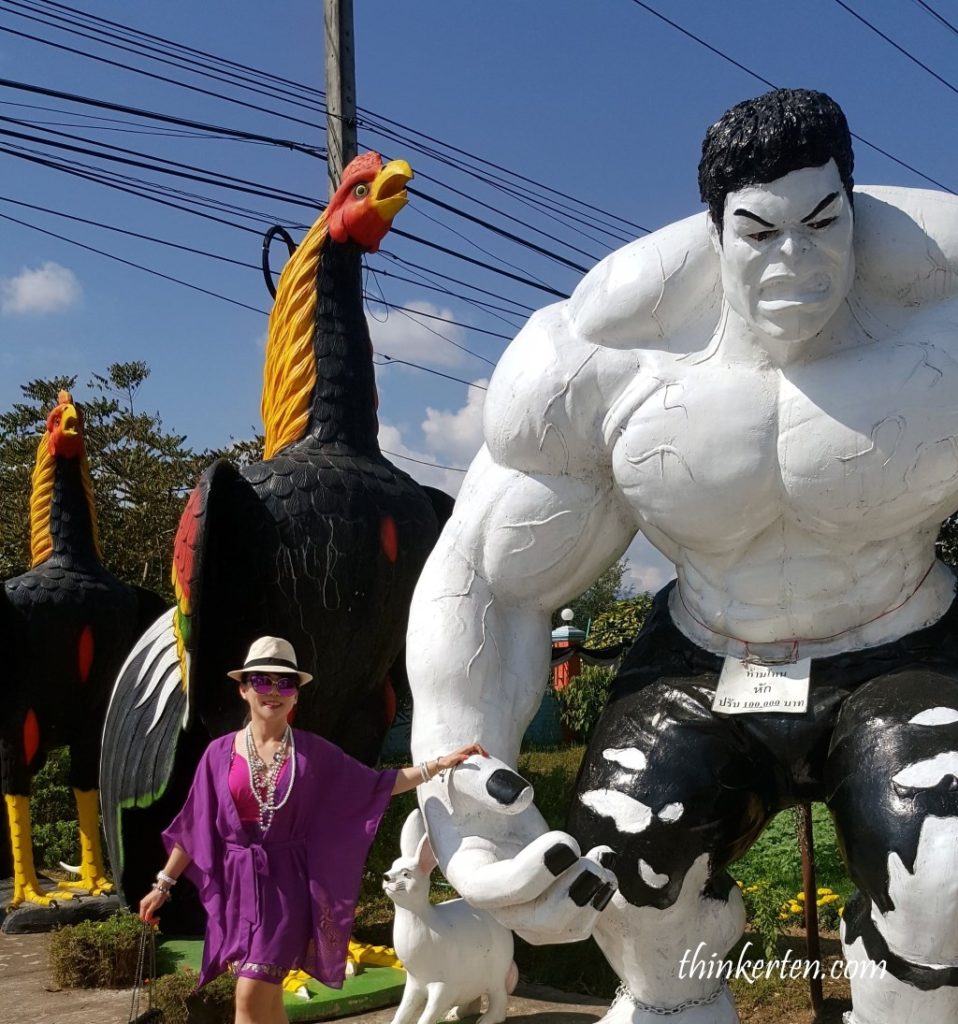 Inside the warehouse, I found colorful and fancy cars displayed beautifully there.

We arrived Chiang Rai at around 2m plus and had the Thai Wanton noodles 40 bahts per bowl.  I chose to eat here because the noodle shop is near the White temple.  Noodles tasted so so, at least it filled my stomach. 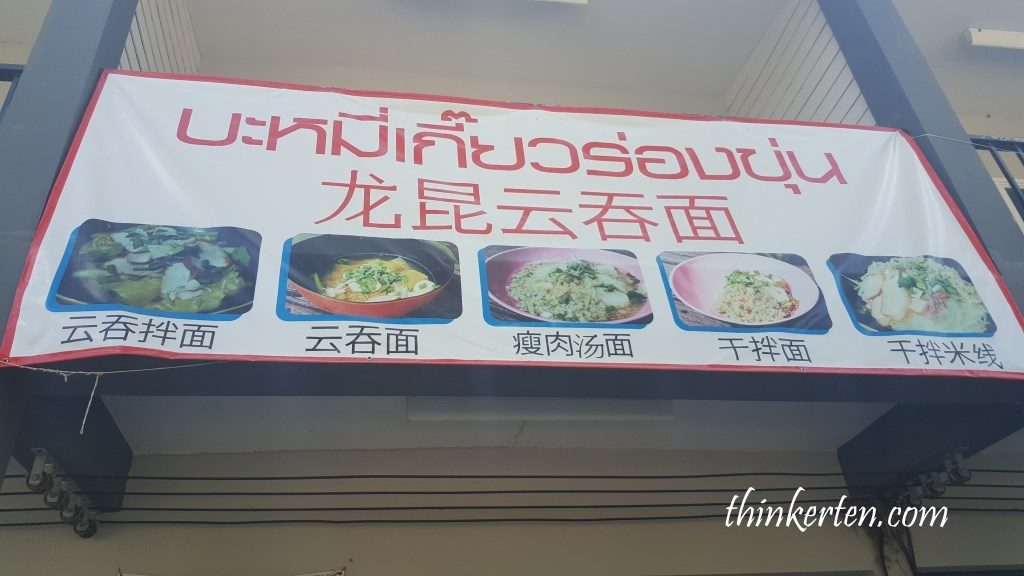 Singha Park is owned by Boon Rawd Brewery, the company who produce Singha Beer.  The park has also been sympathetically landscaped with trails, lakes and meadows all combining to make this an attractive destination for people in Chiang Rai.  The distinctive golden Singha logo dominates a small mound at the entrance to the park providing Thai visitors with the obligatory selfie opportunity.  I can only take the picture from afar because the weather was just too hot and too many people crowded around the Golden Singha logo.  There is an electric tram carries visitors to various parts of the park with stops at the fruit orchards, tea plantations and the petting zoo.  We wanted to get the tickets for the tram but it was all sold out for the day.  I thought we could hop on the tram, at least the tram has some shade so we could relax and kill some time before visiting the White temple again in the late afternoon.  Too bad, no luck to get the tickets. Too many tourists, no more tram seats for the day!

We had no choice but to visit the White temple next.This bizarre-looking white temple located near the Singha Beer Park, which took us 15 mins to arrive.

Wat Rong Khun is in Thai, better known to foreigners as the White Temple, is a contemporary, unconventional, privately owned buddhist temple in Chiang Rai.  Wat Rong Khun is a unique temple that stands out through the white color and the use of pieces of glass in the plaster, sparkling in the sun. The white color signifies the purity of the Buddha.

The time when we reached White temple was around 3pm and this was not the perfect timing because it was just flooded with tourists and too crowded to take any good decent pictures.  Also, the weather was just unbearable hot.

The below picture were taken under the shade.  See the people behind of me?  As you can see, the temple is quite small compared to the other temple in Thailand which has bigger courtyard. 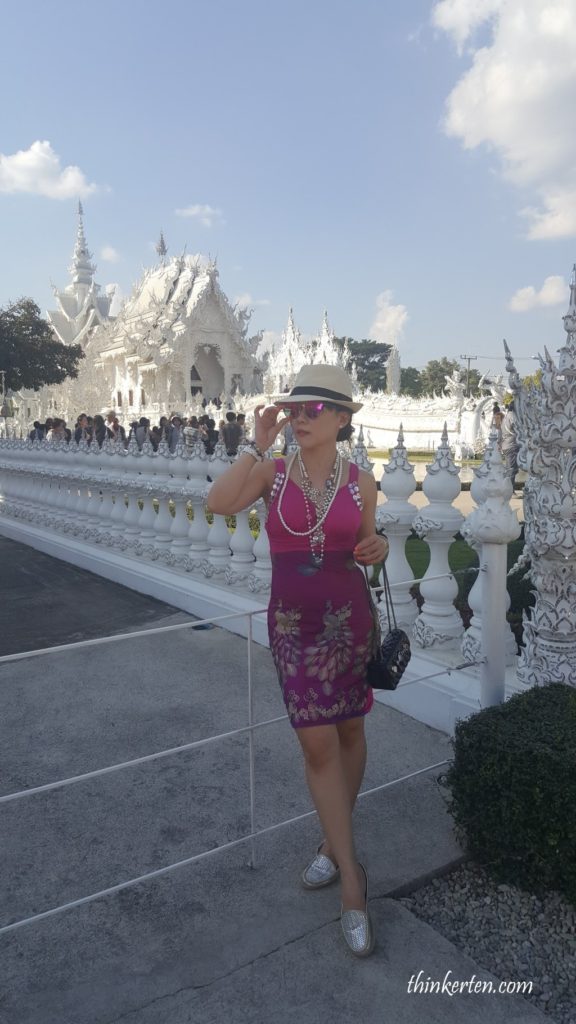 We did not enter the white temple because it was too crowded at the entrance, and the queue to get the ticket was just too long.  It was also super busy in this areas, there were many souvenirs shop beside the temple, but they are selling things way more expensive than the stalls in Ayuthaya.  Parking our car was also another headache thing.  I heard the best time to visit the white temple is early in the morning before the tour buses carring the tourists started to flood in.

Since we did not enter the white temple, so we drove to check in our hotel. We were staying at Phufa Waree Chiang Rai Resort for the night.  It was only half an hour drive from the white temple.

I took a picture outside of the Karen Long Neck village. It is really located in the middle of paddy fields/jungle. 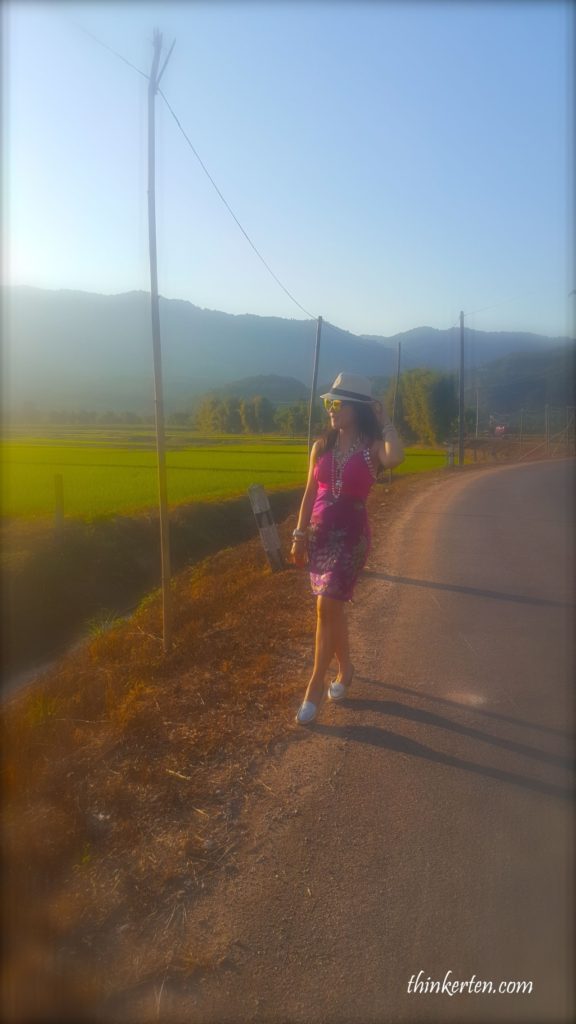 Before we entered the Karen Long Neck village, there were some native selling the souvenirs.  I saw this little cute girl just came back from school as she was wearing the school uniform.  She was nice enough to pose a beautiful smile with the exquisite headgear. 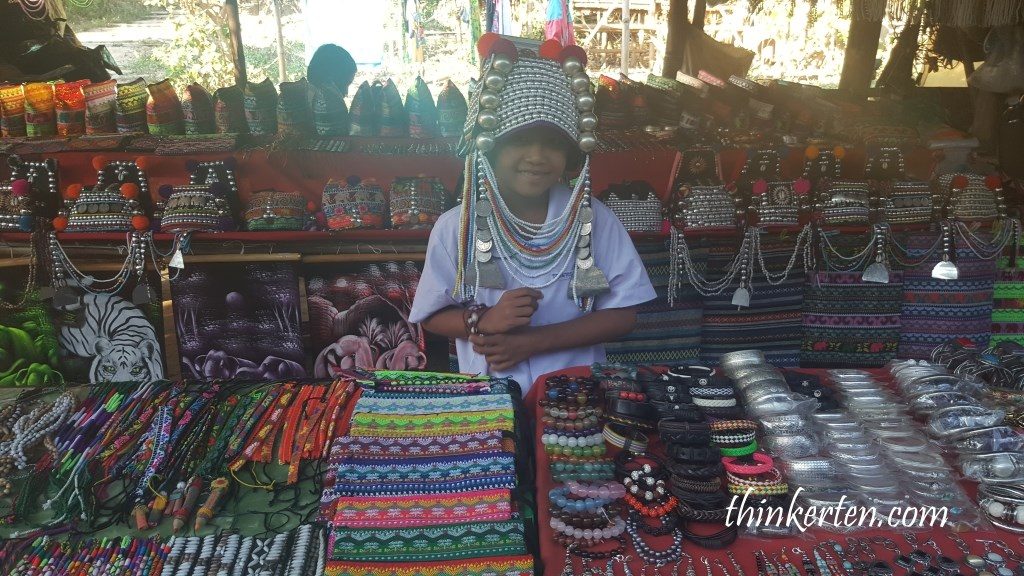 After we walked pass the souvenir stalls, there was a man standing to ask for entrance fees, 300 baht per person.  I thought it was a bit expensive and decided not to visit the Long Neck village.  After all human zoo is kind of mean . I was struggling whether to go or not….

Well, we were staying in Chiang Rai 2 nights so we can always come back again to the Long Neck village if we changed our mind. We did not visit the long neck village on that day.

The time when we left the Karen long neck village, it was around evening time, we then went to have a look at the University of Chiang Rai, I heard it was“ University in the Park”: known as the most beautiful university in Thailand with a commitment to being green and environmentally friendly. 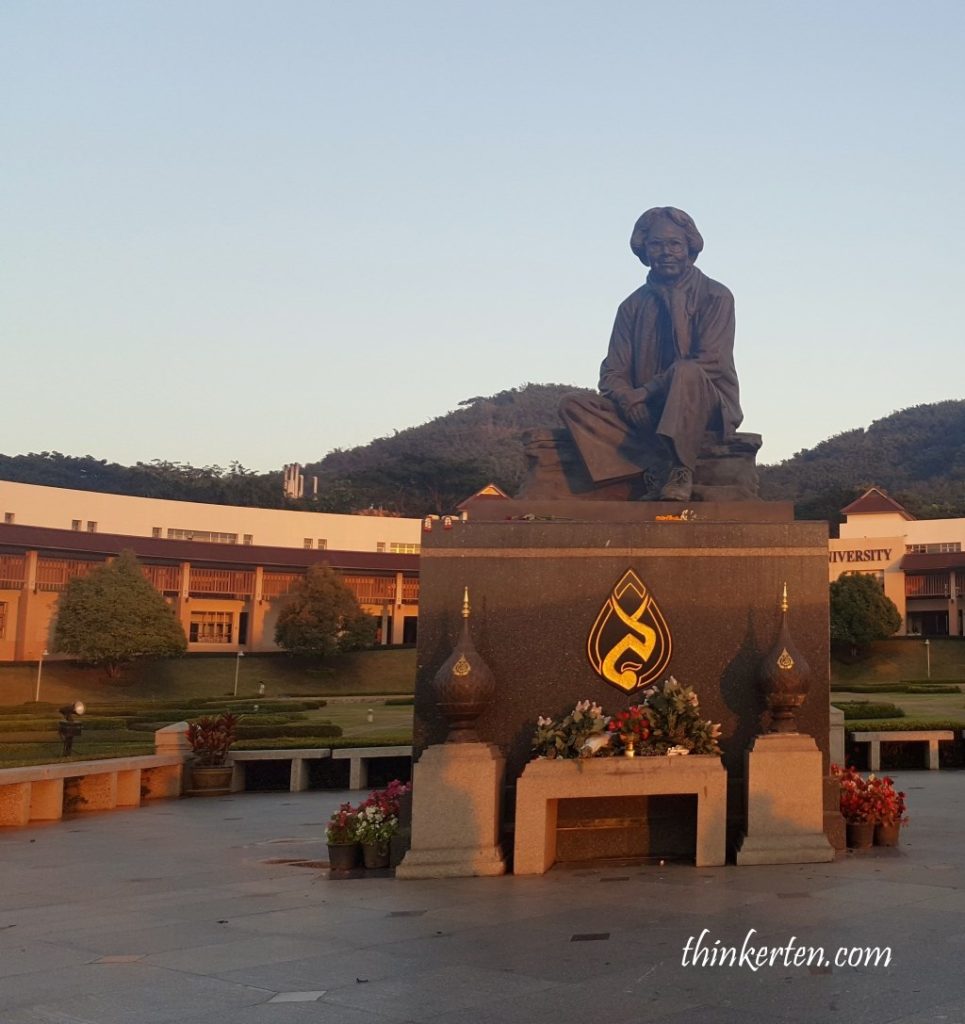 Around the university campus I saw three young nursing students waiting at the bus stop. I specially like the bus stop signboard saying: ” A journey of a thousand miles begins with a single step. ”

Weather in the evening was so much cooler as compared to the afternoon.  Strolling in the University garden has made me feel all nostalgic.  It reminded me of my university years in Australia and Japan. 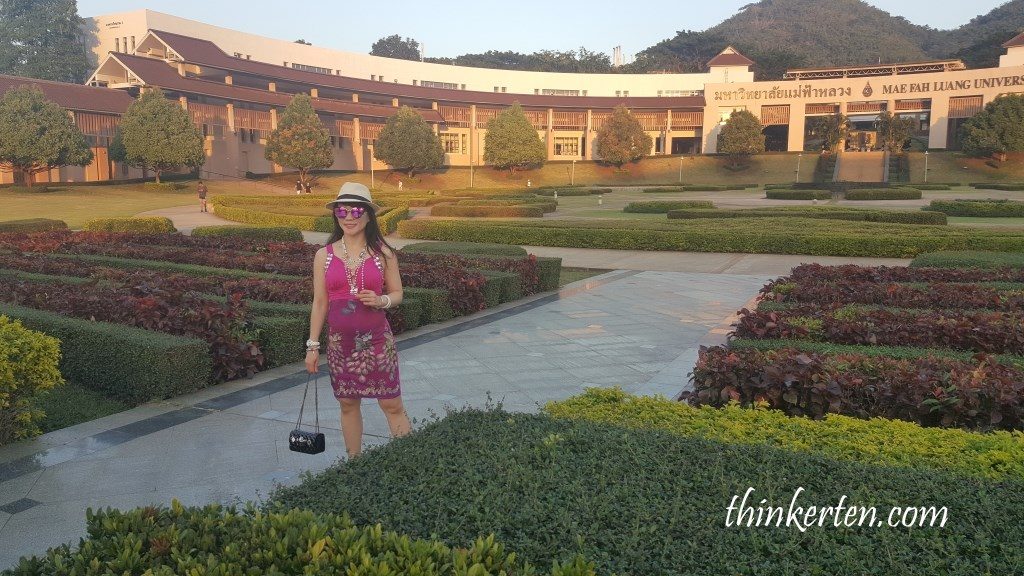 The sun was setting down soon and we hurried to find a restaurant to fill our stomachs before it was too dark.

Today was the day 4 in Thailand, and we thought of having a change in our menu for dinner, so we had Shabu Shabu steamboat in a Japanese restaurant just next to our Hotel, Phufa Waree Chiang Rai Resort.  It was a buffet which include; slice of pork, chicken mince and vegetable.  There were also some sushi california rolls and Takoyaki given as side dish.  I find it reasonable, just 299 Baht per person.  I ate the hot shabu shabu eagerly which burned my tongue. After dinner we walked back to our hotel to have an early rest.

Day 4 was a weird day, first we went to the white temple but it was too crowded, so we decided not go in the temple.  We went to Singha Beer Park, we did not manage to get the tickets for the tram to visit the petting zoo and other parts of the park.  Lastly, we went to Karen Long Neck Village but we were hesitate to visit the village because we still wanted to check out the other Karen Long Neck village which is only 5 mins drive from our hotel.  It looks like day 4 was not a smooth day.