Krakow is an ancient city in Poland, it used to be the capital of Poland but the capital was changed to Warsaw now.  This is one of the best city in Europe and not many people know about it as yet.  Compared to Prague and Berlin, the 2 previous cities I had just traveled for the past few days. Things in Krakow is a lot more cheaper, in fact, I regretted doing too little shopping while in Krakow.

In this wonderful city of Krakow, you can easily access to many of the main attractions just by foot in the city in a day without using car or buses.

This is one of the most famous landmark in Krakow.  When Krakow was the capital of Poland, the Wawel Royal Castle houses 3 dynasties of Kings but now it is used as a historical museum.

The castle is very huge and very nice to walk around in the early morning with sunny weather. 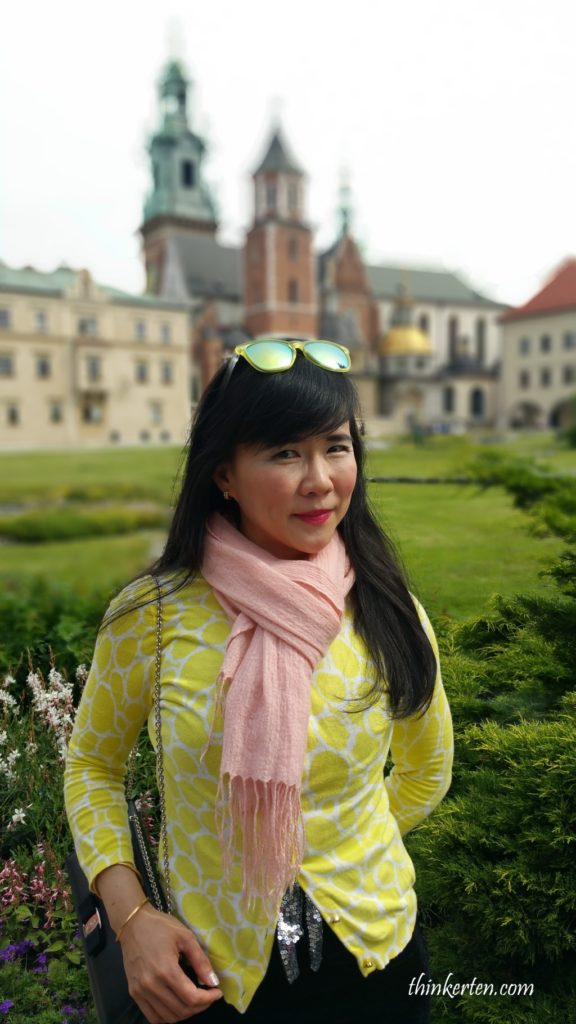 Wawel Castle is a complex rather than just one building, which houses a series of exhibitions and attractions.  There is a charge  for each entrance in different site.  We spent quite a fair bit of the time in the Wawel Cathedral, taking pictures with the stunning Cathedral and of course the well maintained garden. Wawel is the crown jewel of Krakow’s architectural treasures, predominantly using Romanesque, Renaissance and Gothic style of architecture.  To me, I feel this Castle Cathedral has more of the Romanesque and Renaissance style as the top were semi-circular arch shape.  If you use some imagination,  you would think a dragon stayed at the top of this castle. 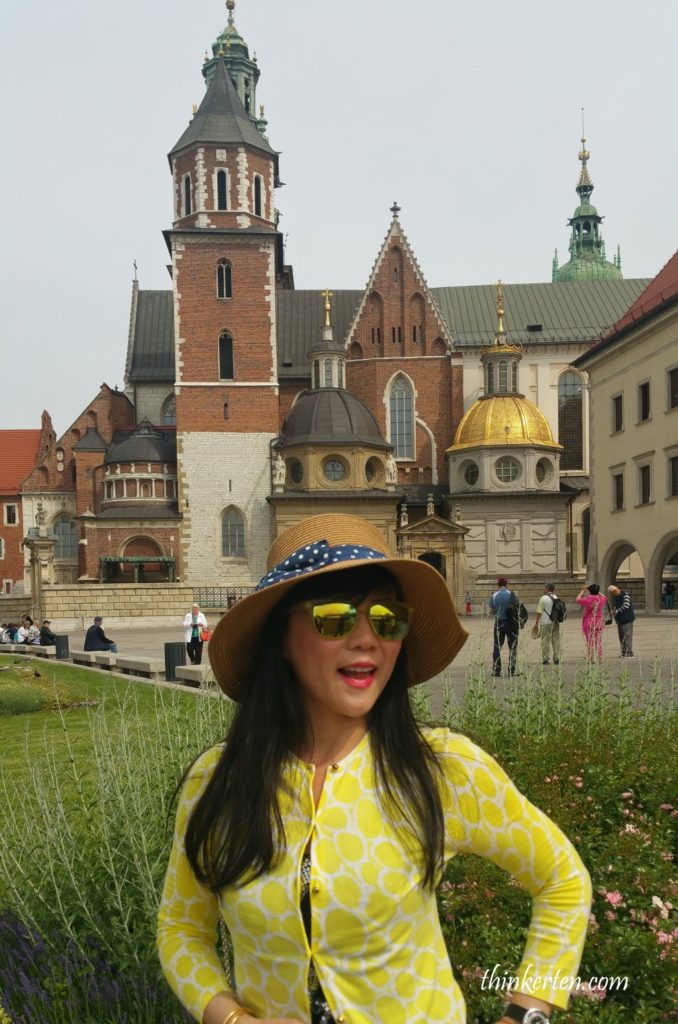 The courtyard look more like the Rome architecture to me.  It was flooded with tourists when we were here in the early morning.

This is simply one of the most impressive pieces of European Architecture. There are many rooms which some are museum opened for public. 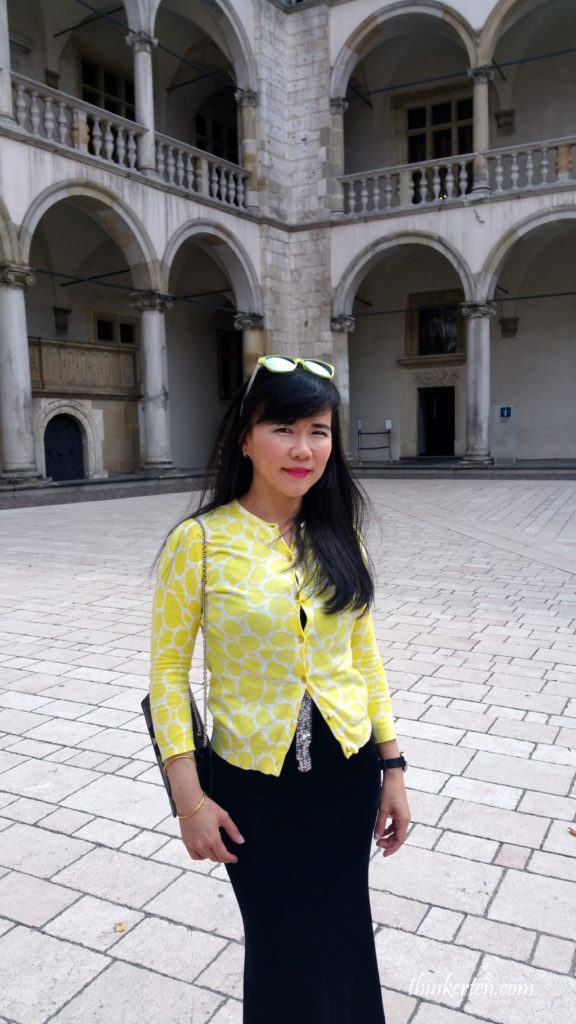 Sandomierska Tower is also located in the Royal Castle, it was built around 1460 to defend the castle against attack from the south.  It is also known as “Fire Tower” use for firearms and artillery.  There is also a dungeon in the Tower.

You could stay here whole day to explore different sites in this Royal Castle if you have enough time. There is a great view of the whole city of Krakow and the Vistula River from where I sat.

An old man with traditional Polish costume was playing accordion on our way out to the castle.  Accordion is the music instrument origin from European country, it was my second time in this tour hearing accordion played, the first time was at the cruise in Prague few days ago. 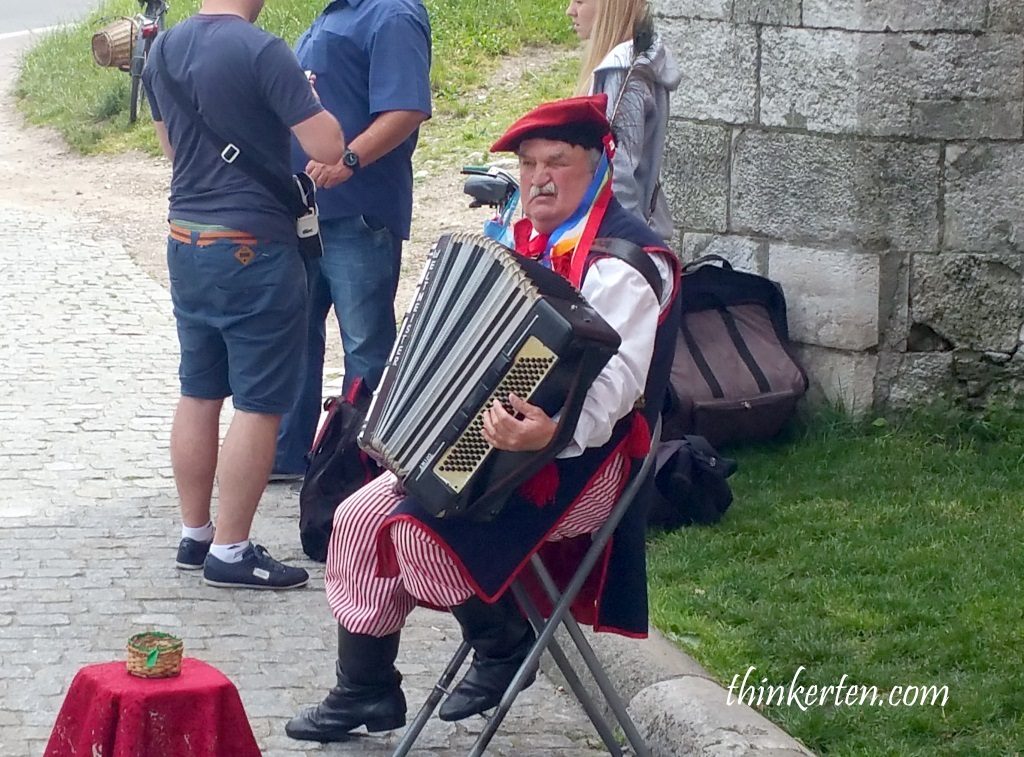 We walked on the Kanonicza street which is one of the cobblestone path from Wawel Castle to Old Town.  Luckily I was wearing a flat shoes because walking on cobblestone could be tough, especially with heels.

The buildings look so beautiful and grand and it used to be mansions of noblemen, even Pope John Paul II used to stay in Kanonicza street but his residence has turned into a museum now.  Giving a big wave at my favorite street in Krakow! 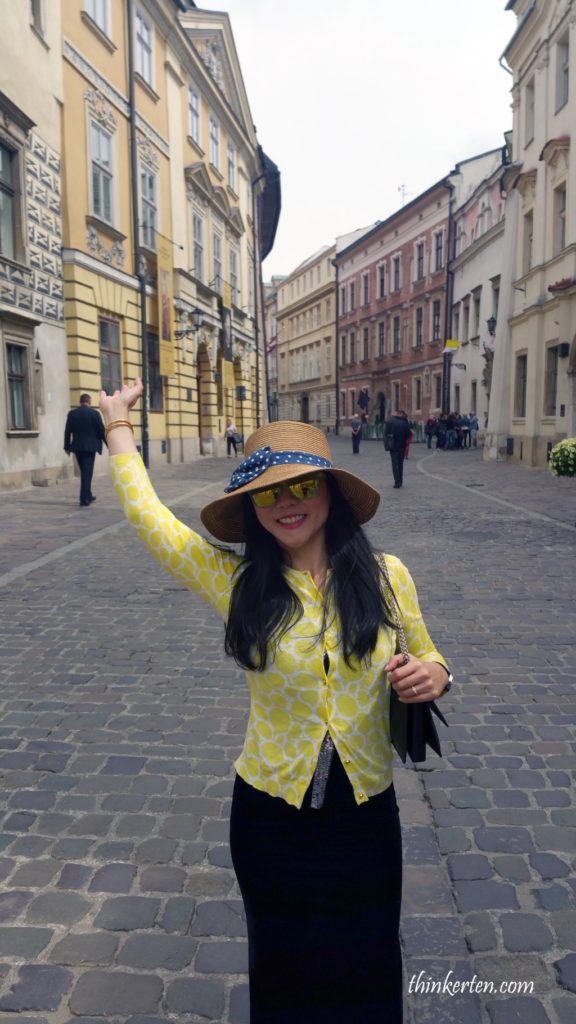 There were horse carriage picking up tourists when we arrived at the Main Market Square. 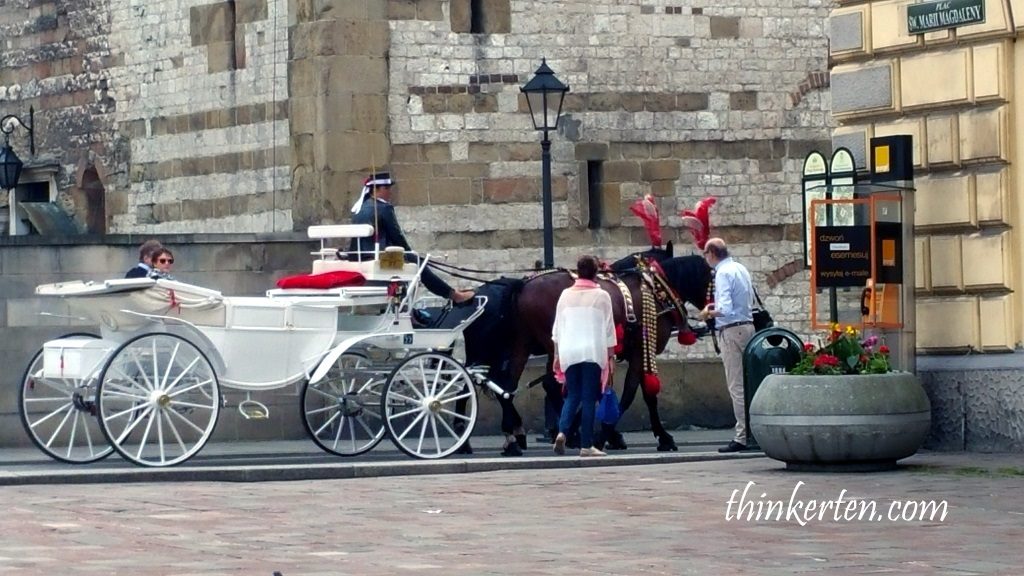 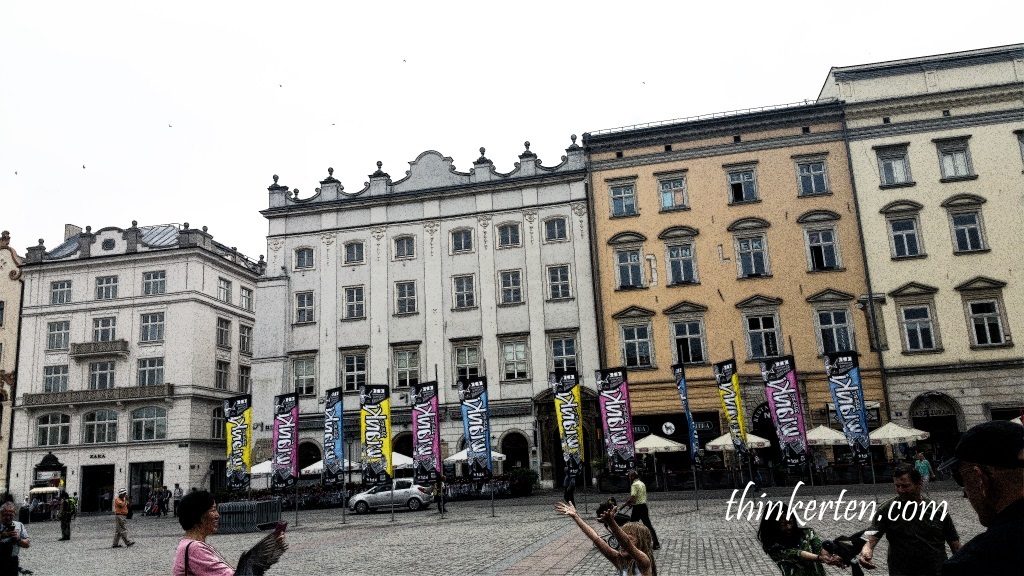 Tourists were feeding the happy pigeons in the main square. 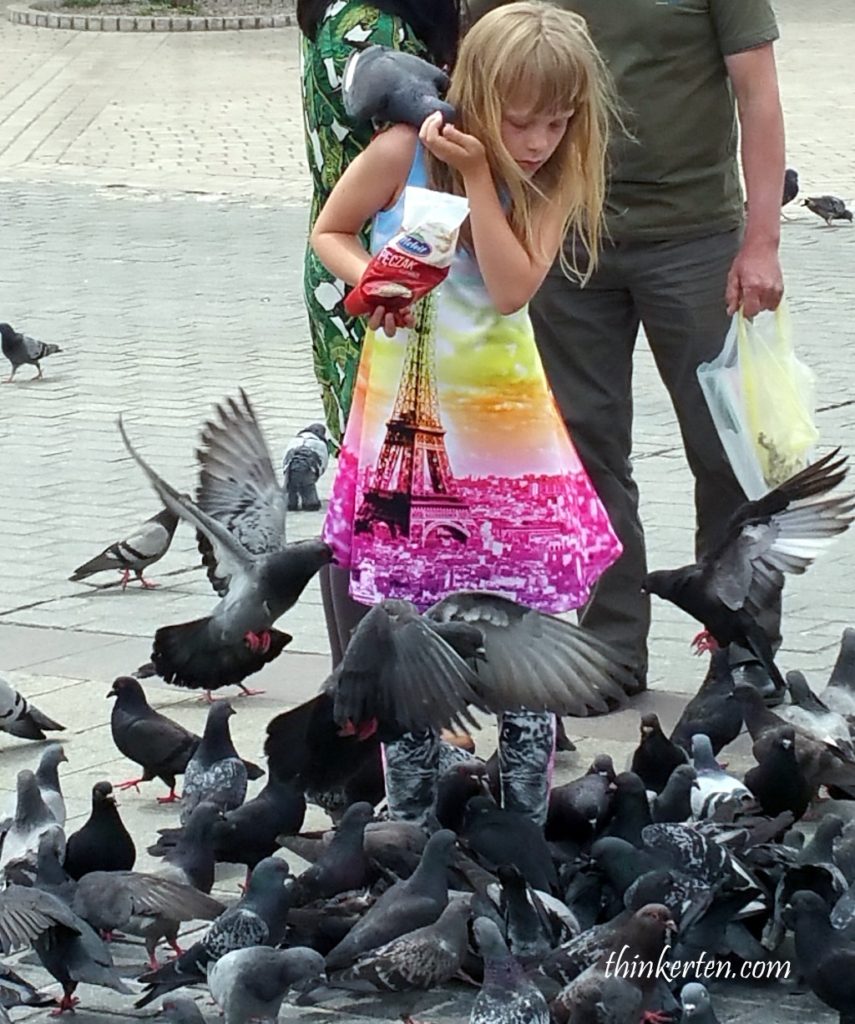 St. Mary’s Basilica is located in the Main Market Square in Krakow.  You can see two towels built in different height.  According to Legend, the two towers were built by two brothers, one of whom grew jealous of the other’s work and killed him with a sword.

St. Mary’s Basilica is particularly famous for its wooden altarpiece by a famous German sculptor Veit Stoss in Krakow, it is also the largest Gothic altarpiece in the world and also a national treasure in Poland. 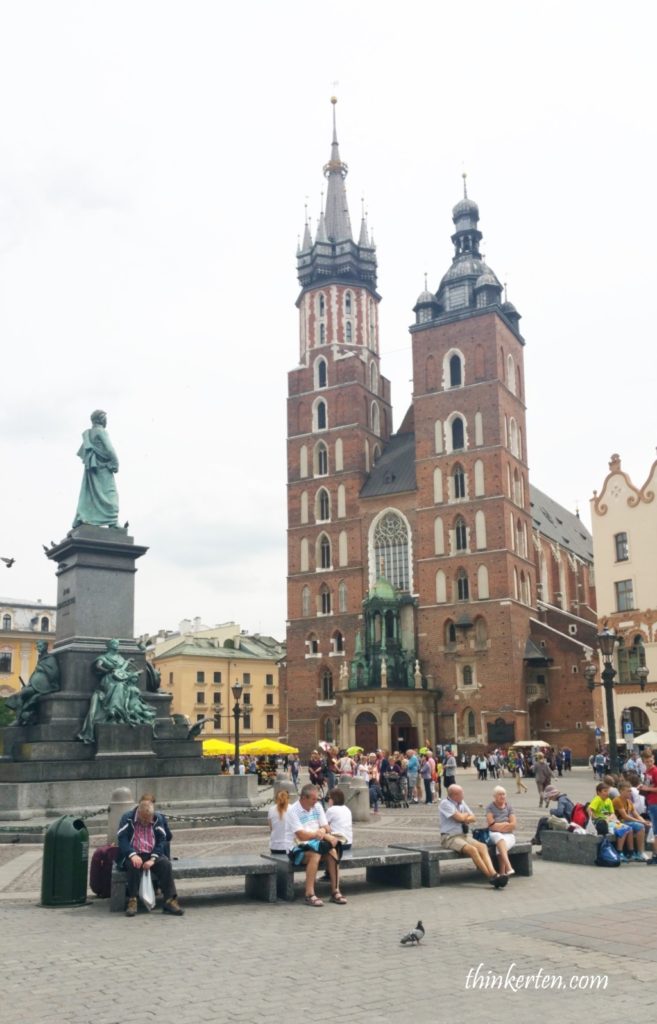 This is one of the city’s most recognizable icons in Krakow.  There are horse carriage in front of the Cloth Hall but we did not have enough time to try the horse carriage.

The Cloth Hall is very big and there were stalls selling amber jewelry, lacework, cloth handicrafts, wood carvings, sheepskin rugs and all sorts of Polish souvenirs. 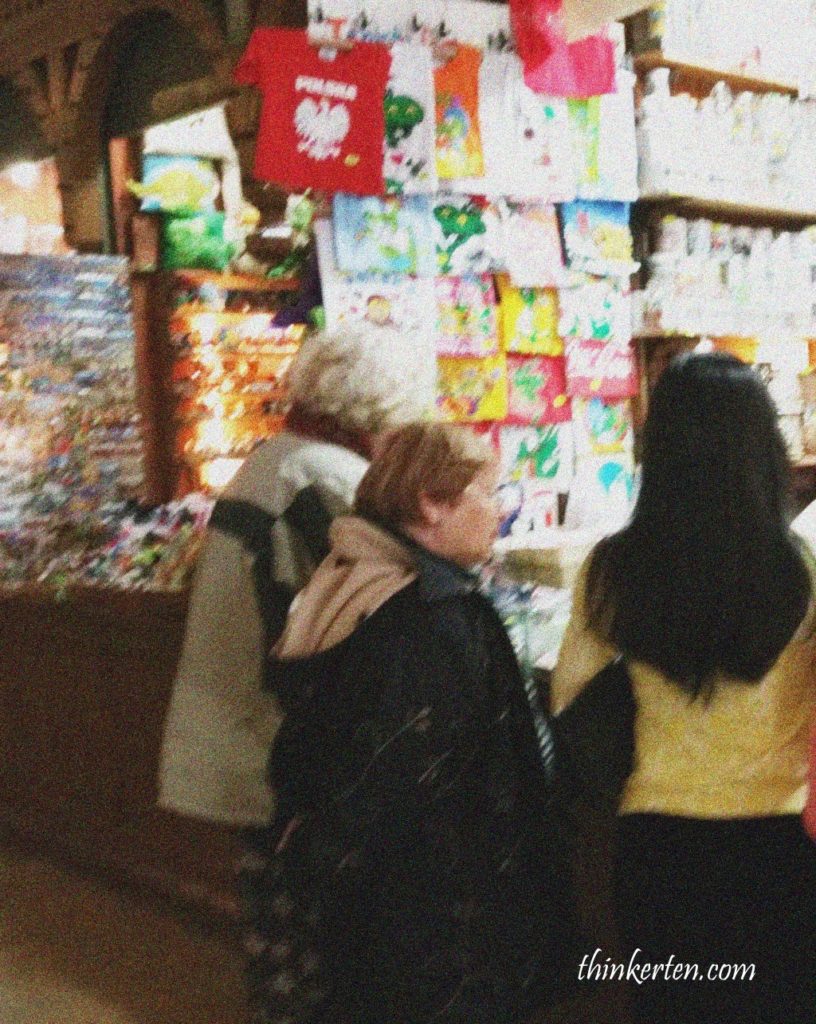 Few florist stalls can be found outside the Cloth Hall, in the Main Square.

Street artist selling their masterpiece at the corridor of Cloth Hall. 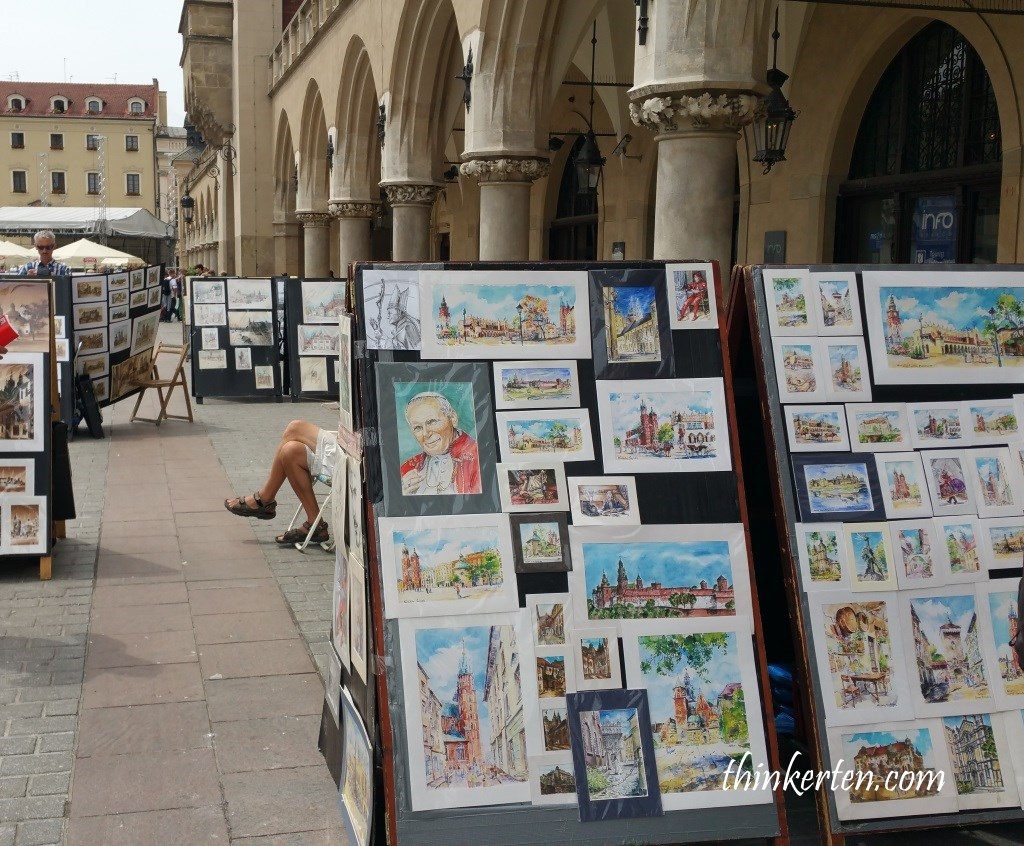 The Town Hall Tower is one of the focal point in the Main Square.

A Polish armored guy was spotted walking handsomely in the Main Square.  See the long feathers in the wings behind his back?  It was also known as Polish Hussars or Winged Hussars, refer to a brave warrior horseman. The Winged Hussars is very famous for it effective military forces and their clever military tactic.  I was glad to have captured this guy cool outfit and yes, he stared at the camera too! 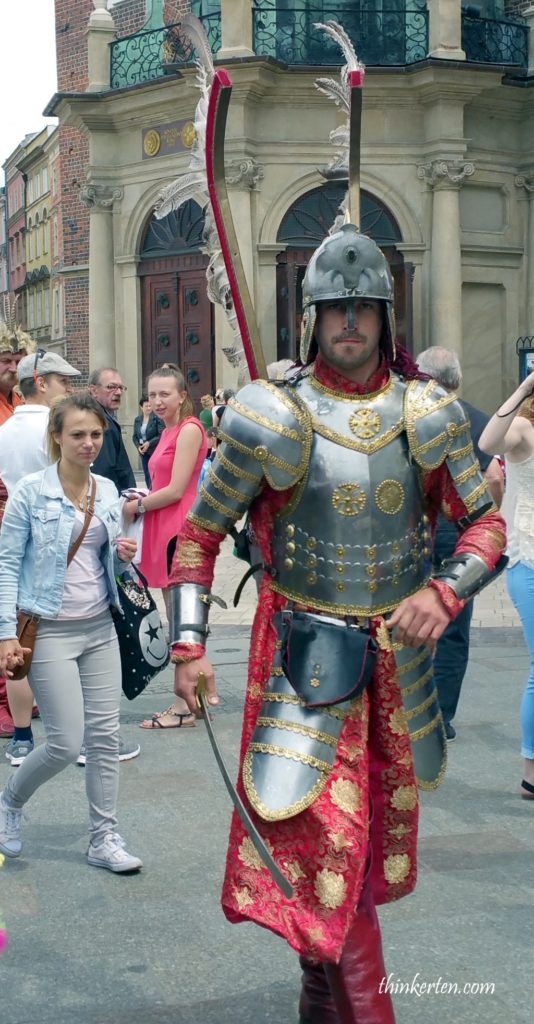 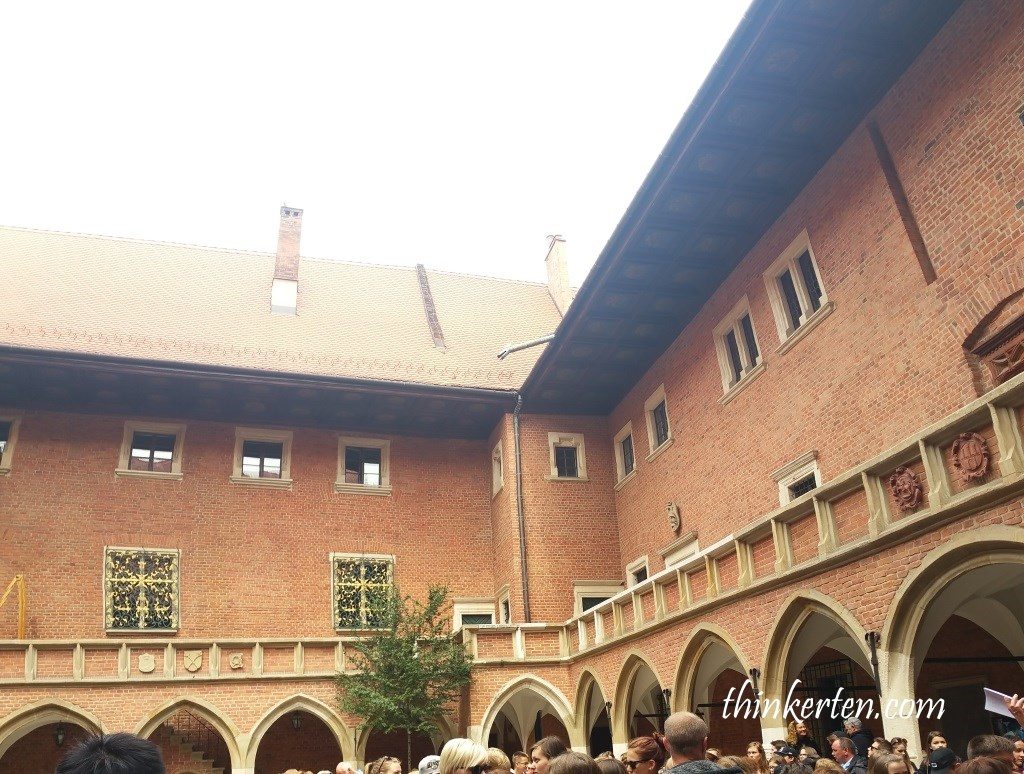 There is another highlight in the courtyard is the University clock.  It was packed with people when we were waiting for the clock to ring.  Some wooden figures of kings and famous professors parading to solemn music, and it only last less than a minute. 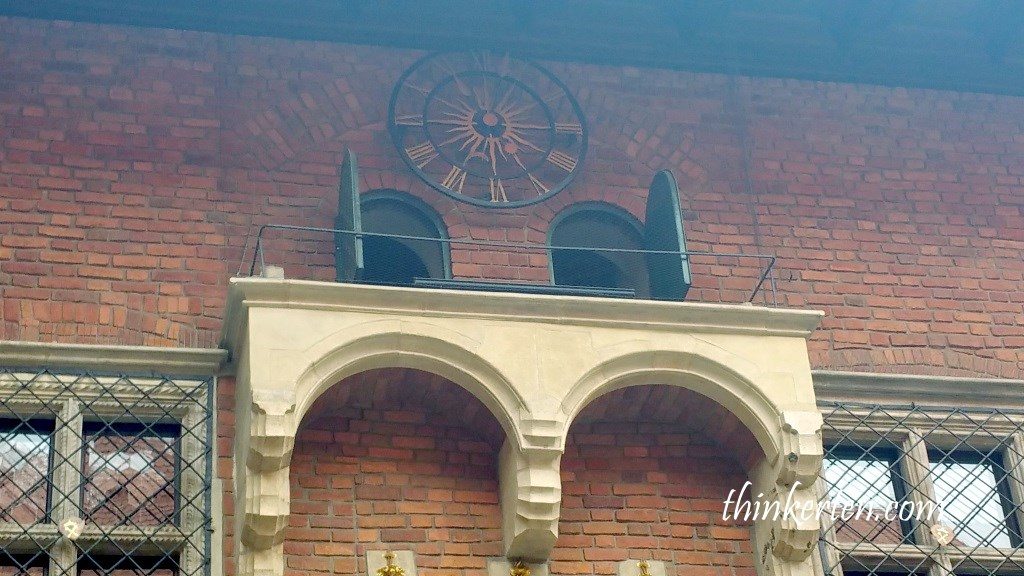