I was here first time with my BFF, Sharon from Malaysia many years ago. Coming back here again recently has brought me so much fond memories.  I remembered the first time I was here was a hot afternoon but it was drizzling with rain in the evening when I came the second time, the park is about to close. 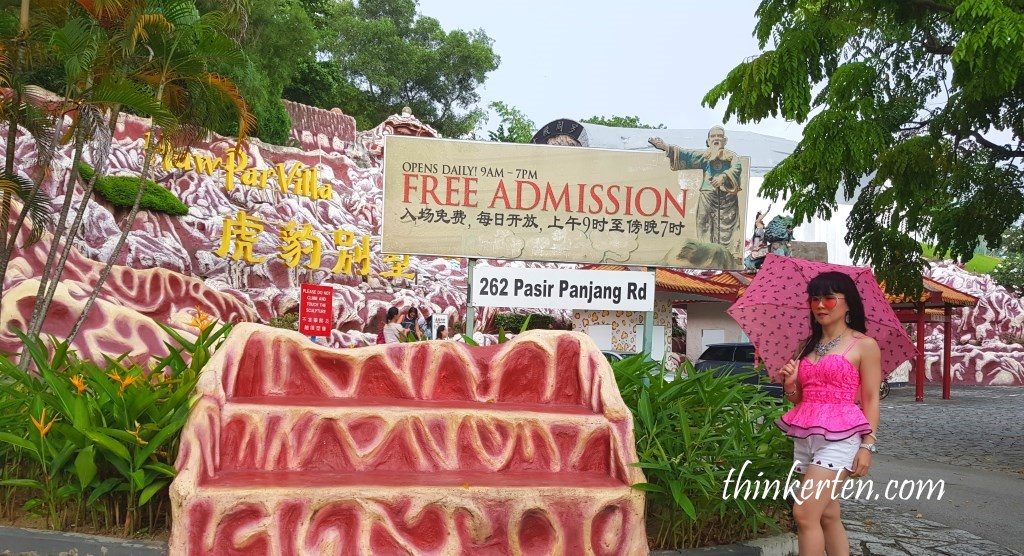 I heard about Haw Par Villa when I was a child and know there is an entrance fees to enter the park, these day the entrance is free.  The operating hour is from 9 am to 7 pm.  I arrived at 6 pm and only have about one hour to explore before it closes. 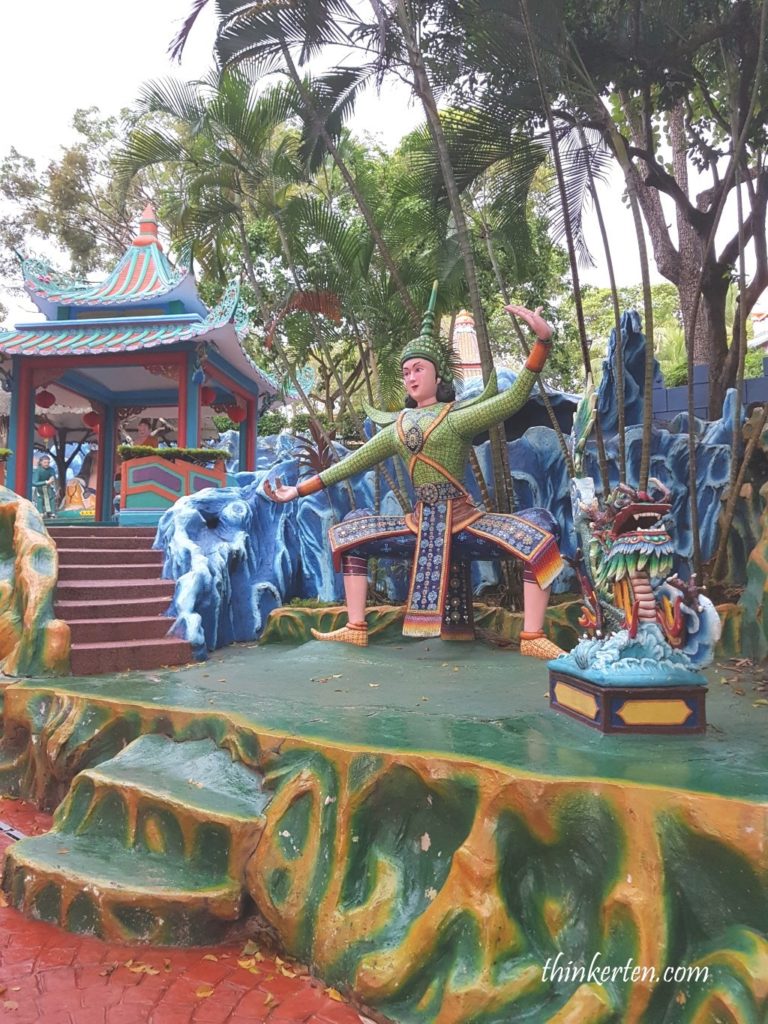 The park originally called Tiger Balm Gardens, was built in 1937 by the two Burmese-Chinese brothers who also the founder of Tiger Balm oil.  The Haw Par in the park’s name is based on the Aw brothers’ personal names,  Aw Boon Haw  and Aw Boon Par /胡文豹. 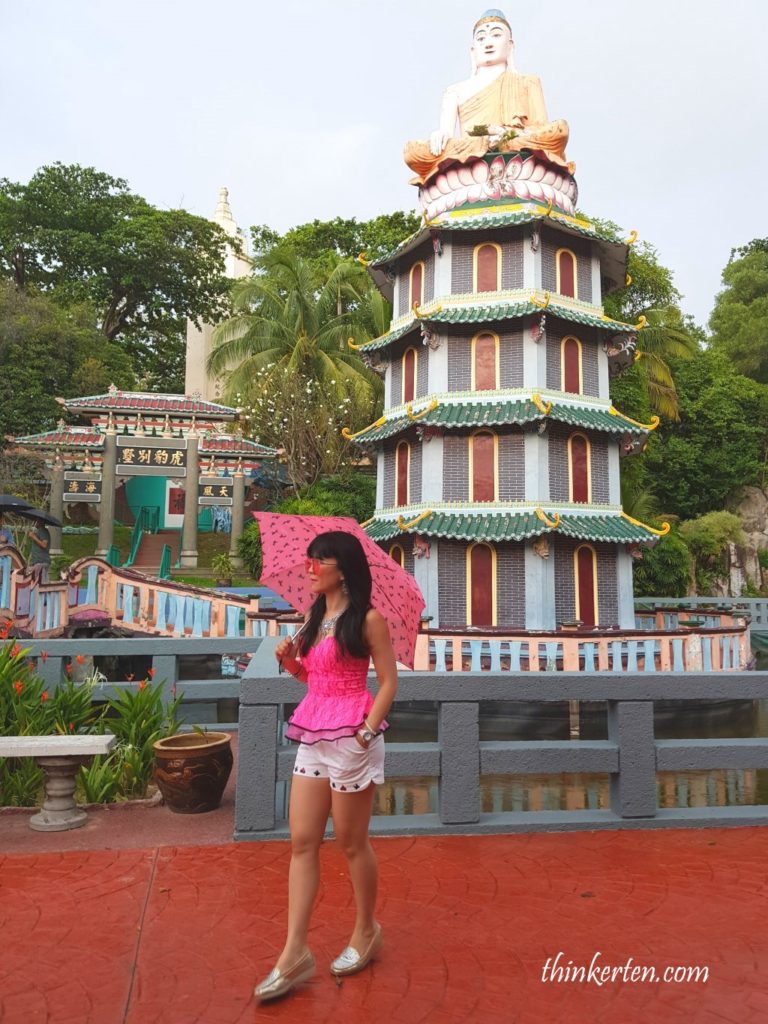 Why did Aw’s brother build the Park?

They built the Park for educating Singaporean Kids about the traditional Chinese values and back then there is no theme park at all in Singapore.

There are over 1,000 colorful statues and figures on display, from animals to human and deity.  You name it, they have it in Haw Par Villa.  You are about to embark a Chinese folklore and mythology journey. 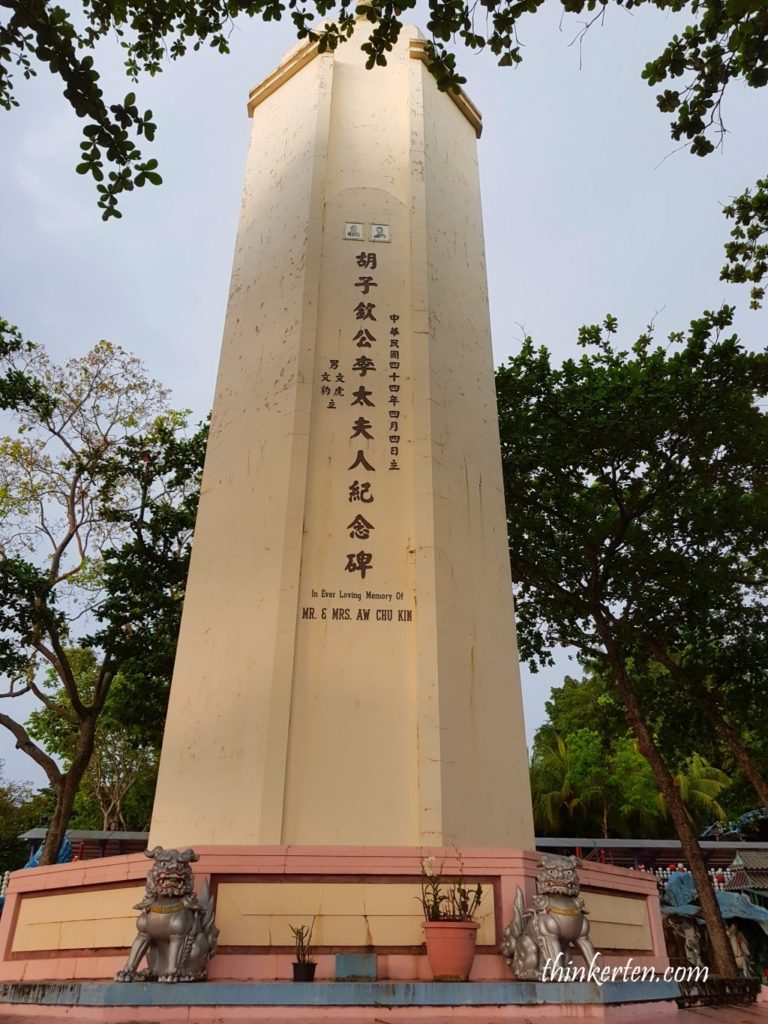 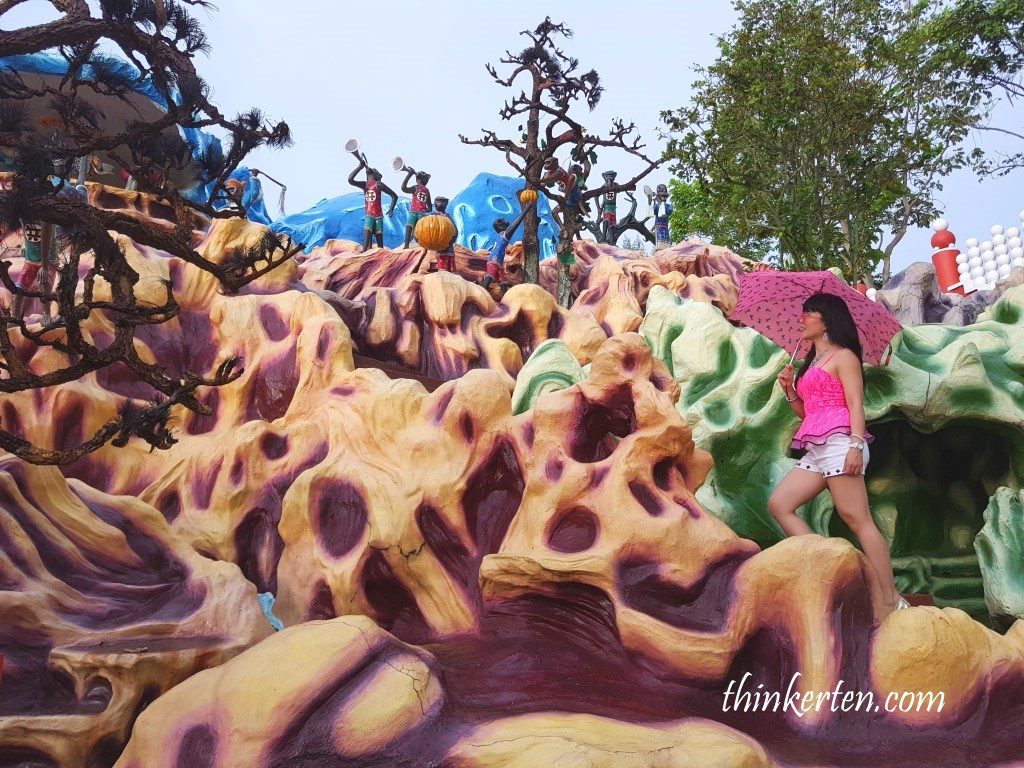 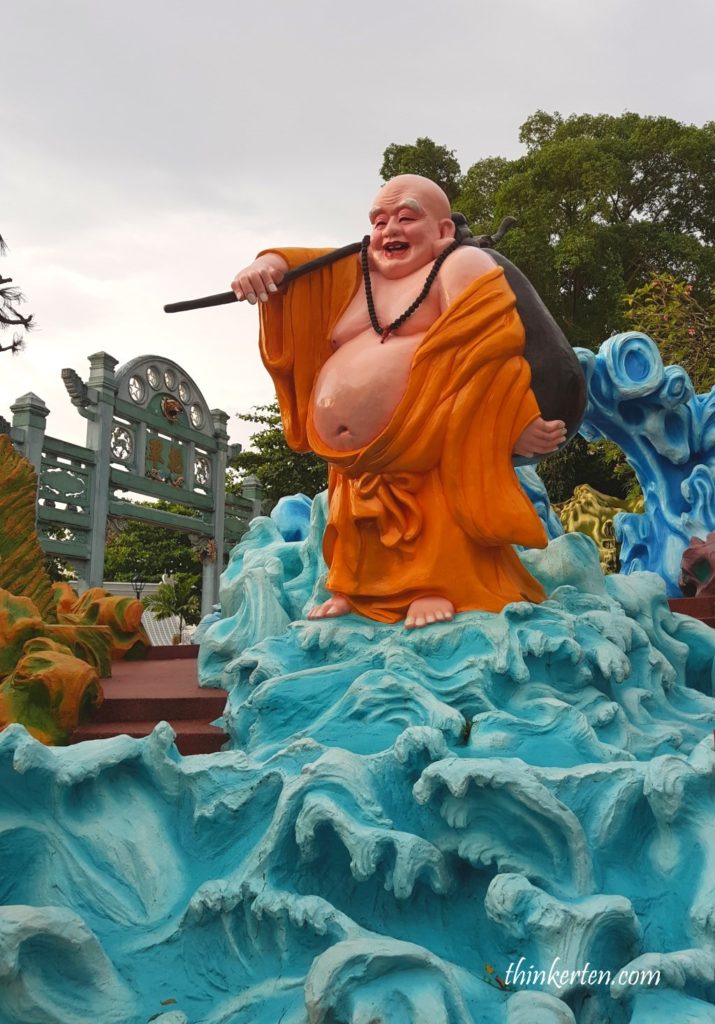 Haw Par Villa is divided into many areas, with each portraying different stories based on famous Chinese mythological personalities, deities and legends. 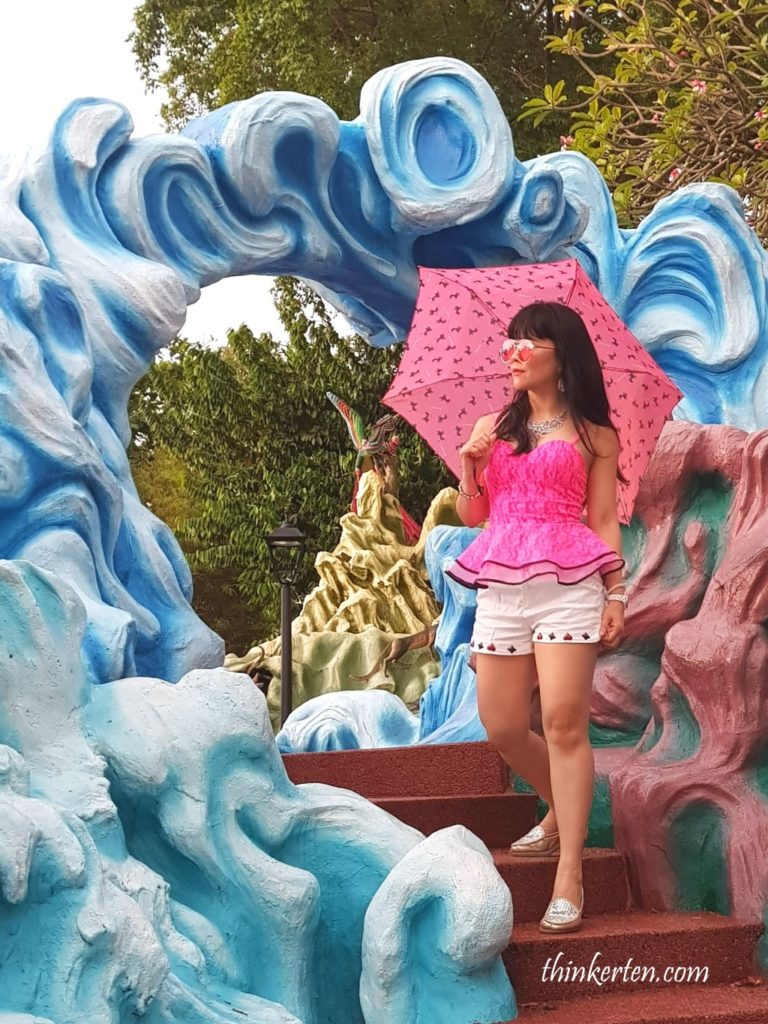 Jiang Taigong Fishing, Those Who Are Willing to Hook

The story goes like this, the old man Jiang fish in an unusual way. He hung a straight fishhook, without bait, three feet above the water.   Nowadays, people use this old idiom “There are always fish willing to be caught by angler Jiang Taigong” to describe someone who willingly falls in a trap or does something regardless of the result.

A little pagoda behind me, pagoda is used as Taoist houses of worship, so it is not uncommon to find one in Haw Par Villa. 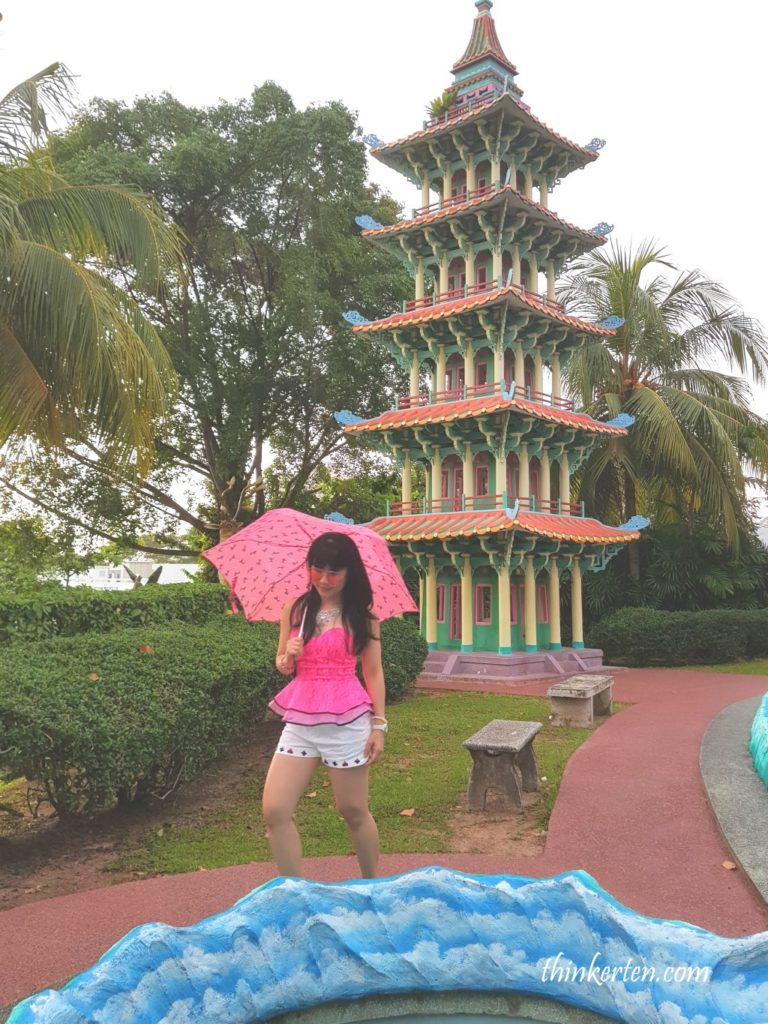 Two most iconic animals : Tiger and Leopard in the Park

Two most iconic animal represent Haw Par Villa, one is the tiger and the other is the leopard, representing the two brothers. 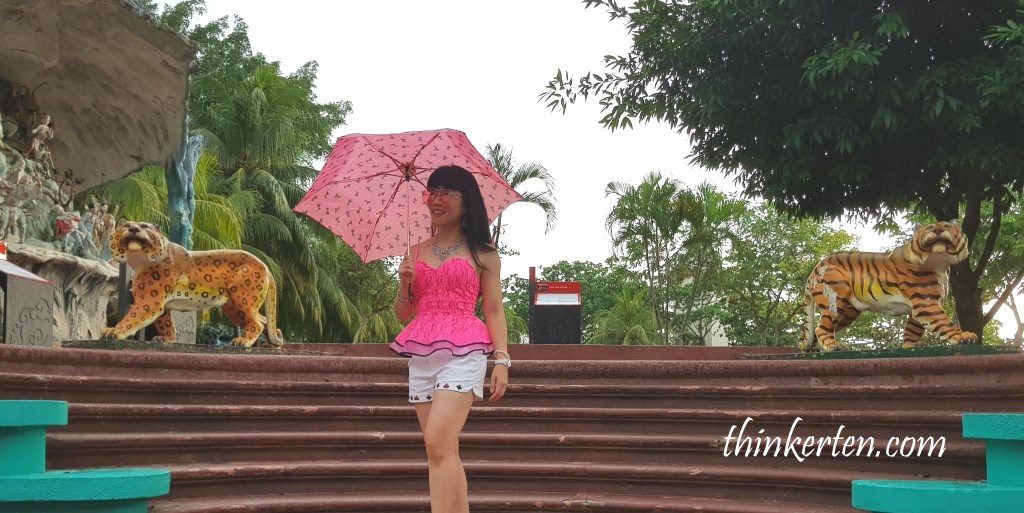 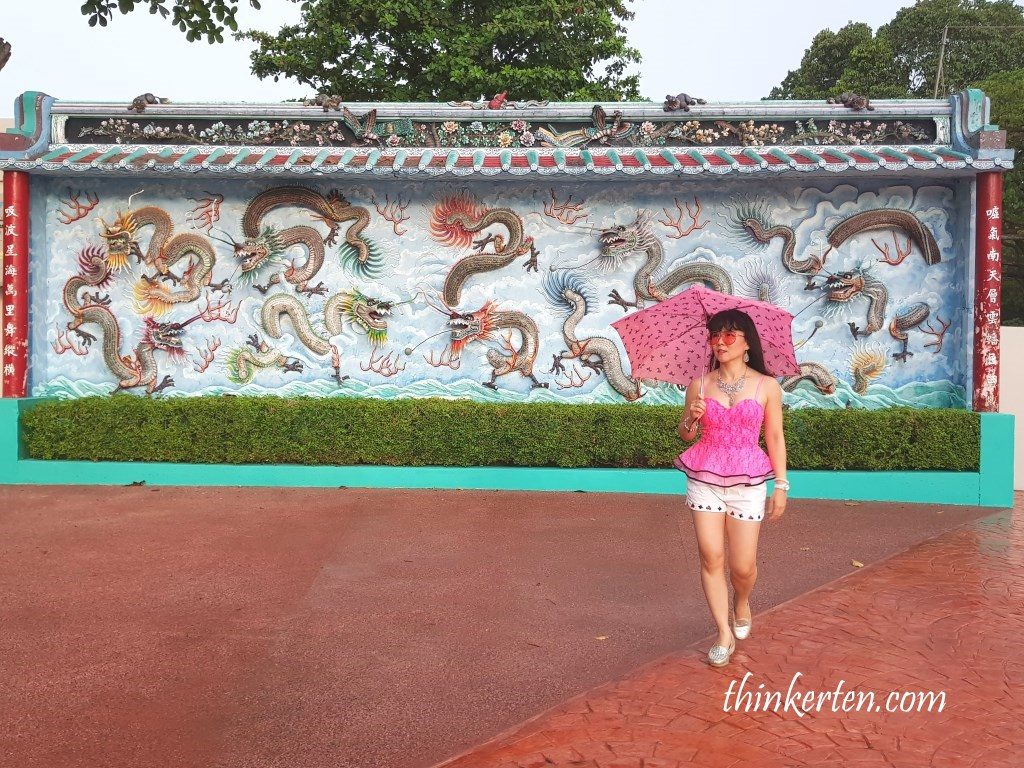 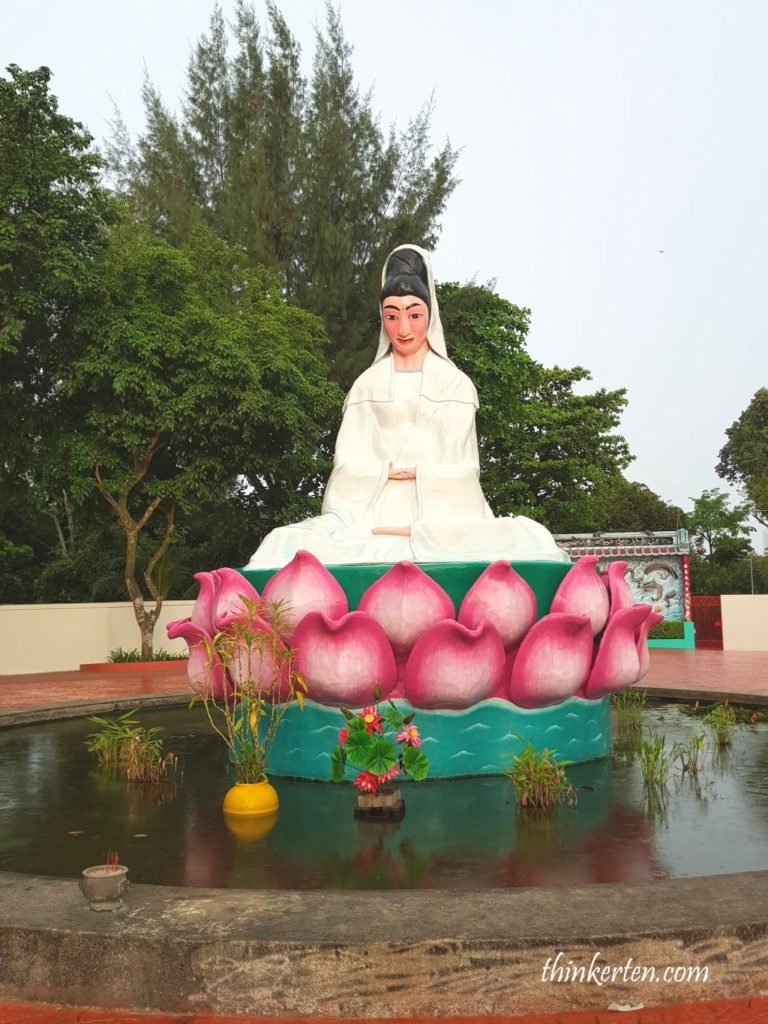 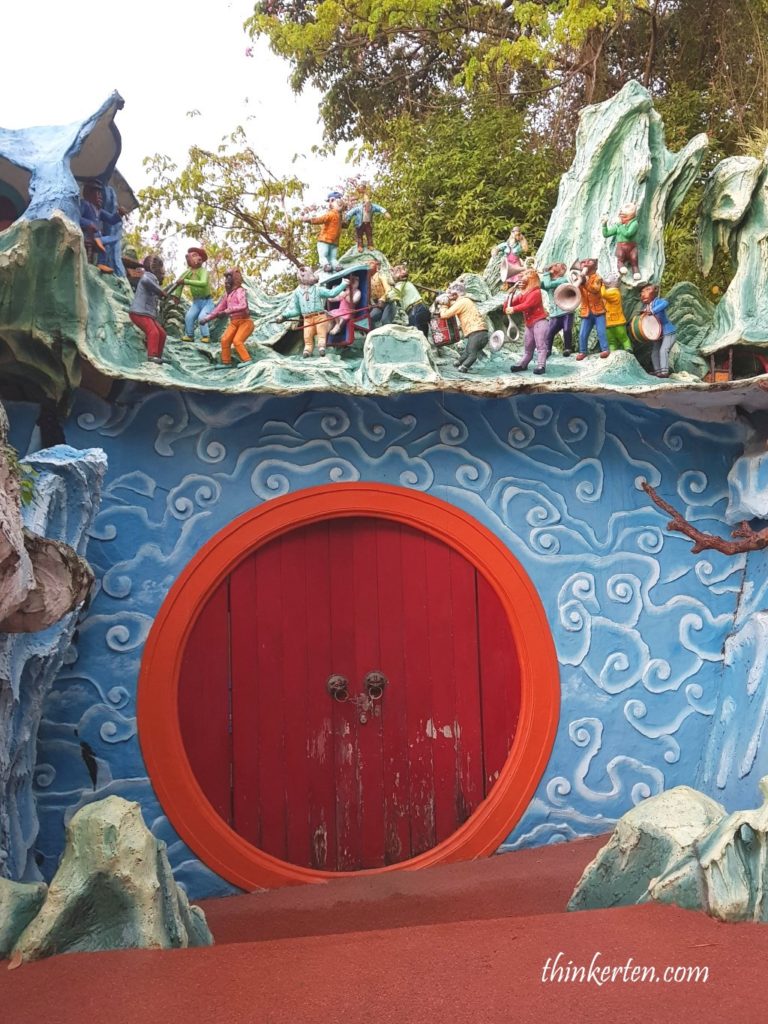 It was late and I could not find the most famous site, the Ten Courts of Hell.  Be prepared, some of the sculptures were completely weird and can be very frightening. 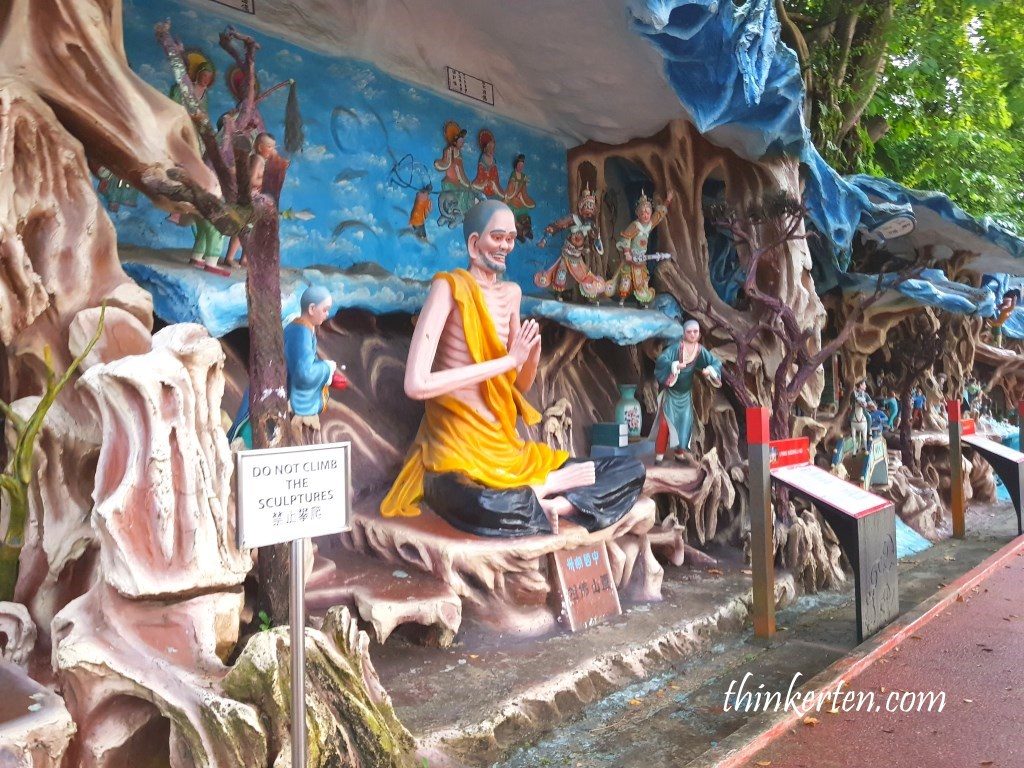 In its early years, the grounds were opened to the public, and even had a zoo. Now, no more zoo, only animal figuring scattered around the top of the hill.

It’s quite strange to see the emu carrying the turtles at the back and to see kangaroos and koala and emu in Haw Par Villa. 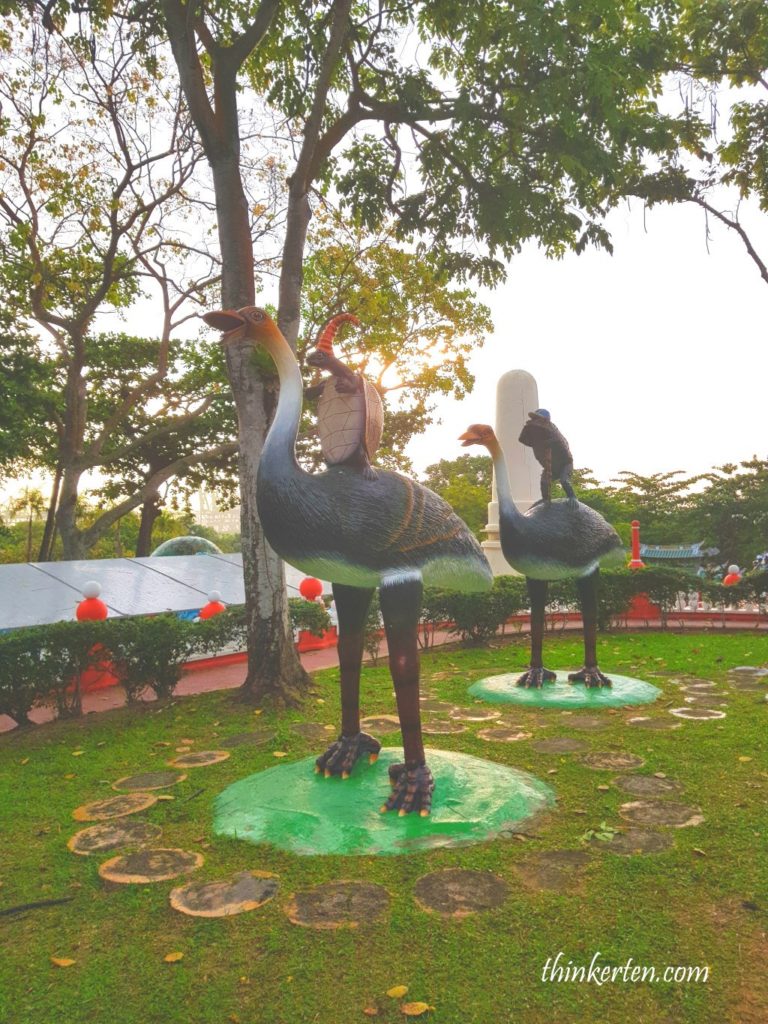 I heard about haunted stories about Haw Par Villa since I was young.  This place comes alive at night, and that the statues are actually dead humans covered in wax.  It was raining when I was there, the sky was quite gloomy but there are still people around the park.  I didn’t have any strange encounter. 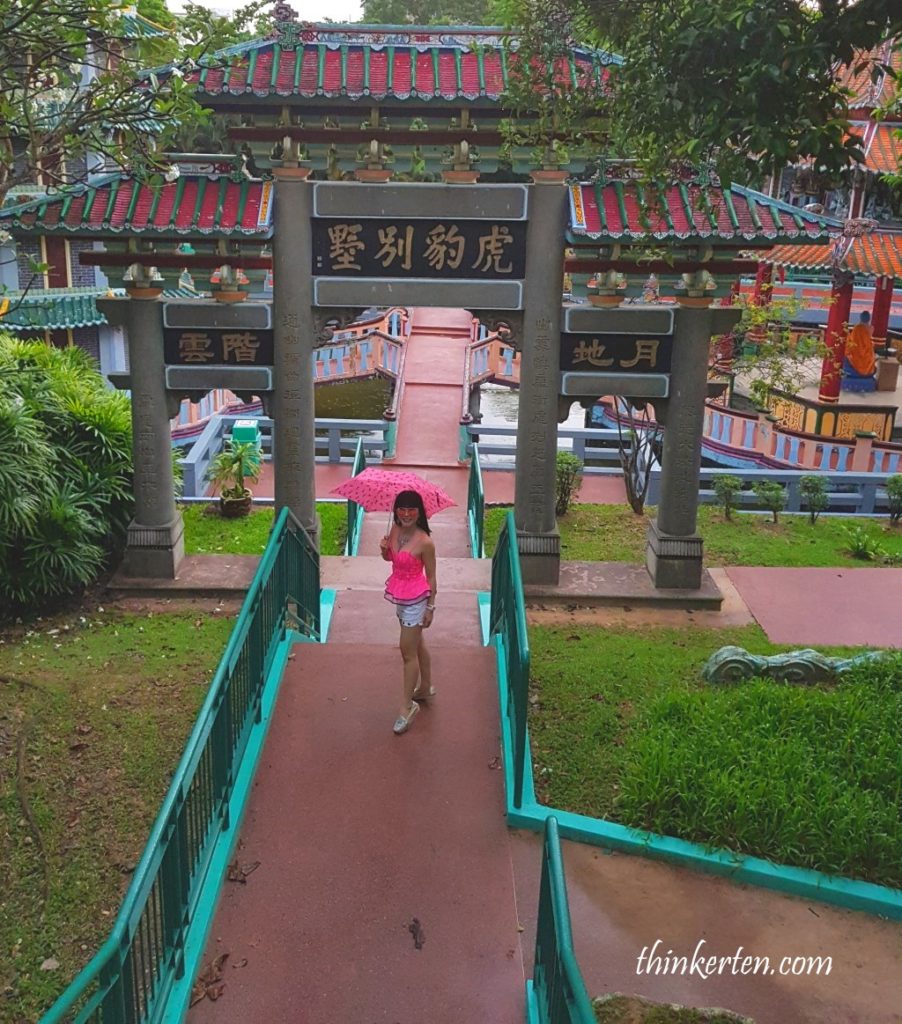 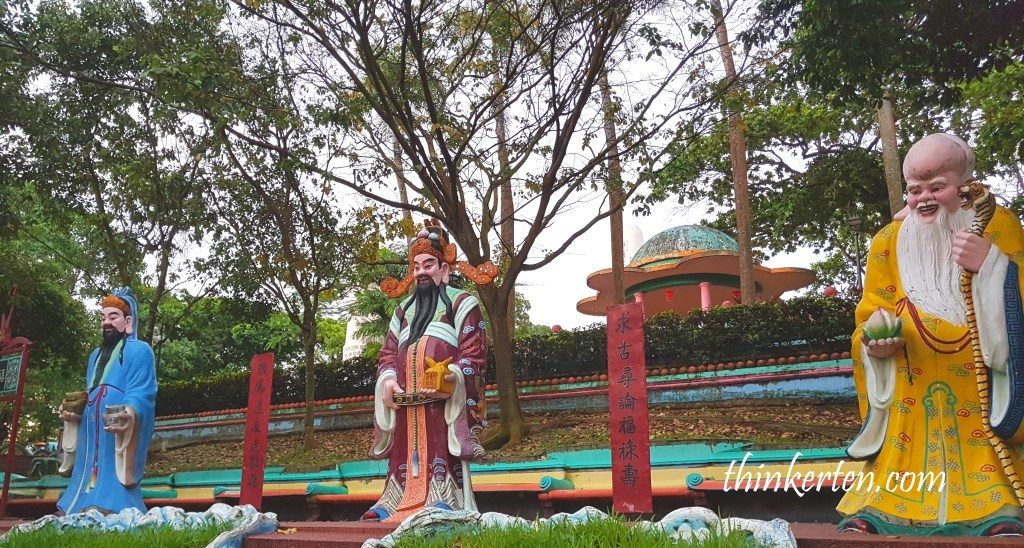 These days majority of the visitors are Indian, I saw a group of Indian visitors are resting at the pavilion while waiting for the rain to stop. 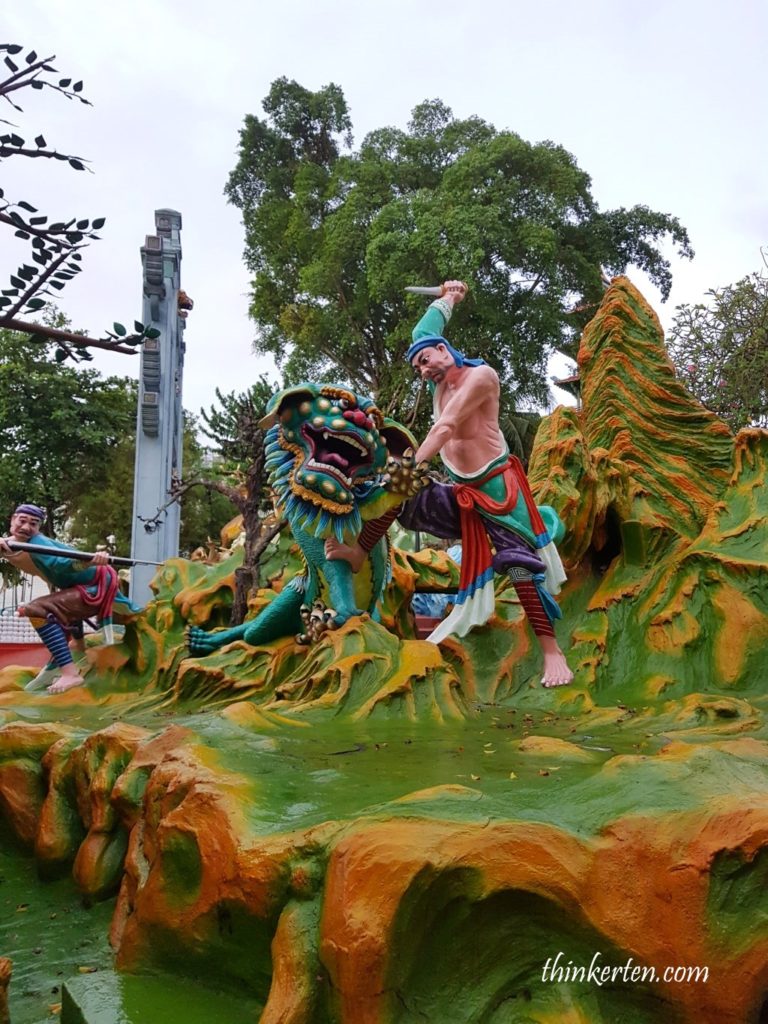 How long do you need to spend in Haw Par Villa?

Normally one hour is enough to walk around the whole park.

Who own Haw Par Villa now?

The Singapore Tourism Board took over the management of the villa. The Aw family donated the statues in the garden to the nation on the condition that the name of Haw Par and the family memorials located within the garden grounds be retained. 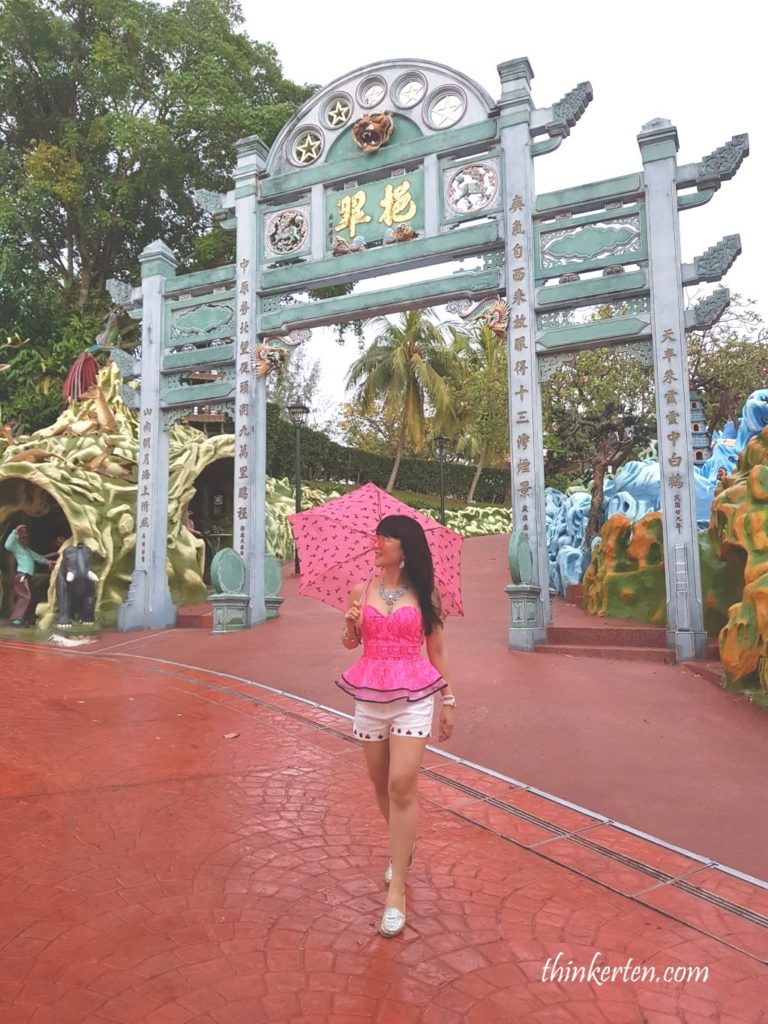 A Buddha sitting at the top of a pagoda 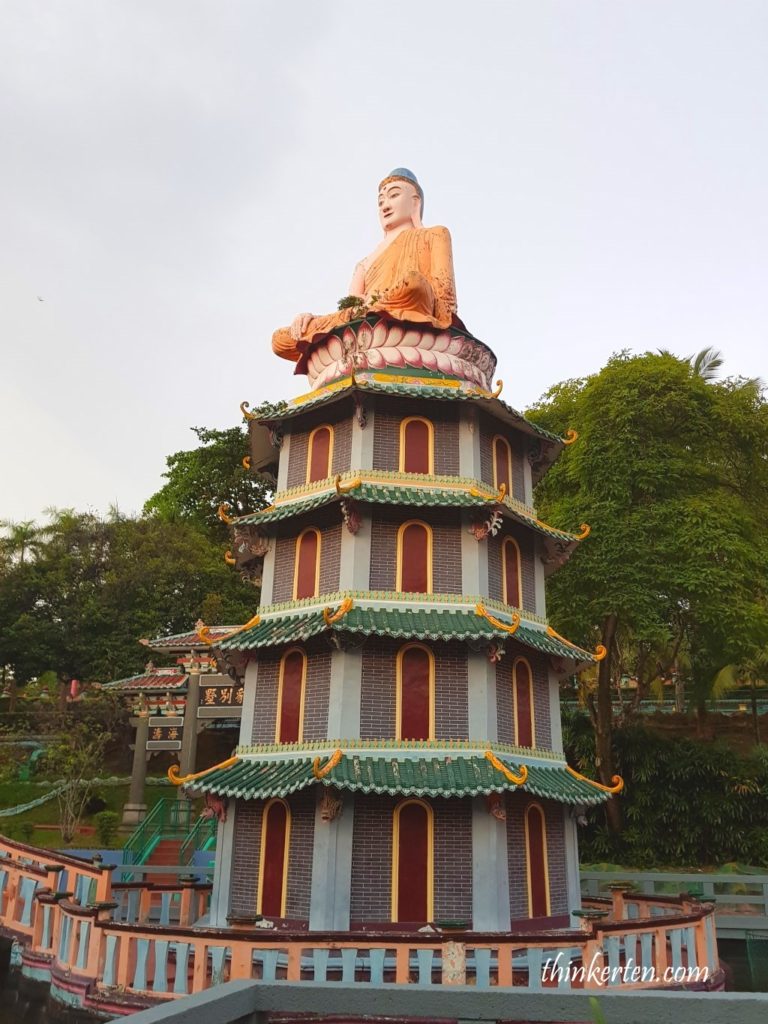 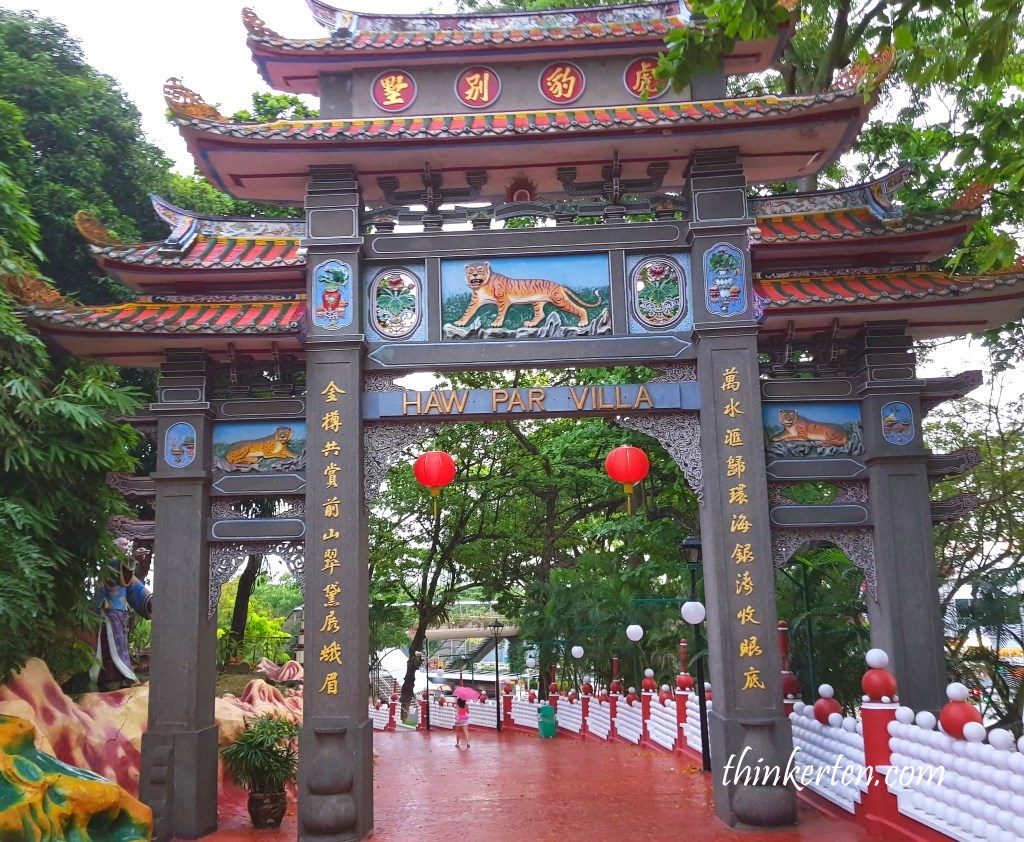 The gate has closed but not locked yet.  It was almost 7 pm and the old man was waiting patiently for all the other visitors to come out from the park.