Gloucester city is about 2 hour drive from London, about 113 miles.  We drove from Cardiff in Wales, just about an hour drive – 63 miles.  Why go Gloucester? 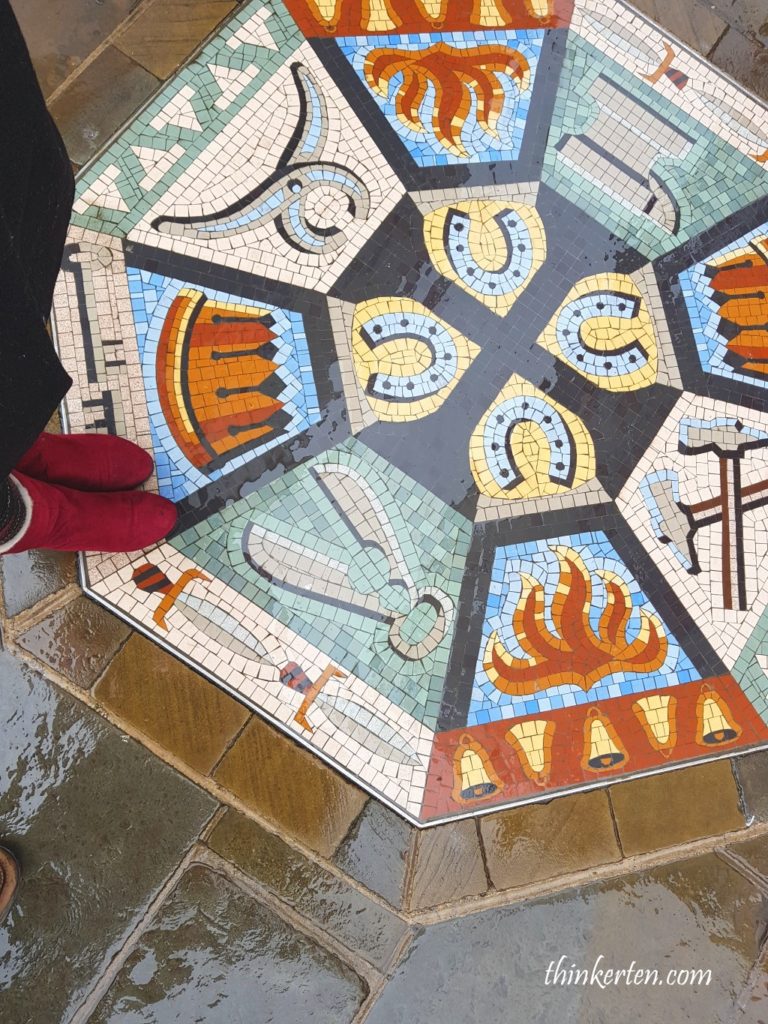 This is a pretty small and quiet town which I like it very much.  I always like smaller town as there are not many people to bomb my photos so offer better photo opportunities. 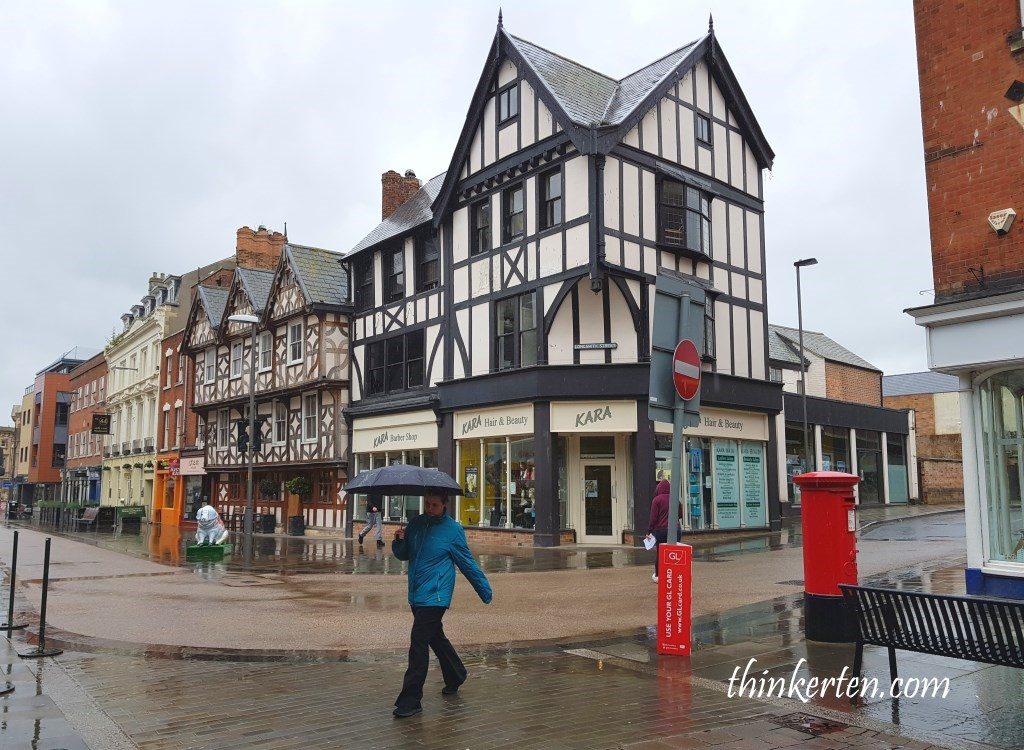 It was raining early in the morning when we arrived at Gloucester city.  The weather was quite cold even though it was summer. 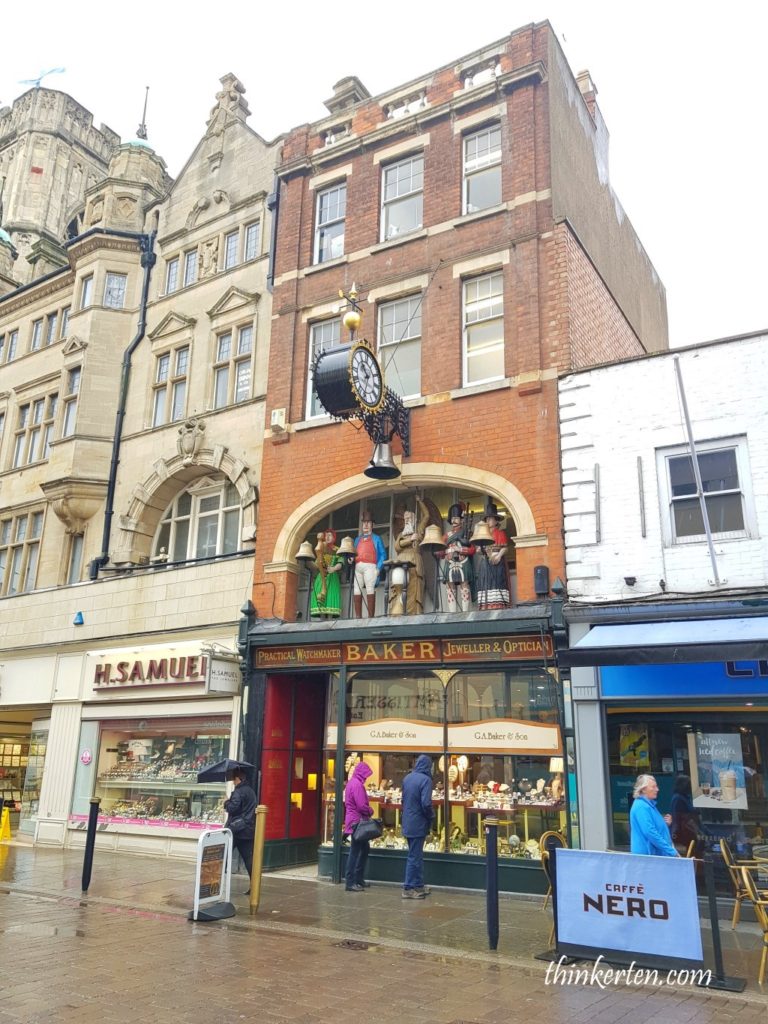 We walked around and explore every corner of the city center.  As usual, some goldsmith, pastries shops & cafe.  The cakes and pastries looks very pretty but I am not sure the taste. 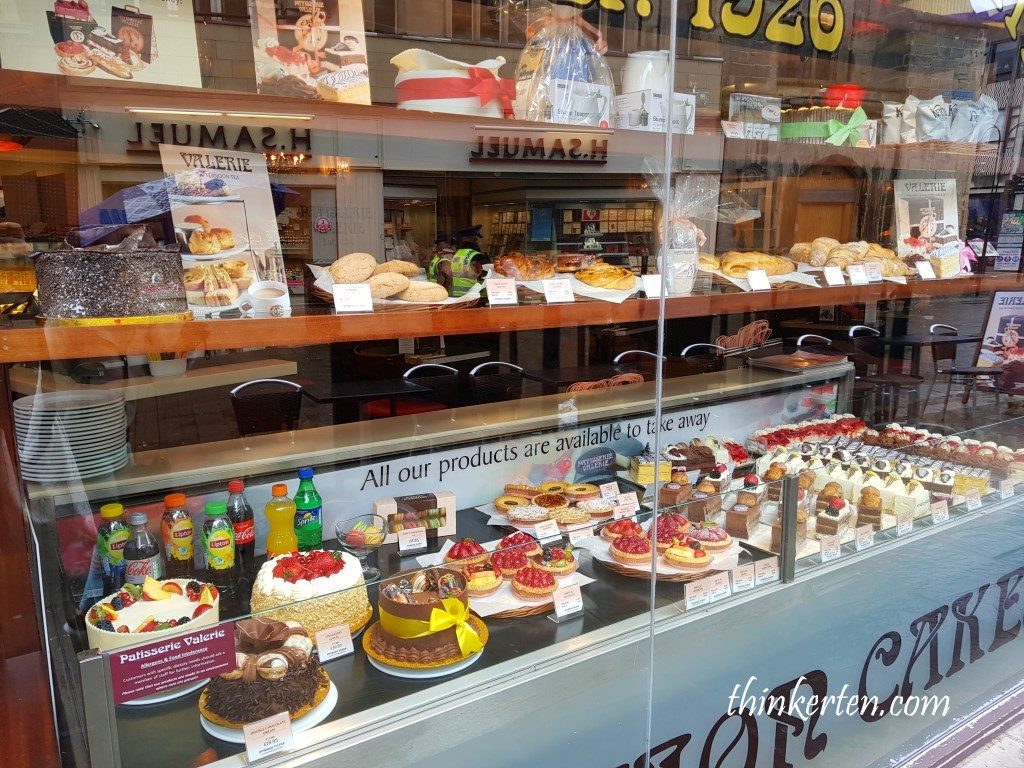 One thing which made the city unique is the pig figuring found everywhere in the whole city.  All with different design and pattern. 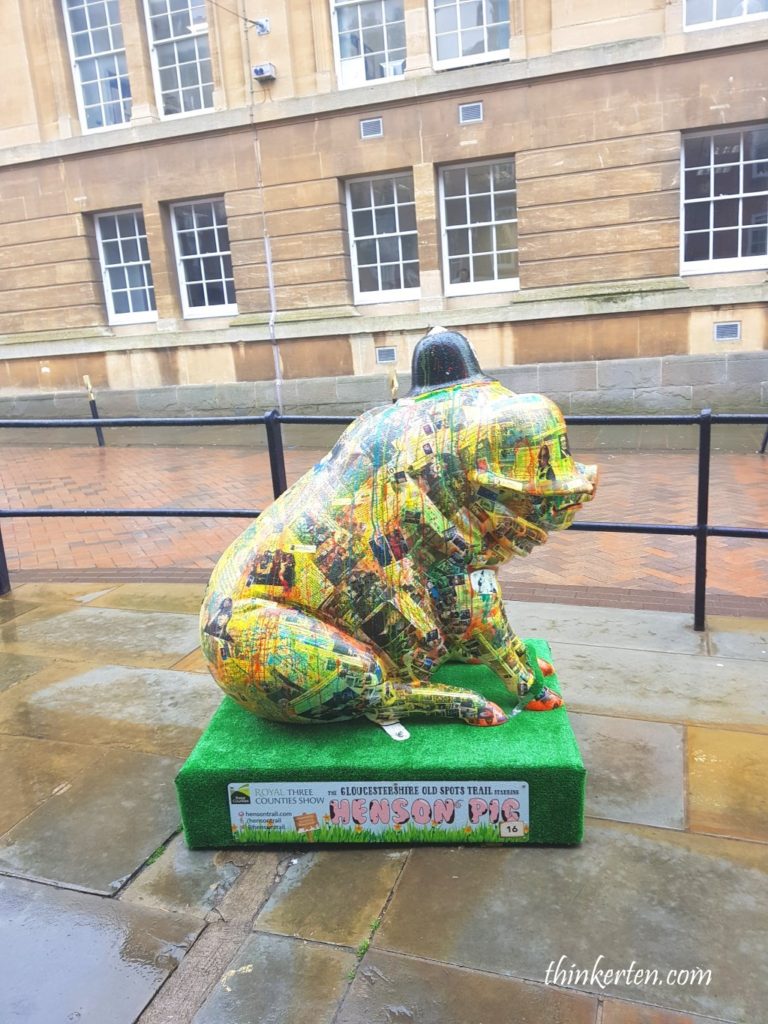 The trail of pig figures bring out the splash of colour to the streets of Gloucester.  The pig figures were there from June to Aug 2017 only to promote some sort of agricultural events.

I found at least 5 different pattern of pig figuring along the walking street. 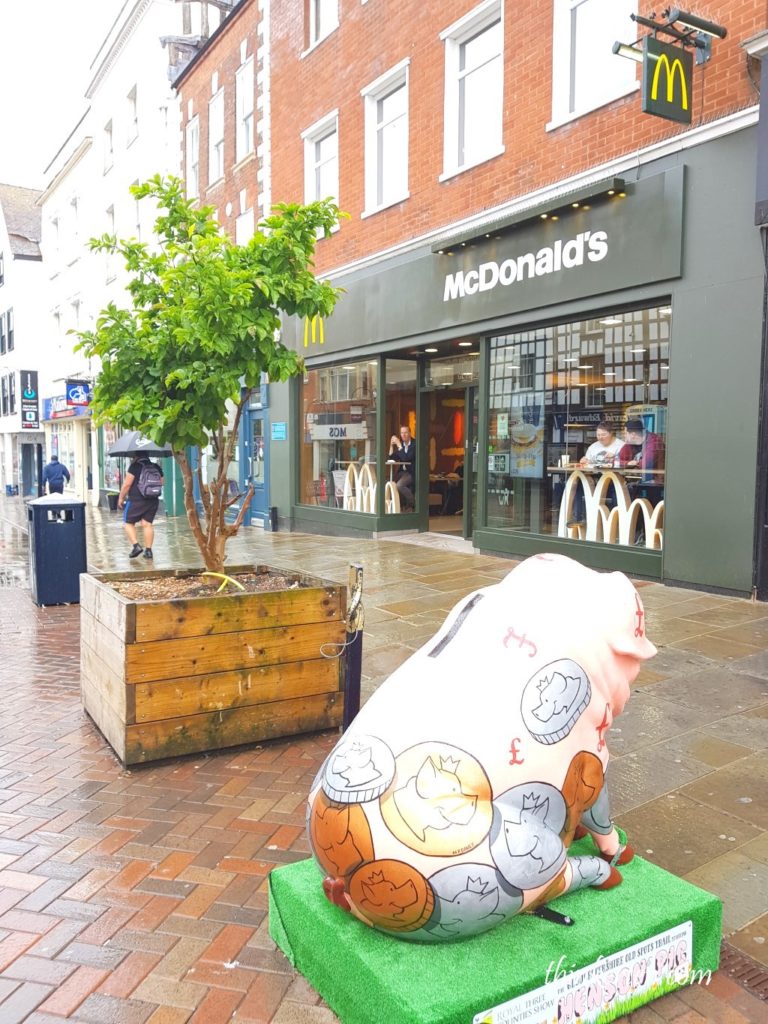 Walking into an alley to find our destination – Gloucester Cathedral. 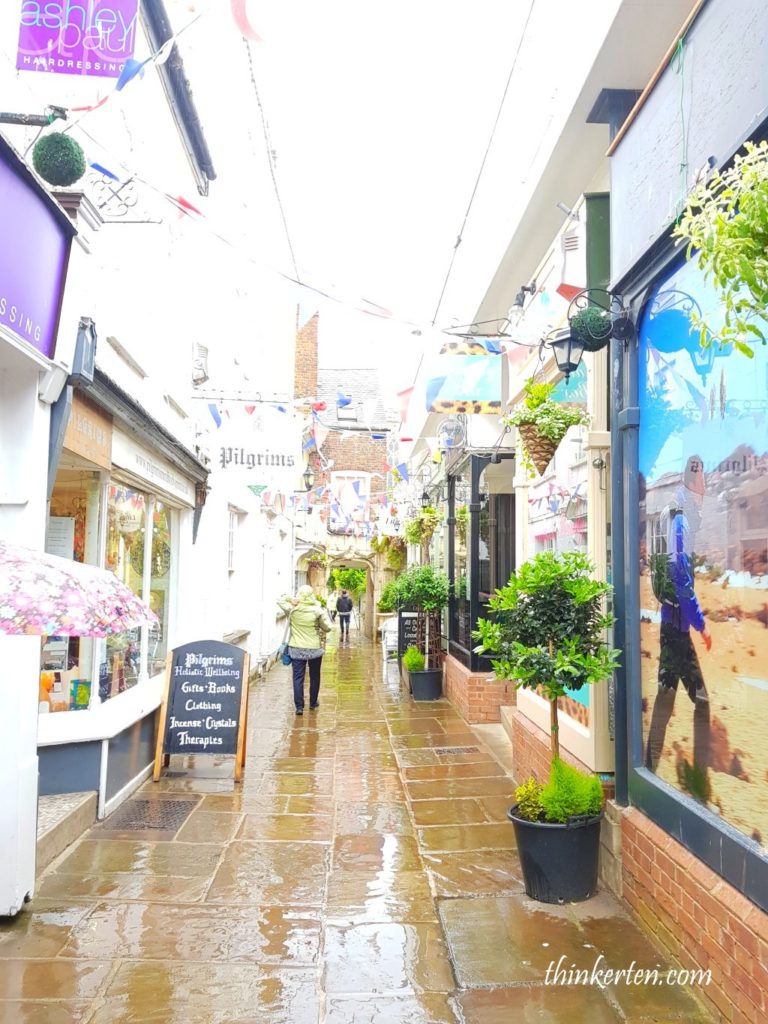 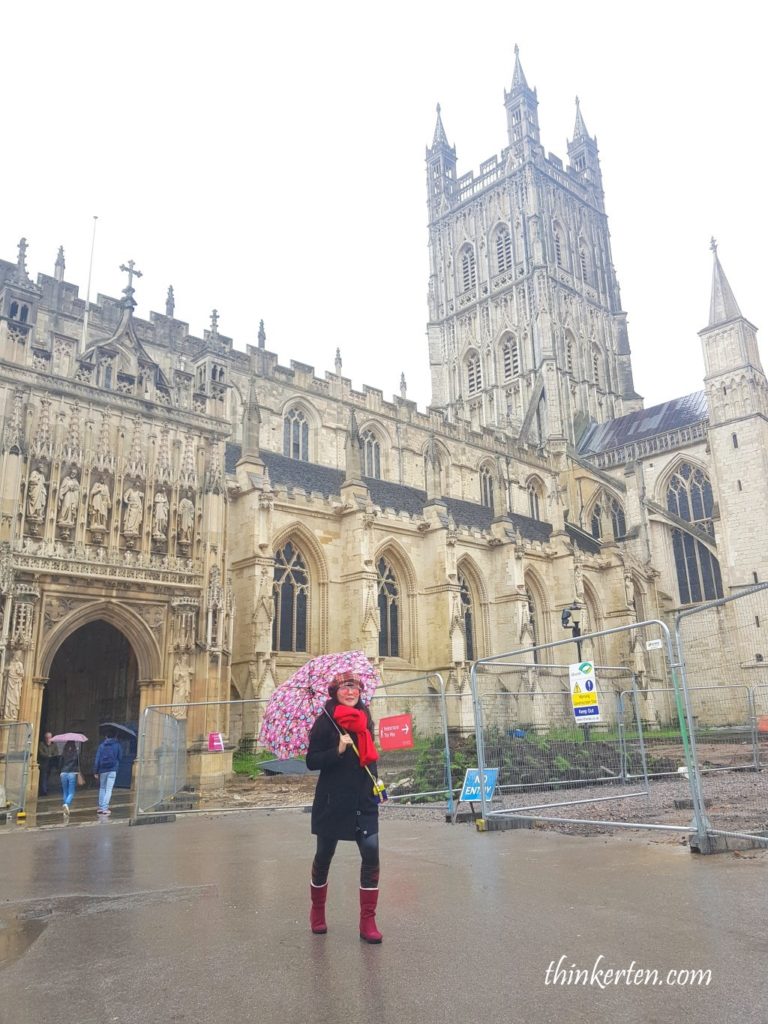 The 1,300 years old Gloucester Cathedral is really grand as it is one of the shooting place for Harry Potter.  In fact two of Harry Potter films were filming here.

Some part of the Cathedral was under renovation when we were there, so the view was not perfect.  So unlike the Salisbury Cathedral, you could not have the whole perfect and unblocked view of the whole Cathedral, this one here, a very big portion were under maintenance so not full view and many areas were restricted to enter. 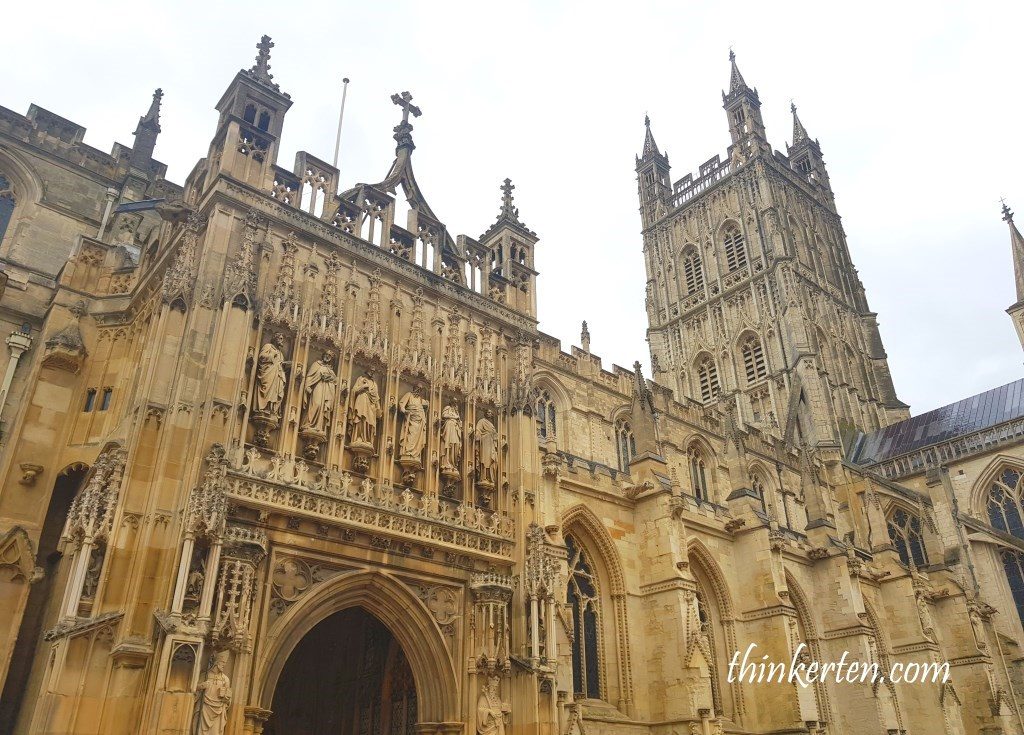 If you walked in the Cathedral you would notice this Cathedral is really ancient and many of Harry Potter scene were shooting here.  Gloucester Cathedral as Hogwarts School.  The Cathedral is open 365 days and admission is free but you are welcome to make donation 🙂  If you are a Harry Potter’s fan, come and visit. 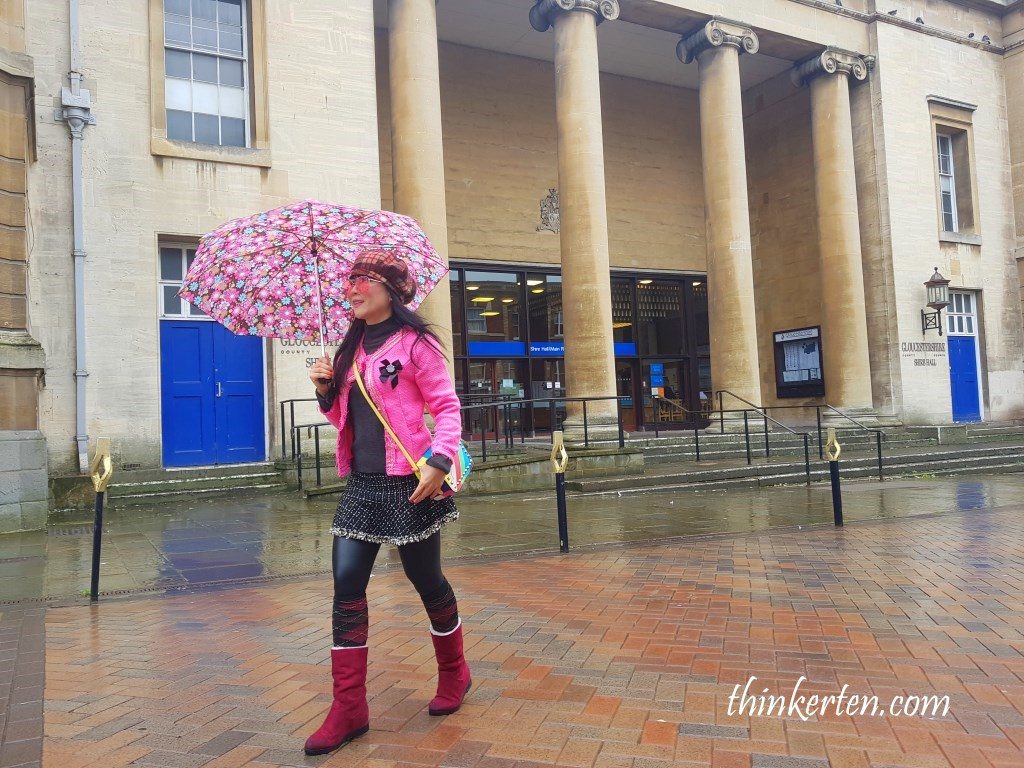 Now gone back to walking street, the big building behind me is a bank, pretty quiet as it was a raining day.  Let’s me explore more and find what to eat for lunch. 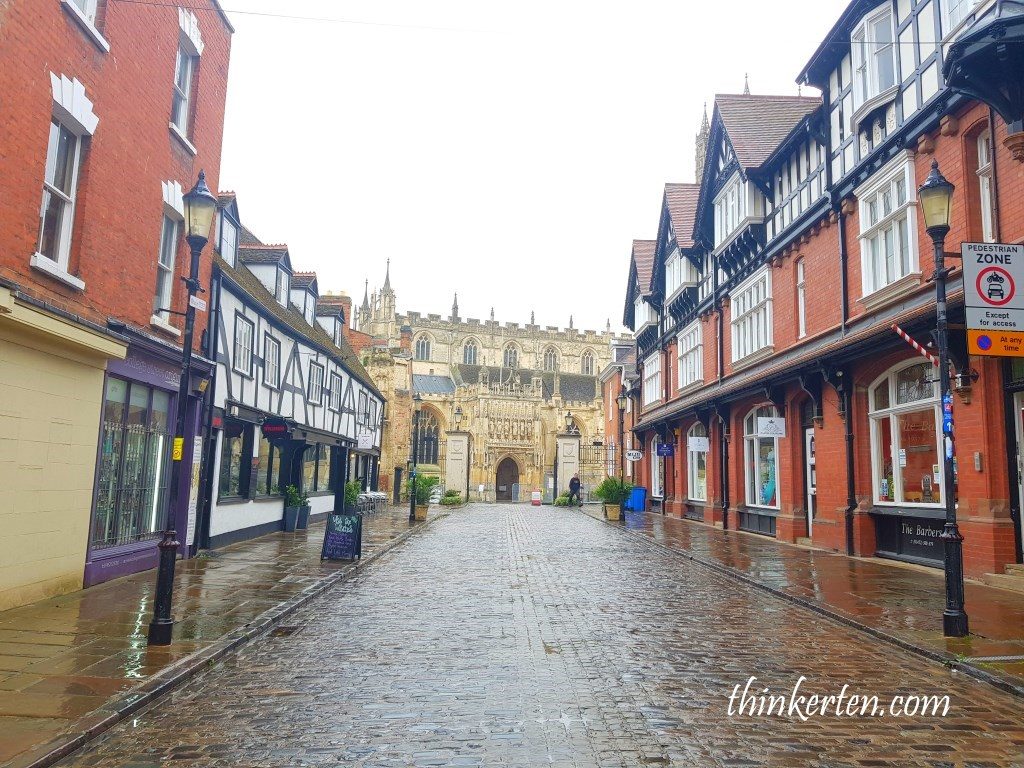 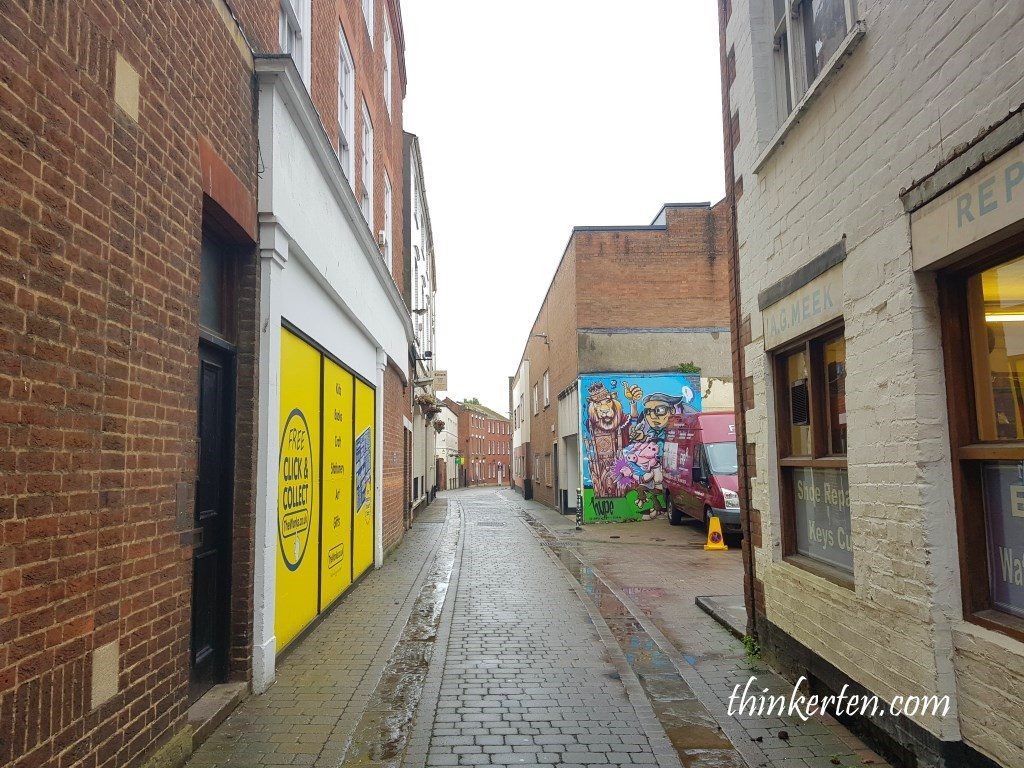 I think it was the Election Day so some guys from UKIP/Independence Party were trying to promote their party under the rain and strong wind. 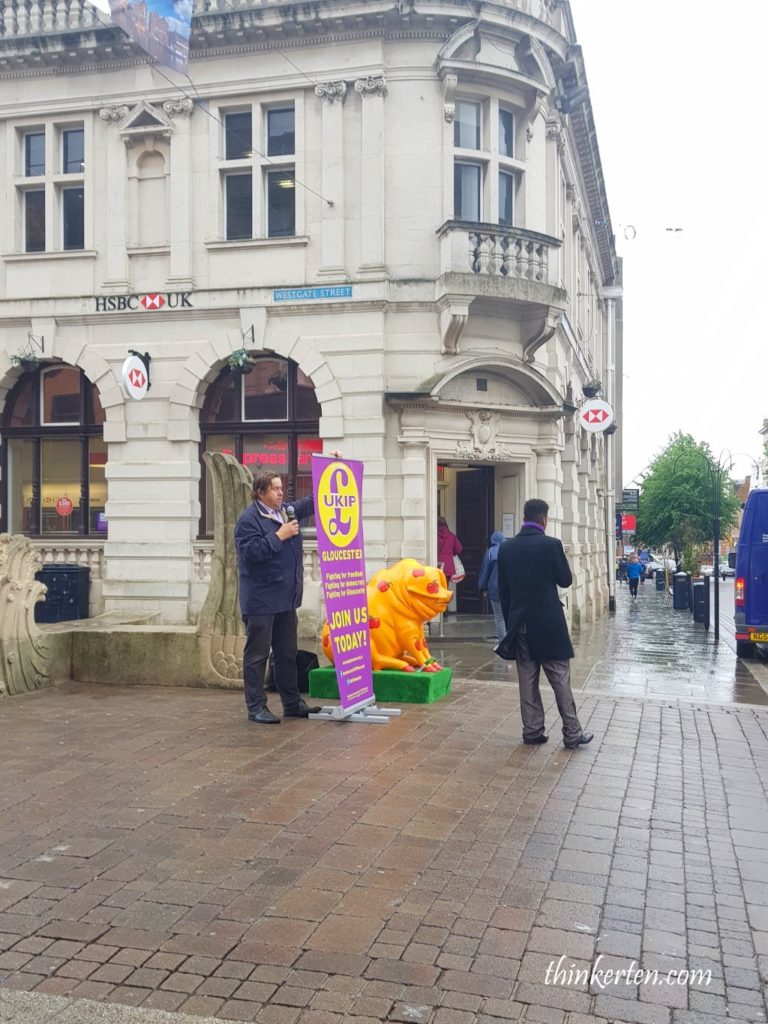 We finally decided to try out the KFC in Gloucester city, we ordered the KFC  Nashville Hot flavour, the taste is similar to tandoori chicken but I don’t find them hot at all.  There are few cucumber pickles on top. 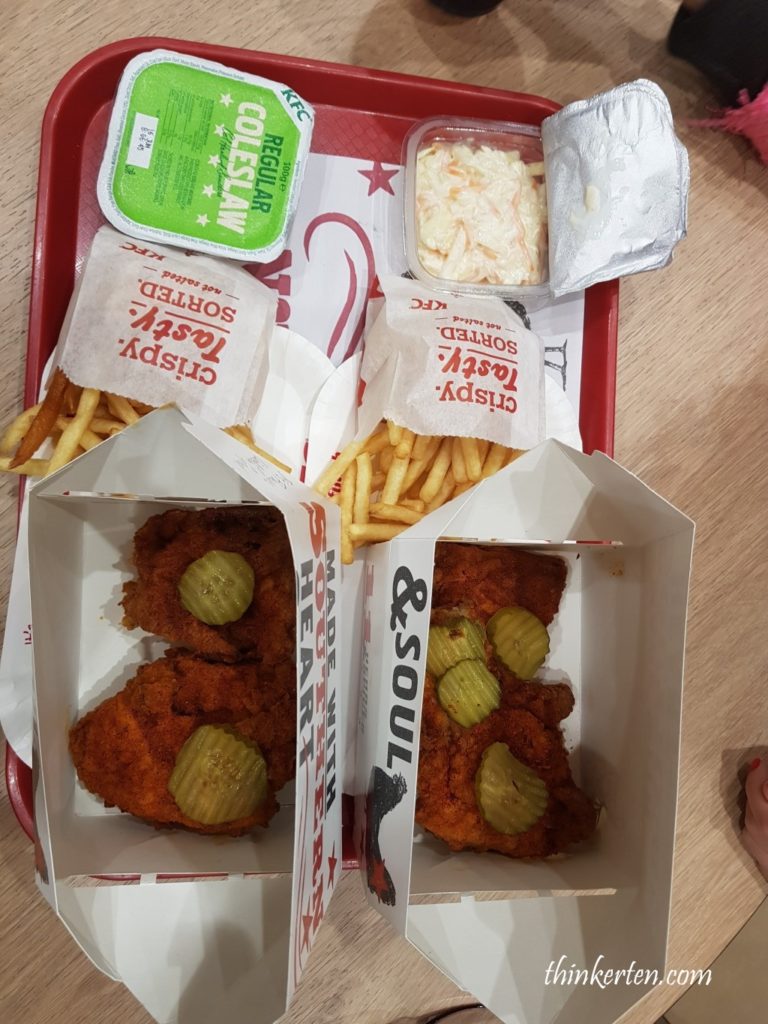 Most things sold here are used stuff but still pretty new.  We bought two books from this charity organization, each only cost GBP 1.   What a great place to recycle your stuff and give back to the charity! 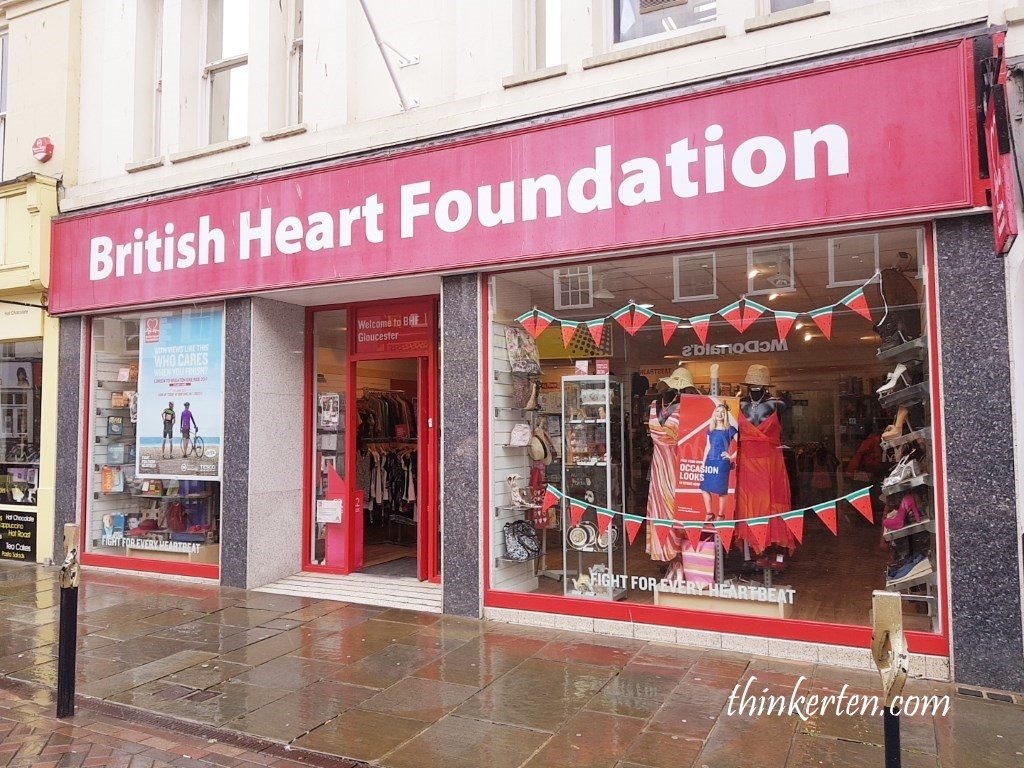 Where to Park at Gloucester ?

As usual, the car park here is Park and display.  We paid for 2 hours so we rushed back to get our car. 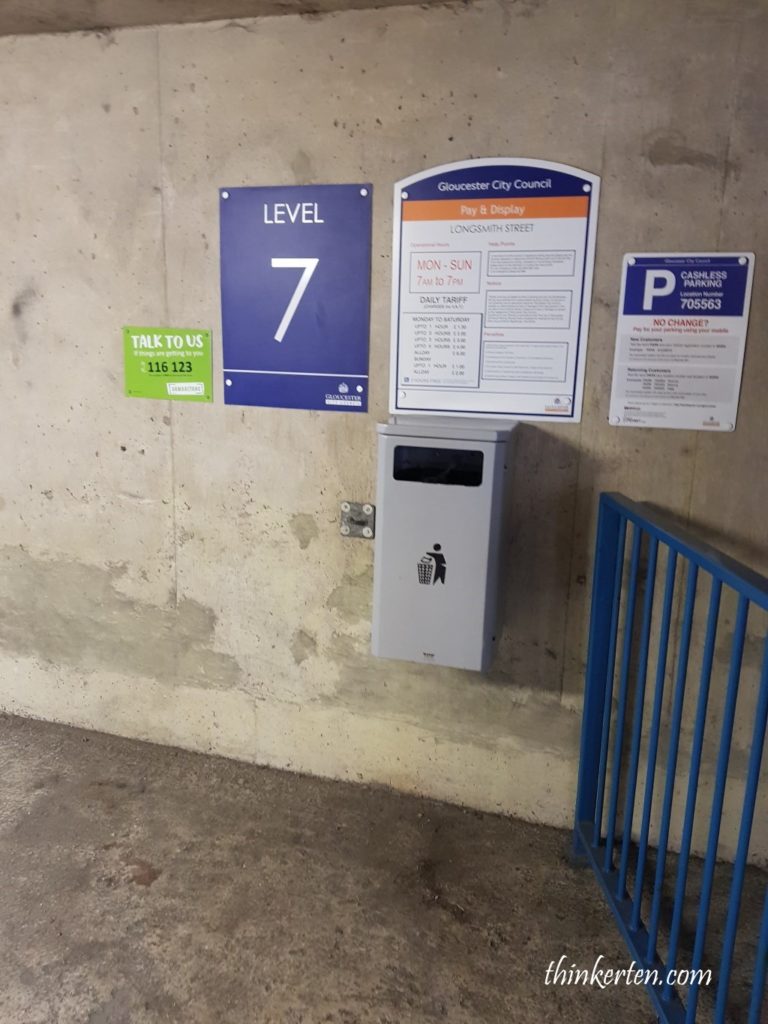 Self Drive in UK : St Fagans Museum Cardiff in Wales

Self Drive in UK : Bourton on the Water, Gloucestershire – voted as one of the prettiest village in England