Turpan in Xinjiang is one of the important cities for Ancient Silk Road. Luckily it is still able to preserve several monuments of ancient Uyghur architecture. Emin Minaret is just one of them.  We were here in the morning and luckily the crowd was not too bad yet. 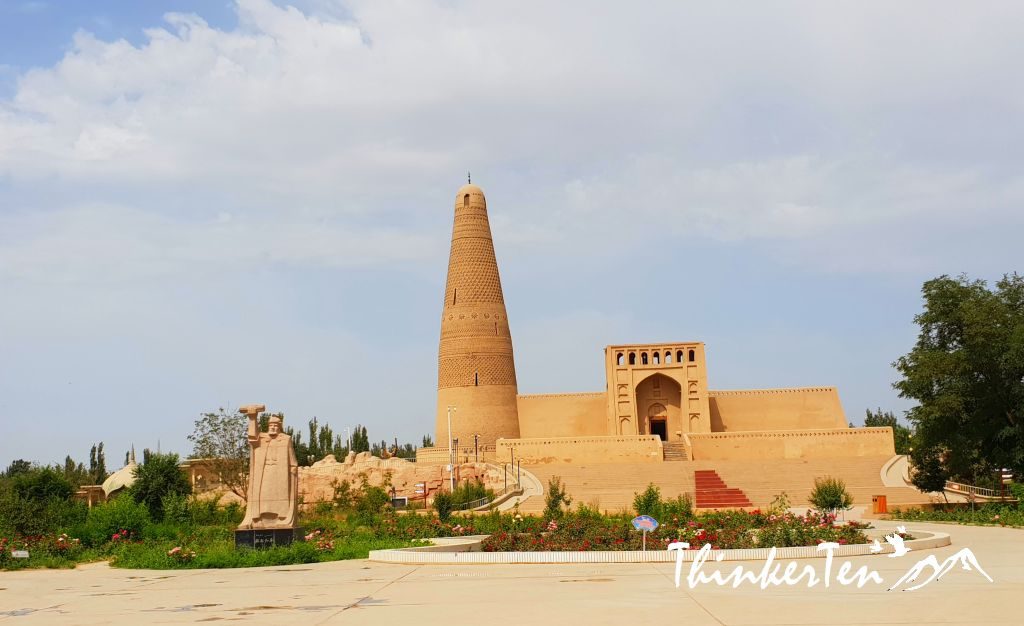 This is a very good example of an Islamic architecture, similar to Qutub Minar Delhi, Minaret in India.  Emin Minaret in Turpan is 37 m high, the body of the tower is cylindroid in shape, built with bricks arranged in different symmetrical floral pattern. Look carefully at these pattern, you will realize the unique mixture of Chinese and Islamic features at these print on the minaret.

In total, there are 14 windows to provide lights and ventilation and a spiral stairs inside which brings you to the top. However, it is no longer open to tourists to climb up to the top now. 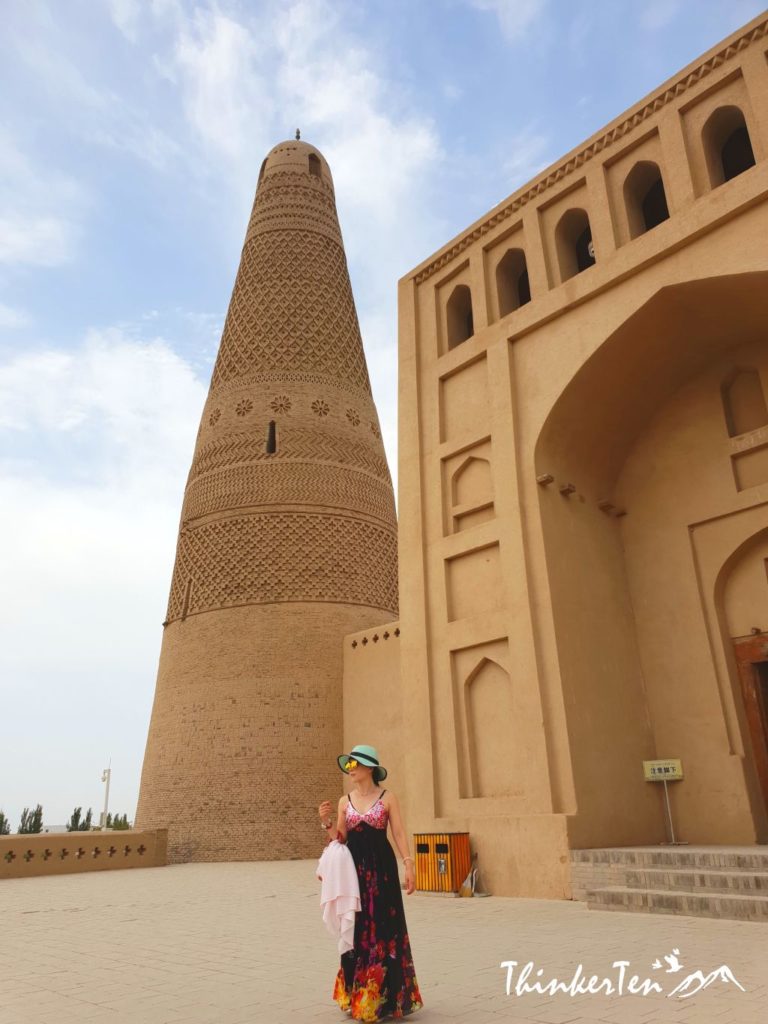 Next to the Minaret, there is a nice looking mosque – Uyghur Muslim Mosque. Uygur is one of the biggest ethnic group in Xinjiang, they are Muslims and regard themselves as culturally close to Central Asian nation. To me, Uygur people look very similar to Turkish. 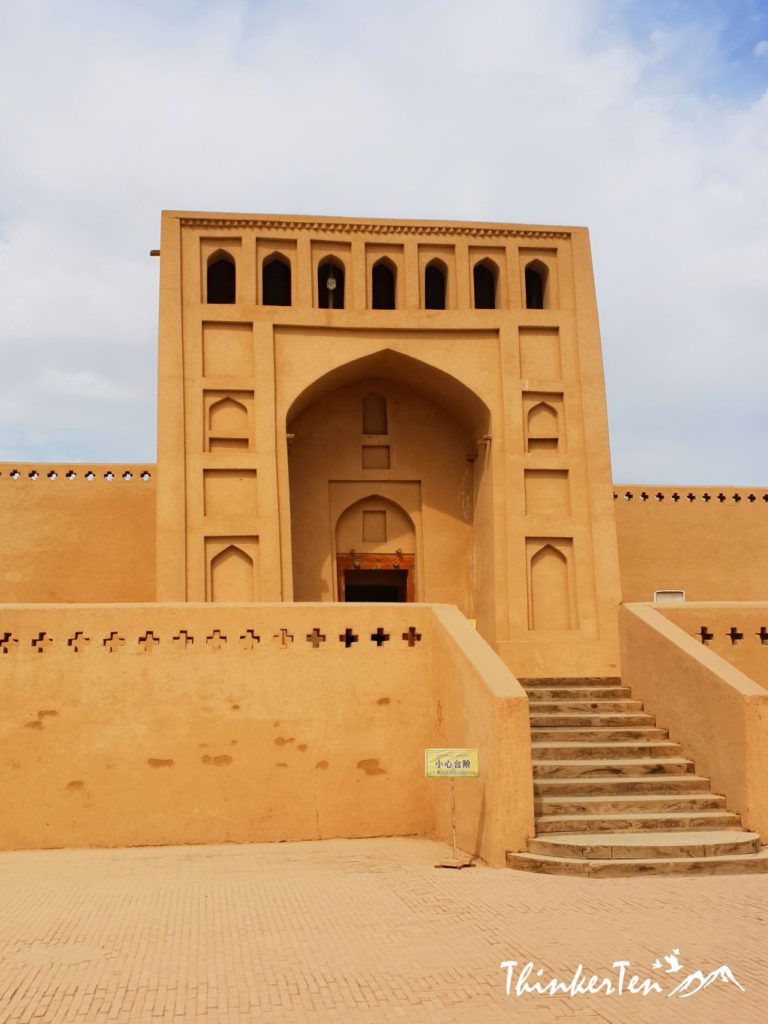 Inside the Uygur mosque, you will find rough wooden piles were used. Floor is decorated with colorful carpets to enable the Uygur Muslim to pray at the floor on Friday. 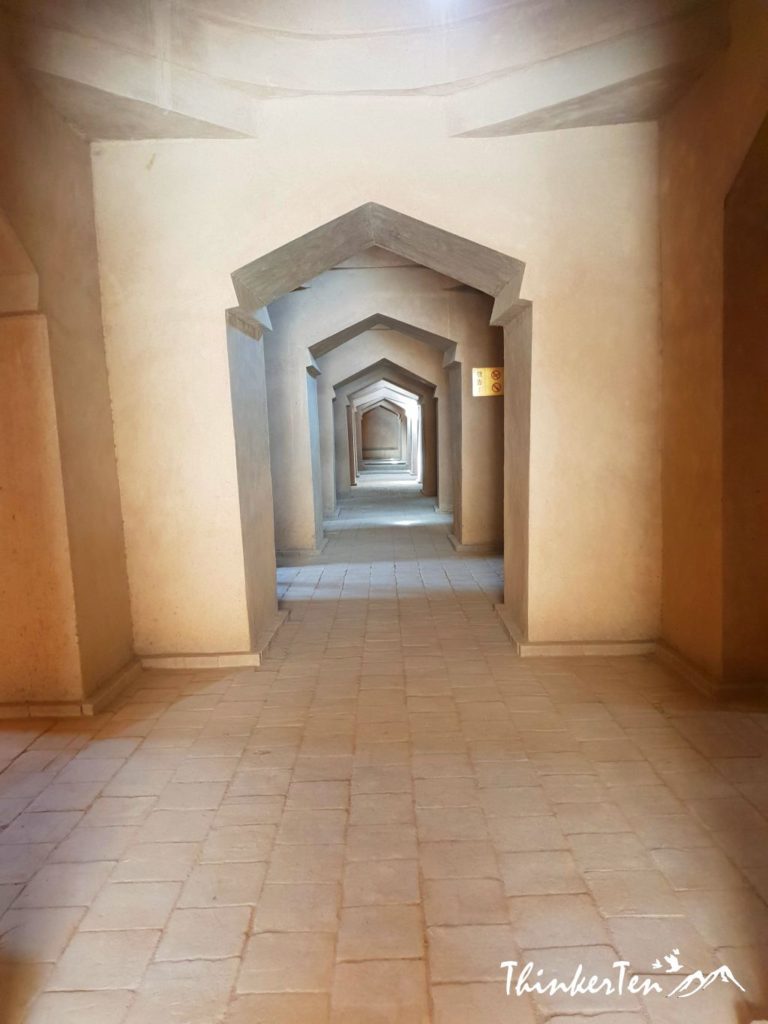 Stele with inscriptions in Uyghur and Chinese

The Emin Minaret is a blending Uyghur architecture and history with Islamic traditions. The tower is made of wood, mud and brick and also the tallest minaret in Xinjiang. I find it interesting to see the mixture of Chinese and Islamic architecture in China. Plenty of photo opportunities from all angles.

This is beautiful and I love learning all the facts about it too.

Dear Kourtnie,
Really lovely to see Emin Minarets which shows sign of presence of Islam in the architecture. The minaret is the most distinctive feature of the mosque!

Absolutely stunning! One day I’d love to travel the Silk Road. It’s so full of beauty and history.

This ancient network of trade routes which connected the east and west certainly worth a visit to see the cultural interaction between the regions for many hundred of years.

Thanks for sharing. I would have love to see pictures of the Uygur people!

Dear Mamainheels,
Thanks for your comment. Uyghurs are a Turkic ethnic group similar to Central Eurasia. There are one of the largest ethnic groups in Xinjiang China. They have very sharp features and very outstanding look.

Wow what an incredible place to visit! Great pics, thanks for sharing.

This looks like such a fascinating and truly beautiful place to visit! I am intrigued by your beautiful photographs!

Thanks for sharing details of your trip with us. I am really interested in visiting China one day and this place will definitely be on my list.

So friggin’ cool and such a culture shock! I want to go so badly!

This trip looked so extremely fun. Loved the pictures.

This looks so beautiful and totally Instagrammable! Pinning this to my travel bucket list!

How beautiful!! I’d absolutely love to travel there one day! Probably when my kiddos are a little older, so they can appreciate it!

Wow, what an awesome place to go and visit! I bet you had a real blast!

Now that is the place to be! I would really enjoy something like this!

Coming from Muslim family I love islamic architecture, it still makes me feel it as the most balanced and beautiful building I have ever seen. Thank you for sharing this new part of your adventures, I am always thrilled to read your reports.

What an incredible site to visit! I would love to go here – unfortunately I’ve not had the opportunity yet, but fingers crossed one day soon x

This place looks so full of great architecture and culture. I bet it was so amazing to experience first hand!

What an interesting blend of two distinct cultures and styles. I always enjoy reading your posts because you share so many things that fly under the radar for Westerners – thank you for sharing these treasures!

I can’t believe that tower is so old, yet it still stands strong. Lovely photos as usual. Good tip on going in the morning to avoid crowd.

The inner part of the Minaret is not looking good as the wooden stairs are no longer open to the public to go up due to safety issue. I guess they have done a lot of work for the outer part though 🙂

I love the mixture of Chinese and Islamic agriculture and that a place that is so rich in history can be preserved . I also am in love with the decor it is so colorful. I am sure visiting here would be a great adventure .

I too was quite impressed how well this place is maintained after so many years. 🙂

so interesting to see muslim architecture in china! I did a homestay with a family in Beijing and lived right near the Uyghur area and ate their often. such an interesting juxtaposition with traditional Chinese culture!

I heard there are some Ugyhurs community living in Beijing as street fruit seller (melon) and some as officials, some students and some work as profesional.
Glad you have encountered Uyghury’s district in Beijing and I am sure you have been exposed to their culture and custom 🙂 Pretty interesing and big contrast with the Han chinese right 🙂

It’s such a beautiful combination of Chinese and Islamic architecture. Simple and still so beautiful. I have added your Silk road trip to my bucket list.

Dear Devendra,
I guess the combination of Chinese and Islamic architecture make it special and only in Xinjiang China.

Amalgams of different cultures is so fascinating.I love visiting places which have stories too.