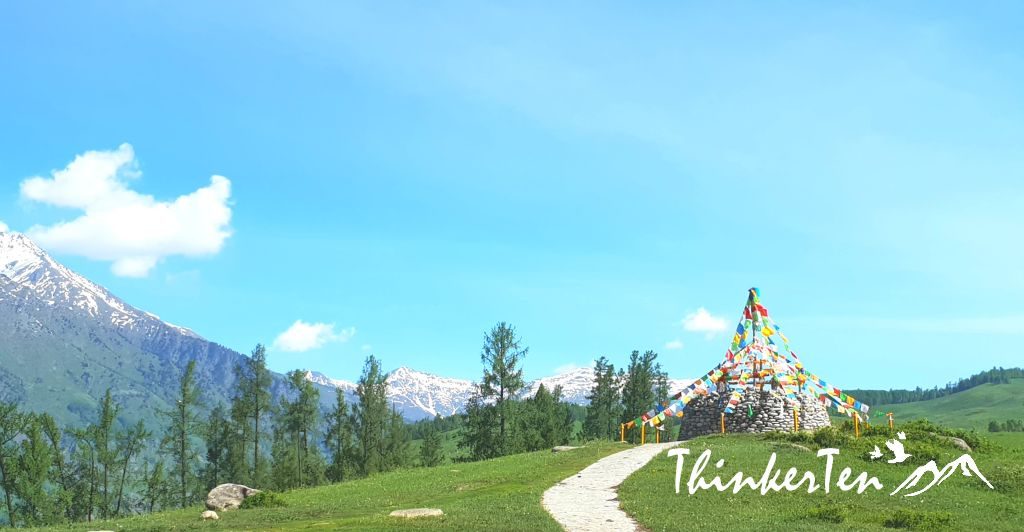 As I mentioned you need at least two days in Kanas Lake, the following day we visited Hemu Village which is located on the south bank of Kanas Lake.  Hemu Village is where Tuwa minority lives.  The Tuwa minority are believed to be the descendant of Genhis Khan Troop. It’s said that the Tuwas were originated from the old or wounded soldiers abandoned by Genghis Khan when he led his people to conquer the West Region. So you will see Tuwan home boast a portrait of the great Mongolian warlord – Genghis Khan above their fireplace. 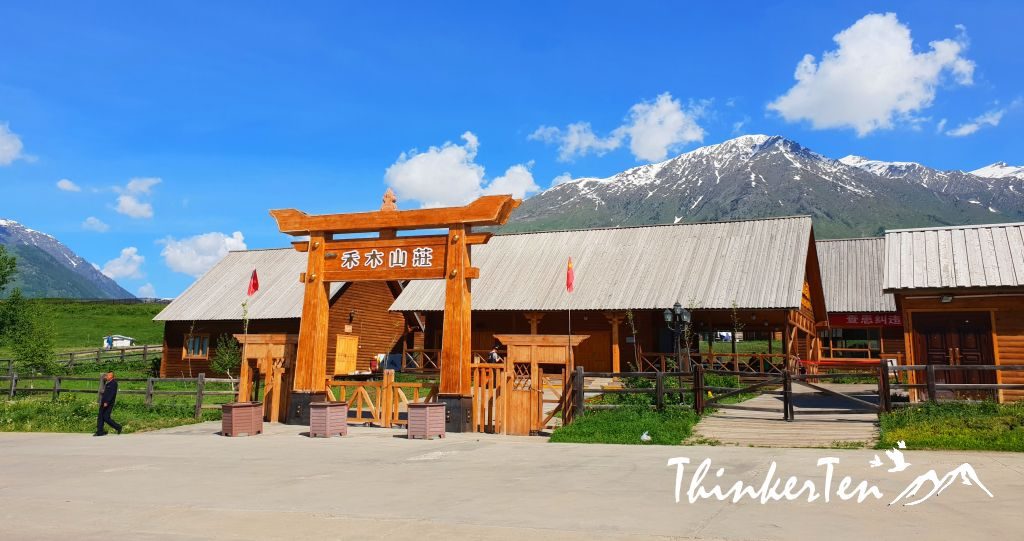 The Hemu village is really inhabited by locals and not fake old town built to attract tourists. Over here you are able to meet the remaining 2000 Tuwan people. Yes, there are only 2,000 remaining Tuwan left in this China. The Tuwan are indigenous people of Siberia/Central Asia and speak Tuwan, a Turkic language. However they also regarded as Mongolian. 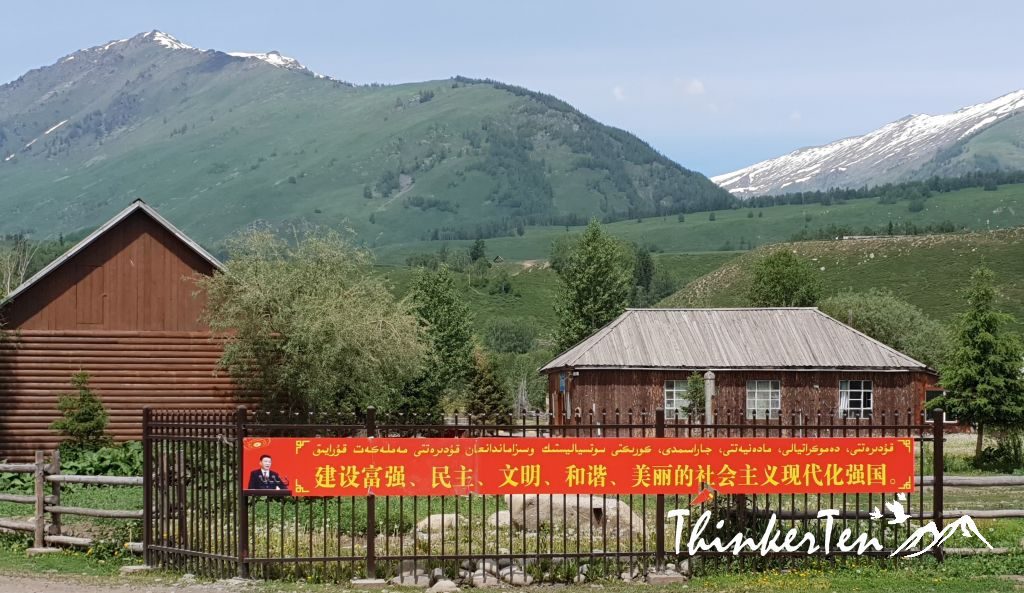 In the village you also notice Chinese propaganda everywhere.  I spotted at least three of them. The propaganda are written in both Chinese and the arabic language.

The wooden toilet in the village. 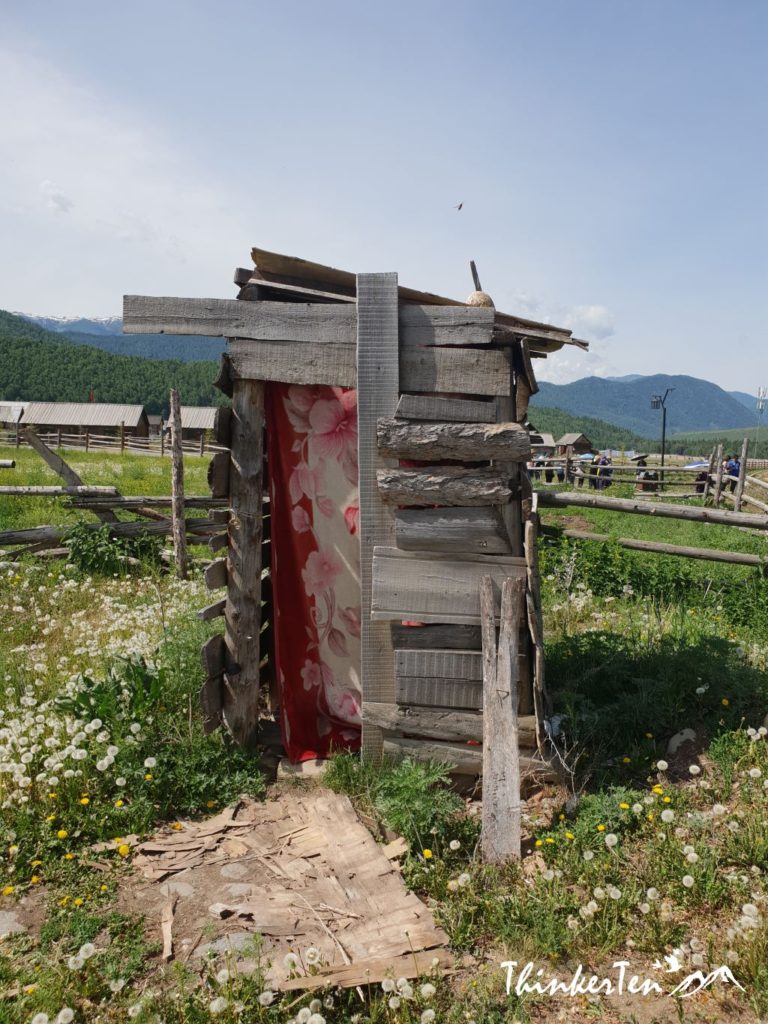 Milk Tea is Salty not Sweet!

First we went for a house visit, having some tea and snacks in the wooden cabin.  The milk tea tasted salty instead of sweet as they use salt and not sugar to serve tea. (Same like the Mongolian) The snacks served are raisin, cheese curds, barley and some lollies.

No Vegetable for Nomadic

According to our tour guide, originally the Tuwan/Mongolian do not eat vegetable and fruits.  They think only the animals eat grass / vegetables.  They considered themselves as human so they should just eat meat, such as mutton and beef and not vegetables.  But now they have included vegetable into their diet due to health benefits. 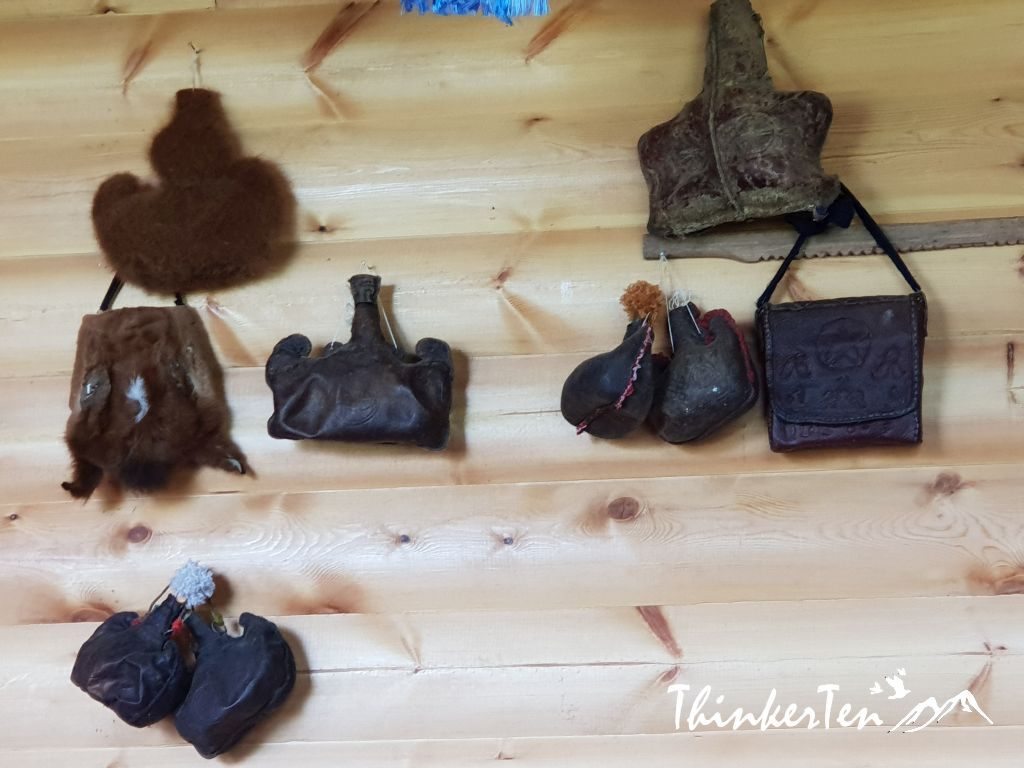 Check out the Icon  – Wooden Ski, first in the World.

Inside the little cabin you will notice the whole walls are decorated with things made from animals skin.  One of the iconic thing you should look out for is the wooden ski. According to archaeological discoveries, the first man who used skies is from these mountains in Altay region. Skiing was used to hunt and it spread all over the world. Not sure who created the ski tools first but they claimed they are the first. Anyway, I have a good look at the ski tools and found that these are made of wood and covered with a layer of animal fur skin at the bottom of the ski. Now they are still using such wooden ski during winter. Pretty cool. 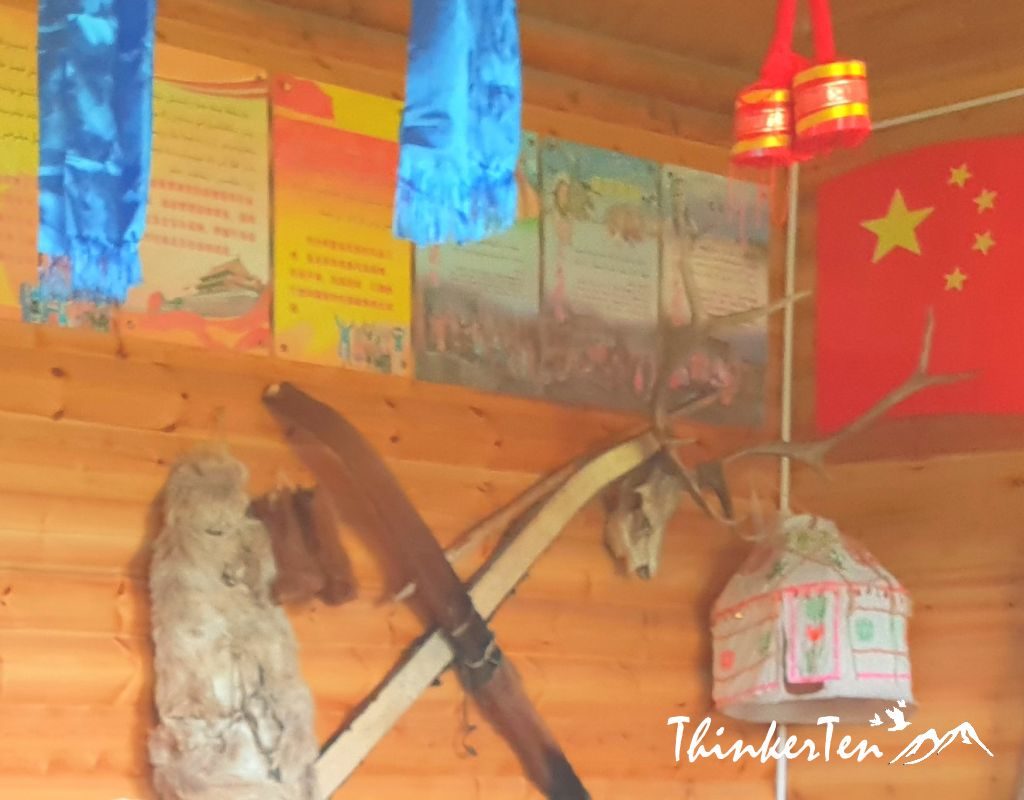 We were really enjoyed with the unique way of singing by the Tuwan.

The houses in Hemu Village are all made of logs, full of original taste, and are most concentrated living place of the Tuwa people in China. It is the farthest and largest village among the only remaining Tuwa villages (Hemu Village, Kanas Village and Baihaba Village).  Some part of the residents’ homes now are basically changed to supermarkets, accommodations, and restaurants for travelers. 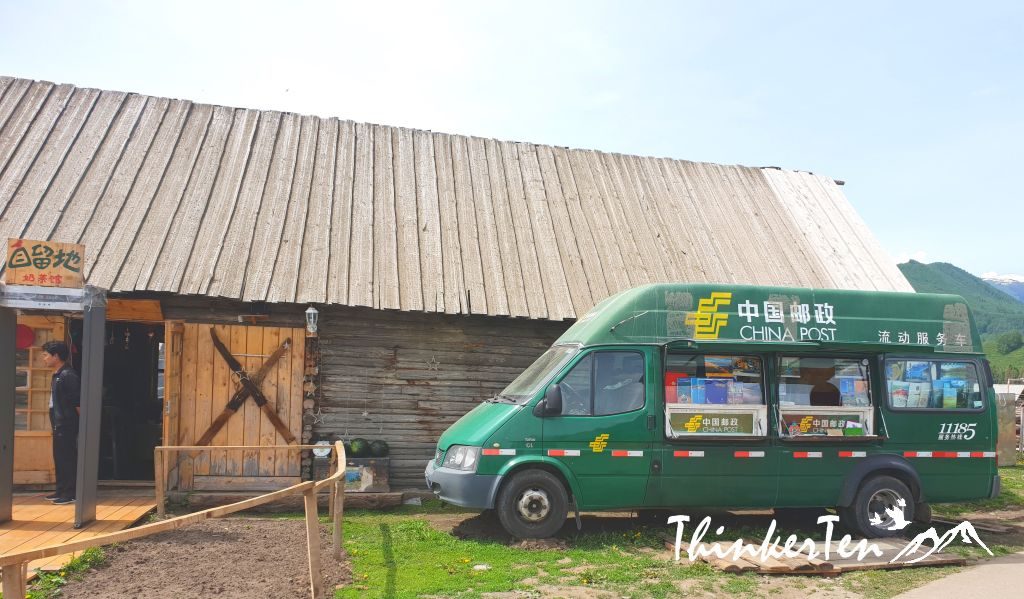 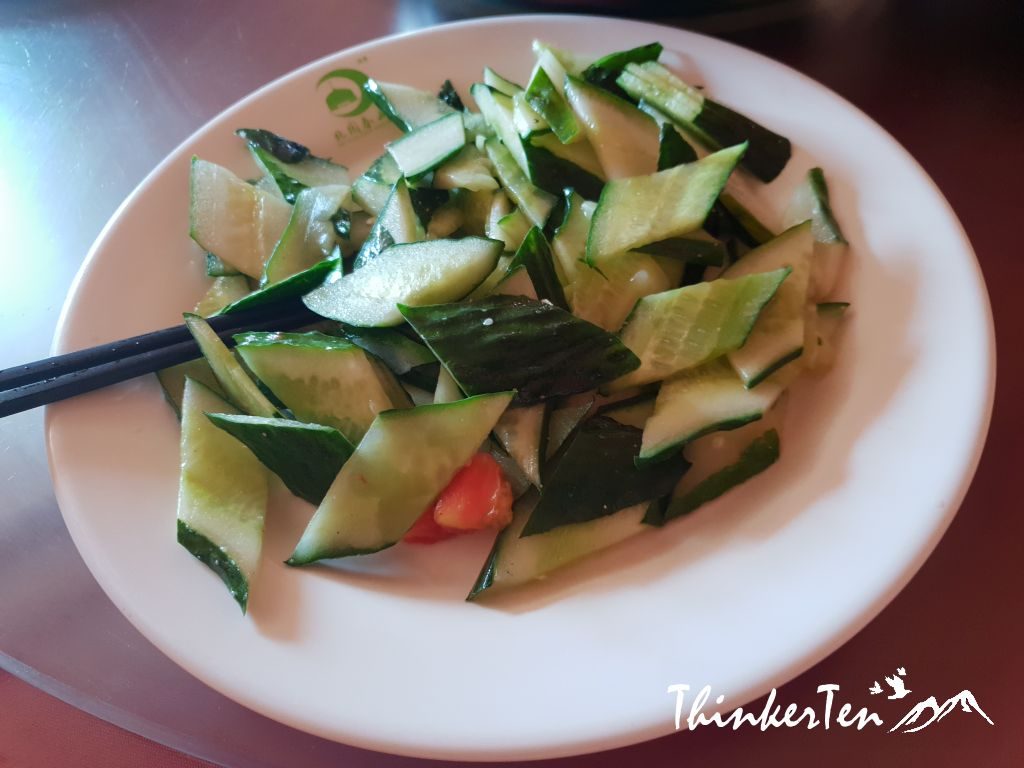 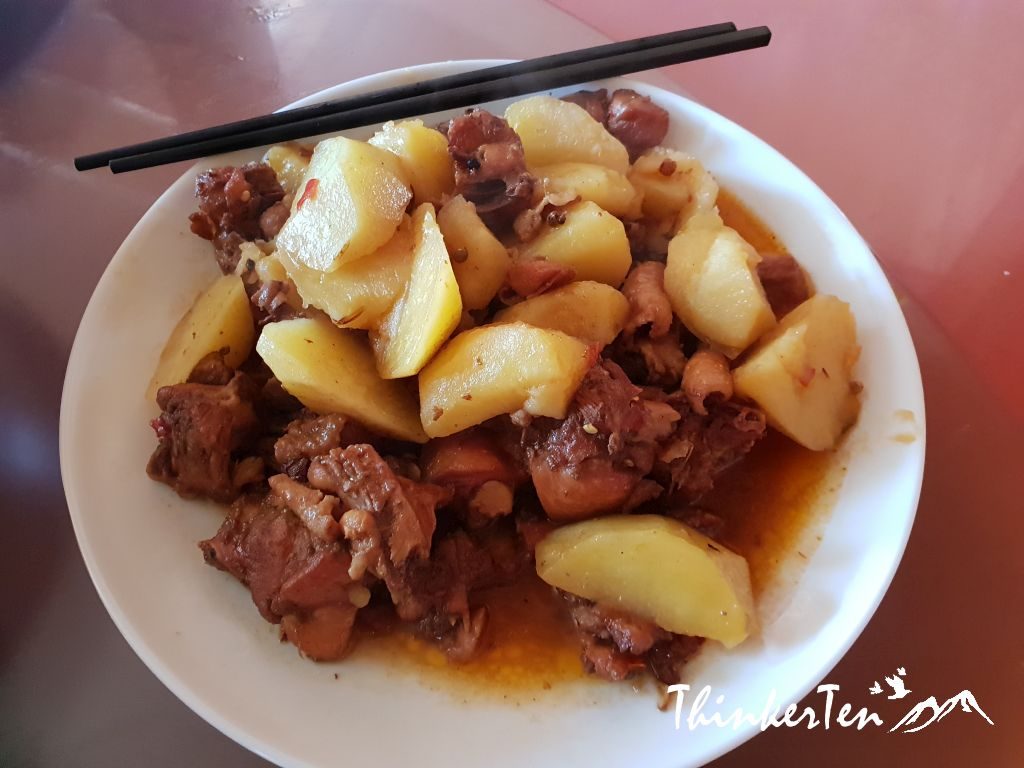 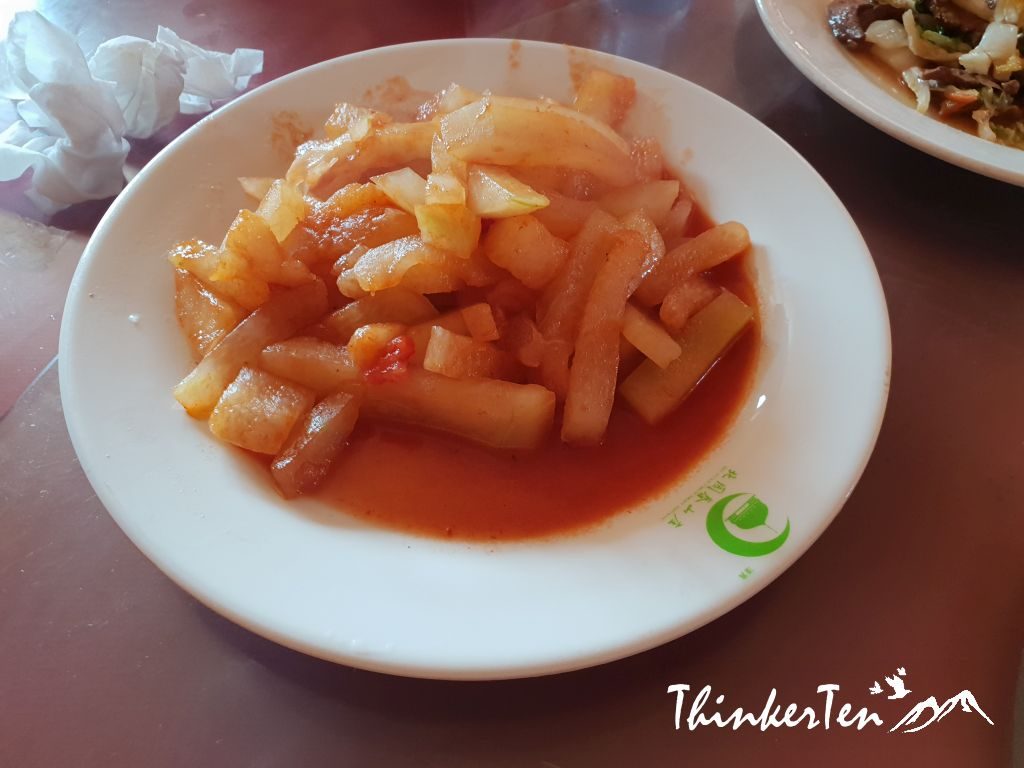 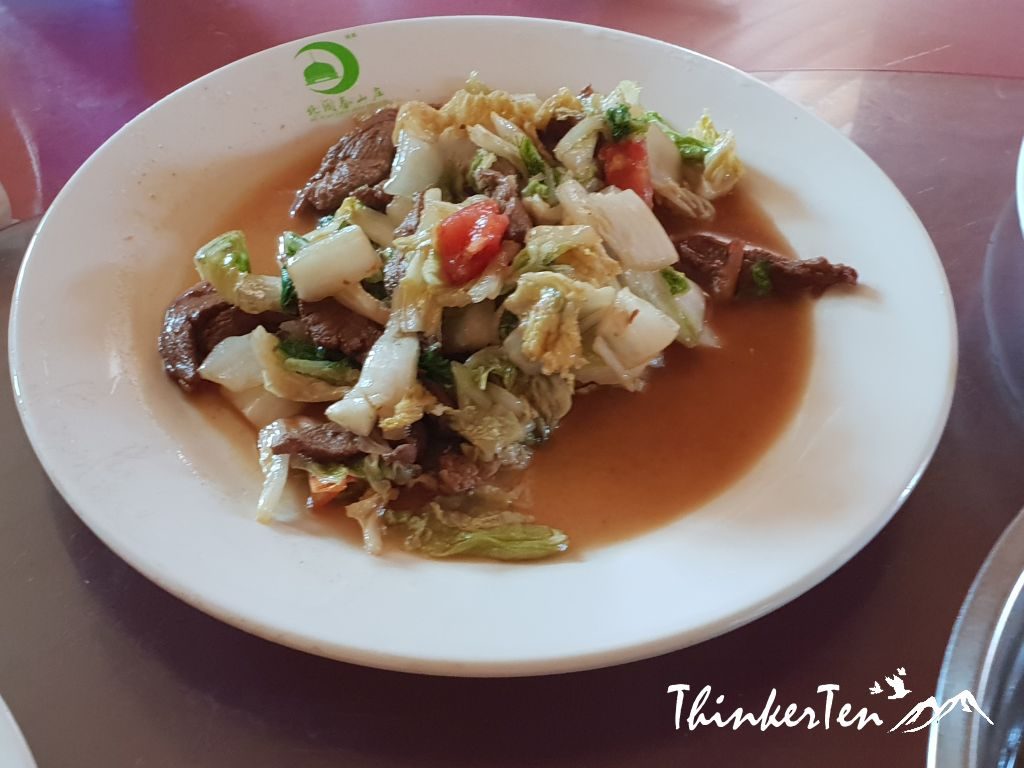 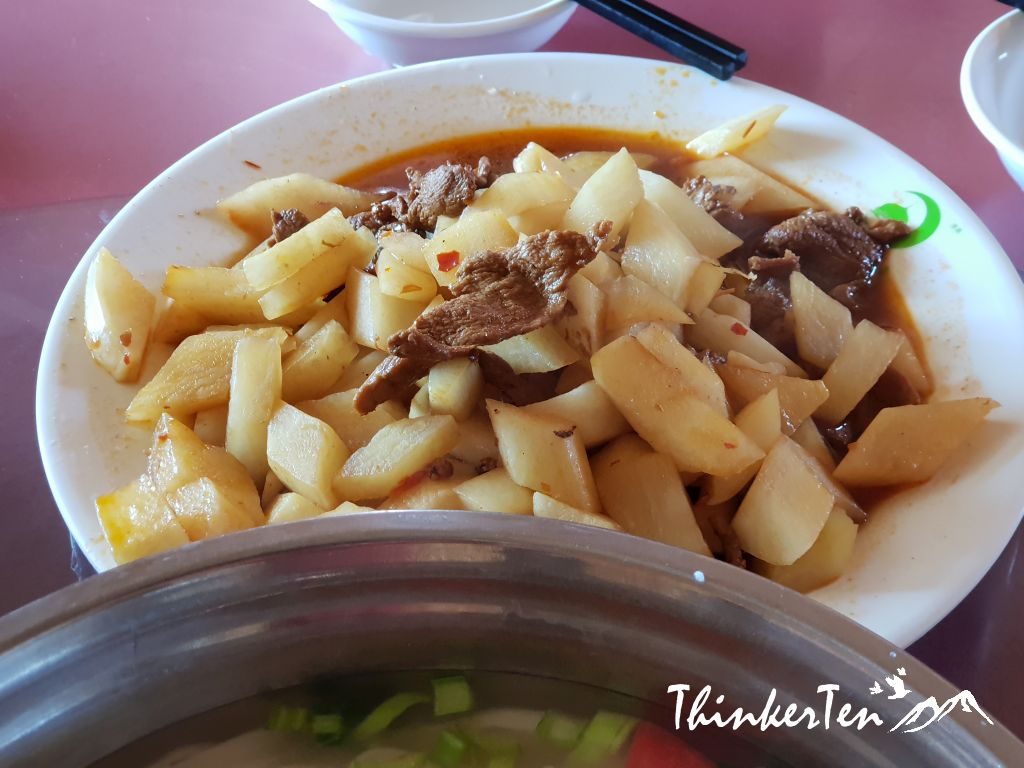 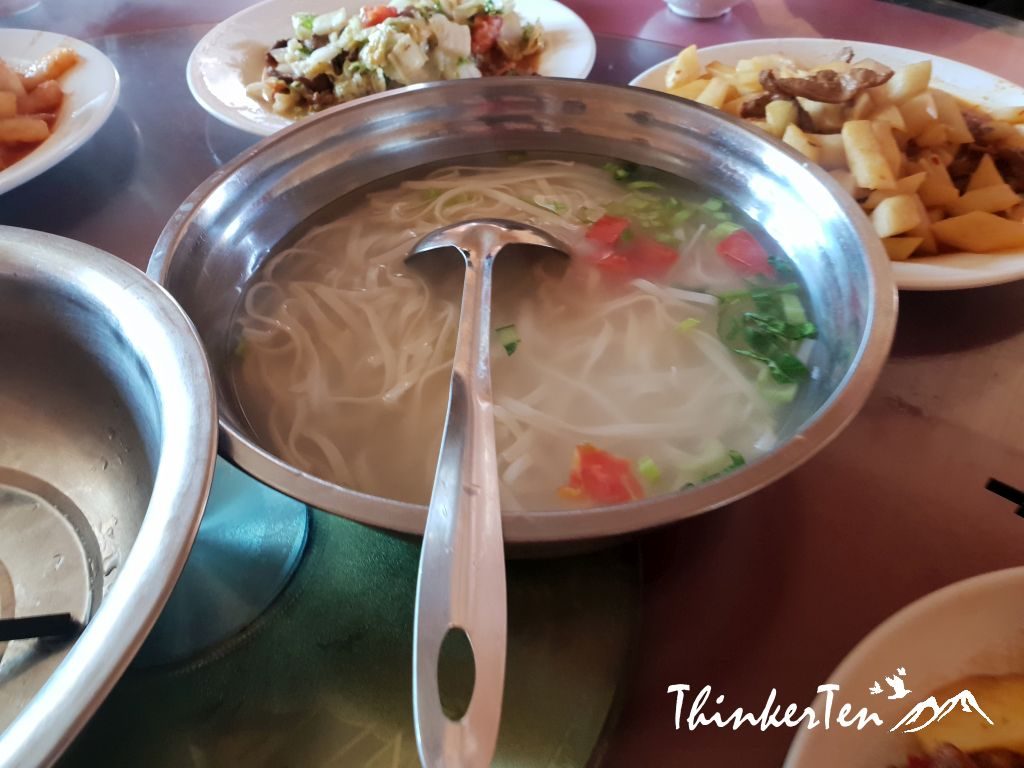 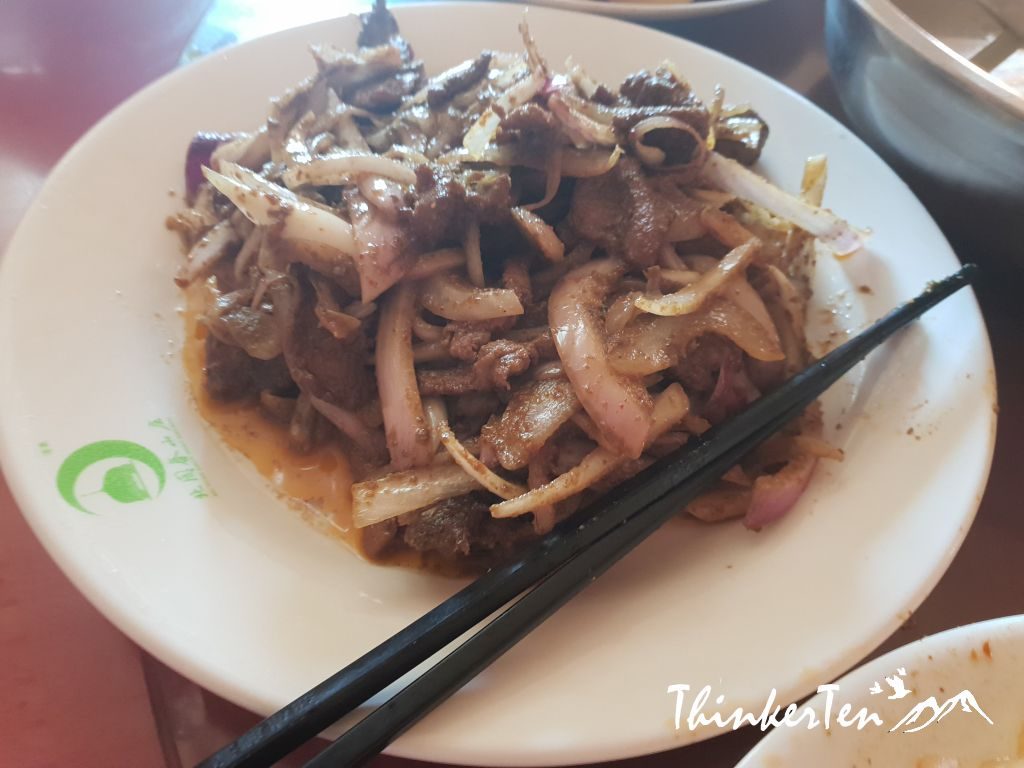 After our lunch at Hemu Village, we decided to do a little hiking up the hill. However we needed to cross over to a river in order to go up the hill and the bridge was broken due to heavy rain few days ago. 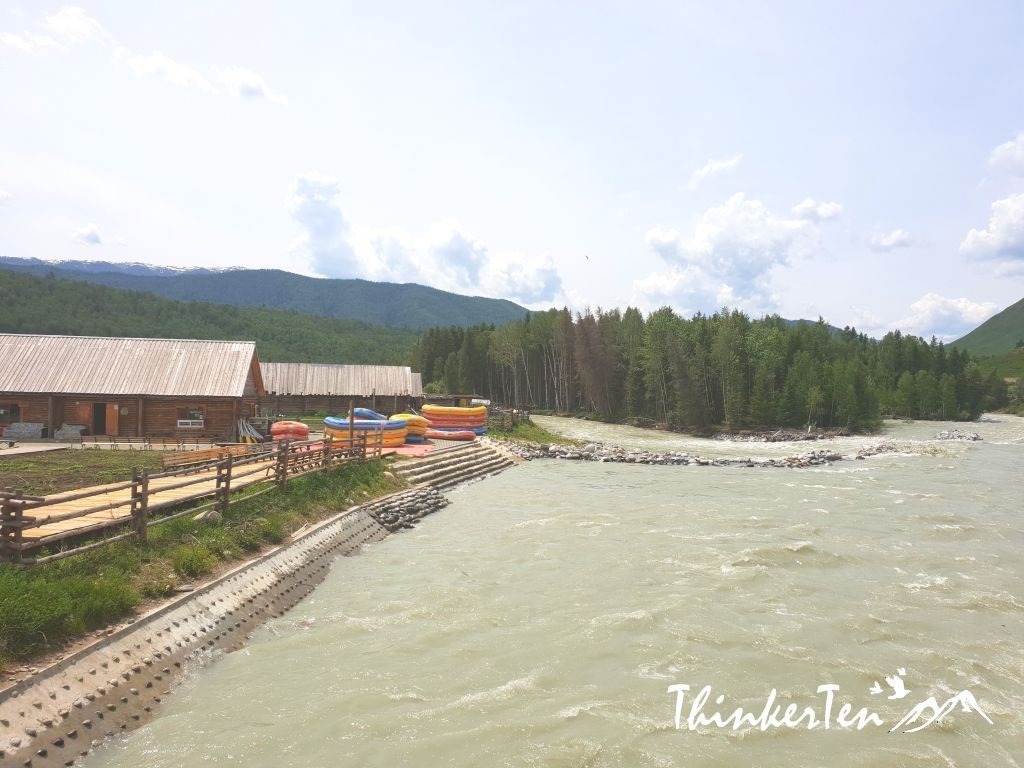 I see there is water rafting in Hemu River and if you dare, why not.  The water look very rough in the river so should be very good for water rafting. 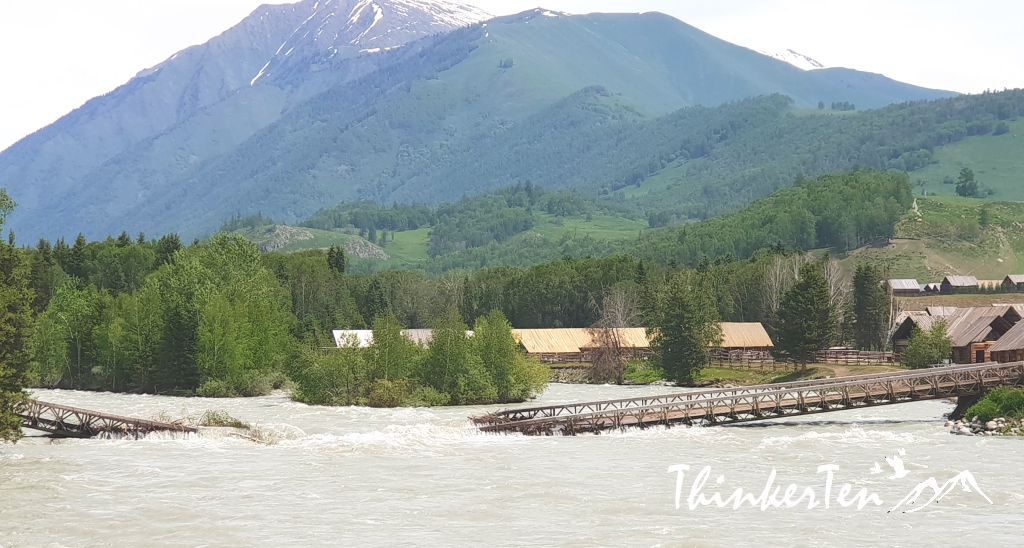 So we have to choose another path, a simpler bridge to cross over to the other side. 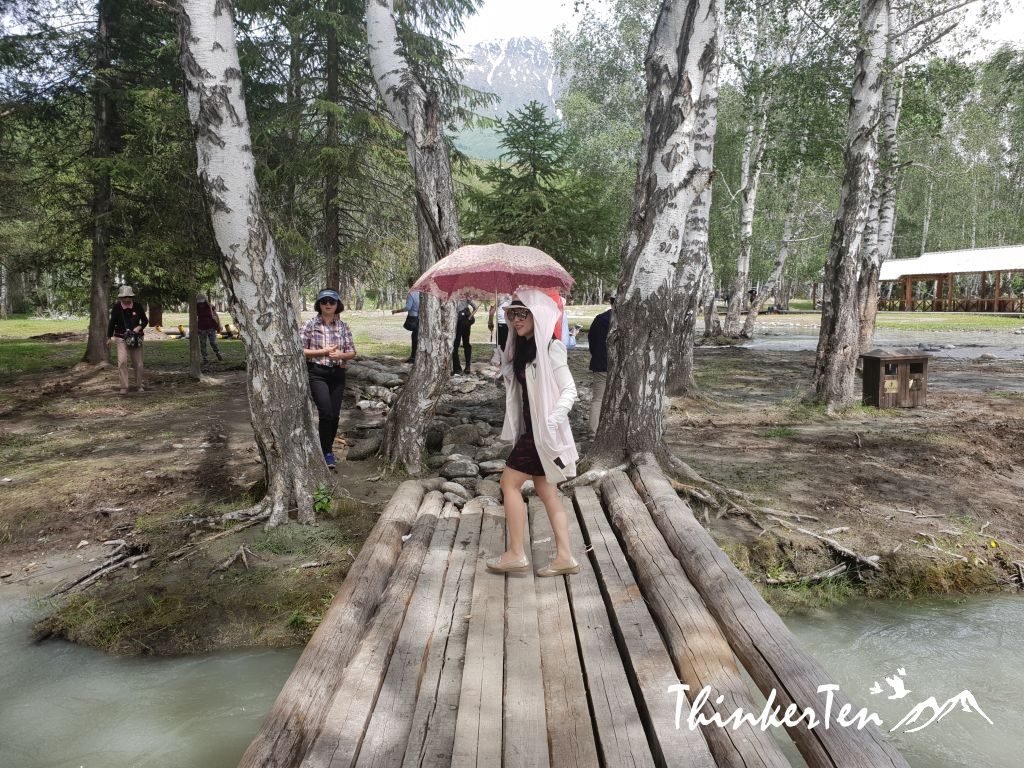 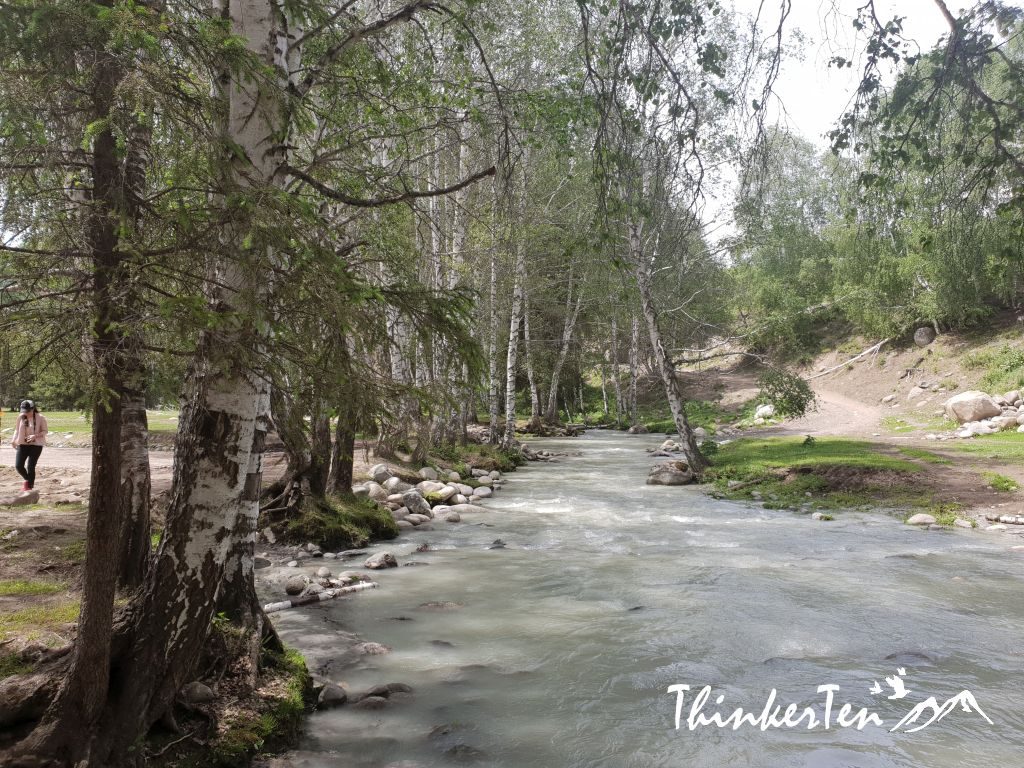 There are many wooden stair to climb up to the top and the weather is getting warm when you do a lot of climbing up.  So I have to take off my layers. 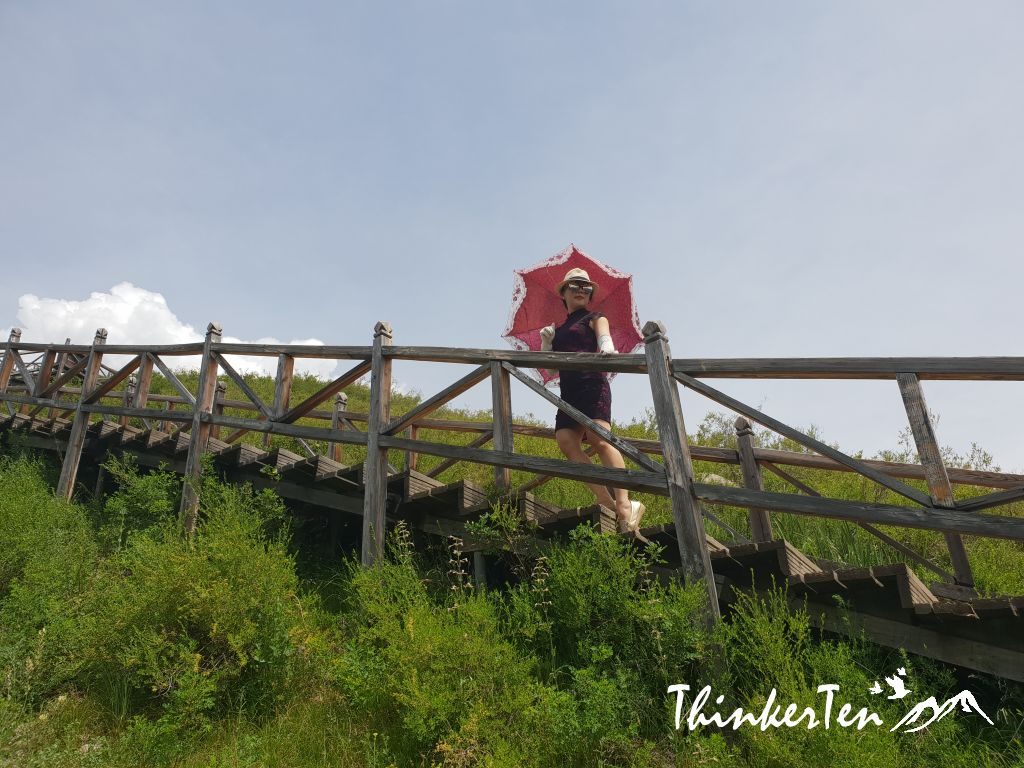 From the top, we finally can see the entire village which are made in wooden log cabin, similar to Shirakawa-Go in Japan, except the roof top is different. The Hemu Village is also surrounded by forests and grasslands. At the peak, you also able to see the Hemu river. 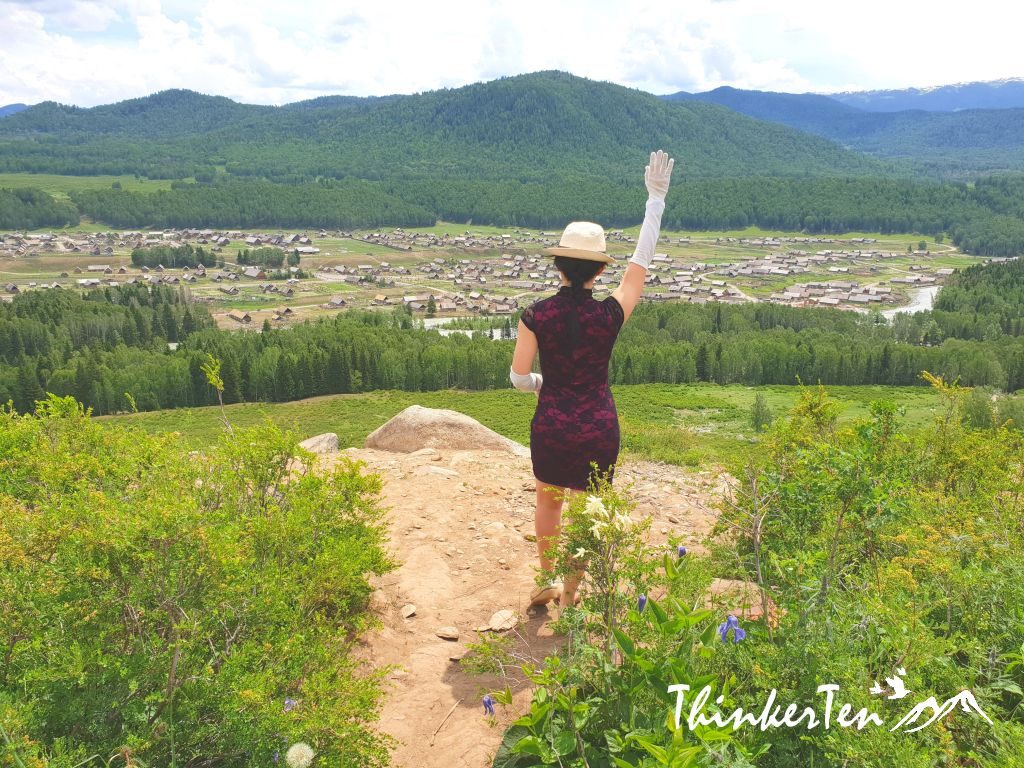 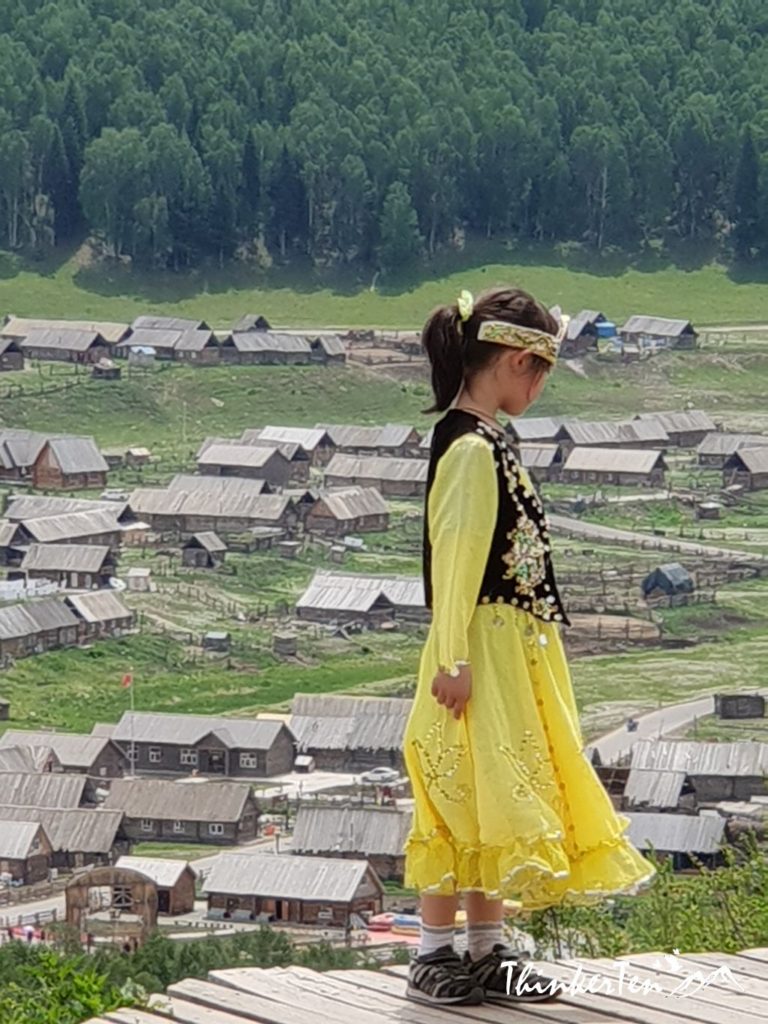 Rent a Costume for Photo Shoot

On top of the peak, you can get water and snacks and rent a costume for few dollars. 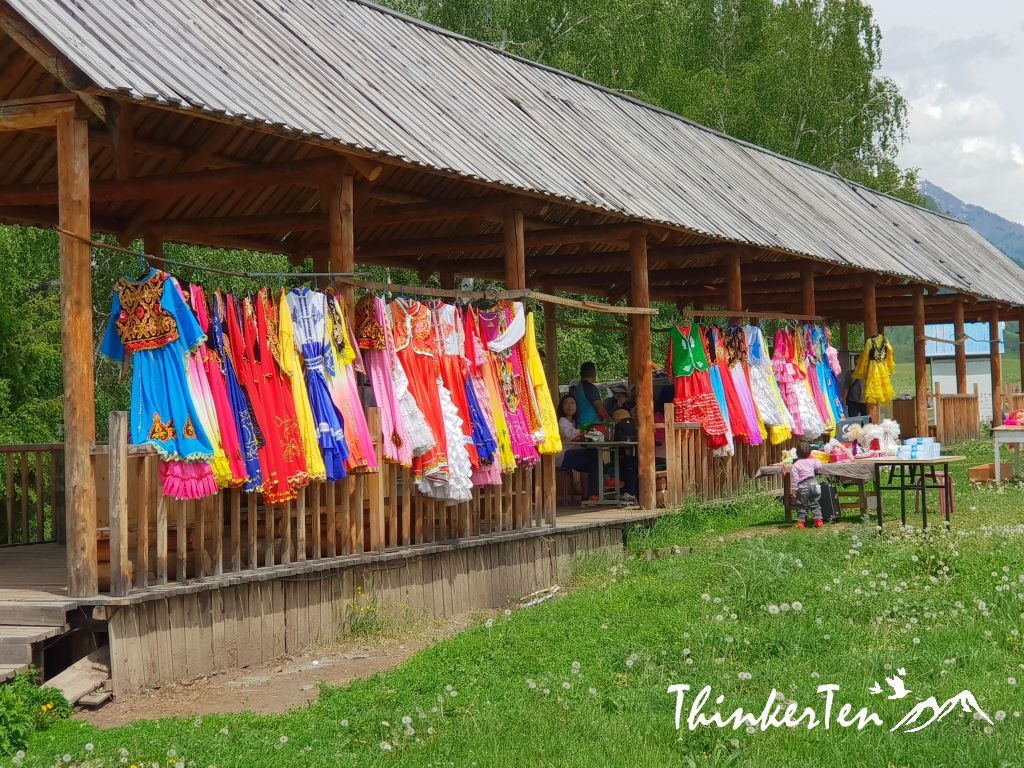 I rented a Kazakh costume and play around in the grassland. 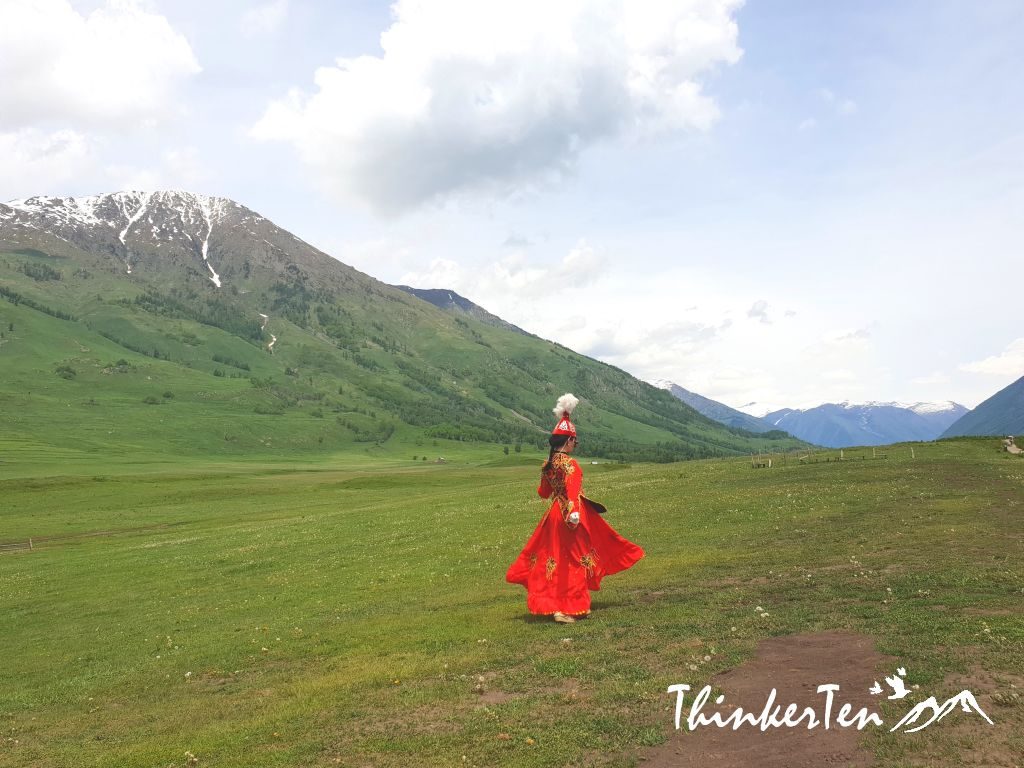 The headgear of the Kazakh is pretty cute, it has the owl’s feathers sewed to the top for decoration purposes.  Well, it make me look taller. 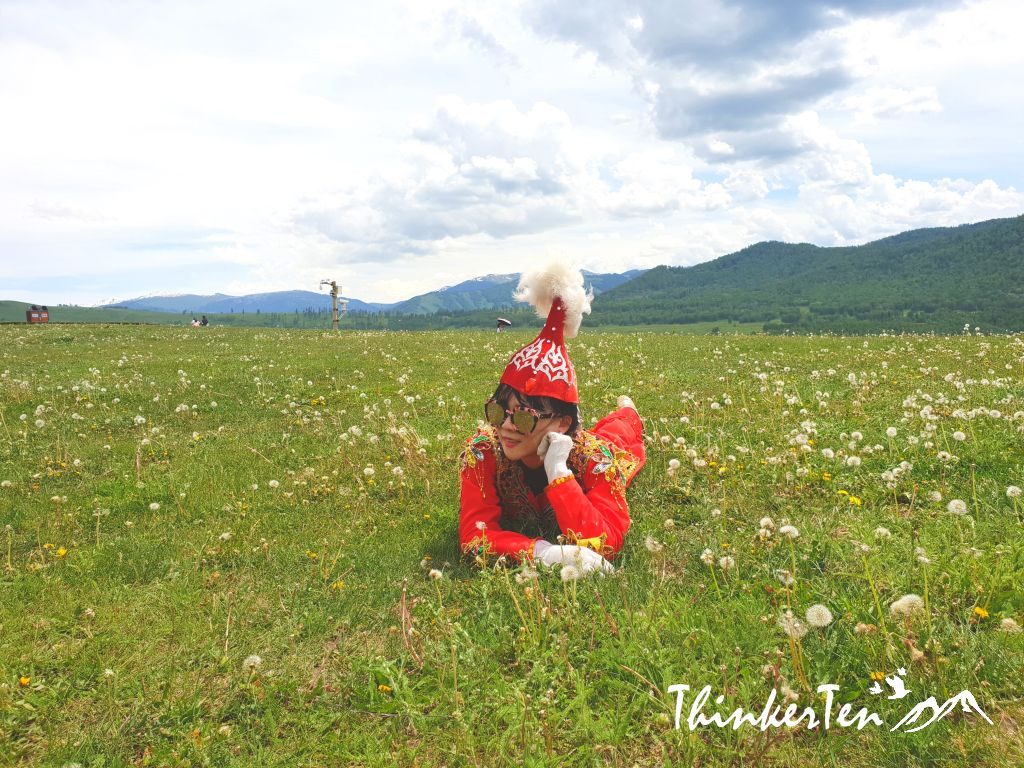 Autumn is Best Time to visit!

Hemu Village is said to have the title of “photographer paradise” and many award-winning photography works come from here. This place is most beautiful during autumn in the month of September. You got to see the different colors of the wood, ranging from yellow to orange and some red. 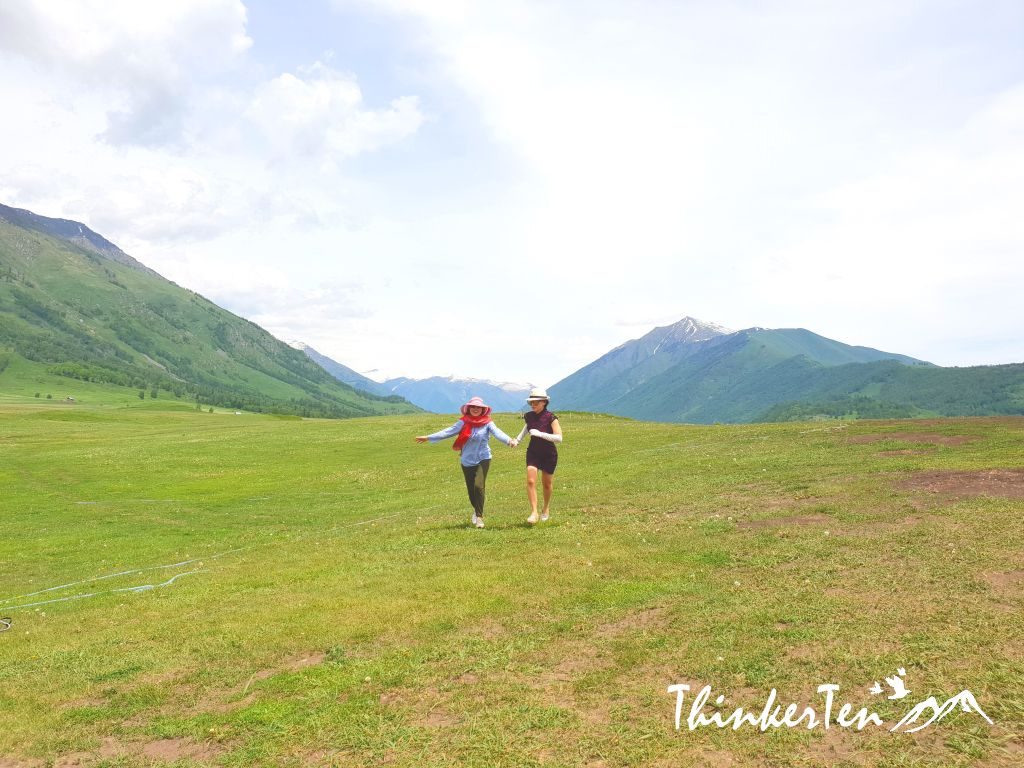 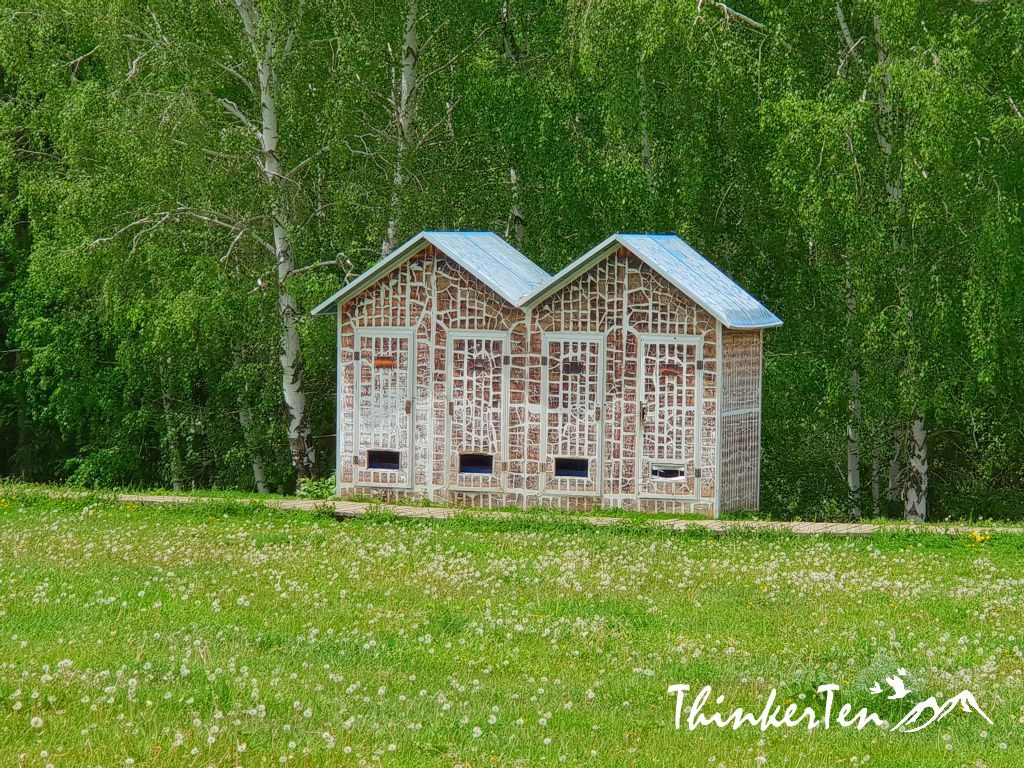 You may want to try the horse riding, the horse owner may bring you to deserted grassland but always go in a group of few people. Please speak to agreed price before you hop to the horse. 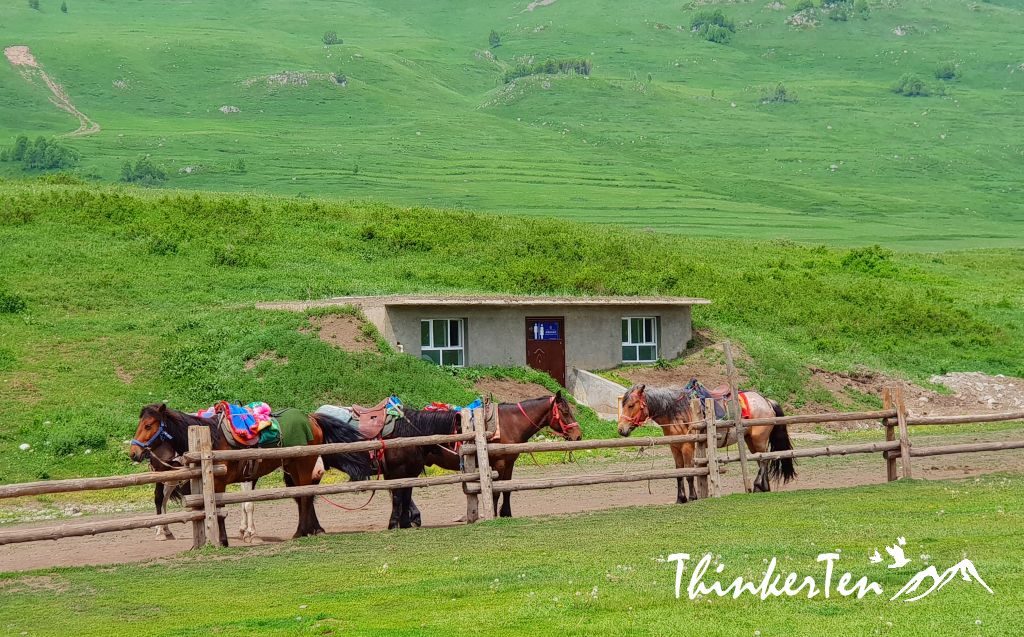 Hemu Village is the biggest village for the Tuwa people in Xinjiang China. It is largest of the remaining Tuwa villages (the other two are Kanas Village and Baihaba Village). No doubt the scenery is beautiful in Hemu Village. The summer grass is green and the Hemu village is sheltered by the woods. In winter, the view would be different and covered with white snow. But Hemu Village only open from May to October.

I came here in summer but the best timing to visit in Autumn. However, I really love the winter of Hemu Village, seen the winter pictures here, the entire Hemu Village is covered with the white & thick snow, so unreal! We don’t get to see such old village these days. 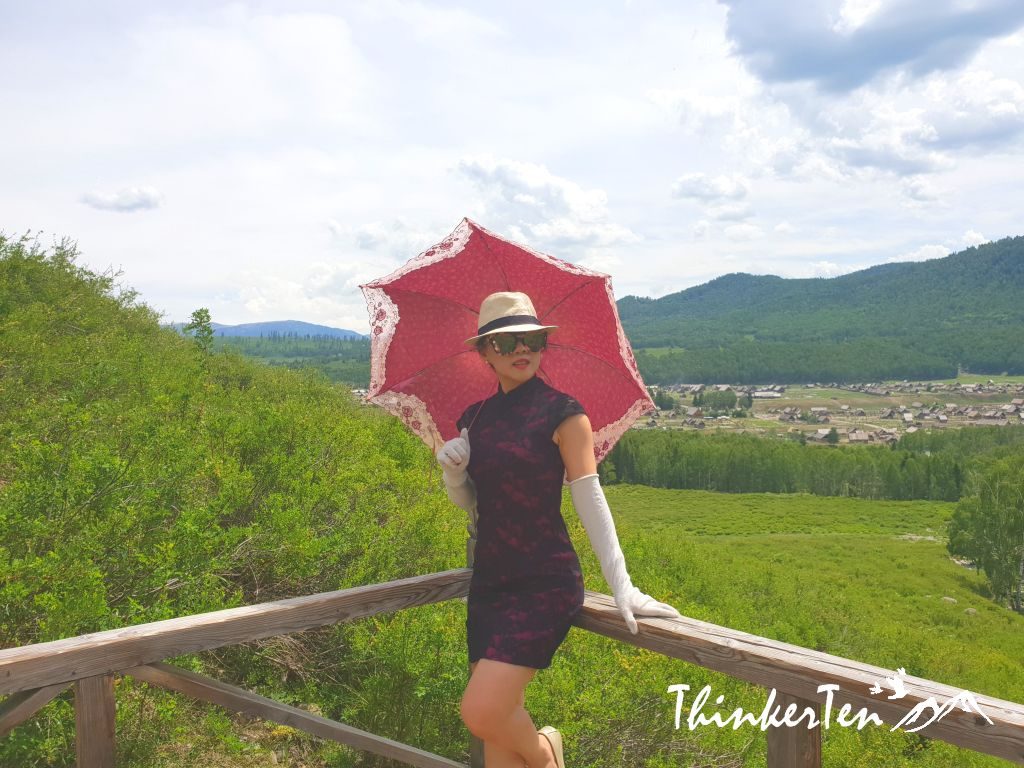 Myanmar : Travel back to the Past with Time Capsule – The Circular Train Yangon

Thank you for the beautiful insight into the village of Tuwans…lovely pics…Such pure people… struggling to maintain their culture…
Very well written..

Tuwan live their life simiar to Mongolian, livein in yurts and play similar music instrument. The village is simple looking, built with wooden log but people are friendly.

The village looks amazing and I am so happy that they have included vegetables into their diet to be healthier. Thanks for sharing.

Yes, they have started to include vegetables into their diet as they have more illness from only having meat. But long time ago, they dislike vegetables and think only cows and sheeps are the one that eating grass. They aren’t cow and sheep so no way for them to have vegetables. 🙂

What a neat village. I enjoyed looking at all your photos. This would be such a cool place to check out.

How interesting that they did not eat fruits and veggies. I am glad they the realized that they needed them.

Dear Tara,
Haha, they do realise now as they had some illness from eating too much meat. We certainly need balance diet. At least, I can’t live without vegetables!! 🙂

What an amazing experience this seems to be! I love that you really got involved and visited real places where people live and amerced yourself in the culture.

The Hemu Village is a real village for the minority Tuwa, they regards themselves as Genghis Khan descendants. I guess they are proud of their ancestor since all houses hang a Genghis Kan picture 🙂

I really want to visit China one day. this place looks gorgeous!

China is really getting so advance and so organized in their tourism. The attractions are clean and nice to explore but then the tickets for the attraction sights arent cheap. You dont see any beggars now compare to 10 – 20 years ago. The nation is getting rich. Their infrastructure is good as they are bullet trains connecting from one cities to another. Of course there are also plenty of domestic flights connecting all the provinces and cities. Anyone who has never been to China should go and have a look how advance the country is. I have been to China many times and each time I see the improvement of the country. I am afraid the country will get more expensive to visit later.

Never seen such a beautiful village earlier. China is already in my bucket list but not this village but will try to visit this place soon. I loved all your pictures. Thanks for sharing

China has so much to offer and Xinjiang is always the destination for people who has been to China several times. For someone who knows more about China. Beginner will go to Beijing and Shanghai.

I did not know that Arabic was a language that was also spoken in China. That’s so interesting.

The Arabic written on the banner was used for the minority people in Xinjiang. There are over 50 ethnic minority group in China and in Xinjiang province, the Uyghur are the majority that stay in China. Uyghur people are Turkic ethnic group, their language is different from Chinese.

This post got me so excited for my upcoming trip! I will be in China this coming November – first time in Asia!

Great to learn that you will be in China in November. Wish you have a memorable time in China.

These photos are great. What an experience you had. Thank you for sharing interesting information and personal stories from visiting this village

I have been out in China. Not in that village but in other ones. The only thing that makes me afraid are the wooden toilets honestly. The rest of your journey looks pretty amazing out there. So pretty.

It happen to most of the people who travel to China, the scary wooden toilet with no water flush. 🙂

I don’t think I’ve ever seen this side of China. It looks a lot like the US!

Probably the countryside of US.

The photos are so pretty! It’s so interesting to know things about this place in China.

I would love to visit this village. Especially for the food!

The food is quite basic food of Xinjiang, which include the big plate chicken with potatoes & Chili and other simple dishes.

The pictures here are gorgeous! China has always been a place I have wanted to visit. Perhaps I will be able to one day. Thanks for sharing!

This looks like it would be an amazing and beautiful experience. I would love to experience it all for myself.

oh my! U makes me wanna go china now.. Those places are superb.. breaktaking views..