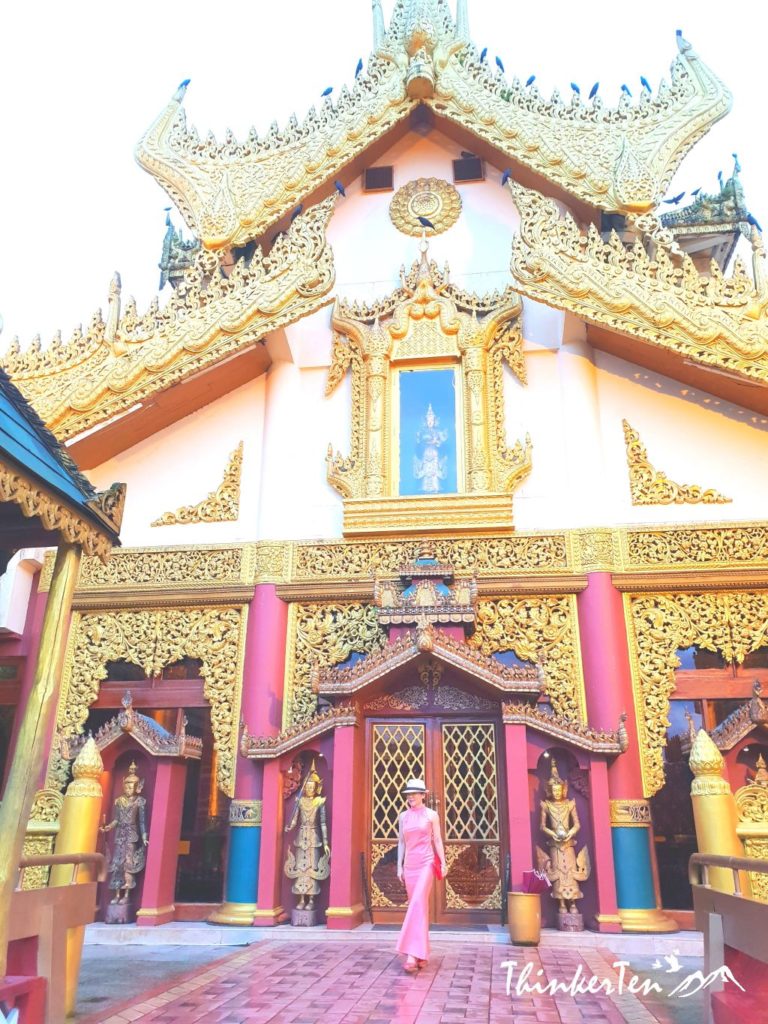 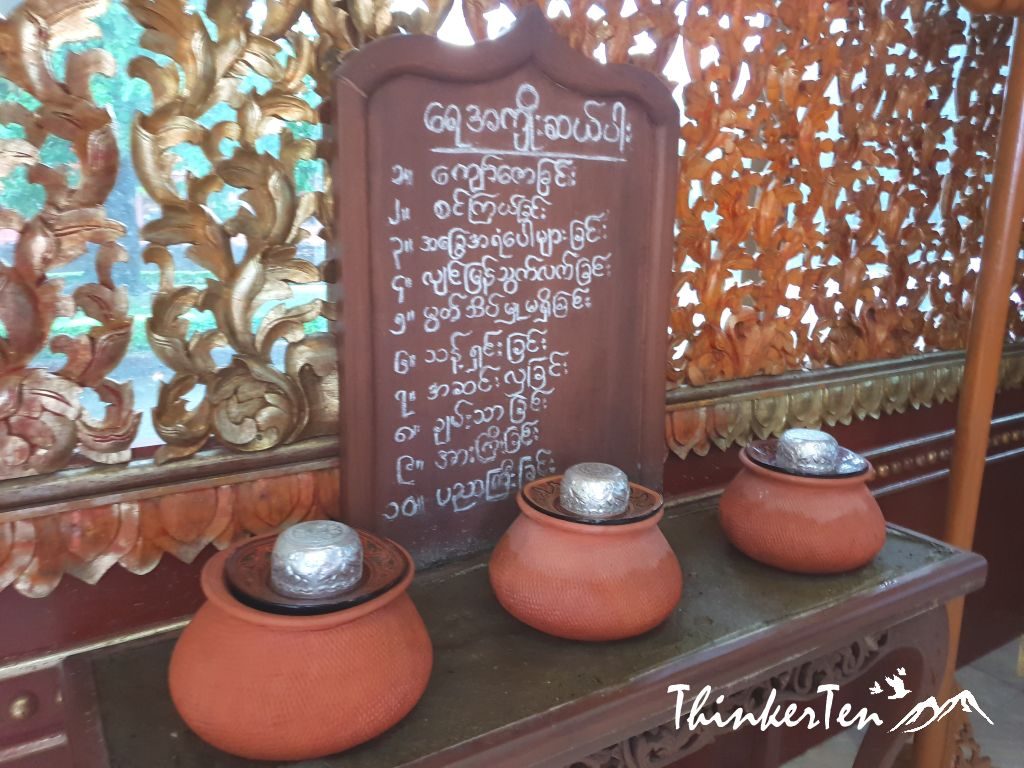 Karaweik Palace is build on the eastern shore of an artificial lake – Kandawgyi Lake located in the center of Yangon, facing the stunning Shwedagon Pagoda.  The Kandawgyi Lake literally mean “great royal lake” is one of the two major lakes in Yangon. The water is coming from Inya Lake, another popular recreational area for people who lives in Yangon.  The artificial Kandawgyi Lake was built during the British colonial time as a reservoir, supplying water to the city. 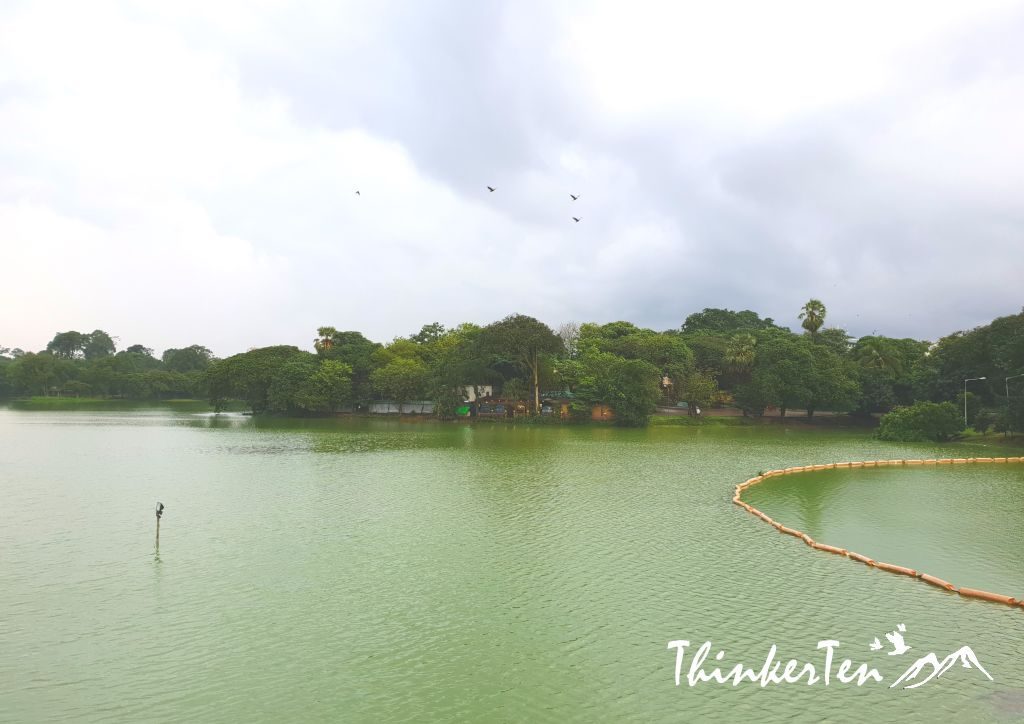 The whole building of Karaweik Palace is glided with gold and resemble a royal boat. The front of the boat looks like a mythological bird from Myanmar folklore and legends. The rear of the boat is the bird’s tail. Two striking colors found are cold and red used in this magnificent building.

Karaweik Palace is now a classy restaurant and serve international buffet and cultural show while you dine.

Welcome by different ethnic tribe at the entrance walkway

The grand entrance is approached by a long walkway over the water. There are several little stalls set up and served by the ethnic minority from Myanmar. Guests are welcome to see how these snacks are made and try them out. 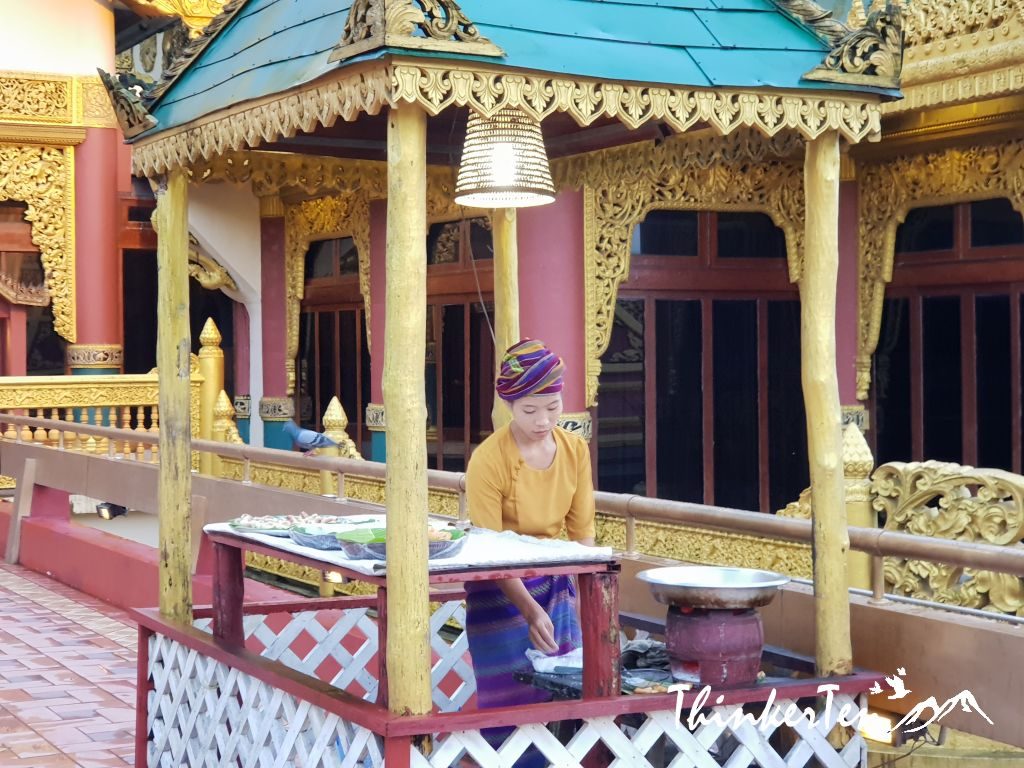 There are over 100 different ethnic groups in Myanmar, almost one times more than China. But majority of the group are Bamar people who make up 2/3 of the whole population. Shan is another ethinic groups in Myanmar, which are from Tai ethnic groups. Their food taste similar to Thai which I quite prefer. Original Shan people are believed to have migrated from Yunnan China. There are also Shan cuisine served in the international buffet spread in Karaweik Palace restaurant. 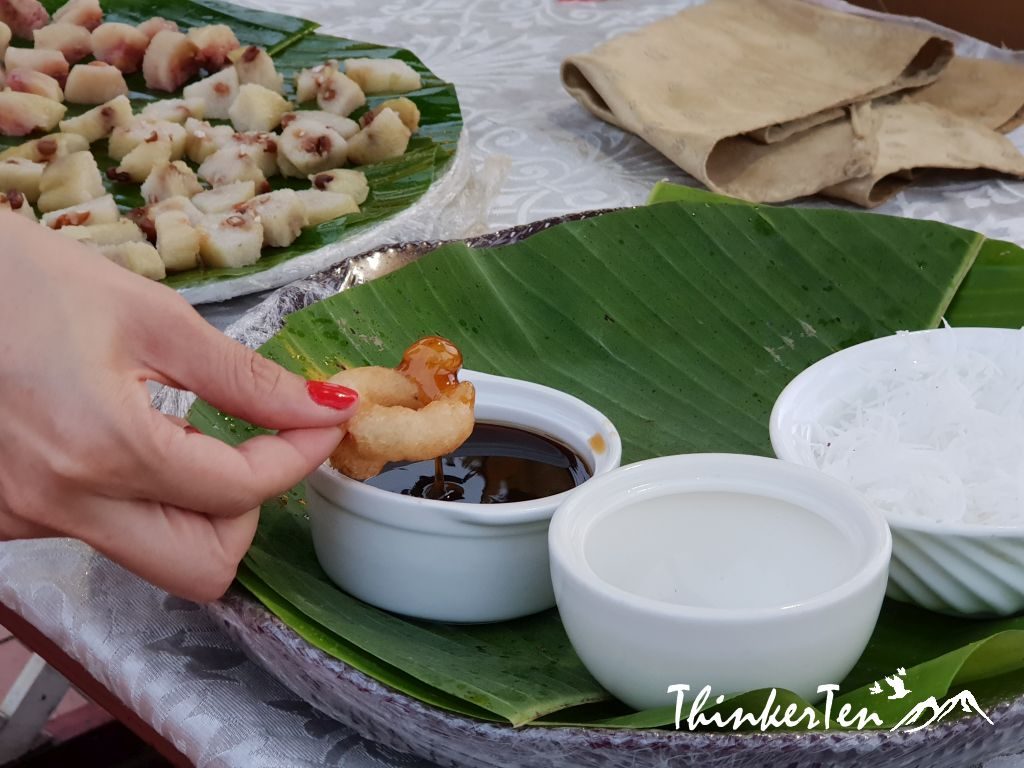 Some of the snacks found here are assorted fries such as pancake with peanuts, steamed rice cake & glutinous rice. Most of them are sweet snacks which topping with shredded coconut.  Since it is still serving hot so it is very delicious to have few small bites. 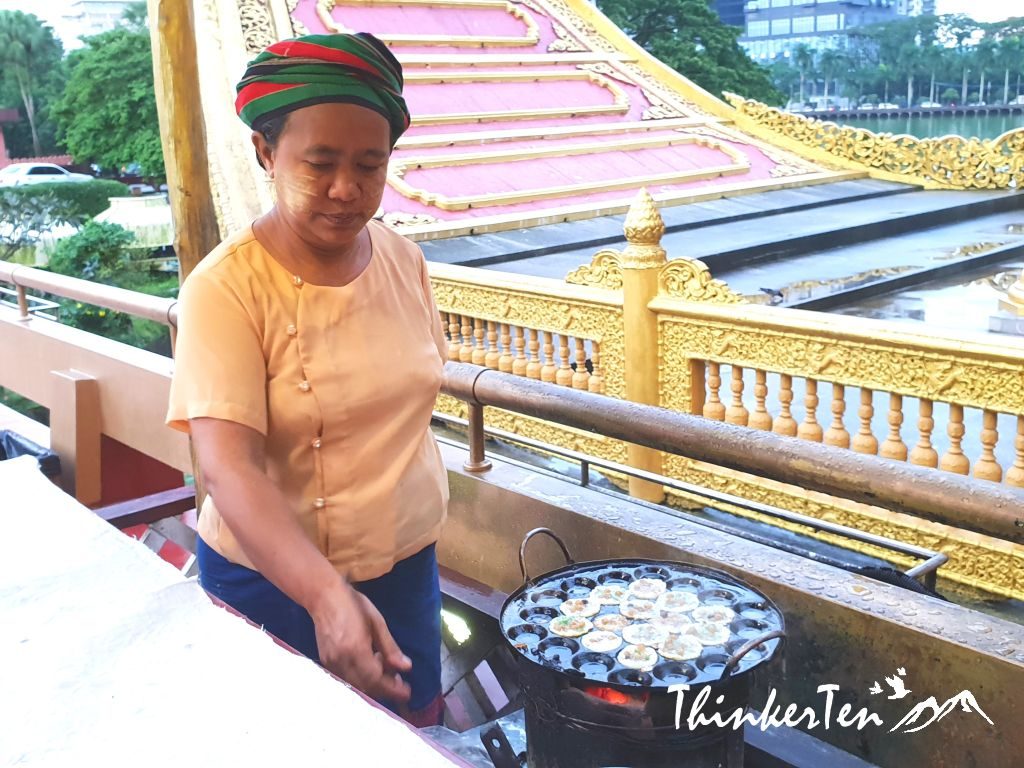 If you are lucky, you may see the Long Neck tribe here at the grand entrance serving the Myanmar snacks at the stalls. 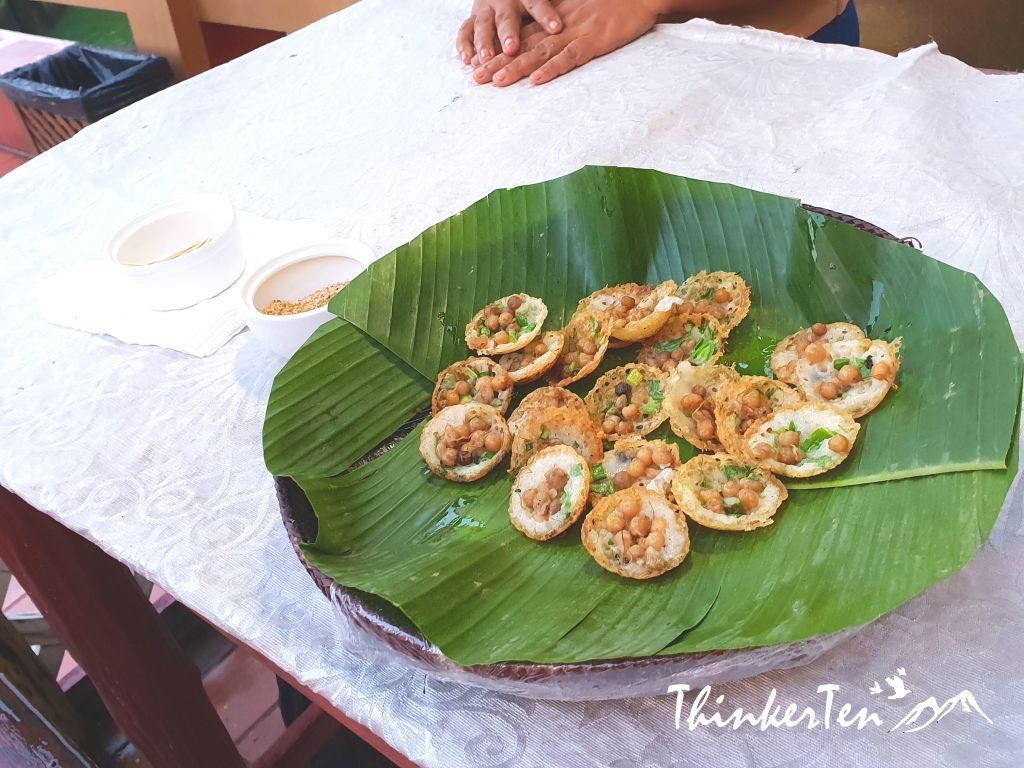 The Palace have a more stunning sight during the evening with the illumination reflected by the Kandawgyi Lake. If you have a good camera, you can capture the palace reflection from the lake. 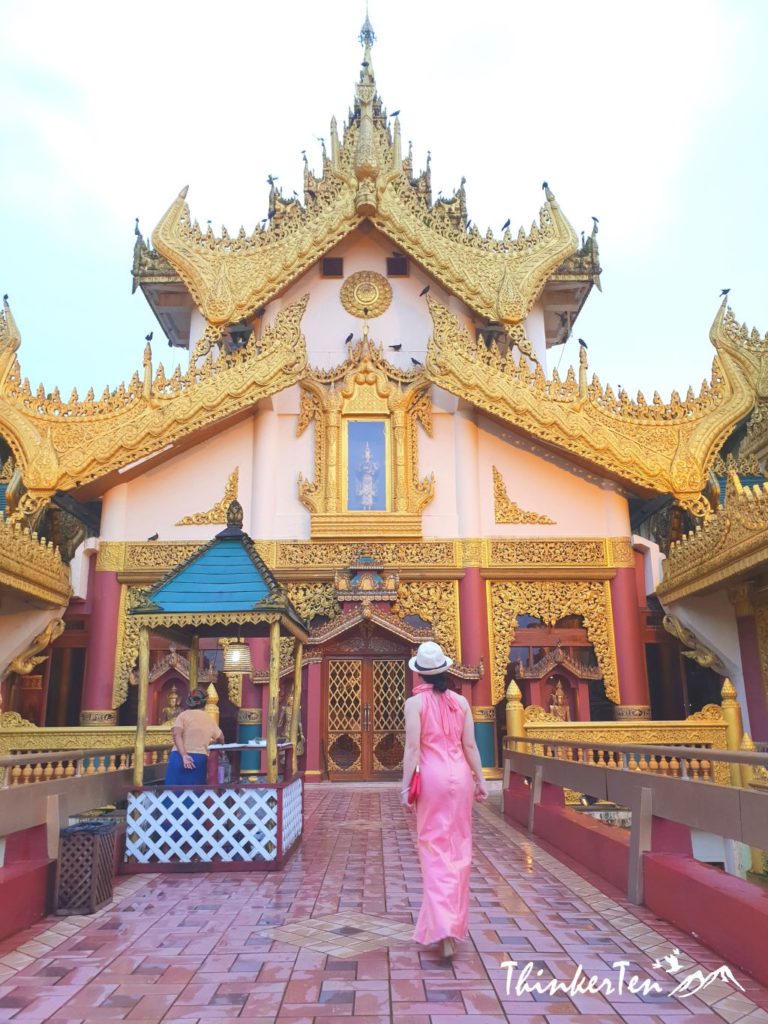 Upon entry to the Karaweik Hall, there is a Myanmar lady who will help visitors to put on the Thanaka on their faces, a yellowish white cosmetic paste made from the ground bark. It is one of the signature of the culture of Myanmar. I saw almost all women with painted yellow faces when I touched down at Yangon International Airport. Thanaka seems to apply to the face of women, girls and young children. Not many found in men. Thanaka has been used by Burmese for over 2000 years, they love the fragrant scent which is similar sandalwood. It also provides protection from sunburn and believe to help improve skin from ance and gives a smoother skin. 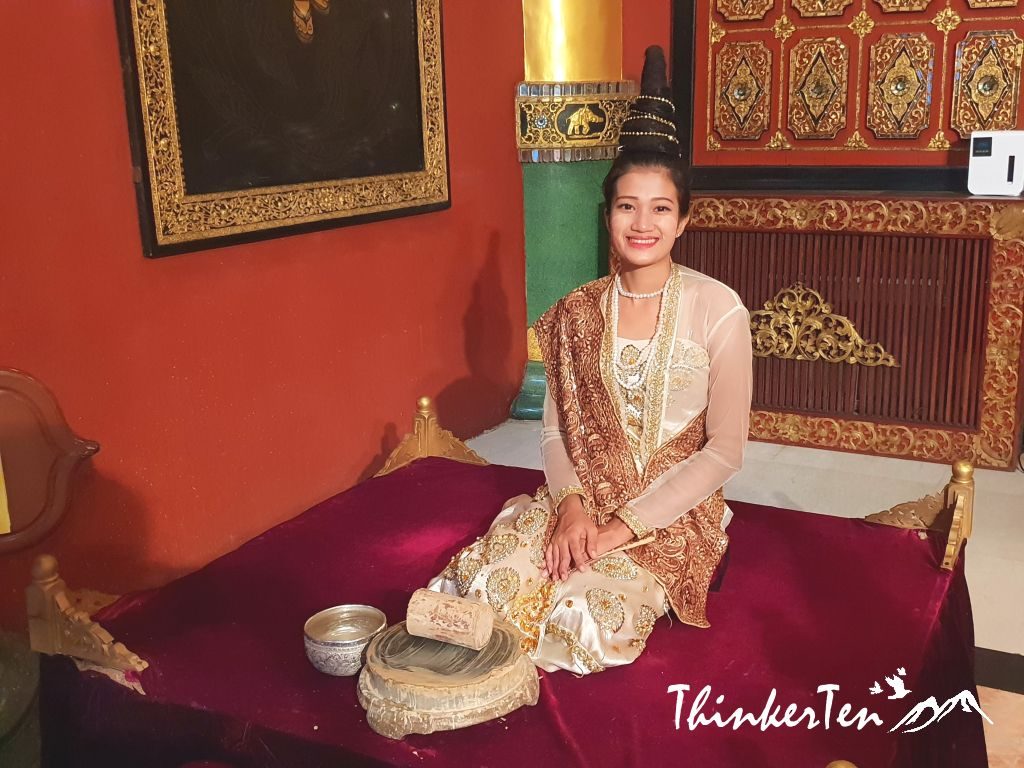 Myanmar music instruments are found at the entrance of the hall. The xylophone looking instrument is called “pattala” in Burmese, consisting of 24 bamboo slats suspended over a boat-shaped. It is played with two padded mallets. 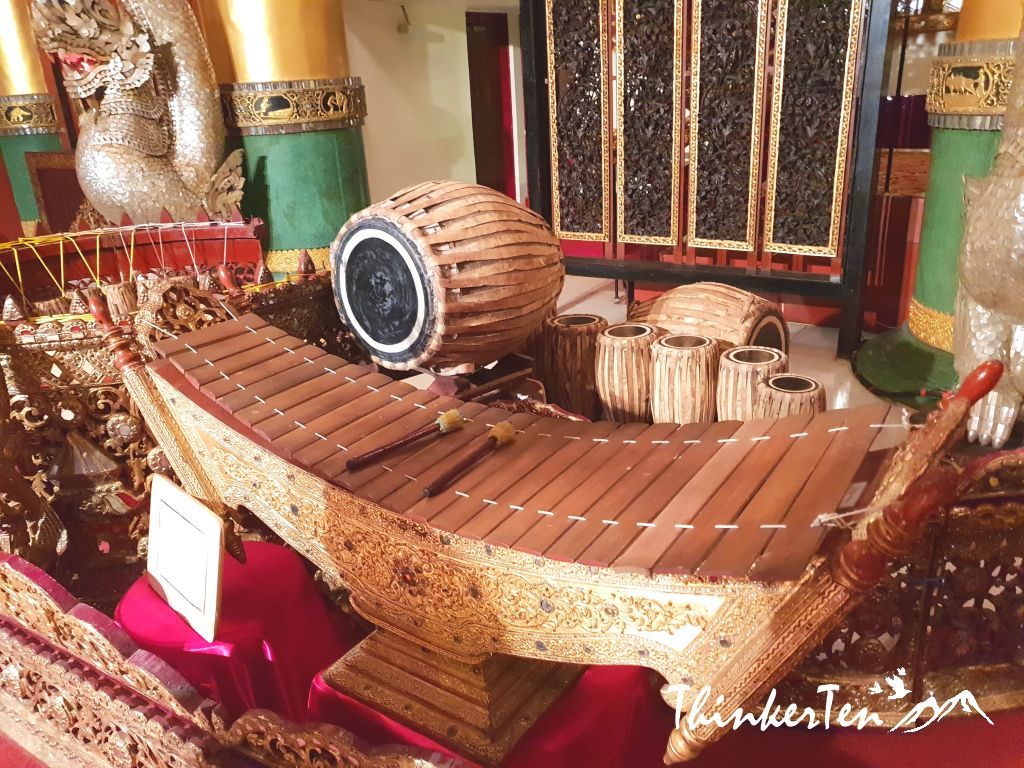 The stage and dining hall at the Karaweik Palace. 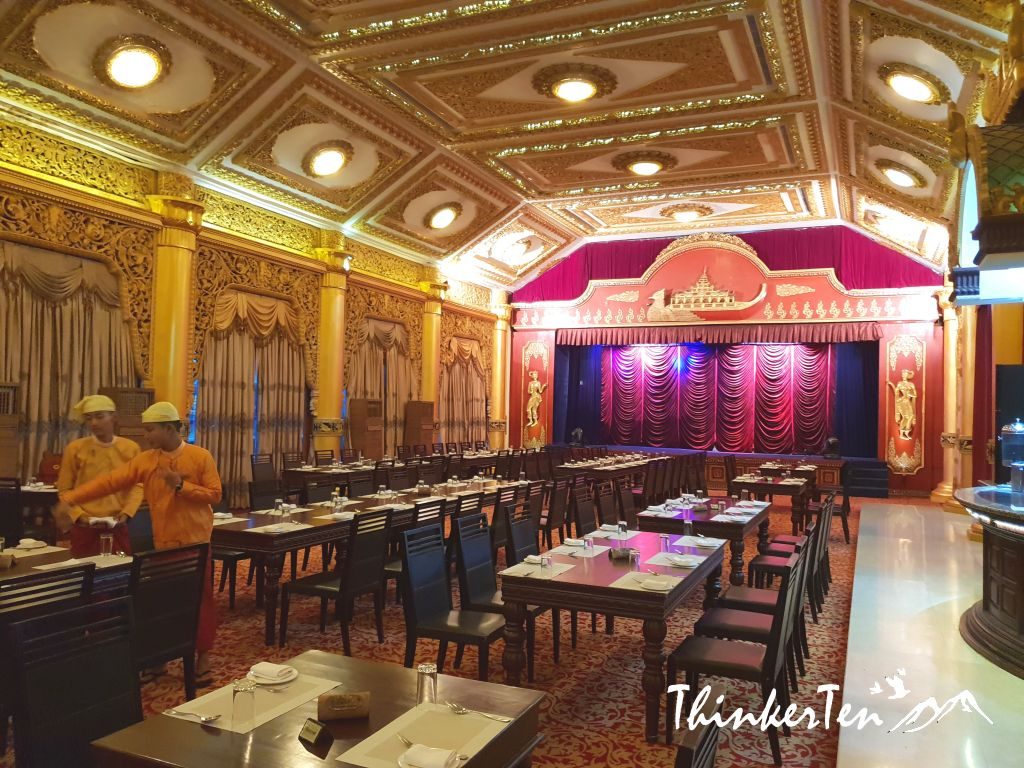 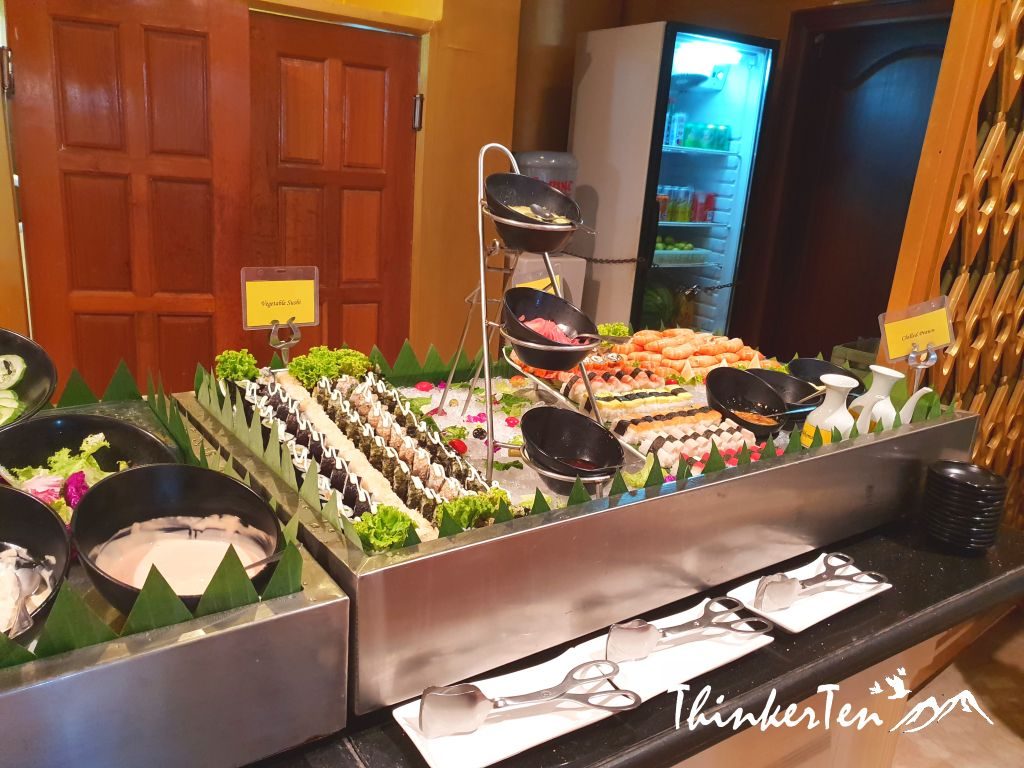 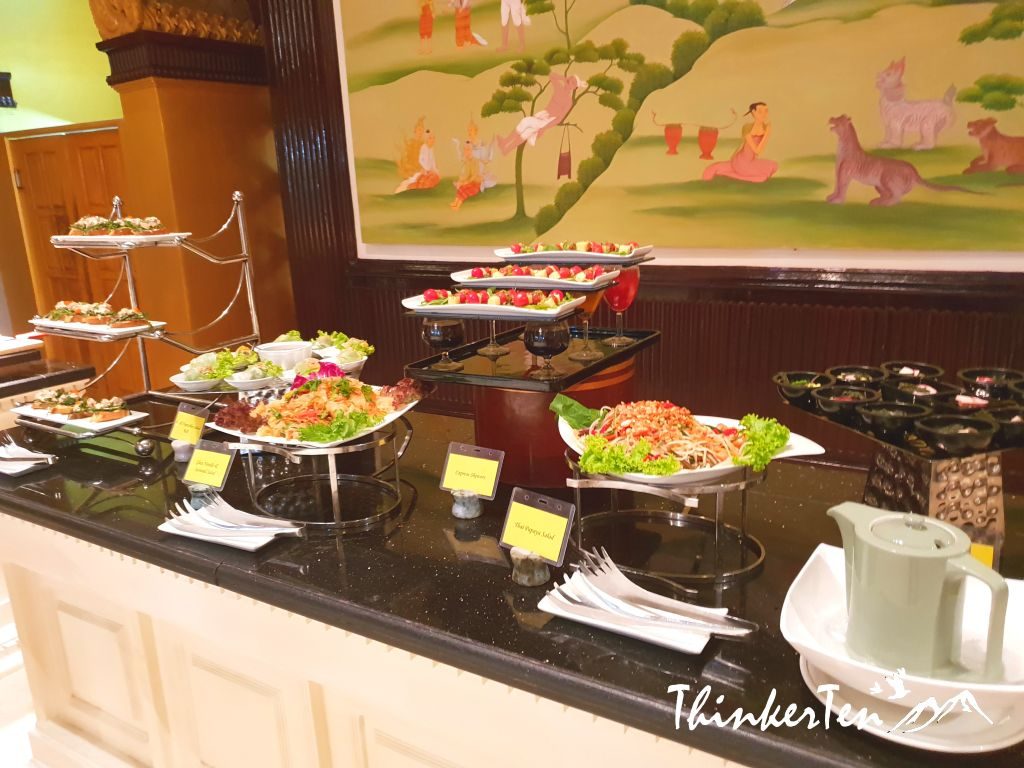 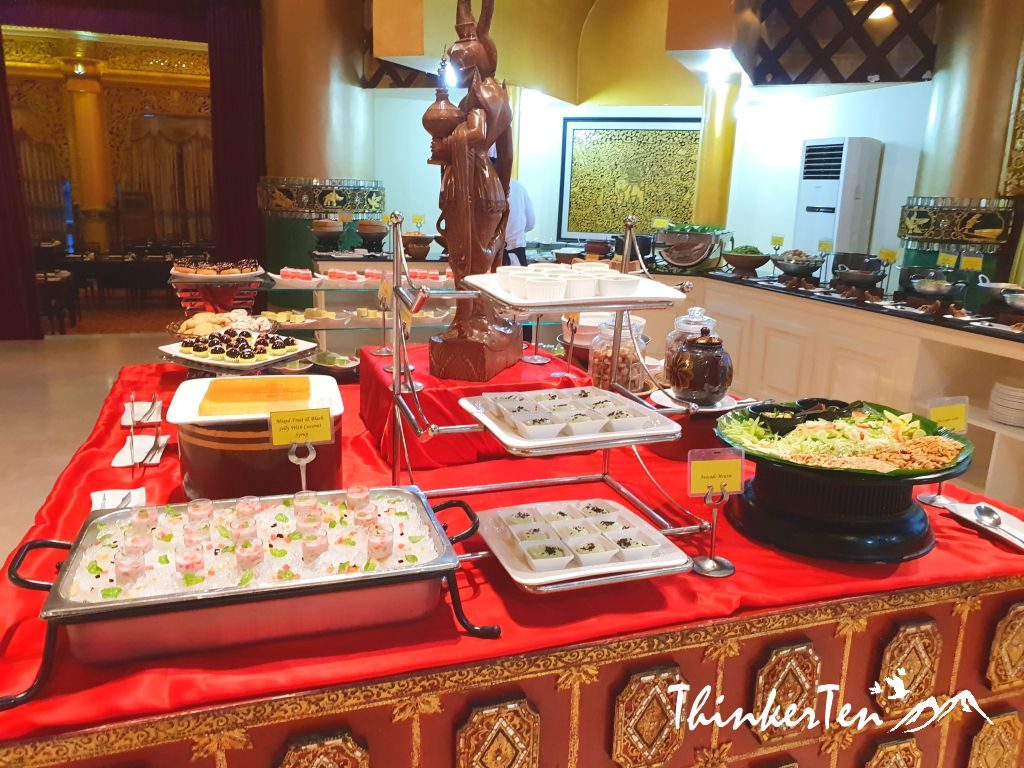 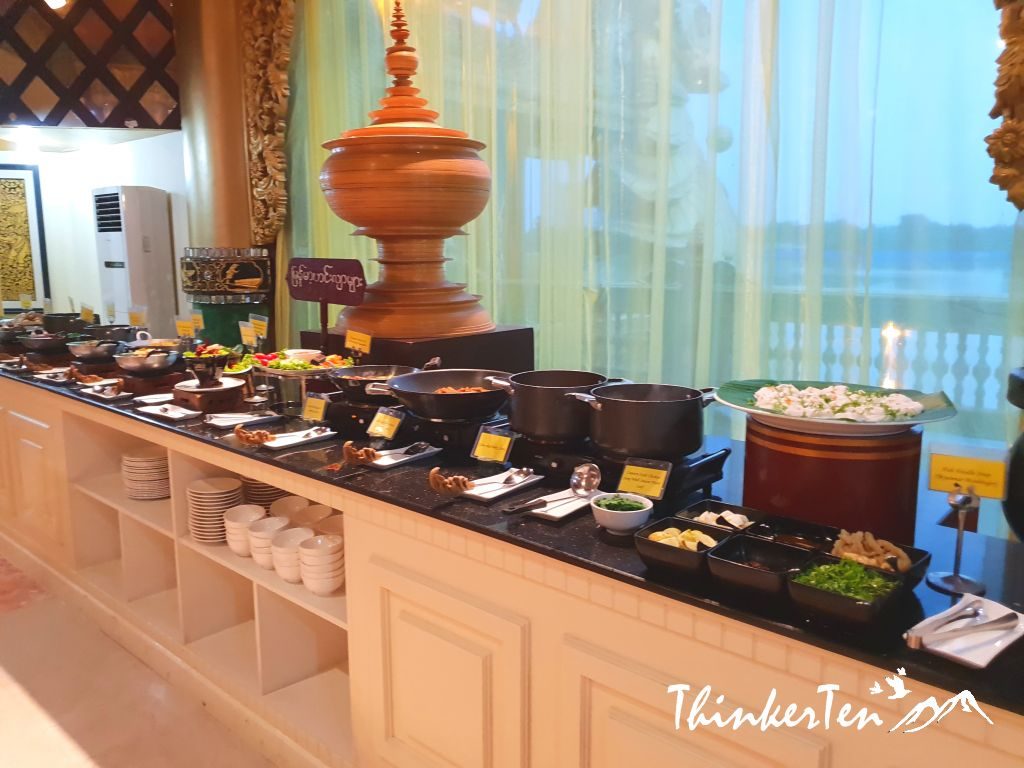 Ready to start to attack the food. 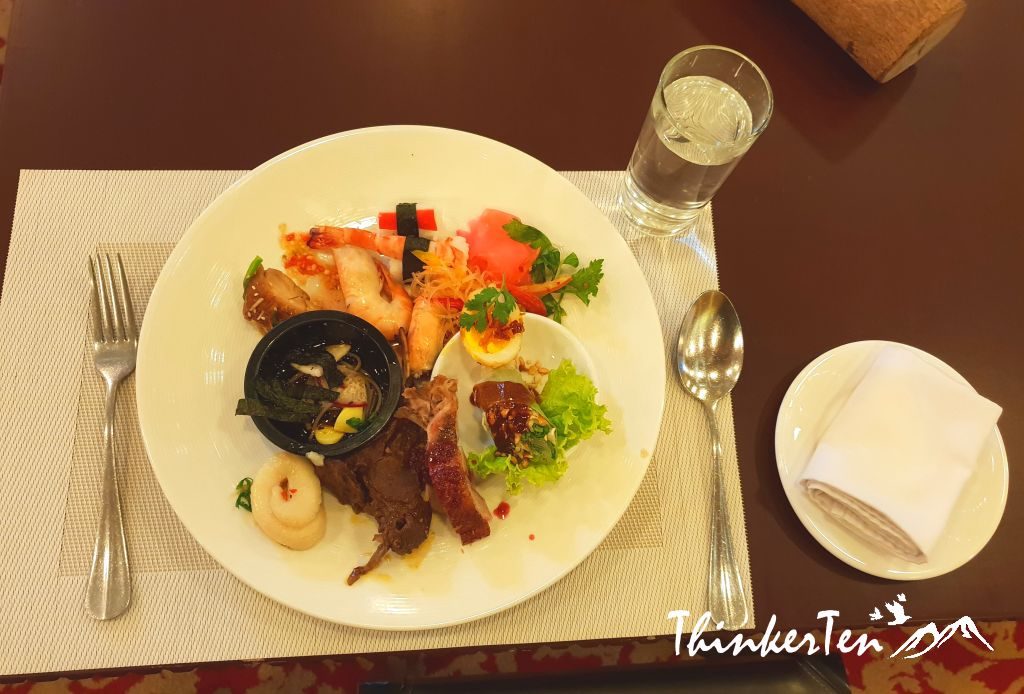 This is a must try in Myanmar, since I could not try street food as I have a weak stomach so I was so glad to find Mohinga here. It is a rice noodle soup with fish soup, usually eated for breakfast. The soup base has chickpea flour, garlic, onions, lemongrass, banana stem (eek), fish paste etc. It is served with rice vermicelli/beehoon, topped with squeeze lime, crisp fried onions, coriander, spring onions and other fried stuff. The verdict, I don’t like it as I don’t appreciate the chickpea used for soup base, very sticky and tasted weird for me. I don’t dislike all sticky base soup, I do like Lor mee.  🙂 Since it is Myanmar national dish, a must try. 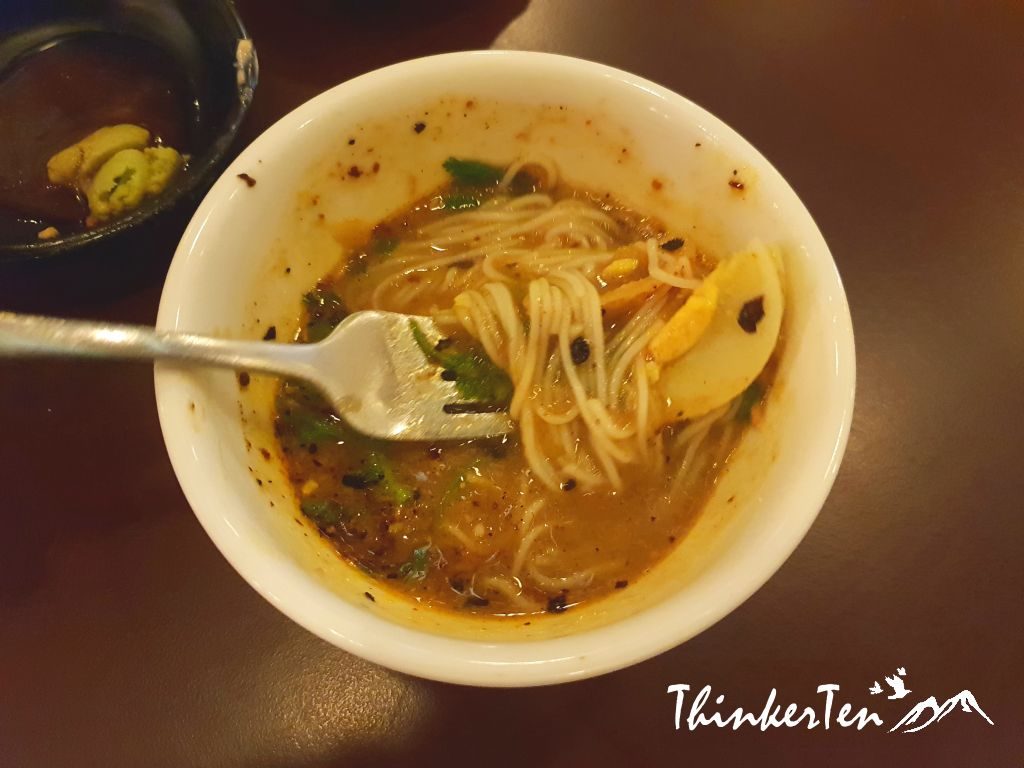 The stage in Karaweik Palace aren’t big.  There is an emcee who speak English throughout the whole show introducing the arts, dance and culture to the hungry audience. 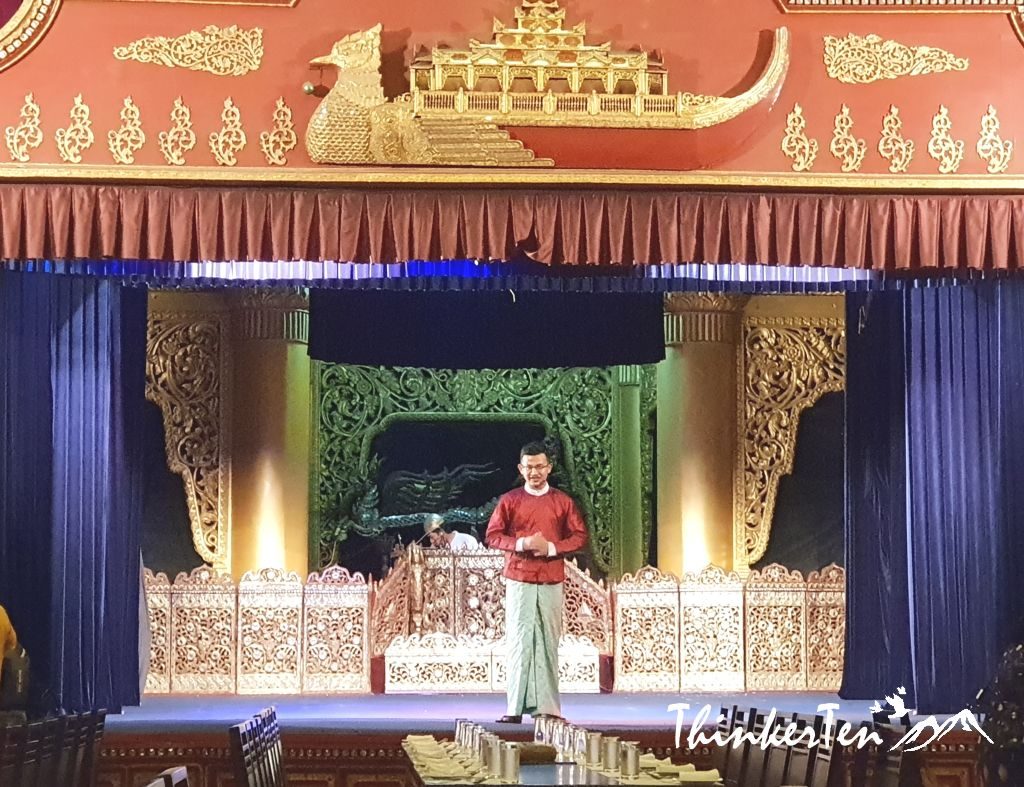 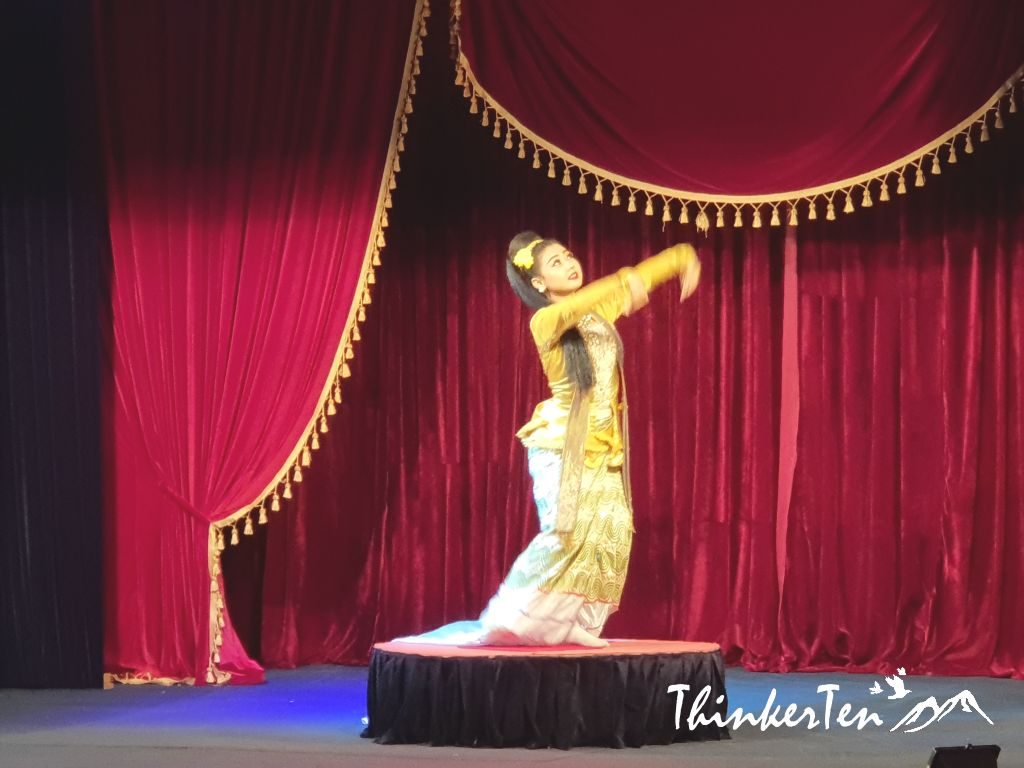 A guy carrying a basket full or sticky rice wrap with banana leaf to the guests. 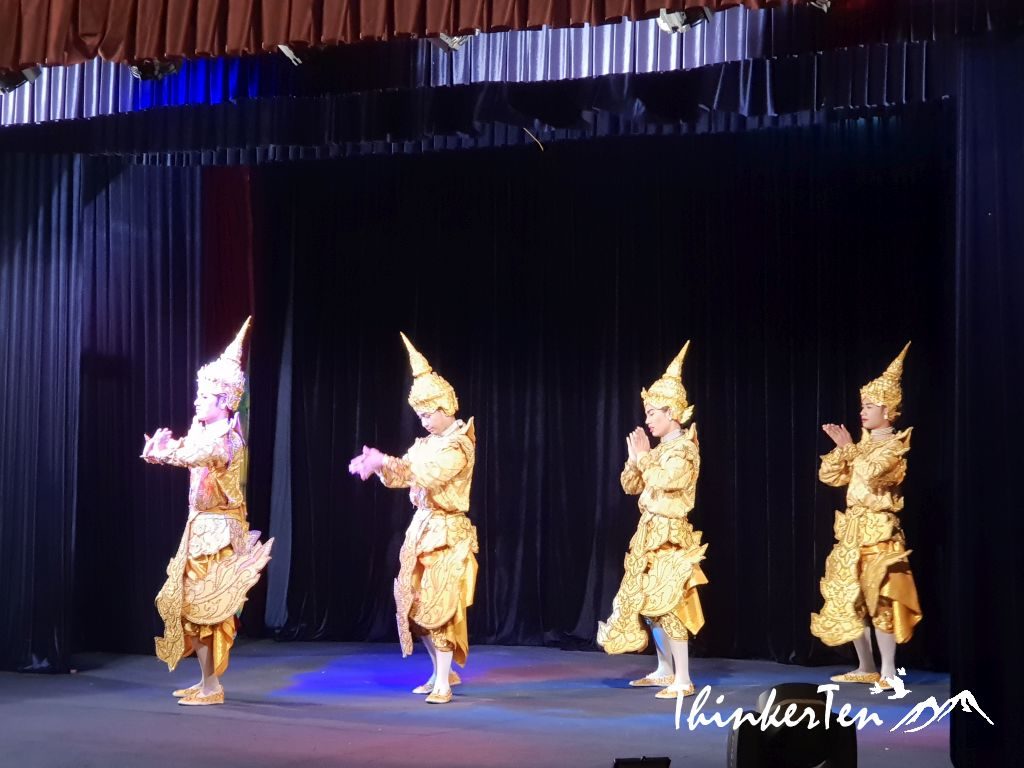 At one point, a huge elephant with bling bling costume make an entrance from the door at the dining hall, walk to the guests dining table and walk up the stage and did the funny shaking mood.  As if the elephant has been injected with “ice drug”. 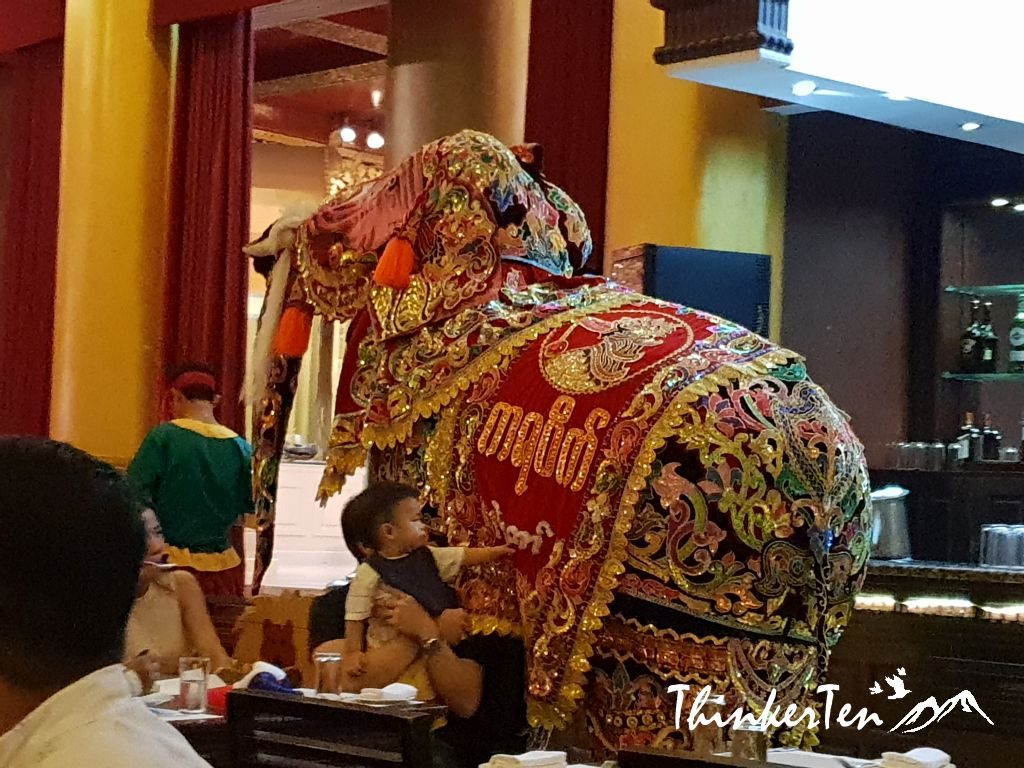 Colorful bling bling elephant with the shaking move as if possessed by a Demon. 🙂 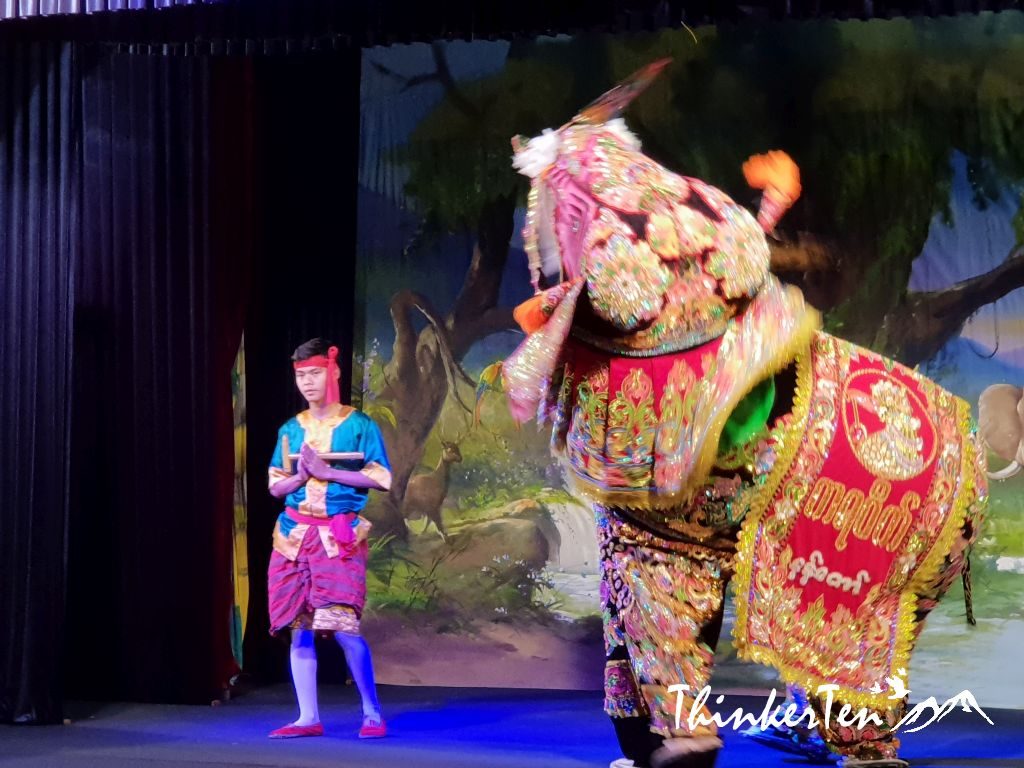 The unusual thing about the Myanmar puppet dance is one of the dancer in the picture is not a puppet but a real human who copied from the puppets dance move.

How to go Karaweik Palace

If you are catching a taxi to Karaweik palace, you need to pay a little entrance fees for the car to bring you in to the Lake & Palace, which cost about 300 kyat (USD$0.30). The international buffet plus cultural show cost USD$30.00. Is it worth to go? Well, it depends. If you like luxury buffet spread and clean environment to dine and some taste of Myanmar culture, go for it. Another option is you can just visit the Karaweik Palace for free and exclude the fine dining and culture show , photography from the outside. Plenty of photo opportunity. 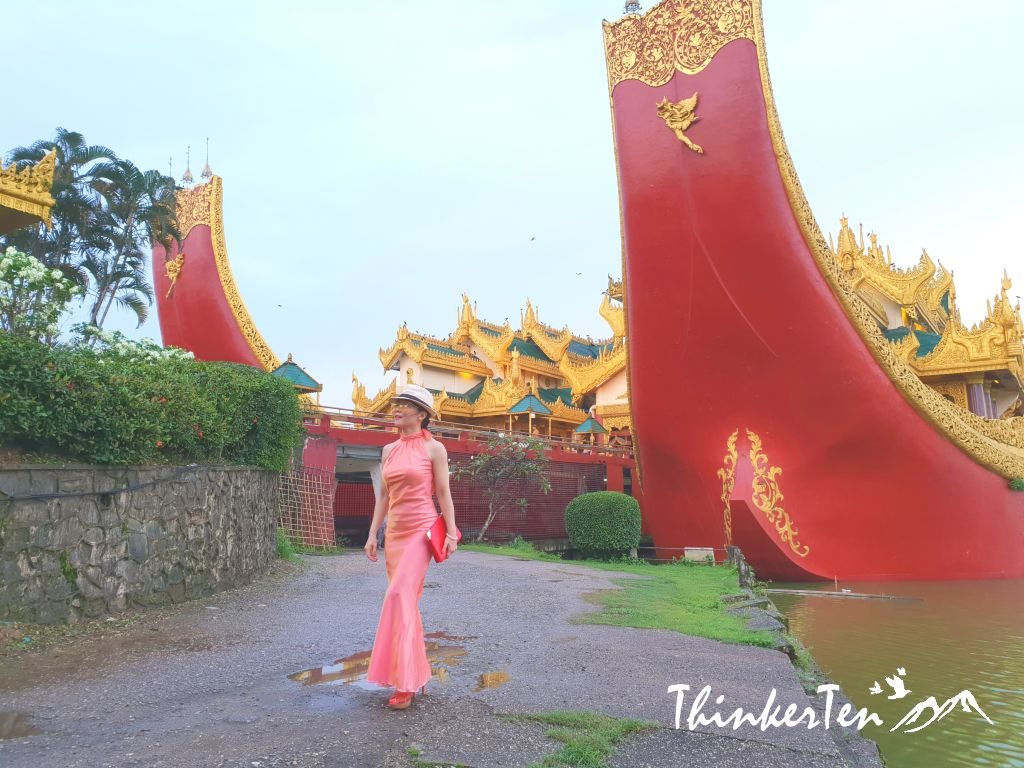 I am still happy to have dine at the Karaweik Palace as the food not are only including international buffet but also a whole range of Burmese traditional food. I have a weak stomach so I can’t taste local street food which is quite ashamed but good thing I can try them here. The cultural show was not the best as the dancers quality aren’t great but it still depict Myanmar traditional art, musics and dances from different tribes across the country.

Myanmar : St. Mary’s Cathedral, a little oasis in the heart of Yangon.

This place looks amazing! Wish I could visit! Maybe I’ll add it to my bucket list of places to visit once the kids are grown up!

Great idea to wait for few more years when the tourism get even more developed in Myanmar. It is still ver far behind compared to Vietnam tourism.

What a shame that this experience wasn’t a top one. I love the palace, it looks so majestic and also very colorful! I like the idea of having different ethnic groups giving you their traditional snack at the entrance. However, the buffet is disappointing. I think at least they could have done was hire a good chef and create a degustation menu with traditional food from Myanmar.

The colors are all so beautiful, and the food looks good, but not great, buffet is never my favorite. It may be something worth still seeing though in the area.

Buffet is never my favorite as I dont prefer to eat until I can’t move my body. However the buffet here is good considering I can’t take street food in Myanmar due to weak stomach. The food is worth to try out as there are plenty of variety. The palace is beautiful but the performance are just not meeting up with my standard. I guess they need to have more classes to train those dancers into more professional.

Wow this looks like an absolutely amazing place to go and have something to eat and watch the amazing show taking place. I am sure for many it is a once in a lifetime experience that will never be forgotten.

Dear Sarah,
It certainly once in a life time to have dine in the Palace.

I would LOVE To do something like this. I enjoy eating, and I love learning about new cultures, so this is perfect.

This is just perfect for you if you love food and enjoy culture but the performance was not up to standard, similar to high school standard. LOL. Well, at least the food is quite good, full ranges of variety and clean and nice ambient. After all, you dine in the palace, I shouldnt complain too much. 🙂

I would totally enjoy a trip like this, the food and the architecture of the buildings is so beautiful.

Dear Monidipa,
The palace building look stunning as it was built in the water. The shape of the palace look like a boat floating in the lake but its actually not moving.

Wow. Your pictures literally took me there. The Palace, architecture …. everything looks awesome.

Wow! Looks like you had a great experience! Would love to try this out too when I visit Myanmar!

Wow these pictures are amazing. The colors there are so inviting and bright. I love learning about new cultures! Would love to visit there one day.

love the all pics….nicely written specially about the cultural program….thanks

Looks amazing! I love all the colours in the pictures 🙂

What an amazing place to travel! Your pictures are awesome. Thank you for sharing!

I agree that the gold are red are striking colors. I am always up to dining at classy restaurants and we love international buffets.

Myanmar looks like such a beautiful country! I have wanted to visit for such a long time. It looks like you had an incredible holiday!

This looks like it would be an amazing experience. I would love the chance to go there one day.

Thanks for your comments.

I have always wanted to visit Myanmar! This would be the perfect place to visit with the children and learn about the local culture and cuisine! Such a majestic country! Thank you so much for sharing this post!

Myanmar is still very cheap to travel as compare to the neighboring countries such as Thailand and Vietnam. However, the country is still very backward and the infrastructure is still lacking.

I love to Myanmar sometime, your pictures gives great insight . I love Burmese cuisine a lot.

I remember trying the mohinga soup, and I wasn’t a big fan it it either. Like you say, it is a traditional dish so I was happy to sample it. I always enjoy the traditional dance and music shows in SEA. The costumes are always exquisite.

I love all the gorgeous photos you incorporated in your post. The palace, as well as the buffet look lovely. I would definitely like to visit and dine there.

the palace and food look amazing. Doubt i’d like the soup though.

Oh wow. Definitely a must place to visit. I’d love to know more about the culture and taste the local food!