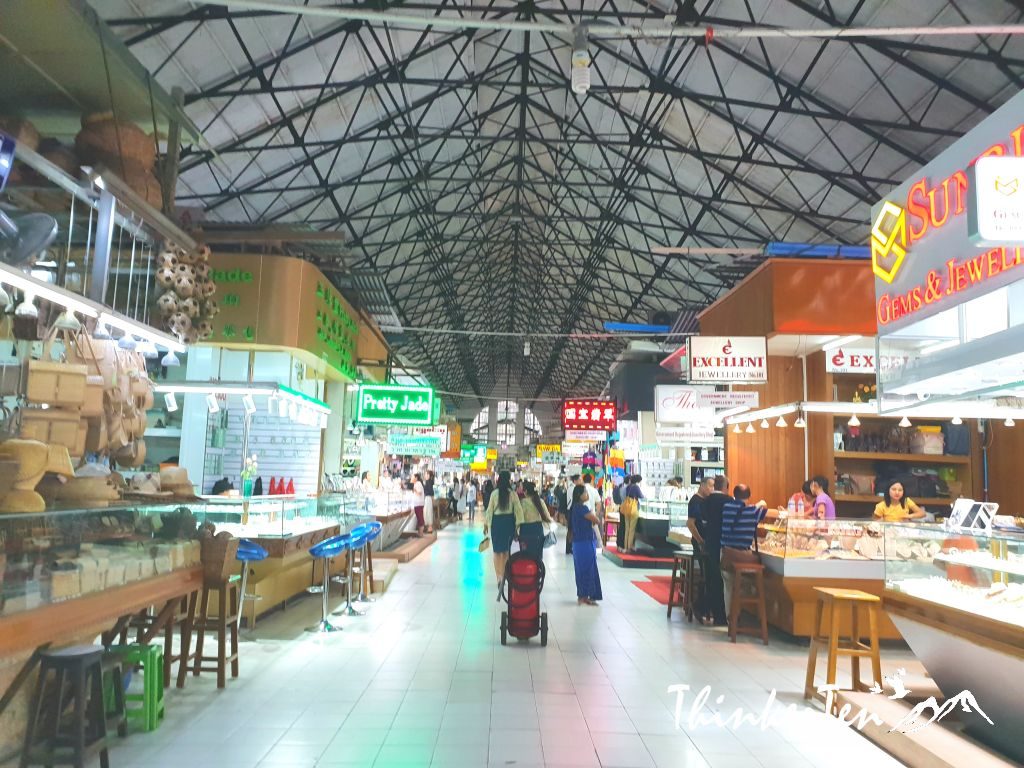 Scott Market is easier to remembered for the foreigner as compared to the other new name called Bogyoke Aug San Market ( named after Aung San Suu Kyi’s father ). This is a big bazaar situated in the heart of Yangon which offer Burmese handicraft and jewellery (Burmese Jade), art galleries, antique, umbrella, bags, shoes and many more.  There are more than 2000 stores here. 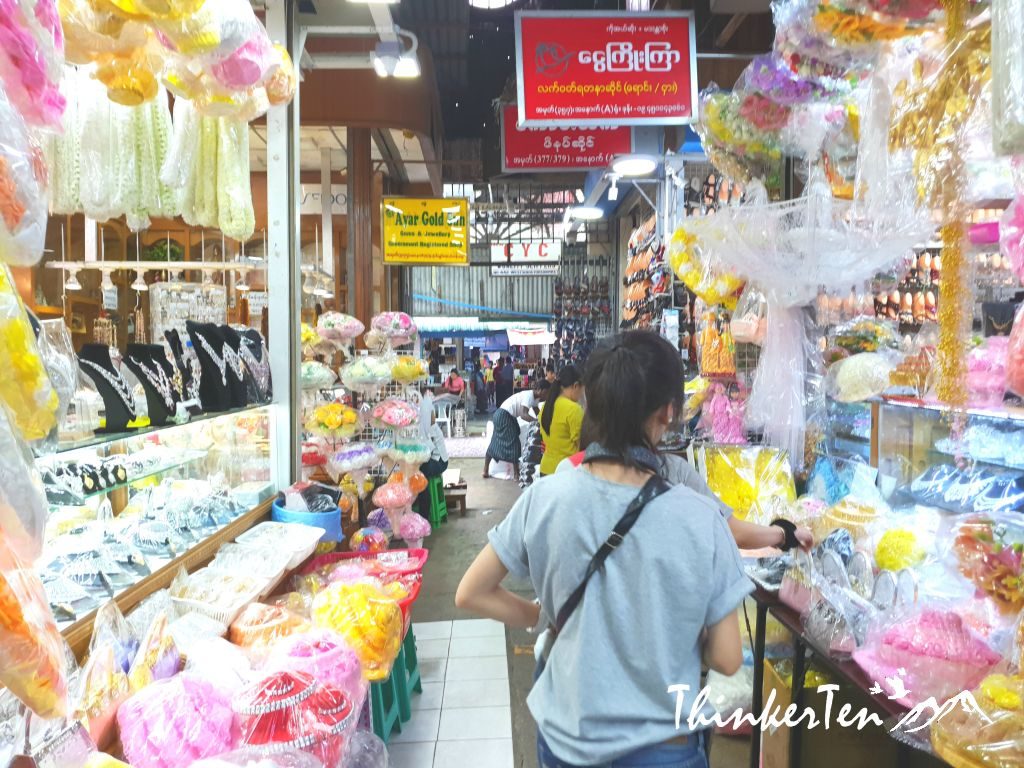 The History of the Market

The market was constructed during British colonization back in 1926 and they named it after a British guy named Gavin Scott who is the Municipal commissioner in that time. 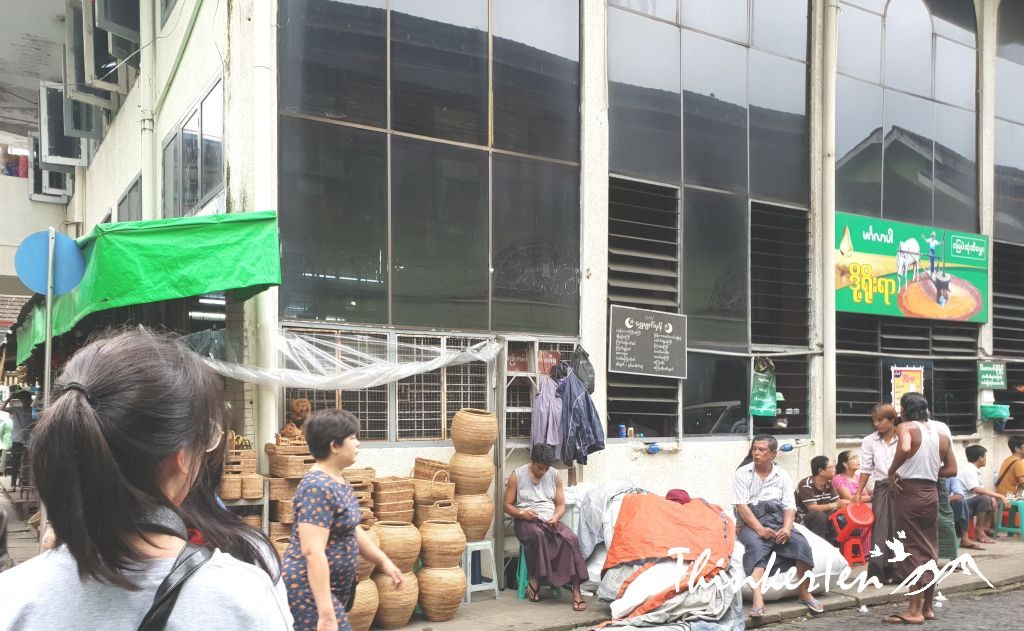 Get your “longyi” here!

Scott Market is a great place to get some ‘Longyi” or we call it “sarong”, the cloth that wrap around your waist. These are useful when you entering to the temple pagoda complex as all temple pagodas in Myanmar do not allow shorts and sleeveless.  Women’s longyi usually are very colorful and with floral print while men’s longyi are more simple and dull color and stripes or checks print. 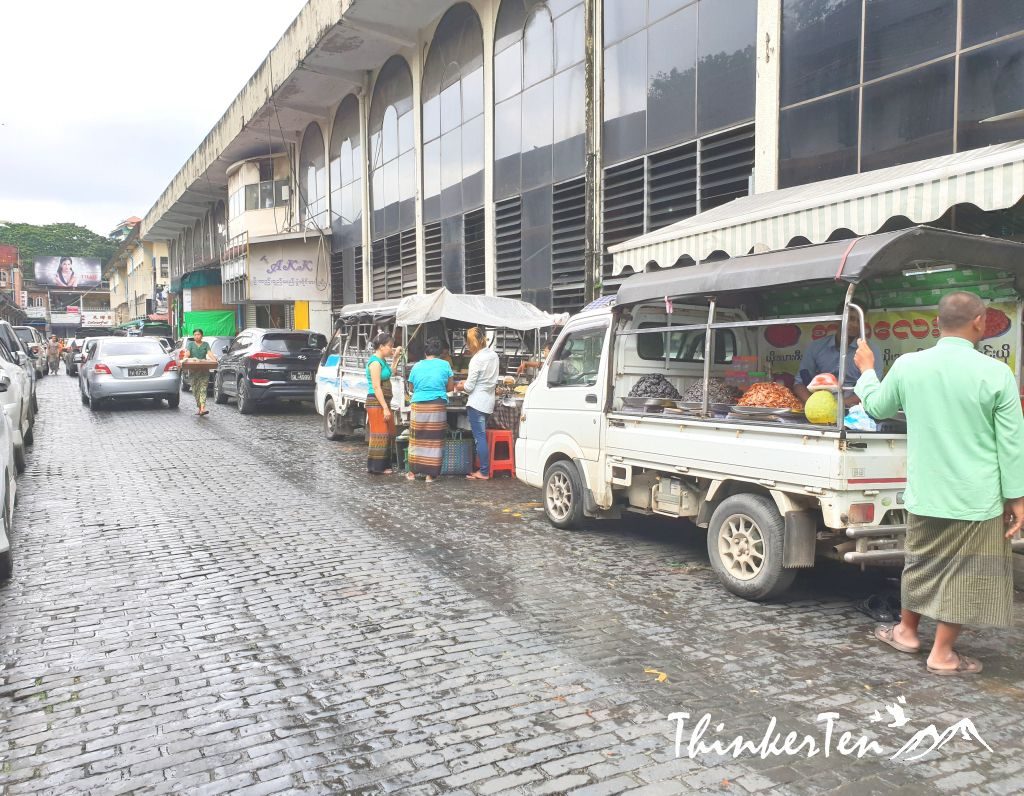 You also find many tailor shops where you are able to tailor-made a set of traditional Myanmar costume and bring home. Burmese women wear their traditional costume regularly in daily life which is quite bizarre to see it when I just arrived. Unlike Kimono from Japan and Hanbok from Korea, which is only wore on weddings and other special event.

The Pathein Burmese umbrella is one of Myanmar’s traditional product to bring home. The Pathein umbrella was first made in the city called Pathein which is 5 hours away from Yangon. There are available in several colors; orange, blue, red, pink, yellow and I bought the green home (USD $5.00 – $6.00). You can also pick the sizes too, small, medium and large. 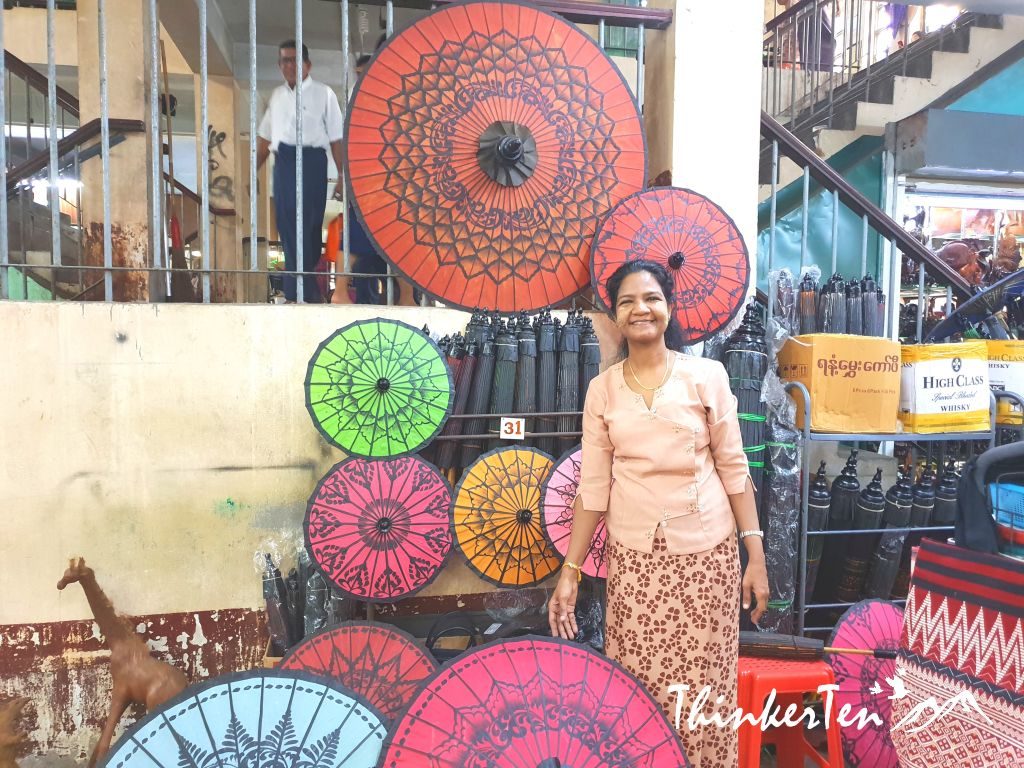 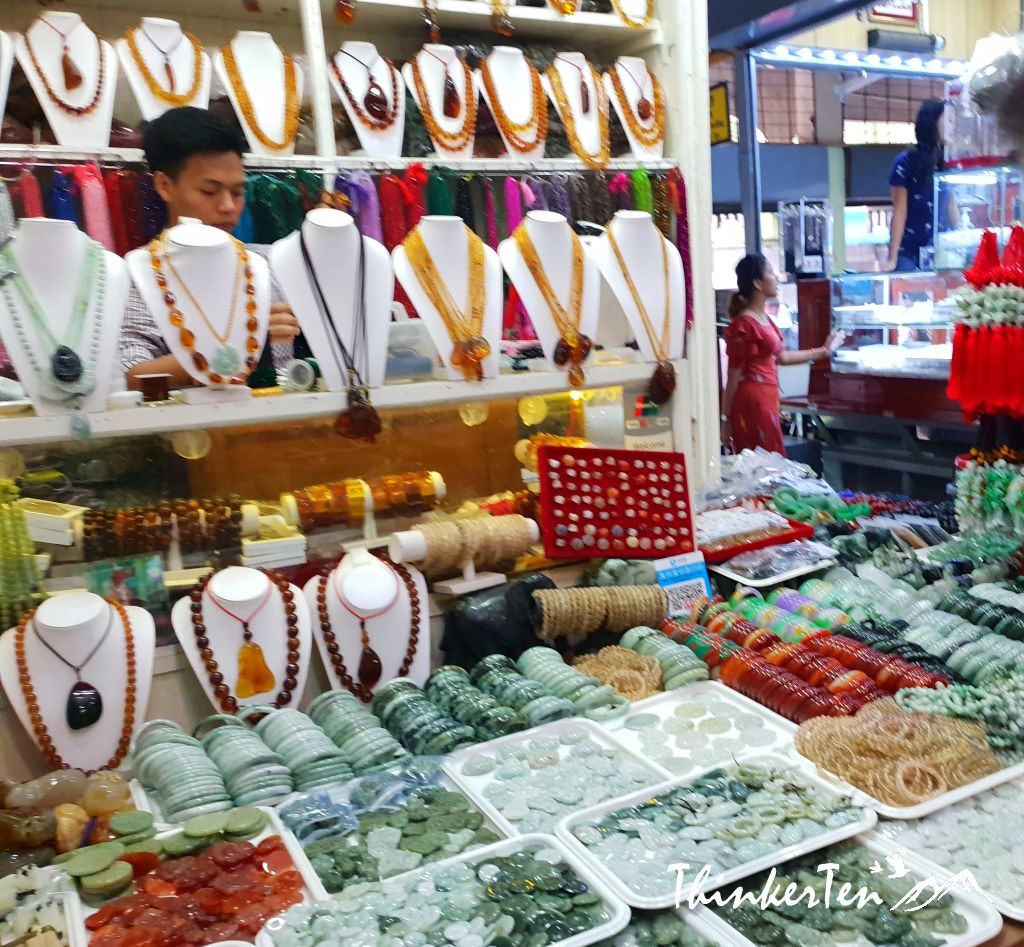 The Scott Market also use to be a place for the black market money exchanges but now you see more shops that sell jade, rubbies and other gemstones which come from the local mines, mostly from Mogok city in Mandalay region.  For many centuries, Myanmar is one of the important gem centers in the world. 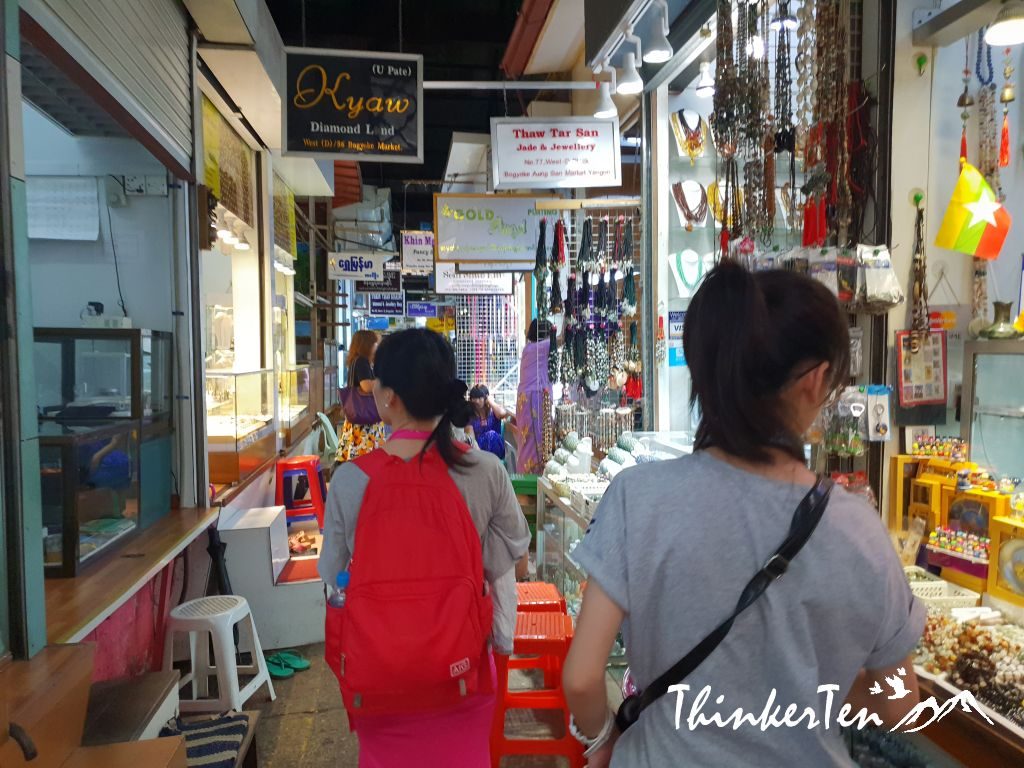 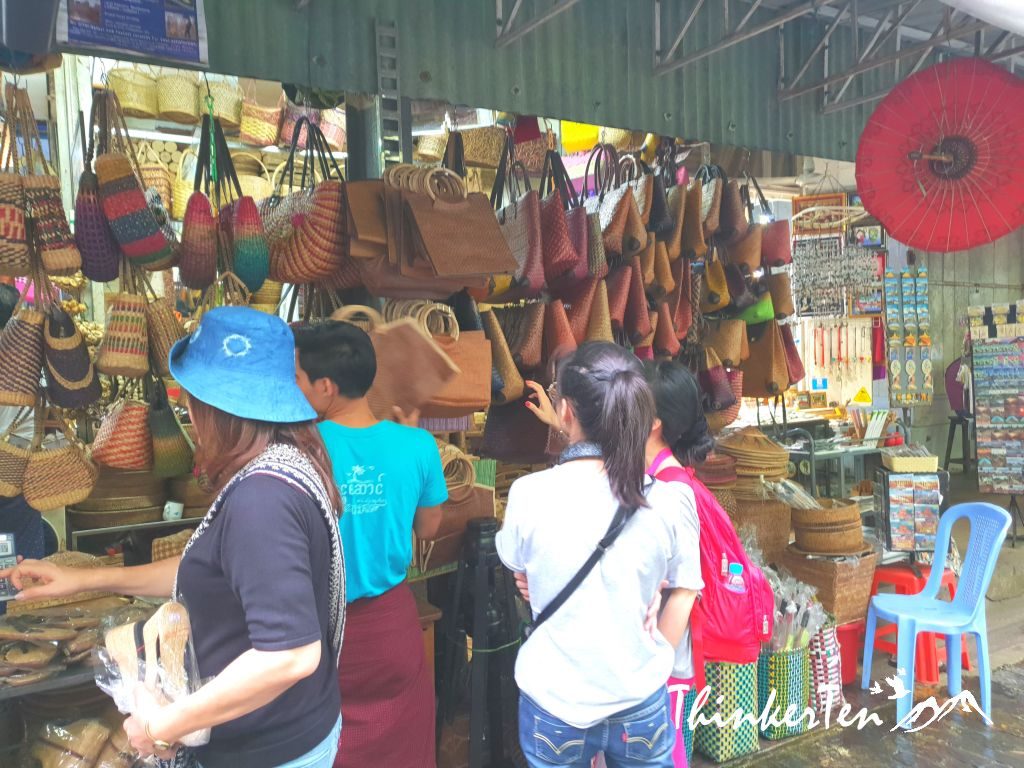 It is called “Hnyat-phanat” in the local language and look similar to any flip-flops. I see almost everyone in Myanmar wear slippers and not many wearing shoes. The colorful velvet sandals are traditionally worn at formal occasions such as weddings.

Opposite Scott Market there are modern shopping center too. 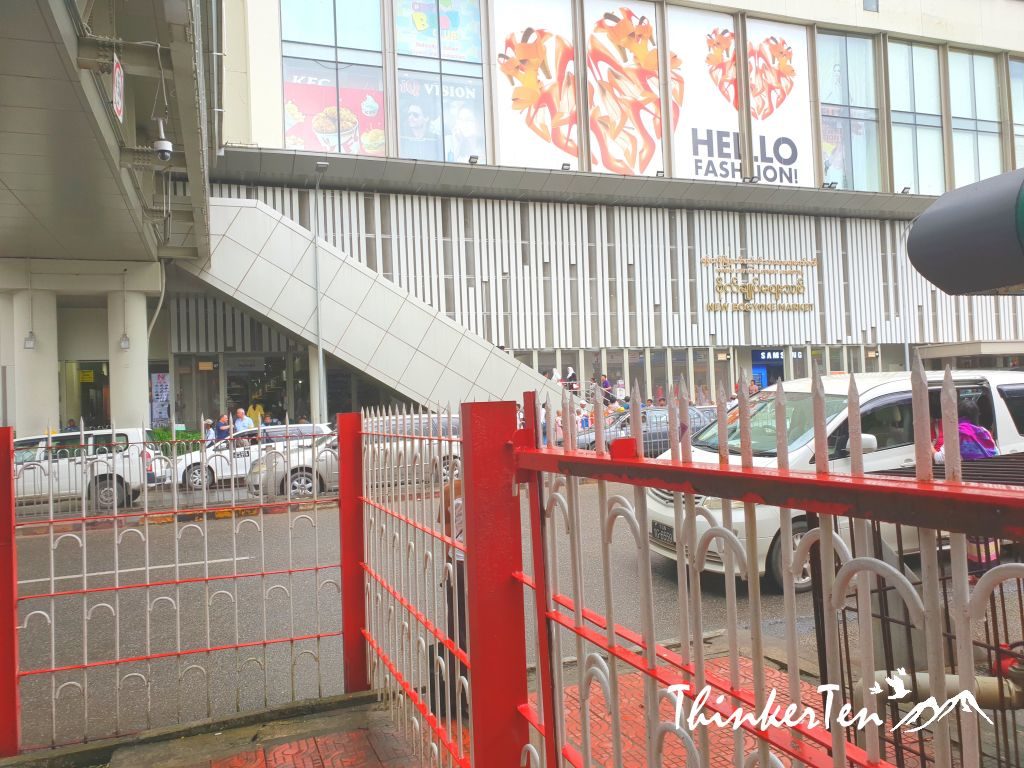 Scott Market is for both tourists and locals but when they know you are tourists, the price are different and few times higher. I noticed most product do not have a price tag and you need to ask the seller.  Once you asked, they will know you are not a local. My advice is bargain first before you pay.  If you know nothing about gem stones, best is not to buy any. An hour or two is enough to explore Scott Market, after all shops are repetitive.

That looks like so much fun! I love to visit huge open air shops like this when I travel. They’re the best way to find the really cool stuff a city has to offer.

You are right, these are great place to find little trinkets you like to bring home for friends and relatives. However, some shops are targeting at foreigner tourist and waiting to sell them with tripple or more than the usual price. I saw a $3.00 bracelet selling at souvenirs shop at Chauk-htat-gyi, Yangon Reclingin Buddha but over here at Scott Market, the price can go up to $20.00!

I love a good market 🙂 Such a fun experience! I have never been very good when it comes to bargaining though.. I will have to work on this skill 🙂

I know westerner usually dont bargain and is part of your culture that you dont as it may insult the seller and may make him/her angry. For Asian culture, bargain is part of the process when you do your shopping in South east country. However don’t bargain in Japan and Singapore, all things have fixed price and if you bargain, the seller may chase you away from their shops.

The markets over there look like so much fun! What a fun experience touring through there.

Scott Market is the place to get your souvenirs in Myanmar as it has everything you could find here. Do remember to bargain if you want to buy something as they usually raise up the price when they know you are a tourist.

That looks like so much fun! I can’t believe there are over 2,000 shops! Thanks for the tip about bargaining, I never know if I will offend someone if I do.

I think I’d love to browse around the stalls. Those umbrellas are gorgeous and the necklaces. However I’d be worried to buy anything in case I wasn’t bargaining hard enough.

The “Pathein” Burmese Umbrella is one of the icon in Myanmar which I strongly getting one. Another item worth buying is the longyi – the cloth that wrap around on your waist. If you just buy little item like so thre is no much of an impact to your damage on your wallet because these thing don’t cost that much. Just stay away from gem stones if you know nothing about.

It sounds like there are so many great options here. I’d really like to see the gems, but they’d know quickly that I’m not a local!

Haha, that’s true. Thats is what I do just looking at the beautiful gem stones as I know nothing about them. I dont want to end up being cheated.

That is look so fun and a great travel experience that you will enjoy the place..

No visit to any city would be complete without a trip to the local marketplace. Sometimes though, these places can be pretty crowded and the vendors a bit pushy, but if you can stand your ground and not be intimidated, you can find so many wonderful gems. Looks like this market is no exception.

I enjoy the opportunity to shop in the local areas when traveling. It always seems to have more authentic items.

Those are some very lively markets! I sure would love to experience this.

So many shops omg! Thanks for bargaining tip I would never have thought of it!

wow this was an interesting read. i would have to visit every shop!

I have never been there but definitely a nice place to add to my bucket list it looks really a pretty place to visit.

This lools like a fun market to visit. I have never been in this place but will defiitely go here when I get back in myanmar.

Seems like a real cool place to visit with a to. Of cultural flavor. The tailor made place and the umbrella shop would be a total fun place for me.

My favorite thing about blogging is this. You can travel, same with books but in a more real view.

I like to share my exprerience and help other to understand the joy of travel. There are so many things to learn through travel. Not only I learn about others cultures but I have a better understanding of my roots as well.

Yangon Scott Market looks like a fabulous place to pick up trinkets and gift items for friends and family. I will definitely remember to bargain 🙂

You are right, hope you will enjoy bargaining.

This sounds like an awesome place to travel to! Thanks for the advice!

Omg this looks like one amazing market!!! I would love to check it out for myself one day!

If I ever visit there, I bet I will visit every sop there…

I love visiting local markets when I visit a country and also have some prior information about the prices as they always increase prices for tourists!

This market seems so busy and fun to visit x