This is my third time of doing self-drive in Japan, the first is to Kyushu Island covering all the seven prefectures, the second visit was to Central Japan region including the famous Shirakawa Go and now my third self-drive in Japan; to Kansai, Shikoku and Chugoku region.

I love to travel by the rental car and do road trips in Japan, especially to remote places where you can find lots of hidden gems and also a cheaper way of travel if you have a group of 4. You see the thing is, many people think driving in Japan is hard, they can’t speak the languages or read the words in the signboard; they think roads are so narrow. The fact is the signboards are all written in both English and Kanji/Chinese Characters; the roads aren’t narrow especially when you are in the expressway.

One fact you need to know is 90% of the population lives in big cities such as Tokyo, Yokohama and Osaka and not many populations live outside these big cities. Driving is not advisable in those 3 big cities. Over 70% of Japan is covered by mountain so if you drive away from these big cities, there really not that many congestions and so easy to handle. If you have done self-drive in Perth, then I would say it is similar to that.

When you are doing the road trip to Japan with a rental car, you will encounter plenty of rest area along the highway. Visiting the rest area in Japan can be very interesting for both the locals and foreigners. This is because these rest areas are often more than a usual rest area that you see.

First let’s find out some important sign along Japanese expressway. You often saw the sign with PA & SA and with the logo of folk and spoon. Both have fork & spoon mean both offer food. Yes, that’s correct. But, what is the difference between PA & SA?

Below is SA (Service Area) – if you look at the signboard, it indicates a petrol station, fork & spoon. Let’s find out Awaji Rest Area, 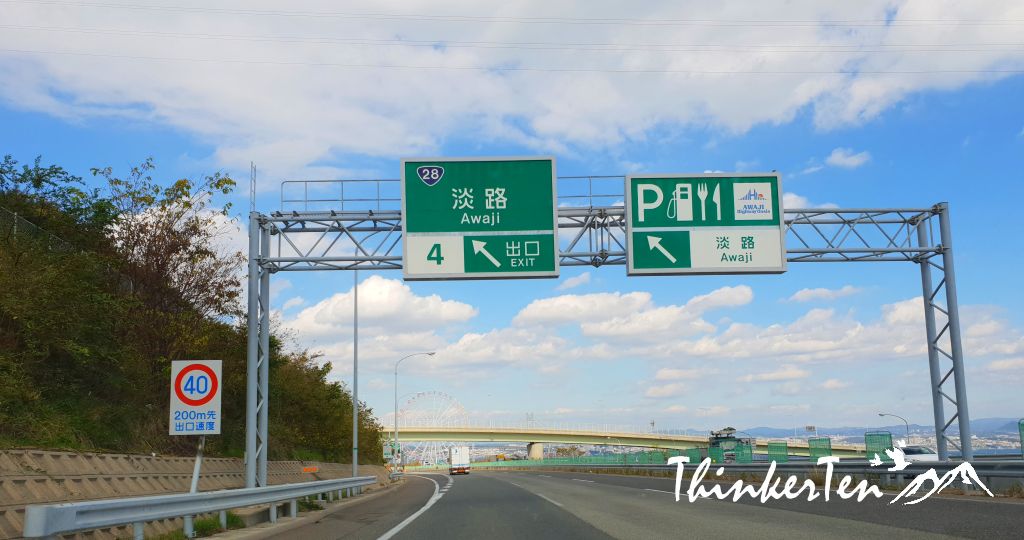 Awaji Rest Area is one of the best stops you could find in Chugoku Region. If you are doing road trips in Shikoku & Chugoku region, coming to Awaji rest area is a must! 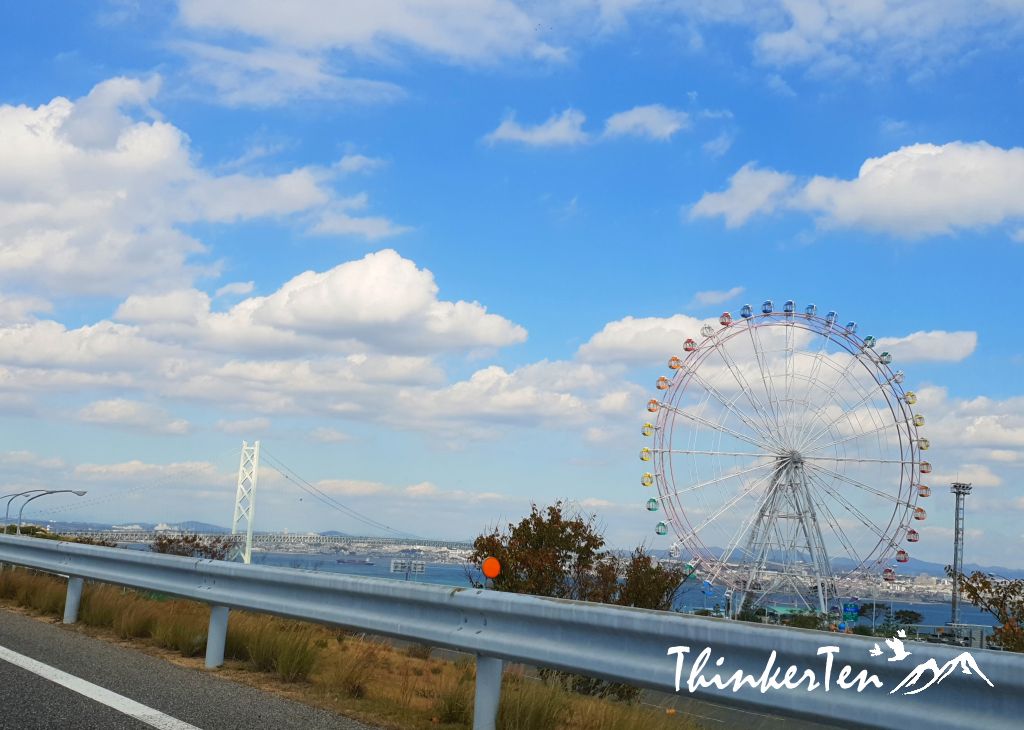 More than a rest area!

Awaji Rest Area is more than a rest area, it has the Ferris wheel overlooking the sea view, shopping, cafe and coolest bathrooms & toilets with advanced features such as heated seat and otohime/sound princess.

The parking area is so big and spacious and cars and trucks park in different spaces.  About 336 parking lot for the small car, 103 for the big truck and 2 for the super long truck trailer. There are also 4 parking lot for disable.  In total, there over car park lots! 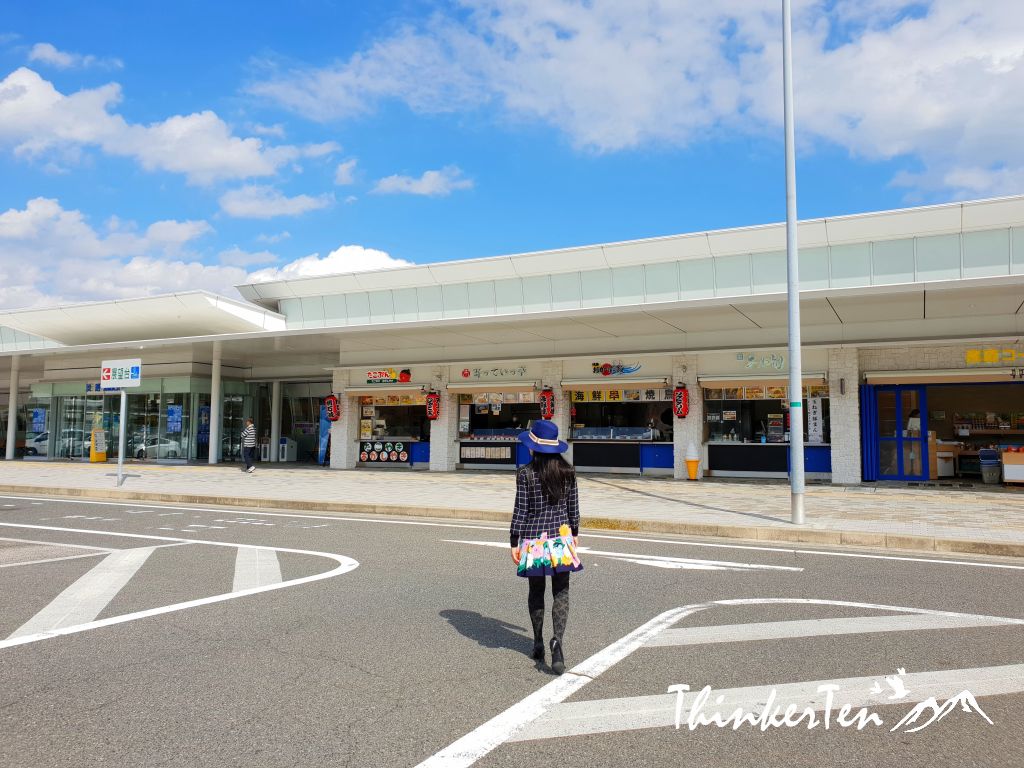 At the entrance of the building for shopping and food, there are the line of vending machines and recycle bins and over 100 toilets for both men and women. 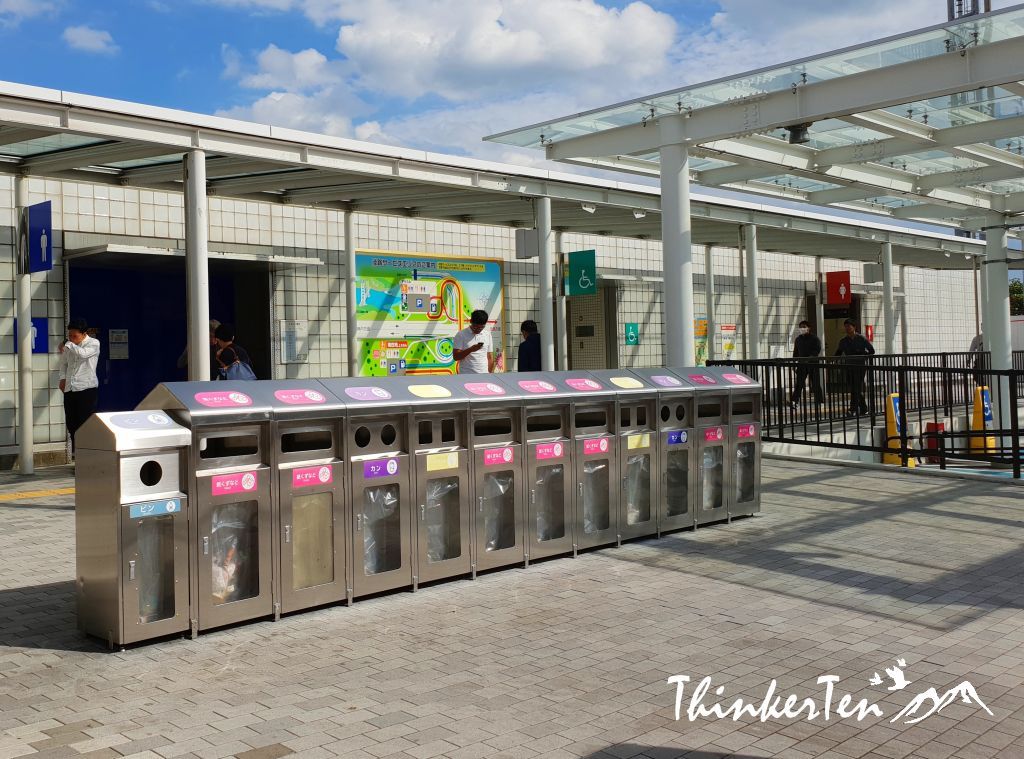 How to use the Toilet in Japan

That’s the cultural difference between China and Japan. Luckily Malaysia and Singapore toilets are the same as Japan and the West. 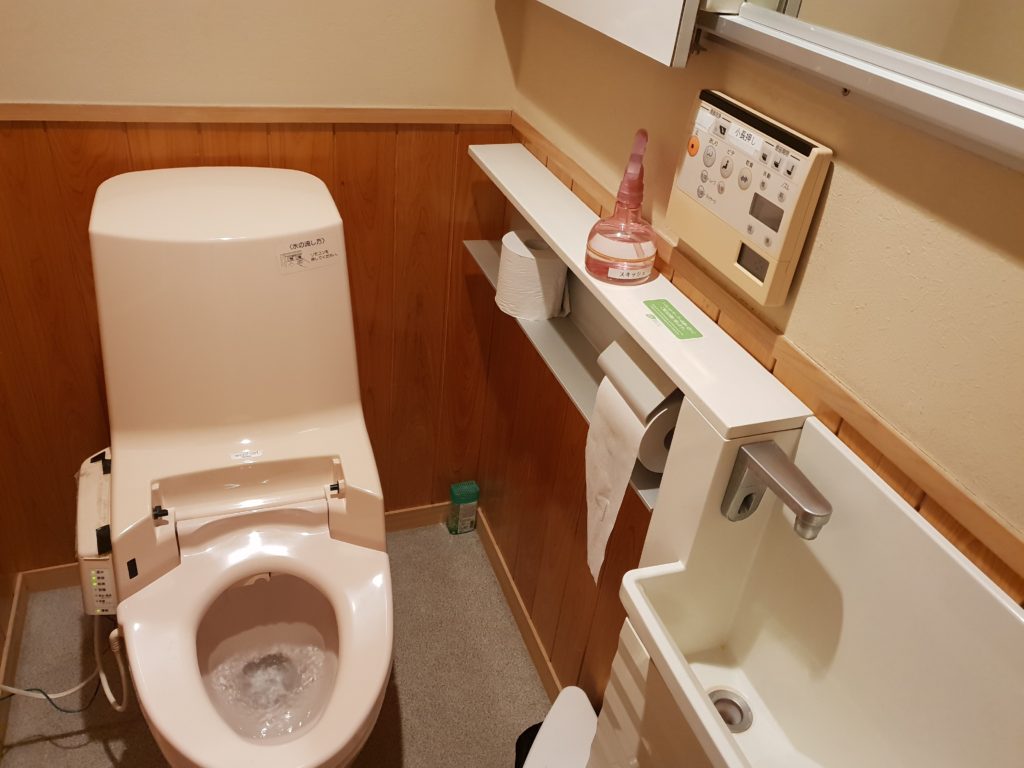 The shopping here sells souvenirs or Japanese called in “omiyage” – usually are food in nice boxes and fancy wrapping paper.  Japanese has this “omiyage” culture where a gift/usually food to give to family, friends or coworkers after coming home from a trip. It is a serious business in Japan and you can’t go empty-handed to the office from a trip.  The indoor shopping is 24 hours. 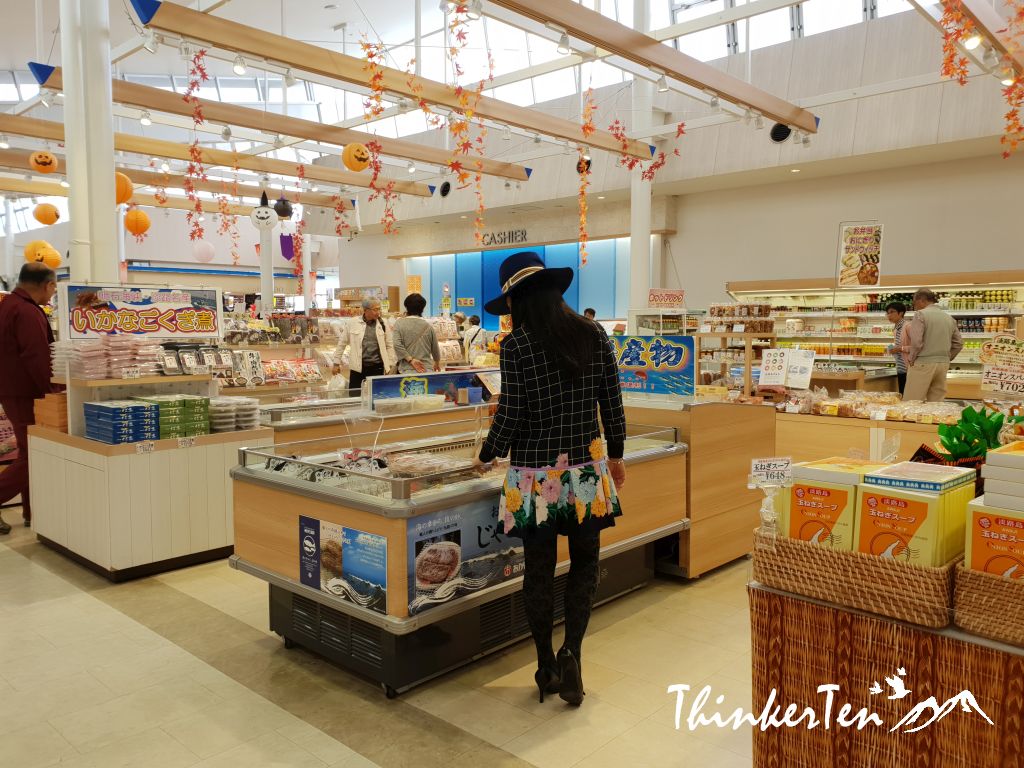 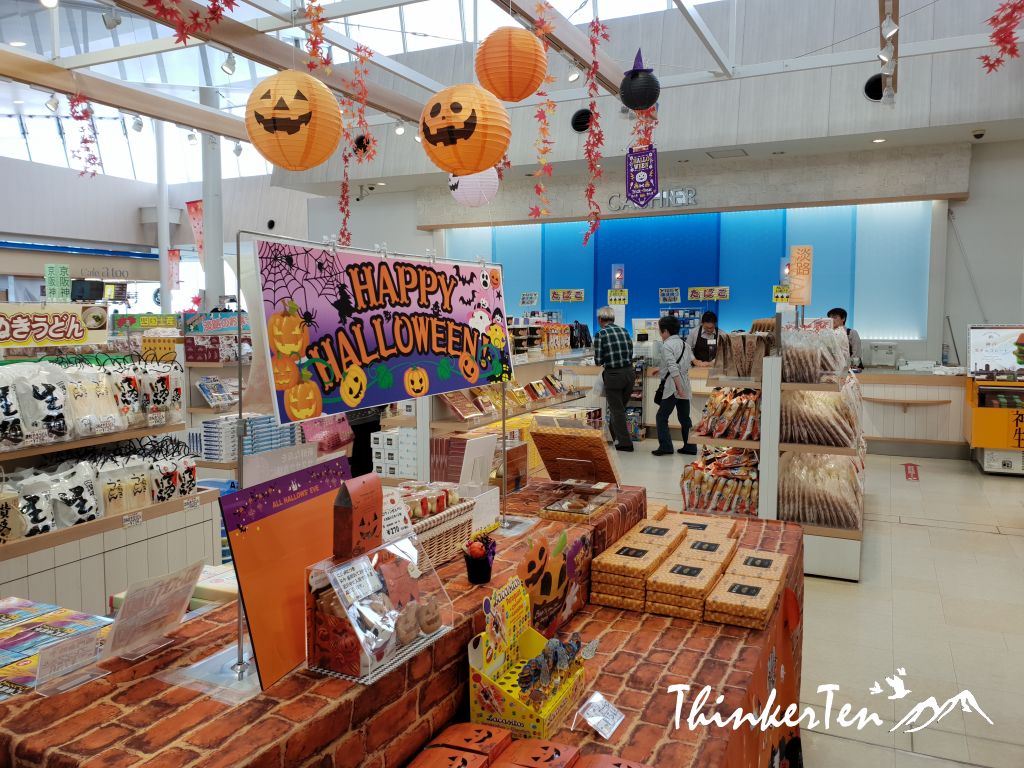 There are several restaurants, cafe and food courts serving a variety of cuisine. 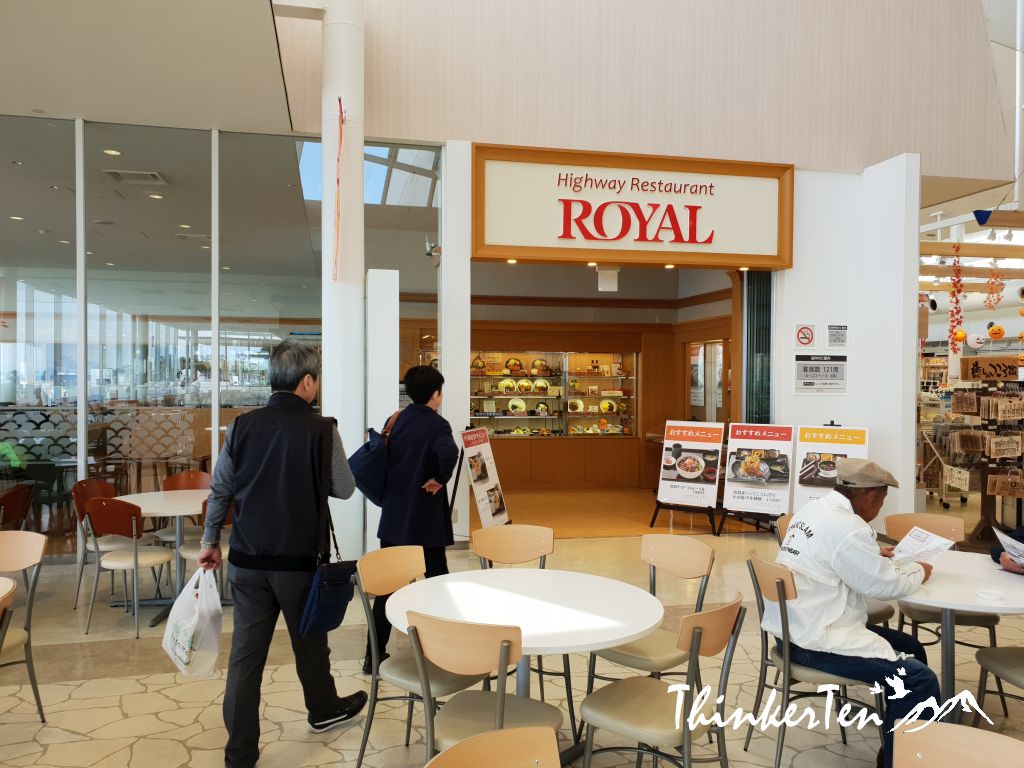 We decided to have noodles. These are the steps to make your order. 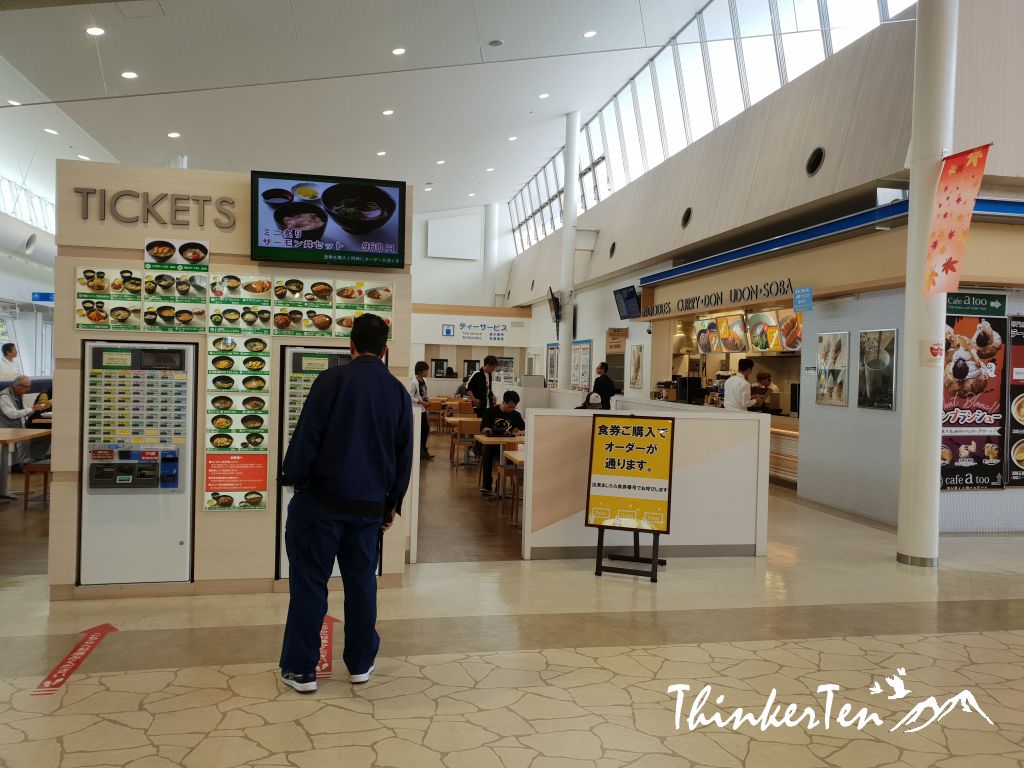 1. Choose your order, there are pictures beside each number.

2. Insert paper notes or coins inside the ordering machine. 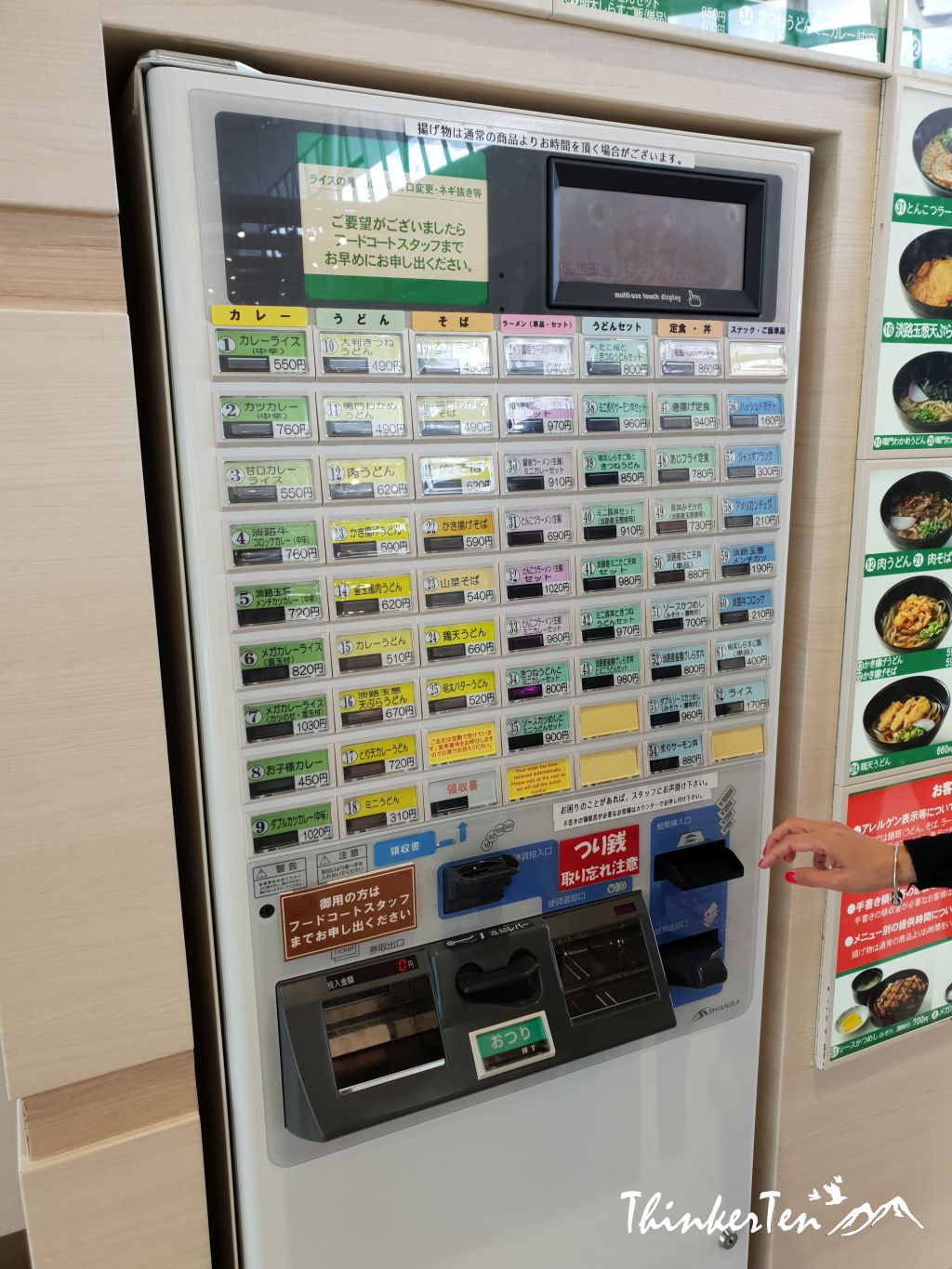 3. Pick up the tickets from the machine and wait for your number to be called. 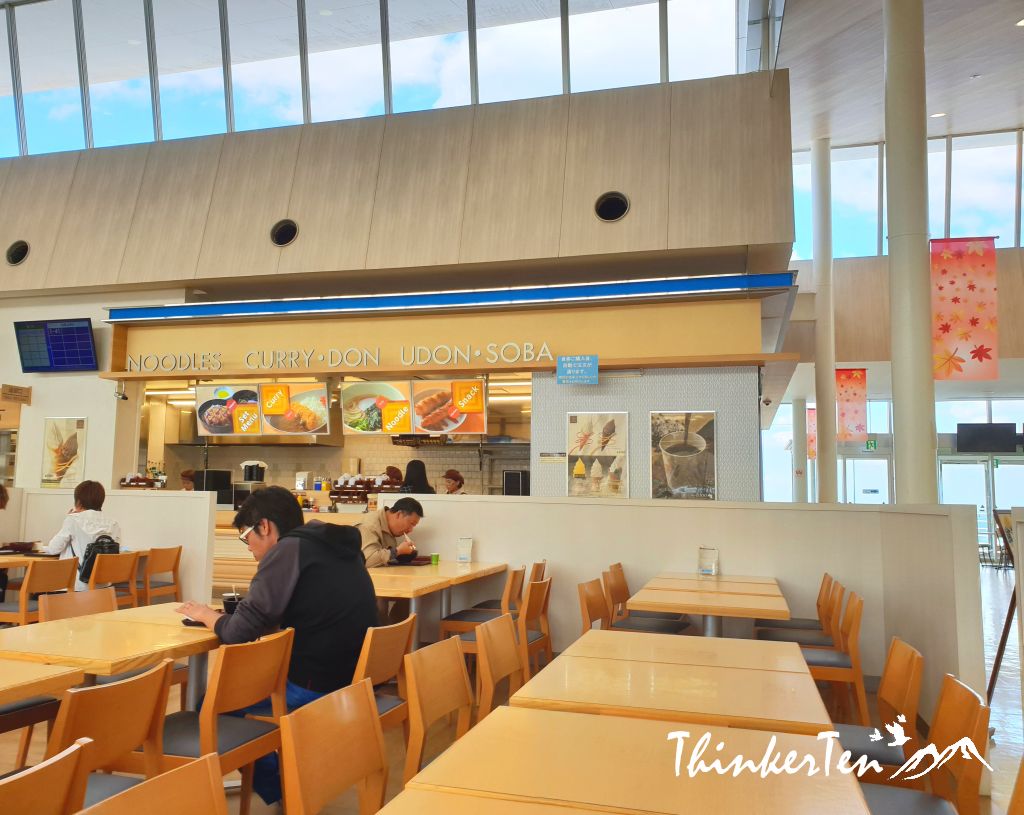 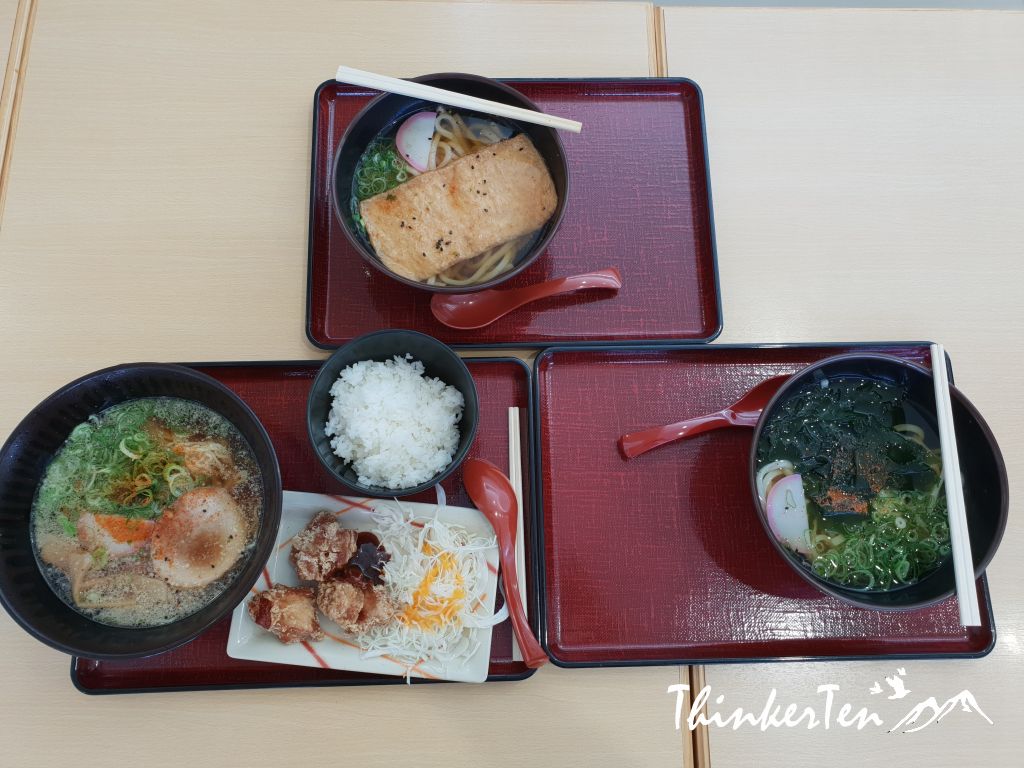 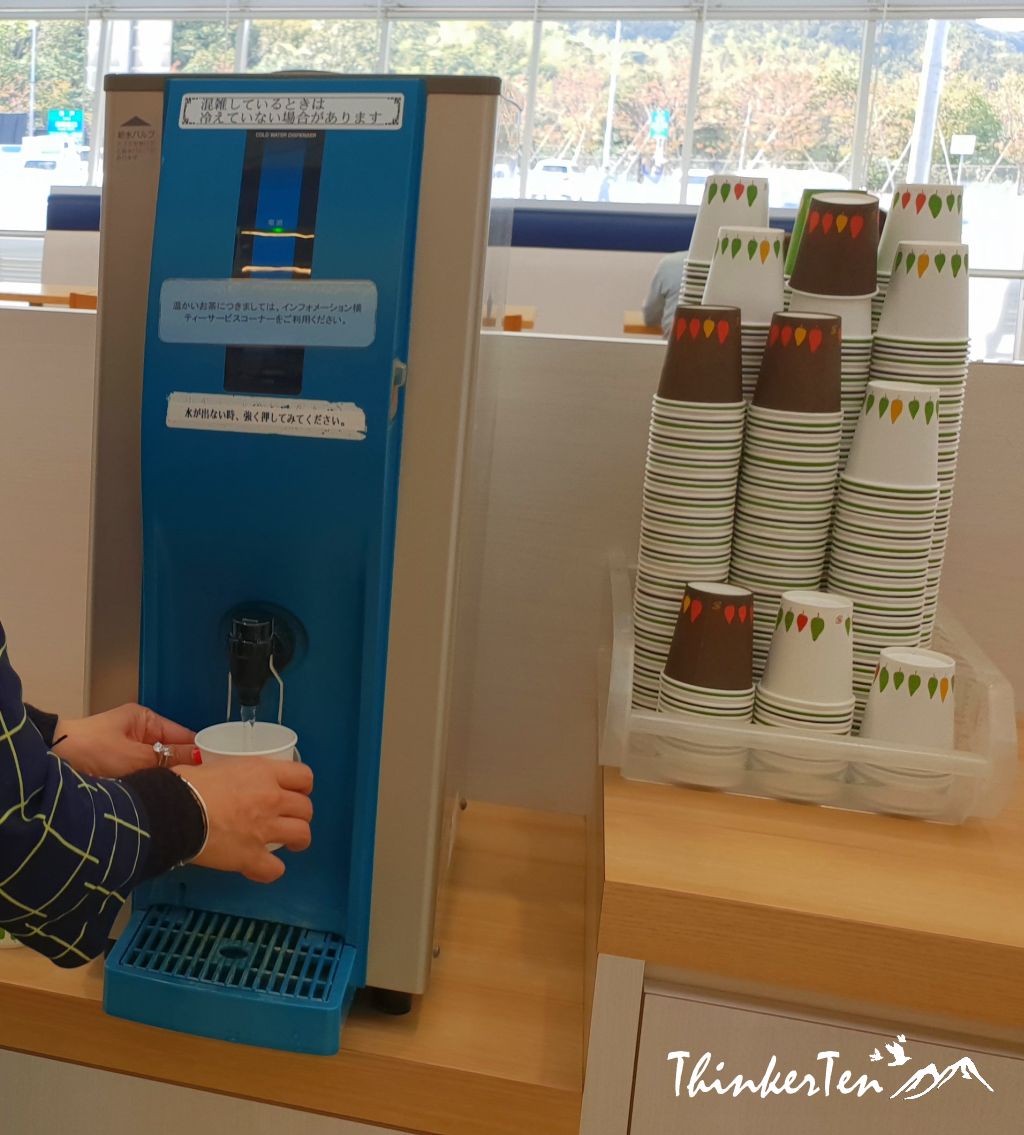 Outside it has a beautiful view with fantastic panorama of the mainland overlooking Kobe and the Akashi Kaikyo Bridge.

Wataru is the bridge’s mascot – you can see there is a car on top of Wataru’s head. 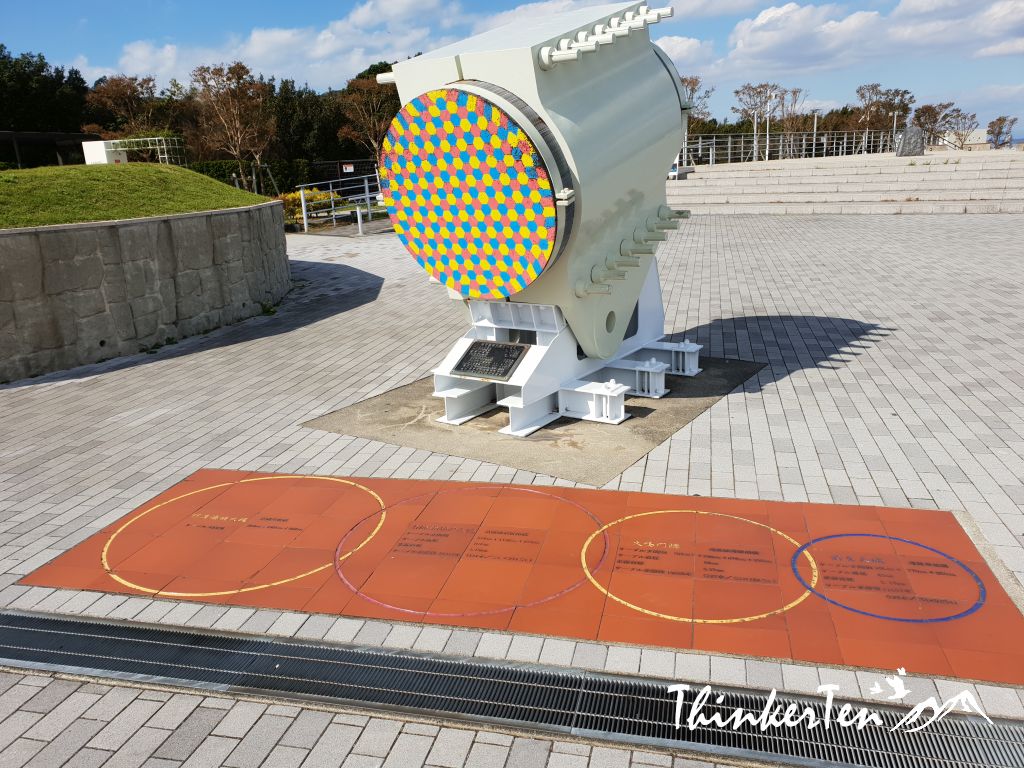 Once we exit Awaji Rest Area, we drove towards the mainland of Honshu passing through the longest bridge in Japan called – Akashi Kaikyo Bridge.  The length of the bridge is almost 2 km connecting Awaji and Kobe. The bridge has a nickname called “Pearl Bridge”. 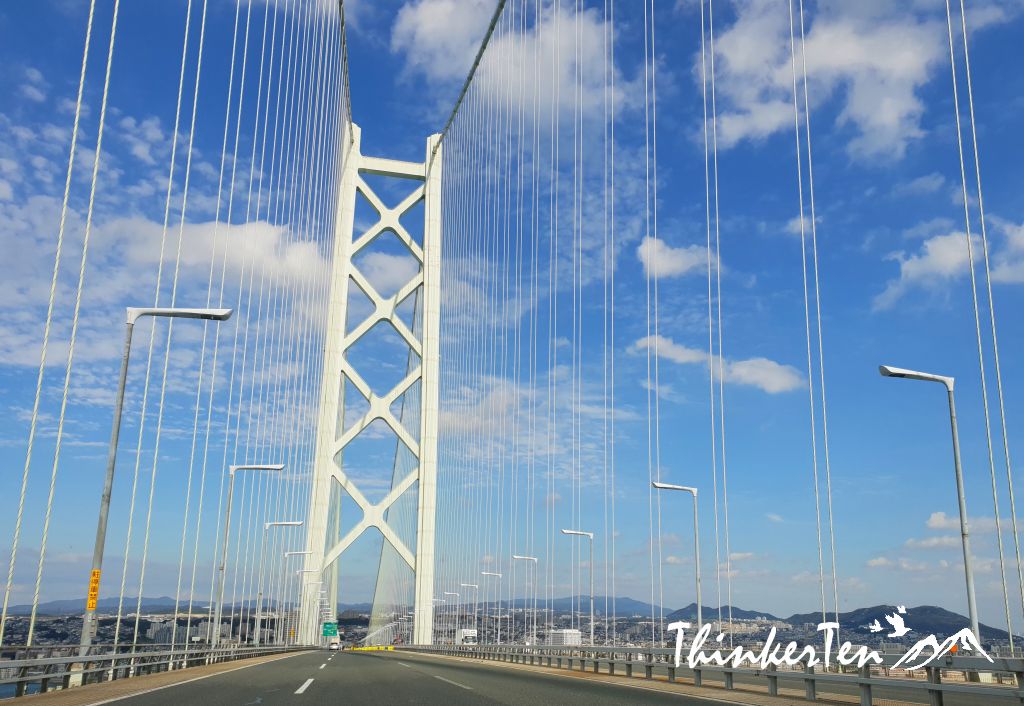 The Akashi Kaikyo Suspension Bridge is designed in such a manner where the earthquakes and harsh sea currents doesn’t damage the bridge. It even survive the big Kobe earthquake on Jan 1995. I was in Japan during the big earthquake! 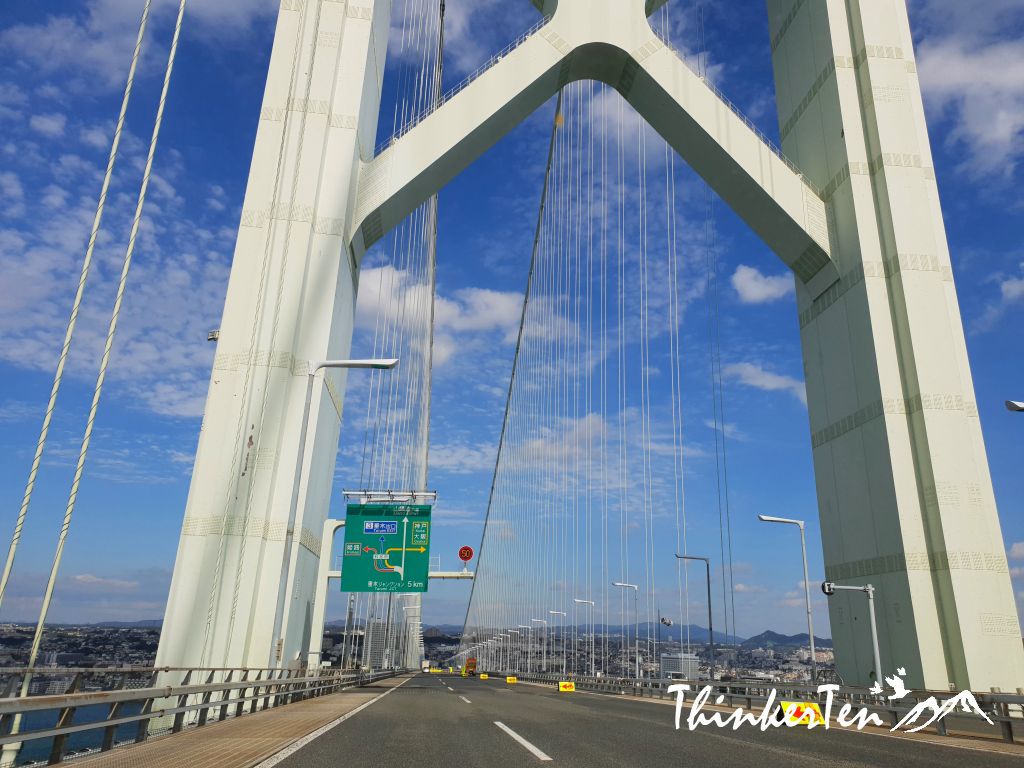 Japan rest area offer more than a toilet break or fill up with petrol. It even have unexpected facilities such as telescopes & Ferris wheels. The Awaji Rest Area is one of the famous rest area that you cannot missed if you are doing a road trip from the mainland to Awaji Shikoku area.

This is so useful! I had no idea about this rest area, and the facilities it has. Thanks for this!

Wow, I’ve never though to road trip around Japan but this article has compelled me to try one day. Your post gave me a comprehensive guide to survive the road trip 🙂

Thanks for your comment. Japan expressway service areas are interesting places to visit.

It seems like an excursion. The place looks so great. Such great captures I must say that and your description is lovely.

Thanks for your comment. I love visiting Japan service area along the expressway. It has more than a normal rest area!

That is quite a rest area! It seems like an excursion in itself! I love renting a car when I travel and exploring off the beaten path too. The freedom of having a car and going where and when you want to is the best!

I totally agree with you, renting a car is one of the best way to see a new places. Road trip with a rental car bring a lot of surprises to me.

I have a confession to make! I’ve never been to Japan and i feel so so bad about it! I’ve been all over europe, North America, South East Asia but never had the opportunity to go to Japan! Soon!!! Thanks a lot for the post.

Hope you will make it to Japan soon. Europe and North America certainly very nice place to explore too.

Wow this looks so fun and like an amazing experience! So fun to take a road trip and find hidden gems 🙂

OMG! It looks so gorgeuous and Scary! The bridge I would faint riding over. Beautiful pictures btw!

The bridge is the longest suspension bridge in the world called Akashi Kaikyo Bridge. It has 6 lanes for vehicles. The bridge took 10 years to complete and survive the big Kobe earthquake 8.5 magnitude.

So excited to read this! We are planning to go to Japan for our honeymoon and this came at the perfect time!

Japan is the perfect place for honeymoon and hope you enjoy your best time there.

I pinned this Japan is on the top of my dream travel list. So you mean to tell me Japan is so amazing their bathrooms are 5 stars on their rest stops. Gotta experience this!

No kidding, the toilets in Japan are 5 stars! If you travel in cold season, the toilet seat is usually heated and very comfortable to sit on especially early in the morning. There are so many advance features and all controlled by button at the control panel. Even opening and closing the toilet are controlled by button. And there is one interesting feature is the “otohime” translate as Sound Princess, what it does, it has a flushing sound if you press it. To avoid embarrassment, as Japanese are so shy to let people know they are doing business in the toilet. The flushing sound is not the real water flushing but instead only sound.

WELL IS AMAZING PLAN TO MAKE SOME IDEA IN MY COUNTRY