Top 20 Things to do in Madrid City Tour, Spain!

Last Christmas I was exploring Spain for about 10 days and Madrid is the first city to start my Spain tour.

Some facts about Madrid, it is the capital of Spain, elegant boulevards, deluxe shopping, museum exhibition, and green parks. The currency in Spain is Euro but you can also swipe your credit cards at the restaurants and retailers in Madrid. The national language is Spanish but there are people who speak English.

The name Madrid comes from the Arabic “magerit” which means places of many streams. It is the third largest city in the Eu, after London and Berlin.

Come, let’s find out things to do in Madrid!

Bullfights are every Sunday during the season from Mid-May until the end of September. Outside the season, you won’t be able to see bullfights. However, you are still able to visit the museum. It is a great place to learn about the iconic tradition and one of the defining cultural characteristics in this Iberian nation.

Since I was visiting Ronda a few days later so I didn’t visit this bullring but bullring in Ronda instead. 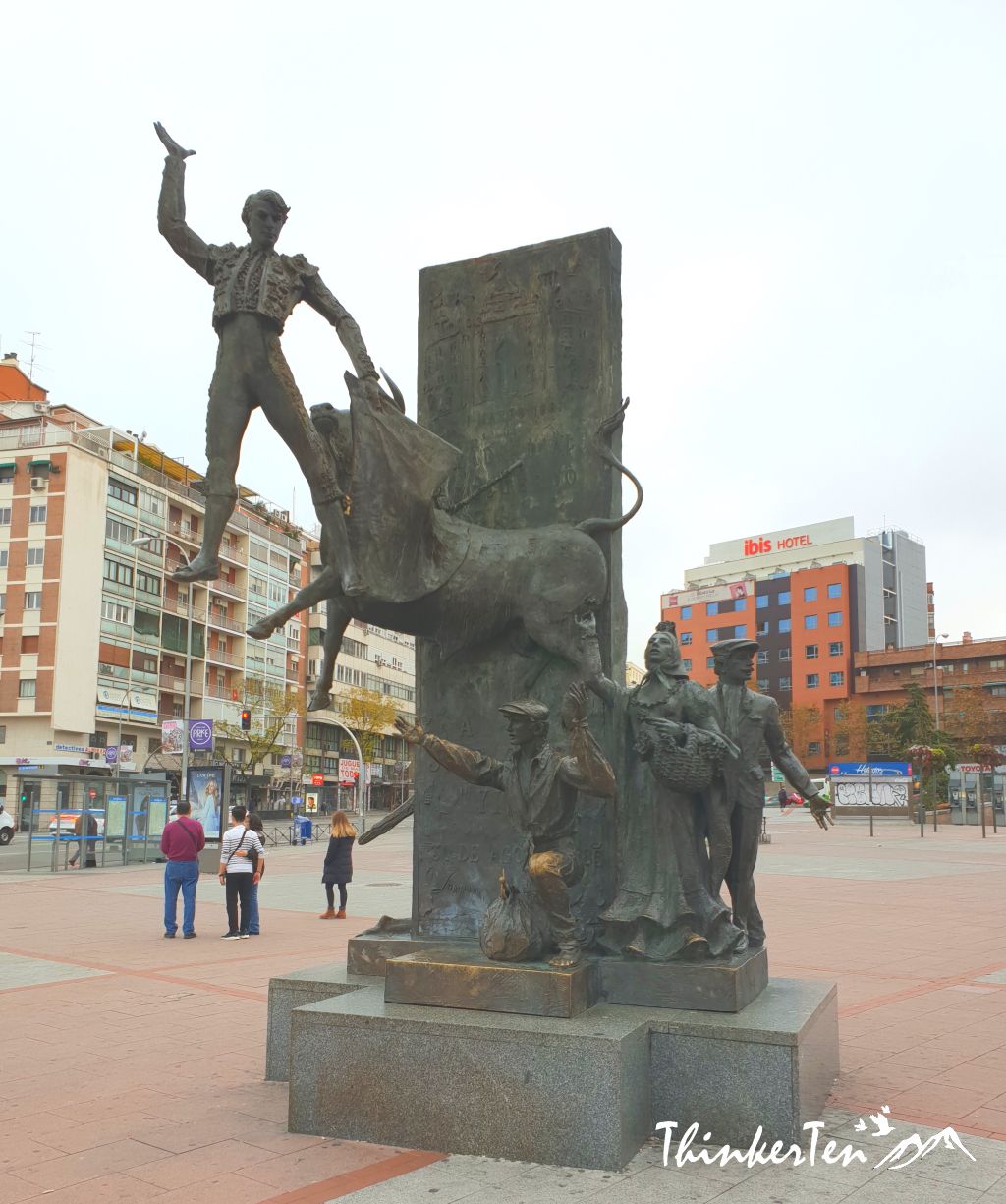 It is called Plaza de Toros de Las Ventas bullring or just Ventas Bullring. It has a seating capacity of 25k seats and the largest bullring in Spain.  The architecture is quite impressive formed of red brick all over.  Do check out the bullfighting statues outside the building.  Also look carefully, there are Muslim elements/Moorish style in the architecture and has some resemblance of the mosque. 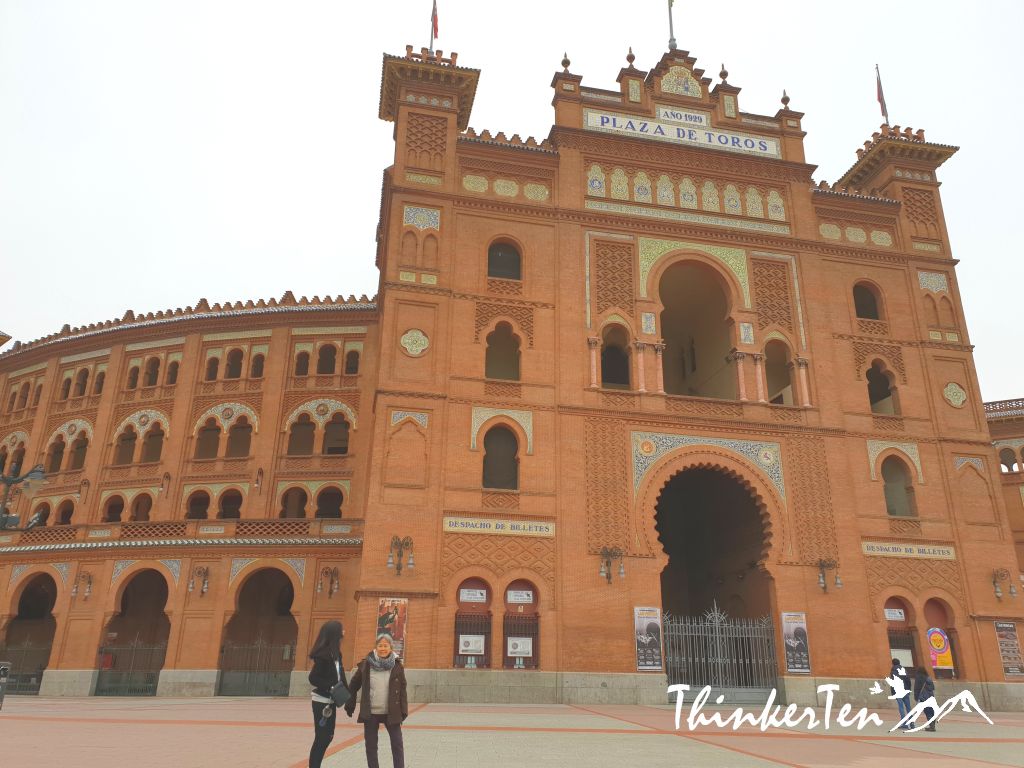 The bullring also used for other purposes such as concerts tour (Beatles performed here in 1965) and Tennis game such as Spanish Davis Cup outside bullfight seasons.

There is a tall statue in honor of Christopher Columbus, built between 1881 and 1885. The monument is outstanding due to its height. 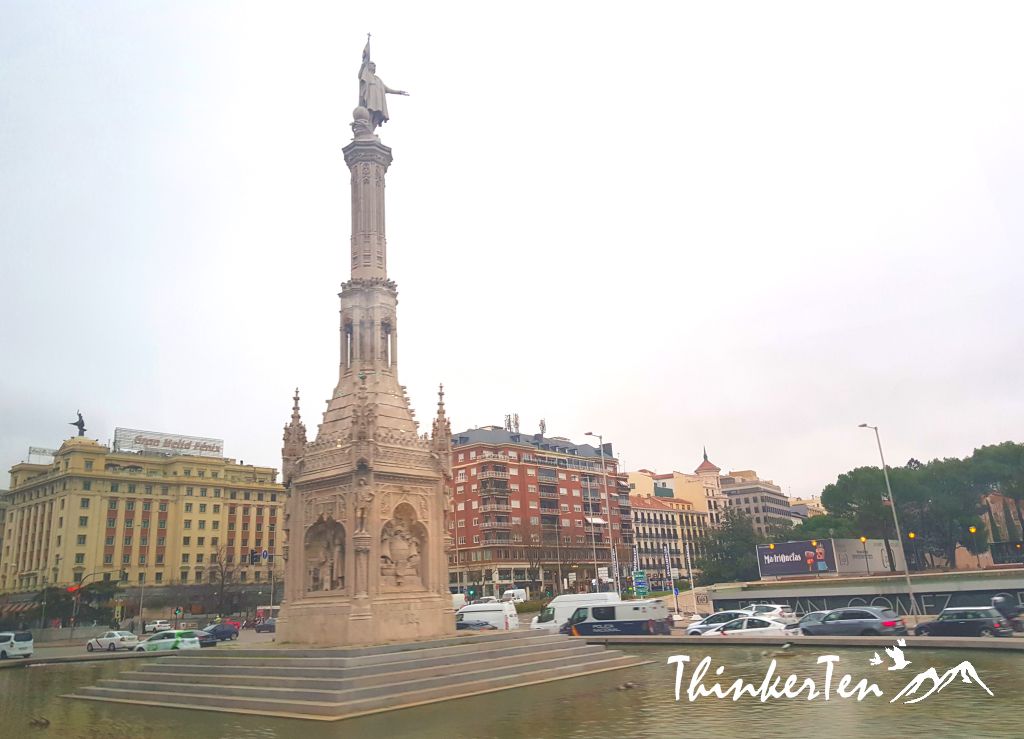 This would be one of the most notable landmarks in the city of Madrid. The white building sits at the intersection and in front, there is a huge roundabout which sits a huge fountain. It is now a city hall, cultural center, which hosts art exhibitions and workshops, conferences and concerts. 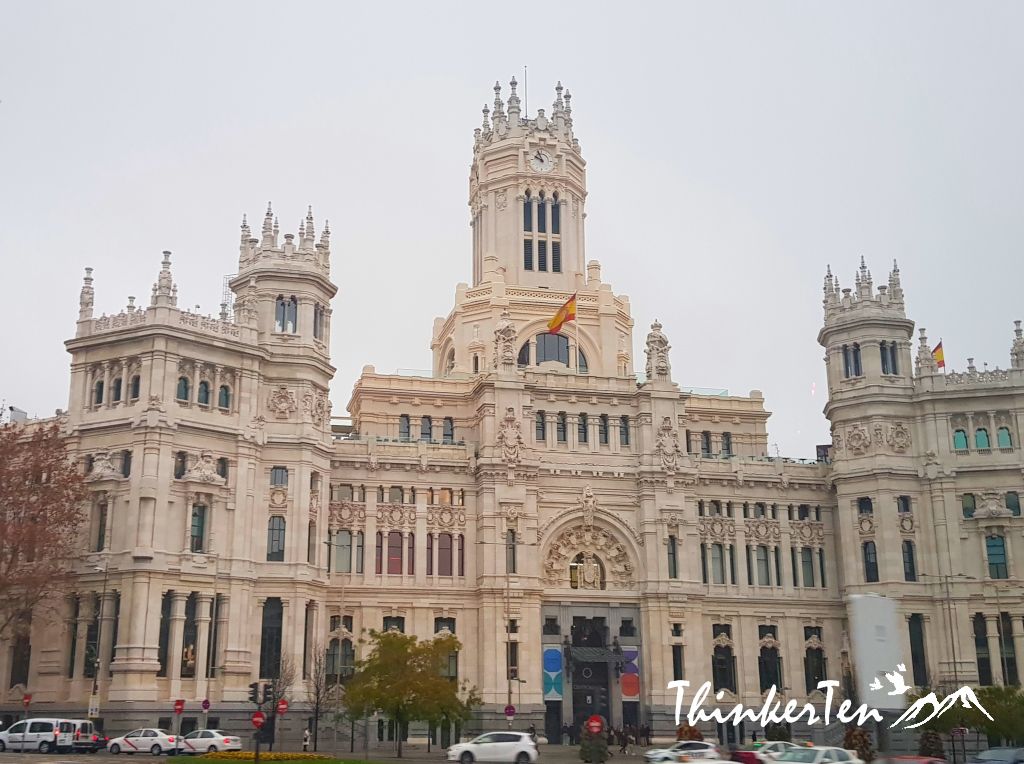 The fountain is located in front of the Cibeles Palace.  Look carefully at the fountain there is the Greek goddess of fertility and nature, sits on a chariot with a pair of lions. 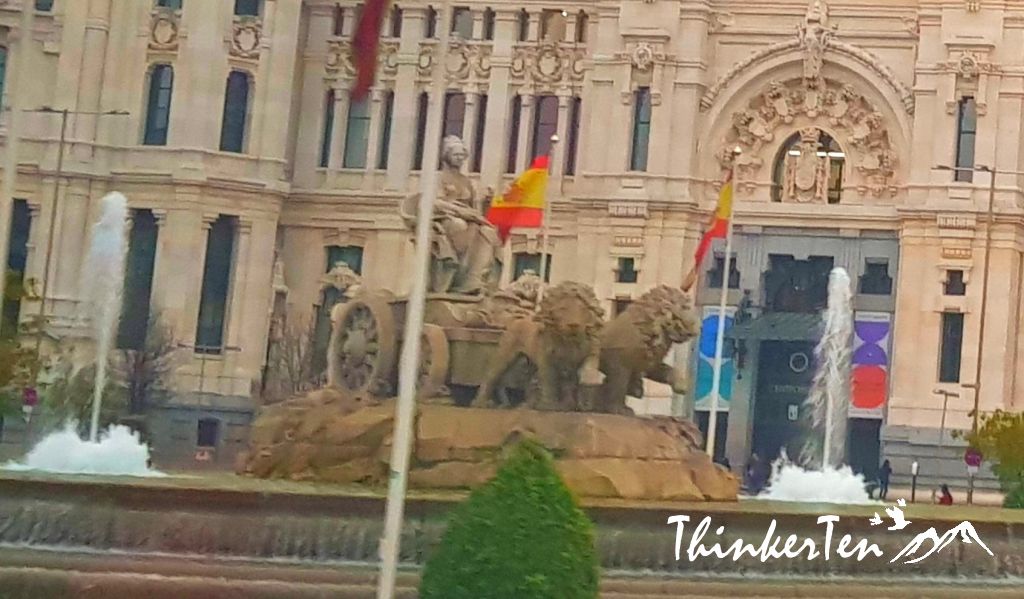 They called it the most beautiful buildings in Madrid, situated on the corner of Calle de Alcala and Gran Via, in the heart of the city. Metropolis Building’s main features include the bright white facade, which is lavishly decorated with sculptures and various ornaments, as well as the spectacular black dome on top of which a gorgeous statue of Winged Victory designed by Spanish architect Federico Coullaut-Valera Mendigutia rises to the sky. 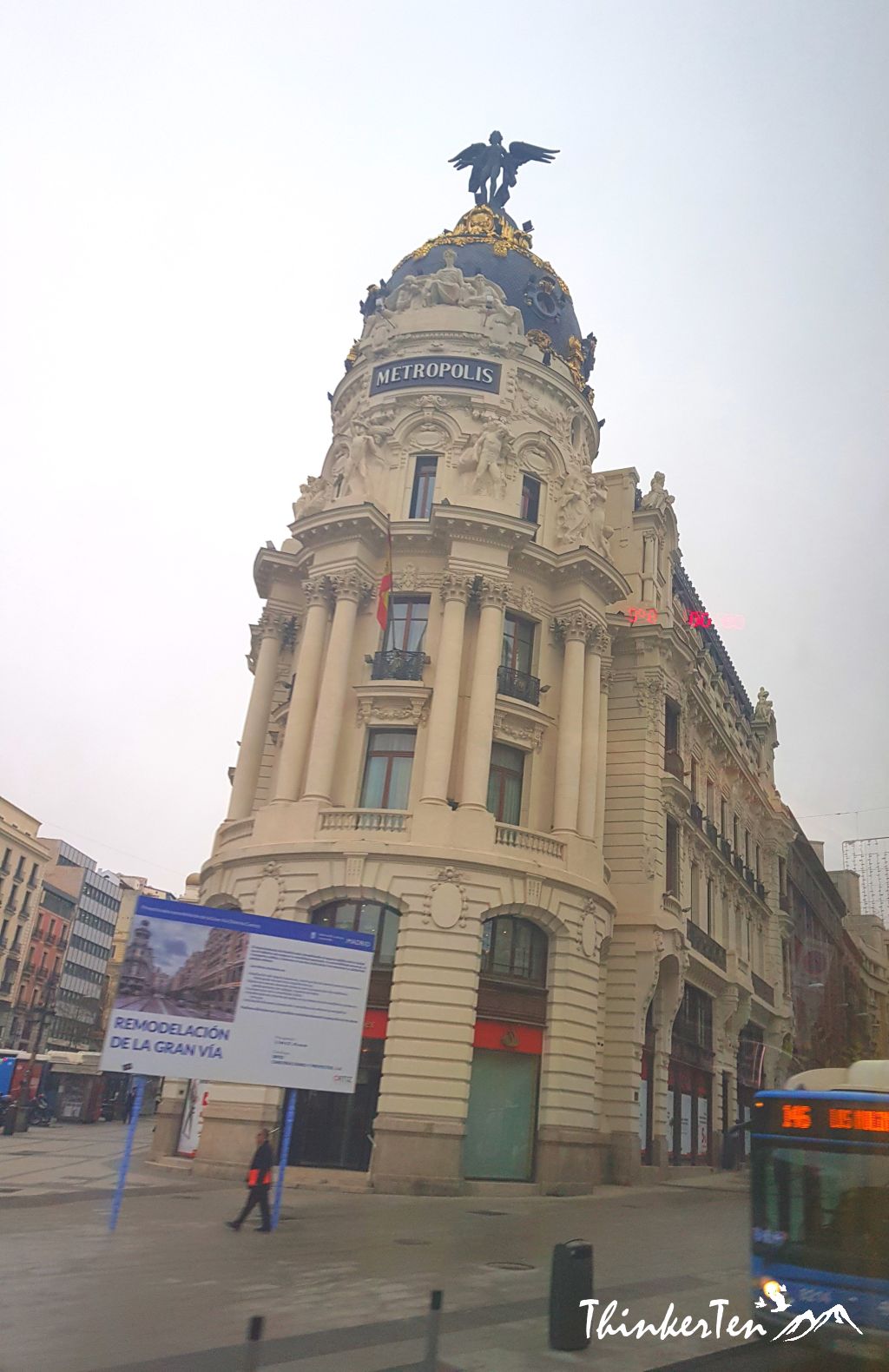 Plaza de Isabel II is close to the Royal Palace and within walking distance. It has many tapas eating places and cheap souvenirs shops.  It is less crowded compared to Puerta del Sol.

Simple and elegant architecture, if you have the time, you may want to book the ticket for the theatre. It is also known as El Real and built in 1818. You can see the big banner “1818” at the front of the building. 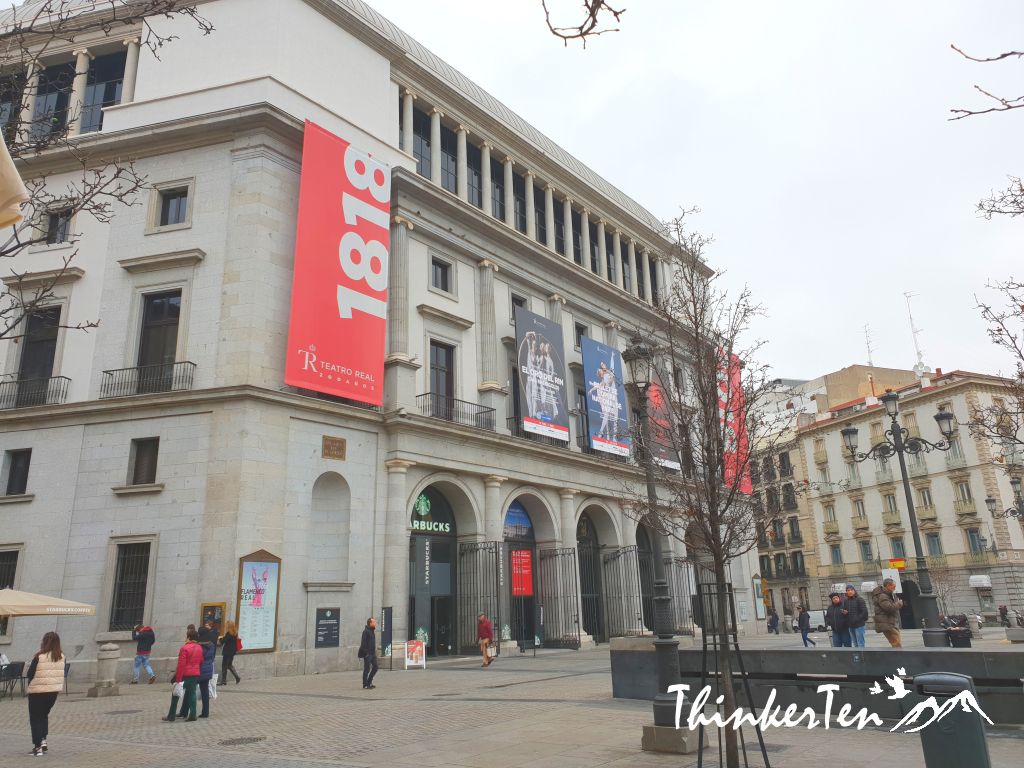 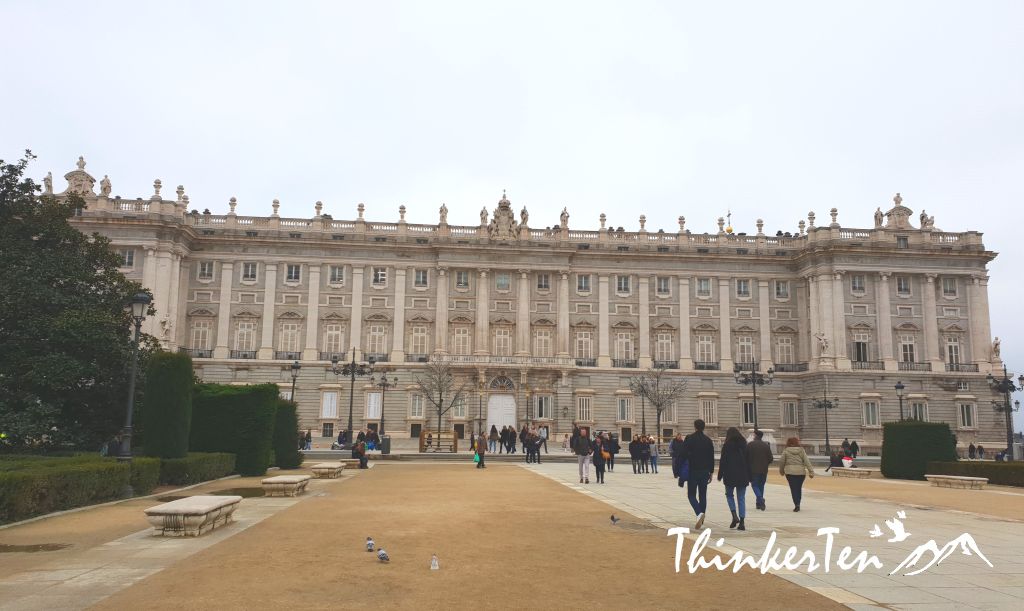 The house-palace of Ricardo Augustin is a famous building and you will notice it upon arriving at the square of Ramales. It stands out.  Detail of the murals on the top floor.  Do look up. 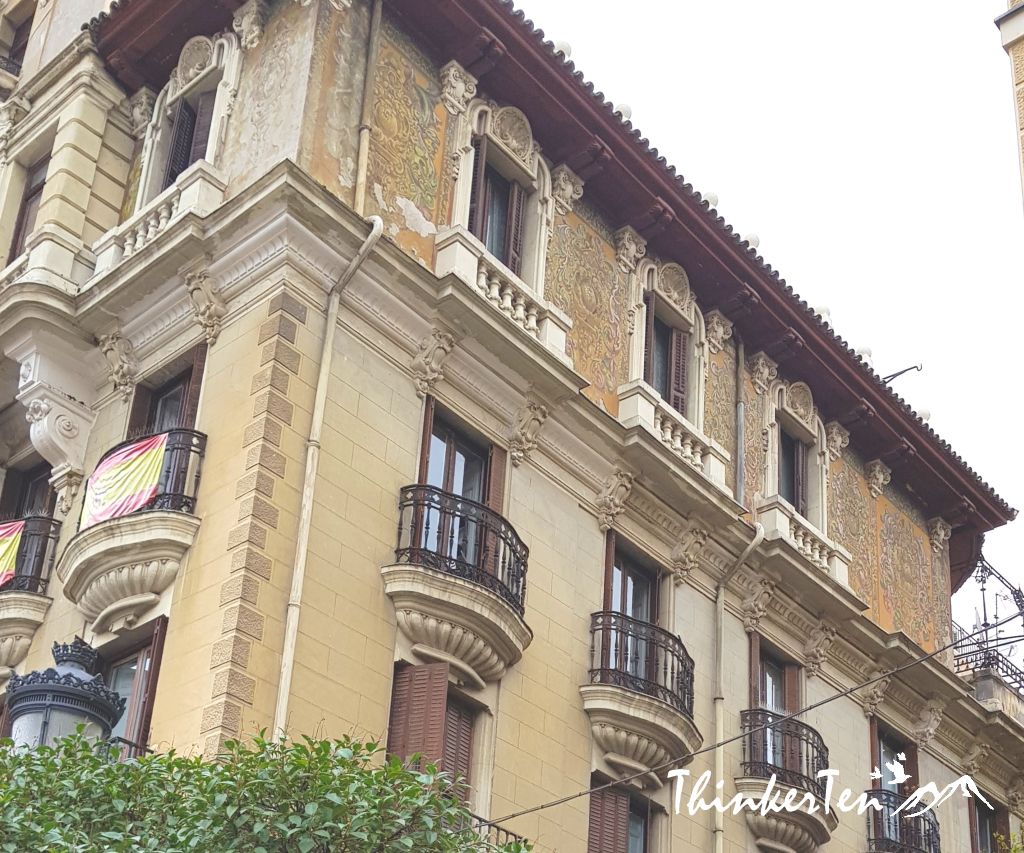 The Plaza de Ramales is also the final resting place of Madrid’s most celebrated artist, Diego Velazquez ( 1599-1660 ) so you see there is a tall monument honored for this great artist.  The monument stands in front of the 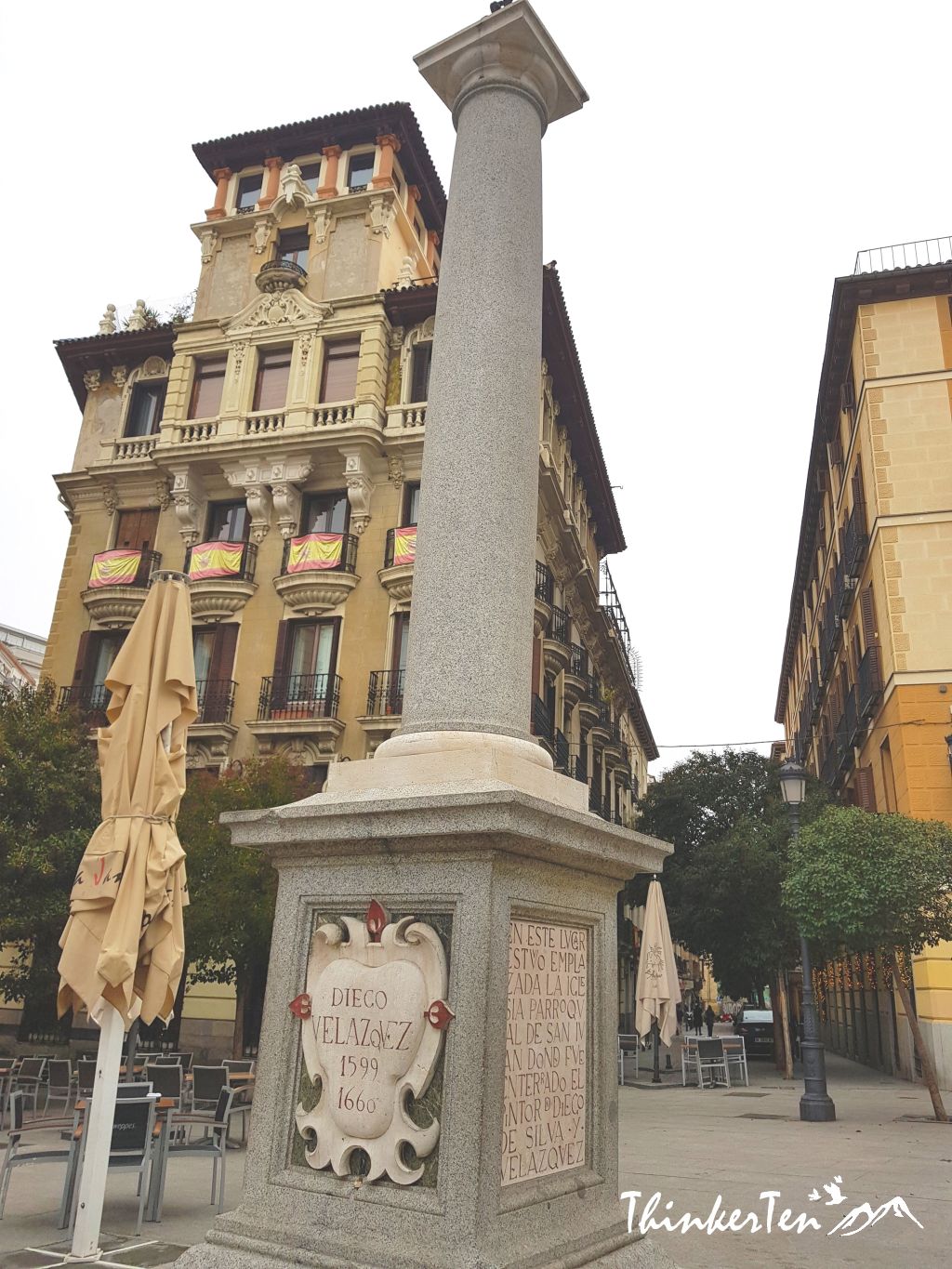 Another famous building in The Plaza de Ramales is House-palace of Domingo Trespalacios! You can see the two baroque gates which are very unique, the plinth (the lower square slab at the base of a column) and the curvilinear balconies. Don’t forget to spot these unique features. 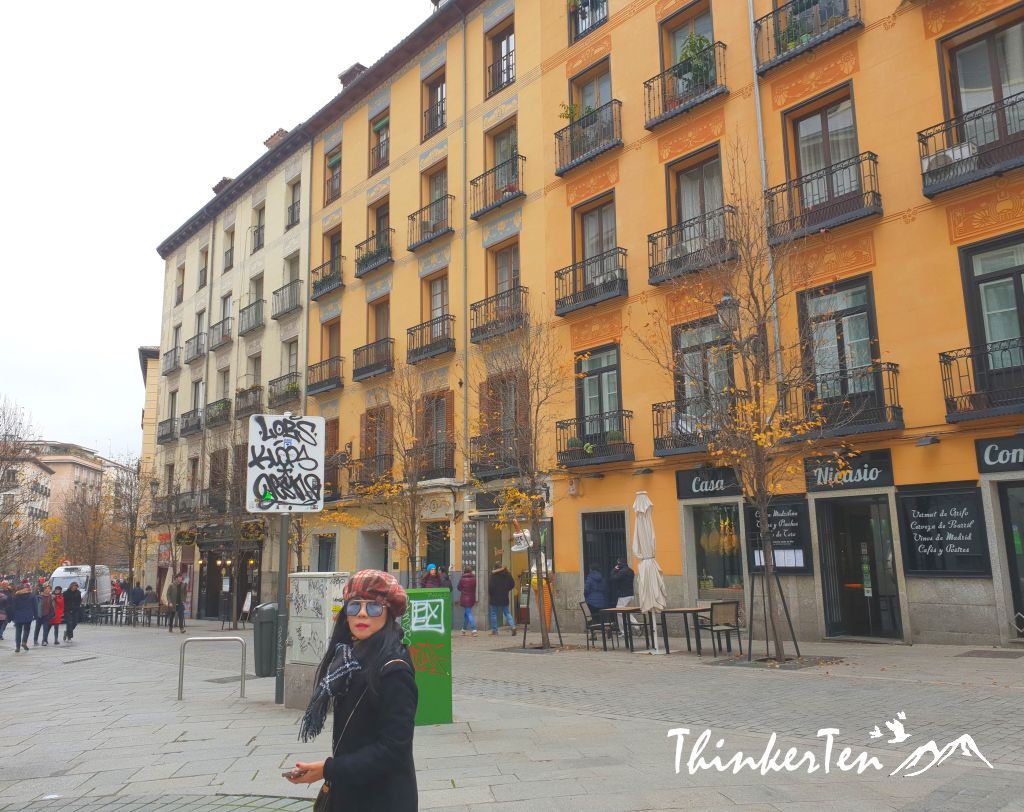 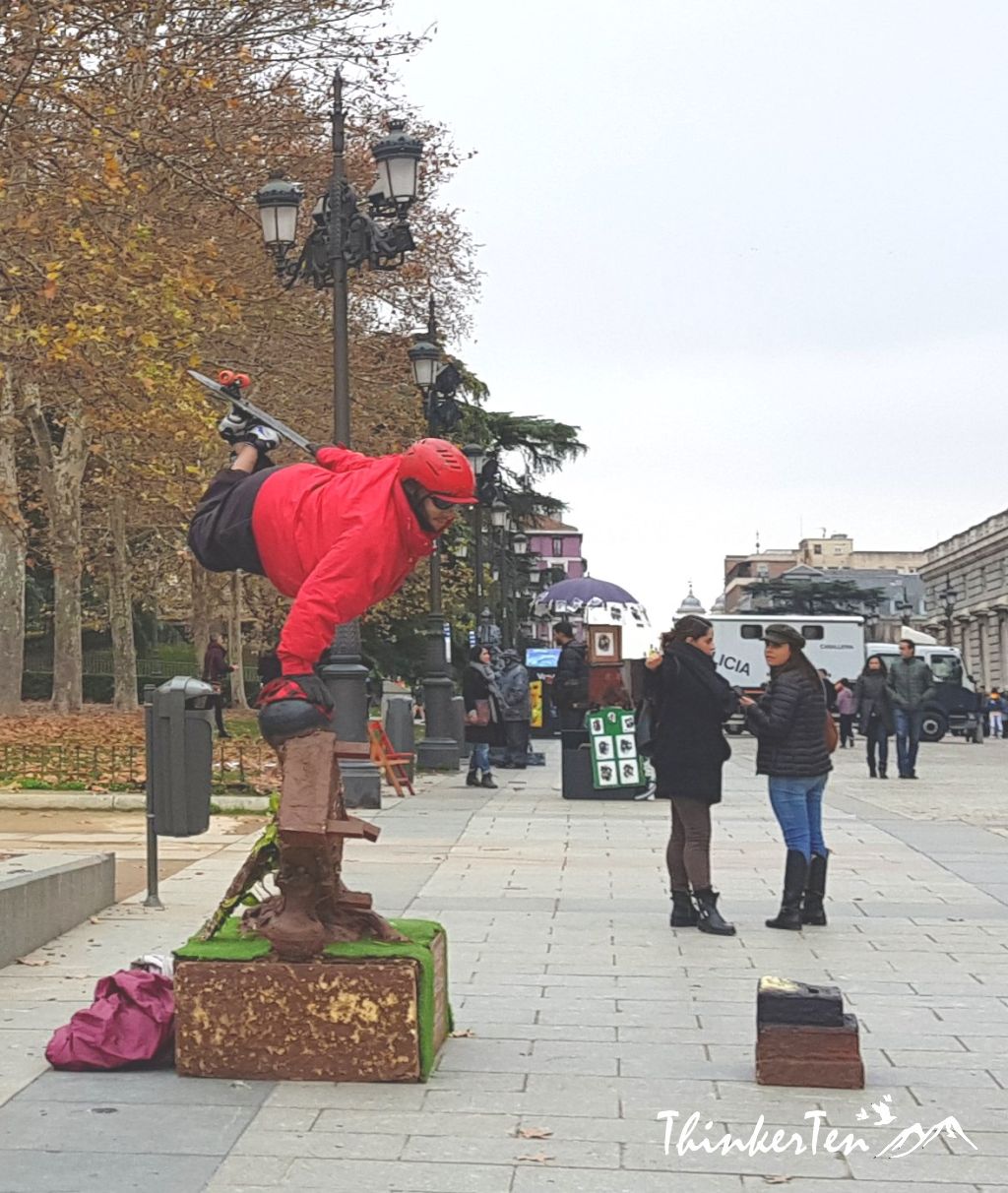 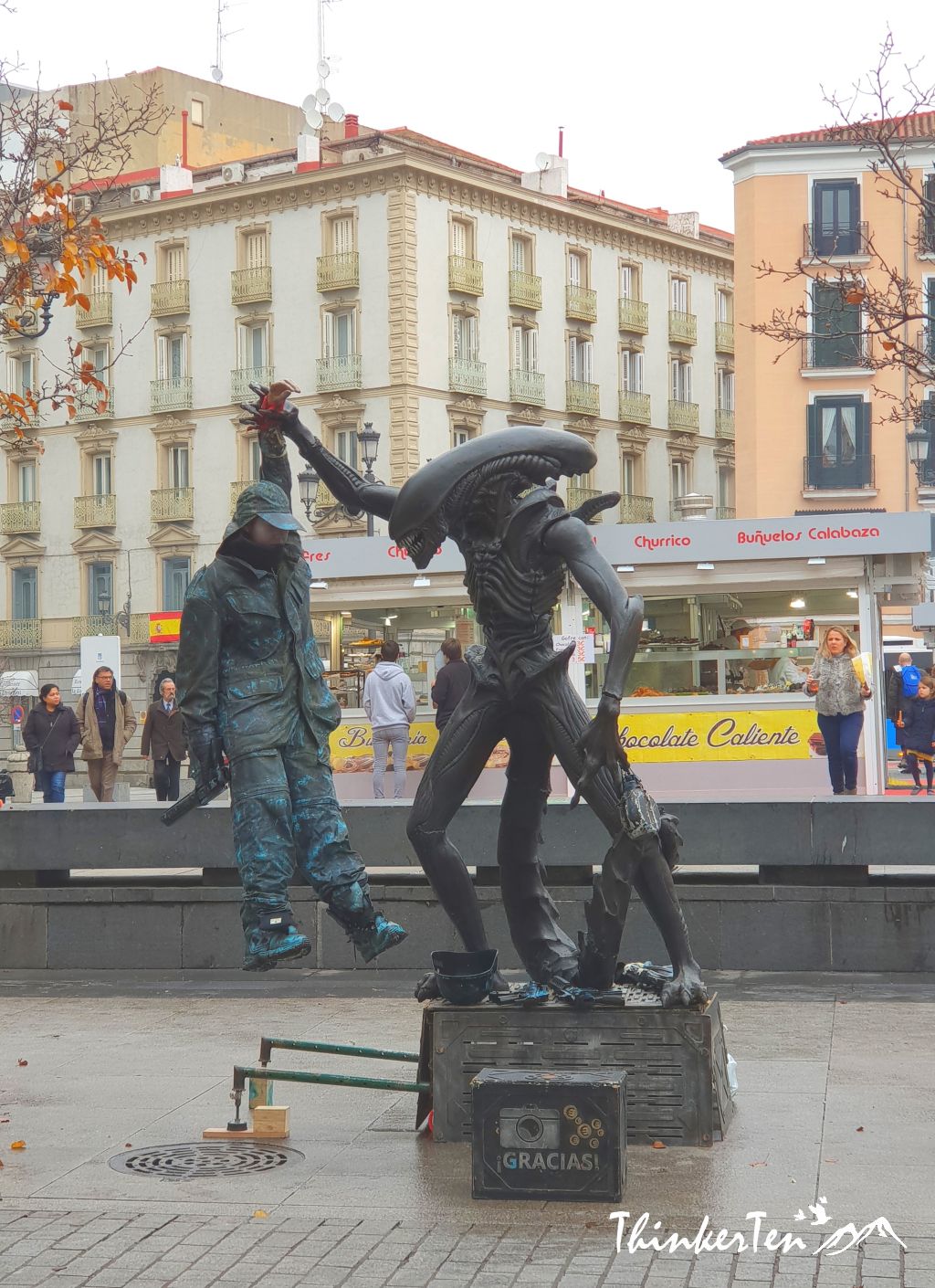 Outside the Cathedral stand a grand statue of Pope John Paul II. The statue and the facade of the church make a perfect place for photos.  This is one of Madrid’s grandest cathedral sits near to the Royal Palace of Madrid.

The Almudena Cathedral has a Museum. You can enjoy a spectacular view over Madrid from its dome. 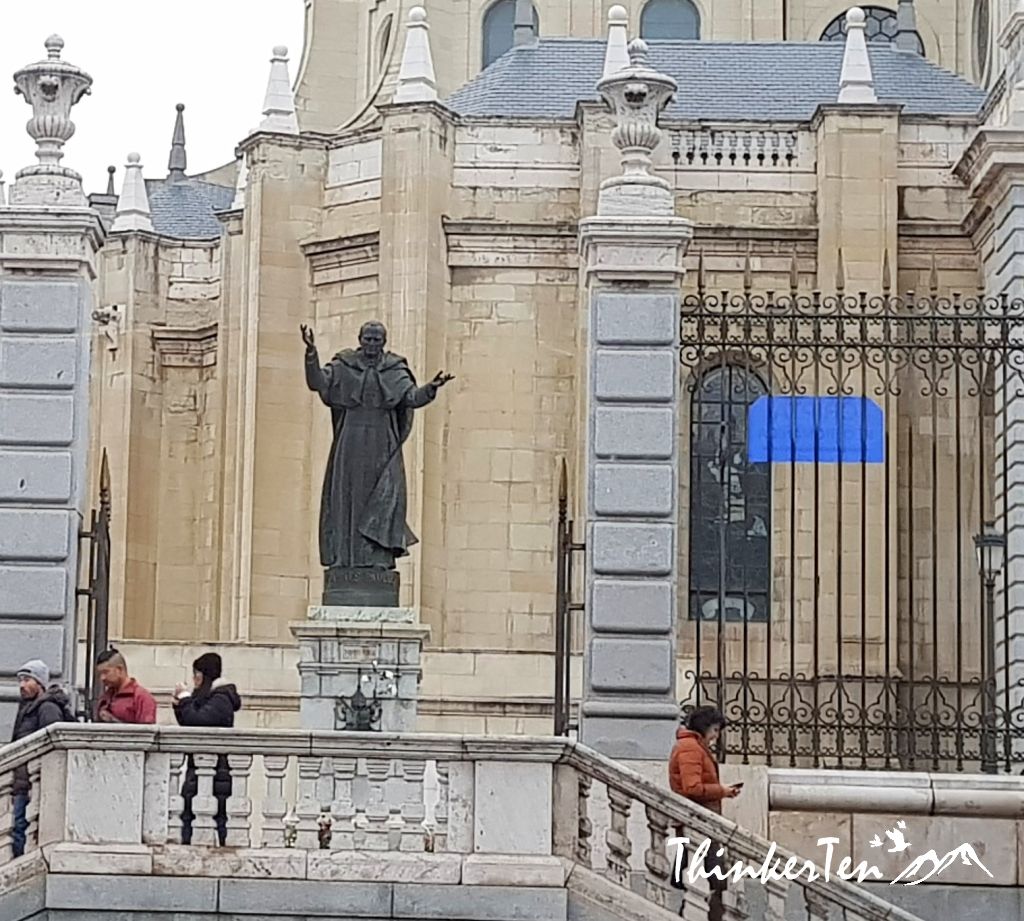 Puerta del Sol in Spanish means “Gate of the Sun” is a public Square and also one of the busiest place in Madrid.  There are a few things you may want to pay attention to spot them. 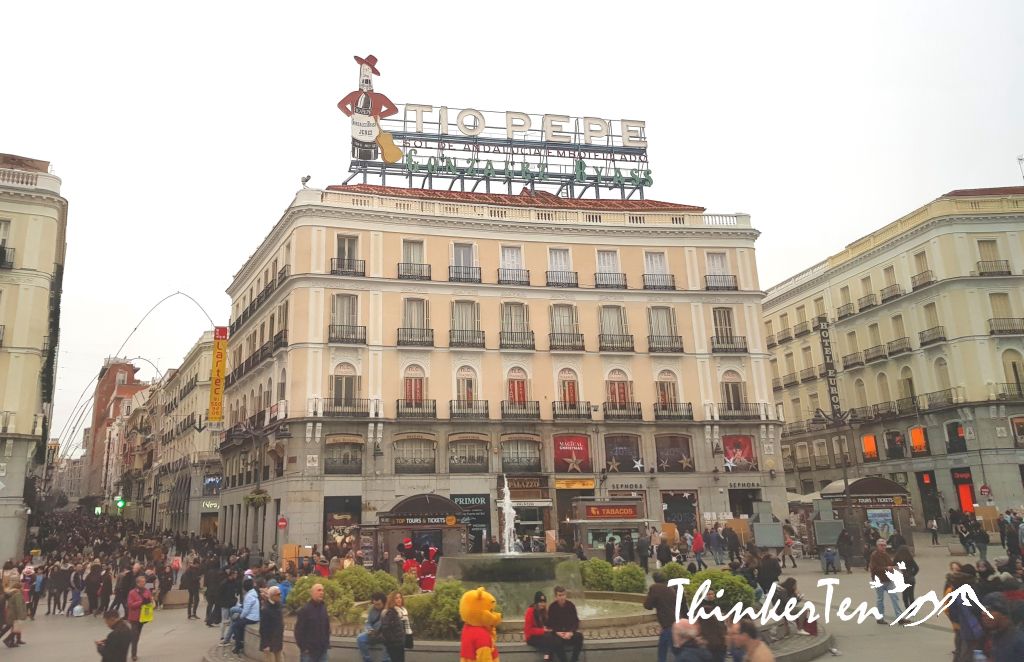 14. Statue of the Bear and the Strawberry Tree

The Statue of the Bear and the Strawberry Tree is made of stone and bronze, it is the symbol of Madrid. It is located in one of the most crowded areas in Madrid, at Puerta del Sol. You will also notice this is a great meeting place. 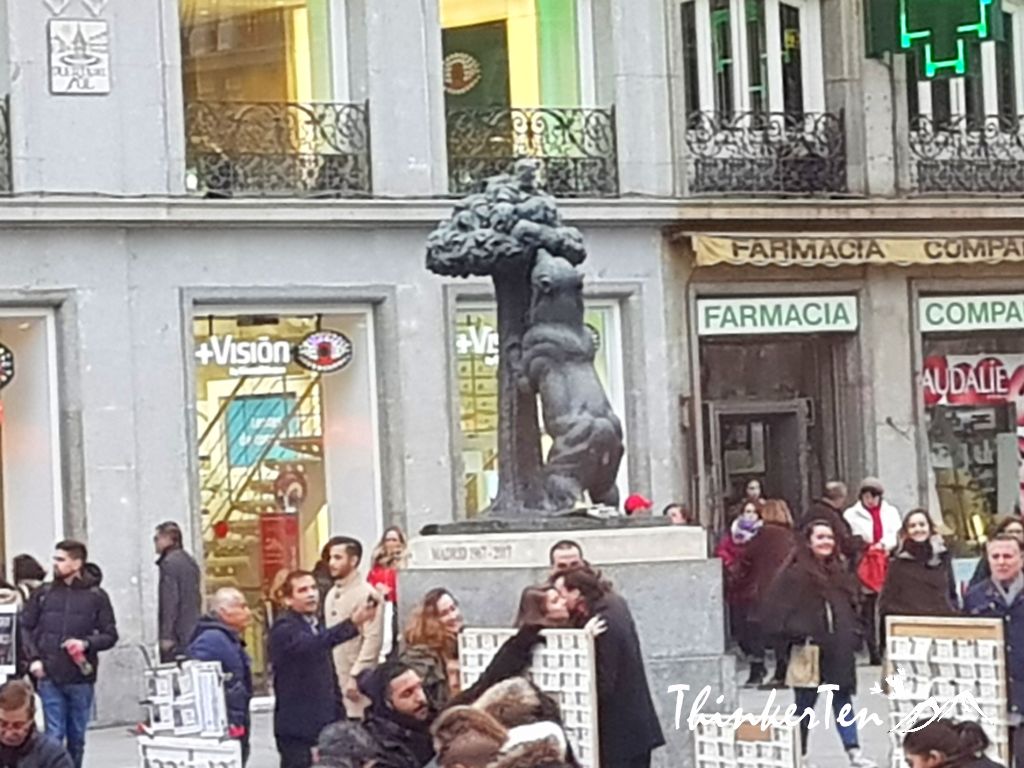 The huge sherry bottle (Sherry winery) which resembles a human wearing a wide-brimmed hat and short bullfighter jacket, and is holding a guitar is the popular sign in Madrid Puerta del Sol. Why it is so popular? Well, it was taken down in April 2011 because the building was going to be refurbished and later Apple store occupied the place and the sign did not return. People got worried so 50,000 online signature to petition authorities to bring Tio Pepe back to Sol, as it has been there for many decades. At night, the neon really shows up and brighten the whole square. 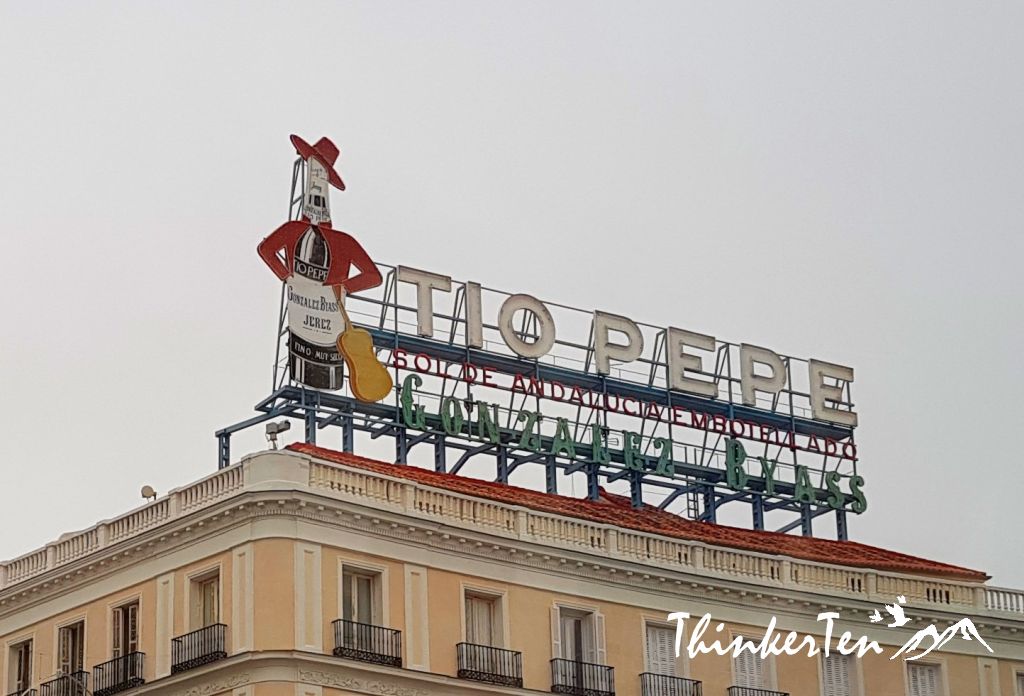 There is a 19th-century turret clock at the top of the old post office building. There is a New Year tradition for the Spanish to gather at the front of the square, each bearing 12 grapes. It is a tradition to eat a piece of grape for every loud ringing of the bell, continuing until all 12 has been consumed. After the 12 rings, the New Year is celebrated with fireworks displayed and televised all around Spain.

Spain’s lower parliament located near Plaza de las Cortes. At the front of the building, there is a pair of huge lion statues guarding the entrance. The neoclassical building is open to the public with a guided visit on Friday and Saturday. 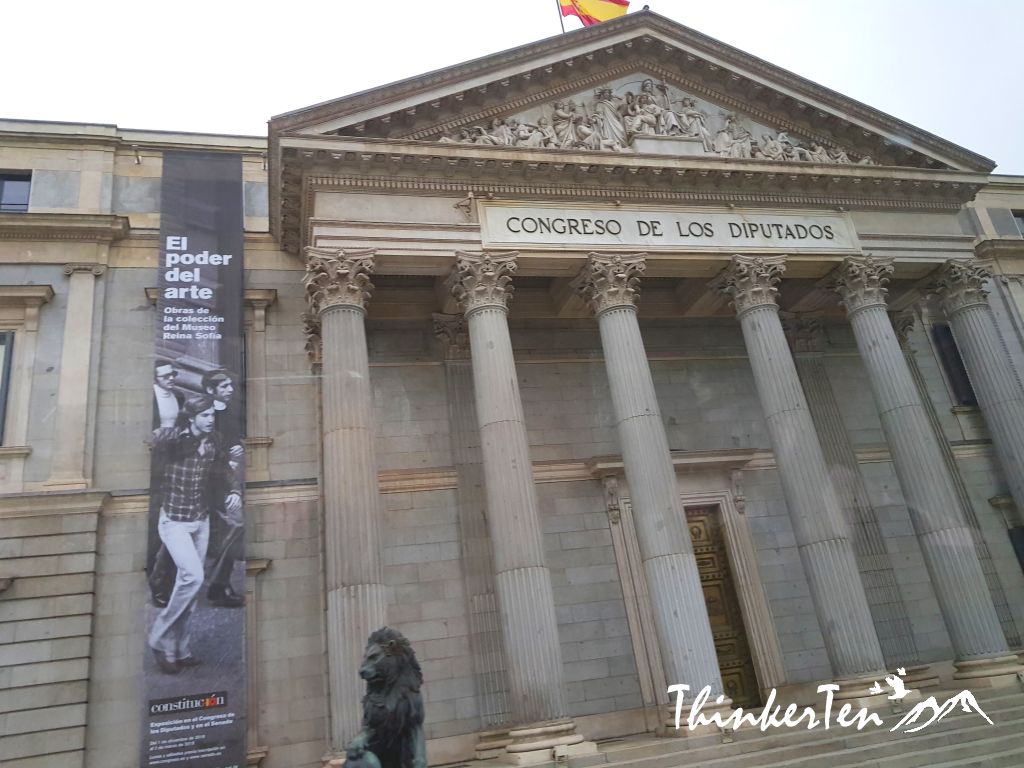 Another majestic fountain not to be missed in Madrid city. Neptune Fountain is also one of the most beautiful ones you cannot miss while visiting Madrid city. The Neo-classical sculpture represents the god of the sea with his trident upon a chariot, pulled by two sea horses.

Madrid Atocha is the largest railway station in Madrid. It has the AVE high-speed trains connecting you to other big cities in a short time. It has a beautiful indoor tropical garden which is a highlight of this old building. 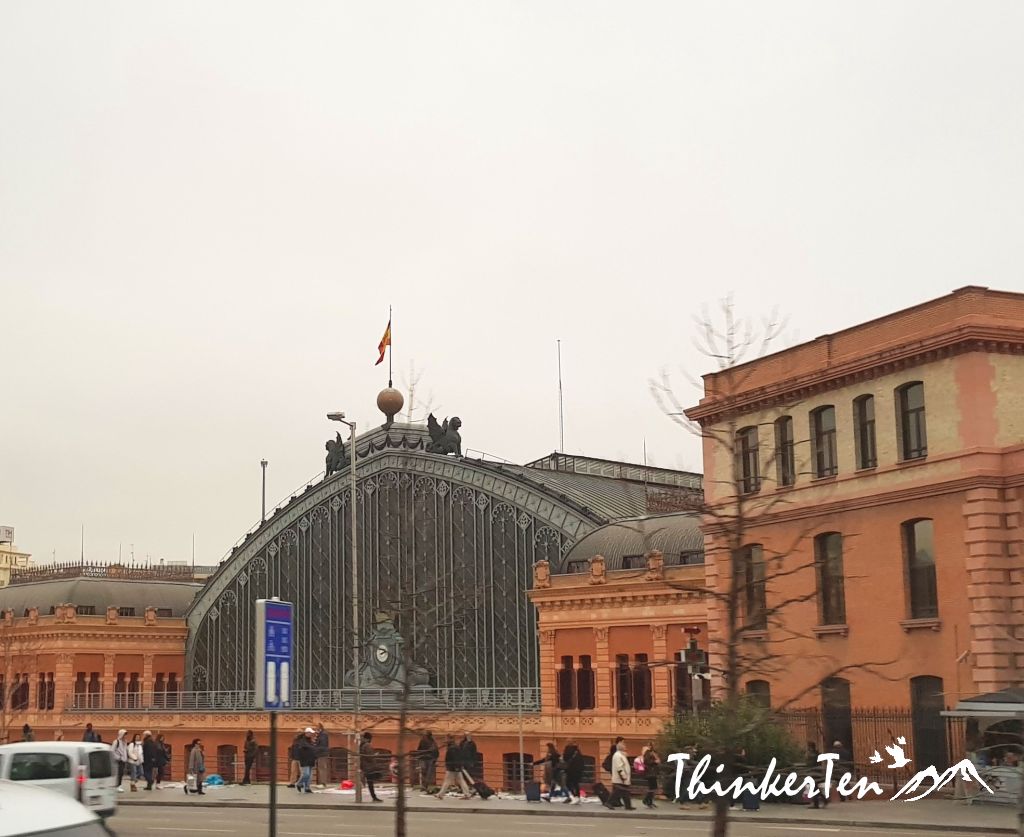 Estadio Santiago Bernabeu Stadium is a must visit even if you are not a football fan. It is the home field of the famous Real Madrid Football Club where elite football stars such as David Beckham and Ronaldo have once played for. You can book a tour inside the stadium as it is quite impressive to see the fan shop, the changing room, the trophy cabinet, and the magnificent stadium. 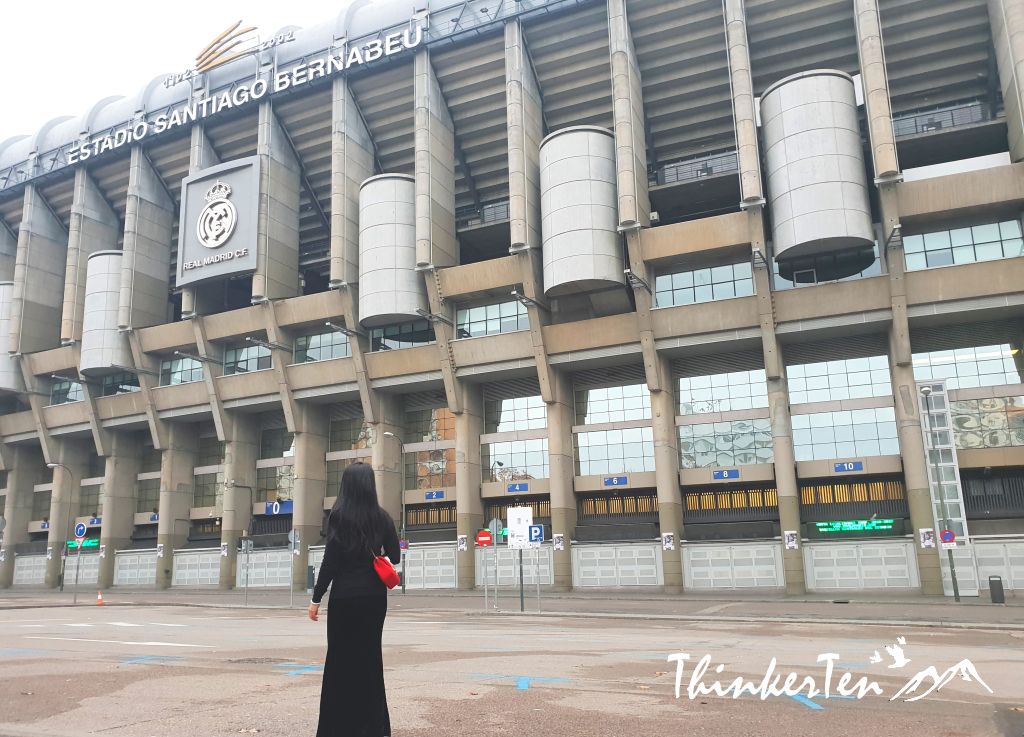 An important tourist spot in the city of Madrid. A number of shops and restaurants with their terraces. Various cultural events in the city held here too. The symmetrical rectangular square features a uniform architecture and one of the biggest square in the heart of Madrid.

Plaza de la Villa is a small square in the heart of Madrid, much smaller than Plaza Mayor. At the center, there is a statue of Alvaro de Bazan, the Spanish Admiral who planned the Armada, the fleet that attempted to invade England.

When you explore Madrid city, do raise your head and look out for statues at the topmost of the grand buildings and pay attention to the tiles of the walls and the balconies.  You will be able to spot many interesting statues.

Statues at the topmost of the buildings 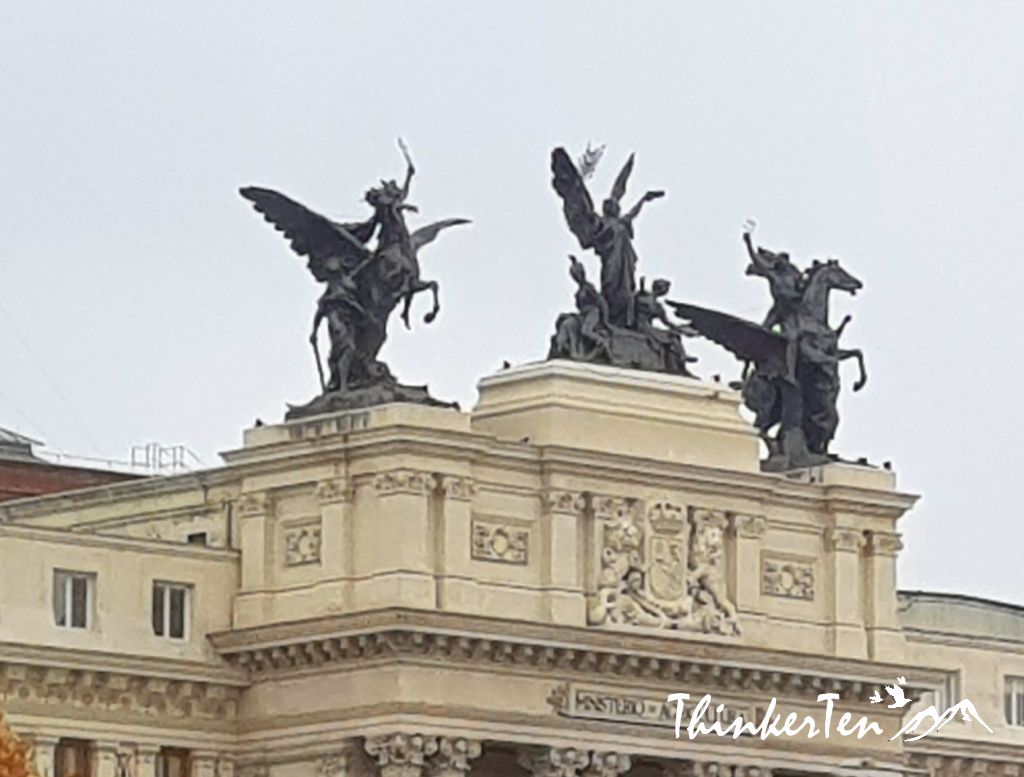 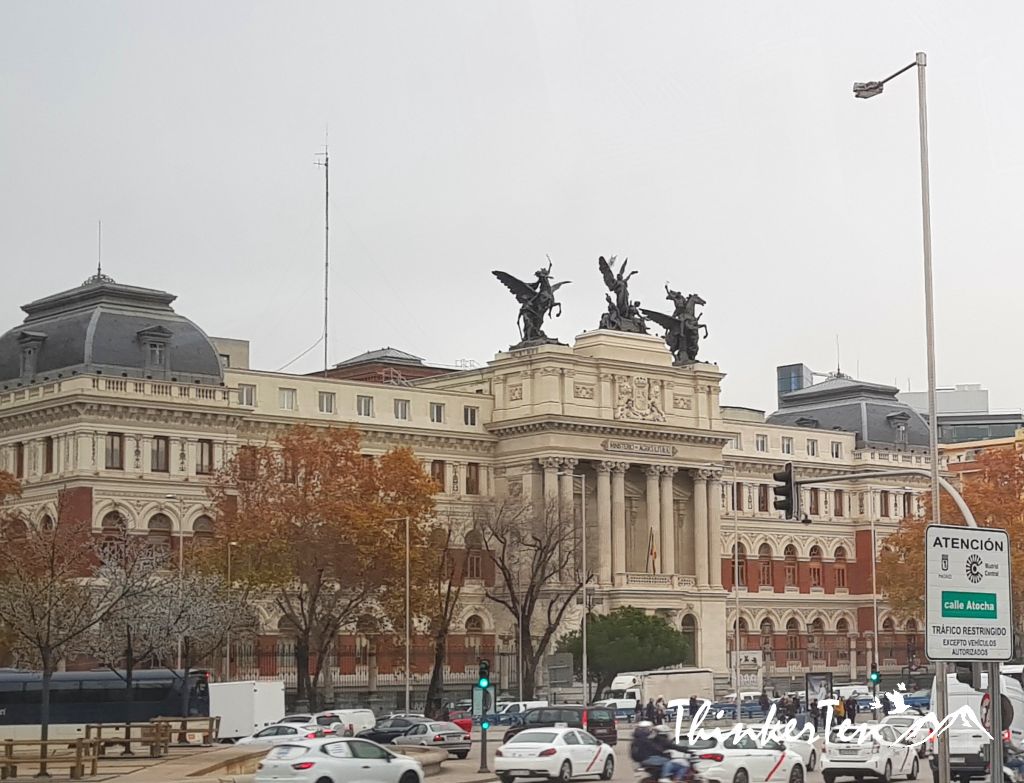 Another statue at the top of the building 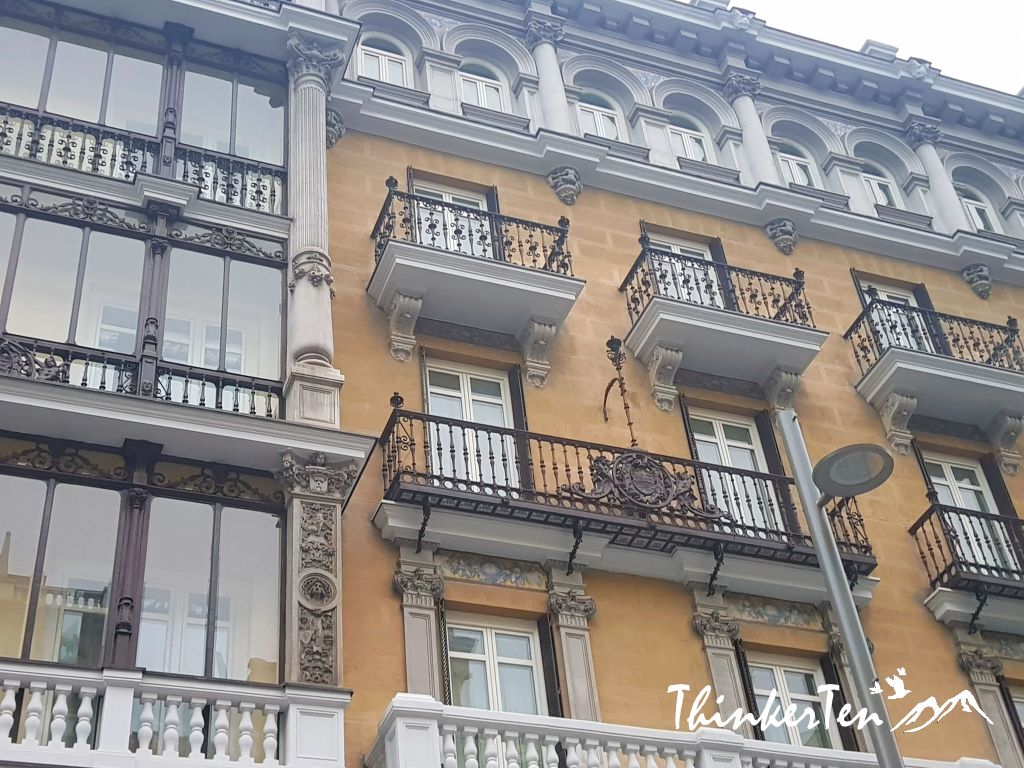 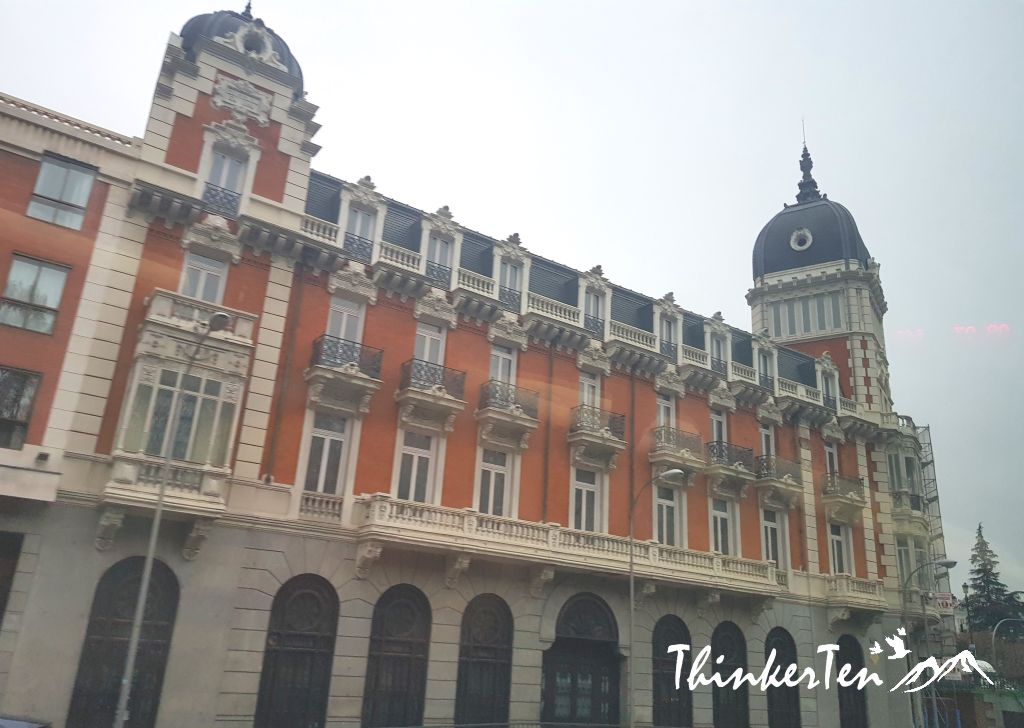 You may be interested to have a guided night walking tour in Madrid to check out some vibrant attractions of Madrid. The 3 hours walking tour includes Plaza Mayor, Austrias and Puerta del Sol. See Madrid from a different perspective. 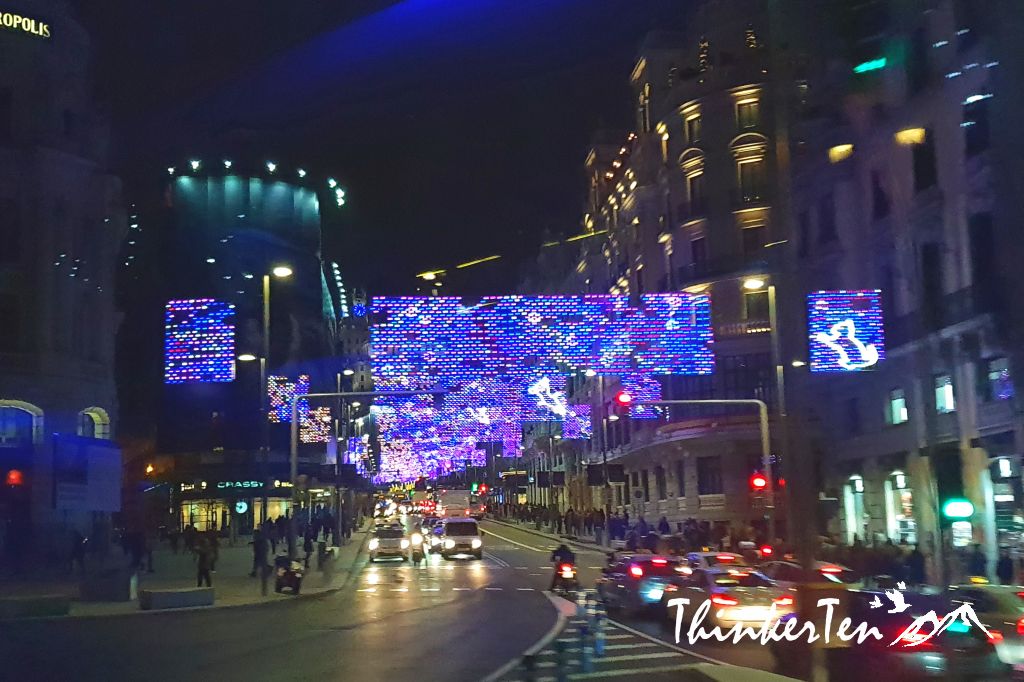 You may also want to explore Madrid by Segway and zoom around the plazas and streets of the Spanish capital.  This will save you a lot of time from walking. 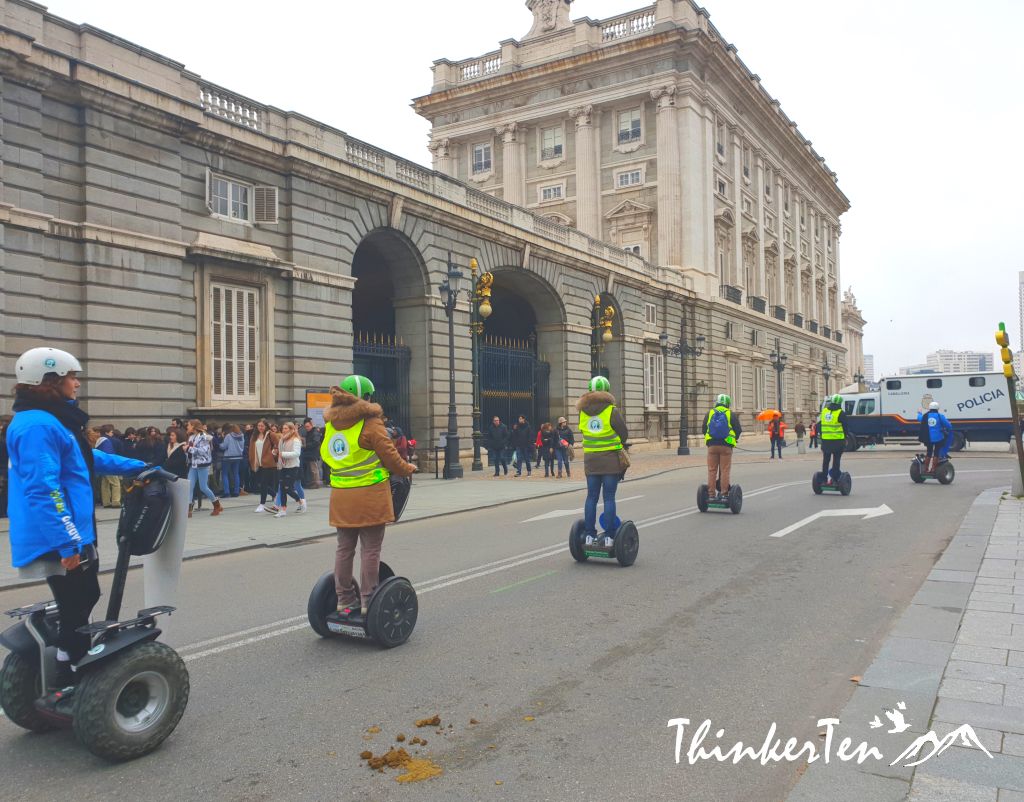 I think 2-3 days is ideal to explore this beautiful city of Madrid. It is a city that has something for everyone.  Out of the 20 top places to visit in Madrid, which would be your favorite and must visit?

Japan : Osaka Kuromon Market Street Food Review – What are the must eat?

I LOVE Madrid! We visited Spain a few years back, and I have never forgotten the vibe I felt while we were in Madrid. It’s truly amazing.

This makes me want to go and book a winter city break. Such wonderful buildings there.

Dear Mill,
Winter is not as cold compared to other part of Europe, still pleasant to stroll in the day. Winter is a good choice too.

This guide is going to be so useful! I’m planning a trip this summer and I can’t wait to visit!

Thanks for your reply. Hope you can find some places to visit in the capital of Spain, Madrid.

I have always wanted to go on a trip to Europe but never considered Madrid. After seeing your amazing pictures I may need to rethink where I want to go!

Madrid is one of the city you can consider, Gran Via in Madrid is full of stunning architectures. You have to see it yourself.

Madrid sounds like an absolutely amazing place to visit. All of the sights you’ve mentioned are going straight into my bucket list. Thank you

Do check out the Metrópolis building, they said it is the most beautiful building in Madrid. May be the black dome at the top stands out. 🙂

I know from the photos that Madrid is a beauty. Lots of wonderful places to visit and see!

I have always wanted to visit another culture and Spain looks so very beautiful. There looks like there is so much to do and see!

Spain certainly has an interesting culture and there are 17 autonomous communities in Spain. There are so much to learn from Spain.

For me, I would love to check out photo number 2 of the street art. For a second I thought a real guy was hanging on the statue. The 2 other that excited me are the train station and the segway tour.

You are right, street arts always amazed me too. These people are so creative 🙂