Another popular place in Suzhou is Hanshan Temple also known as Cold Mountain Temple. It gets famous because of the poem called “Maple Bridge at Night “枫桥夜泊.  It about 15 mins from Suzhou city by taxi which is the easiest way.

The famous poem was written on the wall before you enter to Han Shan Temple.

The moon is setting. The crows are crying. The atmosphere is heavy with a chilly autumn frost. The maple trees and the lights of the fishing boats are reflected in the water. Yet I am unable to sleep because of sorrow. I vaguely hear the bells are ringing in the Temple of Frost Hill outside of Suzhou city at midnight. The poem describes the poet’s experience of taking a boat through Suzhou City. The boat is resting at night. The clear view at night and the sound of bells make the author feel very lonely and homesick. 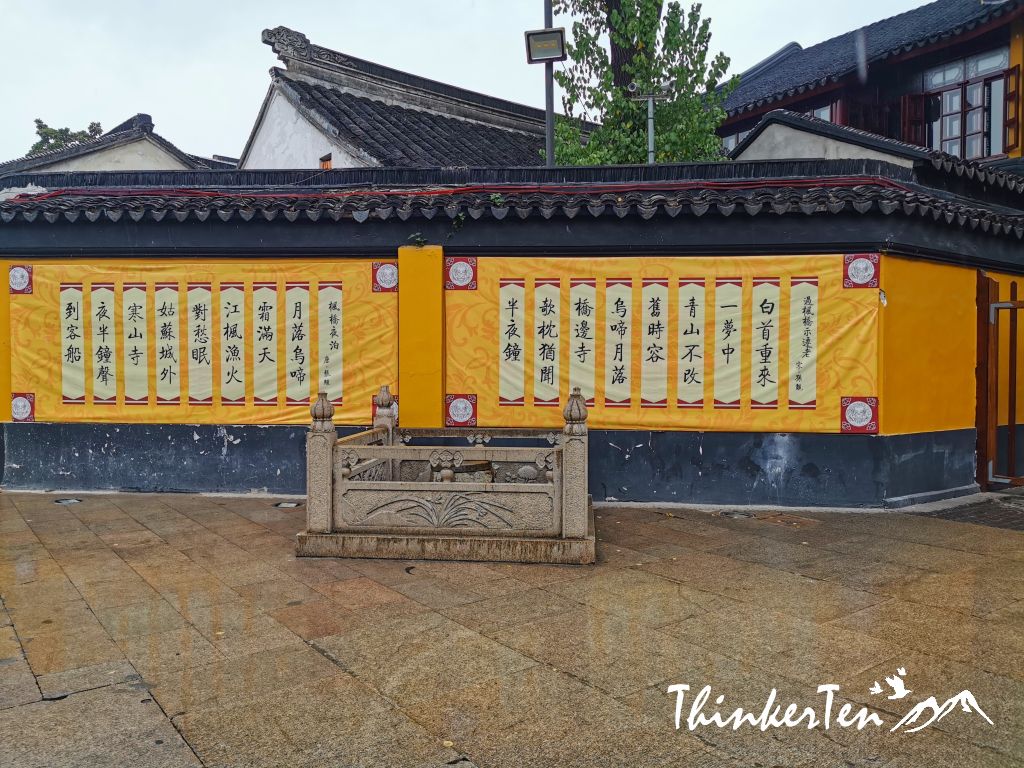 The Hanshan Temple was built during the Liang Dynasty TianJian 梁代天监年间 and has a history of more than a thousand years. The original name was “Miao Lipu Ming Tower “妙利普明塔院”. According to legend, a monk from the Tang Dynasty, Han Shan came to the temple and changed the name to Hanshan temple. But the temple got famous from the poem written by Zhang Ji – Maple Bridge of Night. 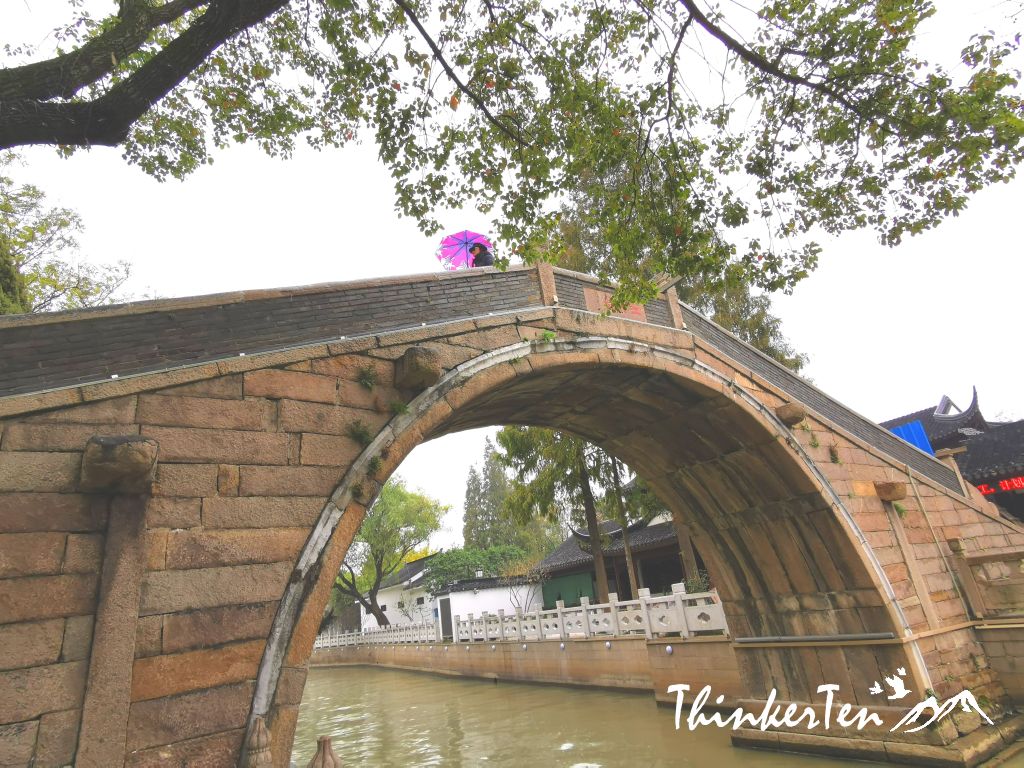 There are several important items to look at in Hanshan Temple 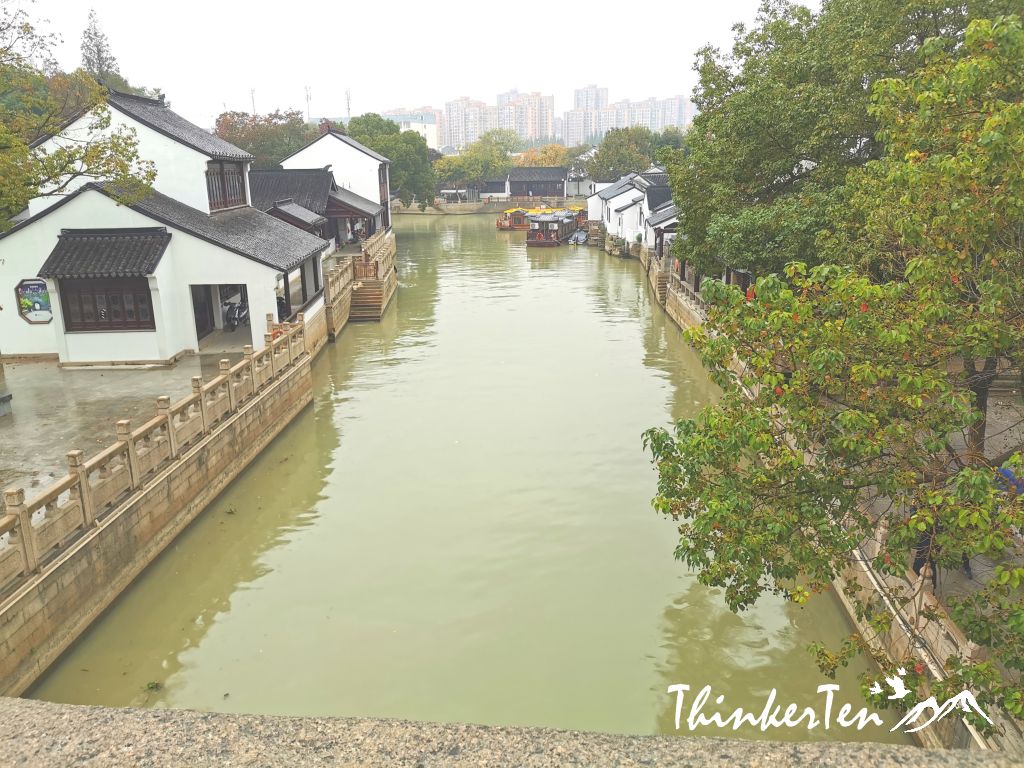 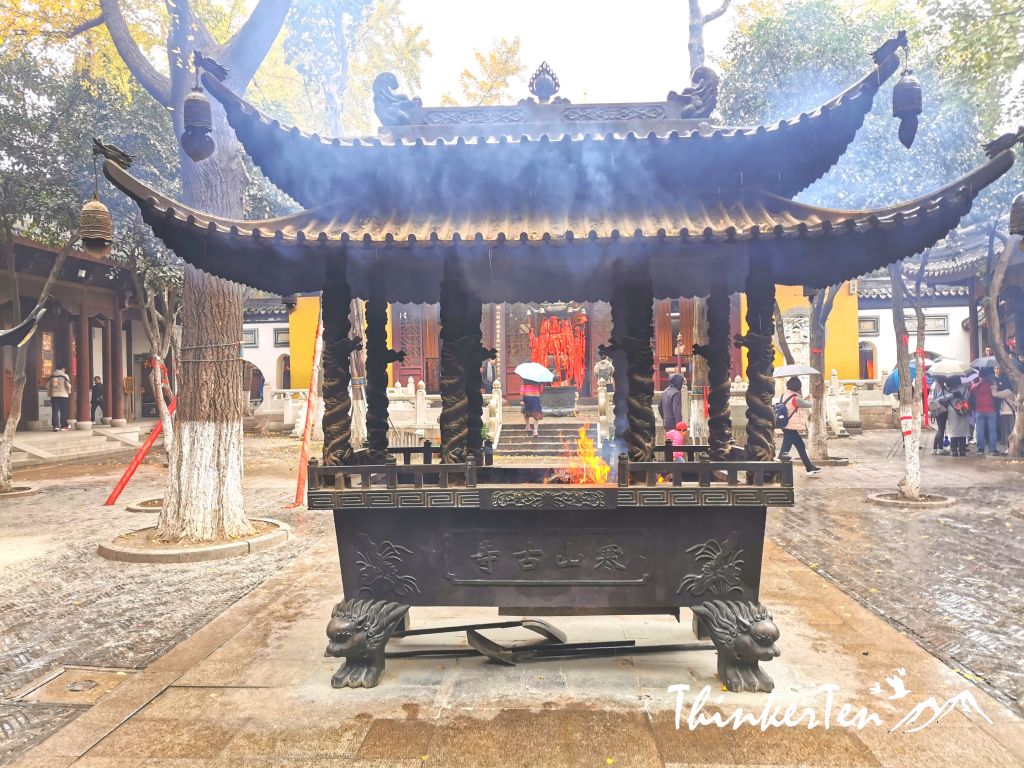 The picture of Journey to the West is on top of the rooftop. 🙂 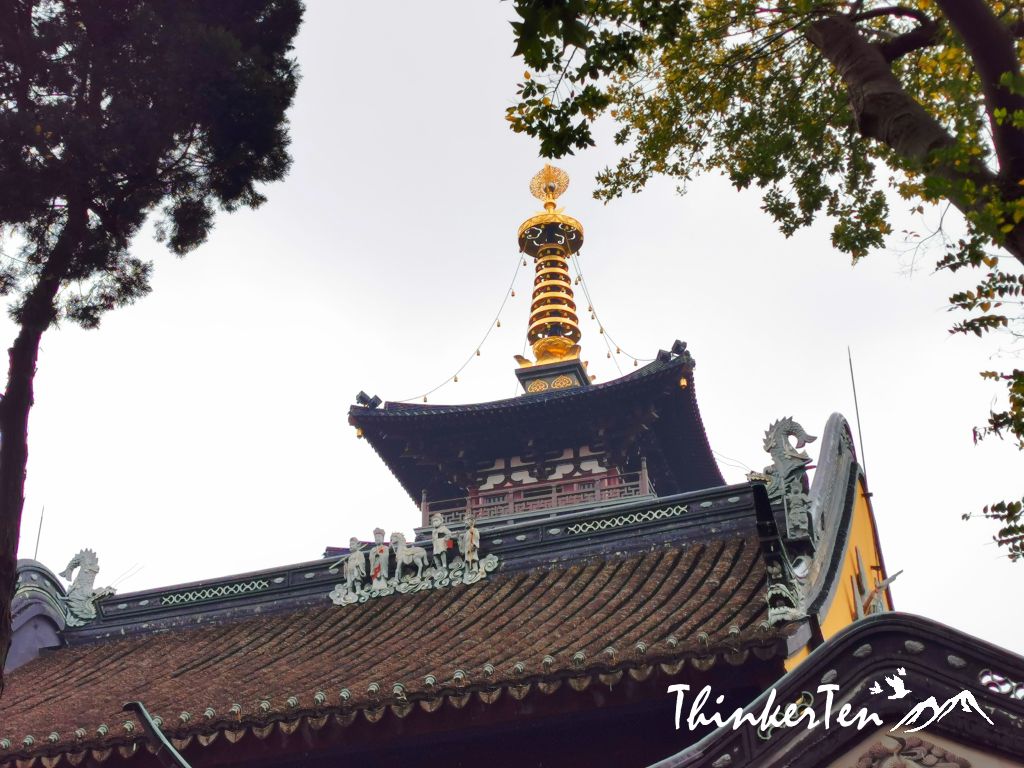 For more than a thousand years, the pagoda has been destroyed and built. In 1996, Hanshan Temple has a massive facelift and the Puming Pagoda was styled with the glorious Tang style architecture.

The iconic poem is written in almost every corner of the temple. 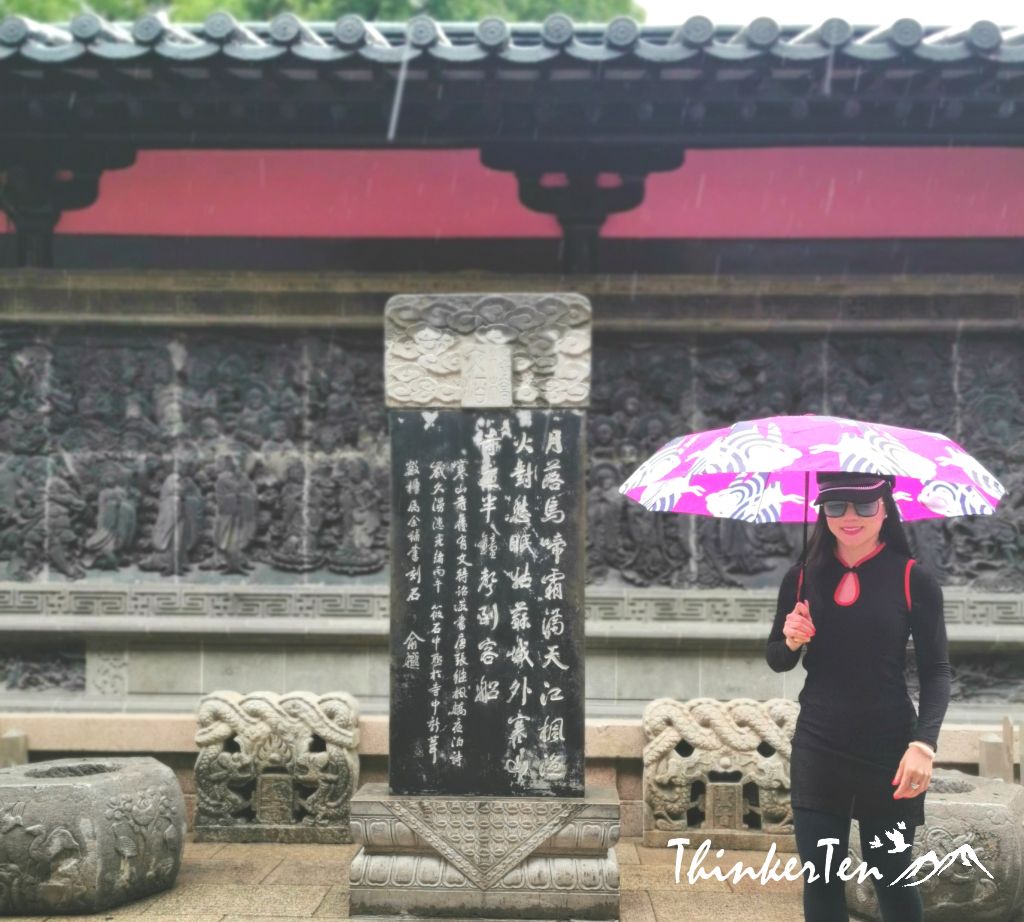 Ancient plaque in a long corridor

Hanshan Temple is famous for its inscription arts hence you see plaques after plaques with beautiful poems engraved with different styles of calligraphy arts. 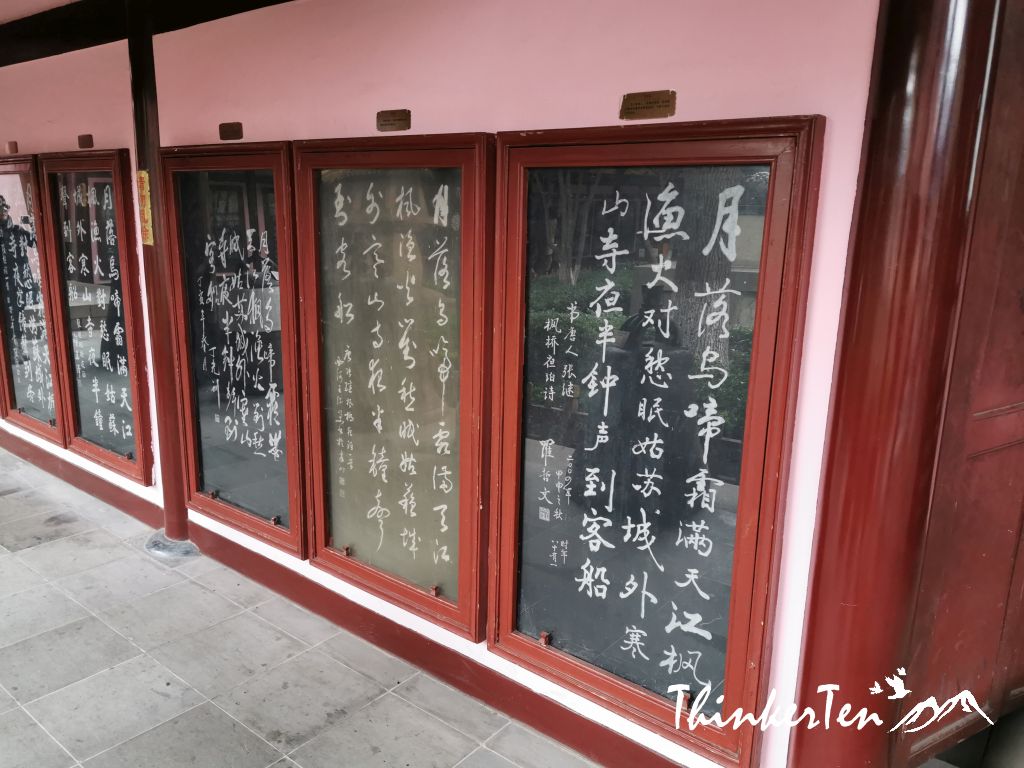 Most pilgrims will go to the ancient bell tower and ring the ancient bell of Hanshan Temple. The bell-ringing event for every New Year is very popular and usually, the bell rings 108 times. Reason to knock 108 times means to welcome the new and remove the old. 108 bells are believed to bring auspicious and happiness. 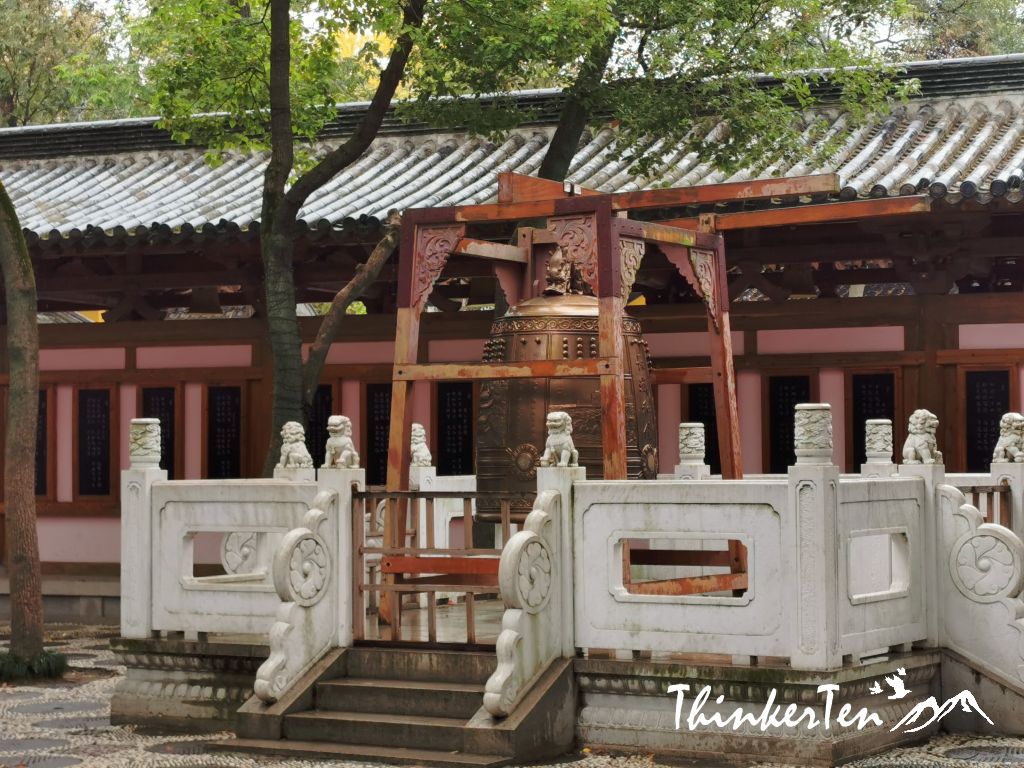 There is a giant plaque with a body height of 16.9 m tall. The front of the monument is engraved with “Feng Qiao Ye Bo” written by Yu Yue of the Qing Dynasty, and the back is engraved with the Qianlong Royal Pen Prajna Paramita 《般若波罗蜜多心经》”, which is currently the largest and highest poem in China, and is also called “Chinese The first poem monument. ” 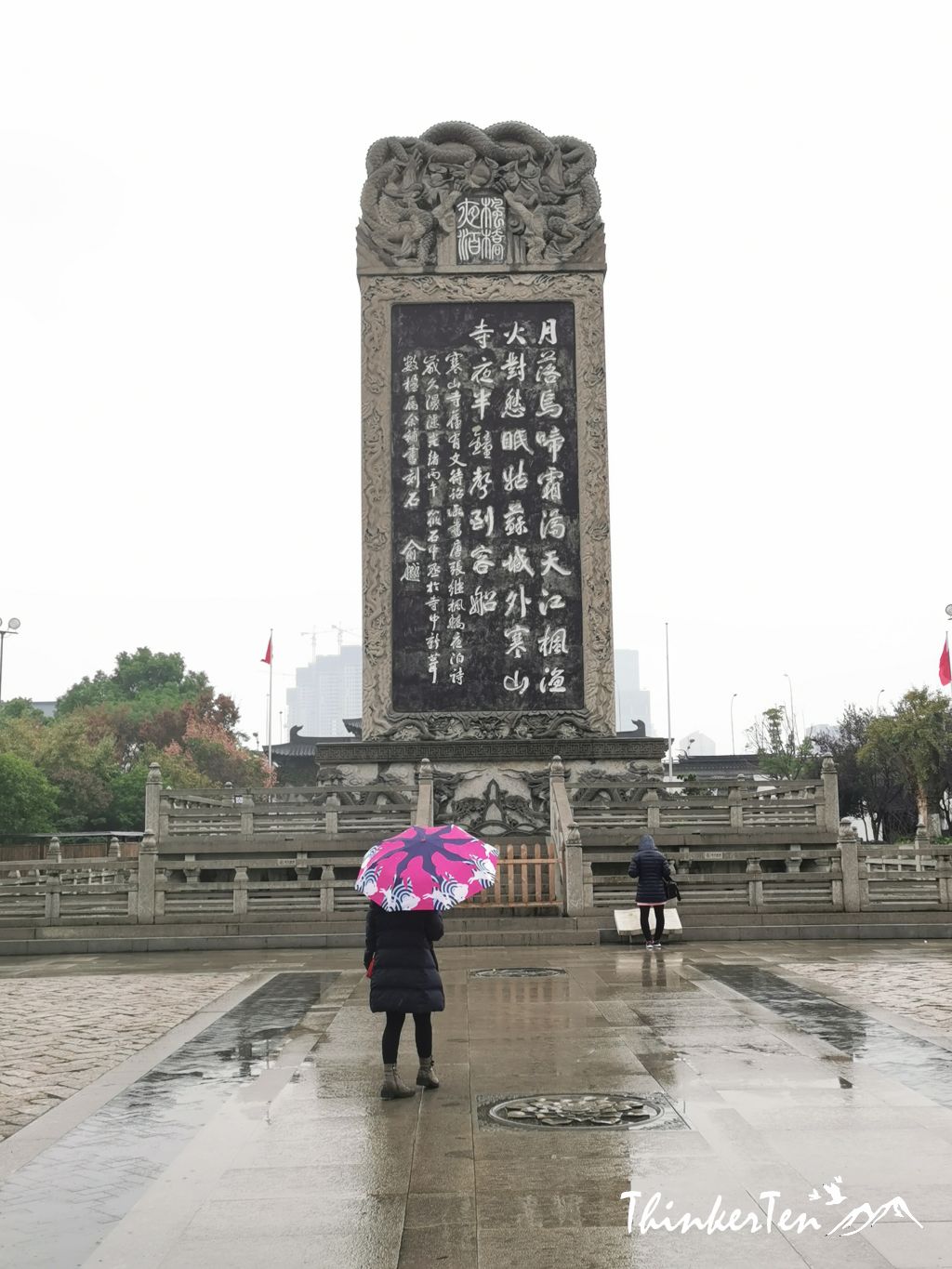 You can have vegetarian noodles in the temple in case you wanted to try the temple cuisine. 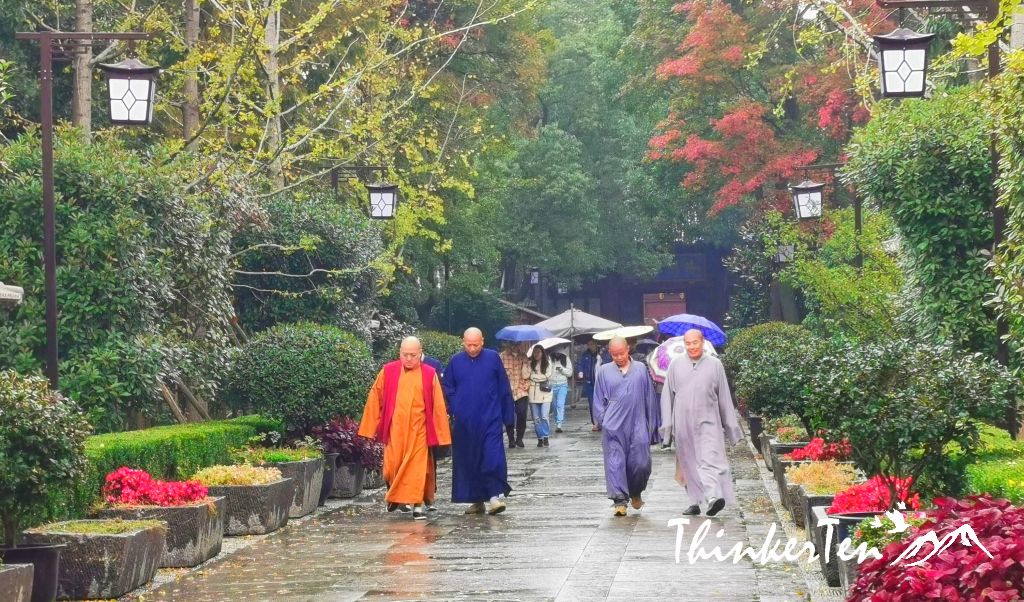 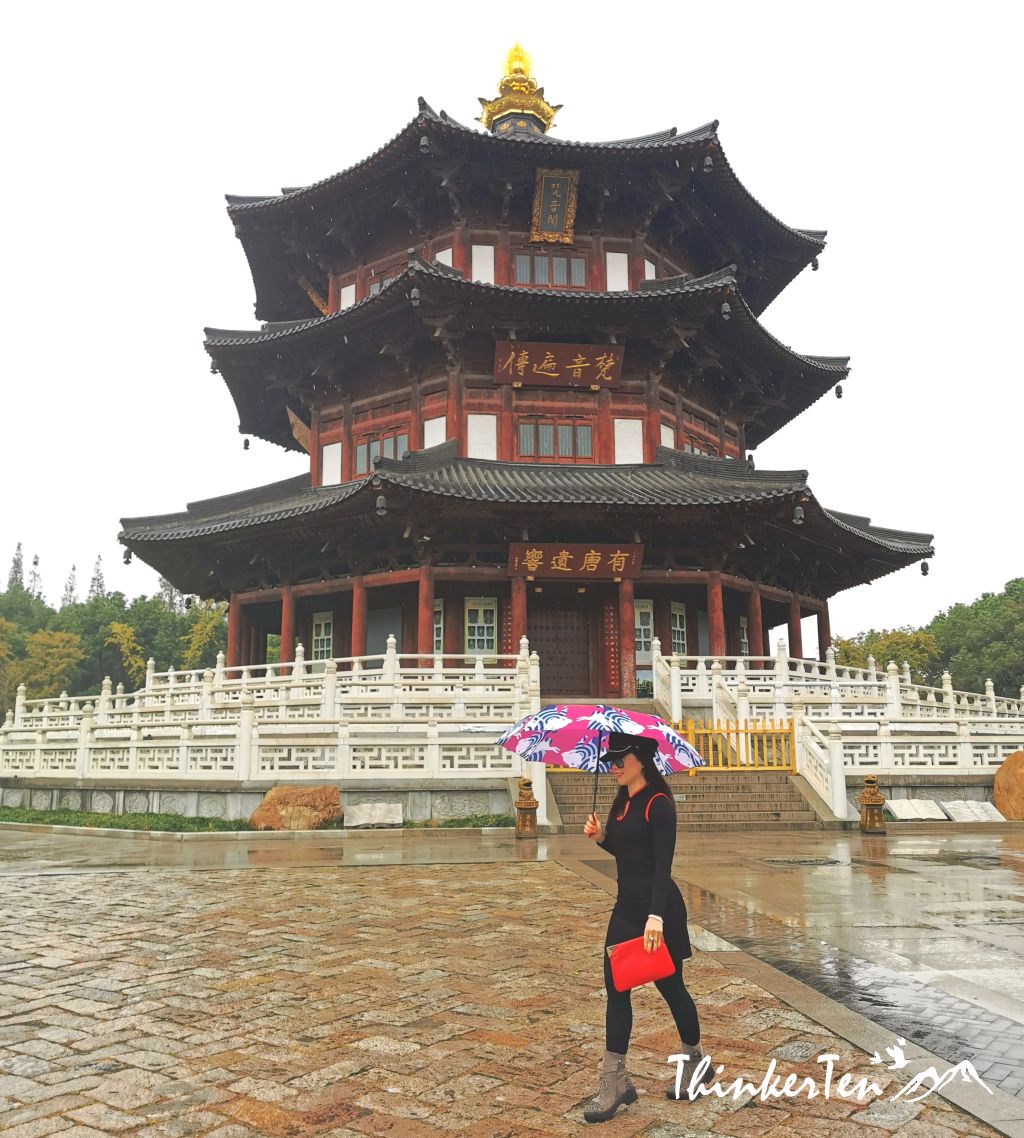 The beautiful China to discover, that of traditions, history and beauty!!!

oh my gosh this is gorgeous i love all your photos! 🙂

I would love to explore all of China one day. It is such a gorgeous country. One day for sure.

That temple looks amazing! I would love to see it in person one day. Maybe on my trip to China. I WILL get there one day.

What a stunning place to visit especially with the temple being more tyhan a thousand years old! Beautiful architecture too

I’ve been to China once but never had a chance of visiting this beautiful place because we are running out of time and aside from that my daughter was already tired but hopefully to see this place once I go back to China.

I love your bright umbrella that pops in the photos. This looks like a great place to visit ,

Another incredible post! The temple is so beautiful…what a gorgeous place!

Wow, this Hanshan temple is so beautiful! I love visiting temples, will definitely check out this place ☺

I have never been to China but it looks so beautiful, just perfect to relax and refresh. Thanks for showing me another great place to add to my bucket list.

Wow, this place looks incredible. There’s so much to do and see there! Looks like a brilliant place to take the whole family

that temple is so pretty. i would love to see it in person one day.

We love calligraphy art so would enjoy seeing all the plaques and decorative artwork! What a fab place to visit x

I have seen this in some Chinese TV series. OMMMMG Now I really want to see this in person.