Join me for a drama-based journey in Hengdian, Zhejiang China! 在横店您也可以体验延禧攻略和甄嬛傳娘娘的滋味！

Have you dreamed of being a star in drama or movie?

In Hengdian World Studio you can.

Many of you may not heard of Hengdian 横店, it is located in Zhejiang China. The city has the biggest film shooting base in the world, many big movies and popular dramas were filmed here.  In China, Hengdian is familiar with the local people.  Mainland tourists, especially from Shanghai, Hangzhou, Suzhou area, love to pay a visit here during the weekends.

There are a number of shooting base or studios based on different themes. On our second day in Hengdian, we visited one of the highlights here the Palace of Ming and Qing Dynasties. 明清宫苑 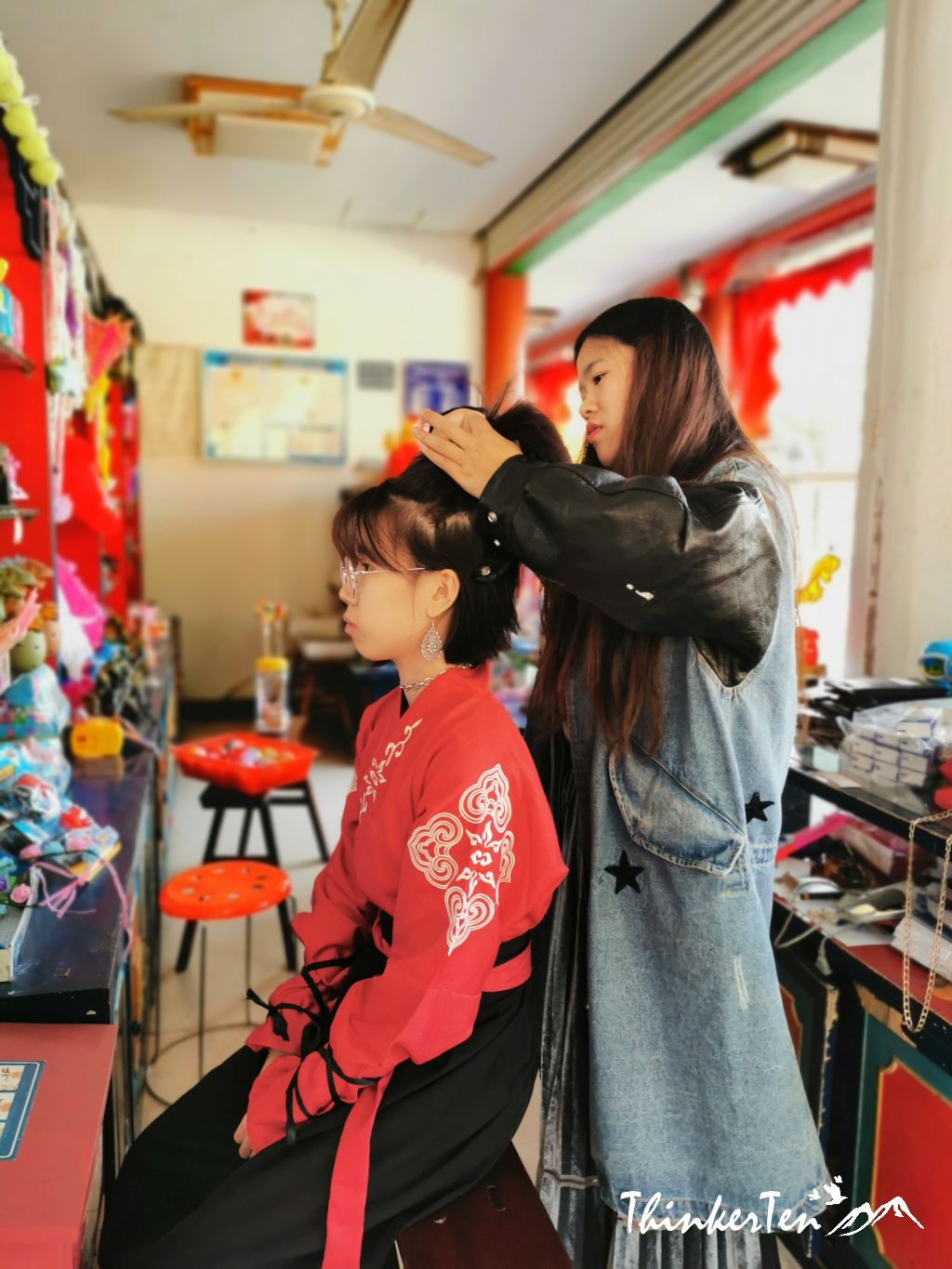 Get your costume ready!

Before we arrived at the entrance of the Palace of Ming and Qing Dynasties明清宫苑, we walked past a shop selling souvenirs and “hanfu”汉服.  We wanted to find a hanfu costume to match with the beautiful backdrops of the palaces so we picked one to try on and bought one. The seller is so kind and helps with the dressing up, including hairdo and free hair accessories.

Do you know Hanfu is the new trend in China?

“Hanfu” has been so popular these few years, you see the revival of this beautiful tradition, almost in every corner of China. Hanfu is not Qipao! Hanfu refers to the historical dress of the Han people for all of history before the Qing Dynasty, they usually mean a long flowing robe with loose sleeves and a belt at the waist.  It usually has a two-piece, top and bottom and both are loose.

One tip if you are visiting the Hengdian World Studio, bring along some traditional clothing such as hanfu.  You can order from Aliexpress or Taobao as there are many varieties and choices there.  There are shops selling hanfu or renting hanfu in Hengdian but you may not find the one you like and can be quite expensive. 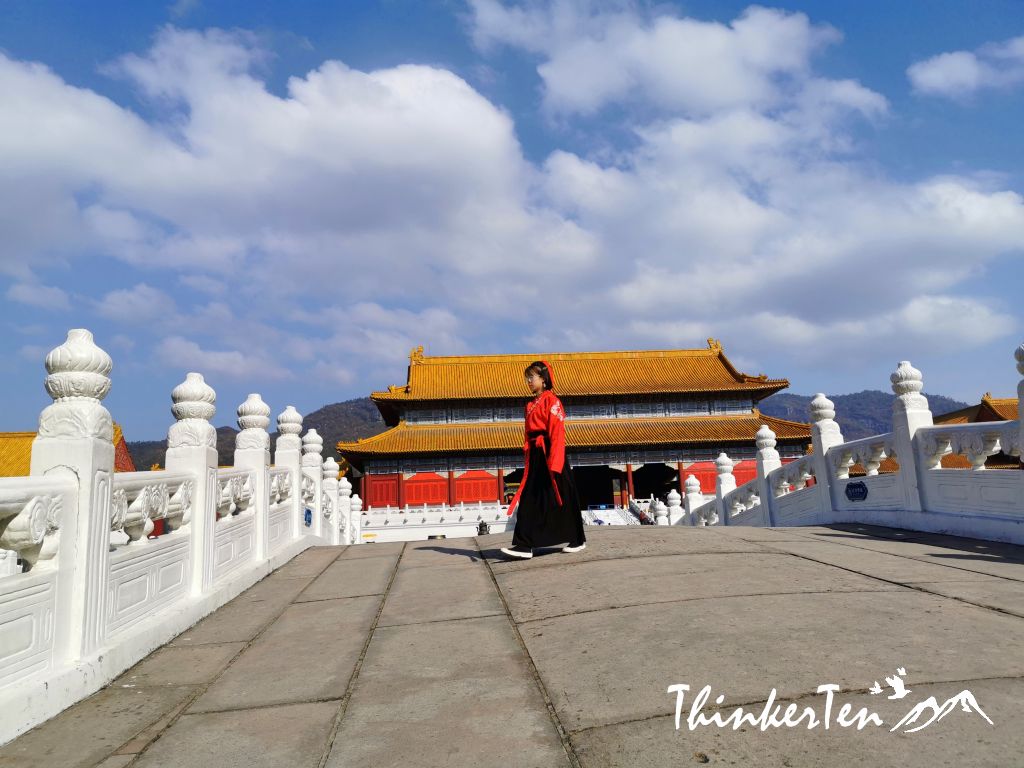 Mine is not hanfu

In case you are wondering what I am wearing, my red dress is not a hanfu or qipao.  It is just a red evening dress with a Pheonix which I think matches well with the Chinese palace theme. 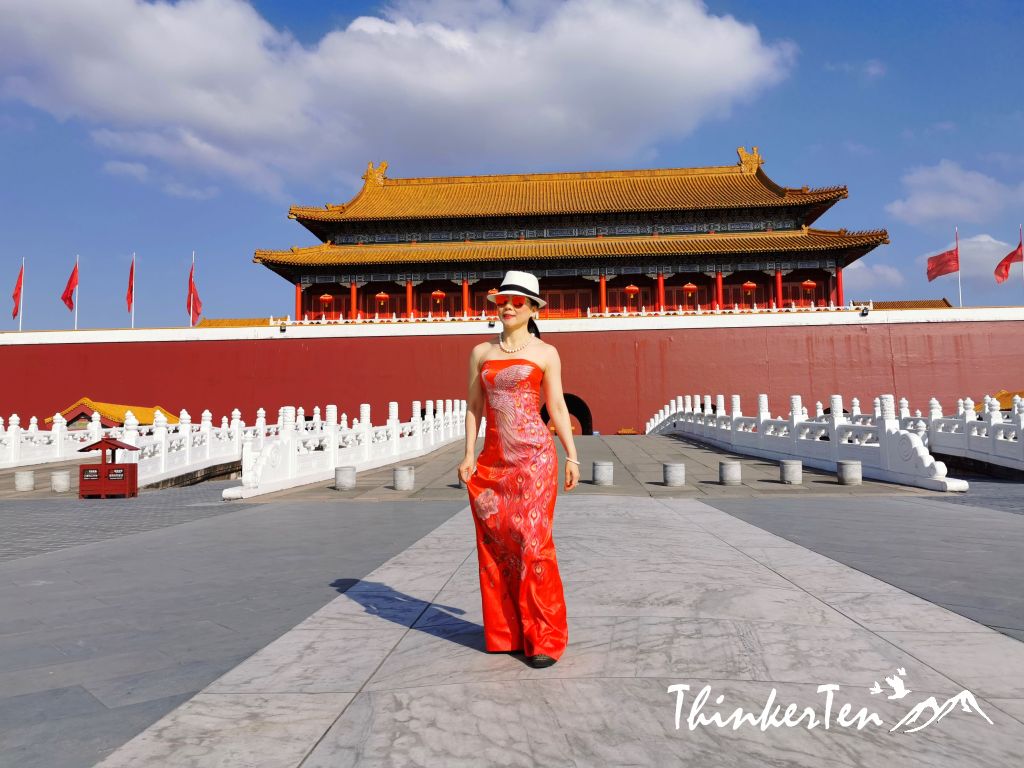 Imitation of  Forbidden City in Beijing

The Palace Garden of the Ming and Qing Dynasties is one of the most classic scenic spots in Hengdian Film and Television City. It was exact same size ( built 1: 1 ) based on the Forbidden City, and it is also the largest film and television shooting base in Hengdian! 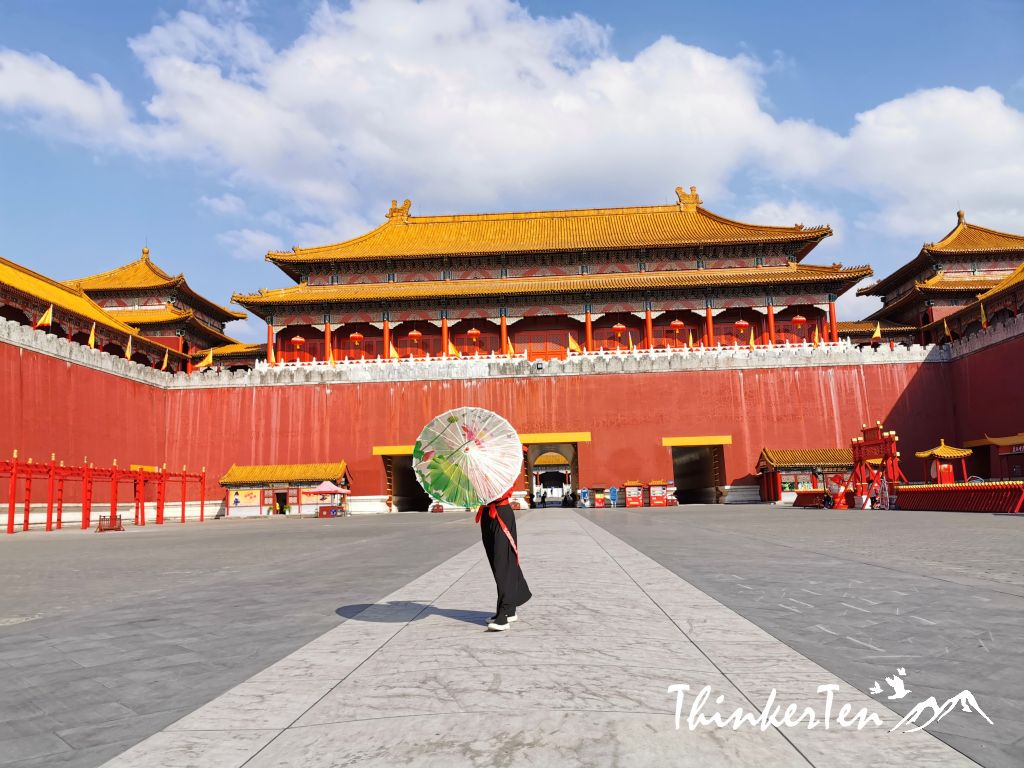 The interior includes four major architectural series: the Beijing Palace, the Royal Garden, the King’s Gate, the Hutong House, and other landscapes, including Qipan Street, Qianbu Gallery, and Wenwu Terrace.

Remember to visit the palace from left to right so you don’t miss all the excitement. 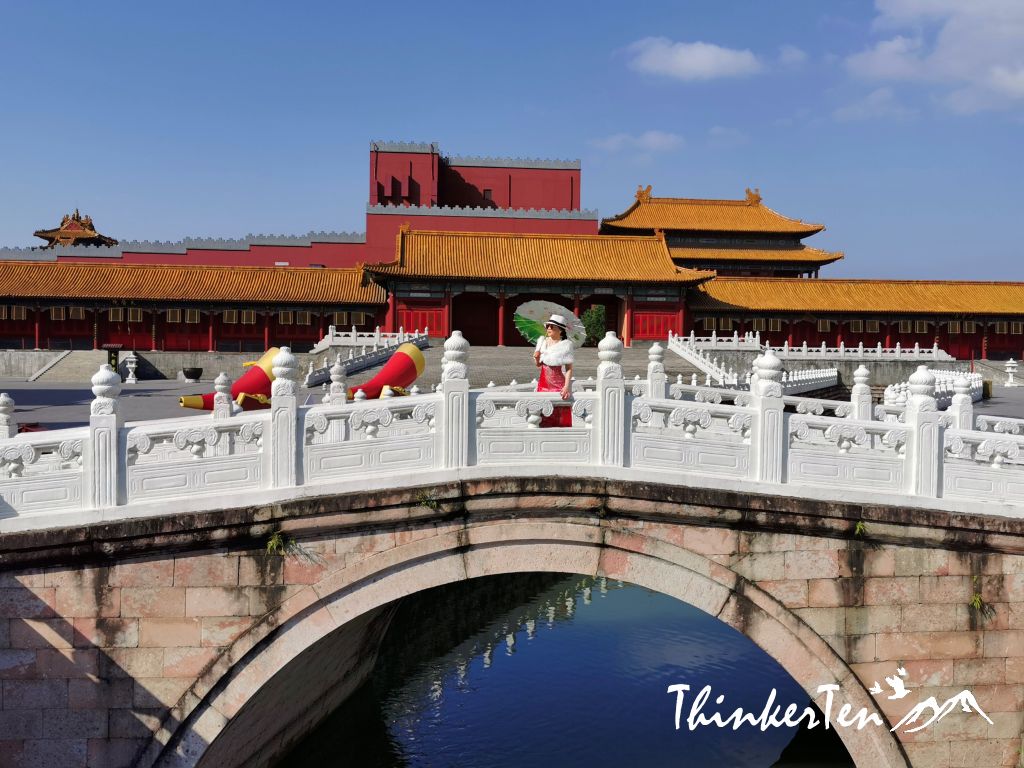 If you have watched the recent hit drama, “Yanxi Palace”延禧宫略, you can really find a lot of familiar shooting scenes here. 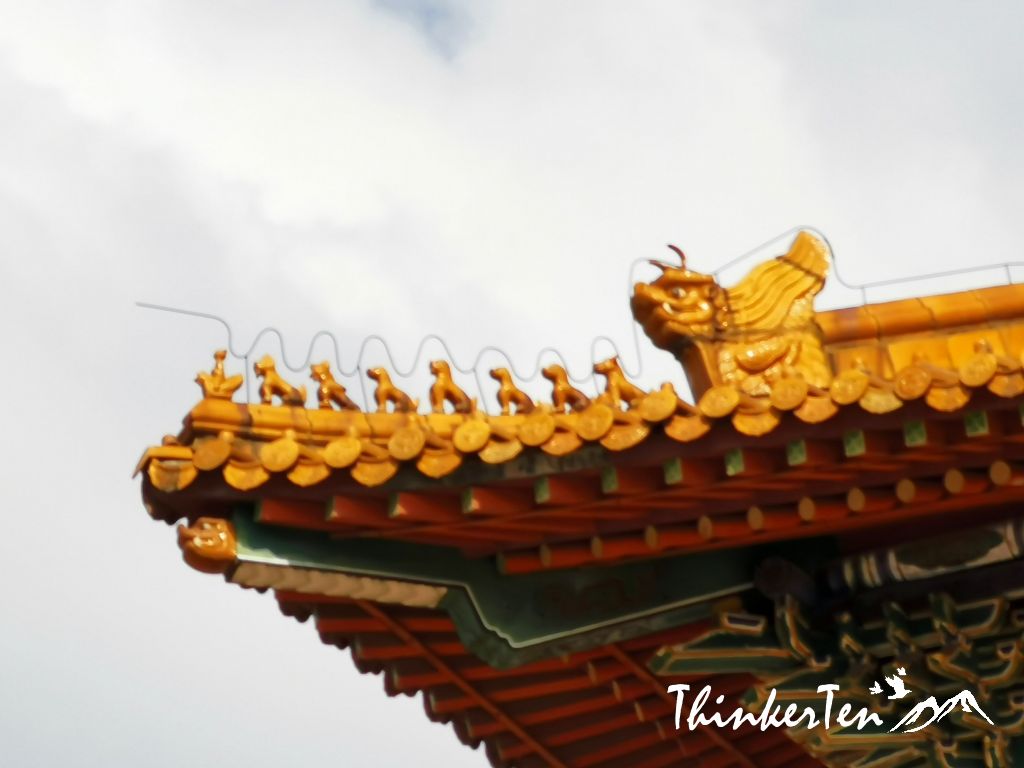 It looks the same as the Forbidden City in Beijing except, fewer people during my visit as it was winter month.  There are peak and off-peak.  Peak period is during China’s public holidays.  If possible, try to avoid these periods. 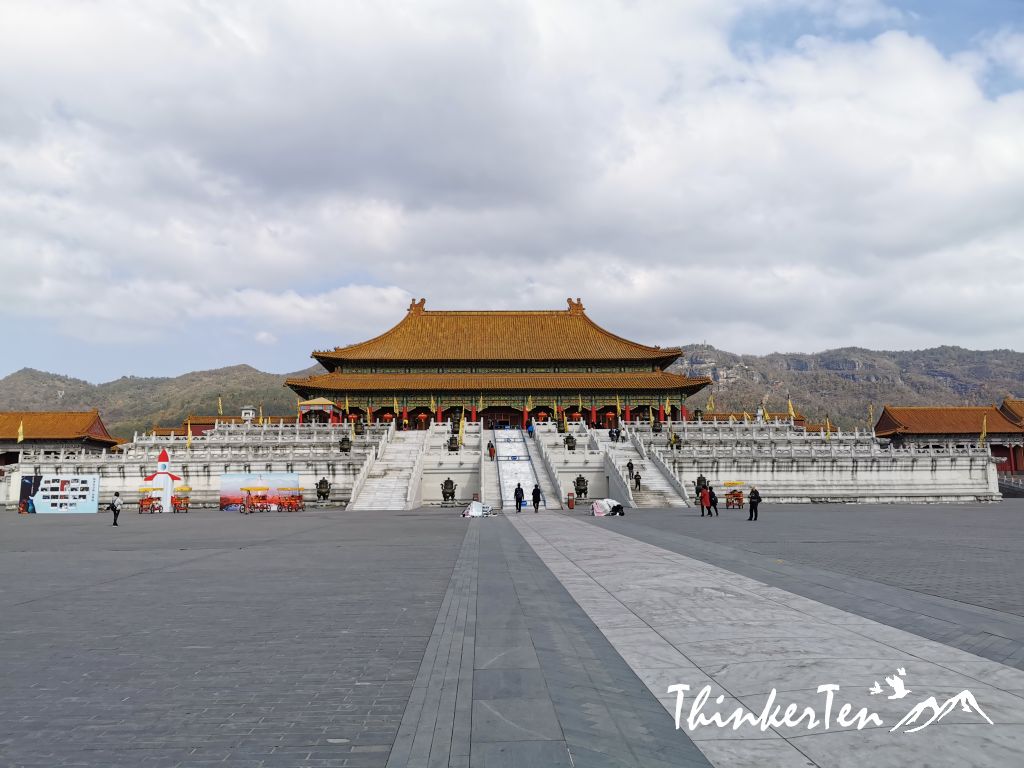 How much time do you need in Ming & Qing Dynasties Palace?

It took us about 4 hours. 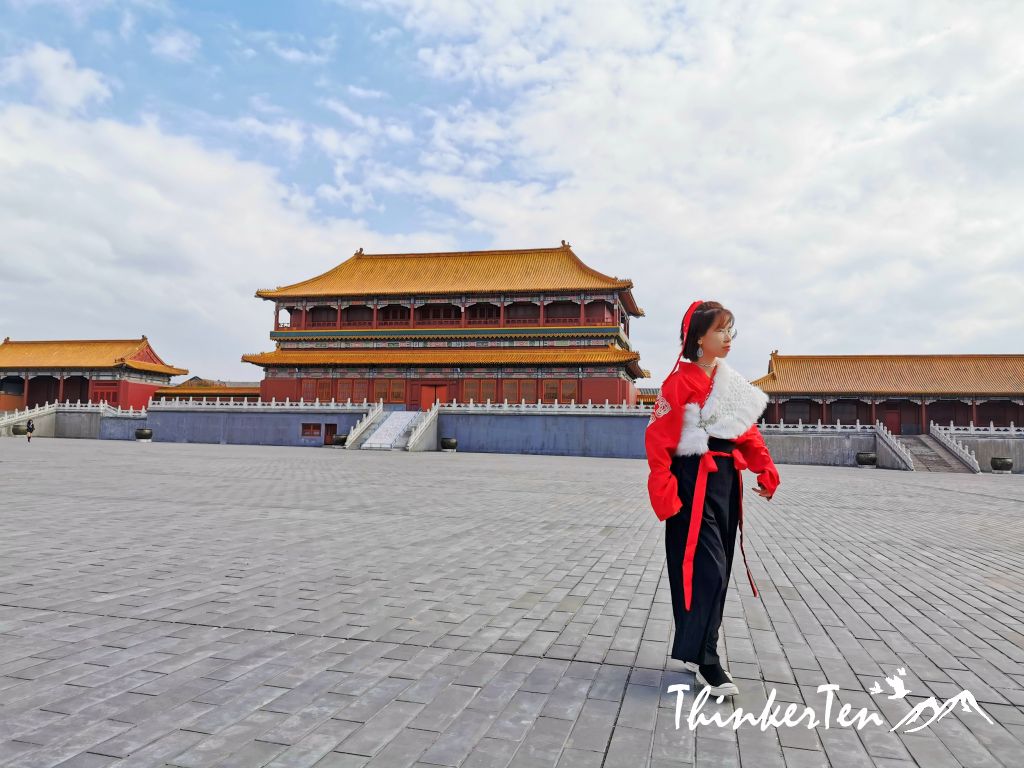 Who should rent the Bicycle?

There are bicycle renting at the entrance, we hesitated for a while if we wanted to ride the bicycle.  The seller lowered the prices from RMB 100 (SGD 20.00) to more than half but we still walk away.  We didn’t want to rent the bicycle because we don’t know where we should stop and park and we don’t want to spend time searching for our bicycle in case we forgotten where we parked the bicycle.

I saw some young people renting the bicycle and ride around the palace, it seems quite fun.  If you have  4 strong and young adults, it should be fun to ride the big bicycle. 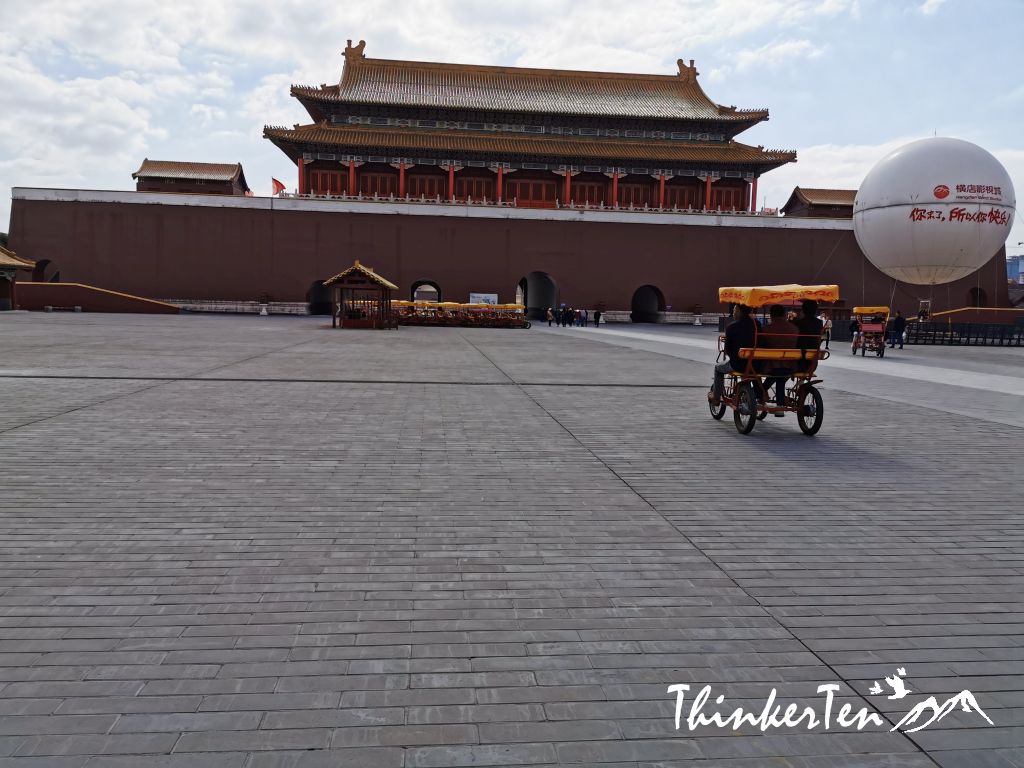 How do I feel?

It feels so good to walk inside the palace studio with the traditional costume. I feel like stepping back to the Qing Dynasty. Most importantly, I felt like a queen or Niang Niang 娘娘 that is how you call it in Chinese. 🙂

The whole atmosphere was just awesome with the music of famous hit drama like 甄嬛傳 Zhen Huan Chuan. 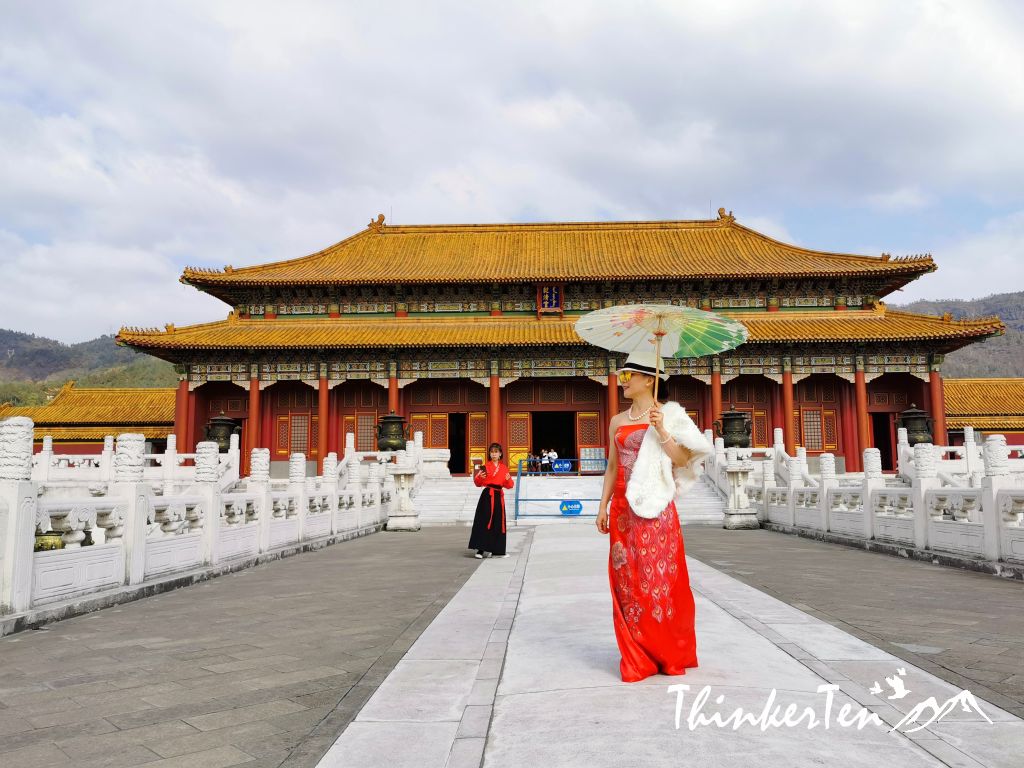 Costume renting is available inside the palace, the price isn’t cheap, about RMB 50 (SGD 10).  A photographer will help you take the picture on the dragon chair.

I suggest you bring your own costumes as the costumes there do not look very clean and nice.  The clothes are big as one size fits all.  I also don’t like the photo is only taken indoor.  You are not allowed to wear the rented costume to go outside and shoot pictures. 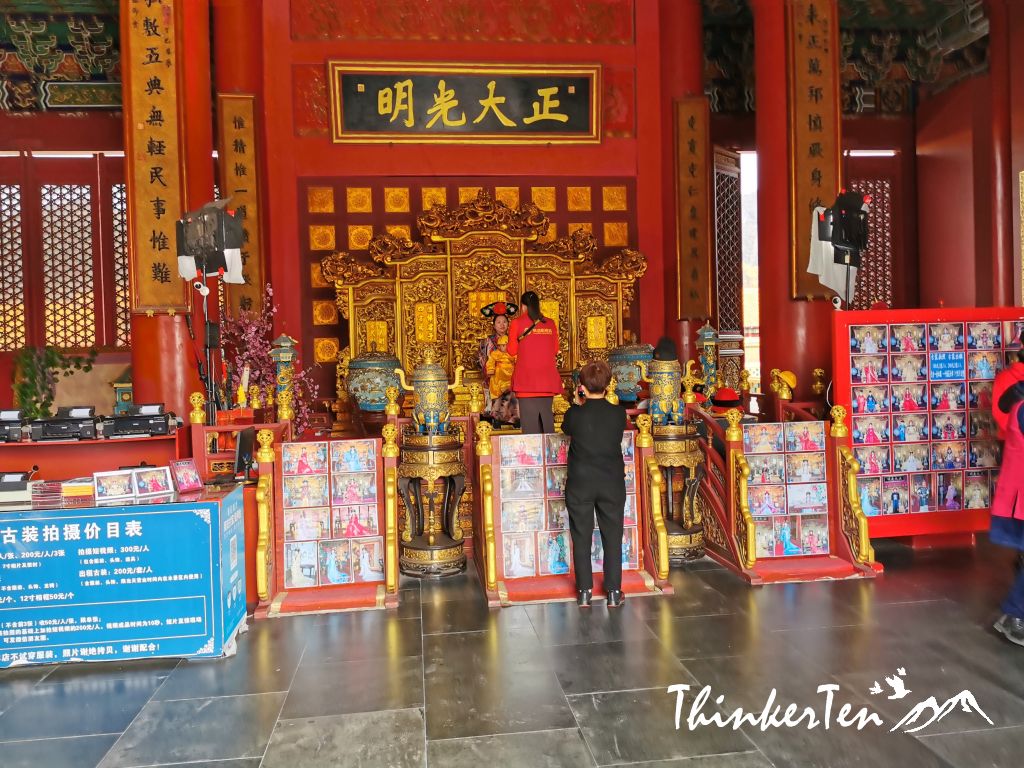 You should not miss the highest point of the Qing & Ming Dynasties Palace.  If you watched the Yanxi Palace drama, there was a scene where the Queen killed herself by jumping down the rooftop.  You can actually go up there and you will see a beautiful view from the top (the rooftop view is awesome)!  During my visit, I could not go up due to some restoration.

You can see how the drama is being filmed

If you are lucky, you will meet some celebrities as real drama is shooting here.  You can view how the movie or drama is being filmed and please do not make any noise.  You are not allowed to use your handphone to take pictures while the filming is going on.

There are several scheduled performances in the Ming and Qing Palace every day. You should check the performance schedules at the entrance so you don’t miss any.

There were four performances in the Palace Garden of the Ming and Qing Dynasties, divided into two performances each morning and afternoon.  But I suggest you still check on the daily schedule as it may change. 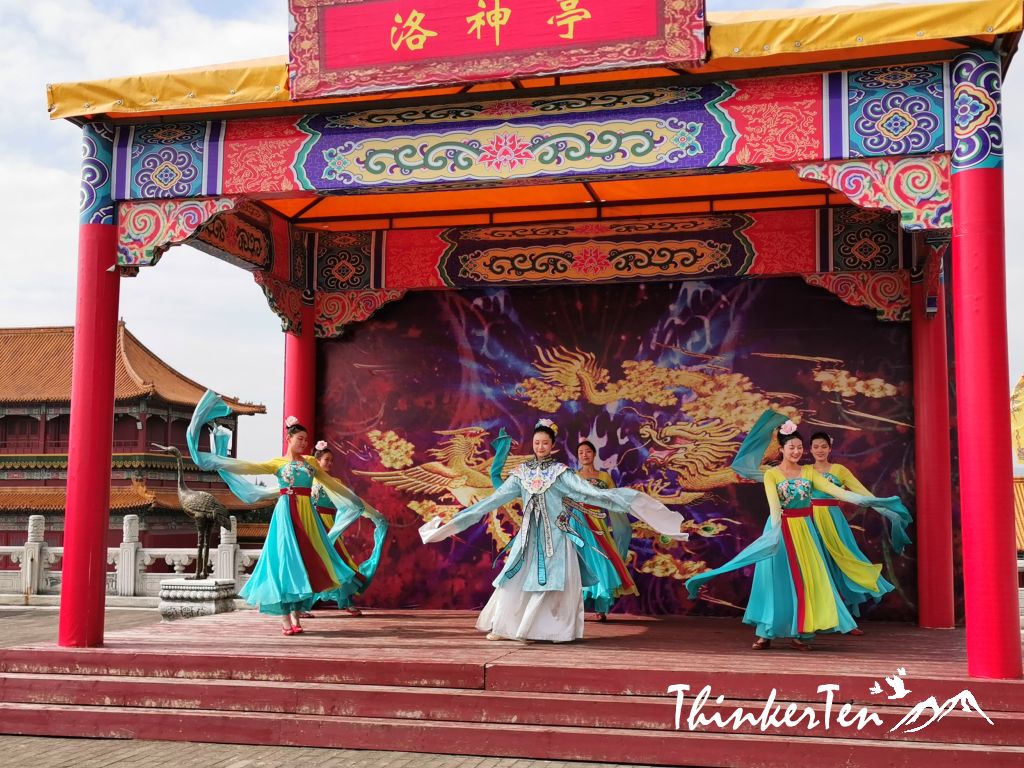 There are many limitations if you were to visit the real Forbidden City in Beijing, many of the halls are not allowed to enter and can only look from outside. However, over here there aren’t many rules, you can go into each hall and check out what they eat and how the princess or queen taking their beauty bath.

You are not allowed to go in only if there are film shooting. 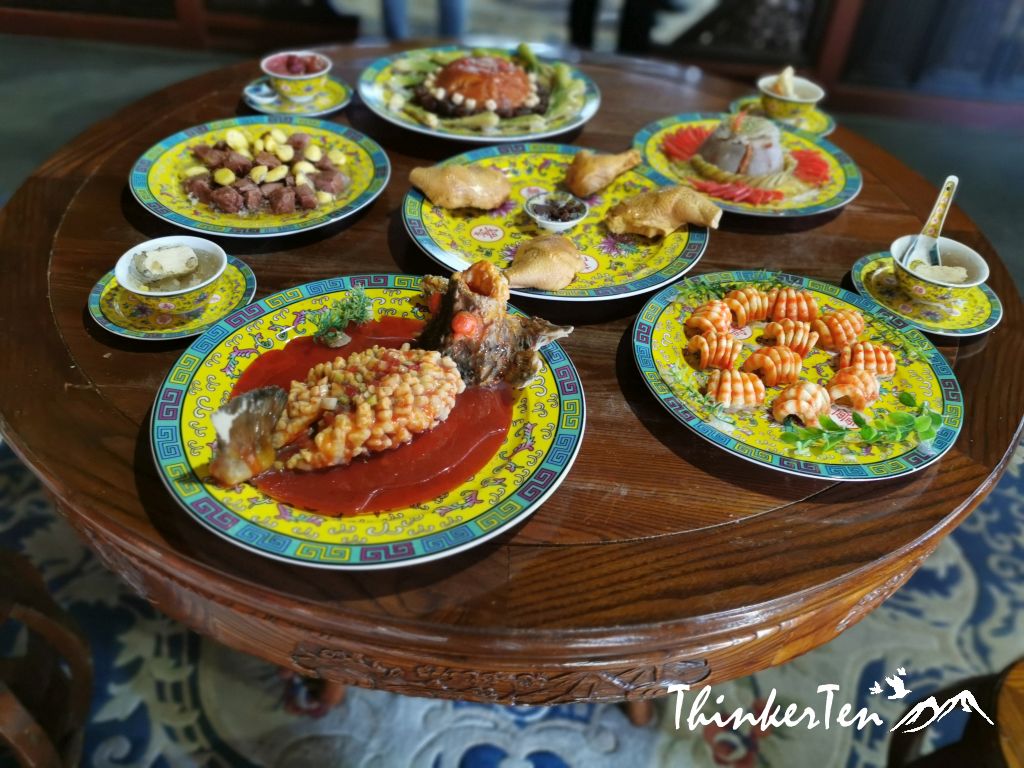 You can fulfill your dream as an actor or actress here!

Mirco Movies are available just made for you!

These micro movies focus on shooting customized films for tourists. It allows tourists to experience film and television tourism in-depth and also provides a fun “acting addiction” for ordinary people with the actor dream. The price range from a few hundred yuan to a few thousand yuan (RMB) to make your film. You can get your production within half an hour. 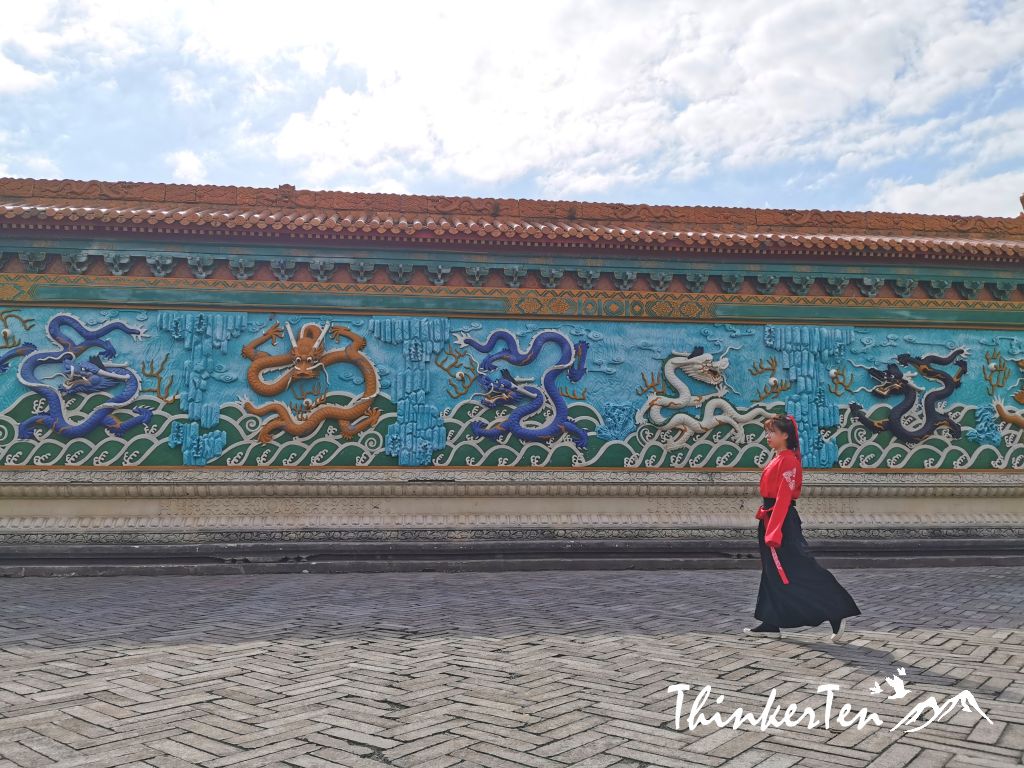 There is a little ring for horse riding.  We choose a white horse to ride.  You need to pay to ride on the horse, it is not included in the entrance ticket. 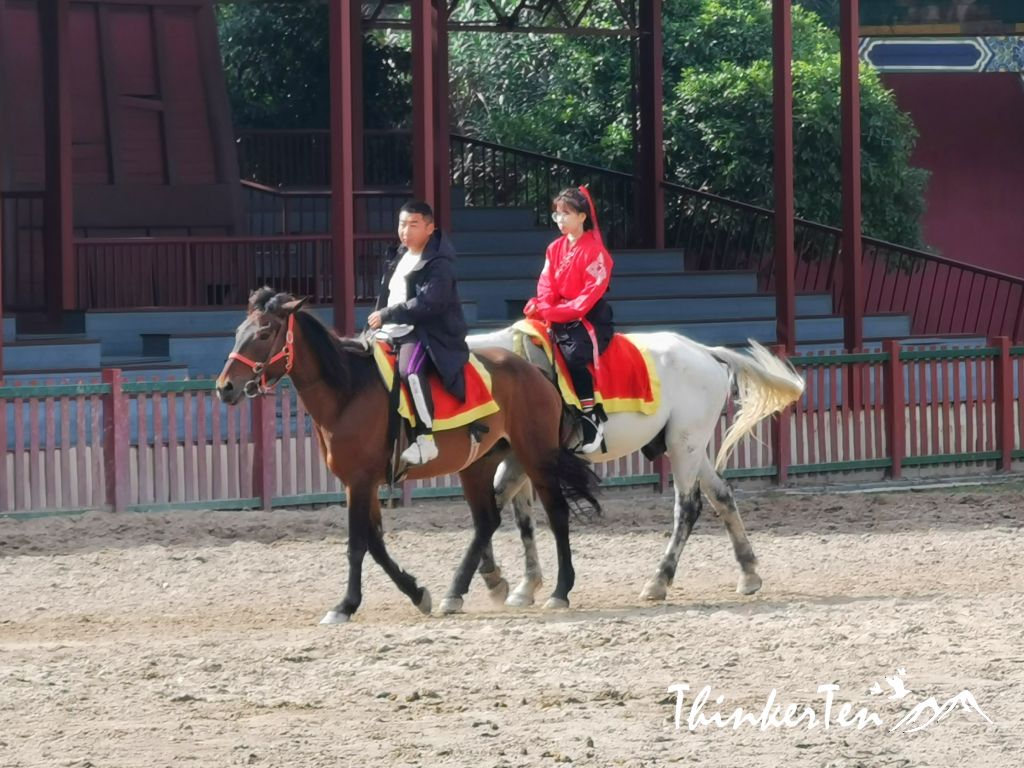 There aren’t many eateries in the Ming & Qing Dynasties Palace once you entered, but there are snacks and drinks available but cost a little more than outside. 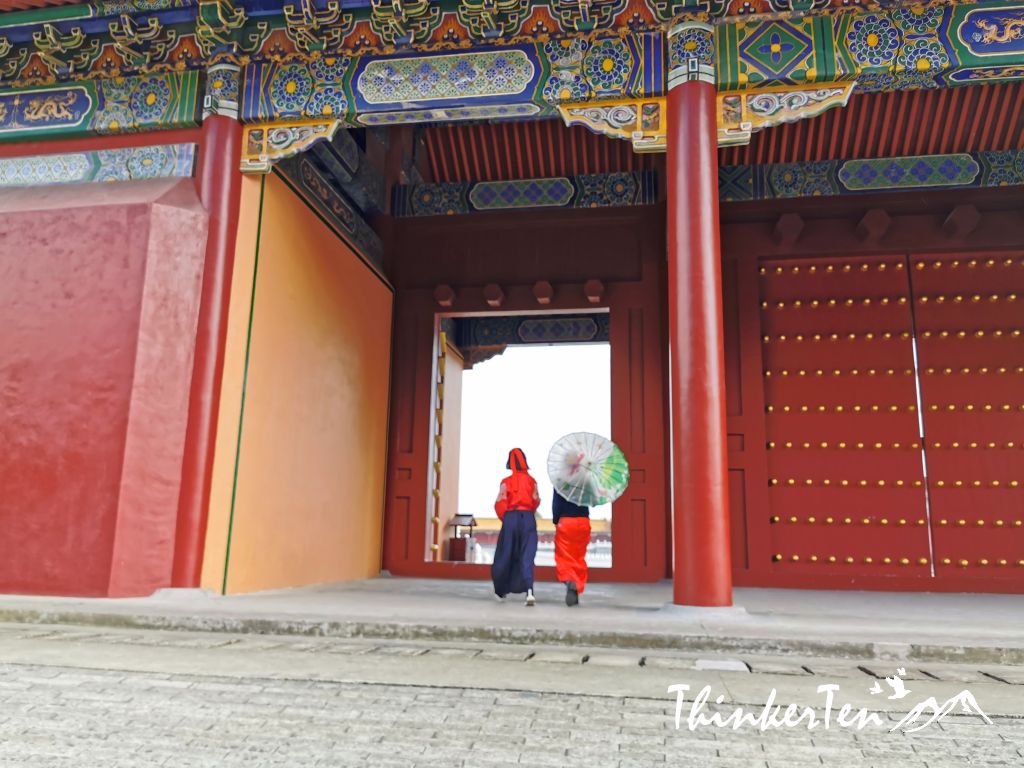 Have you heard of Heng Piao 横漂?

Heng Piao 横漂 refers to people from other places who participate in film and television drama shooting in Hengdian. Every year, about a hundred film and television dramas are filmed in Hengdian, and Heng Piao are the people who came from all over China waiting to be crowds actors.  Their dream is to start as a crowd’s actor and eventually end up with the main role in the drama.  There are only a small percentage of successful cases for Heng Piao but not all turn out good.  Some think that being a crowd actor is easier than farming in the field back home and the crew also provided free meals if you get the role that day.  Pay isn’t high but most importantly they think it is fun and interesting and maybe can turn out to be superstar one day. 🙂

Wenwu Arena is where the heroes or warrior fight in the olden days.  All sorts of competitions held here. 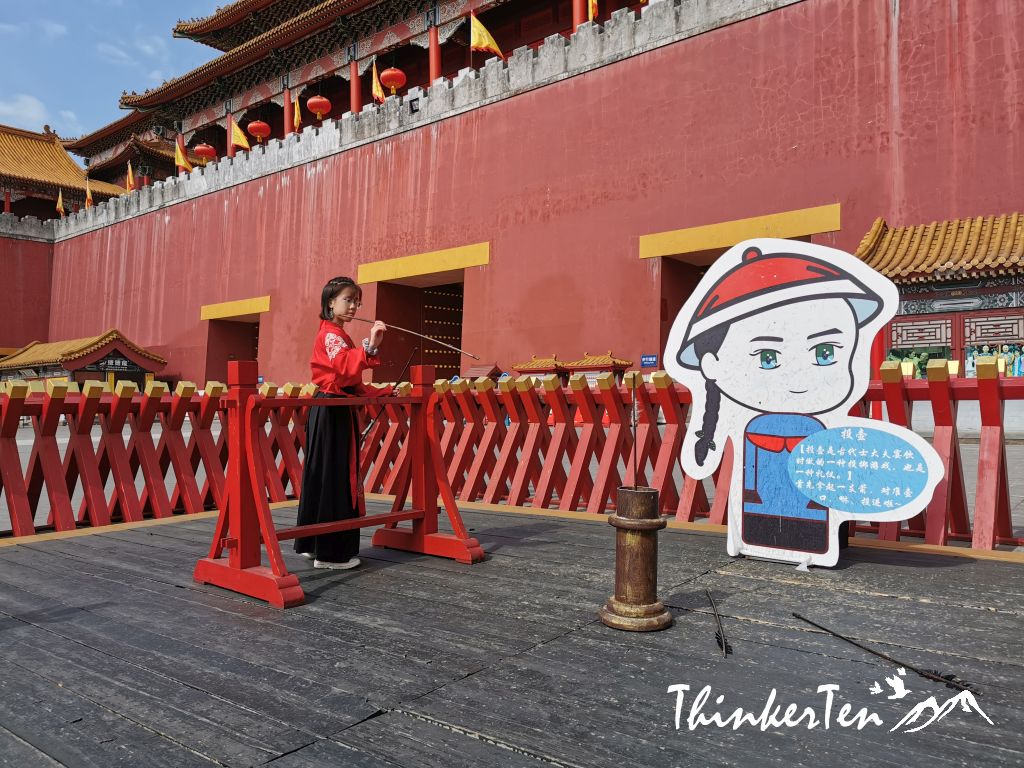 You are allowed to play with all kinds of ancient weapons here. 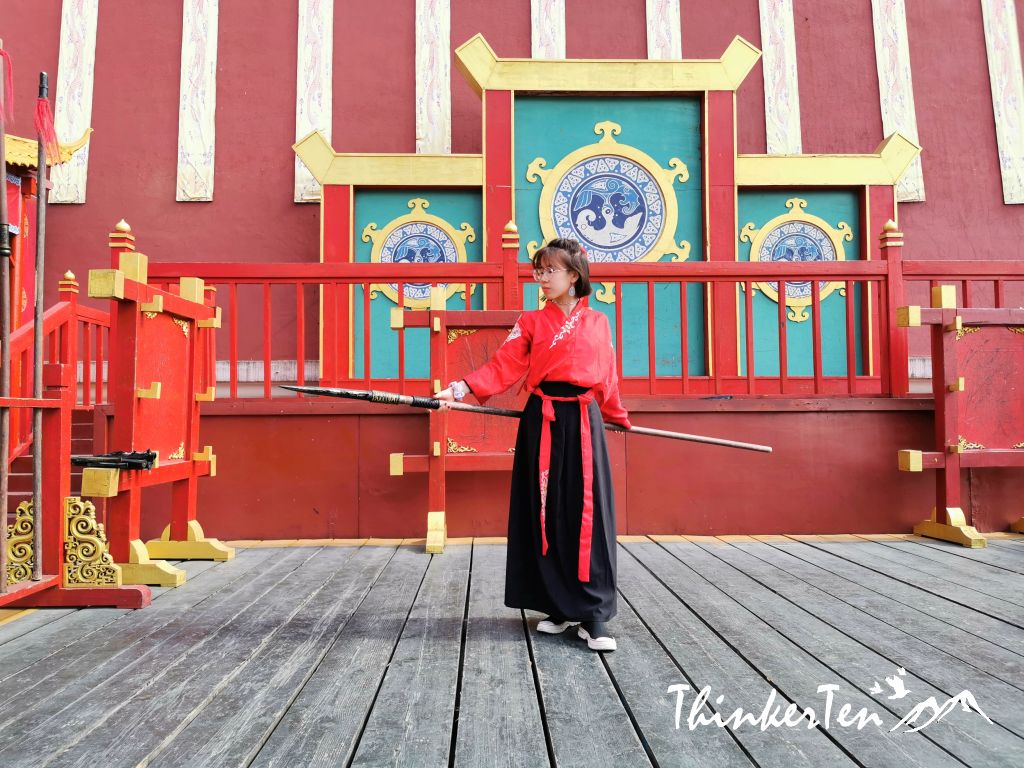 How to visit Hengdian World Studio?

There are free shuttle buses in Hengdian city that will bring you to most of the studios and sites.  Once you check-in the hotel, a free transport card will be given by the front desk.  Show it to the bus driver to get the free ride.  If your hotel does not provide the free transport card, you can pay RMB 1.00 (SGD 0.20) to get on the bus.  Have the money ready as there is no change given. 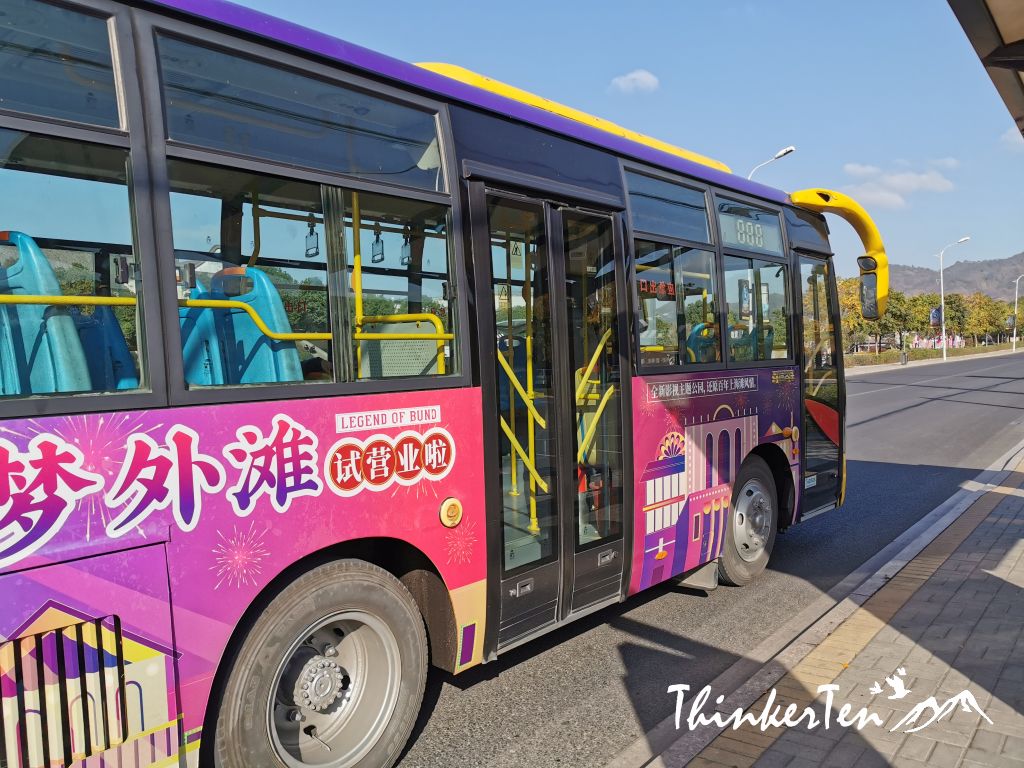 Who should visit Hengdian? 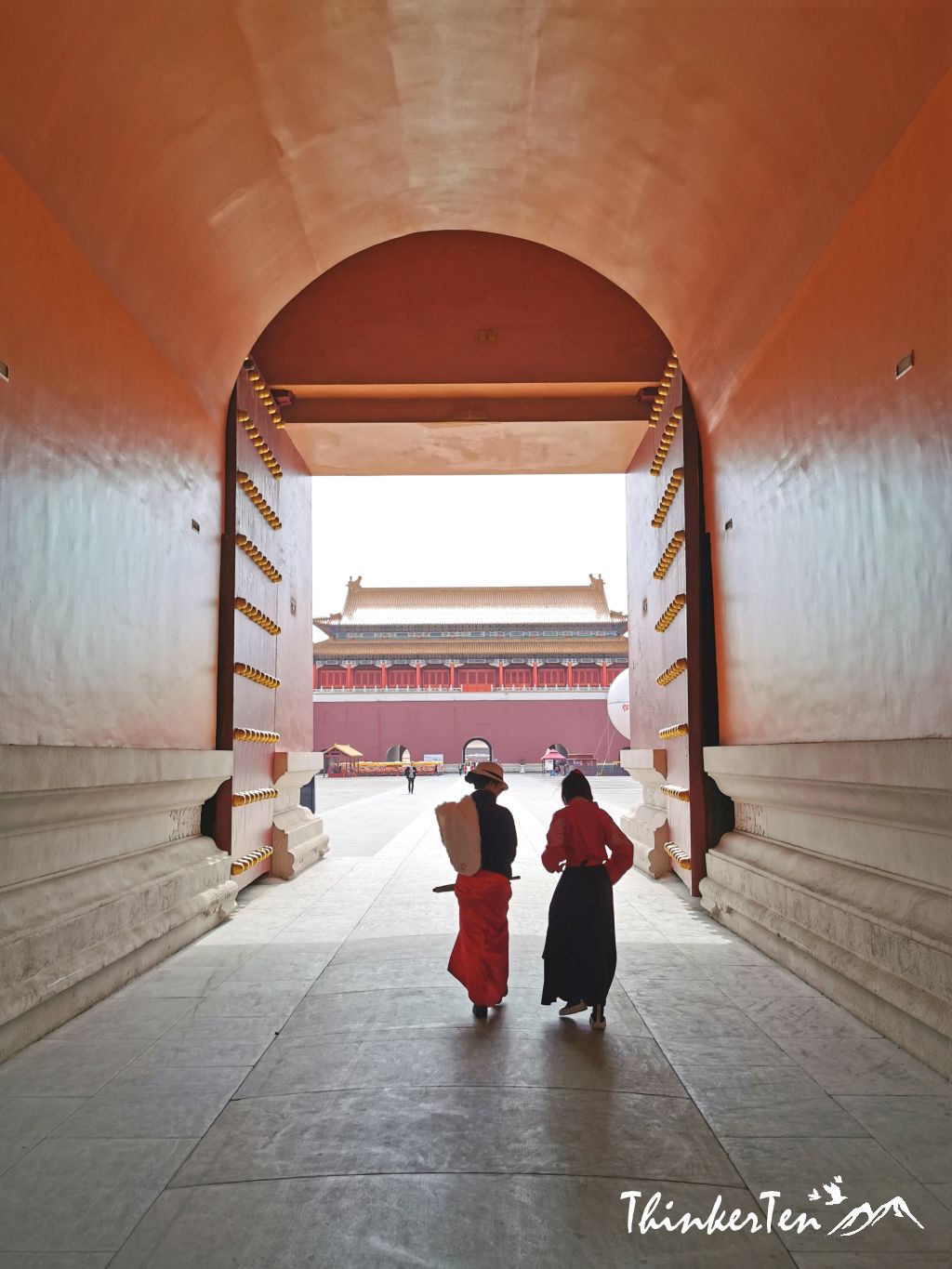 There are a number of studios in Hengdian with a different theme and Ming & Qing Palace is one of the biggest of all.  The size is exactly the same as the Forbidden City in Beijing.

If you love Chinese period drama, you have to visit Hengdian.  The whole city is lifely because of the movie/drama industries here.

In Hengdian, you can experience a drama based journey and fulfilled your Princess or Queen’s role. 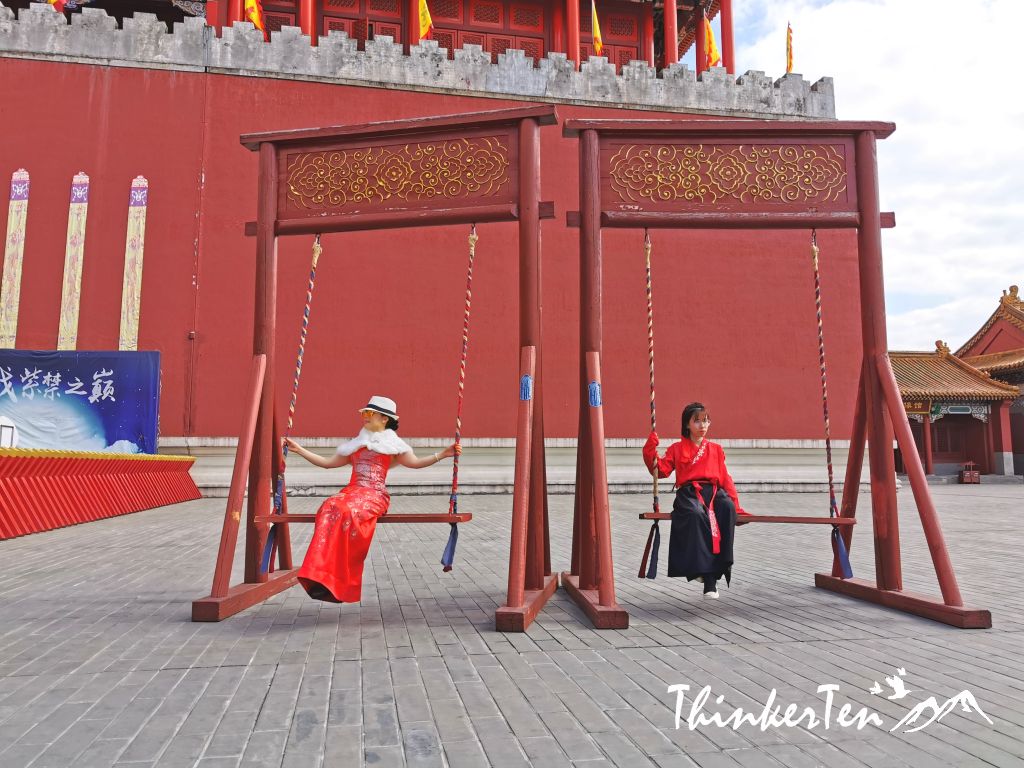 I’ve only visited Hong Kong, and so would love to visit the mainland. This place is incredible and I love the history here. Your dress is beautiful too, and I love the colour!

This place looks so incredibly beautiful and I would love to visit. Your dress by the way is stunning

I think this is exactly the world and the attitude with which to make such a journey. The history and vibrations it gives off are the best memories to take home.

I’ve never heard of that city, but now I want to visit! I loved all of your outfits too.

what an amazing location and backdrop for films! We can see why its a great location. We love seeing people in the historical dress!

What a beautiful place and experience! I’d love to see it in person one day….truly lovely!

I wouldn’t have thought about the holidays so thats good to remember when I visit.

Looks like a stunning place to vsiit, so full of history

Omg looks like you had one incredible trip!! I would love to visit China one day!

It seems like you had an awesome experience there. That place is really a most visit place.