“Japan has its Shinkansen in the 1960s, they called it bullet train over there. In China, they started pretty late, in the late ’90s. It was after Deng Xiao Ping’s visit to Japan in 1978 which inspired him to make changes to the country and made more reforms. In one of the videos captured a moment on the trip, Deng can be seen sitting in the window seat of the shinkansen (bullet train) as the countryside races by. He looks like an enthusiastic child on an adventure.

China purchased high-speed rail technology from overseas at first, such as Canada, Japan, and Germany. They dismantle each of the trains and then study the whole structures and remake their own. Now, China has built the largest high-speed rail network in the world. Large numbers of people are now able to travel more easily and reliably than ever before. 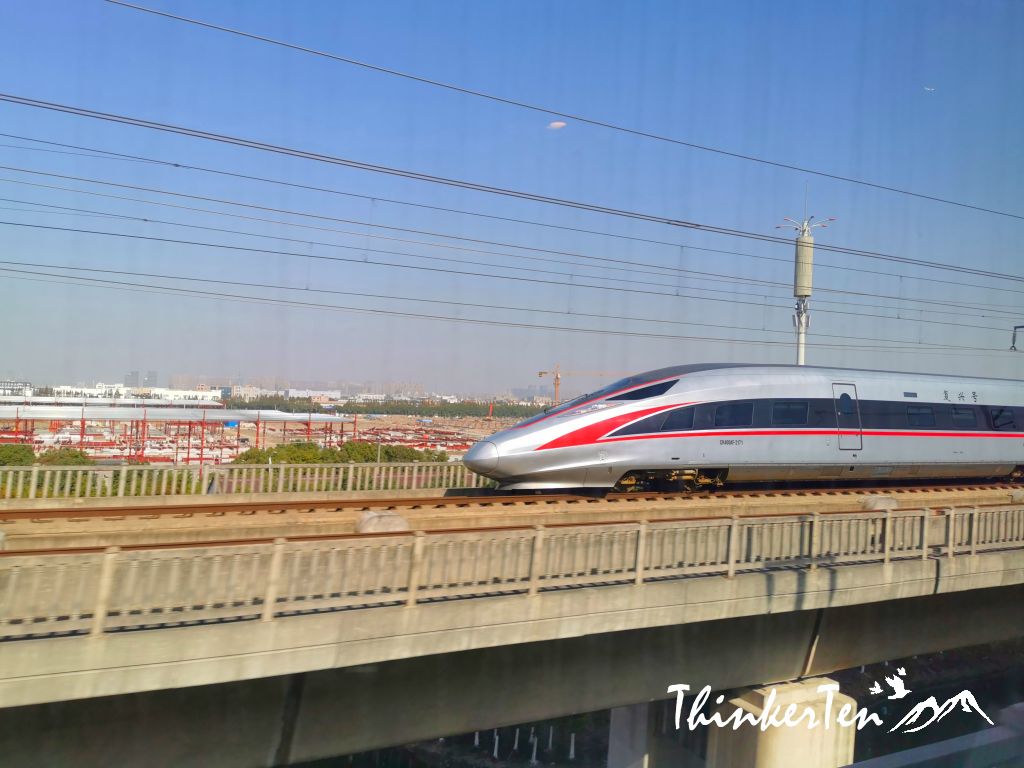 We planned our China trip with high-speed rail connecting few cities we wanted to visit. And in each route, we like to experience a different kinds of seats. There are in total about 3 kinds of seats, the Business class which is the most luxurious, followed by the First class and the second class. From Suzhou to Yiwu city, we traveled with second class, also the cheapest. The second class seats cost less compared with the first class. It has 5 seats in a row, as compared to the first class which has 4 seats in a row. The second class seats are suitable for families with young children, the seats are narrower. Budget travelers can also consider the second class. 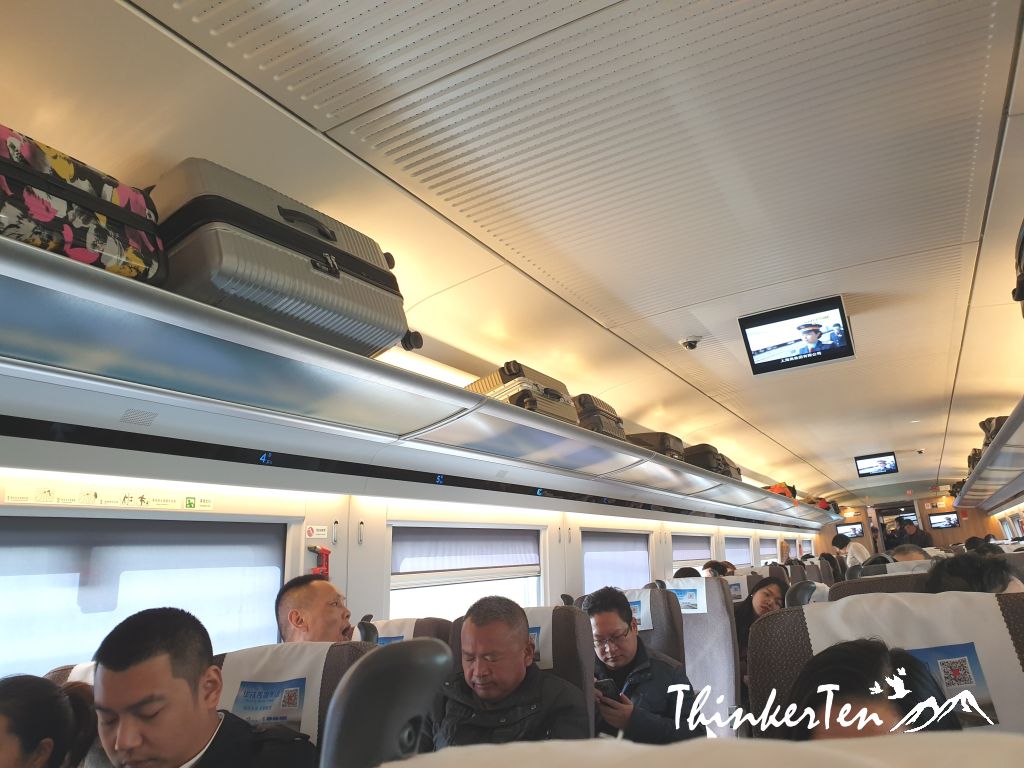 Where to put your luggage?

The luggage racks are above the seats on each side of the coach, if your suitcase is as big as 28 inches, you can put it on top of the rack. The seats on the second class carriage are very narrow so I don’t you can sit comfortably if your suitcase is placed near your feet. If you have huge luggage, you can place them on the closet which is located at the connection of two coaches, behind the last row of the seats. 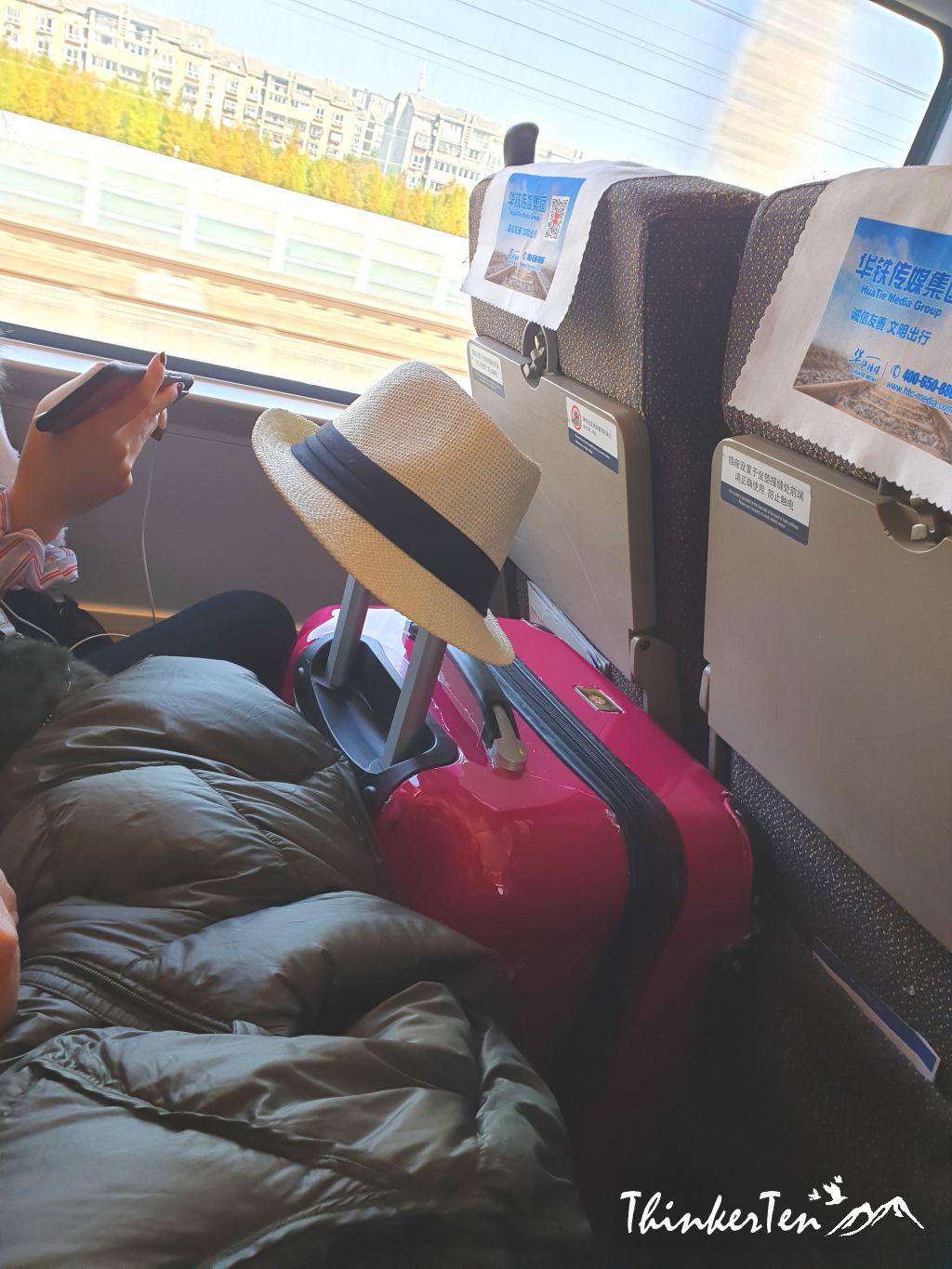 The water dispenser is provided at every connection part of the train carriage. Most carriages offer both Chinese and Western-style toilets. The toilets on China’s high-speed trains seem to be always clean and odorless. I was surprised toilet paper is prepared too. Train attendants can be seen walking up and down a few times to collect any trash from the passengers and make sure toilets are clean. 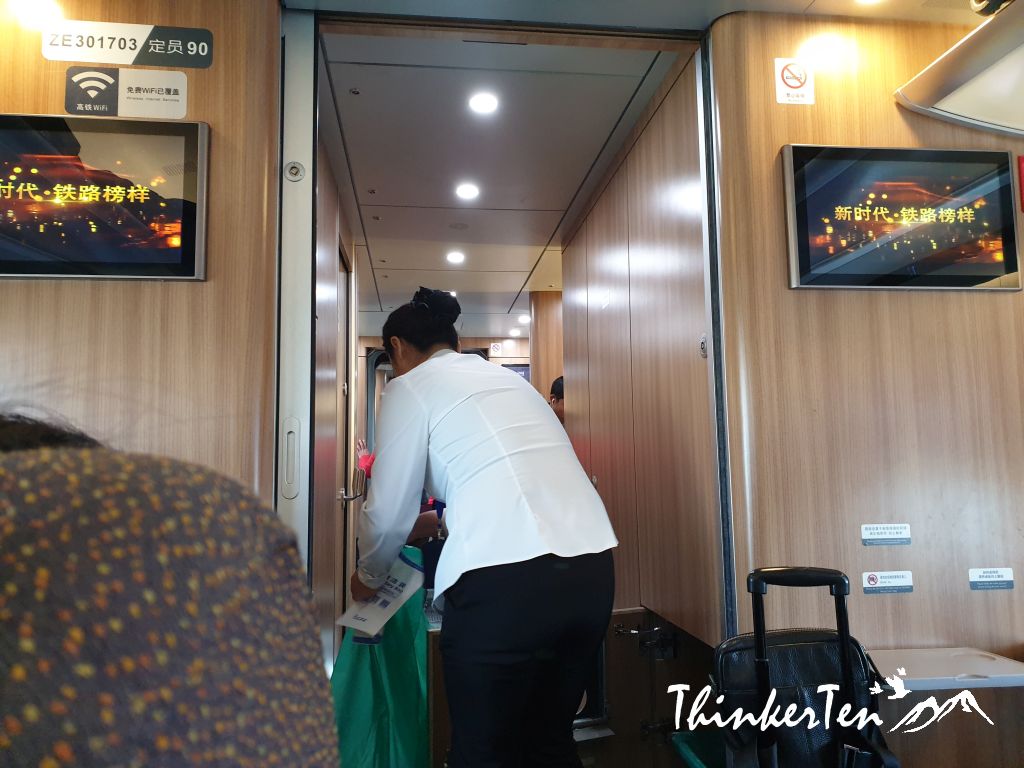 Now, let’s start from the beginning and learn how to collect your paper ticket after you have booked online.

How to collect your high-speed rail ticket?

Foreigners are still able to book online from third-party agencies, such as Klook or Trip. I would suggest you go searching with Klook first as it has no handling fees but only cover major cities, whereas Trip covers bigger ranges of cities and towns but has to pay a small handling fee. (Only USD1-2 dollars) 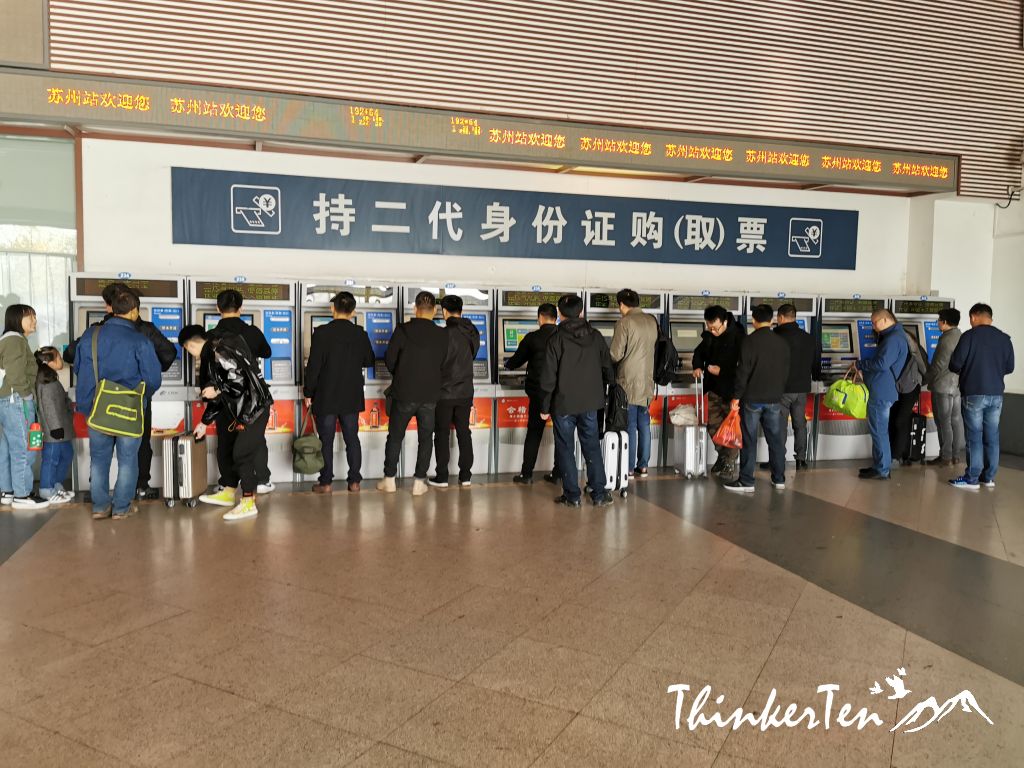 Even you have booked online, you still need to get your paper ticket before entering the train station. China train station is big so always come early, at least 2 hours before departure as you still need to find the place to collect your ticket. Expect lines if you come during peak seasons, eg China holiday and weekends. Alternatively, you can always pick up your ticket in advance, not during the day of the departure. 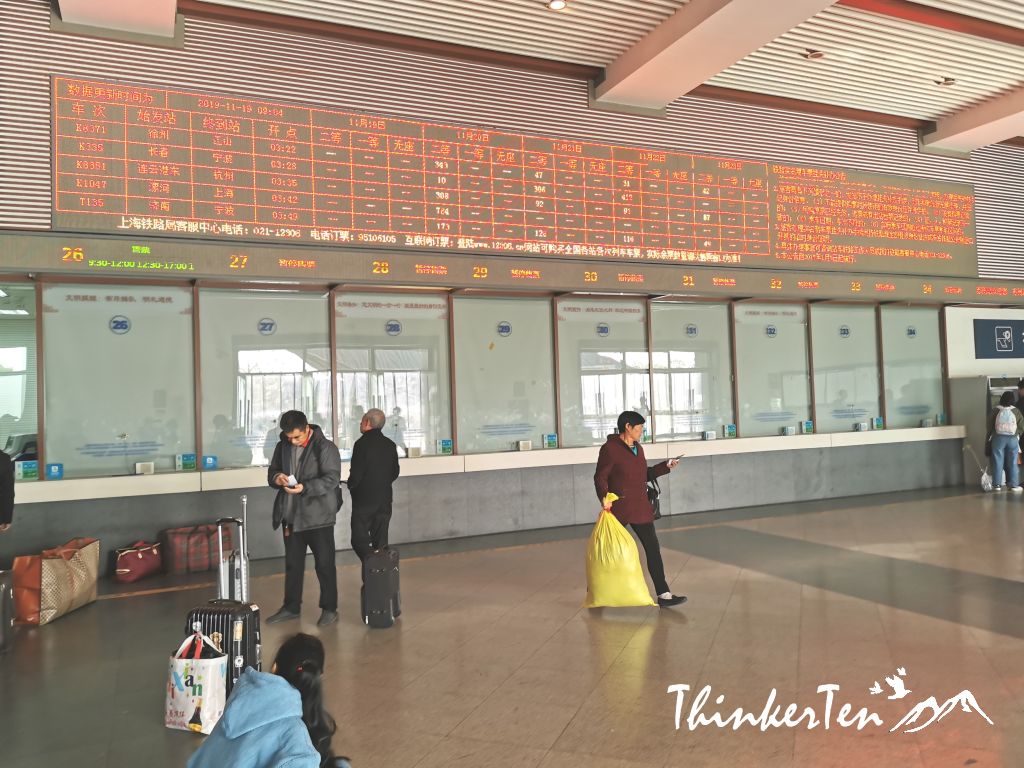 Foreigner cannot collect your ticket from the automatic ticket machine

At the counter, please show your passport to the window staff. For Chinese nationals, they can collect their tickets at Automatic Ticket Machines, train stations, and ticket outlets as they have the Chinese ID card. For foreigners, we have no way to use the automatic ticket machines but have to go to the counter that is open to get our paper ticket. 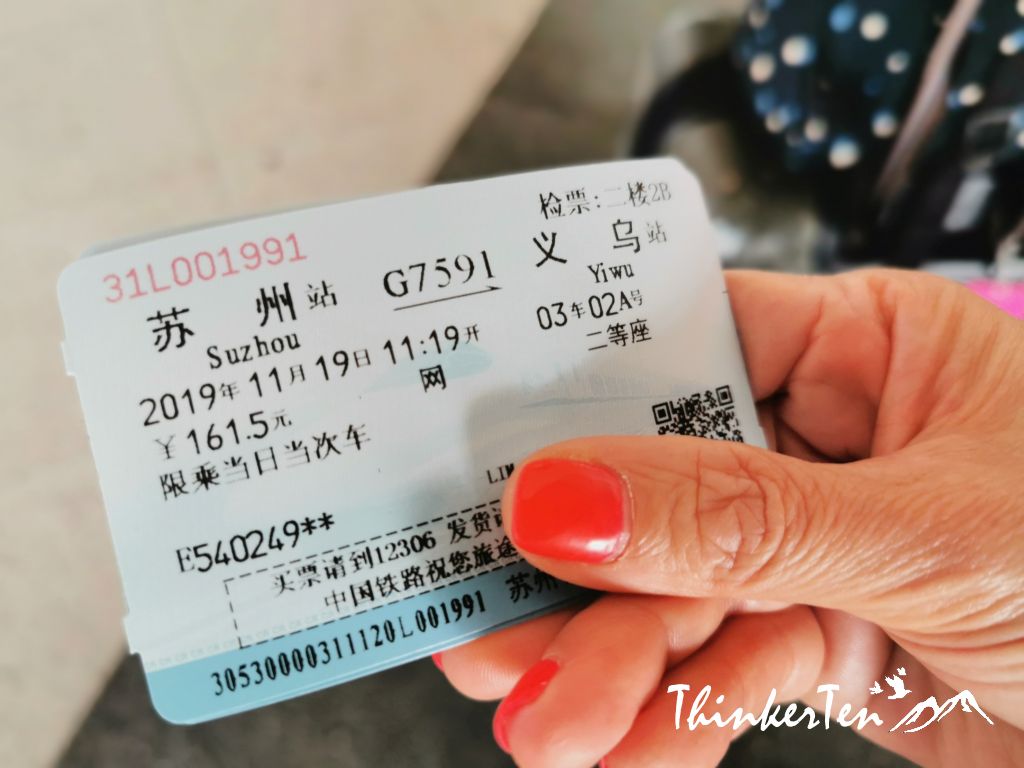 Security Checks at the entrance of train station

After you have gotten your paper ticket, you can now go through the security check at the station entrance. Visitors are not allowed to enter the station without the train ticket. Please also prepare your passport ready.  Your friends can only send you off up to the entrance of the train station.  They cannot go in together with you. 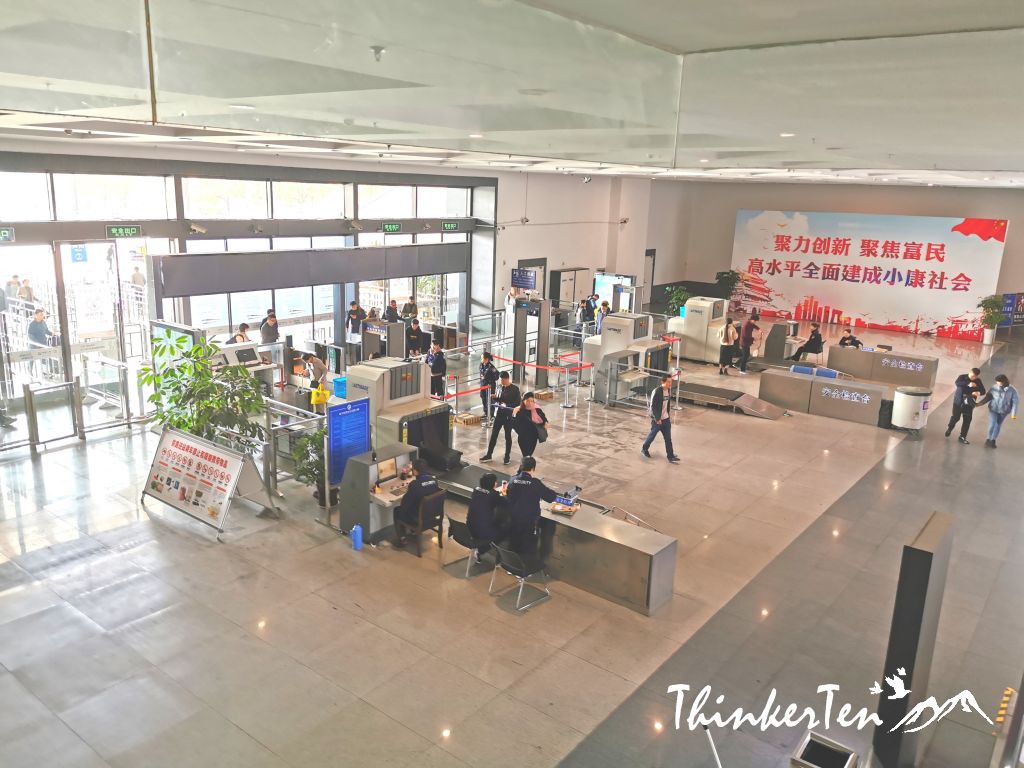 Refer to your ticket to check your boarding gate and wait at the correct waiting room. 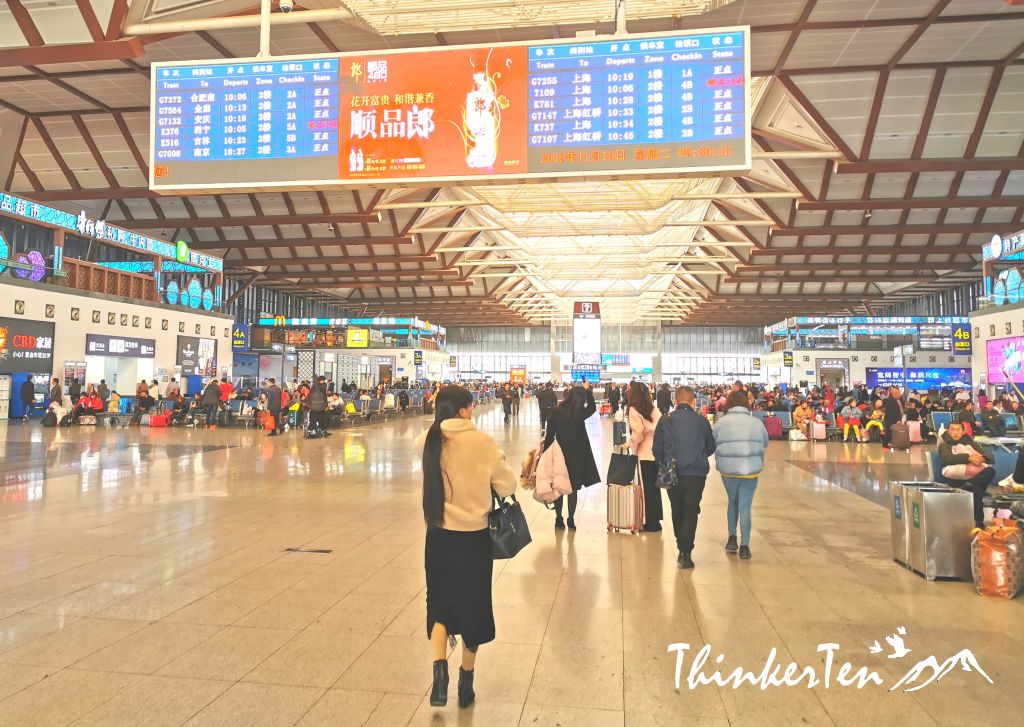 If you are on a business class ticket, you can use the special room “Business class lounge”, complimentary snacks and drinks are prepared and more privacy. 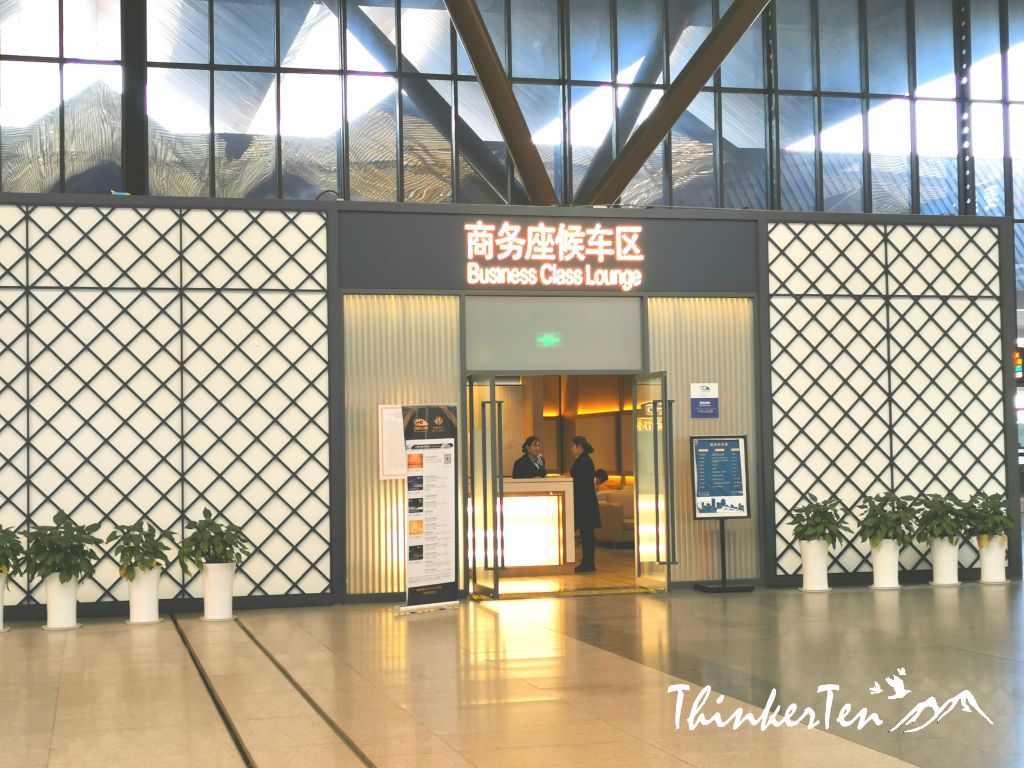 Check in to the train platform

About 15 mins before the departure, you should proceed to the check-in line to go down to the platform. You should listen to broadcasting or look at the LCD screen. Foreigners cannot use the automatic ticket checking for train boarding, you have to go through the manual checking queue. Again, get your passport ready.

Shopping in the train station

Similar to Japan, now China train station has a lot of things to see and buy, really interesting.  That’s why you are advised to come early to check it out.

Hairy crabs seem to be in the season during my visit, it is so expensive in Singapore but quite cheap over there. 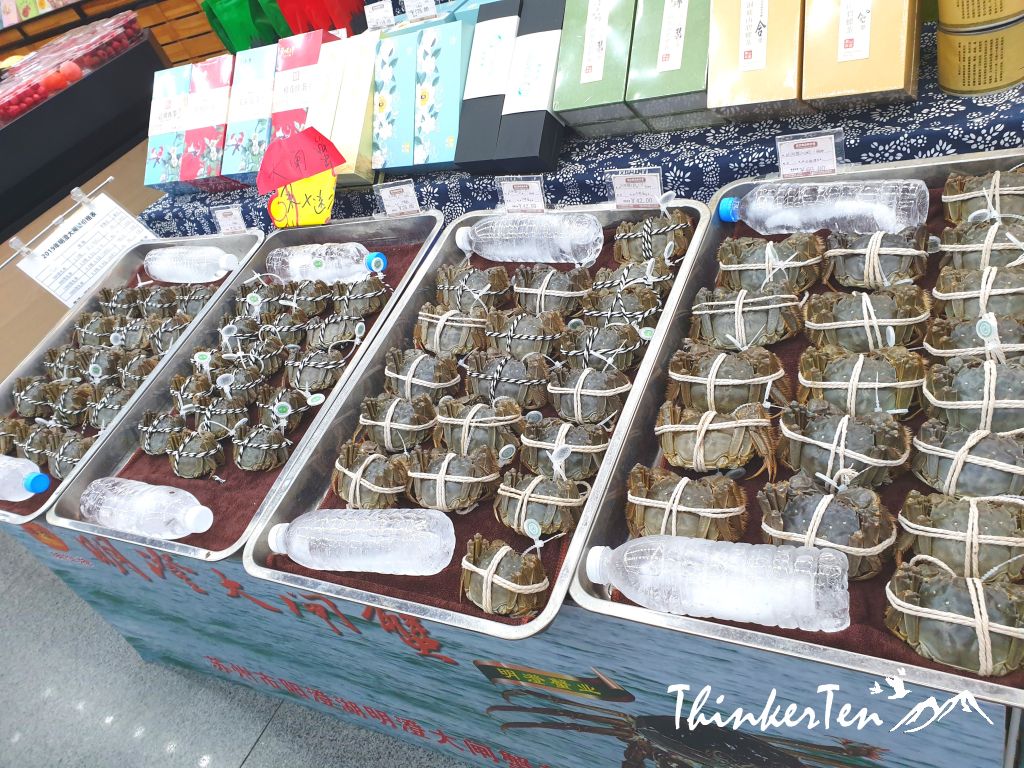 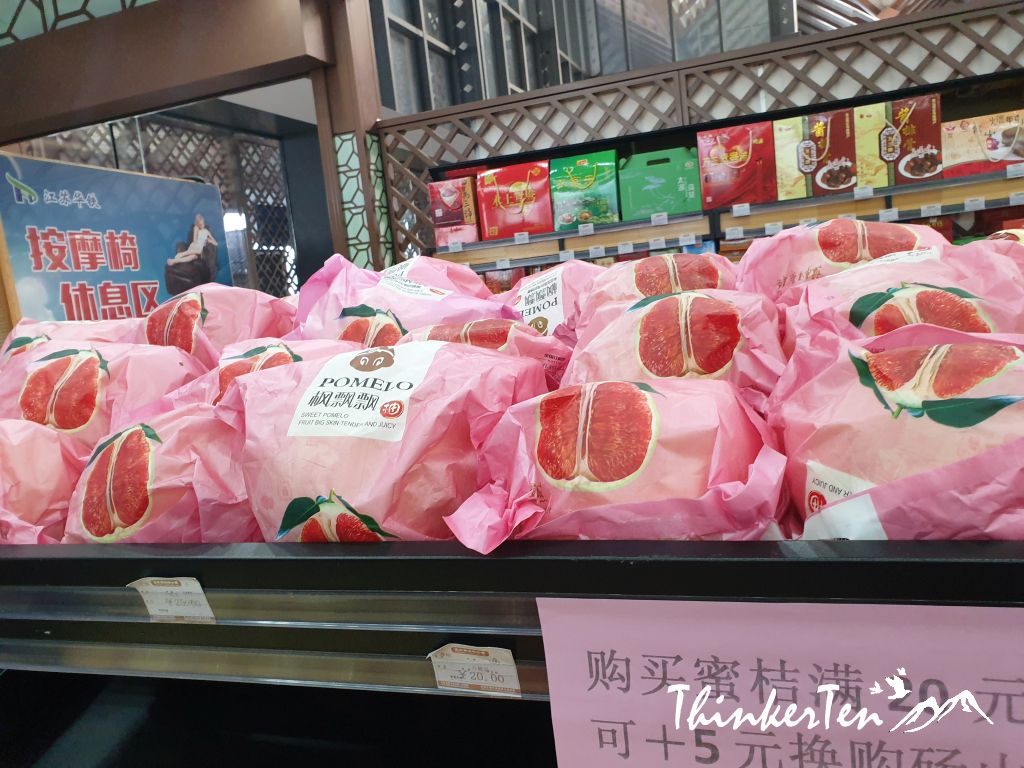 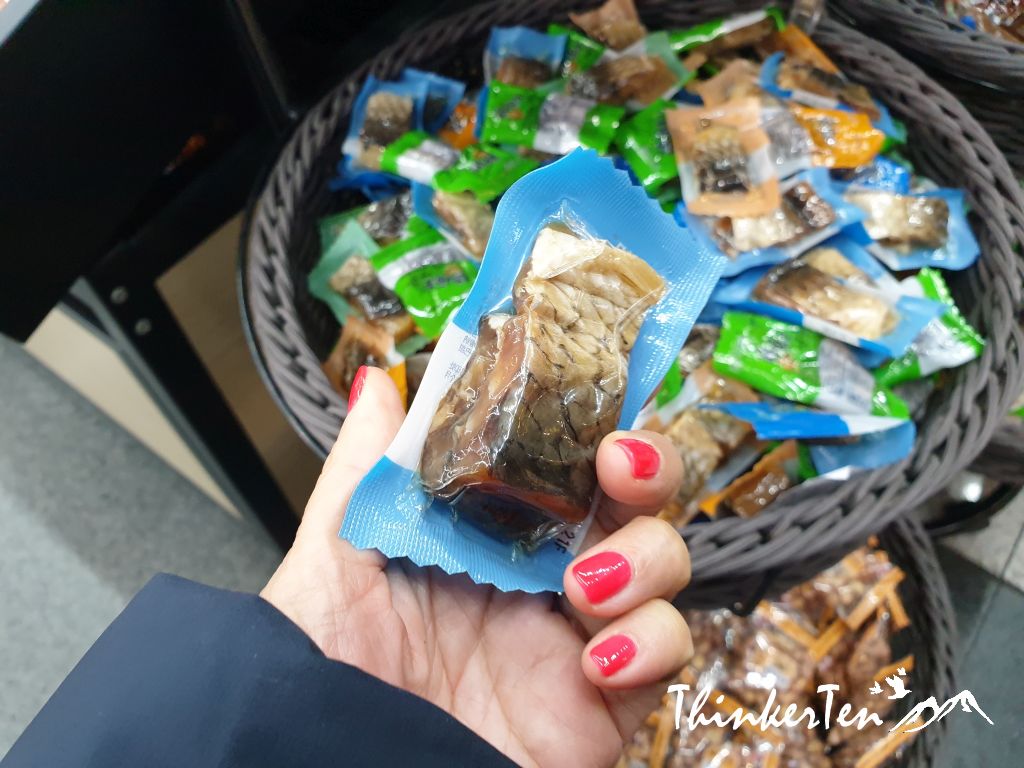 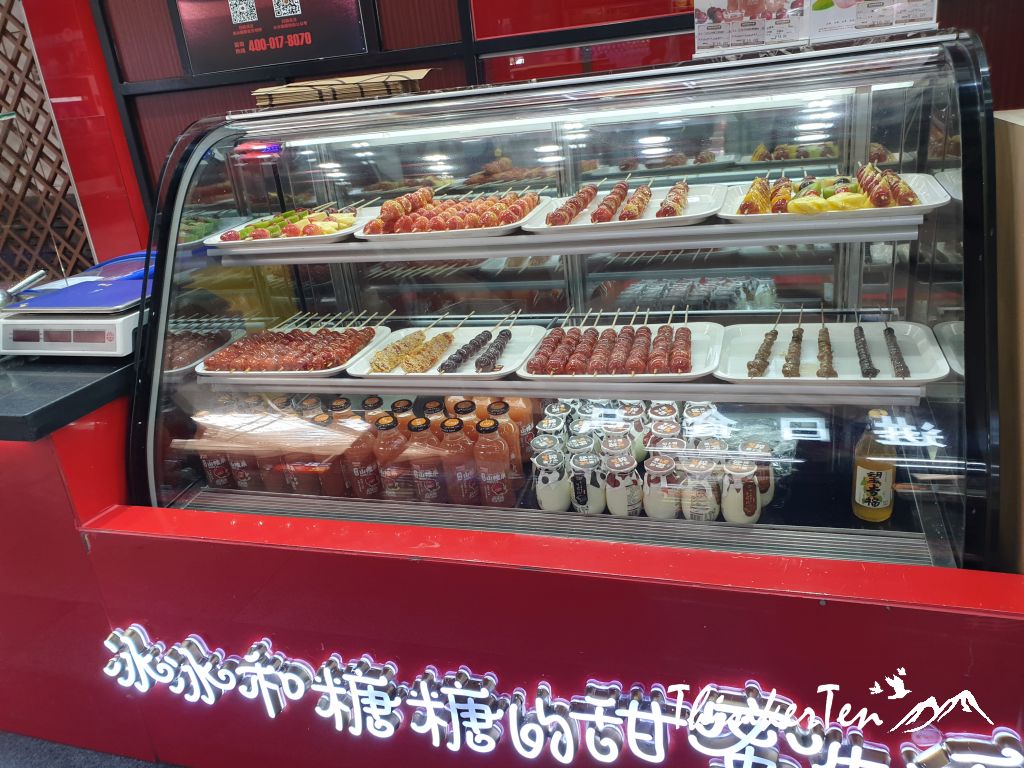 Many railway stations in China have fast-food chain restaurants such as KFC, McDonald and other local chain’s outlet. We bought some KFC and local food – duck drumsticks to eat on our train ride. 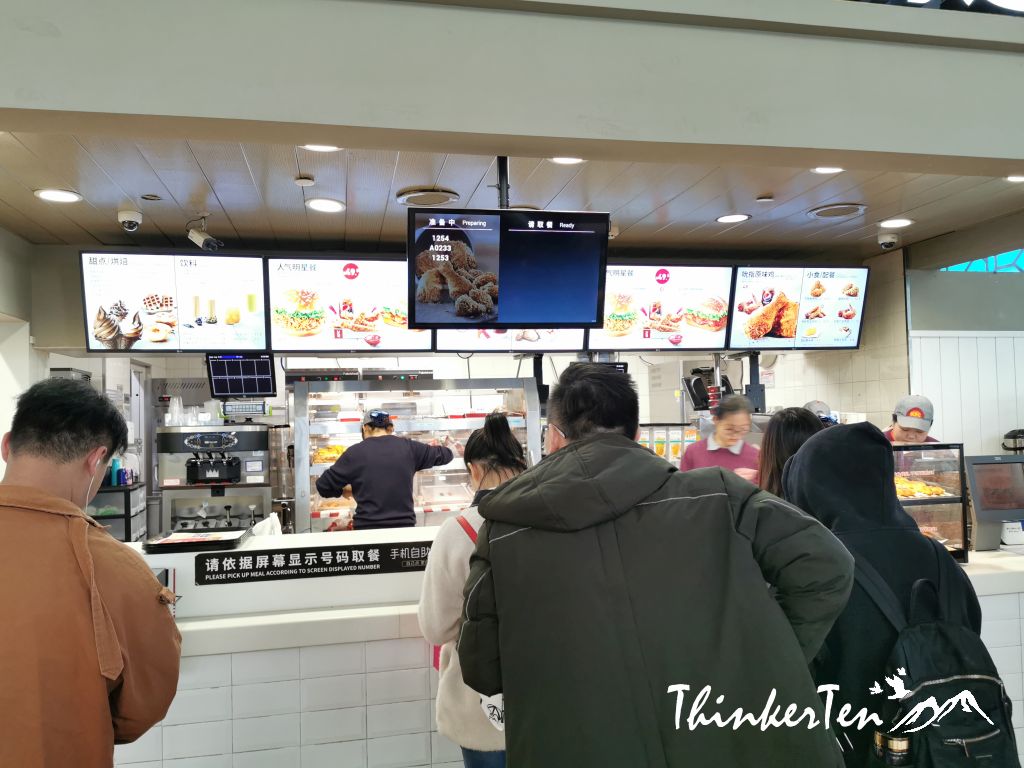 Zhou Hei Ya – specialized in ducks. I bought 2 duck drumsticks only cost about RMB20 (SGD 4.00), they also provide a pair of plastic gloves for easy eating on the train. 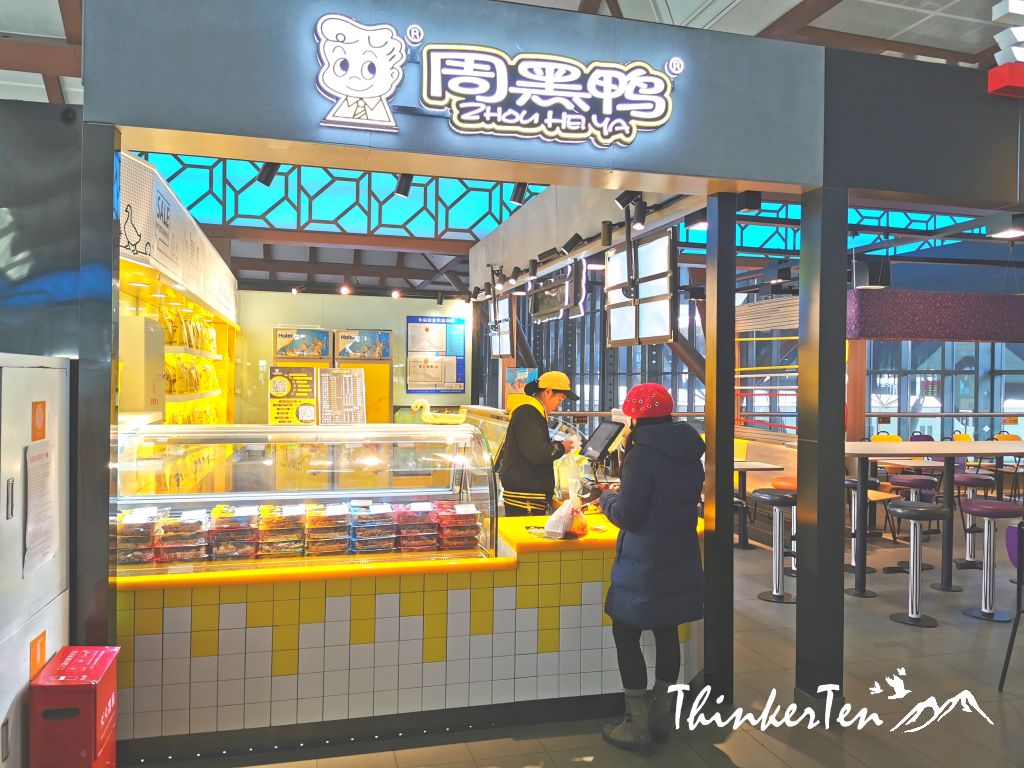 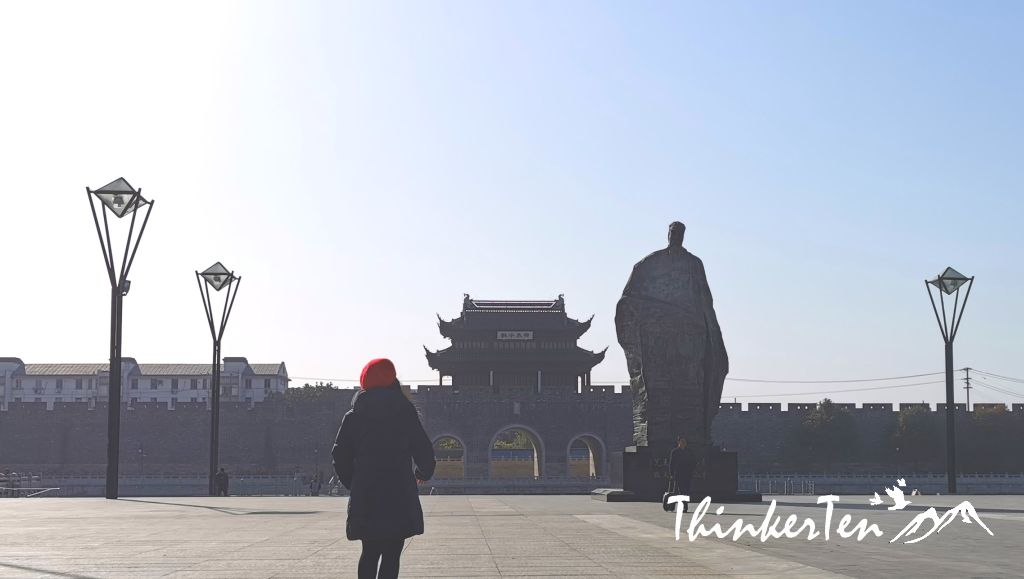 A lady in the traditional “hanfu” was seen in the train station. 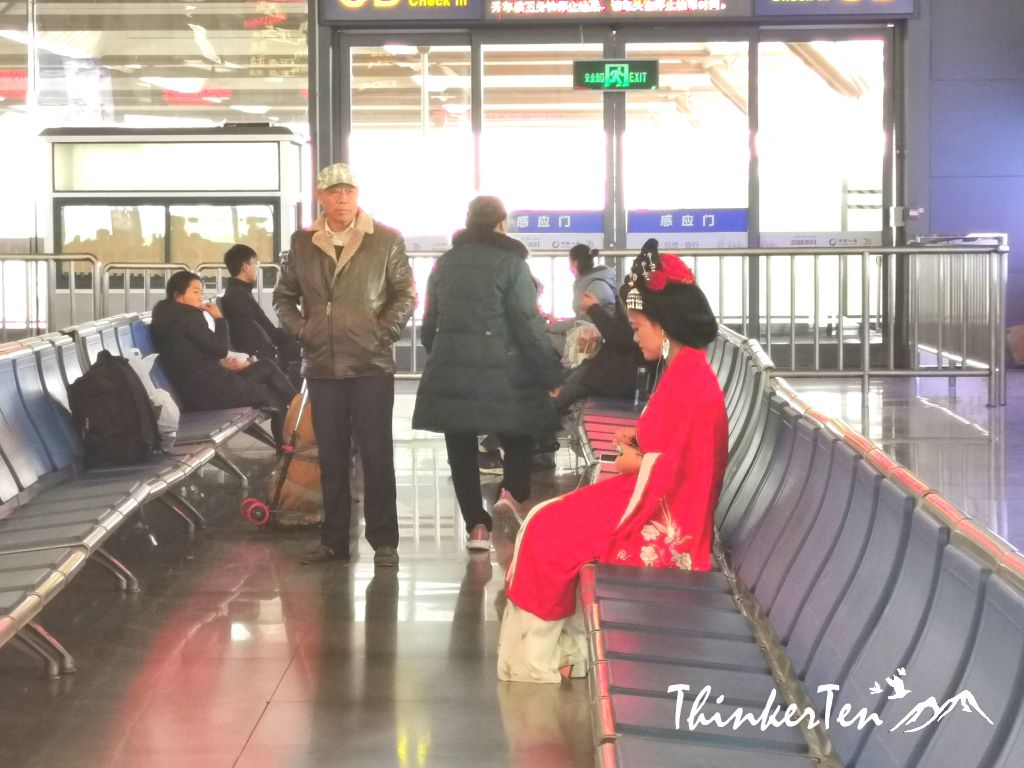 The scenery on the high-speed train, arriving Yiwu city. 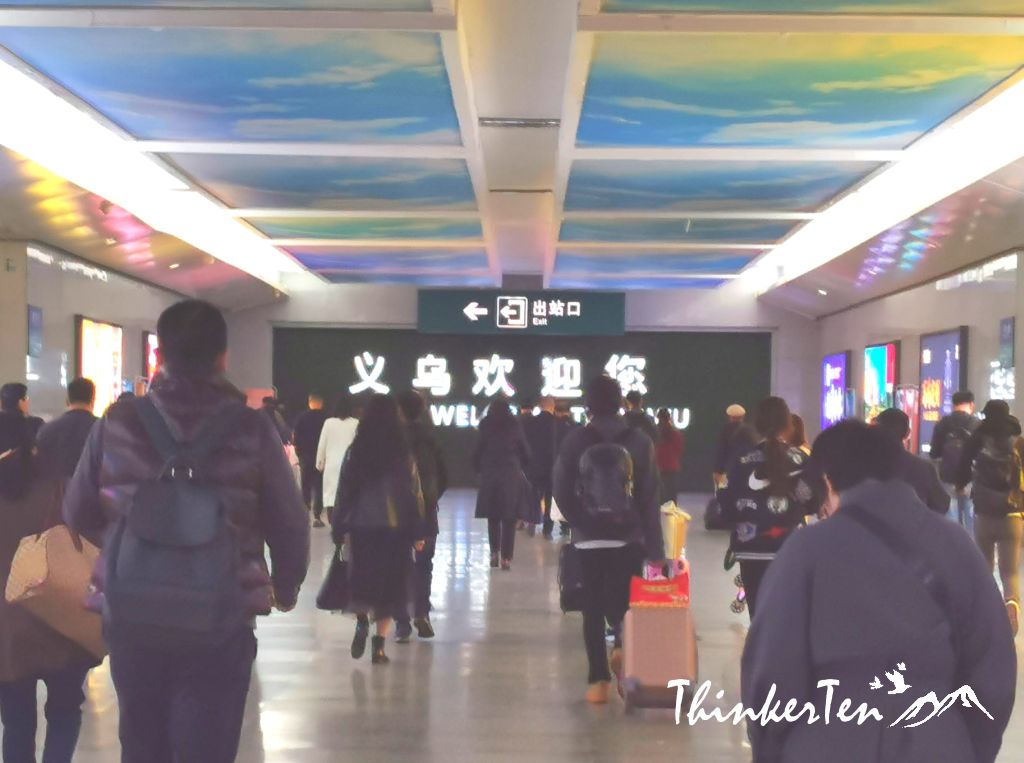 Yiwu is considered 3rd or 4th tier city in China, located in central Zhejiang province. It is a smaller city compared to Suzhou as it only has about 1.2 million people. From here we are about to catch a taxi to Hengdian as we are about to spend a few days exploring Hengdian World Studios.  Taxi to Hengdian takes about an hour and cost about SGD 30-40. 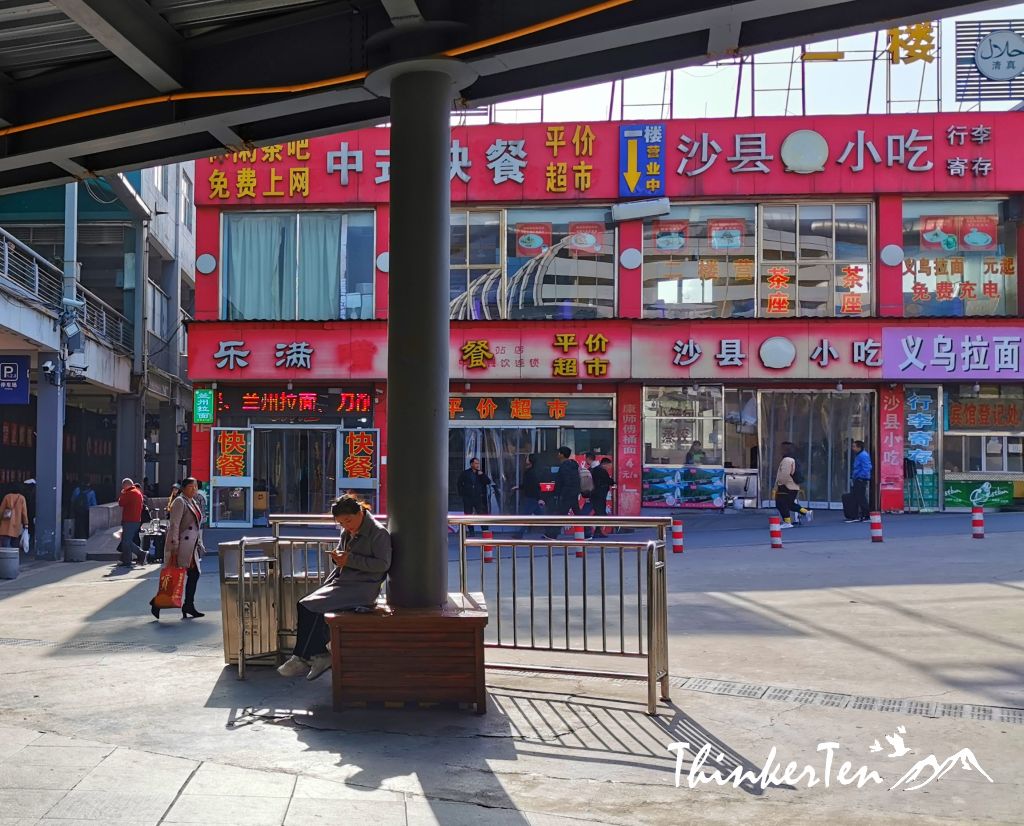 There are buses to Hengdian city too and it cost only a few RMB.  If you are a budget traveler, you can use the bus to reach Hengdian. 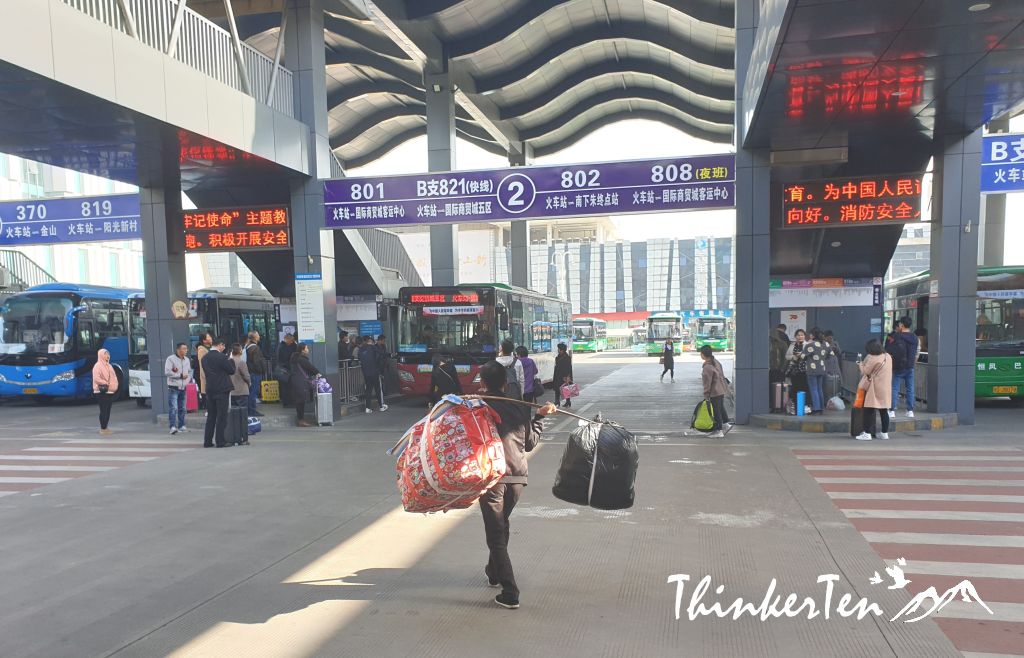 How was second class seats?  Well, to be frank, it is too narrow and always full of local tourists.  If you have a bigger size body, it is better not to travel with a second class seat, try the first-class seat instead, as it has 2×2 in a row.  I am quite petite in size but I still feel the seat is quite narrow.  The price between the second class and first class does not make a lot of difference.  My ride from Suzhou to Yiwu takes about more than 2 hours and cost RMB161.5 (SGD 32.5) 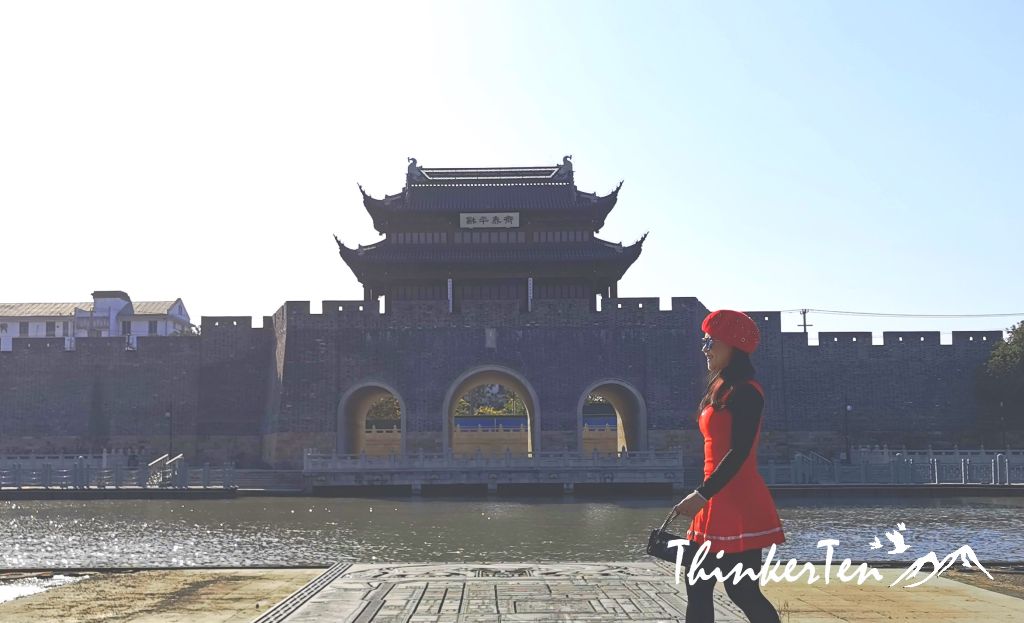 Traveling by train is more relaxing – you get to see countryside views. I would agree with you to take the first class seats, especially if the difference in fare cost is not that much.

The high speed train sound amazing, also the train station facilities. It’s not so good the seats are narrow though, I suppose I would prefer to travel in first class.