There are several bridges in West Lake Hangzhou but Broken Bridge is one of the famous of all. It is located in the eastern end of the Bai Causeway in Hangzhou West Lake. The bridge is faced with the West Lake, and opposite to the Jade Mountain and Baoshu Tower. It is said it has one of the stunning views because there are a combination of mountain, tower, lake, pavilion, bridge, and willow on the lake bank which form an attractive picturesque view. Just like in the painting. 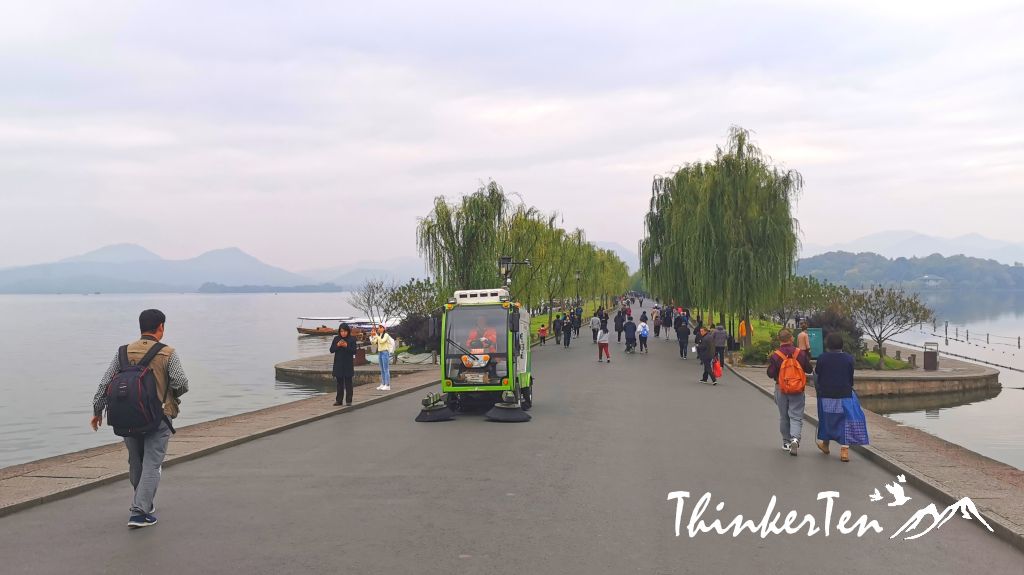 There are several versions of why the name was called “Broken Bridge”. One version said that the Bai Causeway was pure white like a chain, with the sunshine shining upon the bridge, the area exposed to the sun appeared snowmelt like the long pure white chain was broken here, hence it got its name “Broken Bridge”. 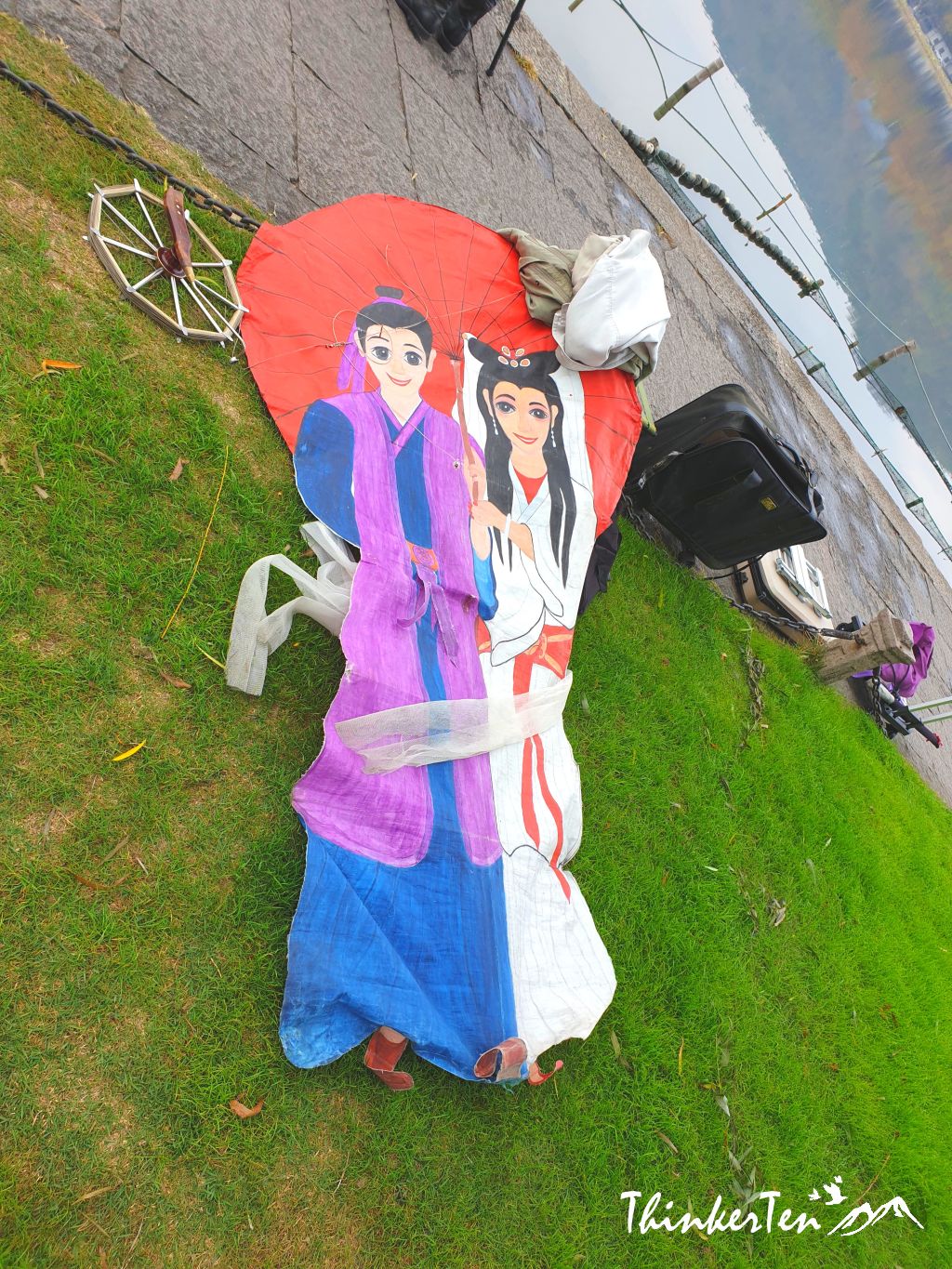 Another famous legend about Broken Bridge is the love story between Xu Xian and the lady White Snake. Maybe because of this love story, it has become the most famous bridge in West Lake. One day the white snake was caught b an old man but luckily a young boy let go of the white snake. After 1,700 years later, the White Snake finally managed to obtain the human body and became a pretty young lady in white. She still thinks of the young boy who saved her so she came to Hangzhou West Lake to look for the boy and found him in Broken Bridge of the West Lake.

During my visit in early winter, we saw the kite that was made with the picture of the White snakes and Xu Xian. (Above)

It is a tragic love story in The Chinese folk story with a sad ending. The name of the story is called “Biography of White Snake”. The White Snake is called Bai Niangzi met Xu Xian here in the Broken Bridge. They travel by the same boat and use the umbrella to make their “love promise” for each other. Ancient Chinese couples normally would give or exchange a small item for the person they loved. It can be small hair clips, umbrella, handkerchief, wallet, letter, and many more. 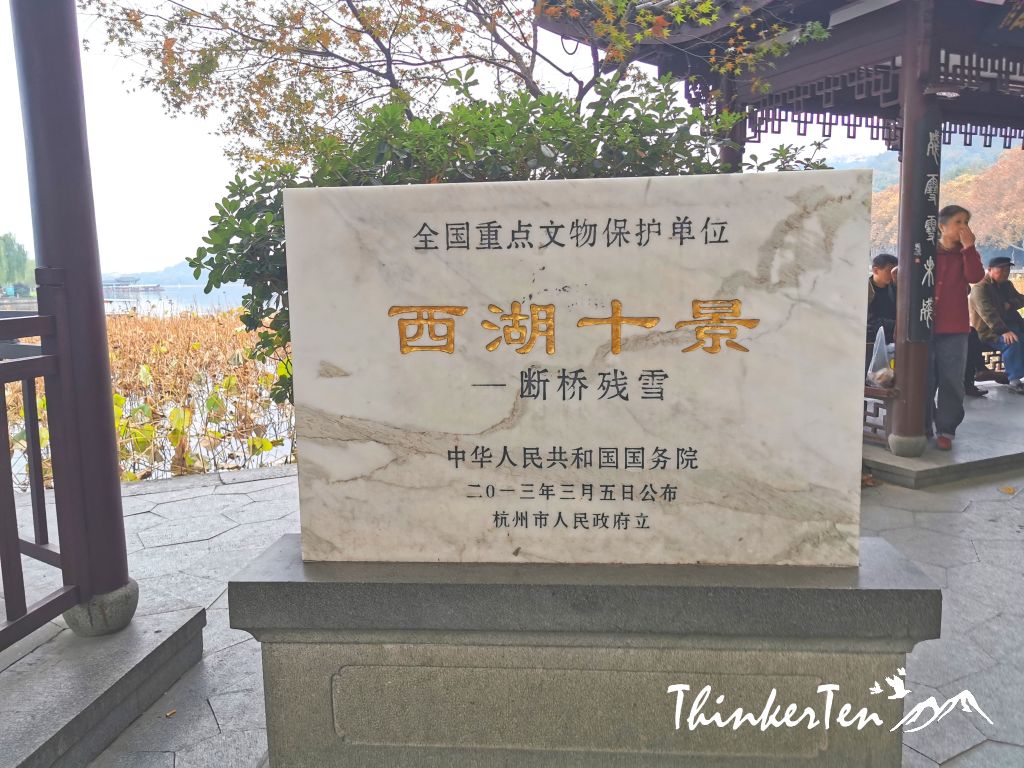 The best way to look at Broken Bridge is maybe by traveling on a boat ride in West Lake, that way you can see the architecture of the bridge from the side. If you are walking on the bridge you won’t be able to view the shape but you can still feel the ambiance and especially the willow trees on both sides of the banks.

From a distance, it looks like a broken bridge but when you are near the bridge, it is just a normal bridge. 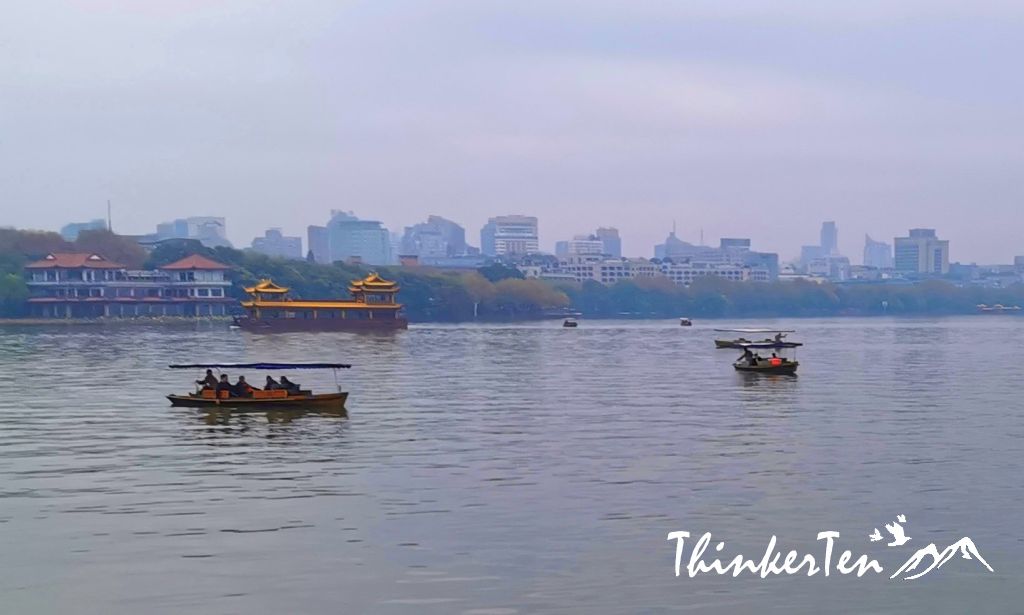 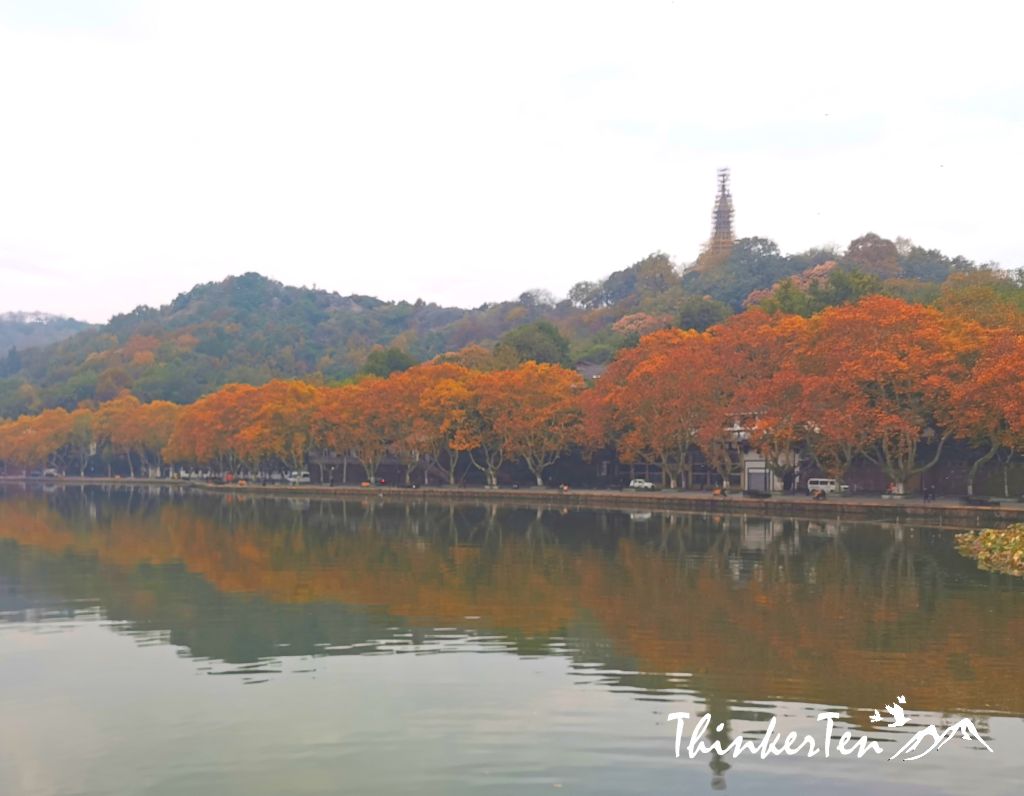 The good thing about this scenic site is it is free of charge. Usually, there are fees to get into many of the attraction sites in China. Luckily this one here is without entrance fees. This is also a smart way to attract more tourists and spike up the economy in Hangzhou. 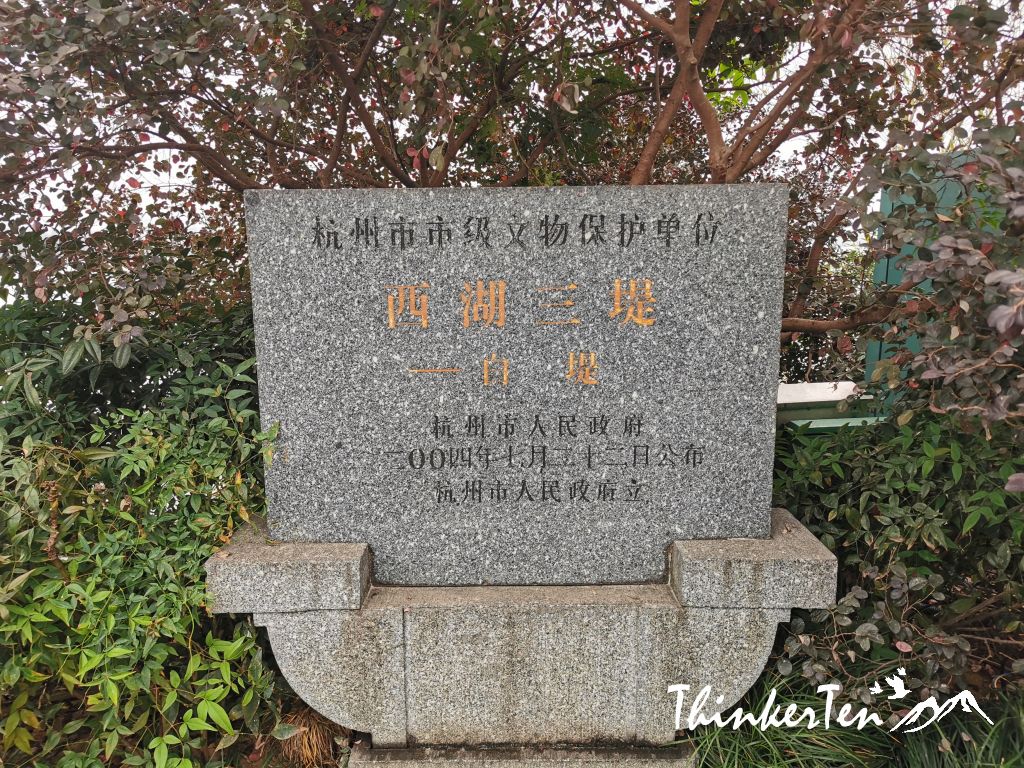 Bai Causeway 白堤 is about 1km long, they name it Bai Causeway to give a tribute to a famous poet Baijuyi 白居易 who is also Tang Dynasty government official.

In summer you see lots of lotus lily pads on both sides of the banks. The crowds in summer and springs can be daunting. It is also linked to the Broken Bridge. Broken Bridge is situated at the eastern end of the Bai Causeway. 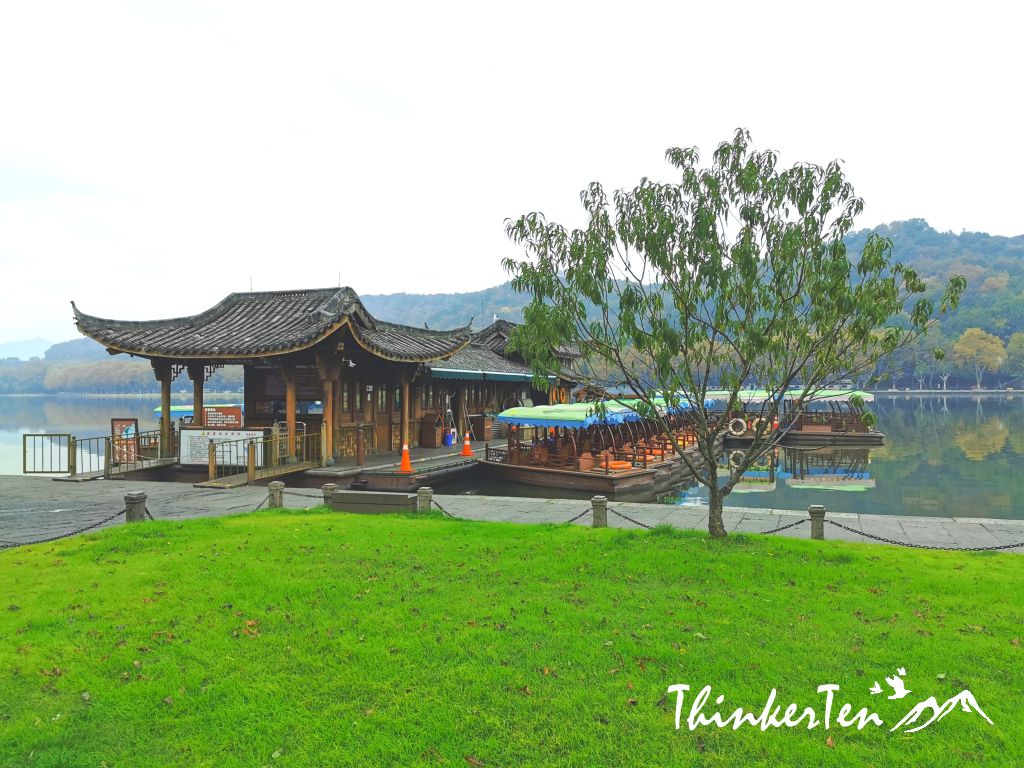 You can also consider doing a boat ride in West Lake.  Use mobile payments such as Alipay or Weixin to pay for the boat ride fees.  Cash is also acceptable. 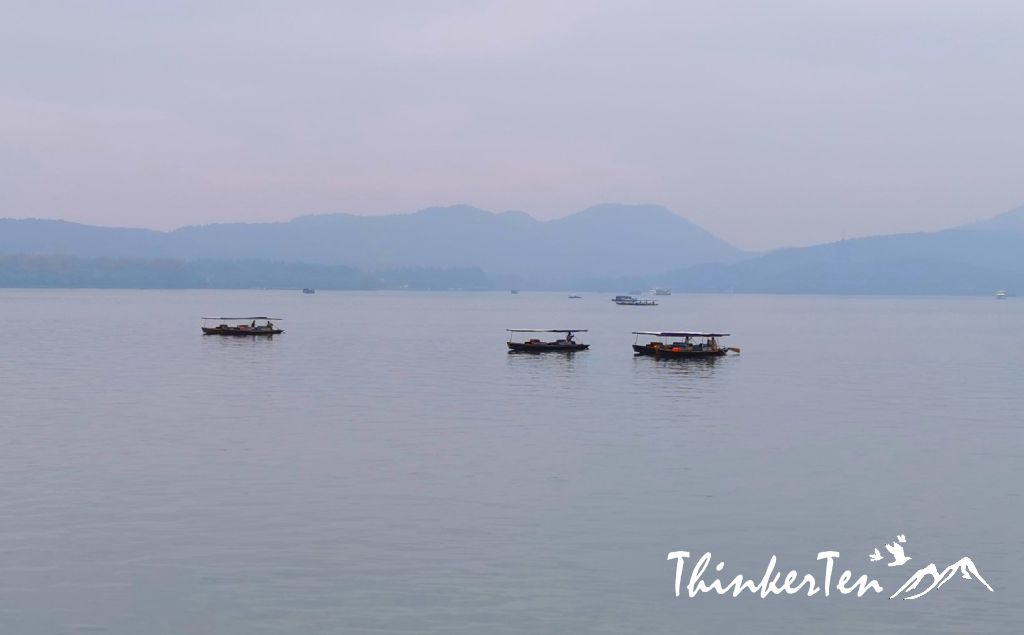 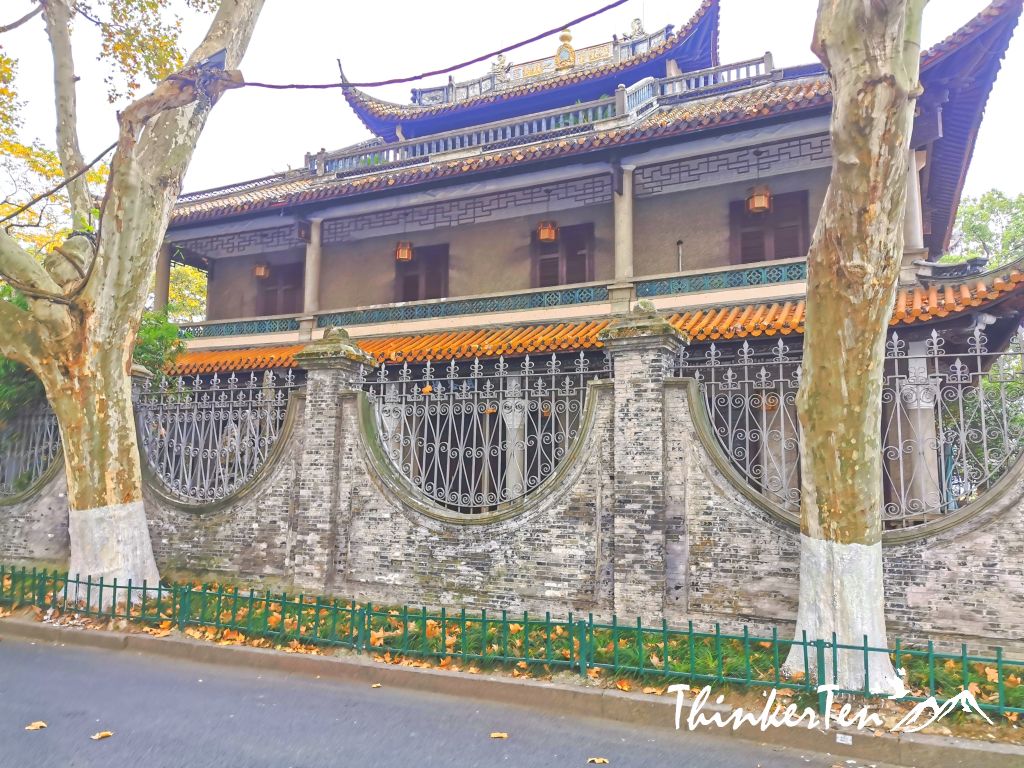 Pinghu Qiuyue is located at the west end of Bai Causeway and is a long and narrow garden along the lake. It is the best place to enjoy the moon in West Lake.  The view is actually very broad, so it has become an ideal moon-watching location.

It has a wonderful landscape, that’s why it is named the top ten scenic spots of the West Lake. You will find a Pavilion, water platform, four-sided hall, octagonal pavilion, Hutian Yibi Tower, and other buildings. 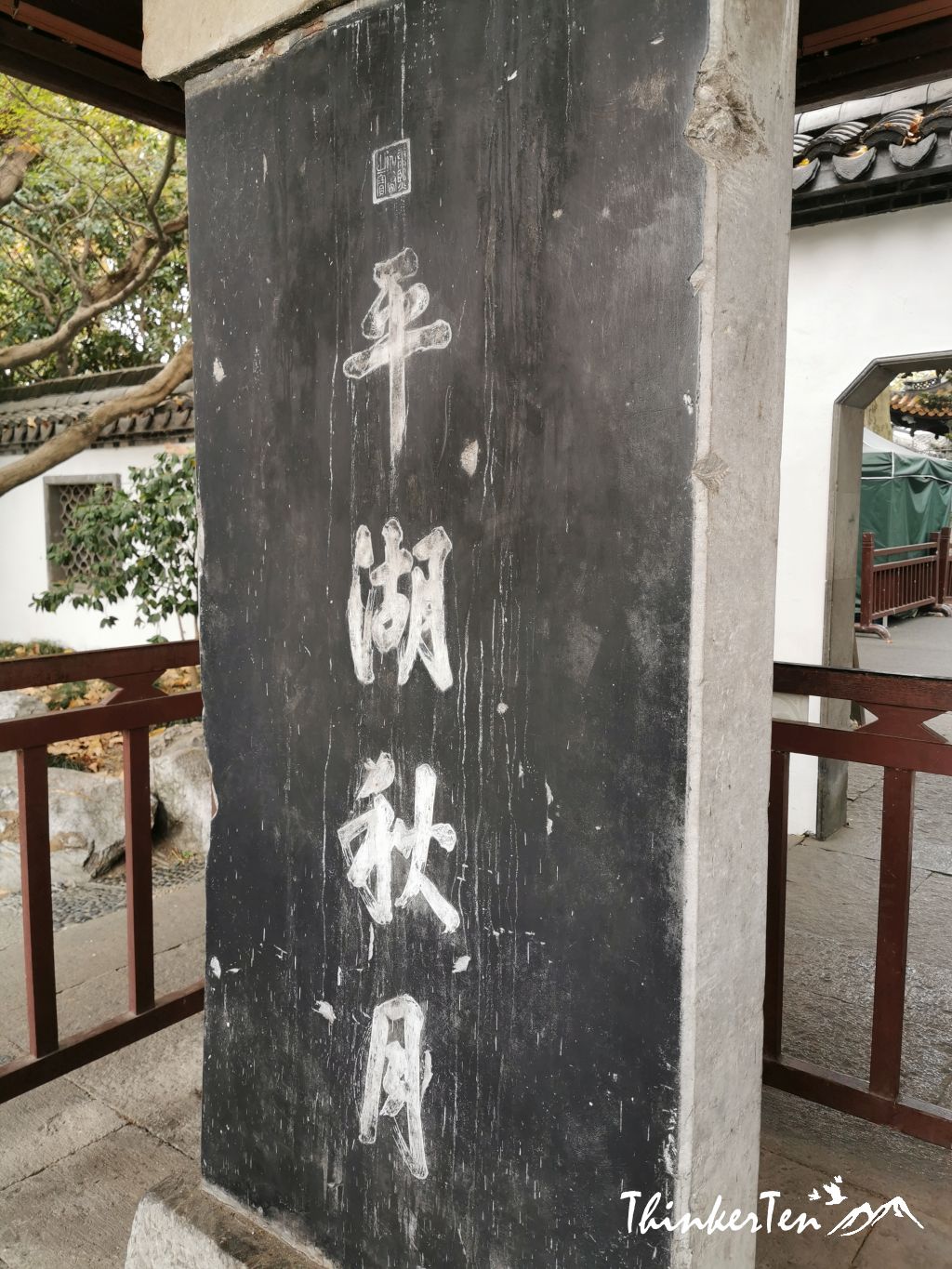 In the thirty-eighth year of Kangxi Emperor, the original Dragon King Hall was changed to Yushulou 御书楼, and in front of the building was the plaque “Pinghu Qiuyue 平湖秋月”. 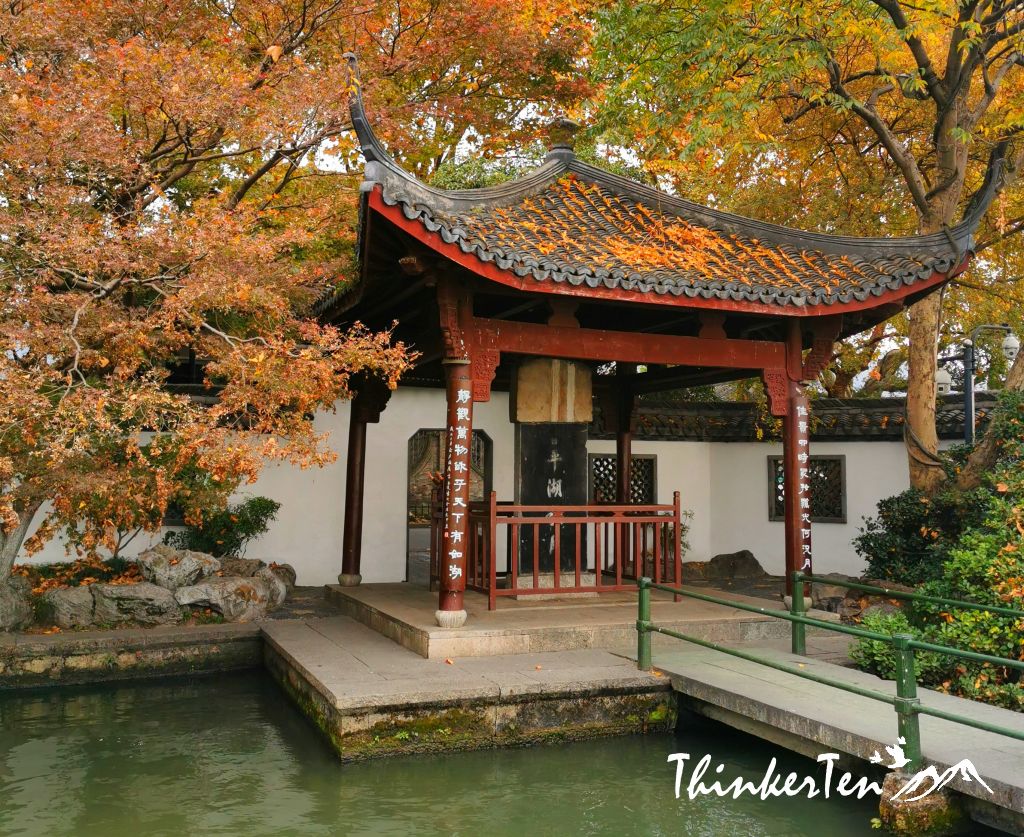 From West Lake, you will see Leifeng Pagoda from far. It is a five-story tall tower with eight sides, located on Sunset Hill, South of West Lake in Hangzhou. It was built in the year of AD 975 but was collapsed in 1924 and was rebuilt in 2002. Again the legend of Leifeng Pagoda is associated with a touching love story between the lady white snake, Bai Niang Zi and the young man. After both the white snake and Xu Xian fell in love and got married, the Evil Monk Fa Hai imprisoned Xu Xian as to separate the couple, evil Monk thinks snake should not get along with human. The white snake used her power to save her husband but her efforts were in vain. Unfortunately, she was imprisoned under Leifeng Pagoda for years. However, the white snake’s best friend, Green snake also known as Xiao Qing tried to save her from freeing her under Leifeng Pagoda and finally won the evil Monk, she tore down the tower and save the white snake. From then on, the white snake and Xuxian live happily ever after.

West Lake in Hangzhou is huge and if you don’t know where to start, follow this post.  Bai Causeway, Broken Bridge, and Pinghu Qiuyue and the must-see.  You can also add in a boat ride in West Lake, that way you also get to see Broken Bridge from the water.  Yes, don’t forget to look at Leifeng Pagoda from far.

You should also read up Legend of  White Snake love story before you arrive in West Lake.  There are many sites that are related to the legend of the White snake. 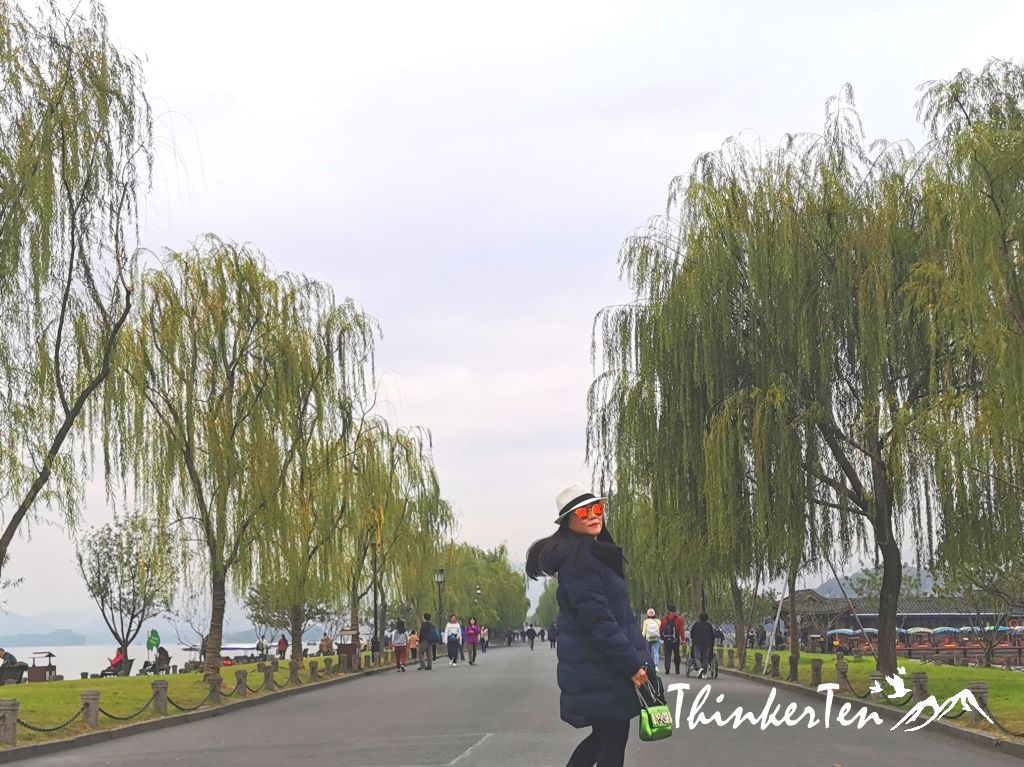 This looks like a wonderful place to visit and the picture of the Broken Bridge was really reply with all of the greenery growing on it. Thank you so much for sharing and will add this to my growing list of beautiful places to see!

This looks like a great place to go and explore. You have shared some gorgeous snaps too especially the ones of the Broken Bridge!

What a beautiful place. Makes me want to go and travel as soon as we are able to.

Gosh, reading this post, and learning about not only the physical beauty of these places, but also the amazing stories and culture of them makes me wanna see and experience it all my self. I need to investigate the story of the White Snake, there is a similar one of a mermaid in Trinidad and I love these folklore stories so much.

Wow what a beautiful lake! Looks like a lovely spot to visit. Thanks for sharing!

I never thought about this place. I’m going to have to add it to my bucket list!

Oh wow I am loving all your piccys for sure. This has made me want to go travelling now x