Now is the best time to explore more in Singapore with SingapoRediscovers Vouchers. Have you thought of how to use the S$100 voucher? Well, we use it for the Singapore River Cruise.

Frankly speaking, this is the first time for us to explore the Singapore River Cruise with the traditional Bumboat. The bumboat is known as tongkang in Malay and was made of wooden, used largely from the 19th to 20th century, transporting goods along Rochor, Kallang, and Singapore rivers. And now, these bumboats are used for bringing tourists as well as locals who want to enjoy the best of Singapore waterfront. 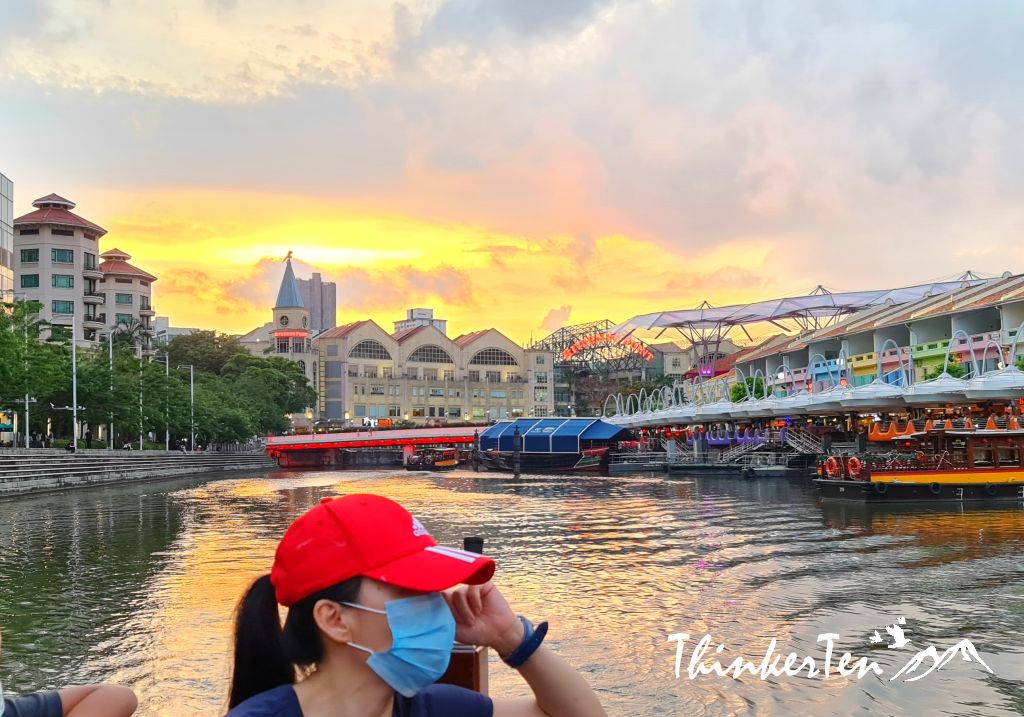 Now, what is the best timing to book for Singapore River Cruise?

The best timing to book for the Singapore River cruise would be the golden hour, meaning an hour before sunset. This is the best time to check out the view. Why? You will get the chance to see the sky turn its colors from daylight, to redder and then slowly darker. This is also called the magic hour for photography and the natural light works wonderfully well with your photos.  You can also catch the beautiful sunset over the river followed by all the bright neon lights of the Singapore city skyline. 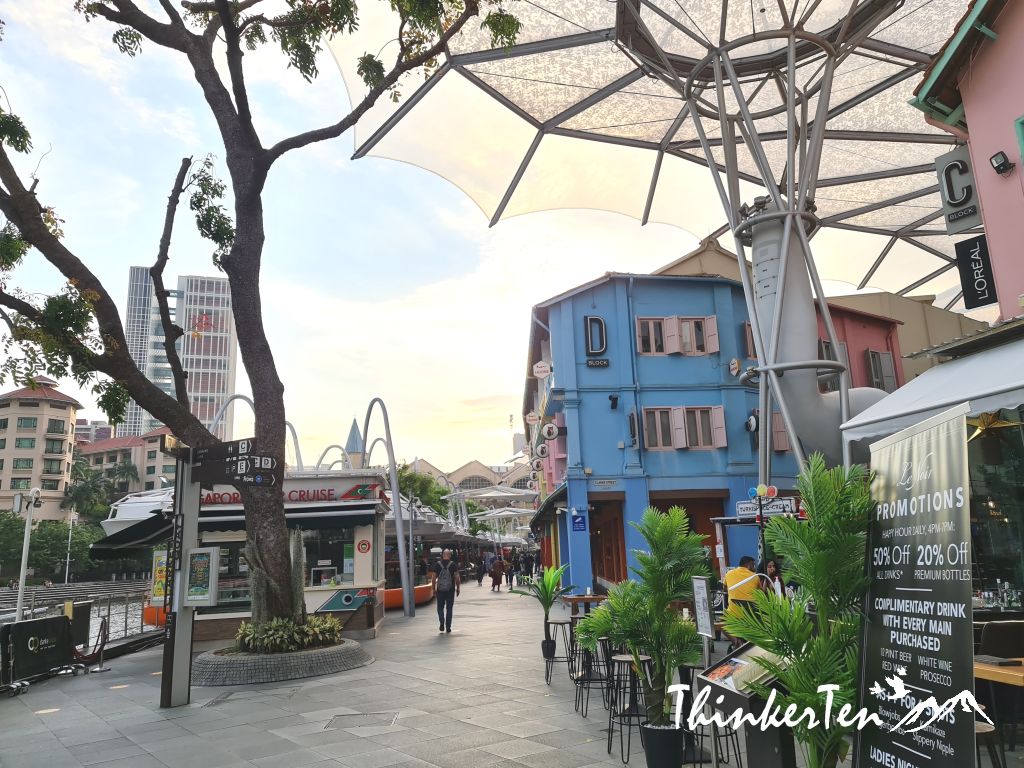 We booked our ticket online and secure a good timing in the evening, around 6.30 pm. Then we head to Clarke Quay Jetty River Cruise ticketing counter half an hour before the departure. The Jetty sits next to the GX5 Extreme Swing. So go look for that landmark. We parked our car at the Liang Court shopping mall and walked over.  It only took about 10 mins walk.

There are actually many other jetties that you can choose to embark on your journey, such as Boat Quay Jetty, Read Bridge Jetty, Esplanade Jetty, Bayfront South Jetty, Merlion Park Jetty, Fullerton jetty and Promenade Jetty.  In total, there are 8 of them. 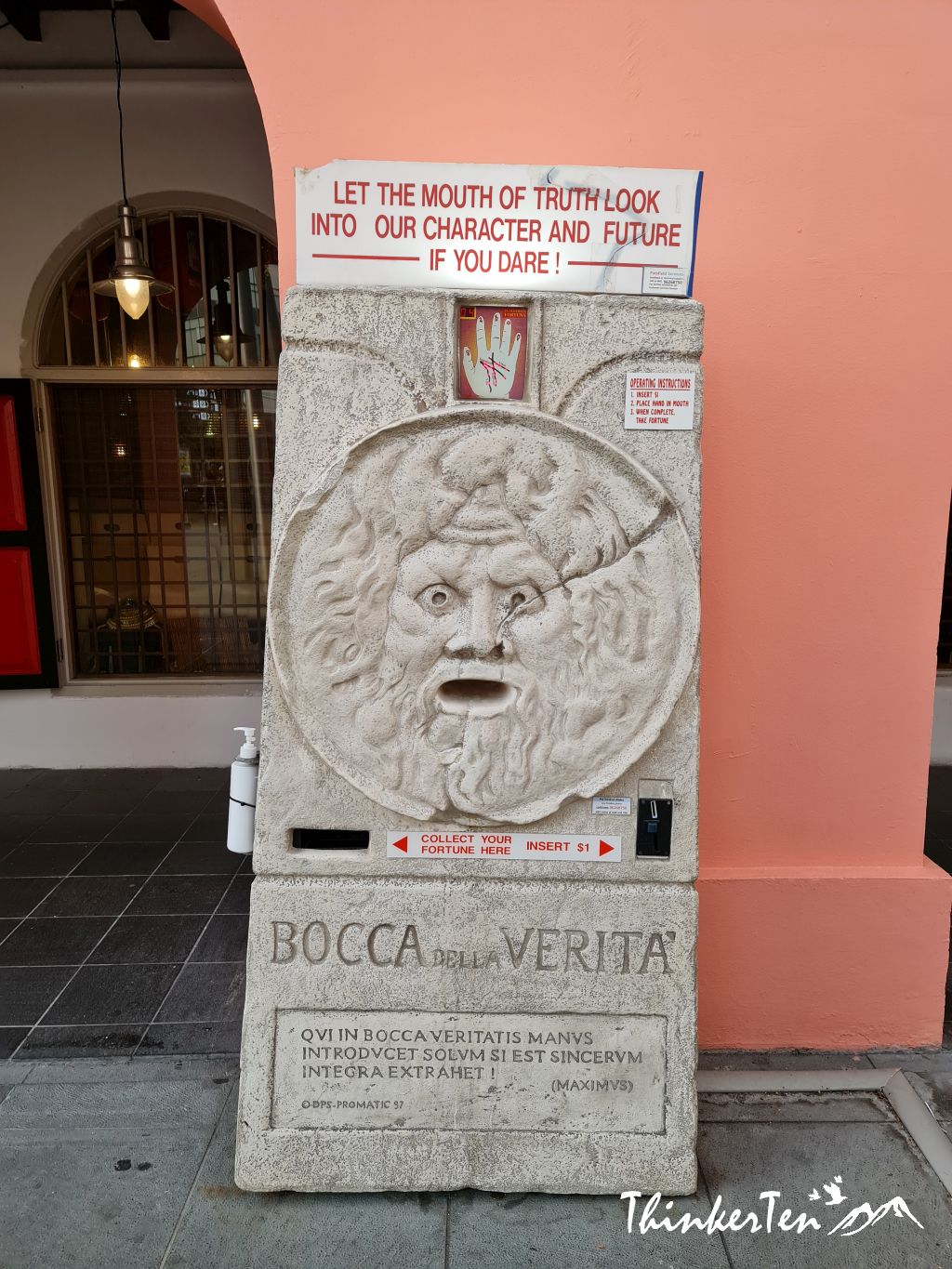 We went for a walk in Clarke Quay, this is a place best known for bars and restaurants by the river. But due to Covid 19 situation, these bars and restaurants are clearly seen facing some restrictions. With reopening in phases, you can see that activities started to resume. That’s a great sign. 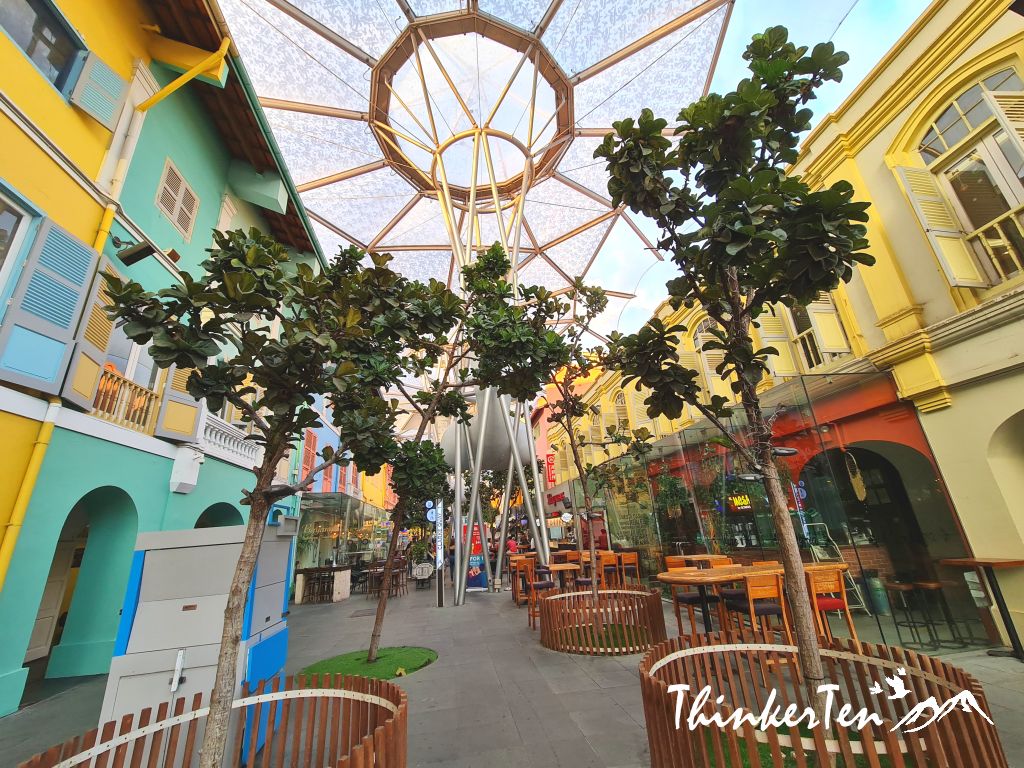 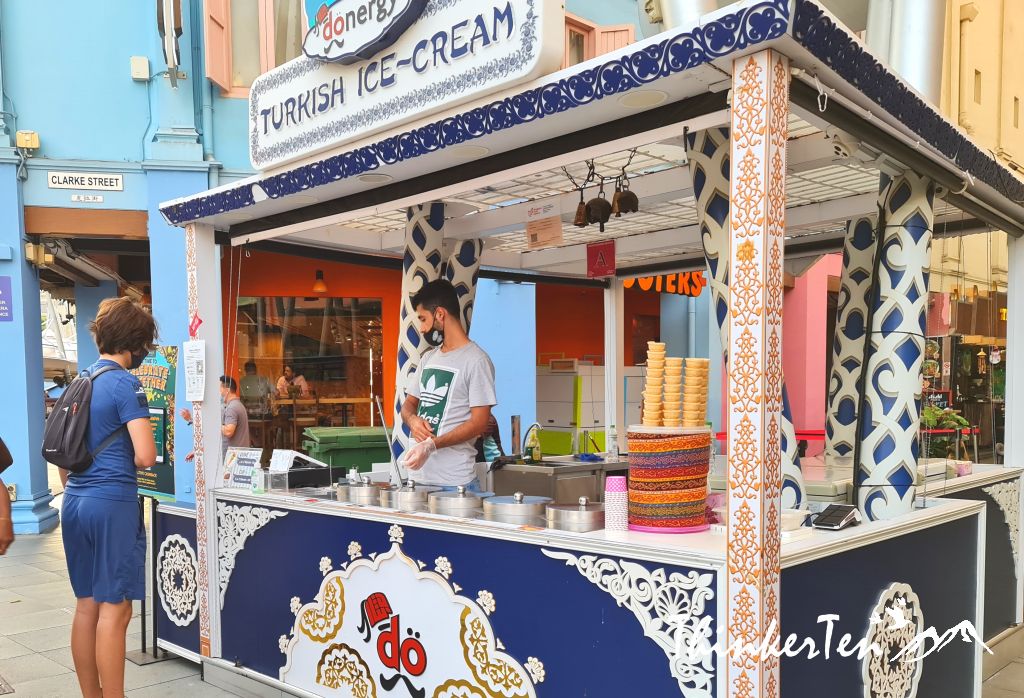 To be frank, the atmosphere is always buzzing in Clark Quay, the restaurants are offering a wide range of different cuisines, Chinese, Japanese, Thai, or Western. Shopping opportunities are also plenty. You can feel the cool vibes here. Pretty amazing we happened to see a little boy ordered Turkish ice cream. It is really fun to see how the vendors tease the little customer. He first pretends to serve him the ice cream cone on a stick,  then intentionally taking away the dondurma with the stick by rotating it around, only after few attempts, the vendor finally giving the ice cream to the little boy. 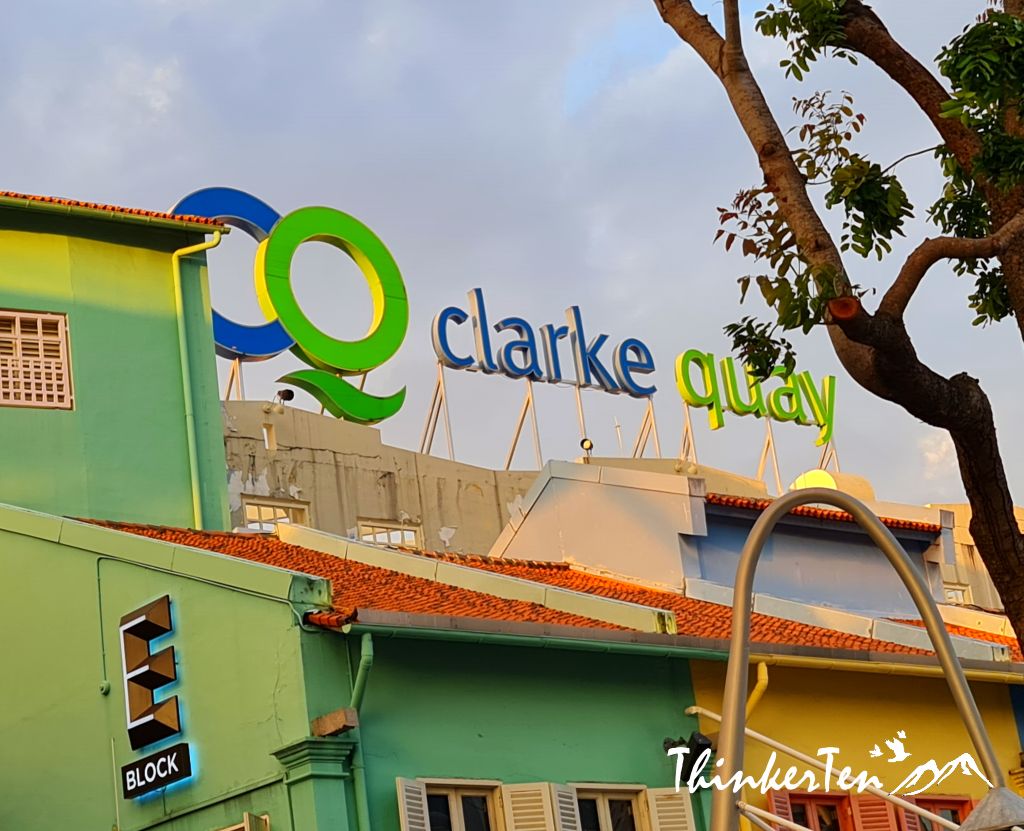 Clarke Quay was named after Sir Andrew Clark, Singapore’s second Governor and Governor of the Straits Settlements from 1873 to 1875, who played an important role in positioning Singapore as the main port.

At present, there are 5 blocks of restored warehouses house various restaurants and nightclubs. 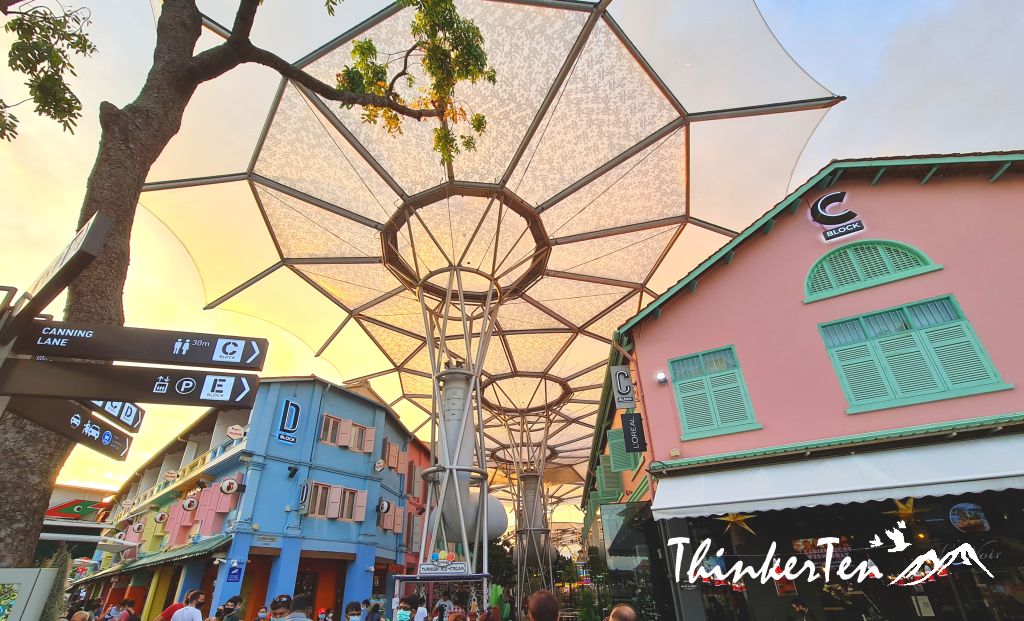 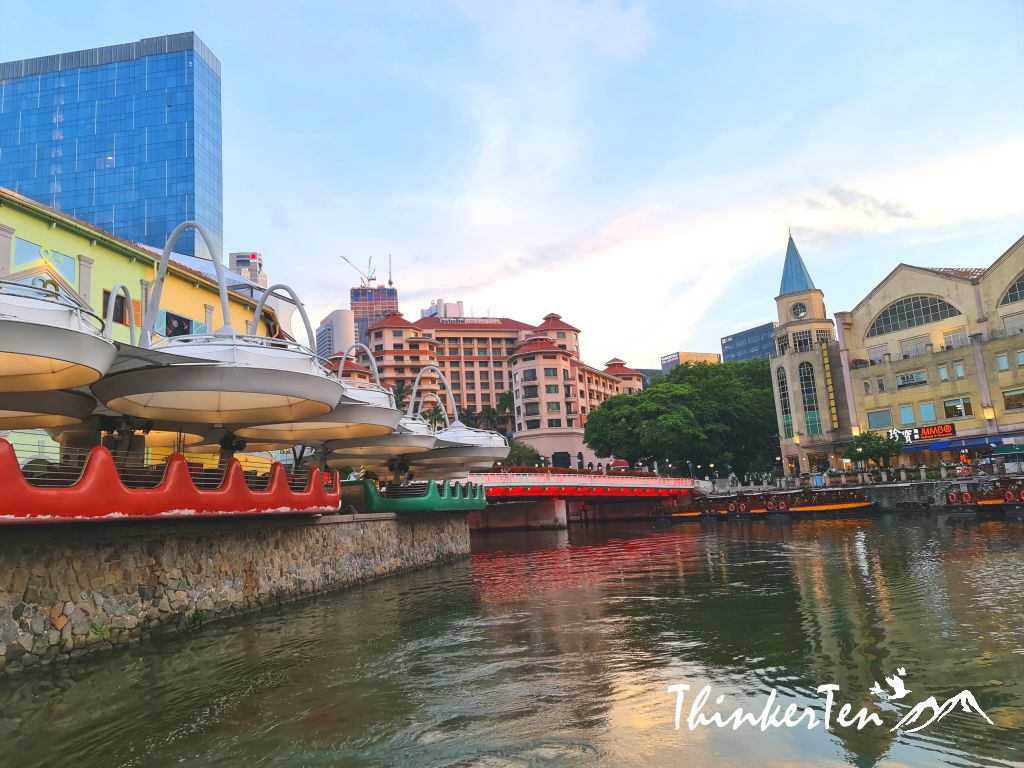 Now, it is almost time for the Singapore River. We went to the Jetty 15 mins before and queue for our turn to embark on the tongkang bumboat. 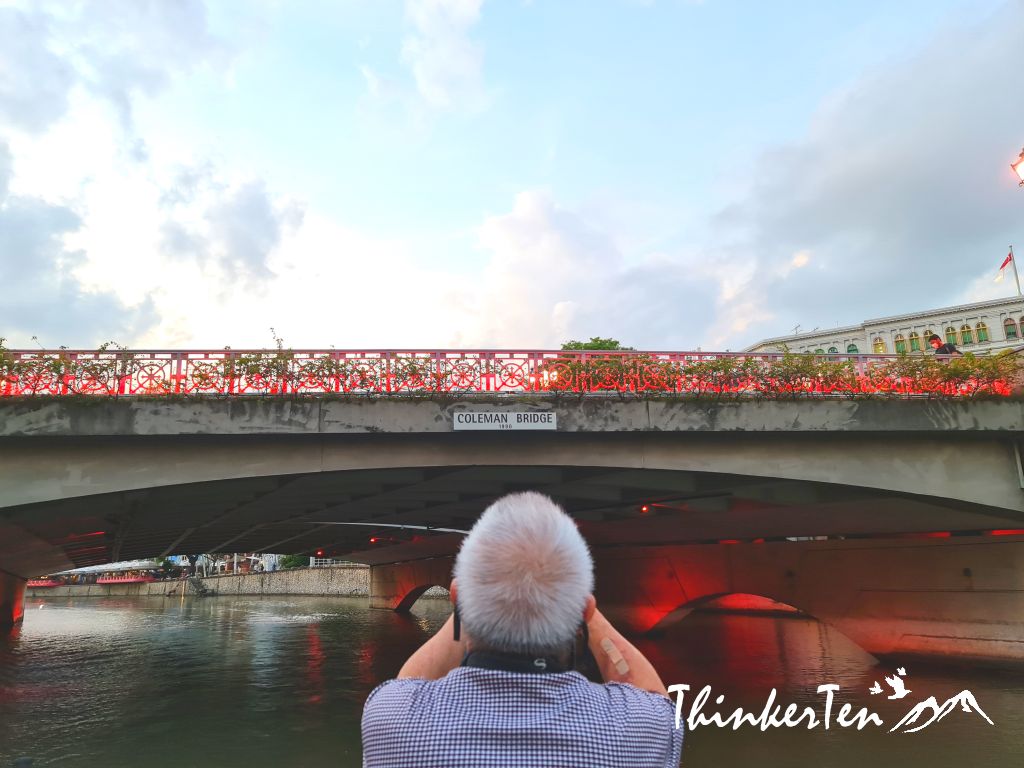 The first thing to get our attention when the boat started to sail is the Coleman Bridge because of the red light up. The bridge links Hill Street and New Bridge Road. It is a historical bridge built in 1840 but there have been a number of replacements over the years. You get the best view of this bridge sailing past underneath. 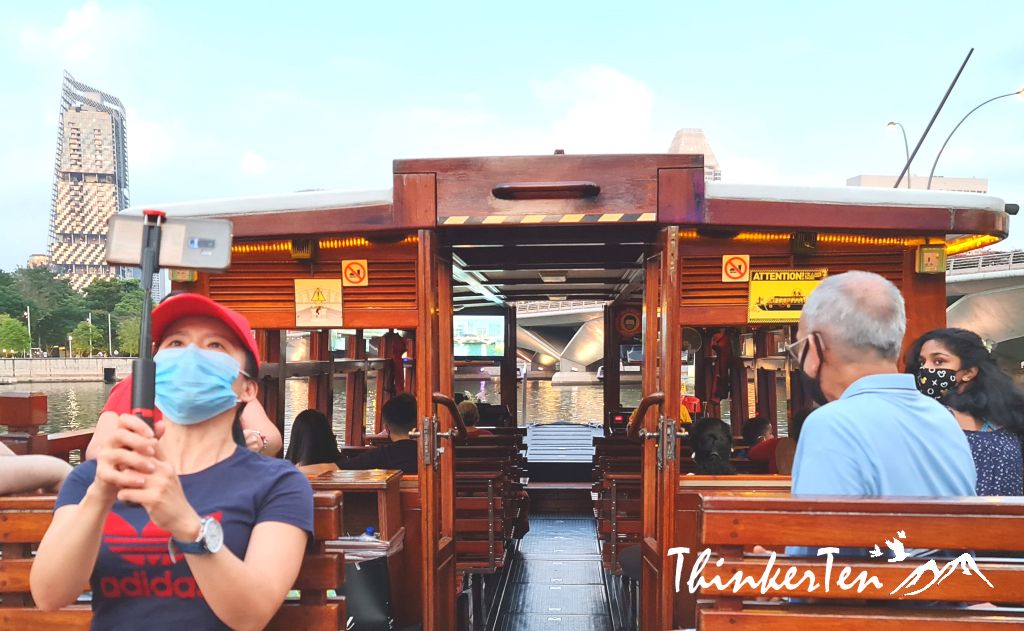 Due to Covid 19, we have to space out our seating arrangement. Everyone wants to sit outside for the best view. Luckily we were on the line quite early so we managed to secure the outdoor seating. Ok, its time to film the whole journey of the Singapore River.

It was temporarily closed due to Covid 19 until further notice. 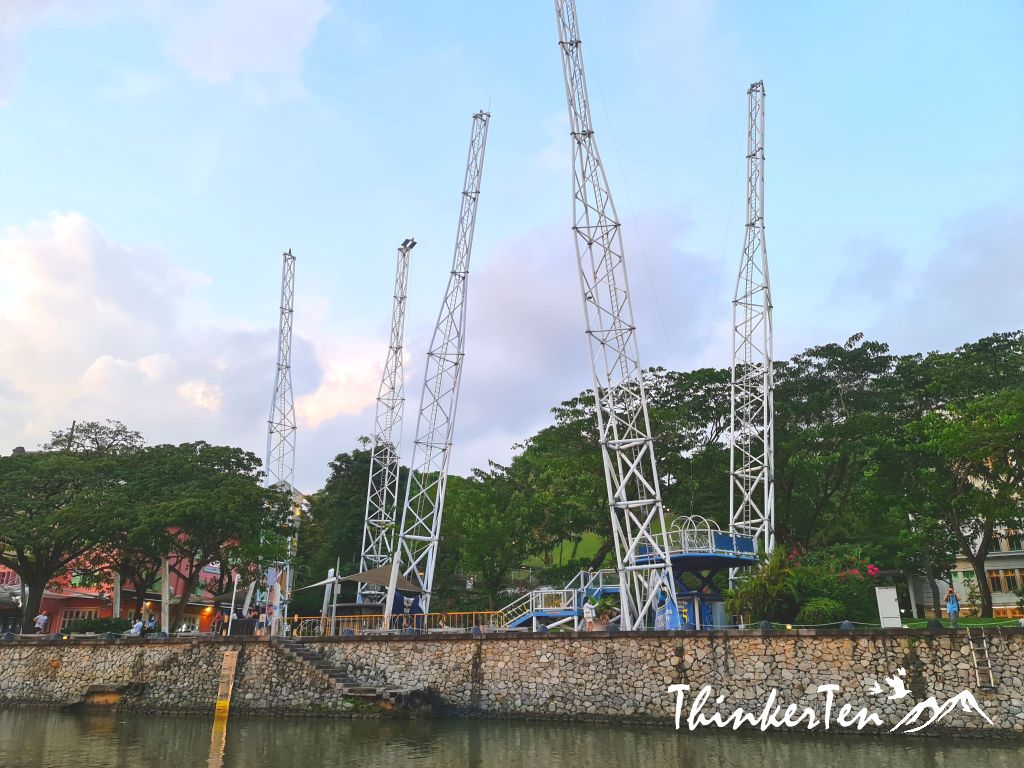 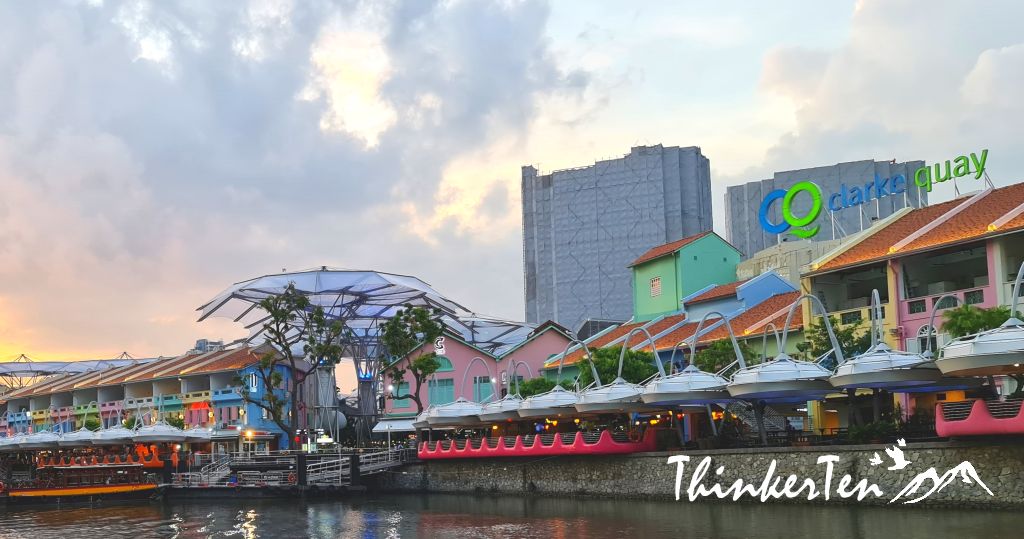 The Singapore River has been a busy trade center since modern Singapore was founded in 1819. During the colonial era, goods were transported upstream to warehouses at Clarke Quay. But pollution on the river was bad at that time, and foul smell when you walked by the river.

The father of Singapore, Mr. Lee Kuan Yew didn’t like that very much so he asked the government to clean up to Singapore River and beautify the surrounding from 1977 to 1987. After many years of hard work, the place has transformed a new face and turned into a flourishing commercial and entertainment area.

The buildings in Clarke Quay area are mostly restored and did not change much about their original characters.

There are a number of landmarks along the Singapore River that you don’t want to miss. The river cruise will air the introductory in the background but if you are sitting outdoor you may not hear it so well. 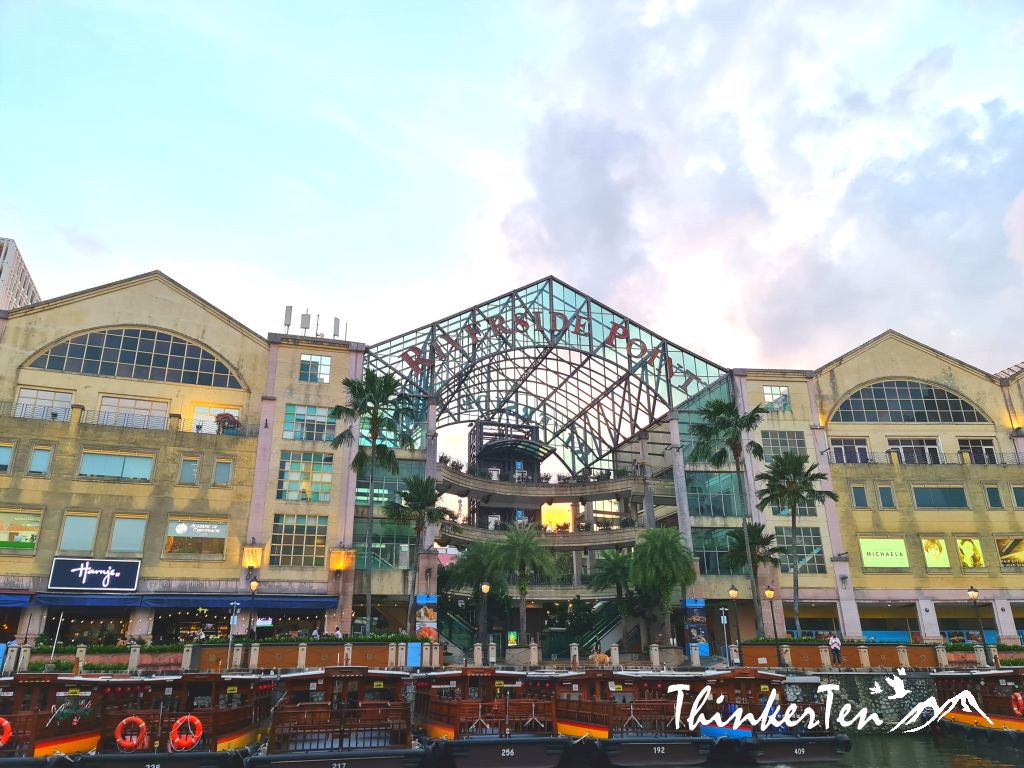 The whole duration of the cruise is 40 mins. It was slightly before 7 pm when we reached the highlight of the cruise. We were approaching Merlion Park and the CBD area. 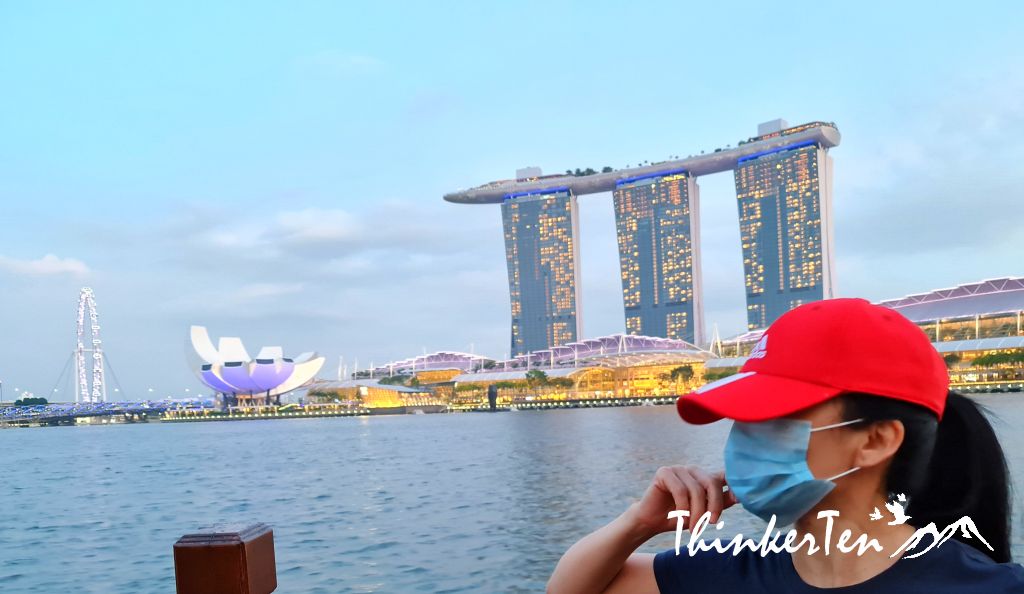 Well, you should also pay attention to Sir Thomas Stamford Raffles landing site. There is a white statue of Sir Stamford Raffles but his statue is not facing the river. You can see his back from the bumboat. (not in the picture as we could not manage to capture it.) 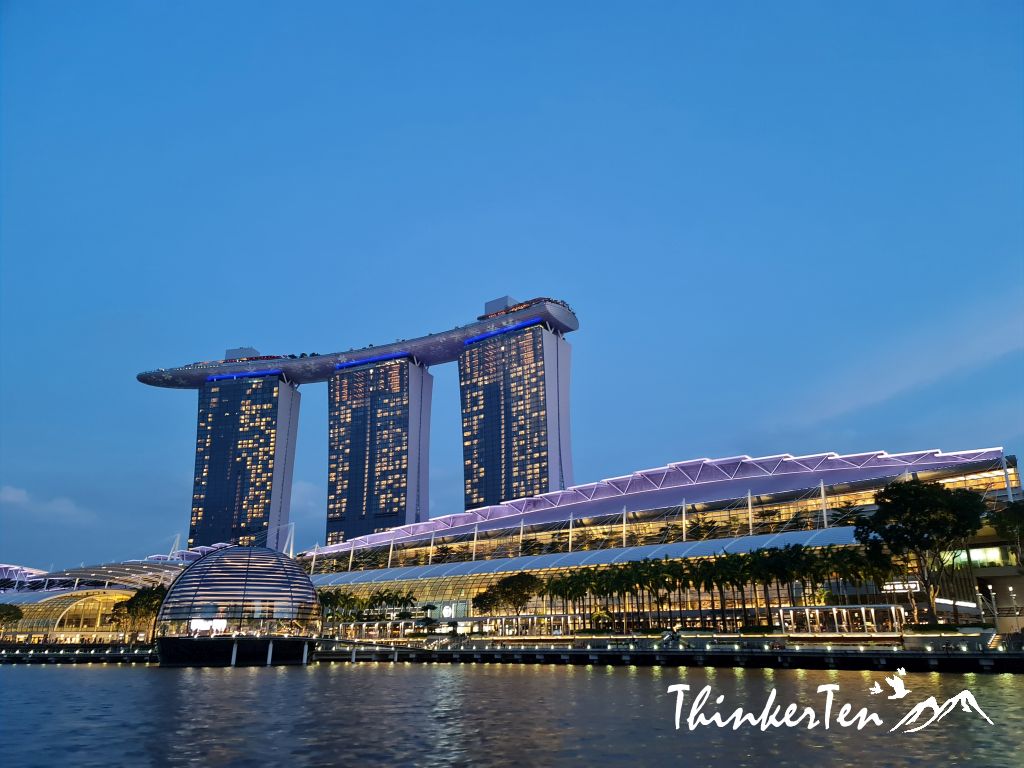 Did you notice the color of the sky turned from a lighter tone to darker one?  It is so pretty especially with the lights up from the buildings. 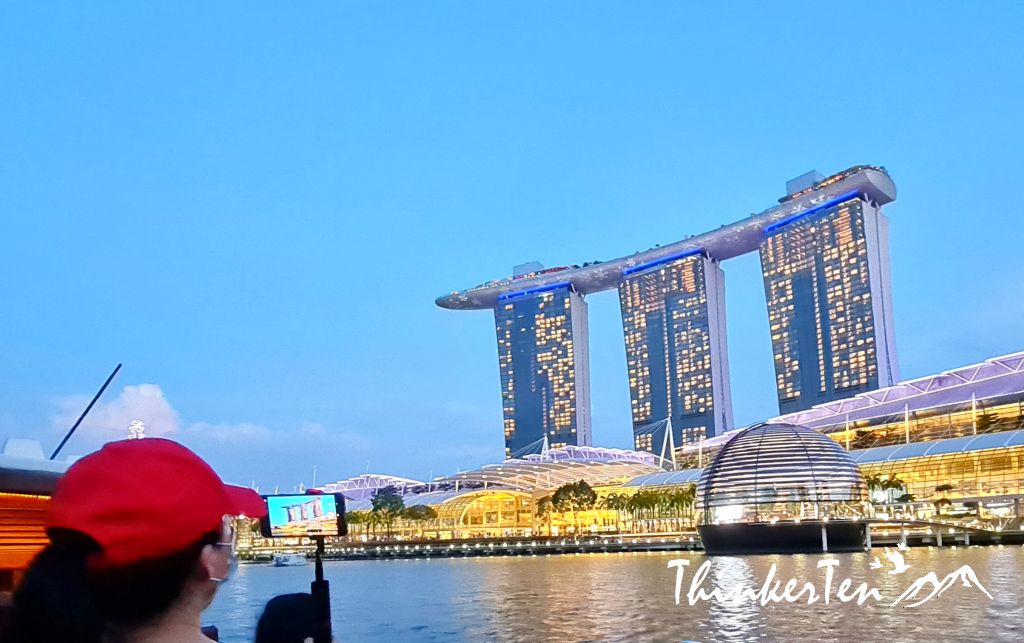 Next, come the most important landmarks along the Singapore River, the Marina Bay Sands This stunning architecture come with three large towers and an infinity pool at the top of the building. Marina Bay Sands or we call it MBS is an integrated resort that opened in 2010 and was one of the most expensive standalone casino property at S$8 billion including the land cost. 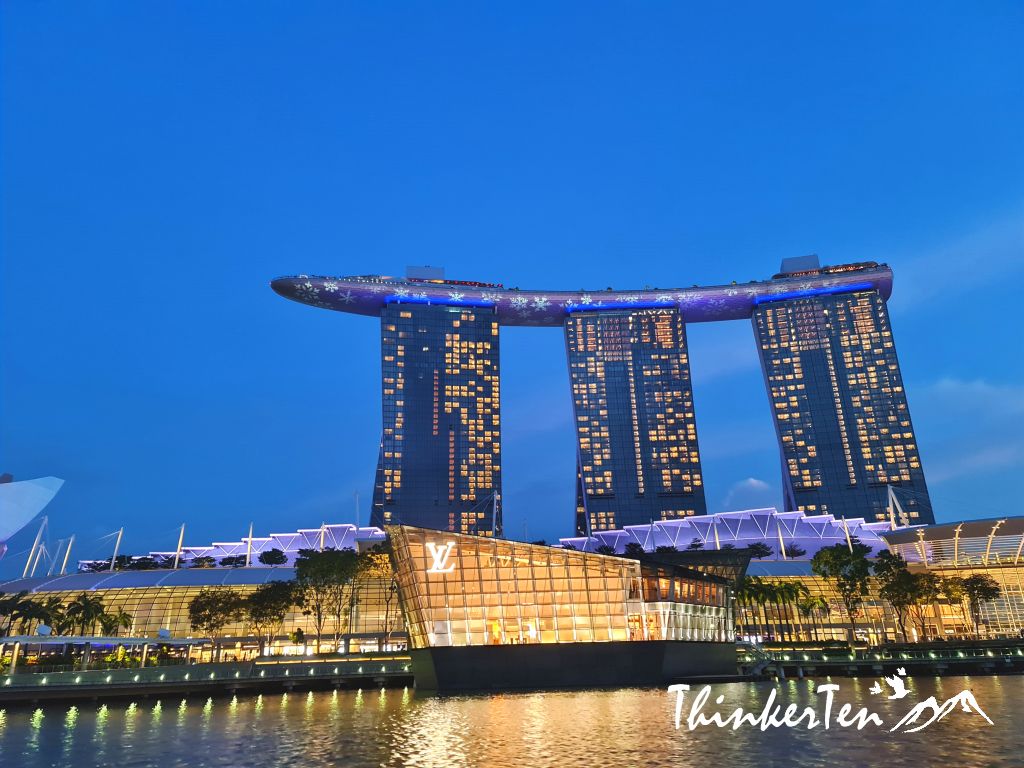 At the bottom, there is a transparent island floating on the water with a big LV logo, the two Crystal Pavilions are a further attraction adding to the vibrant Marina Bay waterfront promenade experience 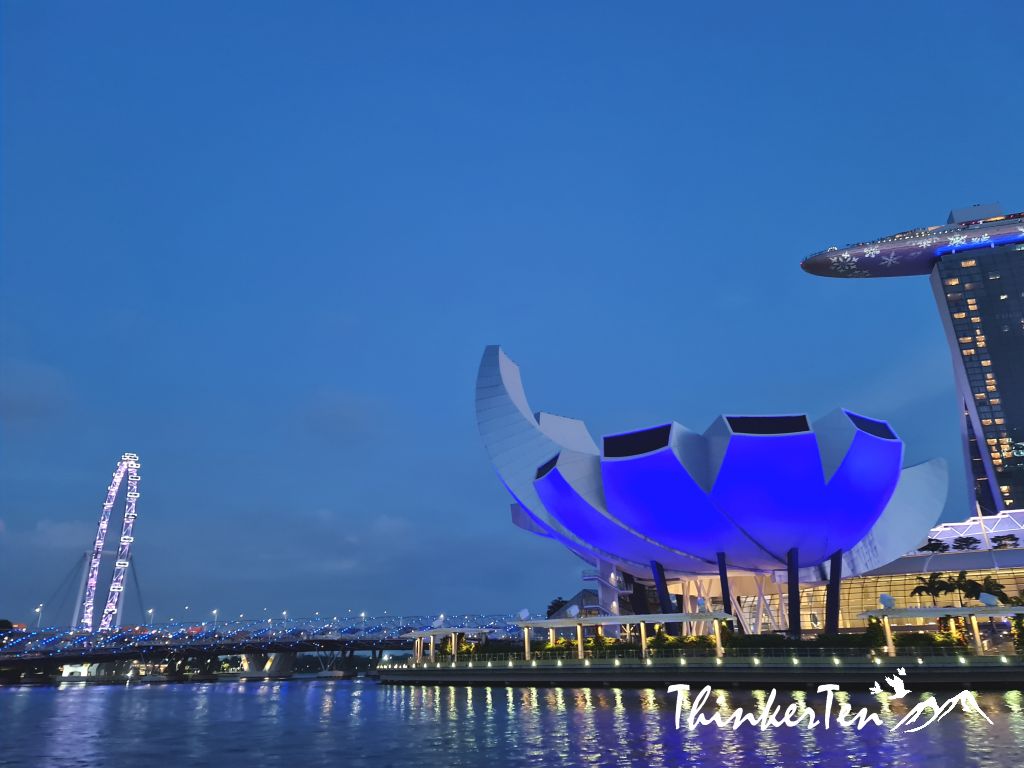 The Five Fingers Building is the ArtScience Museum

Some said it looks like a lotus flower, it is designed by the famous architect Moshe Safdie. 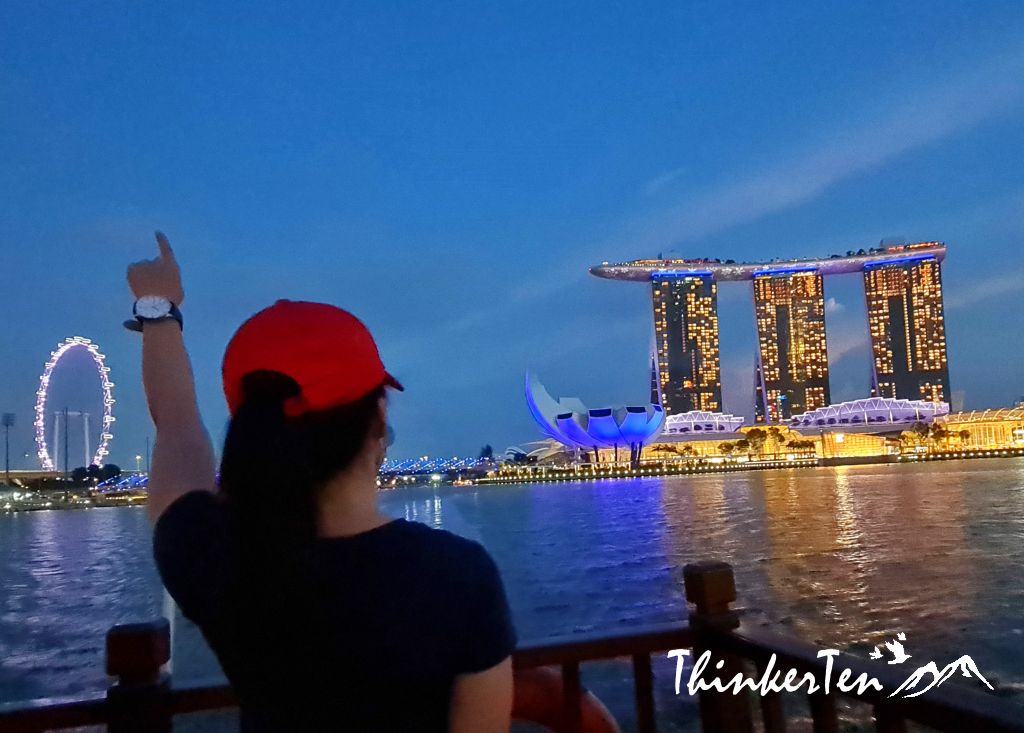 I think this is one of the best pictures so far, as it has all the important architectures, the MBS, the lotus and Singapore Flyer, all were nicely captured in this photo. 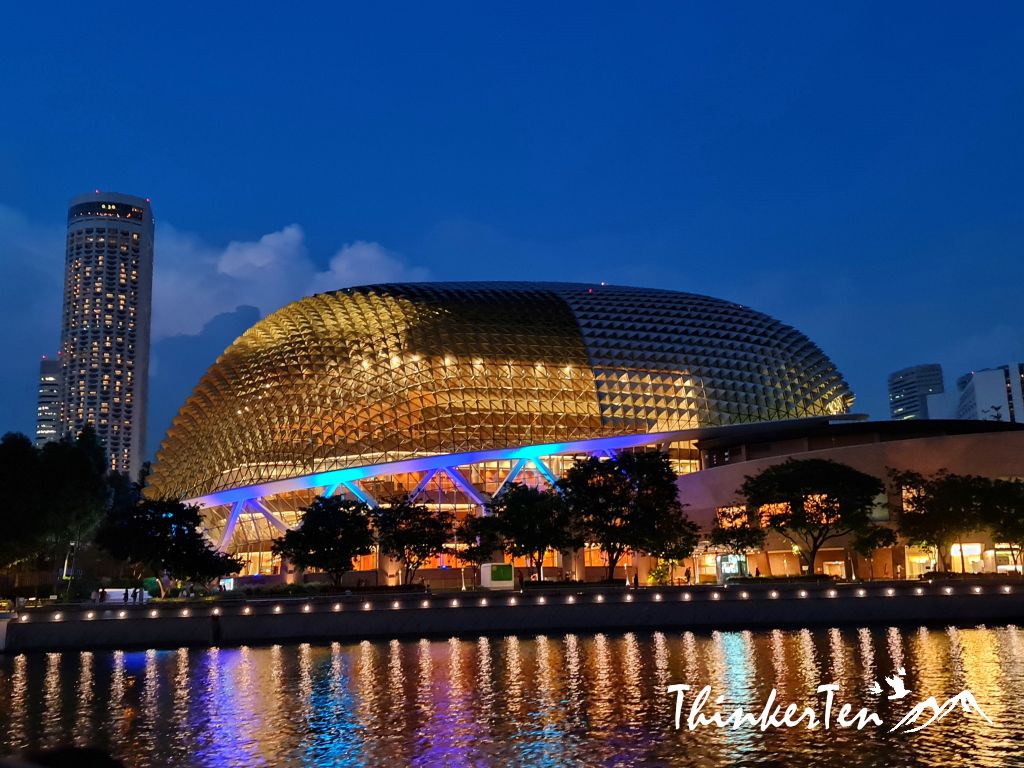 Don’t forget about the iconic Durian landmark, the Esplanade. It is one of the eye-catching buildings on the Singapore river. With the light up at night, it is just brilliant. Two rounded glass domes fitted with over 7000 triangular aluminum sunshades, it takes a lot of effort to clean these shades. The aluminum sunshades look like the spikes of the durian so locals called it “durian”. 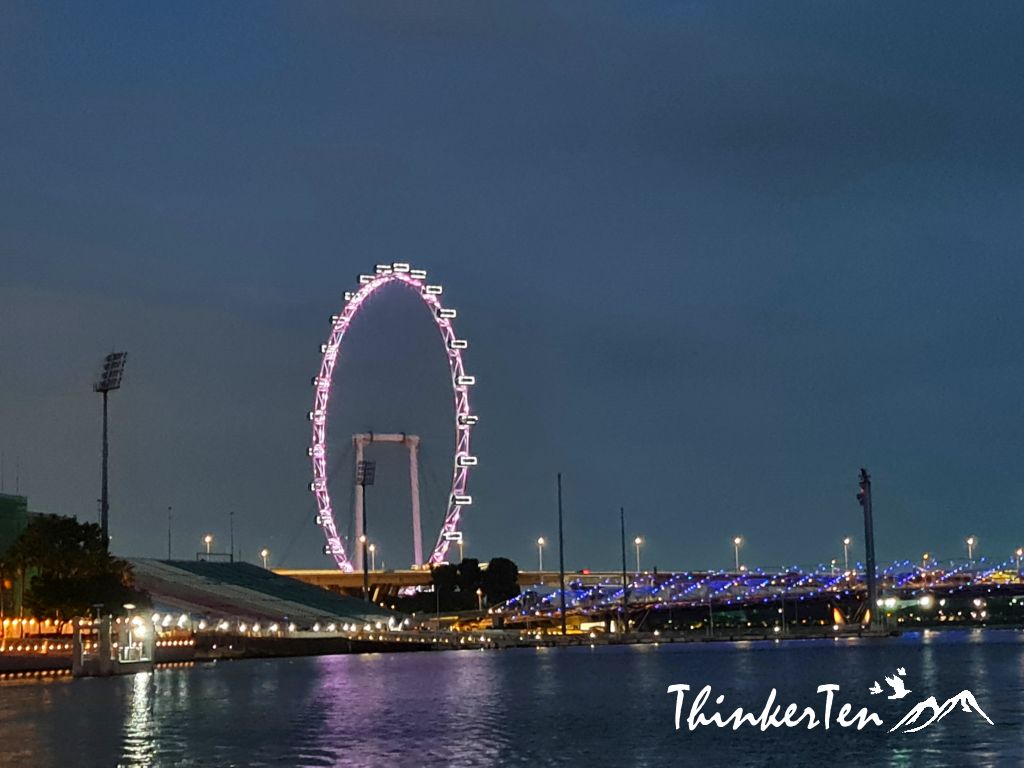 In London, they called it London Eye, and in Singapore, we called it Singapore Flyer. 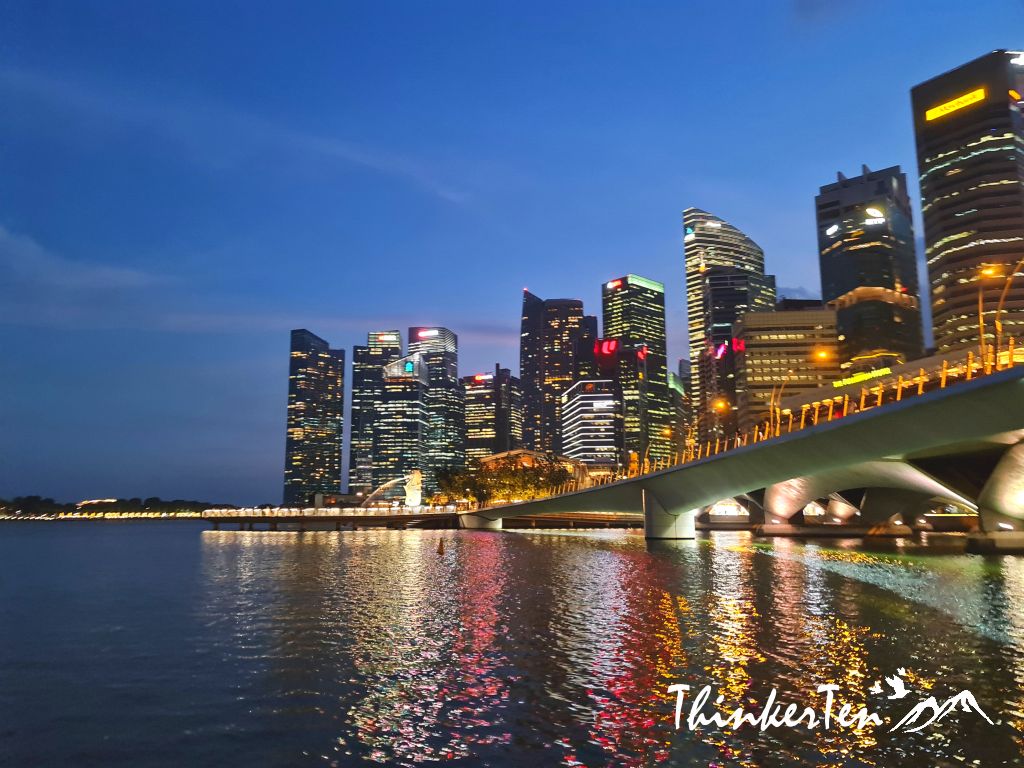 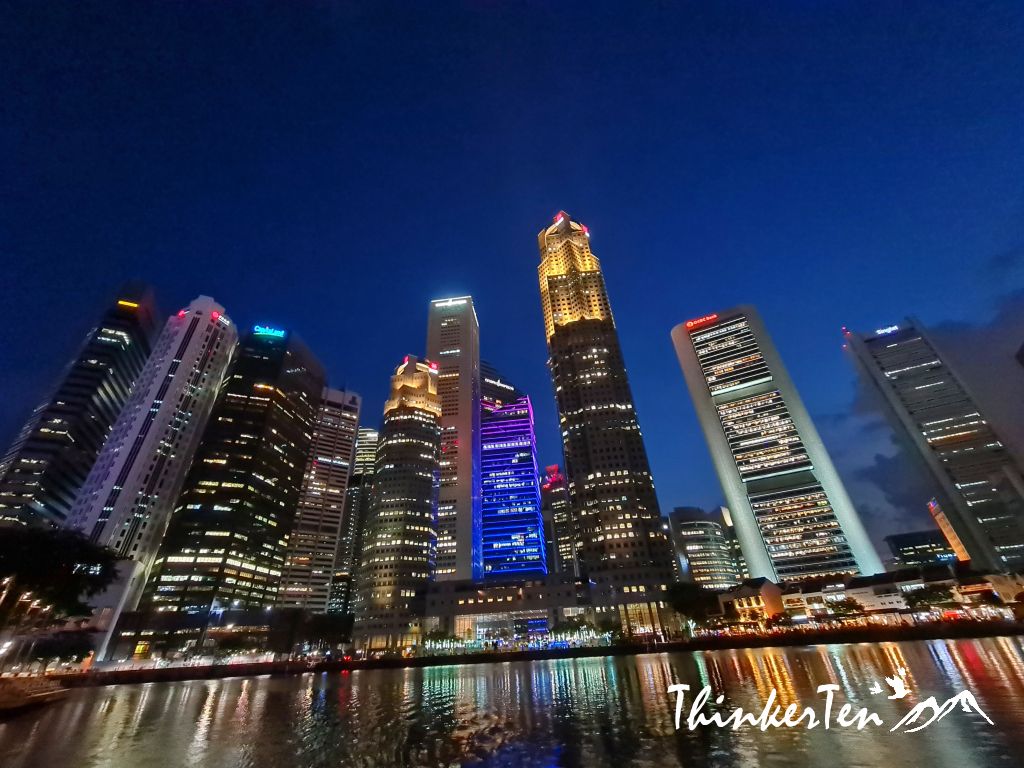 Shinning glass panels and massive skyscrapers appear to be rising out from below the water and hey, it is the CBD area of Singapore. 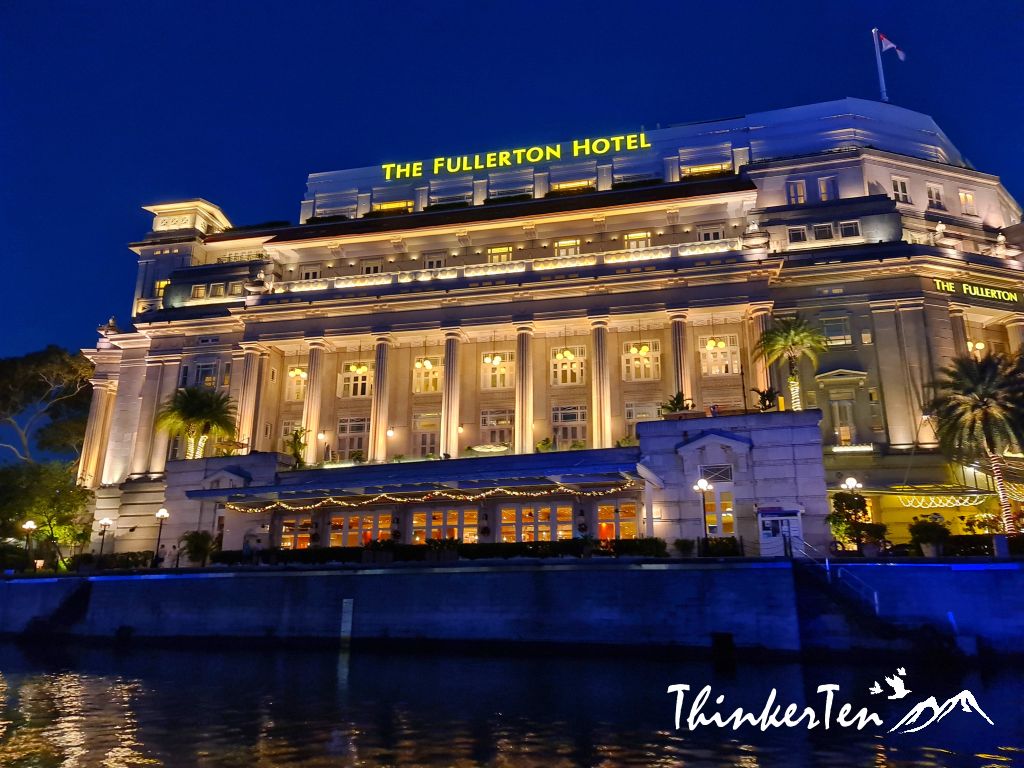 The Fullerton Hotel is one of the principal landmarks of Singapore. It was first occupied by the Post Office and the Exchange Building until 1922, then housed as hospital when the Japanese army marched into Singapore in 1942. Today, the building is home to 5-star luxury hotel. 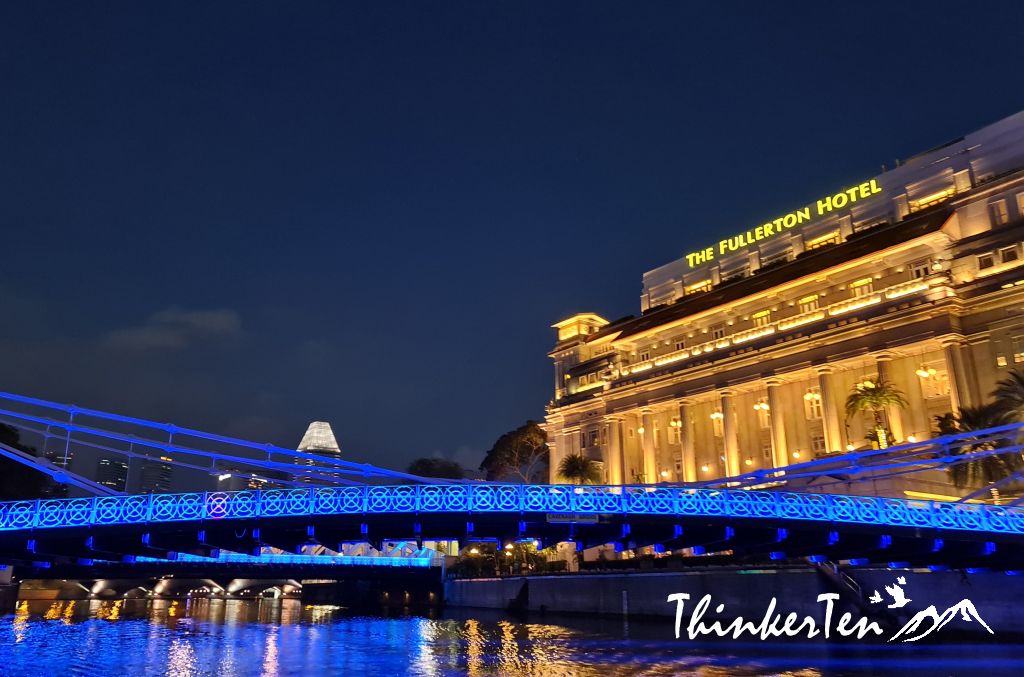 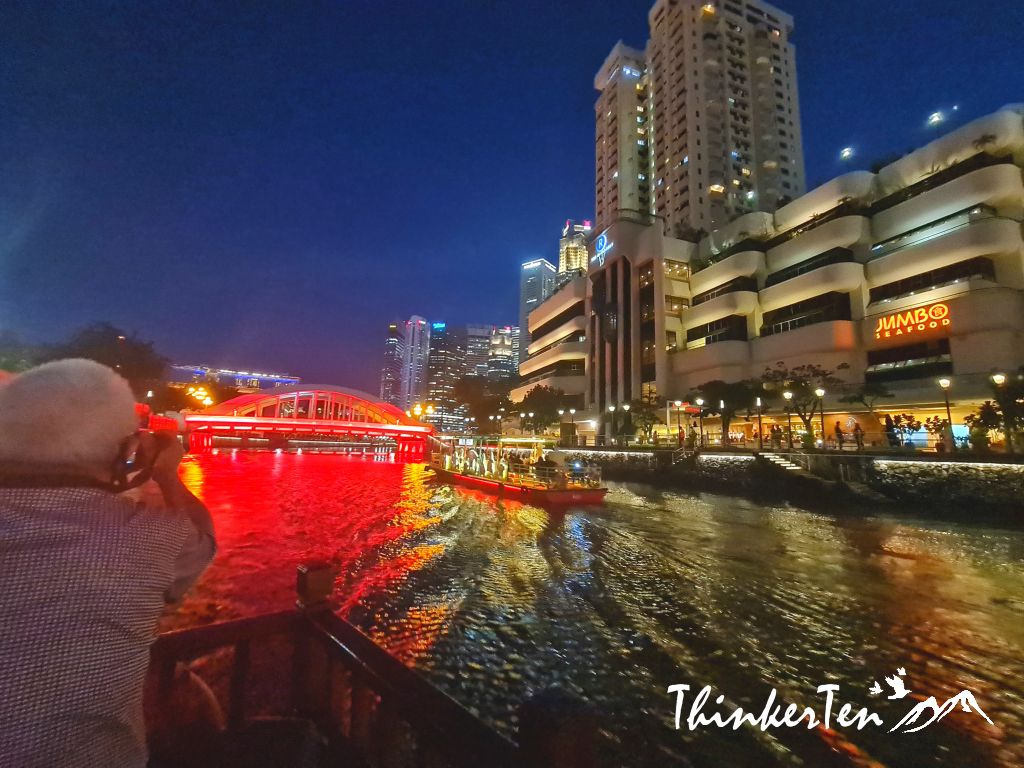 You can find more information at the youtube below: