We departed very early from Tonami Royal Hotel and arrived about 1 hour later in Tateyama.  There is a timetable for the train and we were rushing for the earliest departure at Tateyama station.  We parked our rental car near the Tateyama station. 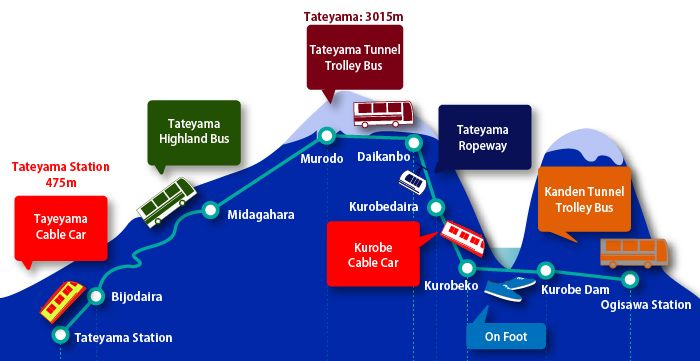 The Tateyama Kurobe Alpine Route is a unique and spectacular route through the Northern Japan Alps which is traversed by various means of transportation including cable cars, trolley buses and a rope way.  3 kind of transportation.  All I could remembered was getting up and down many times for different kind of transport vehicles.

Visitor normally came to visit the famous snow corridor from April to mid June.  We were there in November, so there was no snow corridor, big disappointment!  But still we were very happy to explore the beautiful scenery of Tateyama Alpine.  Above picture took in Tateyama 3015 m, highest peak of this route, weather was freezing cold because it started to snow. 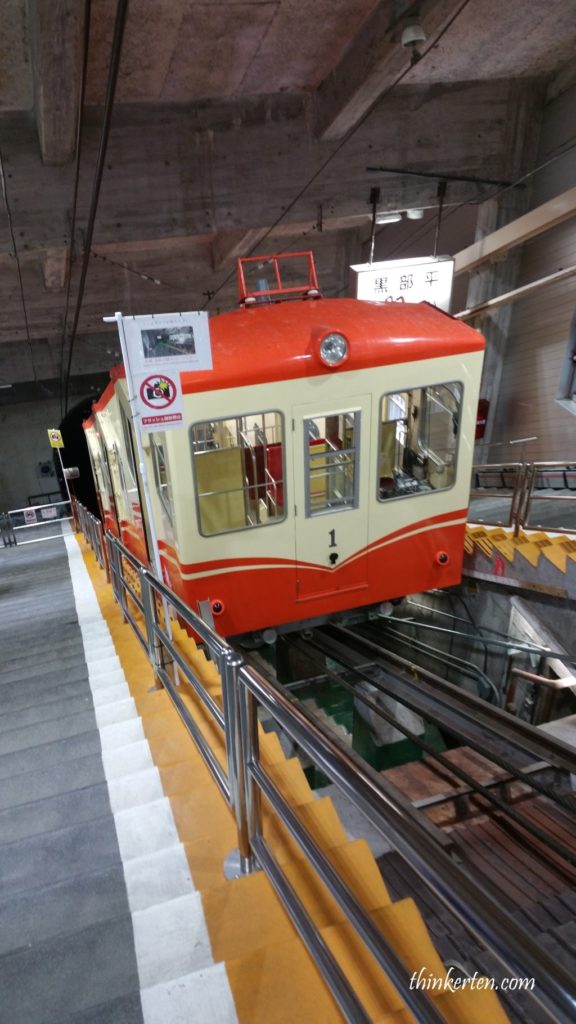 This is the Kurobe cable car that brought us to Kurobeko.  There are roughly around 1 million visitors a year that come to Tateyama Kurobe Alpine Route, but when we were here in November, not many tourists so we can take very good picture.  We were the only passenger on board. 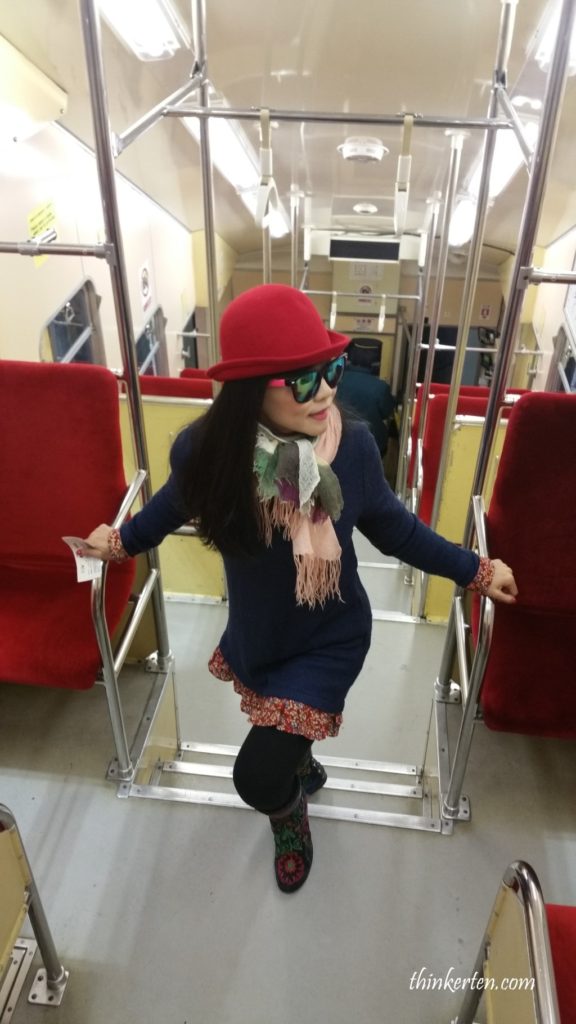 For the sake of environmental conservation and protection from snowfall, this segment runs entirely underground; the only cable car of its kind in all of Japan!

It was drizzling when we arrived at Kurobeko.  We were lucky to see a beautiful rainbow arch over the mountains.  What a good timing to arrive at Kurobeko.

We walked from Kurobeko to Kurobe Dam by foot.  There is a long bridge link to the Kurobe Dam. 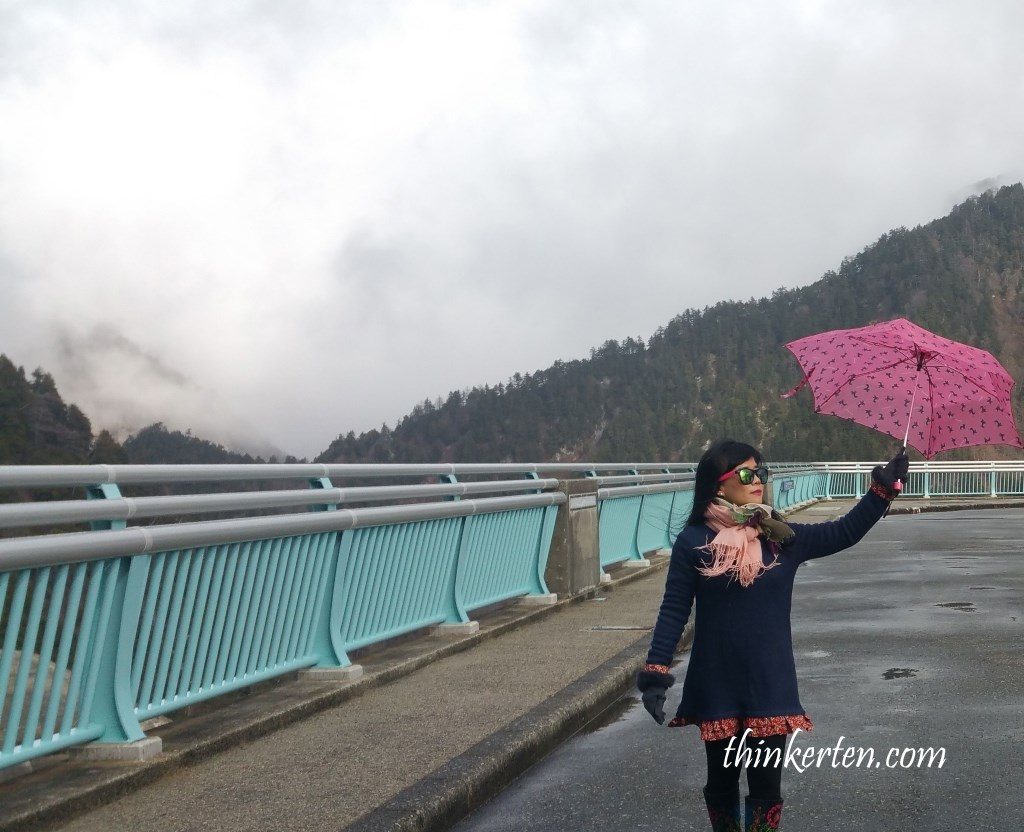 The 186 meter tall Kurobe Dam is especially spectacular when it discharges water between late June and mid October and it is also the tallest dam in Japan. 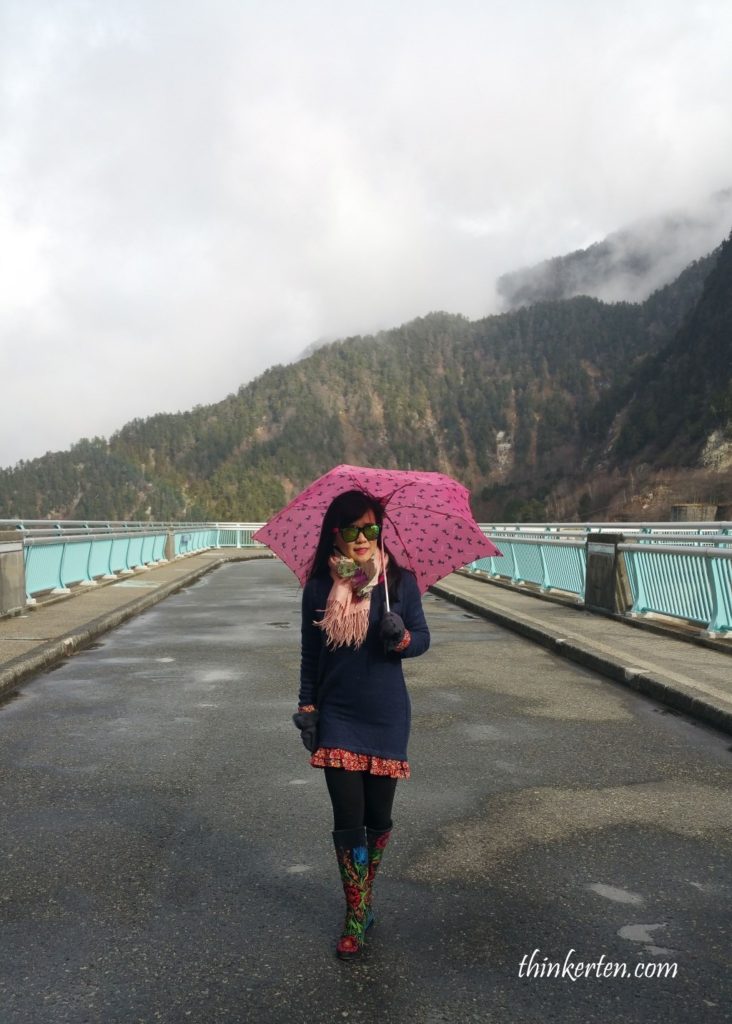 You need to plan your trip early in the morning as the total route took us about 7 hours till Kurobe Dam, we did not go to Ogisawa because we were afraid we may not have enough time to make our way back to Tateyama station.  There last ride back is 3 plus, once you missed that last ride, you will be stuck in the train station and stay overnight. 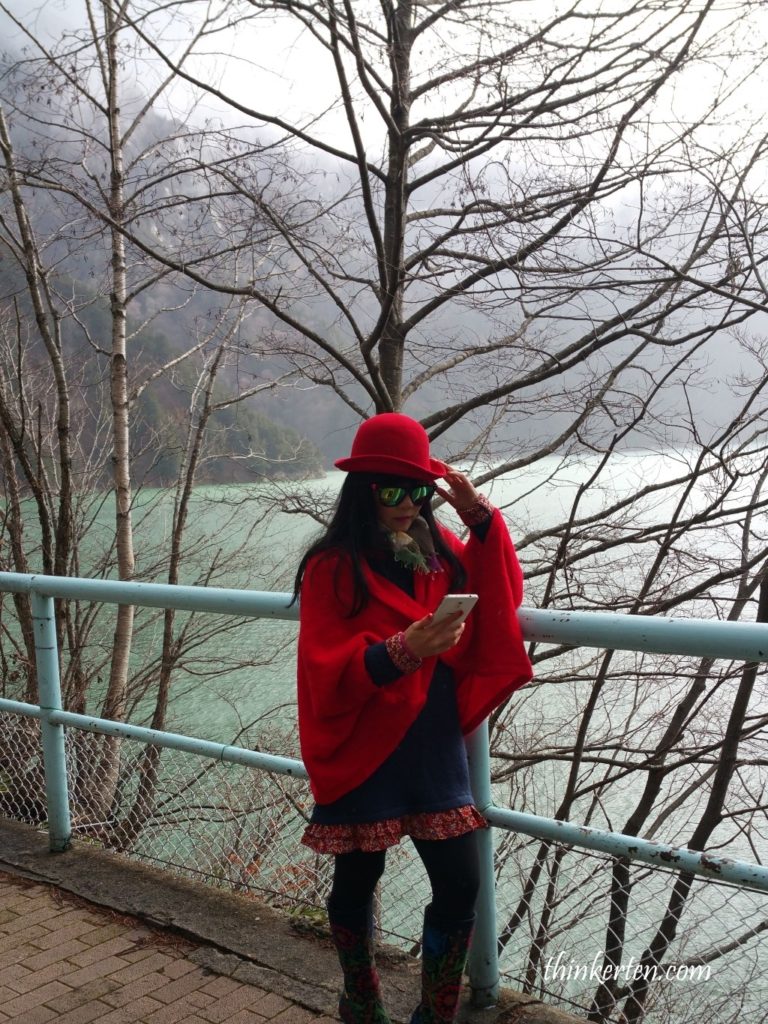 As you can see the water in the dam look so blue and clear.  We started to make a move when it started to drizzle and snow a little. 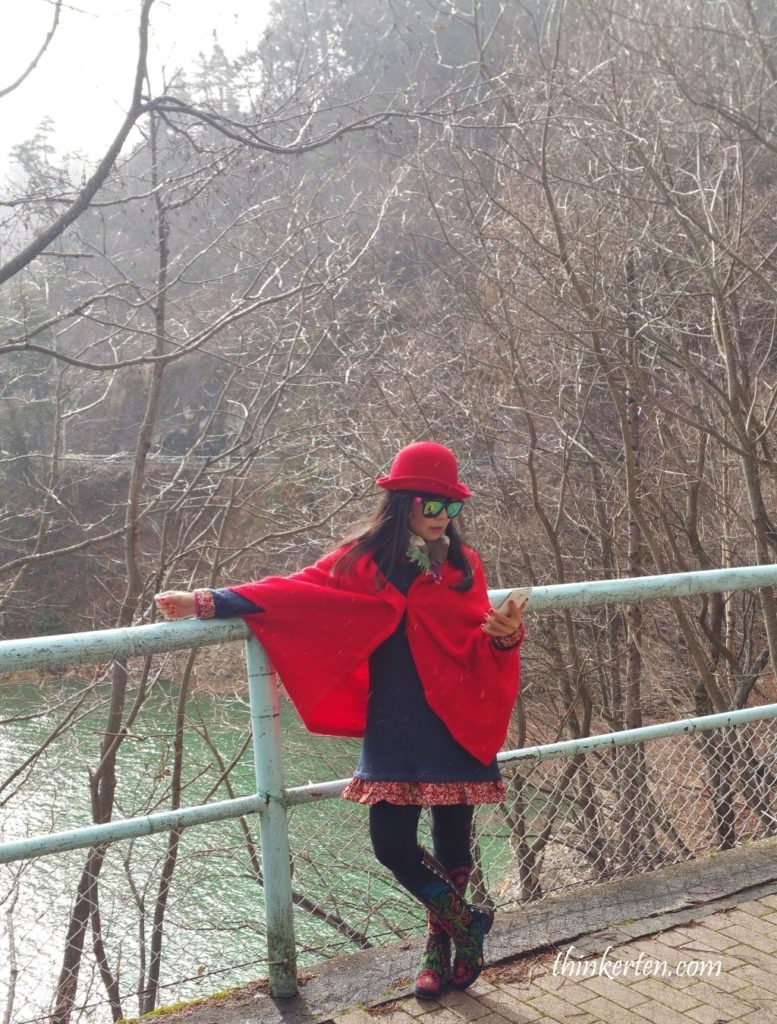 We arrived at the Tateyama train station where we parked our car at around 4plus and the sky turned quite dark.  We were quite nervous as we need to navigate to go our hotel.

This hotel is very near the Tateyama station but it was not that easy to find.  I stopped by a shop and asked a lady if she know the place as we have some problem with the GPS. The kind lady told us that she can show us the way to the hotel because she was on her way to pick up her children, about the same direction.

We were glad to have this kind lady to help us, else we may need longer time to arrive in this hotel as it was completely dark and hardly any street lamp post.  The below picture was taken in the early next morning. 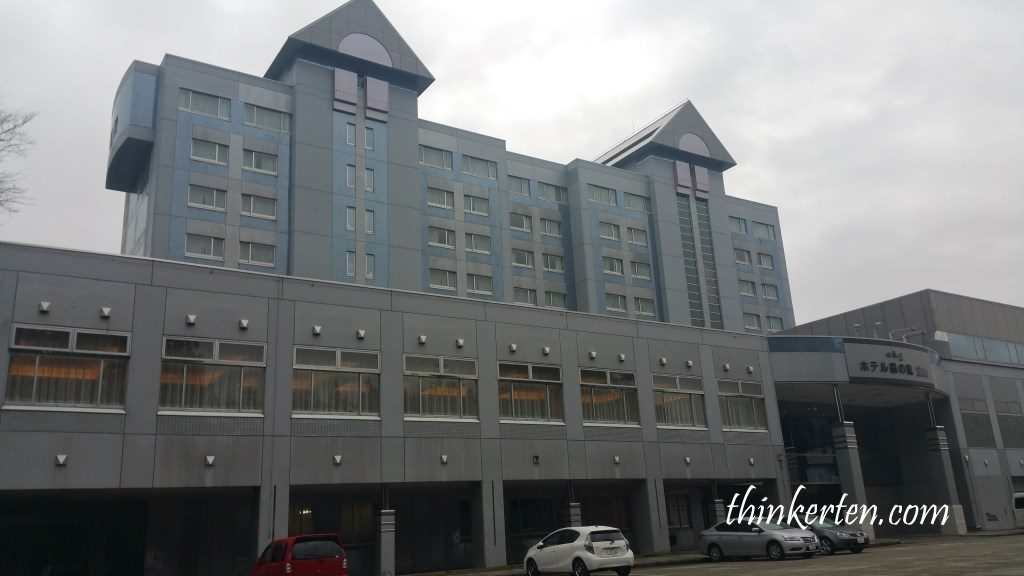 Hotel Morinokaze Tateyama is also located in the middle of the mountain, picture taken in early morning of the following day. 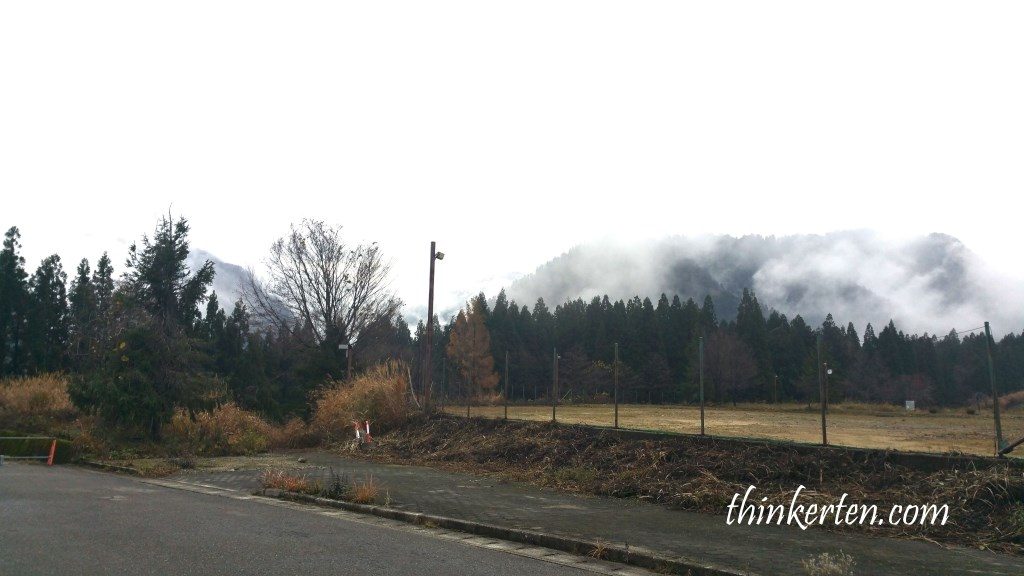 Once we checked in the hotel, there is a corner to choose the Yukata/bathrobe.  There are many type of flower prints to choose from and different kind of Obi/belt to match with.  It was very fun for us to choose the Yukata we wanted to wear for the night.  Restaurant in the hotel was fully booked for function, but the staff was kind enough to help us ordered some delivery to our room.  We ordered Tonkatsu set meal and it was so yummy.