Today I have equipped myself to experience climbing Hua Shan/ Mount Hua. Talking about this mountain, I would think of the martial arts and Kung Fu. 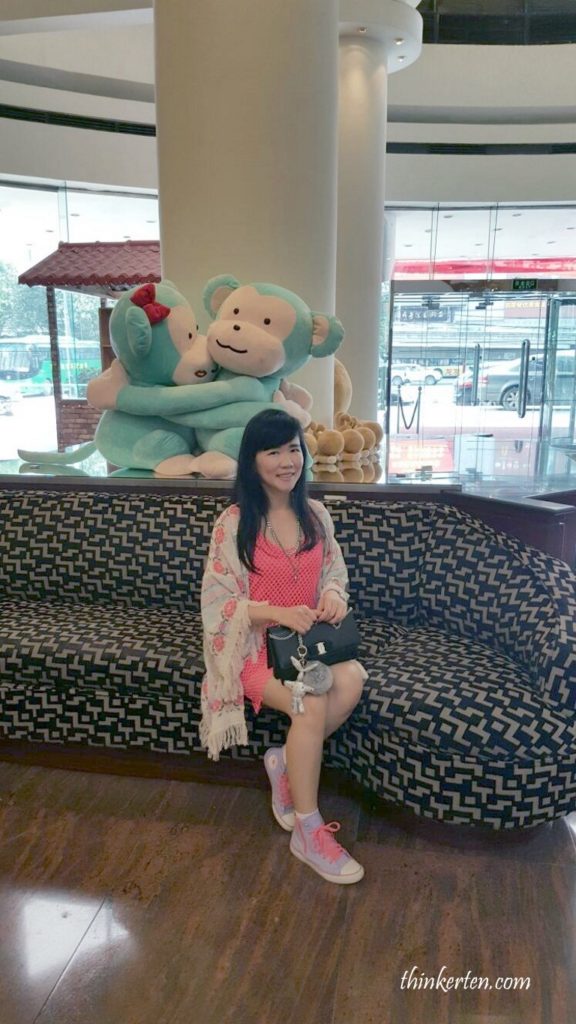 Hua Shan is a mountain located 120 km east of Xian, Shaanxi province. It is one of the China’s Big Five mountains, also considered the most scenic spots in China.  I was walking to the ticket hall for cable car up to Hua Shan. 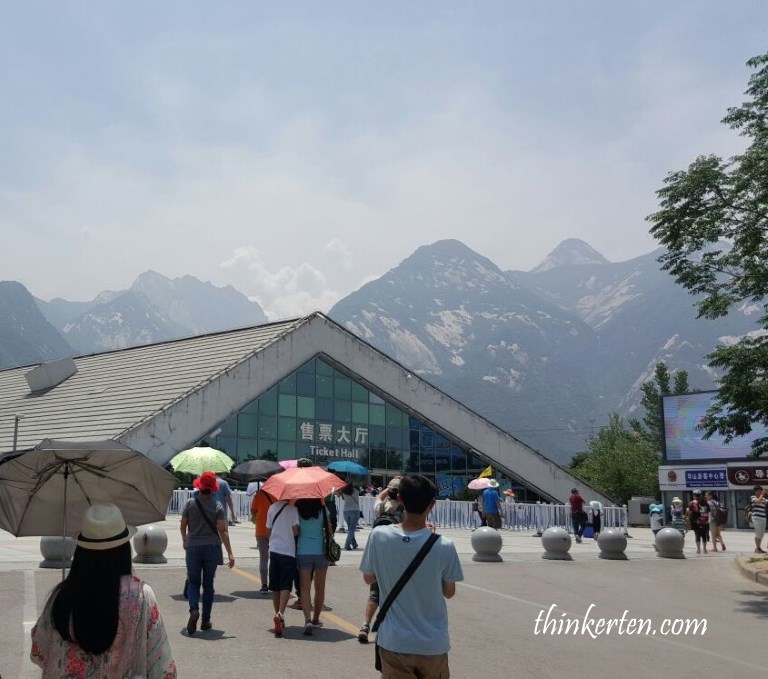 Hua Shan is well-known for its dangerously high or steep trails and cliff.  Many tourists fell and die each year.  Quite scary but I was very excited to see Hua Shan myself after seeing so many Kung Fu movies during my childhood day. 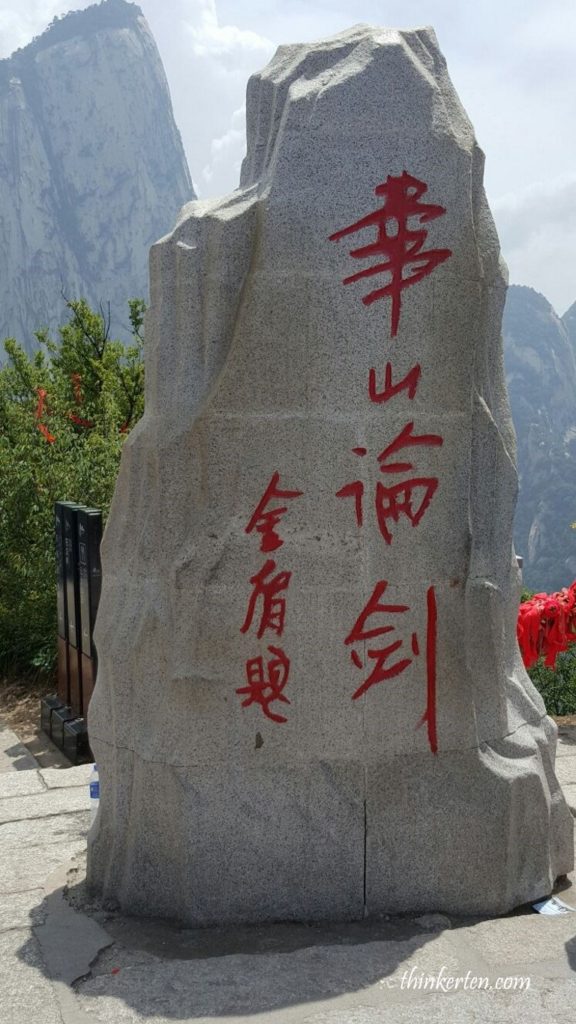 There are few peaks you could explore, choosing one peak to conquer as your challenge. 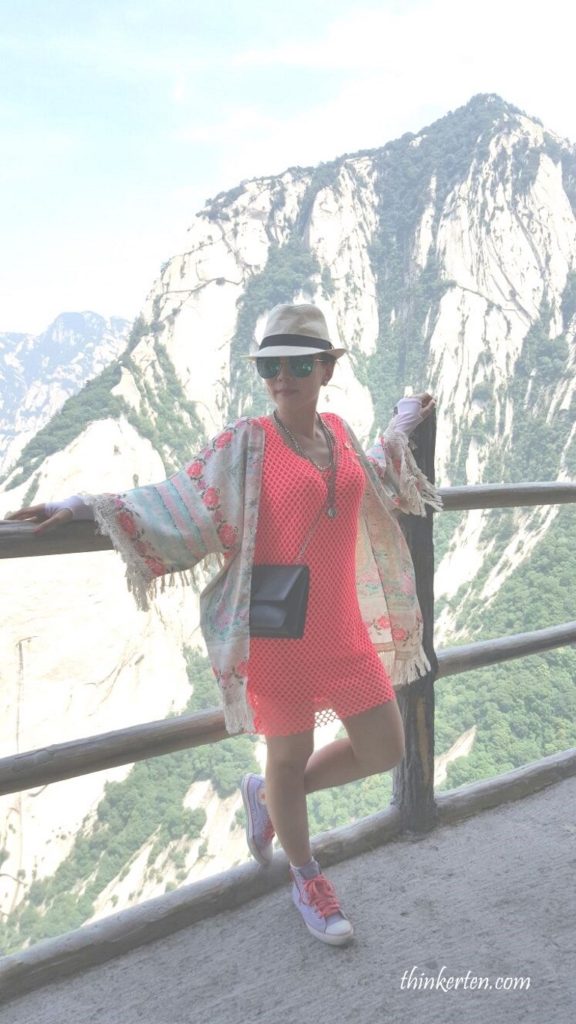 Mount Hua is distinct in China, you see most mountains are of limestone, in consisting of a huge body of granite, formed during the cretaceous period over 100 million years ago.

Look at the below picture, the lady in blue and me were both stunned when we saw how steep the trail is.  You could imagine how bad it is from our face expression. 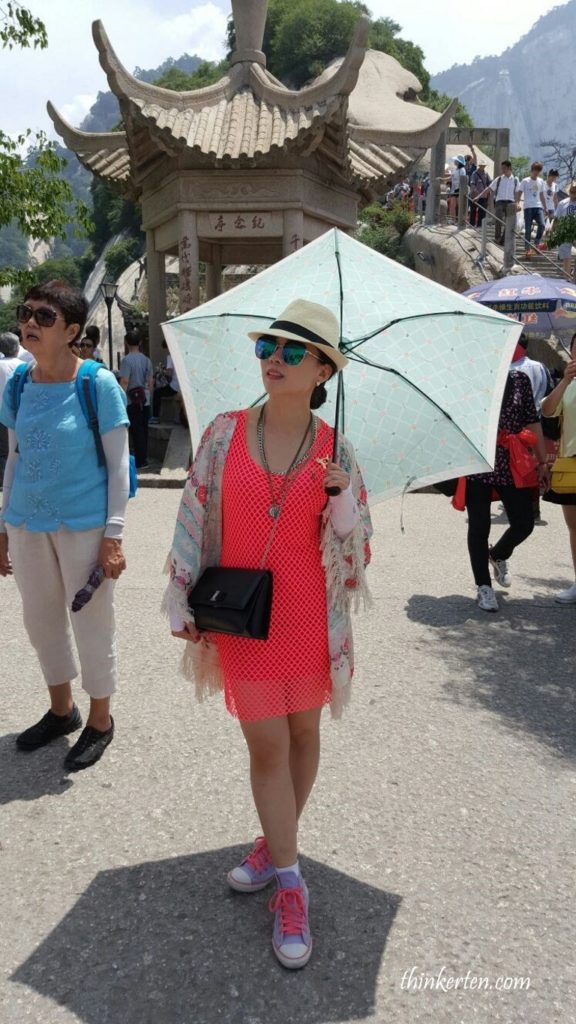 I finally made it to the higher point, not the highest but I was quite happy about where I have conquered, not many people managed to made it up here.  There are some steep slopes where there is no steps so you have to climb or I would said crawl using both hands, like a spiderman move.

The below steep stairs up is almost 90 degree up, very frightening indeed.

The view is spectacular once I was at the top, I sat down for a while and dreaming how the Kung Fu heroes hopping in between each mountain, fighting with each other using their best swords, this is called “Hua Shan Lun Jian”. 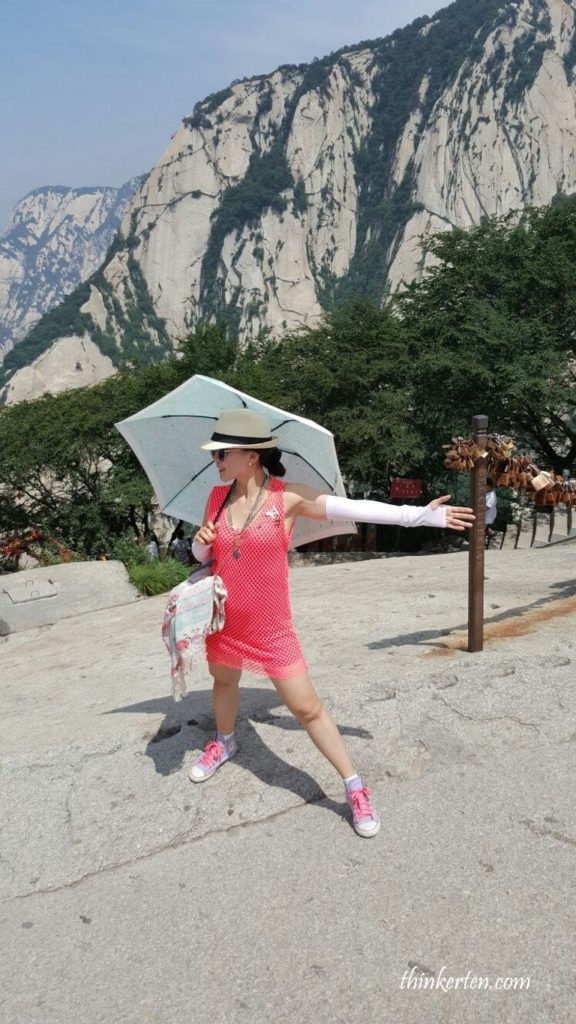 This place is full of tourists so just be extra careful, especially at some of the edge of the cliff.

Do wear a comfy shoes, best if you wear hiking boots, plenty of sunblock and wear a hat to avoid sunburn.  If it is not windy it is wise to bring an umbrella.  You can also wear gloves to hold on the rail  beside the steps up the steep mountain.  In rainy day or winter, the ground can be very slippery so bring in a pair of gloves to hold on to the rail can never goes wrong.

Roast duck in Xian tasted similar to Beijing Roast duck, I really couldn’t tell any difference.  I love roast duck, especially the crispy skin along with plum sauce and thin crepes and some cumcumber in which to wrap it all

I know it could be very unhealthy and oily but it is just too yummy to resist.  I had a satisfying feast in the Xian Roast Duck Restaurant. 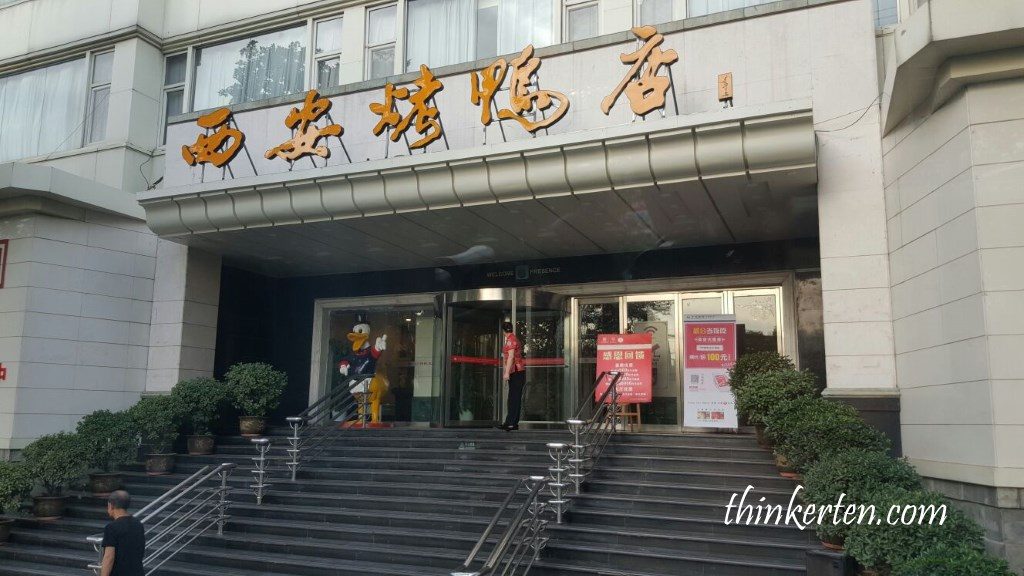 After dinner we walked to the nearby shopping area near the hotel and do some shopping.  I have bought few pairs of shoes as there were on sales.  Met some old ladies on the roadside selling their knitted things.  Bought 2 pairs of baby knitted shoes,  very tiny just suitable for my dog.  Rmb 20 one pair. 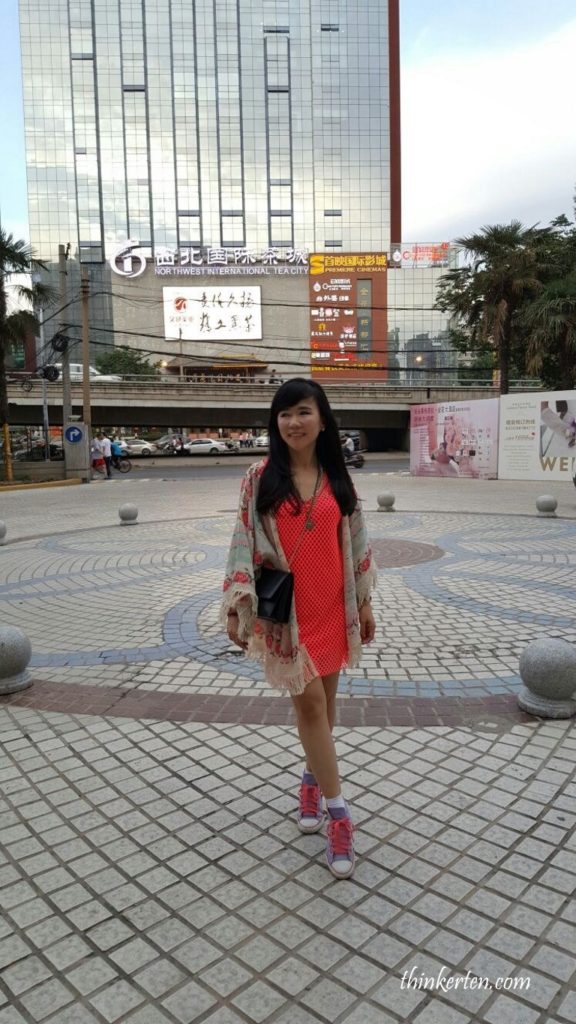 Xian Metro also known as Xian Subway, it has 3 lines in operation.  Xian is the starting point of the Silk Road and home to the Terracotta Army of Emperor Qin Shi Huang but beside that, it is also an important cultural, industrial and educational center.  The Xian JiaoTong University/西安交通大学 is located in the city of Xian, passed by the University while we were in to town the other day. 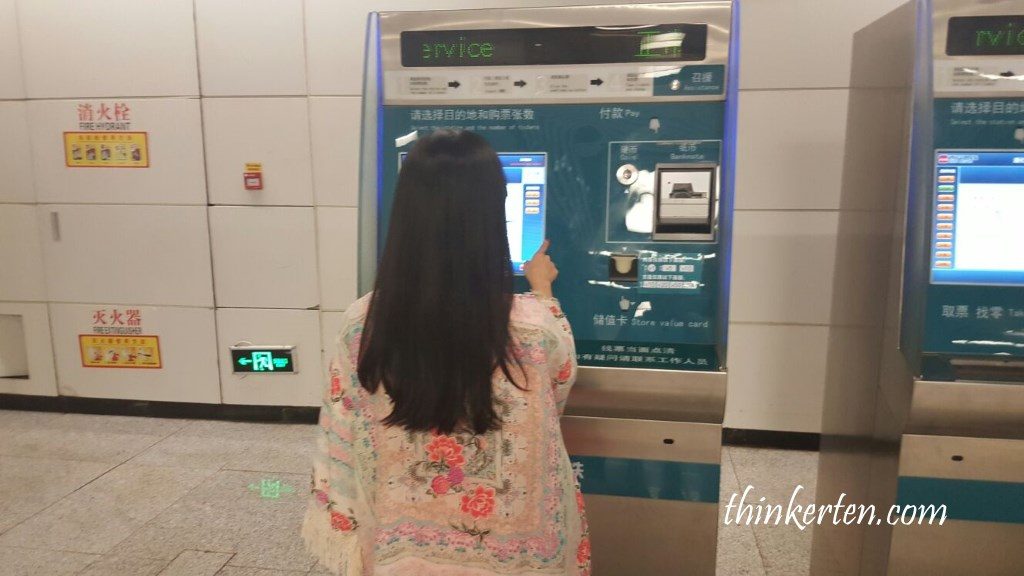 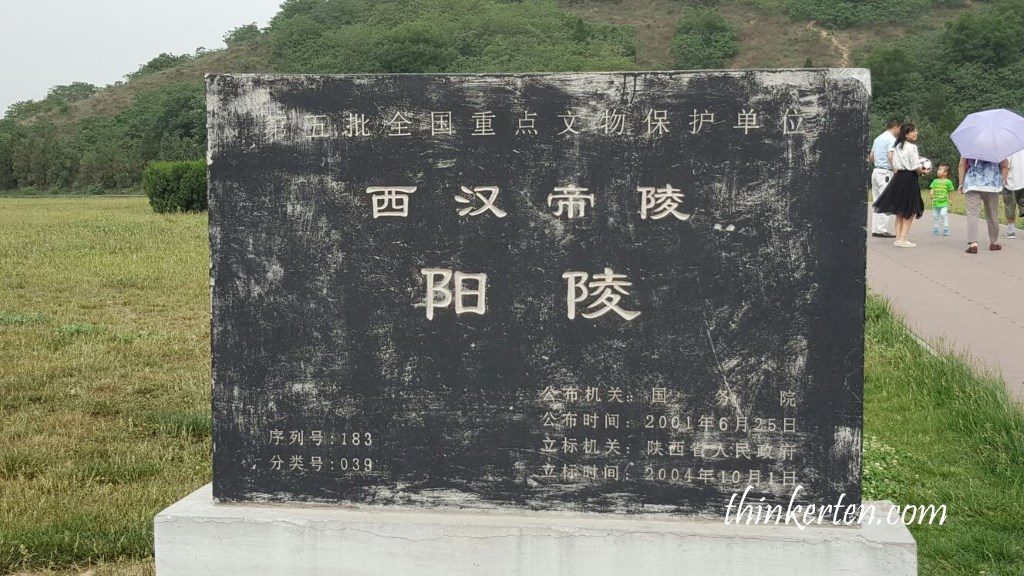 This place is located about 20 km north of Xian City. It is a joint tomb of Liu Qi Emperor Jing of the Han Dynasty and his Empress Wang. 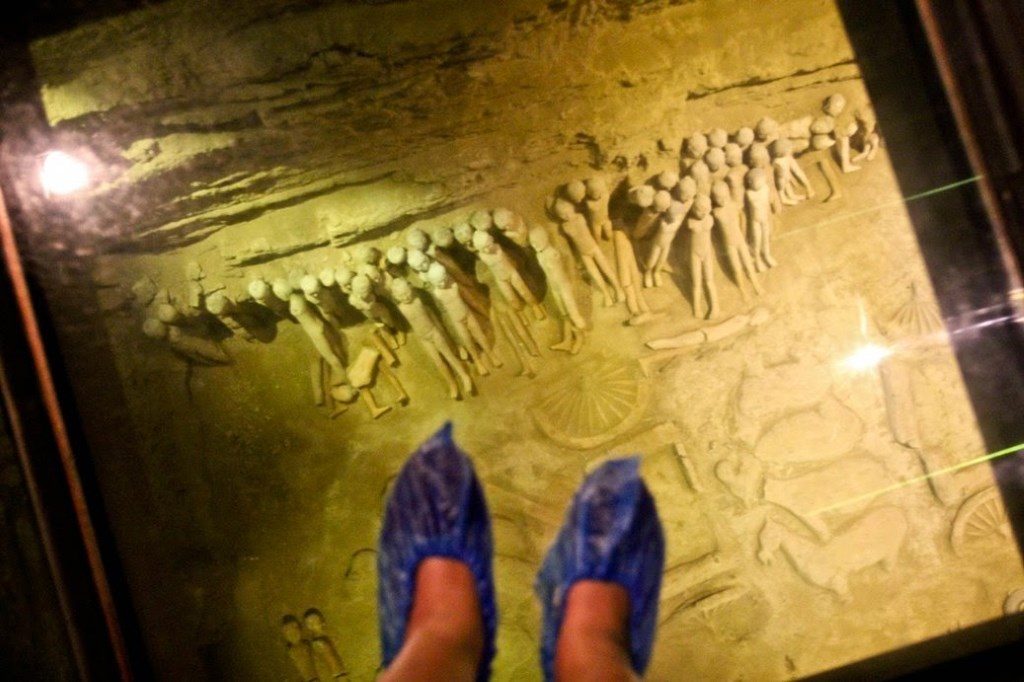 There is an interesting underground museum, where you need to look down instead of looking at your left and right for the olden days artifacts. 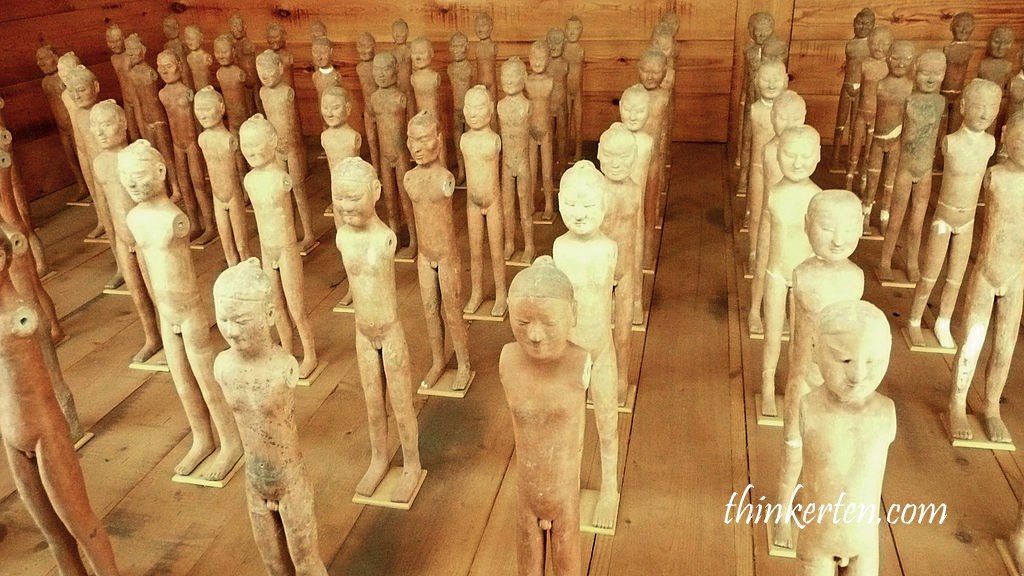 Emperor Jing is a very thrifty guy, he ordered to built his terracotta warriors only 1/3 size of a real human being which saved a lot of cost.

These terracotta warriors are very mini as compared to the Emperor Qing Shi Huang’s terracotta.  You will wonder why there is no arms on these terracotta. The miniature terracotta arms were made from wood and there were actually silk clothing when it was buried together with the Emperor Jing.  After thousands years, only the body which is made from clay left for us to see today.

This site is located at the midway to Xian Airport.  Here you have less visitors as most people fly in Xian to see famous Emperor Qing Shi Huang terracotta army.    However I was glad to made a trip here to find out more of other terracotta in different Dynasties.  With the different type of terracotta built, you would roughly guess and imagine the Emperor characters and personalities many thousand years ago. 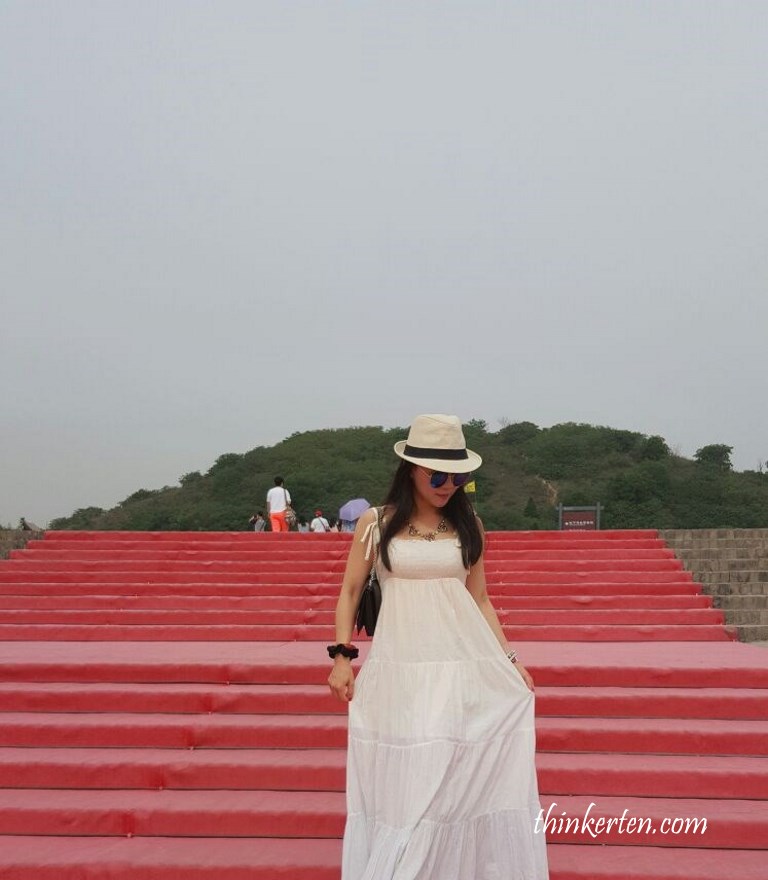 China Xi’an 4 – Colors of the Terracotta warriors were faded within minutes after the archaeologists dig it out !

Self Drive in Malaysia Part 1 – Cameron Highland, why Founder of Singapore, Mr Lee Kuan Yew love to bring his family here for vacation?