From Cambridge to Oxford took us about 3 hours, it was a dizzy trip as there are so many roundabouts.  I know in UK it is a land full of roundabouts, almost 10,000 big and small roundabouts!  Some are so big you can even find a pond with some ducks, a windmill or even an IMAX building in the roundabouts.  Roundabouts are an essential traffic management system as they provide space for gardening, sponsorship and sculpture.  We were overwhelm by the numbers of roundabouts in UK, some roundabouts even have more than 4 exists and can be very confusing if you are not used to roundabouts in your country.

The service area is big and has many cafe and takeaway shops.  There is also M&S supermarket if you need get some salads, drinks, fruits etc. 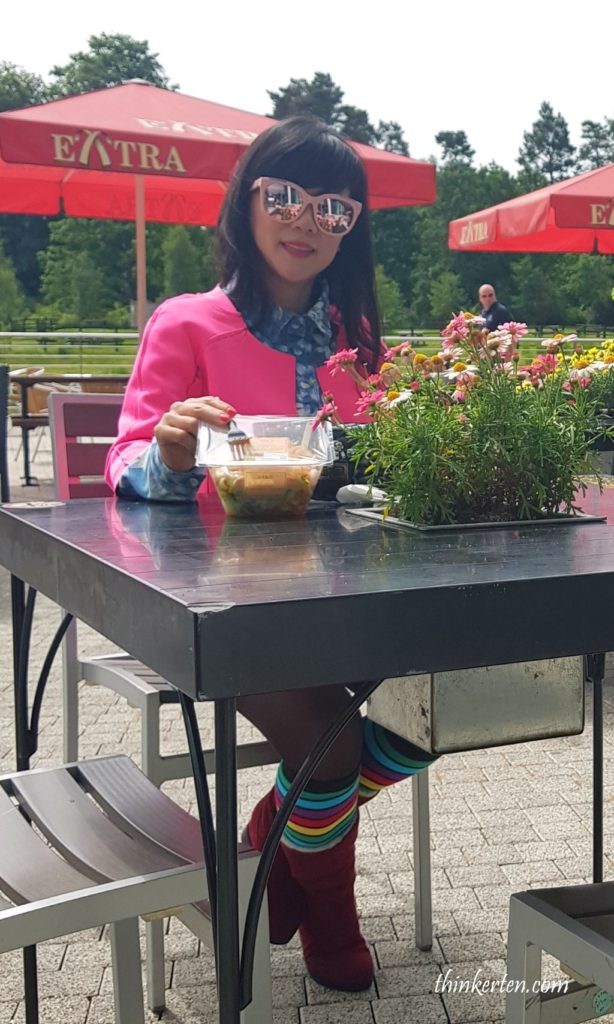 Since the weather was good we choose to sit outside, we bought a prawn salad from M&S which tasted super nice.  About GBP 3.00 +

We also bought some chocolate truffles from M&S, tasted super yummy.  Don’t have time to do shopping?  You can always do on the service area.

Since we have been to Cambridge so we also wanted to have a look at Oxford. These two universities are so competitive, we wanted to see the difference, well, at least the architecture side of it and the ambient. 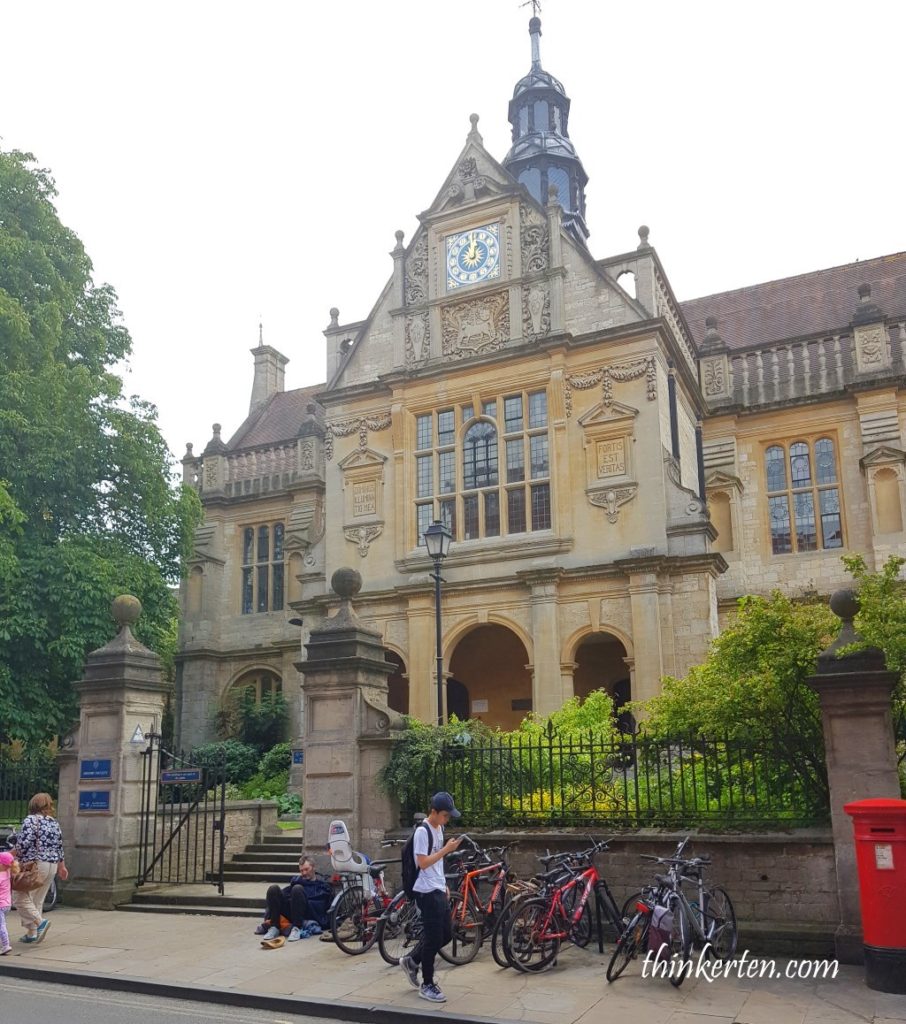 Oxford University is the oldest University in UK, it was said that some Oxford academics fled north-east to Cambridge where they established what became the University of Cambridge. The two universities are frequently jointly referred to as “Oxbridge”. 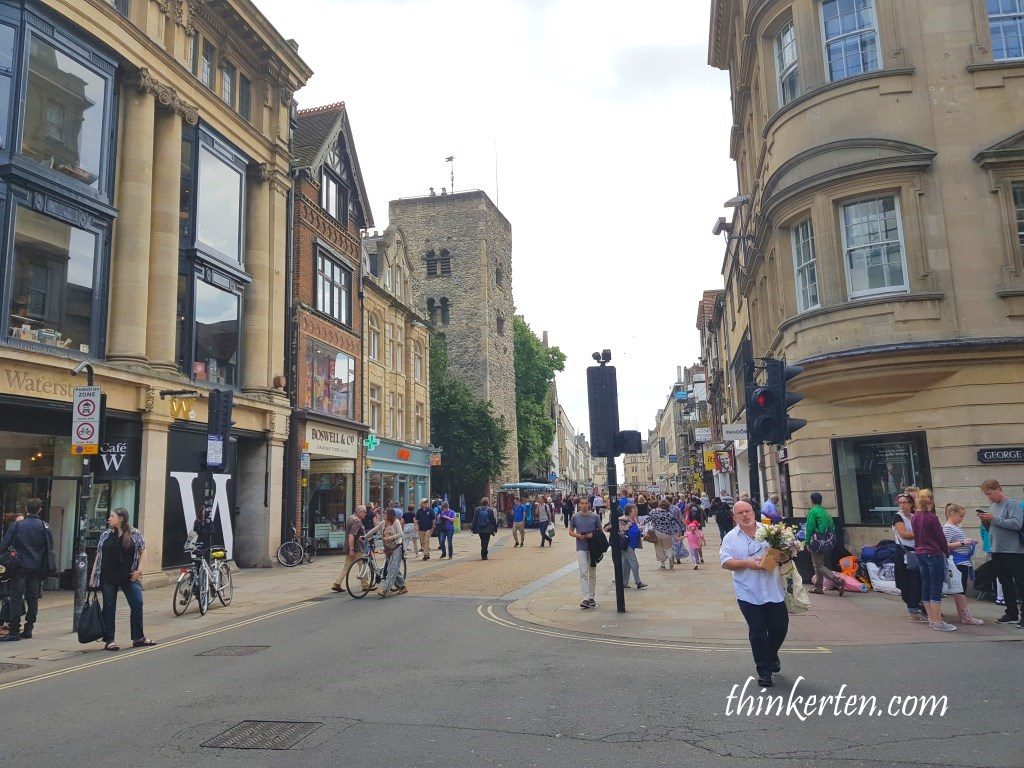 To explore around Oxford, it is always good to book a “walking tour” and walk around this old city.  Knowledgeable guide would explain to you many history background of this town.  If you are lucky enough to book a humorous guide, he will entertain you with plenty of joy and laughter.

Alternatively you may want to hop on to the Oxford City Sightseeing tour which is also another great way to explore this busy and crowded University town. 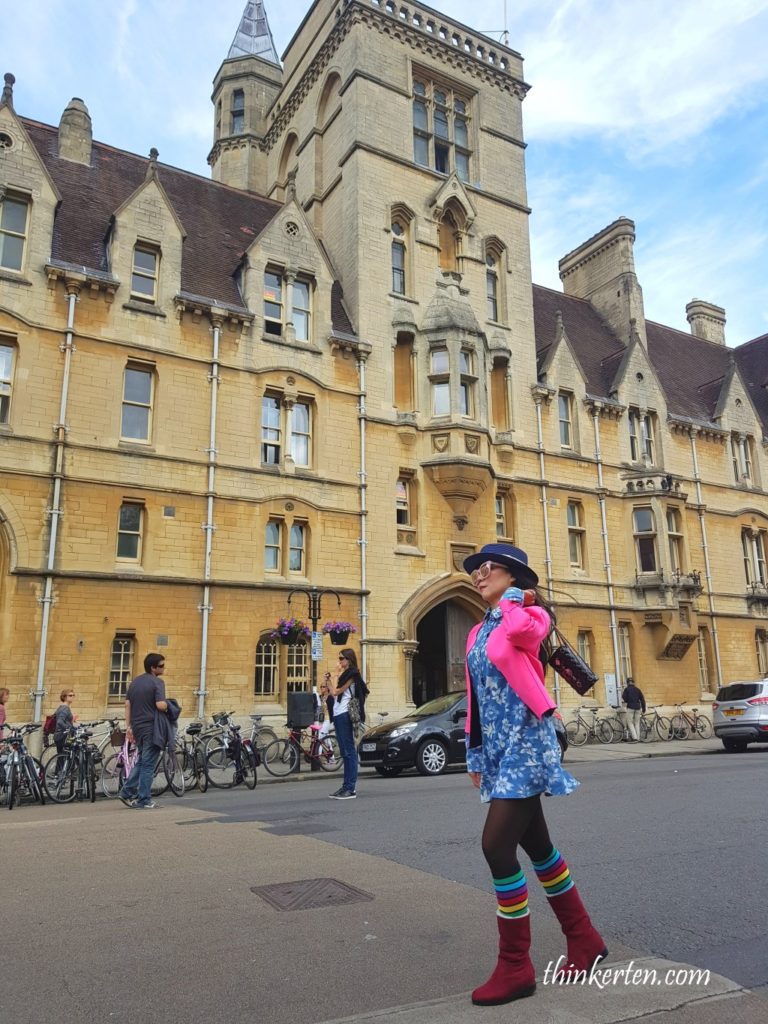 Some famous people who were graduated from Oxford are, Dr Seuss -author of many great children cartoon and story books.  “The Cat in the Hat” is children all time favorite with interesting cartoons.  Recent smart people are Australian Born Rupert Murdoch from News Corp, Bill Clinton US ex-President and his daughter Chelsea Clinton.  And yes, don’t under estimate “Mr Bean”, he also did his master degree here.  People who act dumb normally are the smartest because acting dumb and funny is not an easy job.

In total there are 38 colleges in Oxford University, slightly more than Cambridge University 31.  It is nice to have a look around at some of the colleges, very old architecture building and beautiful campus. 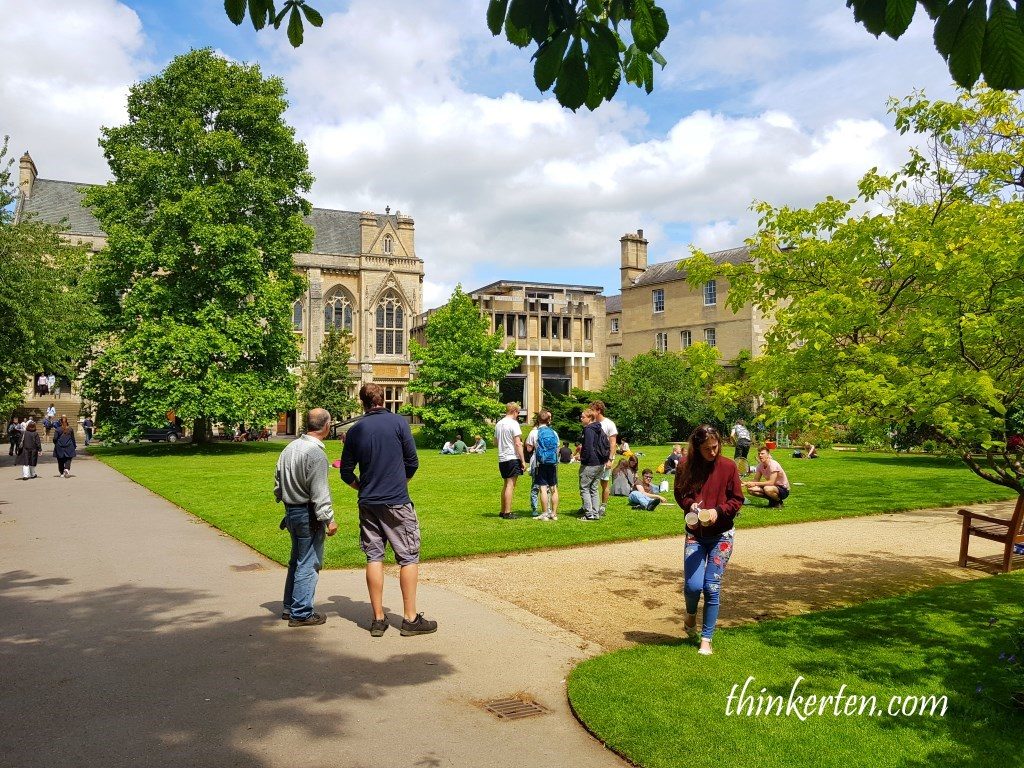 You will see Oxford students have their lunch at the lawn under the sun, a way to de-stress.

Women weren’t admitted to Oxford University until 1878 and became co-education officially in 1974. 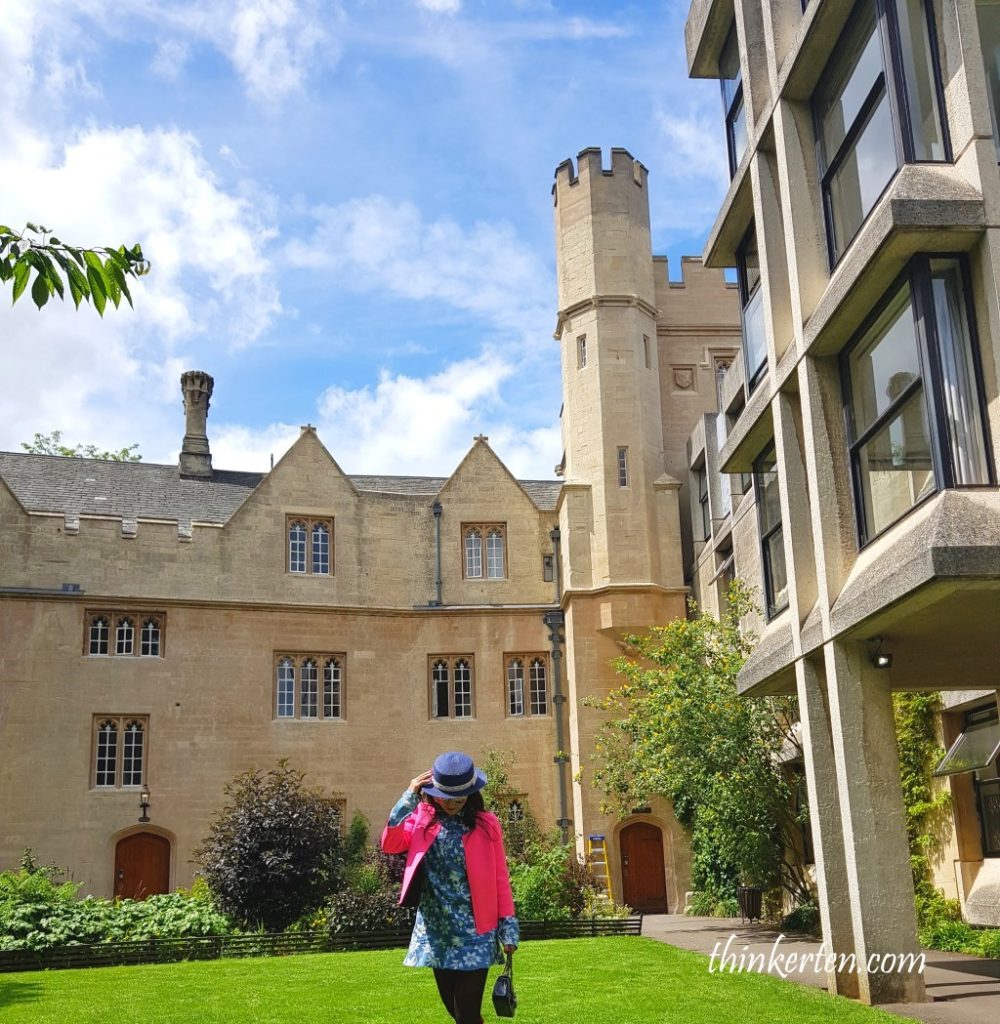 If you asked me what are the difference between Cambridge and Oxford University, I could only notice the number of tourist in Oxford is lesser as compared to Cambridge.  I prefer Cambridge but it has too many obstructions from the excited tourists, especially the punting activities in the Cam River. 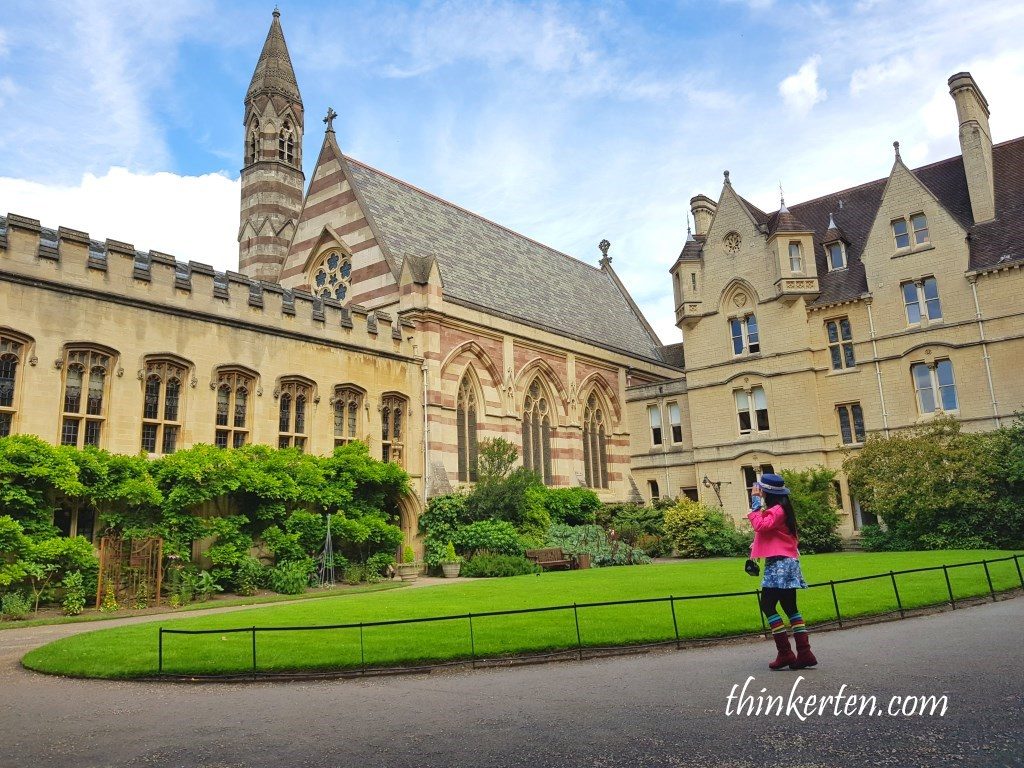 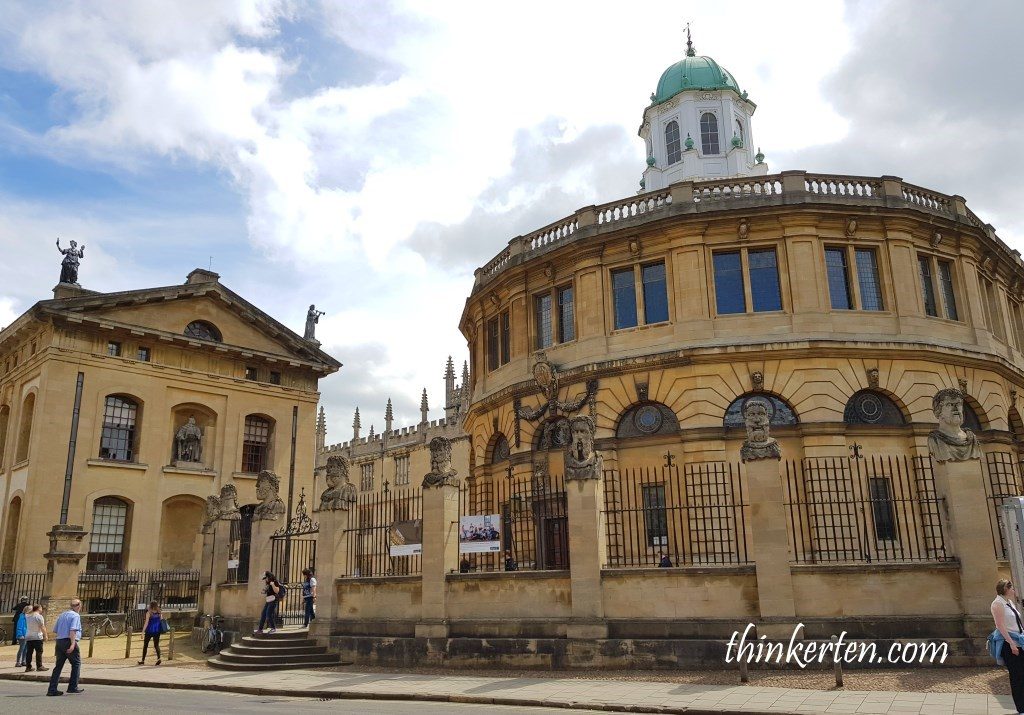 The Bodleian Library is the main research library of the University of Oxford, and is one of the oldest libraries in Europe. 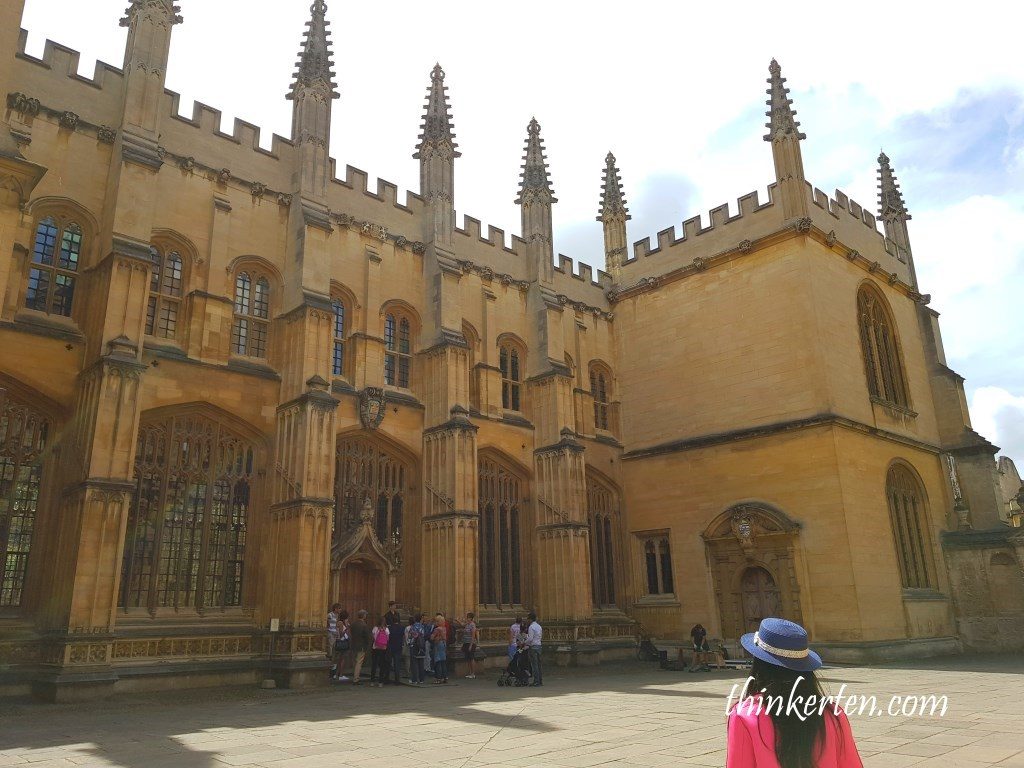 The Bodleian has been the backdrop for many movies and television shows, one of them are Harry Potter. 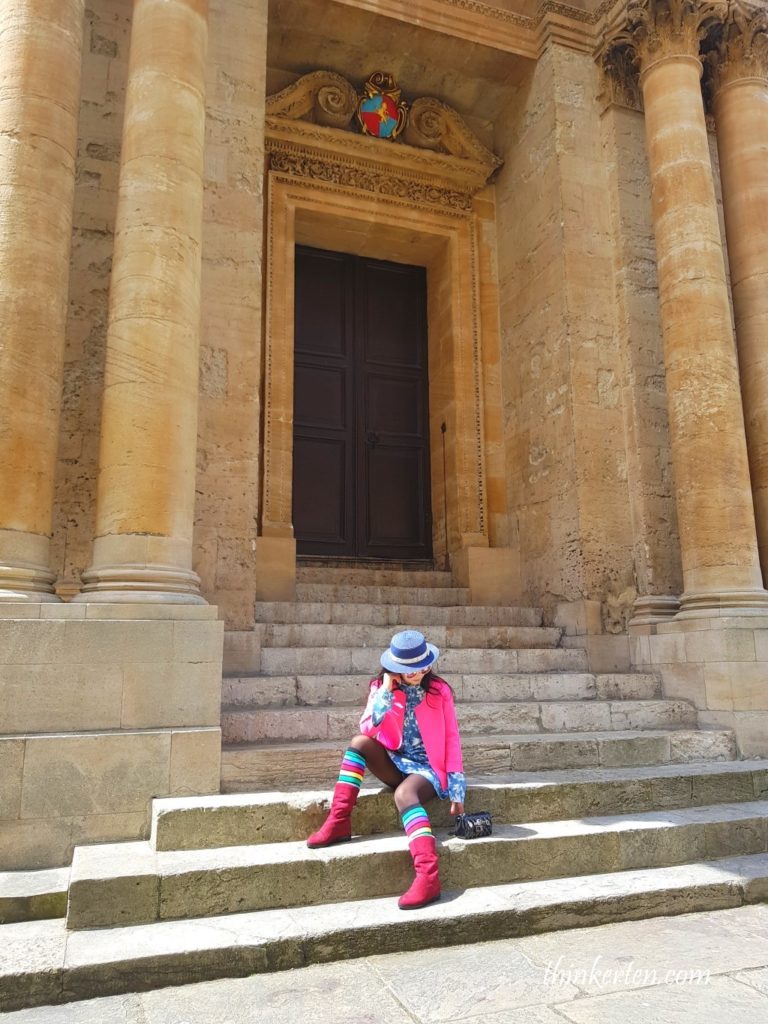 Books lovers need to come here to visit one of the largest library in the world. You get to see the oldest book displayed in this ancient library.

The Bridge of Sighs look small and may not be so clear in the below picture.  It is one of the landmark in Oxford.  No trip is complete without visiting the Bridge of  Sighs.  Is a beautiful link within two buildings. 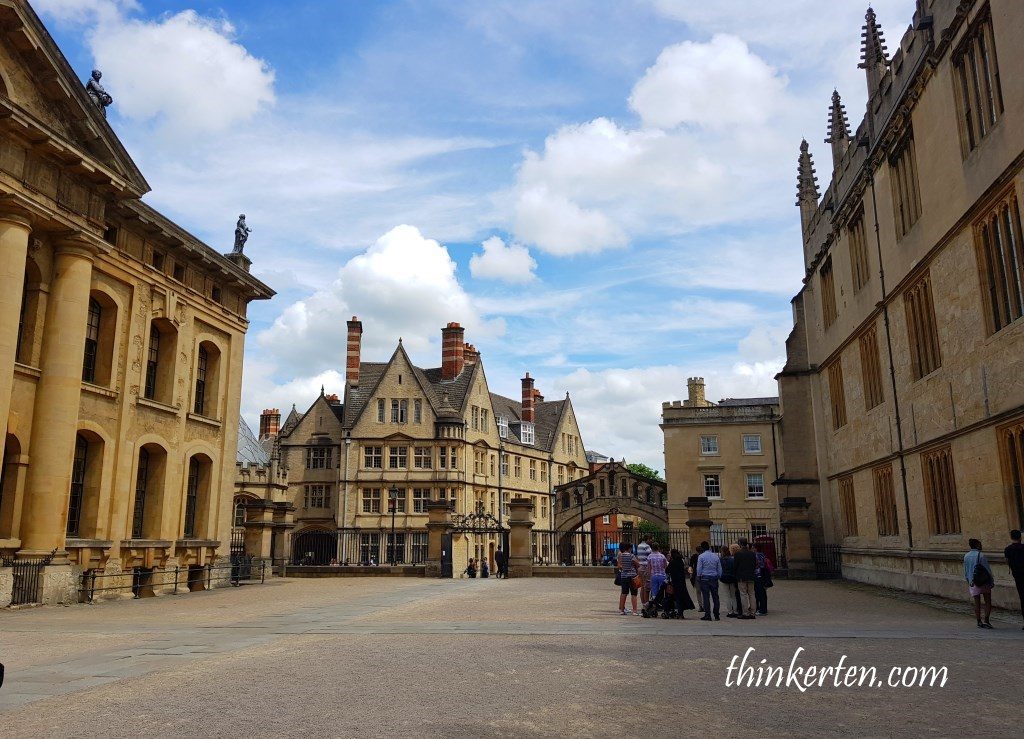 Cafes and restaurants in Oxford 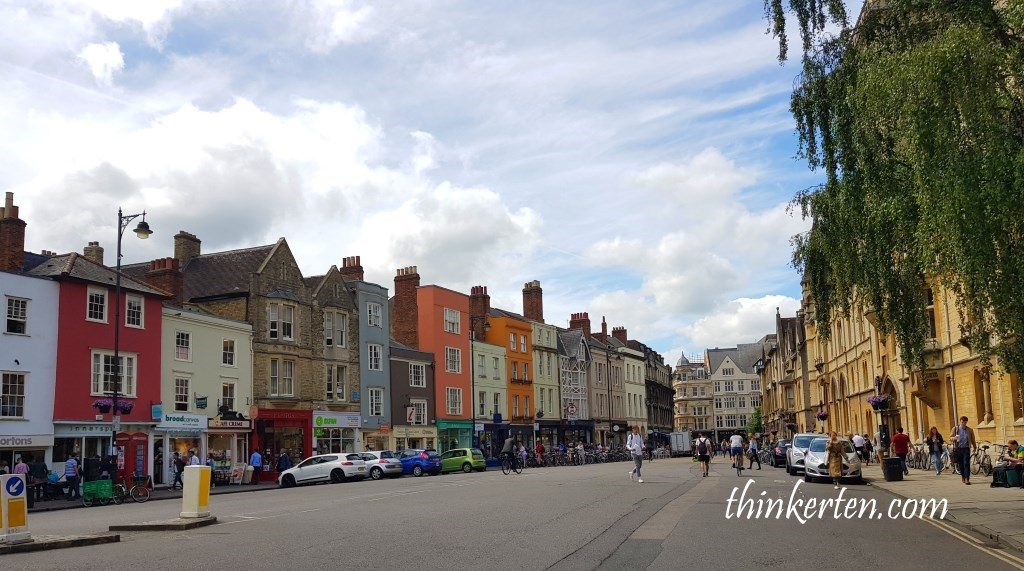 The Tower is all that remains of the 13th century St Martin’s Church, located in the city center. 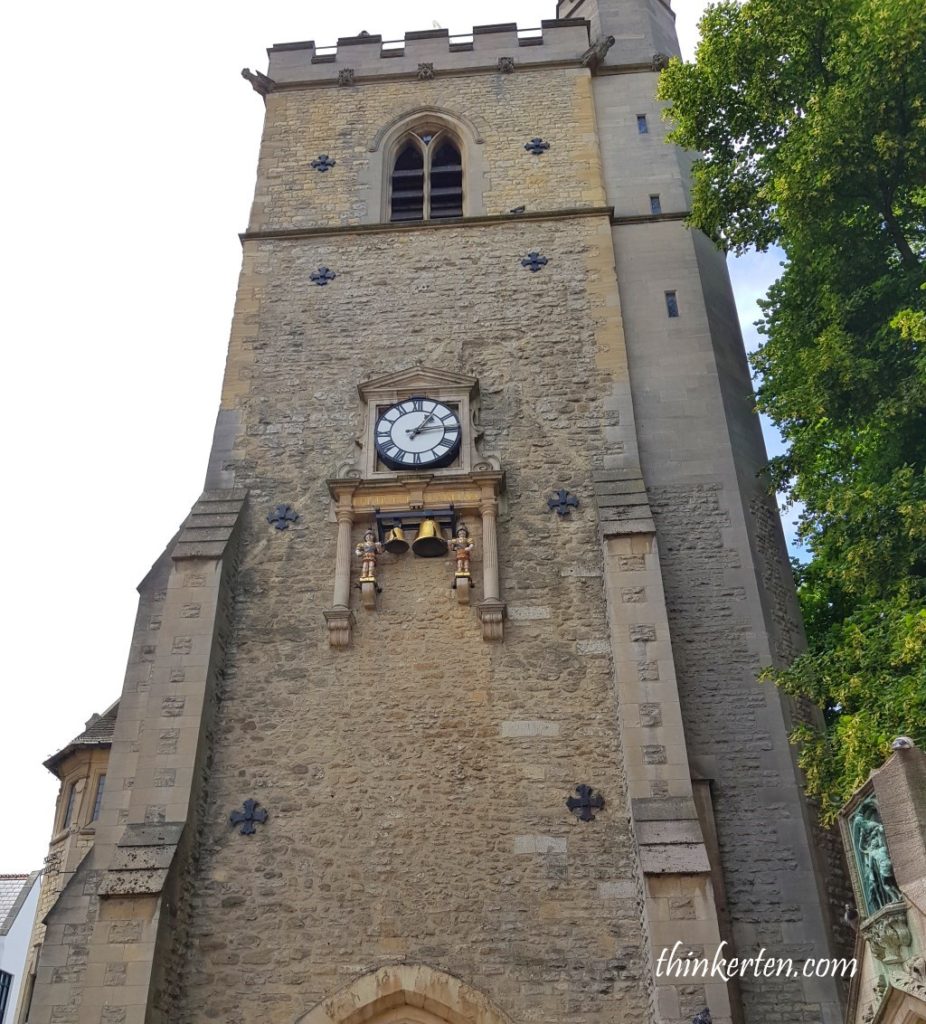 Small church in Oxford, not sure about the name. 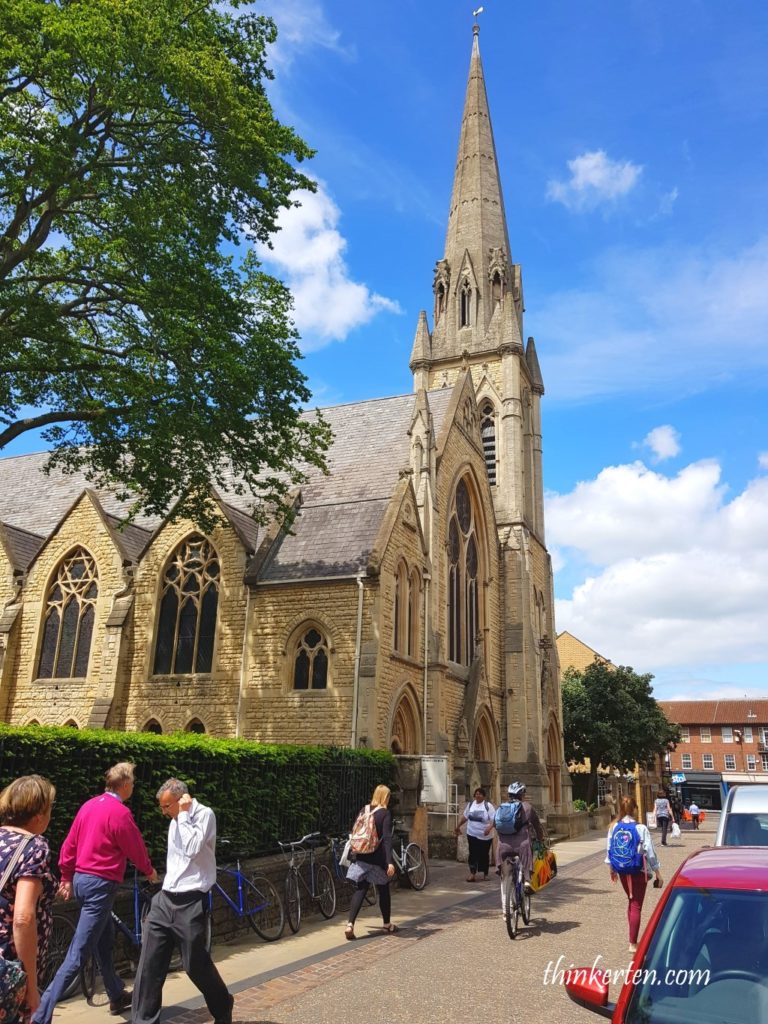 Having Thai cuisine in Oxford : Thaikun 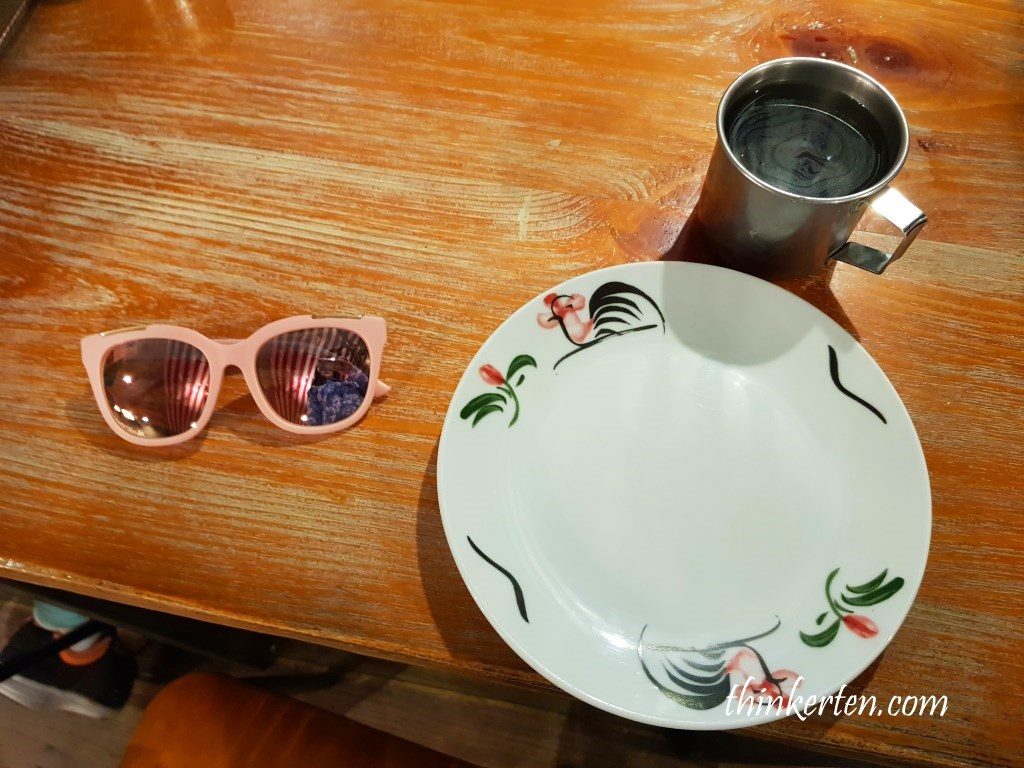 The setting here looks pretty interesting.  I like the plastic cloche which has a nostalgic feeling. 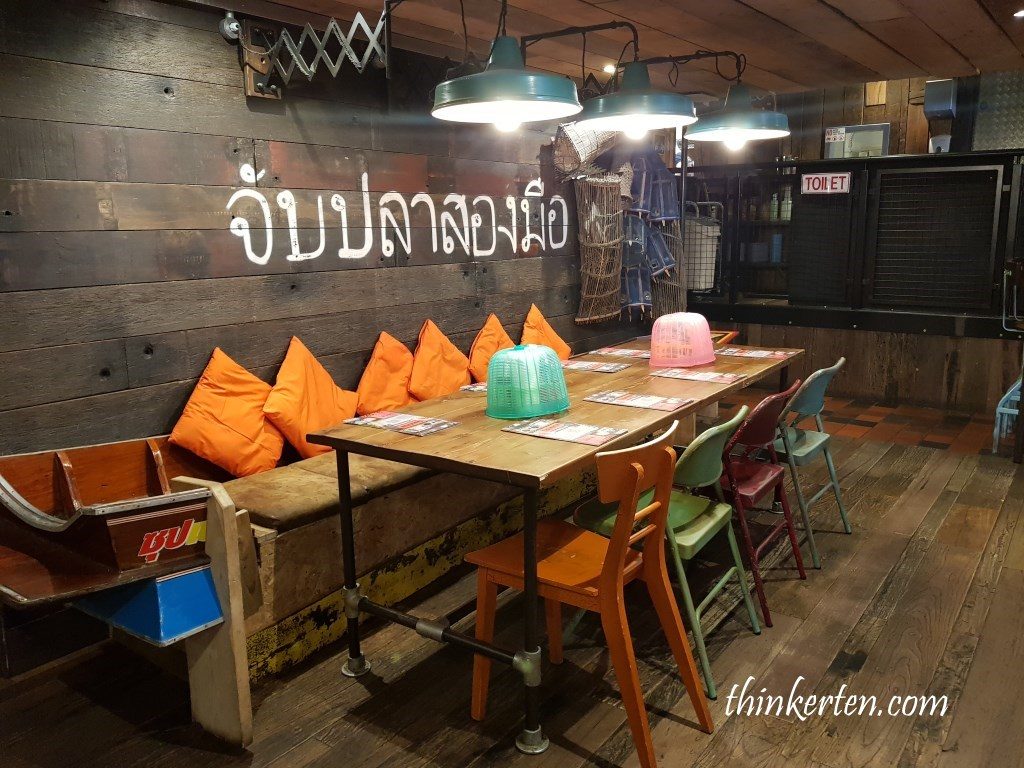 Ordered a beef and a chicken, both are signature of Thaikun.  Very delicious.

Where do you park in Oxford? 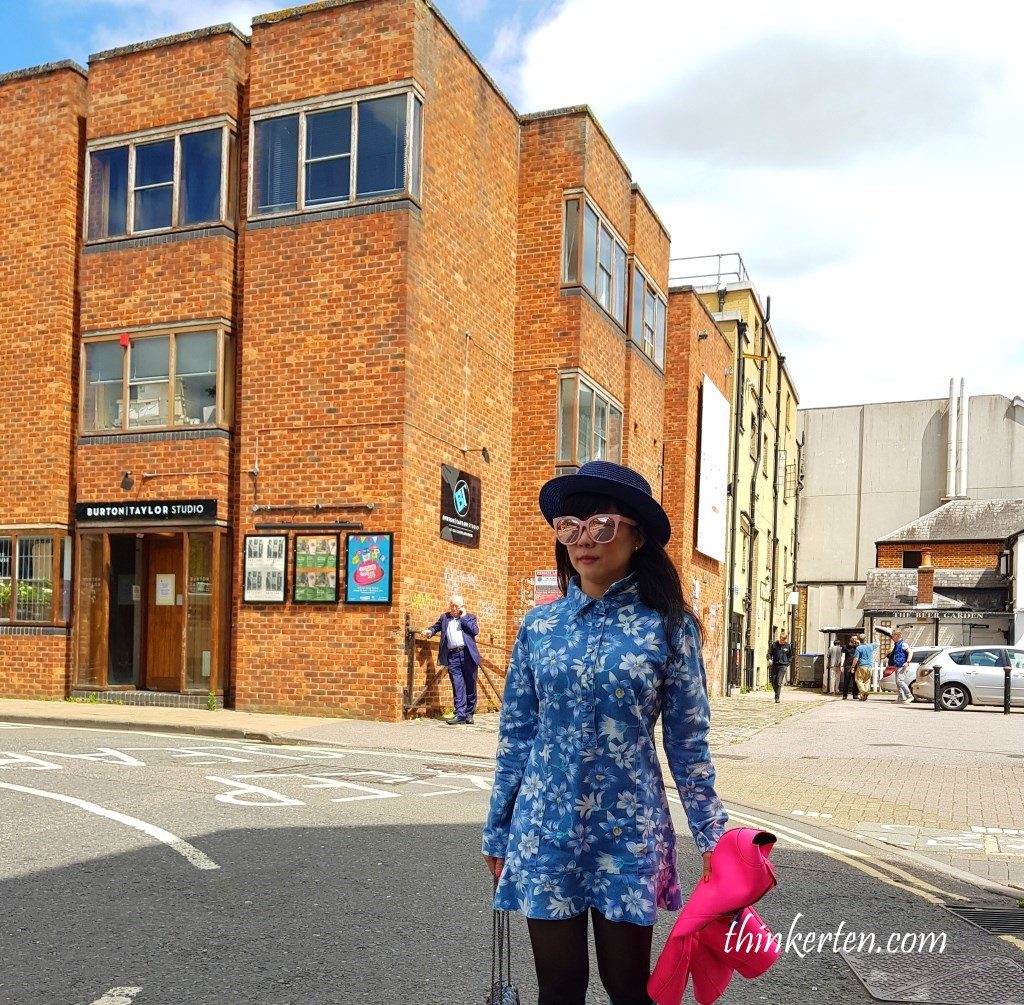 A day in Oxford University Town

Getting fit in Singapore Chinese Garden