“Millennium Impression of the Silk Road”

When you explore Urumqi International Grand Bazaar, after you have done all the shopping; one of the thing you should not missed is the cultural show located nearby a theatre. It is also the largest scale of singing and dancing performance in Urumqi. It can accommodate up to thousand people at one time. Ticket sold at RMB 299 (SGD 60 – USD$50) including buffet. 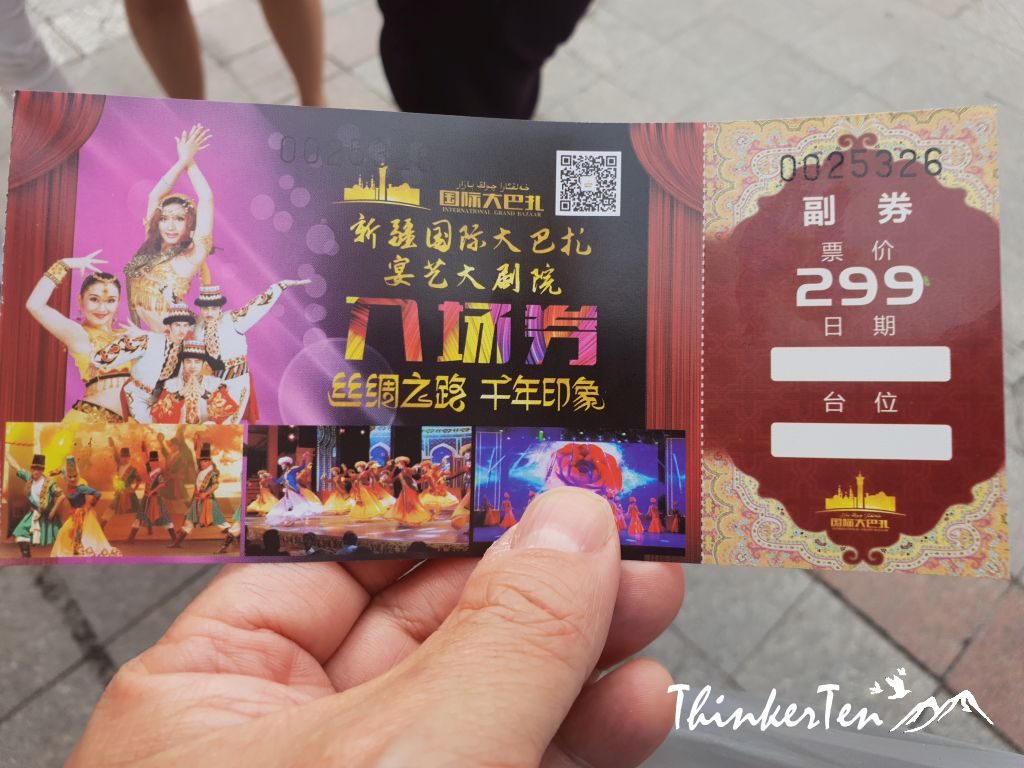 When we entered the Grand Theatre, there are already young Uyghur guys and girls to great us with their colorful dance costume. They certainly make us feel very welcome with warmest smiles.  At the corridor, you also see Uyghur guys play with their traditional music instrument. Dutar, the long neck instrument (facing us), Ghijak ( like erhu) and Dafli (look like tambourine).  All these music instrument can be found in International Grand Bazaar. 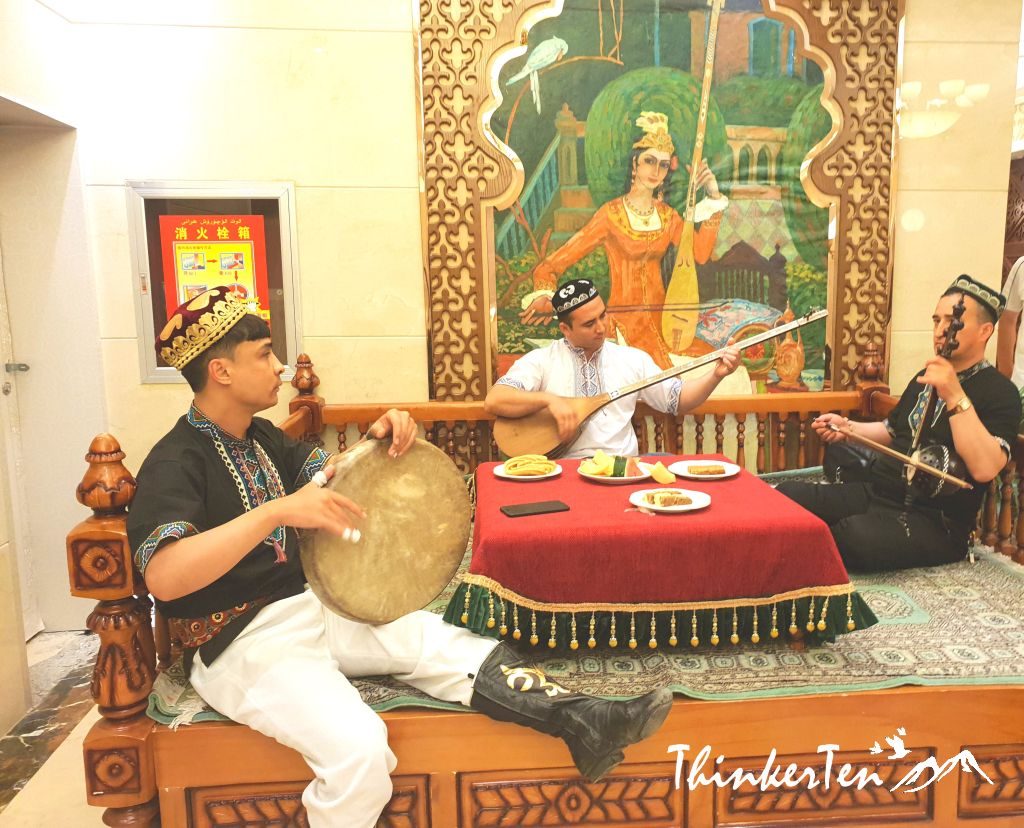 There are long tables setting with white cloth await us when we entered the hall. There already hundred of people seated and started to have their dinner. The food served at one corner and you have to go pick up all the thing you like. Variety of choice and food are abundance, so don’t worry. The staff do refill very often. All the Xinjiang speciality can be found here at the buffet smorgasbord, such as rice intestines 米肠子, roasted whole lamb 烤全羊, kebab 烤羊肉串, pilaf 抓饭 and the sour yogurt drinks. There are also free flow of drinks but you need to pick it from the bar counter.

The performance starts at around 8 pm and once the show start, the lights in the theater is dimmed. You can still eat but usually people stop eating and start focusing at the colorful performance.  It would be too busy to eat and watch the show at the same time. Hence it is advice to go early to eat then stop eating when the show start.

First the Ugyhur MC started to greet us with his perfect Chinese which surprise most of us. Well, they are national of China so speaking Chinese should not be something unusual. However it is still very interesting to see these Middle Eastern looking Uyghurs speak in fluent Chinese.

Music & Dance is their everyday life

The cabaret performance are really lively and all were from the local Uyghurs. They have sharp features and all look very pretty. Some of the guys are a little old and fat but still able to dance very well. Uyghur people have been known for their vibrant music and ethnic dances since ancient times. They can’t live without music and the dance and music occupy a significant place in their life. 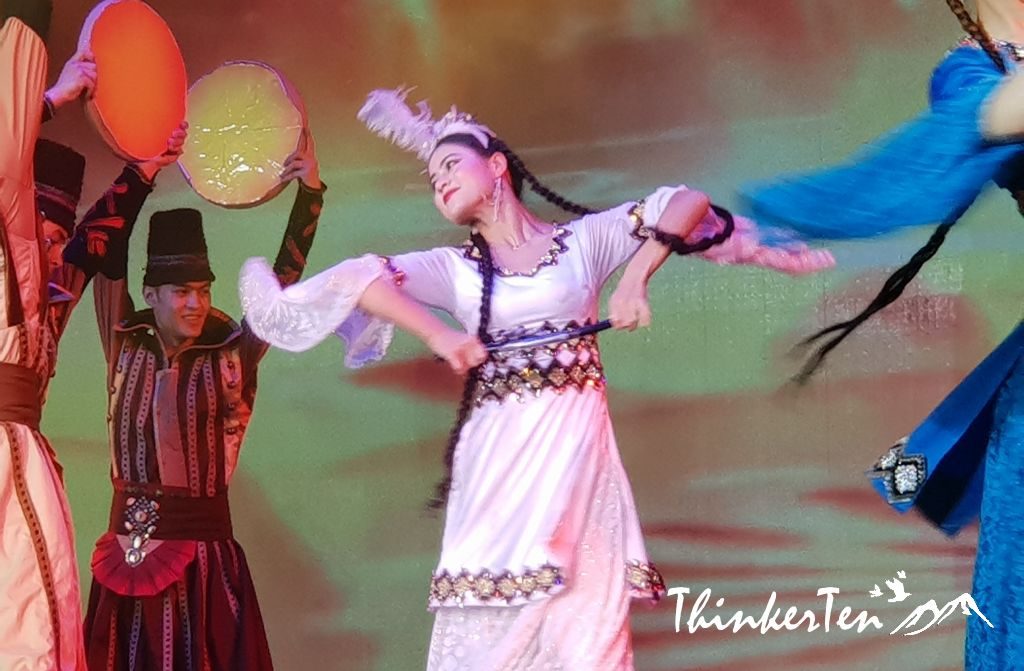 After watching the dance performance for some time, you will notice the Uyghur folk dances are distinguished by head and wrist movements. They use a lot of head and wrist and combined thrust chest and erect waist.

The dance usually is dominated by women, with lot of wrist and finger movement but without face expression. Most of the dance are done with half-closed eyes. Men usually are the one that play the music instrument like the tambourine. Men dance movement is quite cute, they use a lot of shoulders to create the trusted chest move.

One of the iconic Uyghur song in Chinese : The girl from Dabancheng/达坂城的姑娘

Another signature is the fast turn which emphasize speed and followed by an abrupt stop. Glad that they won’t get dizzy after the turn. Must have been practise for years to achieve that. 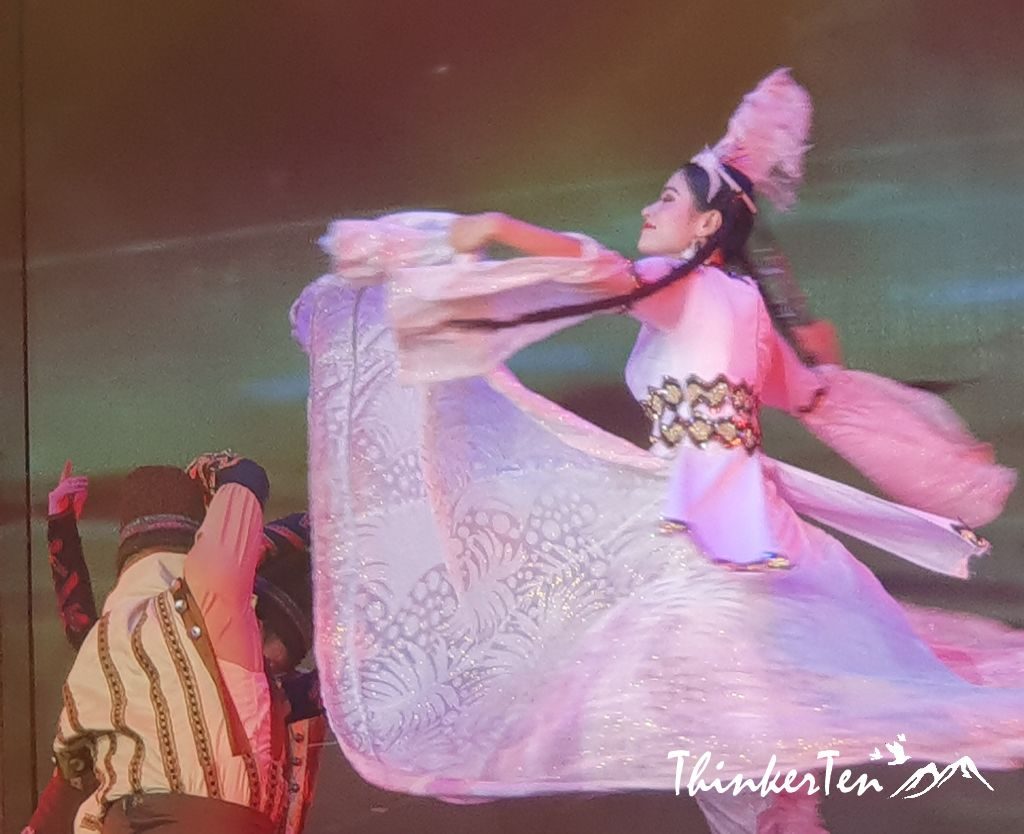 Uyghur women and their long braids

Uyghur fashion are really colorful, not just in the performance but also in their daily life. They have long plaited hair. Married women wore two plaits and younger girls wore a number of plaits!!

The dancer with a real snake on stage. 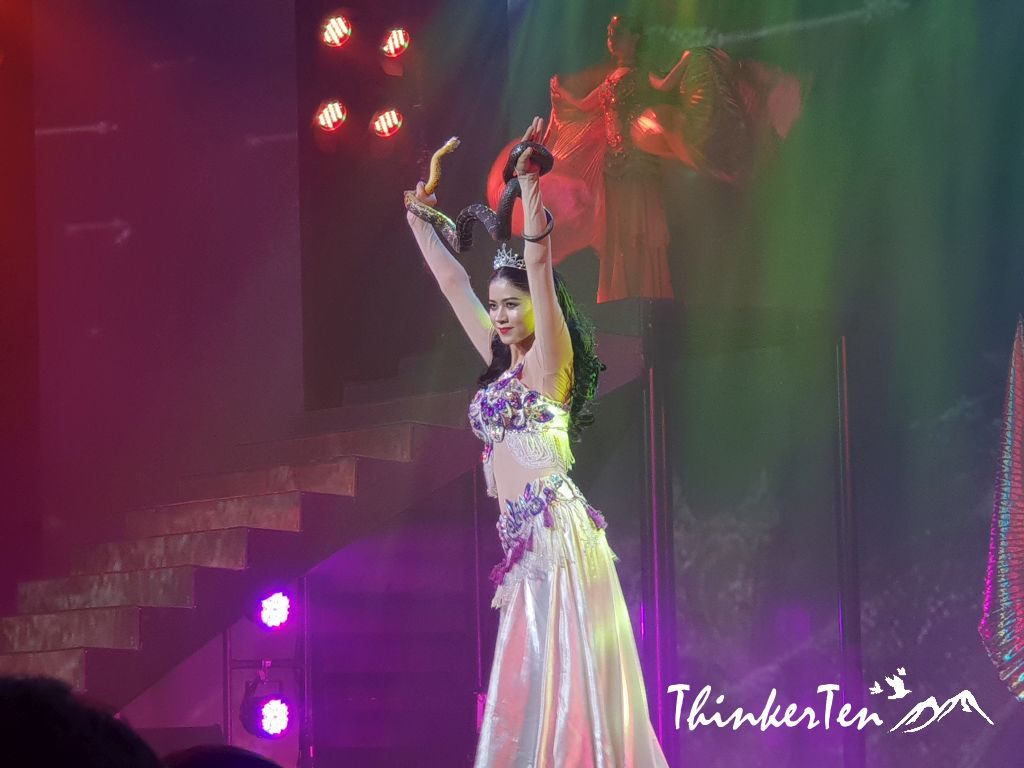 The dancer then bring down the snake and hand over to the audience.   I was shock that many of the audiences aren’t afraid of the real snake. I would faint to hold it. 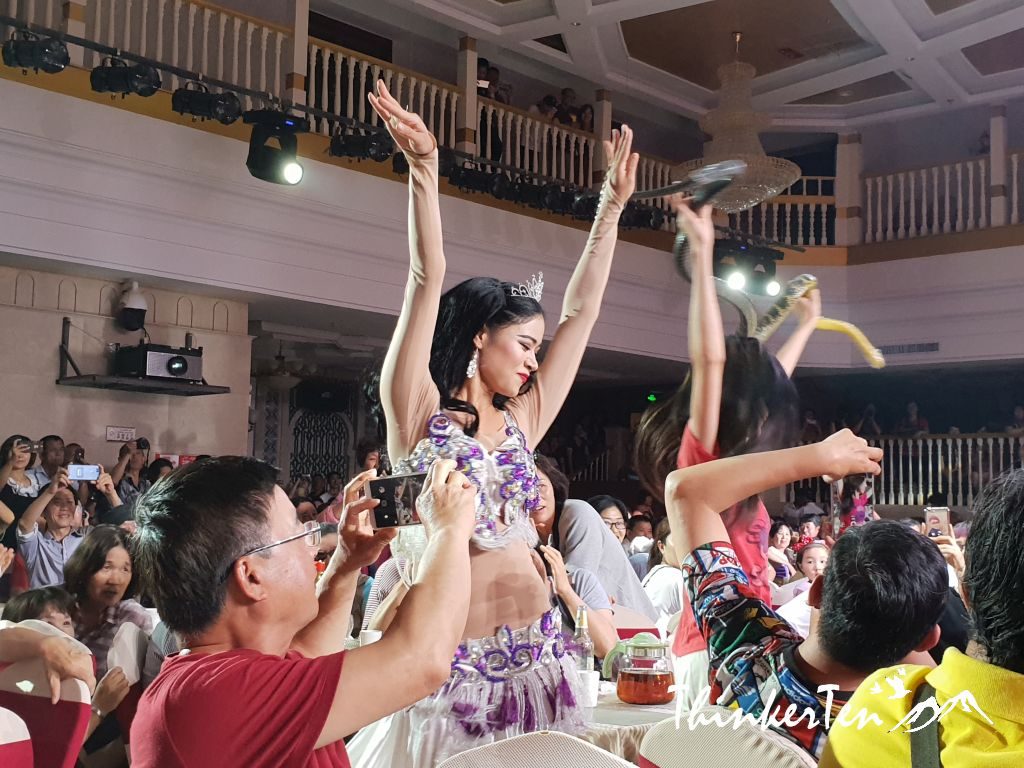 It was said that “Millennium Impression of the Silk Road” is a new visual feast produced by the Xinjiang International Grand Bazaar which cost 4 million RMB and took a year to set up the most powerful local art creation team in Xinjiang. The story of the show is based on the Xinjiang desert culture, grassland culture and plateau culture with elements of Xinjiang traditional folk songs, dance and music incorporated through modern art & multimedia image on stage. 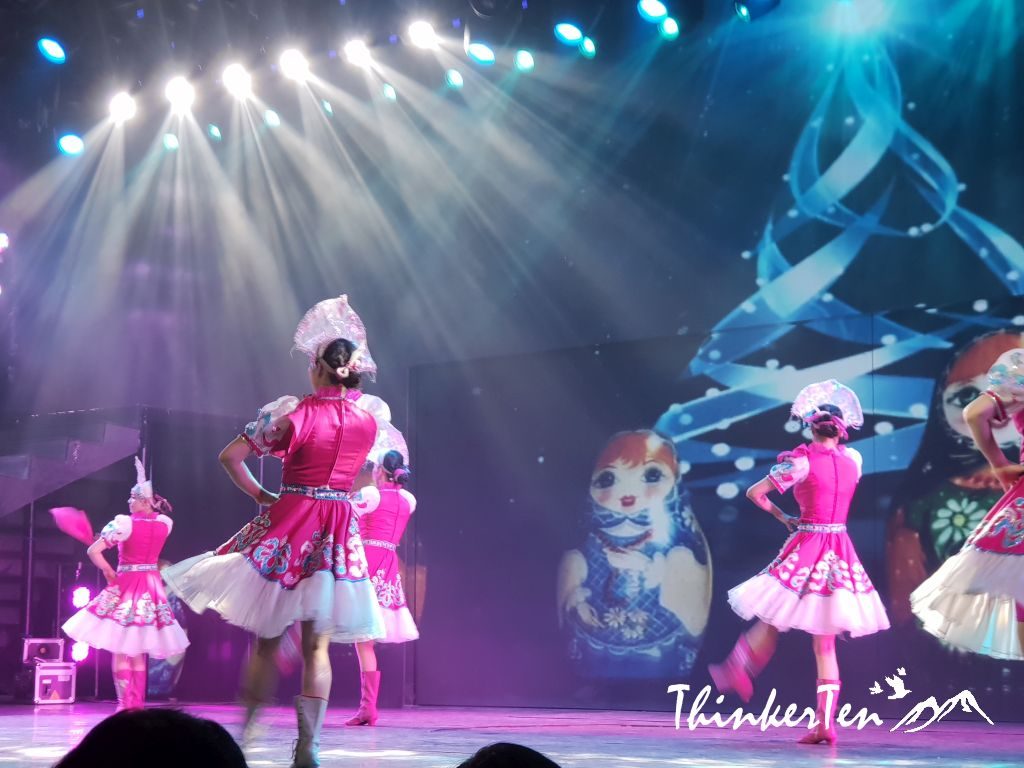 3 Parts in the performance

There are three major parts in this performance. The first act is about the “Loulan” girl and “Sun Dance” which expresses the feelings of sun worshiping. The second act is about “Silk Road” which show colorful & various ethnic groups on the Silk Road. Hence you see Kazakh & Tajik & Uzbek dance in the second act. The third act is about “Oasis Paradise” shows a harmonious Xinjiang with fertile soil, more men perform in the third act.

Lastly, the most happy moment is when audience get invited up to the stage to dance with the dancer. 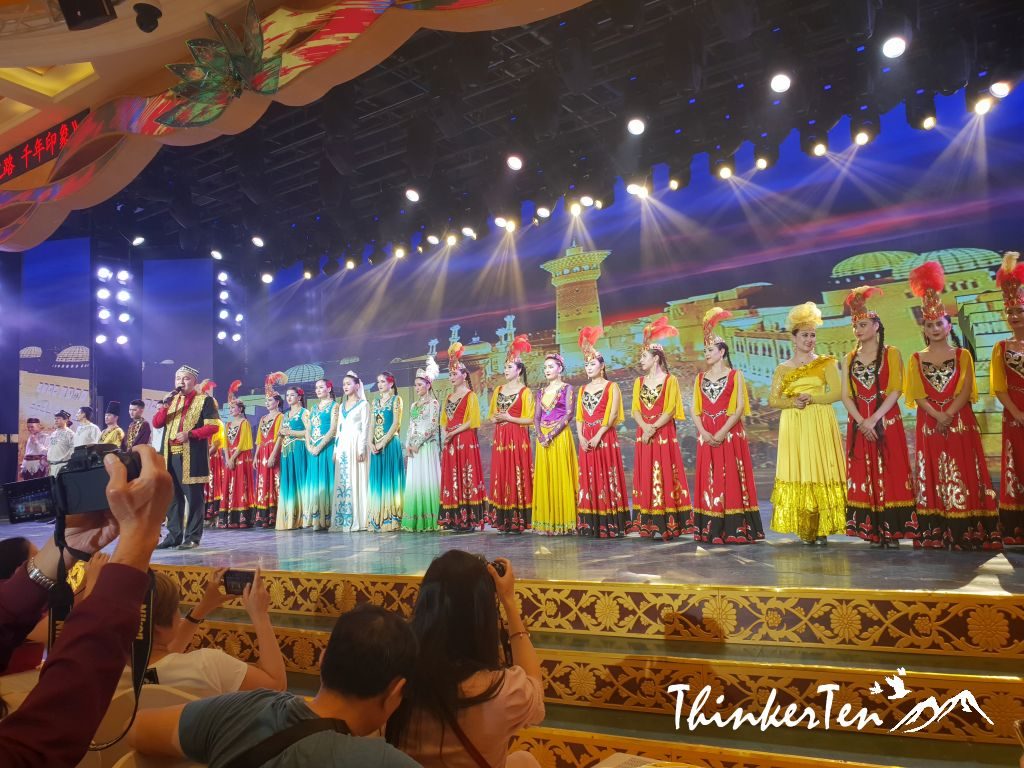 They r so good. Why do you write so good. I really love your work.

Wow – this looks and sounds like a fantastic experience! Love the colours in their outfits. Thanks for sharing!

The chapan and doppa are two symbolic outfit for the Uyghur man. Chapan is a long coat that is worn over the clothes during the winter and typically worn by men in different colors with intricate pattern emboridered on it. There is no button but a large cloth band around the waist.

The doppa is a square skullcap that is worn. The cap itself is usually black or white but sometimes you also see with different color. (even green, Han Chinese don’t wear Green hat but Uyghur guy don’t bother as they are muslim. “wearing a green hat” (戴绿帽子 )is an expression that Chinese use when a woman cheats on her husband. But it doesn’t apply for the Uyghur culture.

While women has more vibrant color and long sleeved dresses with embroidery decorative image include vines, pomegranates, moons and geometric patterns. Gold, red and black are the popular combination. Women also love with touch up with lots of jewellery, eg large earrings, bracelets and necklaces.

It certainly looks like a spectacular show. I love all of those colourful costumes.

Dear Sabina,
The traditioanl dress of the Uyghur people has strong realtion with both their history as traders along the Silk Road and the belief in Islam. Uyghur daily dresses can be very colorful too even when it is not on the stages.

This looks like so much fun! I didn’t go to a show like this while in China but I did go to an acrobatic show in Beijing and it was fabulous.

Dear Sydney,
Yes, you are right the China acrobatic show is just amazing. I watched “Chimelong International Circus” in Guangzhou and it is just jaw dropping performance. One of the best I have ever seen so far. The show include talents from around the world. Glad you watched the acrobatic show in China, may be I should do it also when I explore Beijing again in the future.

This looks like such a fun and educational evening! I love being exposed to history and culture so different from my own.

Wow this is so interesting. I would really enjoy experieincing a show like this. I enjoyed all of your photos. The costumes are so vibrant and beautiful. Thank you for sharing about your experience.

What a fantastic experience you had! This really does look like such a spectacular show. I love attending cultural shows.

It looks like a wonderful performance, especially with all those unique dances that you probably only find in this part of the world. It’s goof to know to come early so that you can enjoy dinner and then watch the show on a full stomach.

I have heard amazing things about this cultural show. The performance looks amazing. I hope to visit one day.

That must have been an incredible experience. The performers all did such a great job!

These performance in Urumqi Grand Bazaar Xinjiang China are all well-trained. Uyghur dances demonstrate diligence, bravery, openness and optimism. Uyghur folk dances are distinguished by head and wrist movements all can be spotted on stage. What a great job indeed.

What a fun and great experienc you had. I never tried watching a cultural show like this. It was really awesome show.

looks like a really fun show and experience! the costumes are amazing, I love the flair and colors!

This looks like it will be a feast for the eyes, ears and heart for both young and old. I love going to watch shows that a sensory treat like this.

You are right, this show is good for both adults and kids. Everyone will enjoy the cultural elements in this show.

Omg!!! What a fun show! Definitely something I could see myself attending

This sounds like such an amazing experience I would love to visit there.

This show sounds and looks fantastic! Such a perfect combination of ancient traditions with modern technology!

Dear Nati,
The show has integrated the pattern of human knowledge, belief and behavior into their dance and songs. This is the must see perfomance to complete your cultural experience in Xinjiang.

This looks like an amazing experience! The costumes are amazing, I love the flair and colors!