Journey to Turpan – Urumqi via Dabancheng

From our journey from Turpan to Urumqi, we passed by Dabancheng. This little town is famous for one of it folk songs called – “The girl from Dabancheng”/达坂城的姑娘.   This is  a Uyghur song which was sang for more than 70 years.  Originally it was in Uyghur language but later the Chinese famous song writer Wang Luobin/王洛宾 created his version.

Wang Luobin version was created for the people who were in Army /文工团, to sing such lyric during that era is to boost people’s morale. Life back in 70 years ago was not as interesting as today, no tv, no tablets and no entertainment. So Wang Luobin included, pretty girl, big eyes, marrying me in his song lyric.

There were groups of army troop working on the railraod in Xinjiang back then, railroad work can be very boring, especially in such harsh environment, surrounded only by layers of mountains and vast land of desert. It can be very frustrated to dig the railroad that is “flat and hard” => 达坂城的石路硬又平! (first line of the song).

The song lyric indicated there are beautiful girls waiting for them in Dabancheng, this acts like a motivational song  for the army workers to sing out loud while digging the railroad. Army workers would work harder and faster to reach Dabancheng to check out the girls 🙂

This video was taken during the cultural show in Urumqi Grand Bazaar.

达坂城的石路硬又平 – Dabancheng’s stone streets – hard and flat.
西瓜呀大又甜 – Watermelons big and sweet!
那里住的姑娘辫子长啊 – A girl who lives there has long braided hair
两个眼睛真漂亮 – And a pair of beautiful eyes!
你要是嫁人 不要嫁给别人 一定要嫁给我 – If you want to marry, please marry me only!
带着你的嫁妆 带着你的妹妹 赶着那马车来 – Bring along dowry and your younger sister and catch the horse carriage.

Girl from Dabancheng was sang by worldwide Chinese!

Dabancheng is a small town which only have a population of 40,000. The songwriter Wang Luobin / 王洛宾 has described the girls from Dabancheng super pretty with big eyes and long braids and the watermelon here are huge and sweet.

Many visitors have actually came to Dabancheng town to find out how pretty the girls are!  This song ‘Girl from Dabancheng’ is sang by all worldwide Chinese, especially during cultural shows at school or cultural events.

Beside the famous folk song, Dabancheng is actually an ideal place for wind farm.  We see plenty of wind turbines along the highway. Mountain ranges between Dabancheng and Urumqi created a natural wind tunnel, increasing wind speed in the valley.

Xinjiang is one of the regions in China with the richest wind power.  In fact wind power is recyclable and also effective to protect environment.  I have seen other wind farm at Palm Springs California, they look pretty much the same layout, except the wind turbines in China has printed out with their own Chinese characters in each of the wind turbine.  I was quite impressed to see such landscape in China.

This place also surrounded by Tianshan mountains.  Translated as Mountains of Heaven or the Heavenly Mountains. The highest peak in Tian Shan is at 7500 m high and the lowest is at the Turpan Depression/city oasis of Turpan which sit at 154m below sea level.  Observe closely, not a single tree grow in this area. 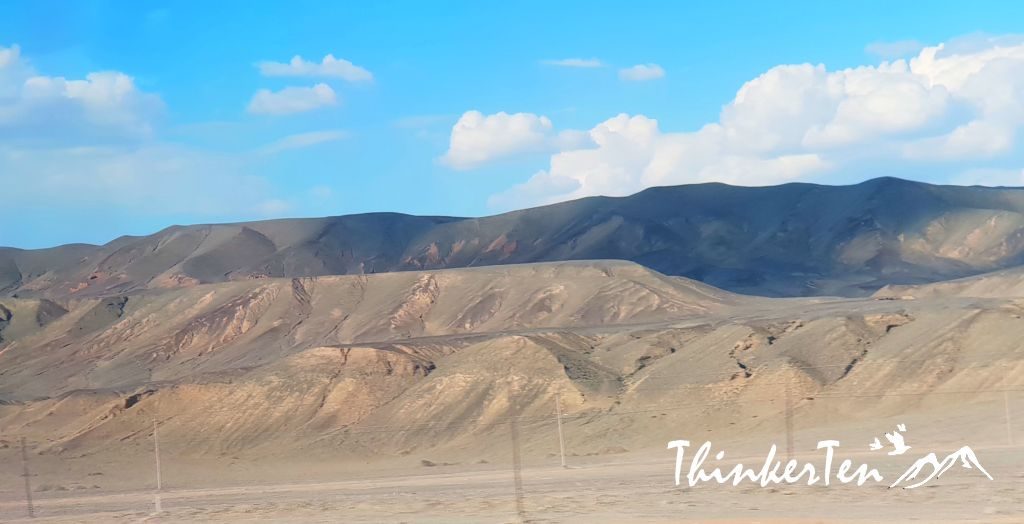 After hours on the road, we took a short break at the Dabancheng Rest area. The toilets are quite decent and beside the toilet is the police station.  We also saw few police officers walking up and down at this area.

If you look closely many of the shops here are selling the local speciality – Dabancheng broad bean 达坂城大豆 => we called it 蚕豆 in Singapore. Tianshan Mountains provide good water to grow the big bean! 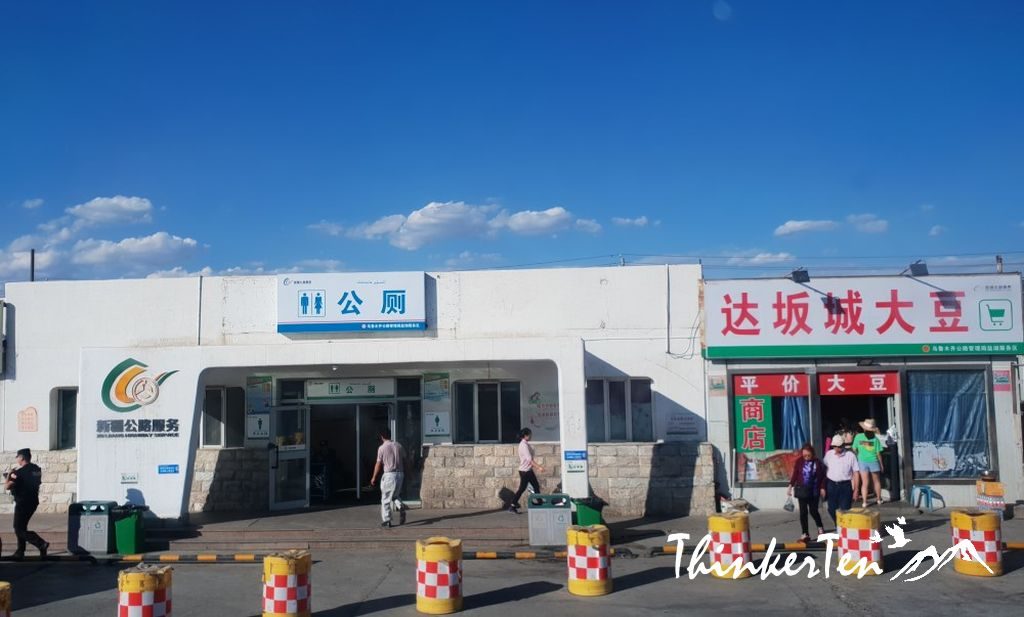 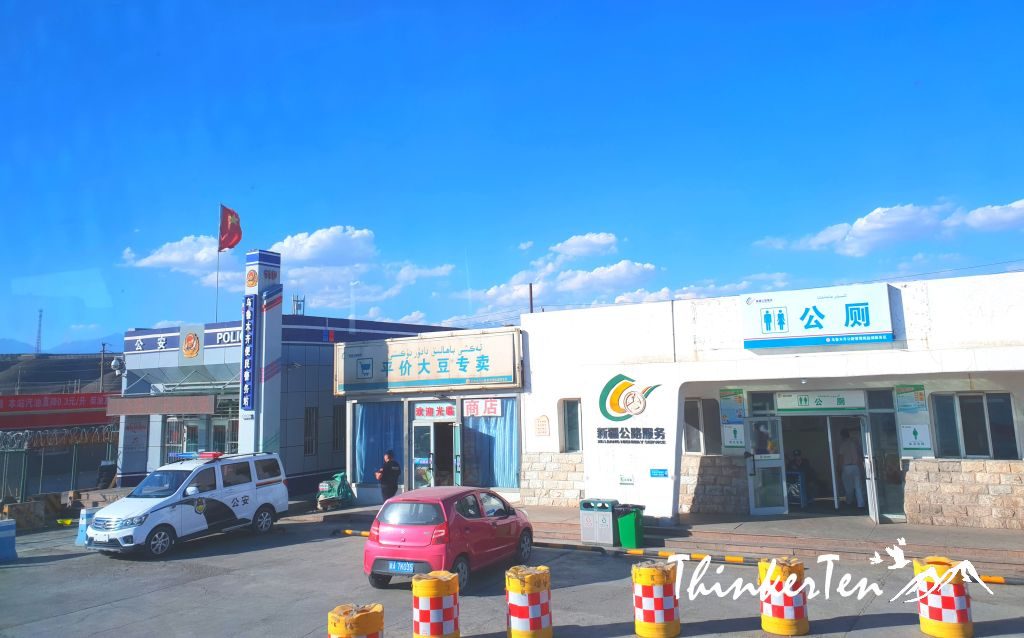 I have heard the folk song since I was a little girl, 达坂城的姑娘 – “The girl from Dabancheng”. Finally I got the chance to pass by Dabancheng.  Are the girls pretty in Dabancheng?  According to our guide, many visitors went home disappointed … ( I leave the imagination up to you 🙂 Dabancheng don’t even live any young girls!

Our Guide told us that the Chinese famous folk songwriter Wang Luobin/王洛宾 didn’t even step foot in Dabancheng at the first place.  Wang Luobin heard the original version from a Uyghur guy and he love it so much that he made his own version.

Where is the girl in Dabancheng, this has become the answer that people have been searching for many years. The beauty of the song has been deeply engraved in people’s minds for few generations. It is no longer important to find a girl who is as beautiful as imagined. Because as long as you enter Dabancheng or passing by the town, you feel the Dabancheng vibes and the song ringing in your ears.

Well, no pretty Dabancheng girls, but I am still quite impressed with the wind farm stretching from this valley, Turpan to Urumqi.  Both magical and futuristic. 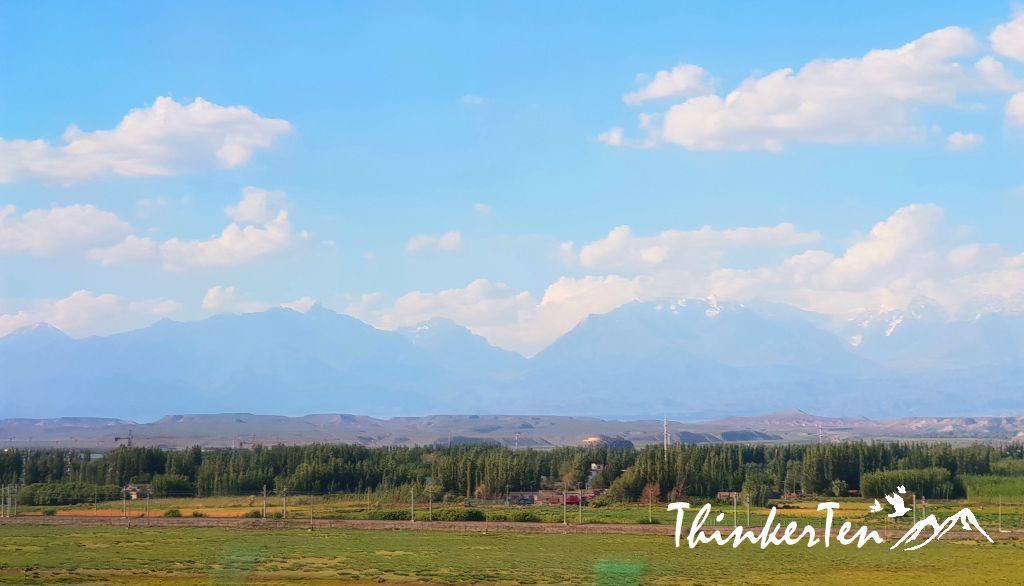 I love to see photos from other places around the world. It’s so interesting to me. Thank You for sharing.

The lands you travel seem so beautiful!

This looks like it would be such an amazing area to explore. I totally would love to travel more!

I haven’t heard of that folk song, but love learning about it from you! The rest area looks fun!

The song writer Wong Roubin took this song from the original Uyghur folk song and included phrases such as “Horse carriage”, “with your dowry”, “with your sister”, “sitting in the carriage” into the lyric. This has become a topic of discussion for many people. Wonder why you need to bring “your sister” to a marriage? Later some scholars said that the translation was wrong, it should be “with your bridesmaids”, not “sister”, but people has become used to the original lyric. After this song spread around the world, people all know there is a place called Dabancheng in Xinjiang, China.

Such and amazing trip I think windmills are so awesome giving us energy.
I would love to visit and makes
Great pictures

The windfarm that was planted in 1980s has made the whole place look like a “white forests”, stretching from Capital Urumqi and Turpan Basin. Hence Dabancheng is a landmark for wind farm industry.

This looks like such an amazing place to get to go and explore – it is amazing all these songs that get passed down as well.

Dear Sarah,
I was really glad to have discovered this on the way from Turpan to Urumqi Xinjiang China. Dabancheng town is well-known for the folk songs that was passed down by generations. The town does not really have much attraction, but Chinese tourists around the world love to find out the girls in Danbancheng, whether they are as pretty as the songs mentioned.

Great place to explore, your pictures are beautiful.

I heard a lot of interesting reviews of Dabancheng Town. It’s great you finally get to check out this town.

The small town has nothing much to see except the huge windfarm which made nice landscape together with mountain ranges for the backdrops.

That’s a fun story! I love how it motived people thought dull days. Too bad there are no beautiful women there. hehe

Haha, many people get disappointed and found no pretty women or even no women at Dabancheng city. You are right, this song worked as a morale boost for the army rail worker, motivate them to work harder so that they could reach Dabancheng city faster to check out the girls. LOL.

This looks like such a fun place to explore!

I never really thought about going to Turpan before, it looks beautiful though. May need to add it to my want to do list.

I really liked reading about the area. If I ever make it out that way I’d be super interested in wanting to see it first hand. It’s always a lot of fun reading and learning about places, even if visiting isn’t always feasible. Great post and thanks for sharing!

The number one best thing I love about Dabancheng town is I finally got to see this city with my own eyes. There are nothing much to offer in this place except the windmill farm. However I am really happy to have learn the culture and history of the song – Girl from the Dabancheng and the song writer Wangloubin – Father of Chinese Folk Music. Other popular songs are : Lift Up Your Veil/ 掀起你的盖头来 and At the Faraway Place /在那遥远的地方. Go check them out, super cute songs.

You’re so lucky to be able to explore other cultures. This area looks to have a very rich culture.

It is great way to understand and appreciate other cultures through travel. We can learn the difference and their perspective. On the other hand, it also make us realised our own root and identity more by learning about others.

It’s a shame the town didn’t live up to its reputation! Sorry for the men who went there looking for a girl! The place is so remote yet beautiful, I’d love to visit one day!

Haha, you are right. Dabancheng town is quite remote but it gotten it fame from the song which was song for more than 70 years!

It’s so cool to hear about your travels in China. I have never been there so I really appreciate all the details and photos you’ve shared. It sounds like a great trip!

I love the history of the song. I’m sure it was so effective getting the soldiers to work faster. It looks like there’s a lot to check out. The windmills are mesmorizing.

I love your pics. It looks like an amazing place to visit and have fun. I love seeing adventures from other parts of the world.

This is a great post for me because I teach ESL to kids in China with the company VIPKid.

Glad to learn that you are teaching English in China and guess you were being exposed to some of the Chinese culture. Not sure you have heard some of the famous songs from King of song’s writer Wang Luobin. Most of his songs were translated from the Uyghur, Kazakh or Mongolian folk songs. Pretty easy to sing 🙂

What an amazing place to go adventure around!

This looks like such a great place. The photos you took are incredible and I would love to explore this place.

Great story and wonderful experience! i love reading your Chinese chronicles so much!

What a lovely story and some great pictures to go alongside it too.