Fatima not a person but a pilgrimage town in Portugal. Top things you need to learn before you visit!

After entering Portugal, our first stop is Fatima, a Catholic pilgrimage site which is located about 142 km north of Lisbon.  Fatima is an important Catholic church dedicated to the Virgin Mary. In fact, this place is so famous that you see Catholic from all over the world flooding to this place. 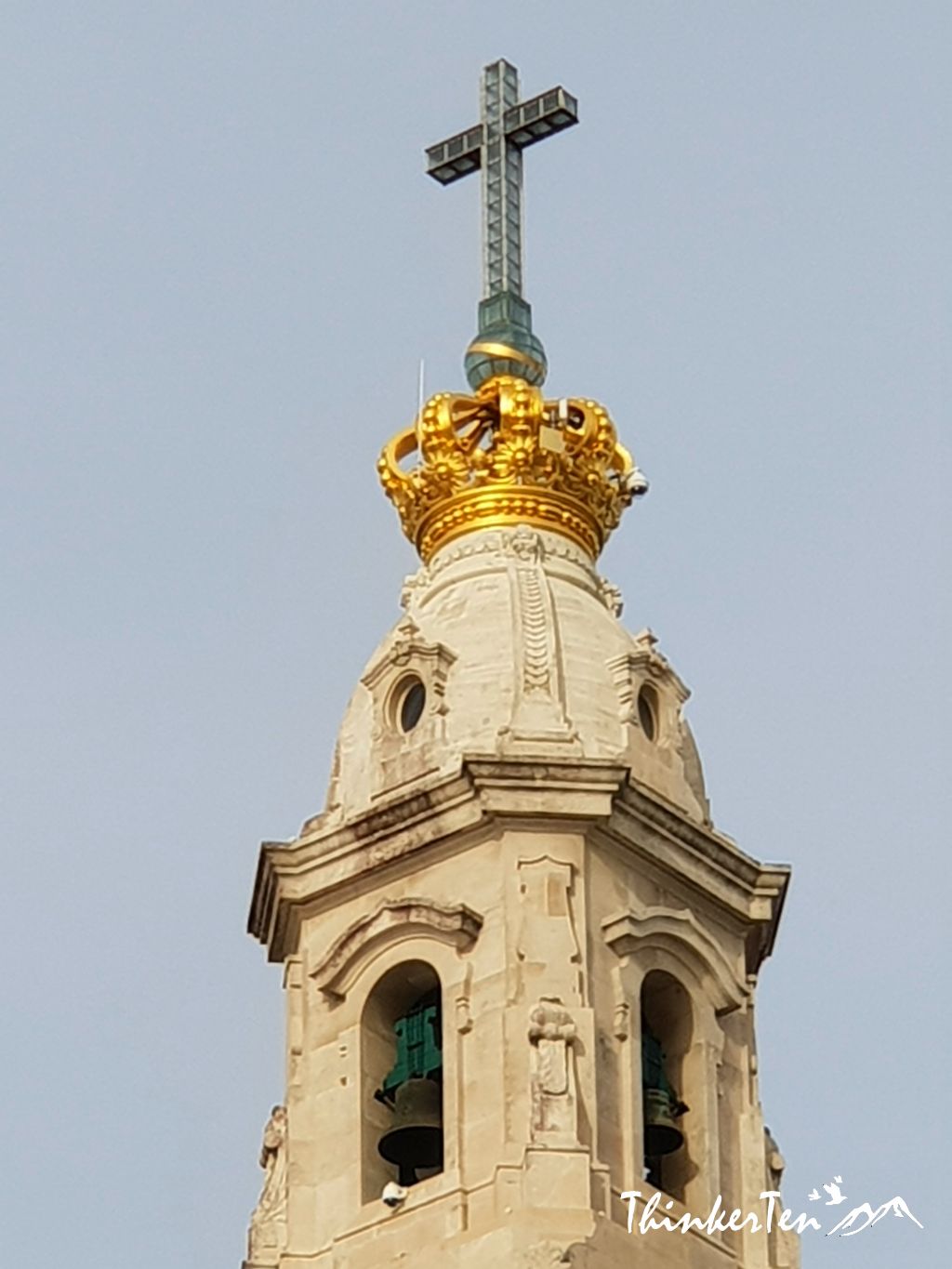 A whole family of faithful worshippers was seen crawling on their knees as a way of giving thanks for prayers answered. 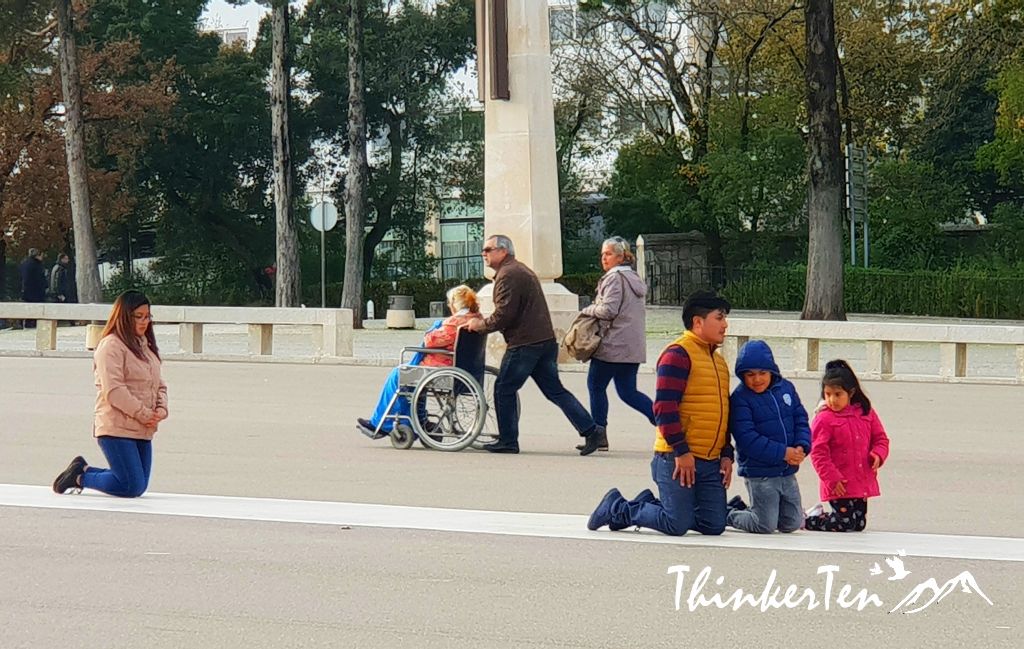 The story of a famous miracle in Fatima, Portugal, began in May 1917, when three children (ages 7, 9, and 10) claimed to have encountered the Virgin Mary on their way home from tending a flock of sheep. The three Fatima children are Lucia Santos 10, with her cousins, Jacinta 7 and Francisco Marto 9.

Jacinta and Francisco died at a young age (the two in the picture below) but Lucia, the longest-living visionary nun, passed away only in 2005 at the age of 98 years old. 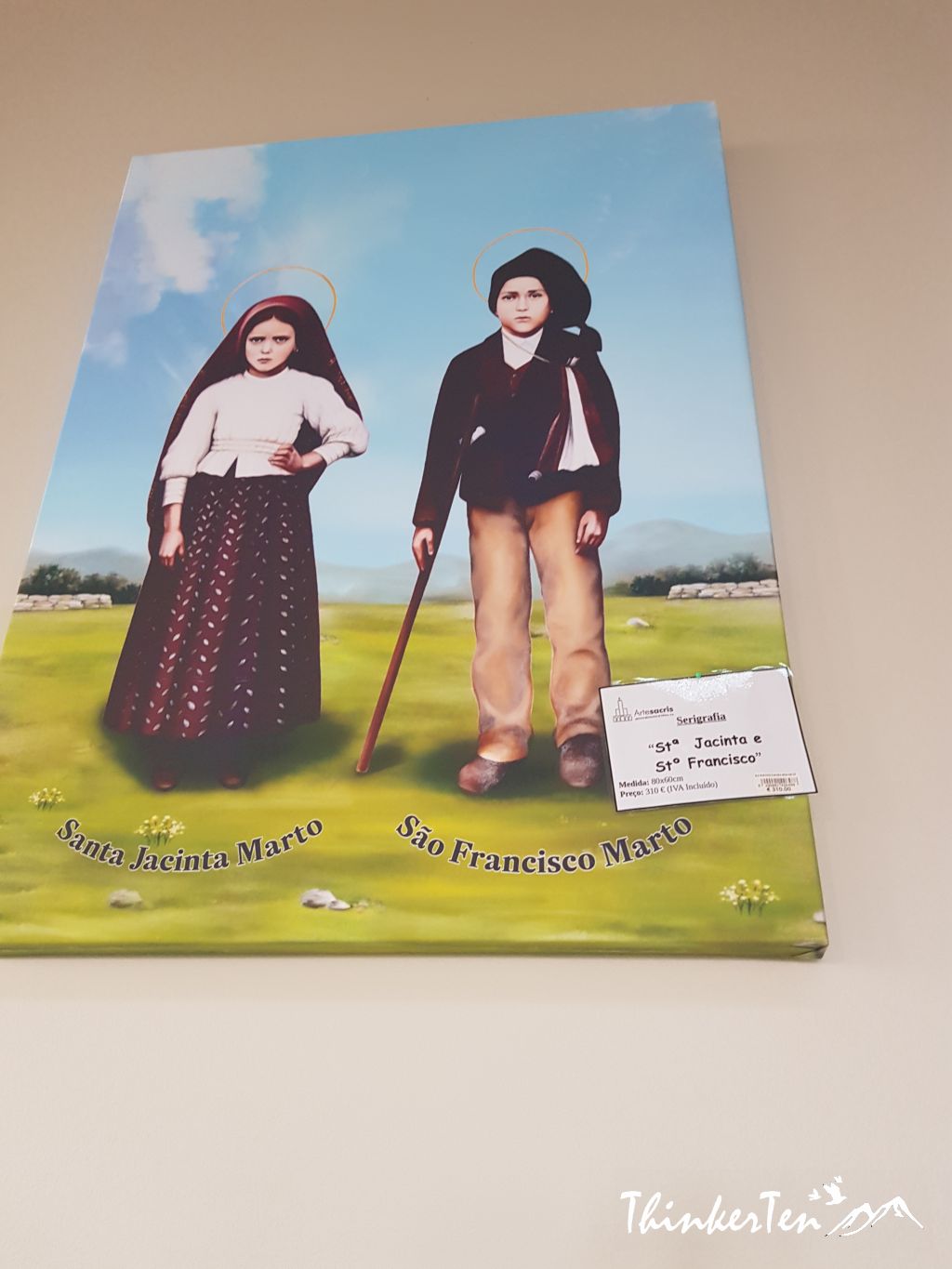 There are two churches, a new and an old. The old church is called the Sanctuary of Our Lady of Fatima and the new one is called The Church of the Holy Trinity which looks very modern and built recently. 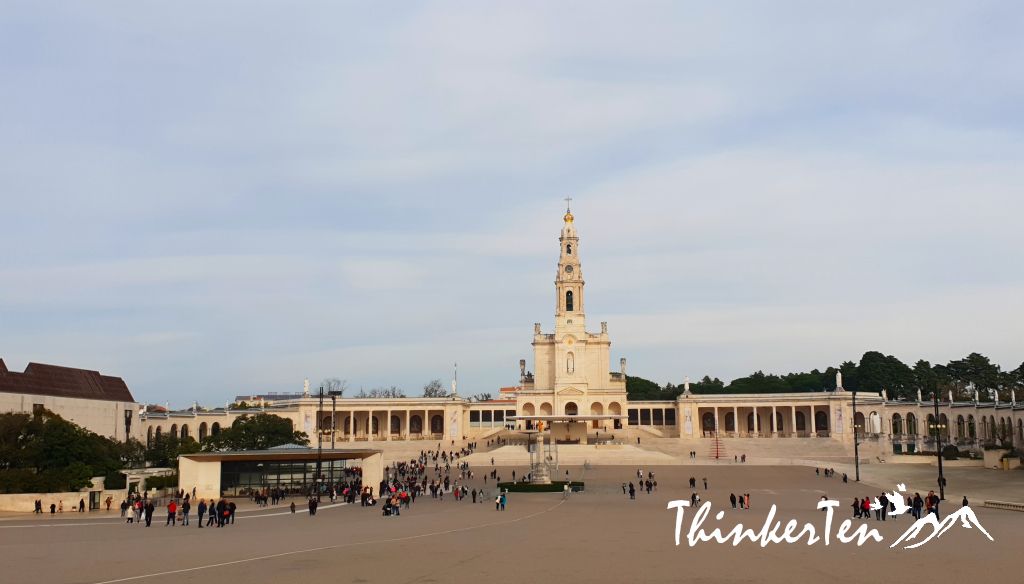 The old church is smaller but with a high ceiling with a neo-baroque style. It has the tombs of Jacinta and Francisco (1951 and 1952). After the death of Lucia in 2005, her body was also reunited to rest here, side by side with her cousins.

Chapel of the Apparition

This is a small chapel built in 1919 on the exact spot where the tree was rooted next to which the Virgin Mary appeared to the three little shepherds. In the center of the chapel, you will find the original statue of the Virgin Mary 1920.  It was really surprising to imagine Virgin Mary appearing before these kids right here 100 years ago. 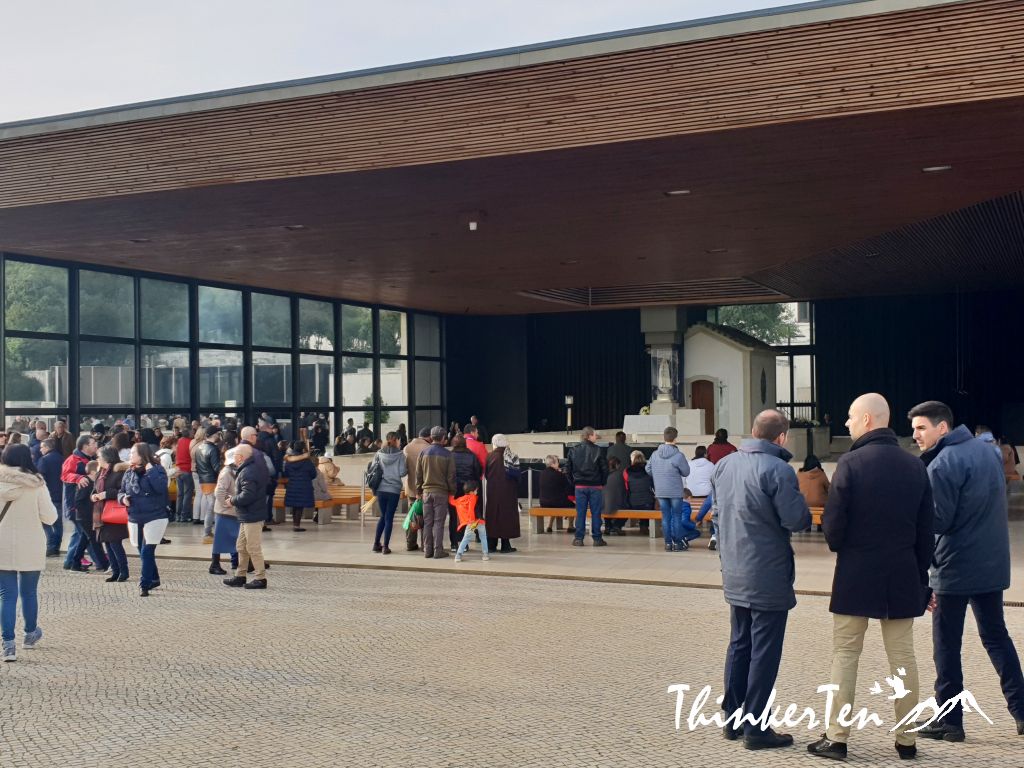 In the Virgin Mary’s crown look for a small bullet that hit the Pope John Paul II in the assassination attempt in Rome in 13th May 1981. 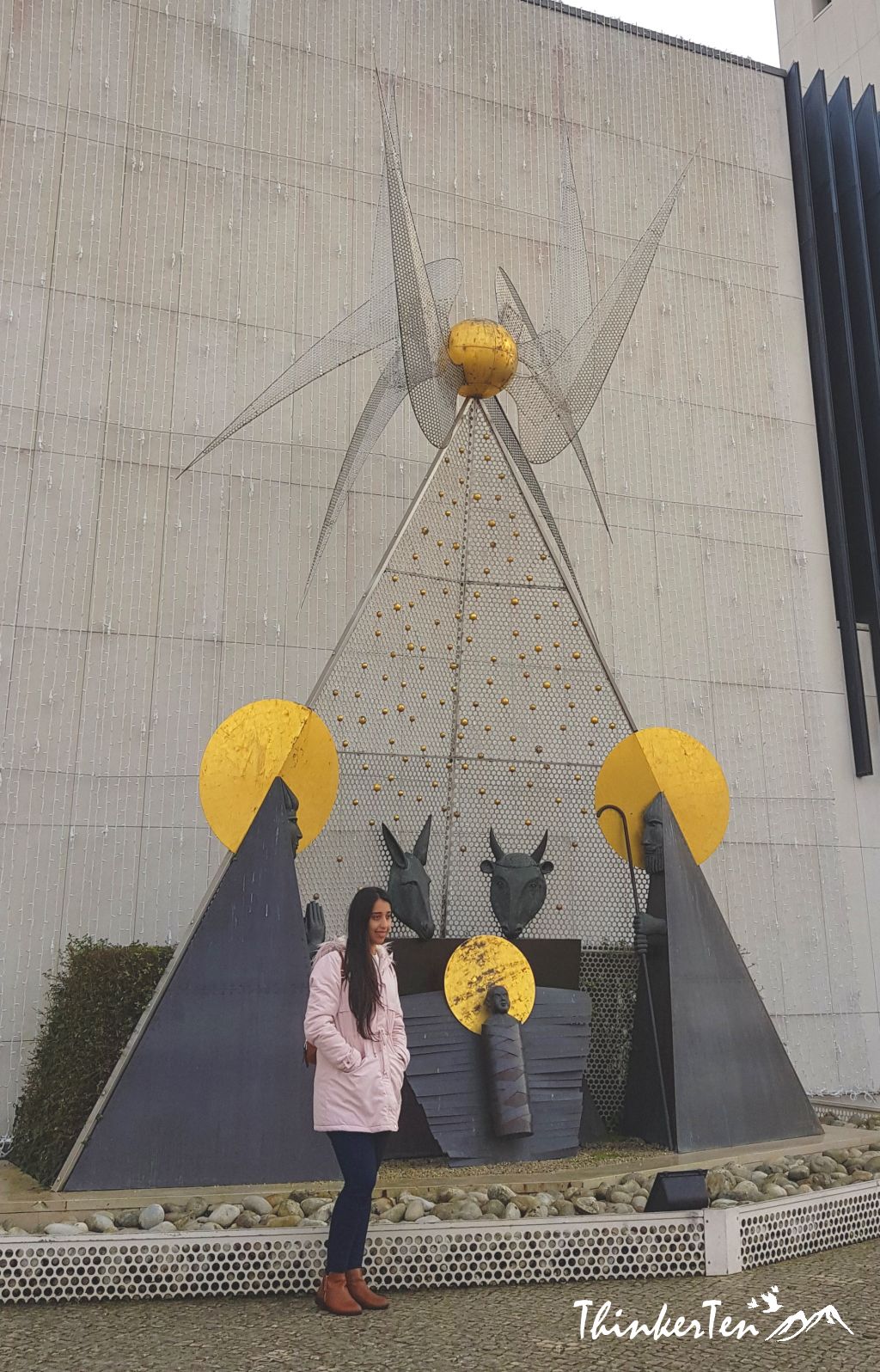 The new church took three years to build and is said to be the world’s fourth biggest church. 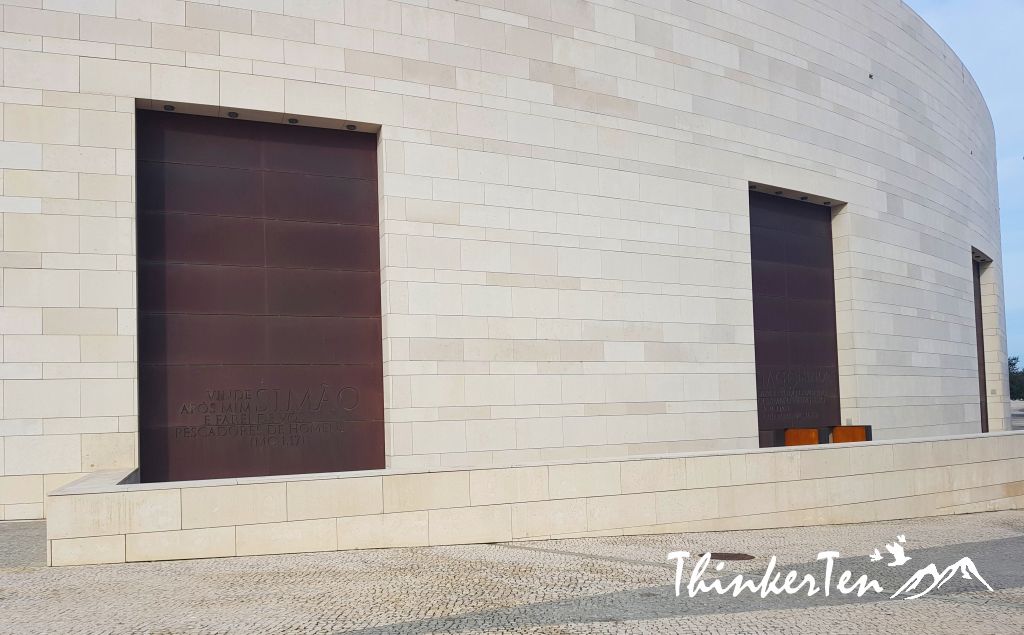 The new church is very beautiful and was designed by Greek architect Alexandros Tombazis, it has 13 doors, said to represent Christ’s last supper with the 12 apostles.

Decoration with the Mysteries of the Rosary in the facade of the new church. (Below picture) 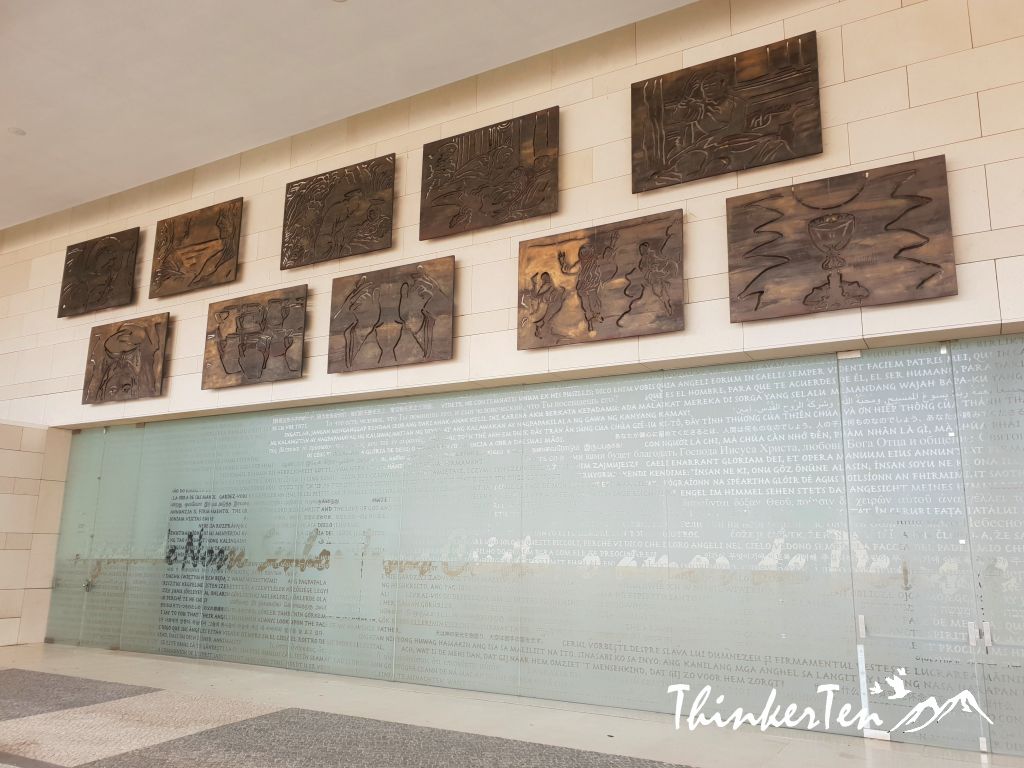 The new church has large walkways around the church and the ceiling is low for a Church standard, the architect has made the entire roof into slanted windows that direct light from the rising sun to the altar giving it a look of heavenly importance. 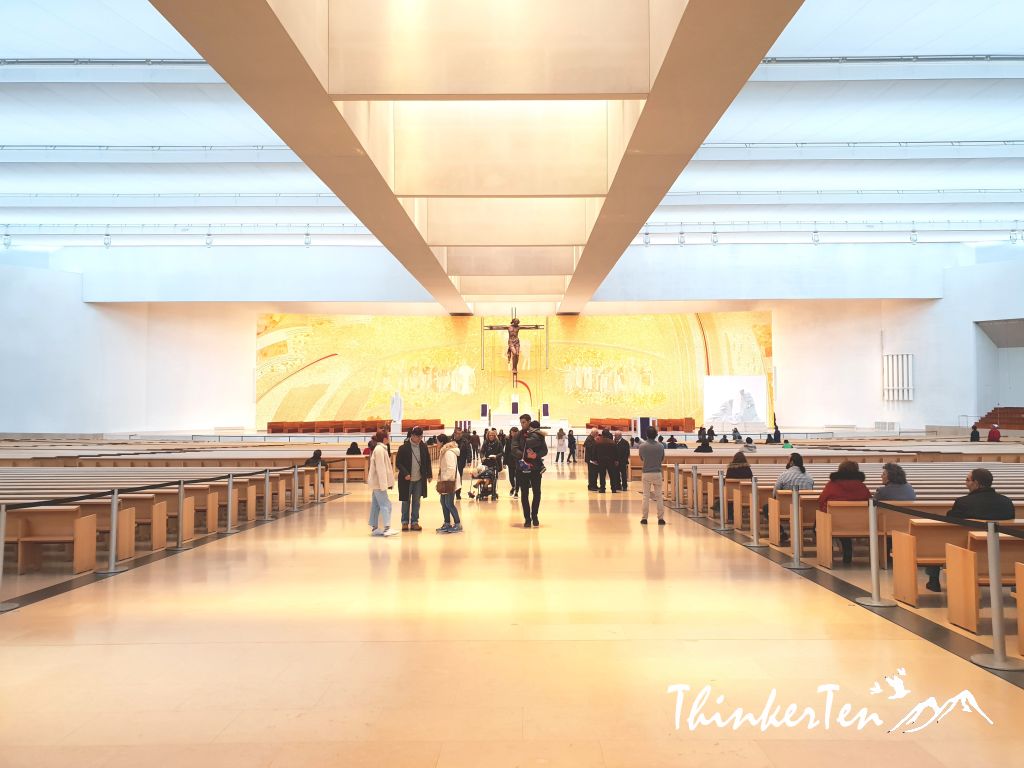 It can sit up to 9,000 worshippers and you see no internal columns to allow television to sweep unobstructed over the congregation during the live broadcast of services.

The Irish Sculpture called Catherine Greene who made this 5 m tall bronze cross with Christ. Her idea is quite unique; “a Christ no longer suffering”.  You see smiling face instead of a suffering face. 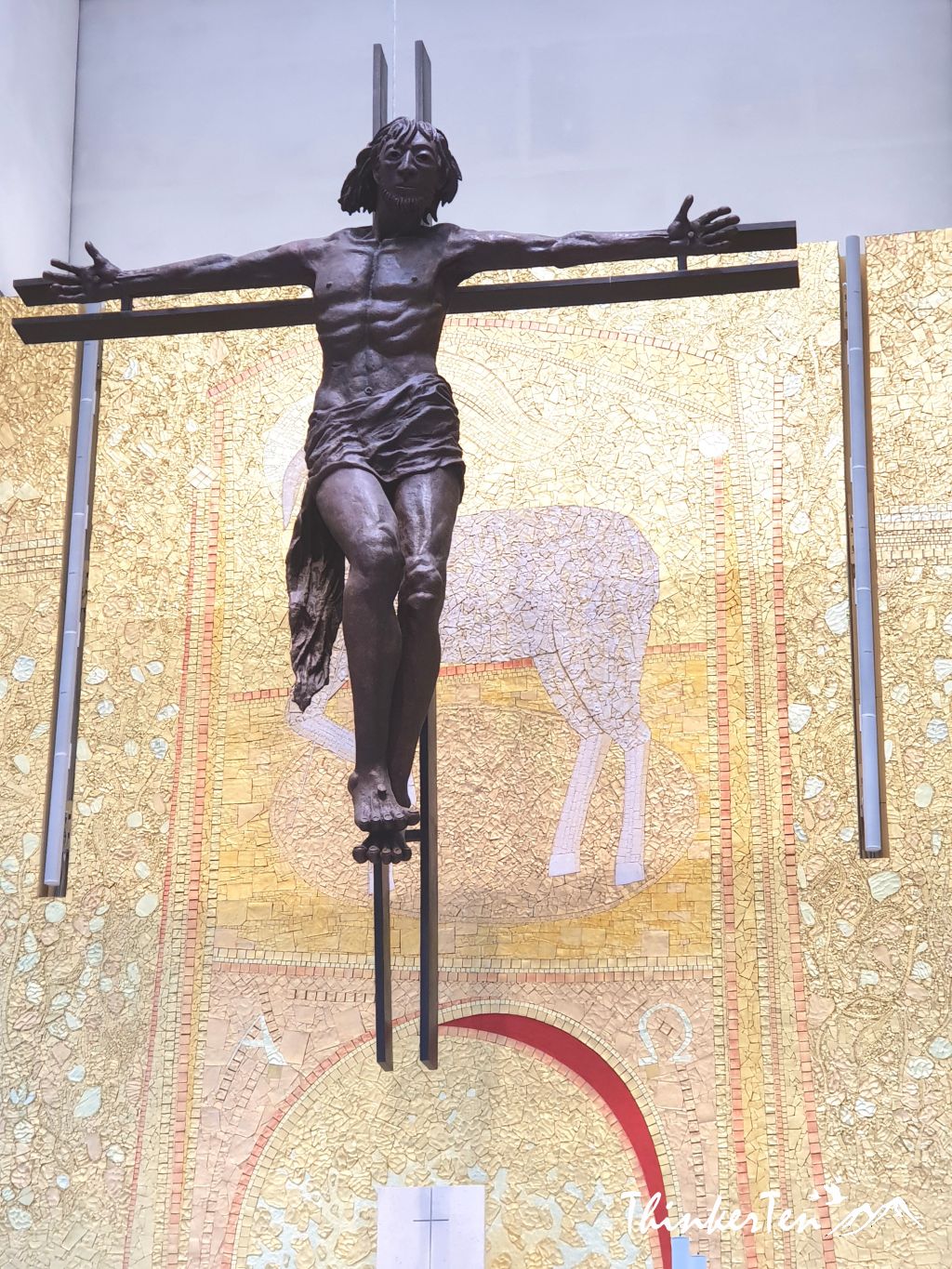 There is a big mosaic across the back behind the altar that is just stunning with the golden color. Showing the community of saints around the cross, all surrounding Christ. 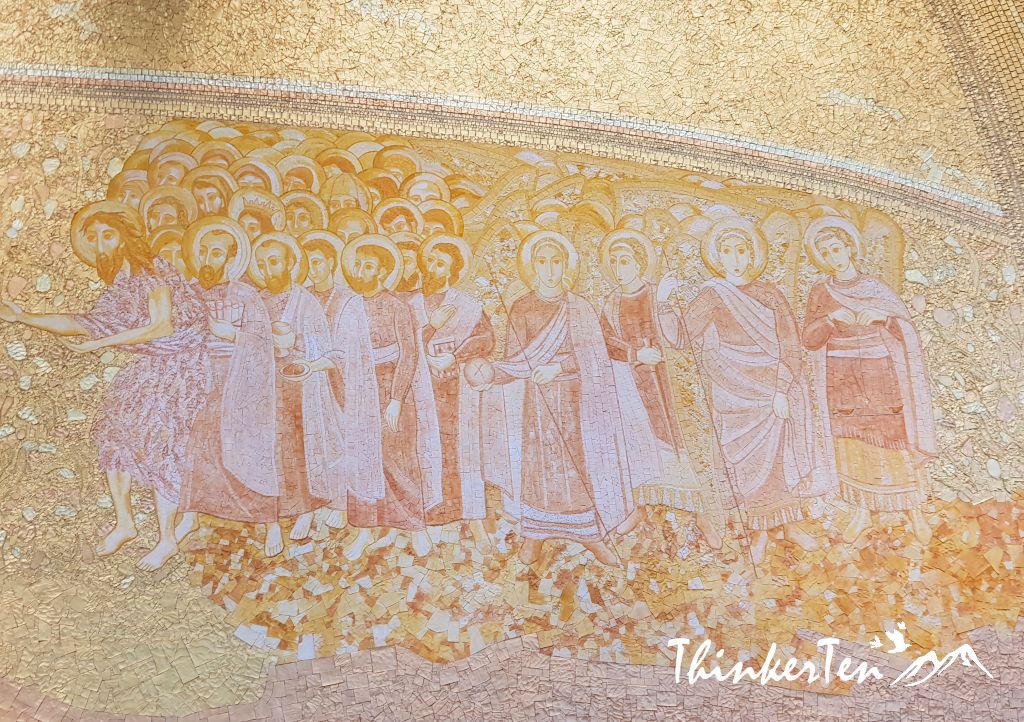 The Weird Looking Cross in Fatima

There is a weird look cross beside the new church.  It certainly looks very different from the ordinary cross you have seen so far.  The cross is designed by Robert Schad who is a German sculptor. His intention is to build the cross not only for the Portuguese but to create a symbol which is as simple as possible in form, has intercultural references and does not get lost in realistic details. 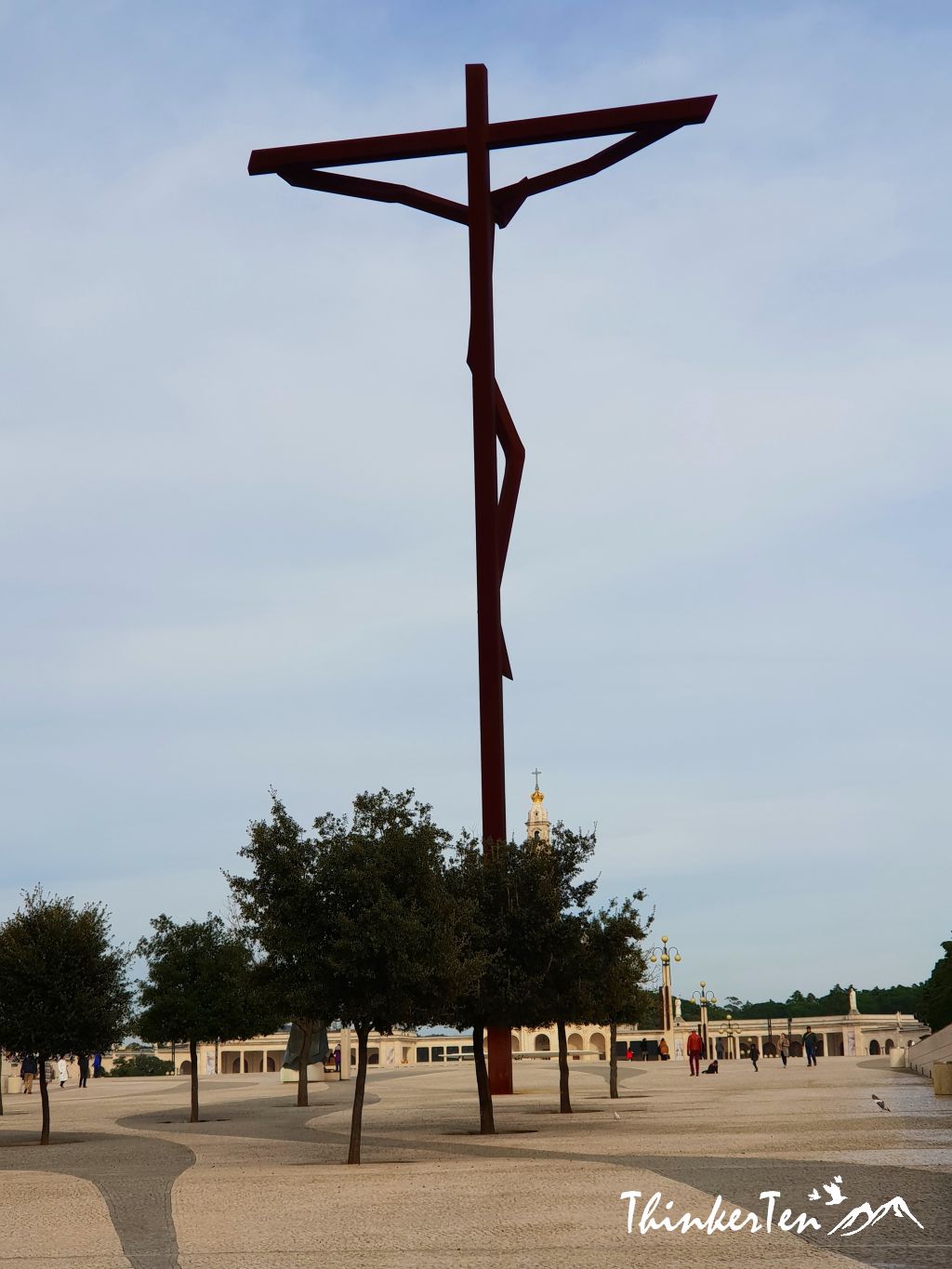 A segment of the Berlin Wall located near the Sanctuary of Fatima.  It was acquired, by subscription, by a group of Portuguese people, headed by Virgílio Casimiro, Portuguese emigrant residing in Germany, and arrived at the Shrine with the support of the Consulate General of Portugal in Frankfurt, on March 5, 1991. 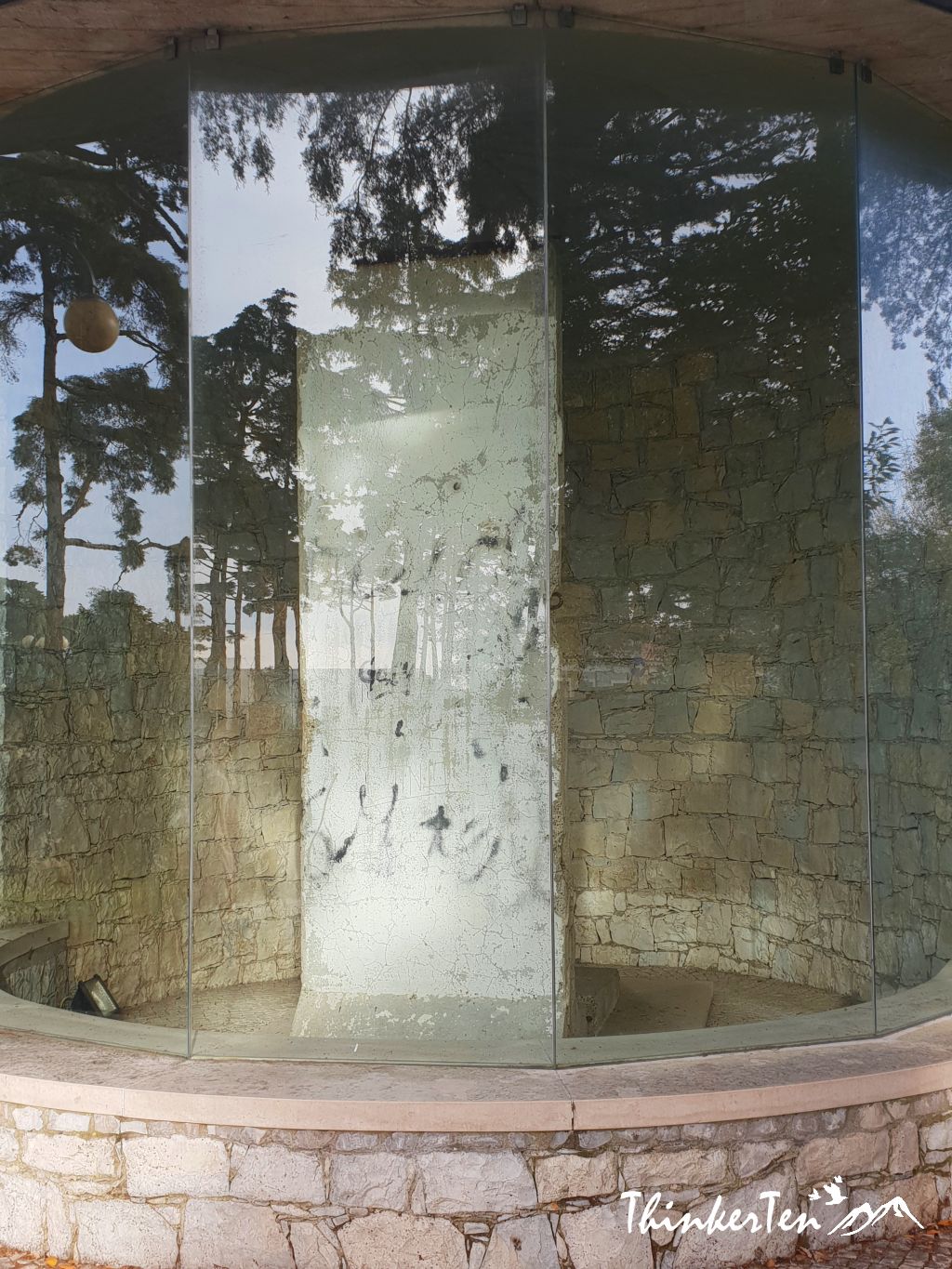 A trip to Portugal would be incomplete without visiting Fatima, an important pilgrim center for Catholics around the world. The place was unlike any religious place because it was very so massive and the entire town of Fatima revolved around the religious history of the town. 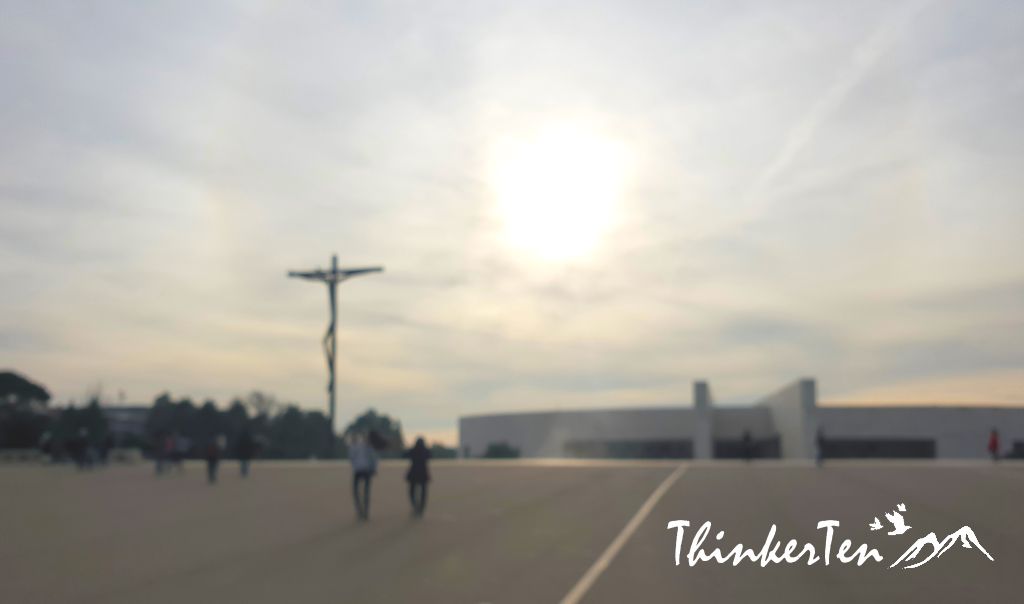 Kimono Rental Review – Everything you need to know about Kimono, including the rental price.

Knights Templar of the Convent of Christ in Tomar city, Portugal

I would love to see Fatima for myself one day. The architecture there is amazing. I can feel the history just looking at these photos.

The Fatima Church is incredible huge and stunning to look at.

I visited Fatima last year when we were in Portugal, what a serene and magical place, love it. Thanks for sharing.

Glad you have also visited this place, it is indeed serene and calm.

I’ve heard Portugal is a really beautiful place. I hope to visit there one day.

I would really love to visit Fatima one day, I would love to know more about it’s history, this place looks overwhelming.

Our Lady of Fatima appeared six times to the three shepherd kids and that’s a miracle indeed.

I can really picture myself in Fatima by looking at your photos. I hope to go there some day. Looks like an amazing place.

The old church of Fatima make a good backdrops of your photos with no doubt.

I’d love to visit Portugal. Fatima sounds like a great place to visit and explore

Portugal is a magical place to visit and to include Fatima is a good choice especially if you are Catholic.

Fatima is a place I’d definitely like to visit for myself in the future. It seems so fascinating.

This is a dream vacation for those of the Christian Faith. I could see a lot of religious experiences happening there

Yes, the crawling on their knees on the ground is one of the scenes you could see in Fatima Sanctuary site.

Wow! Those mosaics are gorgeous and so detailed! What an amazing experience!

The mosaics at the altar is stunning with gold, pretty amazing to be able to sit at the new church and enjoy the praying atmosphere.

I would love to travel to Portugal one day; it looks like you had a lovely vacation!

Such a great detailed post. This would be a big help in planning a trip here.

People who usually come from Salamanaca Spain, then go to Fatima and then go to Lisbon. This is our route.

What a lovely place it is. This makes me feel anna go here soon. Truly a bucket list material.

Omg what a charming little town!! I have always wanted to visit Portugal!!!

Fatima is a small town which is so important for the Catholics.

I’d love to visit these places one day. Regarless of ones religious belives, it is a great education of differnt cultues.

I totally agree with your view and well said.

I have never heard of Fatima before but I now want to visit. It looks beauitful

Dear Chelseamama,
It is located in the cenral of Portuguese town that’s Catholic pilgrimage site.

I have never heard of this place before but I am loving your tips. Your photos are also really gorgeous!

I never been in Portugal but it looks so attractive spot to visit.

I’ve never been here – in fact I’ve never even heard of it! I definitely want to go in the future 🙂 thanks for a comprehensive guide and lots of information x

I love the title of this post, I was in Portugal in December and excited to return in a few months time. I am adding Fatima to the list