Knights Templar of the Convent of Christ in Tomar city, Portugal

When we reached Portugal, we went to Fatima in the morning and later went to Tomar city, a small Portuguese town which should be included in if you are doing your pilgrimage tour in Fatima. Tomar is only half an hour from Fatima so the more you should go to Tomar to check it out, especially if you like to learn about history.

The Tomar Castle and Convent of Christ 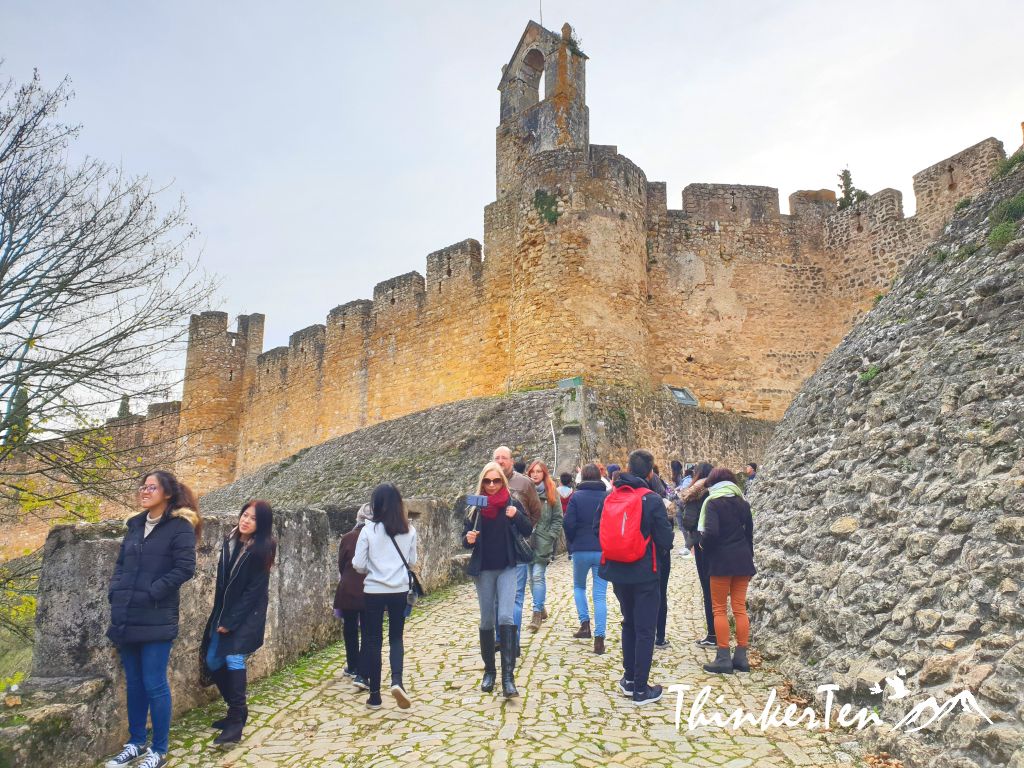 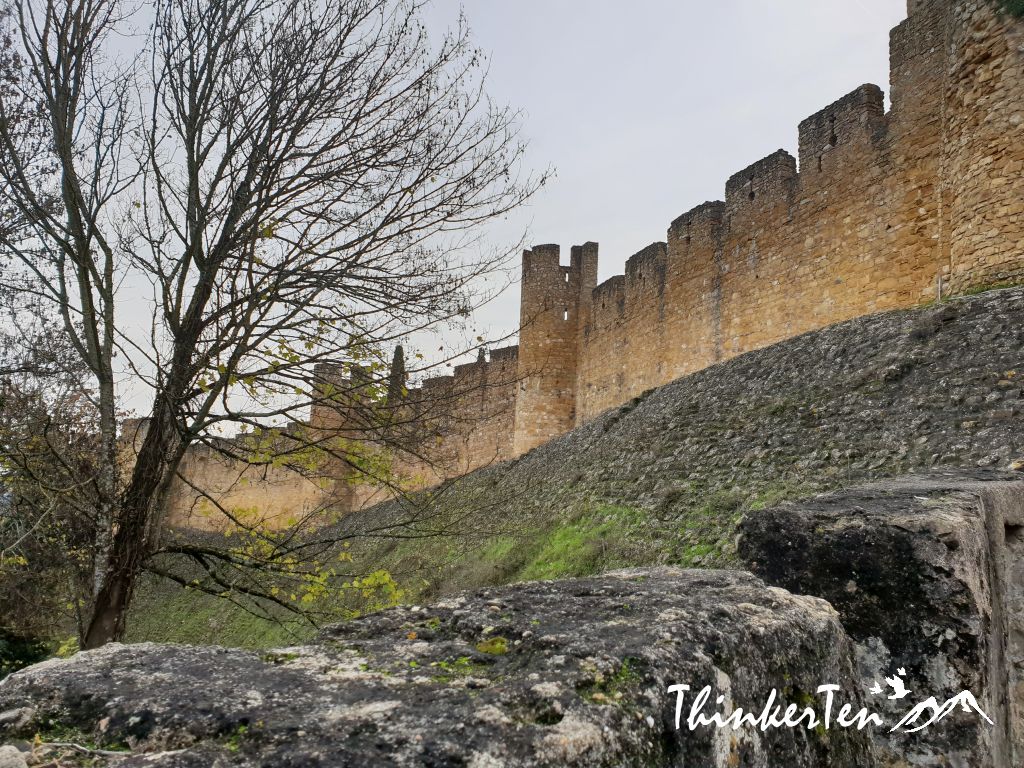 Who are the Knights Templar?

The Templar is “Medieval superman” and during the Middle Ages (5th to the 15th century), Templars are famous across the world. It was a large organization of devout Christians with their mission to protect the European travelers visiting sites in the Holy Land. They are famous with their white outfit and the red cross in their chest.  I bet you have seen them in the movies. (Photo credit) 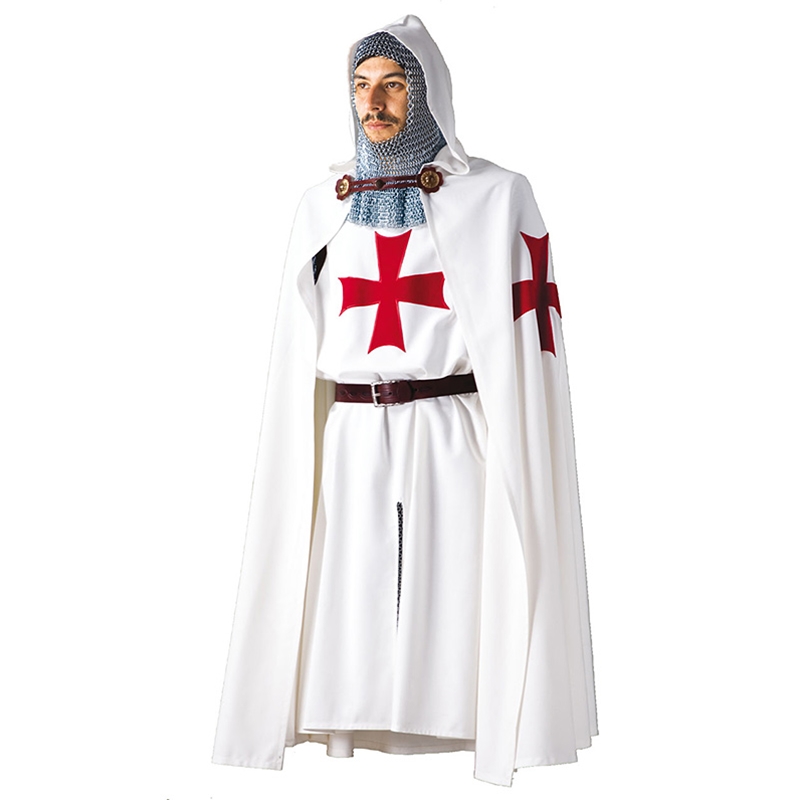 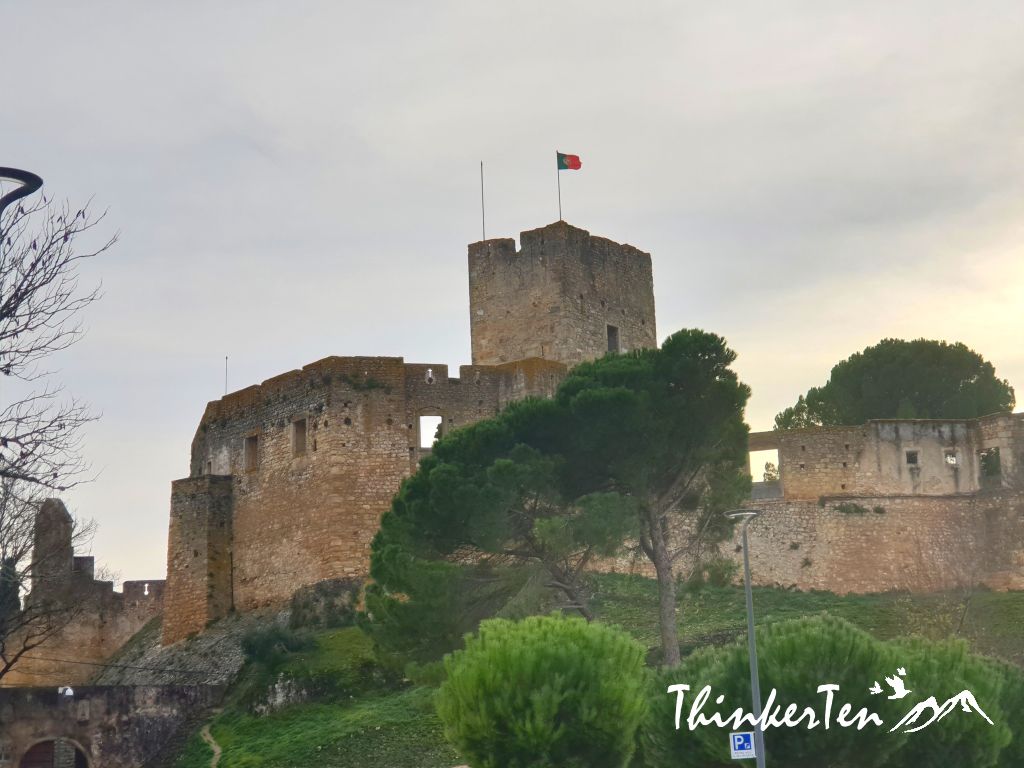 Orange Orchard in the Castle

A few lines of orange trees were planted neatly in the castle complex. 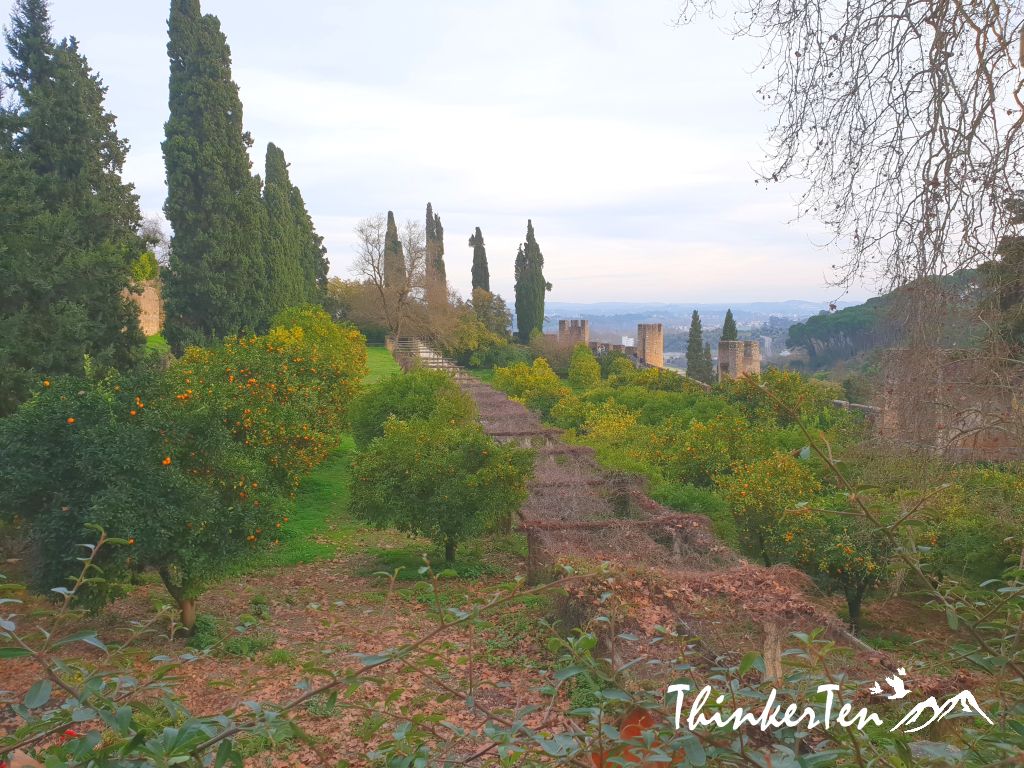 We don’t get to see orange tree back home so seeing them are really great. 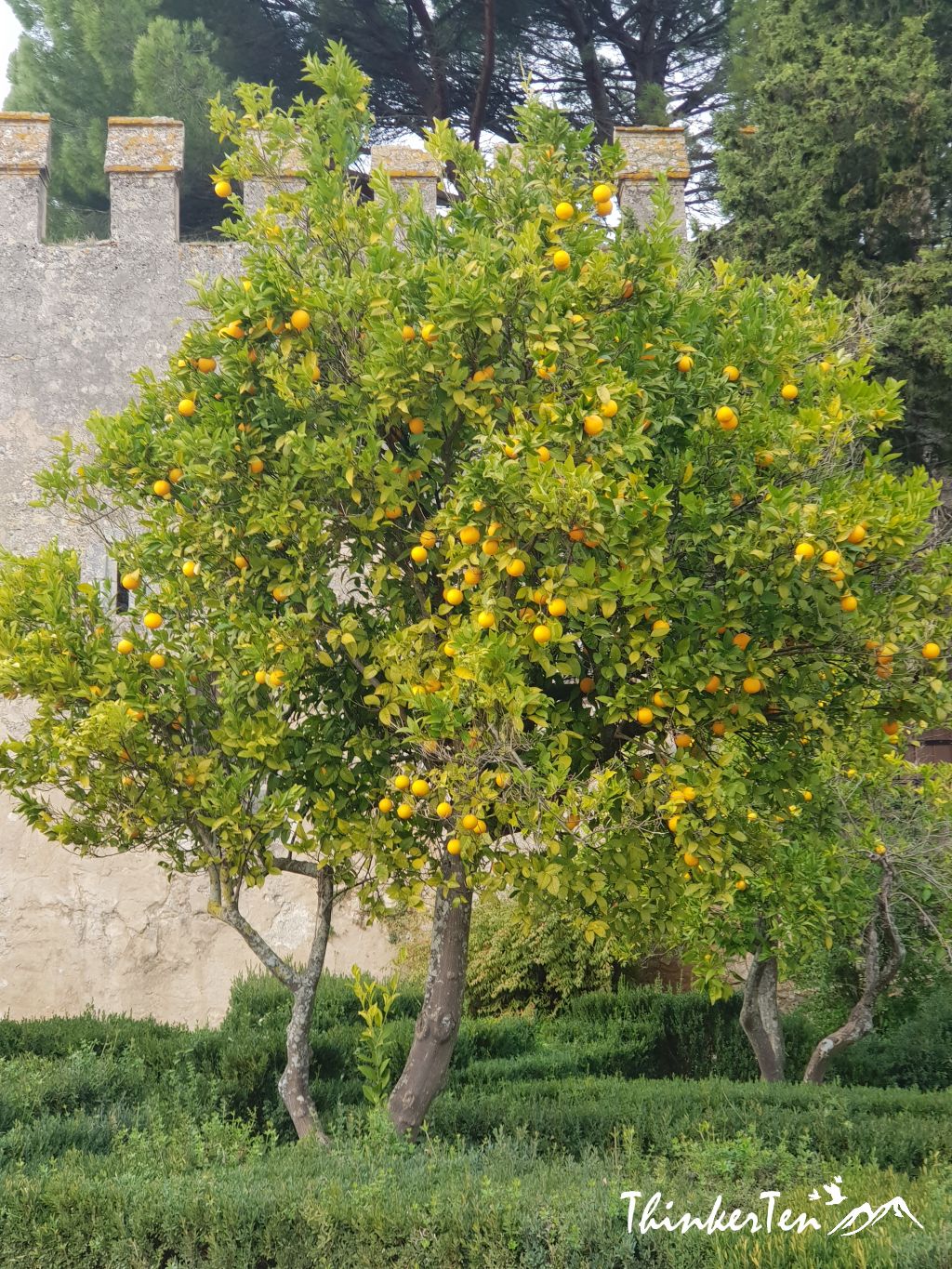 Built over five centuries, this place- a church and a castle came to symbolize the Portuguese maritime expansion during the Manueline period in the 16th century.  In 1983, it was listed in as UNESCO World Heritage Site. 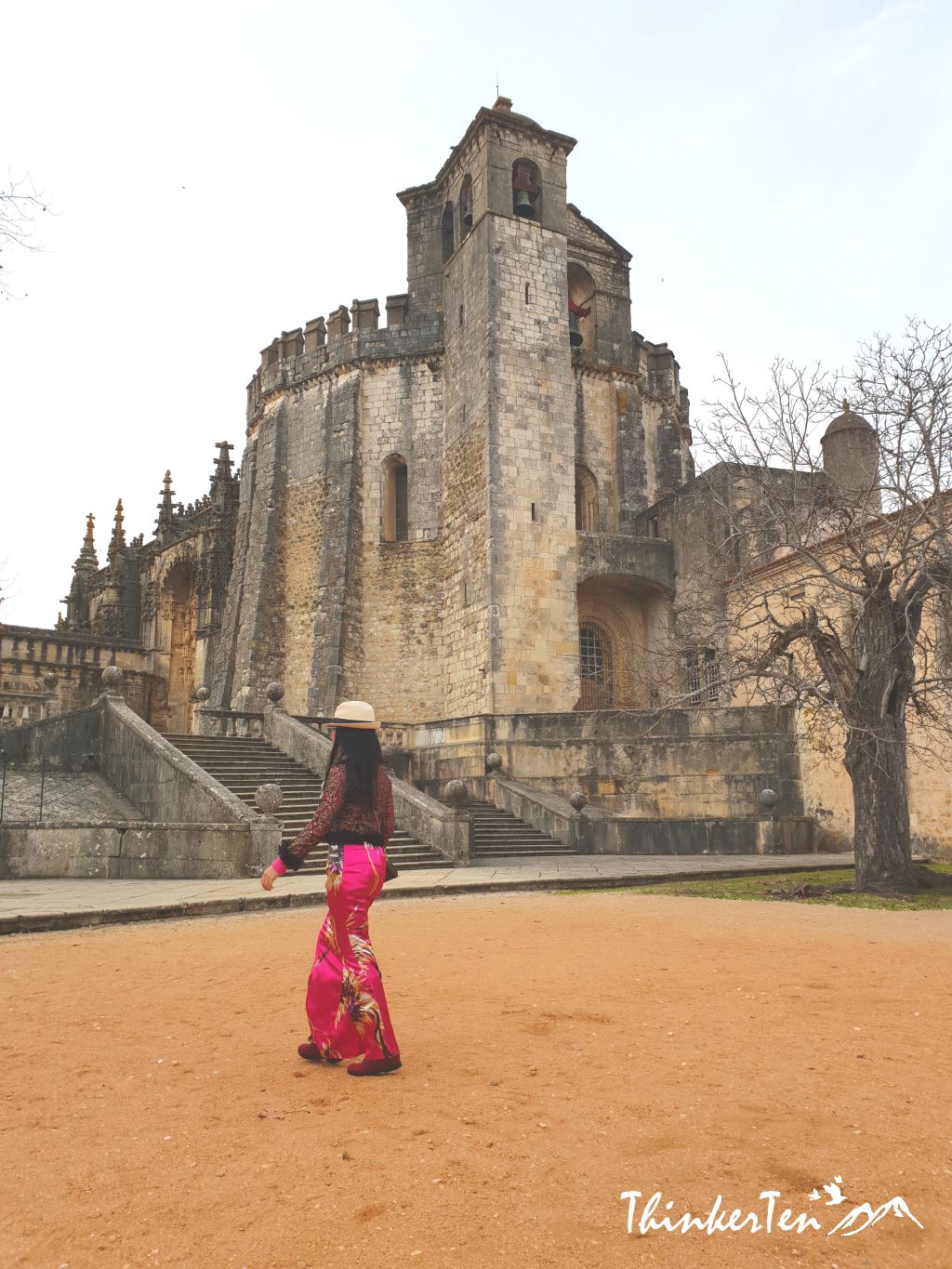 The entrance of the Convent church in Manueline style

The Manueline style is Portuguese late Gothic, composite Portuguese style of architectural ornamentation of the first decades of the 16th century. 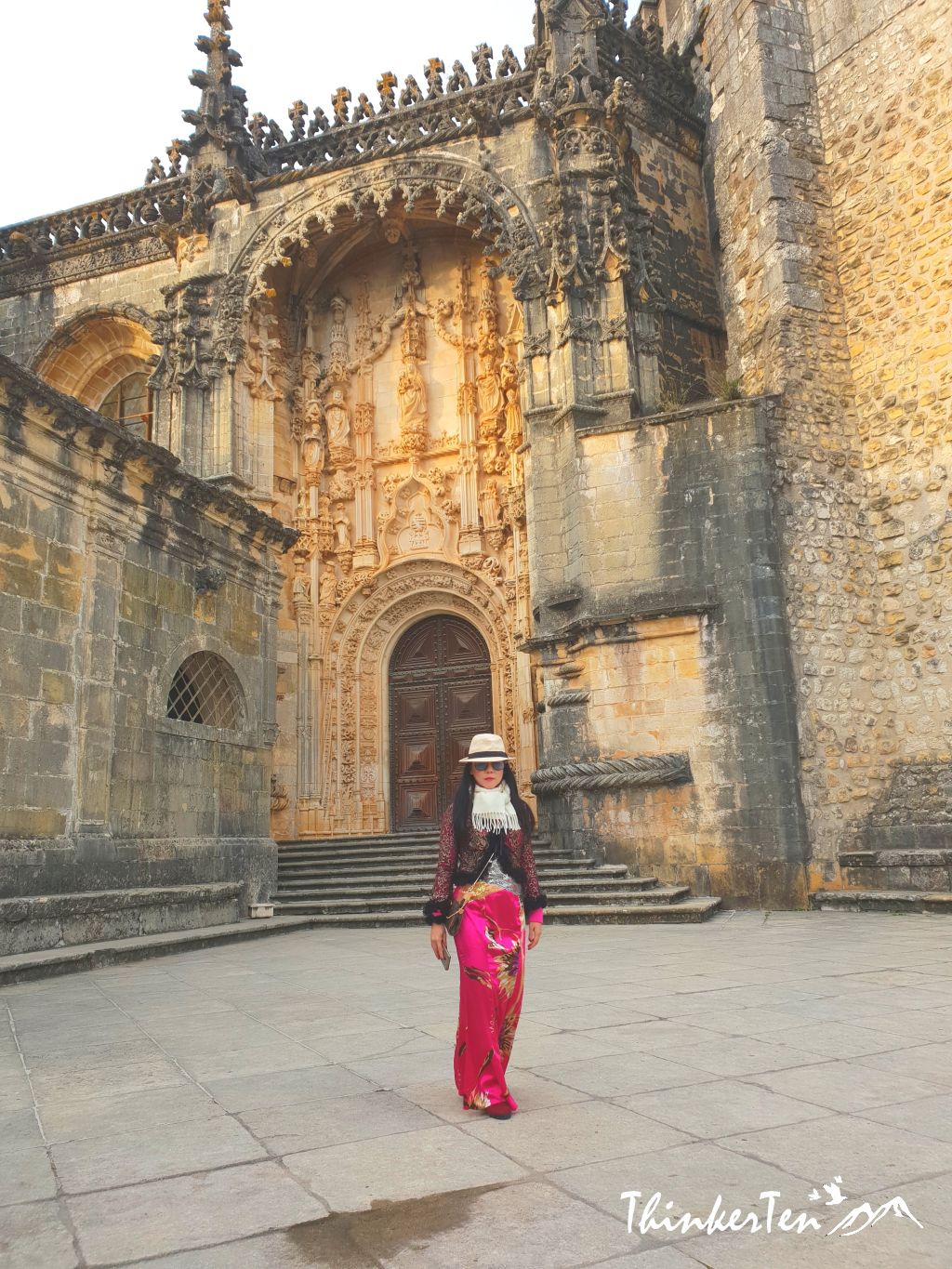 The special window is very huge and decorated with sculptures of marine plants, navigational instruments, and sailing robes.  This is another masterpiece showing the Manueline style.  The style was much influenced by the astonishing successes of the voyages of discovery of Portuguese navigators, from the coastal areas of Africa to the discovery of Brazil and the ocean routes to the Far East – Malacca.  Portuguese sea power can be seen here. 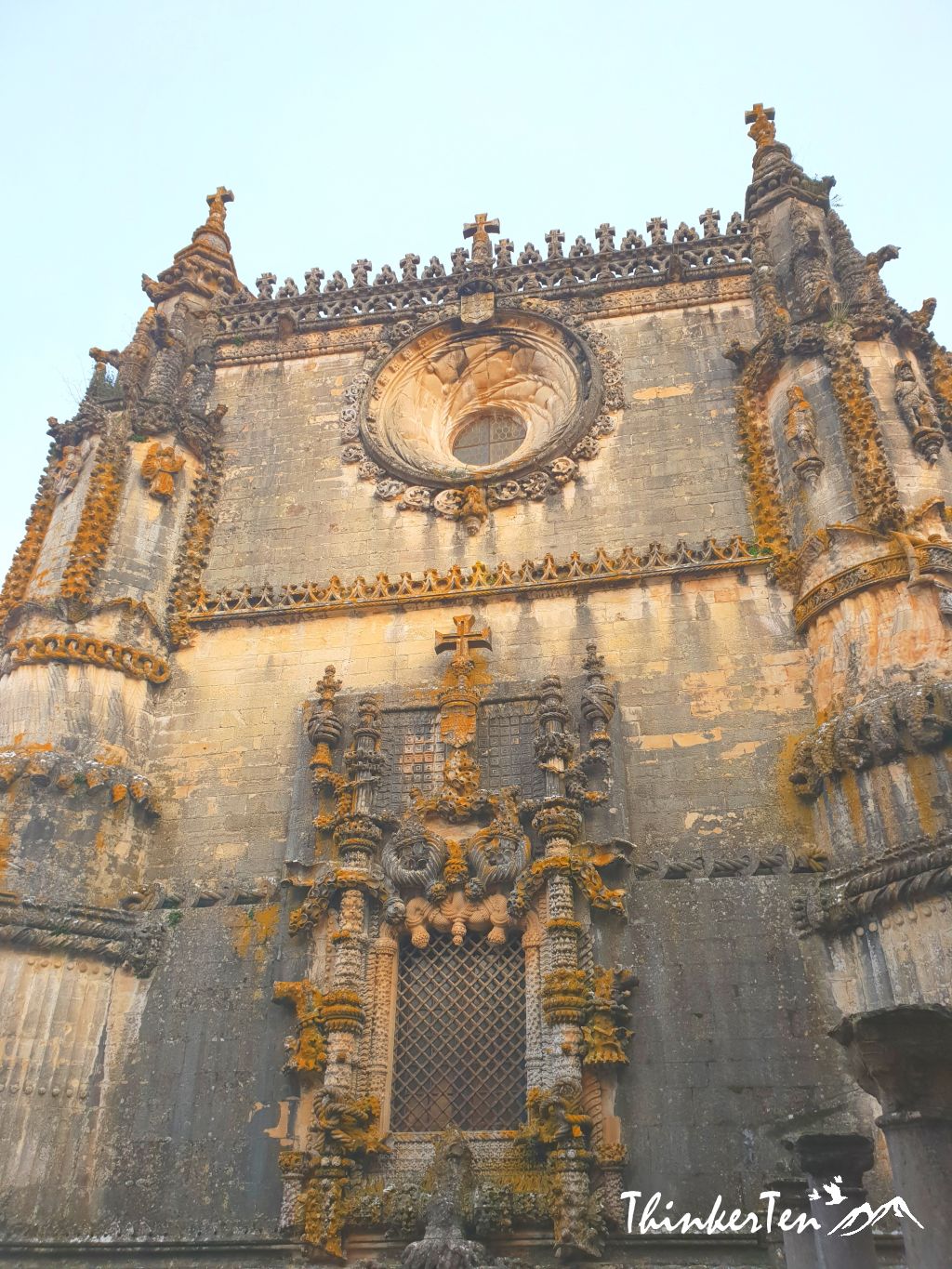 With a population of just 40,000 people, Tomar is located in Central Portugal and northeast of Lisbon.  This is really a small town and not many people visiting which is a good thing as you don’t get too many photobombs in your photos. 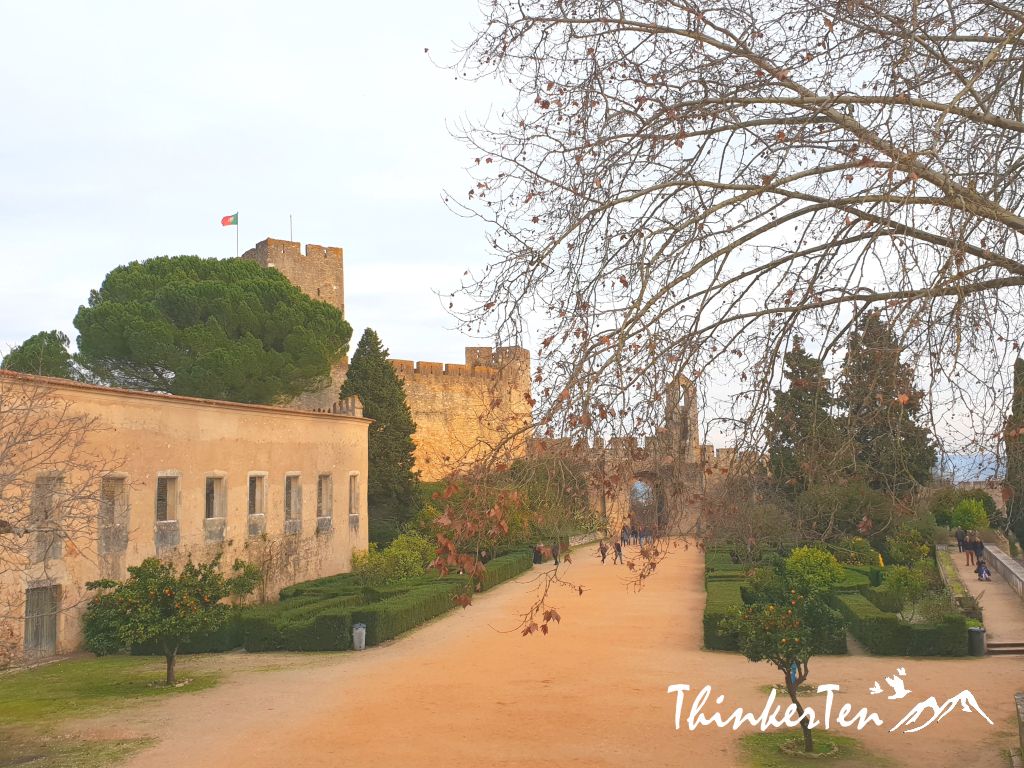 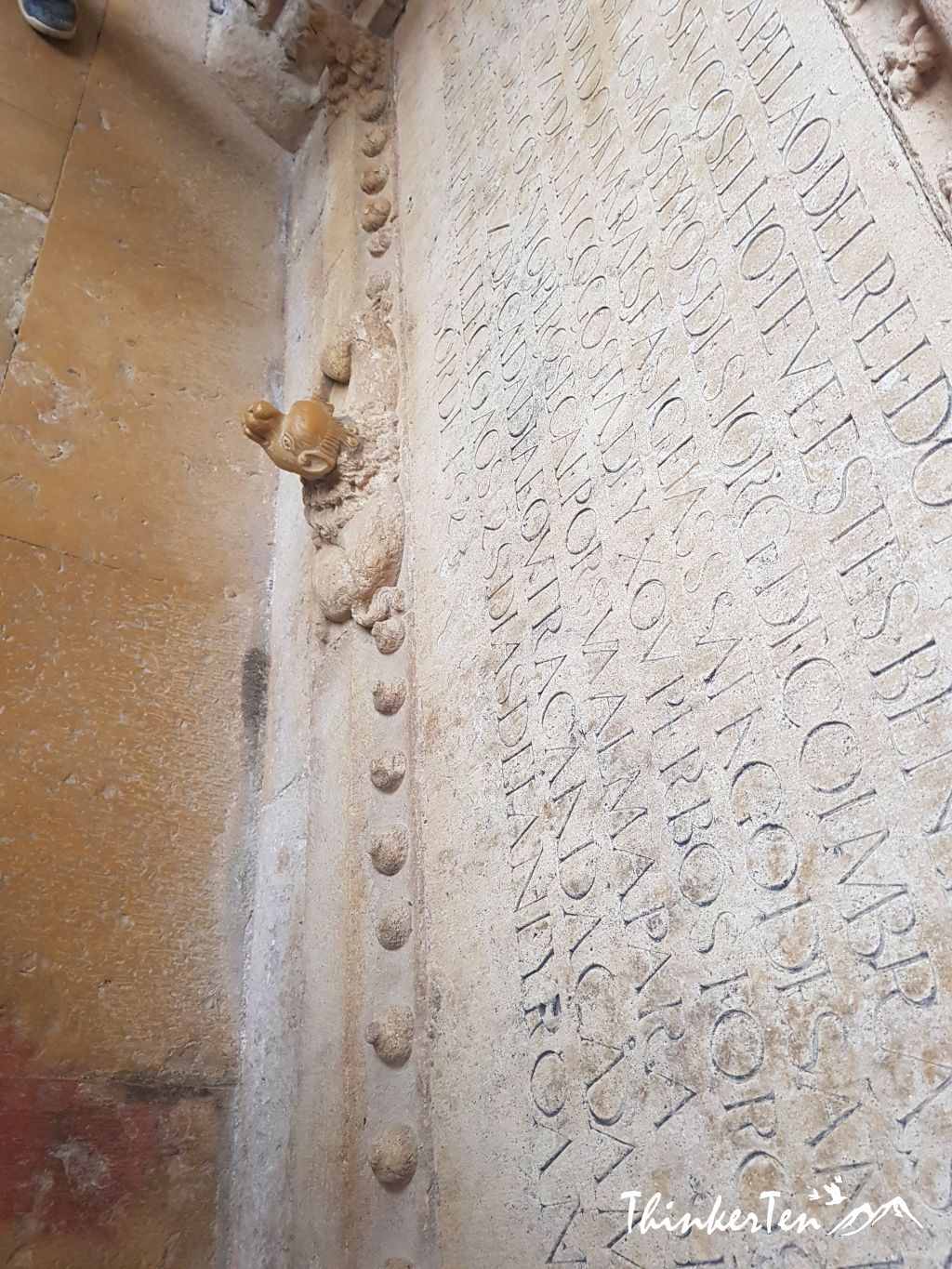 You could see the red cross which was also used on the Knights Templar’s outfit, on top of the ceiling of the Church. 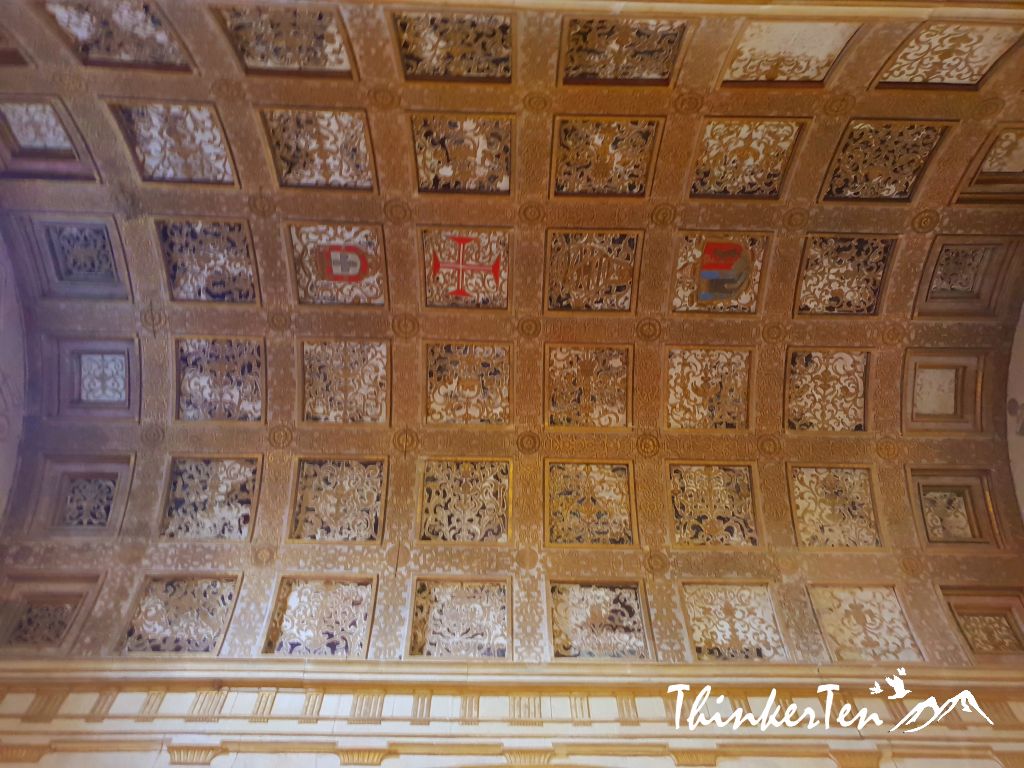 Print on the Wall 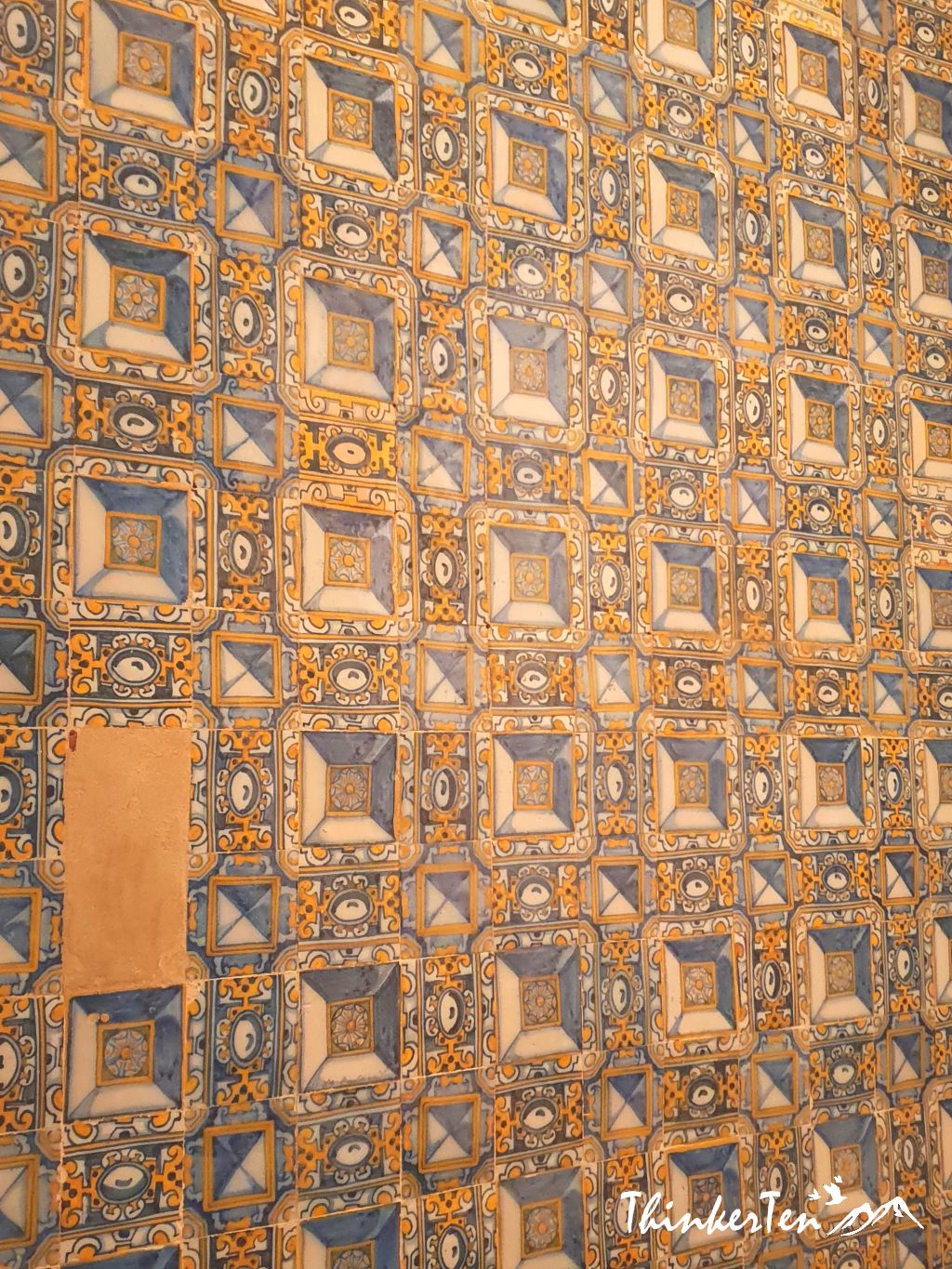 This would be the most impressive feature, having the octagonal altar beneath a 16 segment dome. Number 8 is an example of medieval Christian numerology. 8 means new beginning or it denotes “a new order or creation” 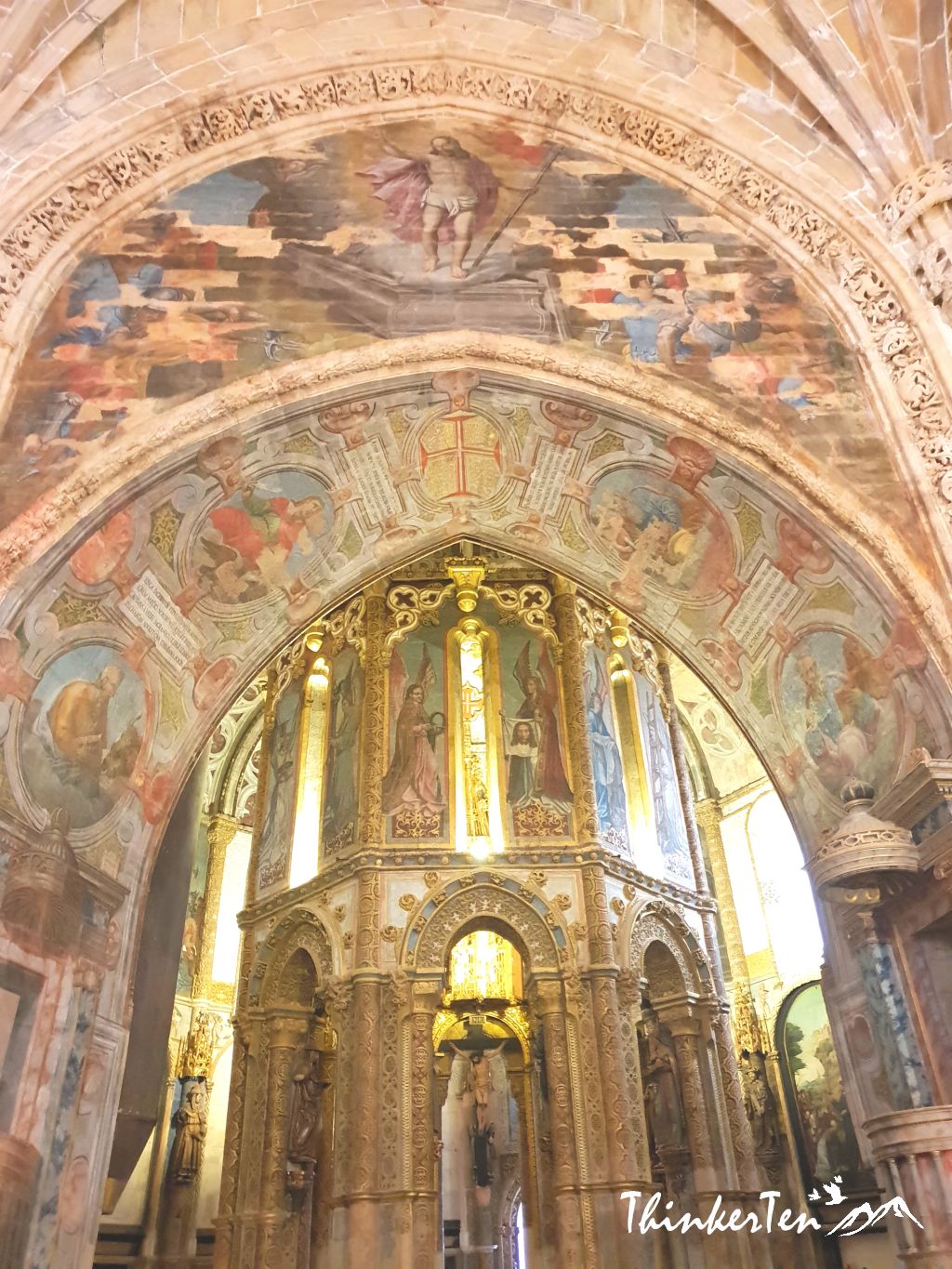 Interior of the Round church decorated with late Gothic painting and sculpture.

The decoration is very colorful, with lots of gold & eastern influences. 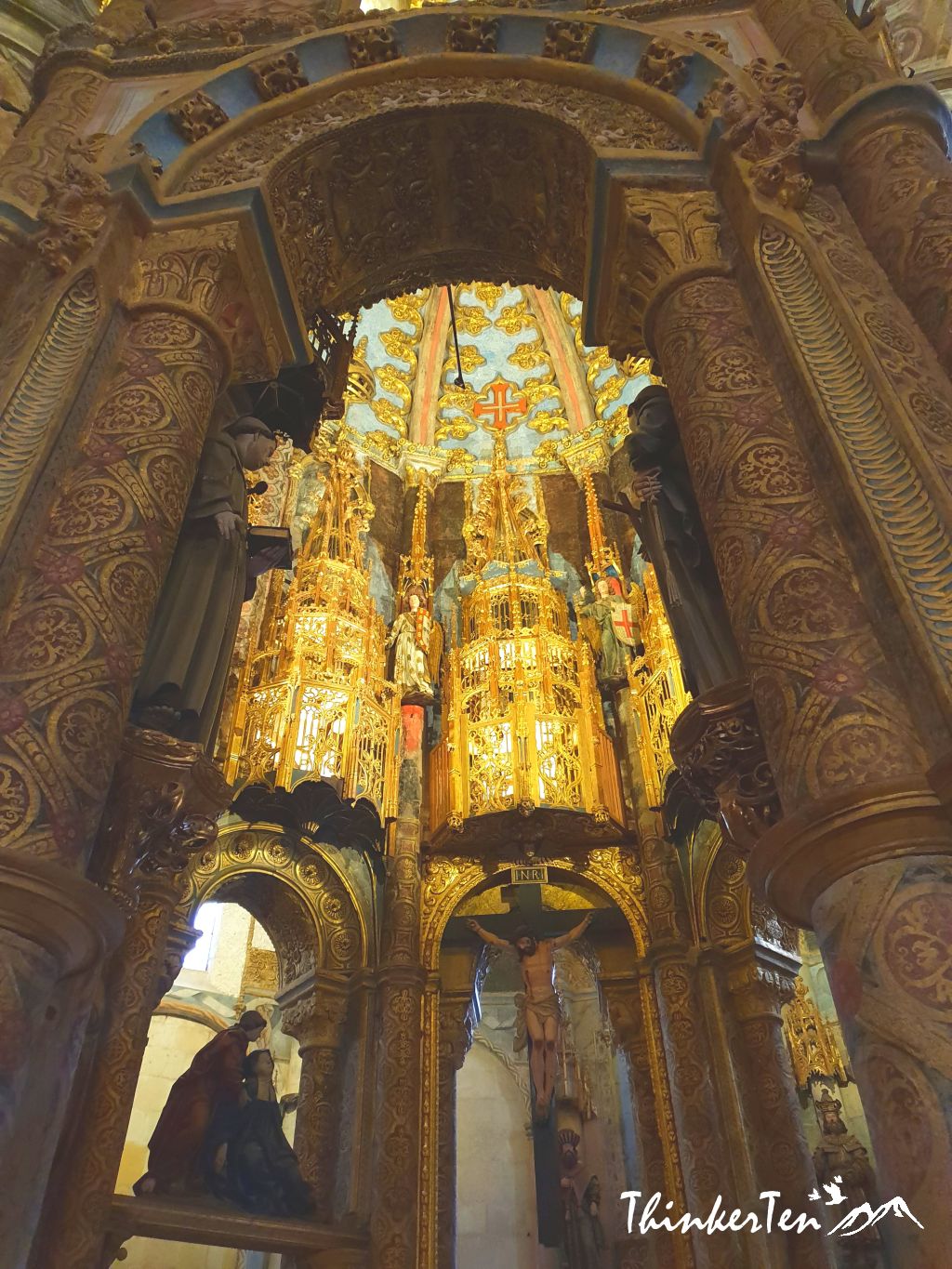 There are endless hallways and passageways and large rooms but I am not sure what are those used for. Don’t walk alone as you may get lost. Plenty of narrow staircases to walk so be extra careful as it is quite dim. 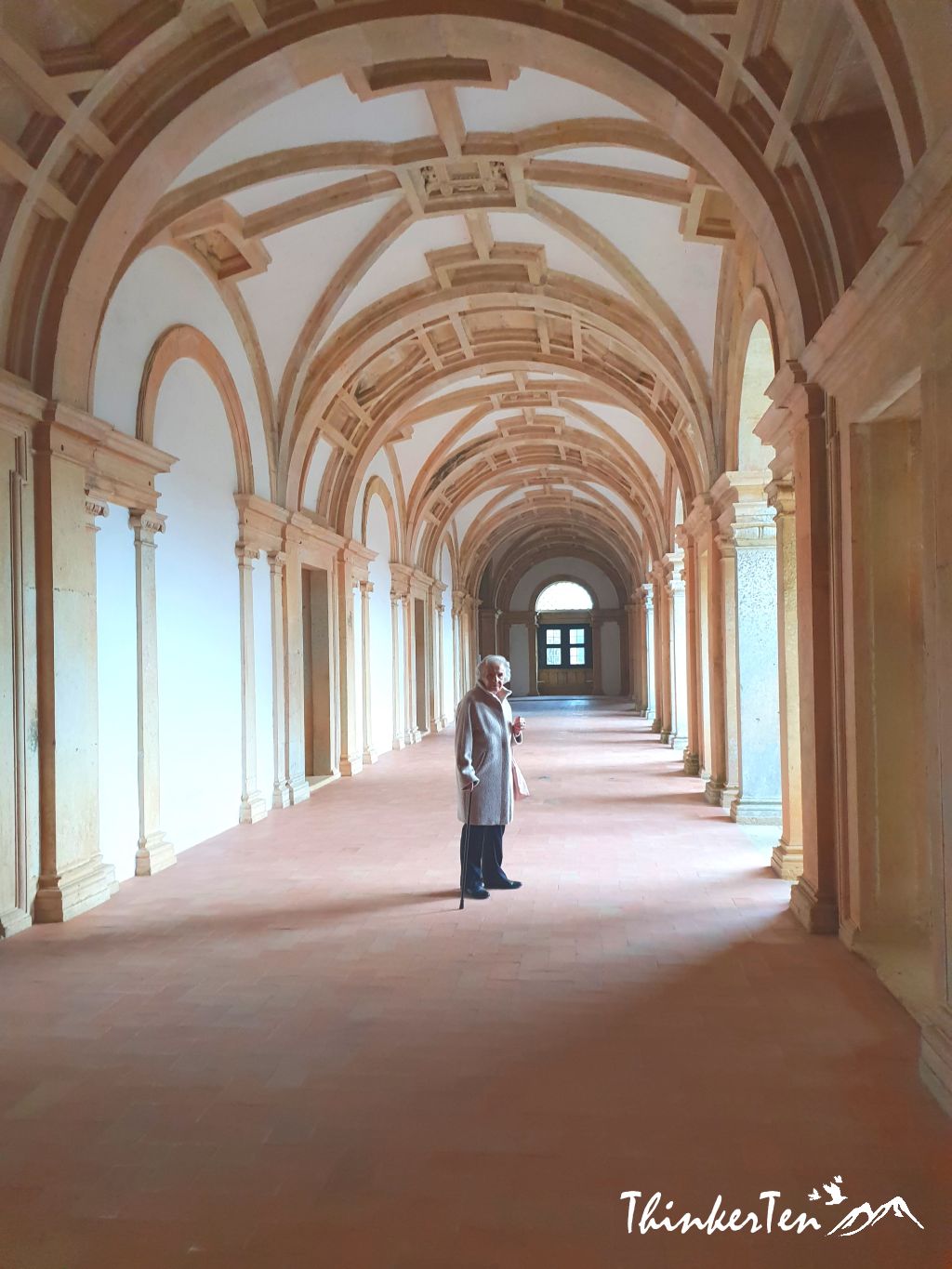 Fountain in the main cloister of the Convent of Christ

This place has few cloisters, one where you can look down from the top when you are at the highest level. There is a fountain in the middle. Not many people visiting this place and I am not sure why? 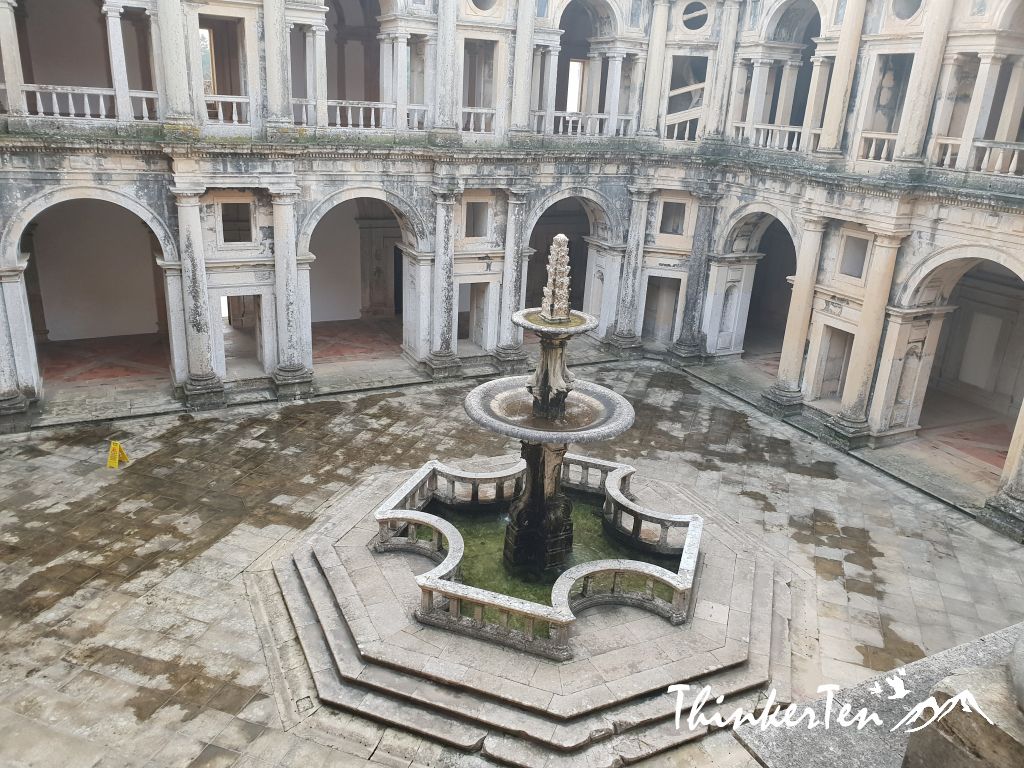 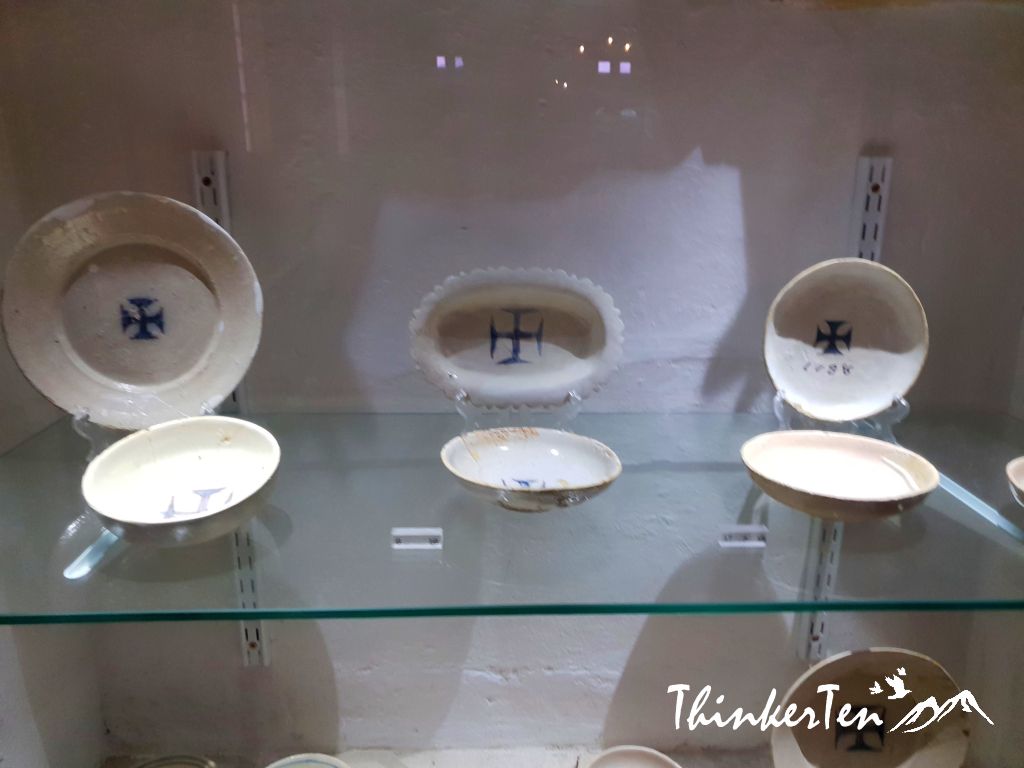 We spotted a “tuk-tuk” in Tomar, the motorized three-wheelers seem to be common in Portugal, especially in Lisbon. We see more of tuk-tuk in Lisbon, I guess it is easier to operate and cheaper. 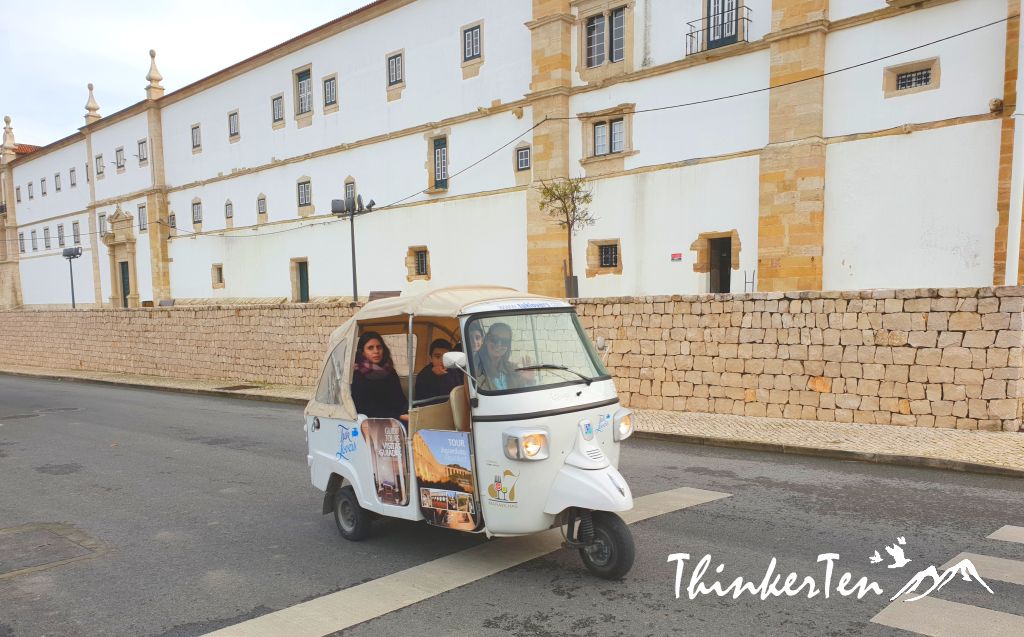 My Tomar trip has made me understand more about the Knights Templar history.  This place is more suitable for people who love about history and not much for young children.  A day trip is enough if you are staying in Fatima or from Lisbon. 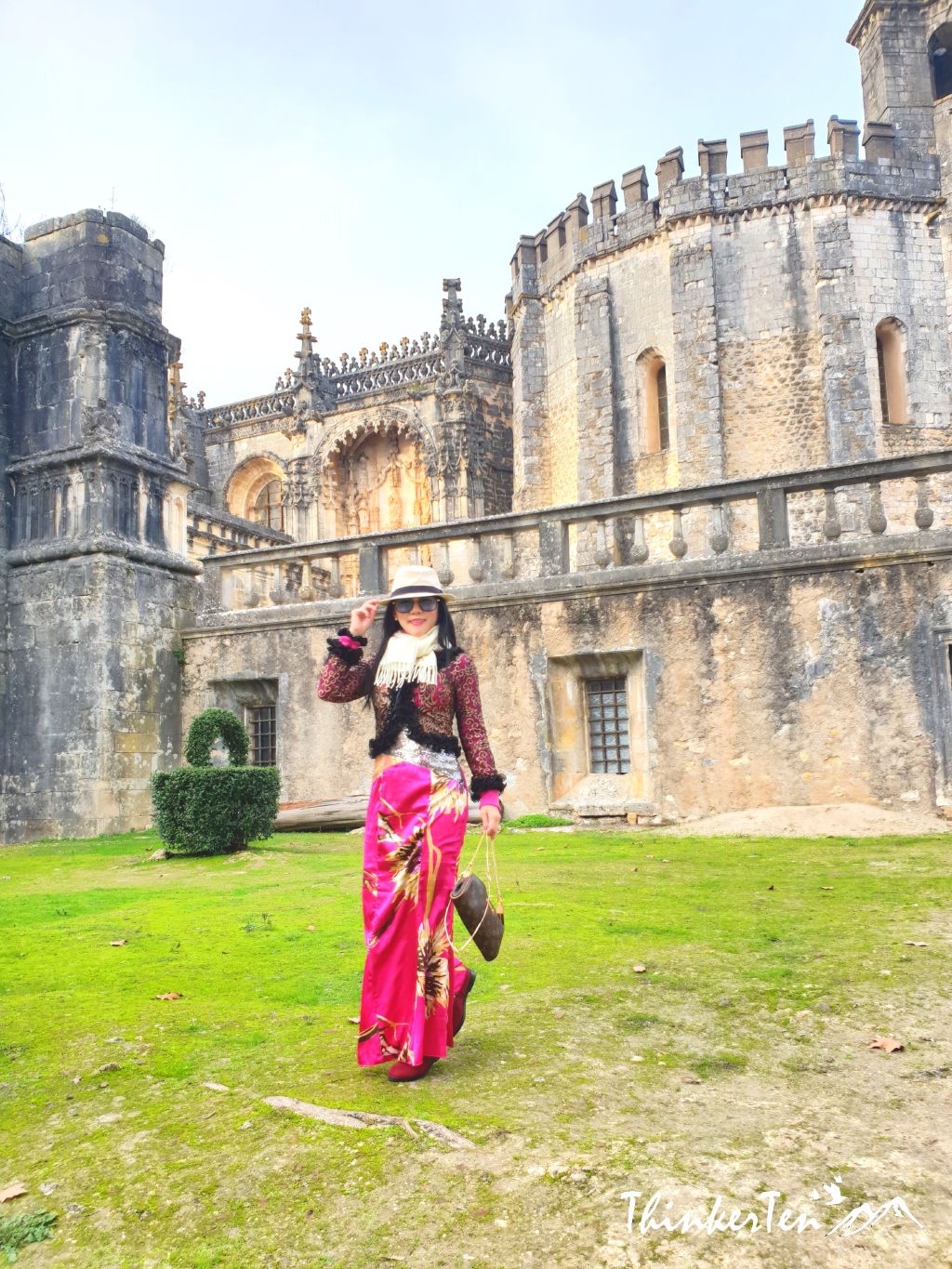 Fatima not a person but a pilgrimage town in Portugal. Top things you need to learn before you visit!

I`ve been to Portugal on a long weekend break but this was to the beaches, seems I missed alot, I`m planning my easter vacation and your post has given me an exact idea where to go.
thanks so much for sharing.

I wish I could some beaches in Portugal too but my time there was too short.

This place is gorgeous! It looks like a photographer’s dream! I would love to see this in person one day!

this looks like such a cool place! i am dying to take a trip to Portugal 🙂

Wow this is absolutely beautiful. Thank you so much for sharing all your stunning pictures with us.

This looks like such a great place! I’ll definitely be adding it to my bucket list & will be visiting this place the next time I’m in Portugal.

This place looks great and only about half an hour drive from Fatima. Good to include Tomar if you are in Fatima.

This is a gorgeous place I would like to visit one day!

The architecture looks amazing. I didn’t know this place exist in Portugal so thanks for giving me an idea. We will be going for a pilgrimage in Israel this year though. That I am really excited!

Glad to hear that you are going to Isreal this year. I have heard about the pligrimage tour in Israel and it involve some camel riding to check out the first sunrise.

“THE CONVENT OF CHRIST IN TOMAR CITY, PORTUGAL” is such a beautiful place with the mixture of old constructions and greeneries. Absolutely love the post!

The greeneries makes the place look really good in the picture. One tip to share is to wear something pink or red to stand out.

Portugal is a beautiful place! Everywhere you’ve been to looks amazing in photos.I bet it is more amazing in person

Portugal is beautiful country and I love their sea history and how affordable this country is.

wow what a stunning day on your trip!

Portugal is an incredible looking place. I have certainly got to visit and I was never really sure about Knights Templar. I have heard of them but never really knew what they were about.

Oh how much I love POrtugal. This makes me want to hop on an airplane and be there right now!

The architecture is pretty amazing. I’d love to visit Portugal.

Do remember to check out the window as it is decorated with a lot of sea stuff. Portuguese sea power is brilliant at that time.

This looks like amazing place to visit. Portugal is in our bucket list from last 2 years. We would love to visit this place asap

This place is so gorgeous, love the architectural design, would definitely love to visit hee some day

Portugal is one of my favourite countries to visit. The Convento de Cristo Castle dominates the skyline over the city of TOMAR and can be seen from almost every corner of the city. Built by the knight’s Templars in 12th Century it is a stunning example of Manueline Architecture and is one of Portugal most important Historical monastic Monuments. I loved the ‘Window of the Chapter House’ (Janela do Capítulo), which is a magnificent example of the Manueline stone sculpture of this time.

For me, I am glad to learn about Manueline stone sculpture and the Manueline style of architecture.

Wow, this looks like an amazing place. I like the fact that people dress up in the uniforms from a long time ago. Could you try on the clothes too?

No there is no costume for you to try on, in fact, you could not spot any Knight Templar but only stray cats and dogs.

I am learning so much about Portugal and its history. I had not heard of this place but if I get to Portugal, I have another place to add to the list of places to visit!

Tomar is a small city but glad I have visited to check out the Unesco site. I have learned so much about the Knights Templar history.

The Templar Church looks absolutely incredible! It looks like you’re having a wonderful time in Portugal!

It is indeed cool as it is a castle wrap in a church inside. Something quite unique and built by the Knights Templar and owned by them too.

WOW the history here you have shared is amazing and so beautiful. I loved looking at this.

Looks like a beautiful place and I would love to visit here. Thanks for sharing.

The post is so nicely written that anyone will fall in love with place. Btw, your dressing sense is really good. I am looking forward to buy sth for my wife 🙂