Japanese love Indian food and one of the cuisine you should try while in Japan is the Japanese version of Indian food. I was quite surprised to find out how popular Indian Ryori/Indian cuisine was in Japan when I first came to Japan as a student many years ago.

The Indian curry restaurants that I went in Kyoto after my visit to Kyomisu Dera is a small independent shop run by people from Nepal and India.  Usually, Nepalis run Indian restaurants because Indian food is more popular than Nepali food. I think the waiter in the restaurant is a Nepali as his skin are quite fair. 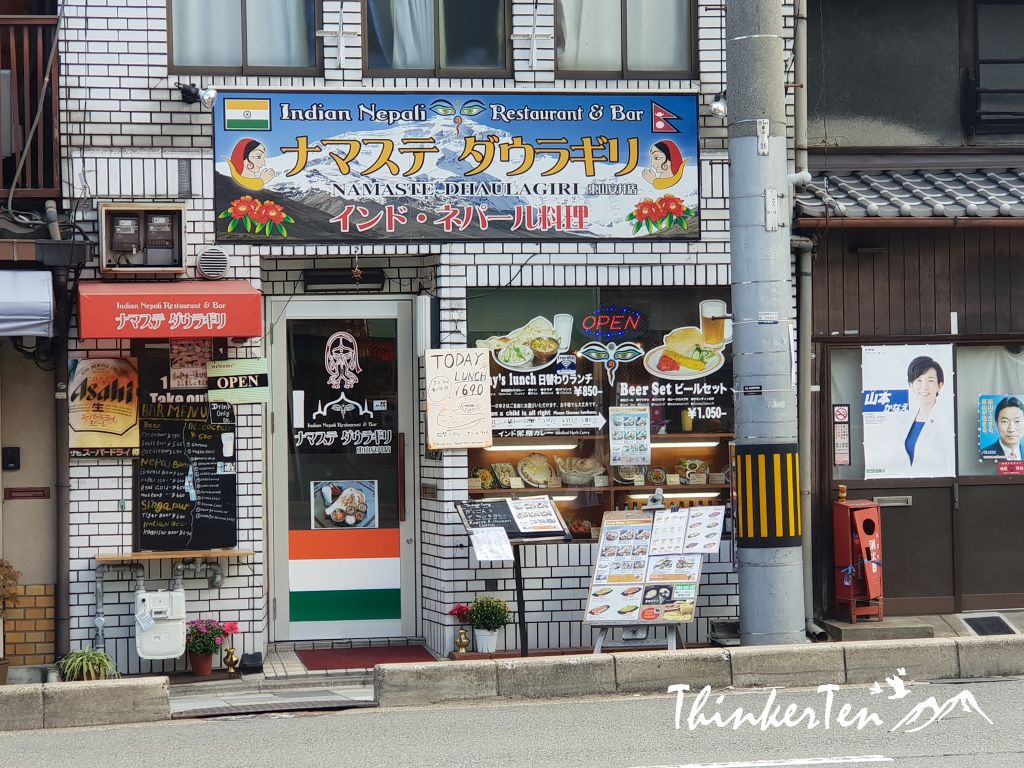 If you are not sure what to order and unfamiliar with Indian cuisine, the safest way to order is ordering their set meal.  The menu usually contains a few types of set meal to choose from. It is also very good in value as it has all the popular items included, such as naan,  few types of curry and tandoori chicken. 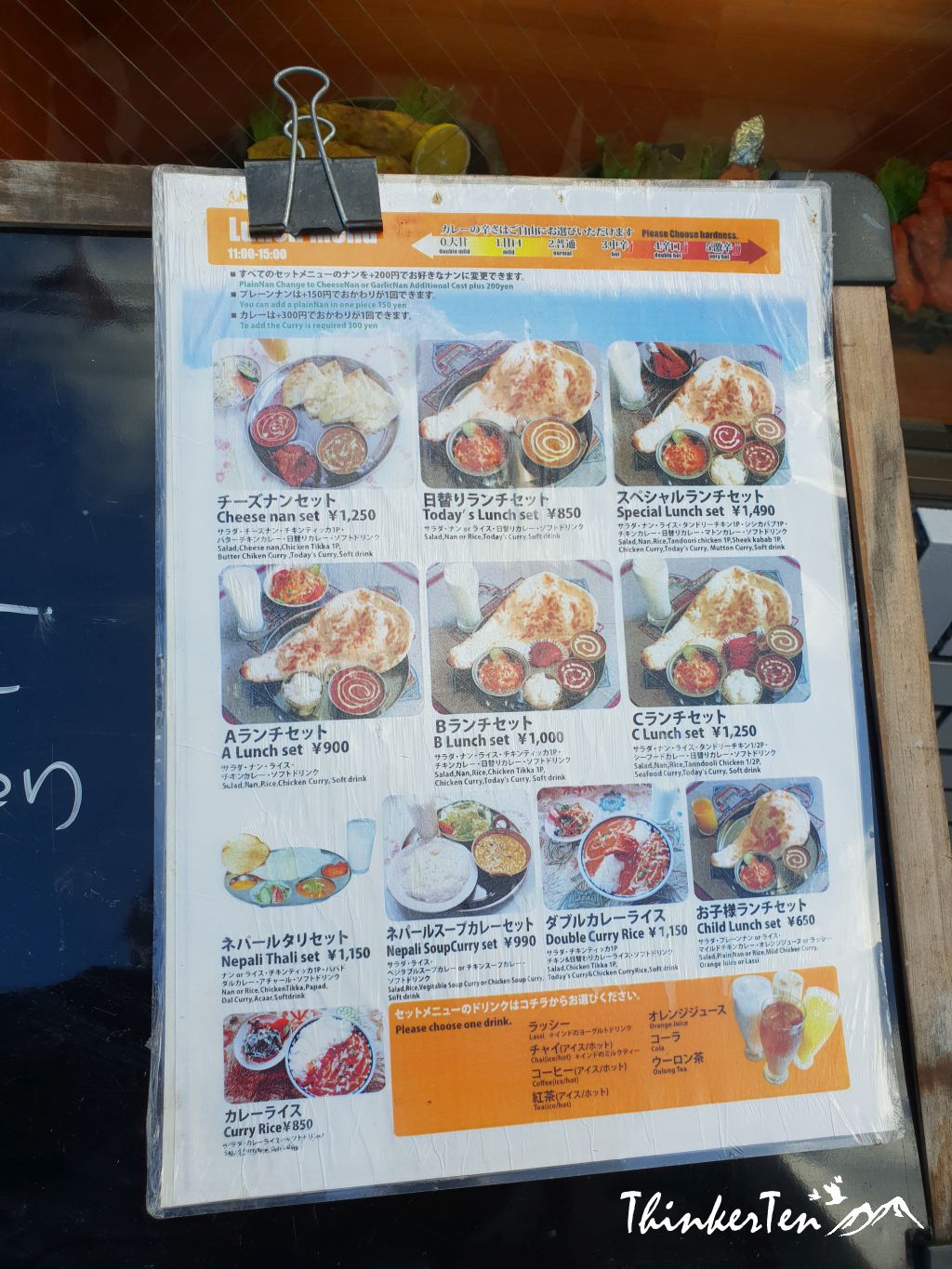 How hot you want your curry to be?  1-10 spiciness

When you order the meal, the waiter will ask you how hot you want your curry to be, indicate from 1 to 10 times.  Japanese people cannot eat too spicy so they usually order 2-3 times level of spiciness but people from South East Asia countries like us would prefer to have 8-9 or up to max 10 for the level of spiciness.

If you are vegetarian, the Indian restaurant is the right place as it also offers vegetarian dish and you can just dip the naan with the vegetable curry. 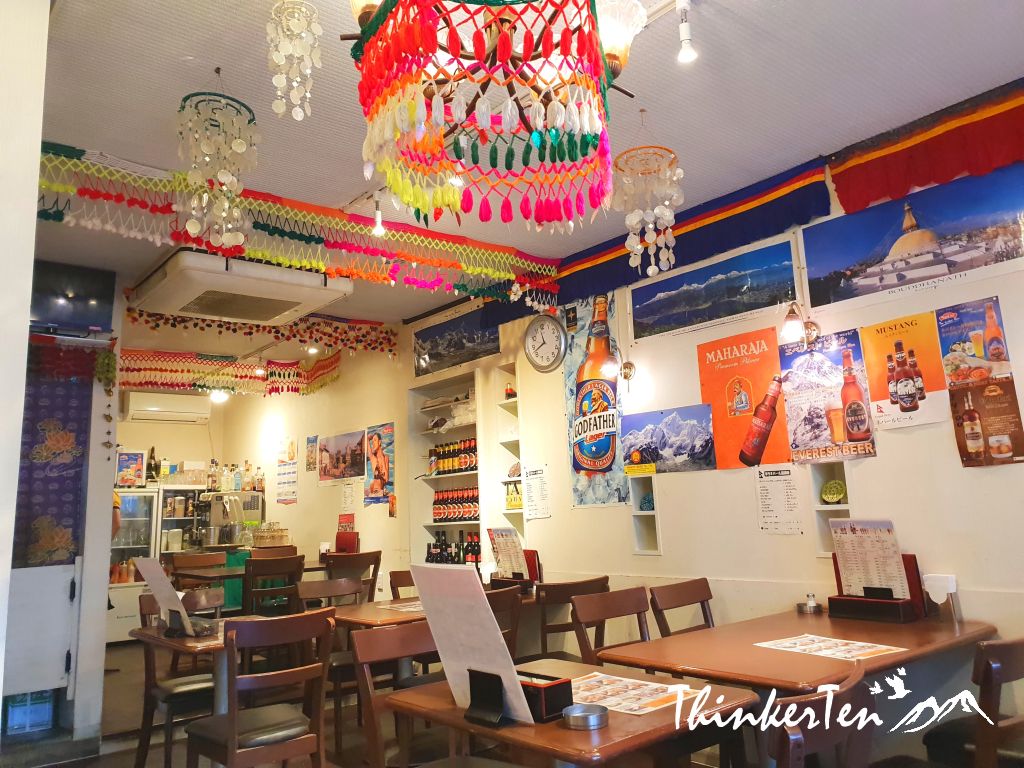 The Indian and Nepali restaurants are small but very cozy. Traditional music can often be heard in the background and the interior has some posters of Himayalan mountains or Mount Everest.  Sometimes the restaurant has an open kitchen where you are able to see how the chef tosses the naan bread.

For naan bread, there are several options to choose from; such as butter, garlic, sesame seeds, and sweet but plain naan works and tastes best.  By the way, the naan tastes sweet even is the plain one.  The chef who makes the naans are Indian or Nepali as I can see them tossing the naan at the kitchen. 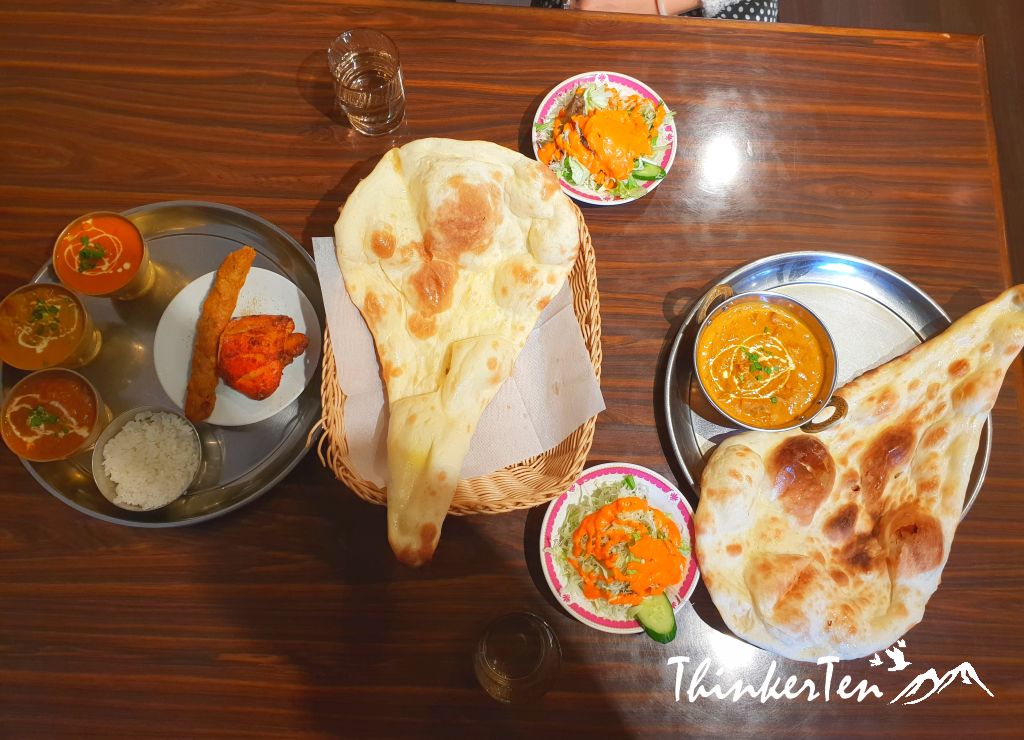 Just like Japanese Chuka/Chinese cuisine, Indian cuisine has adapted to suit the local palate.  Indian cuisine in Japan is never too spicy.  The Indian restaurants are all over Japan, usually run by foreigners; the Nepali or Indian as they are huge population residing in Japan. The menu is usually both in Japanese and English and the most important factors of all are super delicious and budget-friendly. A lunch set usually from 900-1400 yen (USD 8.10 -13.50). Since Indian restaurants are all over in Japan, pop in any restaurant you encounter and experience the Indian cuisine.  You will like it, trust me.

Where to stay in Kyoto? Biwako Hotel Review

omg this post made me soooo hungry! I love indian cuisine. Thank you so much for the review, it is great.

Indian food is a good choice in Japan as it taste good and budget friendly.

I tried Indian food for the first time recently. There’s an Indian restaurant not too far from me. The food was really good though I don’t think I can pronounce any of it.

Suddenly I’m craving garlic naan! The vegetarian choices are delicious and there is a good variety of dishes to choose from.

Dear Dennis,
I love garlic a lot but I ordered the plain naan which tasted super good and went well with their curry.

I have only had Indian food once but I really loved it. I can’t wait to try it again.

I love Indian Food so much!! Didn’t know they loved it in Japan as well

The Indian food in Japan has been tailored to the local liking. It does not taste quite the same as the one in India.

I’ve never had any true Indian cuisine in my life. The food looks very flavorful and worth trying. I know what you mean about the curry. I think in the Jamaican culture curry has a bit more spice to it. Everyone makes their dishes unique in their own way.

I have never tried the Jamaican curry and really love to try one day. I agree everyone makes their dishes unique and that’s how we learn about other culture.

First of all it was a nice review. All Indian food looks really good and tasty and I love everything about that place, their colorful designs and it looks so clean.

Most of the restaurant in Japan are clean, regardless of what cuisine restaurants. 🙂

This post makes me want Indian food NOW. So yummy!!

That looks like a perfect place to eat in Japan if you are an Indian food lover. I would love to try this will def go there.

This is another options to have in Japan, not just Japanese all the time, you could have a change and taste the Japanese version of Indian food.

This looks a good cuisine for any one traveling. I like trying out different food types, and this is the best pick for me.

I love trying out all kind of food when I travel too, trying out Indian cuisine is Japan turn out to be a good choice.

I am dying to visit Japan and now I know one more thing to do while I am there. Try Indian food! Thanks for this

Japan is very affordable now and most things are very budget friendly. One set meal in the restaurant rougly cost 1000yen (USD 8.90) slightly above or below.

I had no idea this food was so popular there! I would love to try it, looks delish!

The naan is so tempting and serving hot!

Oh wow, all of that looks might yummy! I will have to remember this on my trip there!

There are many Indian Japan all over Japan, just go in any one and I am sure you will have a good experience.

This looks so yummy! I love all the sauces they use and the flat bread is just amazing. I’ve had the chance to enjoy a variety of Indian food. It’s always great!

You are right, the different color of curry offer diffferent flavor so it is pretty interesting to dip with the naan.

I love all the scents and flavors of Indian food! You’ve just convinced me what I am having for dinner! yum!

Dear Jacque,
Indian food has so many spices used and I am not really a fan of all the Indian spices but the Indian cuisine in Japan are ok for me and in fact, I love it so much which I have to frequent every time I visit Japan.

hahha you know its funny coz even though i was in japan, i wandered into that indian restaurant almost on instinct & had the BEST butter chicken of my life. Plus the naan was so HUGE and lovely. thank you for this wonderful reminder of that experience.

Glad to hear that this post has reminded you of the good memories in Japan.