The one thing most visitors like to do in Gion is hoping to take a glimpse of the geisha or in Kyoto dialect, they called it “geiko”. They usually dressed in their traditional costume and with a white painted face, a red lip, and special hairdo. 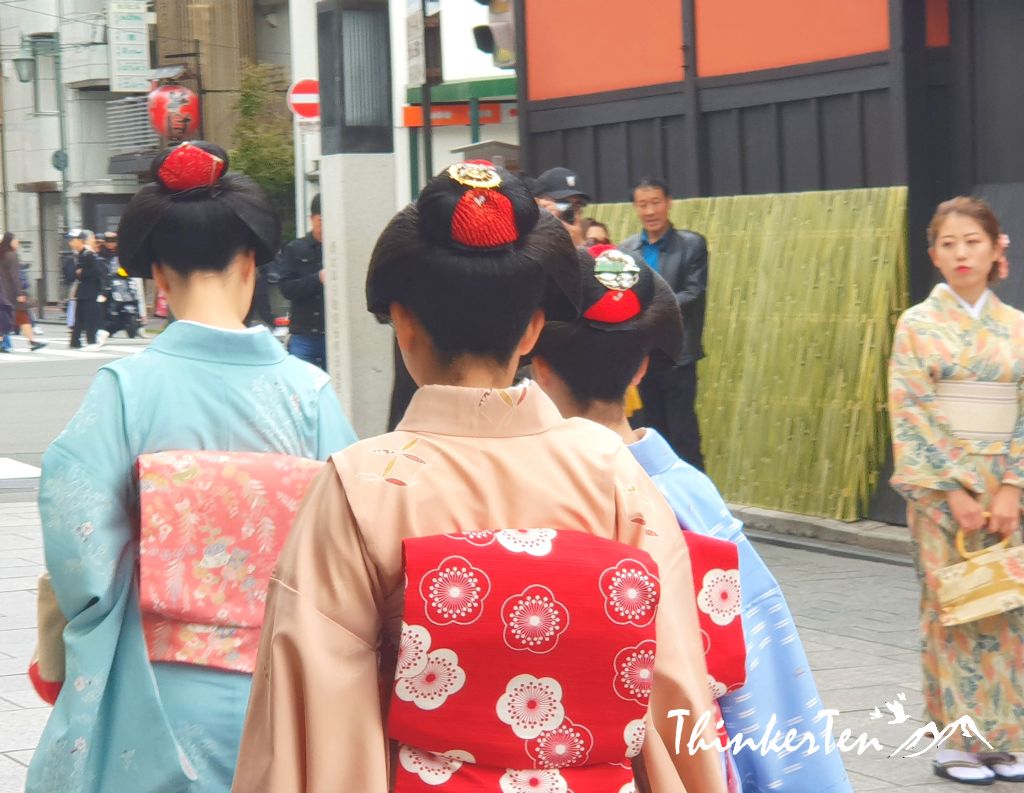 Geisha are highly trained entertainers who sing, dance and played traditional music instruments. They usually entertain guests during dinner banquets and I heard they aren’t cheap to hire. Geisha can be found in a few cities in Japan but Kyoto is the birthplace of geisha. So if you wanted to see some real geisha, Gion District is the place. It is only a 10 mins walk from Kyomizu Dera.

A geisha path is not an easy one and takes a lot of discipline and hard work. A young trainee usually starts at the age of 15, sent away from their family and accepted by the “okasan” (the lady who run the lodging house). First, the young girl has to help to look after her seniors by cleaning and tidy the dormitory, just like a maid job. Then she will become a maiko, an apprentice geisha for a few years where she will learn all the traditional arts, such as dancing, singing and playing the shamisen.  Then at the age of 20, she will turn into geisha. 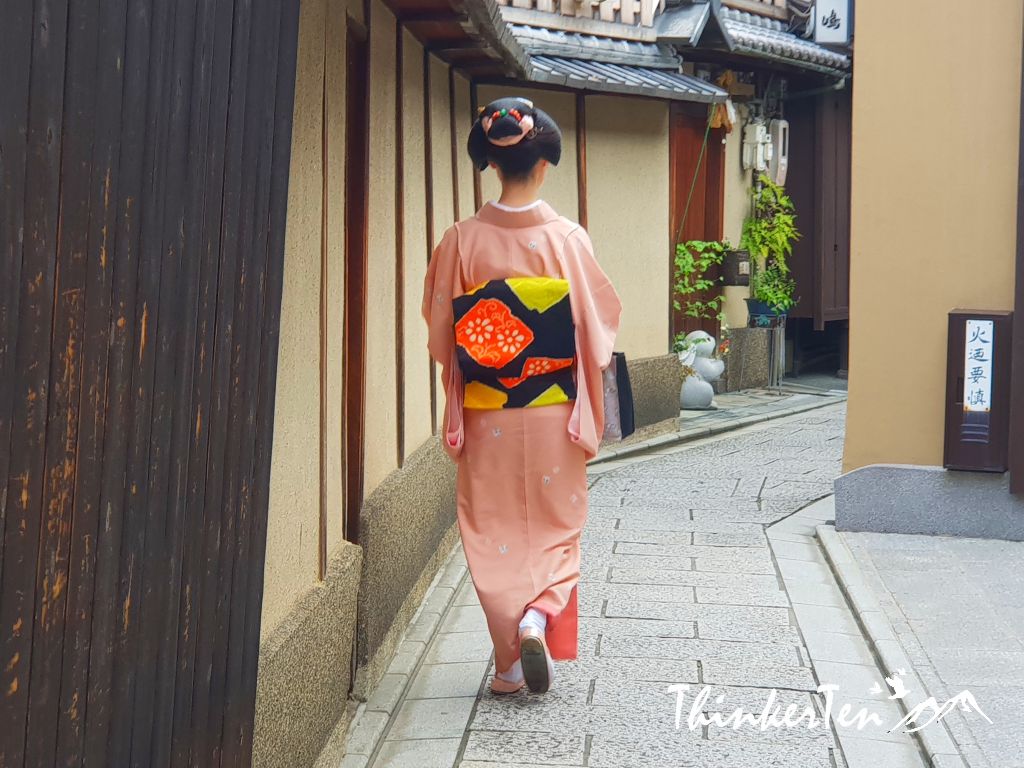 How to tell if she is a maiko or geisha?

Maiko usually appeared with kimono with brighter colors and more decoration on their hair and long sleeves kimono.  On the other hand, Geisha will wear kimono with short sleeves, dull colors and a hairdo with a wig.

A real Maiko and Geisha usually do not stop for photos, you have to hunt them like a paparazzi, which is not really a good thing to do.  If you see a maiko or geisha stops and posing for you, it means she is not a real one, she is just the tourists from other Asian countries, dressed and experience like a maiko. 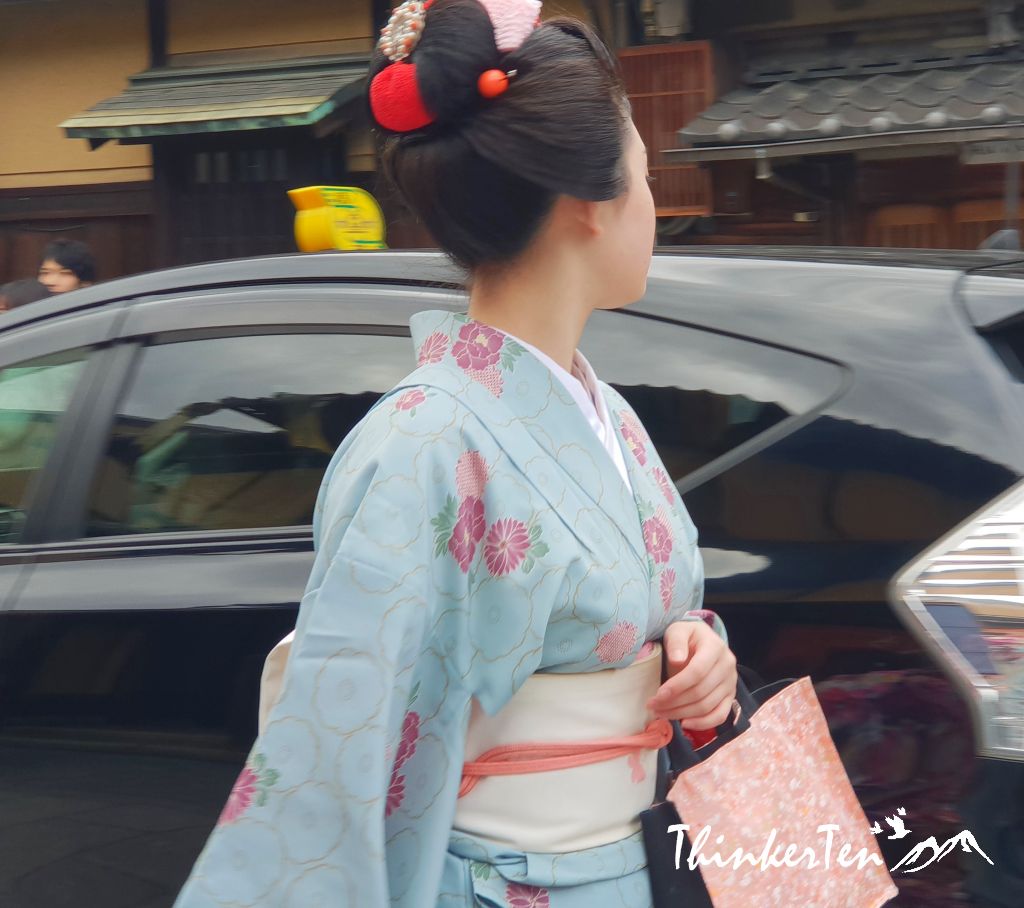 Catch a Maiko show and immerse yourself in the beguiling beauty of these apprentice geisha! Gain some fascinating insight into ancient Japanese customs. Not only you are able to see them performing, but you also get to chat and take photographs with them and observe how they treat their guests. They are able to engage with everyone from different age group and make a personal connection.  The maikos you see on the streets in the day are totally different, they are cold and walk pass very quickly and won’t pose for you to take any pictures of them.  Whereas the maikos at the maiko show are friendly and let you take as many pictures as possible because you paid for their service. 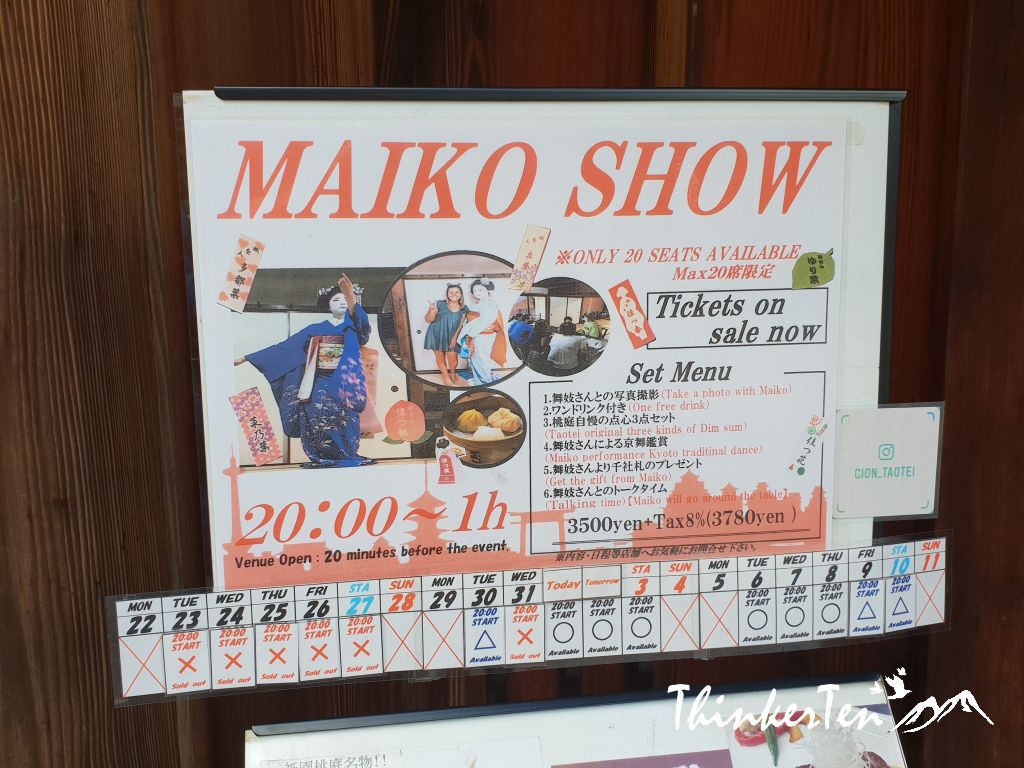 The other thing you may want to do while strolling in Gion District is experiencing a relaxing walk in kimono! There are plenty of rental shops nearby. Go in and choose your favorite color and pattern of the kimono and within 30 mins, you are all dressed up and ready to explore!  The traditional architecture and the tea house of Kyoto are so matching with the kimono outfit. 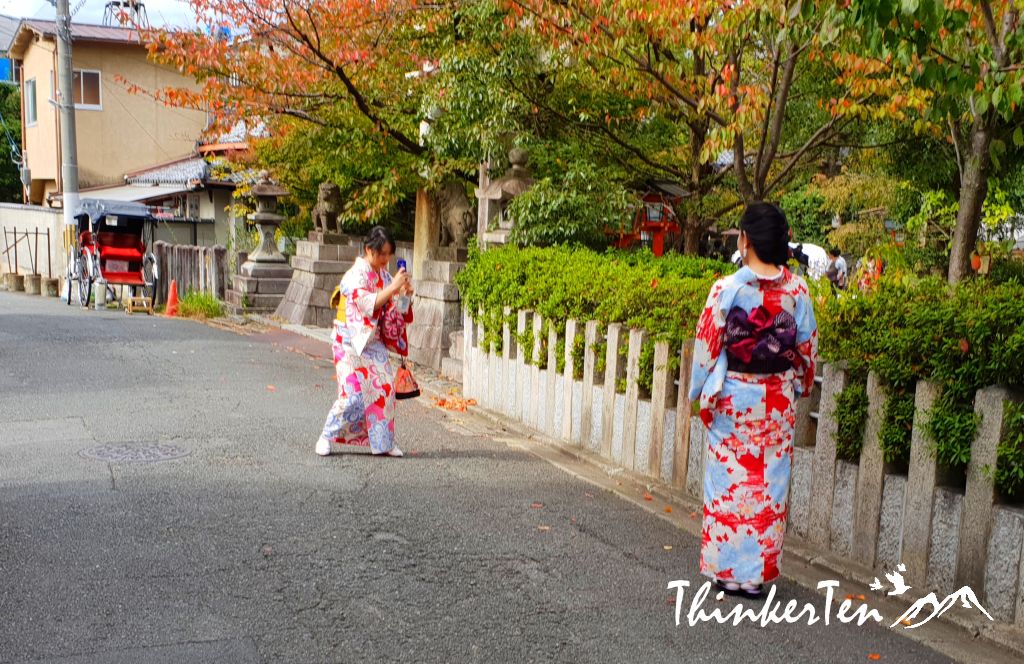 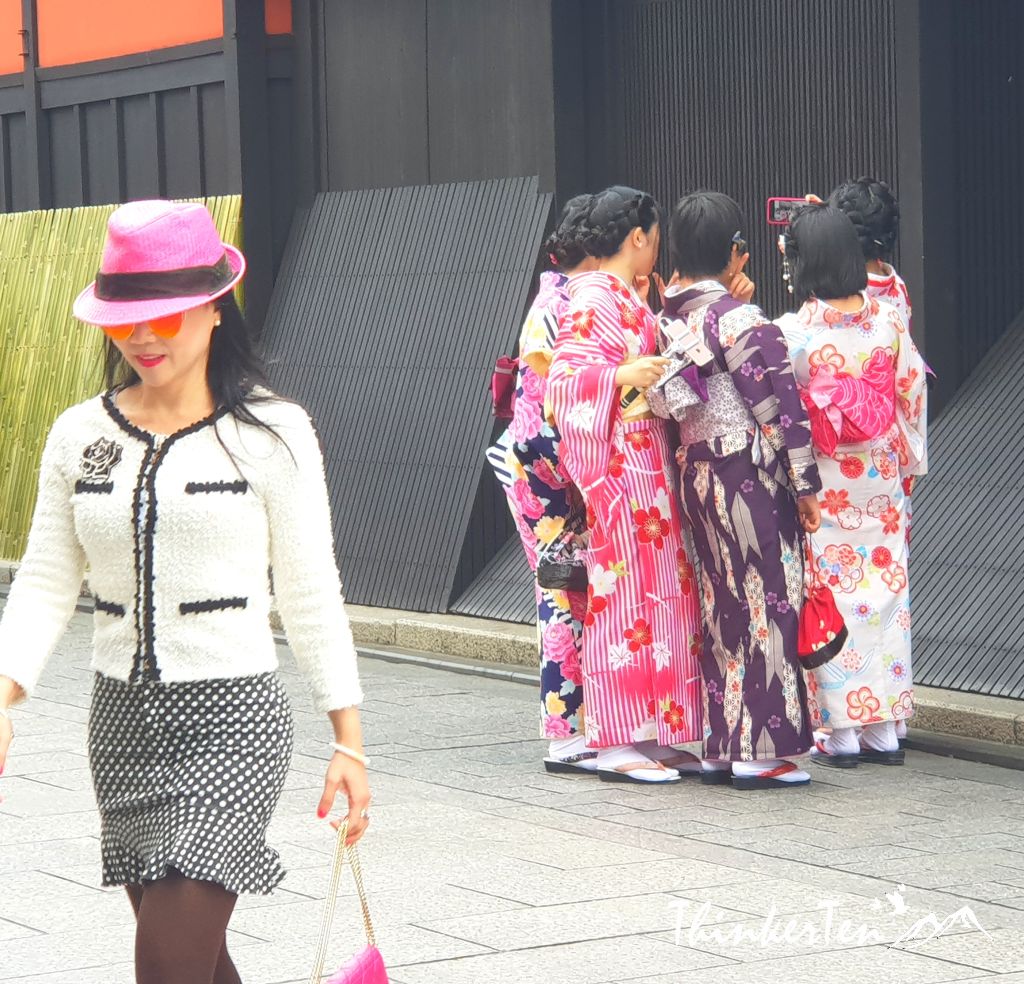 You will likely pass by Yasui Konpira-gu, a small shrine in Gion. It becomes popular among young Japanese women who rushed to the shrine to crawl through a hole in a large ema-shaped stone. The stone is also known as the “enkiri” 縁切り(Separation) or “enmusubi”縁結び (finding a relationship) stone.  It’s where people come in hopes to break off bad relations and form good ones.

This is what you can do, pay for the shrine paper -Katashiro charm and write your name and wish on it. Hold the paper and crawl over the hole, then stick the paper on the stones. 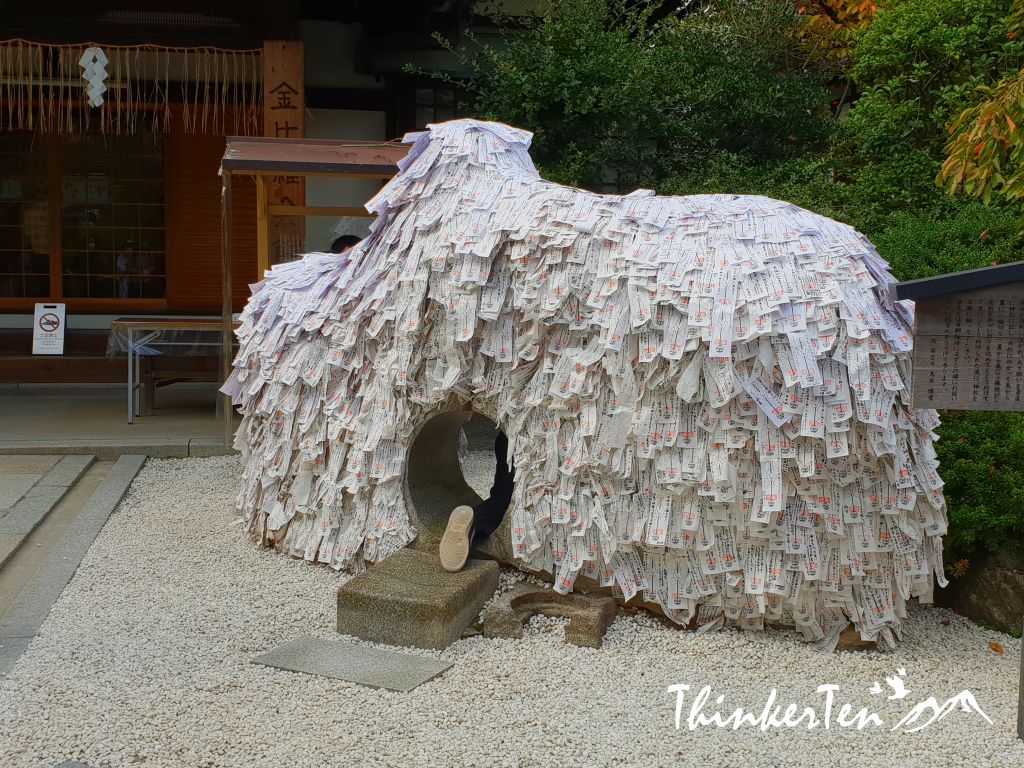 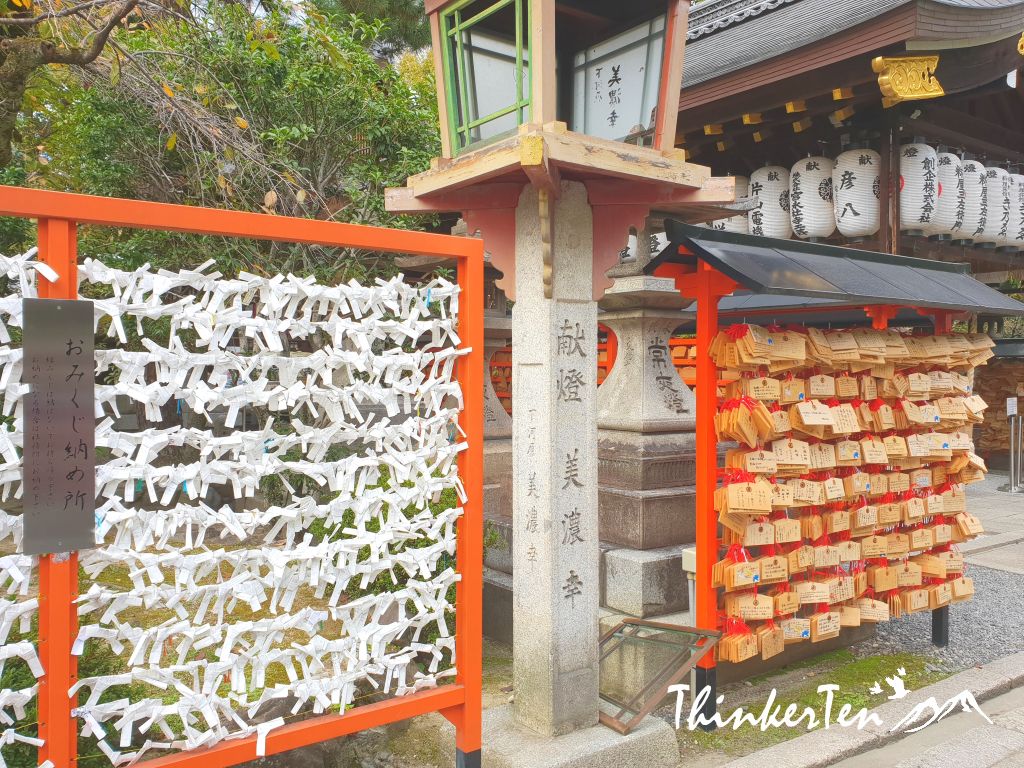 There is a Forever Museum of Contemporary Art at Gion which happen to hold Yayoi Kusama works. Some background of Yayoi Kusama artist, she is the queen of pop art in Japan who has an obsession of dots. The yellow pumpkin and black dots are her masterpieces in 1994. There is also the sculpture of pumpkins with dots in Noashima Shikoku Japan. 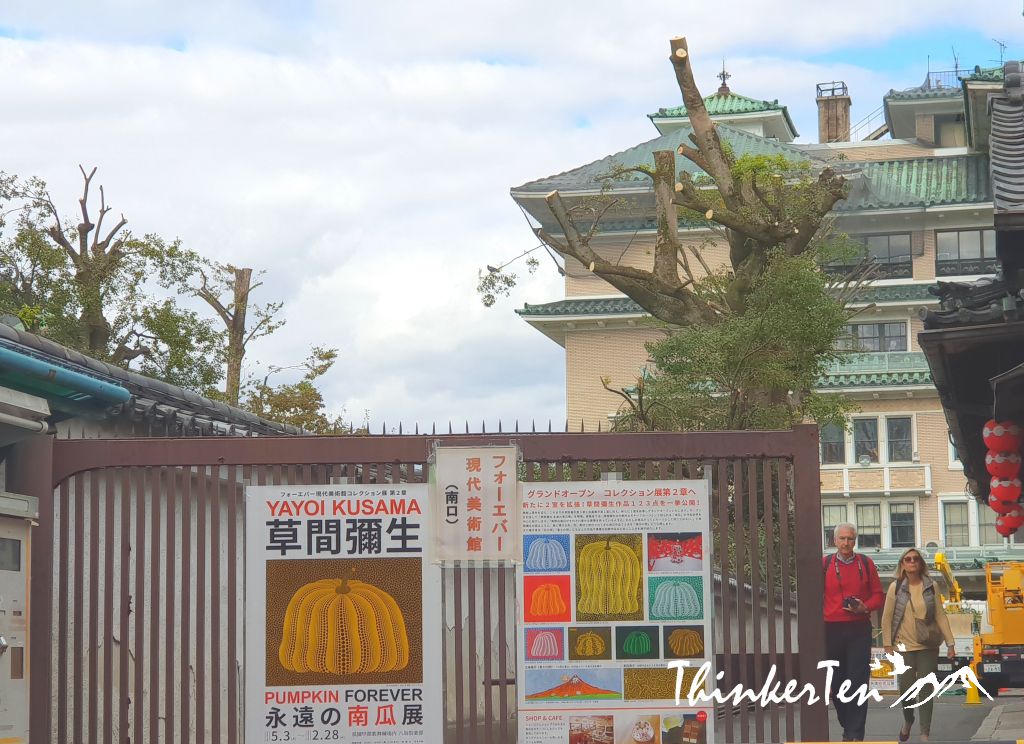 The rickshaw pulled by a man who acts as a guide and tells you the hidden gems and history of the area. If you are too lazy to stroll around, try riding on the rickshaw and explore Gion District. 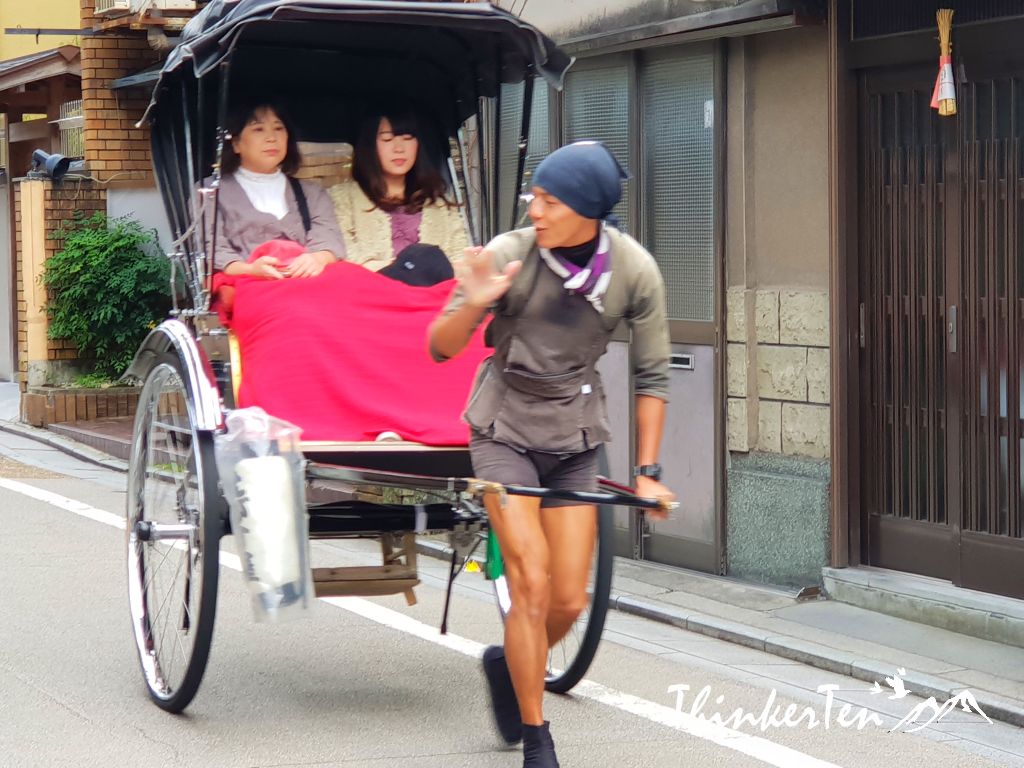 The best way to experience Gion District in Kyoto is in the traditional kimono, you will not feel out of place with the old architecture and tea houses. It is also very likely you will meet some geisha or maiko walking in the alley of Gion since this is the birthplace of Geisha. Do not hunt them like paparazzi but instead, take pictures from afar and not disturbing them. 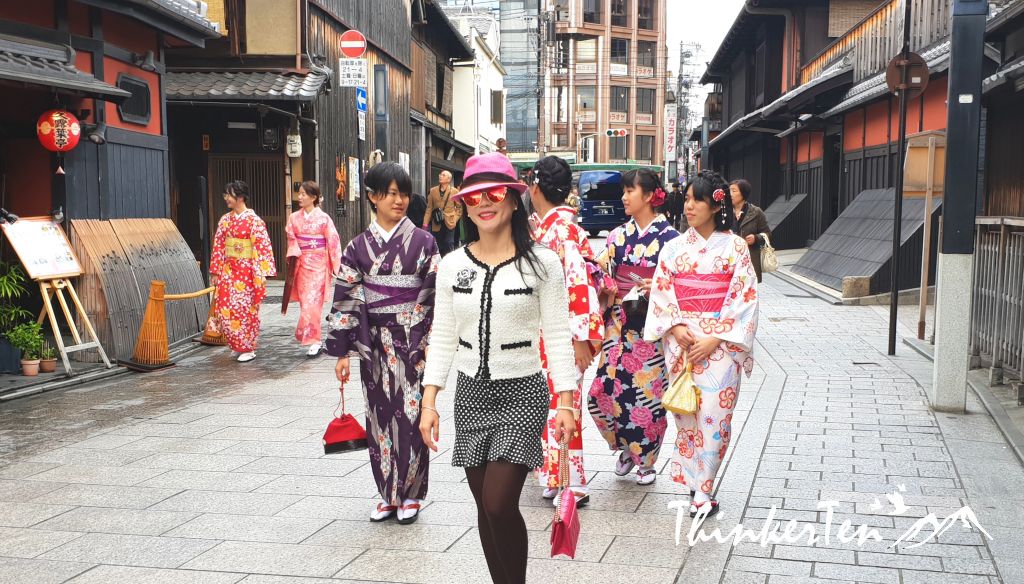 Explore Kyomizu Dera in Kimono is a perfect match for your Kyoto experience!

Looks like such a great experience and it’s really nice to know the difference between geisha and maiko. Never knew about that.

Maiko are usually younger and prettier, on the other hand, geisha is matured and wore a wig instead.

Looks like such an amazing place to visit! Your photos are stunning!

this is all so interesting. I don’t know much about geishas – great info!

Dear Danielle,
Gion District is the birthplace of geisha and you will see many real and fake geisha walking up and down this district. Fake geisha can be tourists which wanted to experience and dress like one. They usually will pose for other tourists and smile. Real geisha walk passes very fast and does not have eye contact with the tourists at all.

This would be so neat to see. I always love seeing the ladies in kimonos. They are gorgeous!

Dear Amber,
The young ladies in kimono are Japanese girls, probably from their high school having a good time wearing their traditional costume and stroll around in this ancient district.

Kyoto is the city par excellence of tradition and perhaps this is why I think it is among the most beautiful, most real and characteristic cities of Japan!

I totally agree with you, Kyoto is one of the oldest and sometimes called the thousand-year capital (千年の都).

Those dresses are so pretty. This would be a fun place to explore

I’ve always wanted to see some geisha! They look incredibly beautiful in their kimonos. I’d like to wear one myself, too! 🙂

The young girls in their kimono are not geisha. Geisha or Maiko has the big hairdo (like a big helmet) and their faces and neck usually painted all white.

I’ve never been to Japan! But kyoto is definitely on the top of my bucket list. Great post.

You are right, Kyoto is a must when you travel to Japan because you see a lot of old tradition here. Kyoto is also cheaper than Tokyo, the capital. Both cities can be connected with Nozomi bullet train within 2.5 hours.

Geisha tradition has always intrigued me and I want to one day visit Japan. This is very interesting and seems like a beautiful place to visit

Maiko or a trainee geisha completes her apprenticeship such as calligraphy, flower arrangement, tea ceremony, a variety of traditional musical instruments, song and dance. Very tough life and in her evenings are then spent entertaining at teahouses.

Great photos and good advice. Have only stopped over in Japan briefly would like to go back!

I am sure you have already having a taste of Japan. I believe you will crave for more.

I have seen the movie Memoirs of a Geisha and from there, I developed quite an interest in their tradition. I love their way of dressing and elegance. I would surely love to visit this place someday

The Geisha has become an icon of Japanese culture. The super white painted faces are originated from China as Chinese culture was hugely influential in Japan during the Heian Period. Chinese courtesan took to wearing thick white makeup because it looked better in the light, particularly if they were to perform to or entertain nobles. This was especially important too for Geisha women when they perform dancing and singing for their clients way into the evening and therefore could not rely on natural sunlight. It was incredibly important for their faces to be visible and recognizable. The tradition of the white painted face is still continued till now even we have a good light system.

I love Japan! Actually, I am planning to visit there and this place is perfect. Thanks for sharing.

When you visit Japan, do experience kimono in Kyoto. Kyoto is the best place to wear kimono and walk around.

I’ve always wanted to see a gesha up close. This is such a fascinating concept that I would love to learn more about.

Dear Alexandra,
It is said to be one of the most beautiful parts of the geisha is the back of the neck was shown to make the look more alluring to male clients. The neck and some part of the back are painted white too.

Wow! I love all the pictures. I love knowing about new places. An avid traveler myself, I would love to visit this place.

I hope you get to visit Gion in Kyoto soon. Watch a maiko show to get a close up and chat with the maiko and geisha.

Wow! I’d love the rickshaw ride! And obviously, since I’m so intrigued with fashion, rent or even buy a kimono from Japan!

GESHA DISTRICT looks so good in pictures. I am planning to visit soon. Woww

Even though I stayed in Japan, I didn’t know the difference between Geisha & Maiko. I only know about Geisha, Thanks for sharing these information. I love to stroll around the streets so peaceful and calm.

I really like the hair style and clothing. Japanese culture is so rich in many ways. I can’t wait to visit sometime

Thank you for sharing the differences between geishas and maikos. Oh wao, now I want to know about the so rich Japanese culture.

Amazing place and pictures, thanks for sharing your travel journey. It is always good to know about different places and their unique culture.

These are all very interesting and an amazing place to visit. Thanks for sharing.