When I reached Osaka I wanted to do something different, I don’t want to see the castle or shrines or temples anymore as I have seen quite a few in Kyoto and Nara. So I choose to visit Umeda Sky Buiding. It is one of the unique modern building in Japan which was completed in 1993; consists of two 40 story towers. The architect is Hara Hiroshi who also designed Kyoto Station. So you may find some similarities for these buildings.

Entering Osaka with Our Rental Car

When we arrived in Osaka city, I thought it will be very congested but to my surprise, there weren’t many cars at all near Unemda Sky Building. 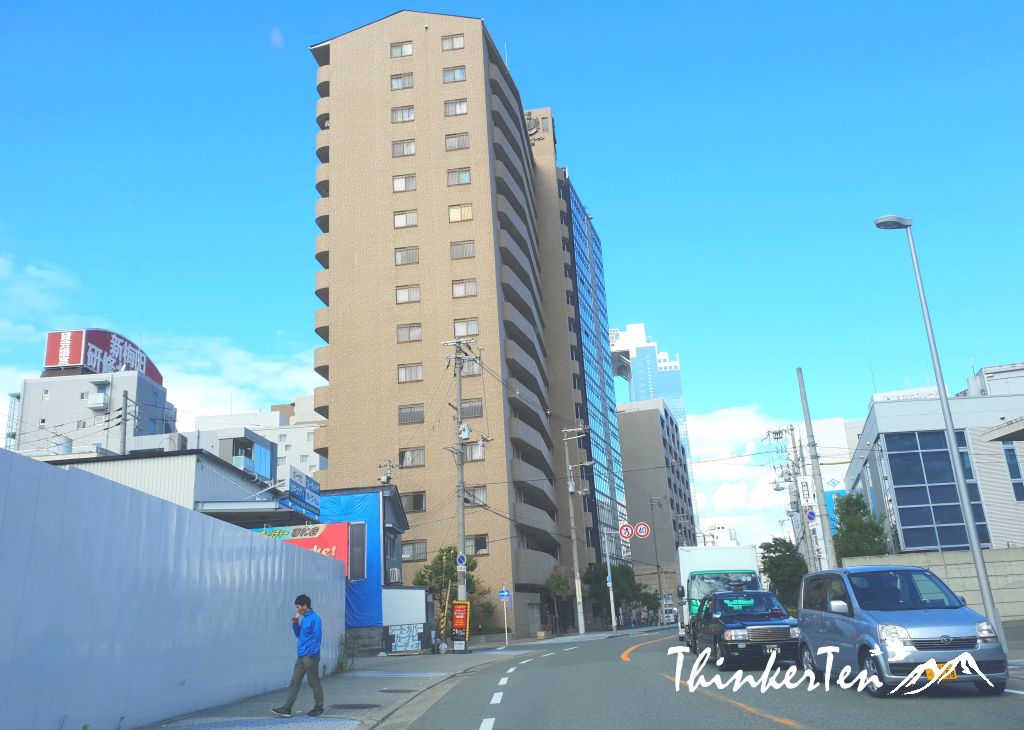 The Elevator will bring you to Level 35 then you have to switch to the glass-domed elevators up to level 39 to purchase the entry ticket.  This glass domed elevator is super unique and super long, feel like boarding a spaceship. 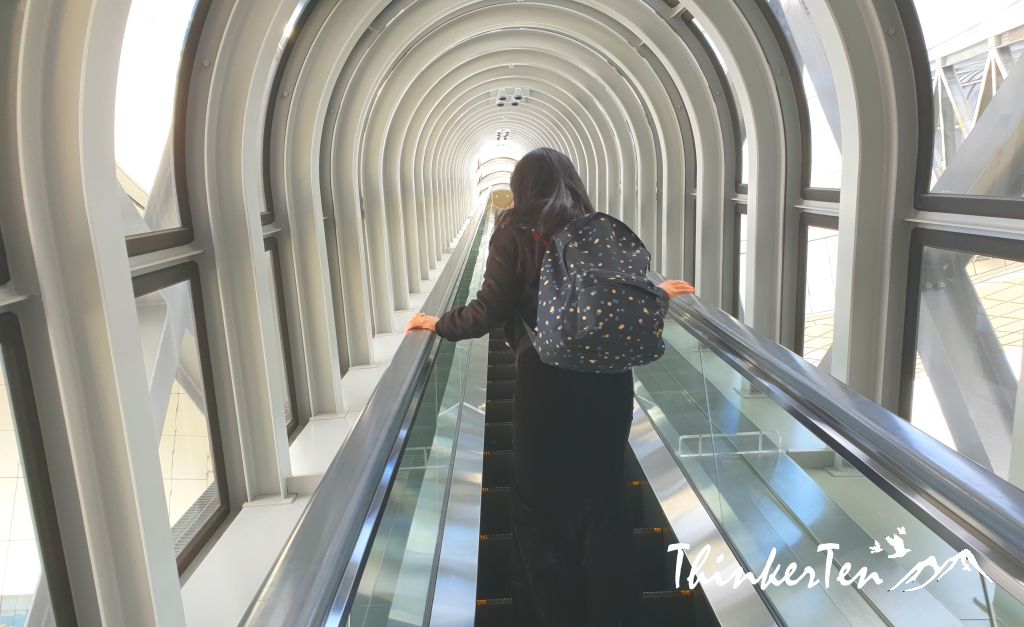 If you don’t want to pay, you can go up to the 39th floor, it is free but there is no 360-degree unblocked view.  Part of the view was blocked.

Purchase your ticket from the machine 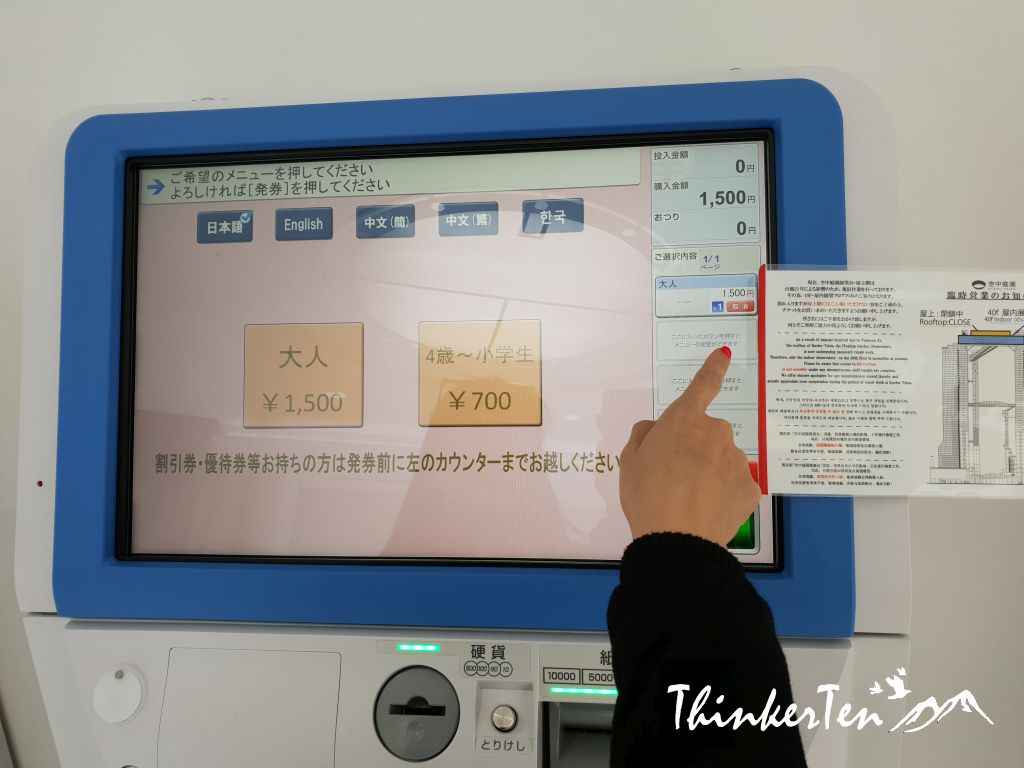 According to the British newspaper The Times, Umeda Sky Building is one of the “Top 20 Buildings Around the World”. The two towers, East and West are connected at the top by the circular Floating Garden Observatory.

Inside, you will see the panoramic view from the top of Yodo river, bridges, the sunset of Osaka city. The Osaka city skyline is incredibly stunning. What amazed me the most is the countless bridges connecting both sides of Yodo river.

Why there are so many bridges in Yodo River?

Osaka’s waterways are very important in the city’s economic history. Until about 1925 there were more than 1600 bridges in Osaka but only 850 bridges remain now, no wonder Osaka has the nickname of “Venice of Japan”

I spent some times counting the bridges from far left to the right.  So many of them side by side in one river.  Do they need that many?  Japan has one of the best infrastructures in the world and their bridges (600,000 in whole Japan ) and tunnels can be seen everywhere in the whole of Japan.  Question is do they really need that many?

Much of the road infrastructure, such as bridges were constructed in the 1960s and 70s.  Maintaining this infrastructure is a big challenge. 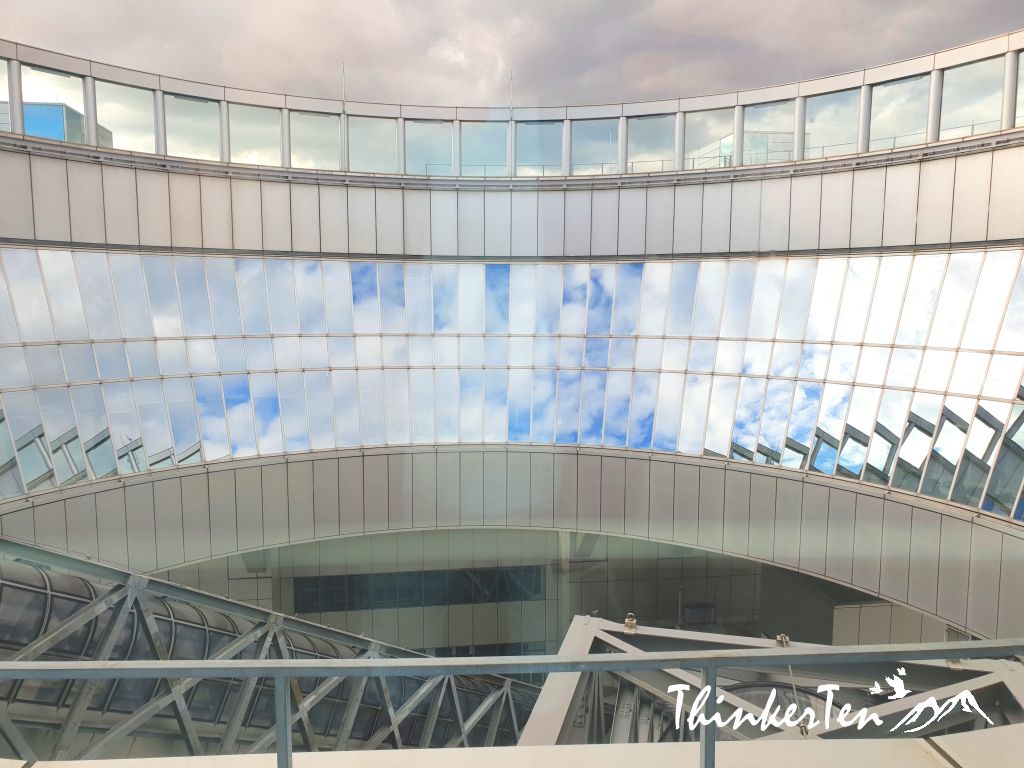 Spotted an area for helicopter deck. (below picture) 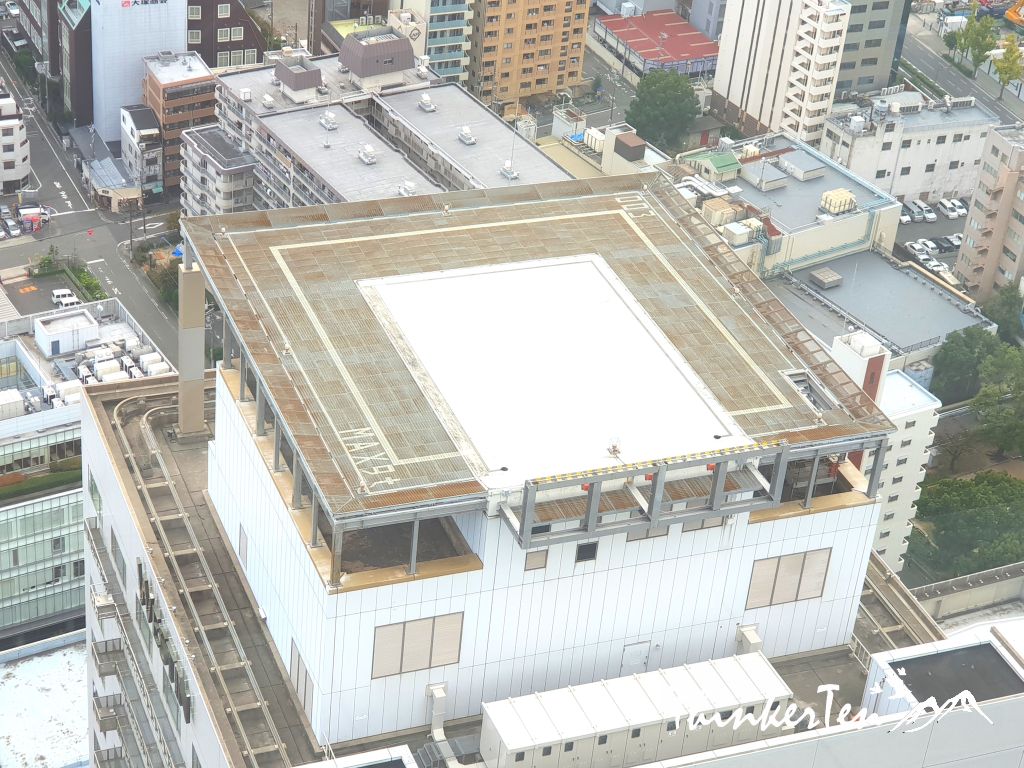 There is a cafe to get some drinks and snacks. There are plenty of spots to sit down or look out in a different direction. 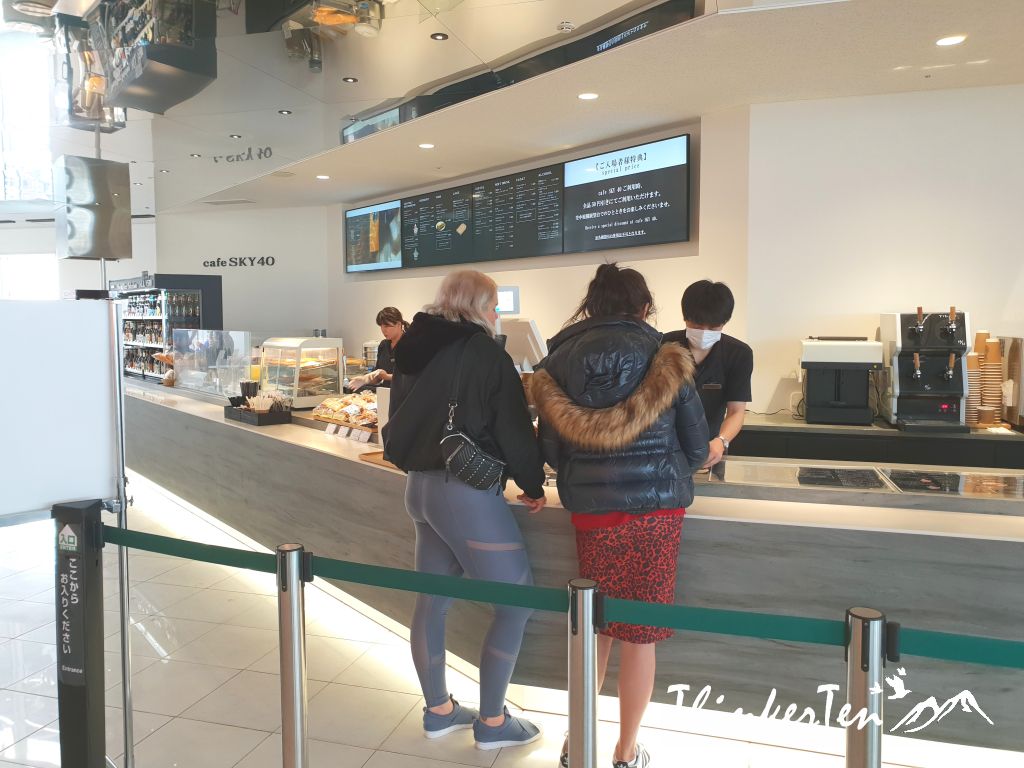 There is a small exhibition room to show you the little model of Umeda Sky Building structure. 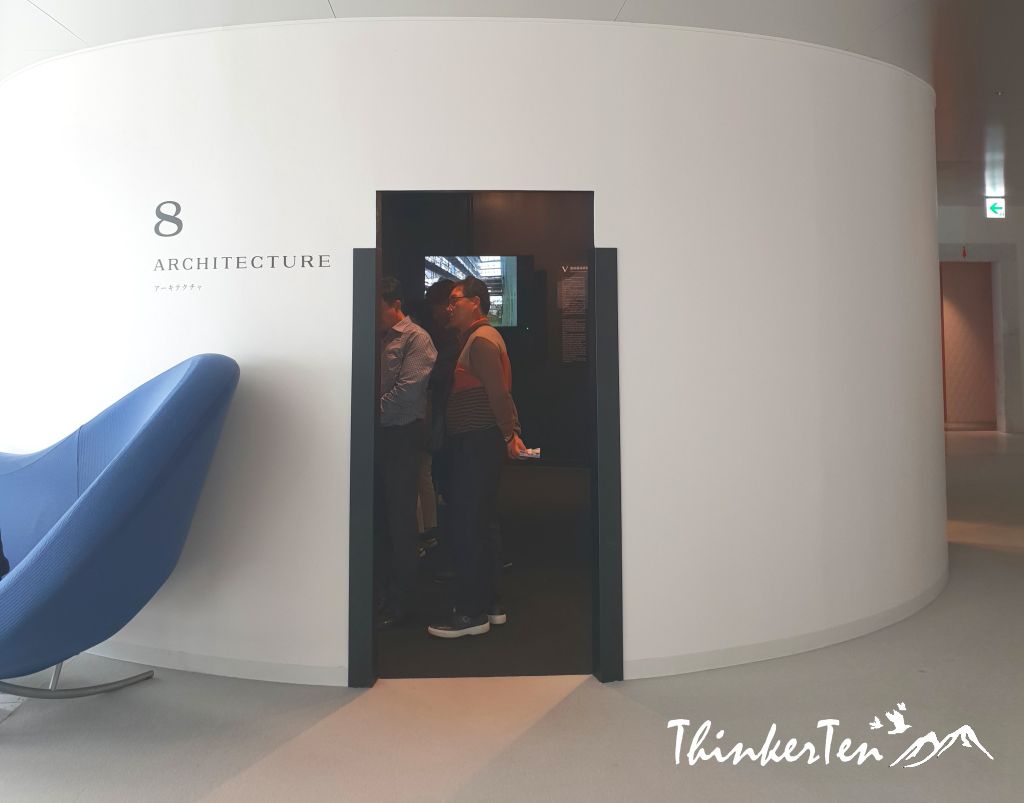 This is how it looks like from the top of the Umeda Sky Building. 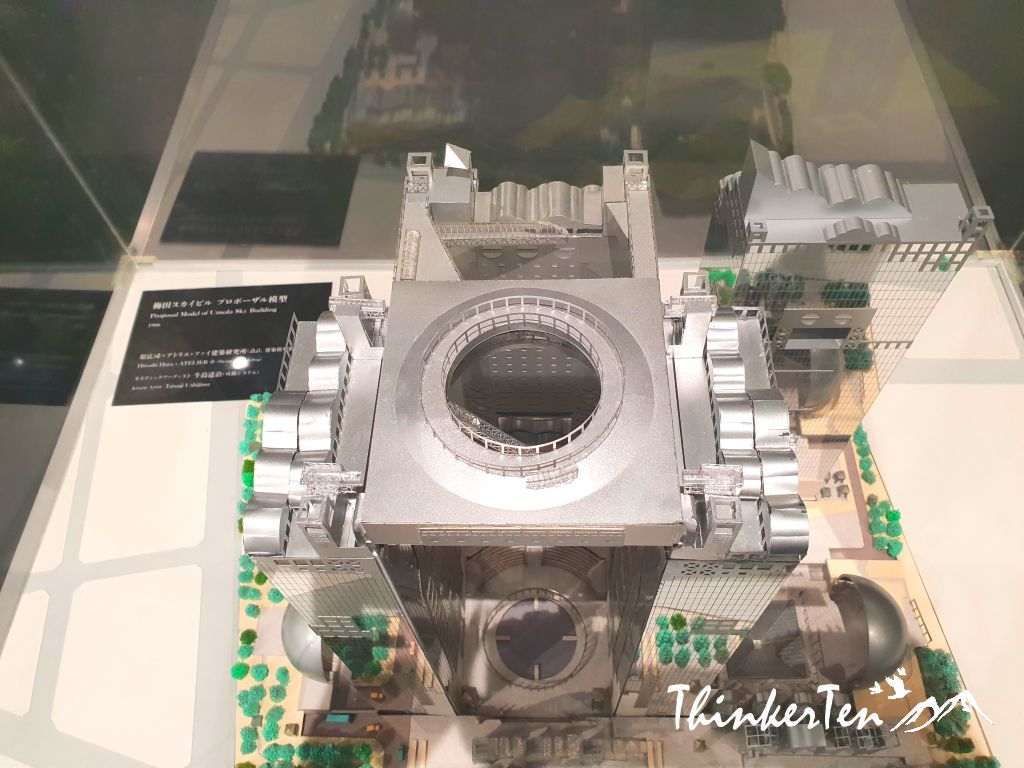 At 173 meter high, the Umeda Sky Building is the 19th tallest building in Osaka, I am quite surprised it is not the tallest. However, it still has one of the most stunning skylines of Osaka. The building is used for office space. 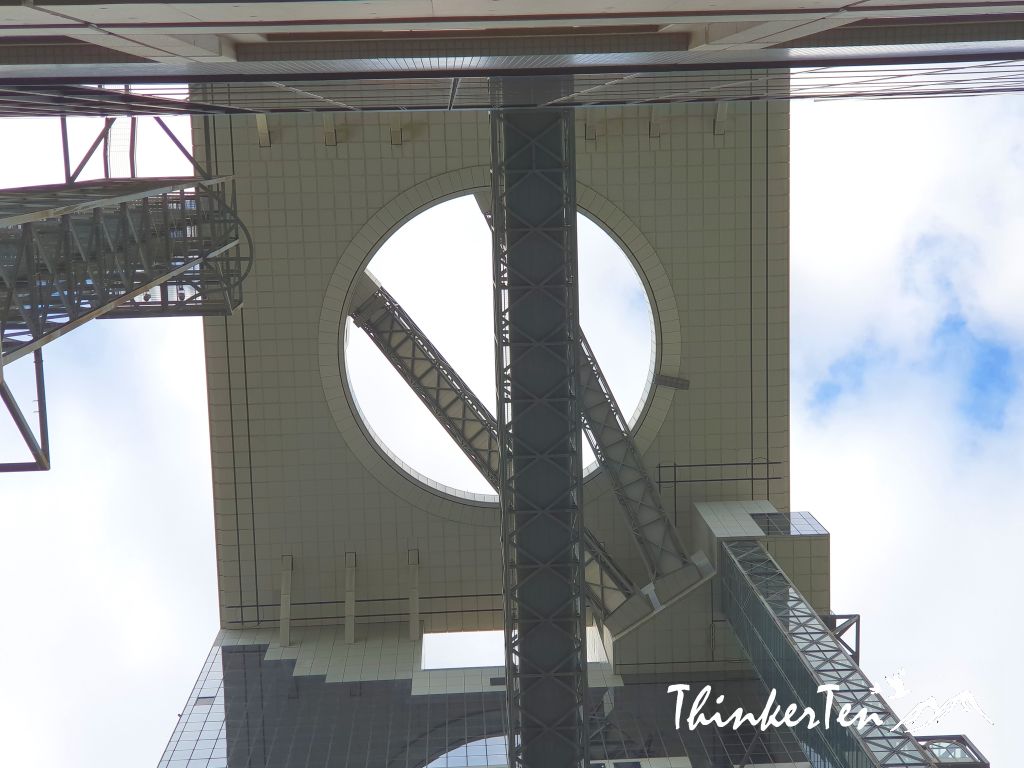 Get your souvenirs here if you need to buy something. 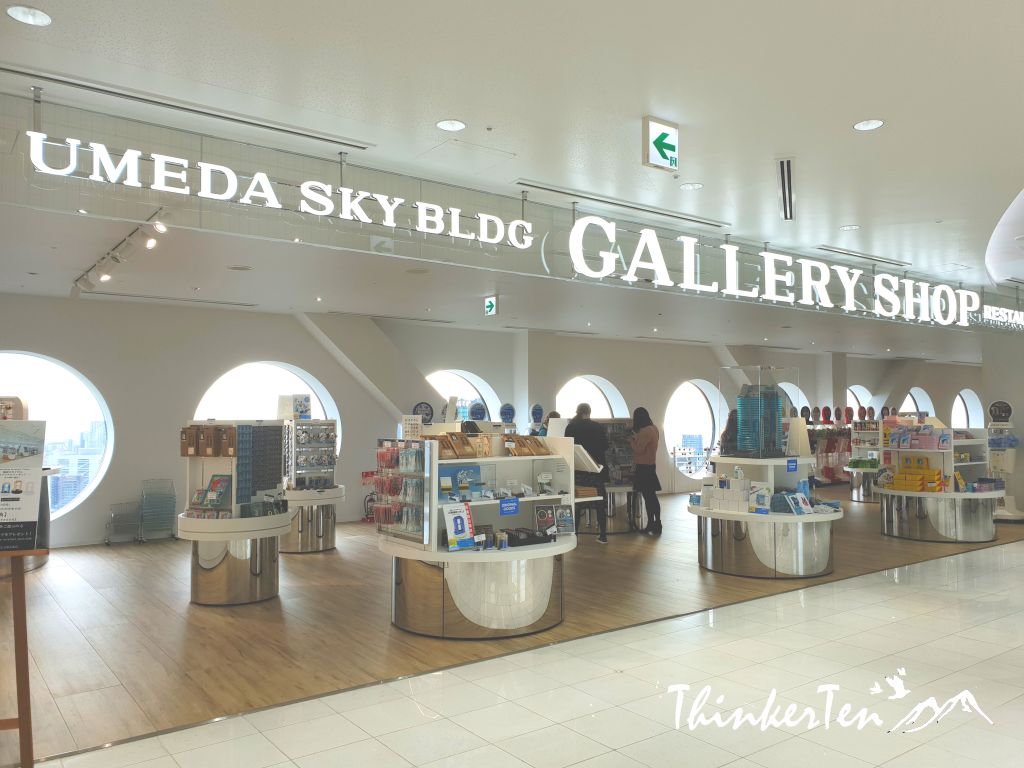 Catching the long capsule down to the 35th floor then switch to lift and go down to the parking lot at the basement. 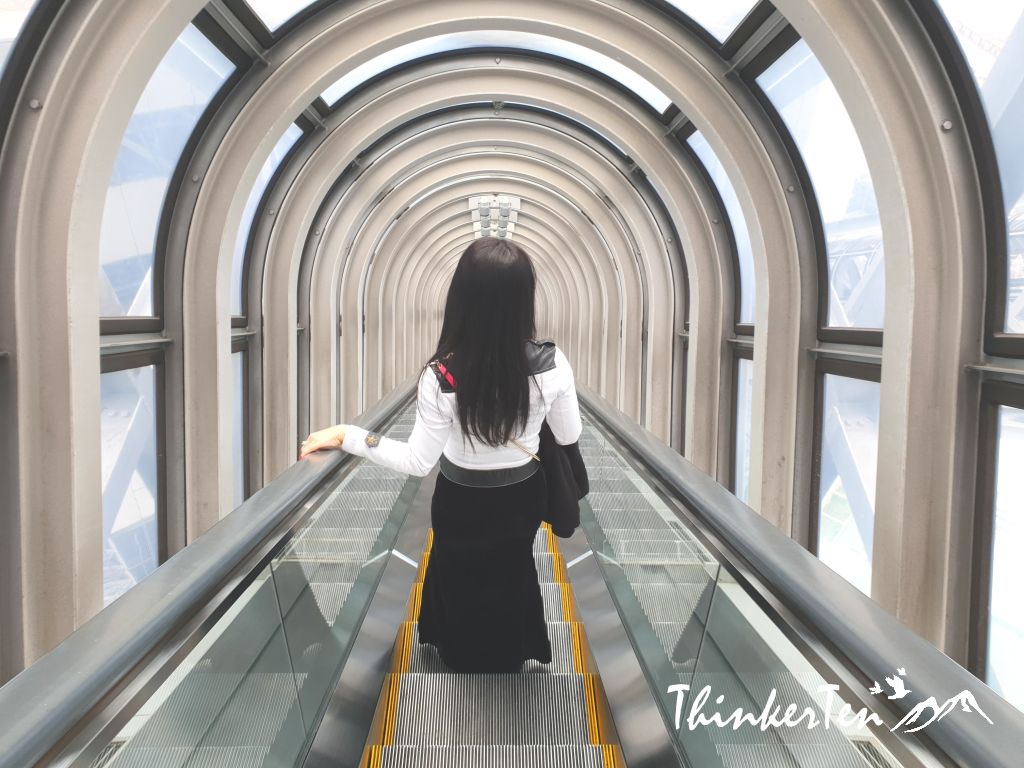 If you wanted to check out the skyline of Osaka city, Umeda Sky Building is a good choice.  Go up to the 40th floor and enjoy the open-air sky garden.  The wind can be very strong so please be prepared.  Oh yes, the “glass domed elevator” is an interesting ride up too.

I have a good look at the infrastructure from the top and most importantly it made me wonder why there are so many bridges in Yodo river?  Seriously I think there are overbuilt. 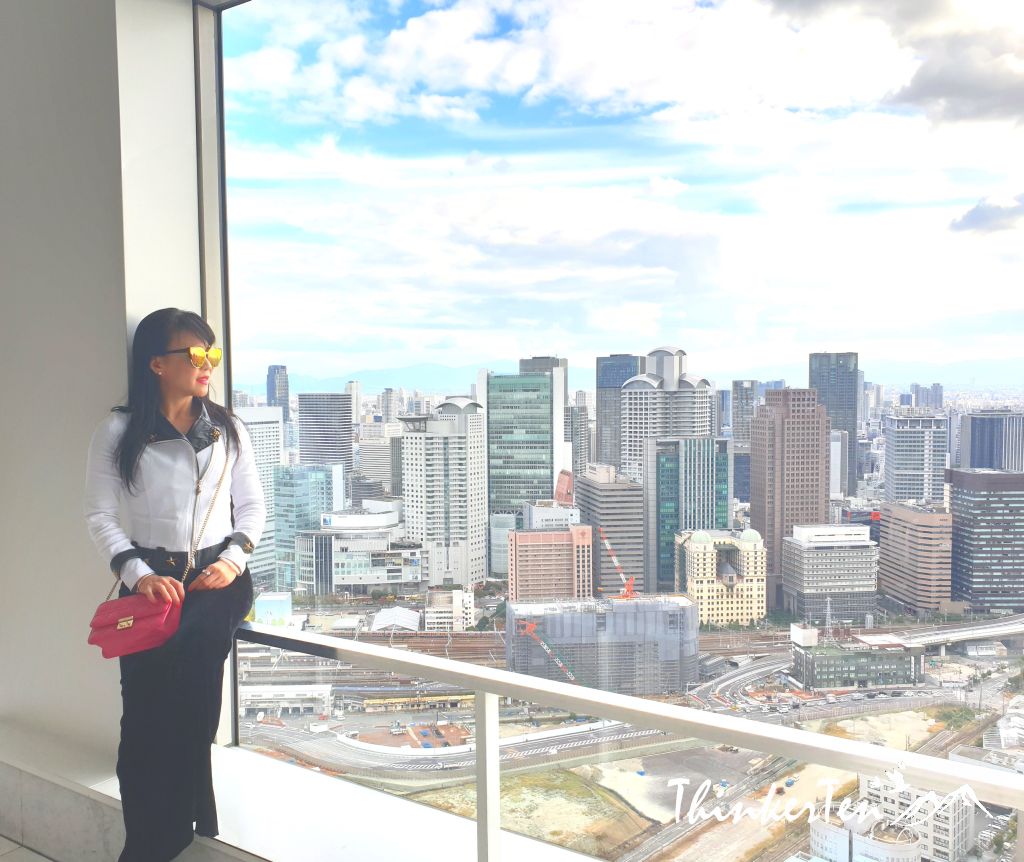 Kansai Top Food: Okonomiyaki Review お好み焼き- Grilled as you like

How to rent a car in Japan? Touchdown from Hiroshima Airport

That looks so amazing. I would love to get up there and take in the view one day.

I love architecture, so cool buildings are kinda my jam. This one looks so unique and being able to enjoy that view??? YES, please!!!

When I travel I do love to go and see the panorama of a city from an observation deck. The rooftop from Umeda Sky Building looks amazing and you were lucky to visit on such a sunny day. Interesting to learn about the infrastructure of Japan and how they have so many bridges over rivers.

You are right, the weather is good and the sky is clear when I went up to check on the Osaka skyline. The only downside is the open air garden was closed for maintenance due to the recent typhoon Jebi.

looks beautiful! Osaka is such a lovely place the high up places (and not)

The photos are just so beautiful! This I think is a nice place to visit. Thanks for sharing.

This place is a must! this will surely be added on my bucket list. thankyou for sharing this

The more I see of Osaka the more I get amazed. Nice reading your post.

I still get amazed of all the structures we have built in the last century. This is no exception! It reminds me of being in airplane and looking down on a city from so high up; it almost doesn’t look real! The views are spectacular!

You are totally right, it is like being in airplane except this is not moving.

Wow, those views are insane! I have such a terrible fear of heights, I wouldn’t be able to enjoy this, but I sure love looking at your photos!

Umeda sky building is not as high compared to the Taiwan 101 tower. That one is even scarier. I remembered the wind at the top observatory at Taiwan 101 can blow you away.

This looks amazing. I always love going to the highest building in any city, those views are stunning,

Wow! Some of those views are amazing. I love taking pictures of things like this too.

What a great building to visit in Osaka. It’s my dream to visit Japan, and I’m adding this to the list for when I do visit. Very interesting fact about the bridges there too.

We took an elevator from the basement car park the thirty-fifth floor before riding a spectacular 45-meter long escalator that seems to hang in mid-air. The escalator seems to be the best part of this trip. The view was stunning as you get the see the whole skyline of Osaka and yes the bridges, there are just too many of them and make one wonder why.

That is def. a beautiful skyline. I have never visited Osaka but Japan is def. on my bucket list to travel

Osaka is the second largest cities in Japan. The city has quite a lot to offer, including food and culture.

The architecture of Umeda Sky Building is stunning, especially at the top of Observatory garden. It was largely assembled at ground level before being hoisted to a height of 173 meters and fixed into place.

The glass elevator was so cool. Love all of your pictures. Id love to visit Osaka.

The glass elevator is one of the interesting features to go up the top. I love the ride, really cool.

What an incredible view of the city. I don’t know if I would have the courage to go all the way up there though!

The open-air garden would be scarier to look down from the top, the wind is super strong too.

I totally love the view from the top, what a beautiful view of the city. And the prices are so good, very affordable.

Some awesome photos and views! Will have to check this out next time I’m in Osaka.

Umeda Sky Building floating garden is also a great location for making a proposal for the couples.

this is a major bucket list item! Just being in Japan, thanks so much for a lovely must see tip!

Umeda Sky Building is a modern skyscraper in Osaka, I was a bit tired of visiting the castles and temples & shrines so make it a change to visit the modern part of Japan.