I have lived in Sydney for many years, I studied and worked here so this city is familiar to me. Visiting the CBD (Central Business District) area is kind of the must-do in Sydney. Sydney CBD is often referred to “the City” which include Haymarket, Chinatown, George Street, Darling Harbour and the Rocks.

There are a number of things to do when you are in this area. 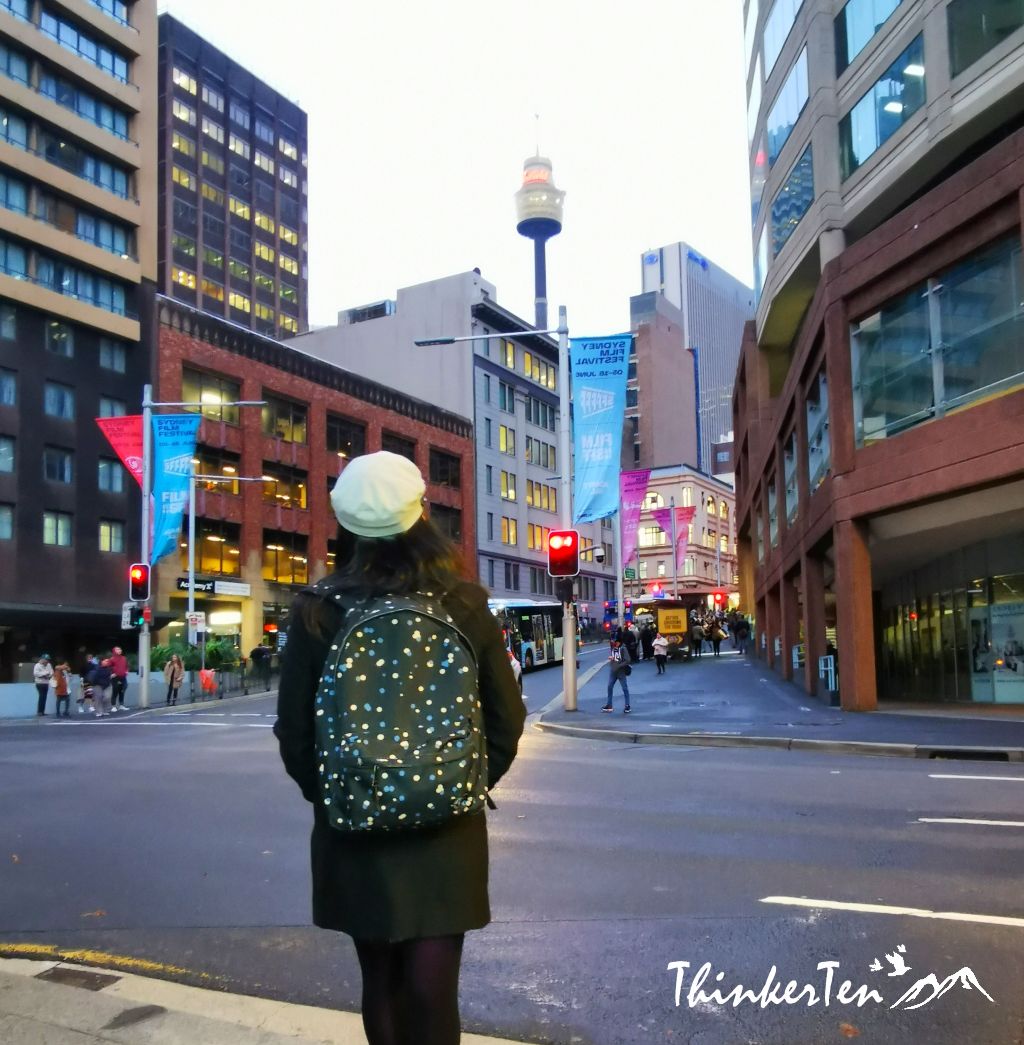 1. Have an International Buffet at Sydney Tower

Sydney Tower is the tallest structure in the CBD area, at the top you can see Sydney skyline with 360 degree unblocked view, including Harbour Bridge and Opera House. The 90 mins of all you can eat buffet include Australian fresh seafood (oyster and prawn), kangaroo meat, Japanese, Chinese & Thai cuisine. The best part is you are able to enjoy the revolving view of the city.

Darling Harbour is a harbour adjacent to the city centre, the Sydney Aquarium and Madame Tussauds Wax Museum are located here. The Chinese Garden and Big harbourside Shopping Center are also located here. Oh yes, if you love gambling, there is the Star Casino. Cockle Bay in Darling Harbour has lots of trendy pubs, cafe, and nice restaurants. It is really cool to have dinner, to see the night view of the harbour and looking at people walking up and down.  You can spend the whole day here with your family as there are so many activities to do for the adults and kids. 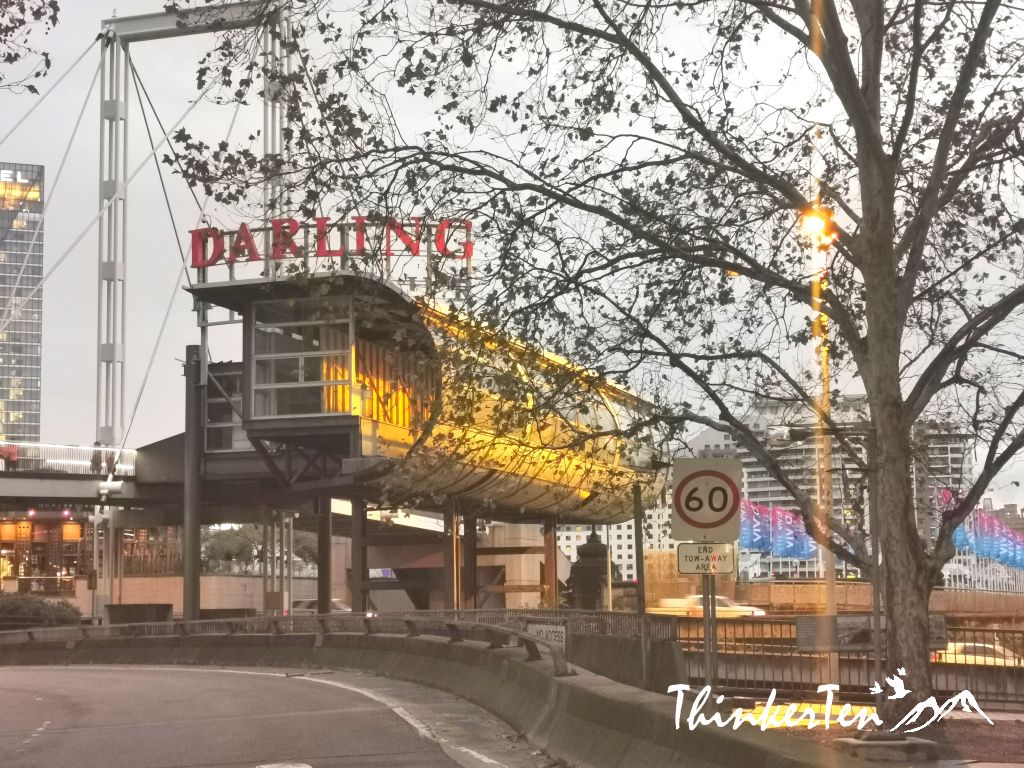 George Street is an important street in Sydney, also the oldest street in Australia. Some of the important architectures are located here, such as the Queen Victoria Building, The Strand Arcade, Sydney Town Hall and St Andrew’s Cathedral. 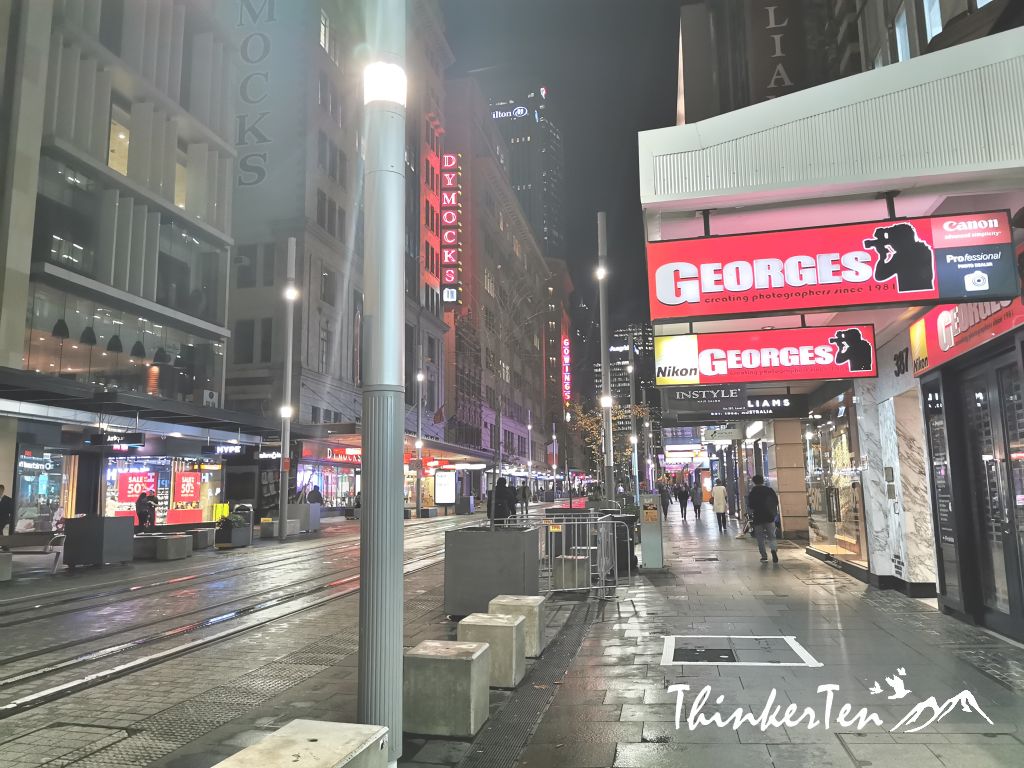 Don’t worry if you have not visited the mecca for anime Kingdom – Denden town in Osaka Japan.

Kings Comics George Street, has a huge range of cools stuff, from superhero from western and Japanese, all line up neatly at the window display.  You will also find manga, anime, comics, graphic novels, toys etc! 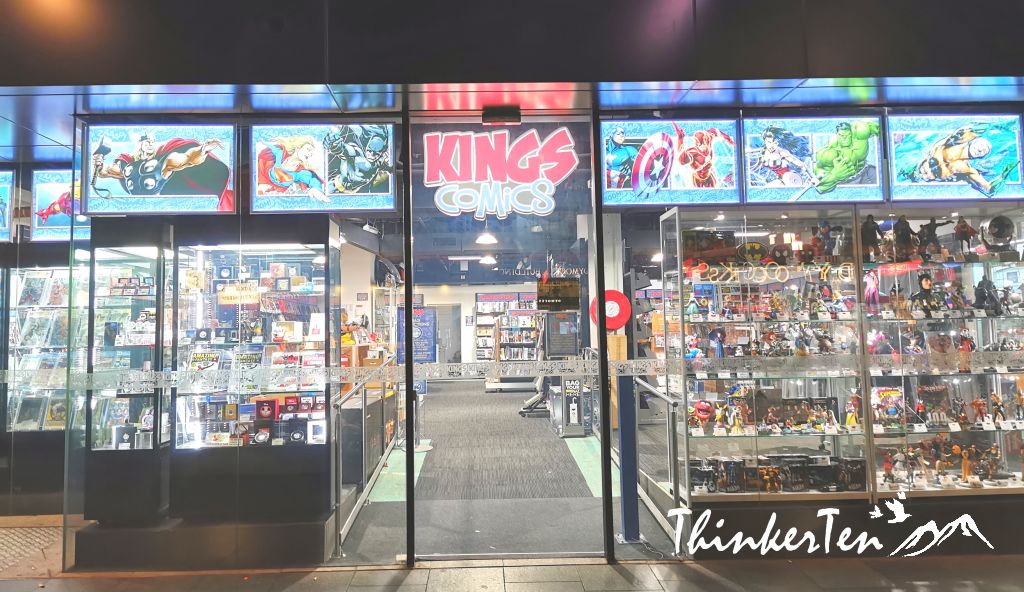 My favorite Totoro!  Totoro appeared in one of the most famous anime called “My Neighbor Totoro” by Hayao Miyazaki 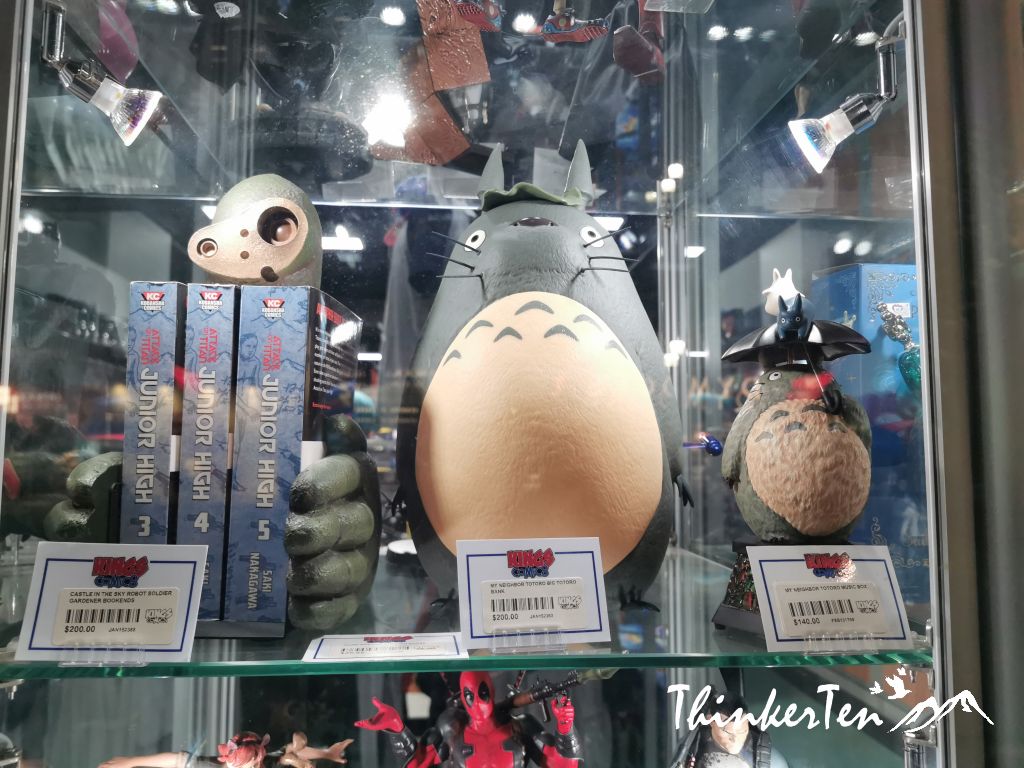 Super Mario – The Nintendo Game which is hits in the 80s 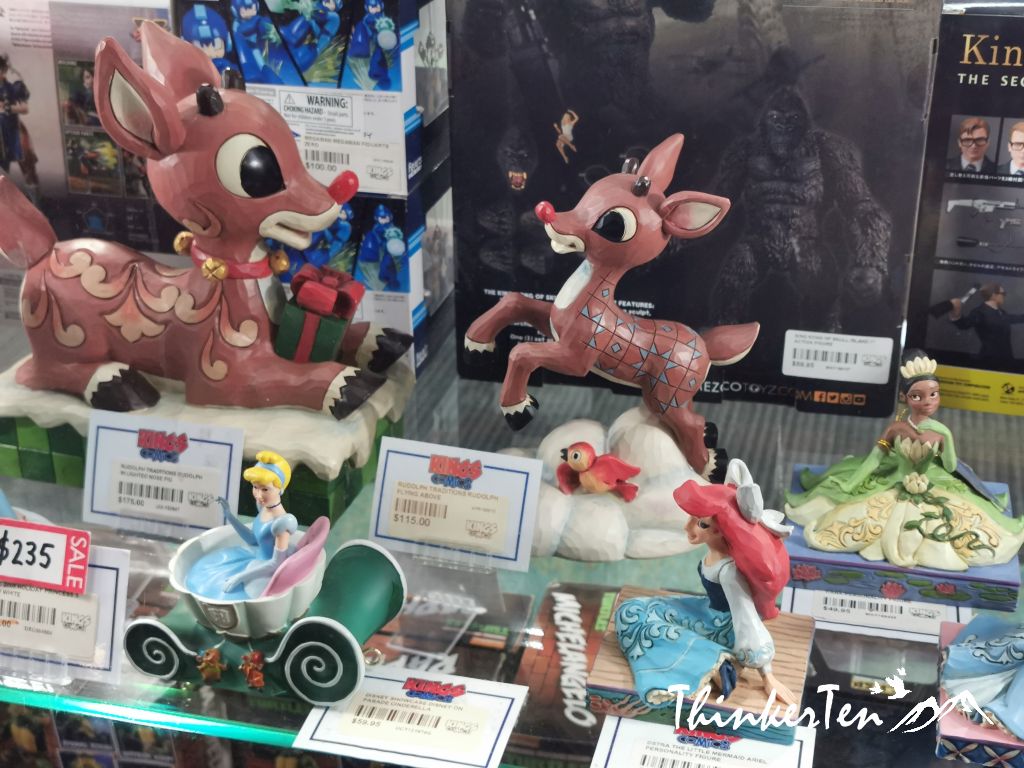 Mary Poppins – She loves the umbrella and always seen with a suitcase.

Strand Arcade is a heritage-listed Victorian-style retail arcade established in 1891. From the outside, you can’t see much difference but inside you will discover the grace and elegance of this building. The iron lace balconies, stained glass windows, and its cedar stairs are something you will encounter when you walk inside the shopping mall. Things here are posh and expensive, good for window shopping.

The Romanesque architecture of QVB is an iconic landmark in the CBD of Sydney. The dominant feature is the huge dome at the top and the stained glass window. The architect is George McRae. It is now a shopping center with restaurants. I used to work here during the school holiday as a part-time salesperson in one of the high-end Australia sweater shop called – Coogi Australia, an Australian label. Bill Cosby, the American comedian once wore the colorful sweater in his show! Every sweater from Coogi is individual and you can’t spot two identical sweaters. 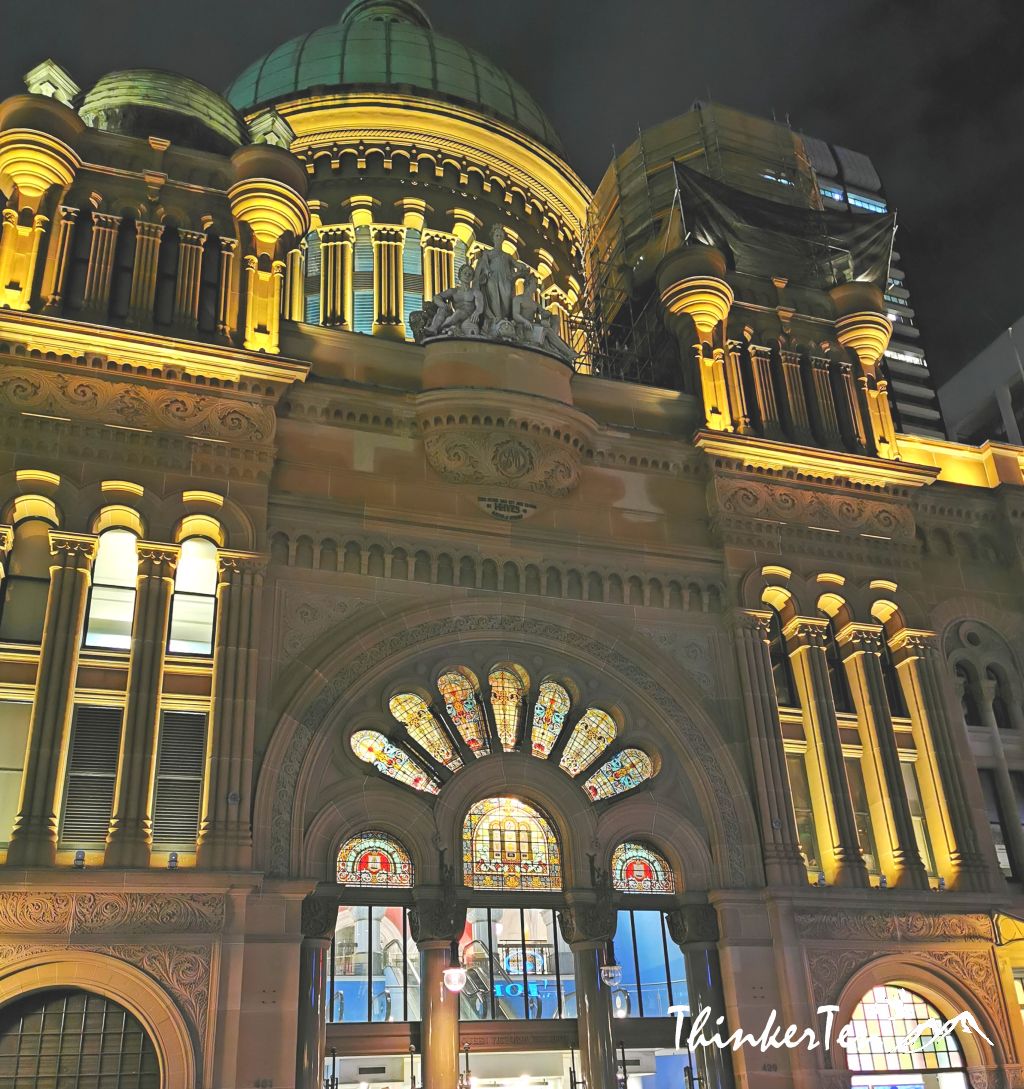 When I worked in Sydney Martin Place or CBD, Sydney Town Hall is a great meeting point for me whenever I wanted to meet up with friends after work for dinner or a drink. The steps at the front hall has a huge space for people to wait and sit. This is a major landmark in the heart of the city built more than 130 years ago. 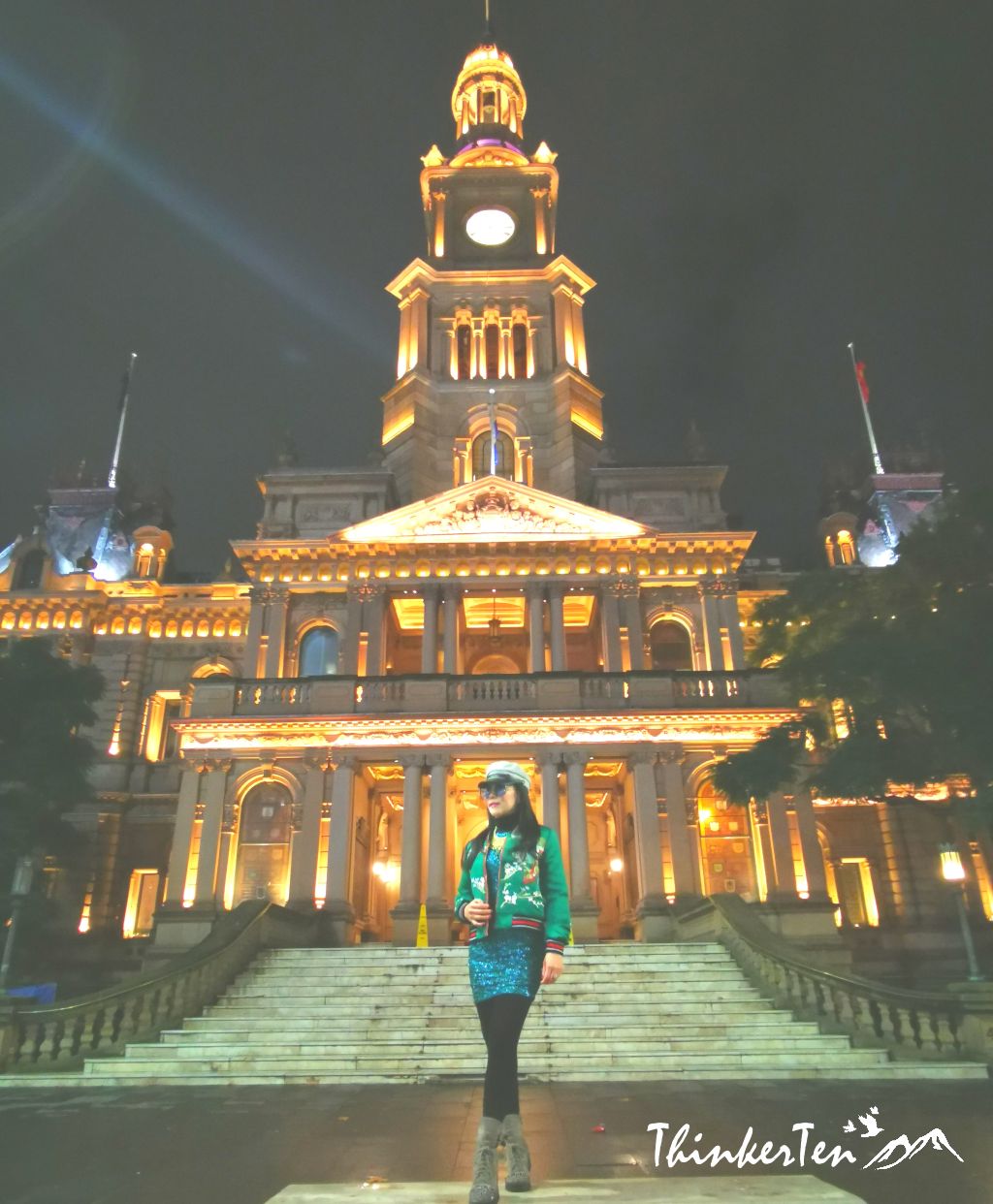 A large bronze anchor designed to represent a sailing ship can be seen not far from the Town Hall. This statue has been made with the support of the Chinese Community to mark their contribution since the early days of the City. In a wider sense, “To Sail, To Stop”, symbolises all those who have traveled and who have chosen to stay. 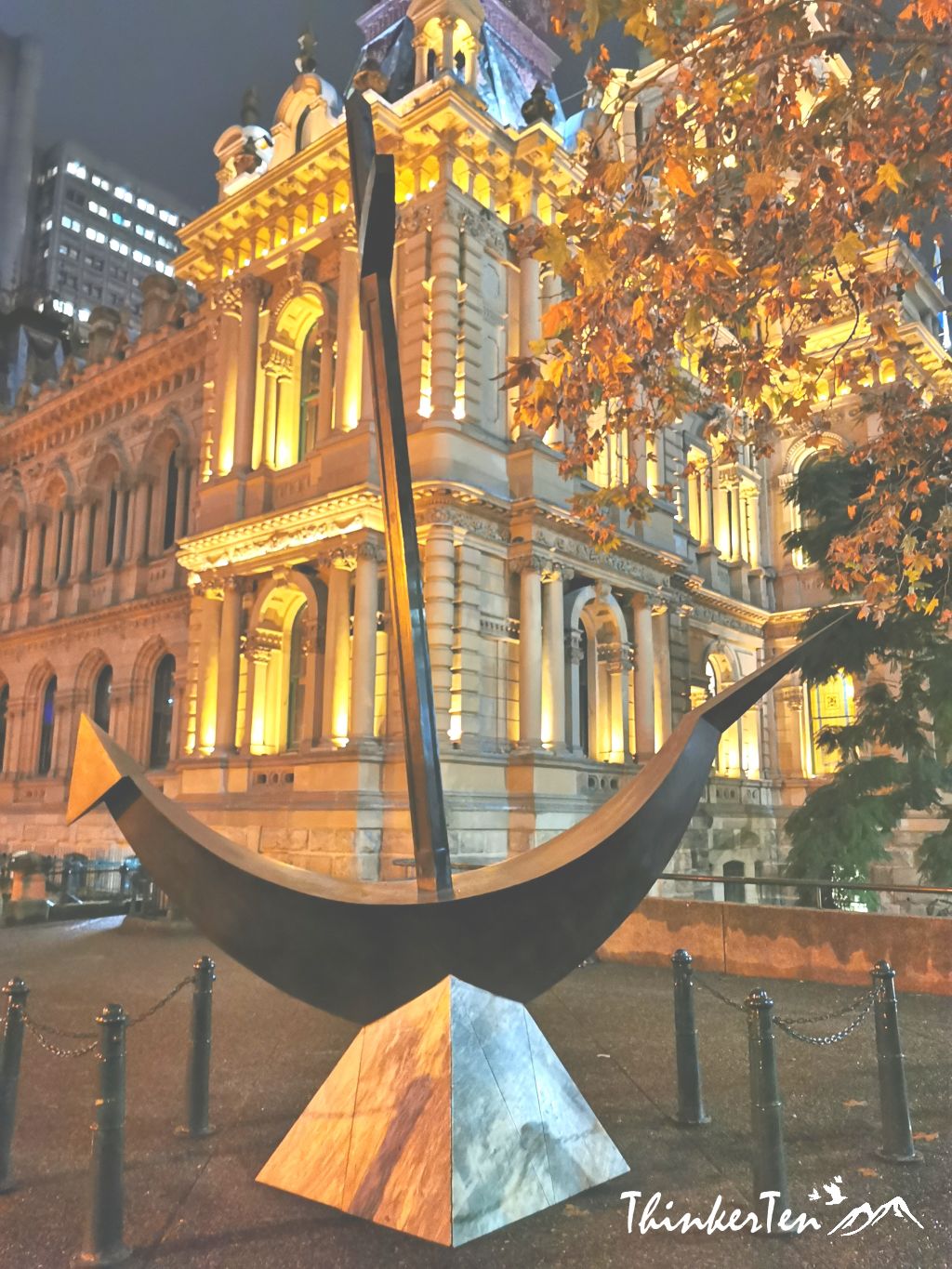 Sit next to the Town Hall, St Andrew’s Cathedral built-in 1819, the oldest cathedral in Australia. If you see the cathedrals in Europe, then this one here has nothing special and small. If you have not seen any grand cathedral, you still find St Andrew’s Cathedral very pretty, pay attention to the beautiful stained glass window and the sandstone wall, a lovely neo-gothic architecture. 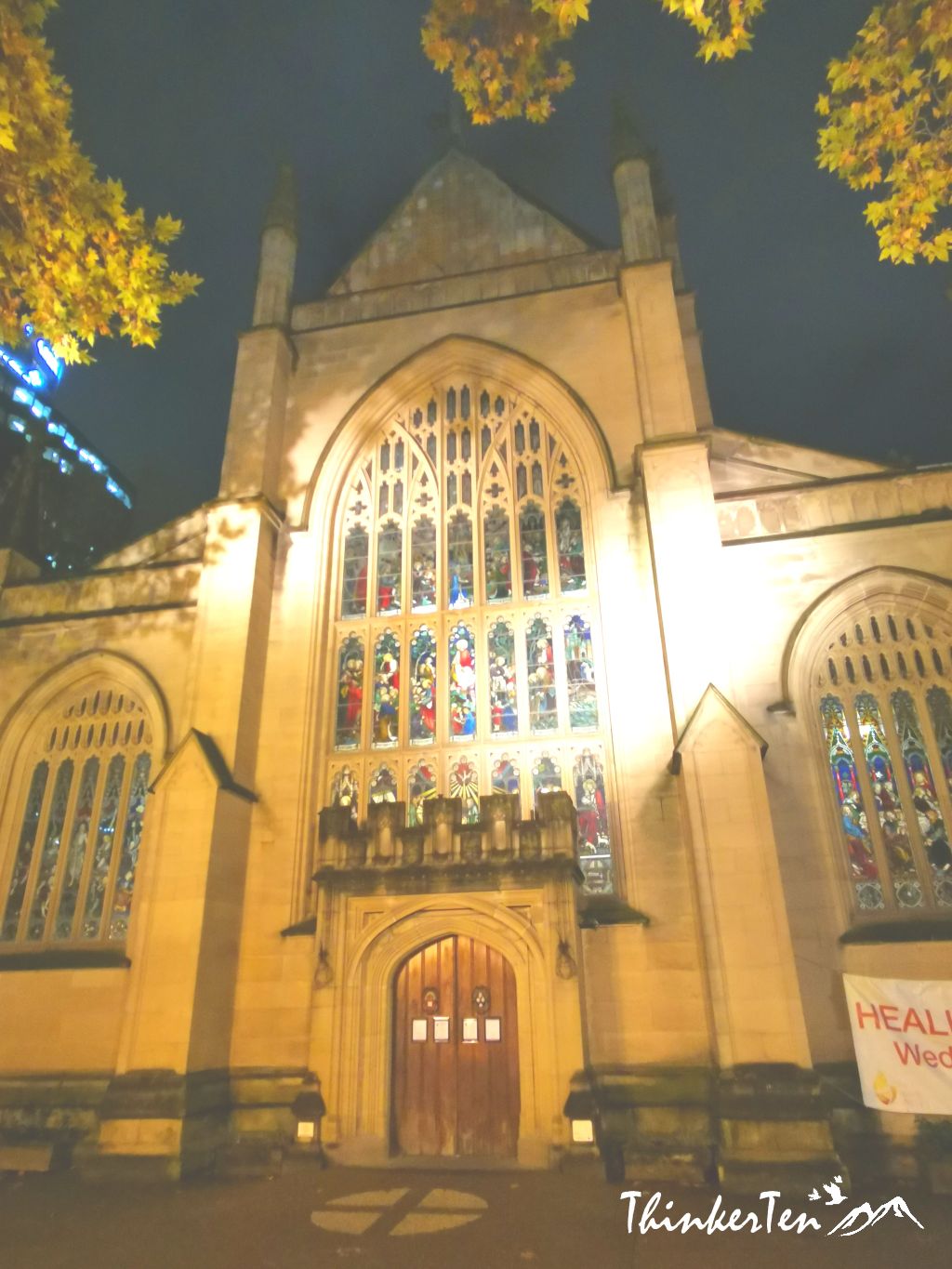 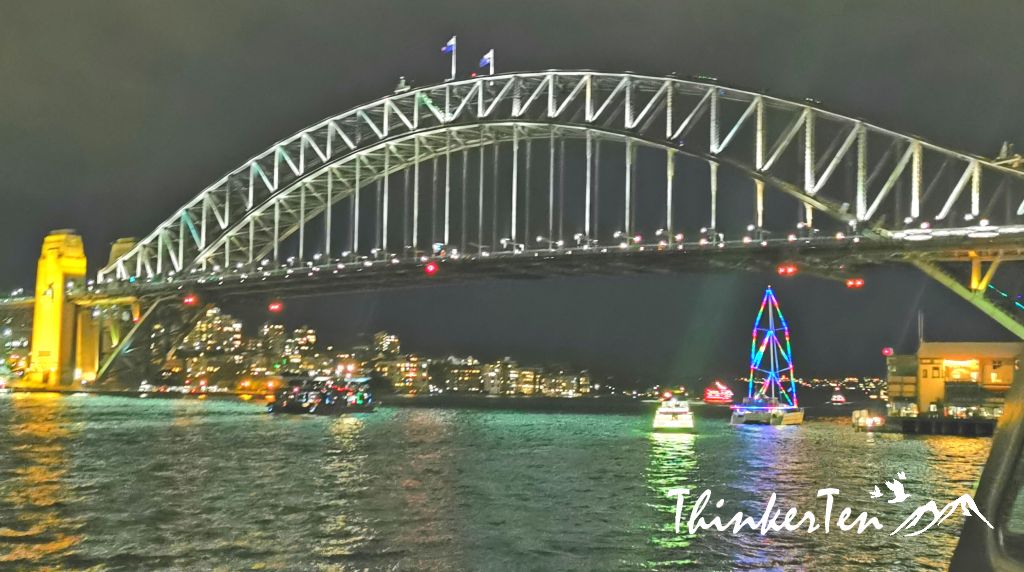 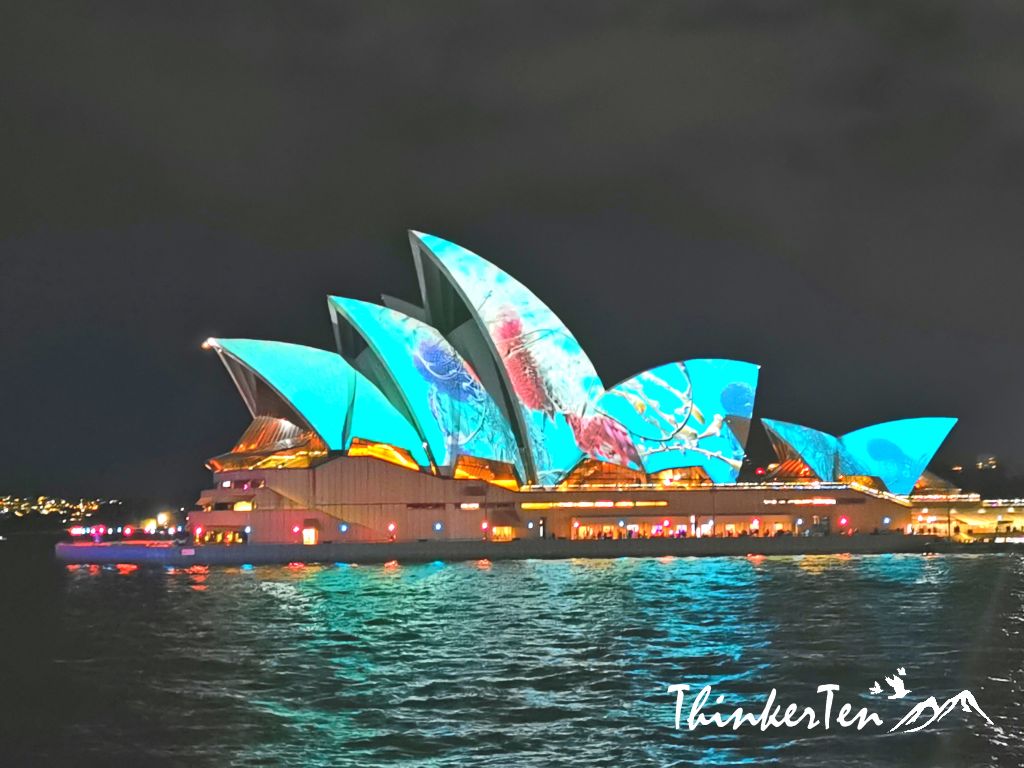 Sydney looks like such an amazing city. I’ve always wanted to see it. These shots make me want to go even more.

I would love to visit Sydney one day. I don’t know much about the town, except for the Harbour Bridge and the Opera House. SO thank you for showing some less touristy things that you can do in the city. I would probably spend hours inside King’s Comics looking at all the toys in there.

The King’s Comics shop is kind of huge and you can spend some hours inside, looks similar to the shops in Osaka Denden Town, the anime town kingdom.

What a amazing and wonderfully written blog post these photos of Sydney are awesome as well it’s such a beautiful place and I would love to visit there someday !

Thanks for your kind comment. This is about Sydney CBD and Sydney is the biggest city in Australia. However, Australia is actually well-known for its natural wonders and wide-open spaces, its beaches, deserts, “the bush”, and “the Outback”

Sydney, Australia is such a wonderful place to visit! I would love to go here very soon and enjoy the beautiful scenery!

Australia has so much to offer, especially for travelers who love nature and beach. The wild animals are abundant too. You never know when you will bump into a kangaroo on the road when you are driving away from the city.

I can’t believe i’ve never been to Sydney yet, it is such a gorgeous city! Soon i Hope.

Well, you will love the Aussie accent too.

This is a great review! I would love to visit Sidney one day.

Besides the Sydney CBD area, there are also other suburbs where you can reach by public transport like trains or buses, such as Bondi Beach and Coogee Beach.

I want to go to Austrailia so bad!

I would love to visit Australia someday! My first introduction to Australia was with Crocodile Dundee!! LOL

Looks like a really cool city! I can’t wait to finally go to Sydney and Australia one day! Would love to travel there.

I hope this work as a guide for you when you do Sydney.

This is where my daughter wants to go. She says it’s the ONLY place she wants to go outside of our country, but I imagine if she goes, she’ll change her mind. Travel bugs bite you that way. 🙂

LOL, I guess so. Travel bugs do exist and I caught that since many years ago.

I love that in little time you can go from city to somewhere that you can get in touch with nature, culture and a less advanced way of life.

You are right, Sydney has lot of nature nearby which can be reached in very little time. If you want something that is total nature, then visit Blue Mountain, the Three Sisters, which is only an hour drive from Sydney CBD.

Wow, these are definitely a great places to see when visiting Sydney, Australia. Wishing to visit that place and enjoy everything that it has.

There are a number of things to do in the CBD area of Sydney, the Darling Harbour, Circular Quay, the Rocks, Botanical Gardens, Queen Victoria Buildings, Town Hall are all located in the city.