I have been to Beijing twice and the recent one was because of my trip to Gansu (Lanzhou) Silk Road Trip. We needed to transit at Beijing Capital Airport then catch a connecting flight to Lanzhou Gansu to start our Silk Road adventure. Unfortunately, we missed our connecting flight to Lanzhou and had to stay over one night in Beijing. So I got to talk a little bit of my missing flight experience and the Beijing Capital Airport review here.

The reason that we missed our Lanzhou flight at Beijing Capital Airport is due to the short transit time.  We only have 2 hours to rush for our next connecting flight (domestic hall). I think 3-4 hours is more of a safe side if you are getting a connecting flight to other parts of China.

Beijing Capital Airport is huge and there are a number of obstacles that we need to clear. 2 hours is certainly not enough to clear and get to the domestic hall. T1 caters to domestic flights. T2 caters to a mix of domestic and international flights.  We arrived in T3.

Below are the obstacles that you have to clear when you arrive at Beijing Capital Airport.

If the airport is full, you have to wait for the next one.  So if you are rushing for connecting flight, please hop in for the first bus.

The lines for both Chinese nationals and foreigners are very long for custom clearance. China immigration has new rules to store all foreigners’ 10 fingerprints and a face photographing upon entry. There are few steps to store our fingerprints, first put your both thumbs to scan, then the rest of 8 fingers. The scan can take up a lot of time as sometimes it is not sensitive enough to capture.  Very tedious. After the fingerprint scan, the officer will ask you to aim your eyes at the camera and take photos of you. Both steps (fingerprint scan and eye photos) take roughly 5-10 mins to clear for each person. Imagine the line is already very long and each person takes more than 5 mins! Hence it took more than an hour for us to clear the custom hall. 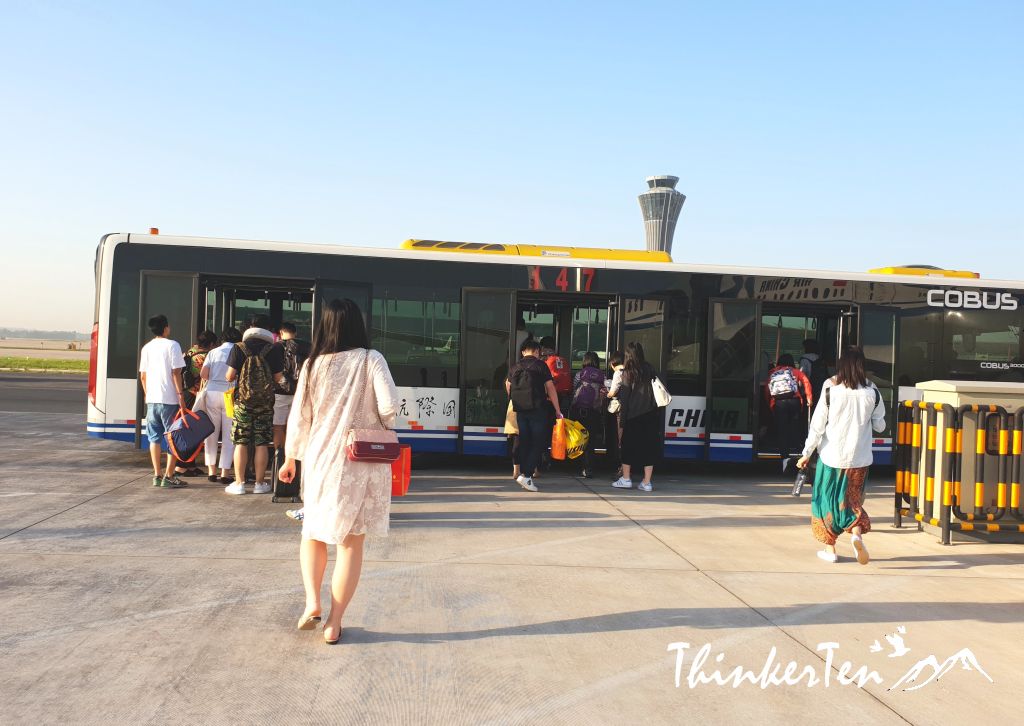 Most Air China airplanes will land at Terminal 3, and there is an APM train to take you from Zone E to Zone C to the baggage claim area. 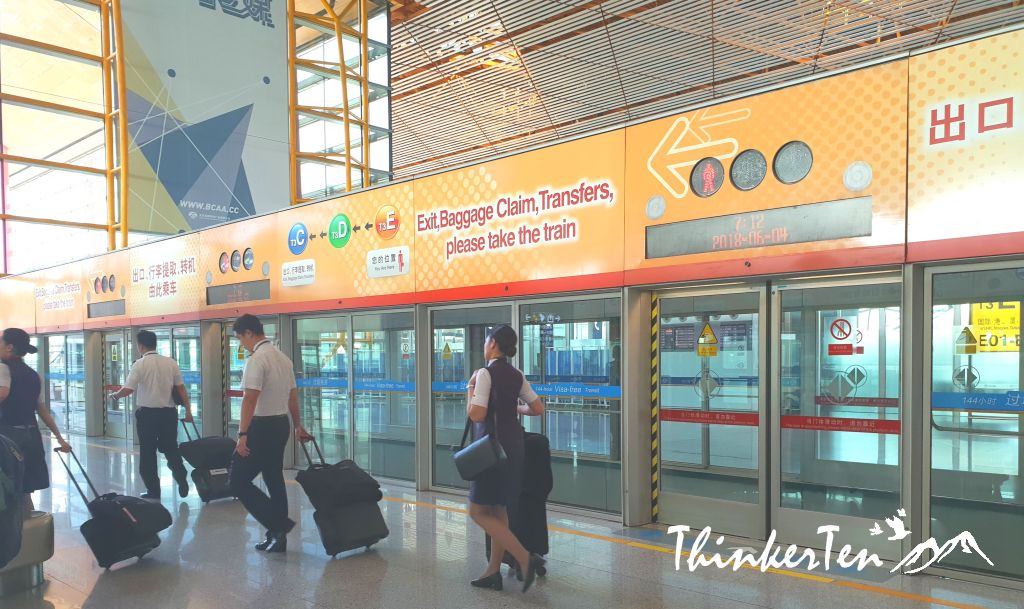 Too bad the boarding gate to Lanzhou was closed. We had officially missed our flight.  The gate closed about 10 mins earlier than the departure time. It happens.  Once the airplane door is locked, it usually will not re-open unless emergency or for VIP. So always need to reach the airport gate at least half an hour earlier.

Nevermind, let’s explore the PEK- Beijing Capital International Airport. The airport is located 32 km northeast of the city center (Tiananmen Square), at Chaoyang District. Beijing Capital Airport serves as the main hub for Air China, China Sothern Airlines, Hainan Airlines, and China Eastern Airlines. We were on Air China earlier. There is another airport in Beijing called Nanyuan Airport that serves as the secondary airport of Beijing. 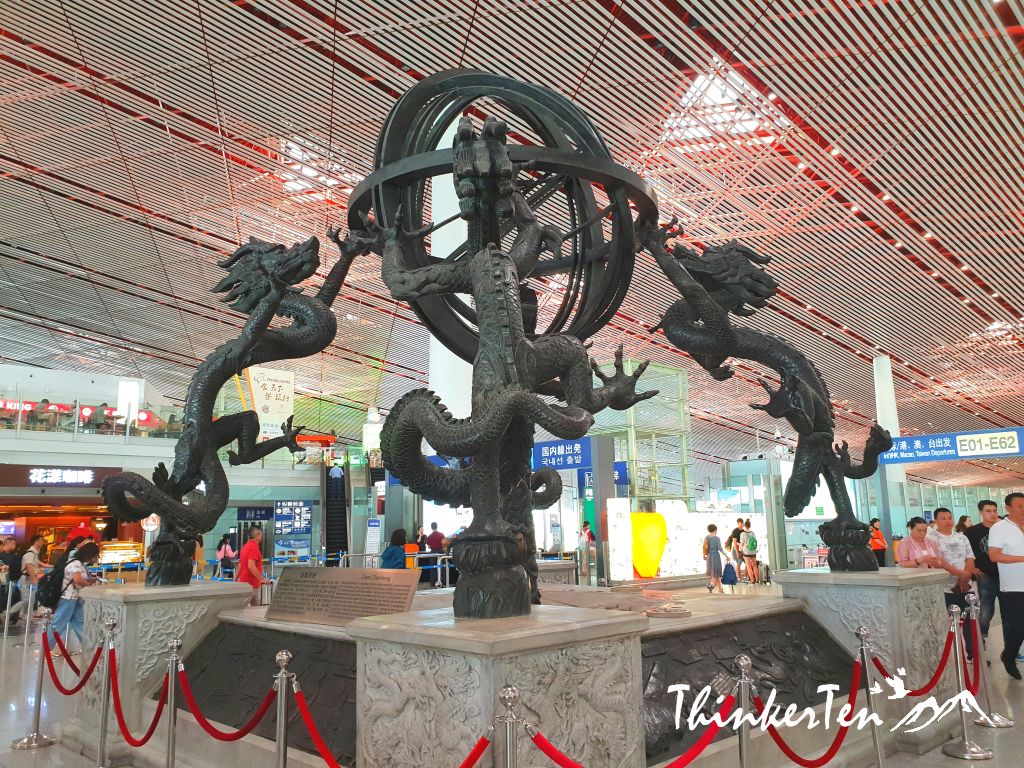 First, we tried to get the next available ticket to Lanzhou at the Domestic Ticket Counter, we managed to get the next morning flight at around 6 am plus to Lanzhou.  We just took it, even we knew that we have to wake up super early to check-in at 4 am. 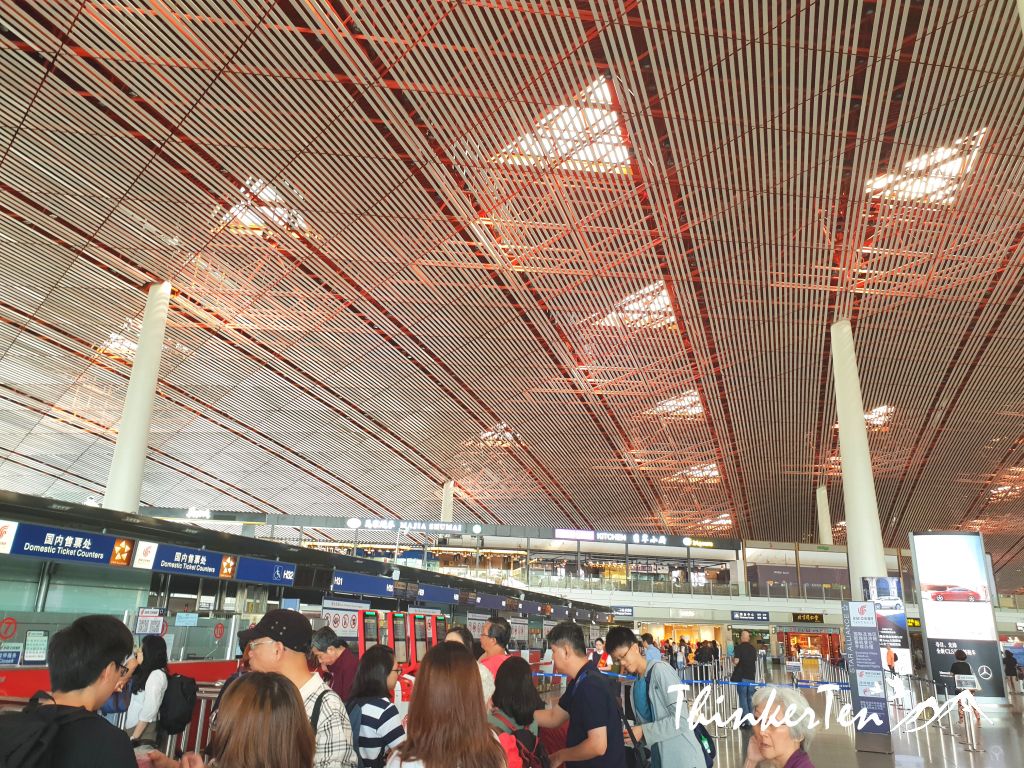 The airport has a lot of good options from local to international including Thai and Japanese. Other Western such as Starbucks, McDonald’s, KFC and Costa Coffee are also available. 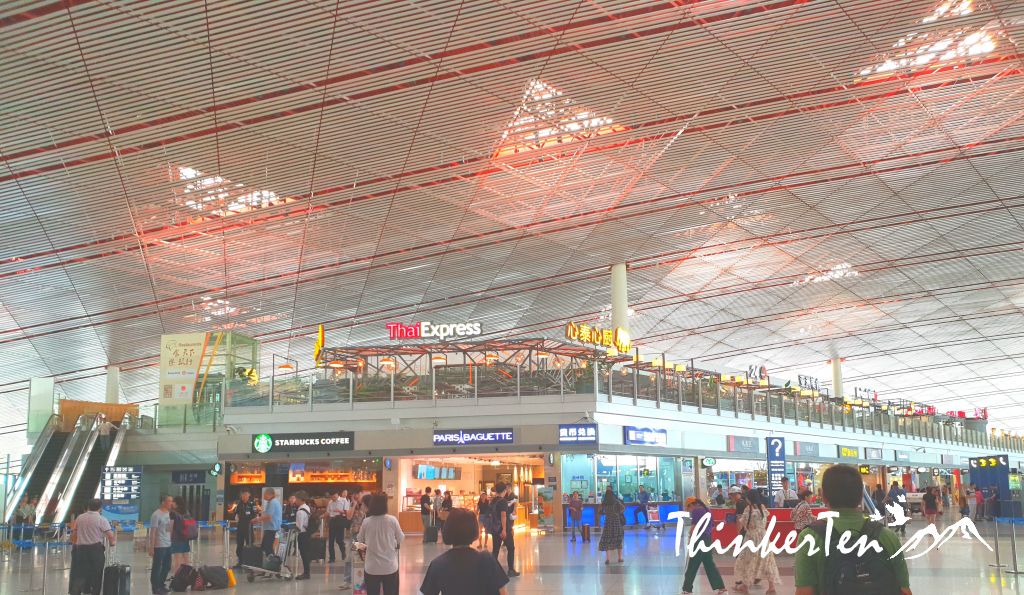 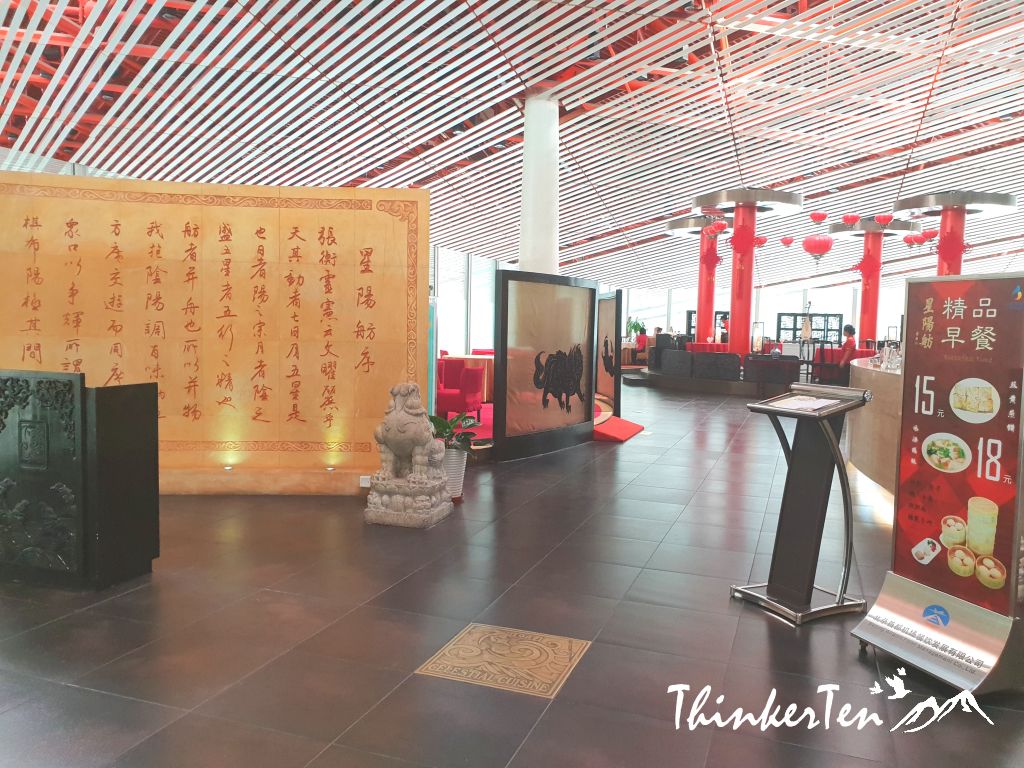 We choose to have the local Chinese cuisines in Xing Yang Fang. The decoration looks very elegant, large spaces but the restaurant is still vacant as it is still very early in the morning. Their dishes including roast duck and other Chinese cuisines. We ordered some breakfast set for a quick breakfast. Total cost at RMB 75 (USD 10.70) 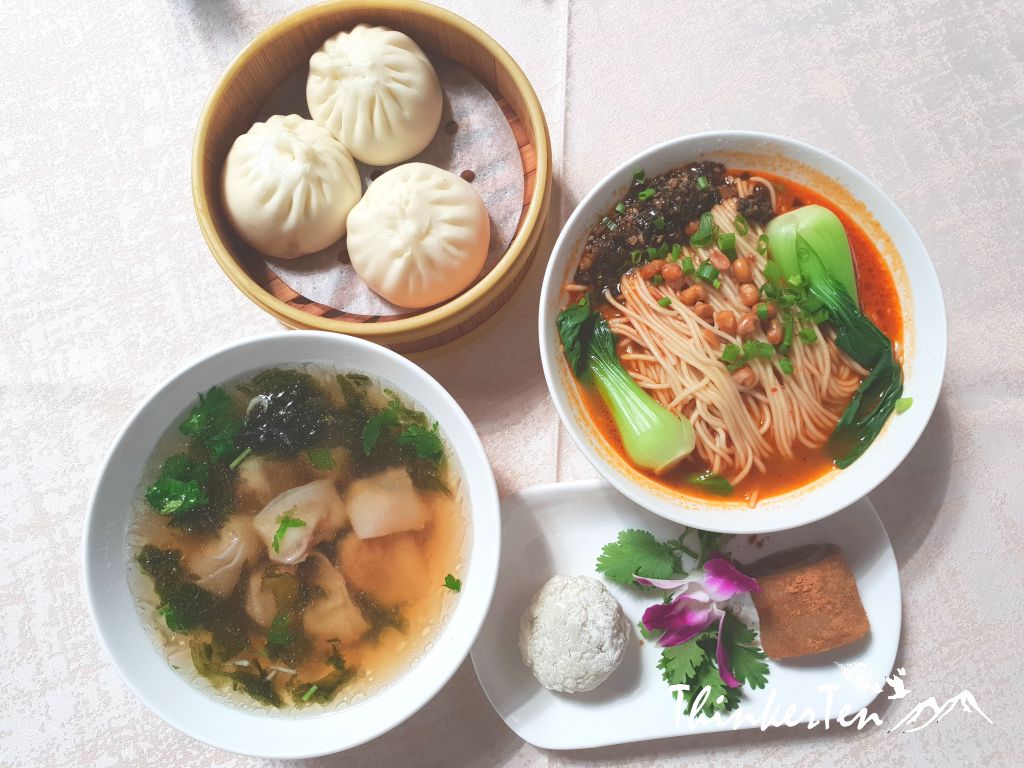 T3 is designed by Sir Norman Foster, as an interpretation of traditional Chinese culture, the roof of the airport has a dragon-like form.  This is expressed in its dragon-like form and the drama of the soaring roof that is a blaze of ‘traditional’ Chinese colours – imperial reds merge into golden yellows.

Some of the famous work done by Sir Norman Foster is Reichstag in Berlin, the German Parliament House with the glass dome which is part of Forster’s redesign. The Expo MRT Station in Singapore and Apple Park in California, USA.  The obvious similarity of these designs is the aerodynamic shape!

Beijing Capital International Airport is huge and the custom is tight. Such items as lithium battery,(the extra batteries), mobile charger are forbidden in checked baggage, they can only be carried as hand luggage. The rated energy of each battery should not exceed 100wh. The batteries between 100wh and 160wh must get the permission of the air company; each passenger is allowed to take at most two spare batteries. 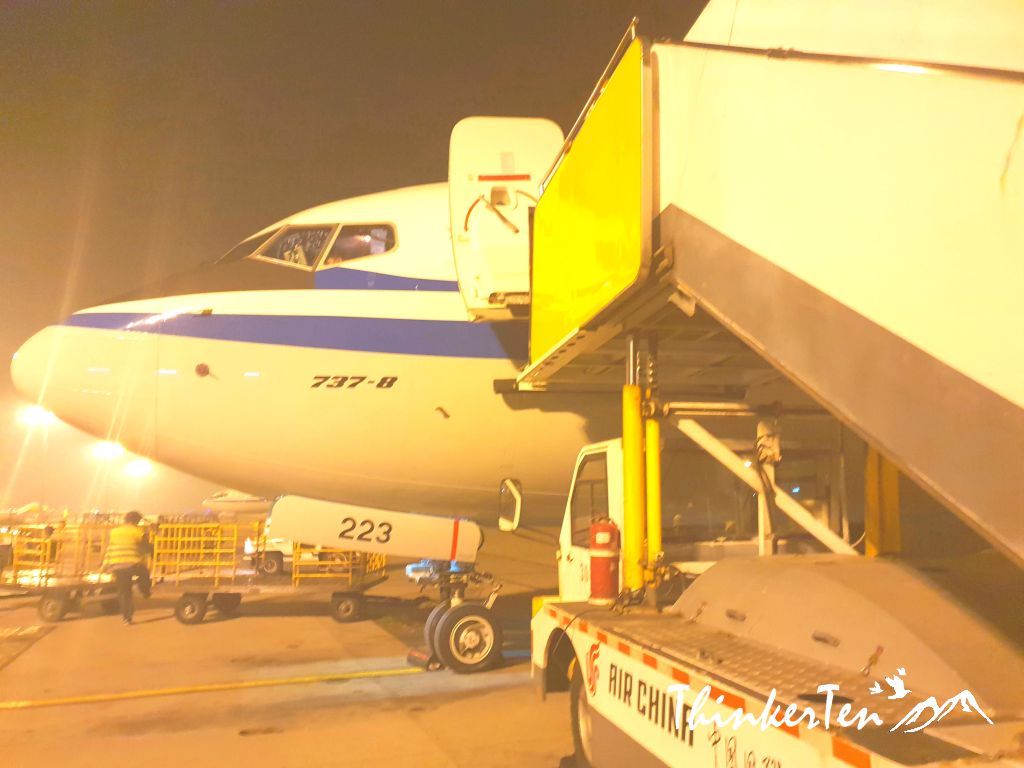 Learn about Bullfights in Ronda Bullring in Spain

I’ve missed a flight before! So stressful!!

Missing a flight is so stressful and it ruins your whole itinerary plan too.

There is nothing worse than missing a flight. I’ve done it only a couple of times, but now find that I have to get there hours earlier.

I guess you totally know how it feels.

Oh, my goodness. That sounds stressful. I can’t believe how tight their custom. Good to know. Thanks for sharing!

Beijing Airport Custom is strict and it takes longer to check for each visitors into the country.

That was a really horrible experience. Never experience that before. But glad to hear that you have found ways to at least relieve the stress.

I guess it is part of the package in the travel experience. The anxiety and stress is no joke.

Good things to think about when you are dealing with commuting via airplane. You really need to make sure you do the prep work and be ready for things.

You are right, prep work and research are important. I would rather have a longer time for layover.

I am always terrified of missing a flight as even a delay can be so time consuming.

It is a nightmare because your whole plan is affected.

I bet you weren’t expecting that! We’d be so worried – but you handled it very well, at least you saw a bit of Beijing!

You are right, I get to see some part of Beijing especially the Bird’s Nest stadium of Beijing.

That is one of my fears! Traveling can be so stressful, and layovers are a challenge with all the rushing around.

You are right, traveling can be stressful especially you rushed like hell and miss the flight. Hence, the layover should be longer.

You are right, traveling can be stressful especially you rushed like hell and miss the flight. Hence, layover should be longer.

I’ve never missed a flight thank goodness but what a hassle if you do! At least you were able to make the most of the situation!

It was my first time to miss a flight and I hope it is the last.

Abhhhh missing flights can definitely be frustrating!! Thankfully I have never had that happen before

Yes, you are right but it is part of the travel experience.