If you are in Barcelona, you may want to include Montserrat mountain which has a stunning landscape in Catalonia. It is also an important religious site in Spain.  Even if you are a non-catholic or Christain, you will still find this place awesome and many to offer.  One of the highlights here is searching for the “little Black Madonna statue”. 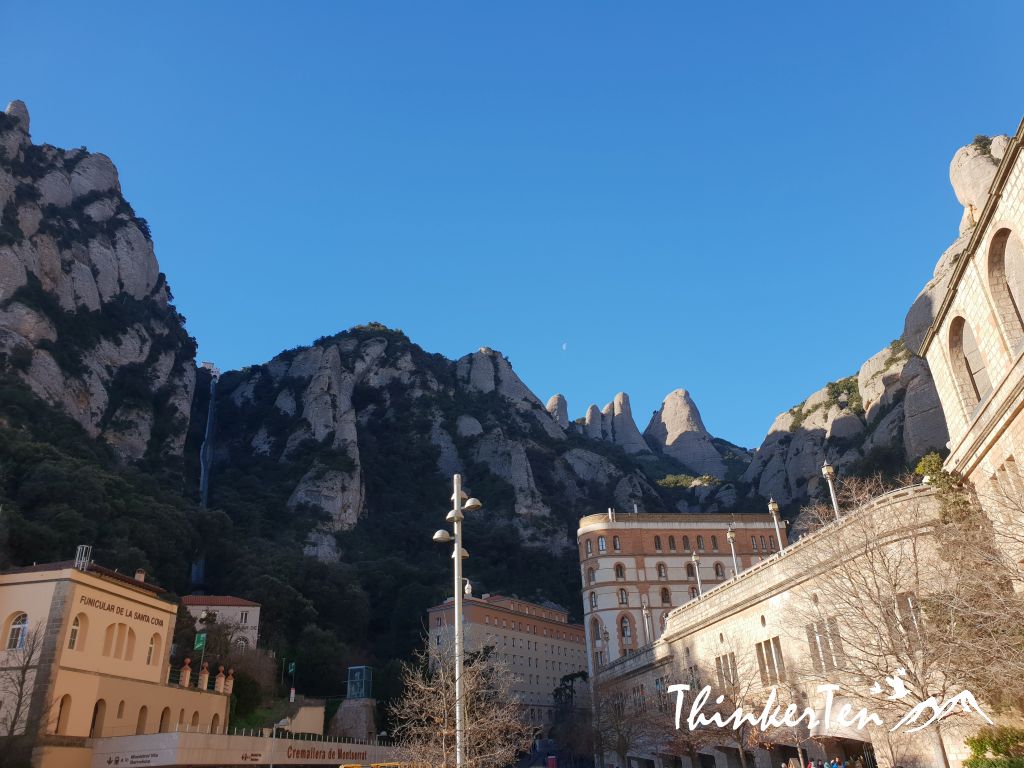 How far is Montserrat from Barcelona?

It is about an hour’s drive for a bus or car. There are trains and buses to bring you up. People usually doing a day tour to Montserrat.  We were up early in the morning and you can see the early fog was quite serious.

One of the most popular ways of getting to Montserrat is by train from Plaza Espanya rail station. Trains leave the station every hour. 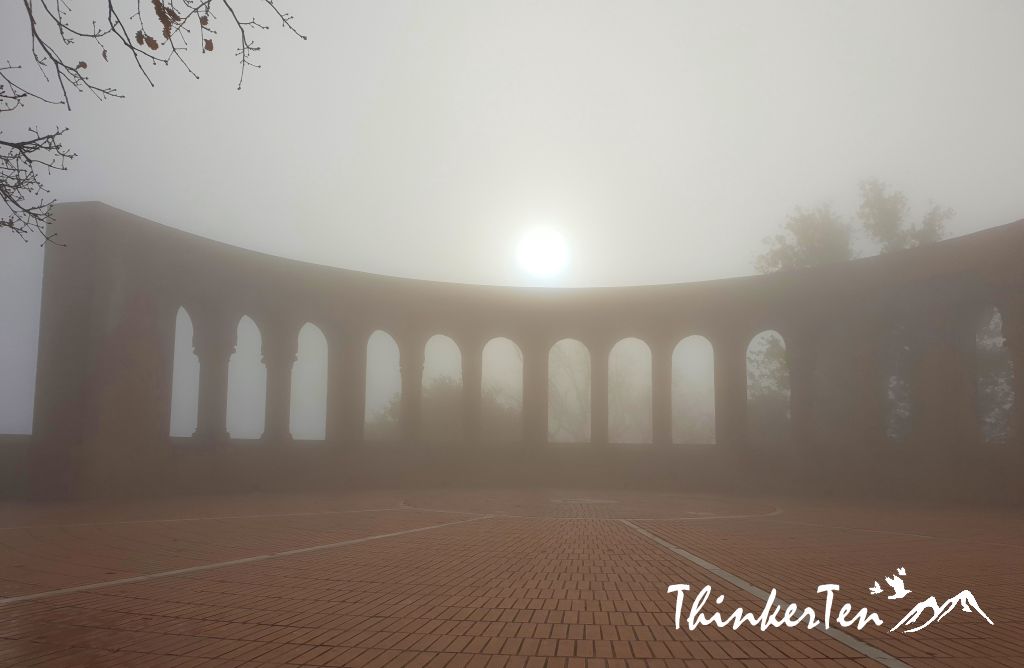 How tall is Montserrat?

It is about 1,236 m above the valley floor also the highest point of the Catalan lowlands.

There are two funiculars and one rack railway in Montserrat, a total of three mountain trains.

The Cremallera is the rack railway service that will take you from the bottom of Montserrat Mountain to arrive at the Montserrat Monastery.

Going further up with the funicular will enable you to experience the steep journey. You can get the tickets from the funicular station.

Since there are churches in Montserrat, a proper dress code is necessary for entrance to Montserrat Basilica. Stay away from tank tops and shorts or sandals. I was there in the winter so I was covering myself all over and the weather was cold since it is a mountain. 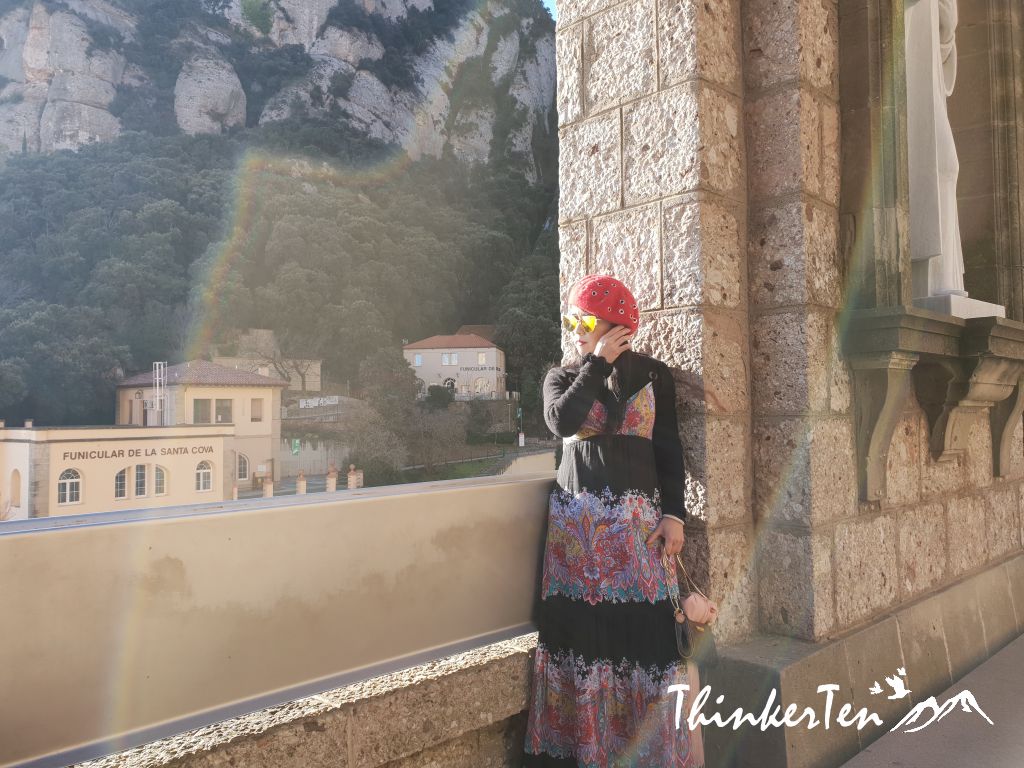 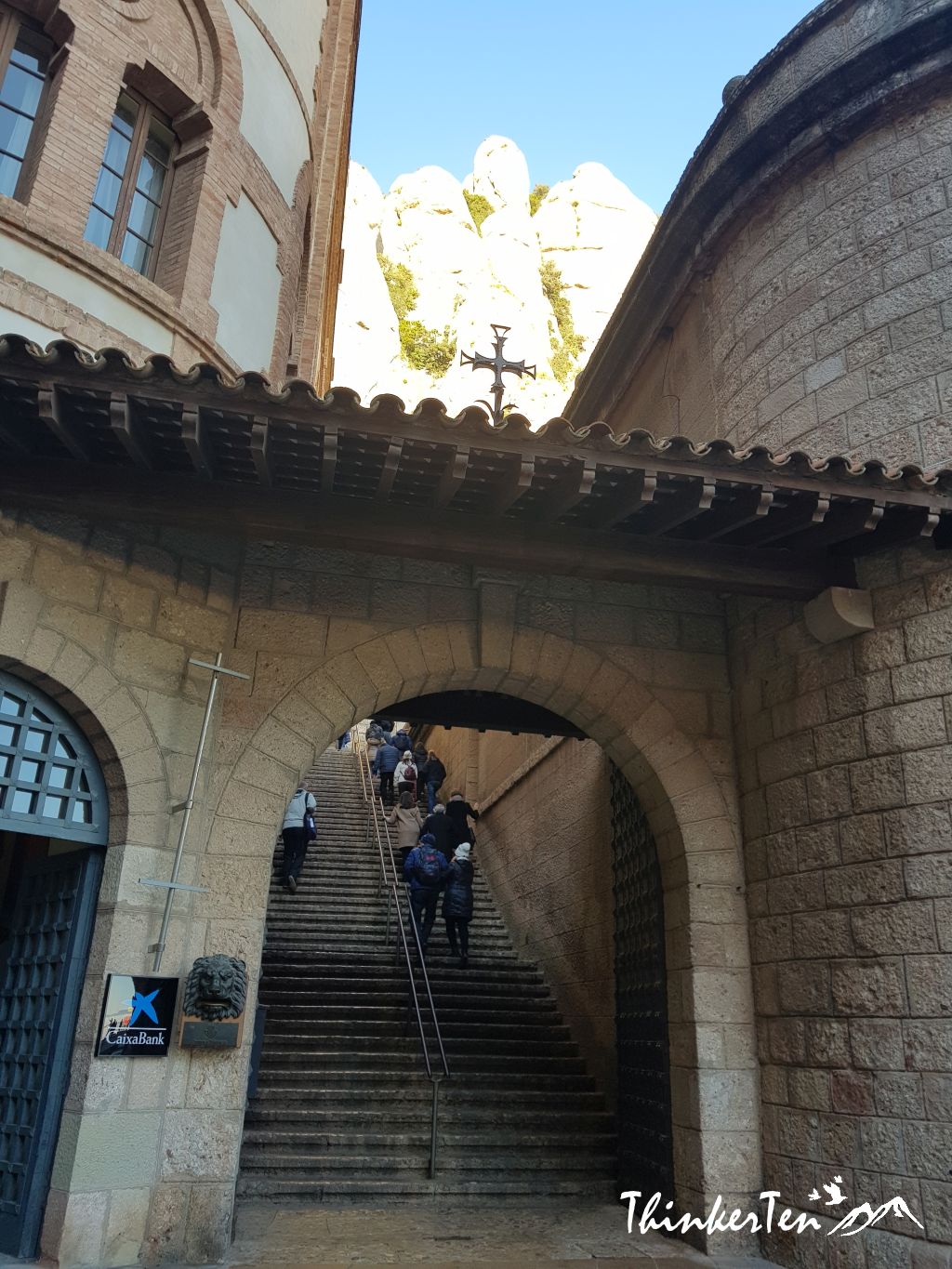 The name Montserrat means “Jagged mountain” because of the sharp-looking peaks of the mountain. According to the legend, angels came down from the sky and serrated the mountain with the golden saw to create a throne for the Virgin Marry. There is a monastery in Montserrat so you hear legend like so. 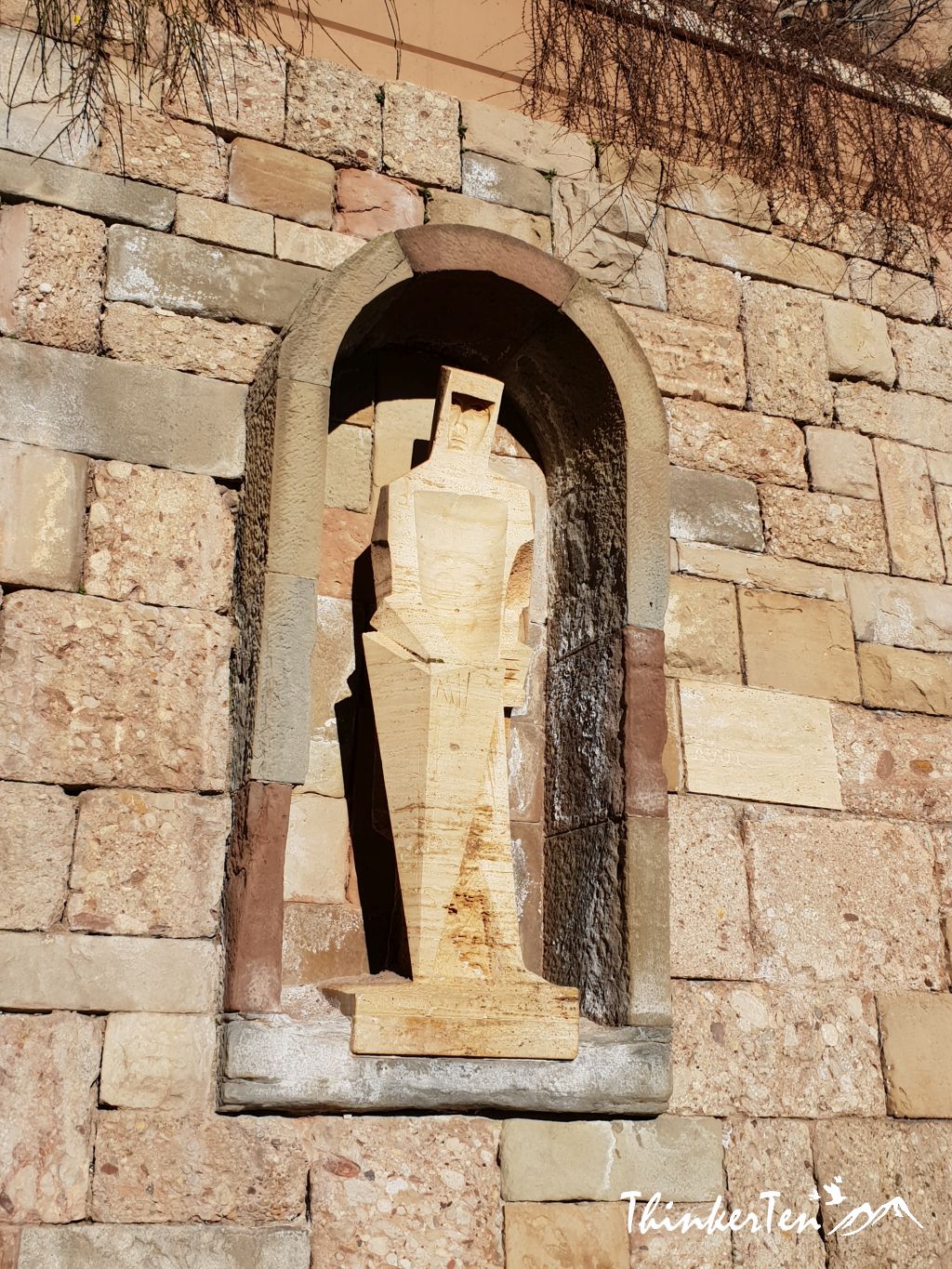 Why you see Strange Rock Formation in Montserrat?

When you are up in Montserrat, you will notice the unique rock formation which is famous for its jagged peaks. It was formed over 45 million years ago, back when most of the area is still underwater. 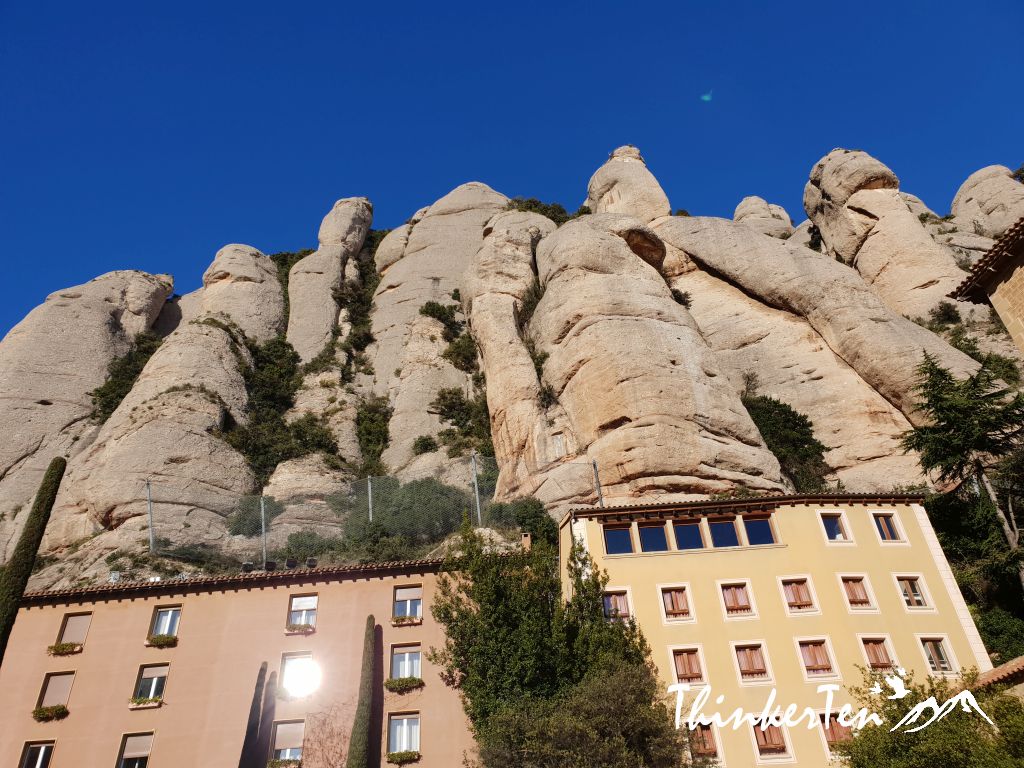 There is a Basilica at Montserrat Monastery.  The Gothic building looks super grand, with the atrium – an open rooftop courtyard area that sits directly in front of the Basilica.  There are no fees for the Basilica but donations are welcome if you need to offer candles. 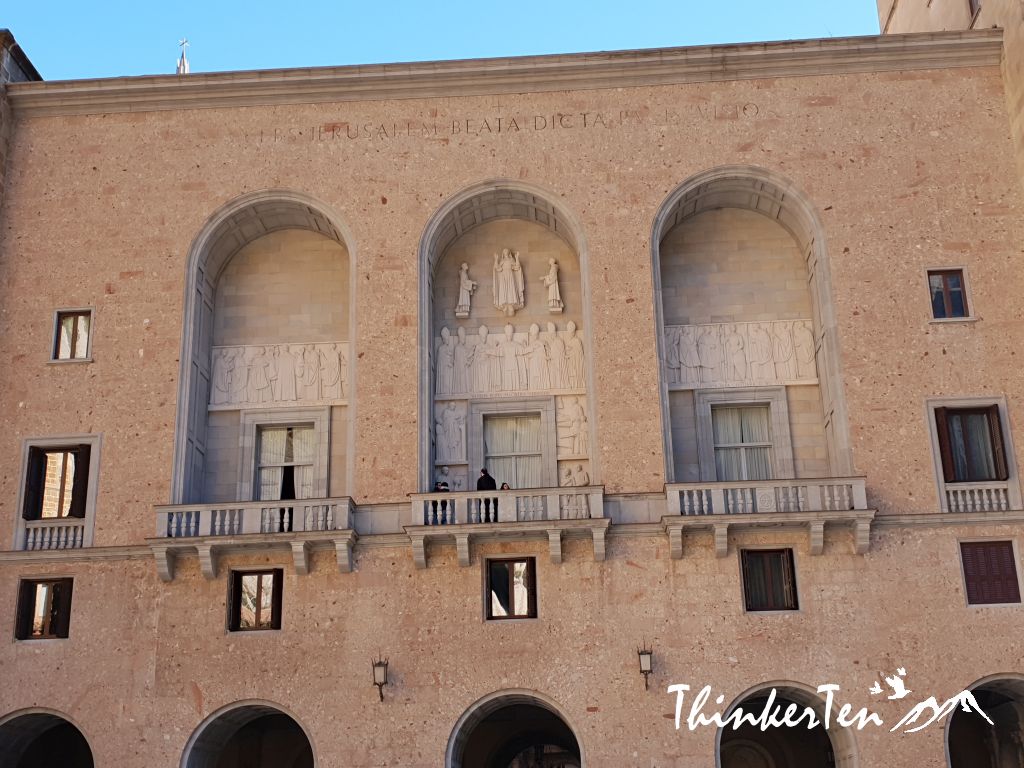 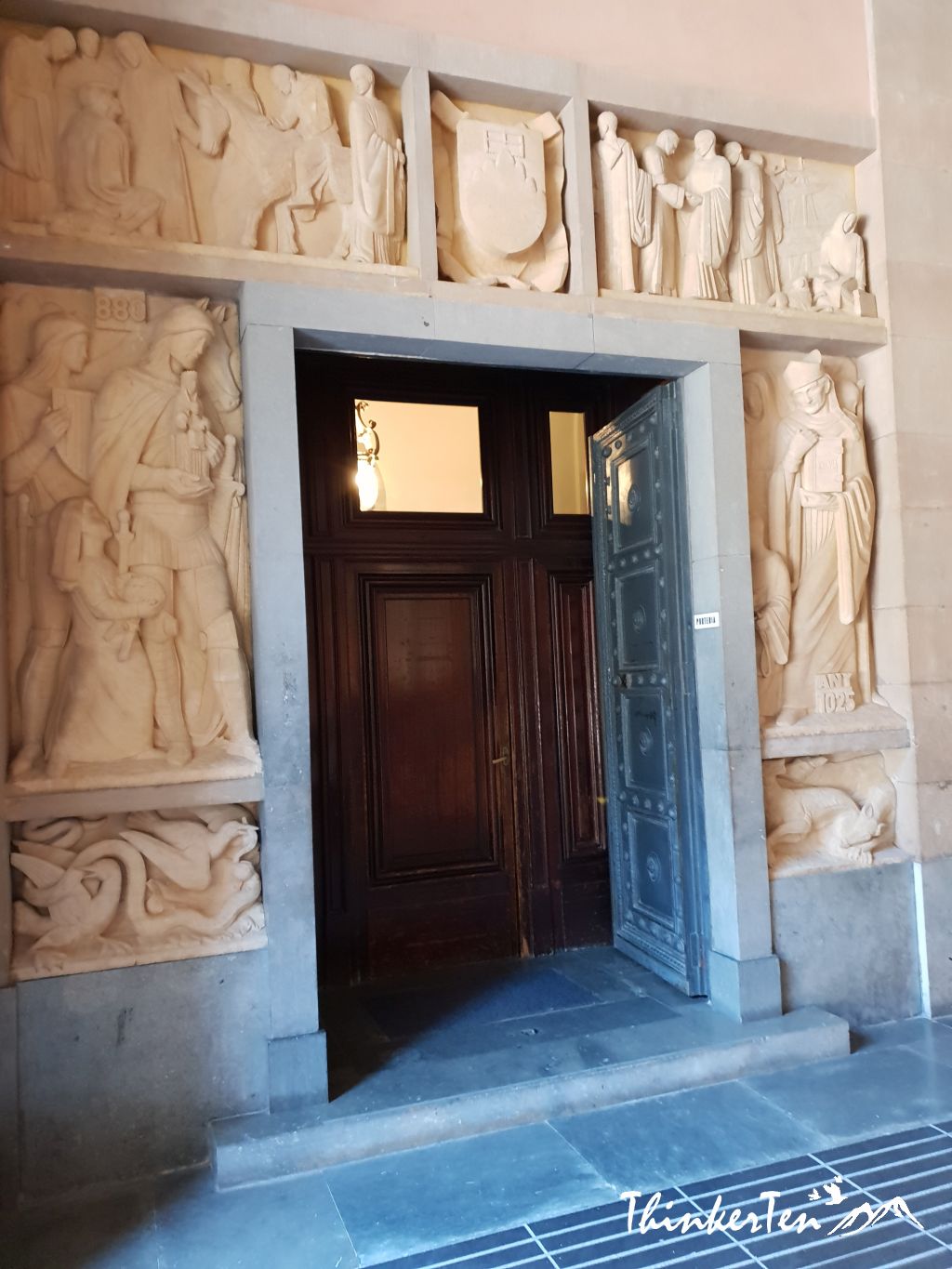 Stay tune for the Bell Ringing

Please wait for the bell-ringing which starts slightly before 11 am. You will be struck by the sound of their bell tower ringing from the mountains and reflecting from the rocks and the monastery.  Very beautiful and you will love it. 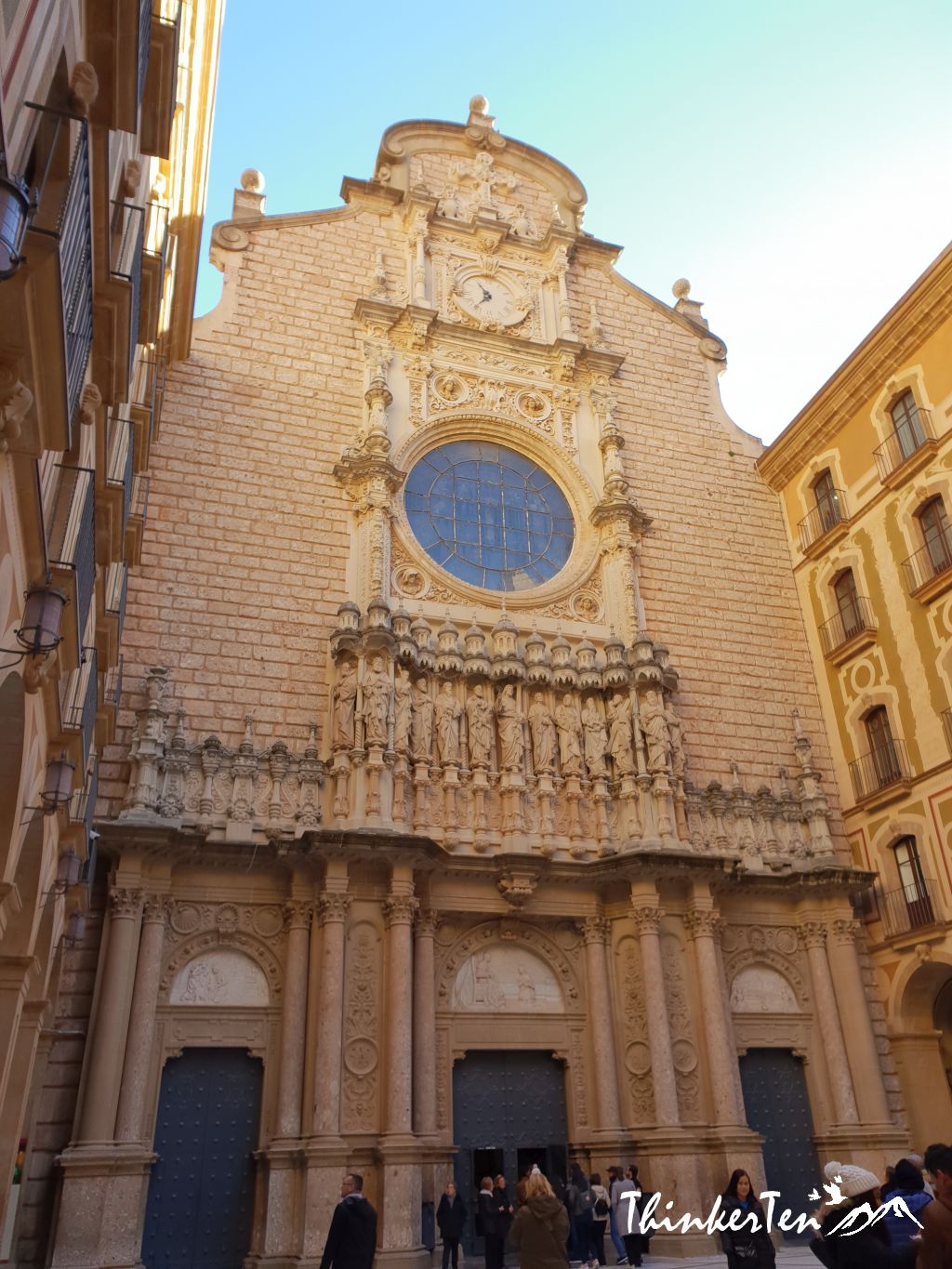 Founded in the 11th century but now the monastery building was rebuilt in the 19th and 20th centuries so you find it quite new and polish.

We were told the monastery is still active and home to around 80 Benedictine monks. We saw them walking around with the area. 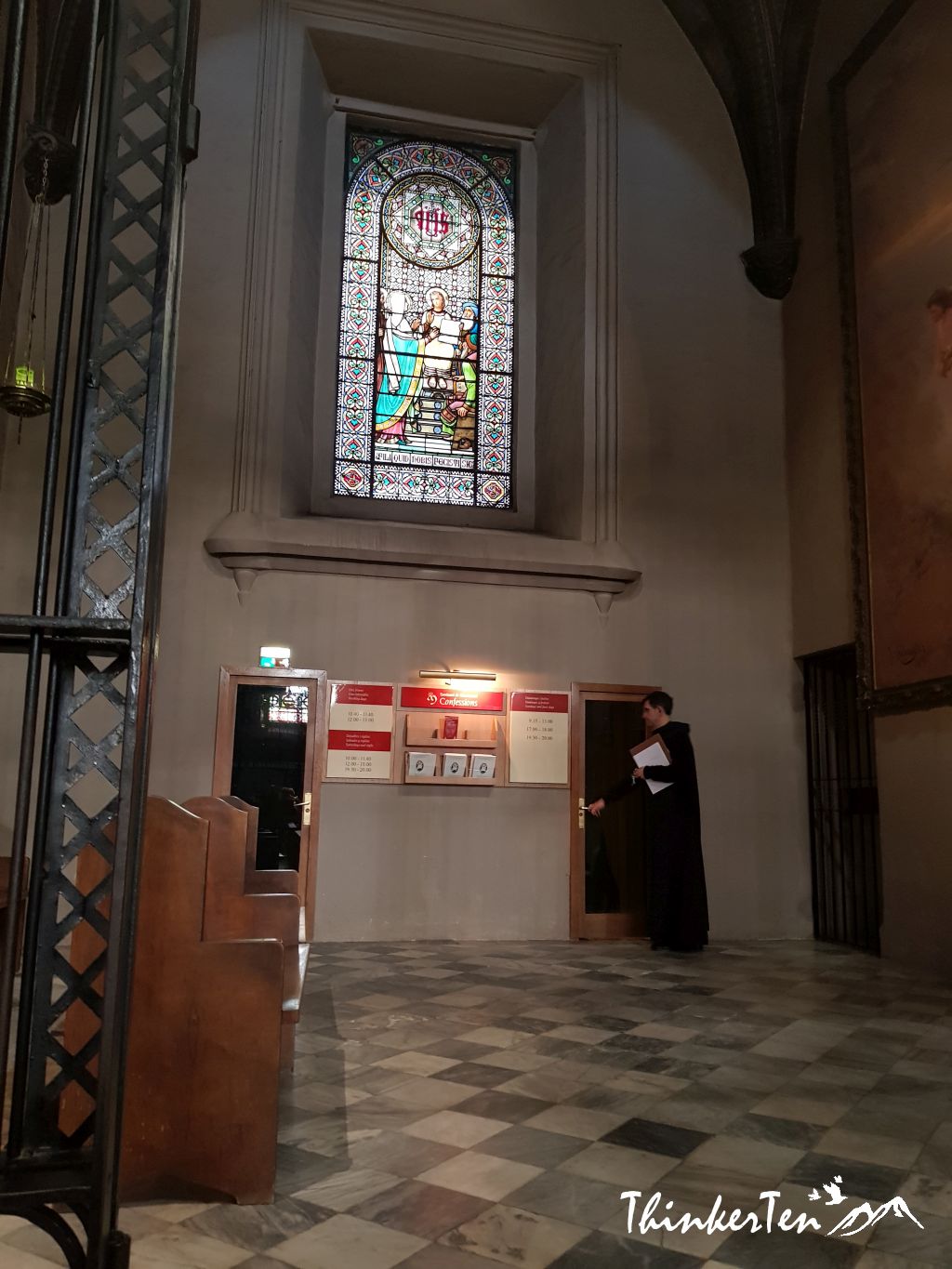 Should I attend the Masses at Montserrat?

Daily masses are available, I remembered there was one at 11 am and we quickly went out of the Basilica as we do not intend to attend the masses as we are non-catholic. 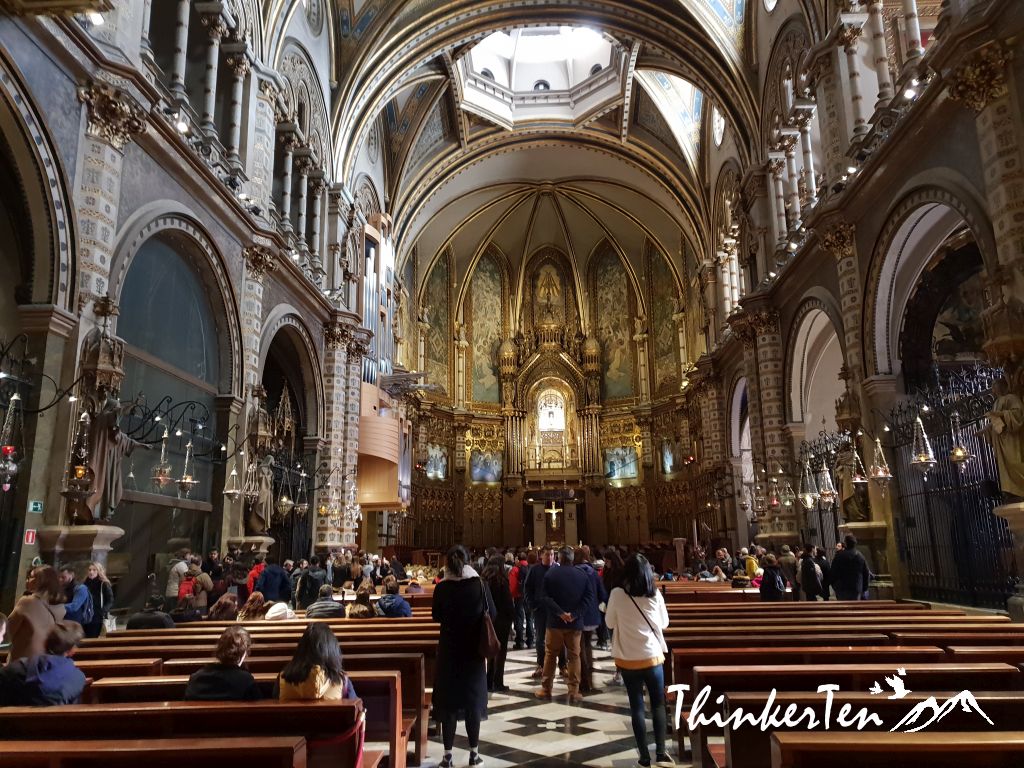 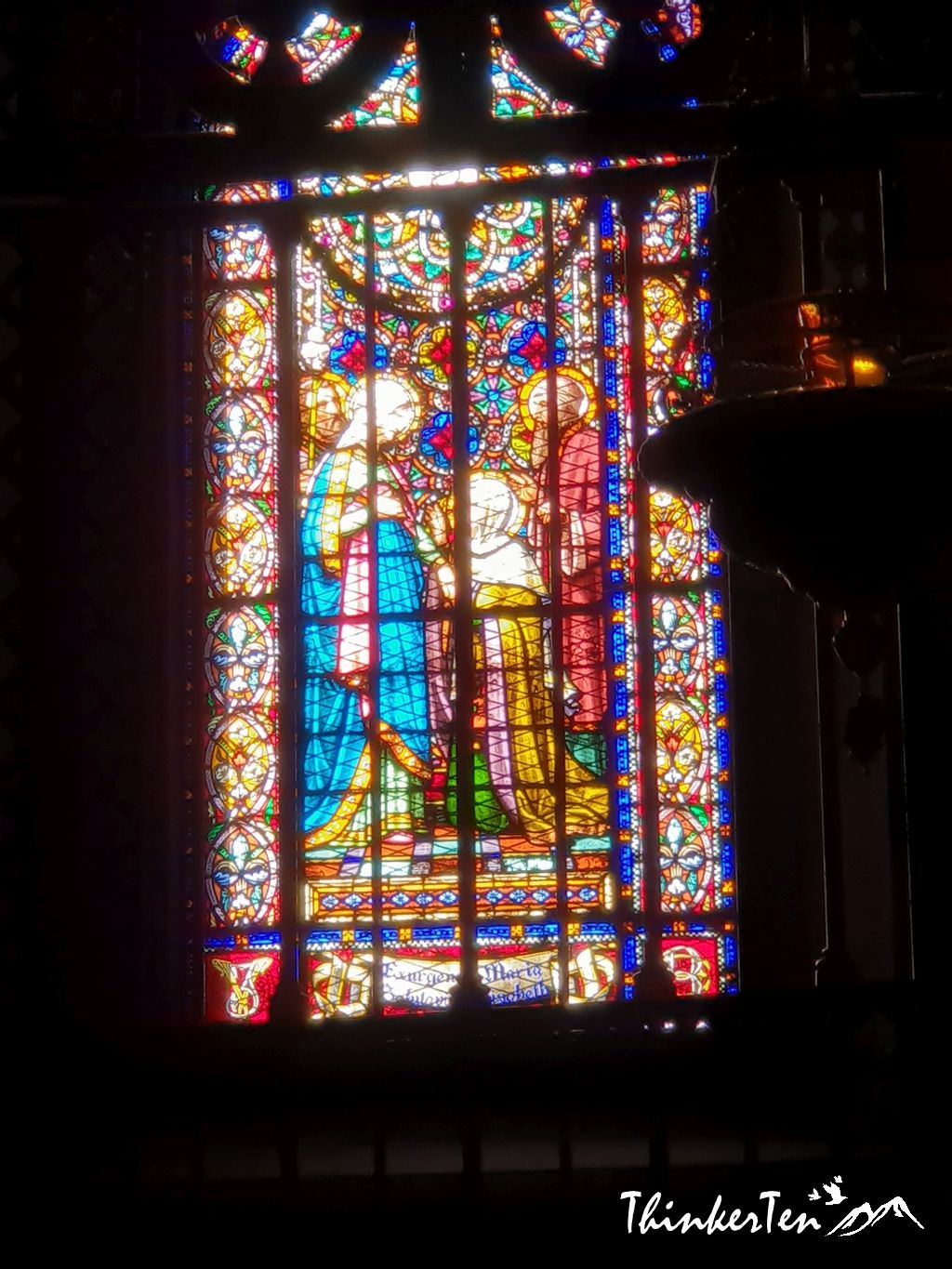 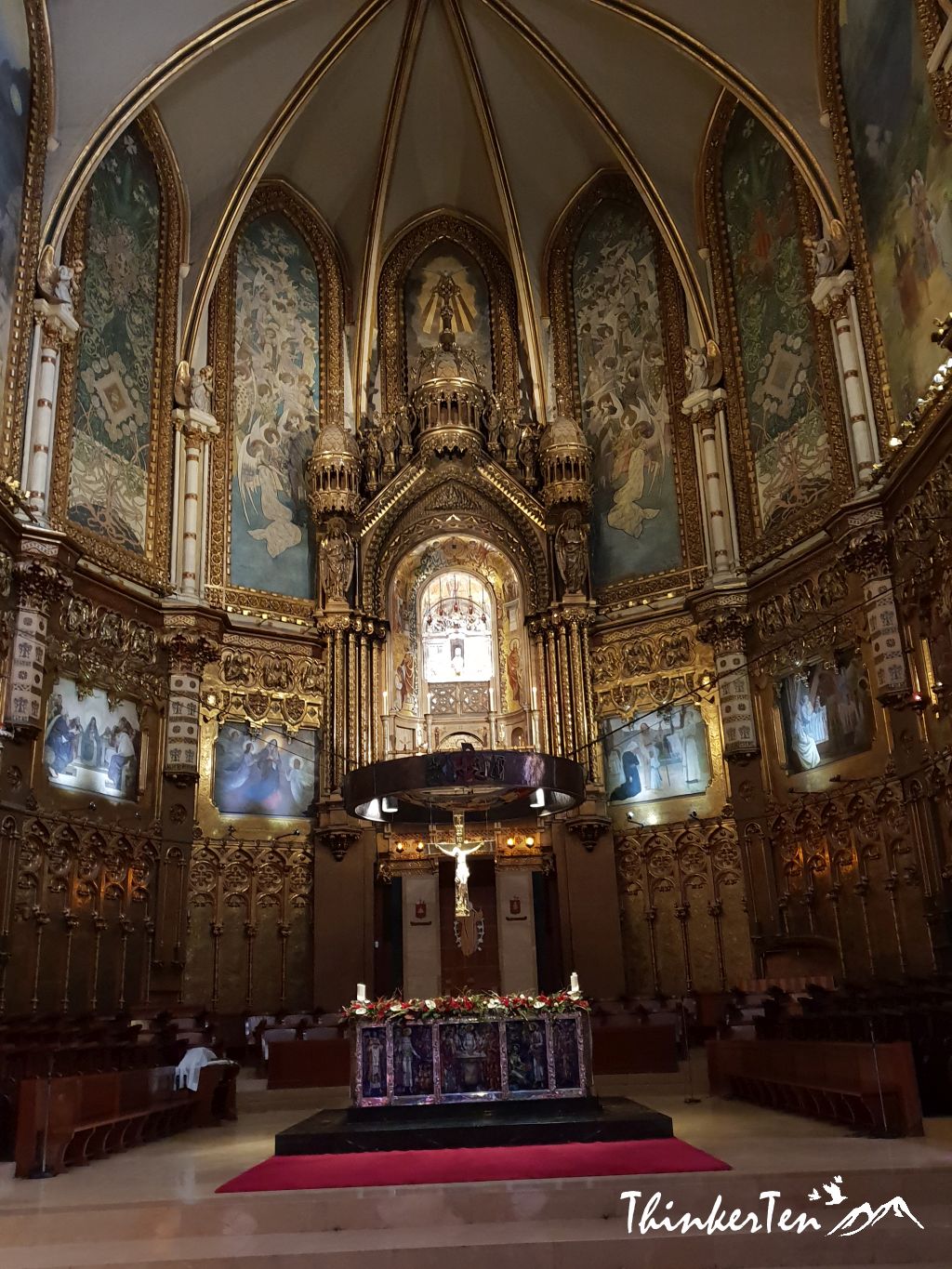 Let’s find out this little star statue of Black Madonnas

The statue of the Black Madonnas with both the statue of Marry and Jesus having dark skin gold robes are one of the highlights here. You will see she is sitting on a thrown and holds an orb in her right hand. There might be a line with a group of people who have come as pilgrims to the statue.

According to legend, during a Muslim invasion, this statue has been hidden by devotees in a cave. Years later, a group of locals saw lights and heard songs in the middle of the cliffs, where “La Moreneta” had been hidden. The bishop wants to transport the Virgin Mary to the city of Manresa, but it was in vain since the image was extremely heavy. He assumed the fact as a request of the virgin to remain in that same place. To house the acclaimed image, the bishop ordered to build the famous Monastery of Montserrat!

Ave Maria path is full of colorful candles lit up by visitors for the Virgin Mary with small donations fees. 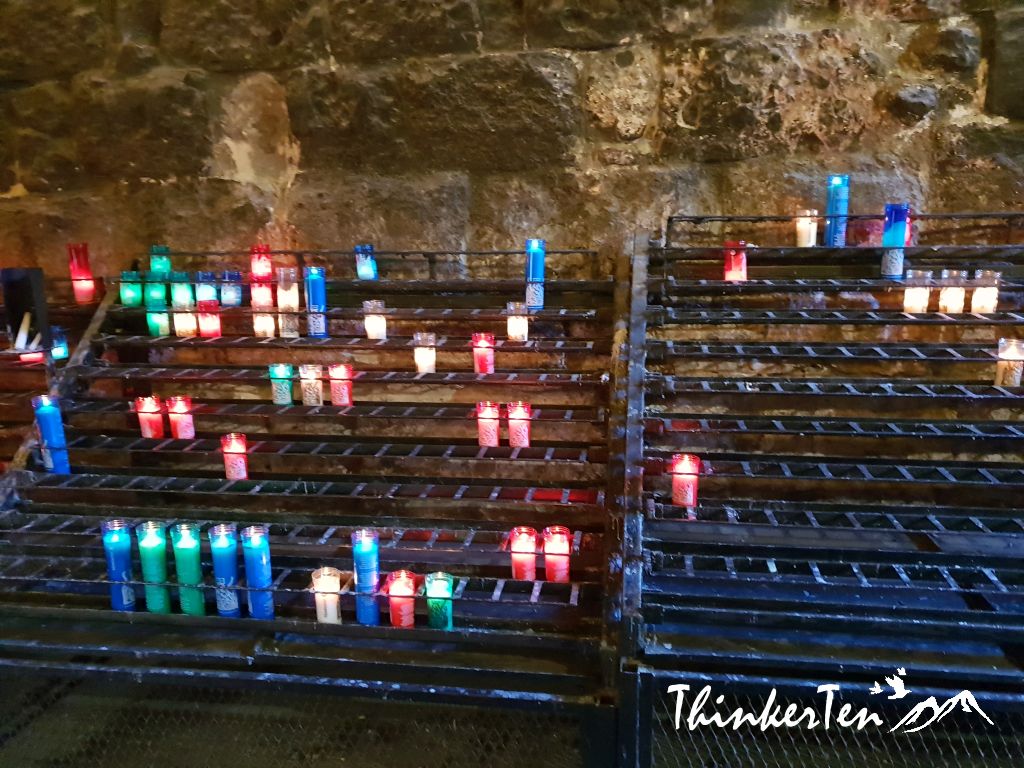 The church is famous for its boys’ choir, called the L’Escolania. Performing twice daily in the Basilica. If you are lucky you will have the chance to see the performance from some of the most talented young voices in Spain. 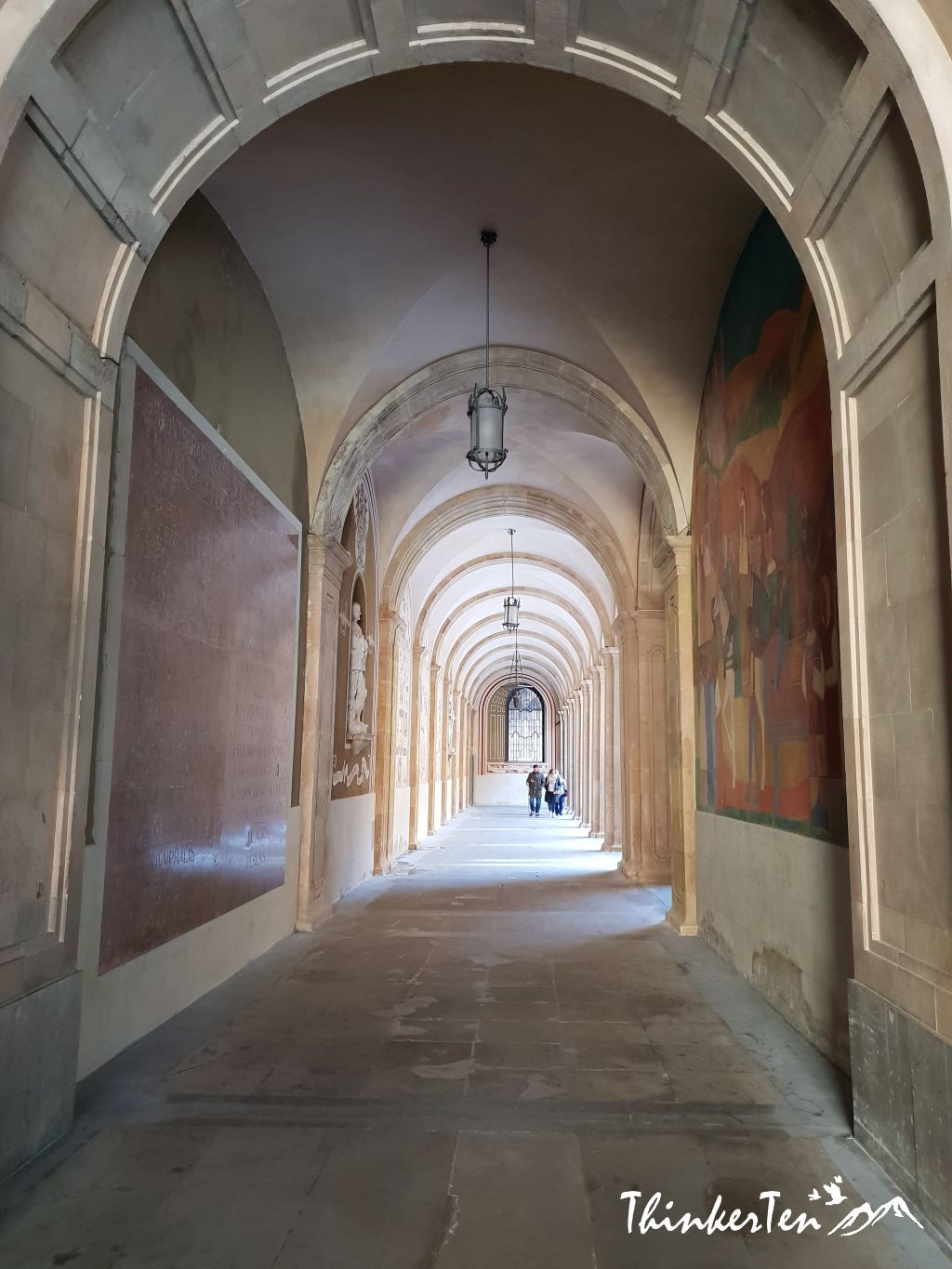 Montserrat is a great place to get away from the crowded city of Barcelona. You find the scenery here so unique and not the kind of the mountain you have seen elsewhere. 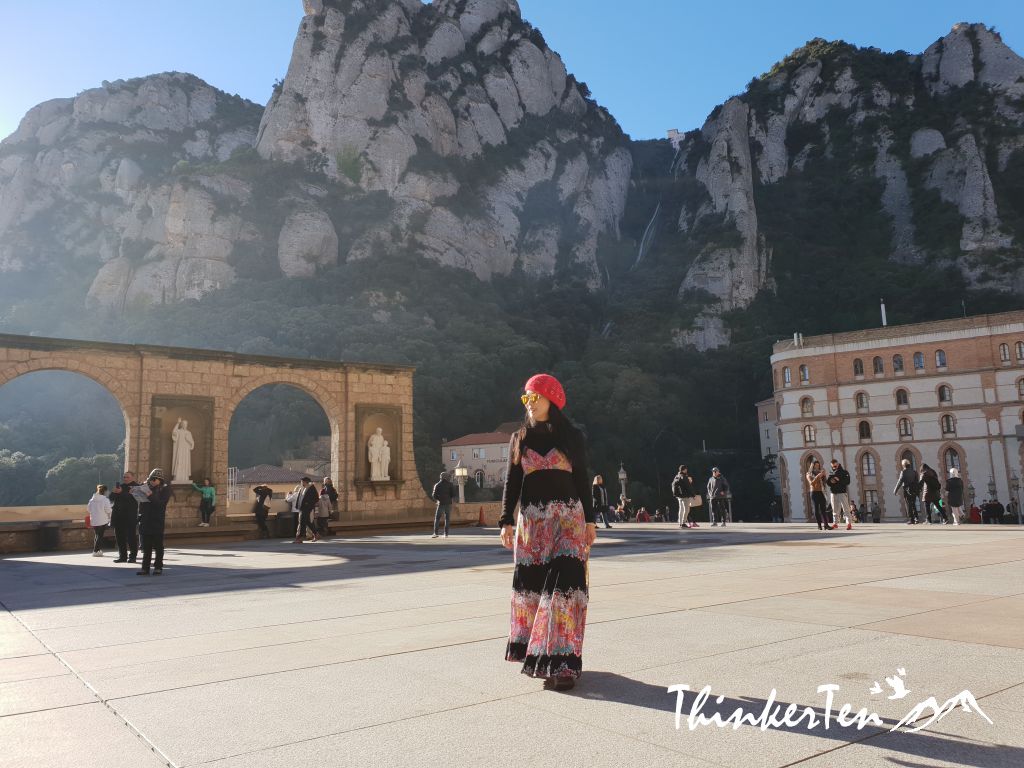 What you would see in Picasso Museum in Barcelona?

Always devoted to Our Lady, there is an aura of mystery around the black Madonnas scattered around the world. I did not know this sanctuary, but I would like to be able to visit it.

I haven’t been to Barcelona in about 30 years. This makes me want to go back, there is so much there.

Barcelona is such a gorgeous city filled with great architecture, food, music and so much! I can’t wait to return.

I wanted to visit Montserrat when we last went to Barcelona but we ran out of time, it looks stunning

I haven’t made it to Spain yet but would love to. Will have to do all of the overseas traveling after having babies.

I am a Christian and love visiting churches when I travel. I would love to head to Montserrat to discover the church, arhitecture and town, not forgetting the mountain filled view

It’s my dream to go to Barcelona someday. Wish it can be done soon..

What a stunning place to visit…the monastery is absolutely beautiful and the basilica is breathtaking. I’d love to take this tour one day.