Where is the Temple of Hatshepsut? 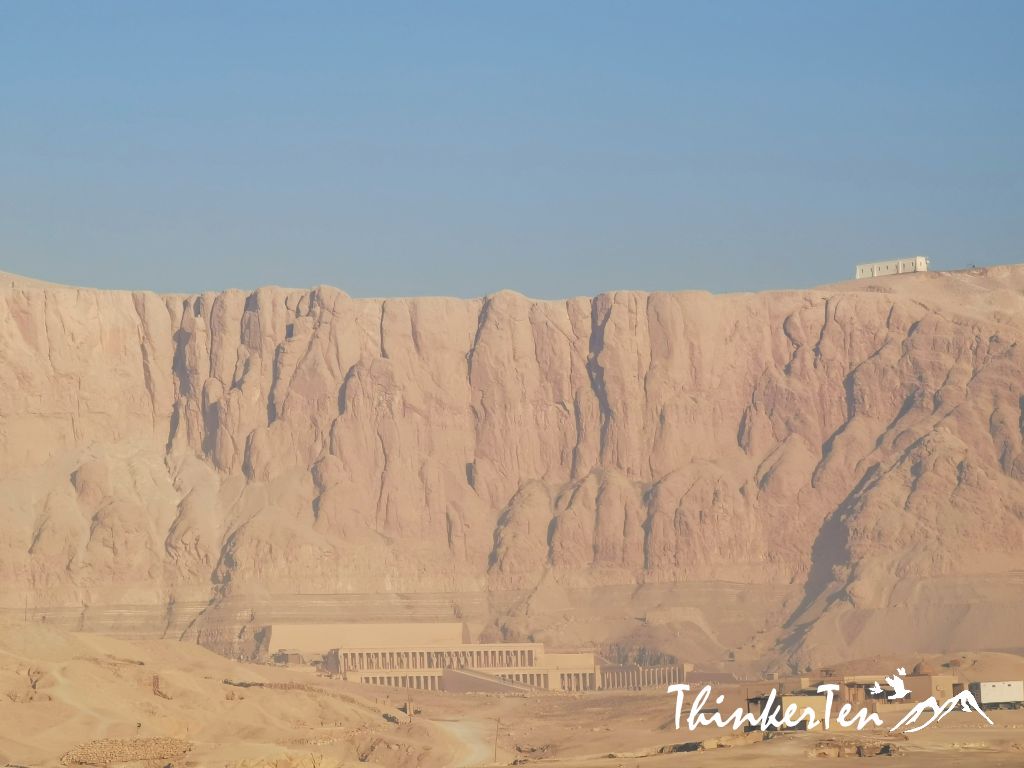 Vlog of Hatshepsut Temple in Luxor

You don’t get many female Pharoah in Egypt but Hatshepsut was a famous female Pharoah that came to the throne of Eygpt in 1478BC. She ruled for a long time, about 20 years and considered one of Egypt’s most successful pharaohs.

How do you pronounce “Hatshepsut”? 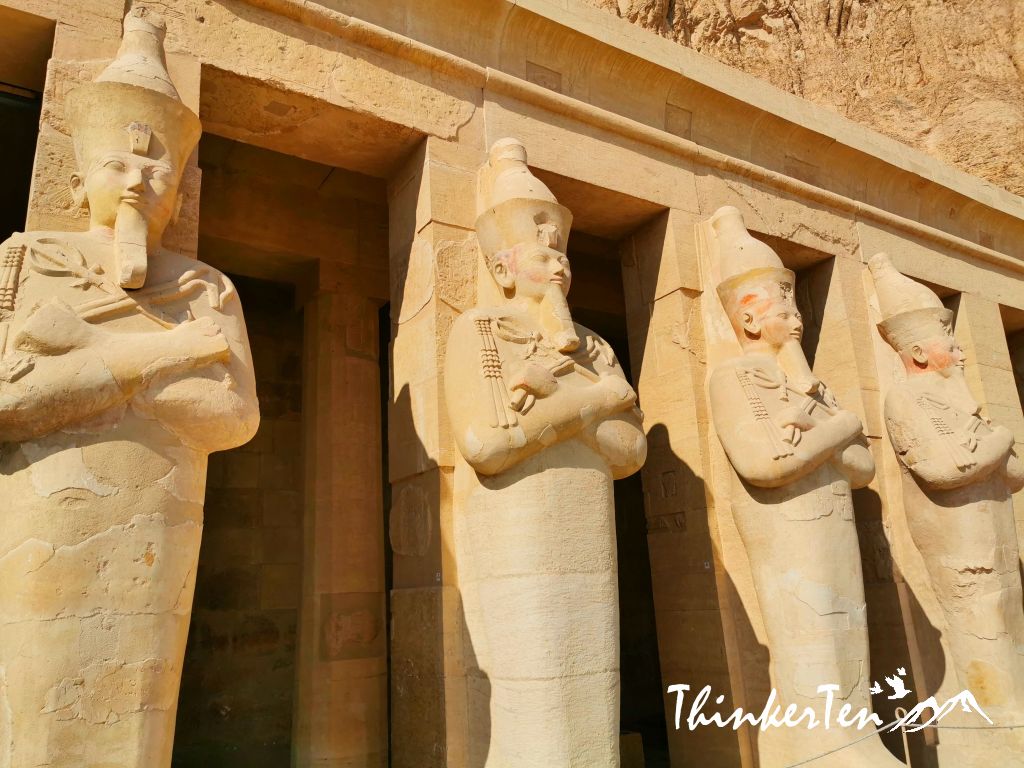 Some background of Hatshepsut

Hatshepsut wasn’t born Pharoah. Since she is a female how did she become a Pharoah of Egypt?

Well, Hatshepsut was from a royal family, a daughter of King Thutmose I, Hatshepsut became queen of Egypt when she married her half-brother, Thutmose II, around the age of 12. After her husband died, she began acting as regent for her stepson, the infant Thutmose III (son of Thutmose II with another concubine), but later she took on the full powers of a Pharoah. Hatshepsut and Thutmose II had no son but a daughter.

Should you walk up to the top?

The Hatshepsut temple was grand and was carved in a mountain. The view of the temple from a far distance is quite astonishing. This place is always busy and full of tourists. It was very hot even in the month of December since it was surrounded by deserts. The heat is unbearable so carrying an umbrella is a good idea.

There are a lot of steps and a long distance to walk up to the temple. Ramped access is also available on both sides of the steps. The temple looks very impressive from the outside but not when you are inside. Only several imposing statues and some paintings still exist, but most were damaged. Nothing really left inside the temple.

If you can’t afford to walk the steps, just look at the temple from outside. The building itself, viewed from a distance is stunning but not when you are up close. 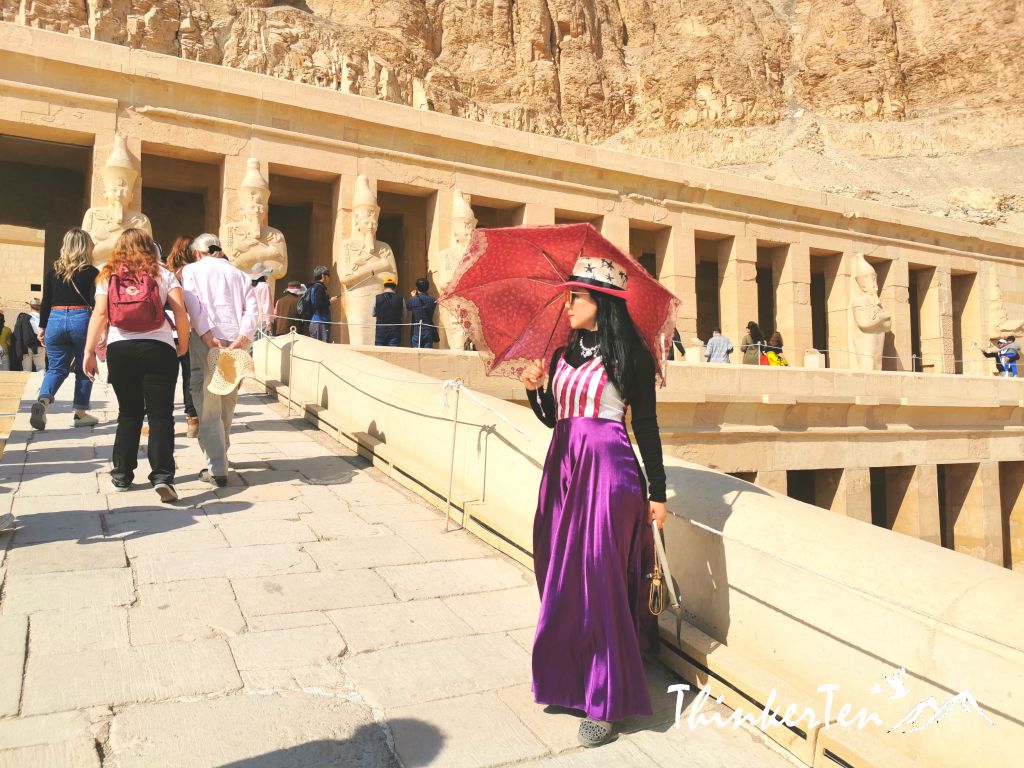 Why did Hatshepsut wear a fake beard?

In order for people to accept her as pharaoh, Hatshepsut began to dress like a pharaoh. She wore the pharaoh’s headdress with a cobra. She even wore a fake beard and a short kilt like the men wore. 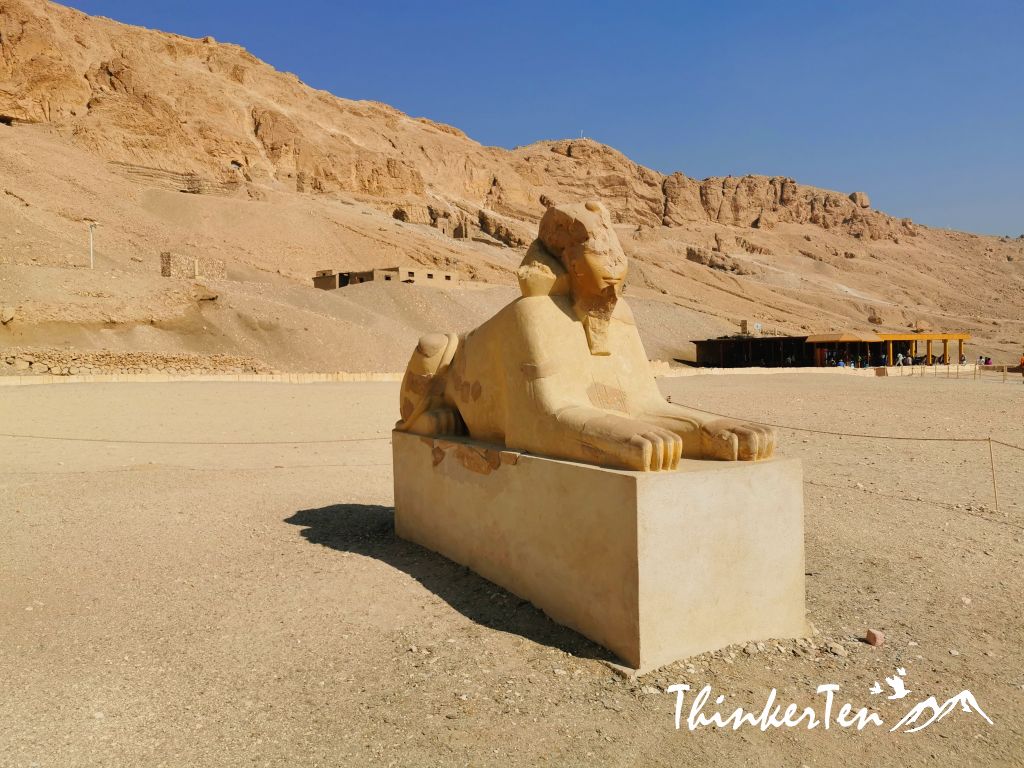 Alabaster is a type of stone found in Luxor. Our guide brought us to a local Alabaster factory near the Valley of the Kings. Alabaster comes in three colors, dark green, tannish-yellow, and white. One of the reasons that alabaster is prized is due to its translucence and the effect of the light passing through the soft stone.

Before we enter the shop, there are workers demonstrated the tools and how they drilling into the alabaster. It doesn’t seem very complicated but looks tiring. You can see the workers’ faces also cover with sand dust as they spend the whole day shaping the alabaster. 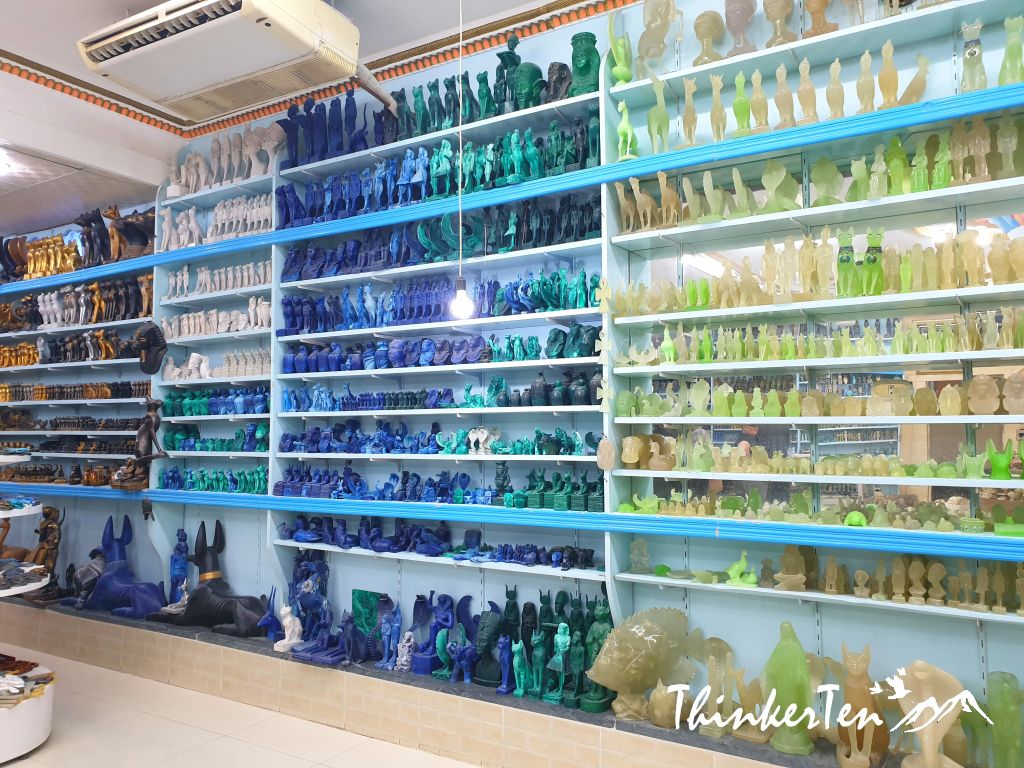 The Alabaster Green looks interesting, the staff turns off the lights of the shop to let us see the glow of the green color stones in the dark.  A big “wow” from all of us. 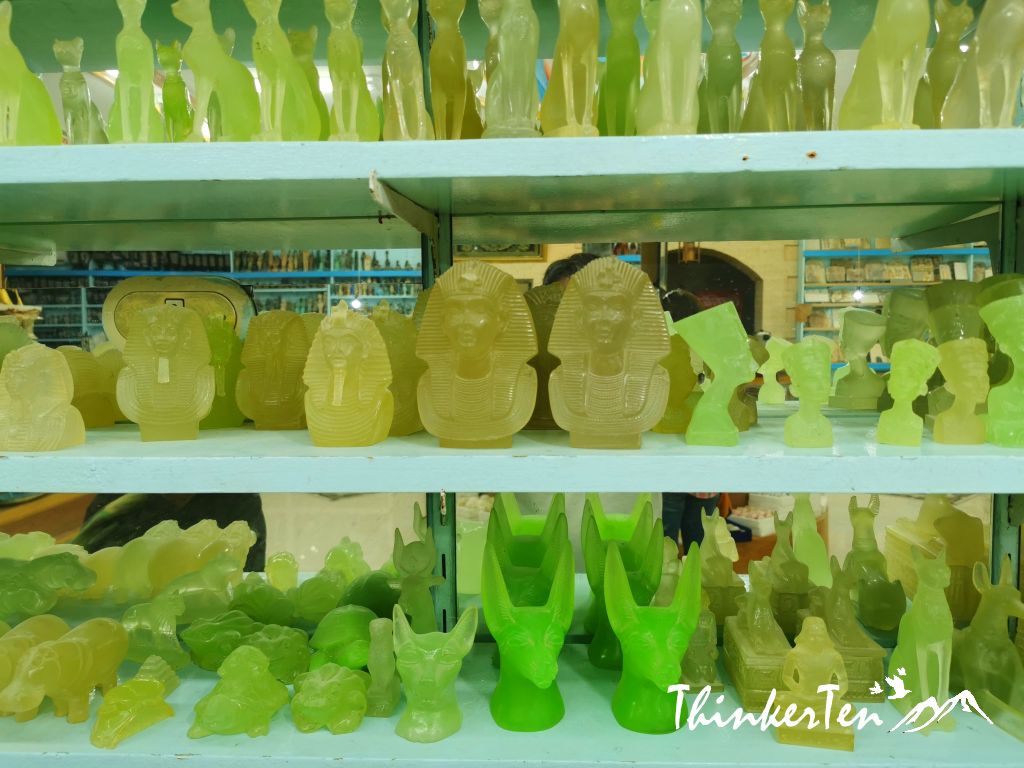 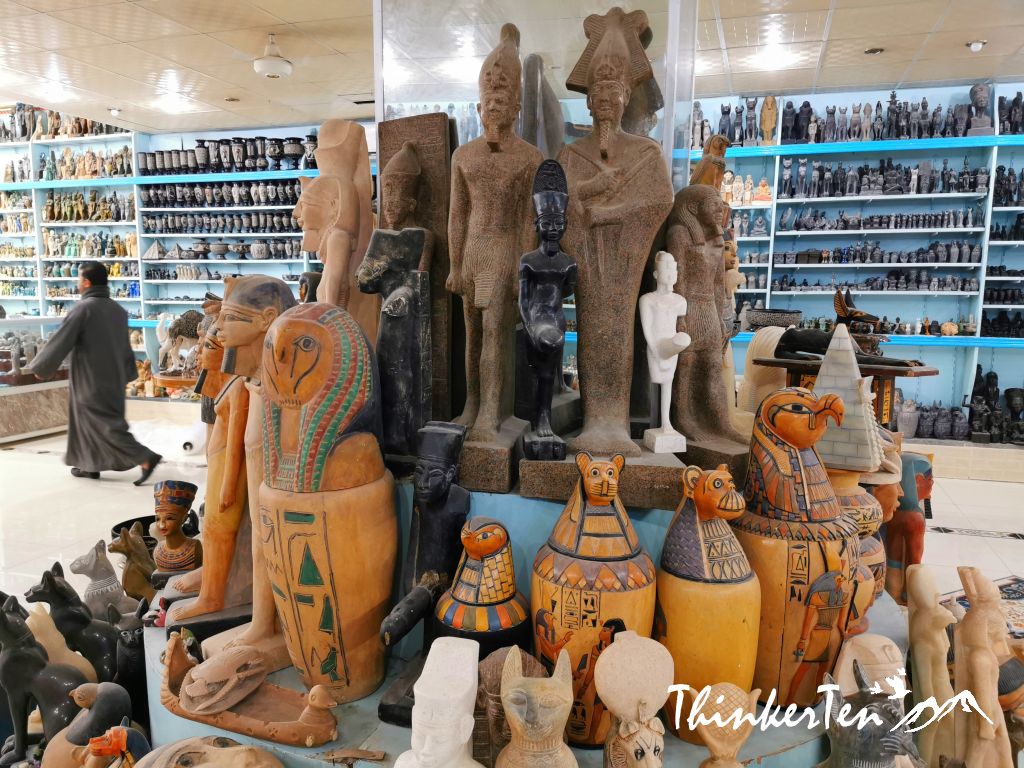 If you are planning to visit Egypt, please study some of the histories of this country before you come. This will make your trip a lot more meaningful and you will enjoy more of the journey.  Hatshepsut temple viewed from a distance is stunning but not when you are up close.  That means you could skip the steps and walking up if you are less mobile or having bad knees.  I would suggest you save your energy for other sites in the Valley of the Kings and Queens.   There are so many sites here.

You can still view the beautiful architecture of Hatshepsut Temple from the bottom. To be honest, there is nothing much left inside the temple when you are up there.  You will be disappointed when you make it to the top.  Trust me.  As I said, it is nicer to look from a distance.

However, If you are fit and strong, then by all mean to go up, walk all the steps up with other tourists crowds and soak in the atmosphere of Hatshepsut Temple. It is hot, be prepared but you will love the atmosphere. 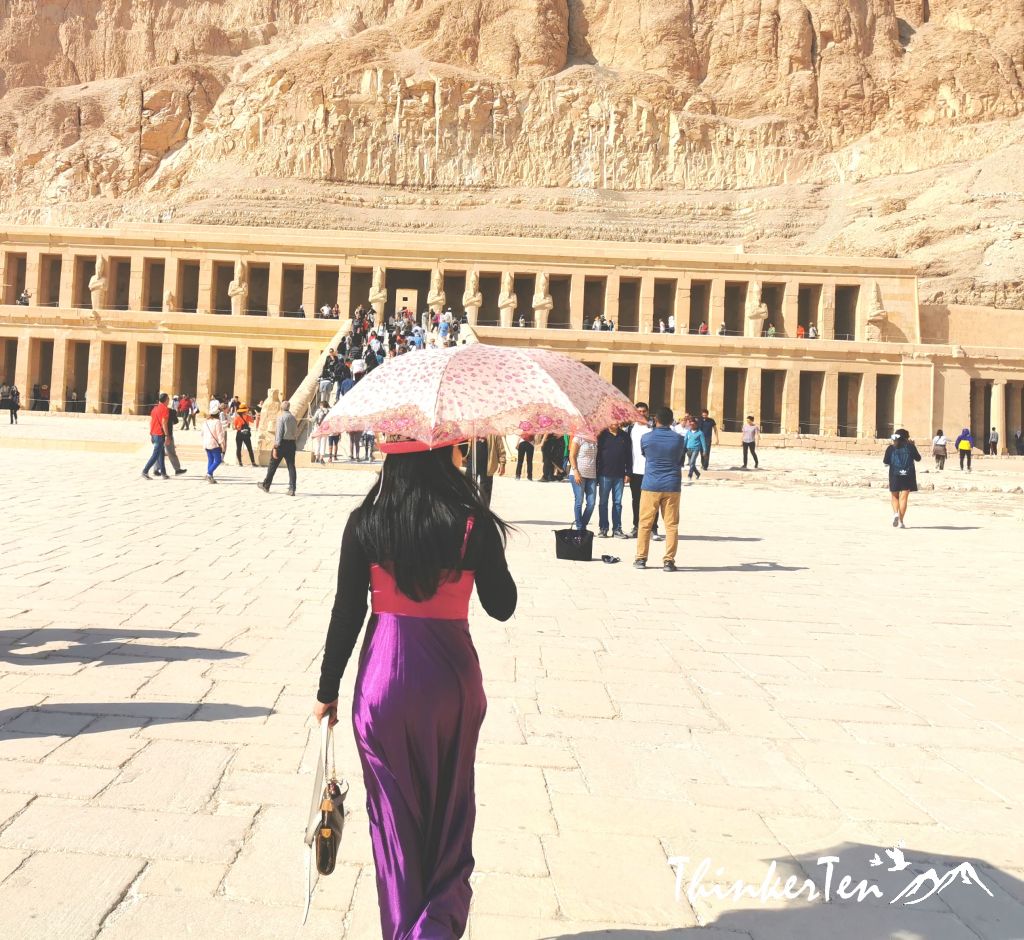 What to expect on Luxor Hot Air Balloon in Egypt!

This is a beautiful post and this is for sure on my bucket list of places to visit as I love history and all that its entails. The pictures are gorgeous and I for sure will have to get here to visit soon 🙂 I am so overdue for a vaca!

This is magical!!! I can’t imagine how it must be to be in front of such a beauty. Amazing…

a lovely post of Egypt travel, always in my to travel list, hmm…unsure when I can realise this travel dream. Thanks for this sharing with all the lovely captures. cheers, siennylovesdrawing

What a neat place to visit. That temple looks so well preserved! It is interesting to see what kinds of things are sold there as well.

oh, my goodness! What a spectacular place…would love to visit there someday. Your outfit looks gorgeous.

Loving this post. I have always wondered what it would be like to travel to Egypt, the things I would see. I really felt like I was on this trip with you. I can’t wait to experience this.

I cant imagine seeing Egypt. It is SO ancient and its been around far longer than anything I’ve ever seen in person.

Wow, this is stunning. We’ve never visited Egypt but would love to.

Such lovely pieces they have on display. The vibrant colors are enticing to the eyes

UGH…guess I’m adding this to my bucket list too! This looks STUNNING.

What a beautiful site to visit. It is rich with history.