We did Karnak Temple and Valley of the Kings in a day when we were in Luxor. In the morning we explored the Valley of the Kings then went back to our cruise to have our lunch while the cruise sailed to Karnak temple. Karnak Temple sits opposite sides of the River Nile so it takes a longer way by road.  The good thing to do Nile Cruise is you have all your meals, breakfast, lunch and dinner on the cruise.  Nile cruise is like a moving hotel.

Luxor is an important city in Southern Egypt and it has lots of ancients Egyptian ruins and sites. Luxor also has the world’s largest open-air museum.  We were glad that we did the hot air balloon early morning to view the open-air museum from the top.  Just like other important cities in Egypt, Luxor sits on the River Nile. It is about 700km south from Cairo. 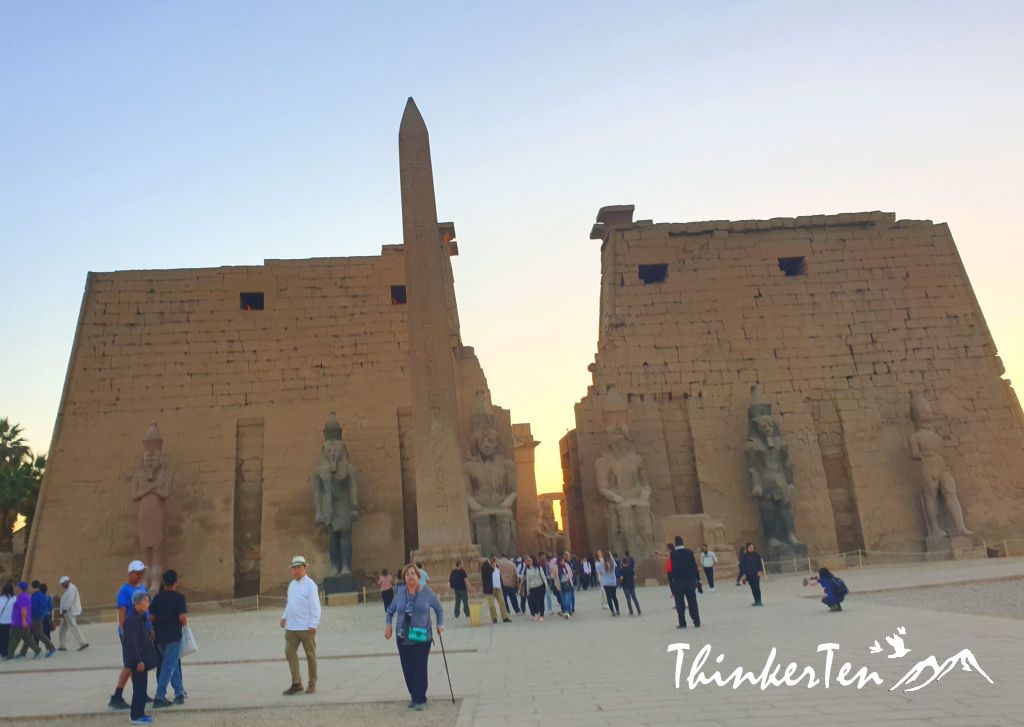 Karnak Temple has several sections to visit, it is big. The temple was built by Ramesses III, one of the important Pharoah who has ruled for about 31 years during the “New Kingdom”. He built many impressive buildings and has a good military. You will see all these “evidence” in Karnak temple.

There are also three primary kingdoms that historians use to define periods of Ancient Egypt. The three kingdoms were the Old, Middle, and New Kingdoms.  (Hatshepsut was also from the new kingdom.) 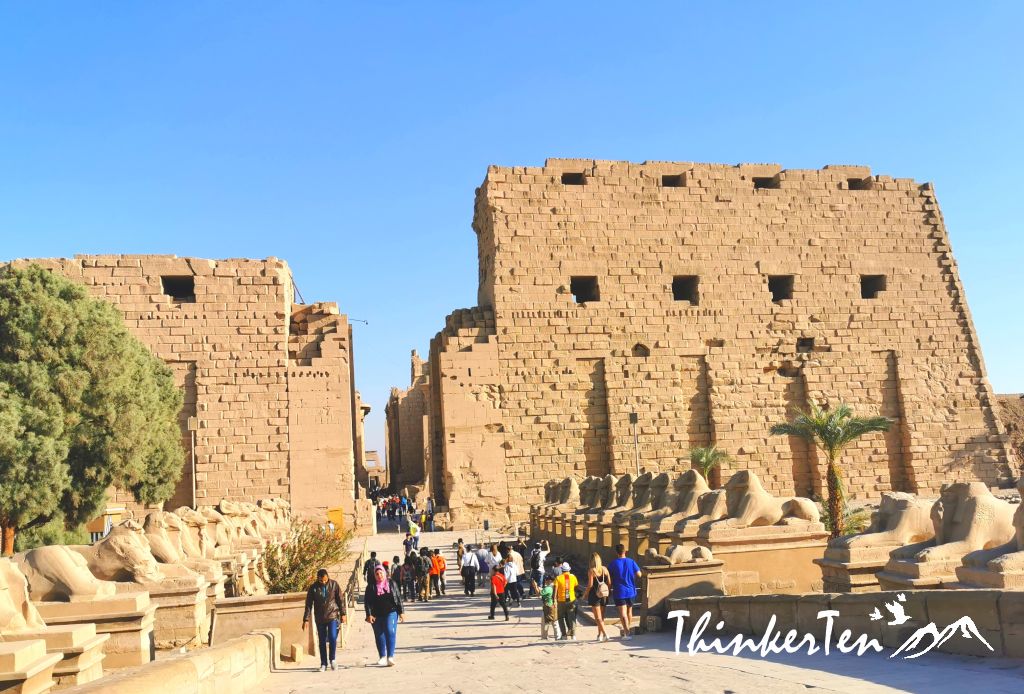 Pay attention to this big statue who is Ramesses II, it shows the king stand to wear the double crown which means he ruled both upper and lower Egypt. At his feet, you will see a little statue who is his wife. 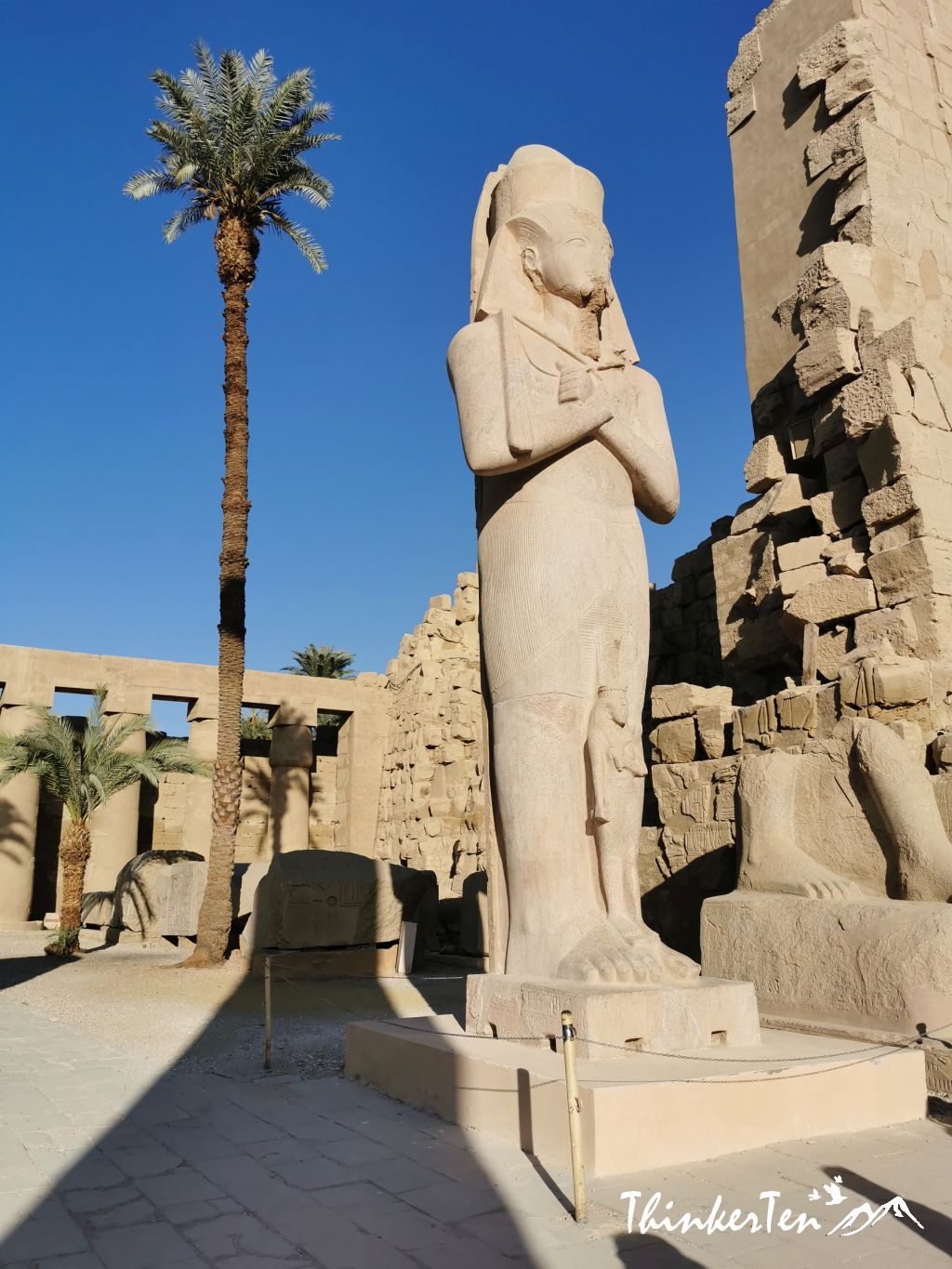 In The Great Hypostyle Hall, there are 134 giant columns. The 12 taller central columns are almost 70 feet high.  You will be amazed to look at the giant columns built in ancient time, how did they do it? 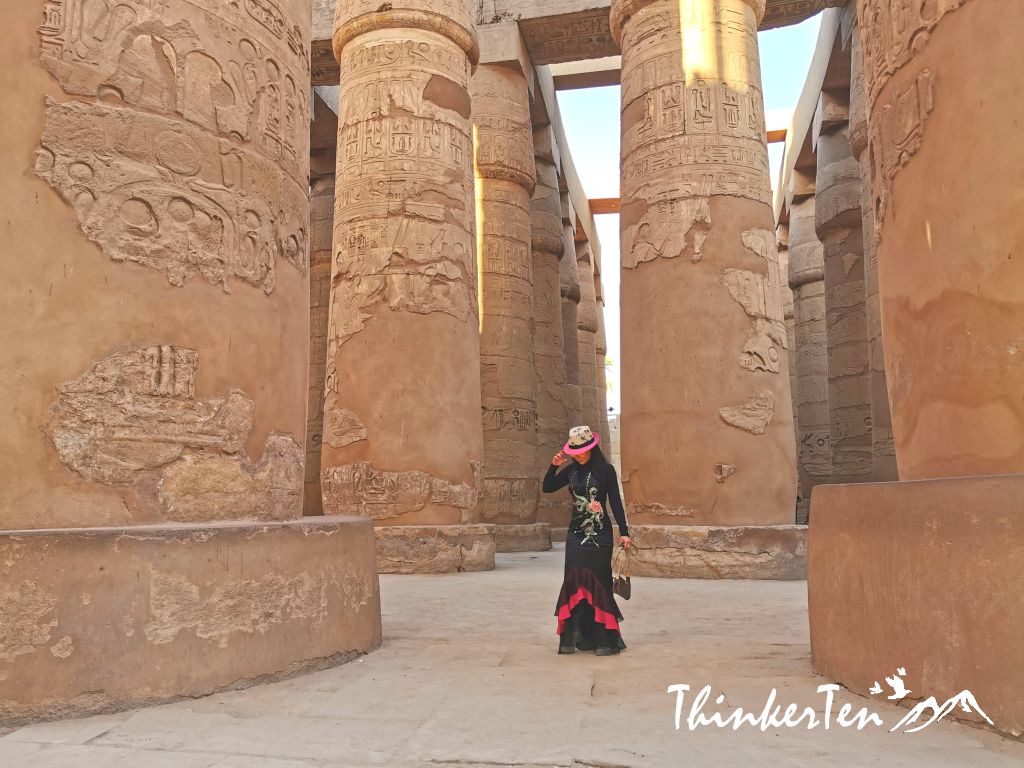 Karnak temple is not built not only for gods but also for Egyptian rulers who wished to be memorized. The place is so massive, covering 200 acres and was the place of pilgrimage for nearly 2,000 years. Many pharaohs added their own constructions here. Primary, it was built as a temple dedicated to Egyptian god & Goddess – Amun, Mut, and Khonsu by Ramesses III. 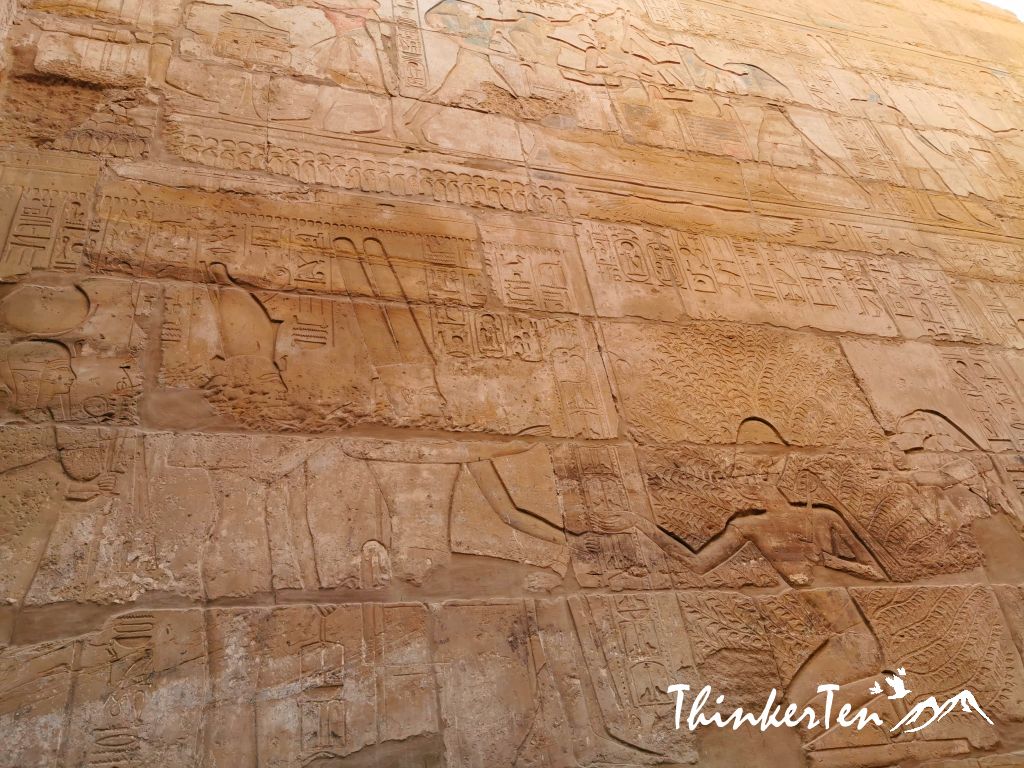 The mysteries of Karnak temple can be discovered from the written wall. Your guide will reveal all the stories behind it. 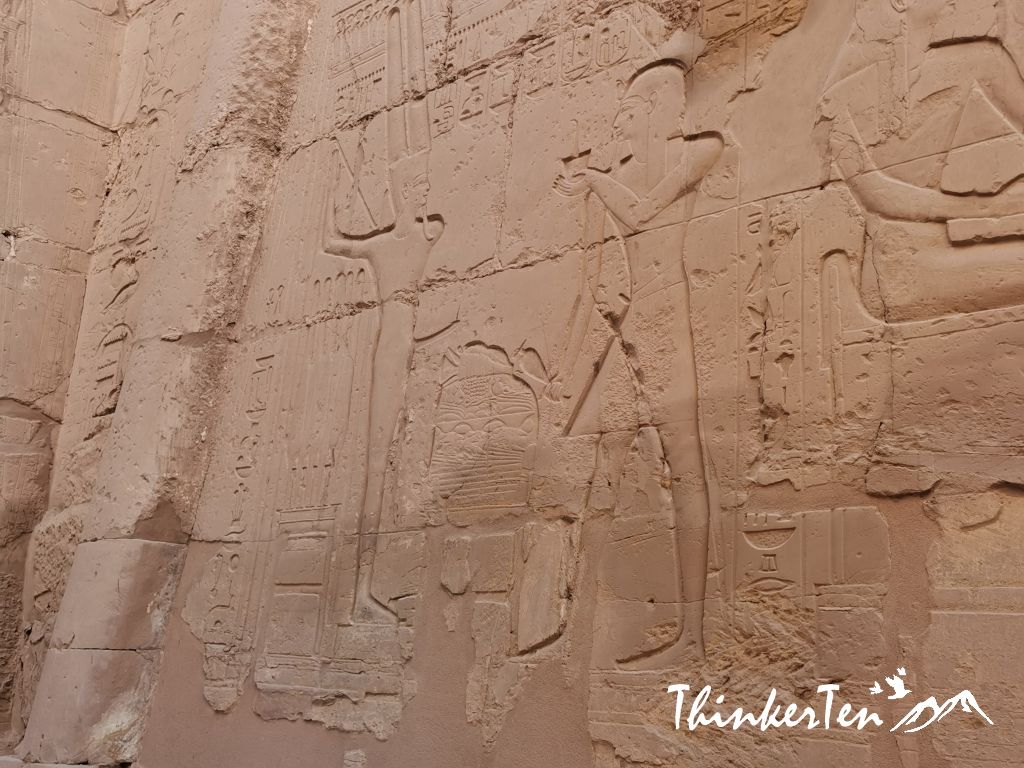 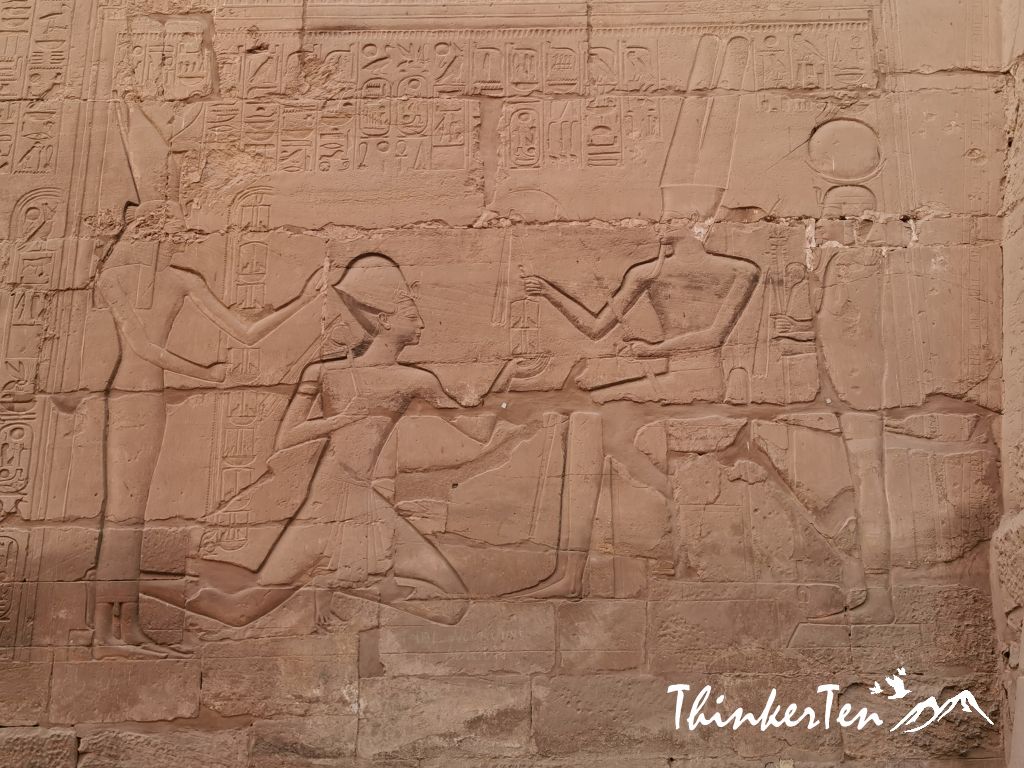 The very first obelisk was built by ancient Egyptians.

They like to place pairs of obelisks at the entrance of their temples. The columns were associated with the Egyptian sun god, and perhaps represented rays of light.

Usually, an obelisk is made from a single piece of granite stone and granite is very hard to shape.  They use another type of stone called “dolerite” to shape the granite stone.  Dolerite is said to be as hard as diamond.

In Karnak Temple, you will see a 66 feet high and 143 tons obelisk built by King Tuthmosis I.  Twenty-eight Egyptian obelisks remain standing, though only six of them are in Egypt. The rest are scattered across the globe, gifts from the Egyptian government to have a good friendship with other countries. 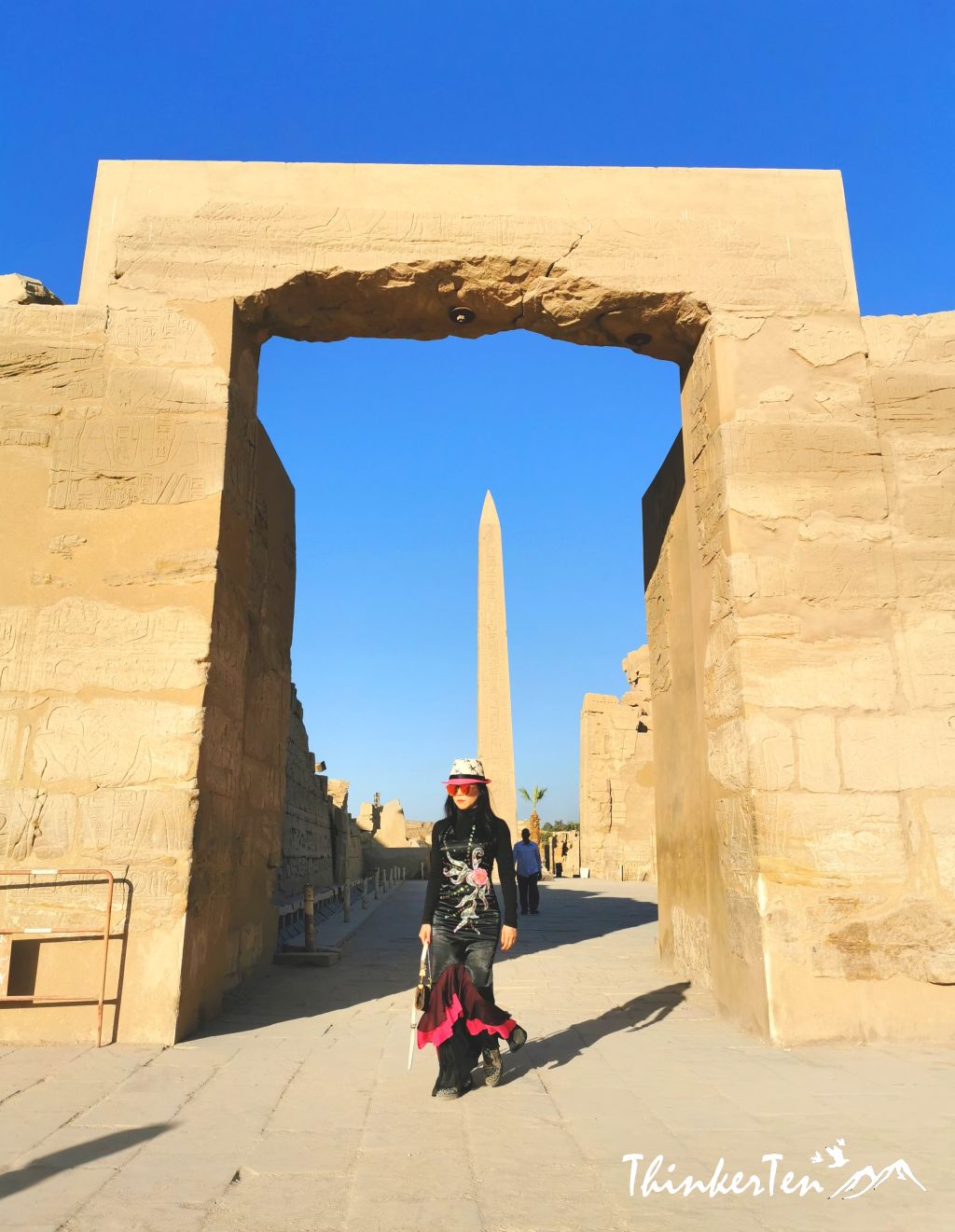 Ancient Egypt hieroglyphics on the wall in Karnak temple

Some tips for you when you visit Karnak temple : 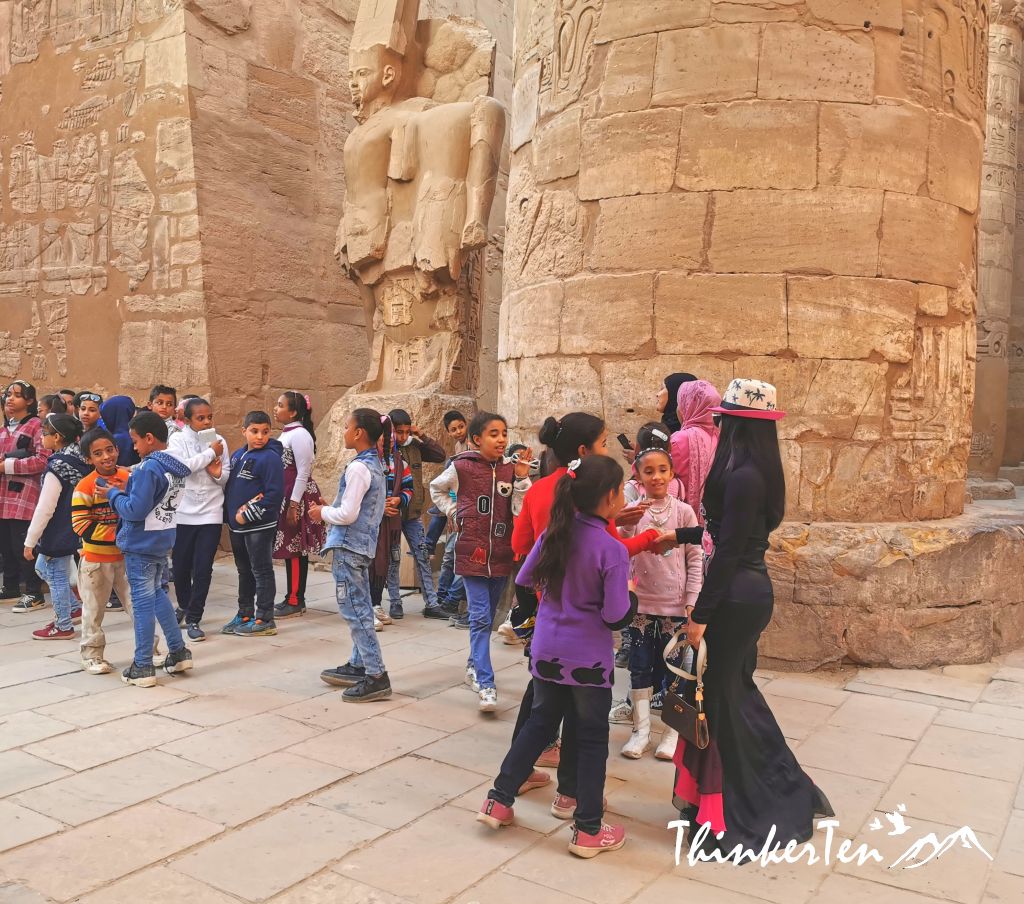 What a stunning and lovely experience this must have been for you and the pictures are stunning! I would be honored and would love to visit Egypt and all of its glory as I a history buff and have always wanted to go there to visit. Thank you for sharing!

These are cool pictures of interesting structures. Thank you for sharing.

I always wanted to visit Egypt. Such an amazing place. Thanks for sharing this. Love the photos.

It\s like something out of a movie! What an incredible sight and place to visit…the ruins are just stunning!

We’d love to visit Southern Egypt and the architecture is so grand! I bet it was a fantastic place to see first hand!

Your posts always make me want to travel more. Egypt looks like a beautiful place!

I would love to visit here one day. What a stunning way to see the city.

I need to get to traveling more. Thanks for sharing such great photos.

Such a beautiful temple. I love visiting historical places. Now I have added this temple to my list ☺

Wow! that looks like an interesting temple to visit. It seems like you really had an amazing time there.