How to visit Edfu Temple

The city of Edfu is between Luxor and Aswan. If you are traveling on the river Nile cruise, either from Luxor to Aswan or vise versa. The cruise will stop at Edfu city.

What to see in Edfu?

Temple of Horus at Edfu is one of the best-preserved temples in Egypt. The temple is located on the west bank of the Nile in Edfu, Upper Egypt.

How to go to the Edfu Temple? 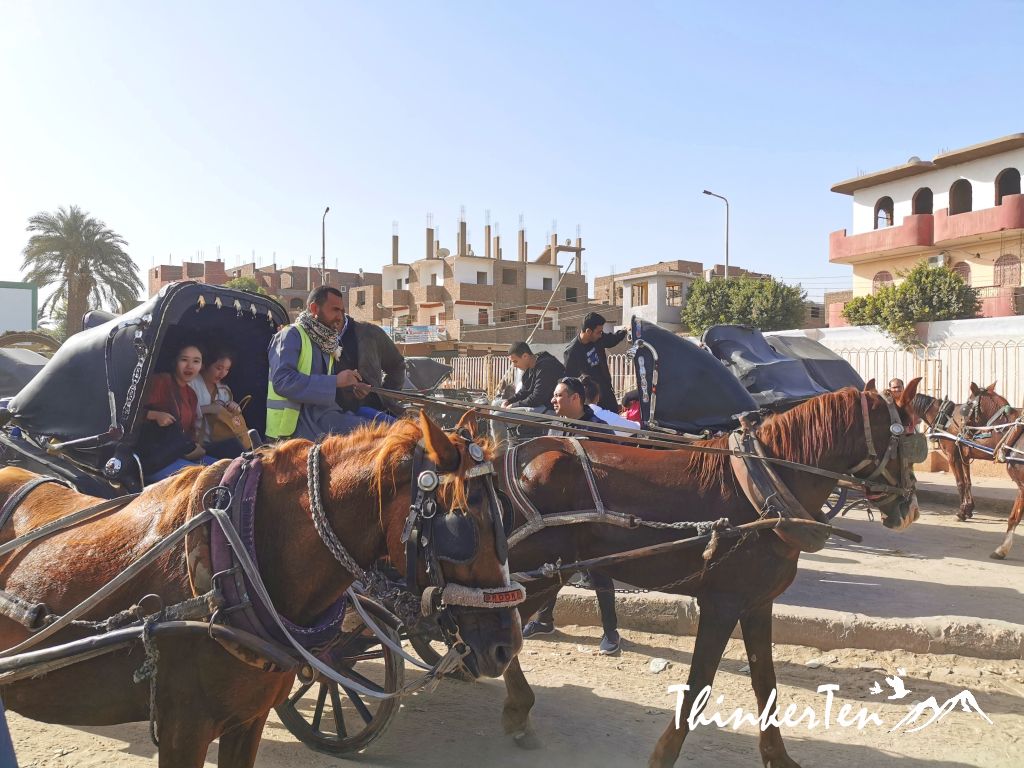 These are the drivers for the horse carriage waiting for the tourists outside of Edfu Temple.  The crowds are huge so please be careful with your belongings. 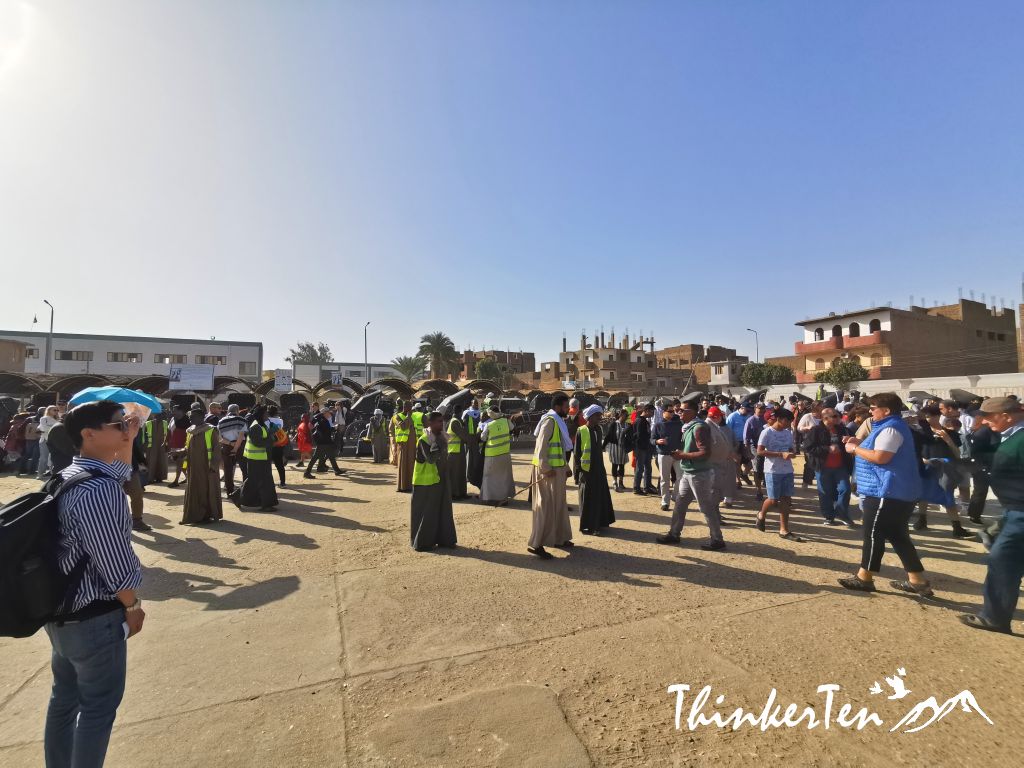 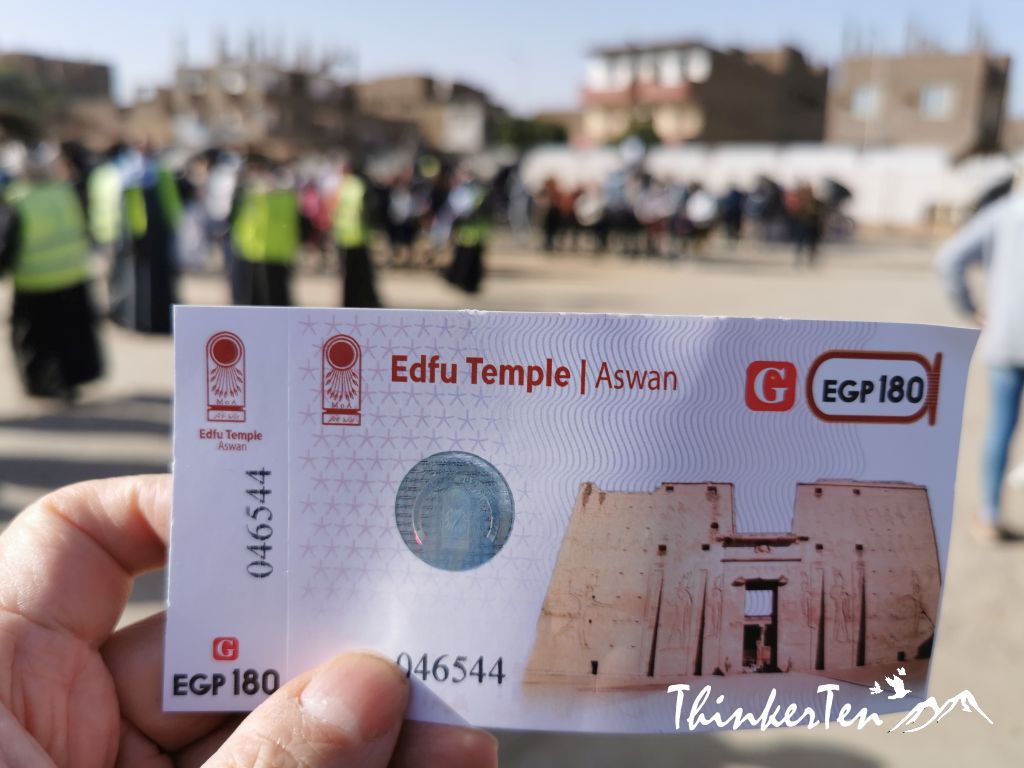 Why Edfu Temple was built?

Edfu temple was built in the Ptolemaic period between 237 and 57 BC. It is one of the best-preserved temples in Egypt. The temple was dedicated to the falcon god Horus, the son of Isis and Osiris.

Why the Pylon is still in good shape?

The construction of the temple took about 180 years to complete, it is grand, especially at the entrance. The gateway is still in one piece and quite complete as compared to other monuments that I have visited in Egypt for the past few days.  The temple is more intact than others as it was once buried in sand in the desert but later discovered by a French archaeologist 1860. 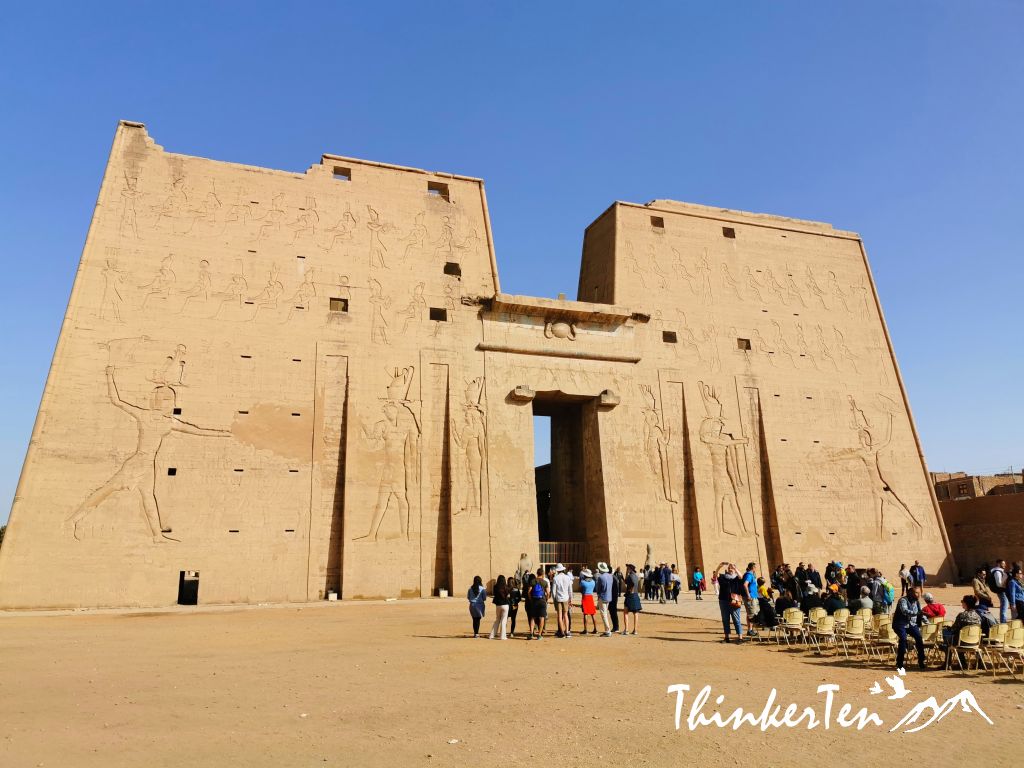 What kind of architecture is Edfu Temple?

When you proceed inside, you will notice the temple of Edfu consists of traditional elements of Egyptian Temples of the New Kingdom, together with a few Greek elements.

You will see many battle scenes

The high wall is decorated with many battle scenes. 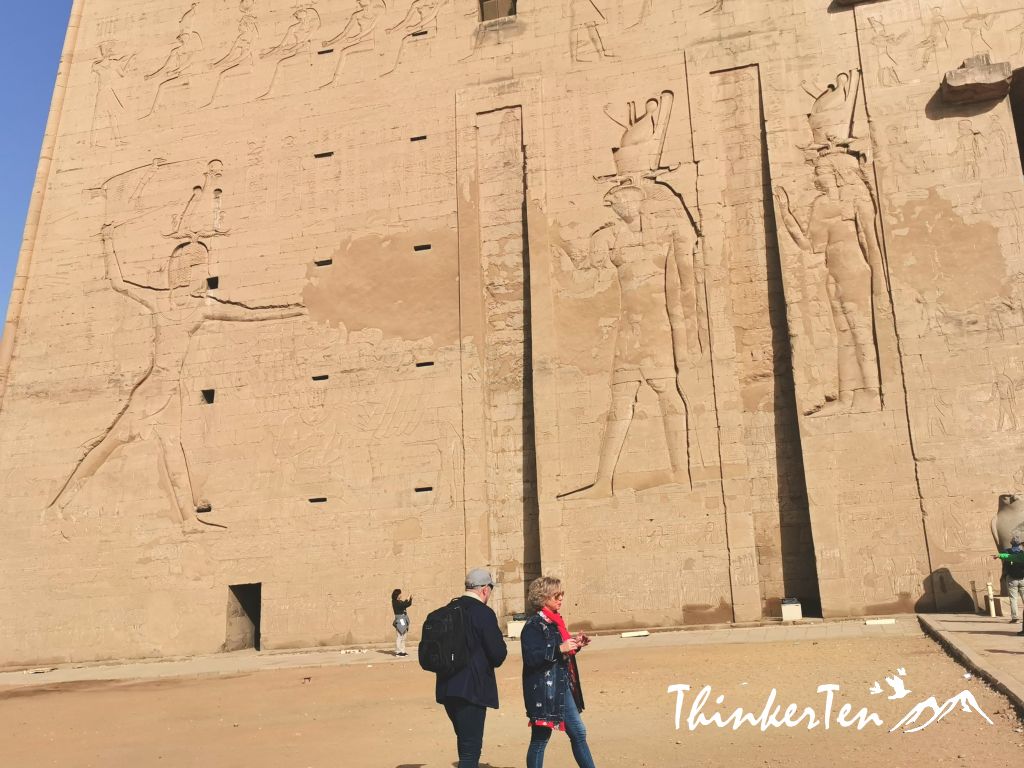 Guess what is the most important statue here?

Horus was a god of the sky, a god form of a falcon whose right eye was the sun or morning star, representing power and whose left eye was the moon or evening star, representing healing. Horus is probably most well-known as the protector of the ruler of Egypt. The Egyptians believed that the Pharoah was the ‘living Horus’. In one of the battles, Horus lost one of his eyes. The eye was restored to him and it became a symbol of protection for the ancient Egyptians.

One of the most important symbols associated with Horus is the “Eye of Horus”, a symbol meant to offer the protection of the gods.  You will find in many of the souvenirs store selling Eye of Horus, they make it into a pendant or earrings.

At the Colossal Courtyard

At the colossal courtyard, there are 32 towering columns and this is where the temple priest made offerings to Edfu’s gods surrounded by the town people. 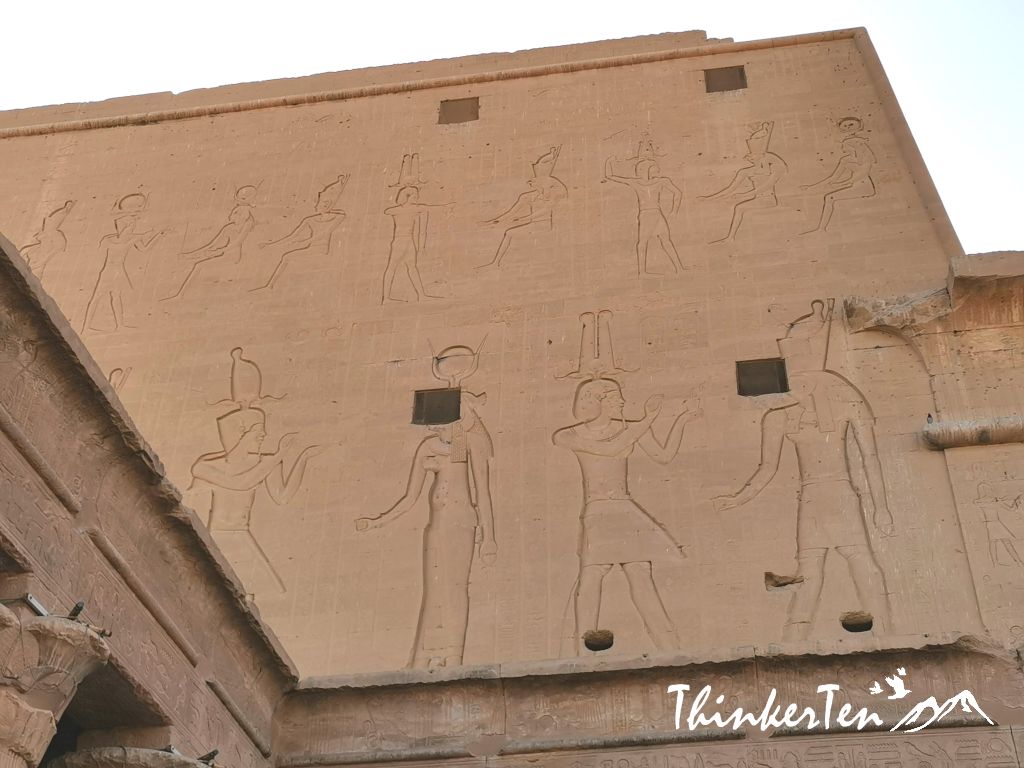 Check out the Columns

The columns are decorated with floral and palm capitals, and the golden-hued stone walls are carved in reliefs of the god Horus and Hathor. Hathor is the wife of Horus, the goddess of the sky, of women and of fertility and love. Her principal animal form was that of a cow and she was strongly associated with motherhood. Hathor has a cow’s head and ears, with a solar disc between a cow’s horns. 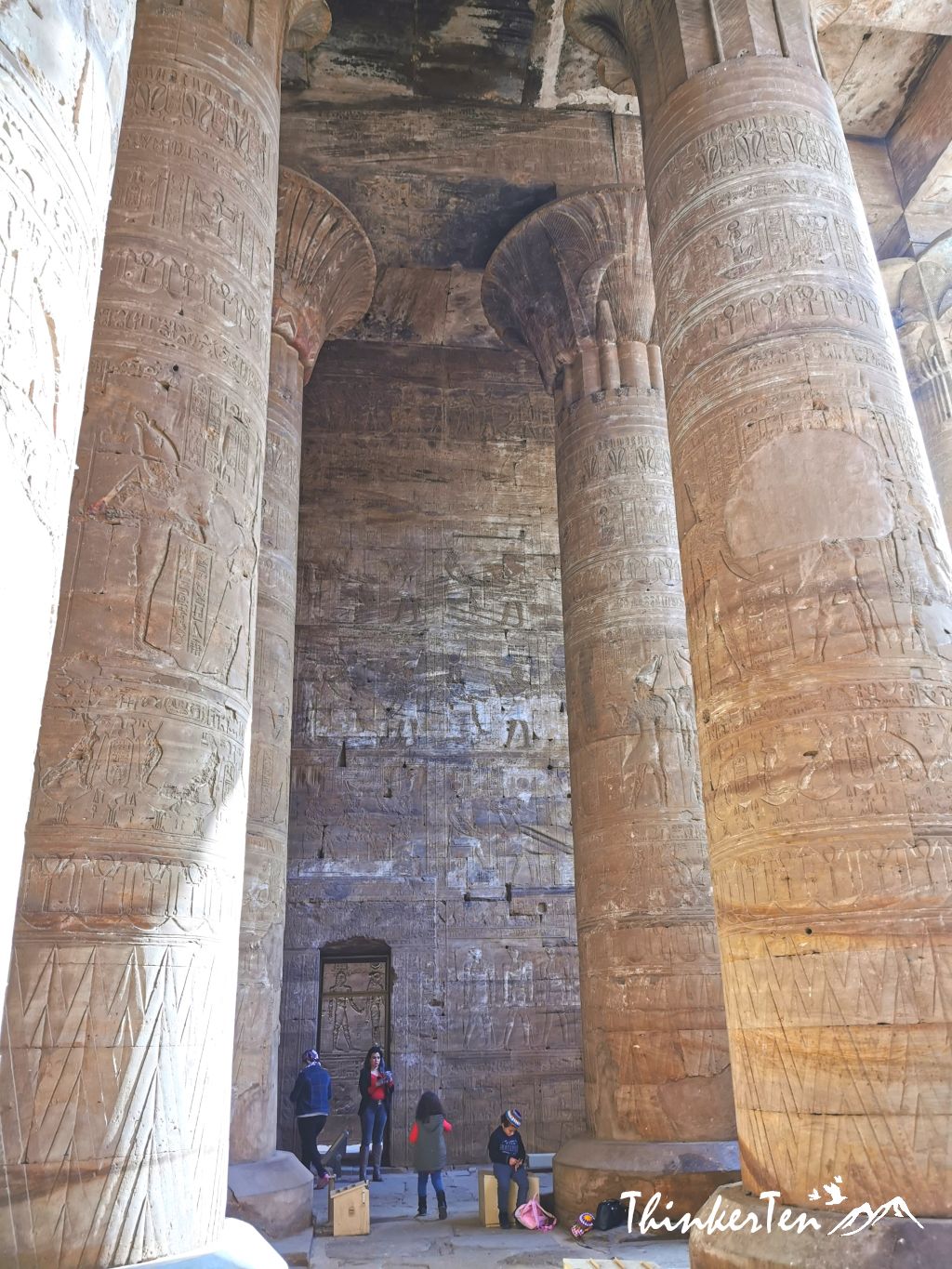 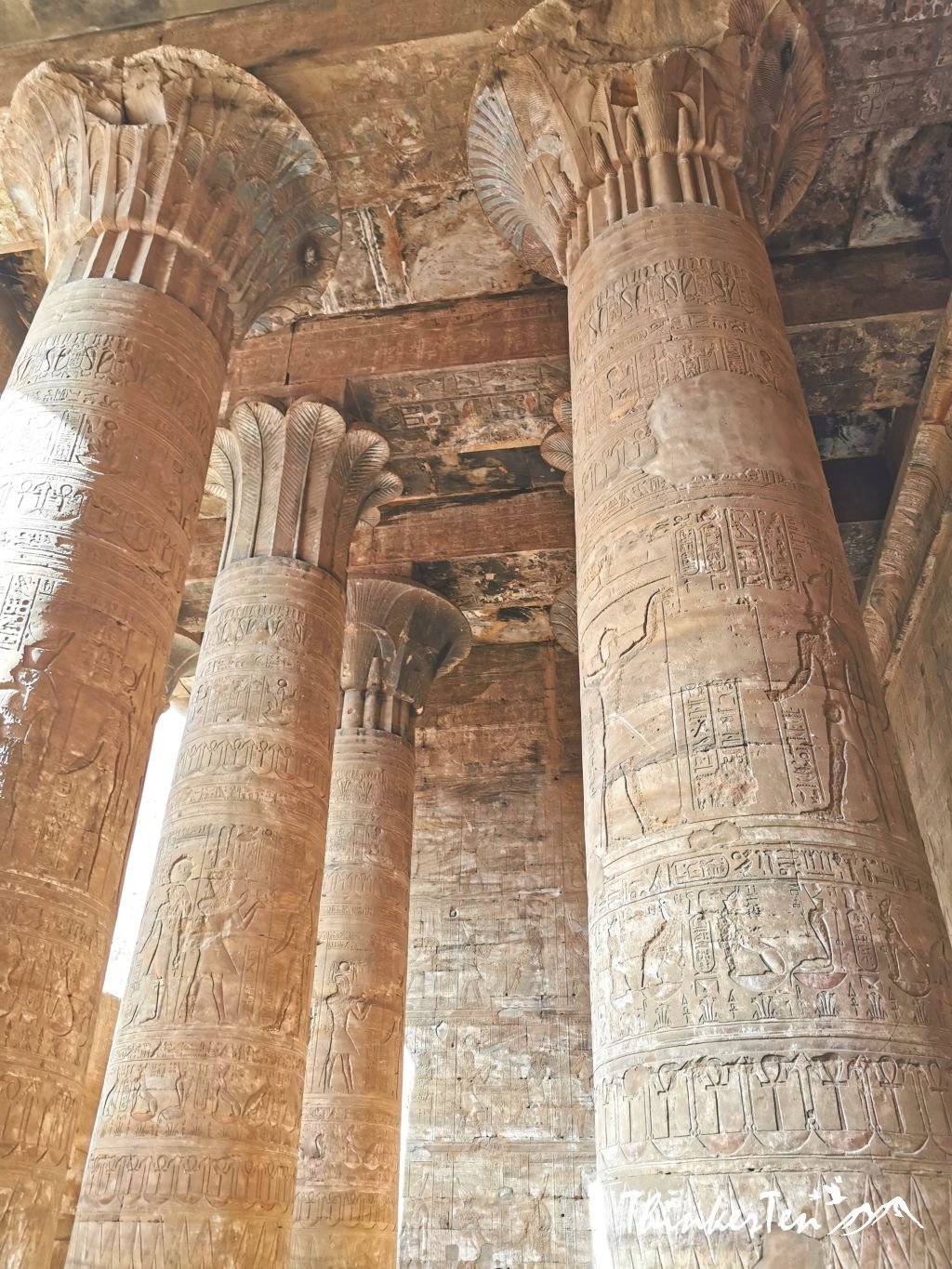 The inner temple is darker and again columns can be seen. Altogether 12 of them, topped with elaborate floral capitals. 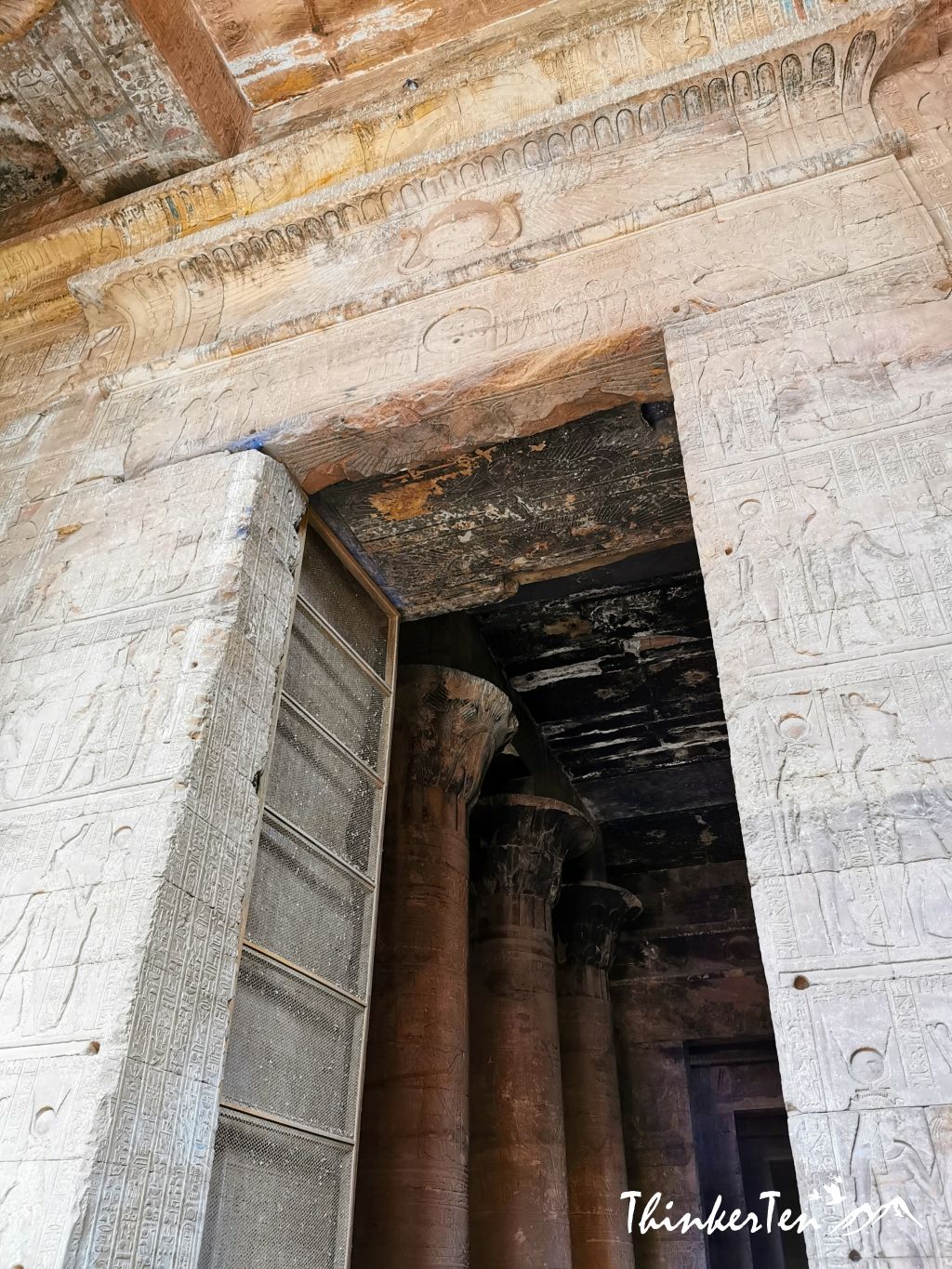 You may ask what happen to many of the faces on the wall?

The image of the face of the Pharoah on the wall was destroyed by the Coptic Christian. 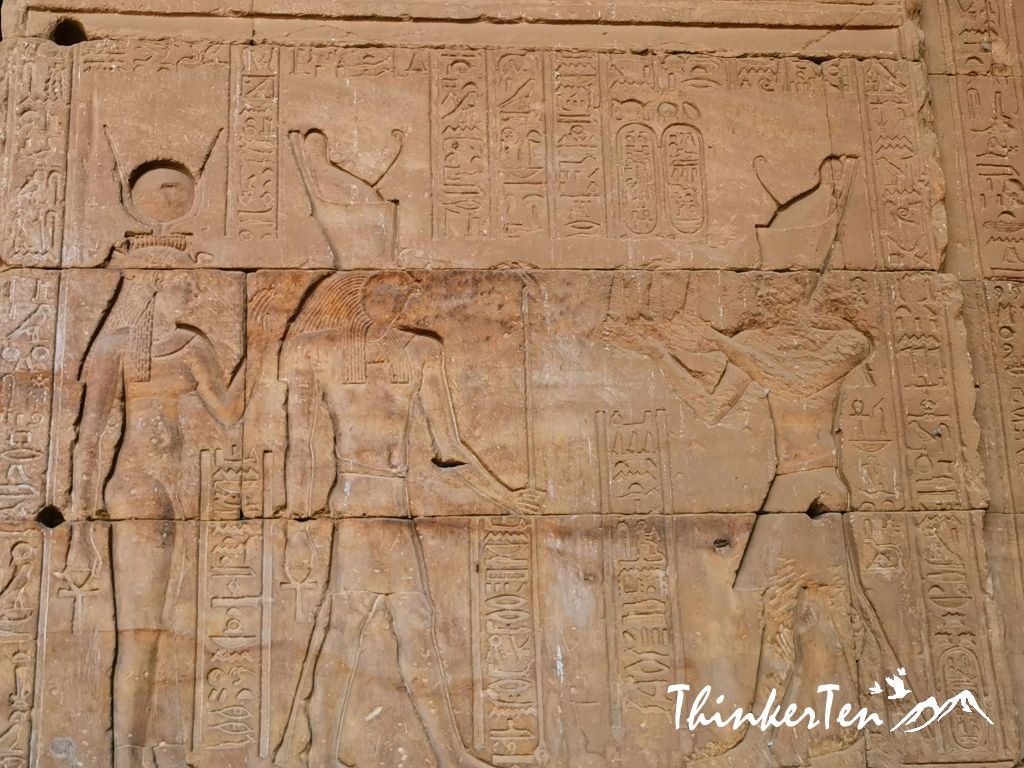 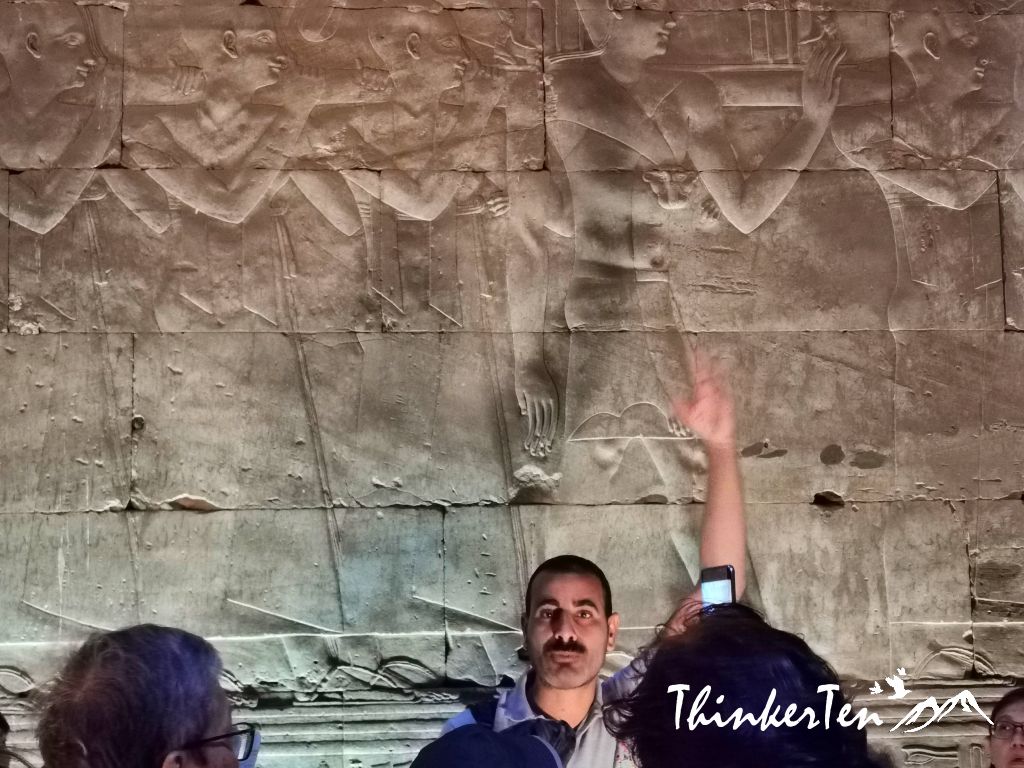 Our guide showed us something interesting, look at the below picture. Can you find some relation?  Our guide pointed to the wall and showed us the symbol of “wifi”.  He jokes that long time ago, ancient Egyptian already has “wifi” with them. 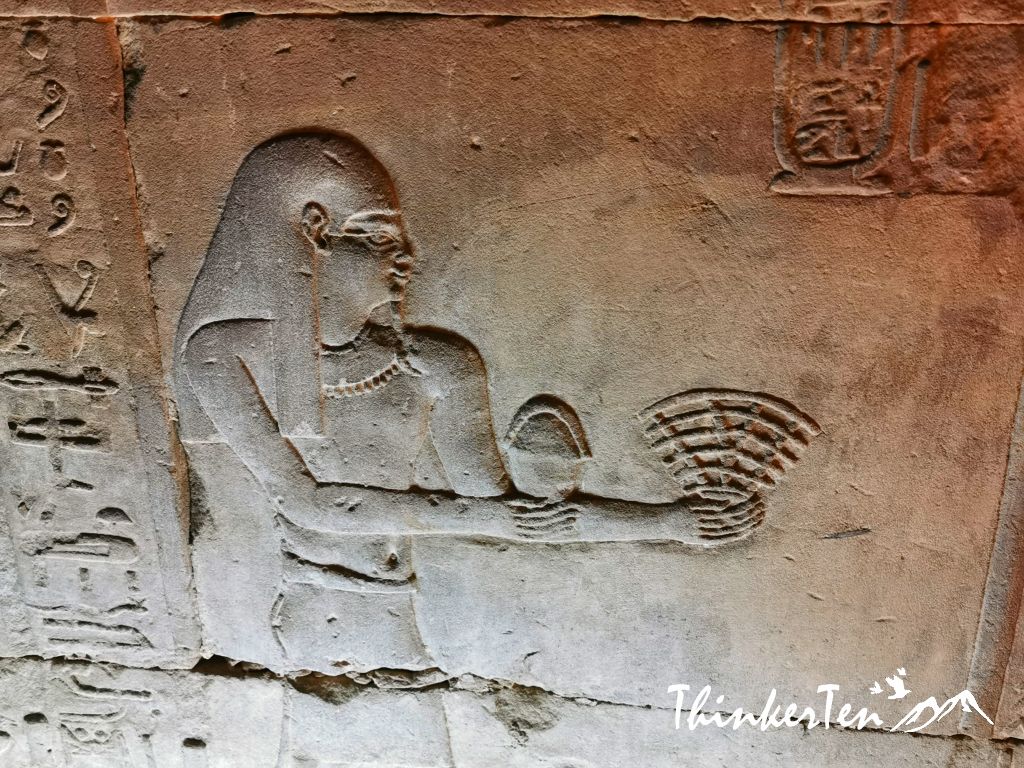 The mural reliefs upon the walls here depict the procession of priests, headed by the pharaoh.  Pharoah wears a crown and the priest has no hair with them. 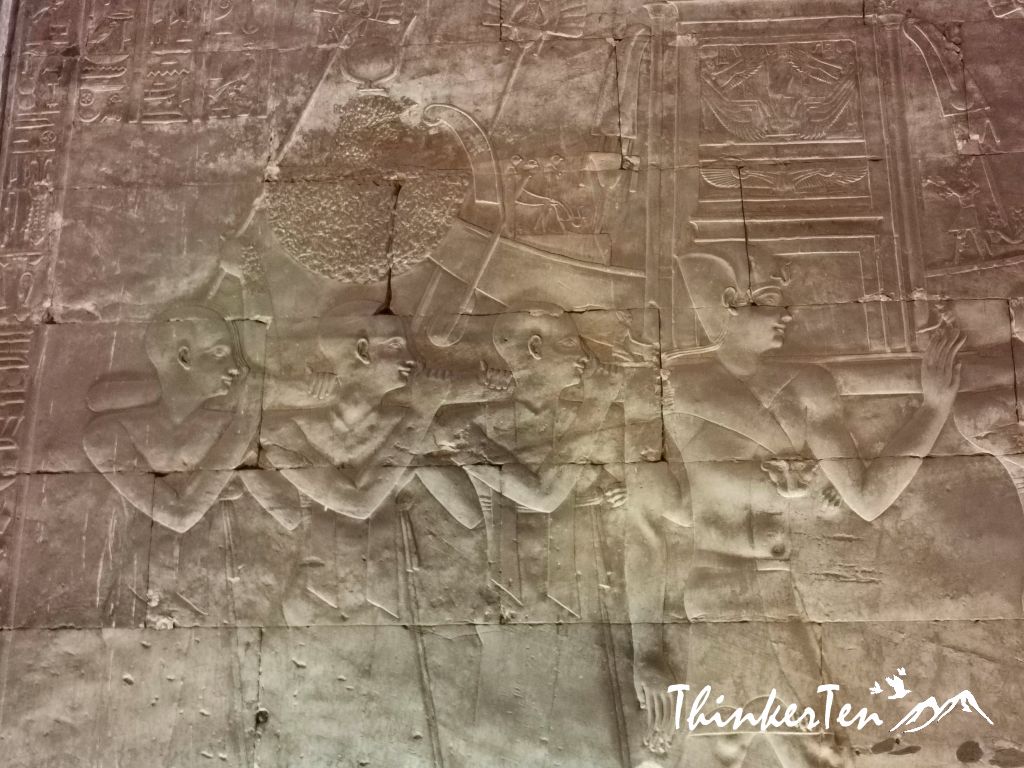 This is the hall of offering, where food and drinks were offered daily to the Egyptian God.

In this dark chamber, you will find a small wooden boat but it is only the replica, (the original can be seen at the Louvre in Paris), which would have held the golden statue of Hathor on festivals and during processions. 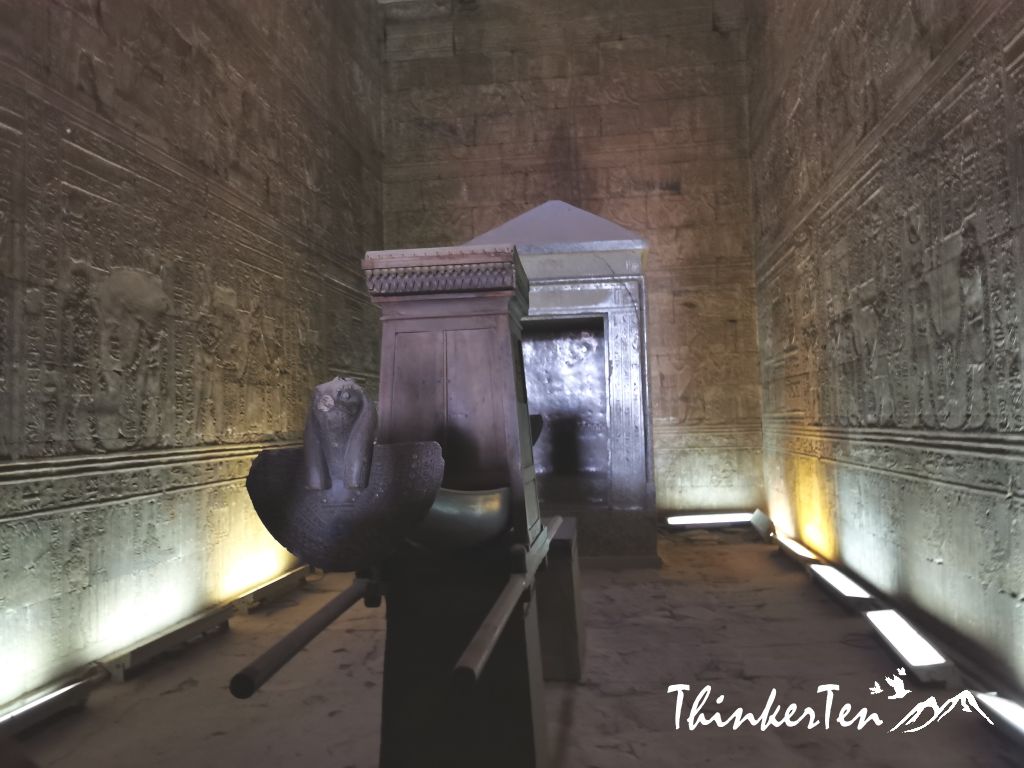 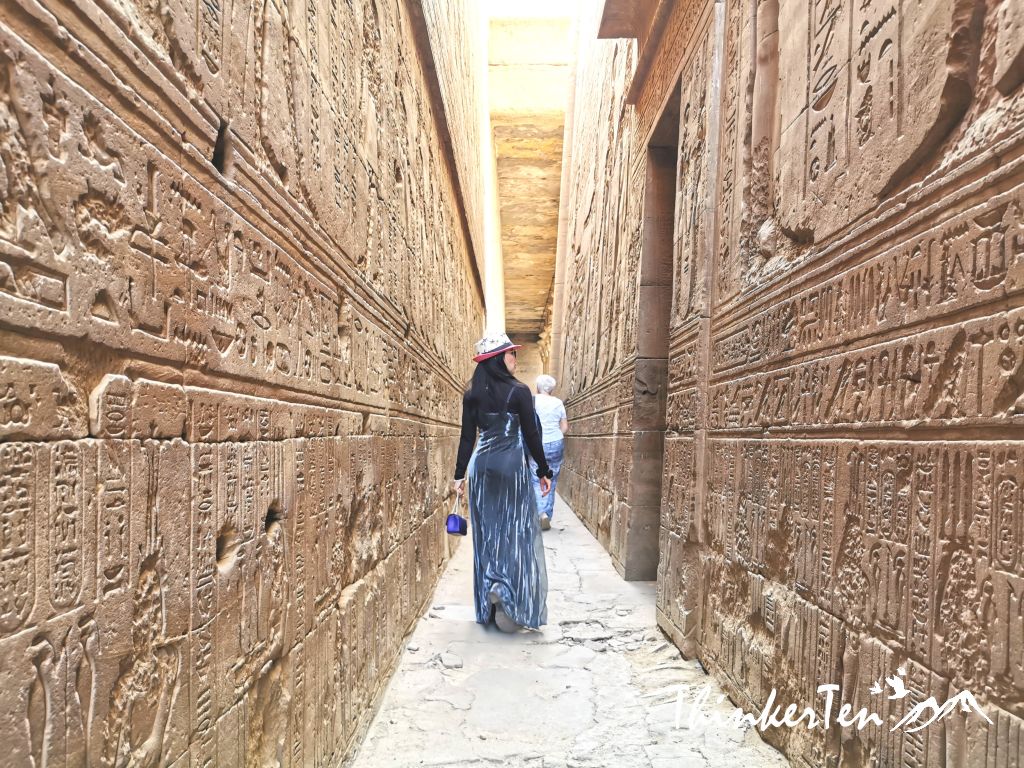 Can you spot the pair of Horus? The one on the right-hand side wears a double crown with cone-shaped.  The double crown represented the unification of the two regions of Egypt, Lower and Upper Egypt. 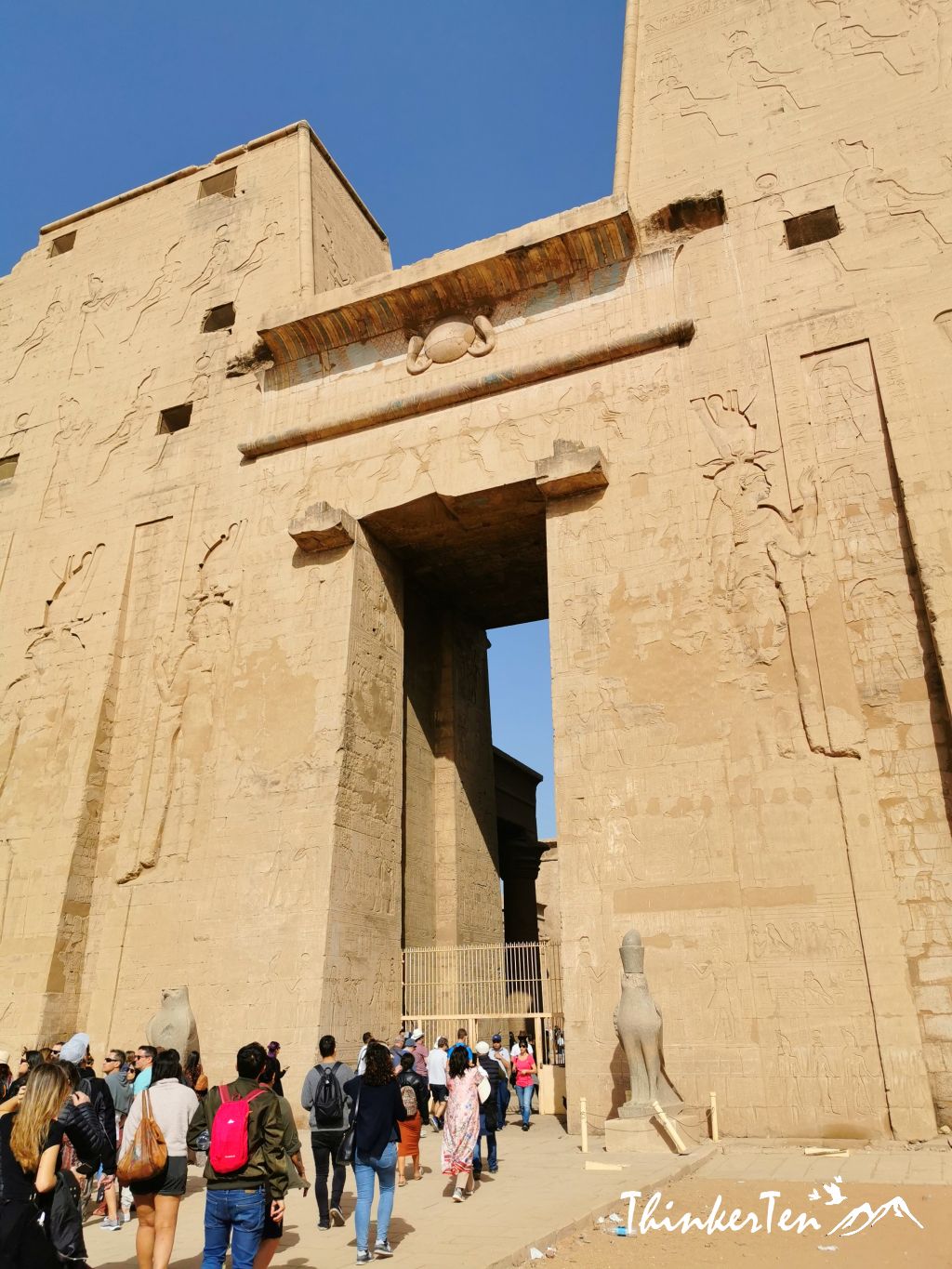 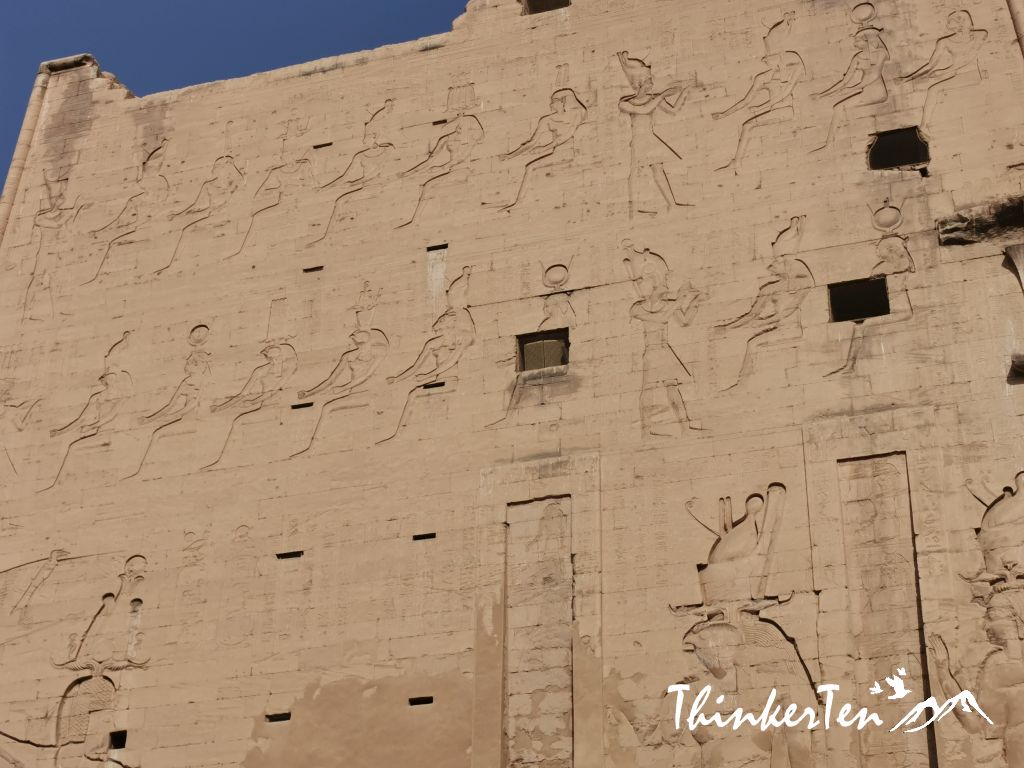 Edfu city is backward and dirty. Trash is found all over the city. The horse carriage drivers are aggressive and the same goes for the persistent salesmen when you enter the temple. If you are not interested in buying, don’t even try to look. They yell anything at USD one dollar but when you asked them how much, they will ask you to go into their shop. Please do not go in, just deal with them outside. I refused to enter their shop but asked them how much again the item that I was interested in. Once they knew I was interested, they changed the yelling price from USD 1.00 to USD 10.00. Later they explain to me that, “See is one dollar, buying is different price.”

I bought a white scarf from another vendor who told me, it was one dollar at first. Price changed when I handed him the money, he took my money and asked me to give him more. So I gave me another one dollar but still, he told me to give him one more.  I walked away as my tour group is waiting. He then followed me all the way but at one point, he was stopped by the security guards. Later I was told that salesmen are not allowed to go too far from their shop. In the end, I have given him USD3.00, it was not a big sum of money at all and I don’t mind paying this amount of money. I just wasn’t too happy that the salesman did not give me an honest price at the beginning.

This is an agricultural town but many people seem to live off tourism. 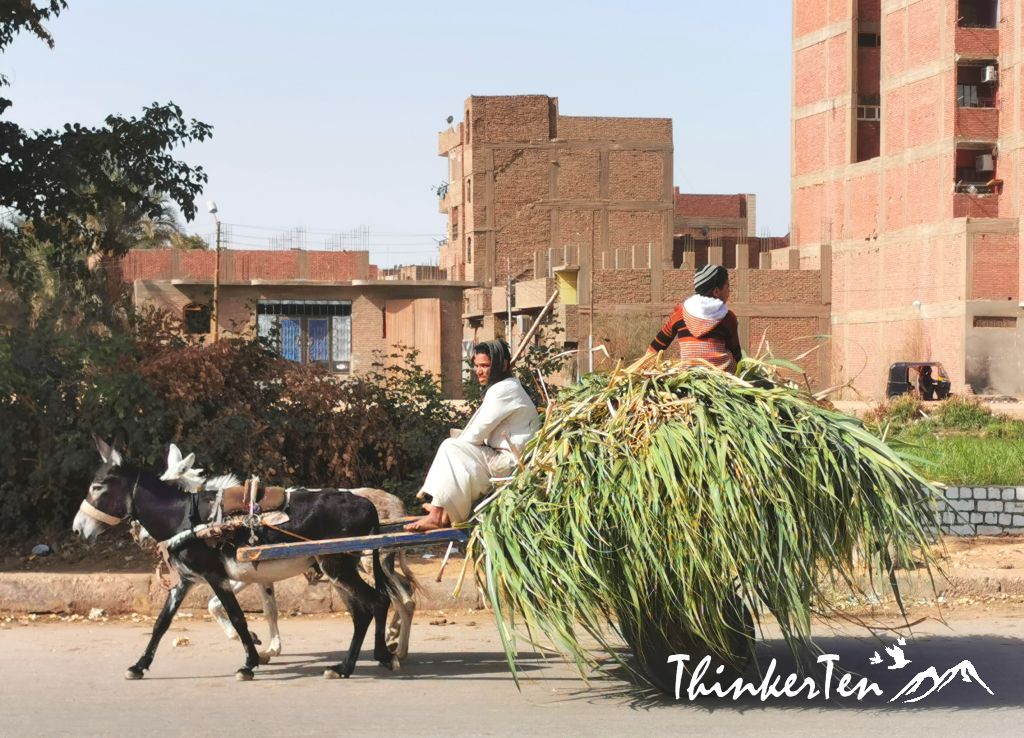 It is all about tipping

Temple of Horus in Edfu is stunning, it is a very well-preserved site in Egypt.  It is still very complete as compared to many other temples in Egypt because it was covered by sands in the desert and only discovered later.  The horse carriage is quite an experience from the cruise to the temple.  The traffic can be a little daunting but this is Edfu Egypt.  You will pass by the main street and alley and got to see how daily life is like here. 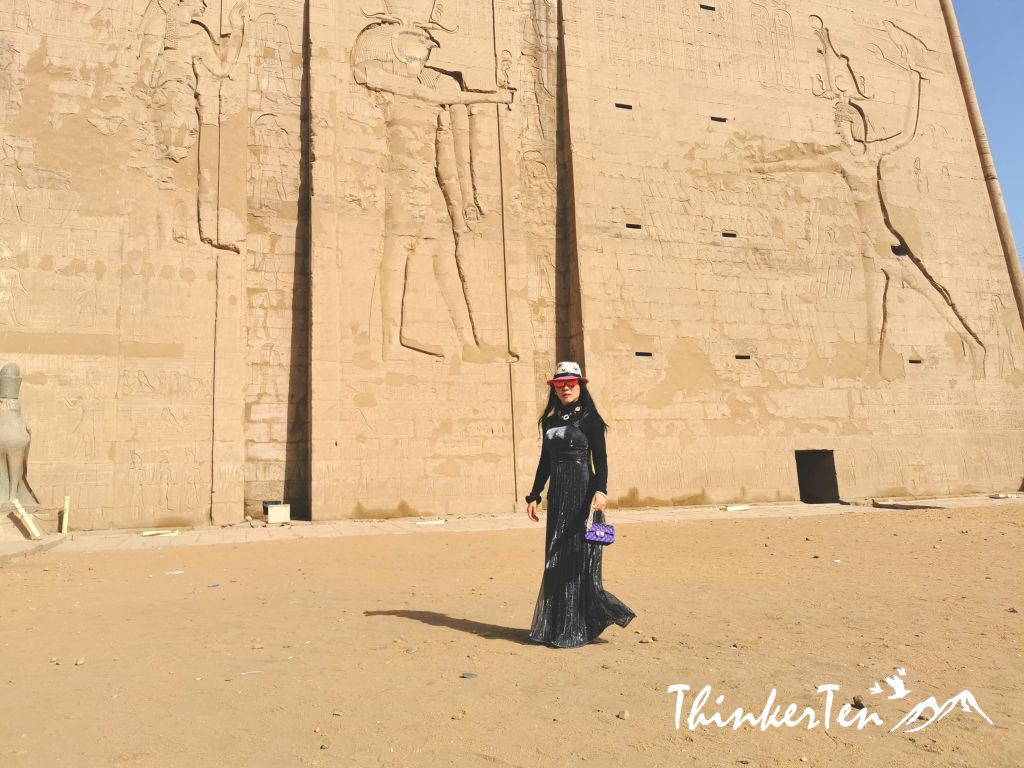 That was a very in depth review. I would love to visit Egypt just to see these sites. I just dread having to deal with aggressive street vendors. Did they ever say what that “wifi” symbol represented?

Wow!! What an incredible looking structure! Must have been such a sight to see. Thanks for sharing your photos and experience!

You are so lucky to visit fantastic and historic places such as the Edfu Temple. I love everything about it from the drawings on the wall to the design of the temple it self. So many people there as well.

The Edfu Temple is stunning and what a rich vacation this will make. I would love to get here and appreciate the gorgeous photos that make me feel like I have been 🙂 One day ~ Fingers crossed!

The High Wall graphics are simply stunning; I also really would enjoy the courtyard. What a magnificent place to see.

I love Egypt and this is a great review. Such a great destinationa with so much history and culture.

I have only ever been anywhere by horse carriage once and it was a great experience. How beautiful.

I’ve never heard of the city of Edfu. The design and architecture are gorgeous! I would love to see it in person one day.

It looks like a great historical place to visit. Thanks for sharing the history behind the status and the monuments there.

what an adventure! I help an elderly woman and she has been to Egypt many times and says it’s one of her top places she loves. Her stories are amazing to listen to… and now I can get the visual through your photos. What wonderful history!

What a fantastic and historic place you’ve visited. I’m goiing to added on my where to go list.