There are hundreds of cruise ships sailing on the stretch of the Nile River between Awan and Luxor in Egypt. They usually make two stops, that is Edfu and Kom Ombo city. For Kom Ombu Temple, it is only within the walking distance of few minutes while for Edfu Temple, you need a horse carriage to bring you from the river.

Before we leave our cruise, we were given a boarding card, so that everyone is accounted for before they recommence the sailing. 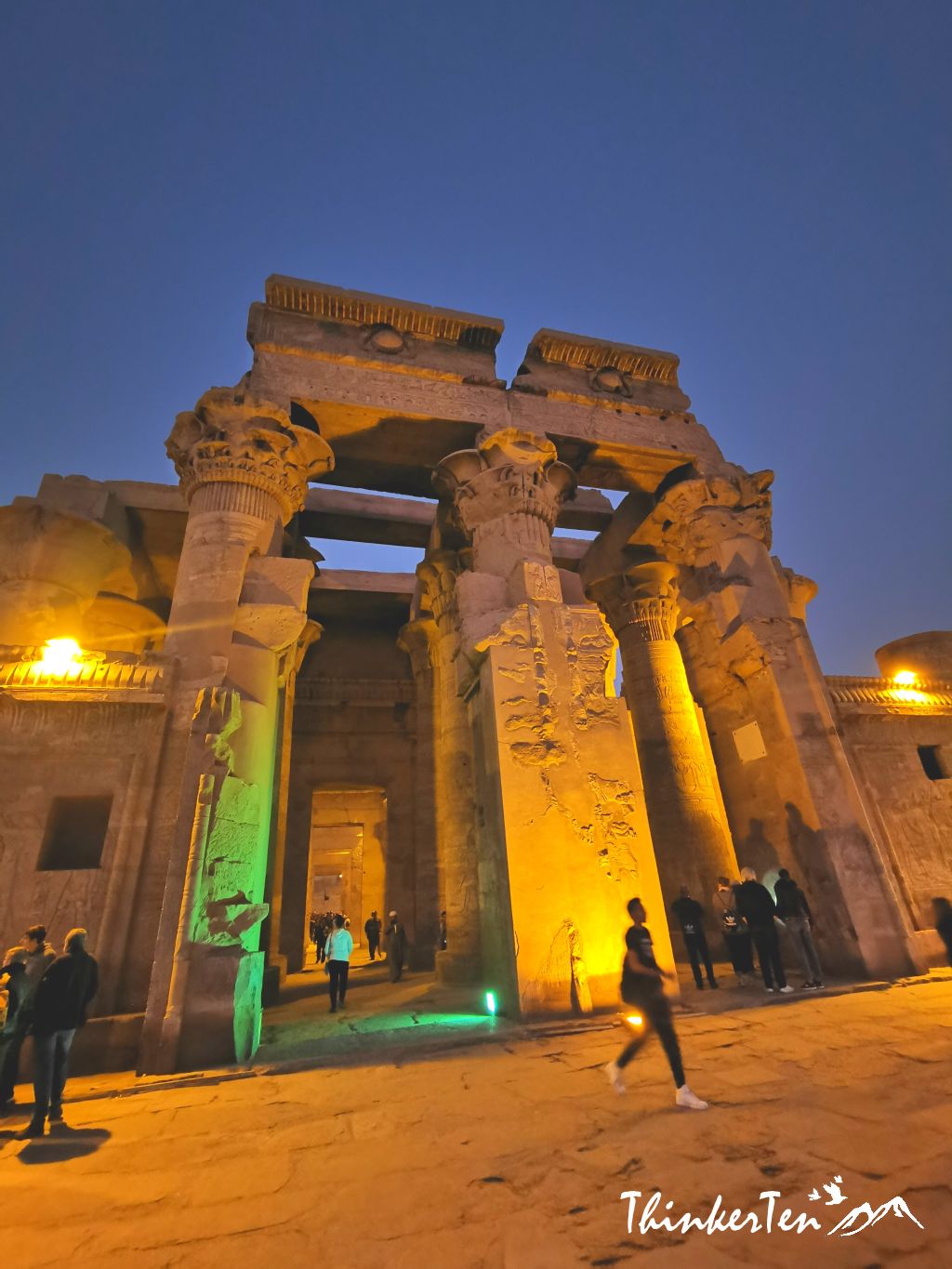 Kom Ombo was constructed in the Greco-Roman Period, from 205 till 180 BC in the ruling period of King Ptolemy V with some additions later on during the Roman period. 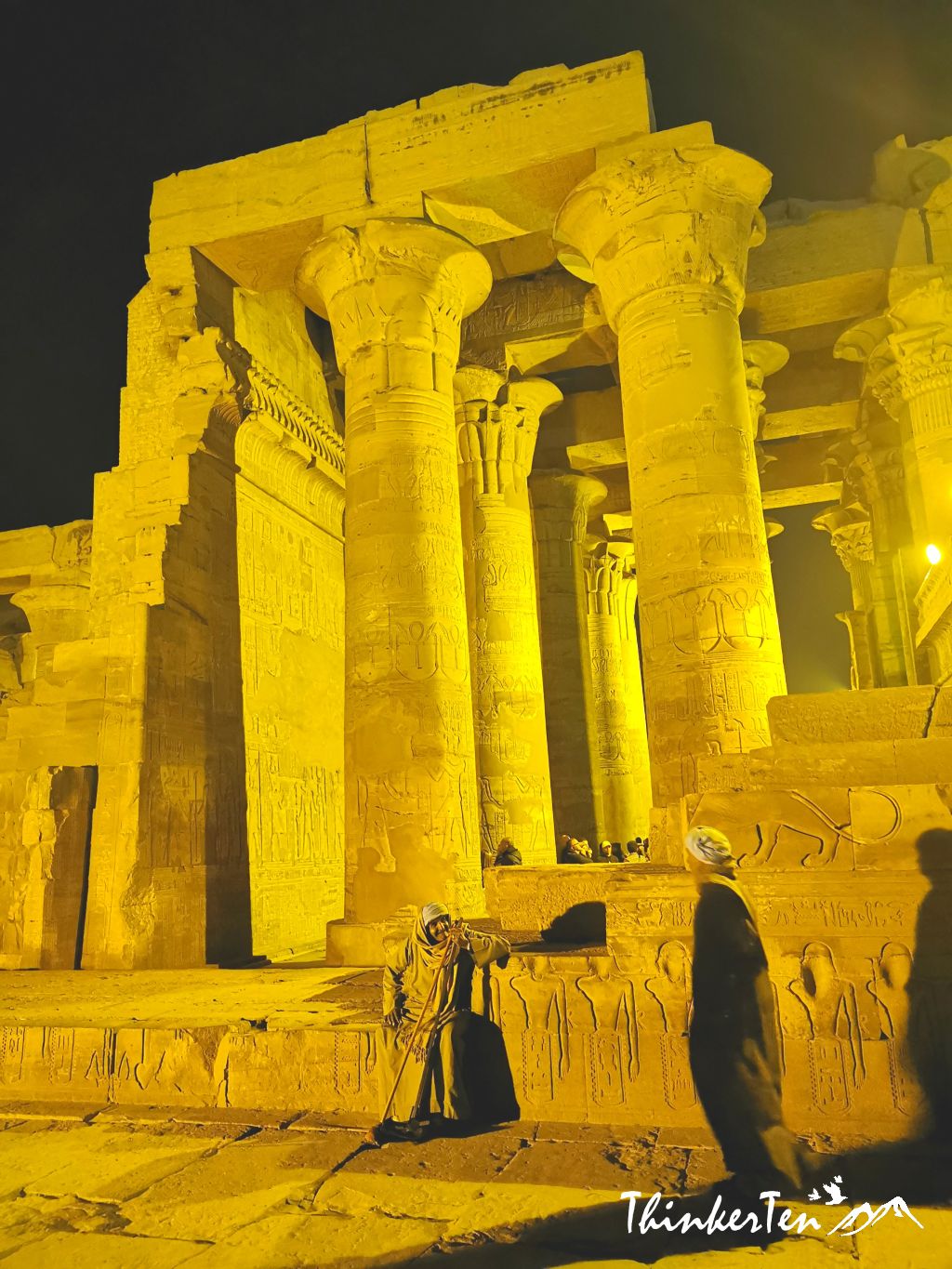 The temple of Kom Ombo is unique because it is a double temple, dedicated to Sobek, the crocodile god, and Horus the falcon-headed god. So you will find two entrances, two courtyards, two colonnades, two Hypostyle halls, and two sanctuaries, one side for each god. 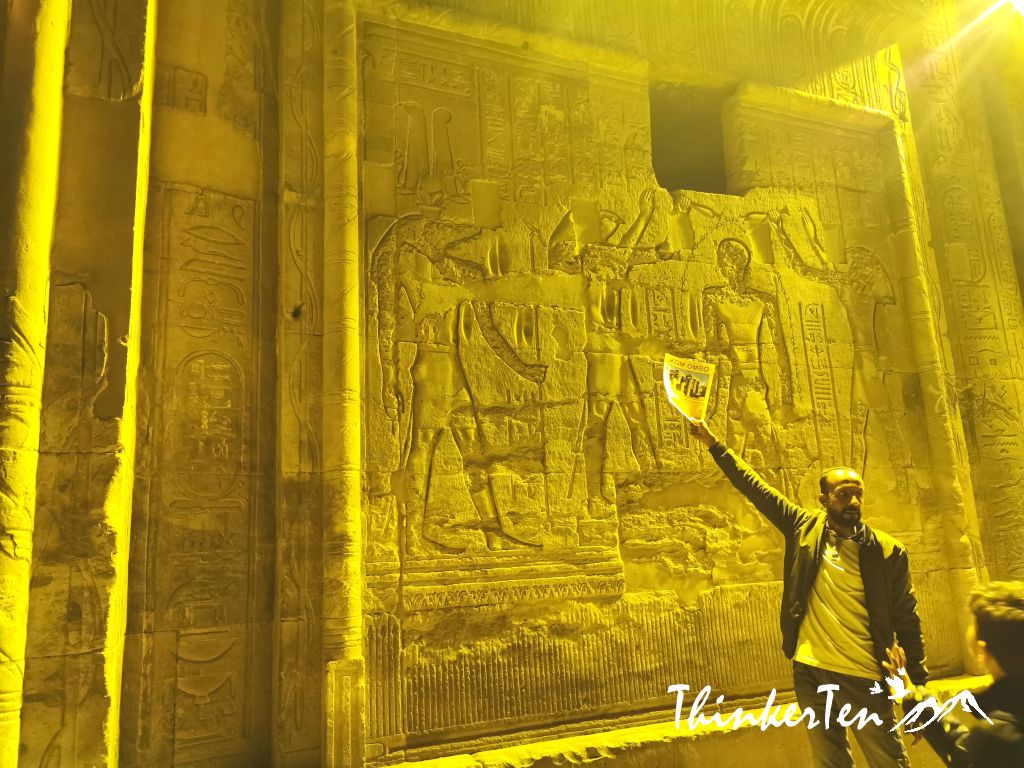 Sobek is a famous Egyptian god (see above picture) with a crocodile head and human body. He was a god of the Nile who brought fertility to the land.  He was also associated with Seth because they both caused danger and chaos.  (Seth God was the Egyptian god of war, with a canine body, slanting eyes, square-tipped ears which look like a jackal or a fox.)

While Horus is the god of falcon who has a falcon head and a human body. He is the protector of the ruler of Egypt. The Temple of Edfu was dedicated to Horus. 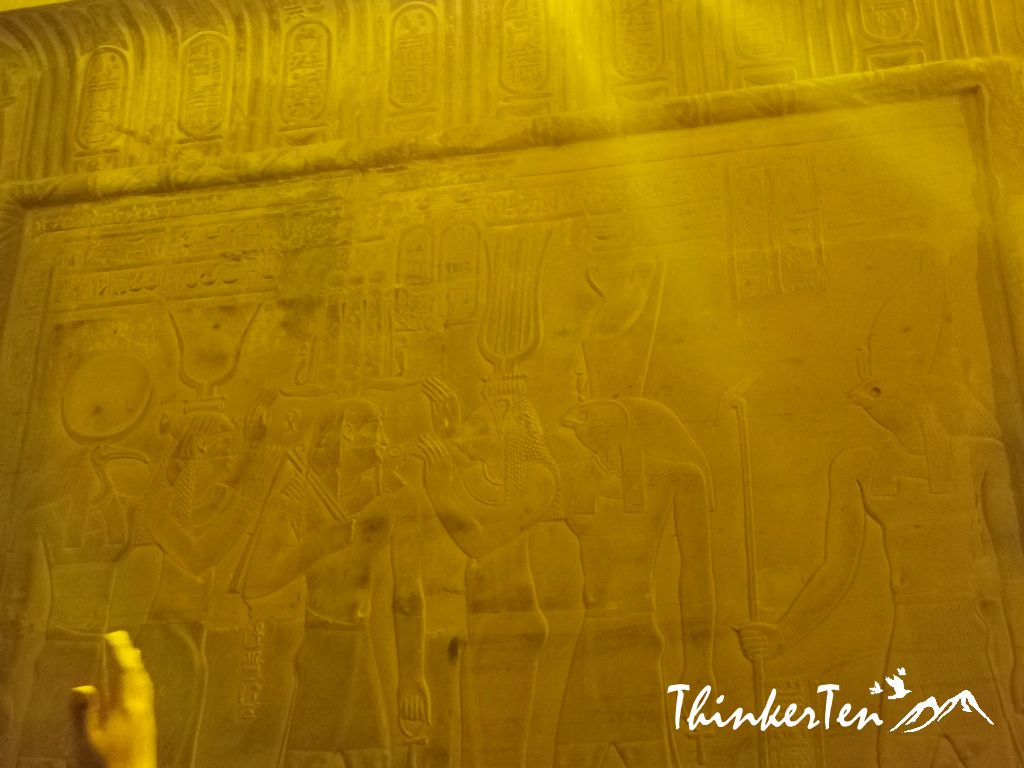 Kom Ombo Temple was not as complete as Edfu Temple, it has been affected by earthquakes and by the flooding fo the river Nile. You also notice some of the faces on engraving walls were erased or destroyed by the Coptic Christian as it was once used as a church. 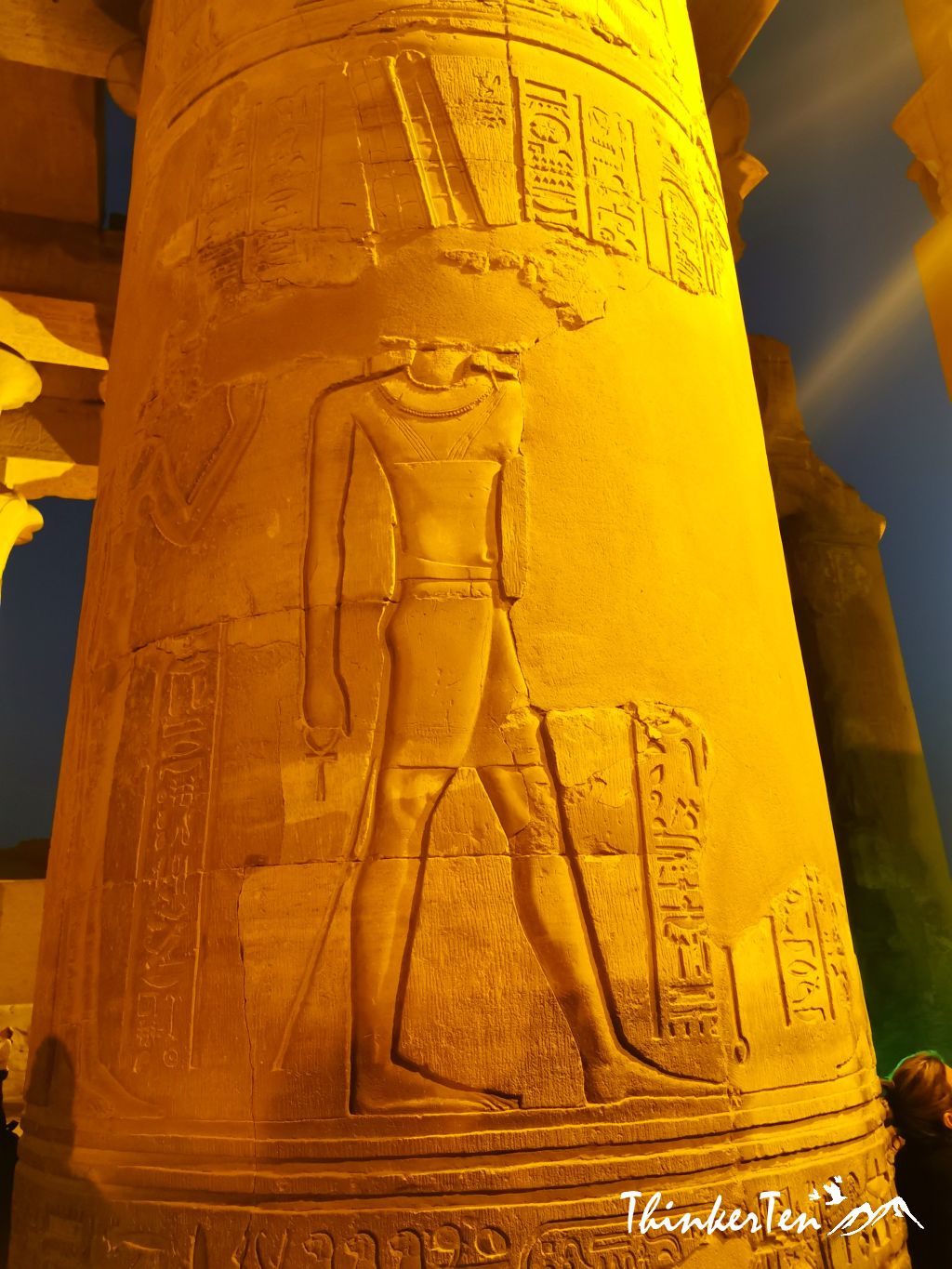 One of the architectural elements for ancient Egyptian temples is the giant columns.  Please pay attention to the column in Temple of Kom Ombo which represents papyrus flower at the top ceiling.

Most of the Egyptian temples that I have visited so far were during the day and this time at Kom Ombo it was a night visit. I was a little disappointed at first as pictures at nights are hard to capture. However, the night visit gave me a good surprise, it has a completely different perspective because of the lighting effects. 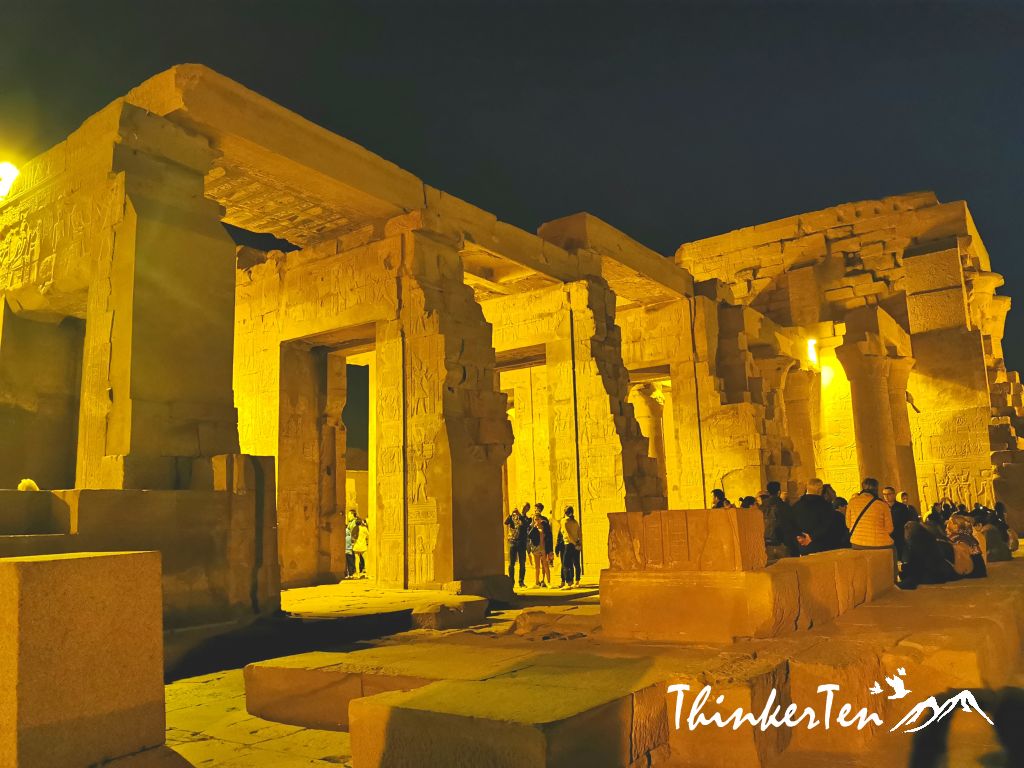 The deep cylindrical well is called nilometer for measuring flood.

Every summer, the river Nile floods and the water overflows its banks. Since ancient times, the Egyptians have depended on the Nile’s flood for their harvest. The nilometer here was a structure used by the ancient Egyptians to calculate the water level of the Nile River during its annual flood so it better predicts the future harvest. 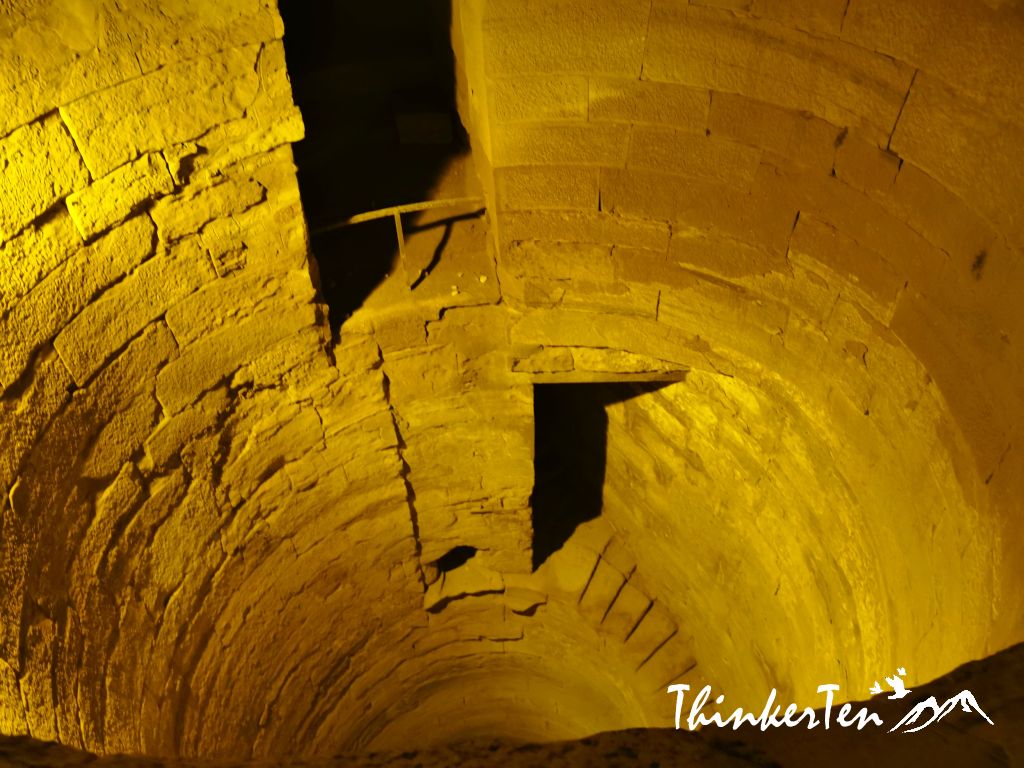 You should also look for ancient surgical tools on the carved wall, you will find instruments such as forceps, speculators, scissors, medicine bottles and many more. Go find the image where two goddesses sitting on the birthing chair, giving birth and breastfeeding the baby. Based on the images on the wall, you will know how advanced the ancient Egyptians are. It could be the most advanced country during that time. 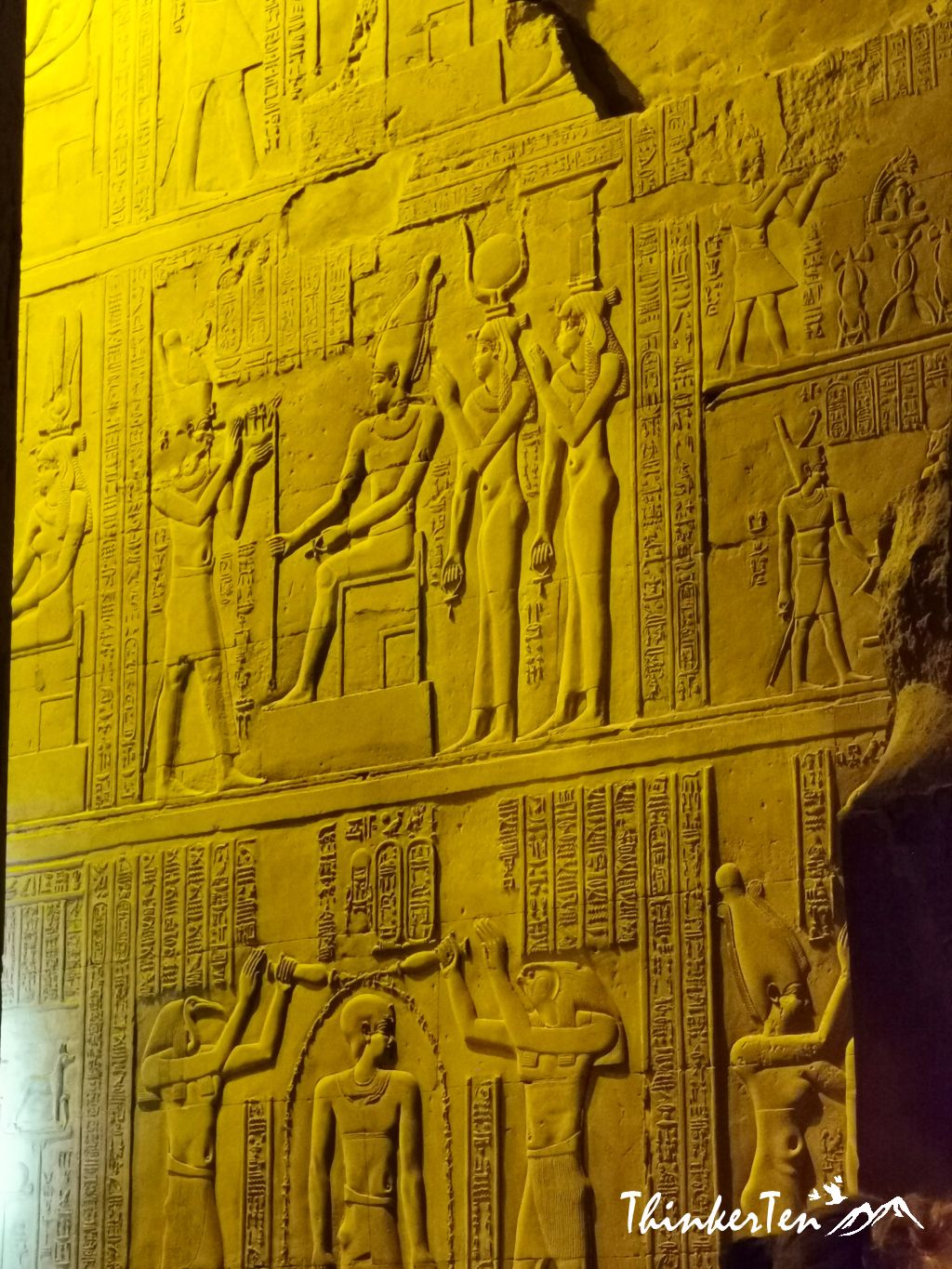 The human penis and the droplets will get your attention. It is possible that the Egyptians knew about men’s urinary problems. The upper penis presents with a normal urinary flow indicated by seven drops as opposed to the bottom penis with a reduced flow of five drops. 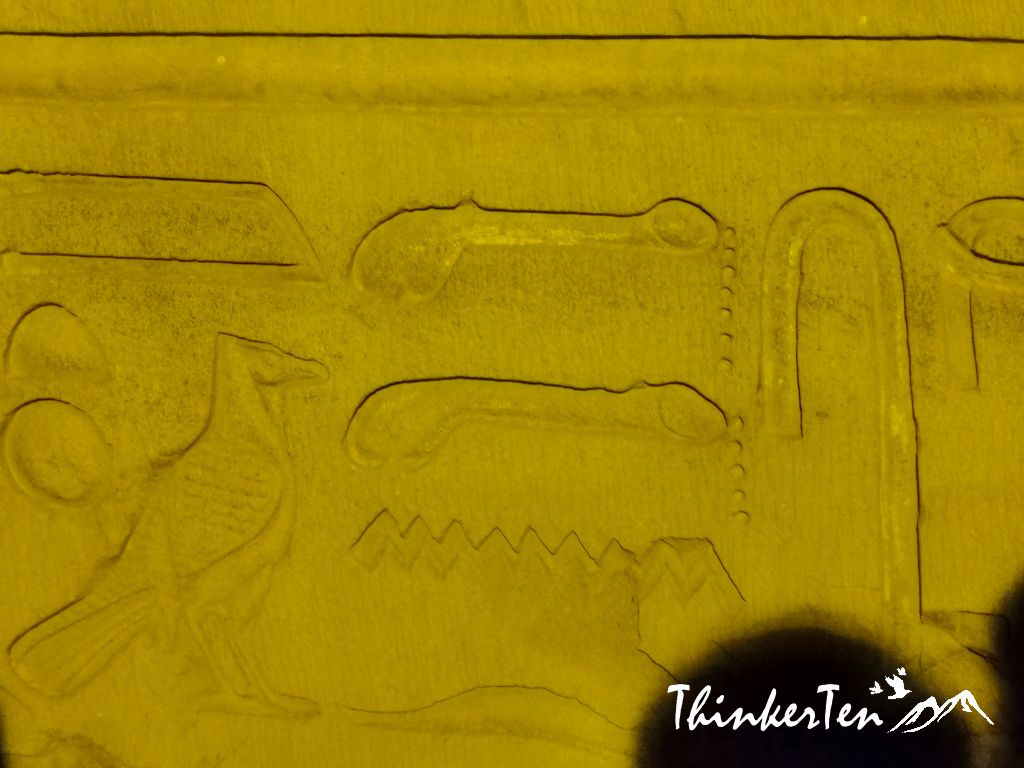 The ticket also includes an entry for the Crocodile Museum, you will see some crocodile mummies here. The museum is located right outside of the temple. It is not a big museum at all. 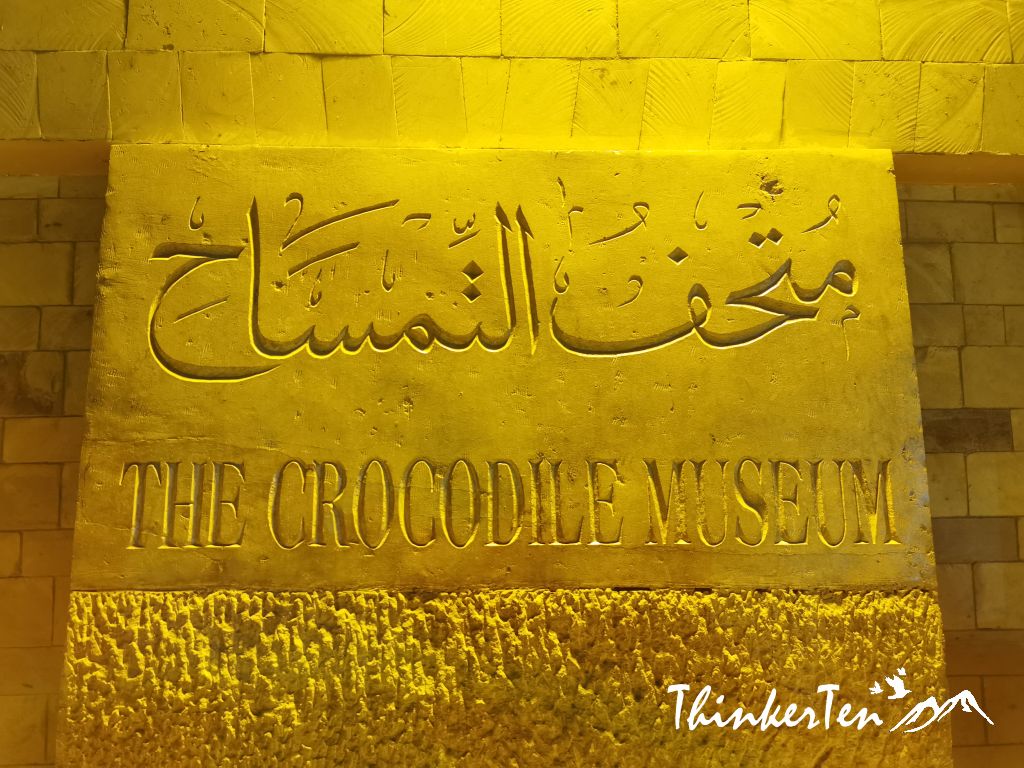 The crocodiles’ mummies are huge and lining neatly at the glass window.  The window was sealed but I could still smell some unusual smell inside the museum so I stop breathing for a while.  Luckily the museum is not very big so I could hold my breath and quickly walk outside the museum. 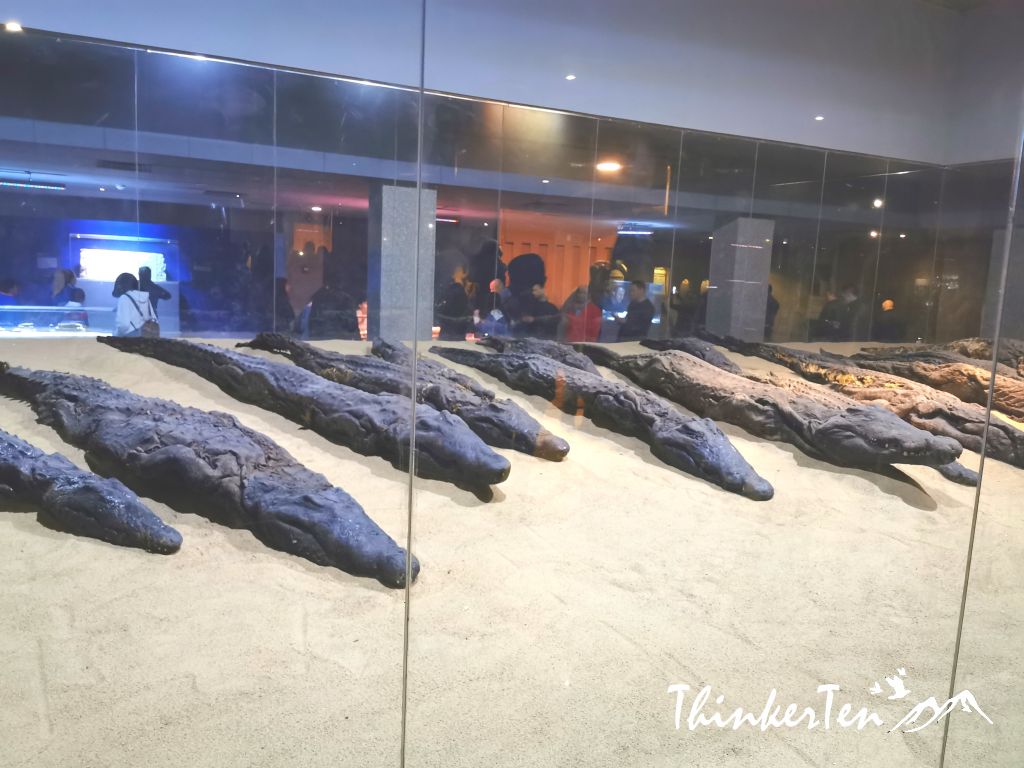 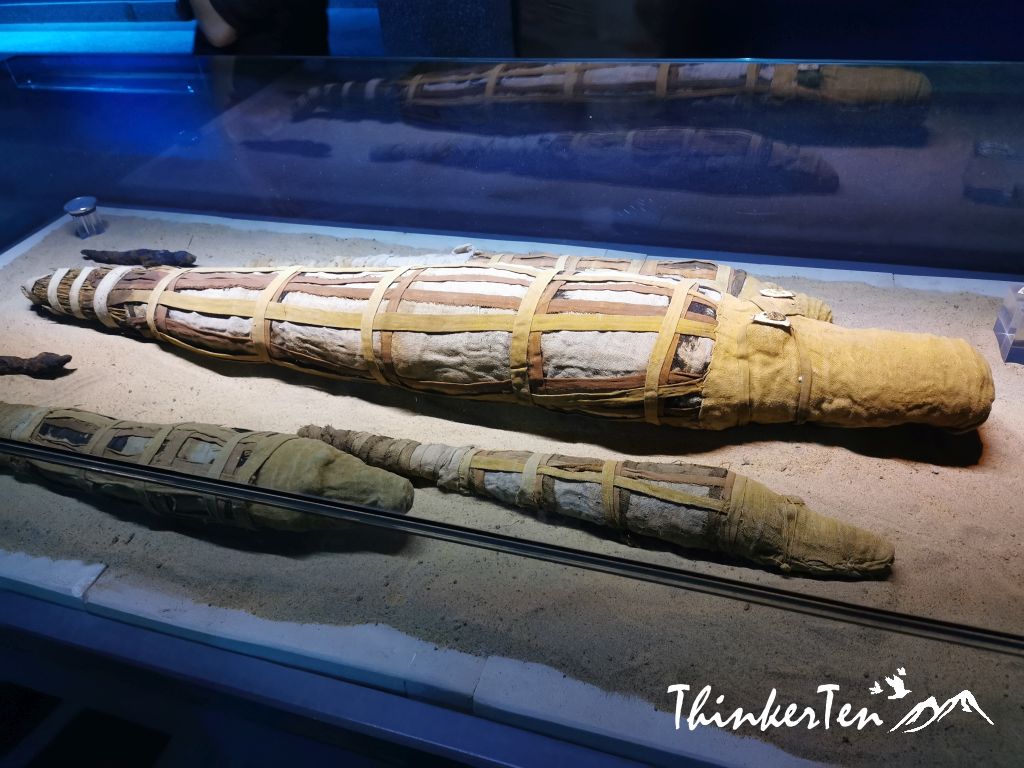 A collection of crocodile coffins, wooden sarcophagi, crock eggs, and fetuses are also on display. 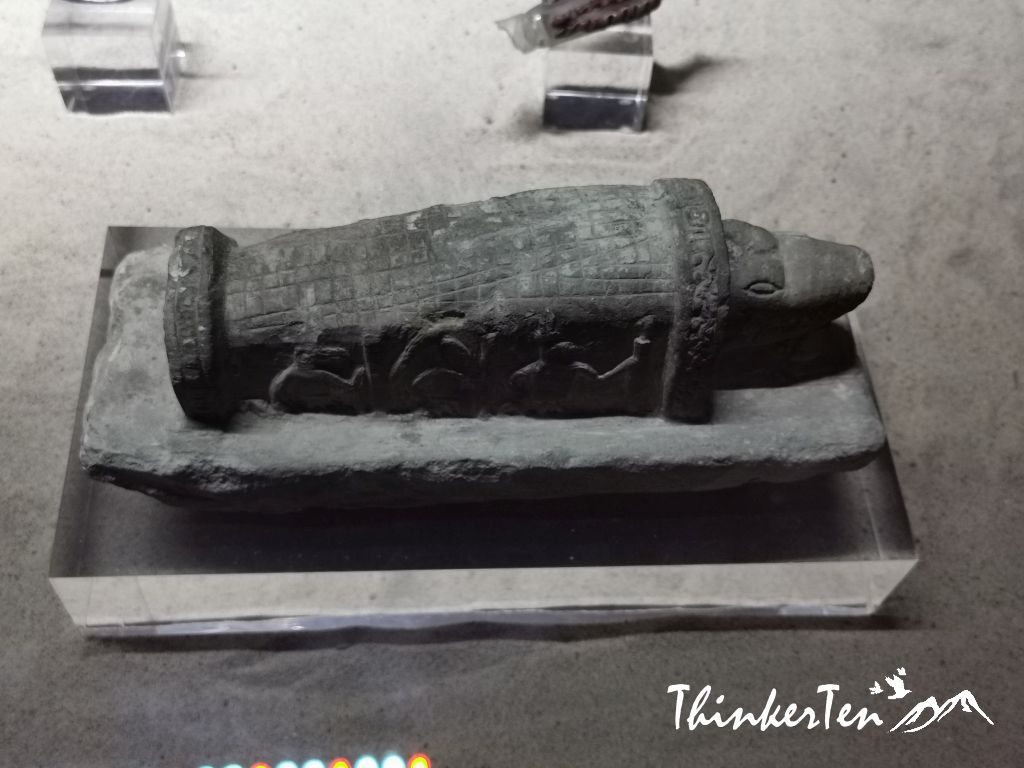 Ancient Egyptians would keep crocodiles in pools and temples. They ornamented the crocodiles with jewels in honor of their beloved god, Sobek. The people of ancient Egypt worshiped Sobek in order to appease him, the crocodiles, and to ensure the fertility of their people and their crops.

Crocodiles were usually worshipped in cities that depend on water where crocodiles were common. Kom Ombo is one of the places, as it just sits next to the Nile River. 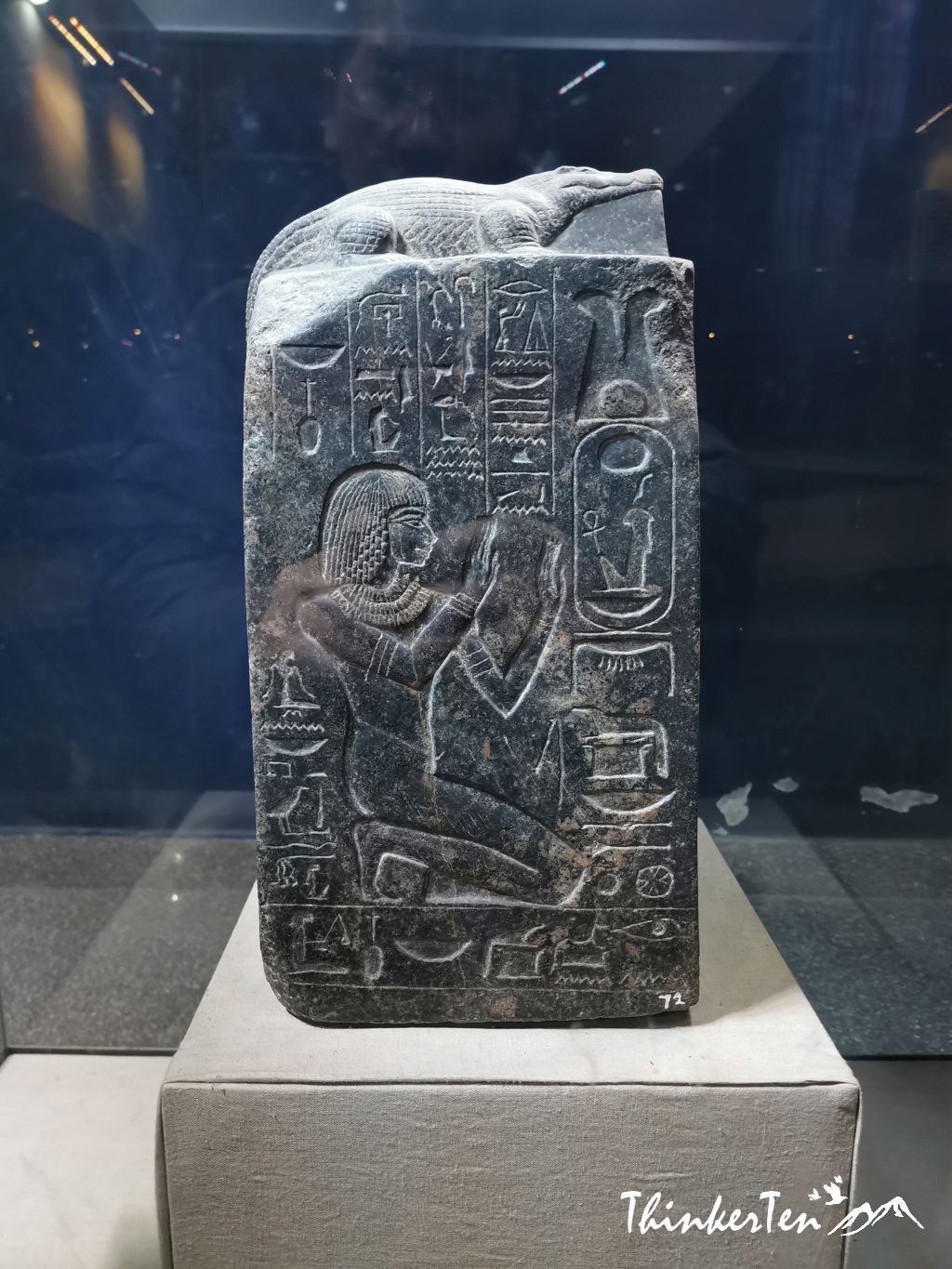 The night visit of Kom Ombo Temple turned out to be rewarding because of the beautiful lit-up.  At first, I was worried that my pictures won’t be well-captured because of the insufficient lights at night.

Since it is night time and dark, you have to be very careful when you walk on the uneven path. The temperature cools down so much as compared to day time since it is desert temperature.  Always have your thick jacket when you are out of your cruise ship.  The walk is only a few minutes from the cruise.

How to visit Edfu Temple

There are places that acquire a greater charm at night and this is one of them. I love the mysteries of Ancient Egypt!

Oh my goodness I am loving this trip and love the night visit with all of the wonderful lights! The Koa Ombo Temple seems like a fabulous place to visit and I for sure want to get to the Edfu Tempe so I will have to check out this one too 🙂

Im fascinated by the architectural aspect of the temples. Egypt is one of the places I would love to visit and this is an extensive insight. Thanks

A double temple! This is so interesting, I would love to check it out, gorgeous…

Wow this is absolutely incredible! I’ve always wanted to visit Egypt and posts like this are so helpful. There is so much to discover in this country. I can’t wait to visit.

I love the history in places like this! I would love to visit in person one day.

Egypt’s architecture and culture are fascinating. And the temples are just incredible.O am so happy I got to visit when I did.

What a gorgeous temple! I’ve never heard of Koh Ombo before, so this one is going straight on my bucket list! The photos are stunning at night too.

This is so fascinating to me. I’ve never seen anything this old in person.

Omg such great pictures. The scenery is even gorgeous at night.

Wow! Can’t believe how beautiful it looks in the night sky. I long to go to Egypt.