China Xi’an 2 : Find out what is the real meaning of “扬眉吐气” in Shaanxi.

Yaodong/窯洞 is a house cave, found in Shaanxi area. There are still quite a big population, 40 million living in yaodong these days.  It is very cooling in the summer when I had my lunch there and I heard it need very little heating in winter. 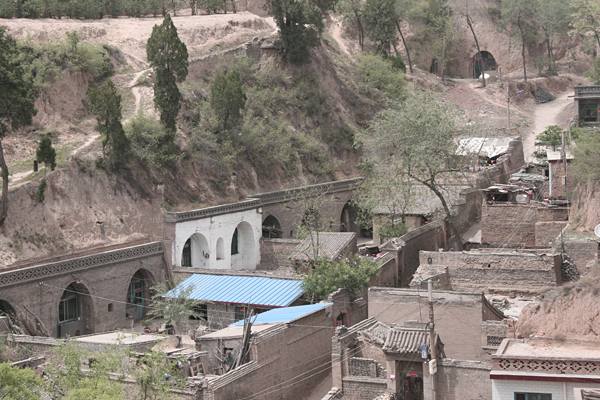 I have always wanted to find out what is the real yaodong look like after watching the variety show ” Daddy, where are you? Ba ba qu na er/爸爸去哪儿. The yaodong I went is a restaurant, this place is quite commercialize and the facilities is consider satisfying for the visitors from the big city.

One of the biggest characteristic in yaodong is their heated bed stove call “kang”/ 炕 .  One end of the bed is connected to a stove in an adjacent room, whilst another end is connected to a chimney. The kang itself is hollow, thus allowing heat and smoke to travel from the stove to the chimney, and in the process heating up the bed and the room.  I saw the kang/heated bed stove when I had my lunch and it was used as a place to keep their things.

Kang usually built in the common area of the living hall and at night it turned to be a bed and during the day time, the kang is act like a common sit area where you can have your meals on top of bed stove.

The Chinese word written in the lady toilet was quite funny, literally translate as “Auntie”. 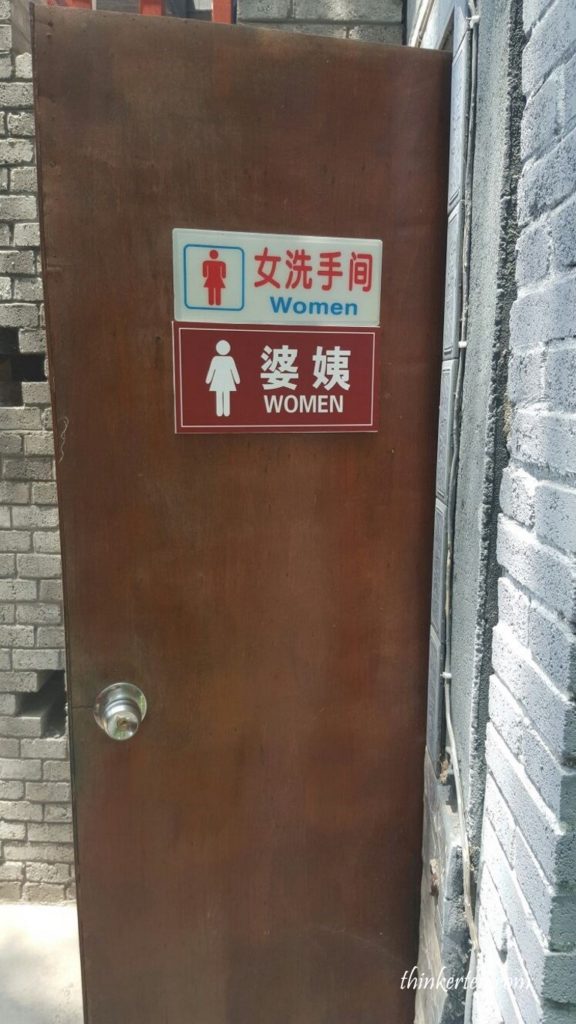 Mausoleum of the Yellow Emperor/黄帝陵 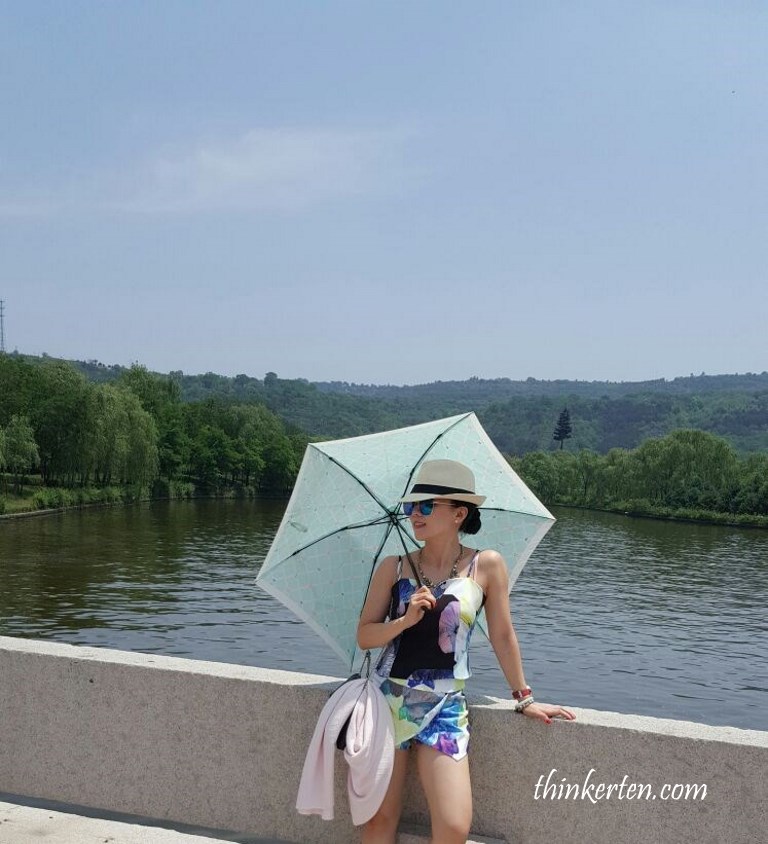 It is located in Huangling county, Yanan city, Shaanxi province. The area is very big and a lot of walking.  There is a highest scenic area where you can see the Huangdi tomb area and Xuanyuan Temple/轩辕庙 area.  Here, you can see many huge cypress trees planted thousand years ago, you can take a rest under the cypress tress and enjoy some serenity. 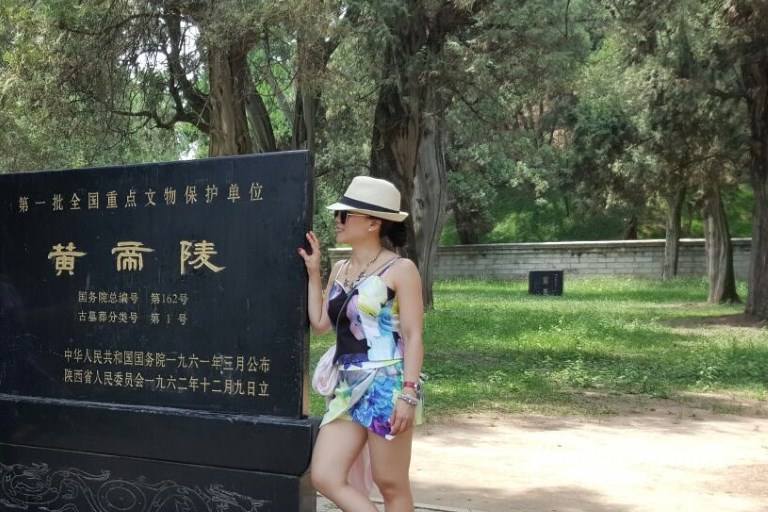 According to legend, Yellow Emperor Xuanyuan or Huangdi Emperor personally planted the cypress 4,000 years ago, and is the world’s most ancient cypress tree.  Hence, it is considered the largest cypress tree in China, also known as the “King” of cypress.   No wonder I found the cypress tree look different from the other I saw elsewhere. 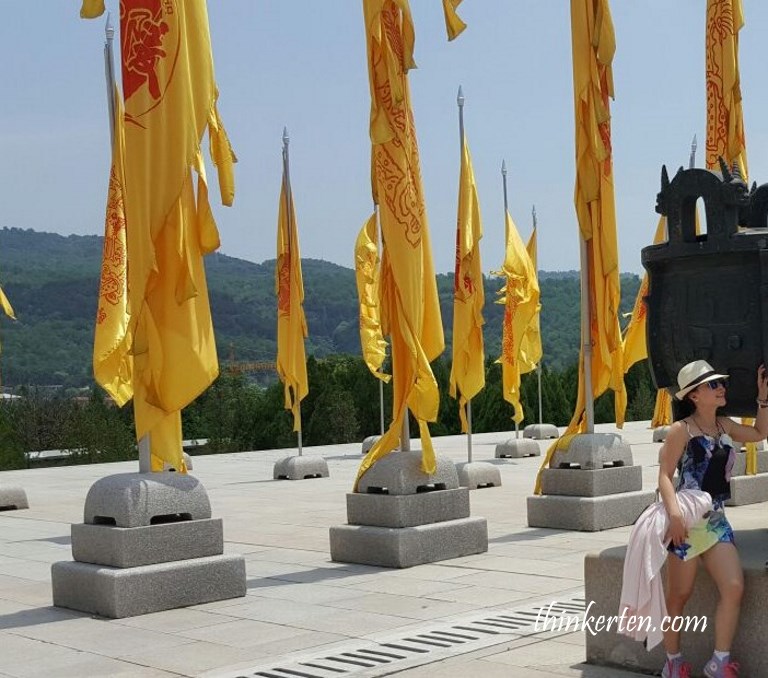 Some background of Huangdi/Yellow Emperor – the initiator of Chinese civilization, was a great tribal leader in the final primitive society of ancient times.  His family name was Gongsun. Because he grew up at Xuanyuan hill (in Xinzheng County of Henan Province), he was called Xuanyuan. The temple on top of the scenic area was called under his personal name. 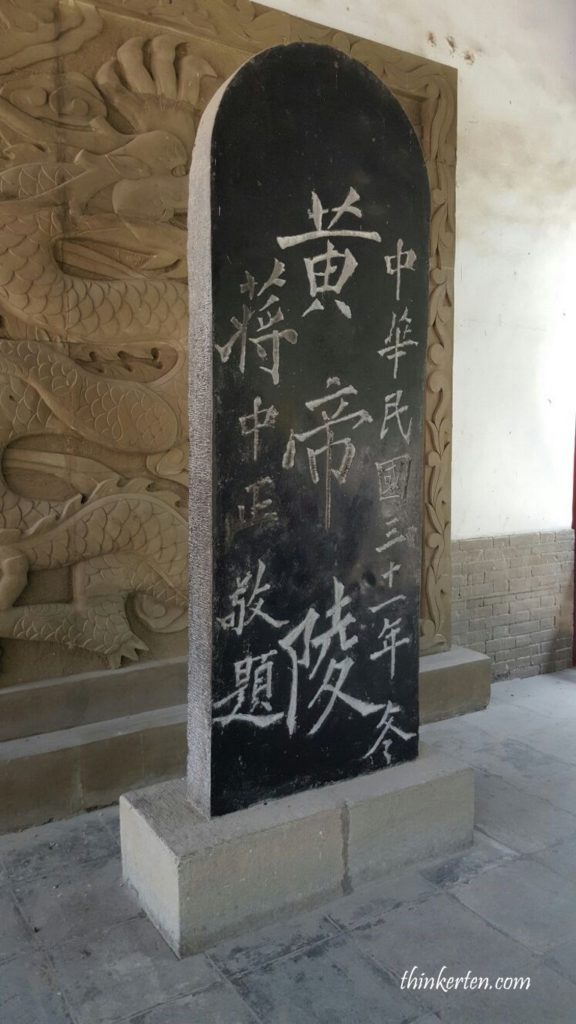 He worshiped yellow earth so people call him Huangdi.  He was able to make weapons, vessels and vehicles, and to raise silkworms. He and his contemporaries created the characters, instrument, medicines and counting system.

The burial site of the legendary Yellow Emperor is the important location where generations of emperors and famous people made offerings to the Yellow Emperor here.  Even now,  important people still coming here to offer their prayers during the Qing Ming Festival/Tomb Sweeping Day. 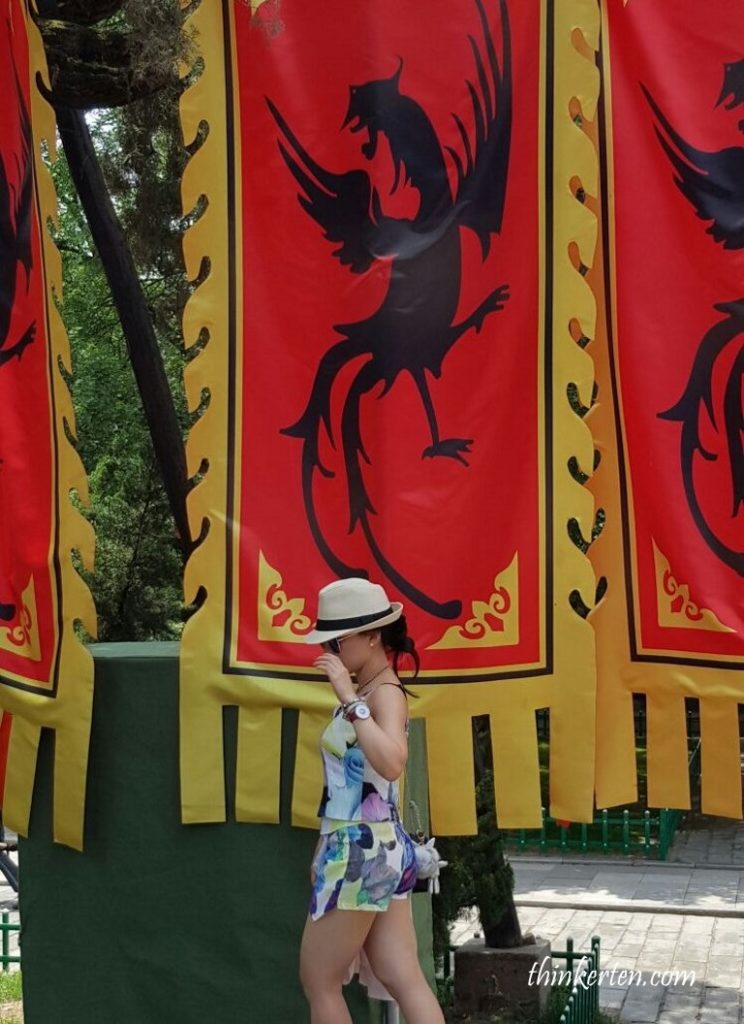 A very big square to walk before you reach the tomb.  A lot of hiking to reach the top.  Be prepare to walk a lot, a comfy shoes would be wiser and a hat and an umbrella to stay away from the heat in summer. 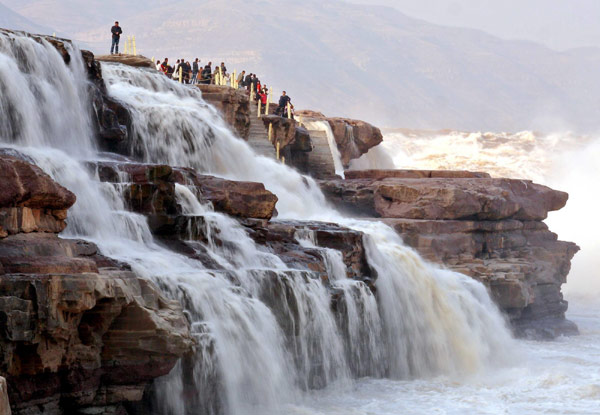 This is the largest waterfall on the Yellow River, China.  You can see how ferocious the water flowing in the Yellow River.  You may need to use a raincoat or take an umbrella when coming to Hukou Waterfall, else you may get pretty wet from the splashing of the water. 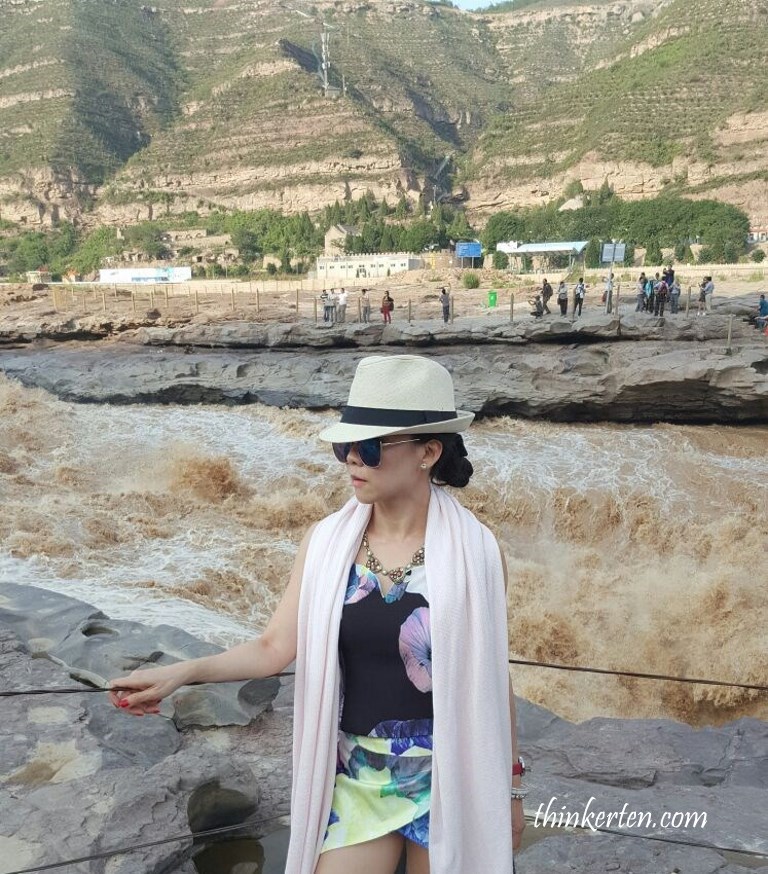 Visitors walking up and down the rocks to have a better view of the waterfall on the Yellow River, the second longest river in Asia.  There are cliffs on both side of the rivers which make it very dangerous.  Walk slowly and do not go too near to the cliff.  The rocks can be very slippery. 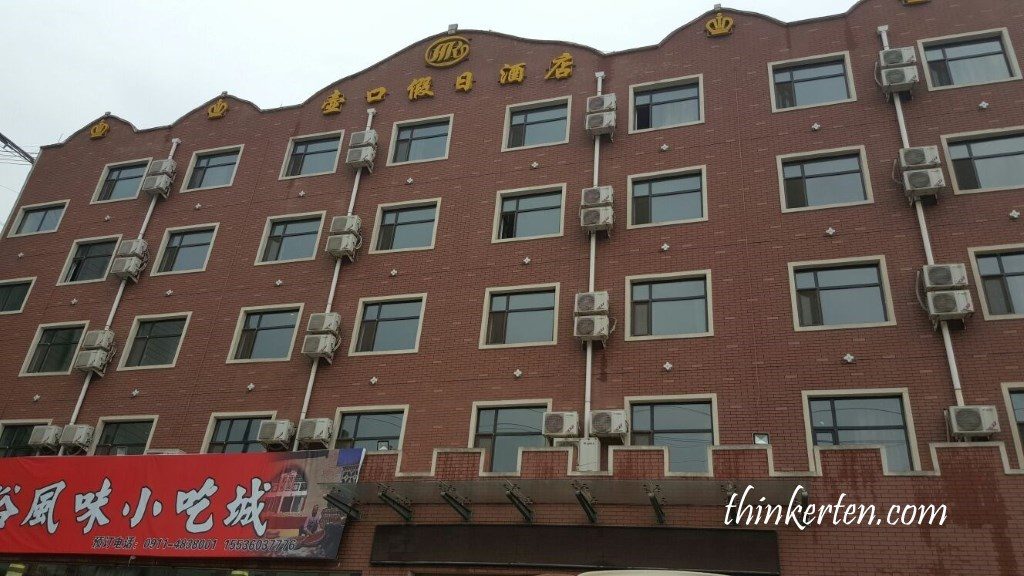 The Hukou Hotel that I stayed over was pretty simple with all the basic facilities only.  If you don’t set your expectation too high, then you will not get too disappointed.  I had the simple dinner at the hotel.  Food in Shaanxi can be pretty oily and salty.  All meals came with the very huge mantao, especially big in this hotel, double size of my fist.

I had a walk outside Hukou Hotel which is really countryside.  Saw this heading quite interesting, painted on the wall on the roadside so I just pose a model stand for picture.

It is pretty fun to stay over one night in the countryside, I was running happily in the main road.  No cars at all and I can have the wide road all by myself.  I find the infrastructure in Xian is pretty good, a lot of well built high way link to everywhere.  You would be surprised there are many clean toilets available in the middle of the highway. 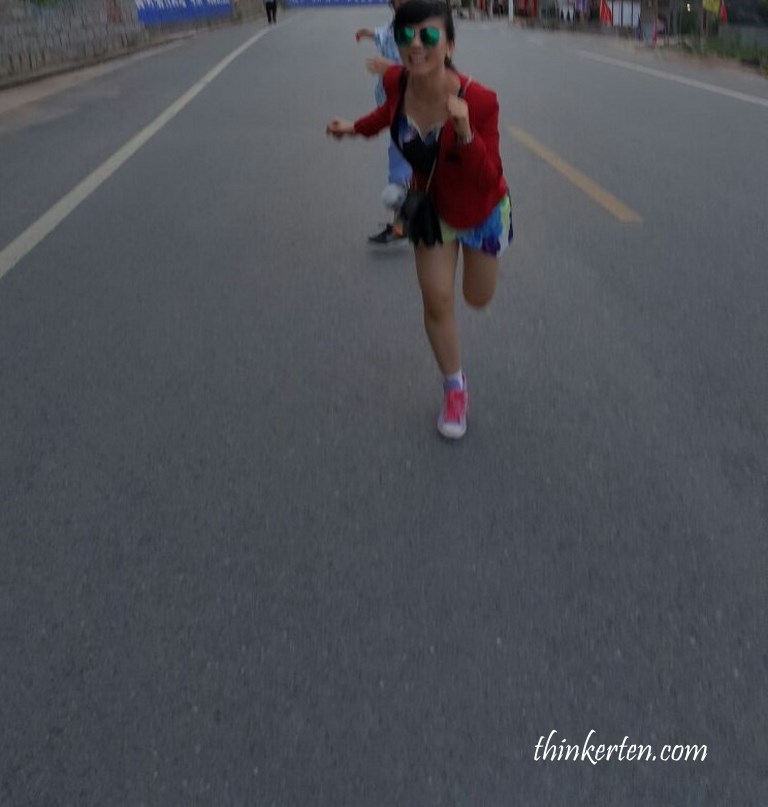 What is the real meaning of 扬眉吐气 in Shaanxi?

Below picture was taken on the highway rest area, look very clean and new! Shaanxi Province in China is now considered by the local as “扬眉吐气/Yang Mei Tu Qi”- similar reading as 羊煤土气.  Shaanxi has all the 4 important factors which make the Province very wealthy these days.

扬眉吐气 – translate in English  as holds one head high.

So you can imagine how well Shaanxi province is doing.

China Xi’an 3 – Life in Rural village in Shaanxi , see it yourself the OLD and NEW village!