Self Drive in UK : Bath in England

Have you heard of Bath in UK?  City of Bath is a popular tourist attraction in UK.  From Salisbury to Bath, take slightly more than an hour 40 miles.  If you are travelling from London to Bath, it take about 3 hours. 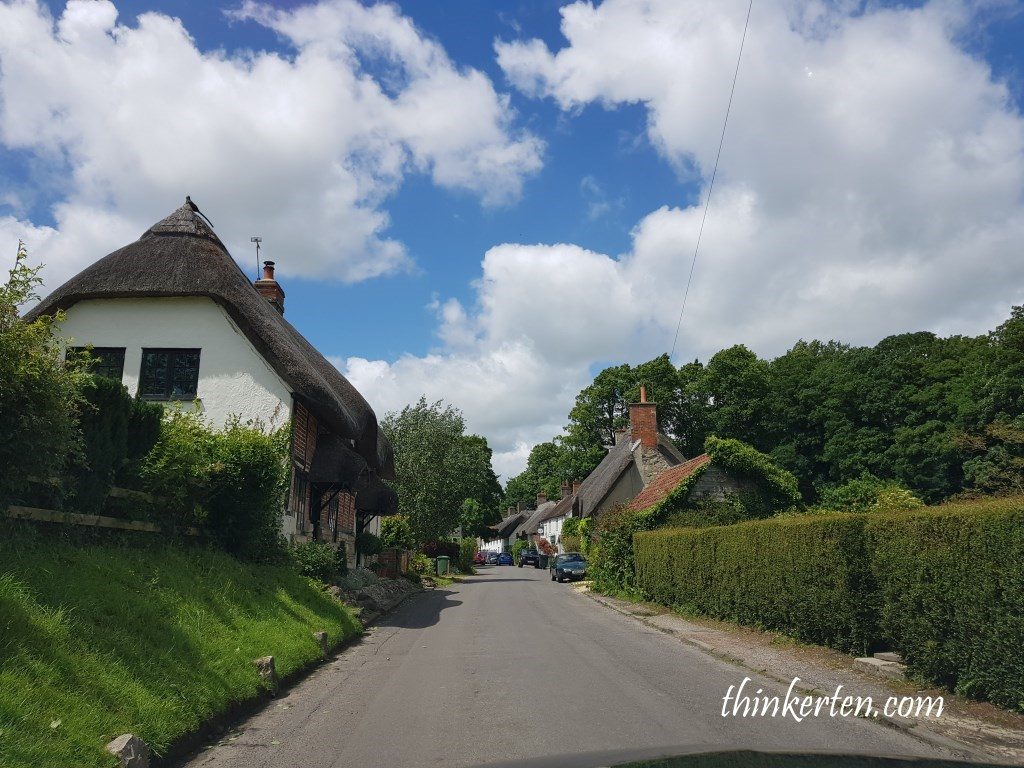 On the way to city of Bath, we passed by some unique houses in the countryside.  What took my attention was the unique rooftop. 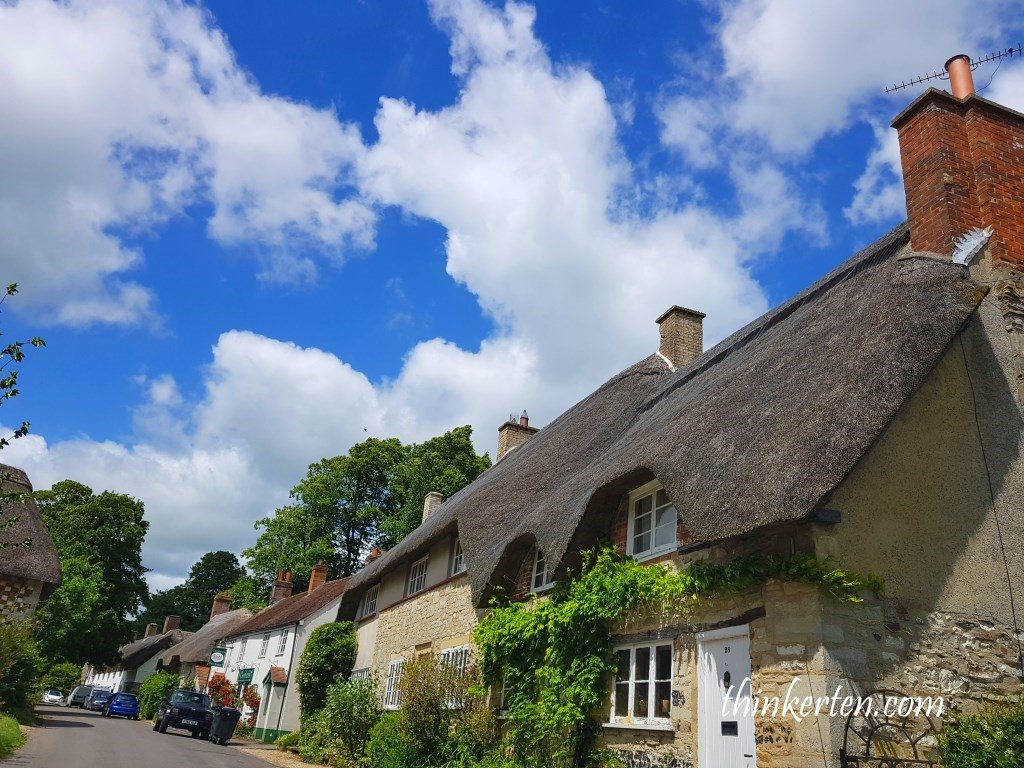 When we approached the city of Bath, the first thing to do is to find the car park.  We already knew where we wanted to park, so we just keyed in Avon Street Car Park in the GPS.  There is a ticketing machine for us to purchase our parking tickets but first we need to decide how many hours to spend in the city of Bath.  We roughly estimated 3 hours so we inserted GBP 4.30 into the ticket machine for 3 hours parking ticket.  There are 2 things I dislike about this ticketing system.

1.You need to do a rough estimation of how many hours you will spend.  You need to purchase tickets before exit to the car park.

Luckily not all public car park in UK have such system.  Some car park are more efficient, once you entered you can just grab the parking ticket at the machine and just paid on the way out.  Be prepared of more coins, as some machines only accept coins and no return on small changes.  I was lucky enough to met a nice couple who agreed to break my paper notes to coins.  Else I have to walk across the street, at least 1 km to find small coins.

Where to park in City of Bath? 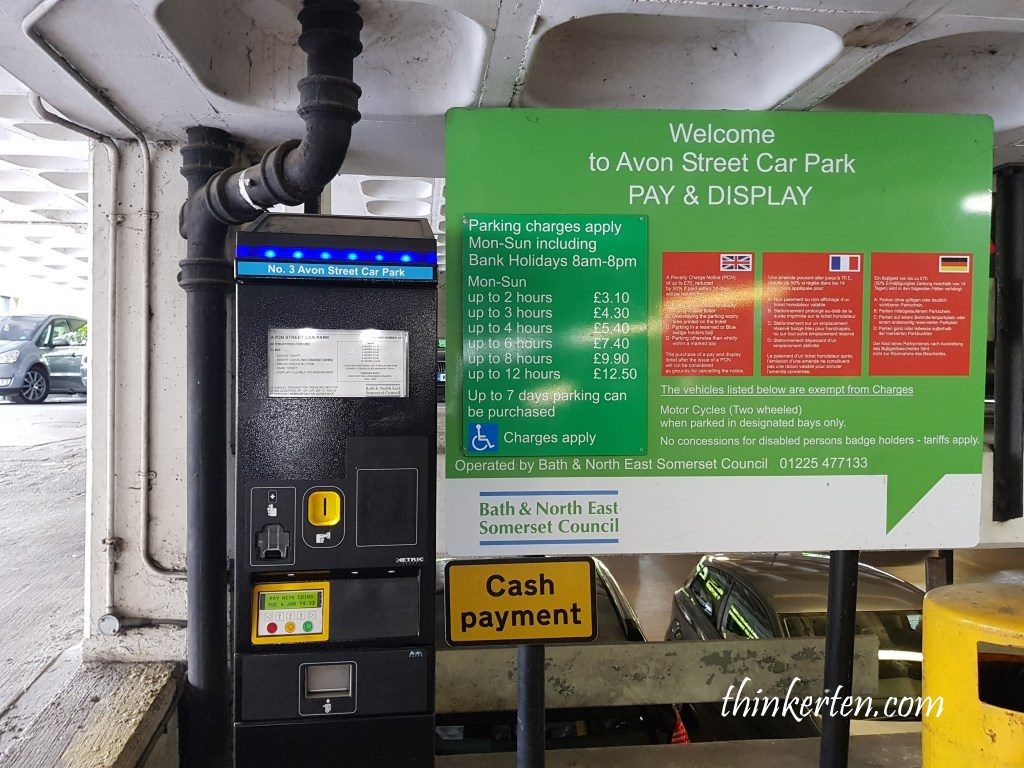 Walking from the car park to city of Bath, it was drizzling and luckily I have prepared some poncho, knowing UK weather has a frequent drizzling and rain. 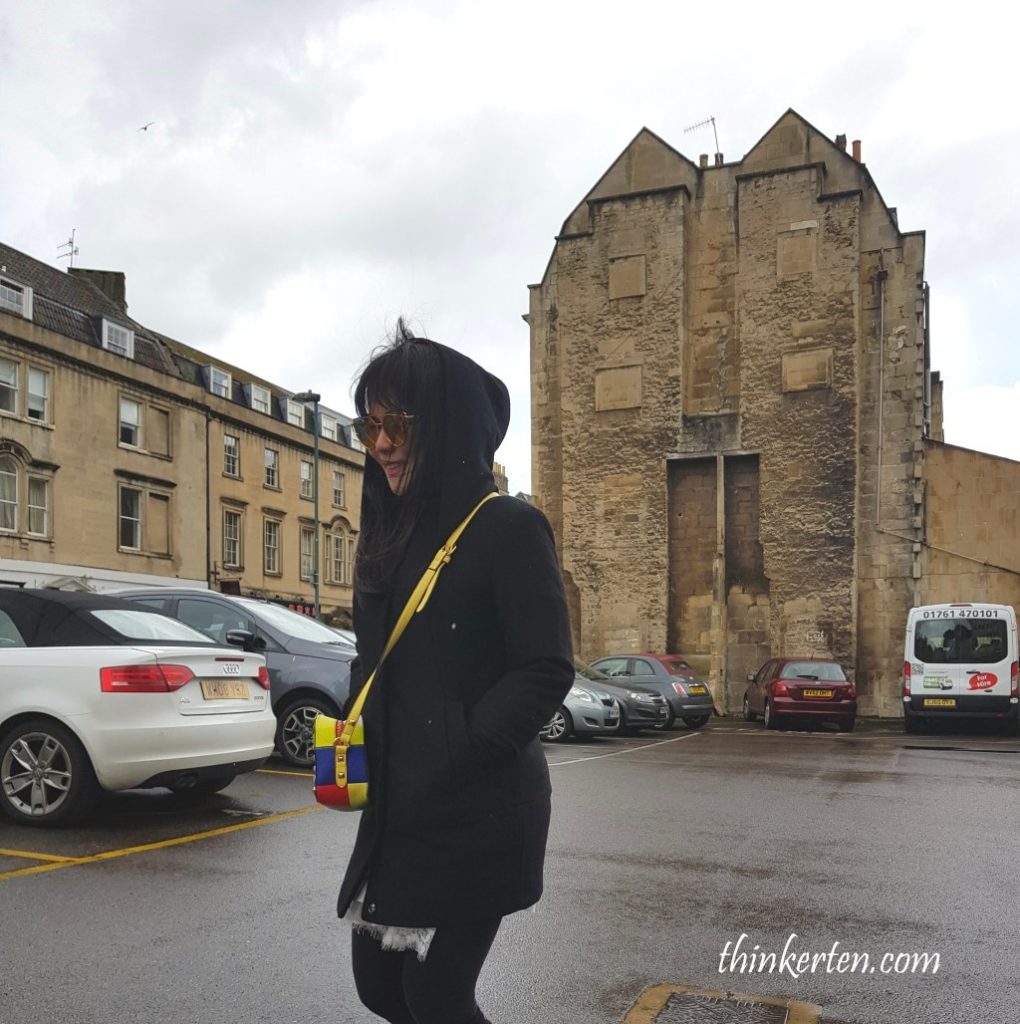 Bath is in the valley of the River Avon, no wonder the car park we just parked our car name it Avon car park. The city became a World Heritage Site in 1987 so expect a lot of tourist in this city. 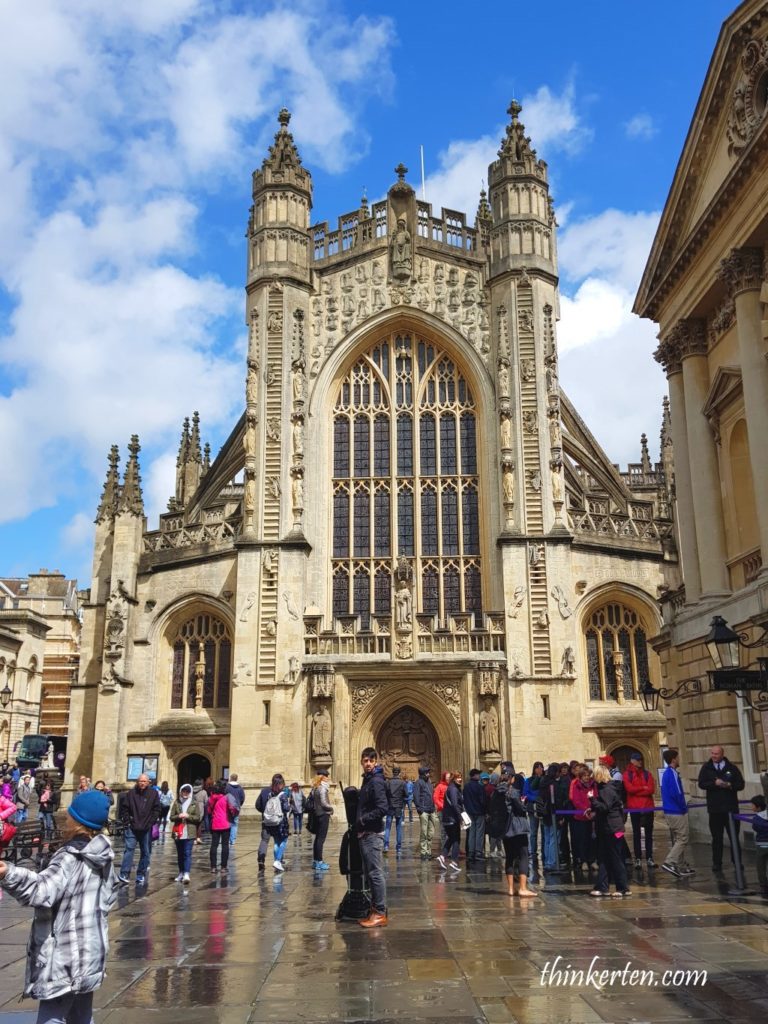 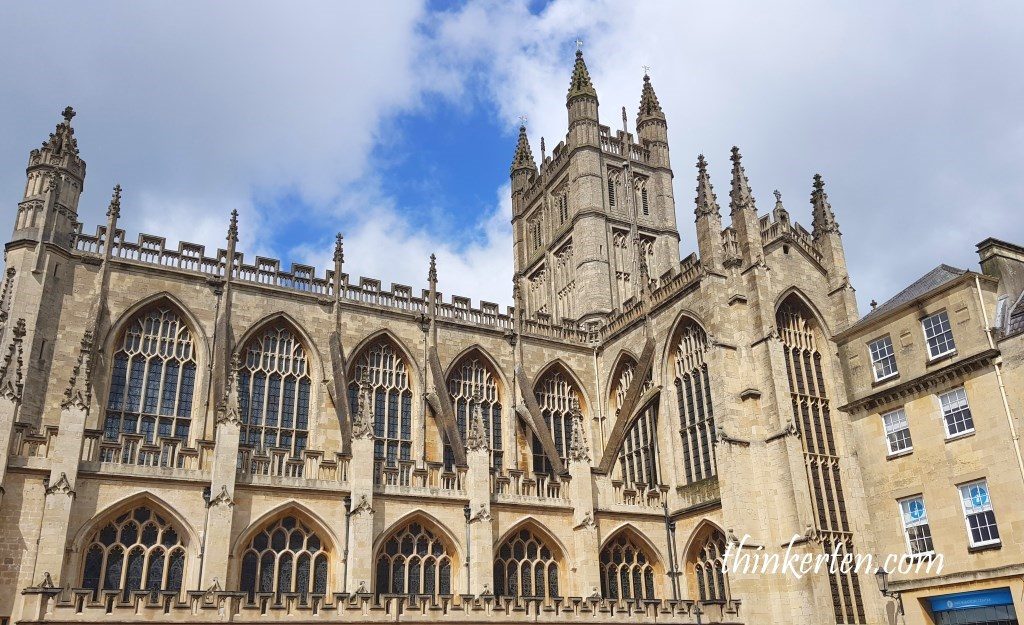 You can enter if you want to, pay a suggested donation of GBP 4 for an adult and children is GBP 2.  We have visited the Salisbury Cathedral so we were too tired to check out another church so we just took few pictures from the outside instead.  You see, the Salisbury has a big space in front with green lawn but the Bath Abbey is situated in the city together with many buildings beside and around it so it is quite hard to get a nice picture of you and the building.  Anyway, you can still go in and admire the architecture and the magnificent stain glass window. 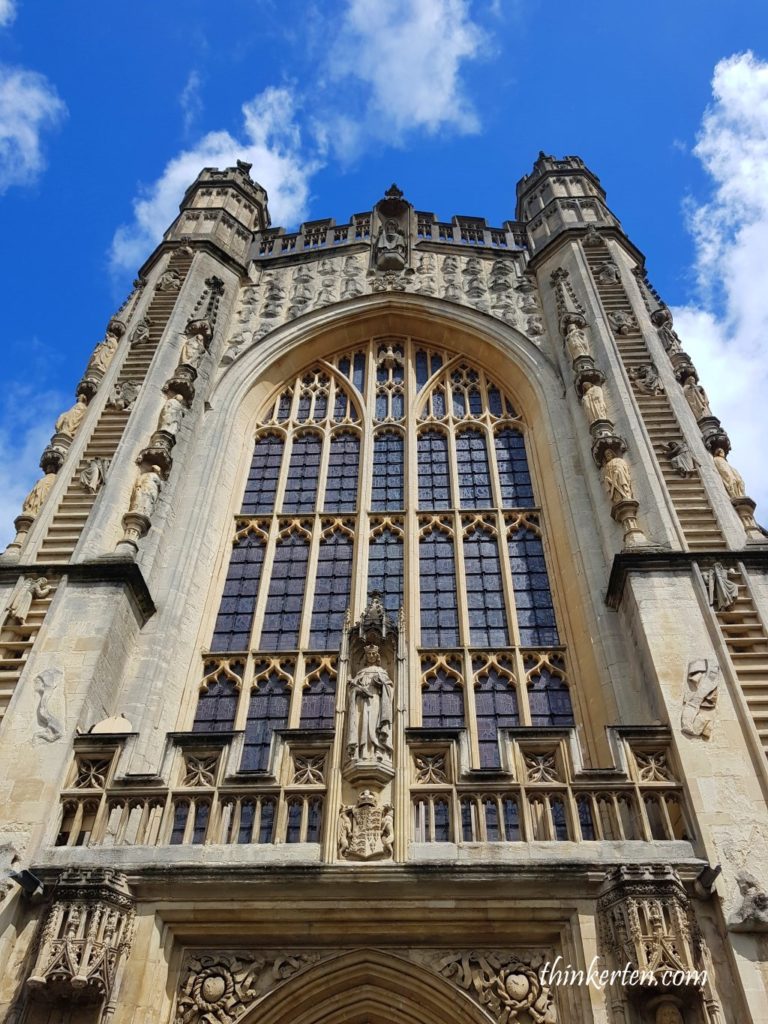 Suddenly the rain get heavier and I took out my poncho and wore it.  It was very windy, not sure if the umbrella can survive.  Look at the way I walk, like a pink snail crawling pretty slowly. 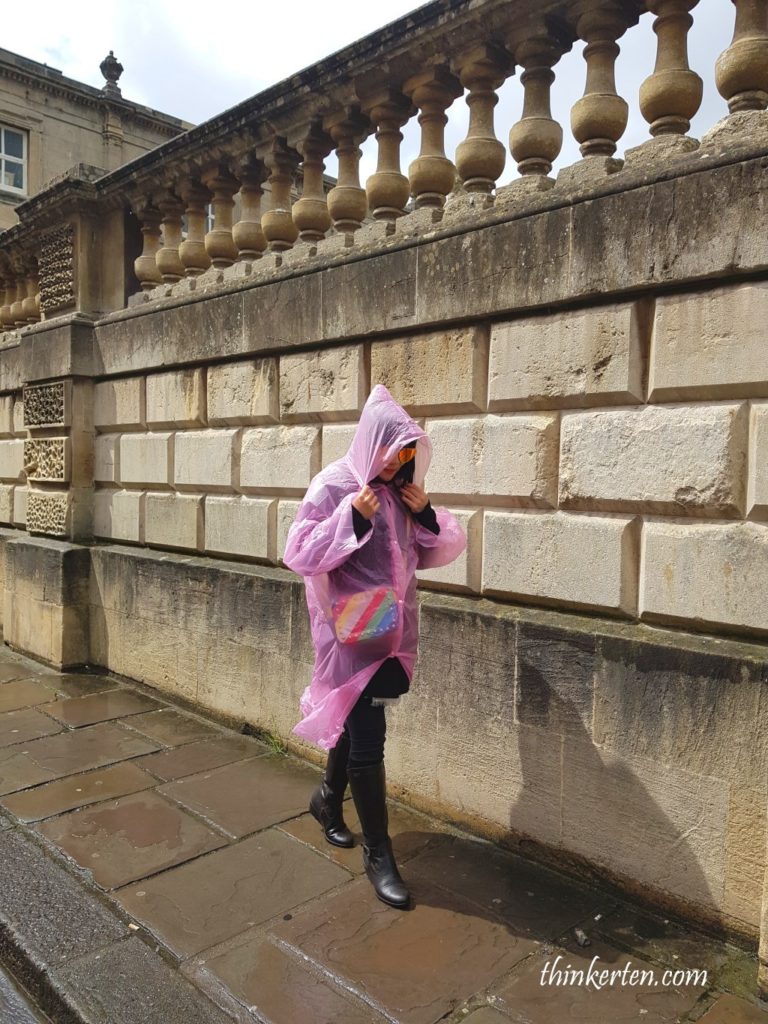 The city of Bath is full of old building and architecture.  Just open you eyes wide and enjoy the surrounding. 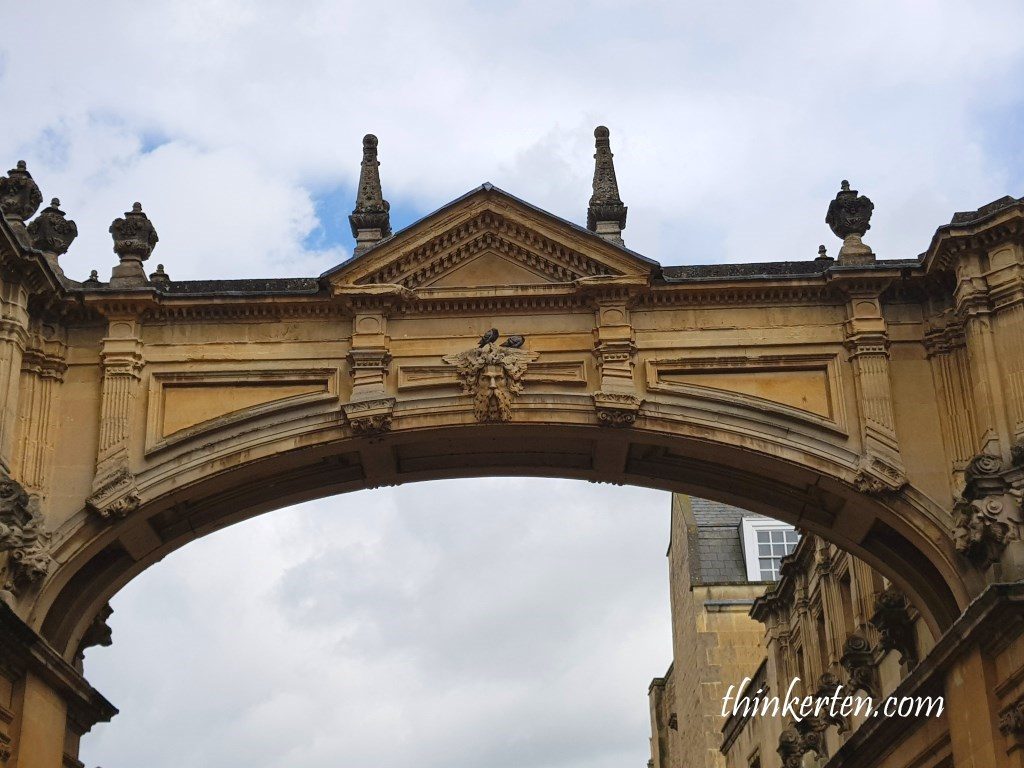 Finally reached the Roman Baths Museum!  We were quite delighted when we reached the door of Roman Baths but then we were being stopped by the staff and asked us to queue for ticket at the other side.  We were quite shocked at the long queue, we waited for almost half an hour under the rain for our tickets.  What does it imply? 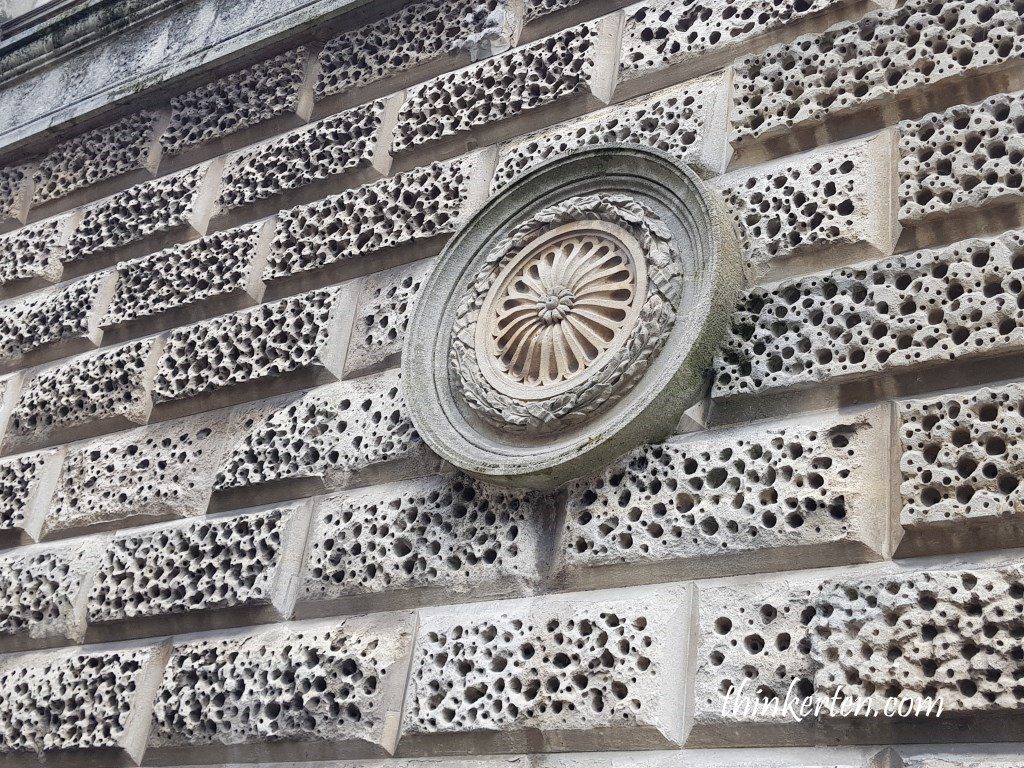 Roman Bath is the must visit place in Bath.  If you don’t come to Roman Bath mean you have not been to the city of Bath. 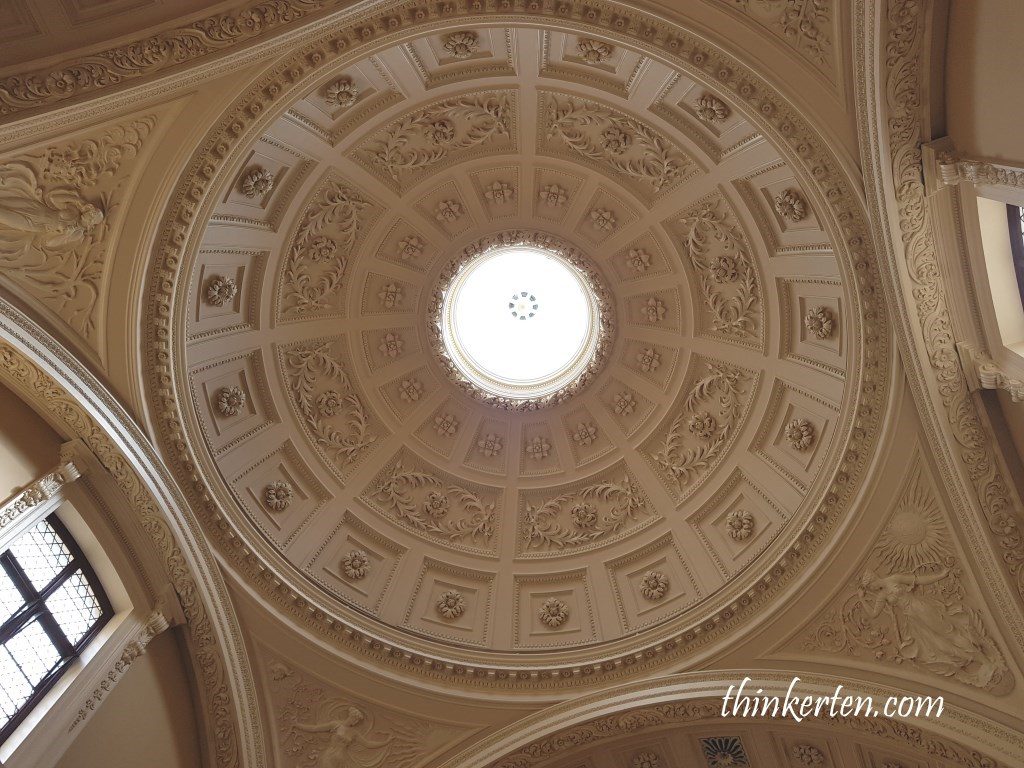 After purchasing our ticket, we were given audio guide but not earpiece.  It was quite tiring to hold it and listen like a phone throughout the 2 hours in the museum.  Luckily I have brought along my own earpiece and could just hand the audio guide on my neck and walk around with both hands empty. 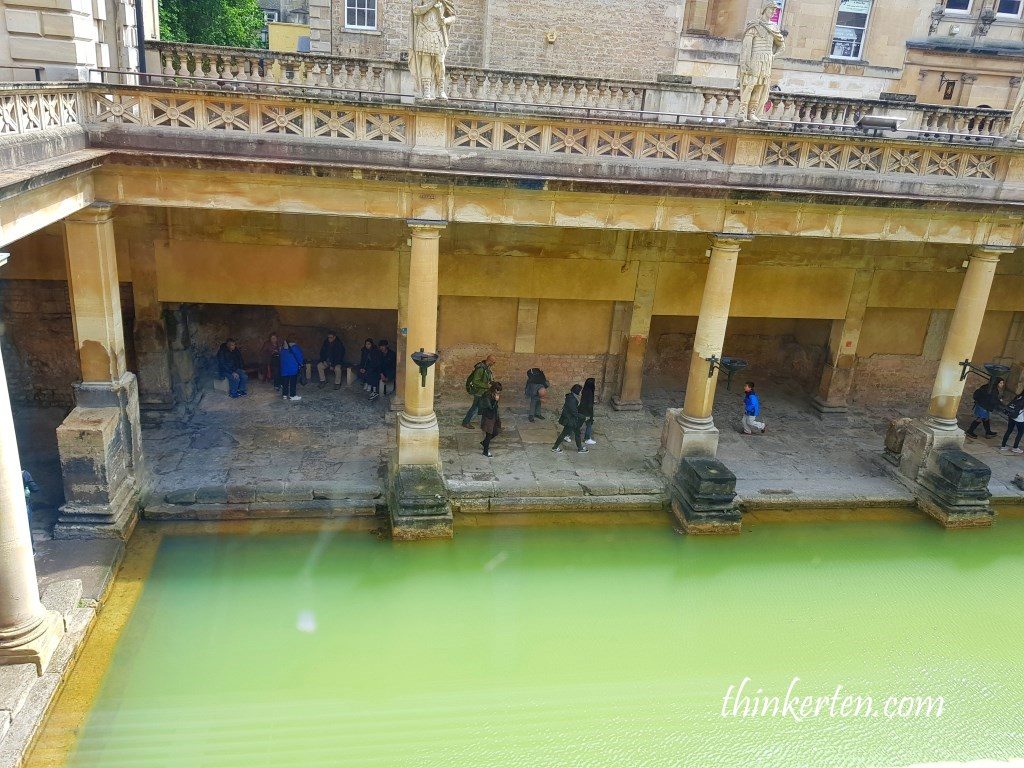 What is this place for? Yes, you are right, this is place for public bathing but that was 2000 years ago not now.  Visitor can only see and no touching of the water. It has natural hot springs with steaming water playing a key role throughout its history. In fact, this site is the best preserved Roman remains in the world. That’s why the queue to enter this museum is so long just now. 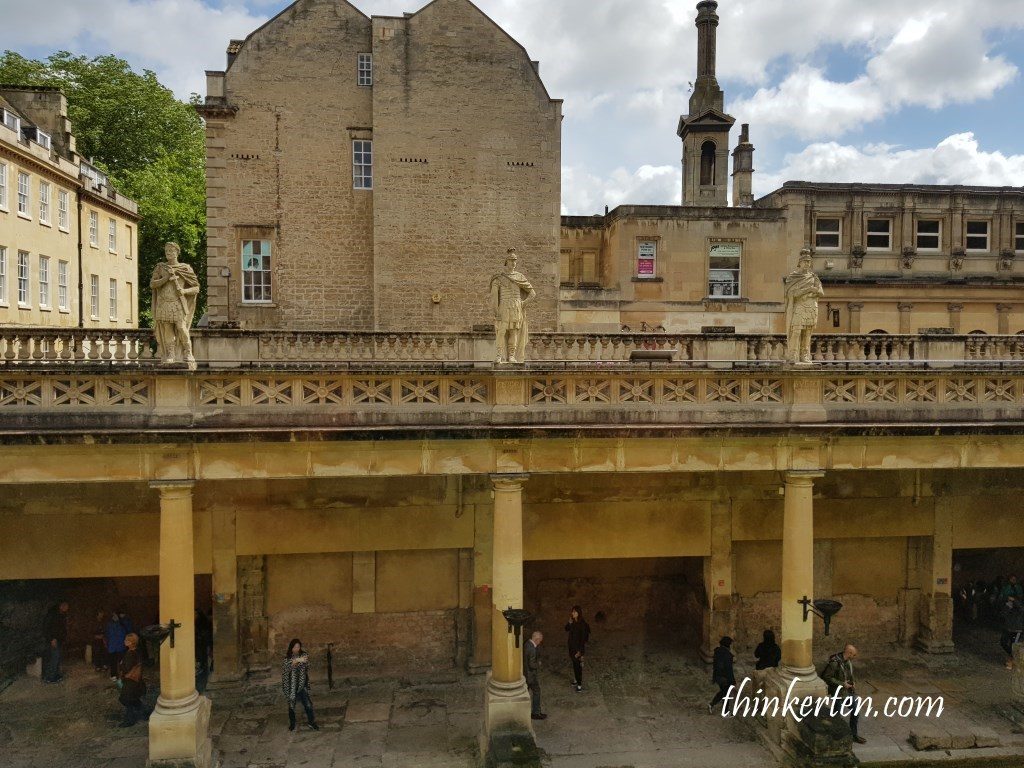 A map showing the Roman site, the museum is very big.  It took us more than 2 hours to complete the tour.  If you interested in all the artifacts and location,  I think you need 3-4 hours.

Why the water is so green and look a dirty?

This is because tiny plants, the algae grow in it. In Roman times the roof over the bath would have kept the light out and so stopped the algae from growing. 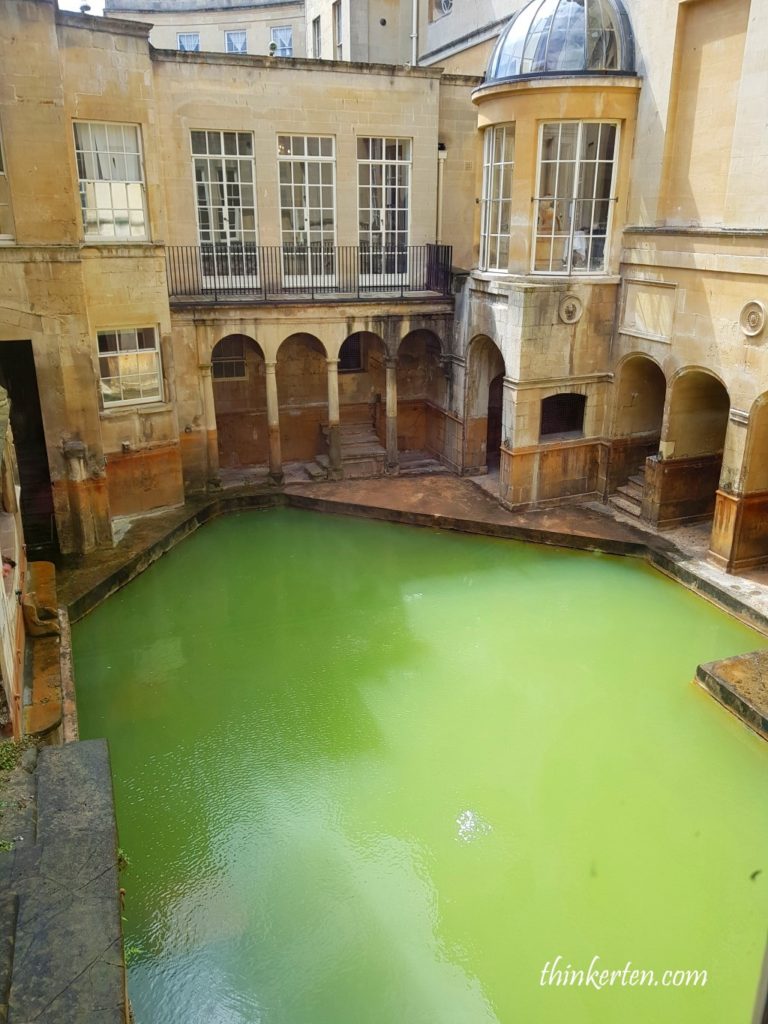 From the below picture, you can see how painful the visitors using the audio guide without the earpiece.  All holding with one hand and body a bit slanting to the other side, as it having a toothache.  No joke, it is quite tiring holding it for the 2 hours plus.  Not sure why they did not provide ear piece. 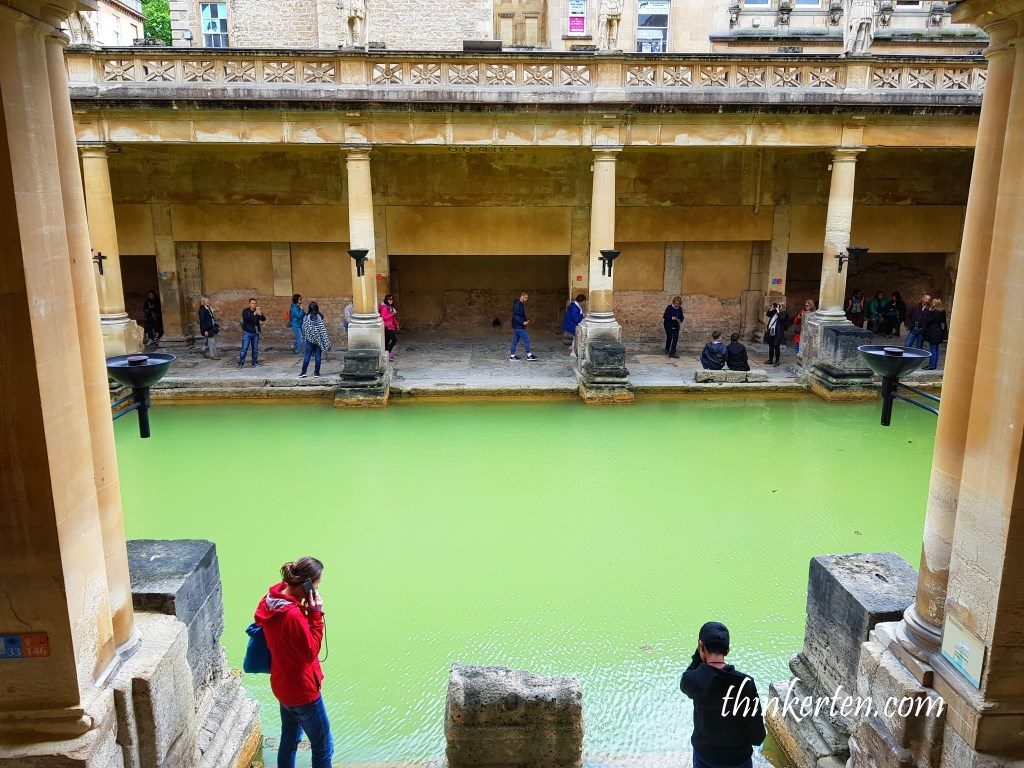 Some museum artifacts, taken us quite long to listen to all of these stories. 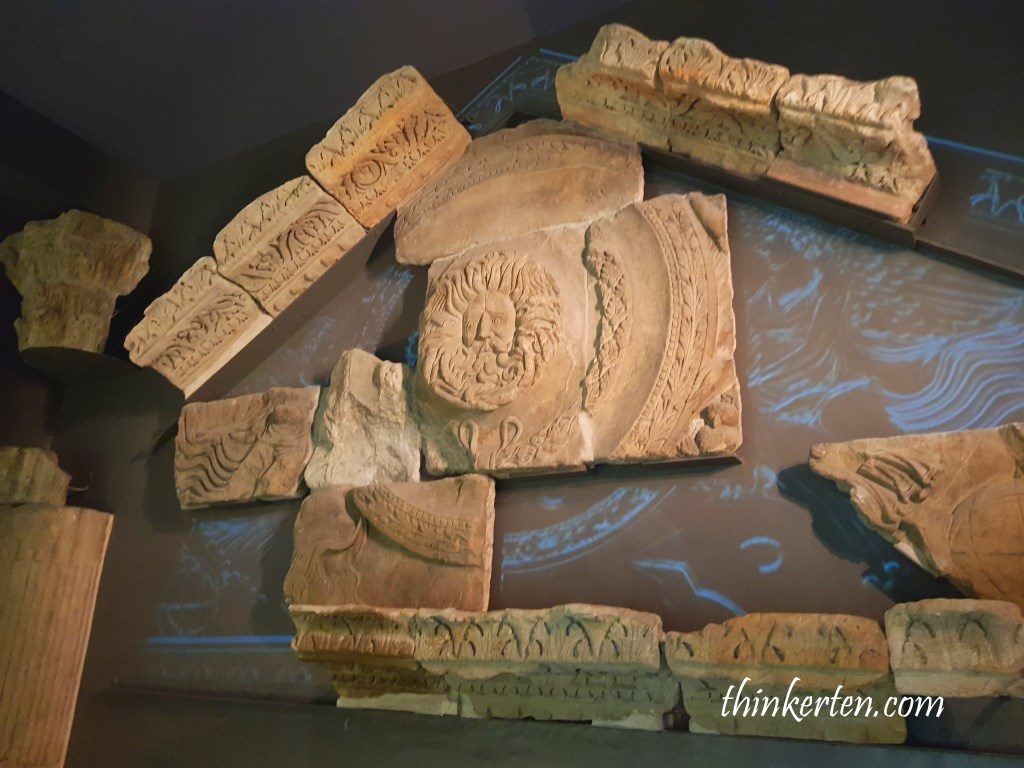 This special piece was quite stunning, look at the hair this lady had.  What does it tell us?  It mean power,  the bigger the better and more power.  This statue head show some important lady boss who had many maids who helped her with her hair daily to maintain such style. 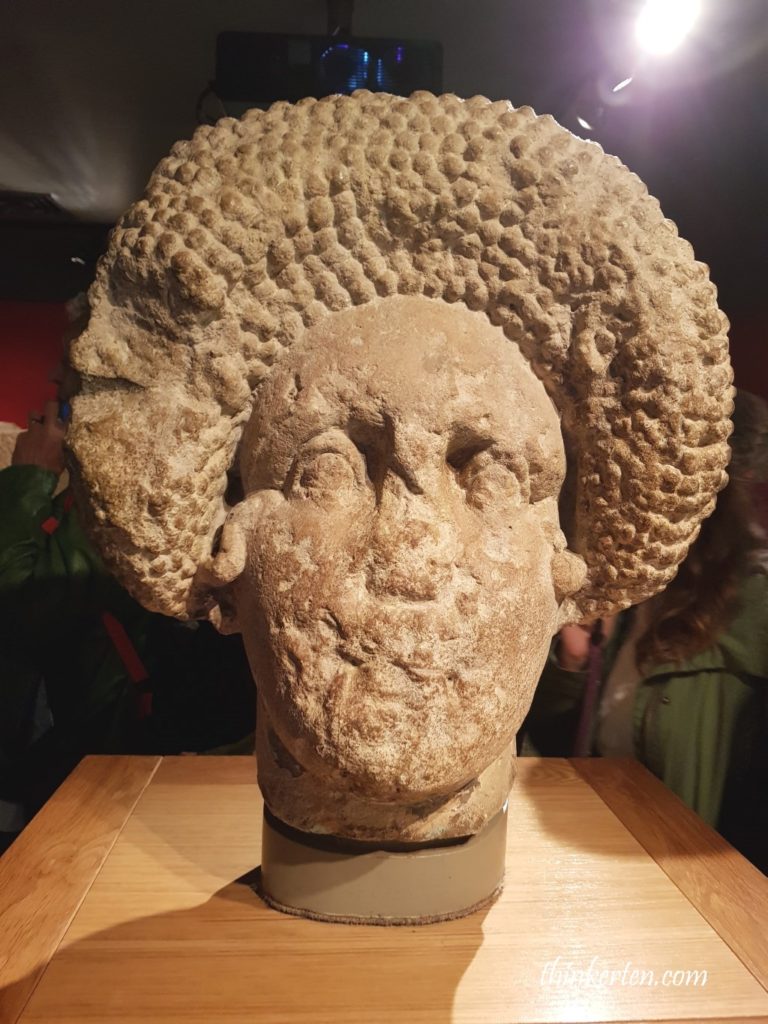 Some mosaic tiles arts displaying ancient arts on the floor in the Roman Bath Museum. 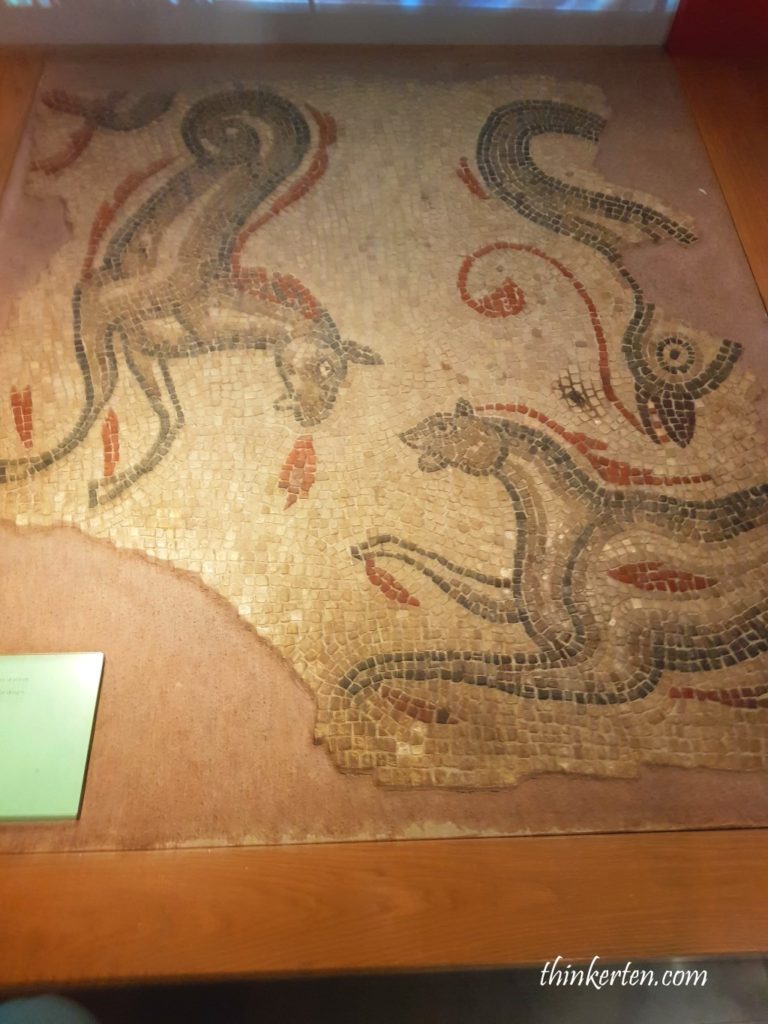 A Roman Goddess found in the Baths 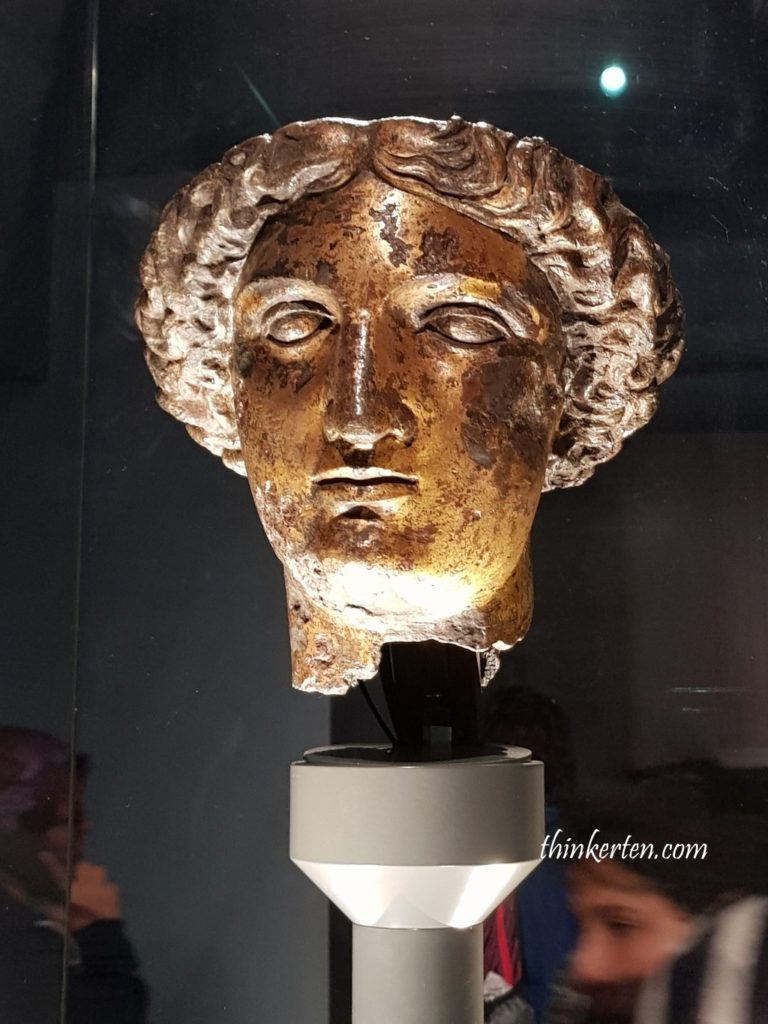 Some guys who wore like ancient Roman for the visitors to take pictures. 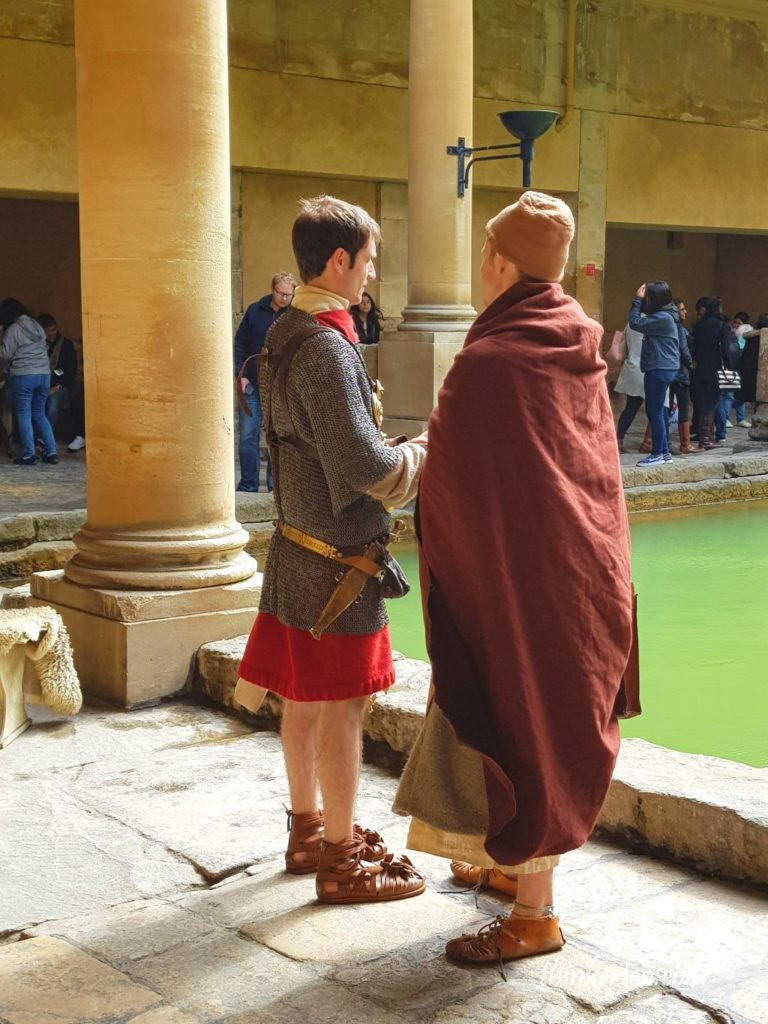 You can see visitors were sitting down to listen the stories from the audio guide.  Trying to imagine as they walk among the foundations, smell the hot waters, remembered you are not allowed to touch, only see and smell. View the artifacts and the engineering of water system that is 2,000 years old. 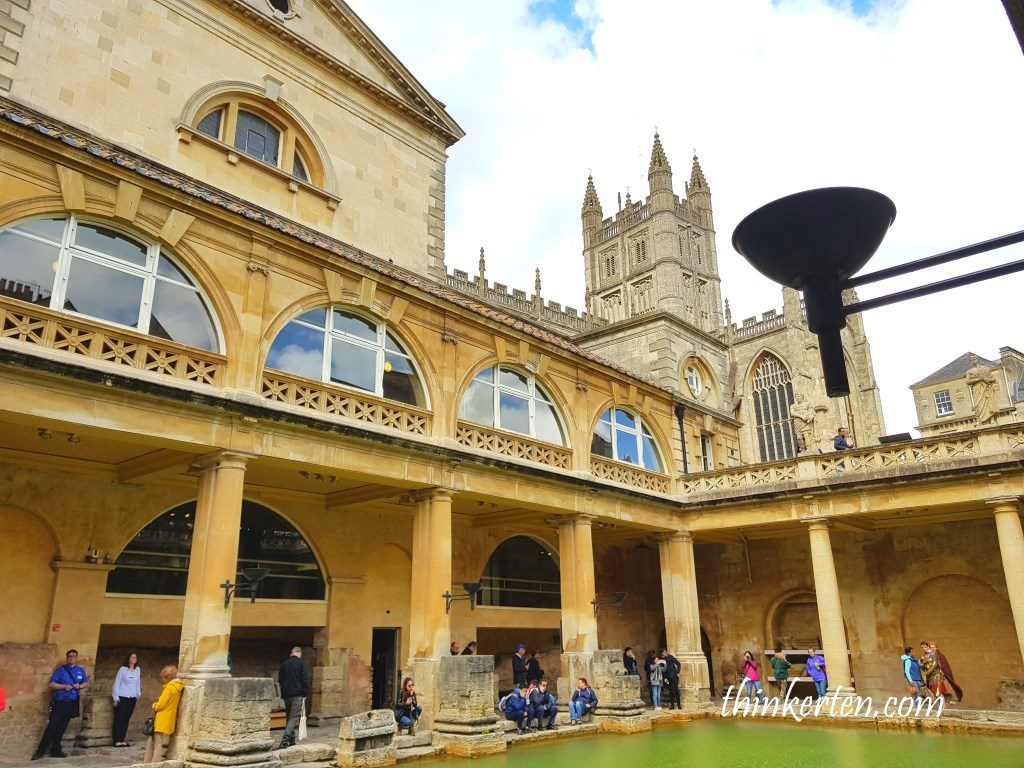 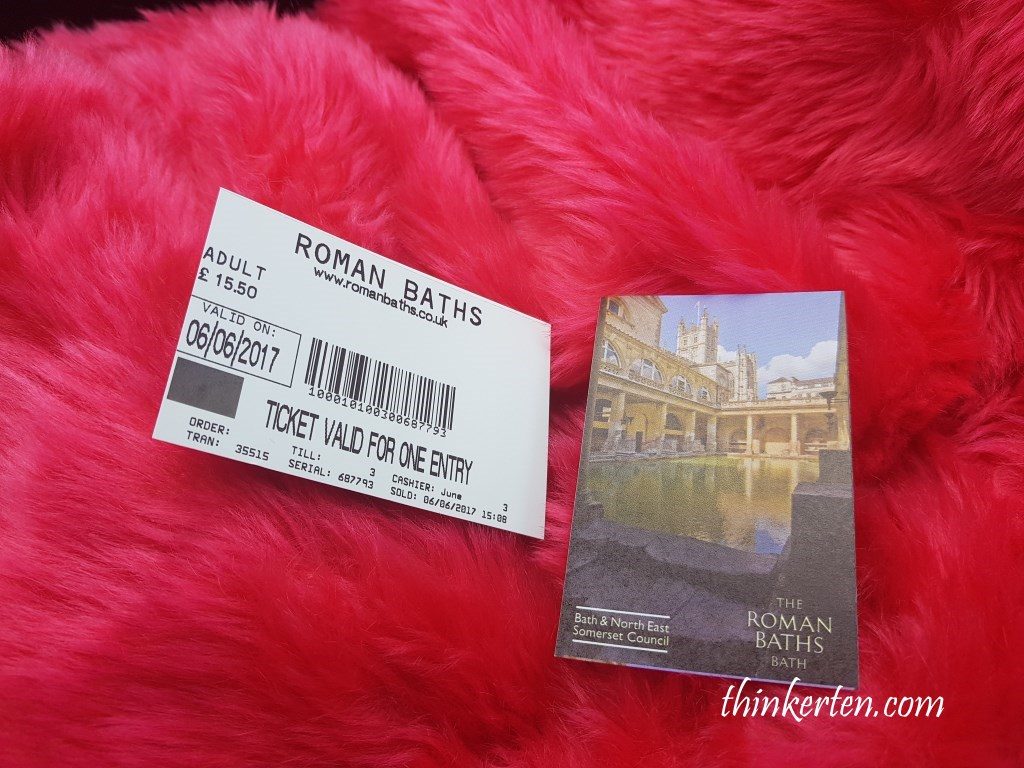 Walking streets in city of Bath

After we get out from the Roman Baths, we walked around the city and were a bit lost to get back to the Avon Car Park.  Found these umbrellas hanging at the walking streets at the mall quite interesting. 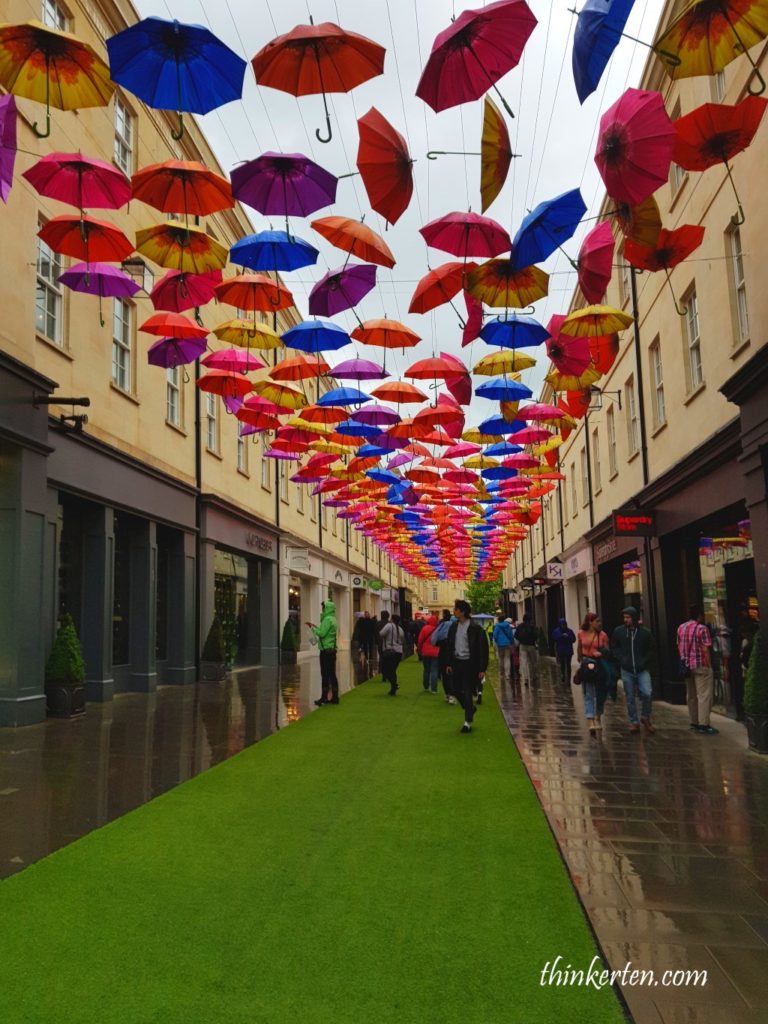 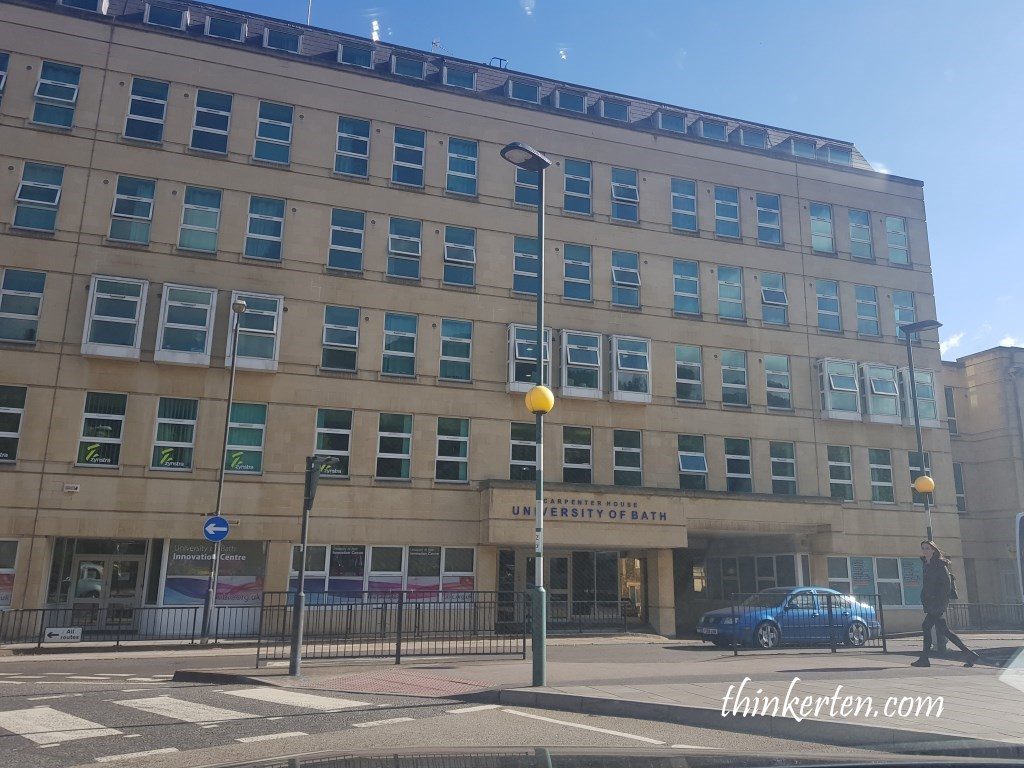 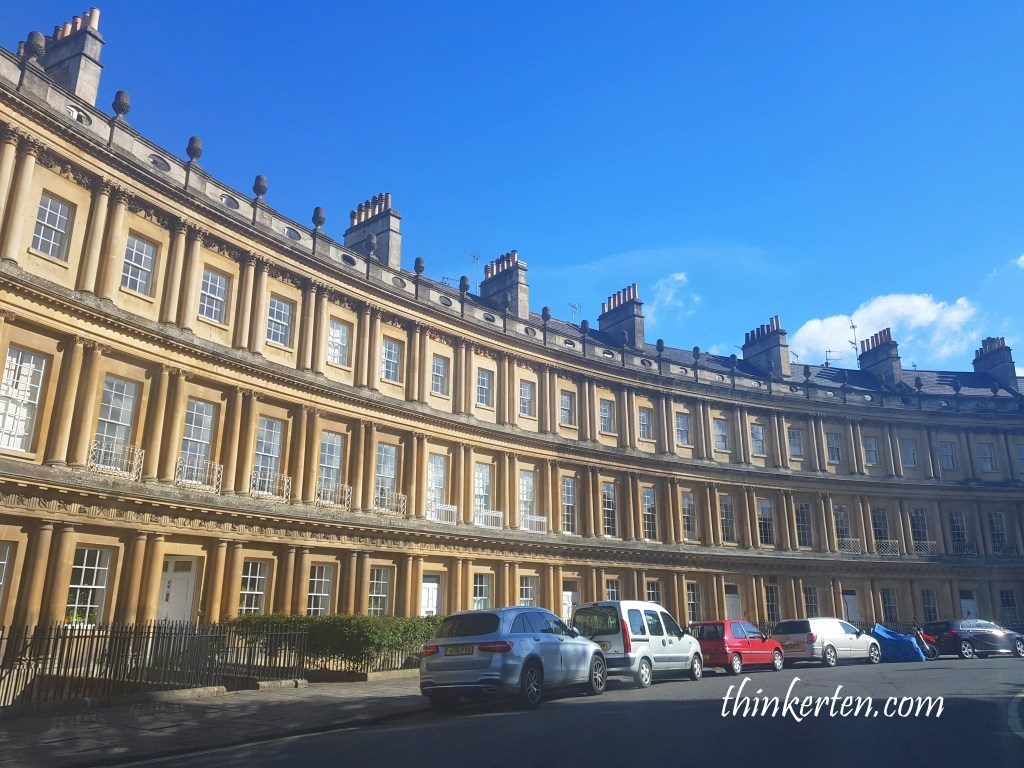 Passed by a row of terraced houses laid out in a sweeping crescent in the city of Bath, it is called the Royal Crescent. The houses were built for more than 250 years old. Many notable people have lived in the Royal Crescent since it was first built.  It really took my attention when we passed by this area by car. Pretty amazing view, not really able to show it in the pictures here as I did not turn my camera into panoramic view. 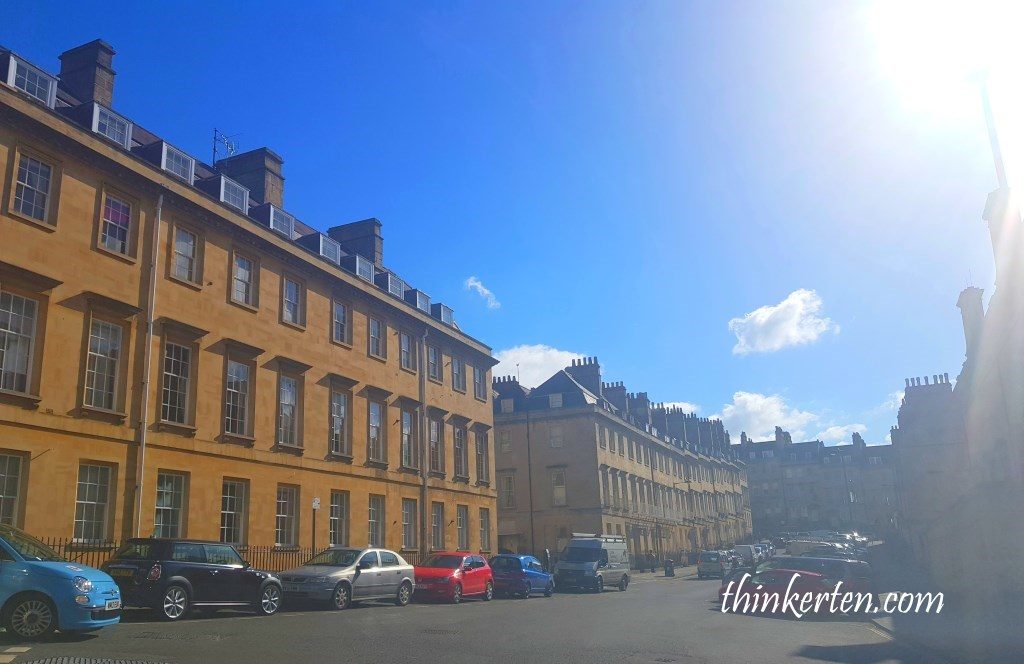 You can find beautiful churches everywhere in UK.  Saw this small church in Bath on the roadside. 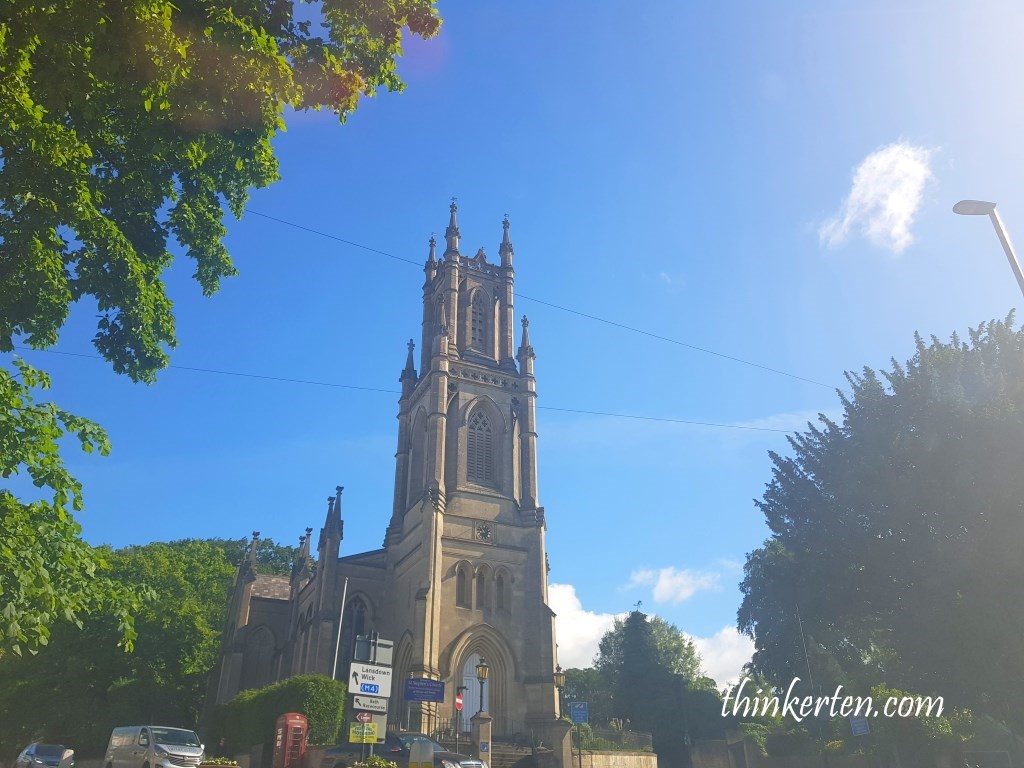 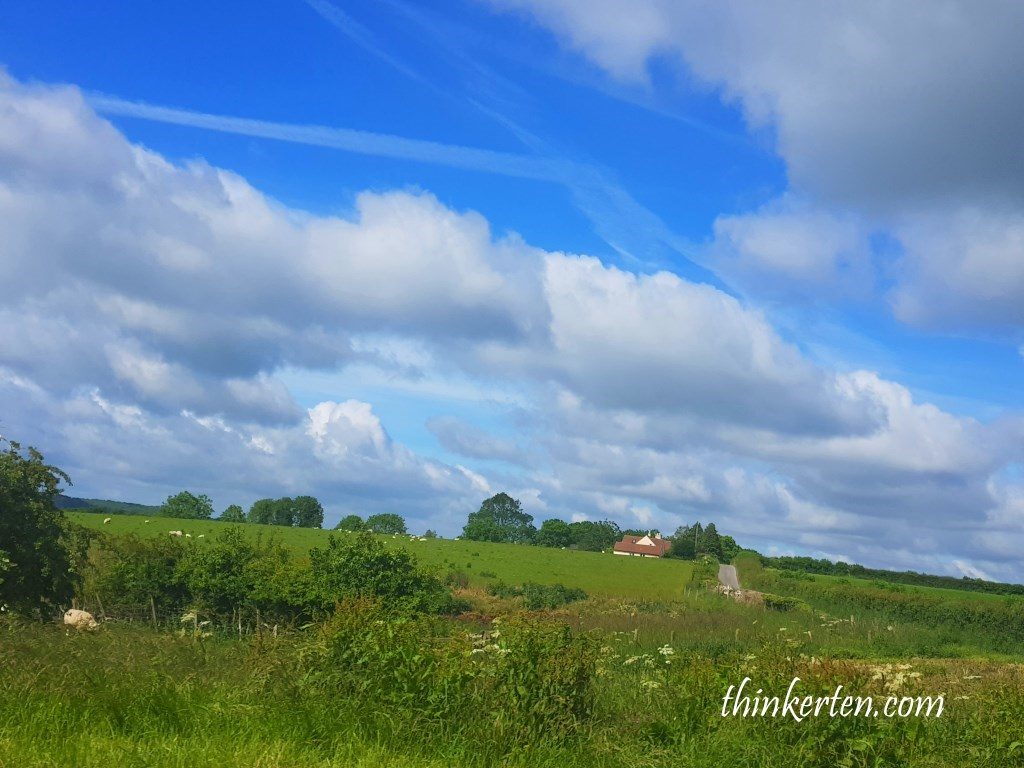 Self Drive in UK : Bath

Self Drive in UK : Salisbury & Stonehenge in England

Self Drive in UK : Cardiff in Wales