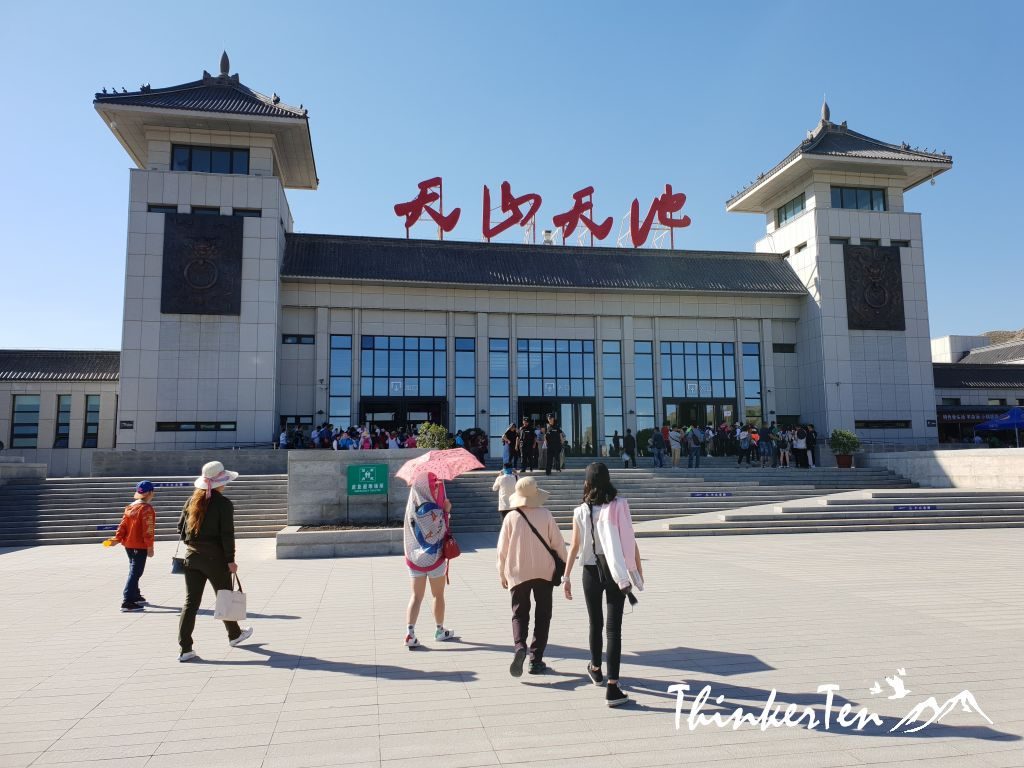 A beautiful Lake called “Heavenly Lake” / Tianchi is a Unesco site at the Heavenly Mountain / Tian Shan near Urumqi Xinjiang. We departed from Urumqi early in the morning to Tianchi which took us about 2 hours. The Heavenly Mountain is a mountain range located in the east of Central Asia area, stretching from Xinjiang to Kazakhstan. The highest peak in Tian Shan can go as high at 7400 + meter!

Security is tight in Xinjiang and same goes with Tianchi scenic area. When our bus stopped at the car park, all of our passport needed to bring down to the police station for ID check. After that, we have to go through another round of security scan on our physical body at the entrance where we gotten our ticket.

Check out the top things to experience in Heavenly Lake of Tianshan! 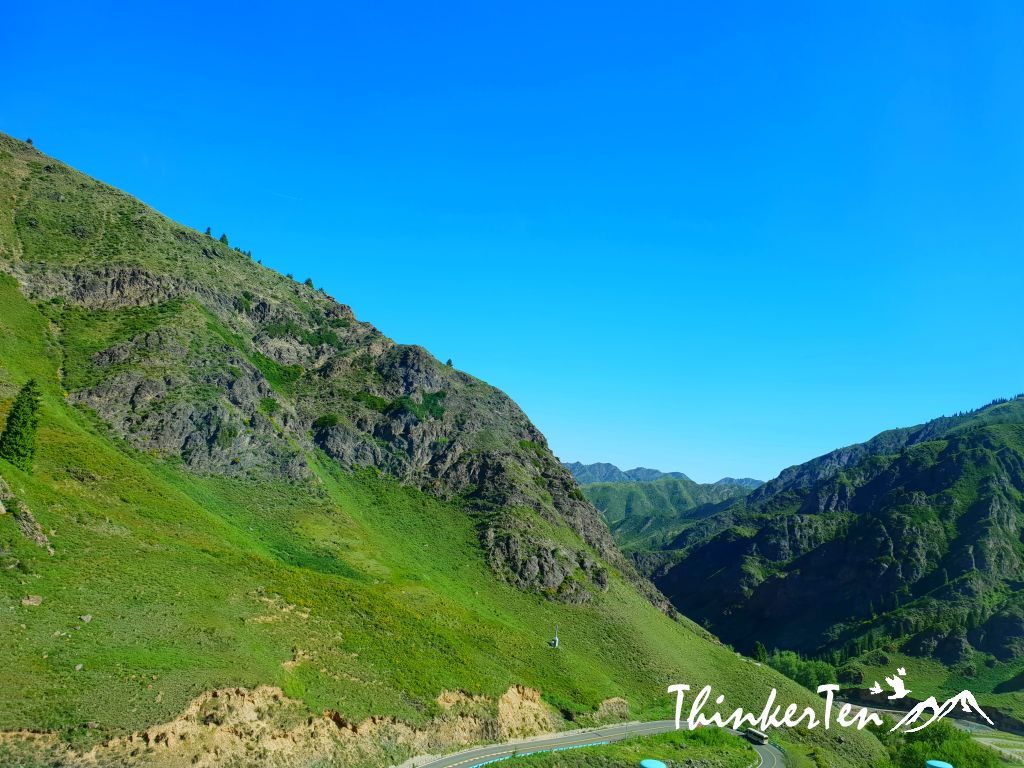 There are only internal buses operating in this reserve park. This is winding road and you may experience car sick, please be warned.  However you will be rewarded with picturesque view along the winding road.  The journey take you roughly 40 mins.

There is a stop at the Kazakh Village which we didn’t stop by, according to our guide it is just a tourist traps, selling some souvenirs and snacks.  You don’t have to waste much time there. Getting in and out of the buses plus the queuing part can be quite annoying consider the large crowds, especially in summer. 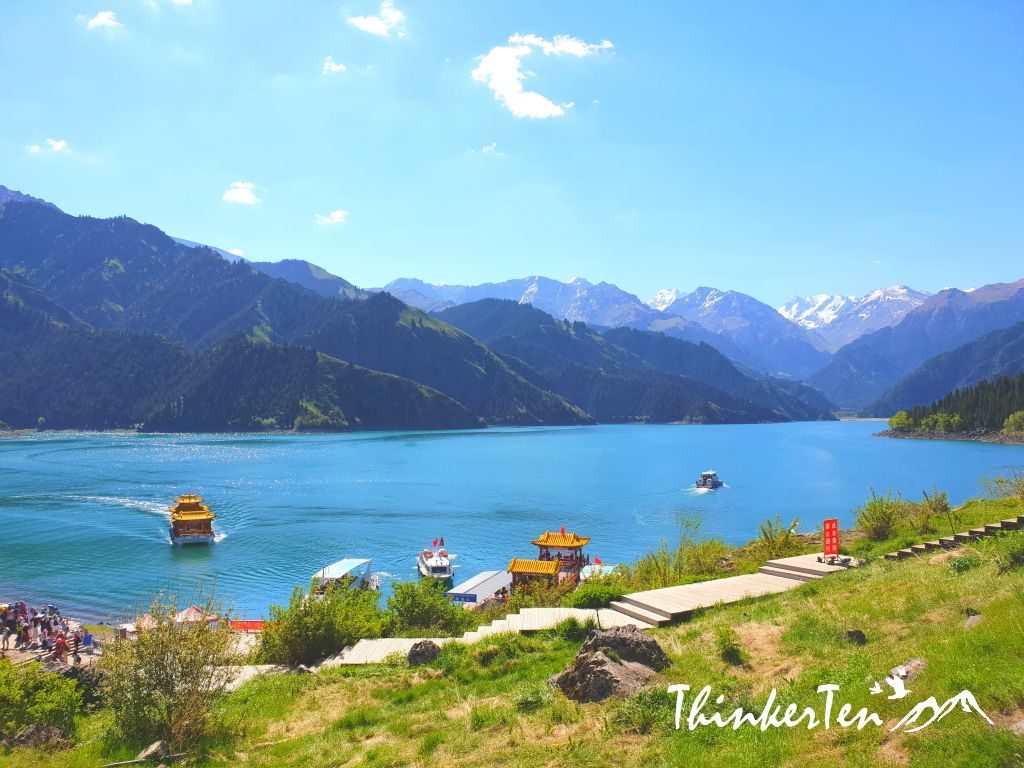 I was pretty surprised to see alpine forests and lakes in Xinjiang as this land is mostly covered by desert.  To see such a view was pretty amazing! The weather here is so much cooler than Urumqi as we are in higher altitude. The lake actually at 2000m high. 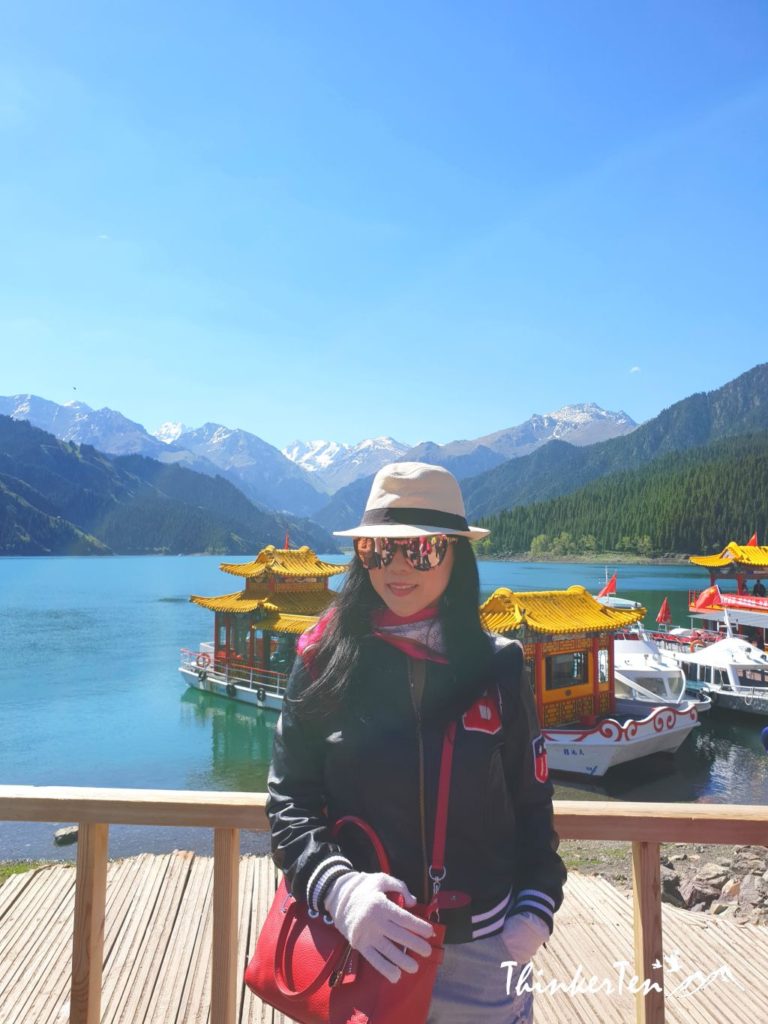 Summer is the best time to visit Heavenly Lake of Tianshan but then this place will be crowded with tourists.  Weather in the summer is very cooling provided if there is sunshine.  If there are clouds and rain, the natural park will be freezing cold. So always bring along a jacket even in summer as you never know when the weather changes suddenly.  And if there is rain, you may not see everything clearly due to fog.  Always check the weather before you make a trip up. 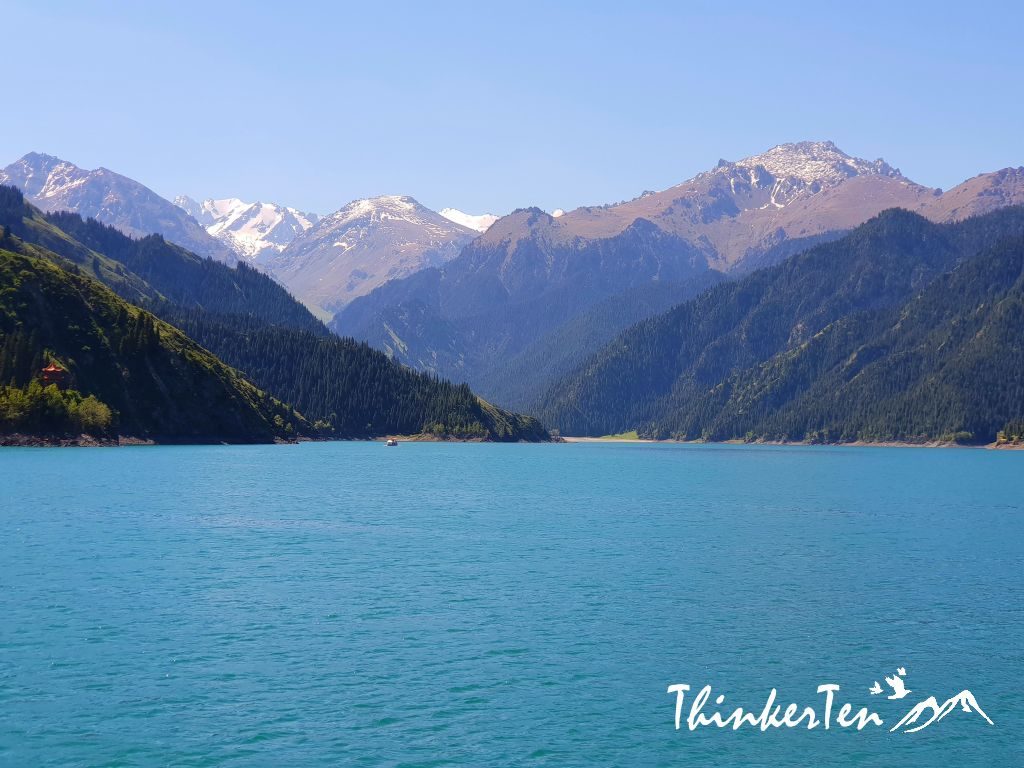 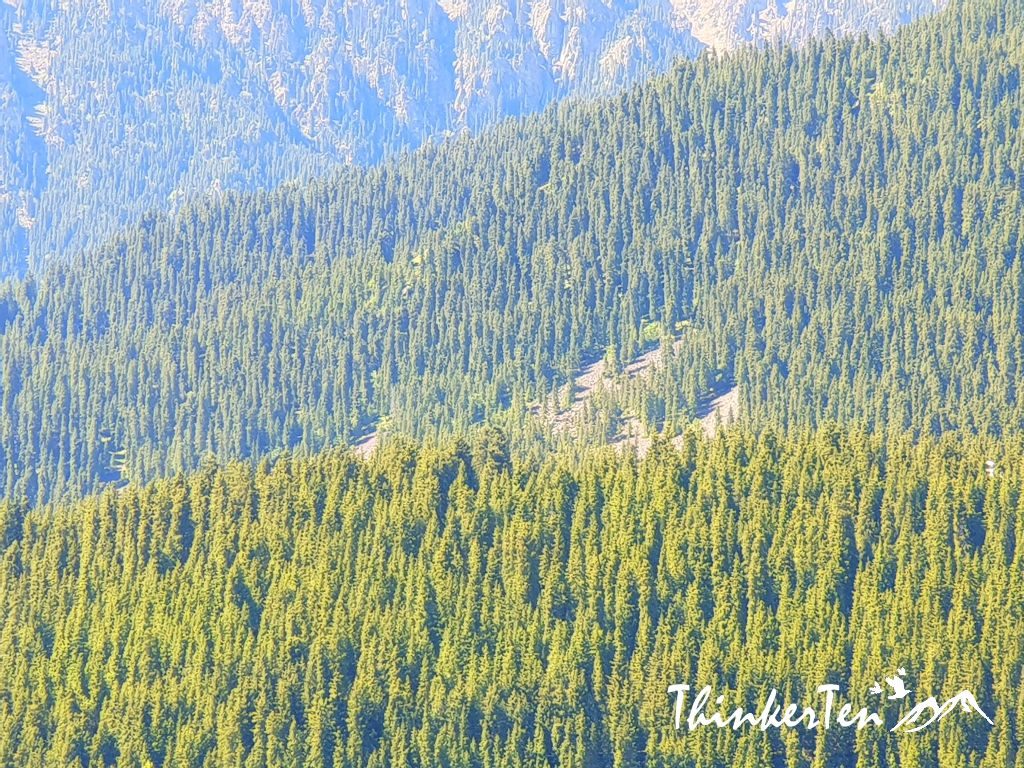 You can do a cruise at Tianchi lake and this is what we did. It was about an hour cruise along Tianchi lake. The water is crystal clear and clean, didn’t spot a single trash. What make it more beautiful is the lake is surrounded by alpine trees which look like UK Lake District. The layer of mountains from a far make you wonder if you are actually in Swiss Alps/Mount Titlis.

You may be lucky like us to board on a cruise with Kazakh’s dance performance. The Kazakh lady dance for about 15 mins on this little stage in the cruise.

The minority Kazakh people stay in Tianshan and Tianchi area. Most of them are nomads and live in yurts – a round tents similar to Mongolian tent. The yurts are portable and made up of woods and covered with skins. I spotted plenty of yurts in this mountain area.  Most of these yurts here are actually made for tourists and not really Kazakh’s home.  You can also stay overnight at the yurt here but there is not toilet inside the yurt. 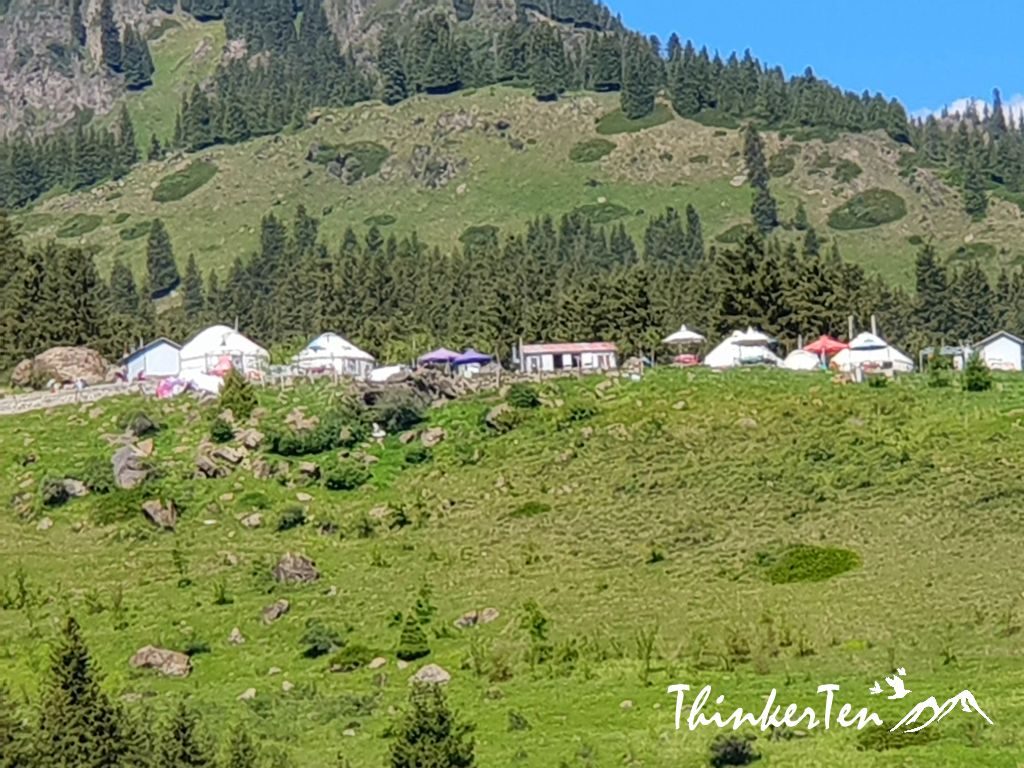 8. Hiking up the Temples and Pavilion

The cruise made a stop for those who like to do some hiking up the temples and small pavilion. 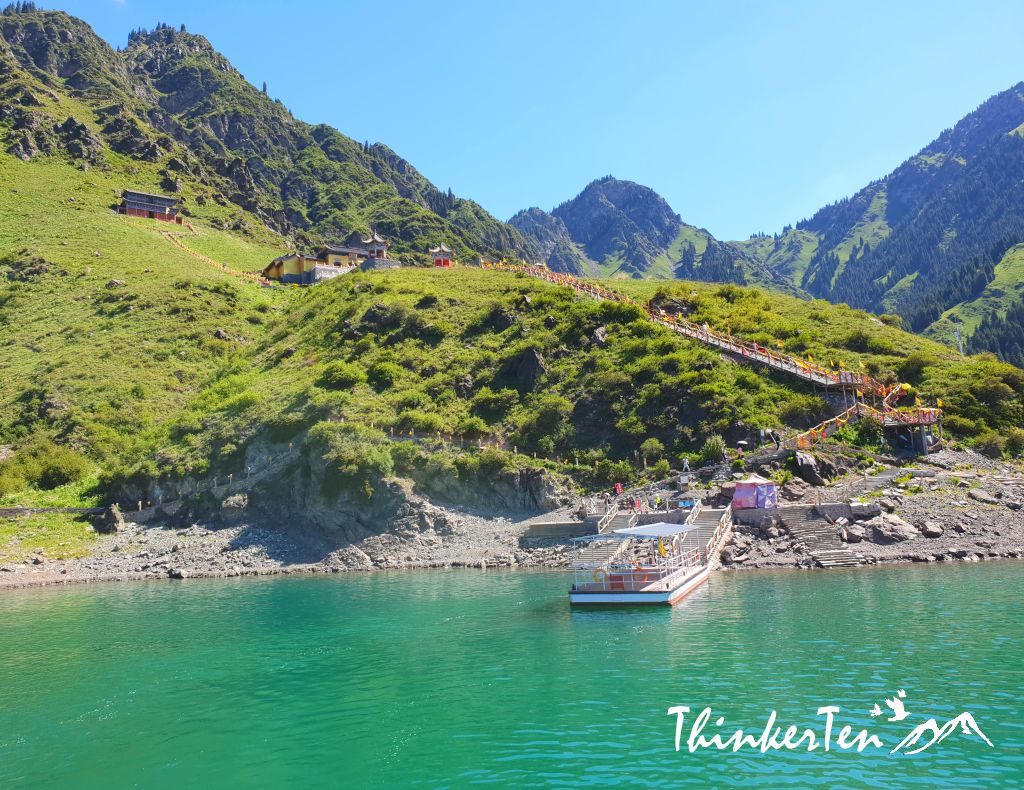 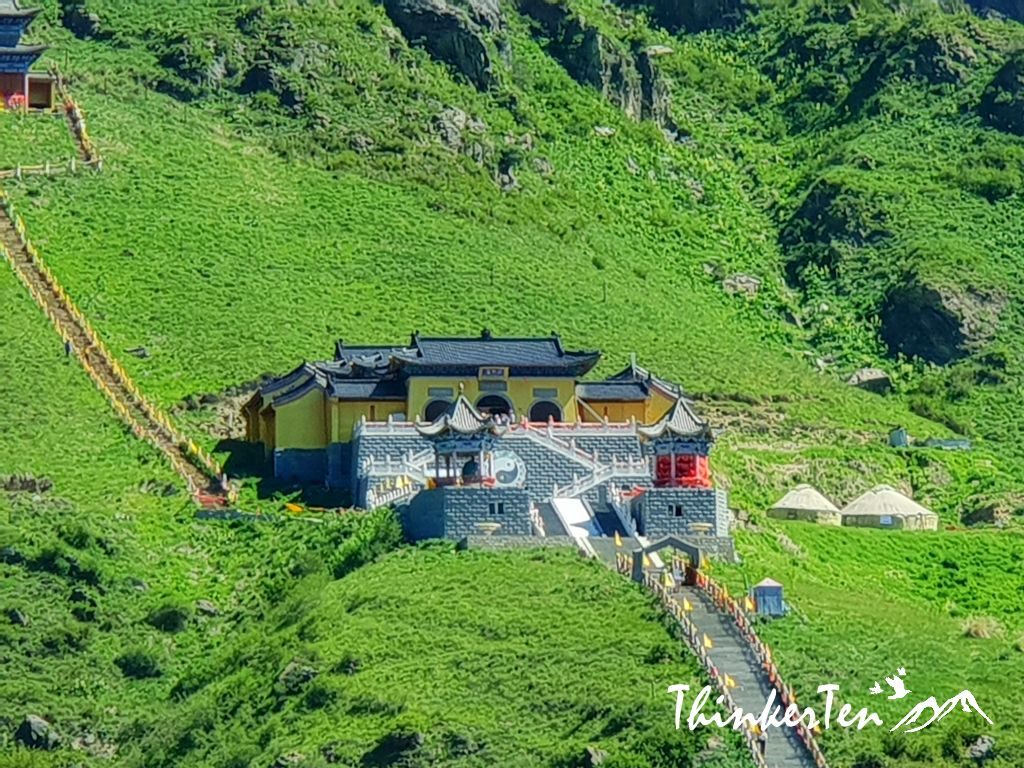 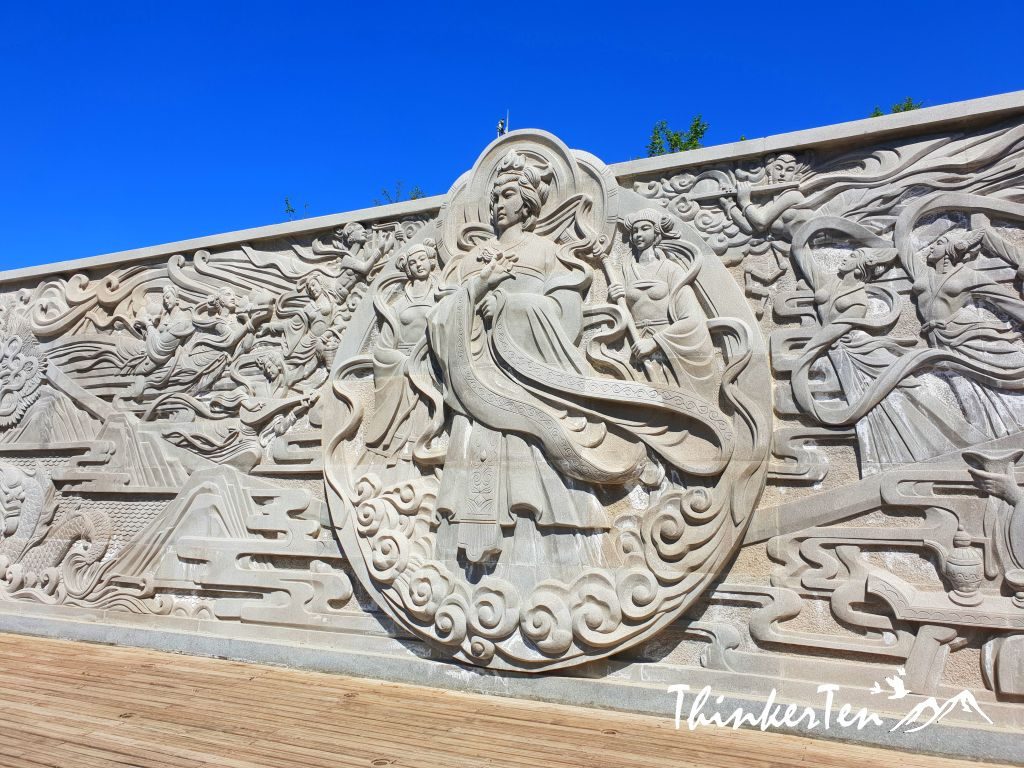 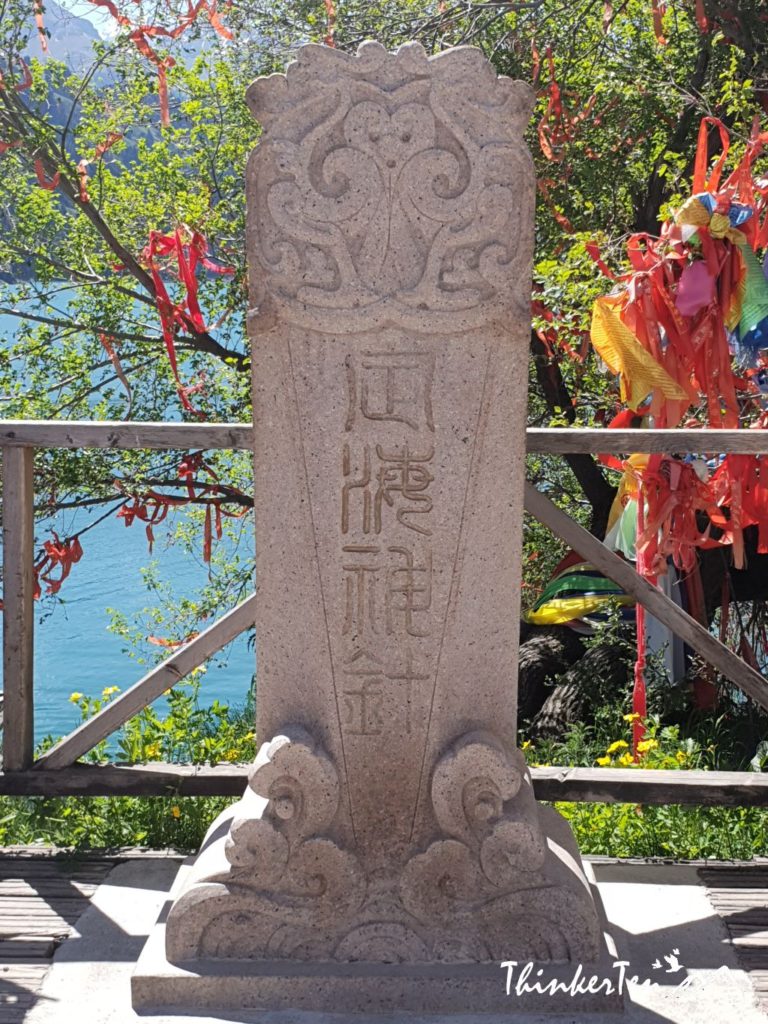 Next to the sea stabilizing needle is the ancient Elm tree which were being tied with plenty of red wishing ribbons.

Heavenly Lake in Tianshan is where Kazakh nomads live, you may want to rent a traditional Kazakh costume and shoot some picture. 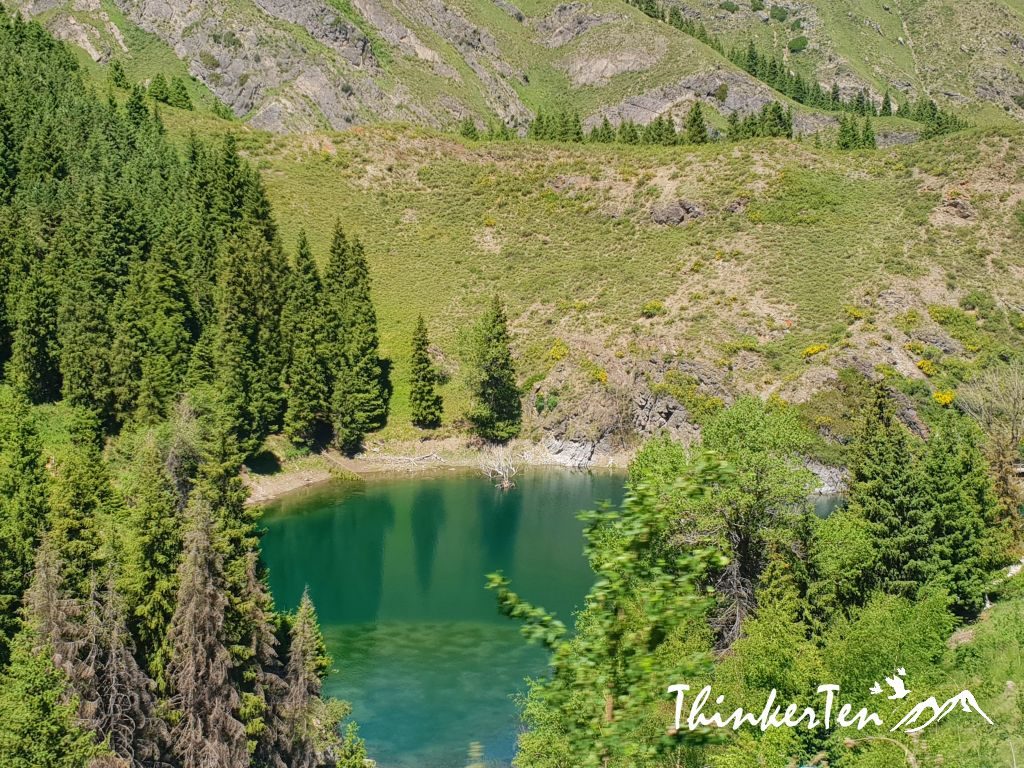 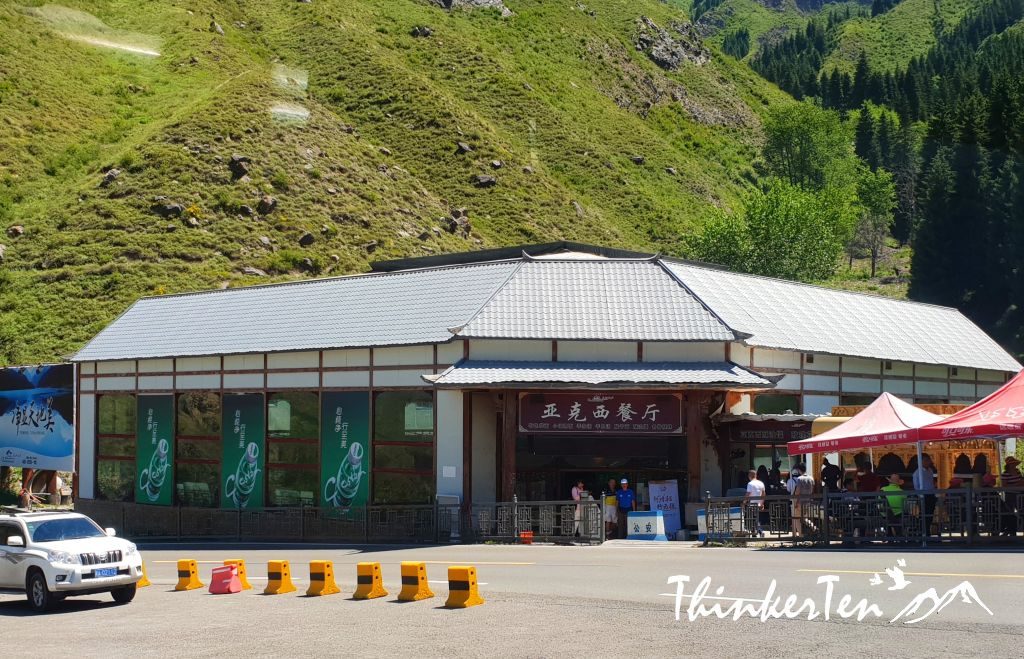 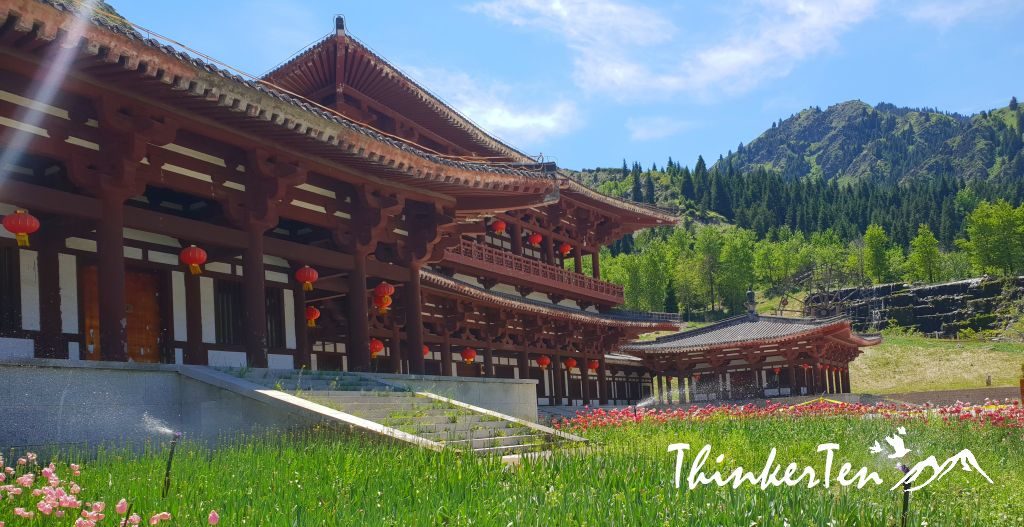 Heavenly Lake of Tianshan has an amazing scenery, the super calm lake is located at 2000 m high which never get flooded or dried up so far.  The snow-cape mountains in the background made me wonder if I was in Swiss Alps and the serene alpine lake made me think of Lake District in UK.  But the loud mainland Chinese troop of tourists made me realised I am in China. 🙂 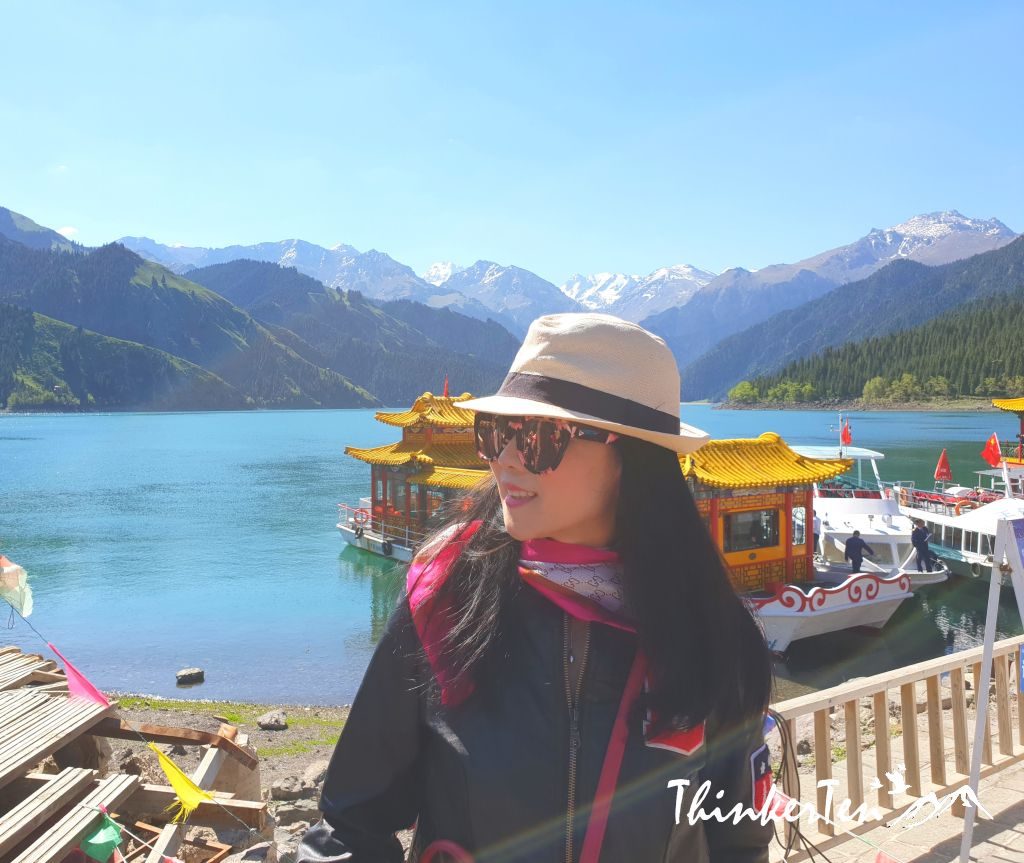 That’s an interesting post..I liked the pictures and the content is so good..you have shared AMAZING places to visit in china..

Tian Shan is north and west of the Taklamakan Desert; (the second largest moving desert in the world). It is also border to Kazakhstan and Kyrgzstan, so you see plenty of Kazakh’s yurt here too.

After that fire the lake post is soothing. I love water in any form so this one I loved.i am sharing it too.

Dear Queen,
Your comment made me laugh aloud! LOL. Yes, the lake here is called Tianchi, located at the Heavenly mountain in Xinjiang China. The color of the lake is crystal clear.

China is really an amazing place to visit most. I really admired this place, and those view might catch of attention of everyone.

China has so many nice places to visit and Xinjiang offer a total different experience, not only you could experience the minority such as Uyghurs and Kazakhs’ culture, you also get to enjoy the breath taking snow capped mountains, Tian Shan, Altay and Kunlun, you also get to see K2, the world’s second tallest mountain from Xinjiang.

Dear Preet,
There are parts of China that are booming with economic growth such as Shanghai & Beijing. High rises skyscrappers everywhere. But this part of China, Xinjiang is has a total different lanscape. It is better to visit China now before it gets too expensive.

Oh my wow that’s gorgeous! Above and beyond GORGEOUS! I would love to go there!

Dear Gigi,
The Tianshan Mountains in Xinjiang Province are absolutely stunning. It was in summer when I was there but the top of the mountain is still covered with a thin layer of snow, which make a good backdrops. The combination of lakes and mountains make this place even more attractive. This is truly Heavenly Mountain!

the place looks promising! & wow the view is so breathtaking…

What beautiful pictures! That lake is very blue and those mountain scenery are so gorgeous!

I’ve never heard of this destination but it looks gorgeous! So green and blue!

People usually think of beautiful mountain in Swiss Alps and not knowing actually in Tianshan Xinjiang China, the view is as beautiful as Swiss Alps mountains. This is a hidden gem.

Wow! What a beautiful place. Looks like you had a great time! The cruise around Heavenly Lake sounds lovely.

You are right, one of the must do thing is to cruise around the Tianchi Lake, it offer breath taking view, better the UK Lake District. You got to see the green crystal clear water and the pine trees and layer of snowcapped mountains. And the bonus is you also see the white Kazakhs’ tents set up in the forest which made such a pictureque landscape.

Wow! It really beautiful, this is definitely a must visit place to explore and make a lot of wonderful adventures.

wow! those are some beautiful views!

Everything looks so peaceful at Xinjiang Heavenly Lake of Tianshan. The lake and mountains seem like they create a place where you can go and forget about the world around you. I would probably rent a costume. I would want to totally emerge myself in the culture.

The minority that occupied Tianshan is Kazakh people, also Turkic ethnic group. They are nomadic people who lives in their white portable tent called yurt, similar to Mongolian tent. They are good in horse riding and their costume are pretty colorful.

Wow, what a great culture to explore! I love the suggestions you’ve made here!

What a beautiful place! I really love all of the bright colors, and the green foliage as well! Looks like a wonderful place to visit!

The Heavenly lake located in 2000 meter high of Heavenly Mountain is truly a pictureque place, great for photography lovers.

Never been in this place but it looks like a nice place to visit with your friends or families.

Dear Geraline,
This part of China is truly Heaven on earth, the mountain is also called Heavenly mountain.

Wow what great pictures you took. Everything looks so colourful and naturally beautiful. I bet it was a great sight to see for real.

China looks like an amazing place to visit, one day I hope to see it for myself!

This is the first time that I heard this place looks so beautiful and I love taking pictures.

What an exquisite part of China that I am unfamiliar with. This looks like a stunning place and one that should be added on everyone to do list.

Incredible! I could have mistaken this place with Europe if you didn’t mention where this was located. The security situation almost sounds intimidating, but I see through your pictures that it was worth it!

Dear Chana,
If you asked me how safe is Xinjiang. It is pretty safe, thanks to the tight security. Don’t get intimidated by the police officers walking around with big machines guns and weapon. They are there to protect us. Ignore them and don’t try to take pictures of them as they will confiscate your camera or phone if they catch you doing so. Have your passport with you all the time as you will face frequent checks from the police officers in Xinjiang, you will go through plenty of metal detectors in supermarkets, restaurants and even public toilets. And the people in Xinjiang are very friendly especially the minority groups, such as the Uyghur and Kazakh. The media has made Xinjiang look scary. To be able to experience myself and see it with my own eyes, made me not trusting too much on the news and media. And yes, China do have the European scenery and as beautiful but then cheaper to visit too.

These landscapes are simply breathtaking . I can imagine being at total peace in the countryside . I hope I can afford to travel there one day .

The scenery is breathtaking! You look stunning in these shots! Beautiful review and amazing pictures!!

so pretty! I stayed in a yurt in Mongolia and it indeed looked very much like that!

Dear Janna,
Glad that you have tried the yurt in Mongolia. It is pretty much the same except there is no window for the Kazakh yurt compared to the Mongolian Yurt. The opening for the Kazakh yurt is at the top instead of the side window. What an experienced you had, simply awesome!

Oh my goodness those pictures are gorgeous. I had no idea China had such scenic treasures. I’ve added Heavenly Lake to my travel bucket list. 🙂

Many people did not know China actually has the European Scenery too. 🙂

We haven’t been to China in years. Your pictures are fantastic, and make us want to plan a trip there soon.

China is on the top of our bucket list!