We left Urumqi early in the morning, went Tian Shan first then move into Gurbantunggut Desert, also the second largest desert in China after Taklimakan Desert. Then stopped by Dahuangshan Expressway a little and shoot pictures of Fire Mountain.

The Fire Mountain is located on the Gobi Desert in the Karamay Nature Reserve.  At the first look, the land is as if just been burn, the color is brownish red. 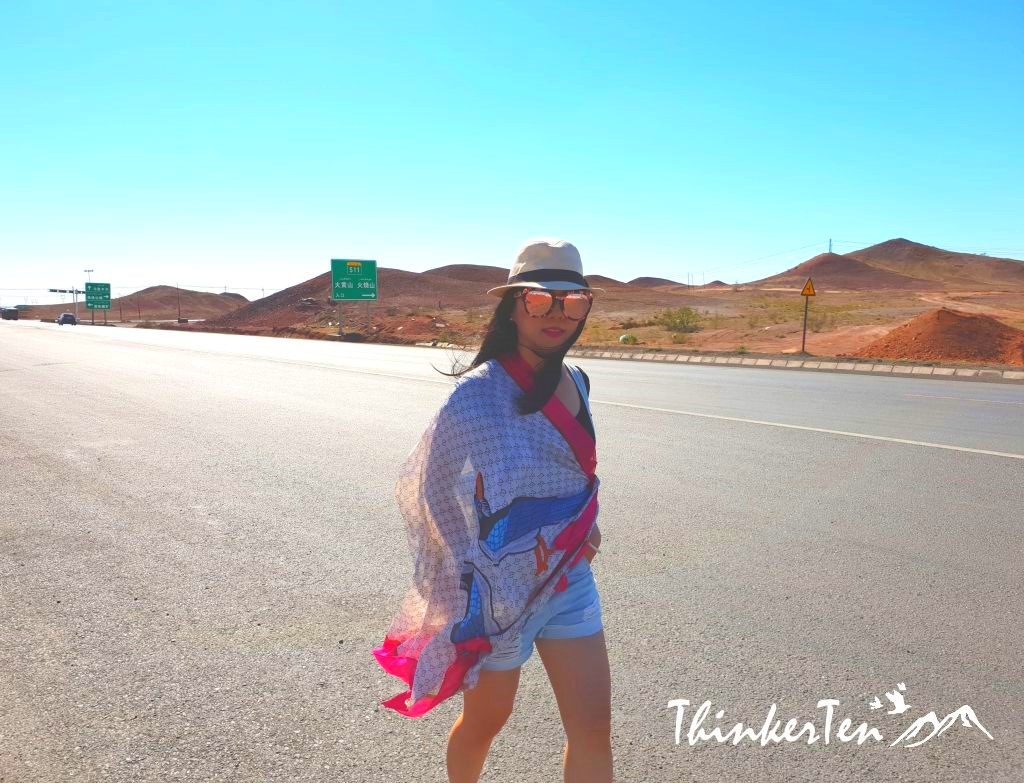 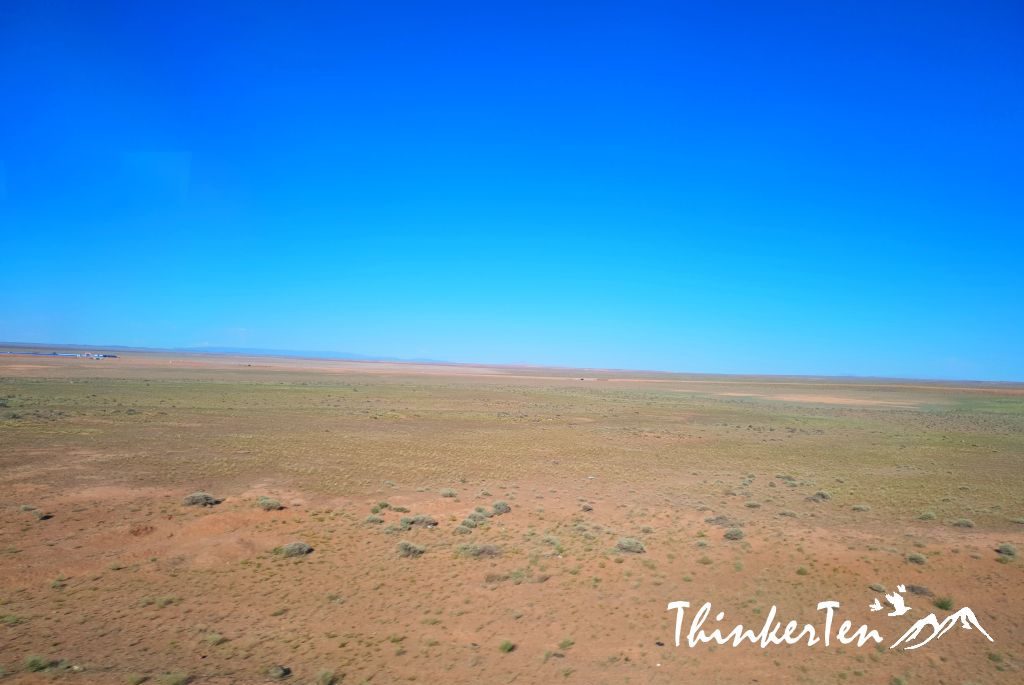 Opposite of where we stopped is the coal factory.  Glad to have spotted one of huge coal factory during my trip in Xinjiang.  Xinjiang contains more than 150 billion tonnes of resources, making it one of China’s largest under-developed coal provinces. 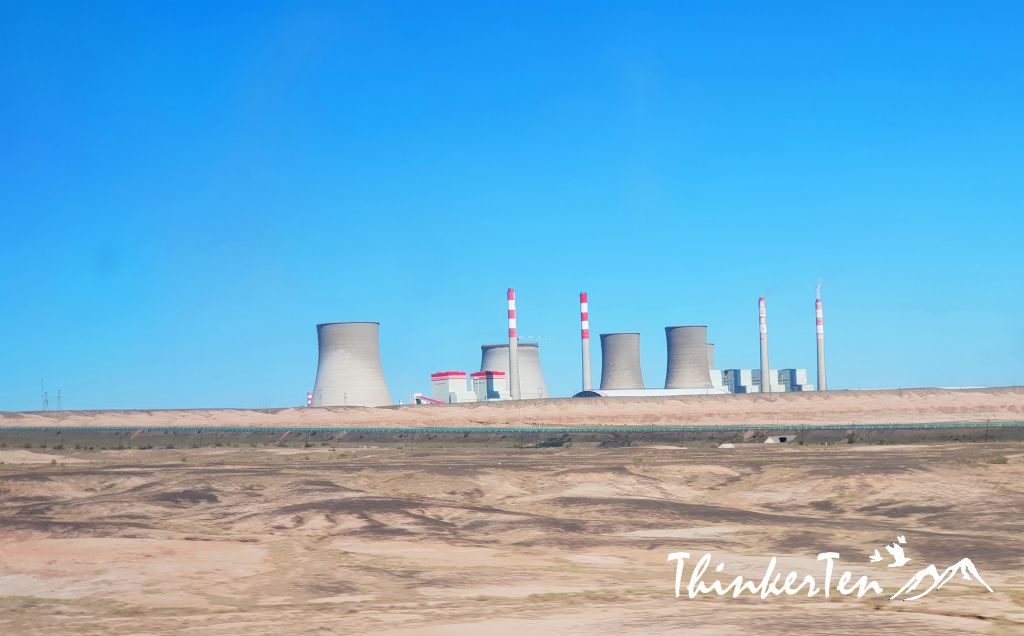 The biggest feature of Fire Mountain

The biggest feature of Fire Mountain is that many small hills are composed of red and orange rocks. The color is bright and the texture is hard. The entire hilly area is reddish especially under the hot sun.

Why it is so red?

The rock of Fire Mountain is actually not red, it is baked into red due to the combustion of the underlying coal seam. The rocks here are all bare and almost no green if you look around, quite a unique landform for tourist attraction.

We did not really walk into the Fire Mountain but just had a brief stop.  Took few pictures across the street.  Opposite of the Fire Mountain is the coal factory.  Glad I have seen one of the coal factories as Xinjiang is famous for its natural resources. There are about 122 minerals that have been discovered in Xinjiang, the biggest province in China, also one of the richest. 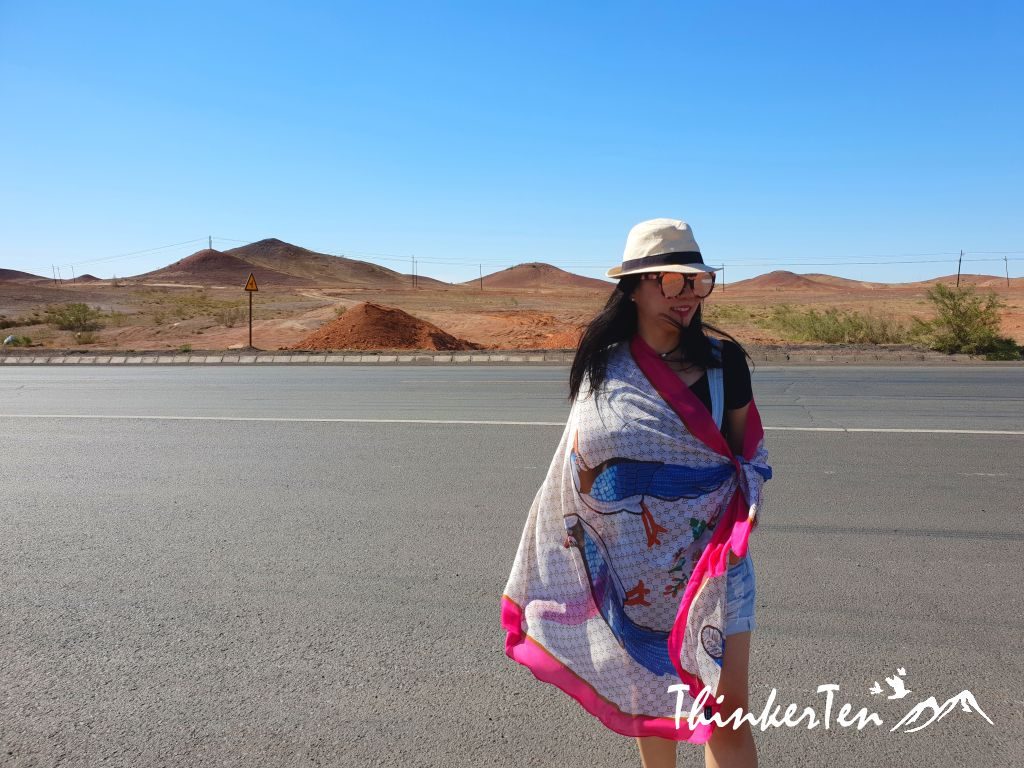 Another lovely post from you. Fore mountain pictures are great. And you look lovely

Dear Monidi,
Thanks for your comment. The scarf I used is to block away the hot sun as the weather is really hot in Xinjiang during summer.

those veiws! I can’t get my eyes off your images – so beautiful!

I’ve never heard of Fire Mountain. So cool! I love that it’s called Fire Mountain with it being so red. I would have def confused if with Flaming Mountain so thanks for the clarification.

I have been to China but not in Xinjiang region. After reading your pictorial post I am excited to visit this part.

Dear Indu,
Xinjiang is very different from other part of China as this part is one of China best kept secrets. Many of its people’s faces look like faces you see in Central Asia and the food also similar to Turkish.

This such a cool story! I loved learning how it got to look so red.

If you didn’t tell me this was China I would’ve never guessed it!

your photos tell a story on their own. I enjoyed reading your post and finding out about the weather over there.

Dear Marianne,
Xinjiang’s climate is one of extremes. Expect very cold and very hot. April till early May is not a good time to visit due to frequent sandstorms and cloudy sky which disturb the beautiful view of landscape. Late May to mid of November is the best time and Sept would be the peak due to the changes of colors in the woods and also the best season but super crowded with their local tourists. You may not be able to take a decent photos.

That looks like a fun trip and beautiful views. LOVE all that you can see when traveling!

I LOVE the colors of the earth there! And I had no idea how many minerals had been discovered in China! Great post!

Dear Kristen,
The three large mountains in Xinjiang, Altay, Tianshan and Kunlun are all mountains of treasures and abundant in gold, jewels and precious metals. For example, the Altay Mountain in the north means place producing gold. Besides that, Xinjiang has good mineralization conditions, mainly include petroleum, natural gas, coal, copper, nickel, lead, zinc,etc. So you know Xinjiang province is so precious for China and has to be guarded strictly as Xinjiang is also borders with 8 countries, Mongolia, Russia, Kazakhstan, Kyrgystan, Tajikistan, Afghanistan, Pakistan and India.

This is such a great post. I didn’t know places like this were in China, I thought it was just city buildings, skyscrapers and awesome sculptures/statues. Thanks for sharing!

Dear Michelle,
China is huge and has 34 provinces which include 4 city district also the skyscrappers you mentioned were – Beijing, Tianjin, Shanghai & Chongqing. And 5 autonomous regions (Guangxi, Inner Mongolia, Tibet, Ningxia and Xinjiang). Xinjiang is the largest provinces in China and larger than any one European country but not Russia which give you so much to explore.

This looks like it would be quite the adventure. I would love to go and travel there some day.

I would love to visit Red Fire Mountain soon! I hope I can get there before the year ends.

Sounds like that land holds a lot of natural resources

Dear Erin,
One of the natural resources in Xinjiang is coal and I happened to passby a coal factory near Fire Mountain. Xinjiang’s coal resources are extraordinarily rich and account for more than 40 percent of China’s total coal reserve and rank the number one in the whole country. Really happy that I have seen one myself during my tour in Xinjiang. 🙂

Such a beautiful landscape! I love the colors of the mountains. What an amazing place to visit and explore.

Dear Mrs Tee,
The original rock of Fire Mountain is actually not red, it is baked into red due to the combustion of the underlying coal seam. And nearby Fire Mountain is the coal factory, this place is full of coal hidden underground 🙂

There are many gorgeous places in China and everyday one pops up. They are rich in natural resources and natural habitats.

The desert really looks stunning. Perfect for pictorials. It’s nice to know that minerals can be found in lands like this.

This part of the land in China is the one of the most precious land in China.
Xinjiang has three large mountains of Altay, Tianshan, and Kunlun and the two great basins of Junggar and Tarim and is said to be a place of “treasure on every mountain, oil in every basin”.

China through all your posts looks incredible and definitely somewhere I want to visit someday.

China is a destination where you can discover a country that’s hugely different from your own. It is exotic and full of new sights and experience. And this province that I visited – Xinjiang is totally different from other part of China.

I was just thinking I want to go visit some red rock canyons/areas, but I’m not sure if this is what I had in mind. It is pretty though!

Huashaoshan is part of our journey to the Heavenly Mountain/Tianshan. We stopped by to check out the unusual landscape which has very red rocks on the ground. Also have a good look at the nearby coal factory.

Looks like a wonderful destination for a family getaway! China doesn’t run out of beautiful places for tourists to check out.

Great read, did you take some of the rubble home with you? I’d collect it in a jar and put a label on it haha

Dear Chris,
What a great idea. Too bad, I forgotten to do so. Hopefully I will for my next travel.

This is a very educational read. I truly enjoy learning about places I never even knew existed!

Thanks for your comment. There are just too many things to discover in this vast land of Xinjiang and one month is still not enough to explore.

A coal factory seems like a strange place to visit, glad you enjoyed it though!

Interesting about the 122 minerals disvovered. It seems like a cool and different place to visit.

What a unique landscape. I can’t say I even thought I would want to see a coal factory but I find myself really wanting to visit there.

Looks like an amazing and beautiful place to visit. I love nature. Thanks for sharing