One of the top attraction to visit in Hiroshima is the floating shrine in Miyajima. It is a small island which can be reached by ferry, less than 20 mins from the mainland of Honshu. Miyajima Island is so important that it is now a Unesco World Heritage Site. The island icon is the red shrine gate or “torii gate” of Itsukushima-jinja which was built in the water. The scene of the “floating torii gate” is one of the unique views in Japan. 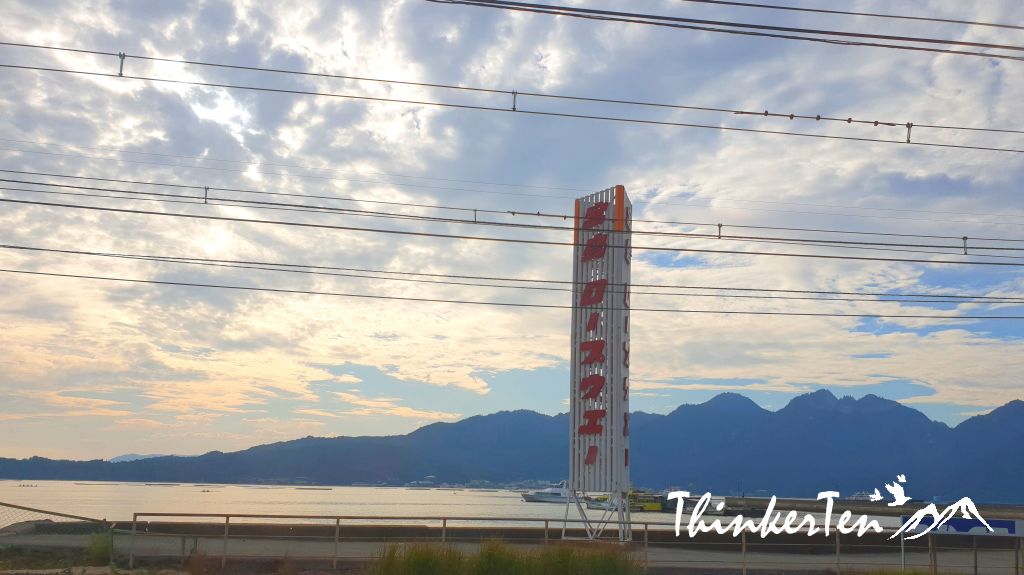 From Miyajimaguchi Station, it is about 3 mins walk. Just follow the crowd as most people are going to the ferry pier for Miyajima Island. There are two ferry companies operating here. JR and Matsudai. Both companies’ ferry rides take 10 min and both cost 180 yen (USD 1.60) one way. If you have the Japan rail pass, you can ride on the JR ferries.

We bought tickets for the JR ferry, it was easy to get on and off as the ferry is quite big. I saw tourists who travel with big luggage and bags and board on the ferry with no issue. Some prefer to stay overnight in Miyajima as there are some activities to do such as hiking in Mount Misen in Miyajima. When we board on the ferry, everyone rushes for the deck area and prefer to stand because the riding time is pretty short. Less than 20 mins. There is no need to find a seat, else you miss out the view of the iconic red floating torii gate which was built above the water when the ferry approaching the island. 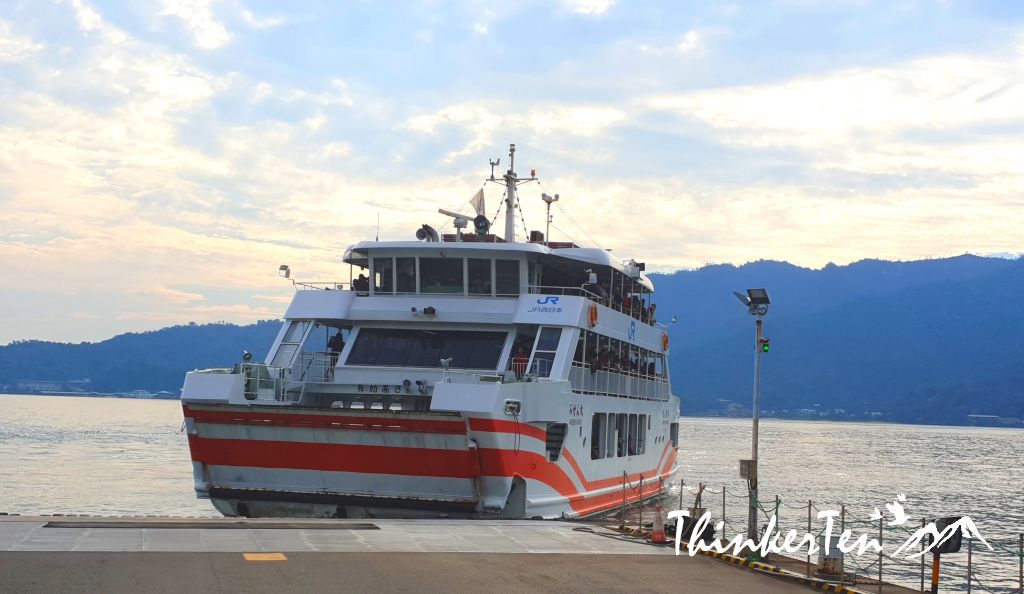 Before reaching Miyajima island the ferry will pass by countless of floating rafts and make you wonder what are these for.  These rafts are oyster farm as Miyajima is famous for their oysters.  When you arrive at Miyajima Island you find plenty of street food selling fresh oysters, bbq oysters and even restaurant would include their bento set with oyster fries or tempura style.  Miyajima top food to t

A closer look at the oyster farm.

Do not feed the deer in Miyajima

Less than 20 mins, we reached Miyajima and met some deers wondering around all over the island. There is more than a thousand sika dear on this island. Similar to the deer in Nara, the Miyajima deer were considered sacred messengers from the gods. However, there is one thing different – do not feed the deer in Miyajima. You also can’t touch and strictly no teasing. Please be very careful with your JR tickets too as hungry deer may eat them too.  If the JR ticket is being eaten, you need to purchase again for your return ride back to the main Honshu island.

My thoughts for Miyajima deers are, they aren’t as friendly as the deer in Nara Park and their eyes look fierce.  Be extra careful with those deers with big antlers as they might charge at you if they get moody. 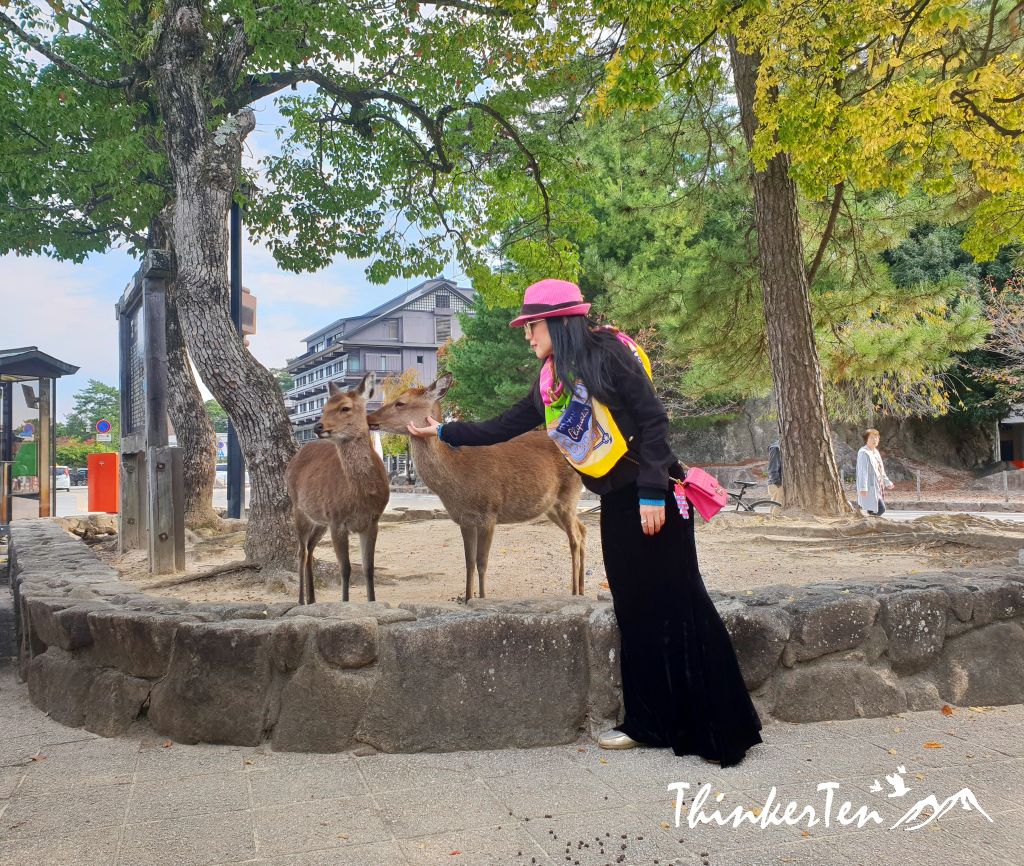 We spotted CHANEL is hosting a traditional Japanese theme beauty events in Miyajima Island with the red theme, red lantern motif with CC marks can be seen everywhere. 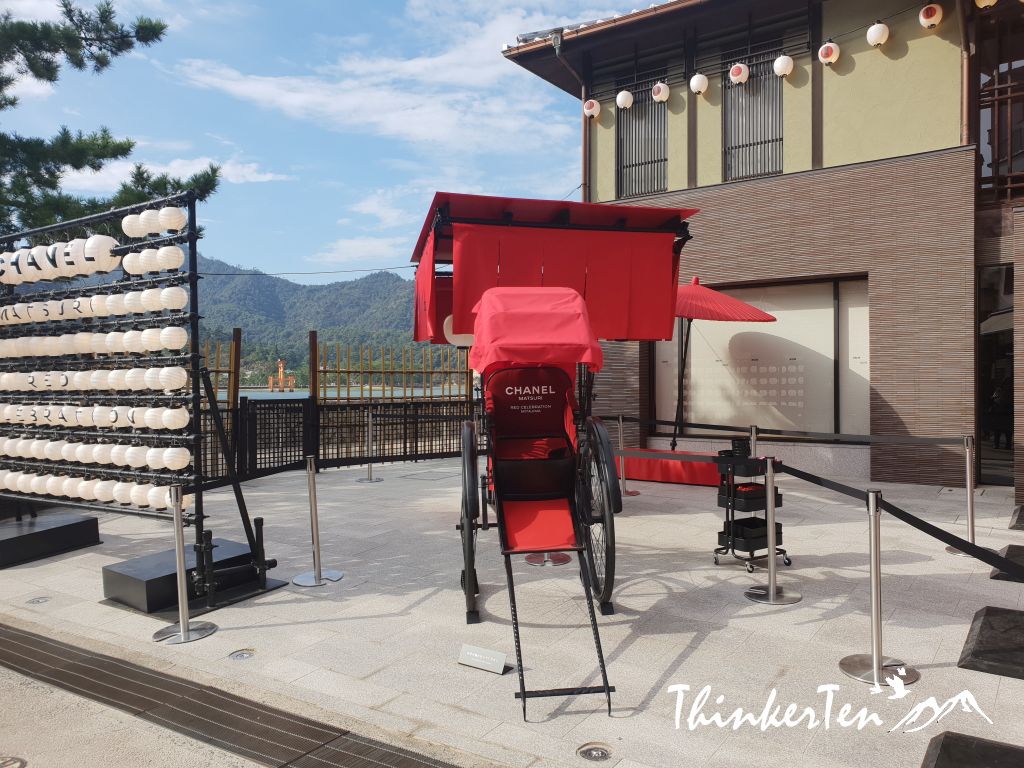 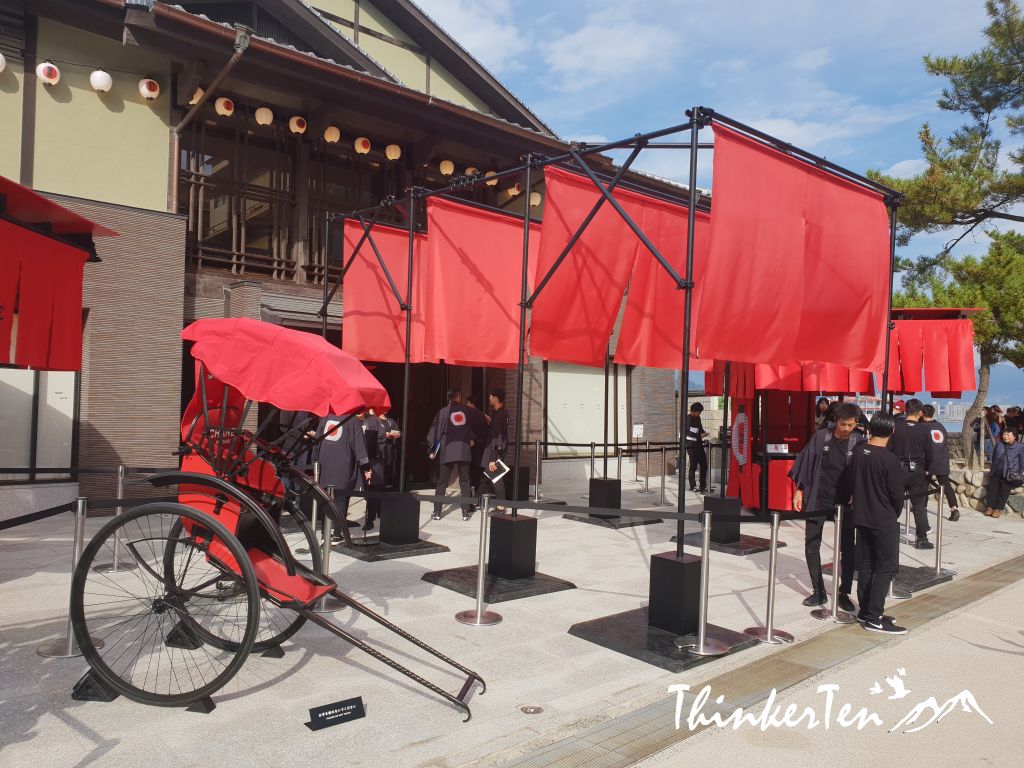 How to explore Miyajima Island?

Miyajima can be very big to stroll around but there are two important portions, the small town around Itsukushima Shrine and Mount Misen. The Itsukushima Shrine is only 10 mins walk from the ferry pier. The other sights such as the Grand Torii gate and Daiganji temple are located within walking distance from the shrine.

There are other attractions such as Miyajima Museum and Miyajima Aquarium. 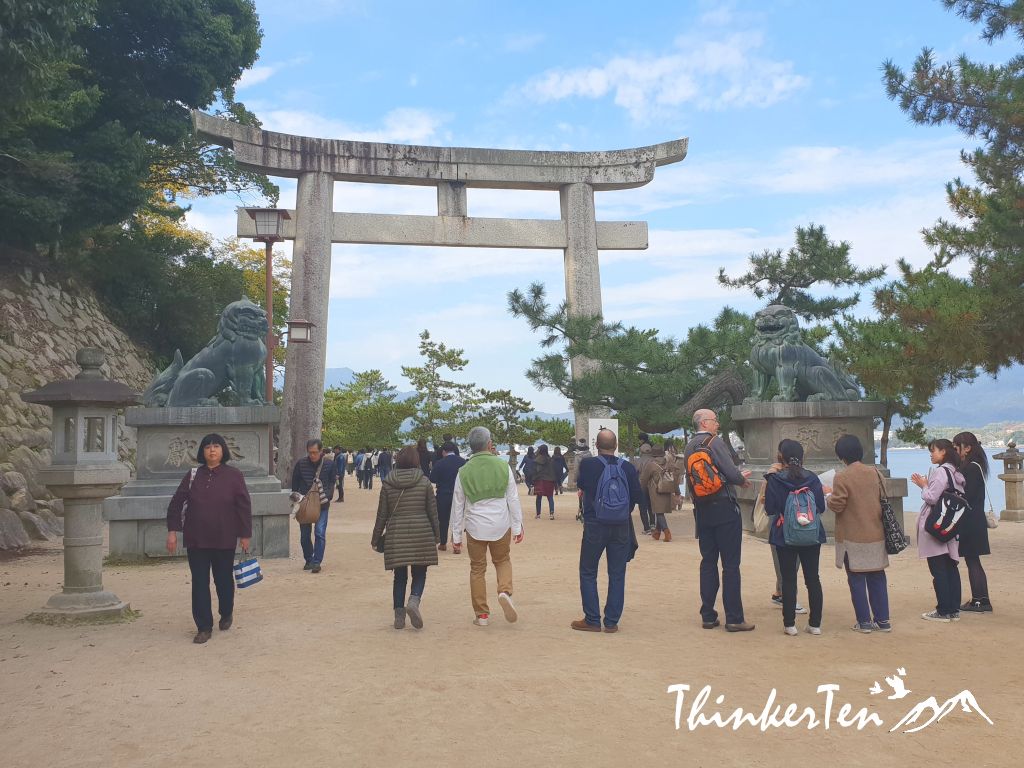 Japanese students on their arts excursion 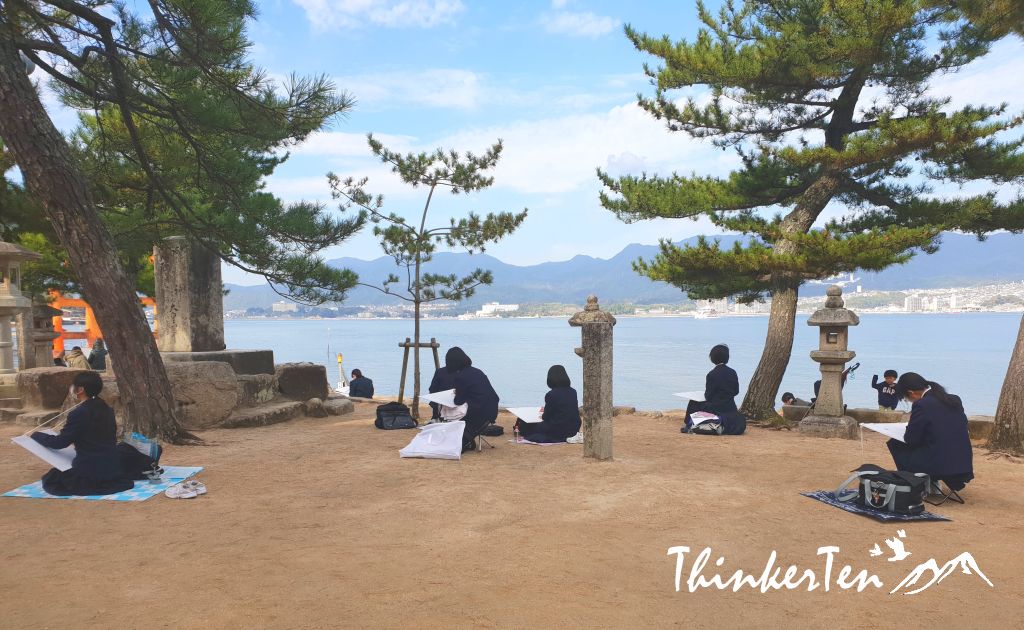 Wearing Mask is popular in Japan

When you travel to Japan, you will notice many Japanese has the habit of wearing mask and there are many reasons why masks are so popular in Japan, such as due to health issue, or do not want to get sick or due to Social anxiety.

Dogs are allowed to board on the ferry and visit Miyajima too.  Looks like the ferry is dog-friendly. 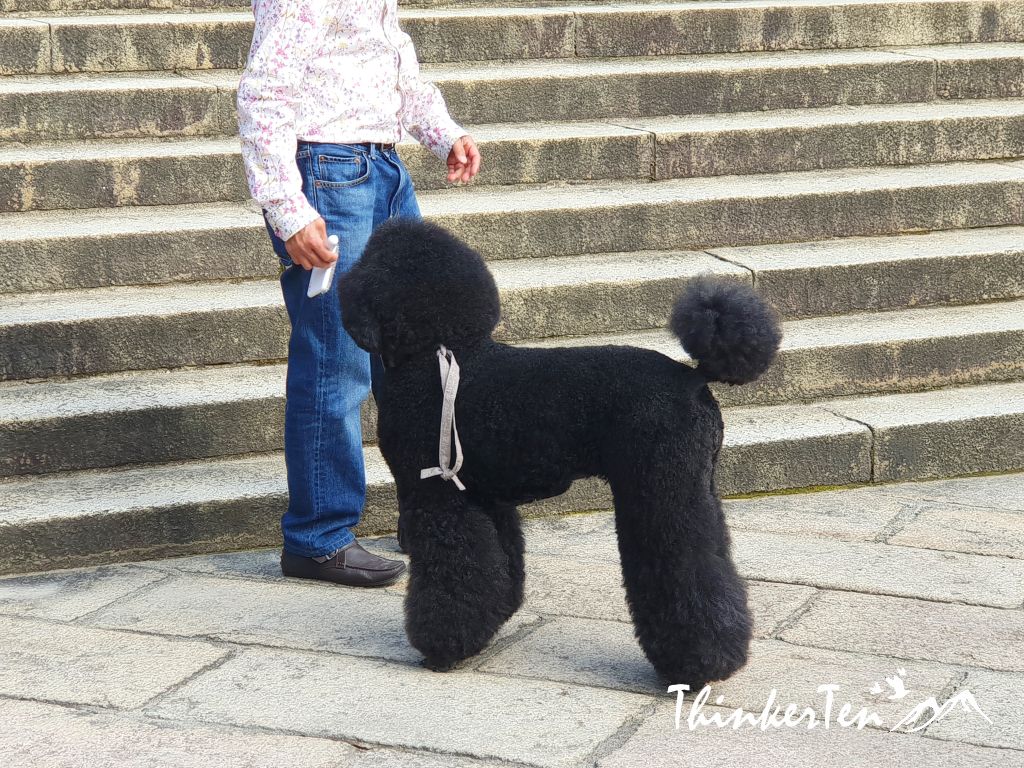 Itsukushima Shrine on Miyajima is another must-see, painted in red all over make it a very beautiful spot for photography. It is also a National Treasuer in Japan. Both the shrine and its torii gate are unique for being built over water, appeared to be floating in the sea during high tide. 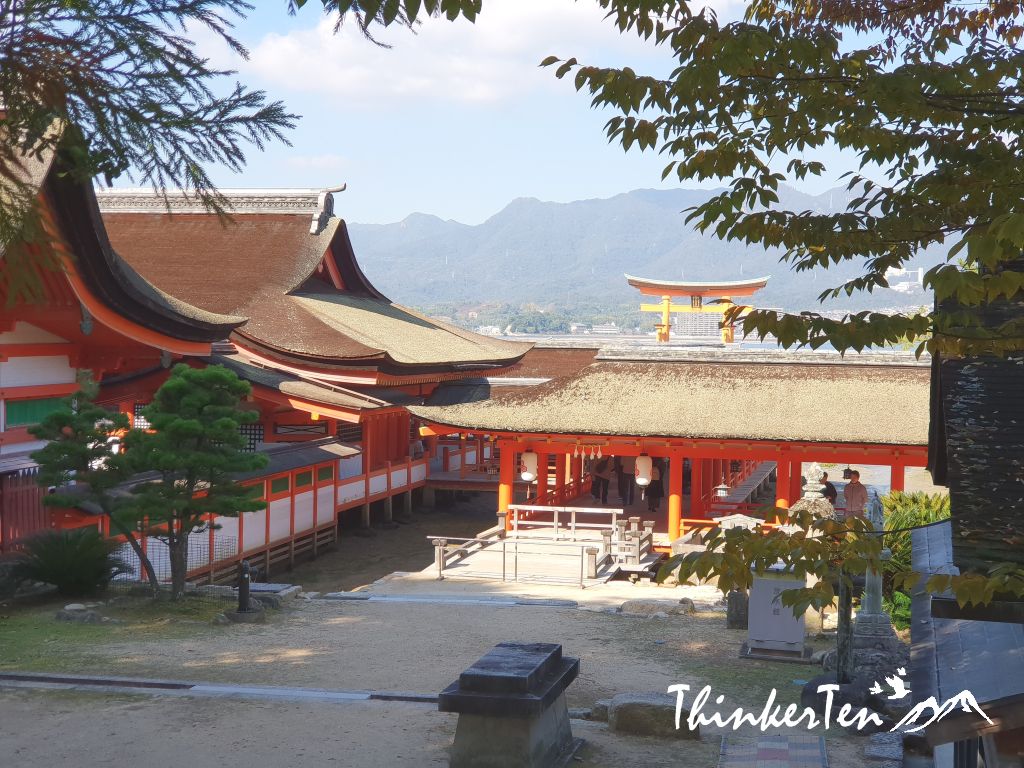 At high tide, the shrine is appeared to be floating in the water.

There is a huge Noh Theatre stage in the shrine complex that you should also look at.

Noh Play is a classical Japanese musical drama that has been performed since the 14th century. One of the famous Noh play would be the Tale of Genji or “Genji no monogatari”源氏物語. 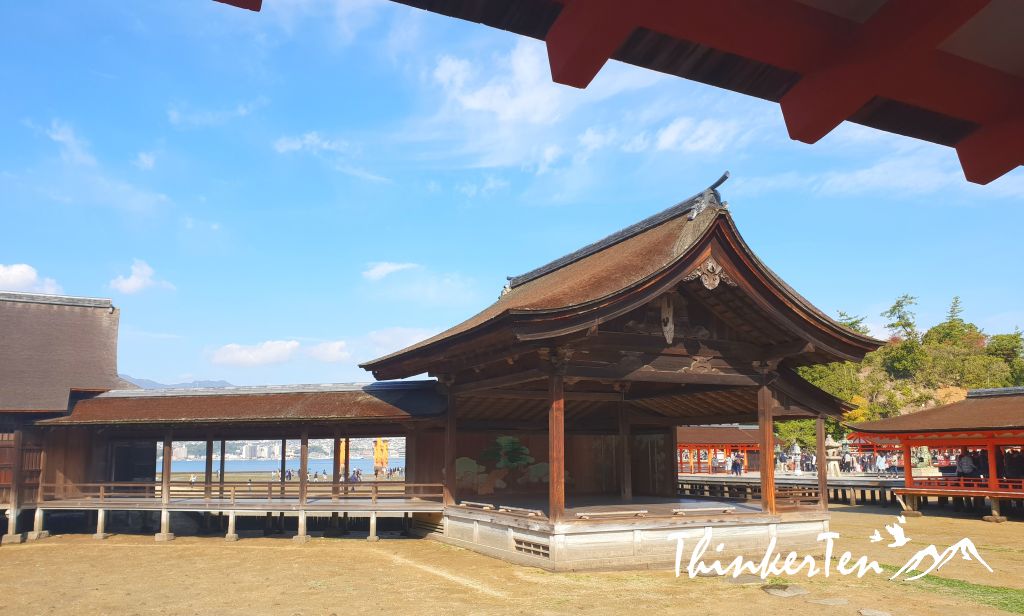 It was early autumn when I was in Itsukushima Shrine so spotted young children celebrate a tradition known as “Shichi-Go-San”. In this custom, you find children three or seven-year-old girls or five-year-old boys visit a shrine or temple to pray for a healthy growing up. It is a celebration to mark an important milestone in a child’s development. Children usually wearing their traditional kimono to pray and shoot family pictures at the shrines. “Shichi-Go-San” translate as 7-5-3, is a numeric number. 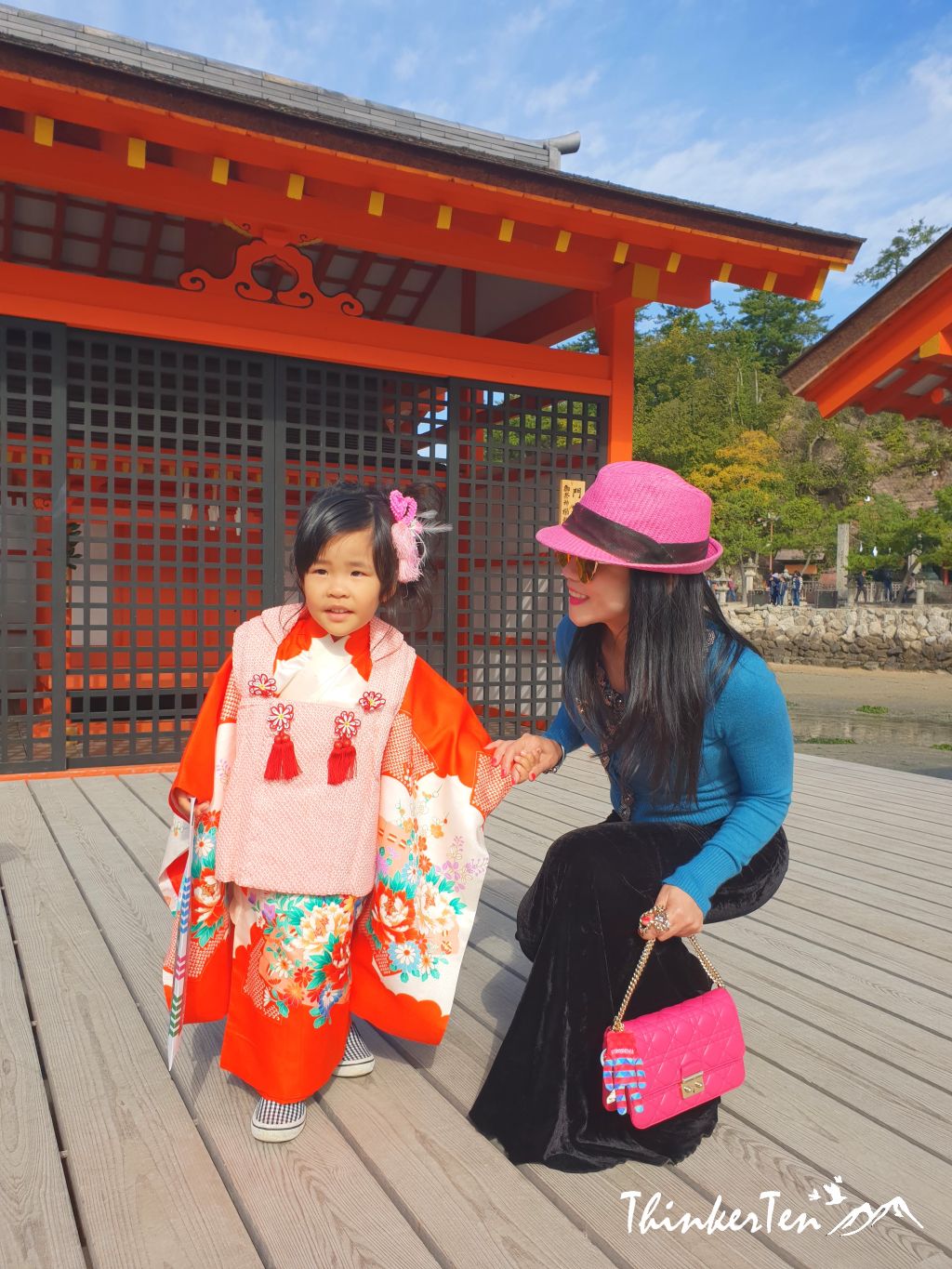 Another photogenic backdrop is the Five-story Pagoda (Gojunoto) which was constructed in 1407. The main deity enshrines here is the Buddha of Medicine. The pagoda was constructed in Japanese style with mixed of Chinese influence. It is not open to the public but makes really good photo opportunities. 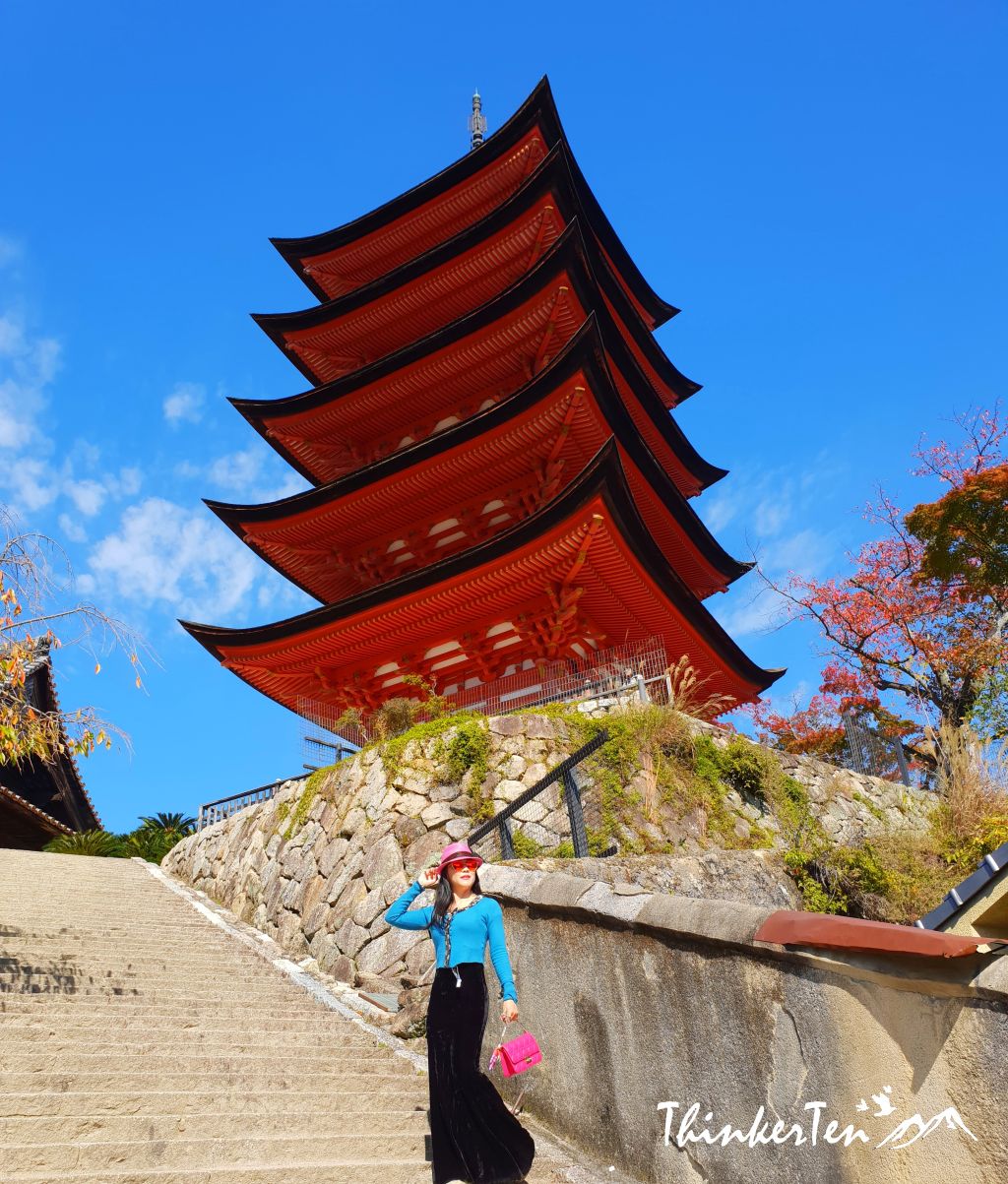 I do not have time to explore other attractions such as the Miyajima Museum, Miyajima Aquarium and Mount Misen in Miyajima.  If you have extra time, do go up to Mount Misen with the ropeway and so some hiking. 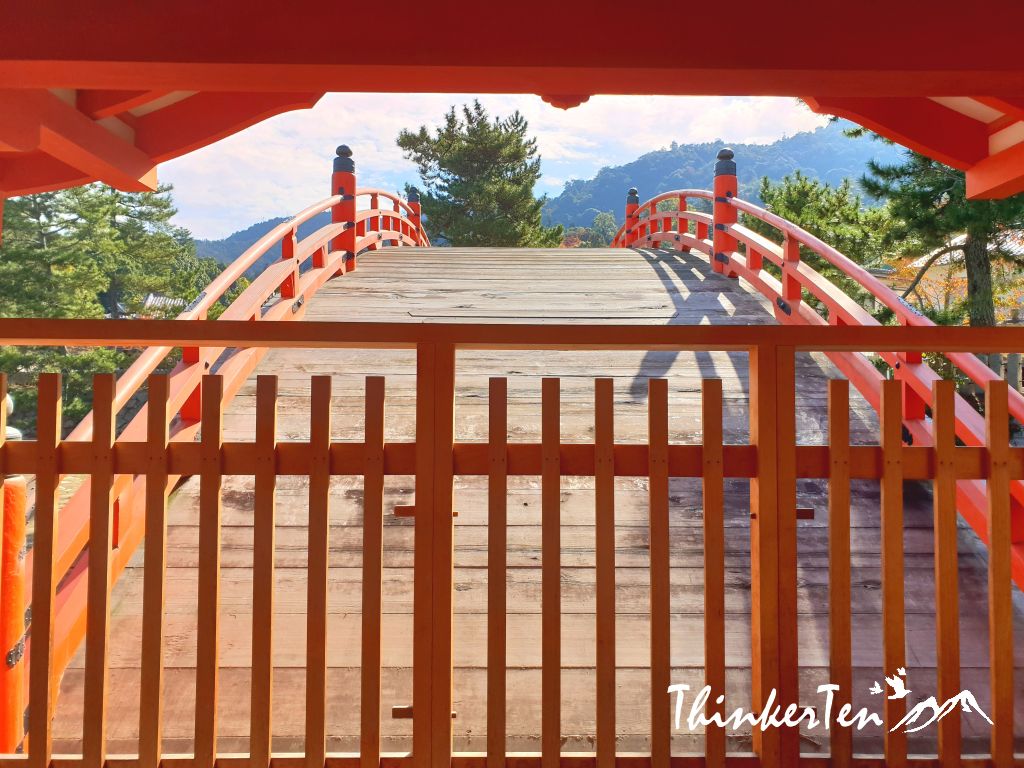 When you are walking in the shopping streets in Miyajima, you will discover countless shops selling Momiji Manju, a Japanese dessert. It was first created about 100 years ago by a female “Okami”/ boss who owned a Japanese ryokan/hotel. She wanted to make something special for this island so created Momiji Manju. Momiji is maple leave in Japanese so the dessert is made in maple leave shape. 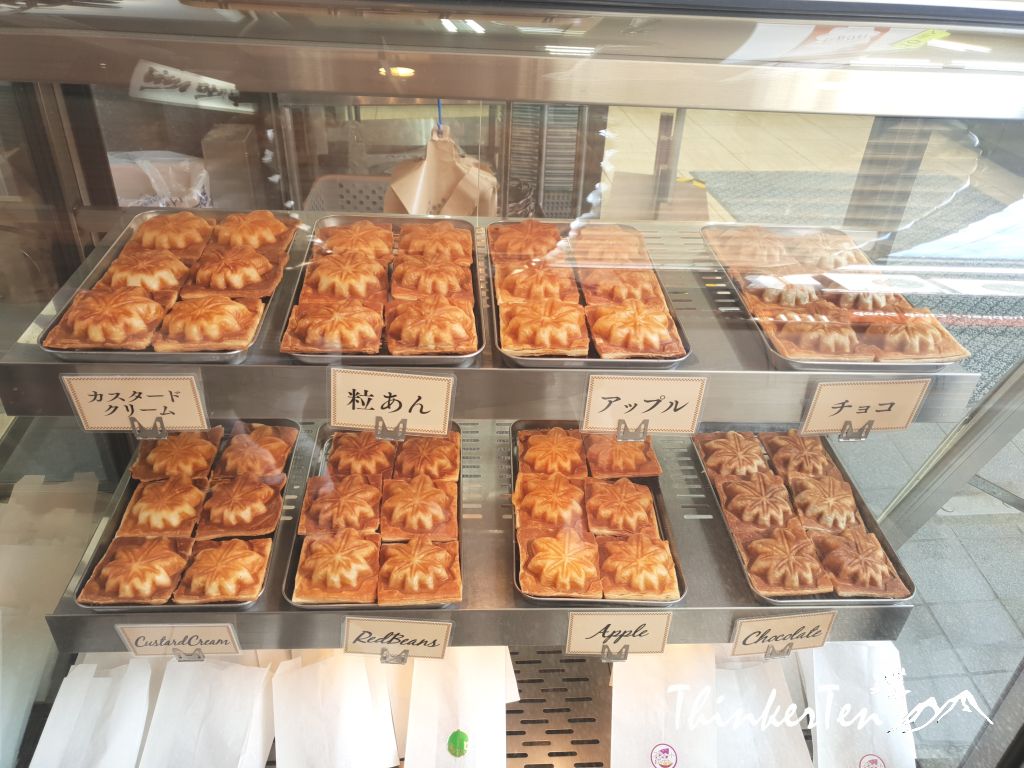 Nowadays, you find over 20 shops selling Momiji Manju in Miyaji and each has their specialties.  You should try out different flavor from each shop.  I still prefer the original taste of “anko”/red bean filling. 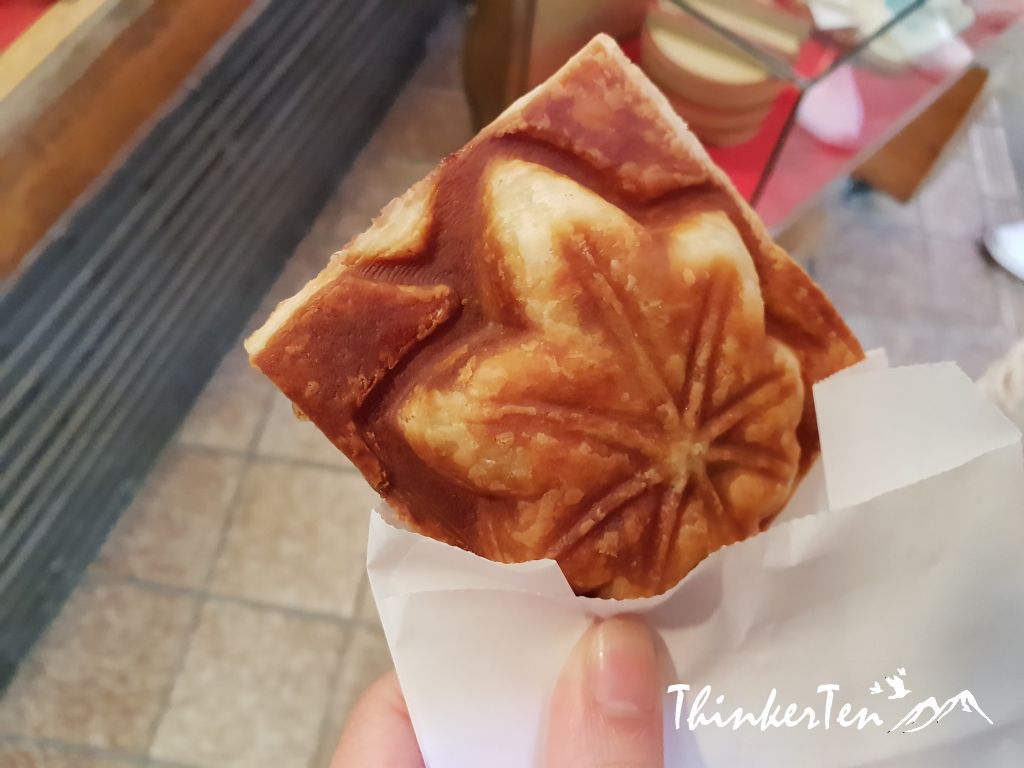 Kaki is Oyster, this is the place to taste as the fresh oysters.  The oysters produced in Miyajima have become a popular brand, well-known for their big size, tenderness and juiciness. 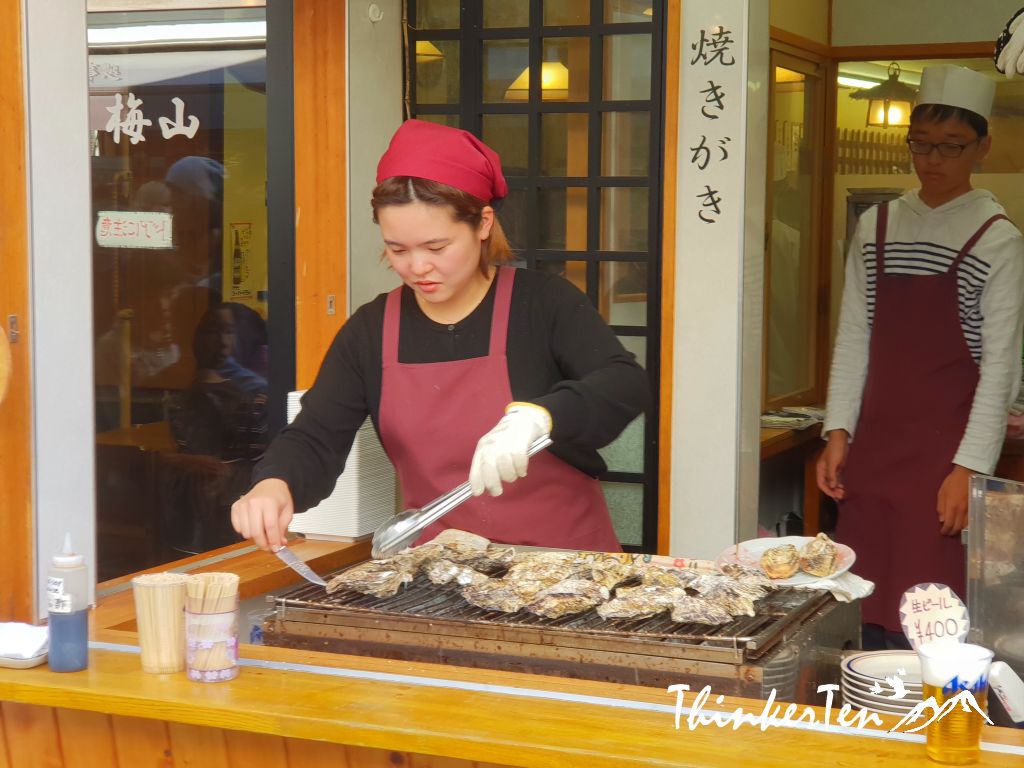 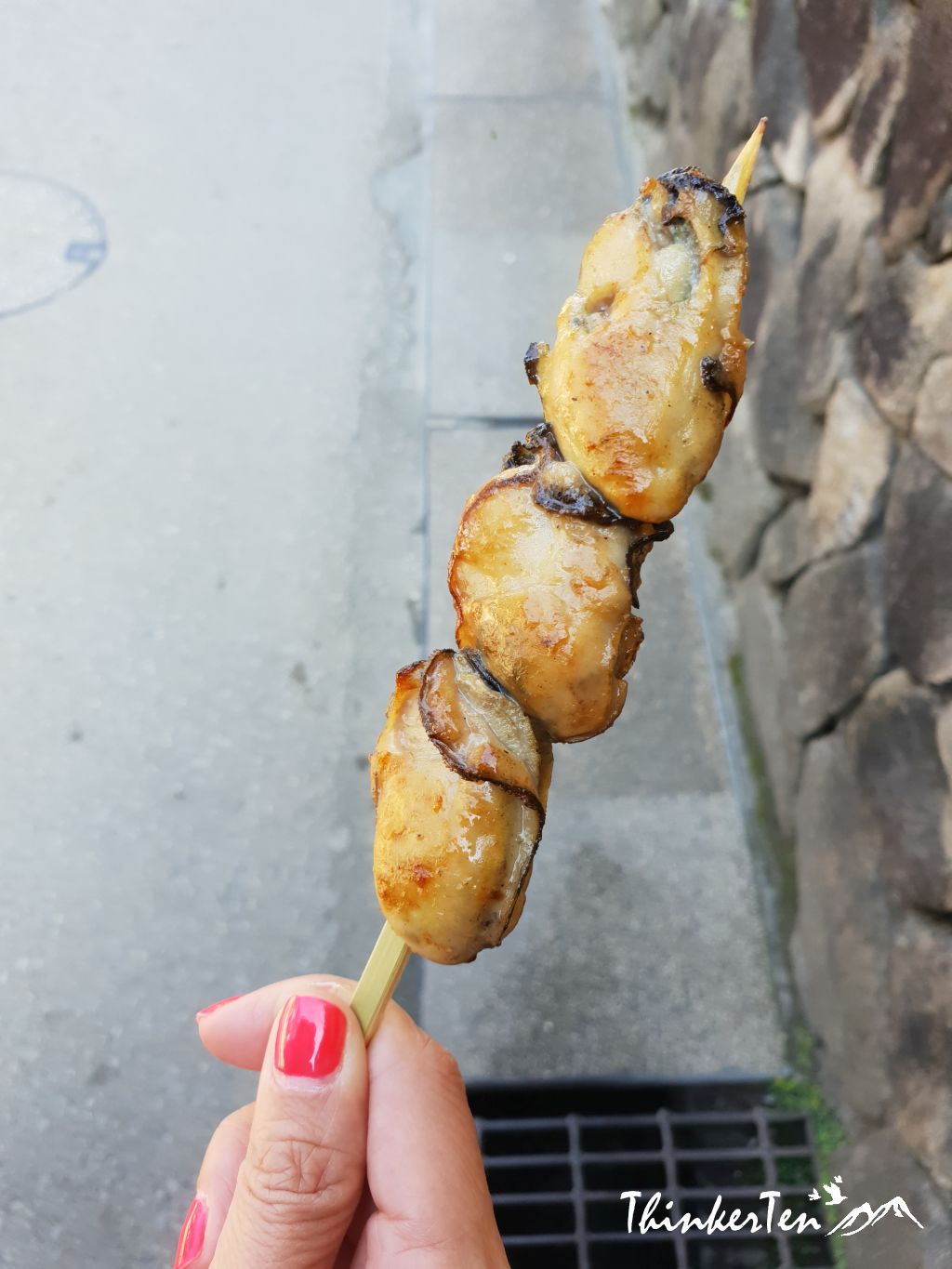 Like I mentioned earlier, many dishes here are prepared and served with oysters. We order Rice donburi with oysters covered with egg and onions. 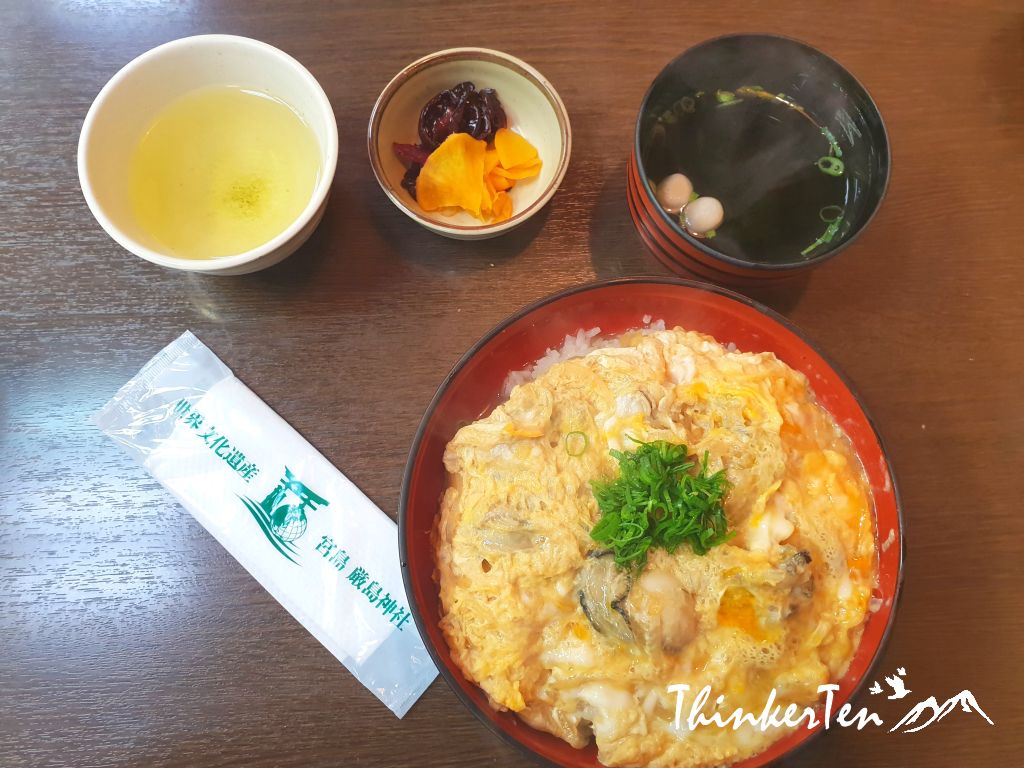 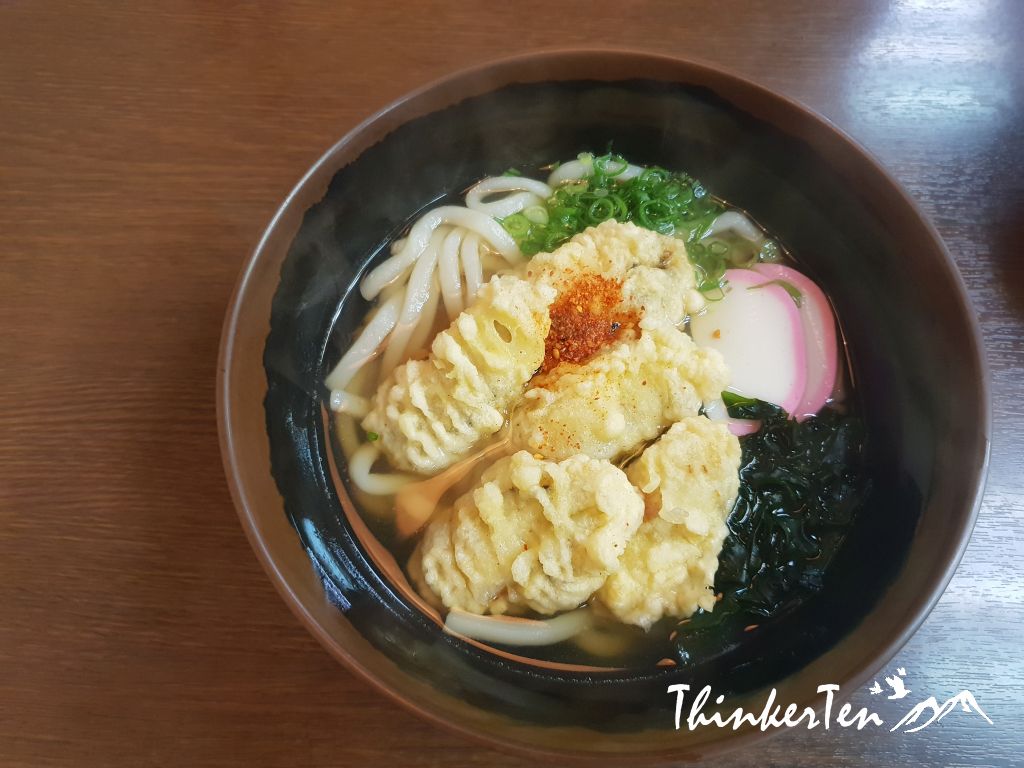 Since Miyajima is also famous for its deer, so Deer Poop Ice-cream is a must try too.  I have ordered lemon as lemon is the top fruit in the Seto-inland sea region.  You can order the ice-cream with or without deer poop. With deer poop it cost a little more. 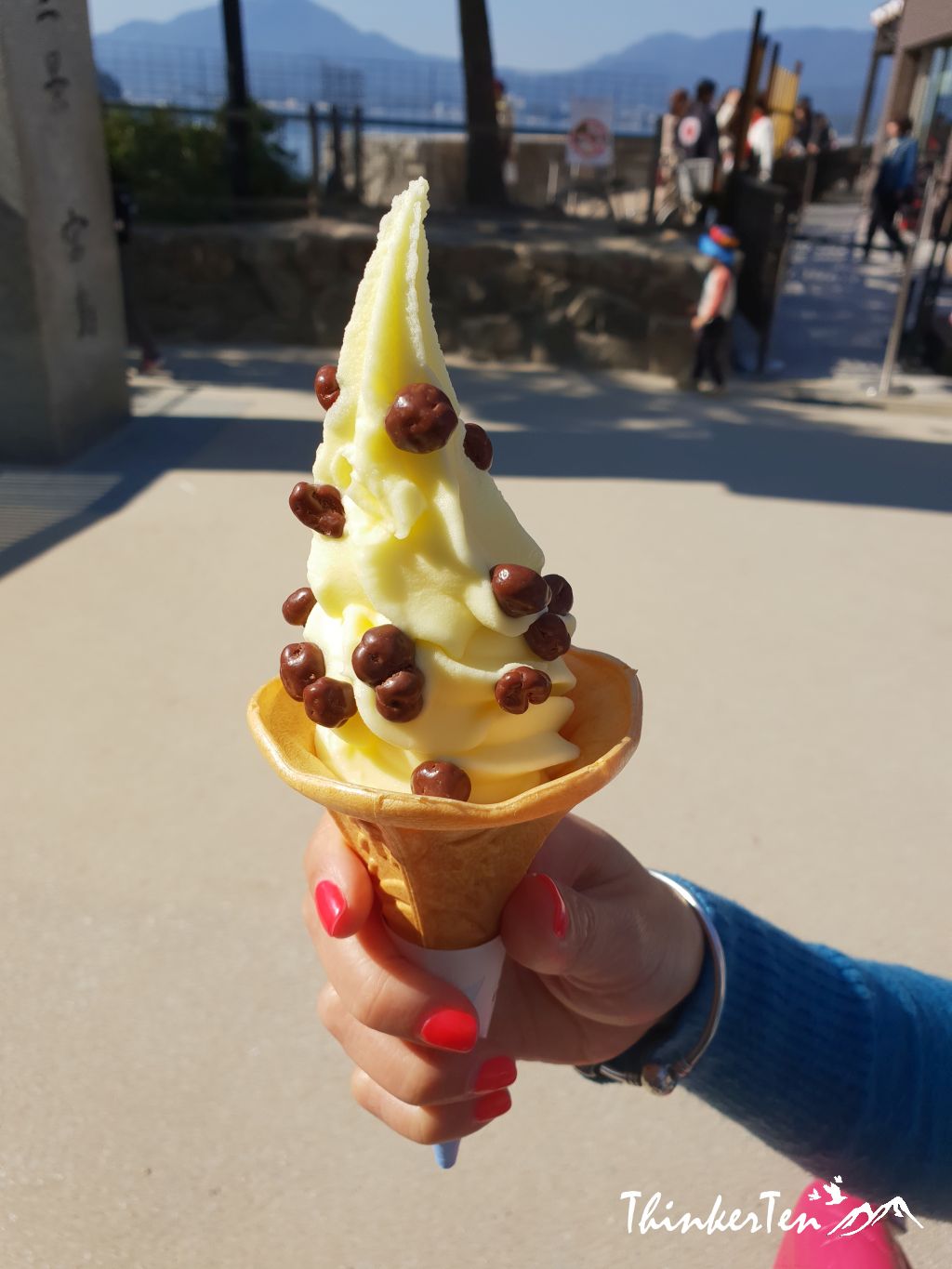 Lovely place to spend a pleasant and magical spring afternoon. Rich in history and beauty!

what a cool place to visit and all of that food looks so delicious! What a wonderful experience

Such a clever look to have it floating in water at high tide. I’m equally impressed with all those delicious tings to eat, one day I hope I’ll be able to visit.

This is the only floating shrine in Japan that is built on the water, it represents Japan and often shown in many covers of magazines.

I always looking forward to your posts to see where you traveled and what places you visited. Your photos are amazing I feel like I’m there with you. Thanks for sharing these impressive pictures and the story to go with them.

Thanks for your kind comment. Glad you love the pictures too. Japan has many beautiful scenery and great for photography.

This looks like such an amazing place to visit. It looks like there are plenty of attractions for travellers to visit.

You can spend half to a day in Miyajima Island, there is another portion where you can explore is the Mount Misen. You can ride the ropeway to go up the mountain top and do some hiking there.

I enjoyed your beautiful pictures. I have never been to Japan, it certainly is on my list

Japan should be in anyone list if you are doing Asia. It is really unique and does not look the same as compared to other Asian countries. It still remains the old and tradition which you can see from the architecture and daily activities.

Thanks for providing more information about the floating shrine in Miyajima and your experience. Your photos are gorgeous.

What an amazing experience you had there. This is such a perfect travel destination, I love the view so much.

Dear Cathy,
If you are doing Hiroshima, Miyajima floating shrine is a must-see.

This place looks like a dream. All of the pictures looks great. The food looks very tasty. Definitely a destiny to add to my list.

Dear Hola,
There are several must-eat food in Miyajima Island, such as oysters and momiji manju.

The Floating Shrink in Miyajima Hiroshima is so beautiful. We want to see it ourselves.

Such an useful blog with beautiful photos! It looks like you really enjoyed it (and I would too). 🙂

wow the floating shrine is beautiful! i’d love to visit and see this one day

Japanese architecture is just incredible, I hope to visit one day as would love to see it all up close

Wow such incredible sights! The floating shrine is really incredible. Thanks for sharing!

Japan is the one of amazing place I’m dreaming to visit. I love Japanese, the’re very kind. Would go to these places when I visit Japan this year.

Japanese are very polite and kind-hearted, I think they are being crowned as most polite nation on earth.

This place is so cool! I would love to visit there. Your pictures are amazing as well.

Wow you have some amazing experiences. I seriously love these and would love to see the floating shrine in person.