Sankeien 三景園 literally meaning three views so the garden is divided into three sections which represent “countryside,” “mountains,” and “ocean.”. 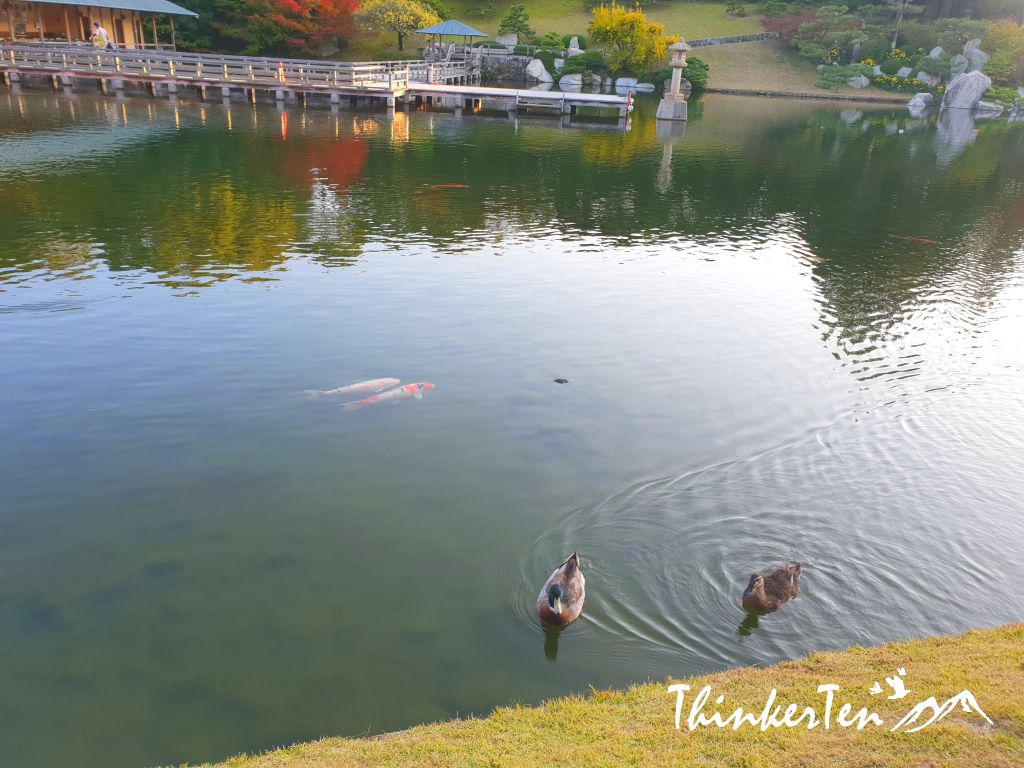 Upon entering you are on a platform extending out into the large body of water which represent the Seto Inland Sea. (Seto Inland Sea is the water separating Honshu, Shikoku, and Kyushu.). 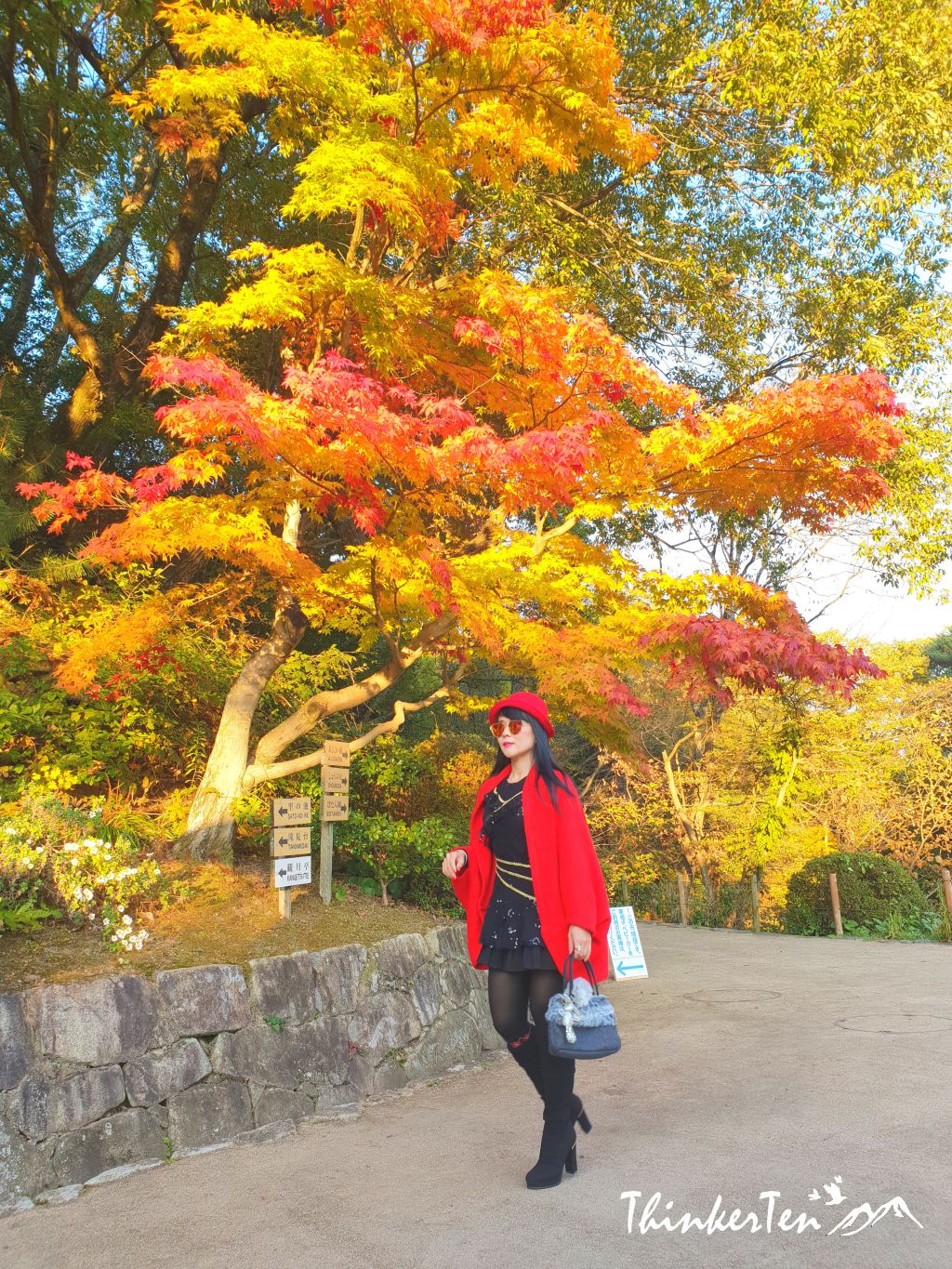 When is the best season to visit?

One of the best season to visit in autumn to check on the maples trees leaves turn red.  I was lucky to be able to view the red maple trees finally as I could not catch the maple trees turn red when I was in Tenryuji Arashimaya Kyoto and Ritsurin Garden in Takamatsu Shikoku Island a week ago. 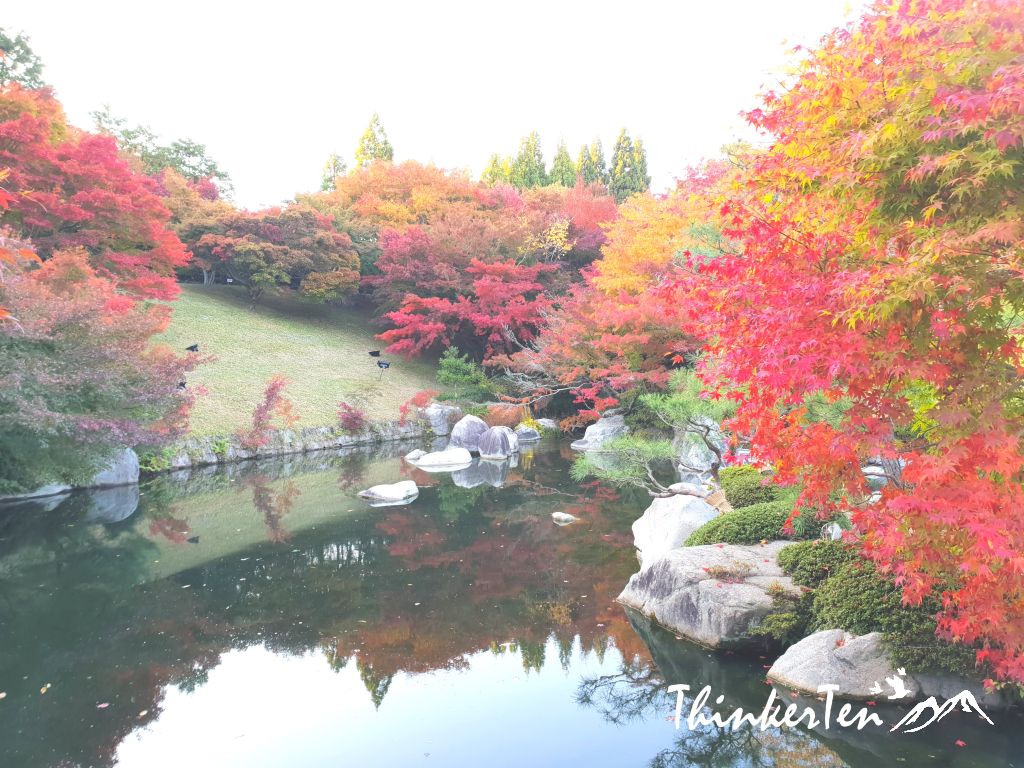 The timing for red maples turning red usually in November but it also depending on the regions in Japan. The Timing of the maple leaf season can vary by a few days to one or two weeks. If you are into autumn color in Japan, do choose your timing wisely and well, sometimes, it depends on some luck too. 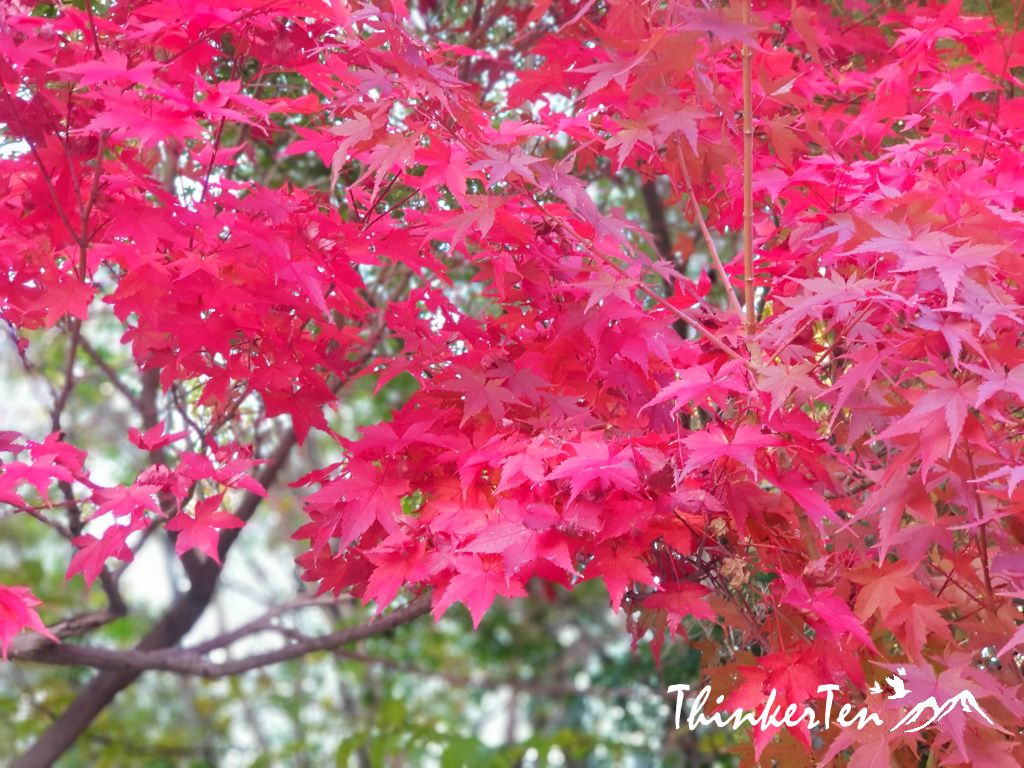 The common things to spot in a Japanese garden are water, rocks, arch bridges, stone lantern, trees and flowers, and koi fish.  Yes, don’t forget the tea-house too.

The Japanese garden is considered one of the most important elements of Japanese art. It is similar to Chinese Garden as it was inspired by ancient Chinese style. There are similarities but you also able to spot the difference if paying enough attention to the details.  For example, Chinese garden usually has buildings in the center of the garden. 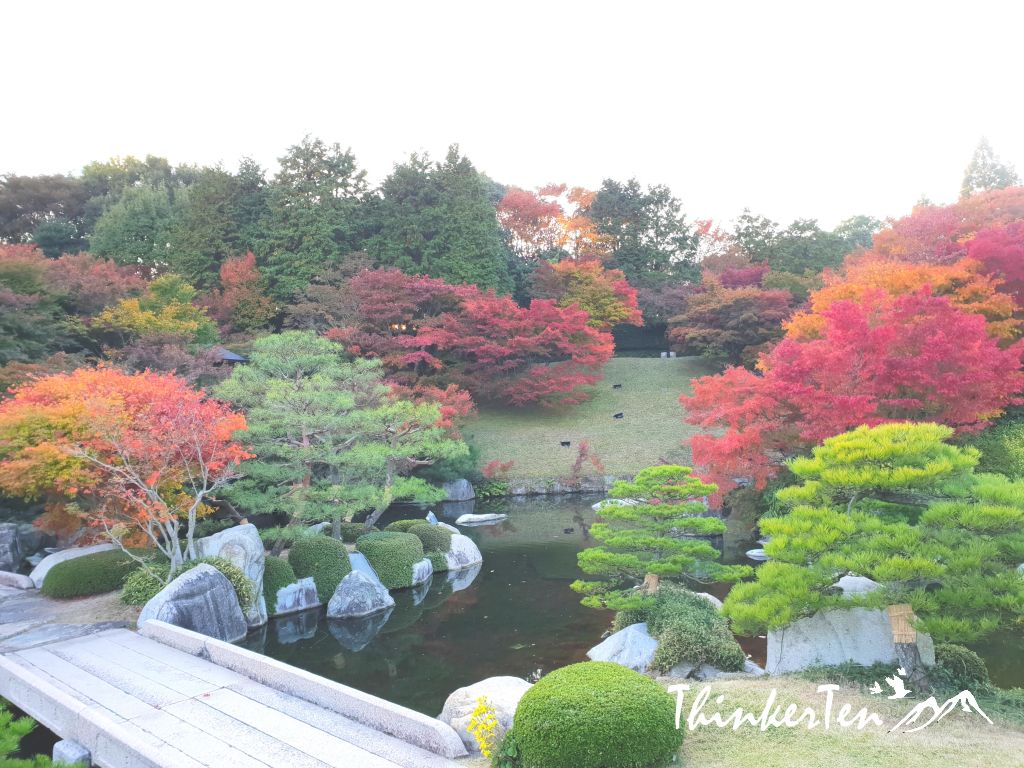 Arch Bridge is a common feature

Arch Bridge either in wood or stone is a common feature in the Japanese garden, originated in China. The arching structure will allow boats to pass beneath the spans. Some called this type of bridge as “Moon Bridge”. 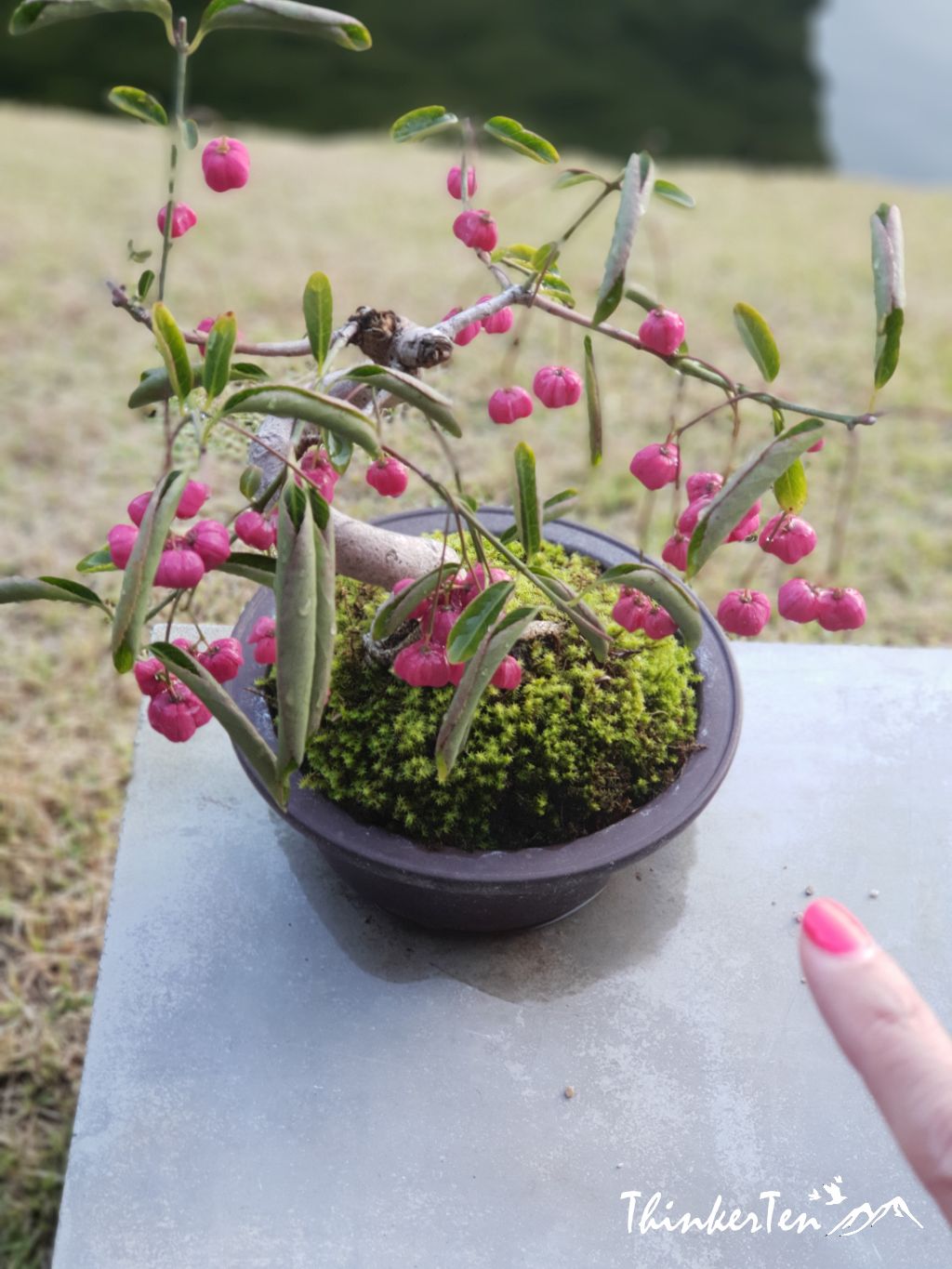 Spotted another feature of Japanse garden, the lantern also called toro in Japanese. There are haning metal toro and stone toro in standing version.

Other Sankeien in Yokohama

There is another Sankeien Garden in Yokohama but the Japanese writing is 三溪園. Do not get confused with the one in Yokohama.

There are hundreds of Koi Fishes and appeared to be very hungry.  You can purchase the food for the fishes and feed them.  Very colorful and huge.

Have you wondered why Koi fish were found in the pond of Japanese & Chinese garden? Koi symbolizes many good qualities for example, they are known to swim against the current and overcome great obstacles, therefore koi symbolize strength and perseverance. These babies can grow very big and live for up to 35 years, very long life compare to other fish. Koi also bring in good luck and prosperity so some businessmen like to koi pond in their house. 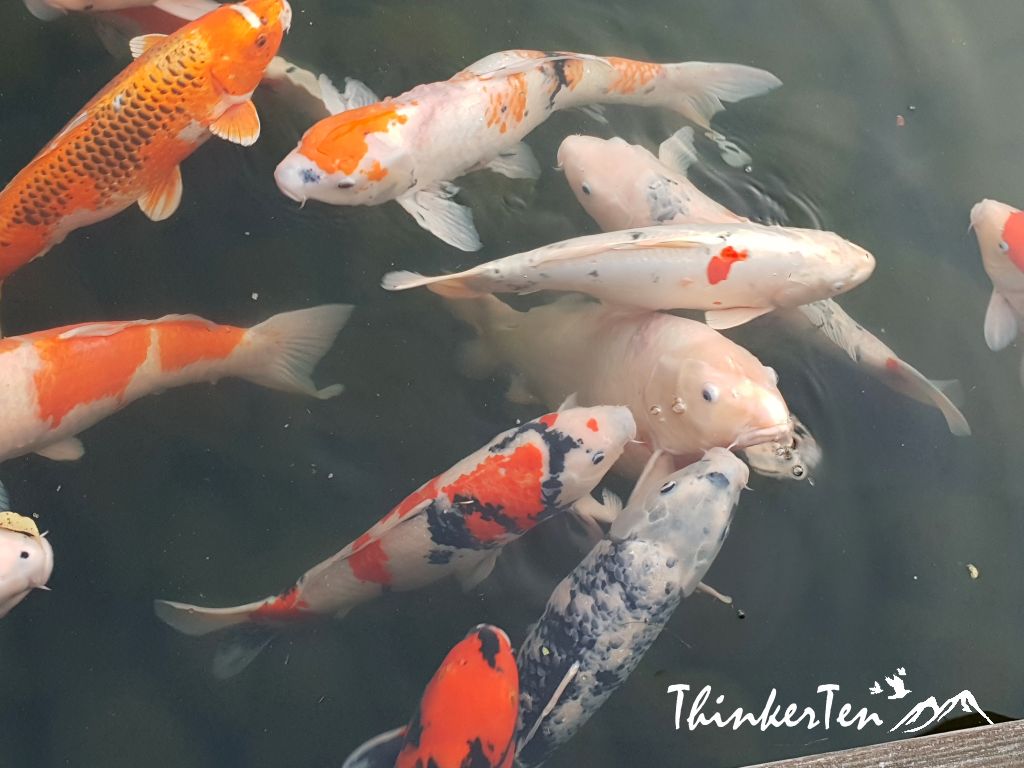 If you are staying in Hiroshima Airport Hotel do pay a visit to Sankeien as it is only located next to the hotel. You can walk over from the hotel.  If you have an extra hour to spend while waiting for your flight, you may want to kill some time here at Sankeien Garden.  Truly beautiful and many photo opportunities.

Hopefully we can land there too. wow a beautiful place really.

Wow, how gorgeous. This is my kind of garden to explore. I just love all these colors here. I must go one day.

There is something beautiful about the colours of autumn. I have to admit I love seeing the different colours all the leaves turn around us.

So beautiful place..The red color maple photo is detailed one, loved it. All the different beautiful colors in one place that’s amazing.

The photos are just absolutely awesome. It is quite indeed colorful living in there. Really reminds me of the good old Japanese anime’s I’ve seen before.

Many people learn about Japan through anime. The Japanese anime culture has gotten so much impact around the world.

I know that Koi fish is lucky for the chinese too. I didn’t know they also symbolize strength and perseverance. That hotel sounds a really lovely place to stay.

Koi fish symbolize strength and perseverance because they swim against the current.

Didn’t know Hiroshima is so beautiful. Had quite a different idea about it. Thanks for letting know.

Hiroshima boosts 2 important Unesco World Heritage Site, the Atomic Bomb Dome and Miyajima Itsukushima Shrines also known as the floating shrine. It is unique as it is the only shrine that was built on the water in the whole of Japan.

Oh wow! Those colours are truly amazing! We have a number of Japanese gardens inside of larger gardens but of course we don’t have those stunning red maple leaves. Just jaw dropping!

We have Japanese garden over here too but we do not get to see the red maple leaves too as we do not have 4 seasons over here.

OH. MY. GOODNESS. The colors are absolutely STUNNING! Thank you for sharing!

The color are so bright and stunning! They are gorgeous and make the perfect backdrop for photos!

Oh my gosh, those fish are huge. I would never want to leave here, I’d take photos all day long. What an amazing place to spend time and relax. We don’t get any autumn color around here, so this would be sometime incredible to see.

We don’t get any autumn color in where I live too, so I was so excited about the beautiful colors in this garden. Japan has koyo season in autumn where you can watch the leaves turning from yellow to red.

You look so cute in that outfit! I would love to spend some time there and just relax.

What an amazing garden. My coworker is from Hiroshima. I have to ask her if she heard of this place!

That is amazing garden, it is always fun to watch trees color changes. Here I am missing it. Great post.

Those autumn leaves are very romantic-looking! We are planning to visit Japan this July and currently arranging for our schedule and itinerary. I will add this to our list!

So autumn is this beautiful? I love the too much color going on in the garden and I’m even wishing I lived where I can see much beauty in autumn. Gram-worthy garden girl!