Seville is a beautiful city in Spain, the capital of southern Spain’s Andalusia region. There are many things you can do in Seville and one of the important sites is the Gothic Seville Cathedral.

Seville Cathedral is said to be the third-largest church in the world. What made it stands out is the tall minaret but turned Bell Tower now. It was originally built as a minaret between 1184 and 1198 during the Moorish period.  It was a mosque turned into a church.  The original site was called Almohad Mosque. You will notice plenty of Islamic and Arabic influences in its architecture.  The design and print of minaret look similar to Emin Minaret in Turpan Xinjiang China.

The cathedral was added in the Unesco World Heritage sites list in 1987 together with the adjoining Alcazar Palace and the General Archive of the Indies. 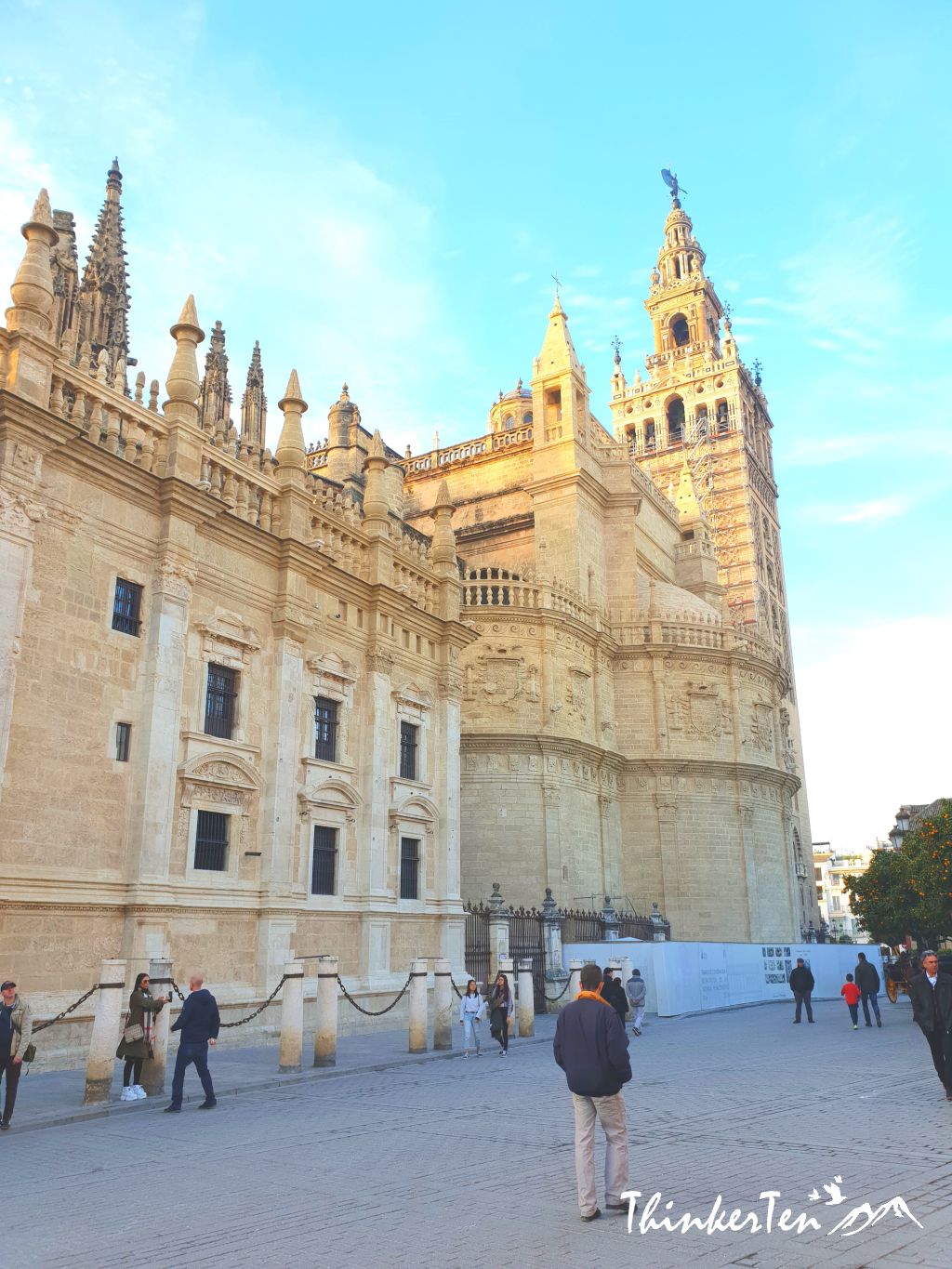 Why you will notice so many Islamic influences in this region?

In the southern part of Spain, in the Andalucia region, you will notice lots of Islamic influence. Let’s look back at the history of Spain. Spain was ruled by Visigoths, a German gothic tribe who invaded France, Italy, and Spain. The Visigoths were the western branches of the nomadic tribe of Germanic people also known as Goths. Then Moors conquer the Iberian peninsula and lasted 781 years (711-1492) in Spain. Who are the Moors? There are the Arabs from the middle east (Syria), the Amazigh people of North Africa and the indigenous Iberian tribes who converted to Islam during that area. But the majority of the Moors are from North Africa.

After 1492, Islamic Spain ended and took over by the Catholic Monarchs.

Wonder why there are so many orange trees in the city of Seville?

When you arrived in Seville, one thing that catches the tourist attention is the orange trees planted almost everywhere in the city. Orange trees are not native in Spain but native from China, it was believed to bring back by the Arab merchant back then and planted here. 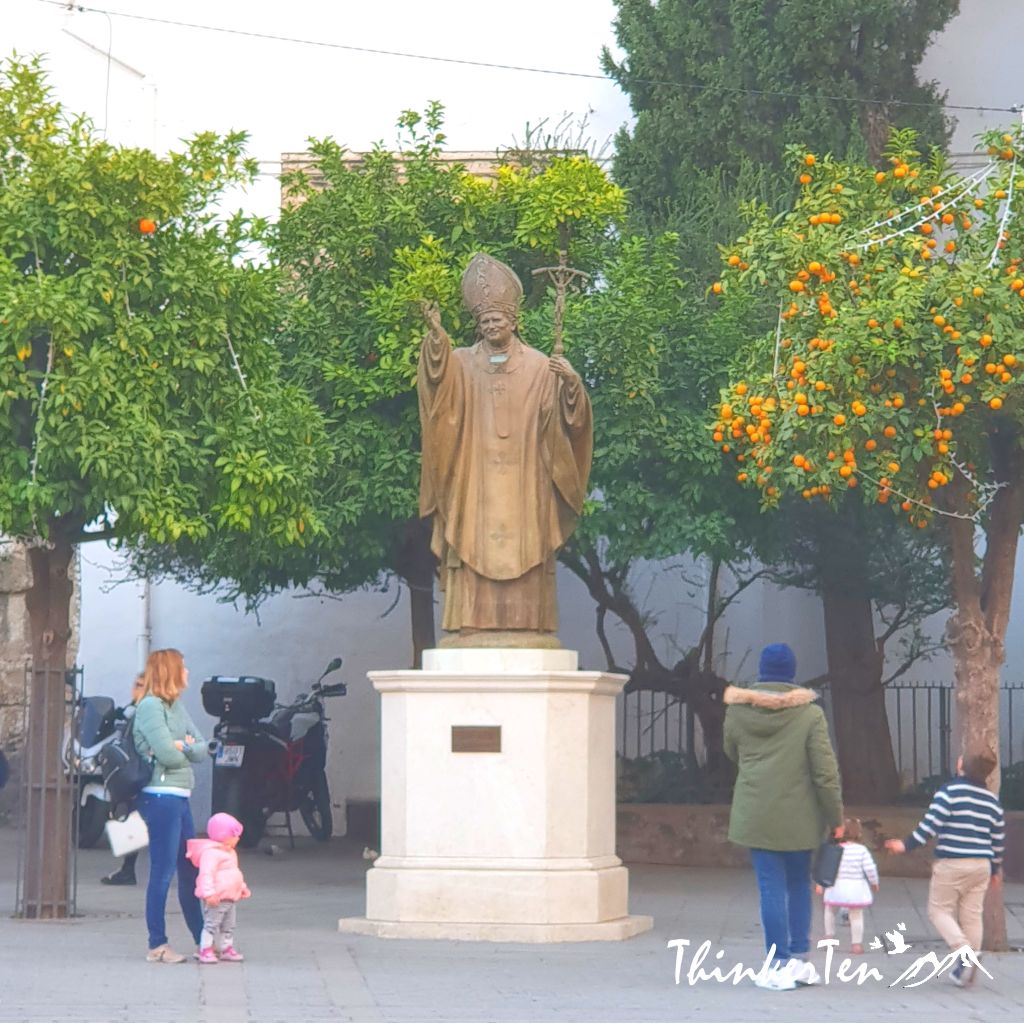 The people in Seville planted orange trees here for the smell of orange blossom and for the beauty of it. If you try to pluck the orange from the trees, no one will stop you but the locals will laugh at you because the oranges are not for eating, it is bitter.  The Seville orange is used for perfume, wine, and jam.

There are 25,000 orange trees in Seville, which makes the city the world’s only city with the most orange trees!

At the age of 55, Christopher Columbus passed away and his tomb can be found in Seville Cathedral.  He was an Italian explorer who best known to discover America with his voyage. He actually wanted to find China after reading a book written by Marco Polo about his adventures in China & Silk Road but Christopher Columbus ended up in America.  Christopher Columbus discovered the first native people there and called them Indian as he thought he has reached India. 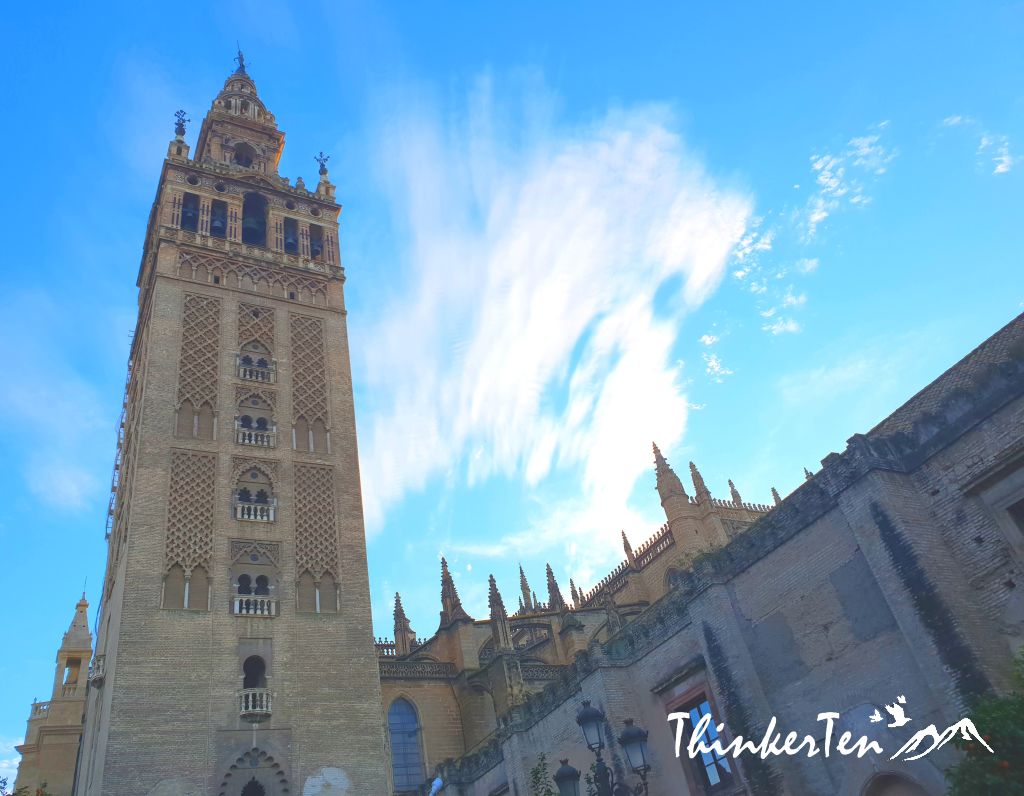 At the top is the 16th century El Giraldillo weather vane, an enormous bronze statue of a female figure bearing a cross to symbolize Faith, the triumph of Christianity over the Muslim world.  The weather wane will help to measure wind direction and one of the first weather instrument ever used. 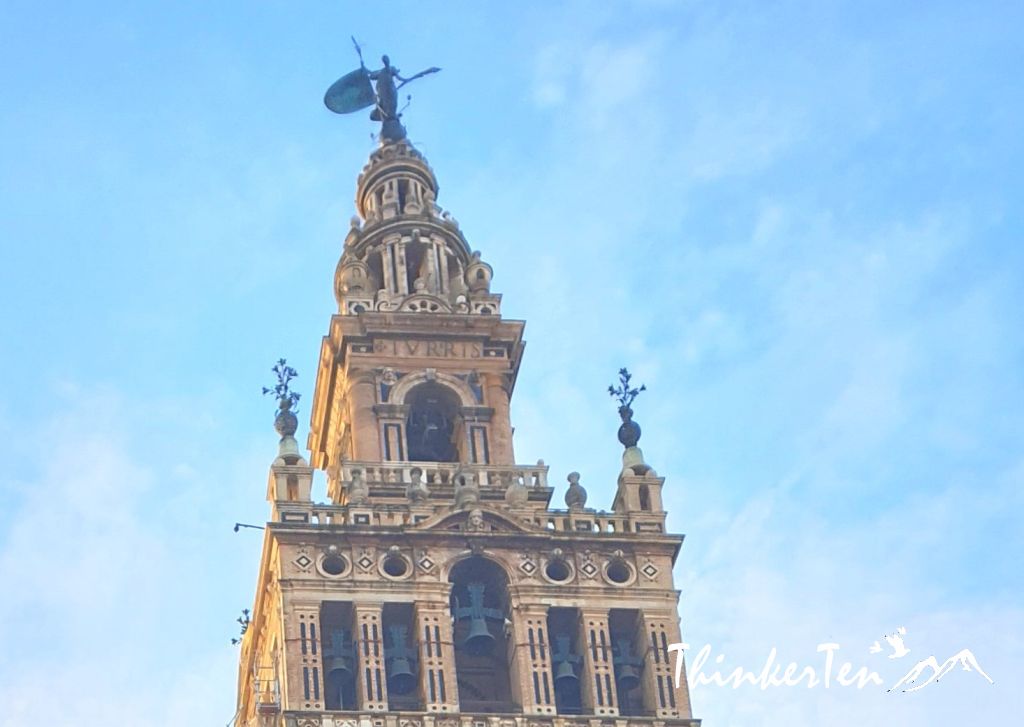 Go up the tower

Going up the tower is highly recommended, you get to see the beautiful skyline from the top, the total floor is 35 floors.

It is better to get your ticket in advance that way you can walk straight in with a pre-paid ticket avoiding long queue. We should take advantage of technologies nowadays, this helps us save time. The chapels and artworks inside out will leave you speechless. You can either get audio or get an English speaking guide to explain to you about the Cathedral of Seville. 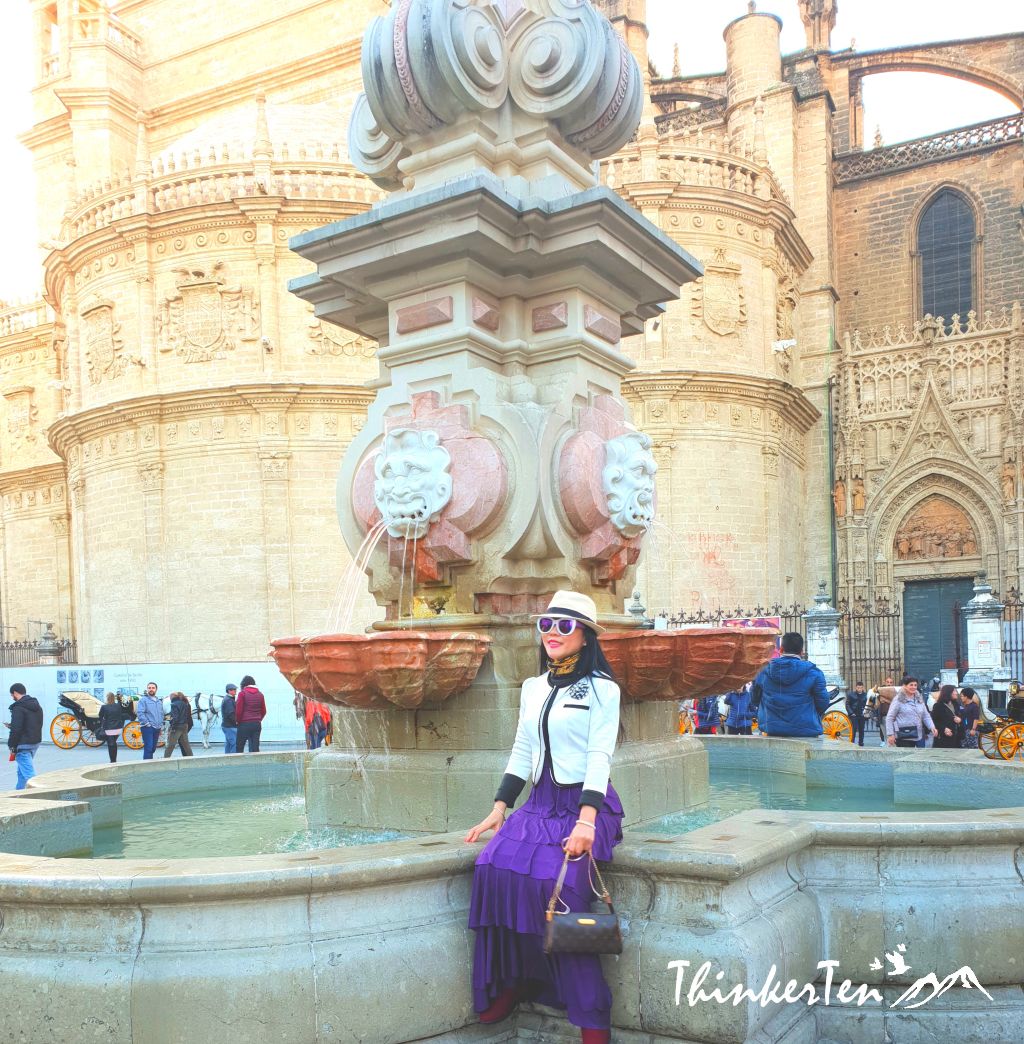 I’ve learned so much right now, thank you! Seville is on my list and I really hope to visit it this year… 🙂

Seville is the capital of Spain’s Andalusia region, this region is full of colorful culture.

From all the places in the world you had to visit the city that brings me so many gorgeous memories of my backpacking solo travels! Thank you for the beautiful article!

Glad to learn that you have done backpacking solo travels, how cool was that!

Seville Cathedral is one of the iconic places to visit in Seville also one of the biggest in Spain. Christopher Columbus tomb was inside too.

The architecture is amazing! I could people watch all day there and take in those gorgeous cathedrals.

The architecture of the cathedral is stunning with both Islamic and roman element. There is a huge minaret now turned to bell towel next to the cathedral. Quite a unique site.

Thanks to Game of Thrones, Seville in near the very top of my bucket list

This post makes me want to go back to Spain for another holiday.

I too wish to visit Spain again and explore slowly about this beautiful city. My trip was too rush.

This looks a nice place to visit in Seville. You surely enjoyed a lot. Loved reading your experience.

This is a must visit place in Seville city of Spain. This Cathedral is so important that Christopher Columbus tomb was placed here.

Spain is such a cool country! I loved the tight little alley ways you find everywhere. This place is pretty impressive being the third largest church in the world!

The little alleyway is really interesting for me as I never seen such narrow alleyway. Some are as narrow and as thin as a cord.

Seville Cathedral is such an impressive and beautiful building. I’d love to visit the city and check it out for myself

Seville Cathedral is the world renowned cathedral, also considered the third largest in the world. It is interesting to see the mosque turned church building.

I hope to go one day. It is a breathtakingly beautiful spot. Lots of history too.

hope to visit spain one day. this is a beautiful place!

The Seville Cathedral is such a stunning building and I love the detail on the tower!

The detailing of the Seville Cathedral facade is really impressive and one should spend some time standing and looking at these beautiful ornaments.

Such a stunning city…I’ve dreamed of visiting Spain for years now. Hopefully someday I’ll make it over there.

Hope you visit Spain in the very near future. The country has so much to offer, history, colorful culture and tradition, and its delicious tapas food.

The cathedral and tower are definitely impressive. I would love to be able to visit some day! I’ve never even been to Europe.

The tower is very impressive and it used to be the Moors minaret but now turned to be a bell tower.