Valencia is the third-largest city in Spain after Madrid and Barcelona, located along the east coast of Spain. The name Valencia came from the word ”Valentia” which means bravery & strength in English. The people of Valencia are called Valencian or Vencianos. The Valenciano speak Valencian and Spanish and Valencian language is a dialect of Catalan. Catalan is a Romance language like Spanish, not exactly the same but closer to French and Italian.

Visiting the old town of Valencia is one of the must-do and eating paella.  Do you know that paella is originated from Valencia? 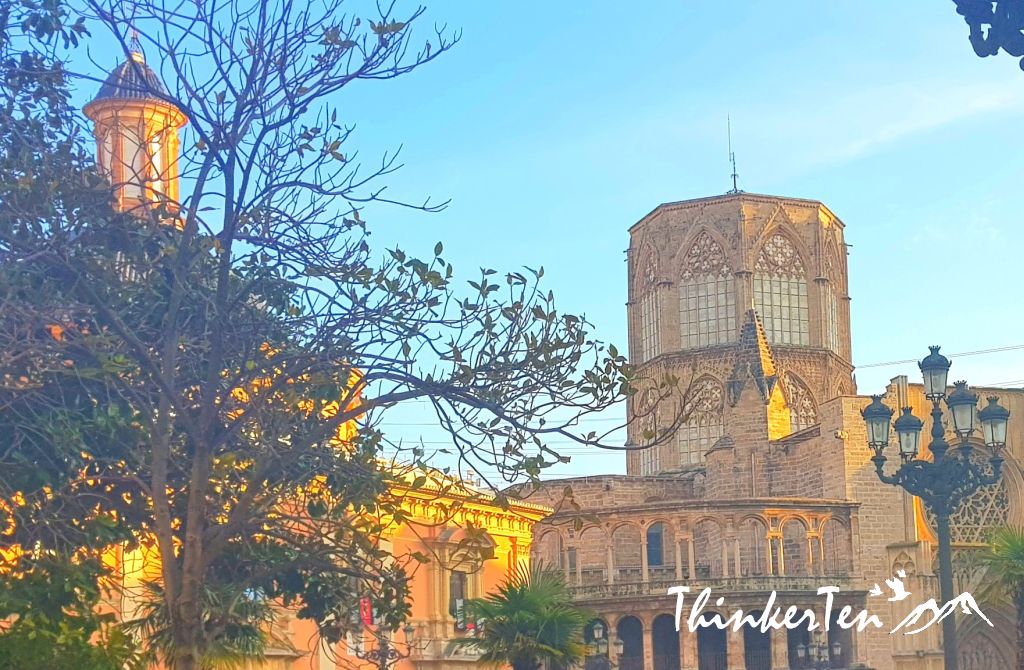 One of the top places to visit in Valencia is Plaza de la Virgen, it is the oldest square in town, a perfect meeting place as there is a big square in the middle with a beautiful fountain plus several old architectures that are worth visiting.

In the middle of the fountain, there is a huge guy, believed to be Nepture surrounded by eight naked women. It was created by local sculptor Silvestre Edeta. Turia is a Spanish river which begins in mountains of Albarracin in Aragon (northeastern Spain) and flows through the Valencia region finishing at the Mediterranean Sea. The fountain takes the name from the Turia river. Anyway, Turia Fountain looks grand and stands in the middle of the square and great for photo opportunities. 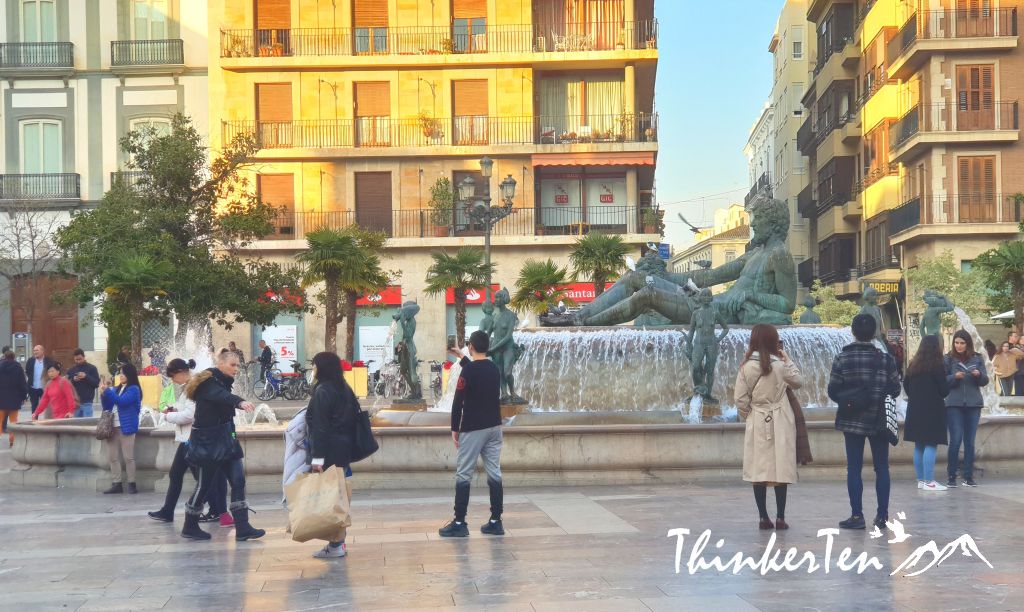 Our local guide told us this is one of the most important churches in Spain. The Virgen de los Desemparados Basilica is dedicated to the patron saint of the city and is the most important religious building in Valencia from the 17th century. It was also the first new Baroque construction of its time.

Basilica has a different type of structure and building layout as compared to Cathedral. If the Pope sees that a church has some historical value in it, he can make it a Basilica.  Once a church has been named a basilica it cannot lose its status of the same; hence the common saying, “Once a basilica, then always a basilica” 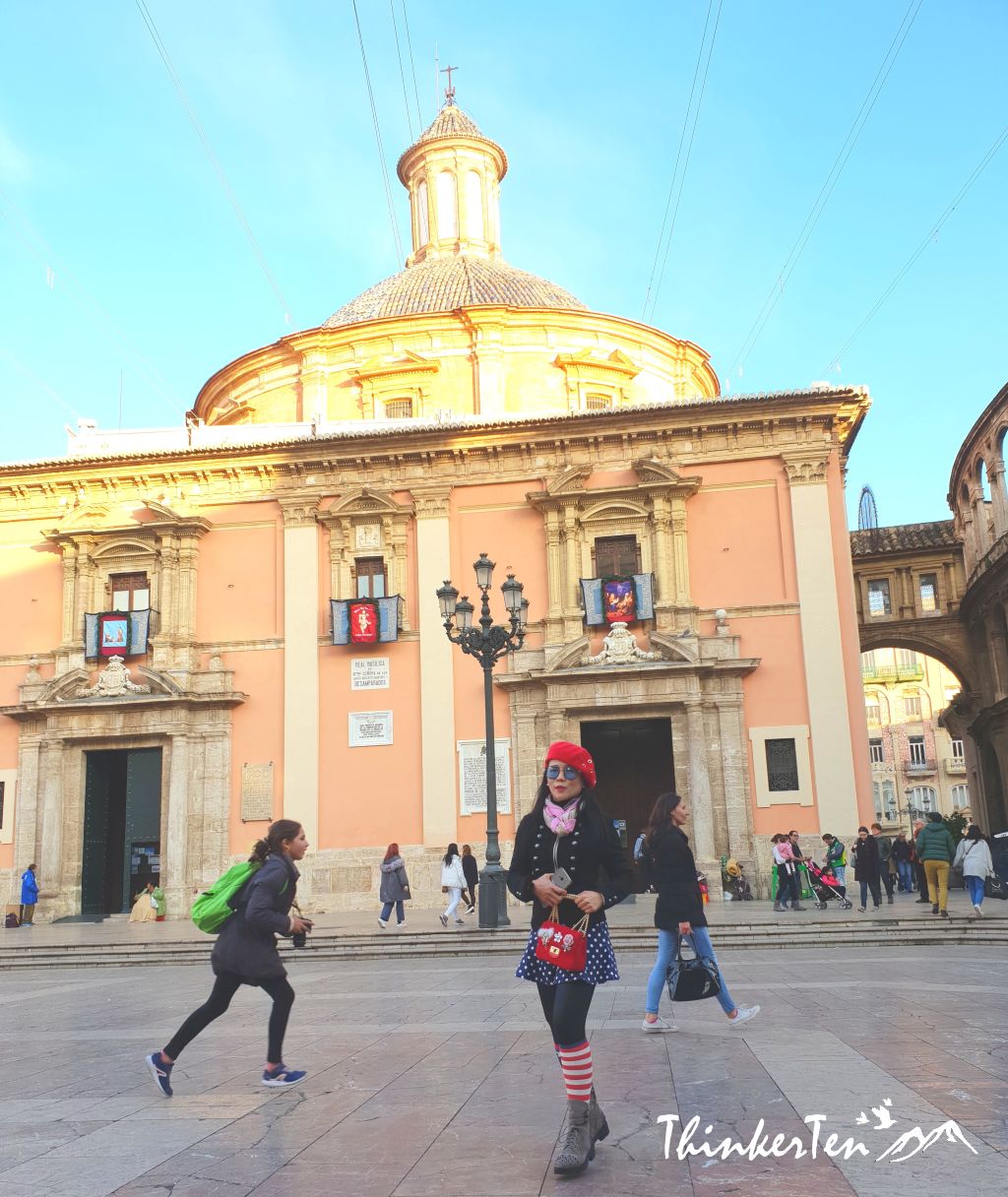 The Basilica is quite small but the interior is very beautiful. Raise your head to look up and you see the impressive domed ceiling with intricate fresco drawings and paintings.

The electric candle is used and replace the traditional wax candle, clean and no mess. 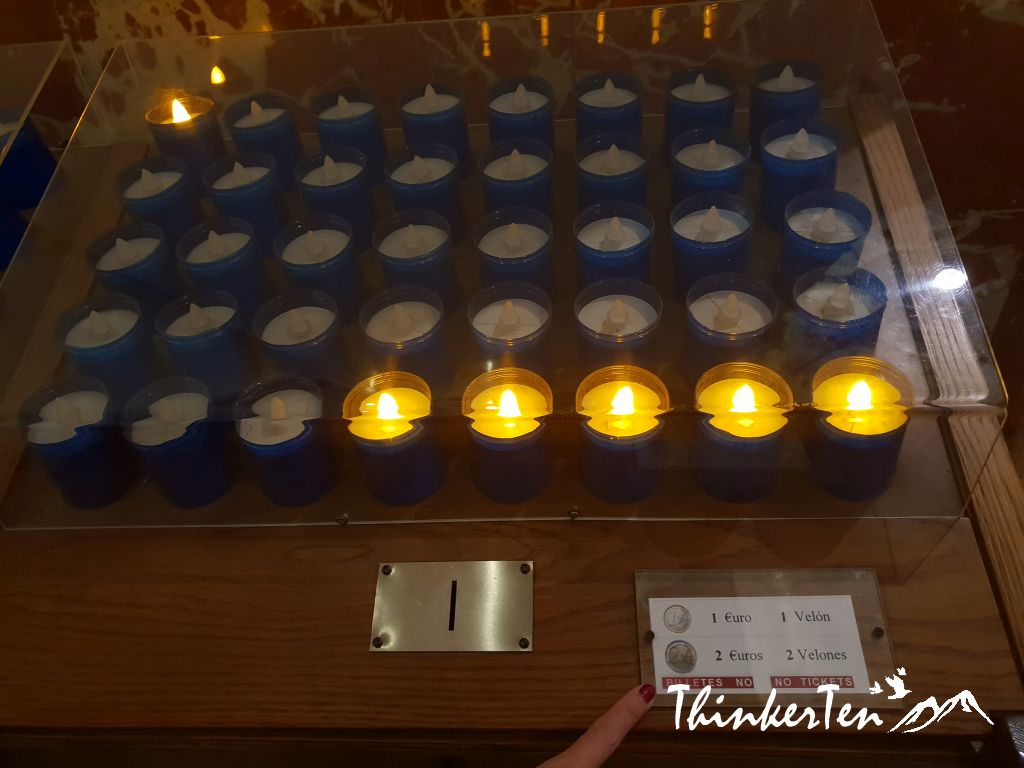 Valencia Cathedral sits next to the Basilica. Cathedral of Valencia was built on a mosque, which started in 1238. The style is Gothic architecture but also contains Romanesque French Gothic, Renaissance art, Baroque and neoclassical elements. The Cathedral is famous for its Holy Grail – the cup used by Christ at the Last Supper.  The Holy Grail store in the side Chapel of Valencia Cathedral with a glass window to protect it. 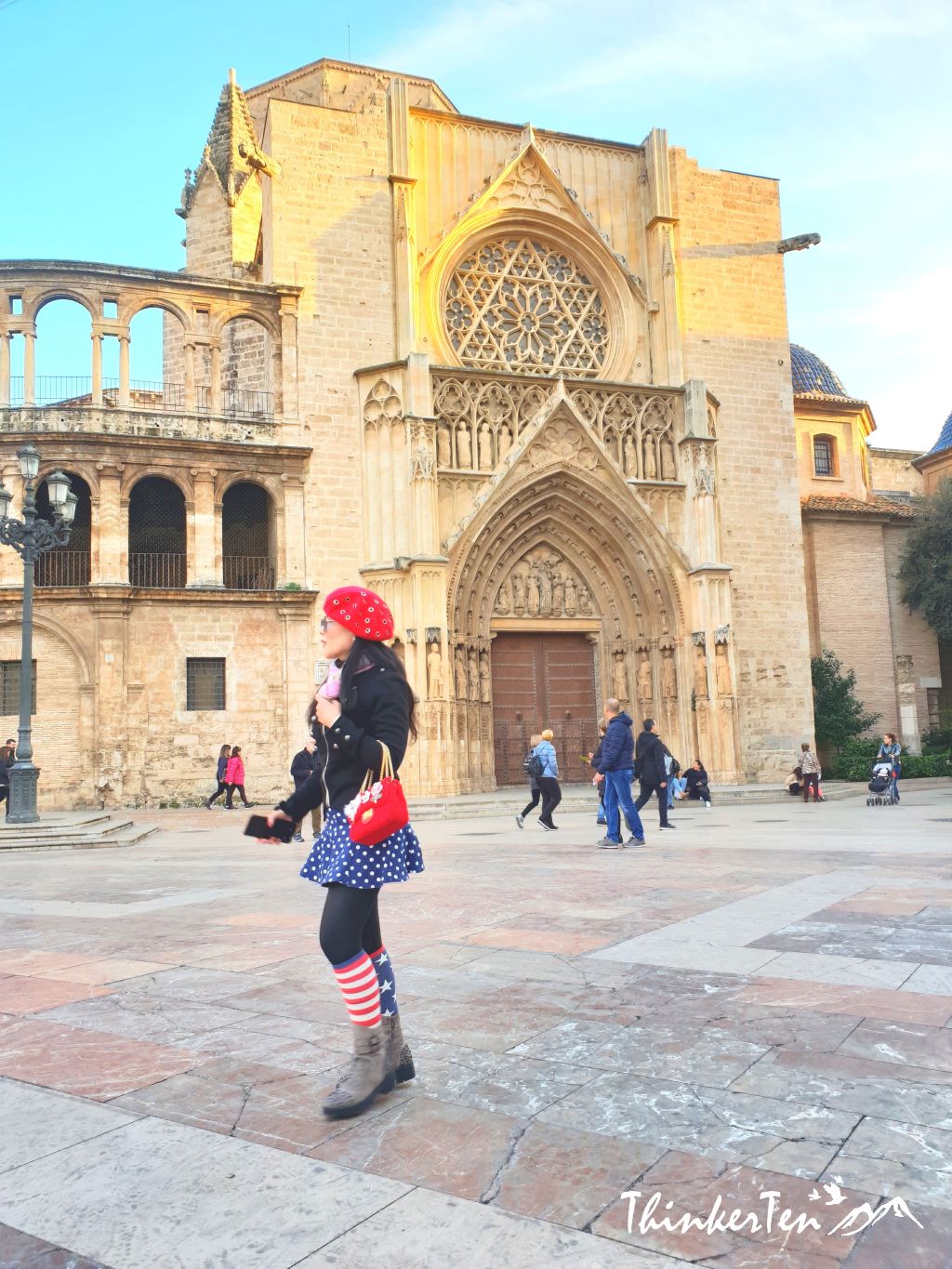 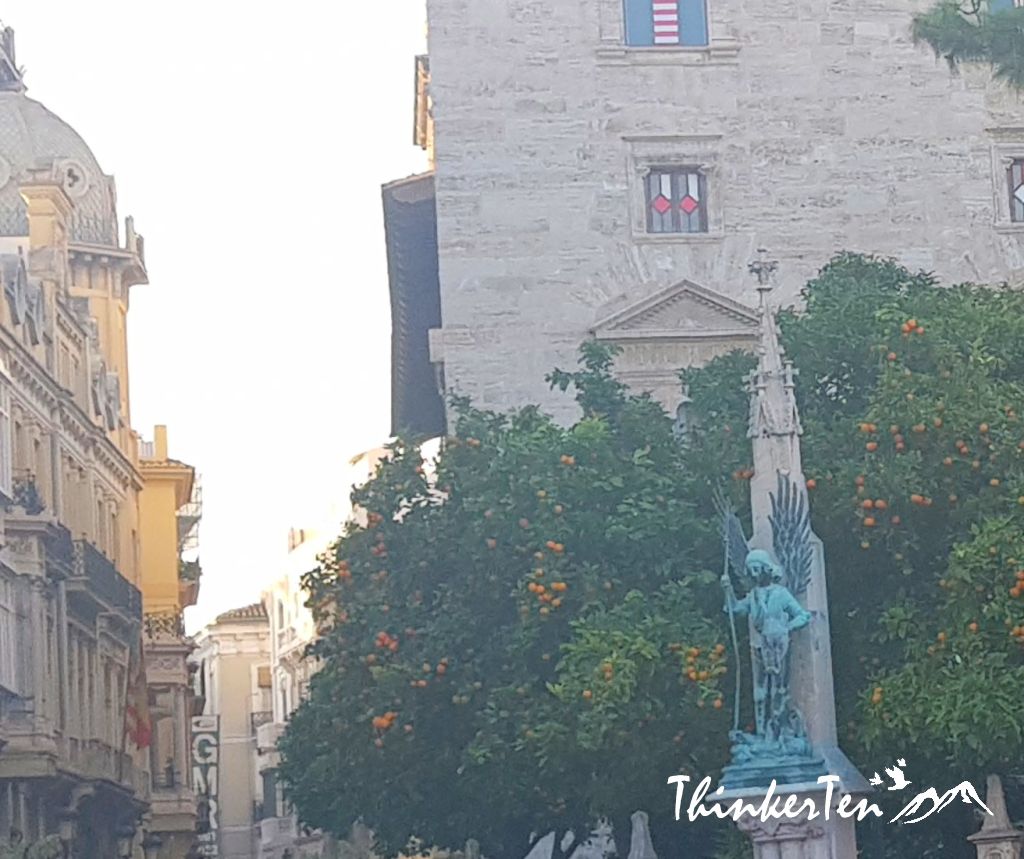 Walking in the old town of Valencia is a nice thing to do.  Take a break and sip a cup of coffee or local drink “horchata” (popular drink in Valencia that looks like milk, taste sweet) with fartons (confectionery sweets, looks like a bread) at the Plaza de la Virgen. And watching people walking up and down the square and children chasing birds in front of the Basilica and Cathedral of Valencia near the Turia Fountain can be very entertaining.

This looks great! Would love to visit here sometime. Just looks so vibrant and attractive!

We speak about visiting Spain all the time. It’s so beautiful. I’d love to go.

Wow, this city looks amazing! I am adding this to my travel bucket list right now. I seriously wish to visit this beautiful place someday soon

This looks like such a wonderful place to visit. Italy has been on my list for a very long time I hope to visit one day.

I have visited many cities in Spain but I miss Valencia and I want to recover as soon as possible!

I was in Barcelona a couple of weeks ago and it was amazing!!! I would love to visit Valencia next, looks amazing.

Barcelona is amazing place to visit and my next stop is Barcelona. Valencia is only 3.5 hour from Barcelona.

I haven’t been to Valencia yet but I have always wanted. It looks so very beautiful, I’d say mesmerizing!

I’ve never been to Spain before but I would love to visit. It seems like a beautiful country.

This place is so gorgeous! I love all of the architecture. It’s incredible!

What a beautiful city to visit! I haven’t been to Europe, and this would definitely be a lovely place to check out. Looks like there is so much to see there.

I would love visit Spain someday. Looks like a beautiful trip.

If Valencia is the birth place of paella then I must go!! Thanks for sharing!

I love Valencia! And reading this post brings back some wonderful memories for me. The old town is really beautiful, and perfect for a long weekend itinerary too.

You are right, you can spend few days in Valencia. It has a lot to offer.

Oh..how I love this country. So much to see, to discover, to love, to admire…. Great insight into the beautiful experience of visiting a mesmerizing place.

Such a beautiful place! I’d love to visit one day!

your outfit is very cute. i would ove to see spain, hope you took more pictures of the city!

Thanks a lot for your kind comment. Valencia has so much to offer and I love the orange trees here.

Love all the things on this city! But the funny part is the orange fruit being bitter haha.

I too thought the orange fruit is for eating, but it is actually not but for decorating the city.