When you are in Barcelona, one of the important places to visit is Montjuïc, a flat hill that houses many places of interest and one of them is the Olympic Stadium. Unlike many other places in Barcelona, this is free entry so there is no harm just to drop by and have a look around.

The stadium was first built in preparation for the International Expo in 1929 then was renovated before the Summer Olympics in 1992. Athletes’ fans should pay a visit here and check out the venue. 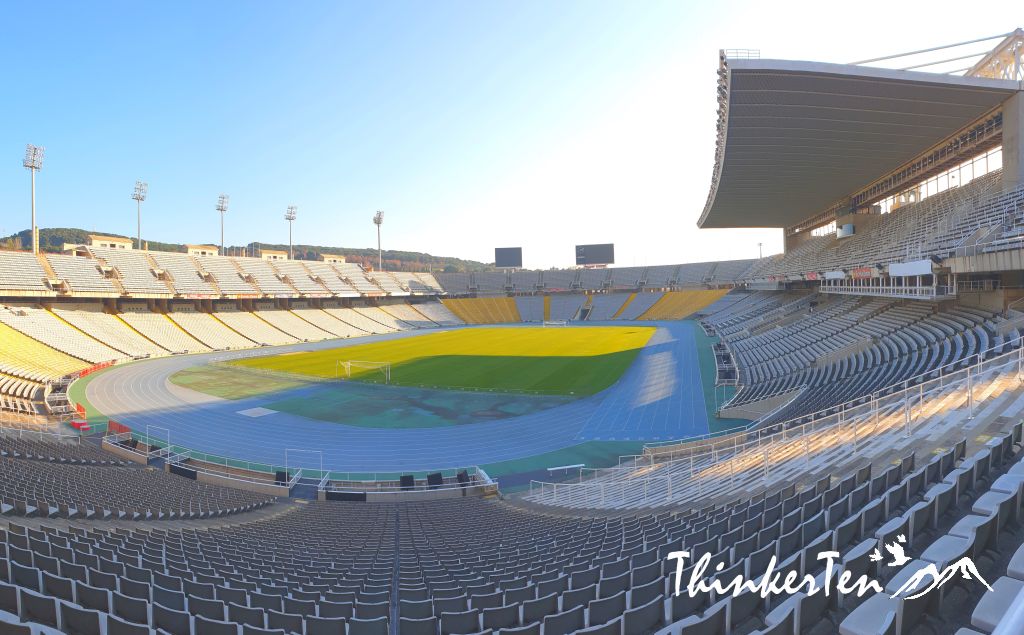 Some old photos showing the historical moment for this stadium, you see them once you enter the stadium. 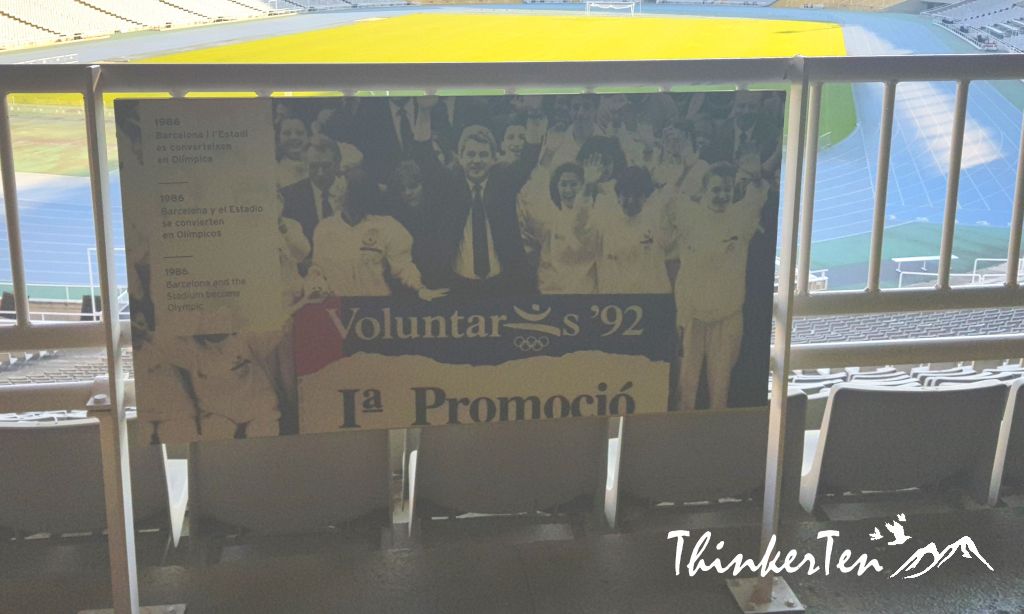 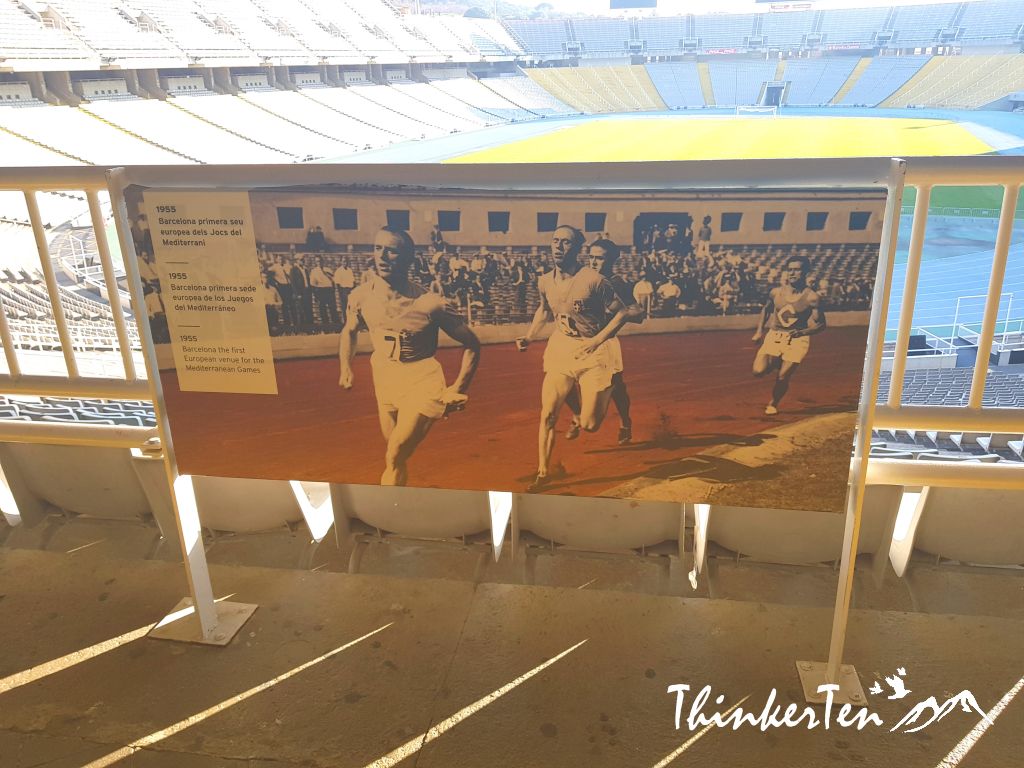 The stadium was having a facelift before the 1992 Barcelona Olympics.  Vittorio Gregotti, the Italian architect helped in the renovations. The core was removed and they left only the outer facades. They also repaired and rebuilt new stands to replace the older unsafe ones. 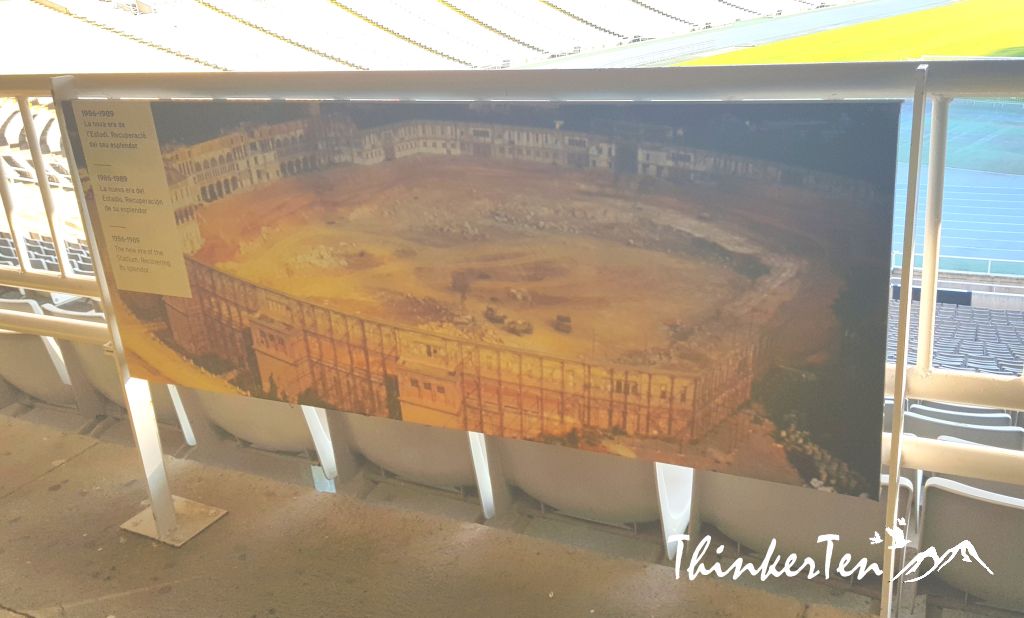 Estadi Olímpic Lluís Companys formerly known as the Estadi Olímpic de Montjuïc (1989-2001) was captured in one of the bin in the stadium.

Gift Shop is open if you need some souvenirs to bring back home. A little cafe is also available to get snacks or drinks. Toilets are free to use and free of charge. 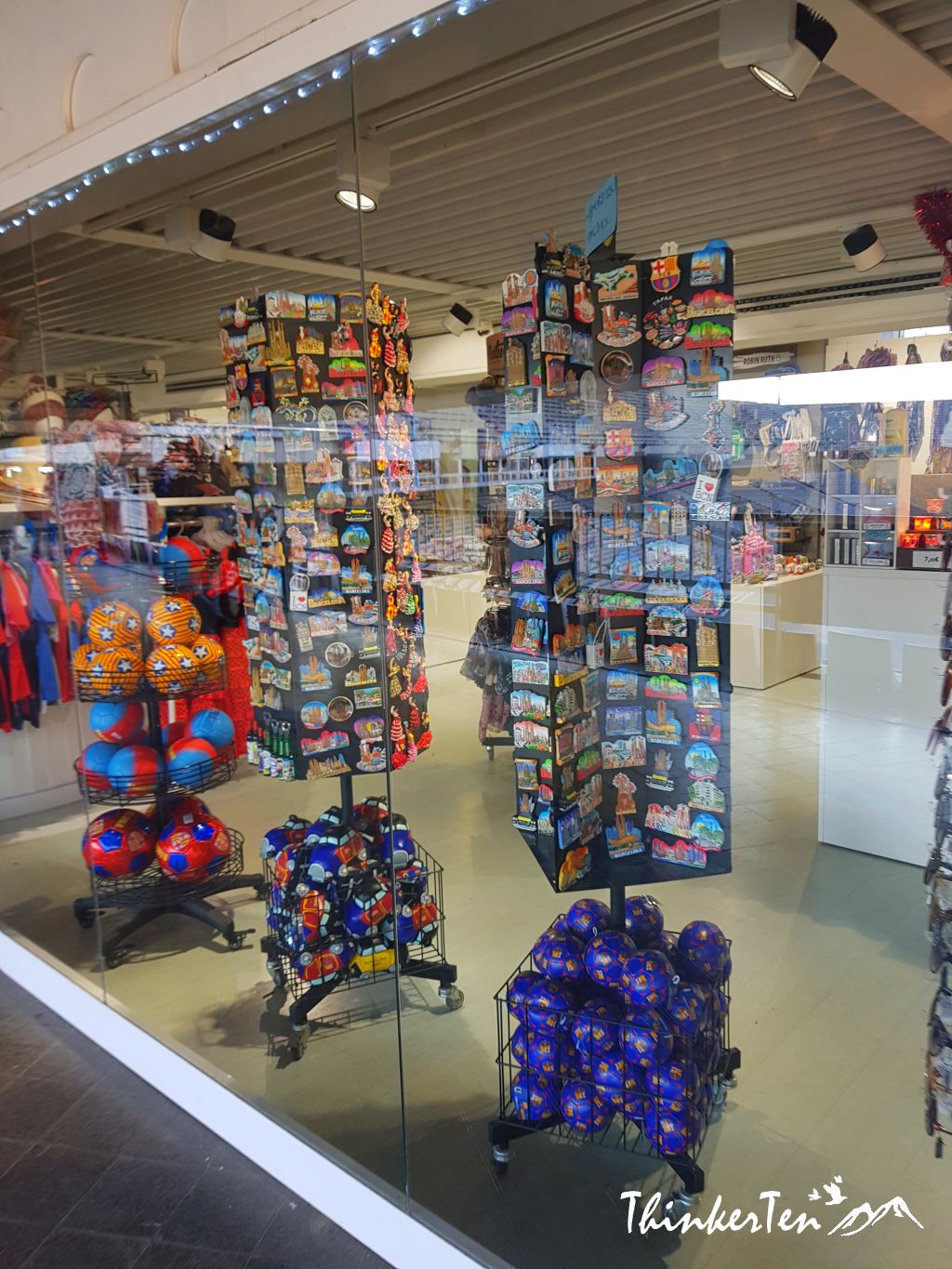 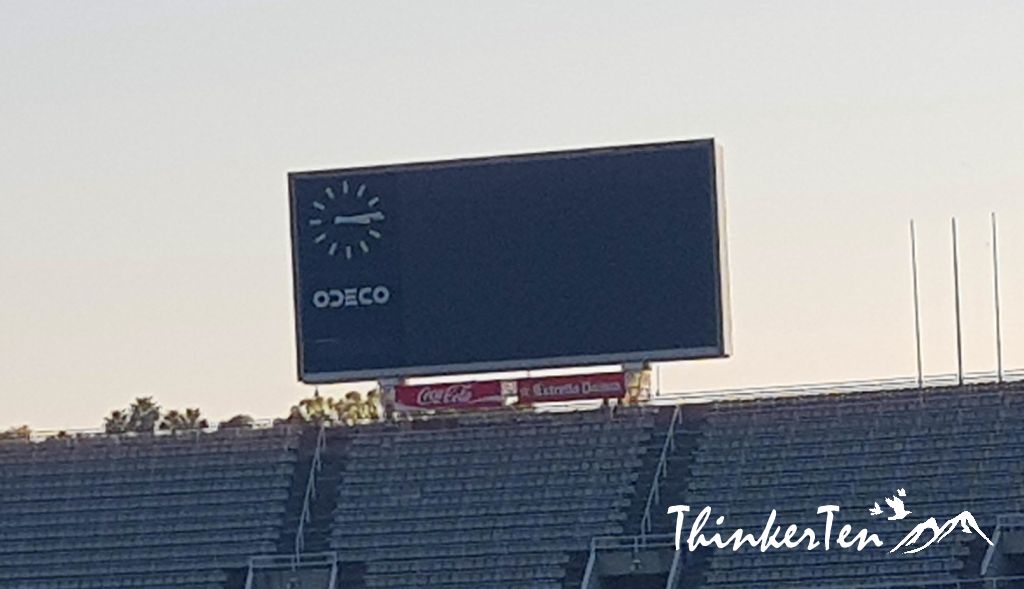 The black structure beside the big clock is the cauldron for the Olympic flame. 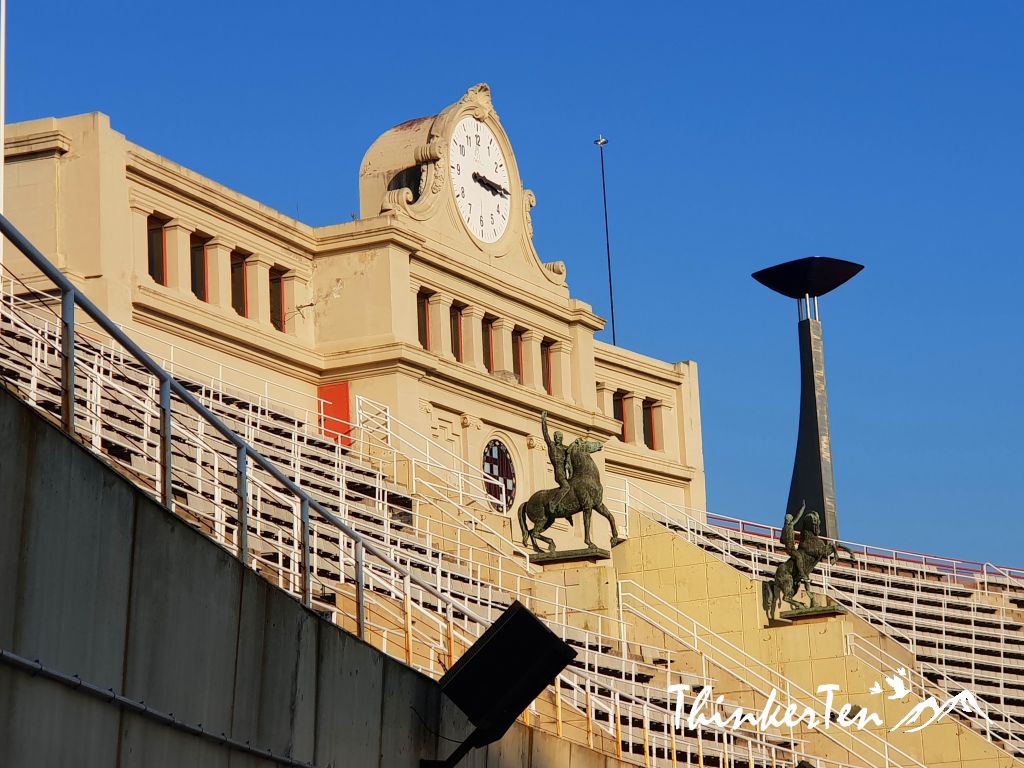 The indoor sporting arena called Palau Sant Jordi is located next to the Olympic Stadium, the look is like a black spaceship, designed by the Japanese architect Arata Isozaki, opened in 1990. It used for a multi-purpose arena, including world-class ports meetings to music concerts. Famous international stars such as Madonna, Frank Sinatra and Beyonce host concerts here. 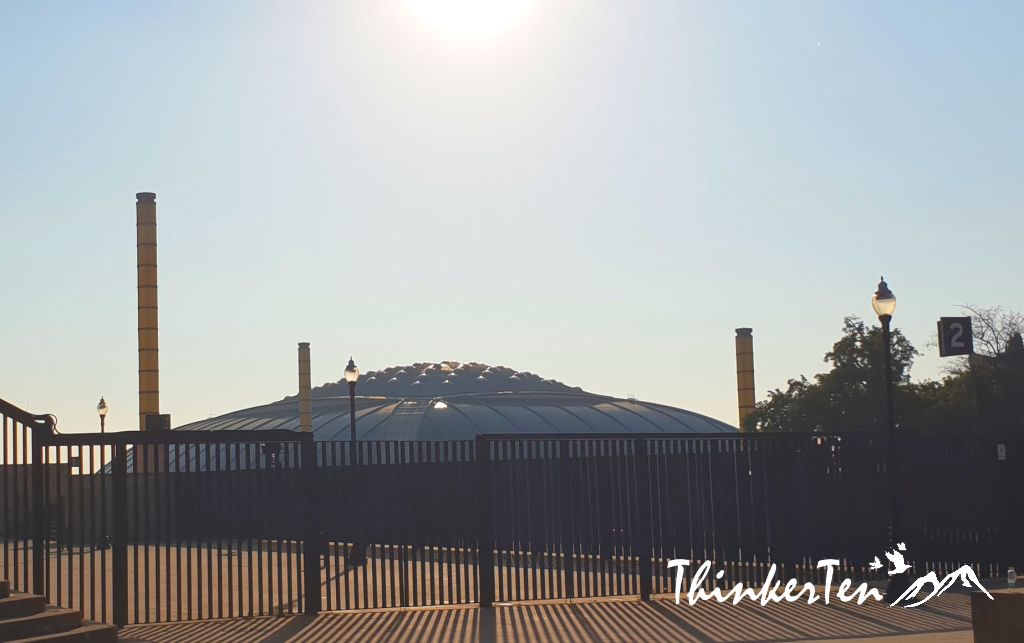 The eye-catching slender structure sits near the stadium, it looks unique and makes me wonder what it is.

It is the communication tower built to help transmit television coverage of the Olympic Games back in 1992. Now, the tower has become a cute symbol of the Olympics and the city of Barcelona. 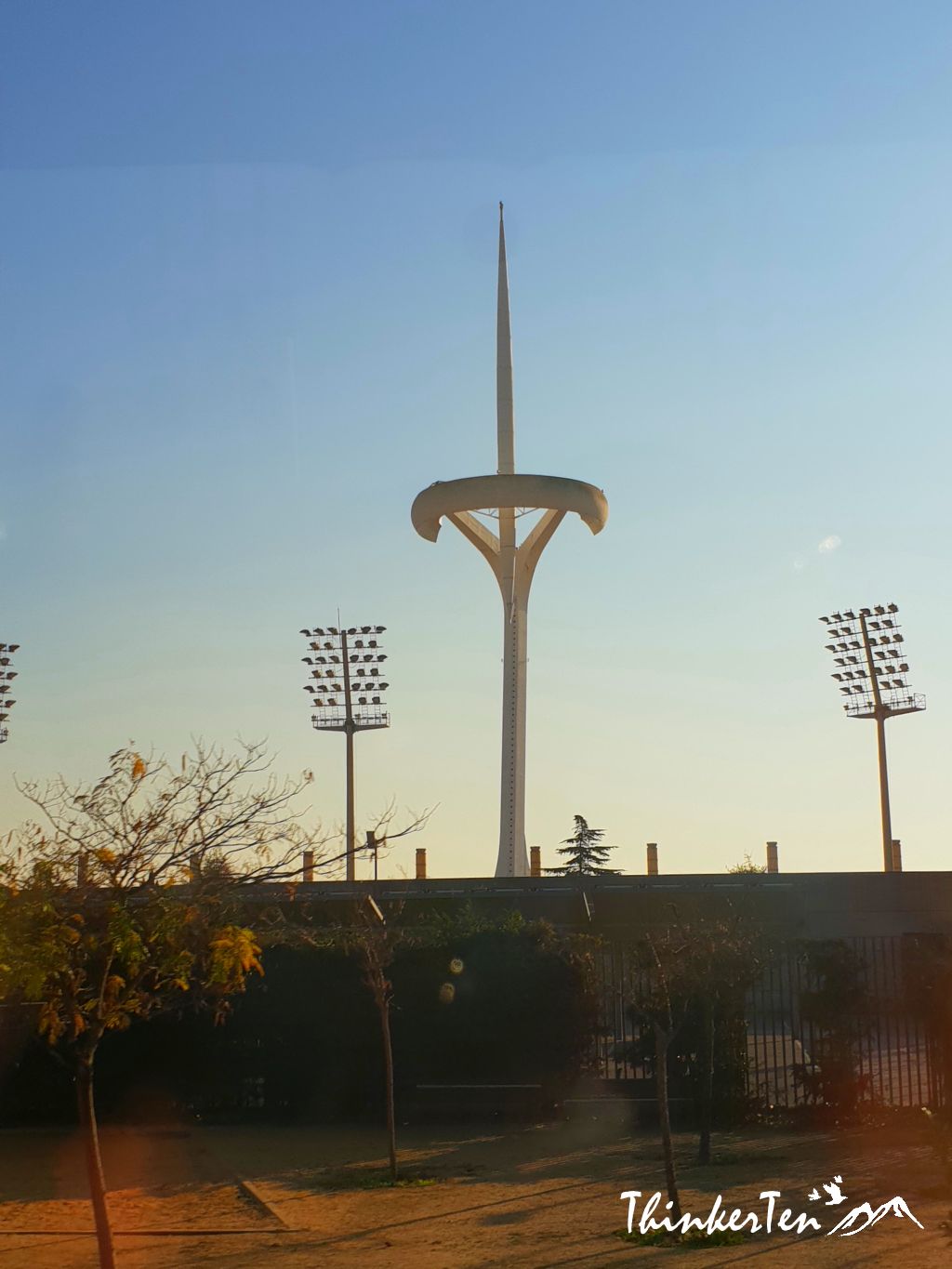 The Barcelona Olympic stadium sits behind of the Museu Nacional d’Art de Catalunya in Montjuïc hill. There are few iconic structures and buildings to look at, the Olympic Stadium, the indoor arena – Palau Sant Jordi which looks like a black spaceship and the eye-catching white tall tower called the communication tower. 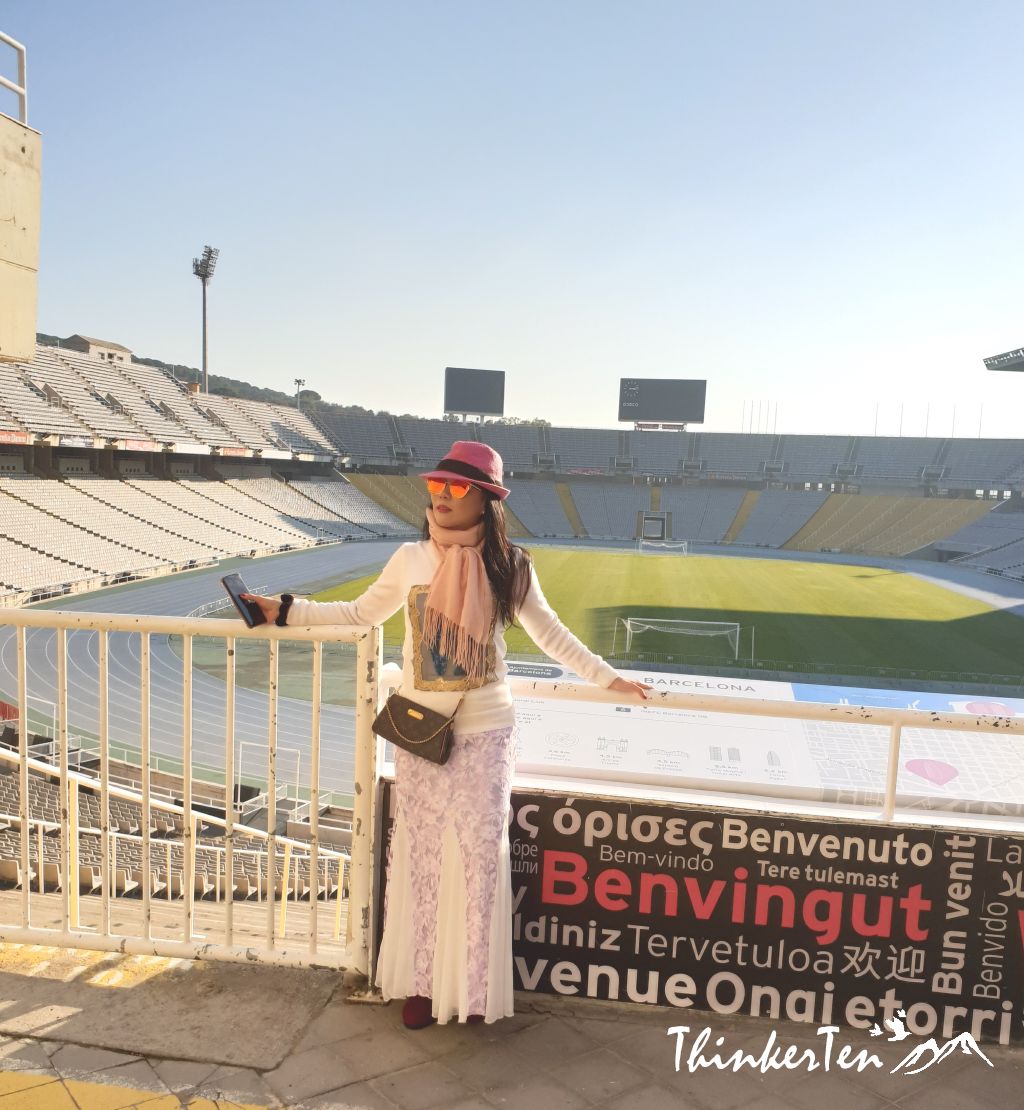 Stepping Back in Time in Sovereign Hill, Melbourne Australia

I love Barcelona. I was just here a few years ago with my friends and we’re actually talking about going back soon!

The place looks absolutely gorgeous. I didn’t even know it existed lol. I feel so uncultured!

Wow, that place is absolutely huge! I would love to watch a game in a packed house there!

Barcelona is one of my favourite cities, the Olymoic stadium is very impressive

I loved and love Barcelona I have been there several times but I miss a lot of things to see!

Wow, Barcelona is one of the famous cities in the world and a perfect place to use in making a movie. I have never been to Barcelona but hoping to see this beautiful city someday!

That is the type of place my husband would love to visit if we ever make it to Barcelona! He would love it.

I have never been to Barcelona before. I would really love to visit one day. I would surely visit this stadium.

Wow, that is truly a beautiful stadium I am always wishing to go to Barcelona to see that place, amazing!

Total envy now! I watched the Summer Olympics in 1992 so I would love to take a tour of the Stadium, its is such a stunning place to visit and explore

Looks like a fun place to spend your day in if you’re in Barcelona. I don’t usually explore stadiums but it would be a nice change if you’re traveling!

This is the great place to spend your time with your love one. Barcelona the city of LOVE. The places are so amazing. I would really love to visit one day.

It’s really cool that you got to visit the Olympic arena in Barcelona, I remember watching those games live.
XO, MJ
https://www.lush-fab-glam.com

I have competed in the Junior Olympic games, this would be wonderful to see! thank you!!

I think I should visit this place! That is so huge! And it is so amazing to witness such event