Since we missed our flight to Lanzhou so we had to spend half a day in Beijing. We visited Beijing Olympic Park also known as Bird Nest due to the circular shape of the stadium which represent heaven. There are two interesting architecture in the Beijing Olympic Park, the Bird’s Nest -the National Stadium and the Water Cube – Beijing National Aquatics Center. 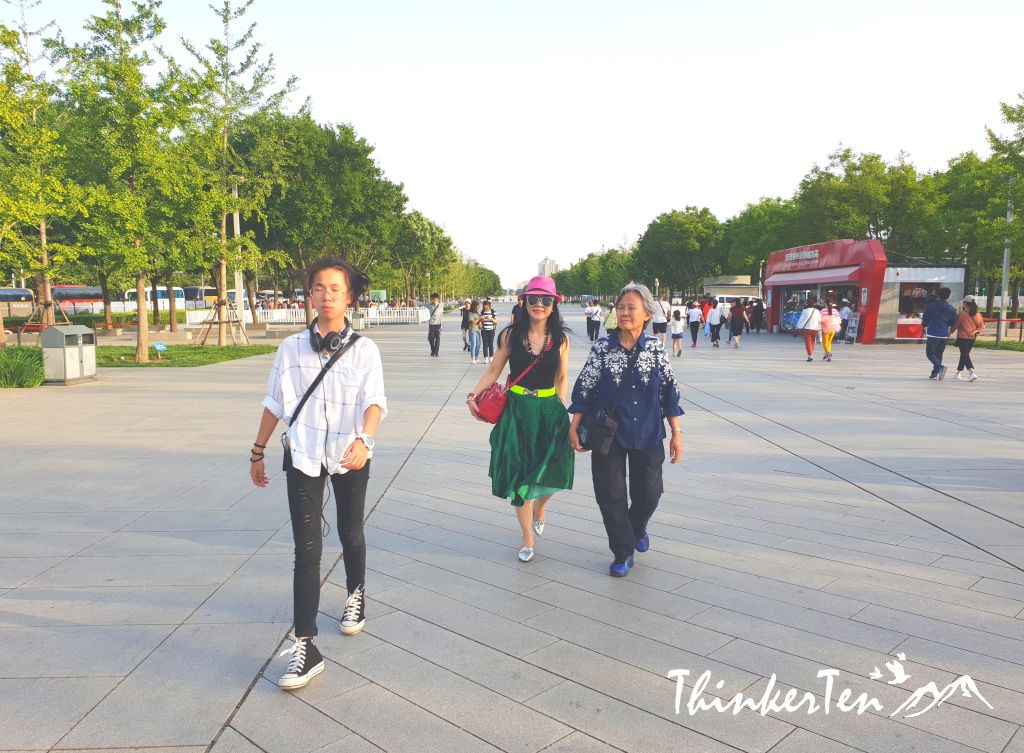 Largest Steel Structure in the World

The Bird’s Nest was built for the Beijing Olympic 2008, ten years have passed and now this place is more for the tourist to visit. Like the Eiffel Tower in Paris – an architectural wonder; Beijing Bird’s Nest was a metal mega-project. An iconic image of city of Beijing, this architecture is a symbol of technological progress, which took 5 years to complete and was constructed using 42,000 tons of steel, making it the largest steel structure in the world.

Fuwa mascots still can be seen in the Olympic Park!

Fuwa is the Beijing Olympic 2008 mascots which represent four of China’s living animal treasures, the Panda, the Tibetan Antelope, the Swallow, the Fish and the Olympic Flame. In total there are 5 mascots named Beibei (Blue), Jingjing (Black), Huanhuan (Red), Yinggying (Yellow), and Nini (Green).  Tourists are still very keen to take pictures with the Fuwa mascots before going into the stadium. 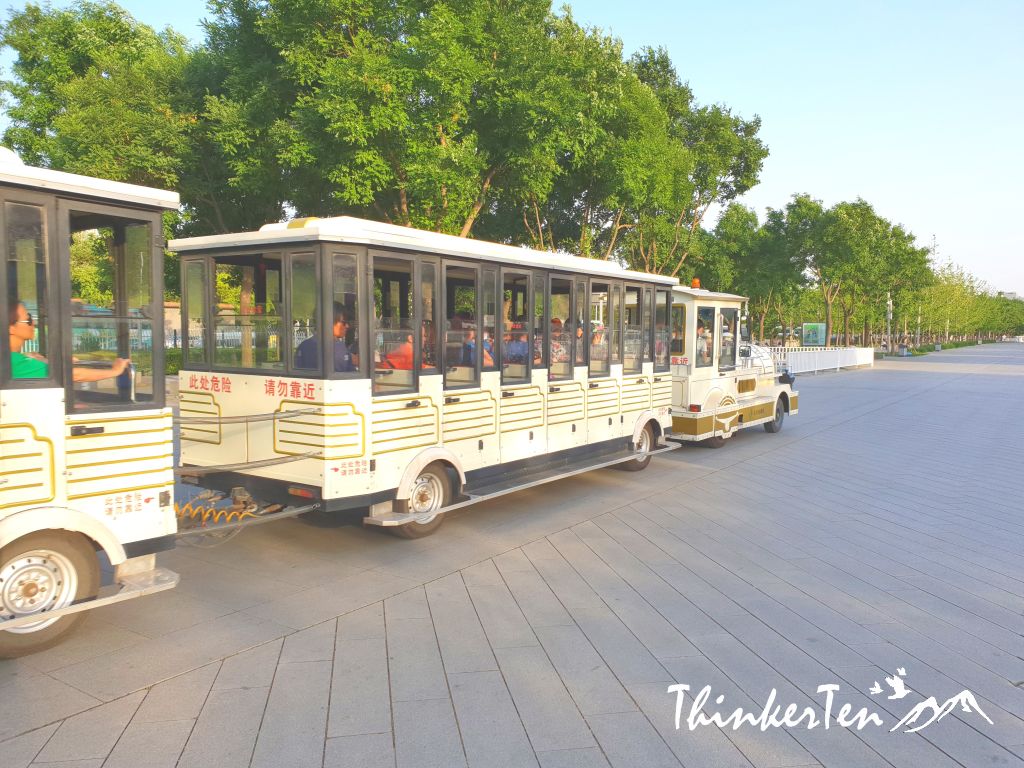 The stadium is currently used mostly for football matches and some big concerts. In 2022 Winter Olympic, it will be used again. Hence Bird’s Nest Stadium will be the only stadium to host both the Summer and Winter Olympics and Paralympics opening ceremonies.

Best to visit at Night

Water Cube 水立方 is another iconic site worth visiting in the Beijing Olympic Park, it is about 10 mins walk from the Bird]’s Nest. Try to visit both sites in Olympic Park in the evening, that way the sun is not that hot as there is little coverage for this big complex. Another plus point to visit in the evening is you are able to catch the night lit up for both buildings. 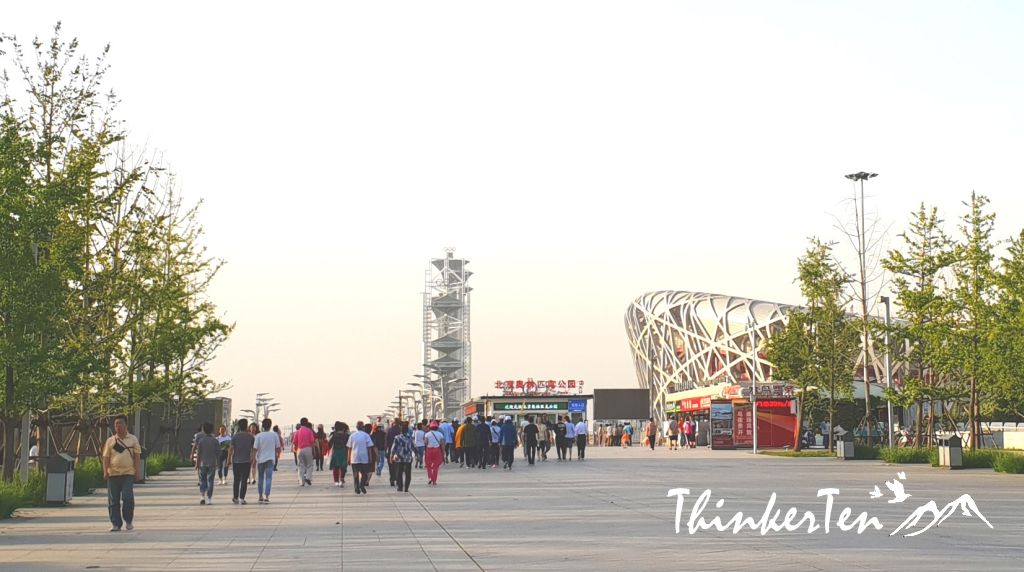 There are a few stores selling souvenirs, snacks, and drinks. I bought a bottle of Beijing yogurt drink which is one of the specialties of old Beijing. When you visit Beijing, this is one of the must-try. The packaging seems retro and old fashion (the yogurt is placed in small ceramic jars) but local tourists seem to love it and you can see almost everyone is holding one on their hand. Finally, I couldn’t resist and to solve my curiosity, I have to get one to drink. The texture is thick with milky aroma, light honey-sweet.

What is the difference between the Western version of yogurt? Well, for western yogurt you eat it with a spoon but for Beijing yogurt, you drink it with a straw. While American yogurt is usually fermented, stirred, and then packaged, Beijing yogurt is not stirred and is allowed to ferment in the bottle. 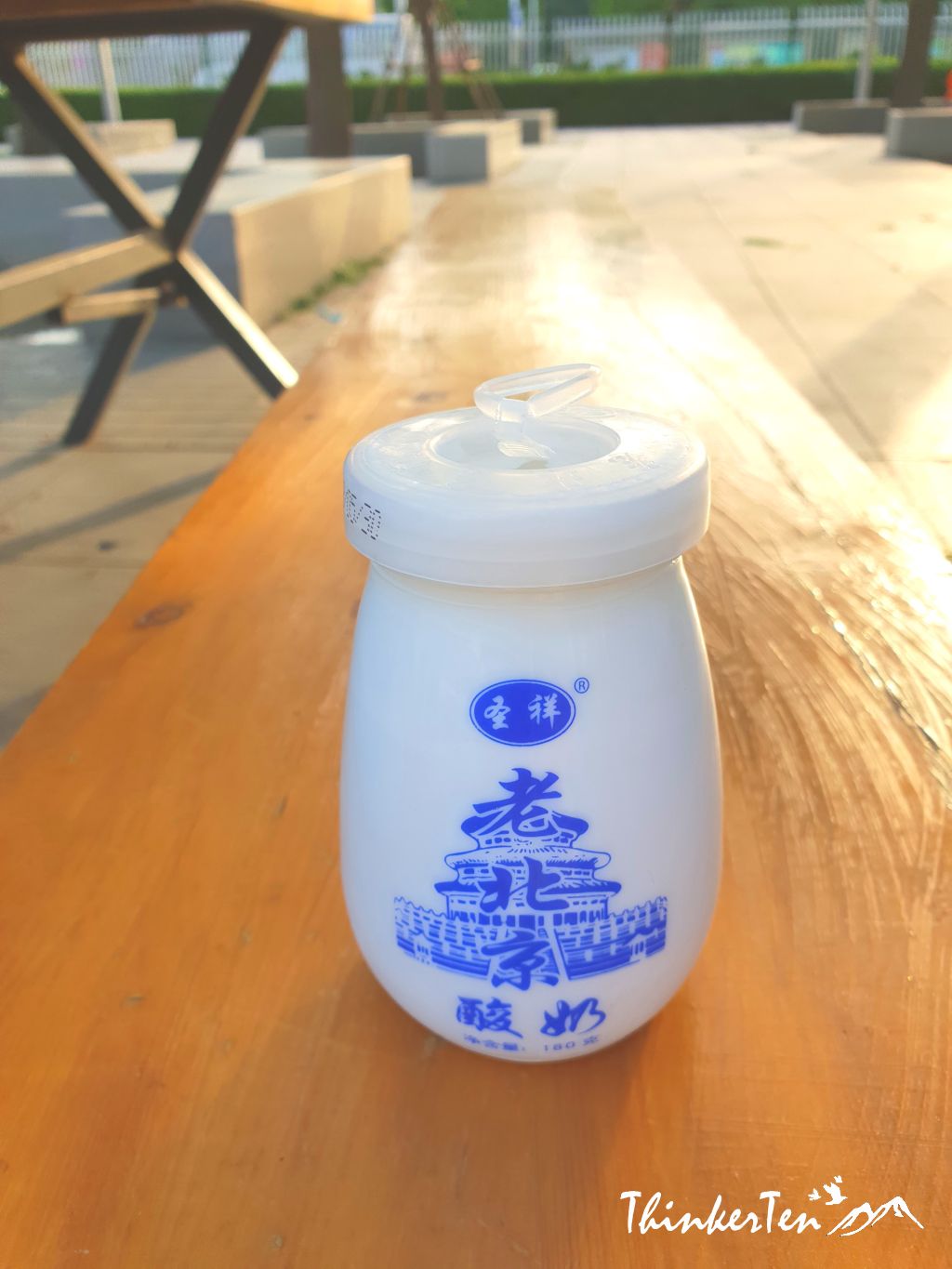 The outside of the Bird’s Nest looks stunning even in the day time. If you have extra time to spend, you may want to visit the interior but you need to pay to get it.

In addition, you can also take your swimsuit with you to swim in the Water Cube swimming pool or play in the water park.

WOW! This is such an amazing place with a unique design thanks for sharing

The Bird’s Nest Stadium is the new icon for the city of Beijing China.

When I was in Beijing, I only got to see the stadium on a short stop while I was on the way to another site. I did not realize how big it was.

Glad you have been to Beijing and I am sure you enjoyed this city.

That’s amazing. I’ve never been to Asia at all but it’s on my bucket list! If I make it to this area I will want to see the bird nest in person. I had no idea it symbolized heaven – so cool!

Asia gets more expensive to travel these days as compared to many years ago when Asia is still poor and things are cheap.

That is such a cool structure! I love the design of it. I would love to see it in person.

The steel structure of the National Stadium is one of the world’s sports buildings with the largest span. Pretty interesting design indeed.

Such a unique piece of modern architecture! Have admired it since it’s big reveal. So great that you had the opportunity to see it in person!

Thanks for your comment. I was lucky to have seen it in person, really an awesome architecture.

wow, i have never heard of this. def something to see if you’re in Beijing travling and site-seeing.

The Bird’s Nest Stadium is the grand opening for Olympic 2008, almost 10 years have passed. Now it is used for big concerts!

This is a pretty cool stadium! Thanks for sharing your trip to Beijing with us.

The architecture of the Birds Nest is really cool, also claimed to be the largest steel structure in the world.

I would love to see this in person. They Olympic stadiums are always so amazing!

The Olympic stadium will held the winter Olympic 2022 so it will be used again.

I LOVE Asia! I’ve traveled to various countries several times, but never to Chine. It’s definitely on my list and looking at your pictures makes me want to go there even more!!

China has so much to offer, it is so big and Beijing is the great place to start.

This is on my bucket list of travel locations, I cannot wait to visit

Omg so this is the first time I’ve ever heard of this structure!!! So neat that you saw it in person