Valley of the Kings is the most important archeological sites in Egypt. The valley lies on the West Bank of the Nile in Luxor. This is the final resting place for the Egyptian Pharoah. 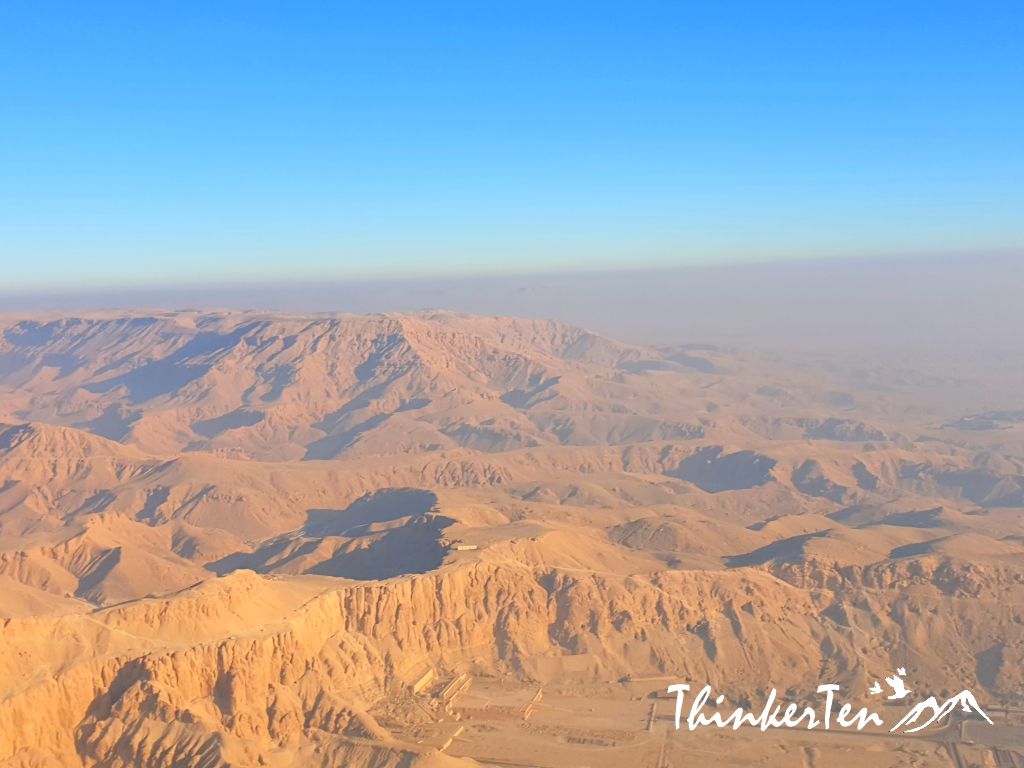 Do you know how many tombs in the Valley of the Kings?

There are over 60 tombs in the Valley of the Kings but not all are opened for the public. Unfortunately, most of the treasures inside were looted thousands of years ago so there was nothing much left. However, the murals and hieroglyphs that cover the walls of the royal tombs provide an invaluable insight into the past of Ancient Egyptians. 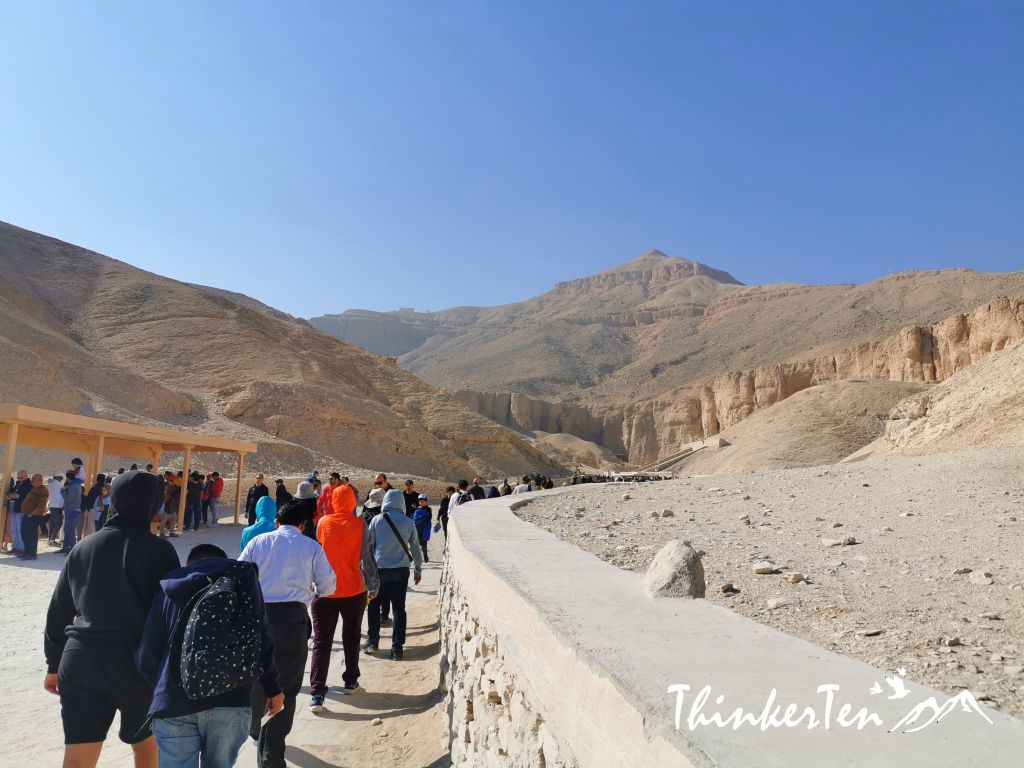 Our tickets allow us to visit 3 tombs. It cost EP 240/USD 15.00. The tombs are labeled as KV1, KV2, …till KV60. KV stands for Kings Valley. Most tombs look the same so visiting 3 tombs is more than enough unless you are really into tombs.  Please keep your ticket well as they do check at the entrance of each tomb.  They will punch a hole at each entrance. 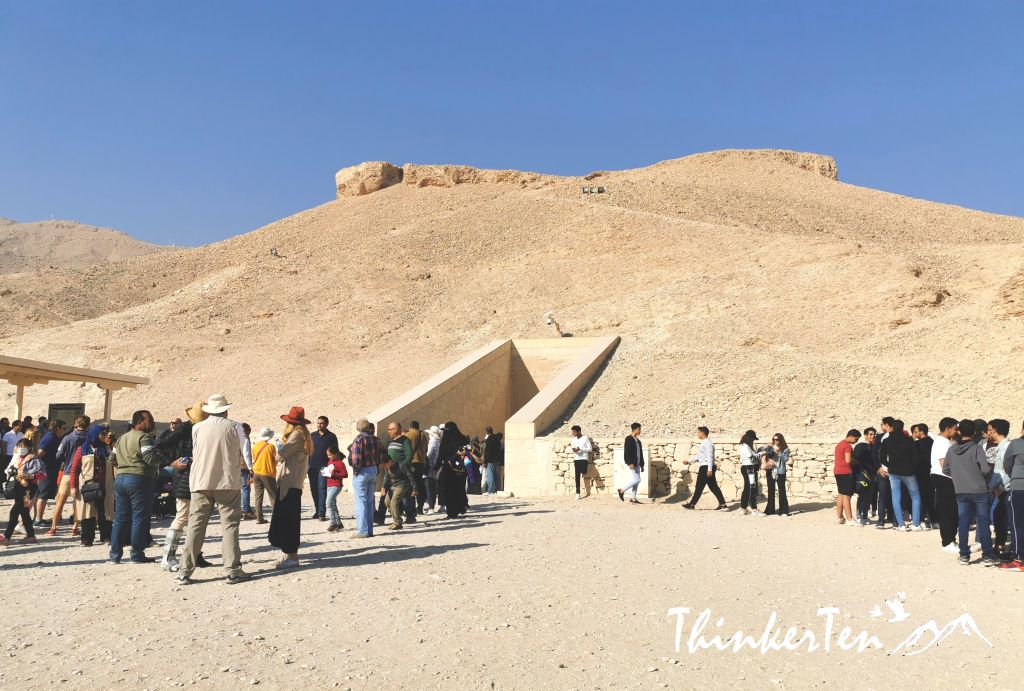 The three tombs we visited are:

There are three additional tombs that you can visit with an extra ticket. Here is the list with the additional price for each tomb. 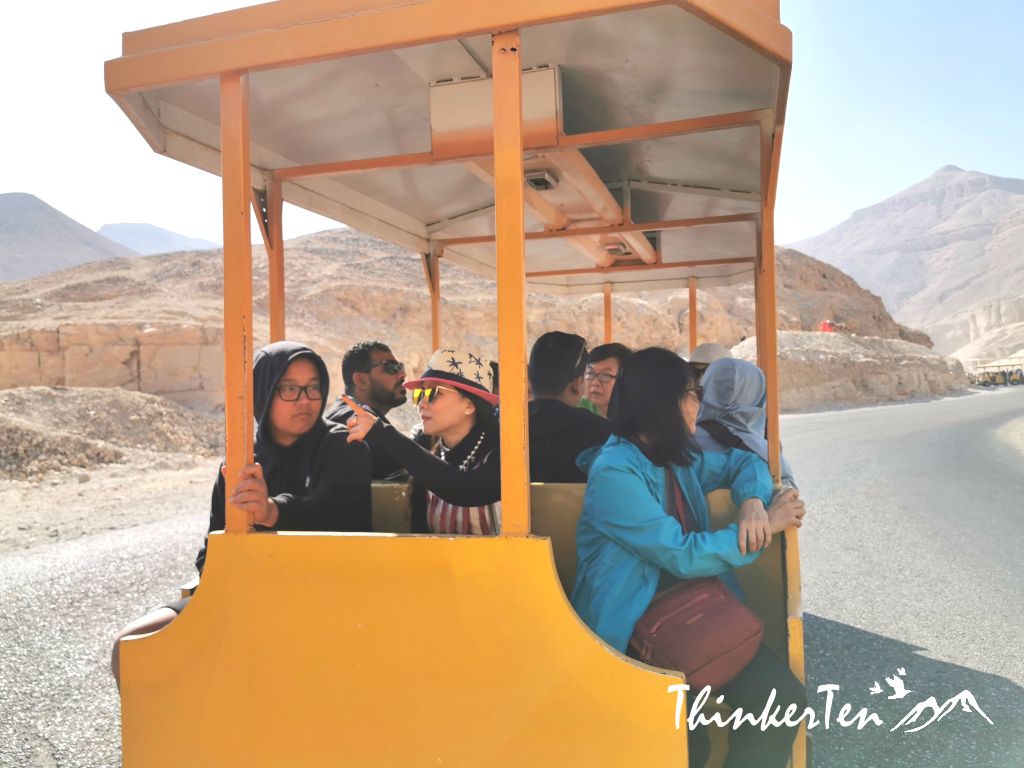 Leave your big camera in the bus

The big camera is not allowed in tombs but phone camera is ok to use.  If you have a big camera, it is advisable to leave it on the bus.  Do not even bring along as they will check the bags too. 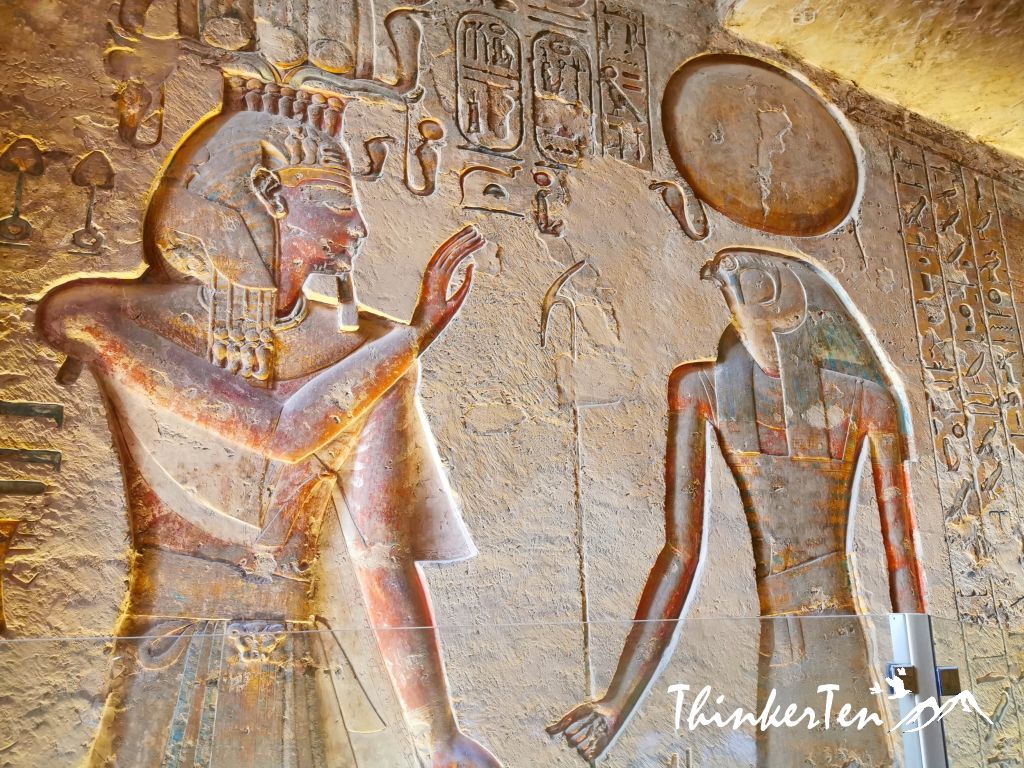 It is quite hectic as the crowds are huge and all tombs have a very long queue. The first tomb we visited is KV11 – the tomb of Ramses III. This particular tomb is called Tomb of the Harpist. Very colorful. You should look for the harpist on the mural.

KV6 – the tomb of Ramses IX

This tomb has a stunning ceiling so you should lookup. 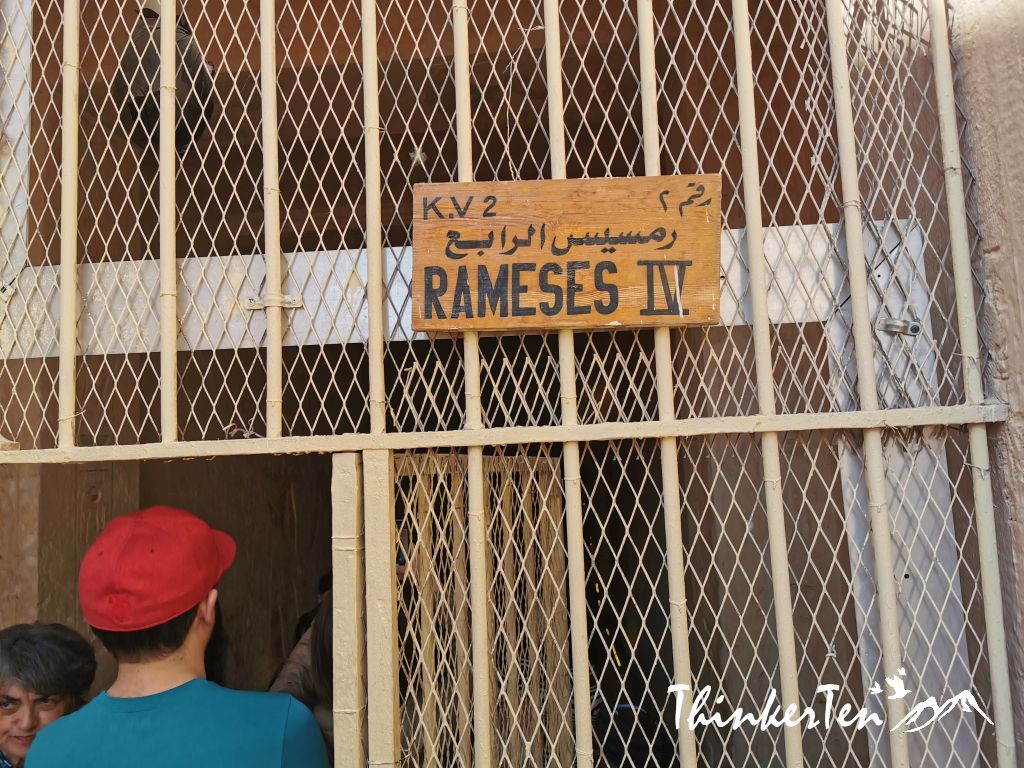 The corridor is not very long because the Pharoah did not rule very long and die at an early age. You will see the print of sarcophagus or coffin on top of the ceiling. 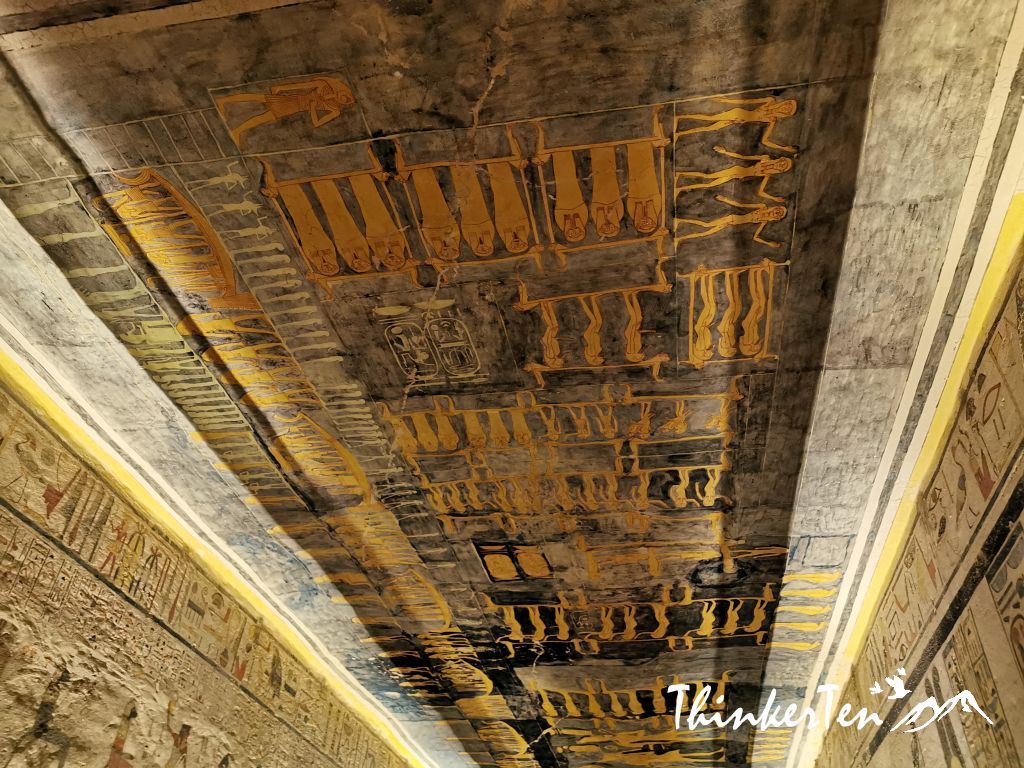 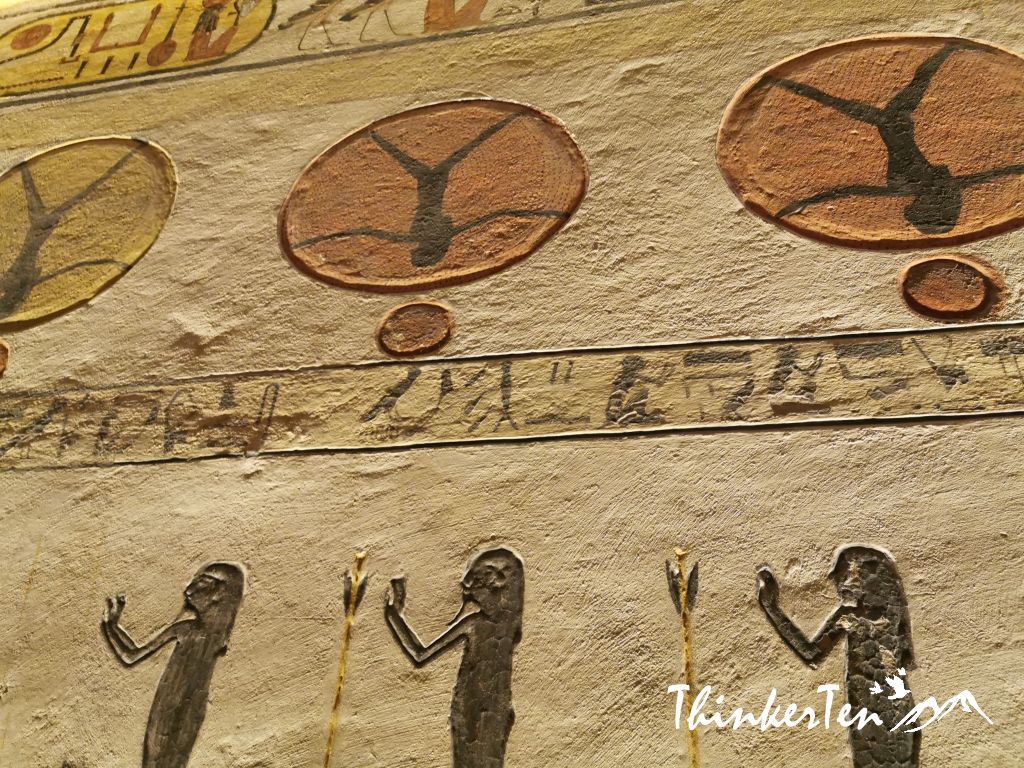 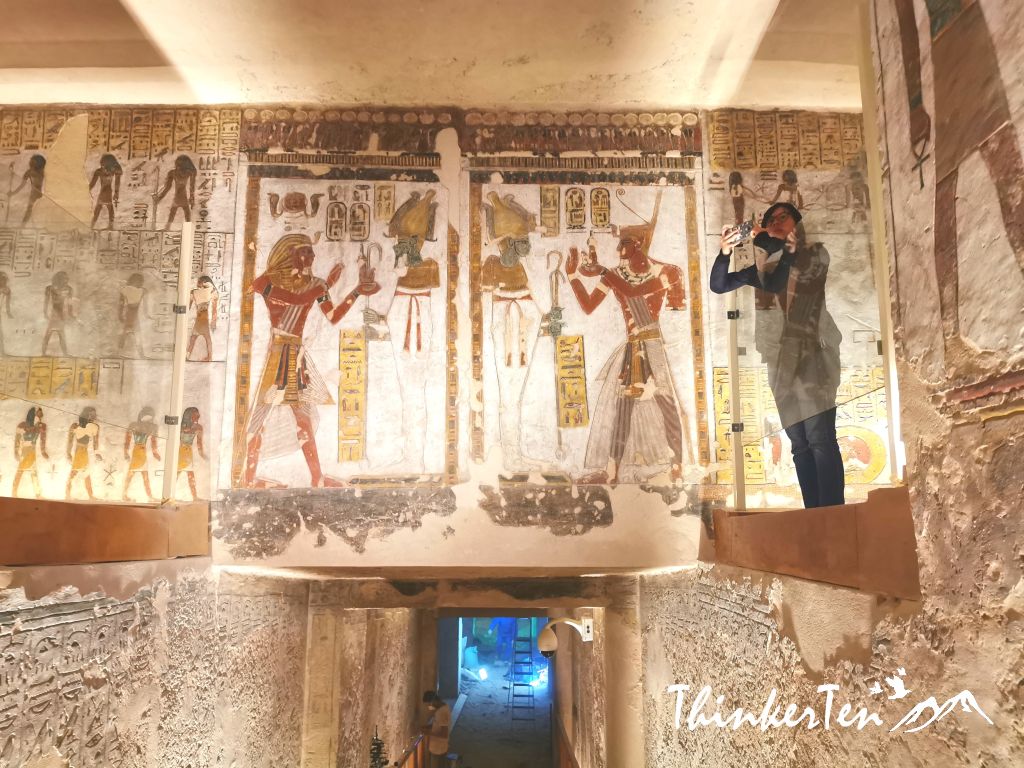 In several tombs, the murals are protected by dehumidifiers and glass screens.  Please do not try to touch the wall as it will cause harm to the beautiful murals.

The Kings Valley is situated in the mountain in the desert, extremely hot. I was here in the winter month of December, I can still feel the heat. 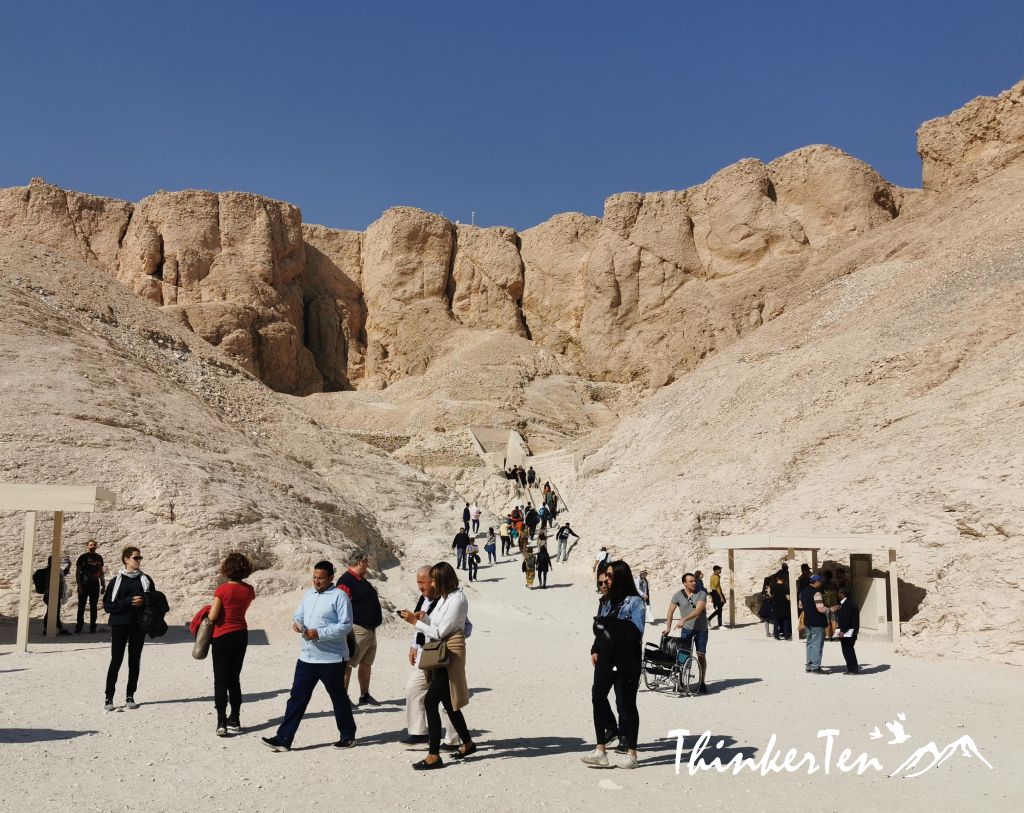 The most recent discovery was King Tut’s tomb (Tutankhamun) by the British archaeologist named Howard Carter in 1922. The tomb was very famous because it has fabulous treasures found inside the tomb and all untouched. All the treasures inside the tomb of King Tut have been moved to the Egyptian Museum in Cairo so there is nothing left inside. What remains inside the tomb was  King Tut mummy.  Additional 300 EP to get in. 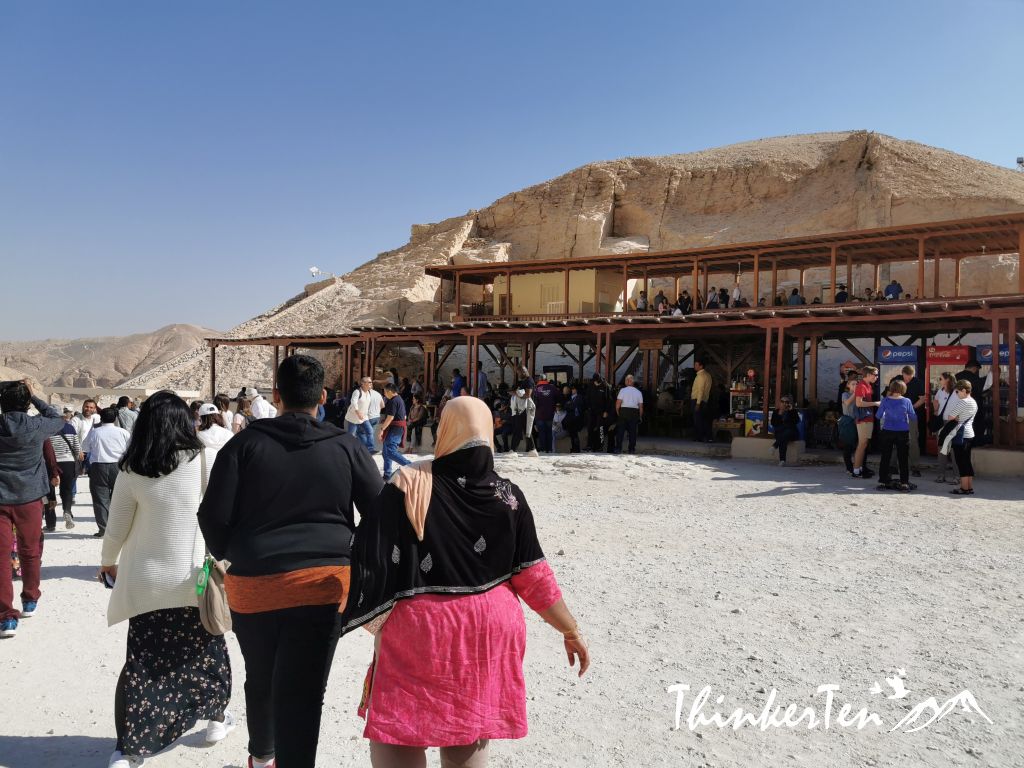 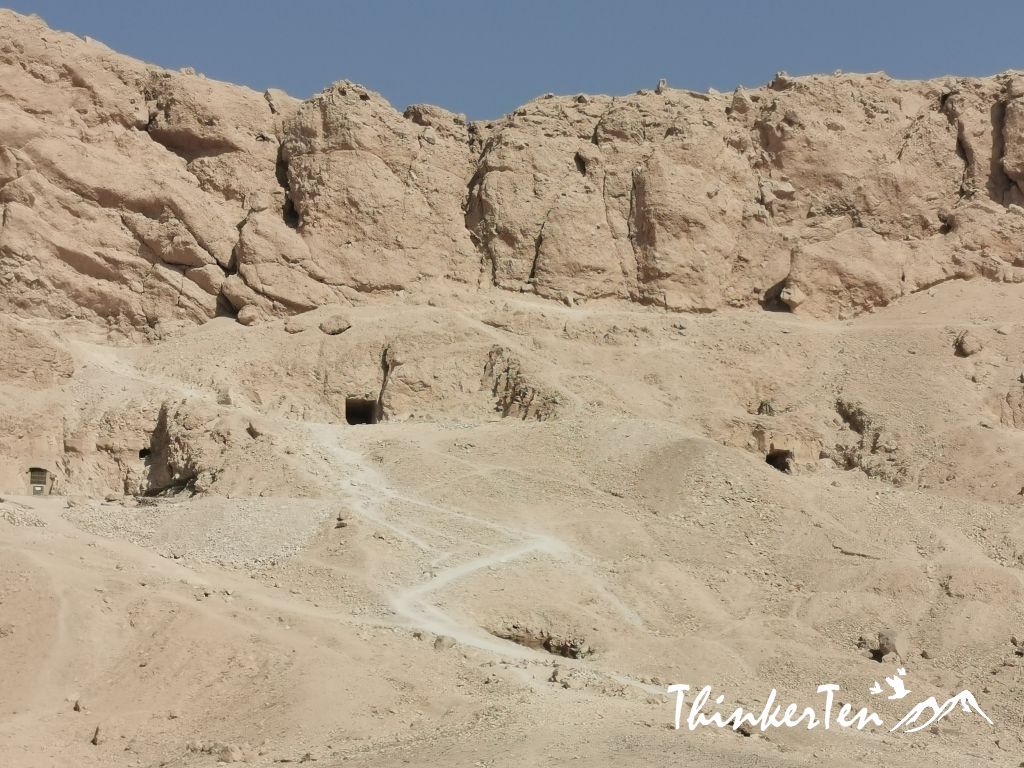 Although ancient Egypt and China never communicated with each other, they had many things in common.

I have visited the tombs in Xi’an China so I like to do some comparison here.

These two civilizations seen as the world’s earliest ones developed numerous similar inventions, institutions, and traditions – not only concerning instruments of daily life, but also religious rites like the death cult and other religious concepts. 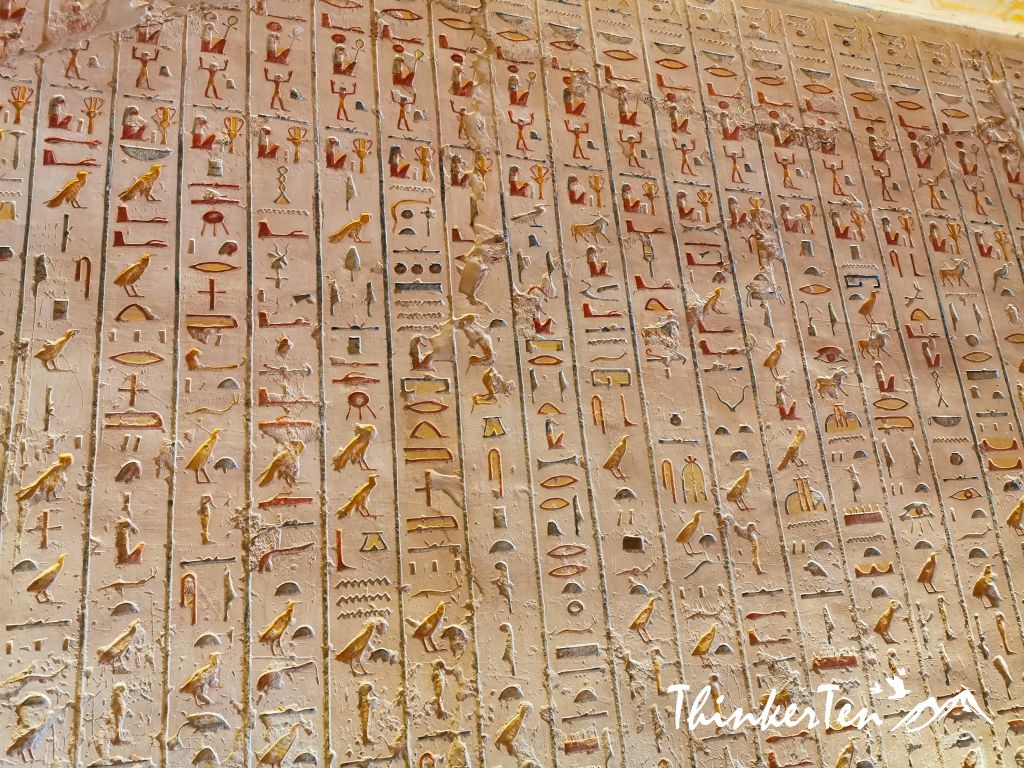 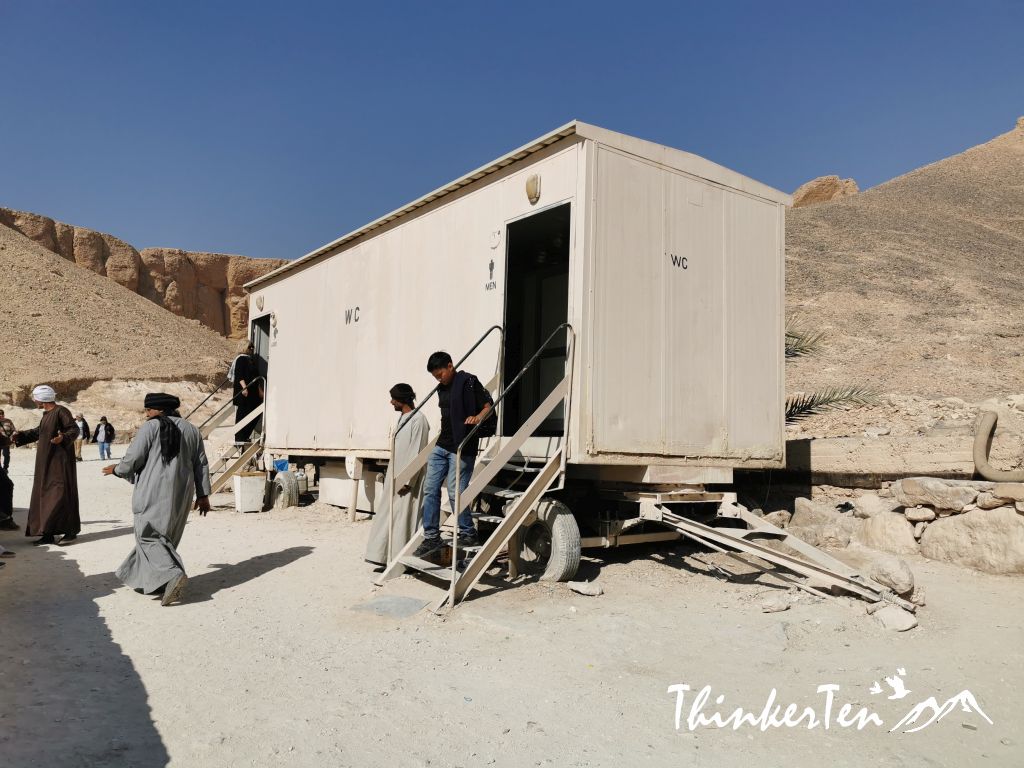 Visiting the world’s largest archeological sites was simply an amazing experience. The Valley of the Kings sites are huge but there are trams to bring you up the mountain. We visited 3 tombs and I think it is more than enough. There are over 60 tombs here but I get tired just after 3 tombs.  The queue to enter the tombs is long too.

My final conclusion is the ancient Egyptian and Chinese share lots of similarities, just by looking at the building of the tomb itself, both took their tombs building seriously and well-prepared for their afterlife. 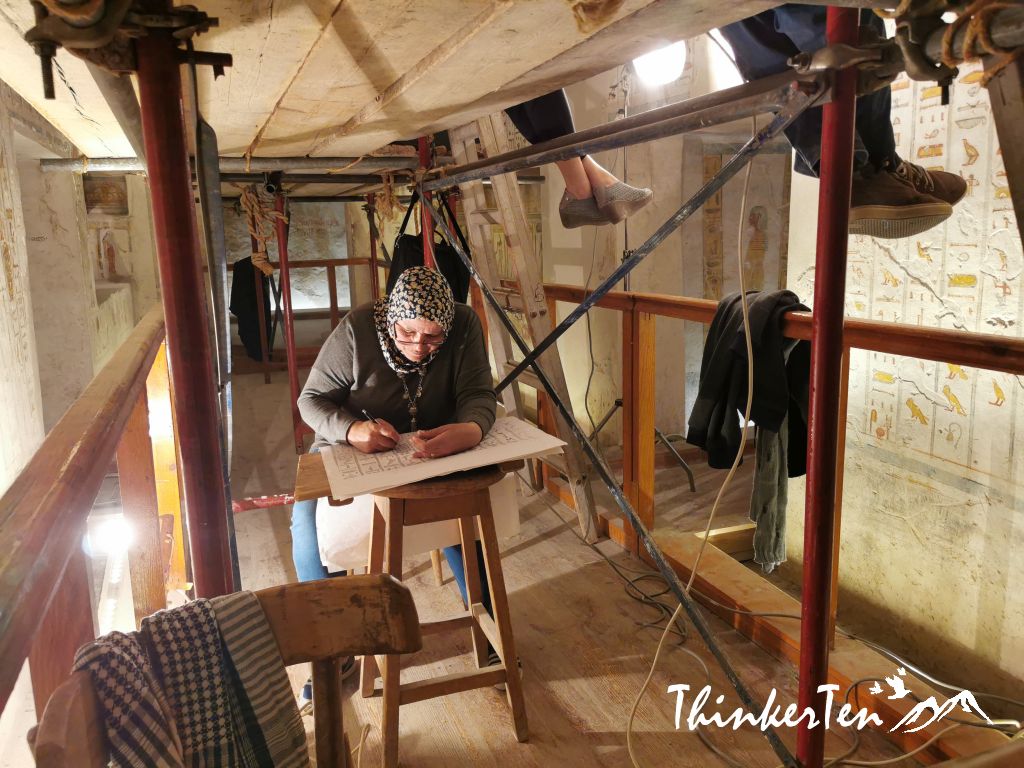 12 Things about Luxor Temple in Egypt

I have always been fascinated by the Valley of The Kings, all your images are absolutely stunning! Definitely somewhere I need to visit! Sim x Sim’s Life

I’ve always wanted to visit Egypt. Your photos make me feel like I’m already there.

What an incredible travel experience. We would love to visit Egypt!

It seems like you had a lovely time. I can’t wait to visit Egypt.

I grew up reading lots of books about the Valley of the Kings but never have had a chance to visit it in person yet. Surprised to find out that there are 60 tombs there

I have always wanted to visit Egypt and when I do I will make sure to visit the Valley of the Kings. The picture you took are beautiful.

I used to want to go see this place, what a fabulous location. I love Egypt, it’s so fascinating to me.

This looks like an amazing journey I’d love to take one day.